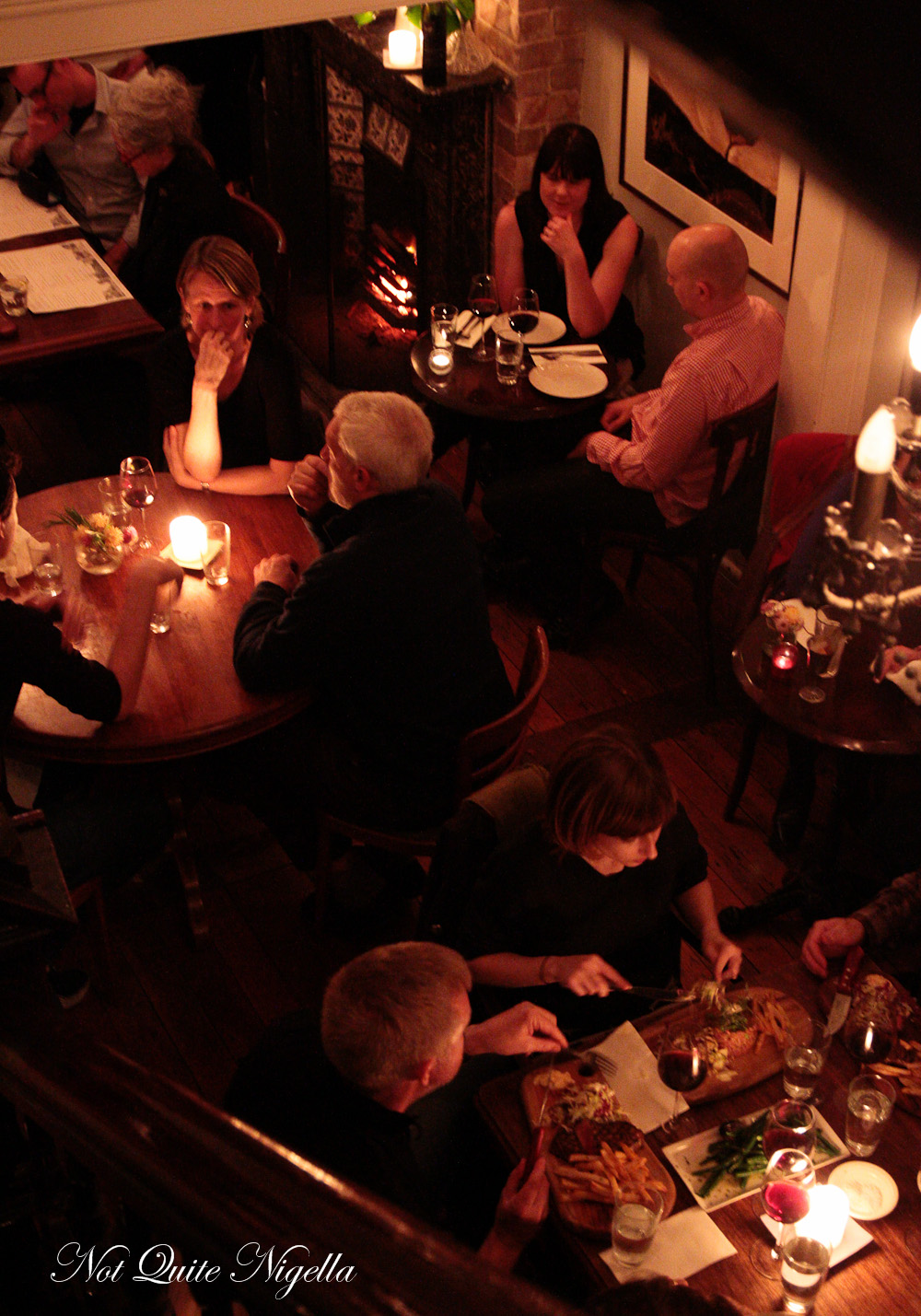 How many restaurant can boast of being spiritually cleansed? It's perhaps more relevant for buildings built in the 1850s. When owner Justin Windle first walked into the space, he felt that a presence so he called upon a spiritual cleanser who came bearing comfrey sage. Interestingly, the spirit cleanser reported finding a spirit upstairs of a woman who was waiting for her son to come back from the war. 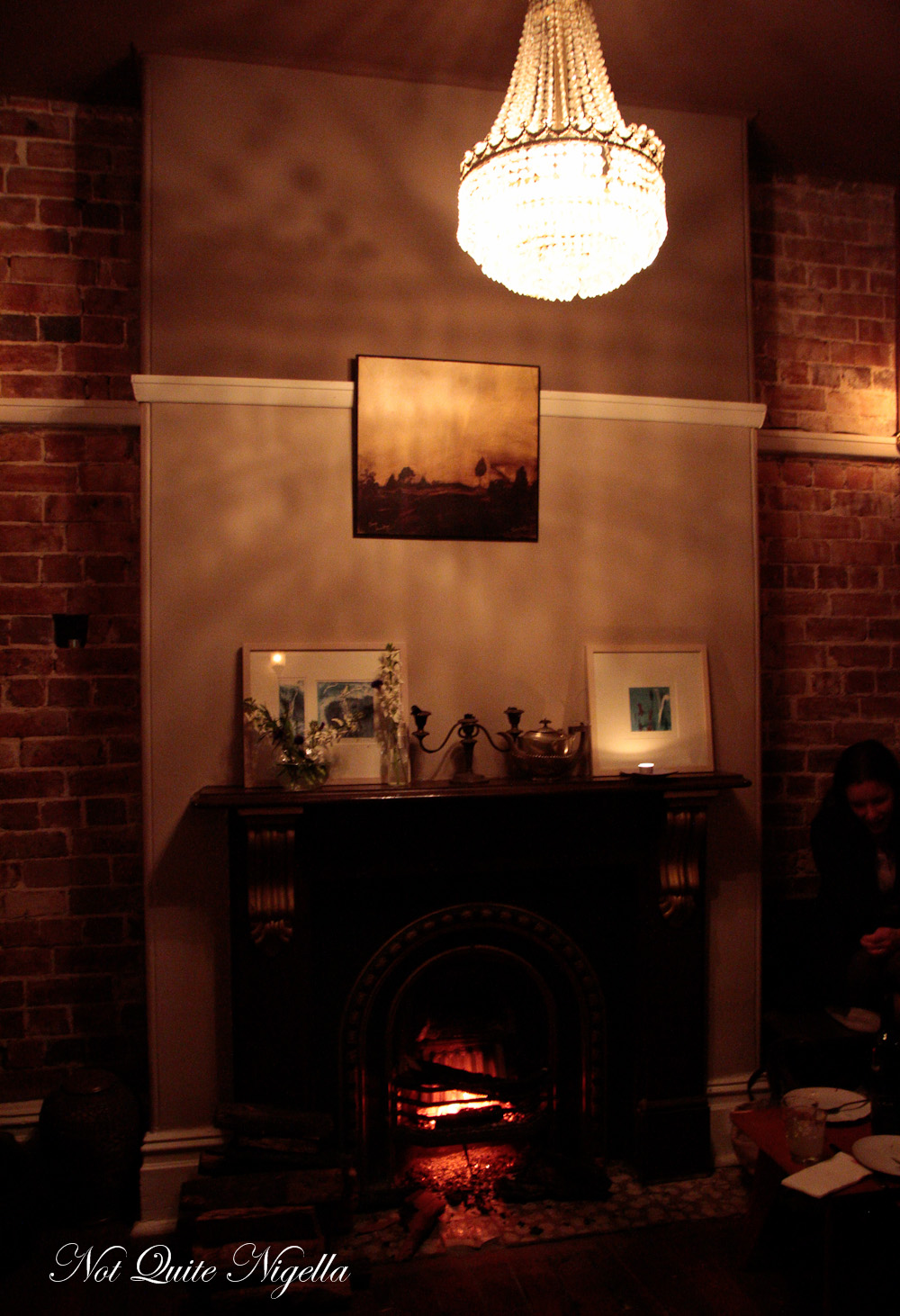 This woman was apparently Hetty. The story behind Alfie and Hetty is an interesting one steeped in history. Hetty or Mrs N. Stapleton was said to be a "sincere and caring woman" and was known around the neighbourhood for her cooking, particularly her delicious roasts. She lived in this building and in honour of her, the restaurant downstairs has a dedicated roast menu. Alfie was the gangster and party boy and despite the differences, the two were good friends. He also lived here running the speakeasy in the upstairs portion of the house and the bar is named after him.

Hetty lived in this building until she died while waiting for her son to return from the war. Although we don't feel any spirits (perhaps the cleansing did work!) it's nevertheless a welcoming place on a cold Friday night where Queen Viv, Miss America and I are celebrating Miss America's birthday. 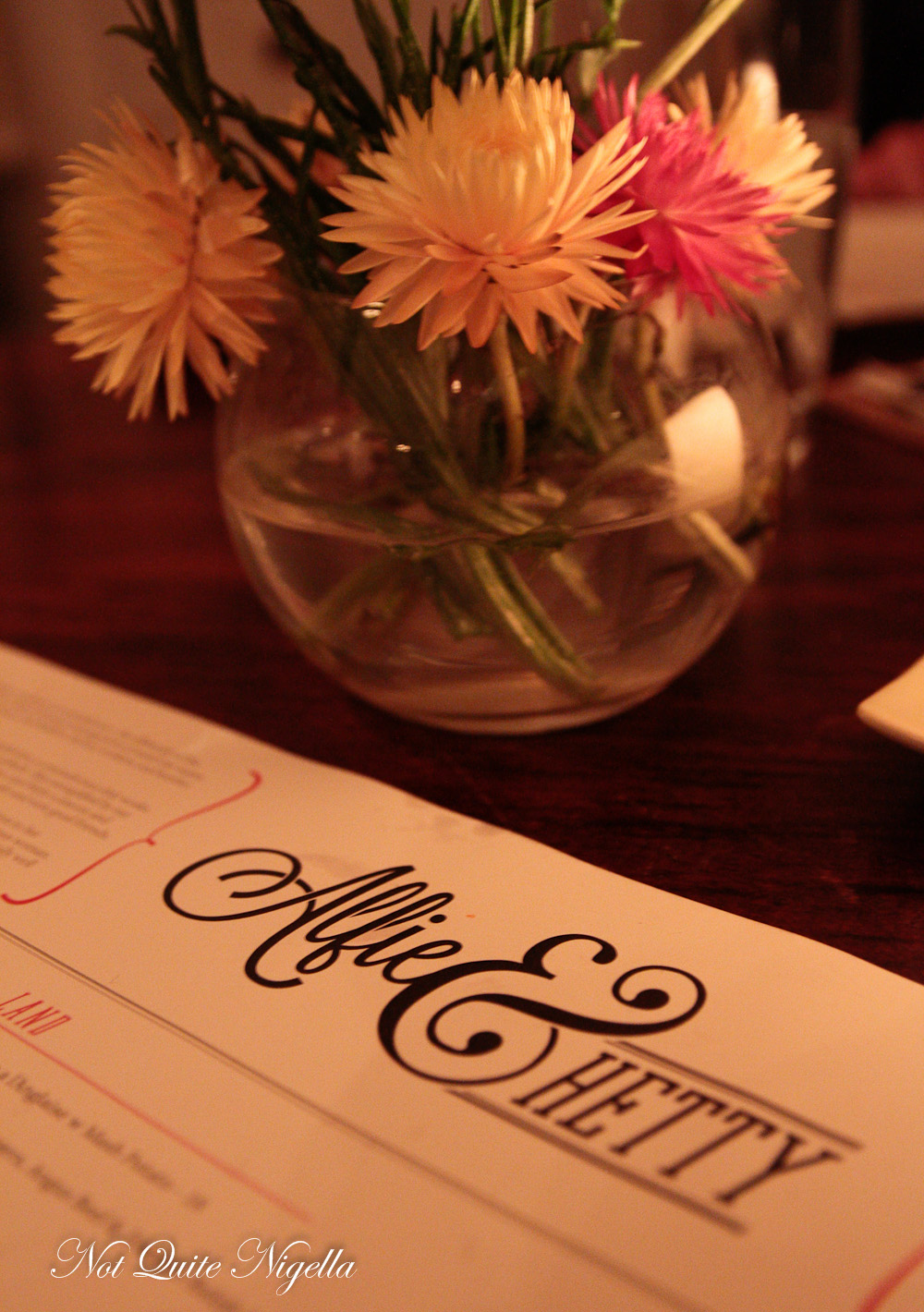 At first we have a drink upstairs on the lounges in front of a crackling fireplace. Sydney seems to have retreated firmly back into winter and the bright orange flames and logs are a welcome sight. It's dark upstairs and after a drink we make our way down to the restaurant or Hetty's area. We ask what we should order and we're steered by the owner who actually recommends fewer dishes that we thought. It all comes out quickly. 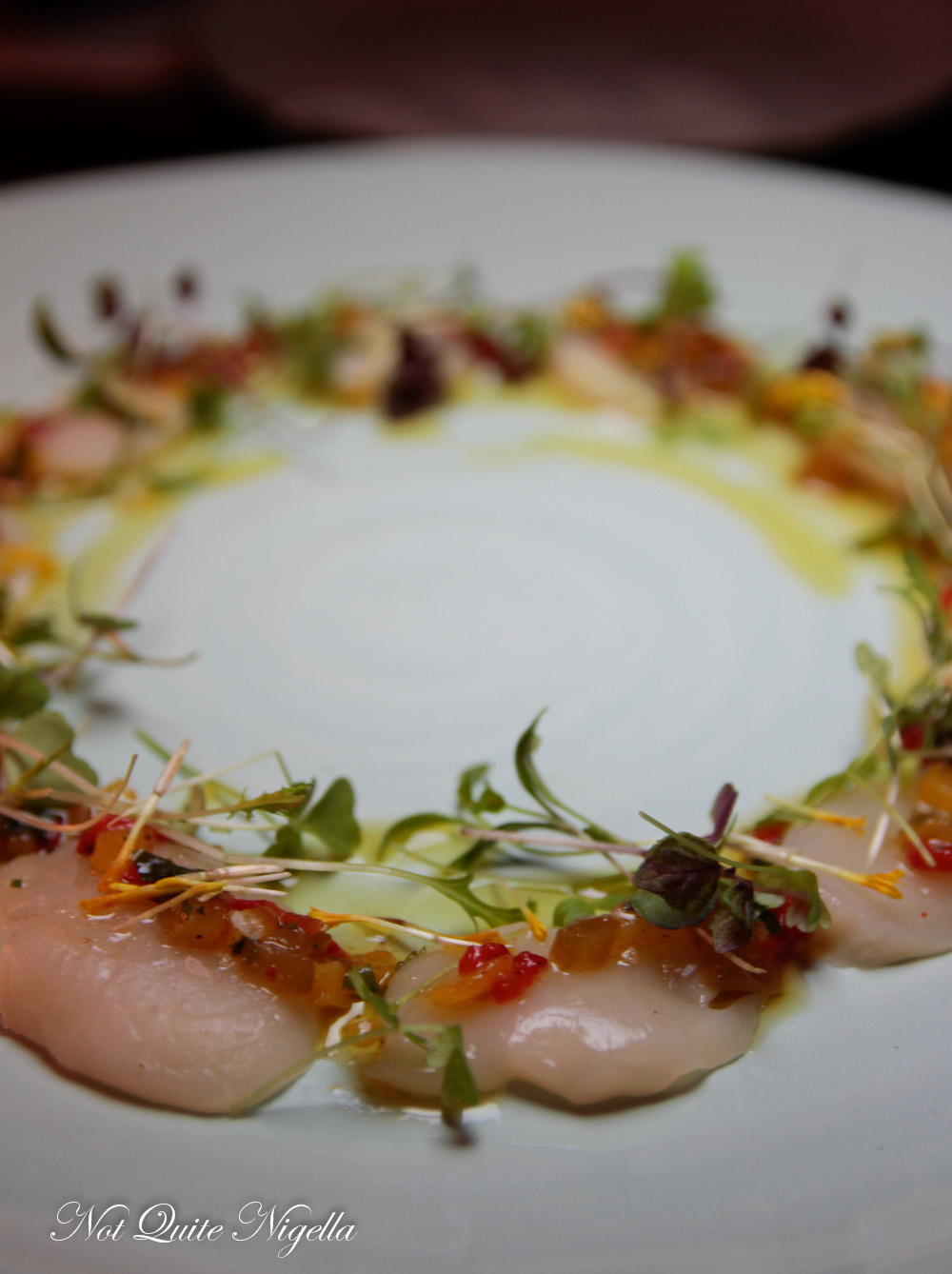 The Canadian scallop carpaccio is silky soft and creamy and it is perfectly matched with a roasted capsicum dressing, fresh herbs and oil. It's simple but perfectly seasoned and pretty as a picture. Queen Viv calls it an angel's halo. 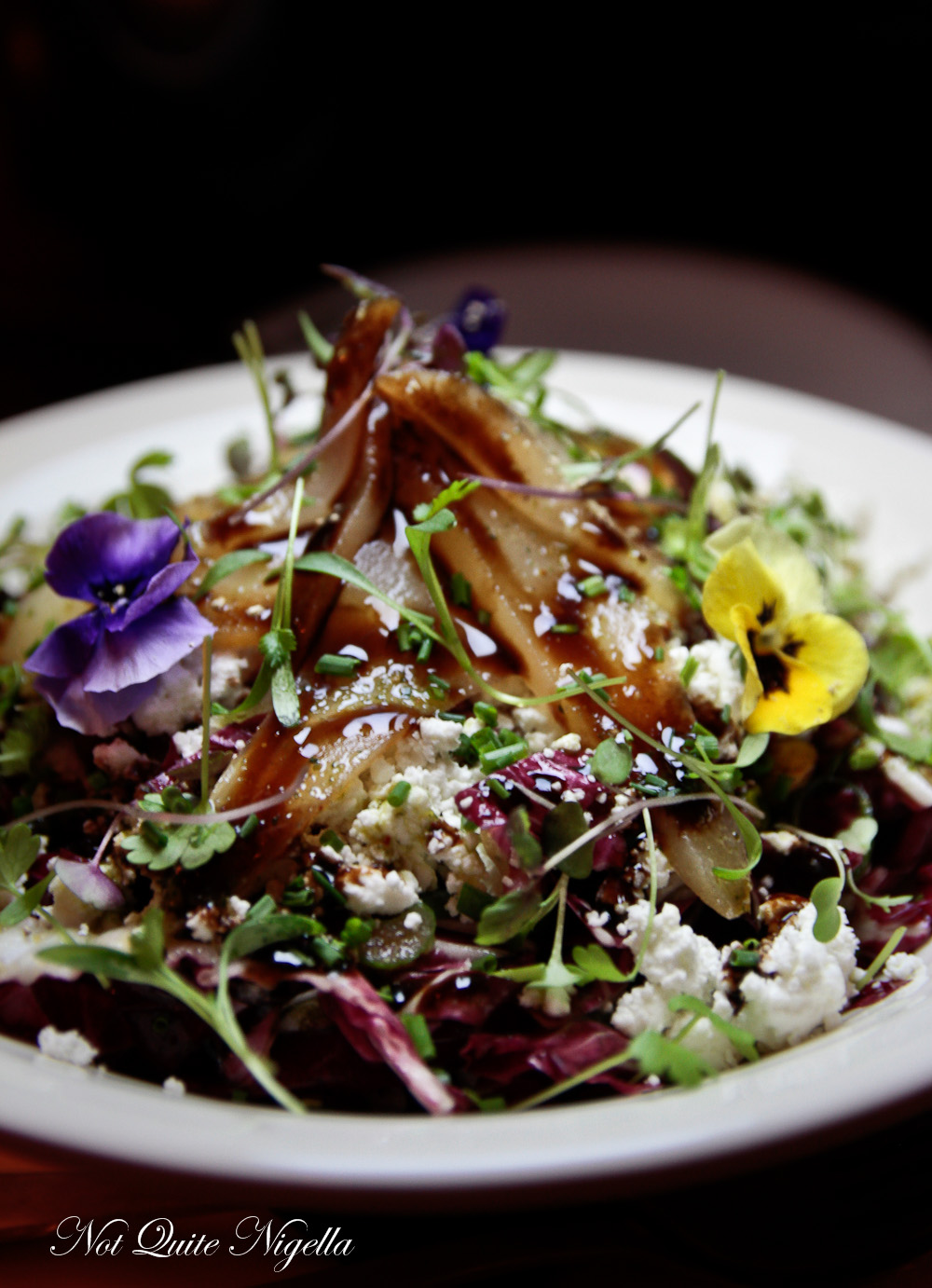 We were recommended the steak tartare-the chef Benjamin Loiseau is from France but Miss America is not as keen as Queen Viv and I on this dish so he goes for the radicchio salad. I'm not usually a radicchio person because of the bitter flavour but I really enjoy this salad as it has a good balance with additional sweetness which mellows the natural bitterness of radicchio. A vanilla poached pear is served fanned on top of the salad along with meaty pistachios, tiny dots of goat's curd and fresh pansies. 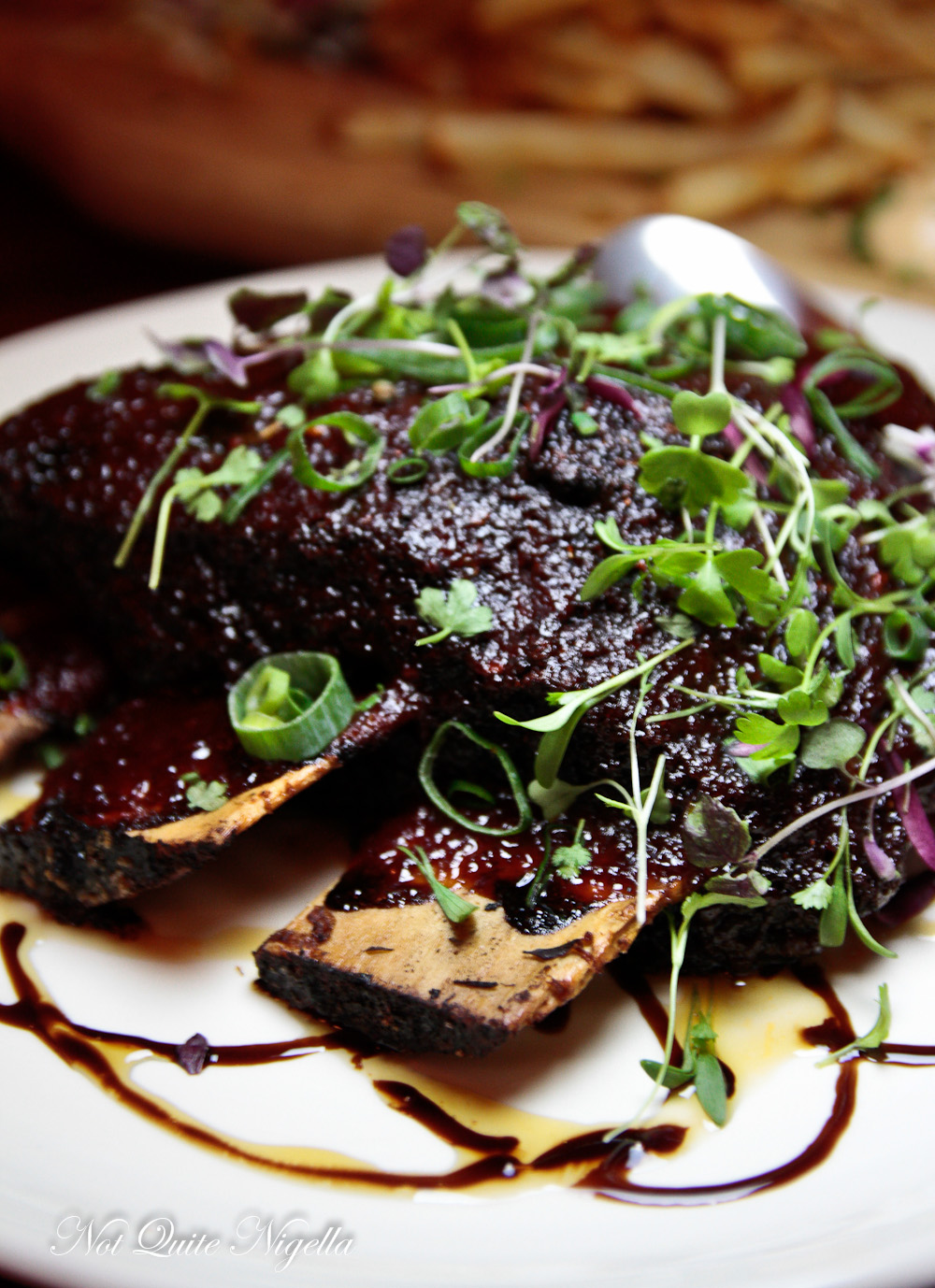 We couldn't go past a roast after reading about Hetty's famous Sunday roasts from last century so we decided to forego the most popular roast (the lamb) to try one of the newer roasts. The beef short ribs require a total of four days to prepare. The process starts with the ribs being braised in beef stock for 14 hours and then the next day a dry rub with coriander, lemongrass, chilli and garlic is applied. After that they add a glaze to the ribs which is made up of molasses, chargrilled capsicum, tomato, turmeric and sumac which it lies in for 24 hours and the final touch is two hours in a high oven to finish it off. 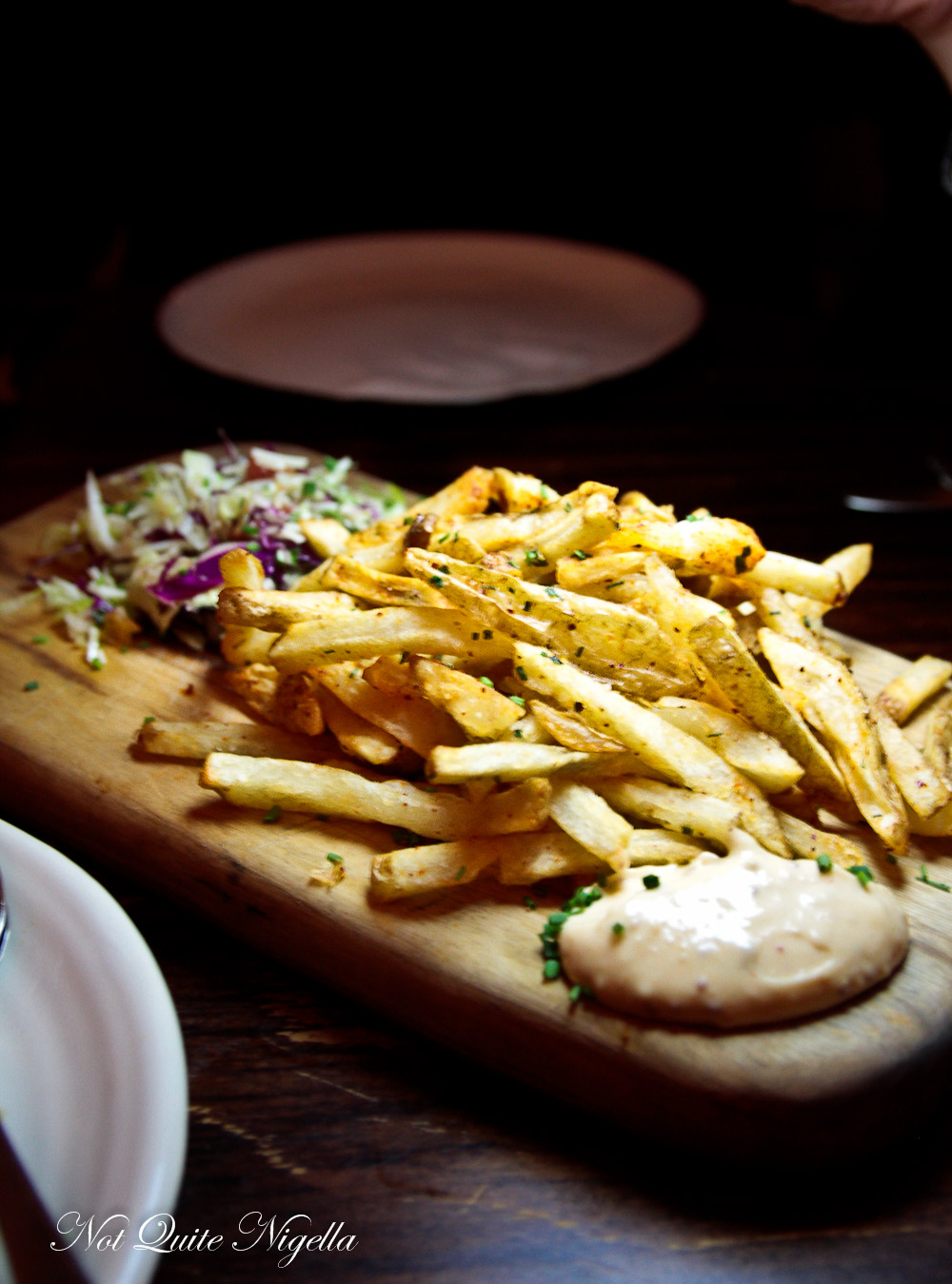 The result? Delectably soft, fall apart beef short ribs with layers of flavour. It's served with triple cooked hand cut chips, coleslaw and a garlicky aioli that is strong but never acrid with garlic. And if you're a real roast lover, large groups can apparently book a turducken (that behemoth roast consisting of a turkey stuffed with a duck stuffed with a chicken). 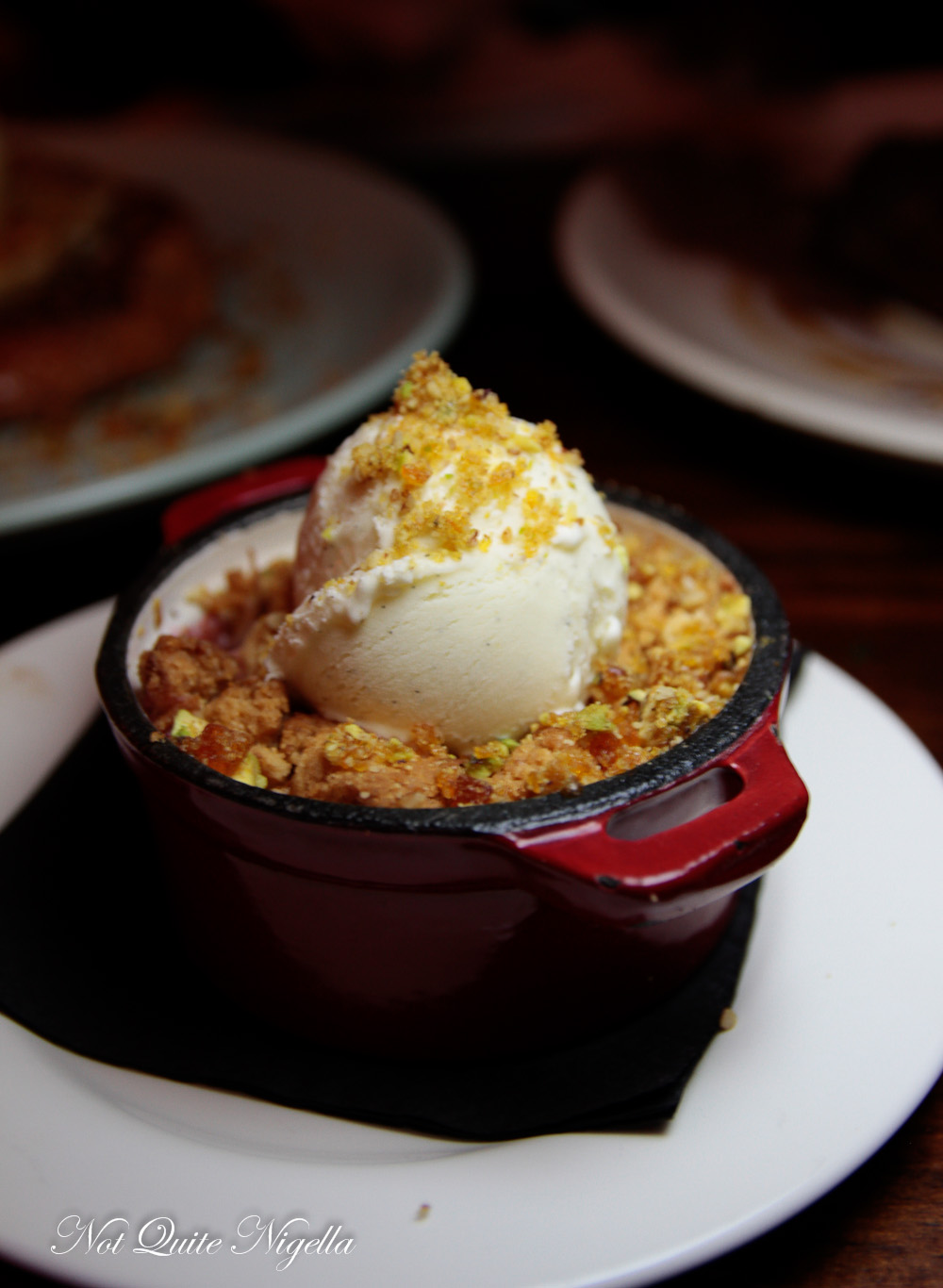 Although we're full to stuffed, we have to order dessert as it is Miss America's birthday and he adores dessert. Alas, the last Pink Lady apple tarte tatin has just been sold in the last minute so we order the chocolate fondant and the pain perdu instead. When we ask them to put a candle on one they are kind enough to bring out an extra dessert, a pear and rhubarb crumble which has a crunchy, rubbly nutty buttery topping with the rhubarb and chunks of pear with just the exact right sweetness. The scoop of vanilla ice cream on top melts into the crumble. Queen Viv's colleagues received the same when they visited for a birthday prior. 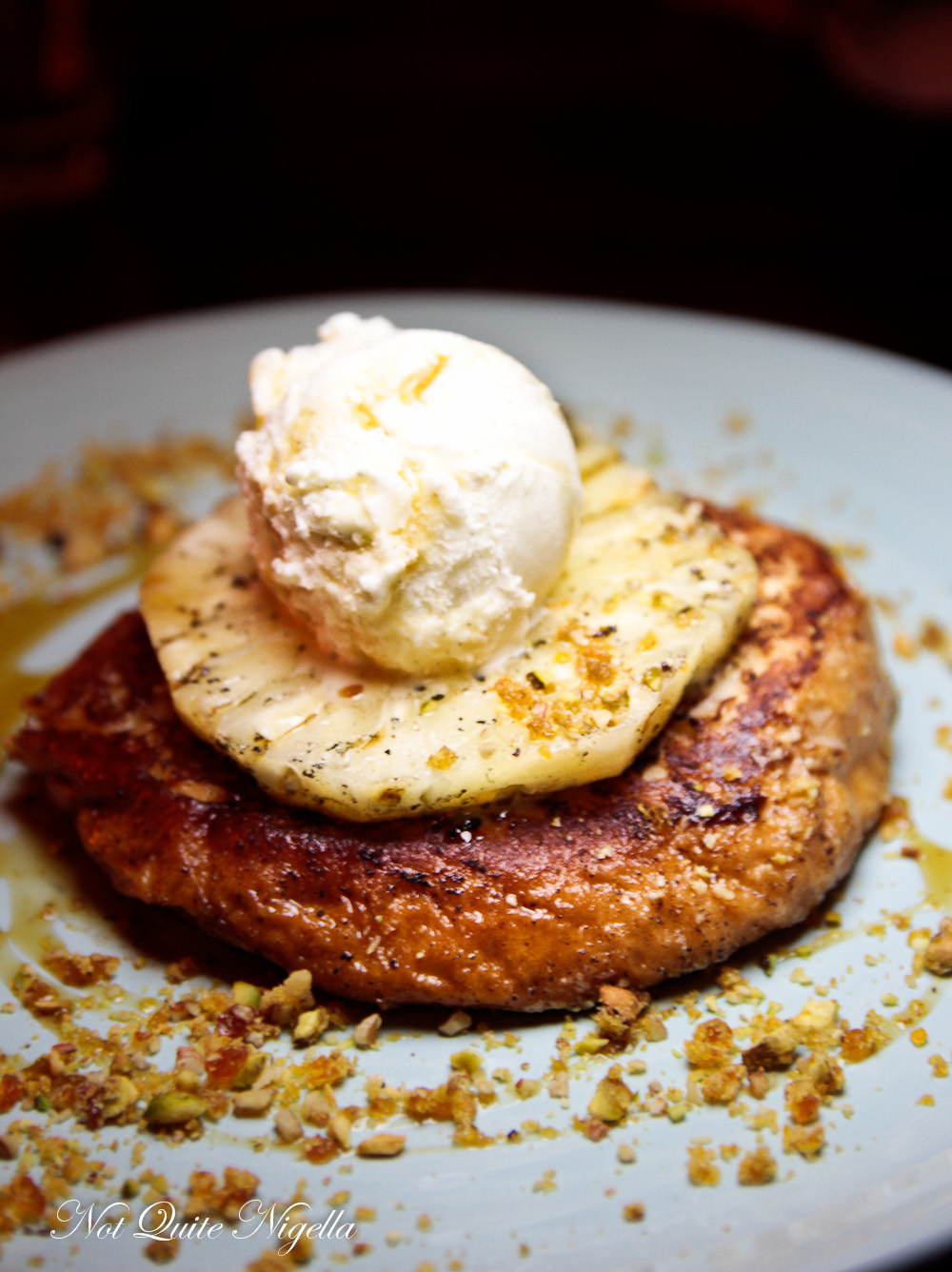 The vanilla pain perdu or French toast is all soft, eggy goodness and as comforting as a hug. It's served with a charred pineapple ring and maple syrup. The only complaint? Only that it probably needs a fork and knife to eat it with rather than the dessert spoons. 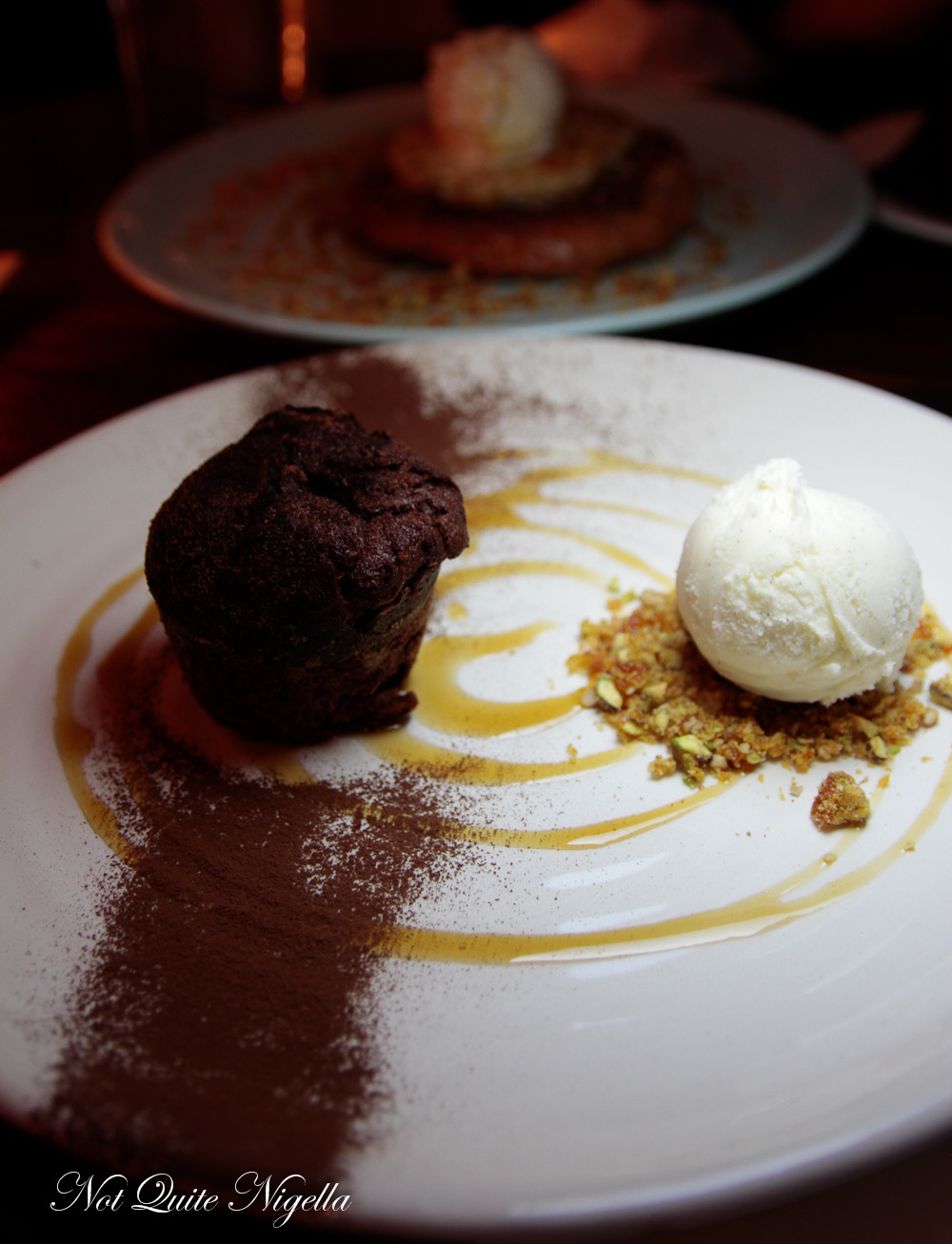 "Can I break it open?" I ask Queen Viv and Miss America to see if I can get a "money shot" photo of the chocolate oozing. And right on cue the chocolate river flows out all dark and liquid which we scoop up along with the dense rich chocolate cake outer. Miss America smiles a chocolatey smile.

So tell me Dear Reader, would you ever spiritually cleanse your house or place of business? Do you believe in spirits or ghosts? 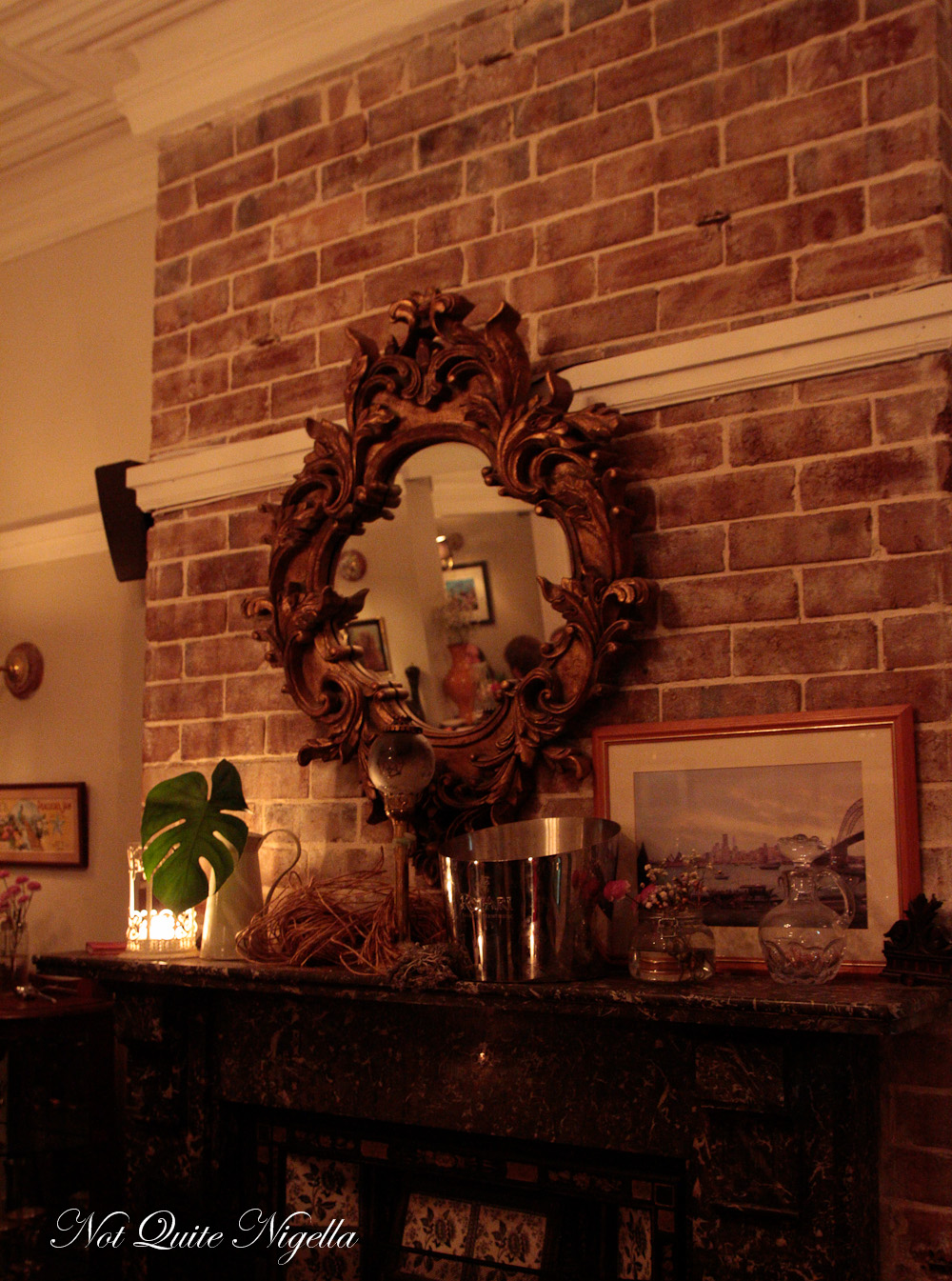 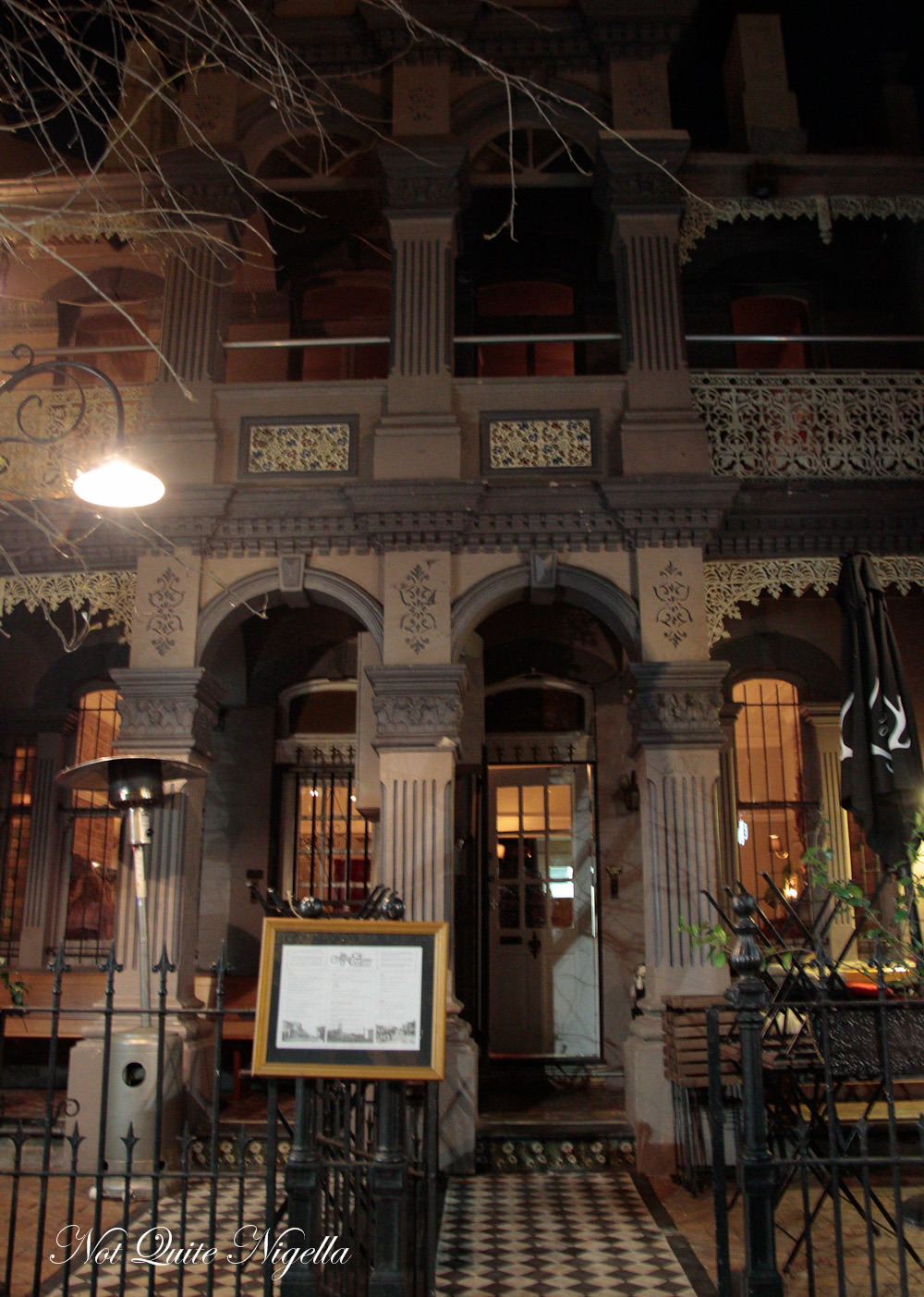