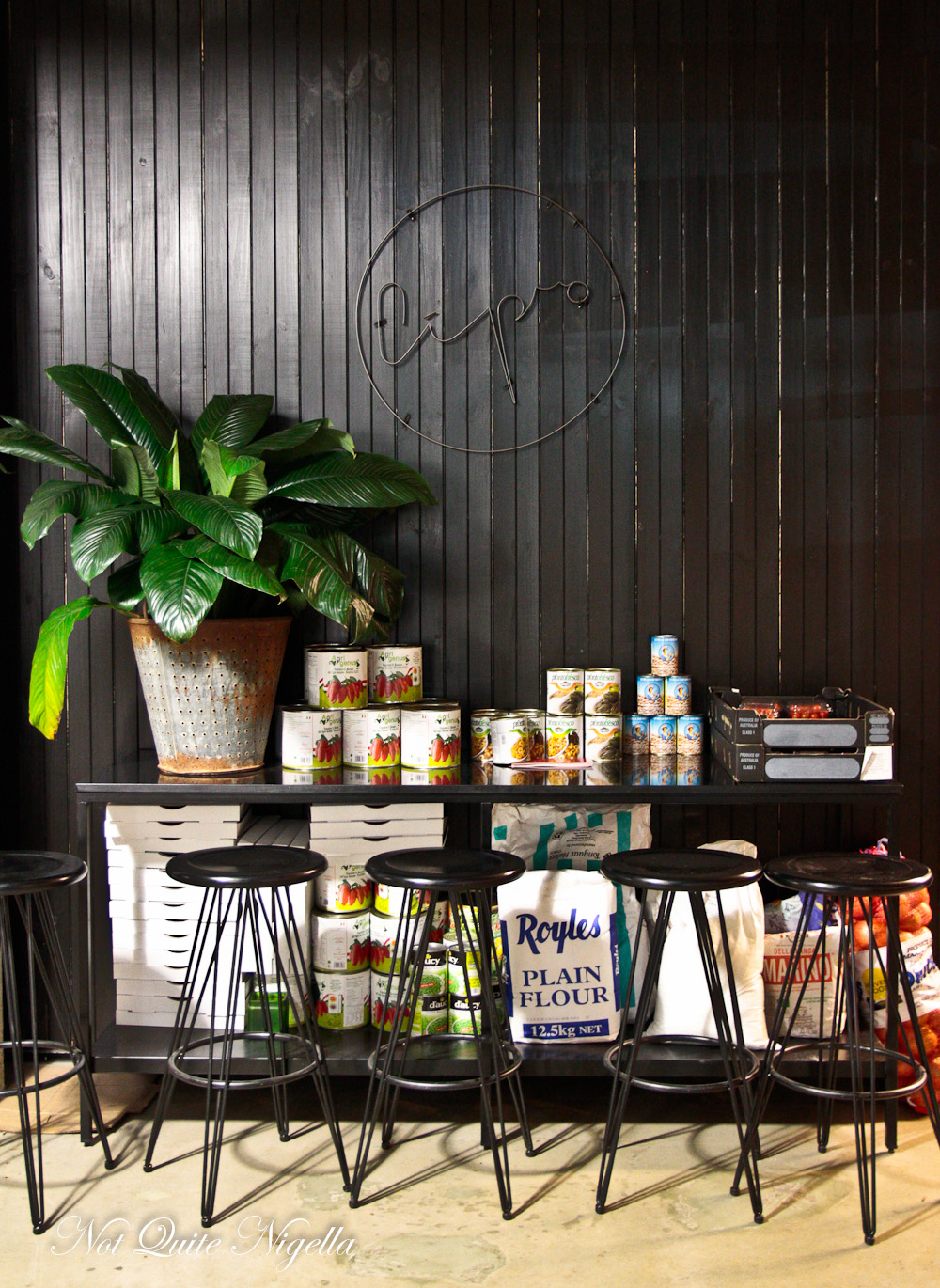 Mr NQN and I have a routine. Every week day afternoon he texts me to let me know what time he'll be home. This is usually so that I can figure out if I want to wait to eat dinner with him (I know, I've been called "nana eater" more times than I care to count). However he usually forgets when we've made a dinner date together and/or I am going out.

This one Tuesday night, my phone was silent. I tried ringing him and there was no answer on his mobile or work phone. I was pacing around because we had a dinner date at a place that closed at 8pm. Now 8pm for most Sydney siders is the time that you book your table but at Cipro in Alexandria, that is their closing time. When he burst through the door at 6:30pm completely unaware of our dinner date, I grabbed him and implored him to get dressed quickly and reminded him while rushing around that we needed to go to the pharmacist first. 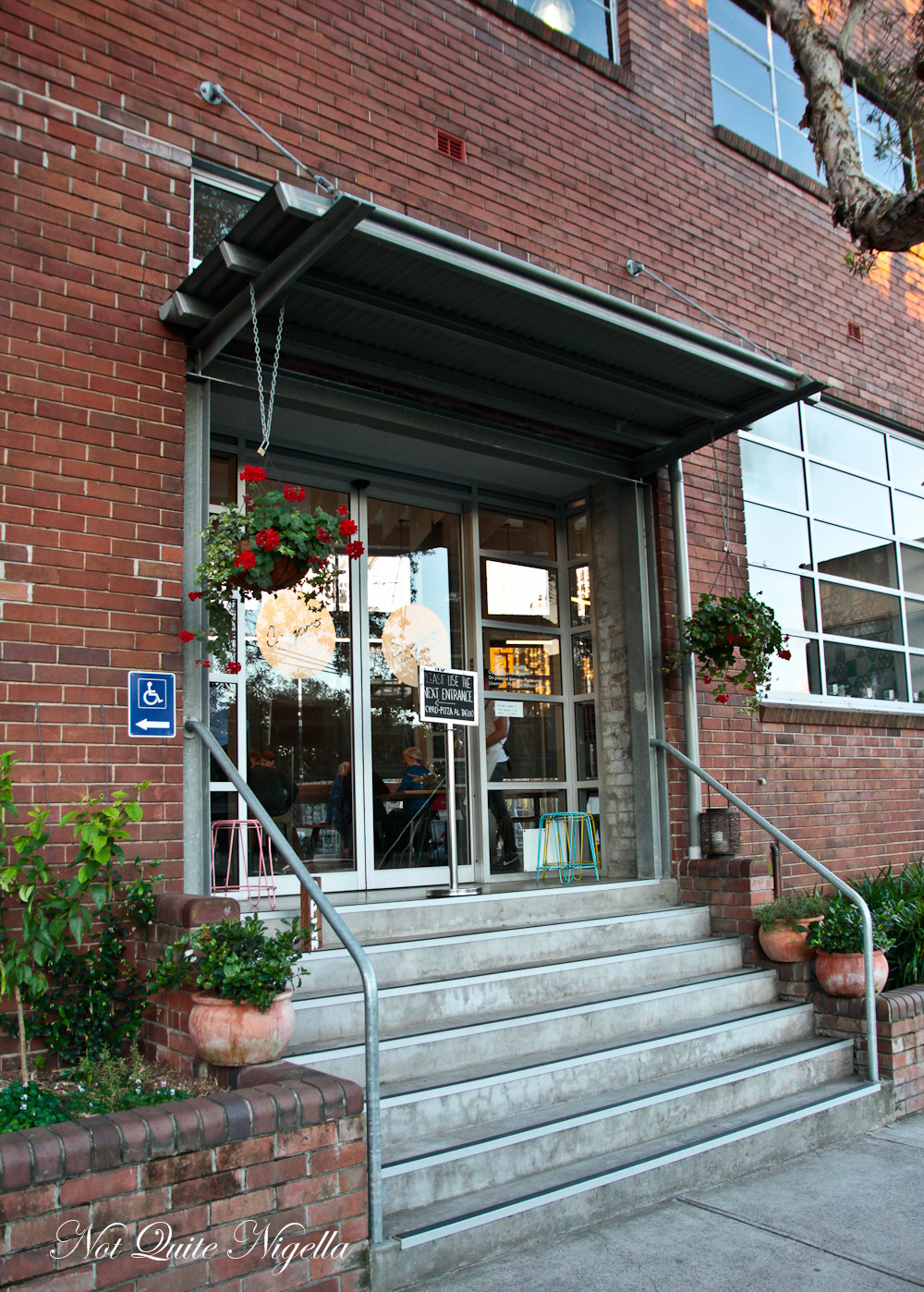 "Get in the car!!!" I implored and we made it to Cipro at just after 7pm, slightly agitated but otherwise hungry. It's a quiet night in Alexandria and so there is a small crowd that grows larger the later it gets. Cipro is the idea of Khan Danis, his wife Catherine Adams and Angel Fernandez and Penny Watson Green. 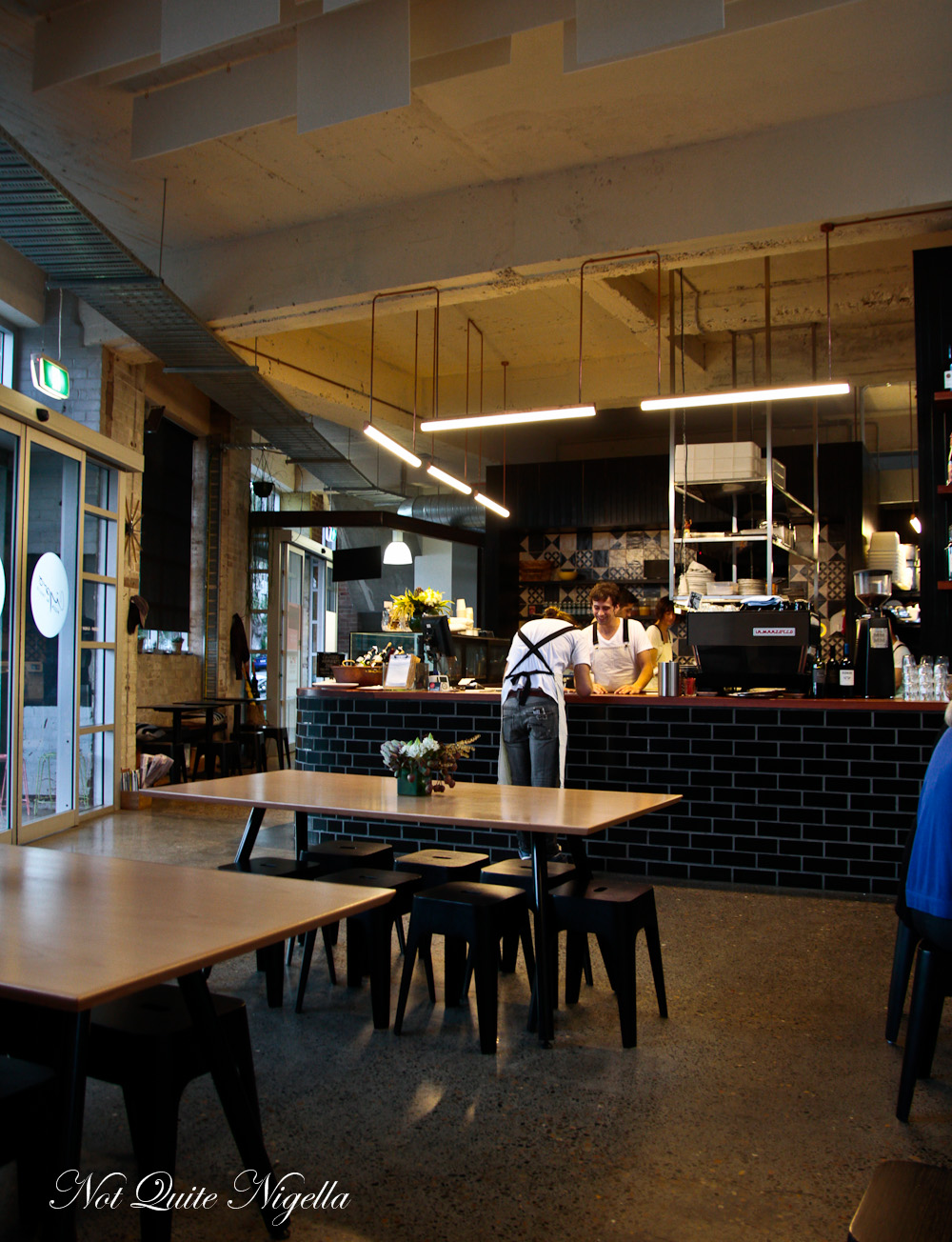 I was warned about the service here by a magazine editor who told me that it was brusque. However tonight it seems fine, cordial even. We ask for recommendations because quite honestly everything sounds delicious and we find ourselves pointing at everything (okay that was just me, Mr NQN just said "choose anything"). 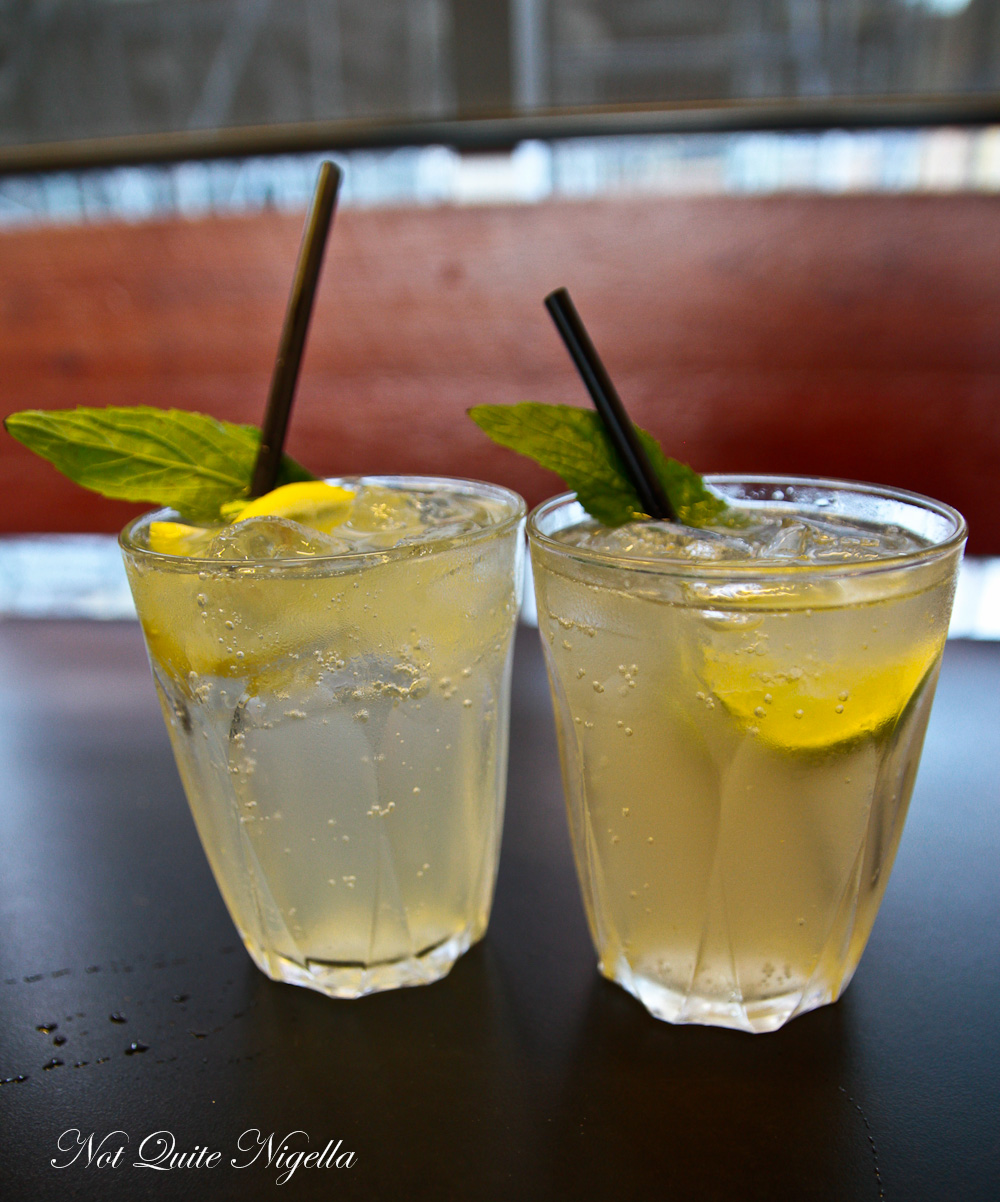 House made lemonade with rose water and mint $3.50 and elderflower and ginger beer drink $3.50

Both drinks are refreshing, the elderflower is floral with a ginger accent while the house made lemonade is light with the rosewater the predominant flavour. 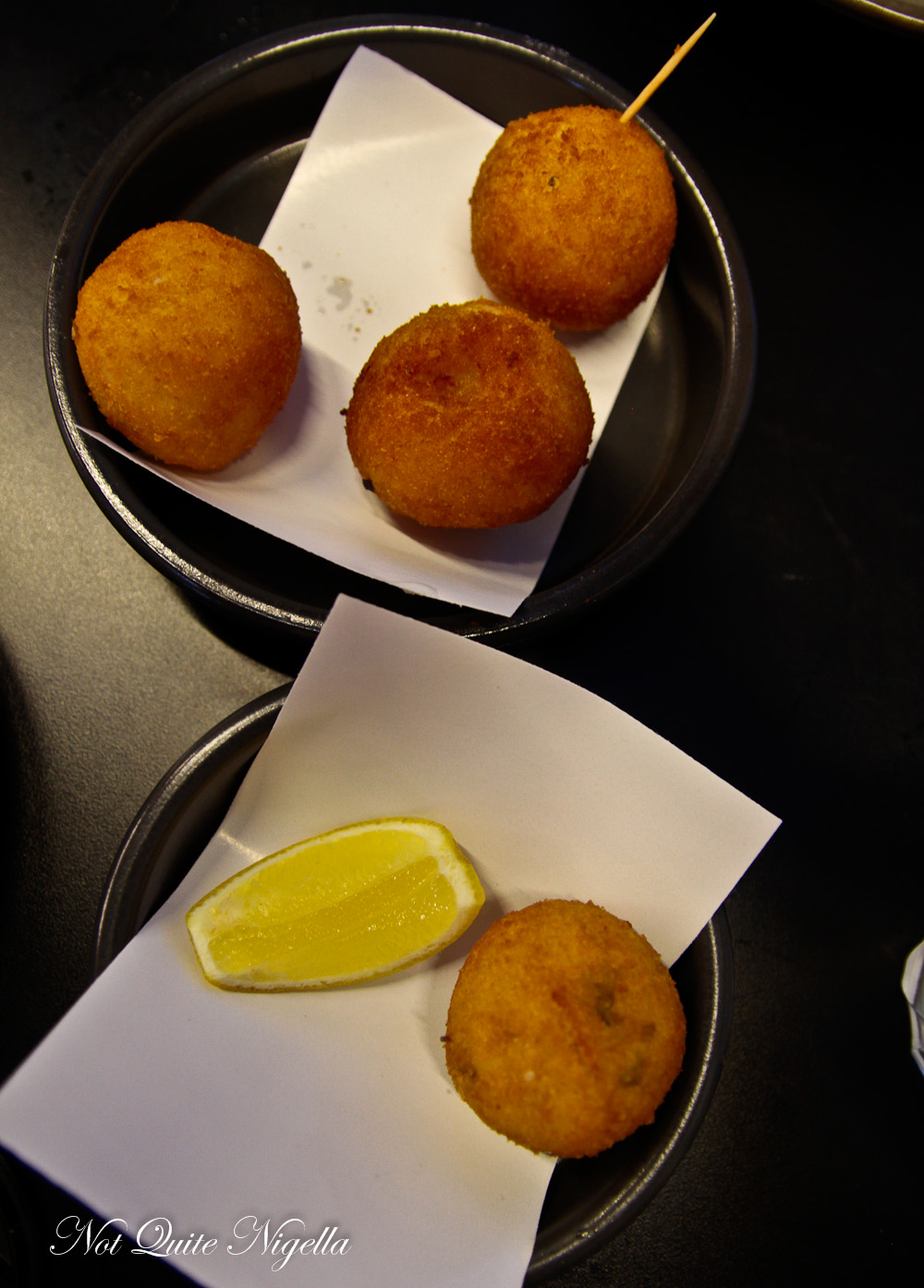 What do you do when you want to try all of the arancini balls? You split them! We tried all three flavours: pea and provolone; chicken, tomato and mozzarella and the pork ragu with mozzarella. All three are excellent with a thin breadcrumb coated golden crust and a runny cheese centre which gives the balls a good, moist texture. They all taste distinctly different too although we were hard pressed to pick a favourite. The salt cod ball had the same treatment as the arancini but had a salt cod filling to it rather than rice. 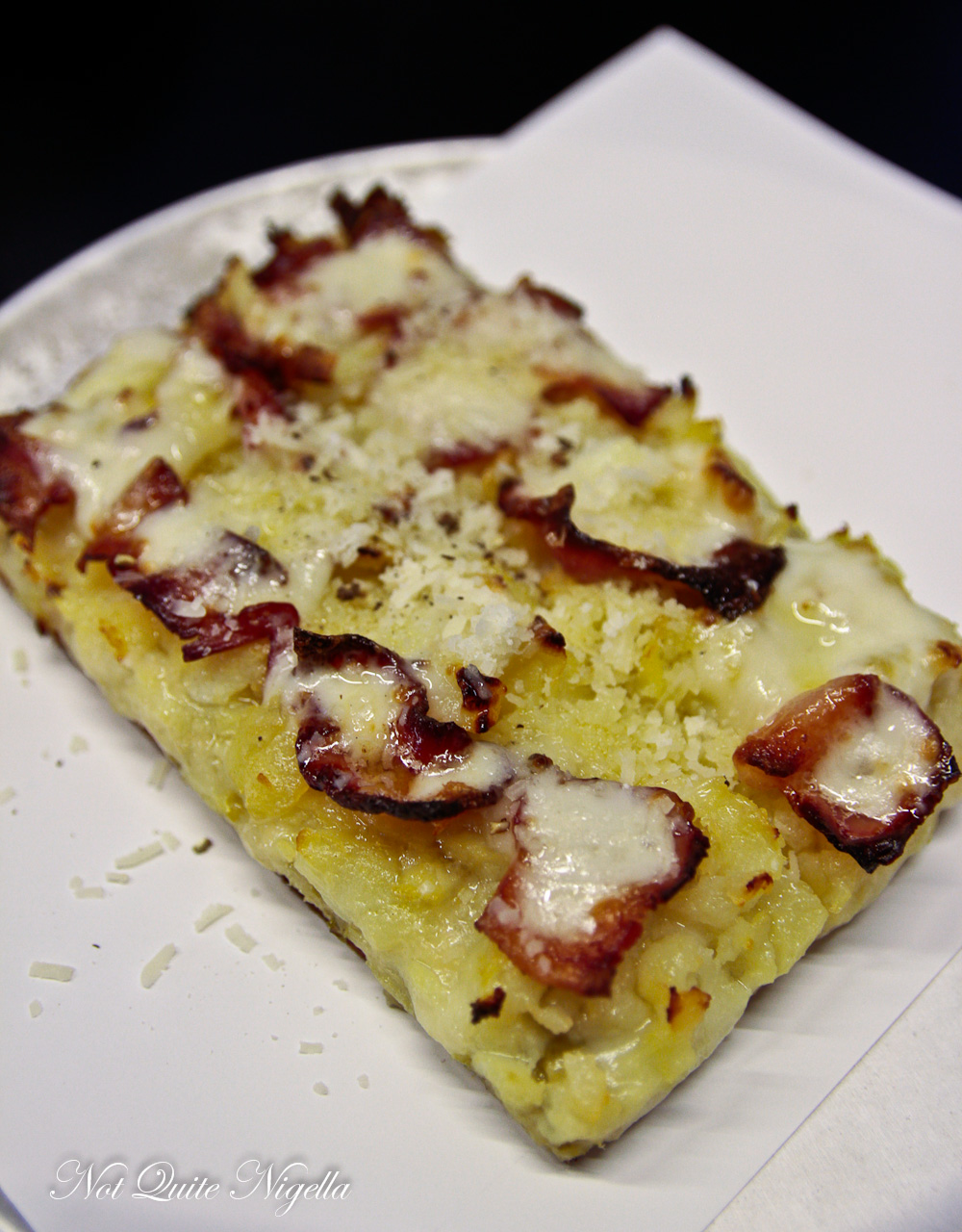 Some might question a slice of pizza at $12 (we overheard a few) but the pizza here is thicker, almost like a spongey focaccia with crunchy crusted base so one piece is filling. The potato pizza was also topped with leek, three cheese and speck and it was delightfully smokey. The kind of slice that you ate slowly to savour the texture and flavour. 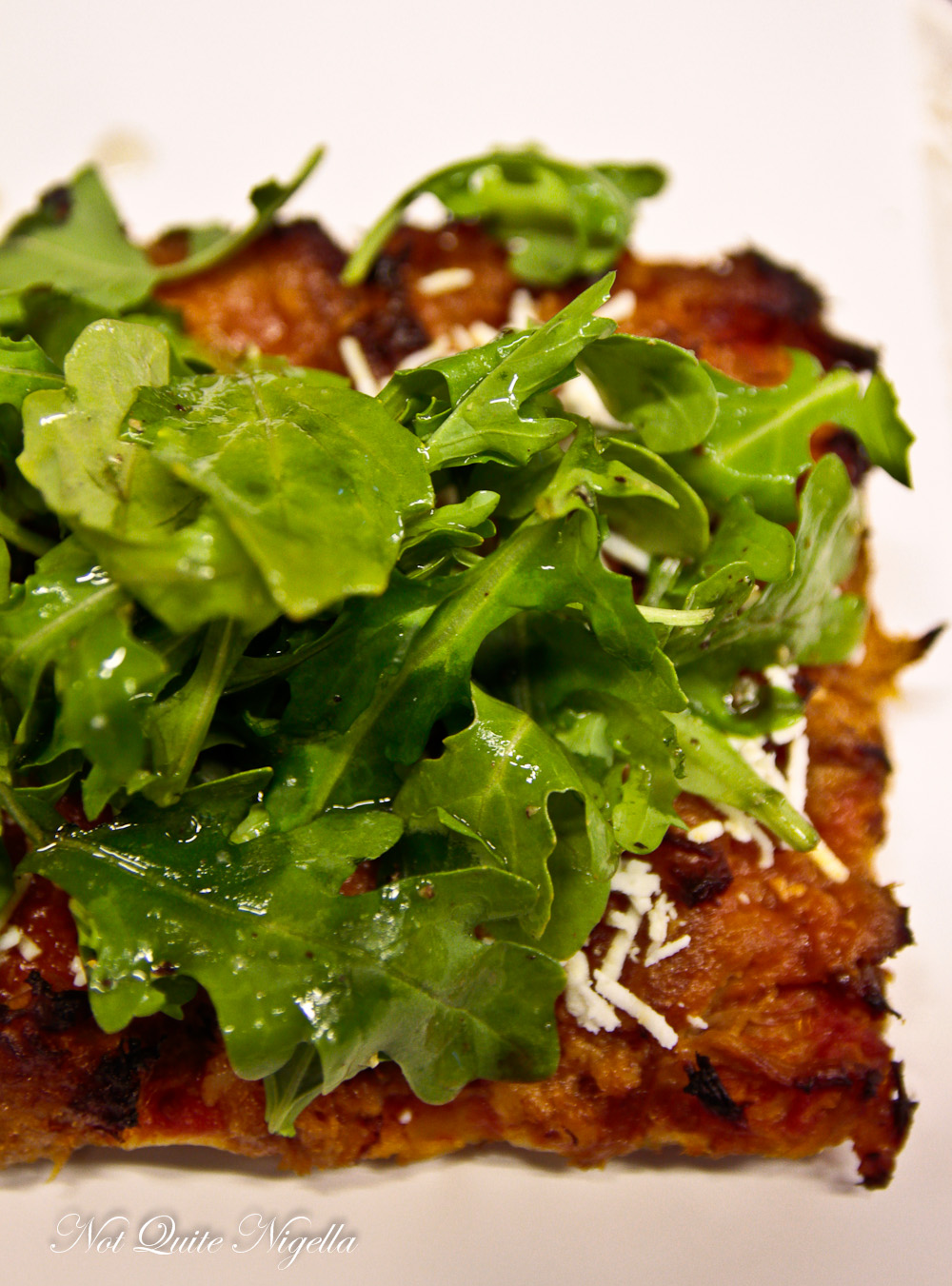 The pork ragu pizza was flavoursome but we both preferred the potato pizza. I liked the pork ragu but I think I would like it better with pasta rather than on a pizza. 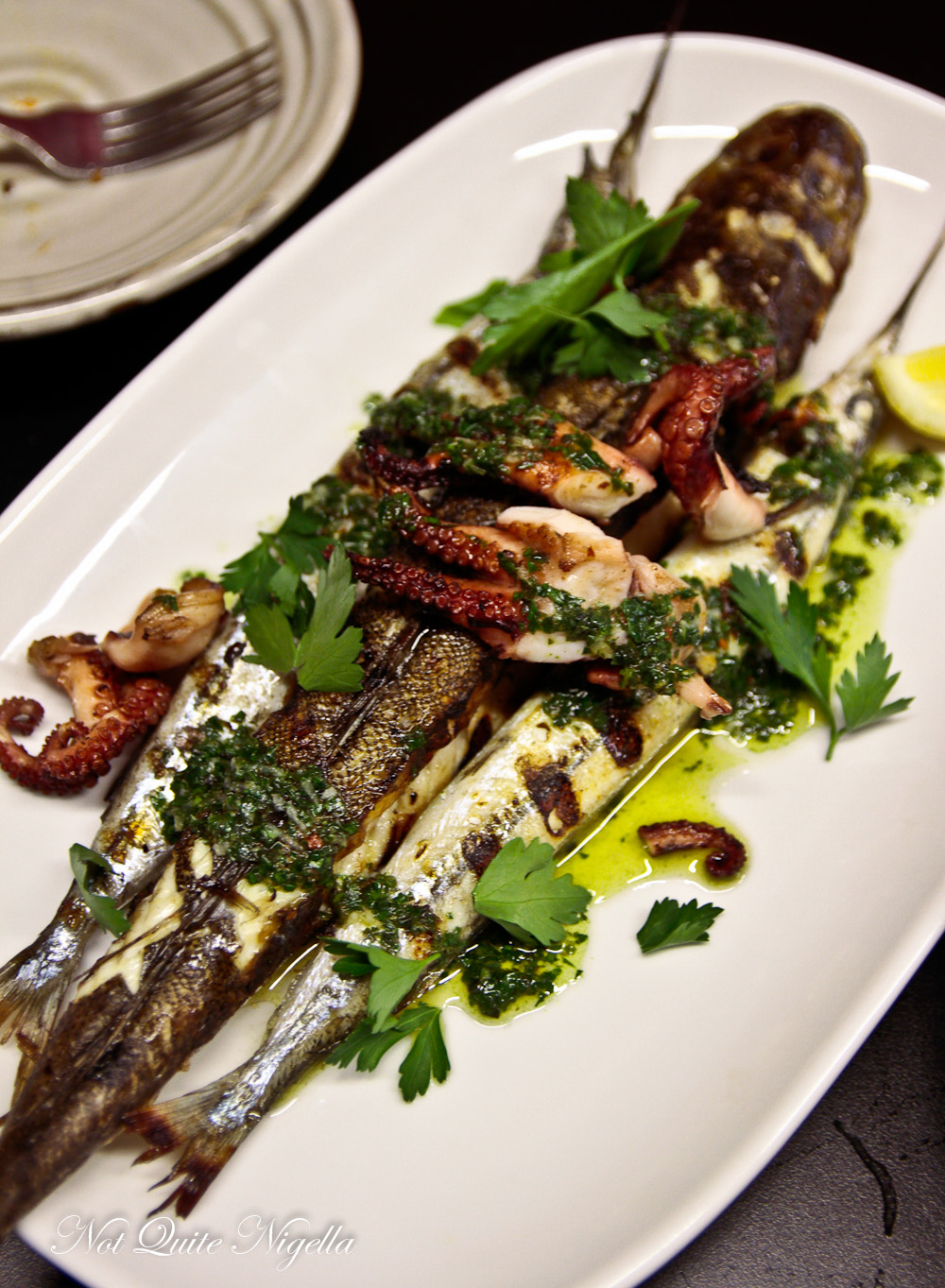 When they first said Mixed Grill, my mind flashed back to when I was a waitress during university in the 90's working at a cafe where a mixed grill was a heart attack on a plate consisting of chops, sausages, bacon and a steak. Here, it's something entirely different -pelagic in theme, with a flathead and two garfish and some octopus. The fish are grilled with a nice char to them but the favourite for me is the tender octopus. They're served with a herbed emulsion and fresh lemon. The flathead has a great flavour to it while the garfish are moist in texture. I don't mind the bones but Mr NQN struggles with them. 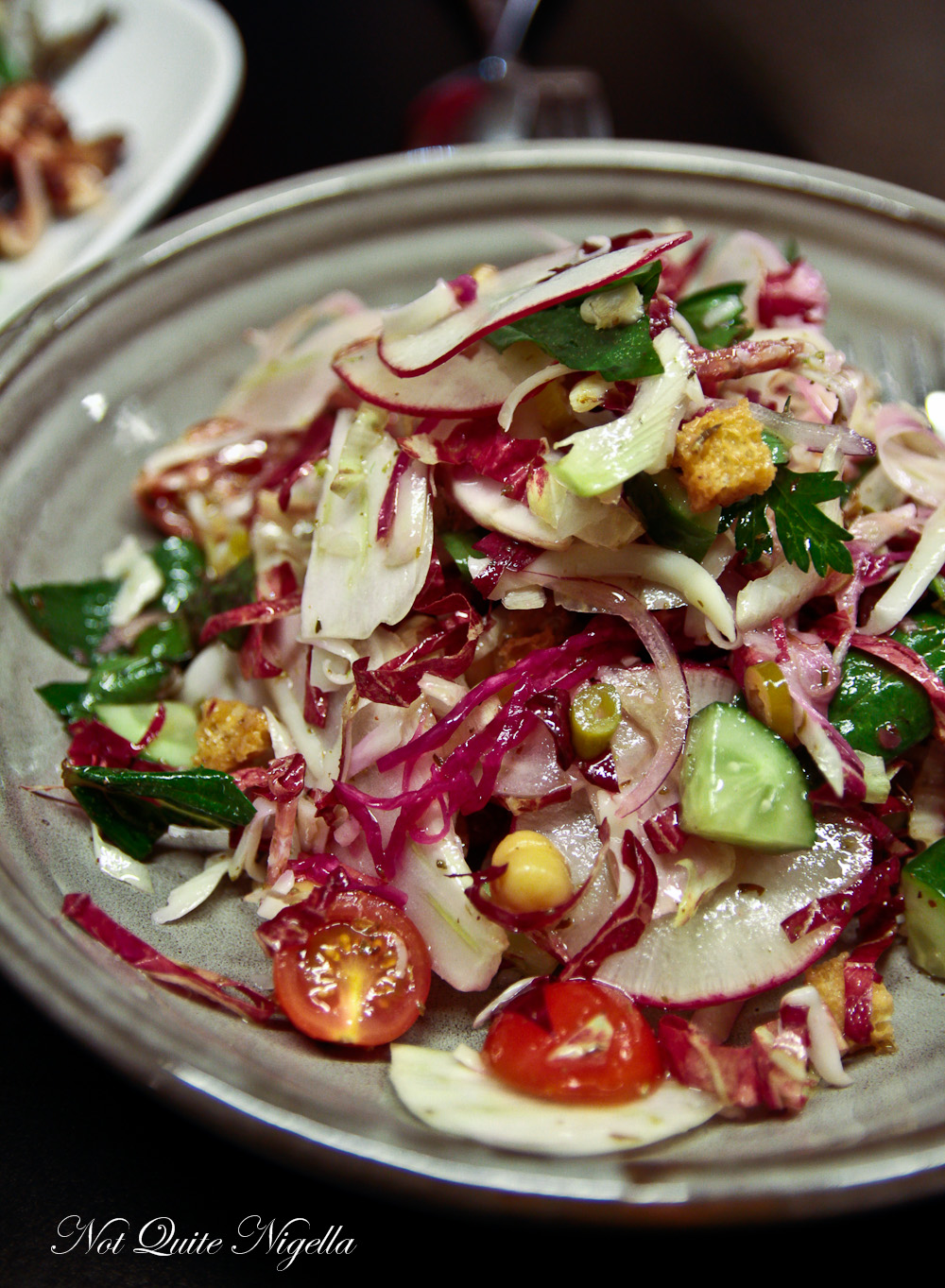 I do love a good salad and this one had a cast of thousands. There was radish, cherry tomato, parsley, radicchio, red cabbage, chickpeas, thinly sliced salami, cucumber, mint and fennel. The dressing has a sweet aspect to it and Mr NQN has to claim his half of this before I finish it all.

We overhear the table next to us who are unhappy at some of the comments by the waiter. They're miffed as the waiter makes some borderline comments-ahh perhaps this is what my friend meant by the service! 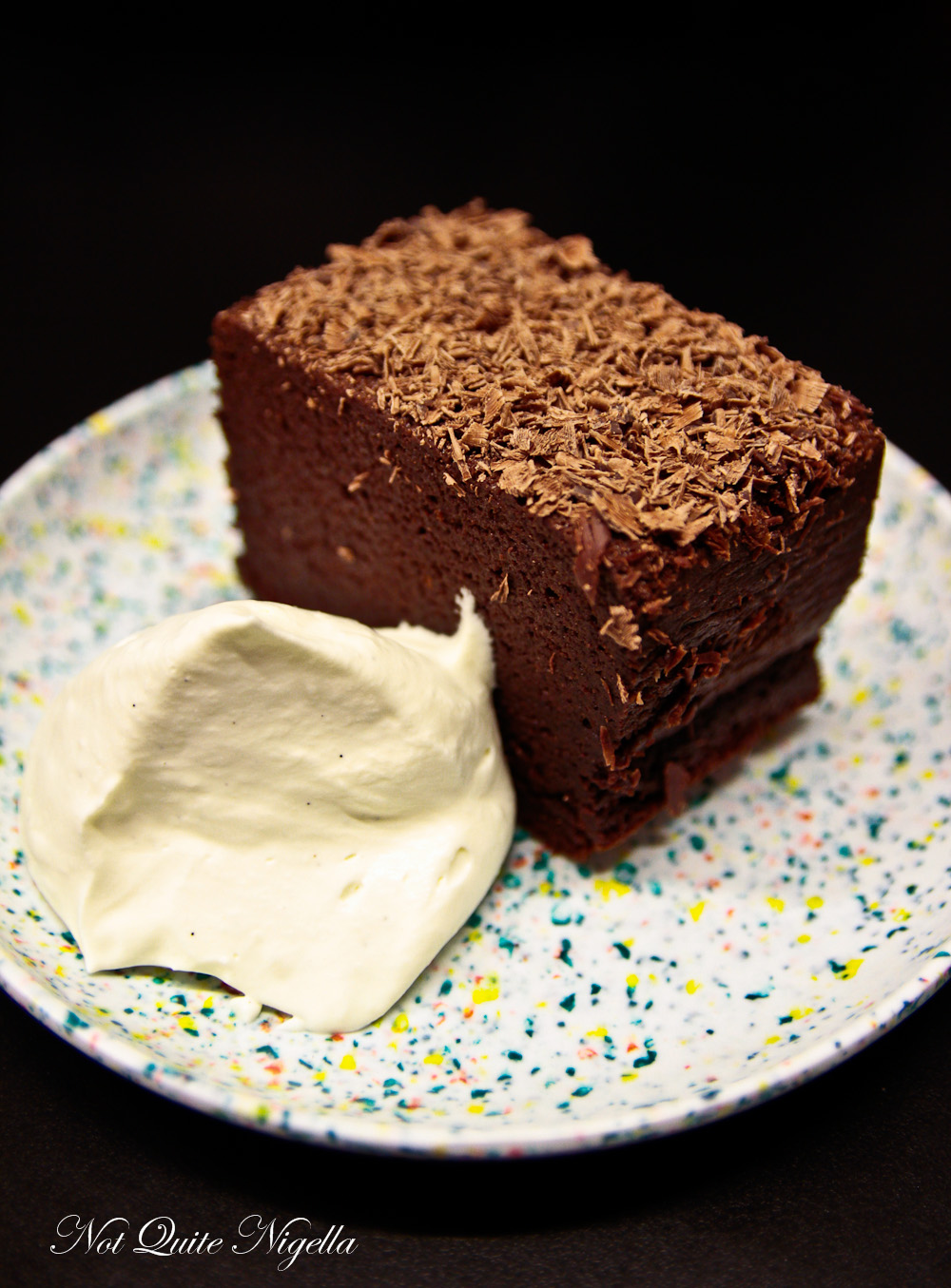 "I can't fit in any more" Mr NQN groans having eaten the lion's share of the food. I'd saved a little room for dessert and we decided on the flourless chocolate cake. The cake is very light and almost dry in texture needing the cream on the side. It's a sizeable piece too sprinkled on top with chocolate shavings and Mr NQN raises a fork and keeps going with this too.

So tell me Dear Reader, have you ever forgotten when you've had meetings or get togethers with friends?