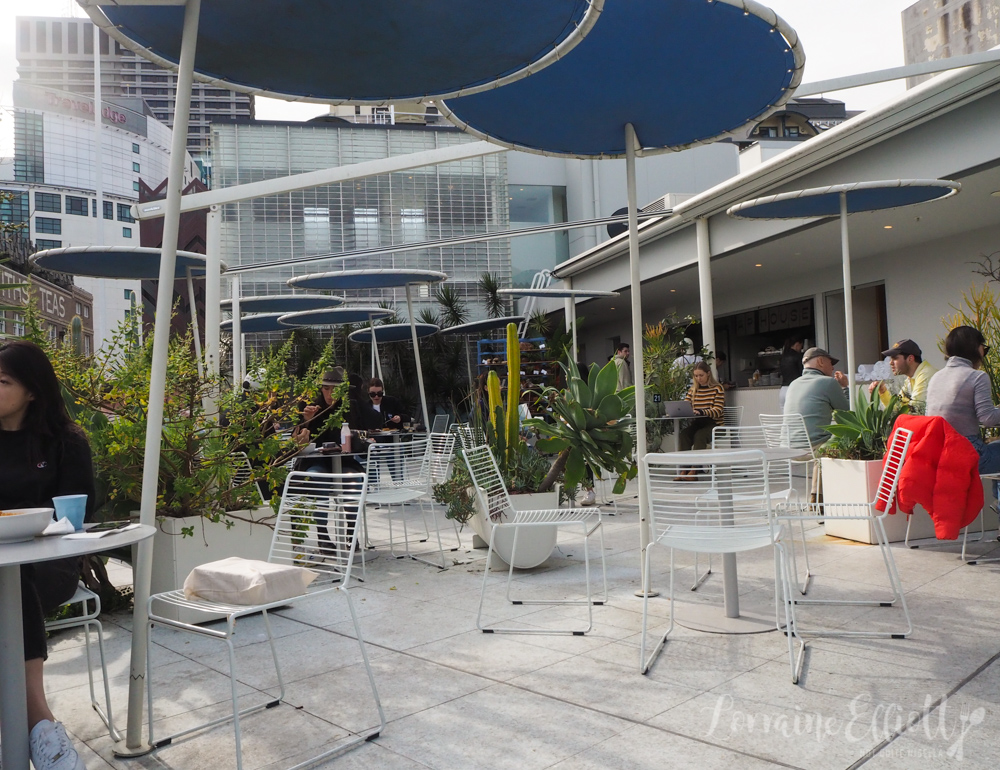 A.P. Bakery has found a permanent home so that means that their sought after baked goods are easy to find. Not only that but their home is on the rooftop of the Paramount House Hotel. This outdoor area has vibes of Palm Springs with a pastry menu and an eat in cafe menu. 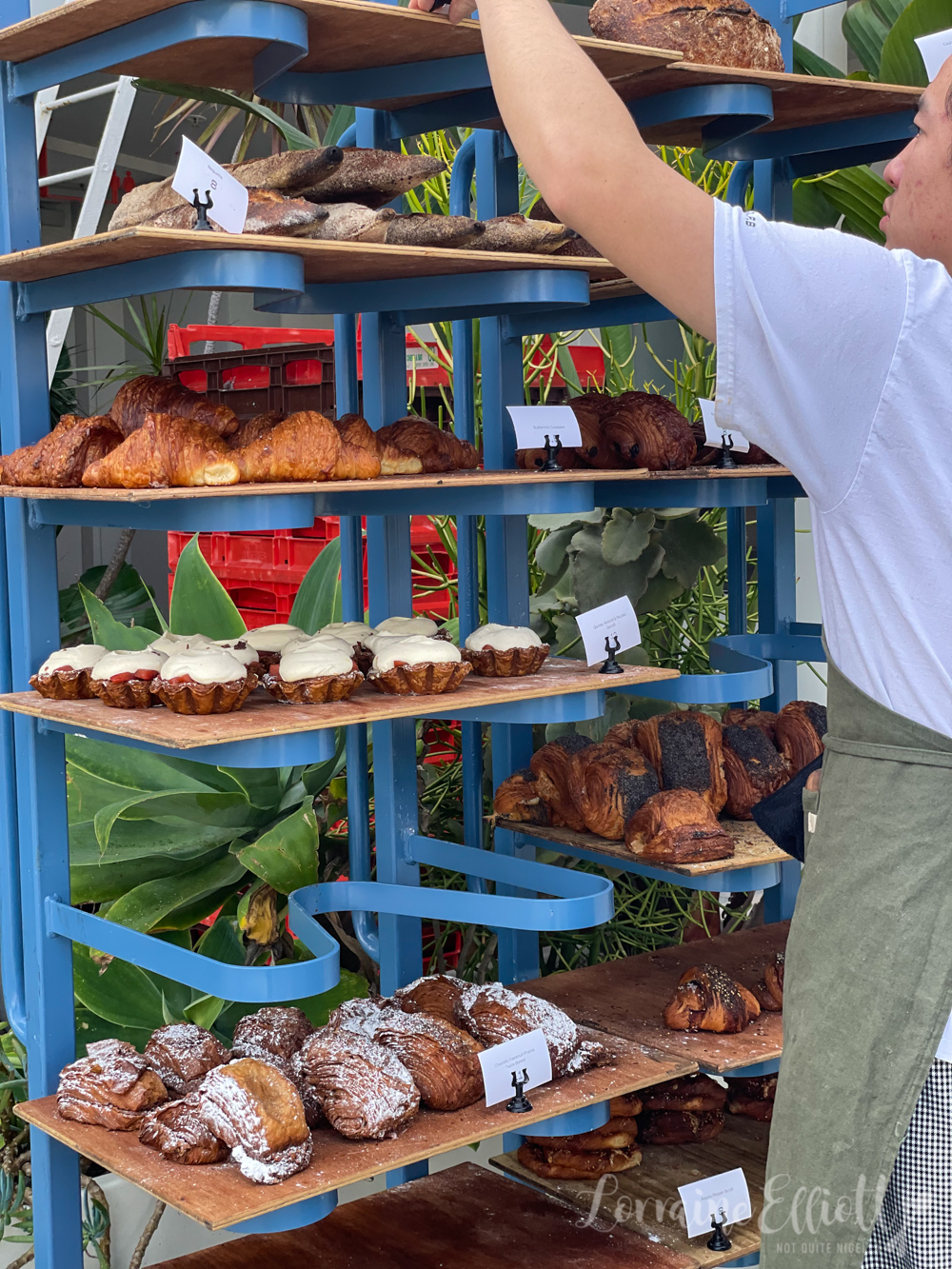 I'm walking towards the Paramount House Hotel with Valentina. It's a sunny winter Sunday but most importantly there's little wind and no rain at all which is integral for a visit to a rooftop cafe. Since February 2022 AP has been located on the second floor of the Paramount House Hotel. The menu has a lust worthy list of items. On one side there's a pastry display and there's also a menu with cafe style dishes, coffee, tea and soft drinks as well as a small selection of wine and beer. AP stands for All Purpose Bakery and is owned by Ping Jin Ng (of the Paramount House Hotel and Golden Age Cinema) Russell Beard (of Reuben Hills) and Mat Lindsay (of Poly and Ester). 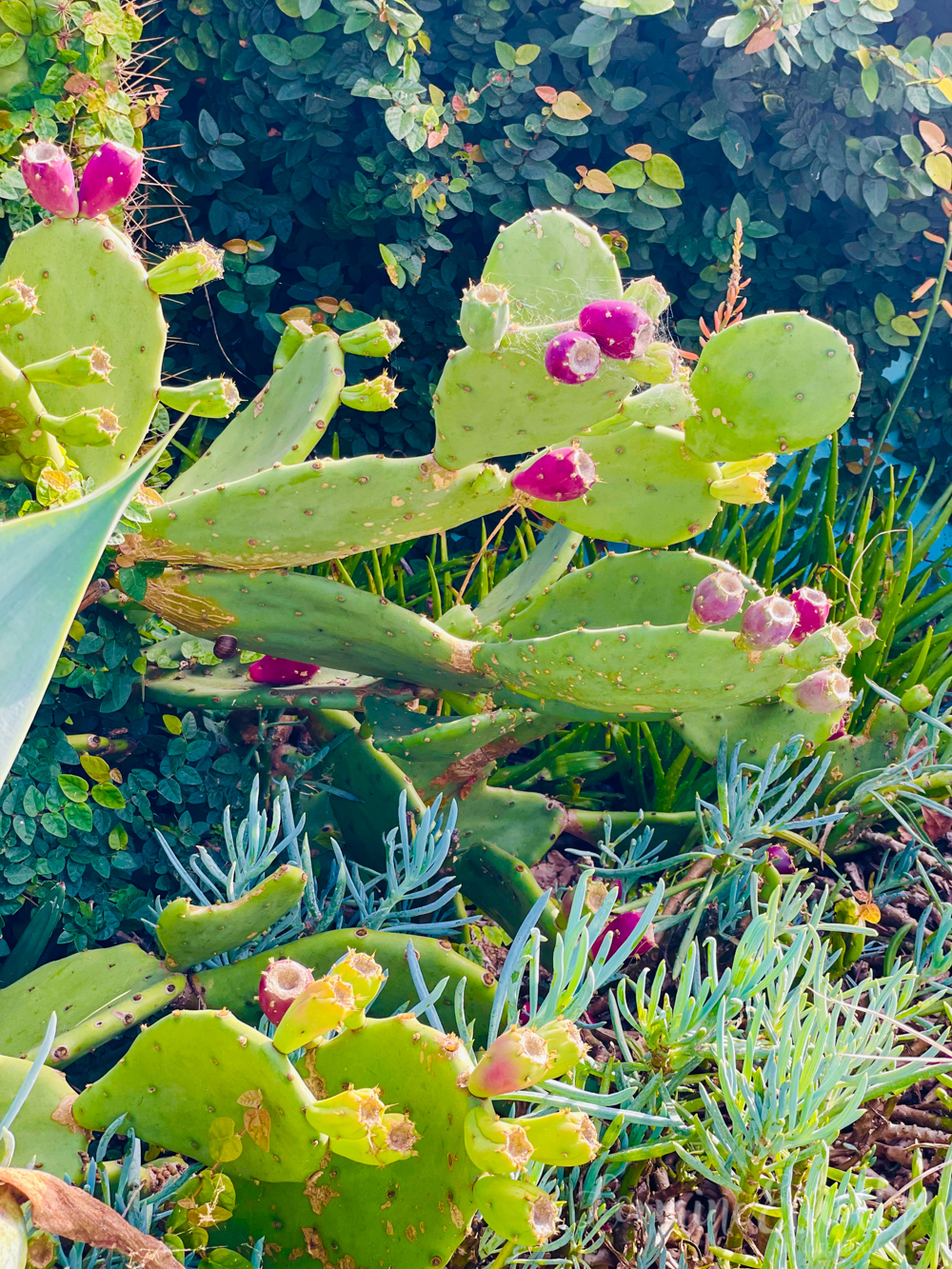 Nabbing a table looks like a challenge but a friendly couple get up and leave just as we arrive apologizing for the croissant crumbs left in their wake. We take a seat and look at the menu but ordering is done at the counter. I miss out on the canele (you have to get in early, oh how I sometimes wish I were a morning person!) and a few of the pastry items are sold out. 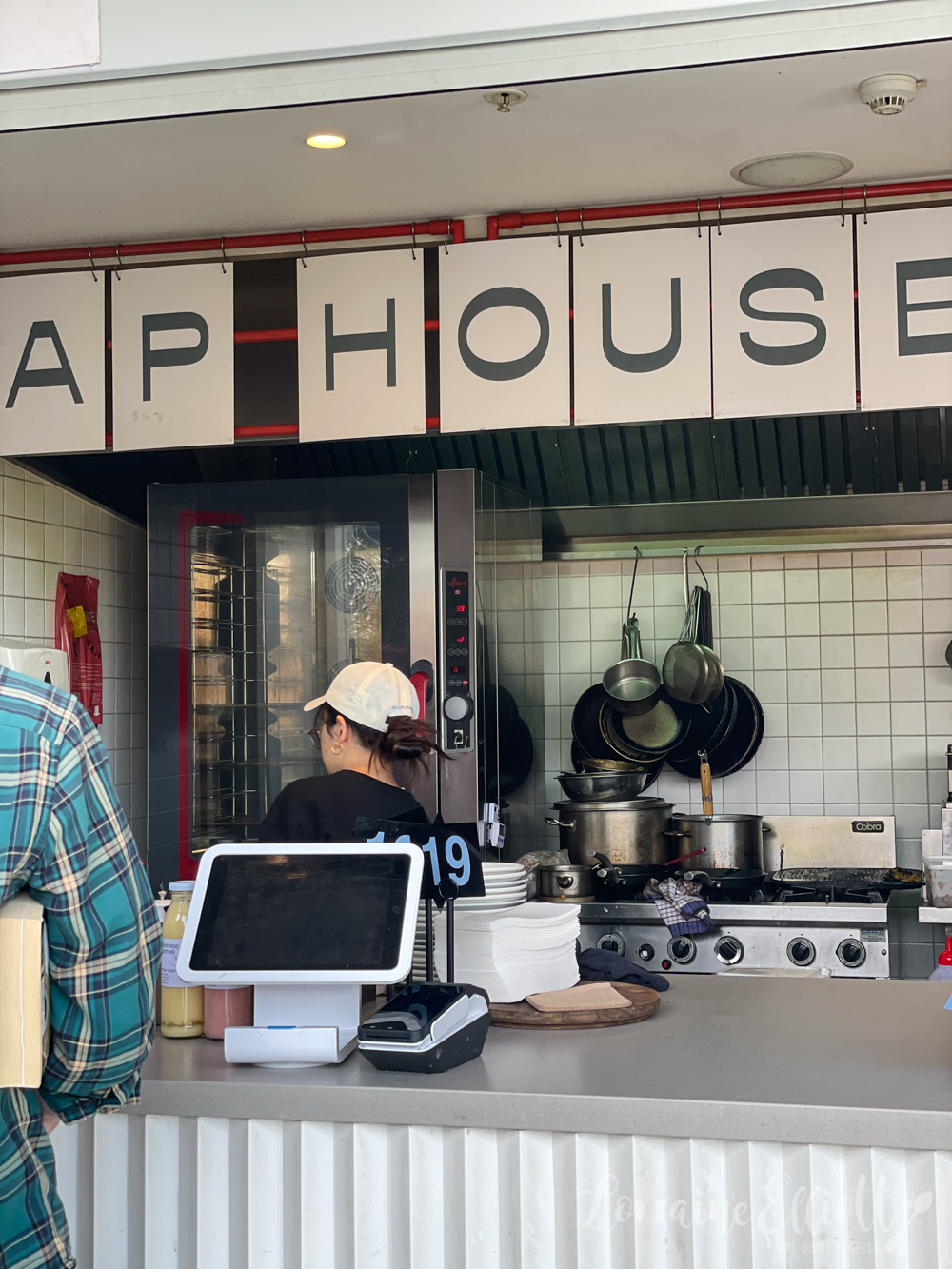 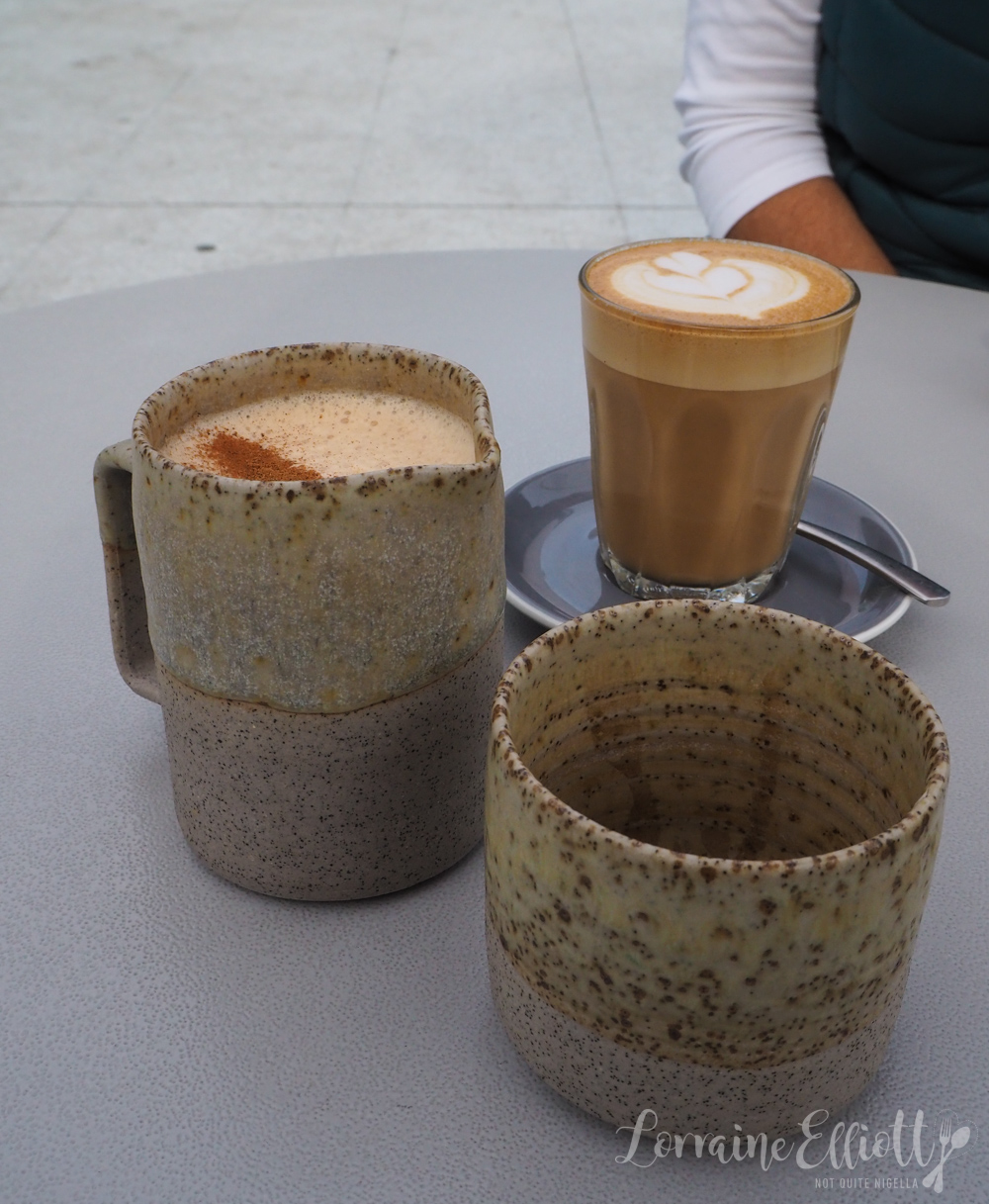 The chai latte comes in a gorgeous little jug and it's perfect to warm us up. Just one warning: the food can come out at different times and Valentina's burger arrived about 10 minutes before my food so things are best shared. 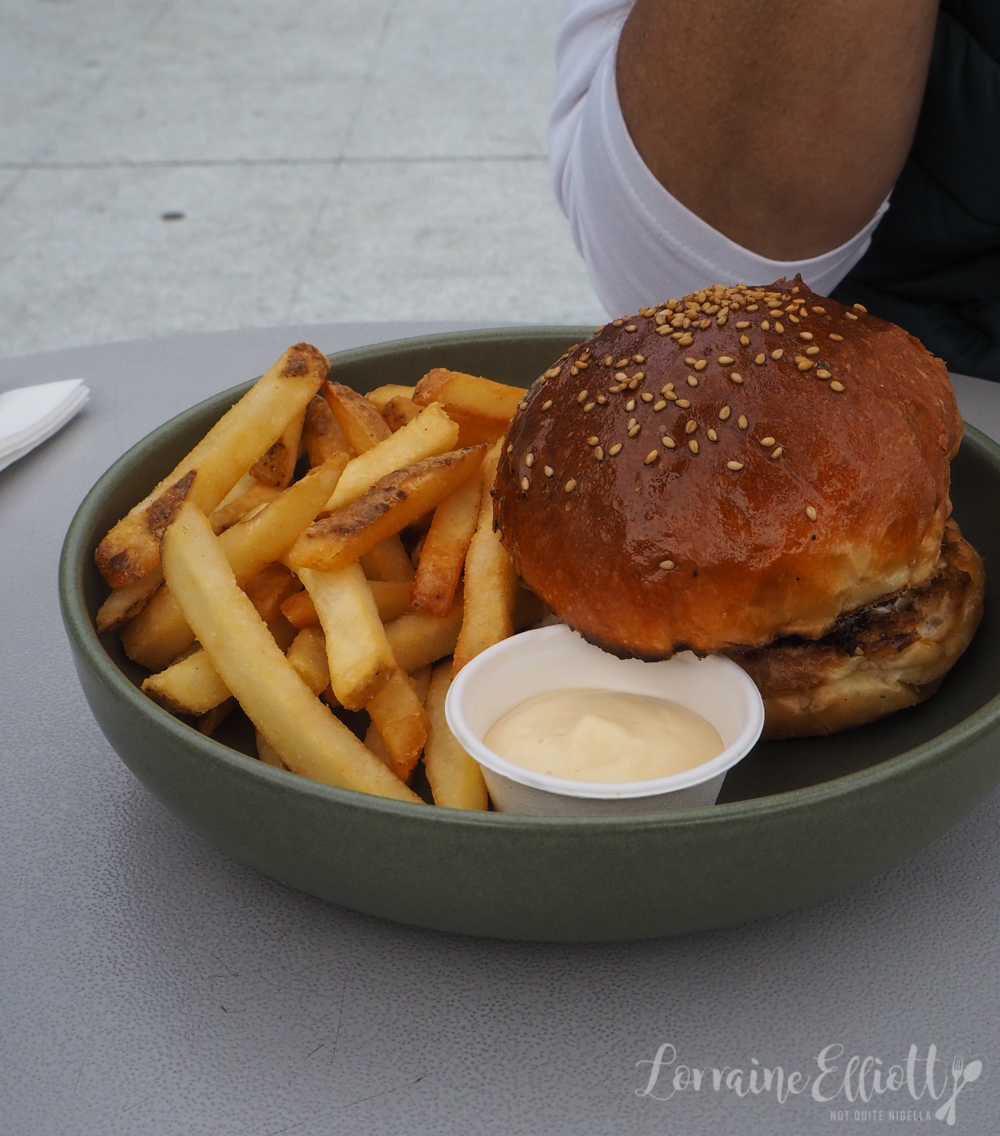 Valentina orders the AP Cheese and Onion burger which is a beef patty topped with cheese, barbecued onions, pickles, mustard and onion aioli on a milk bun. It's delicious and a good solid rendition of a burger elevated with the onion aioli which I want to try a version of at home. It comes with chips that we dip into that delicious aioli. 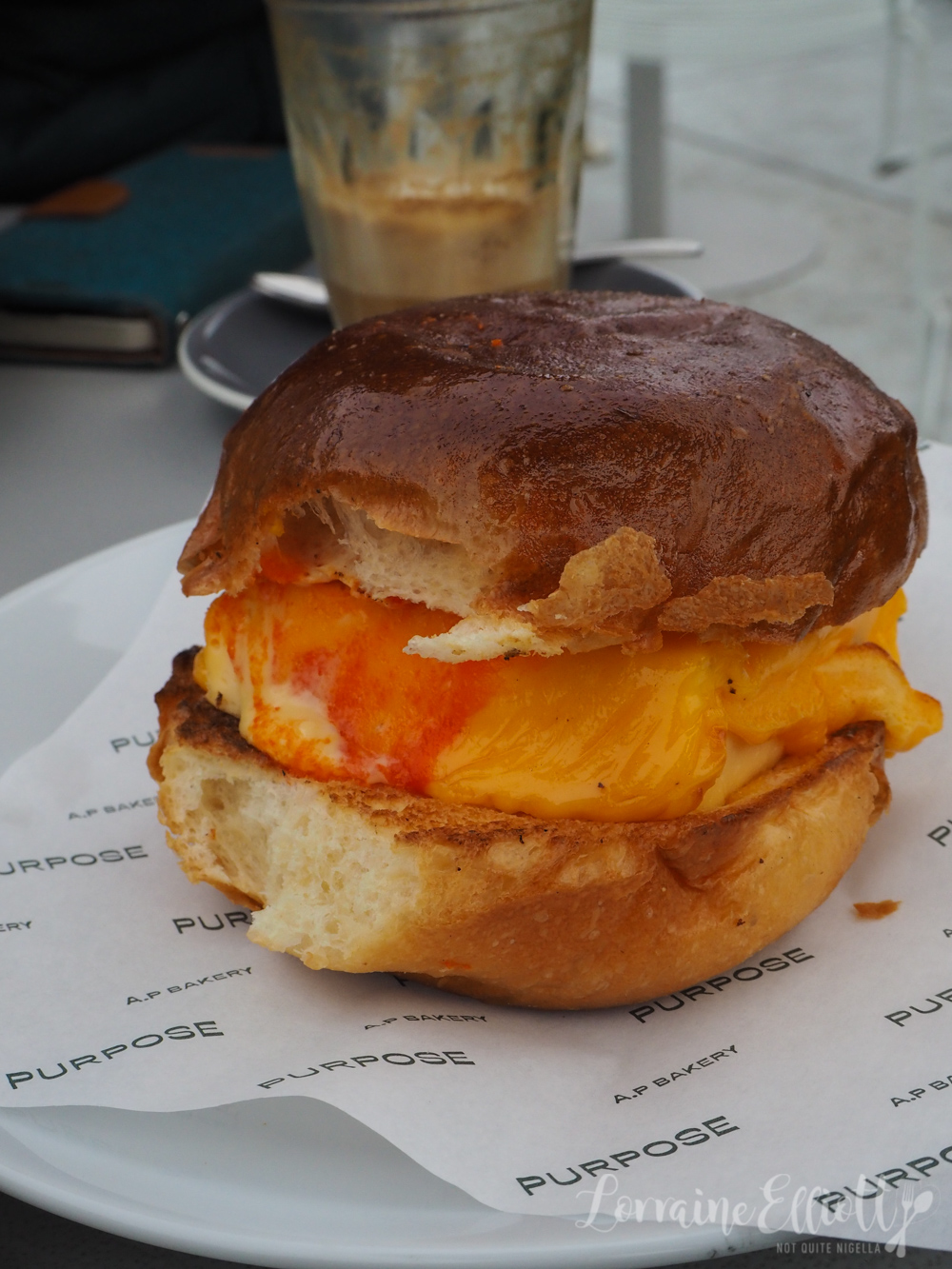 There's one item that catches everyone's attention if social media is anything to go by and that's the egg and cheese. It's a fluffy egg cake (like this one here), melted cheese, onion, egg butter, salted egg yolk on a milk bun. There's the option to go big by adding a hash brown or cured ham and honestly if I wasn't so overwhelmed with choice I might have gotten at least one. The egg and cheese is all about wobbly and soft textures from the pillowy soft lightly toasted milk bun to the wobbly, thick (thicc) egg cake and melted cheese. 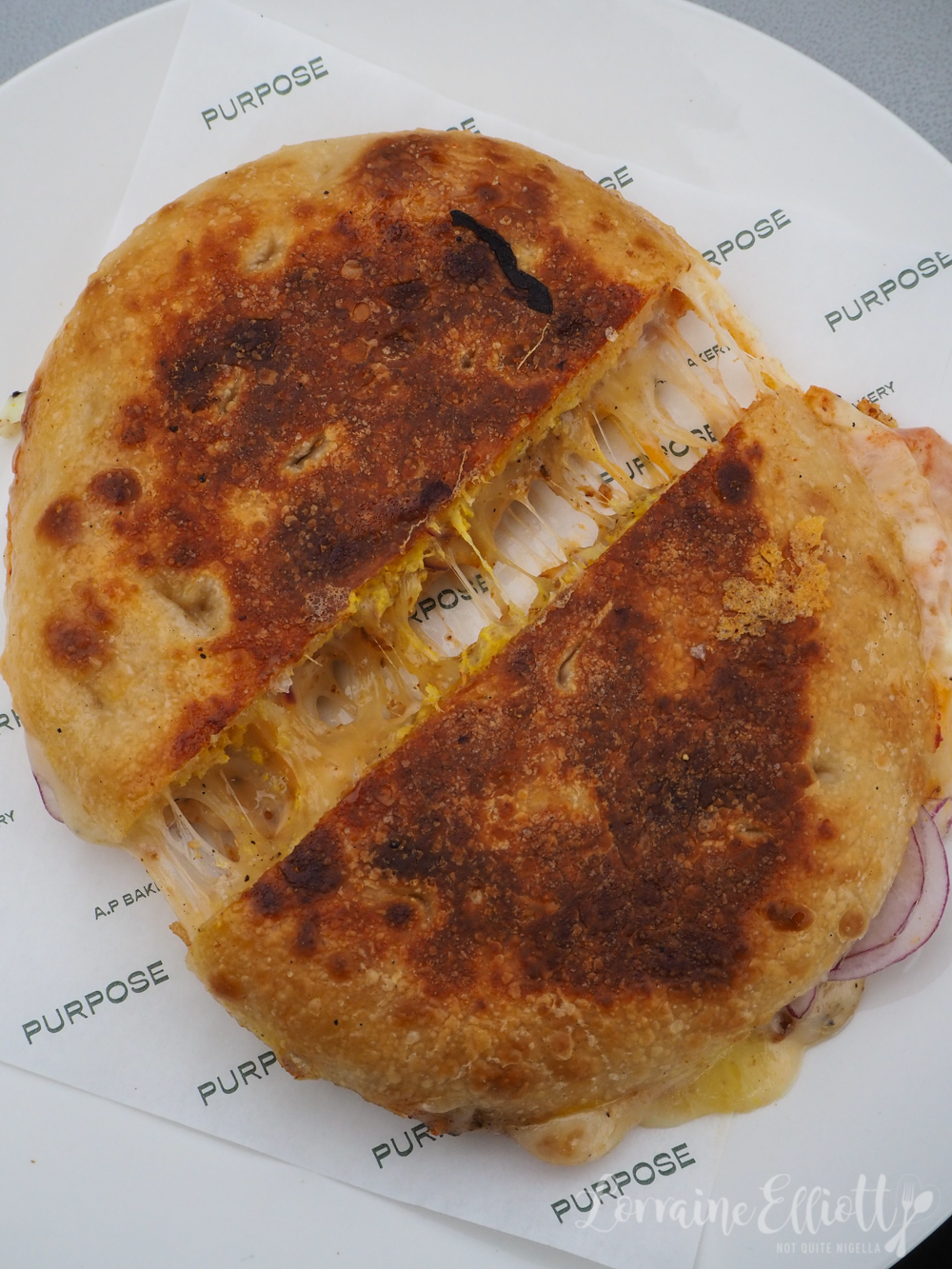 It's cheese toastie season! And in aid of this I have to try the hot pocket. This is a blend of cheeses, mustard, onion and black pepper. Again there's the option of adding pickles or cured ham and I think I'd add at least one next time. It's very good but it does need a little something extra in a boost of flavour via pickles or ham or even Sriracha. 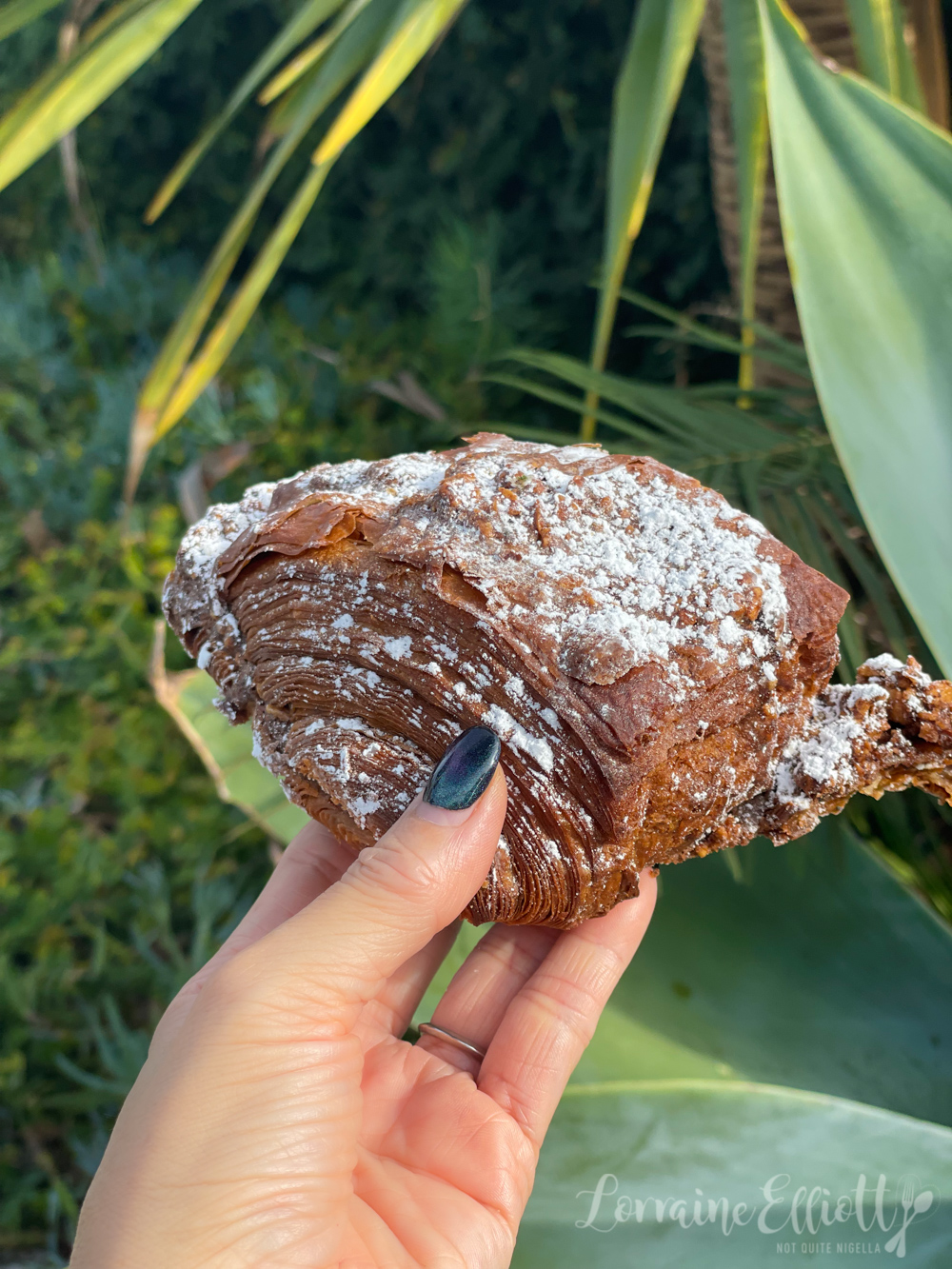 The hazelnut and chocolate praline croissant is a beauty and I can see why the previous table occupants scattered all of those buttery crumbs because I do the same. It's a double baked croissant so it has maximum crunch and is filled with hazelnut praline and chocolate. It's perfect for dipping into coffee. 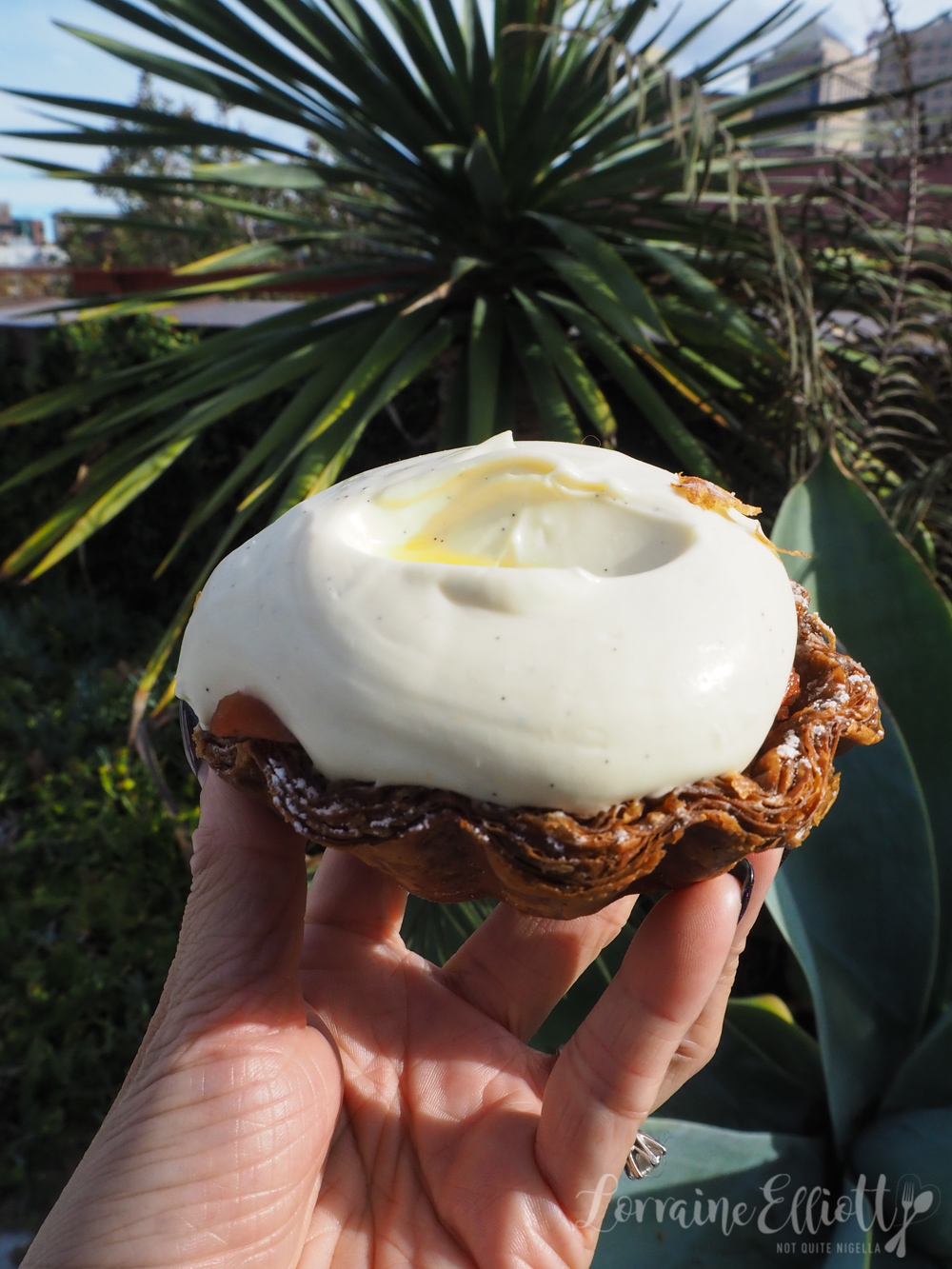 Back at home I sink my teeth into the quince Danish which is a layered tart base baked dark with tangy sweet quince, a layer of almond frangipane and a cloud of whipped ricotta cream on top. I particularly love the layers of flavour and texture from the crisp base, light and cream ricotta and the tangy quince and rich almond frangipane. 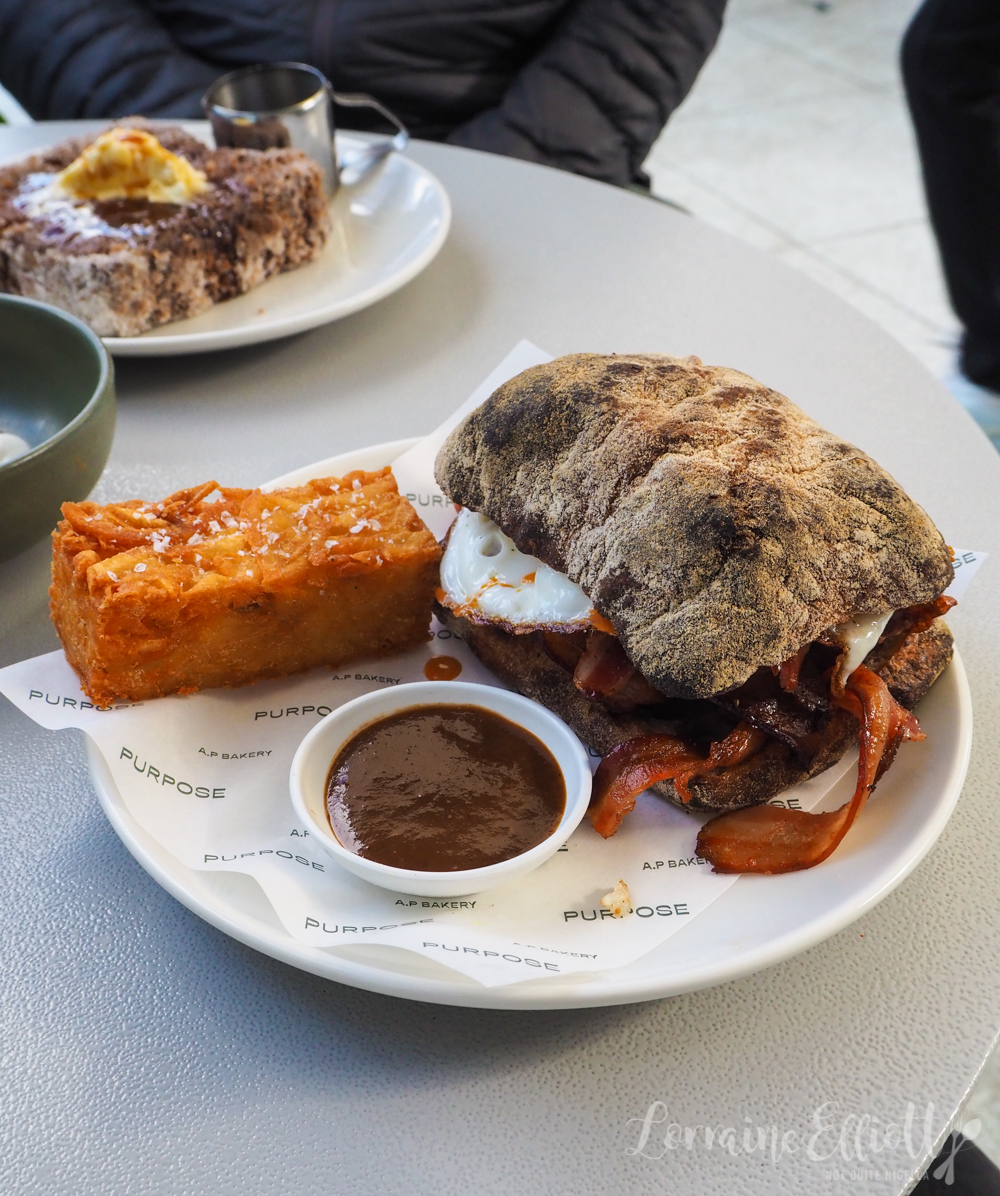 I return a couple of weekends later with Mr NQN in tow (and funnily enough Valentina was such a fan she returned on the same day a bit earlier). This time we order a "crispy bacon". As the name suggests there's lots of crispy bacon, curry leaf butter, hot sauce on fermented potato bread with a fried egg. I love potato bread and this doesn't disappoint at all. It's soft and spongey and good with the very generous serve of bacon. The curry leaf butter takes a back seat due to the sheer amount of bacon and you can dip it in the hot sauce on the side. I also ordered a hash brown to go with it and it's fantastic, super crispy and layered. 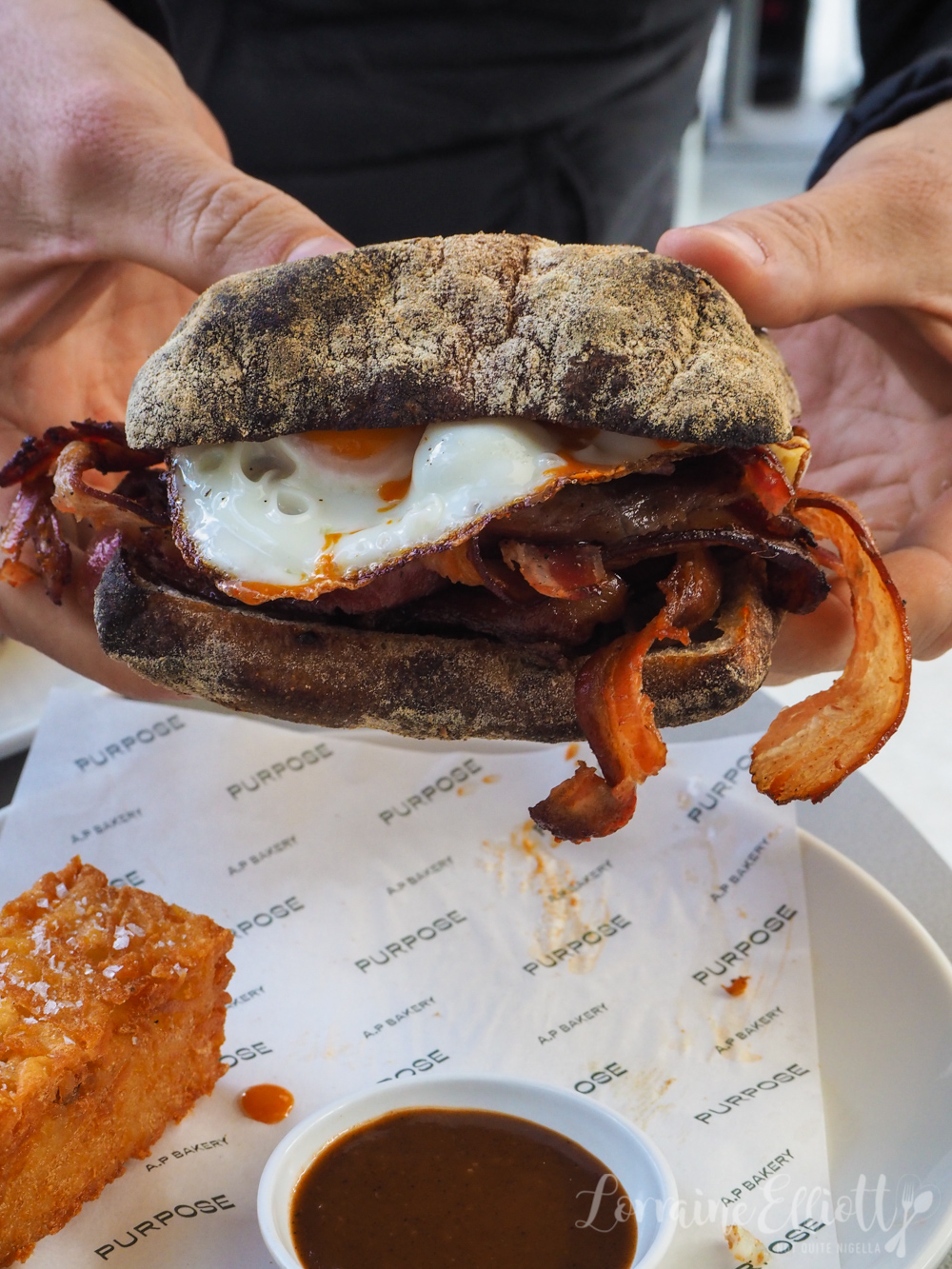 Mr NQN goes for the smoked beef brisket bagel with thick slices of beef and pickles on a very seedy everything bagel. It's nice although the bagels are firmer and I prefer softer Montreal style bagels with beef brisket. 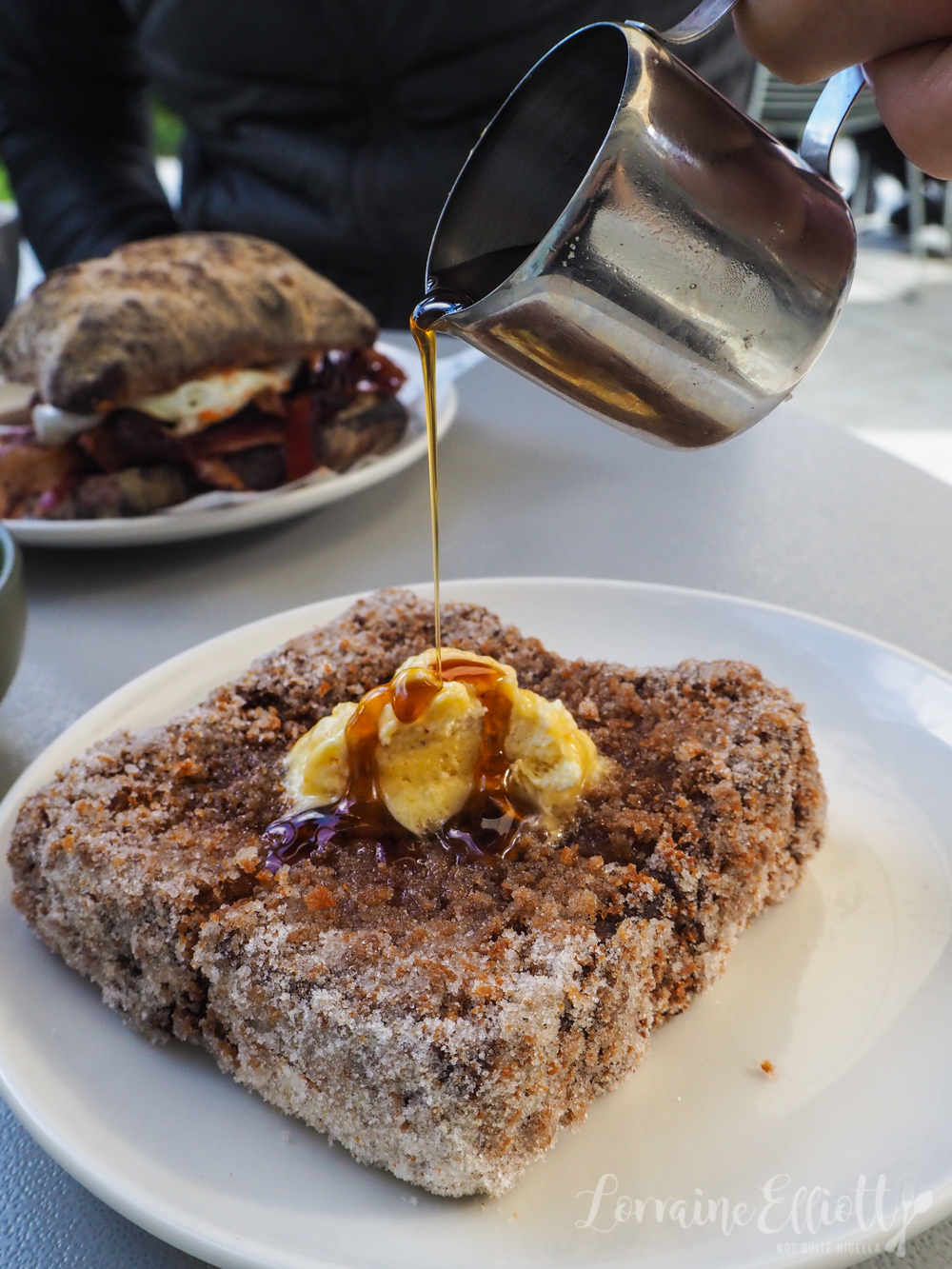 Some of the item names invite curiosity and I was drawn to the fried custard bread because I wanted to see what it was. It comes out resembling a piece of sugar dredged French toast but when you cut into it it looks like custard. It's their version of Spanish Leche Frita and involves making a firm custard and dredging it in crumbs and then frying it and then dusting it with cardamom sugar and adding some whipped brown butter and some kithul syrup on top. It's intensely rich and is best shared in a group as you would need a very sweet tooth to devour this by yourself (it's traditionally served in little squares). 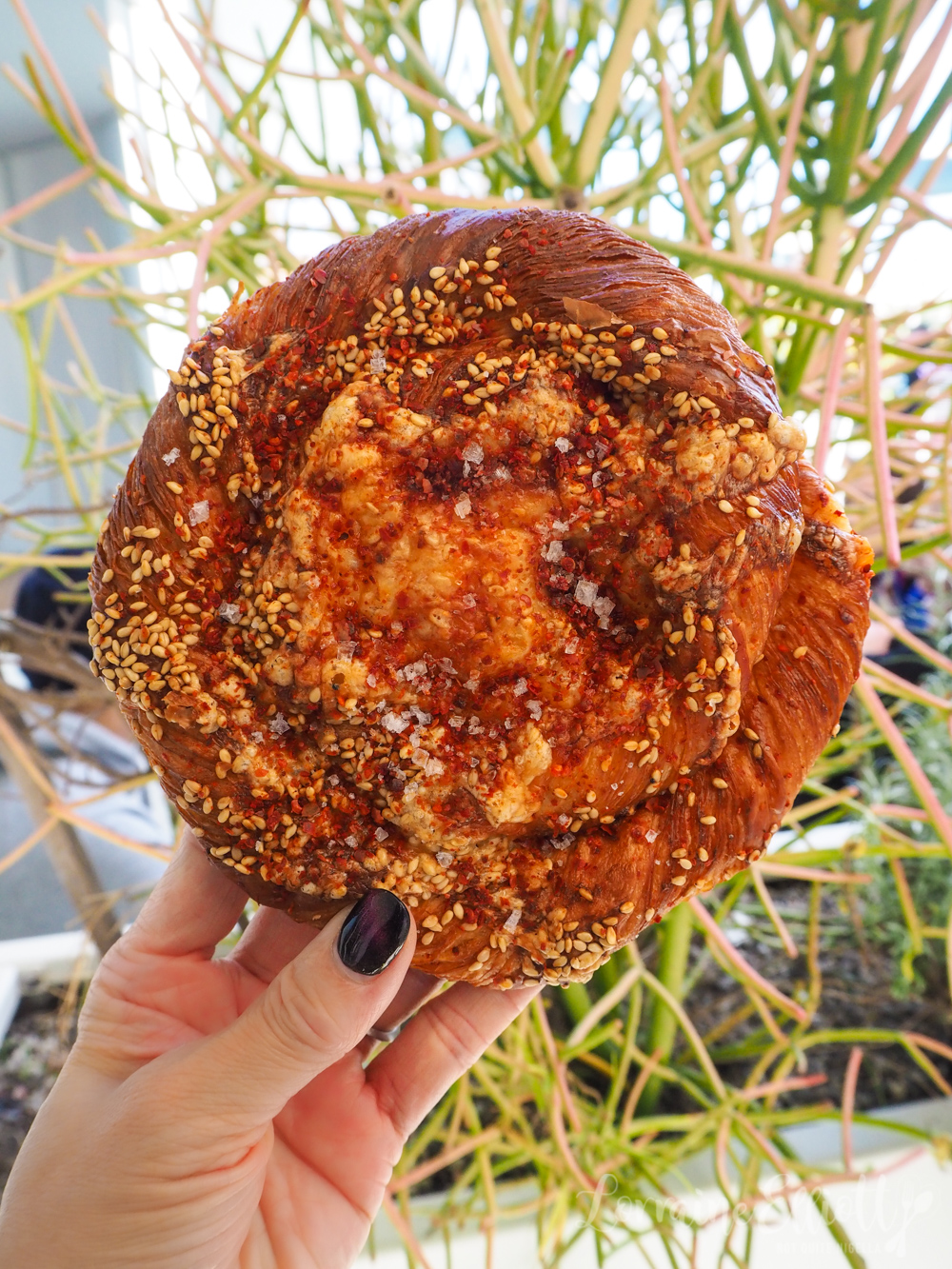 While I enjoyed the eat in items, I think my picks are from the pastry display and none of these disappoint. The Aleppo Pepper Asiago cheese scroll is made of beautifully buttery pastry twisted into a scroll with a happily unsubtle amount of Aleppo pepper and crispy, melted Asiago cheese. YES!! 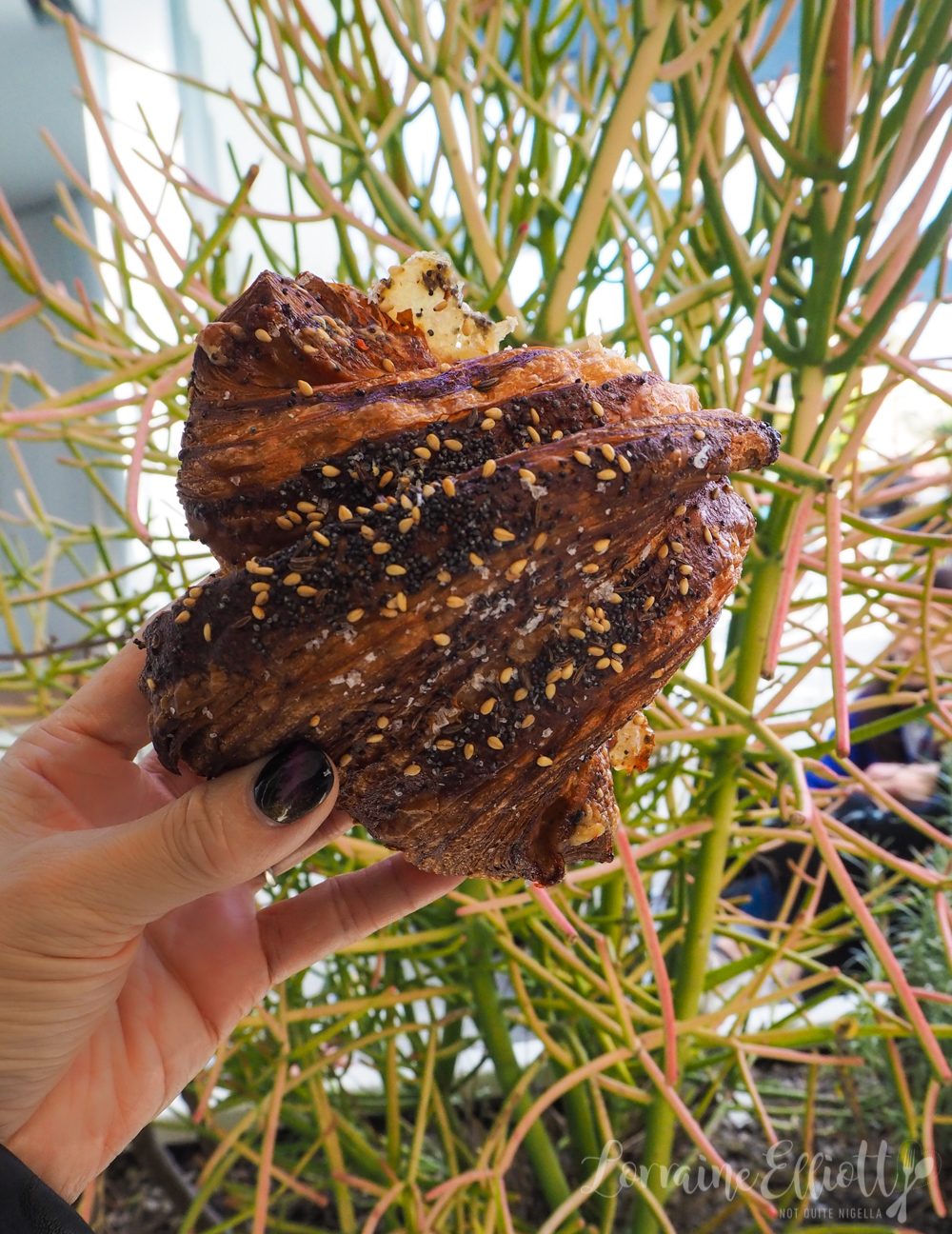 I also have a lot of love for their LP's ham and gruyere croissant with plenty of poppy seeds and just the right amount of ham and cheese and of course that buttery layered pastry...

So tell me Dear Reader, how often do you go back to a place to try out other dishes? What time do you usually go out for breakfast or brunch on the weekend?