Welcome to our Australian Outdoor Christmas! 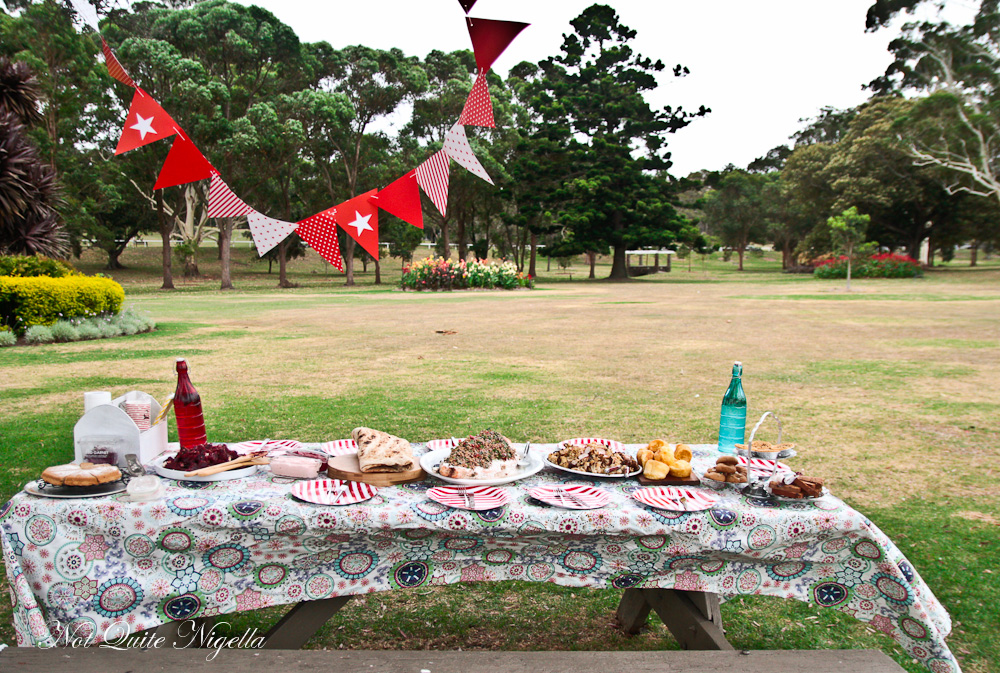 Family gatherings come thick and fast at this time of the year. Just a couple of weeks before Christmas we had a family get together in the park for Mr NQNs sisters baby blessing aka baby shower. Both women and men were invited. 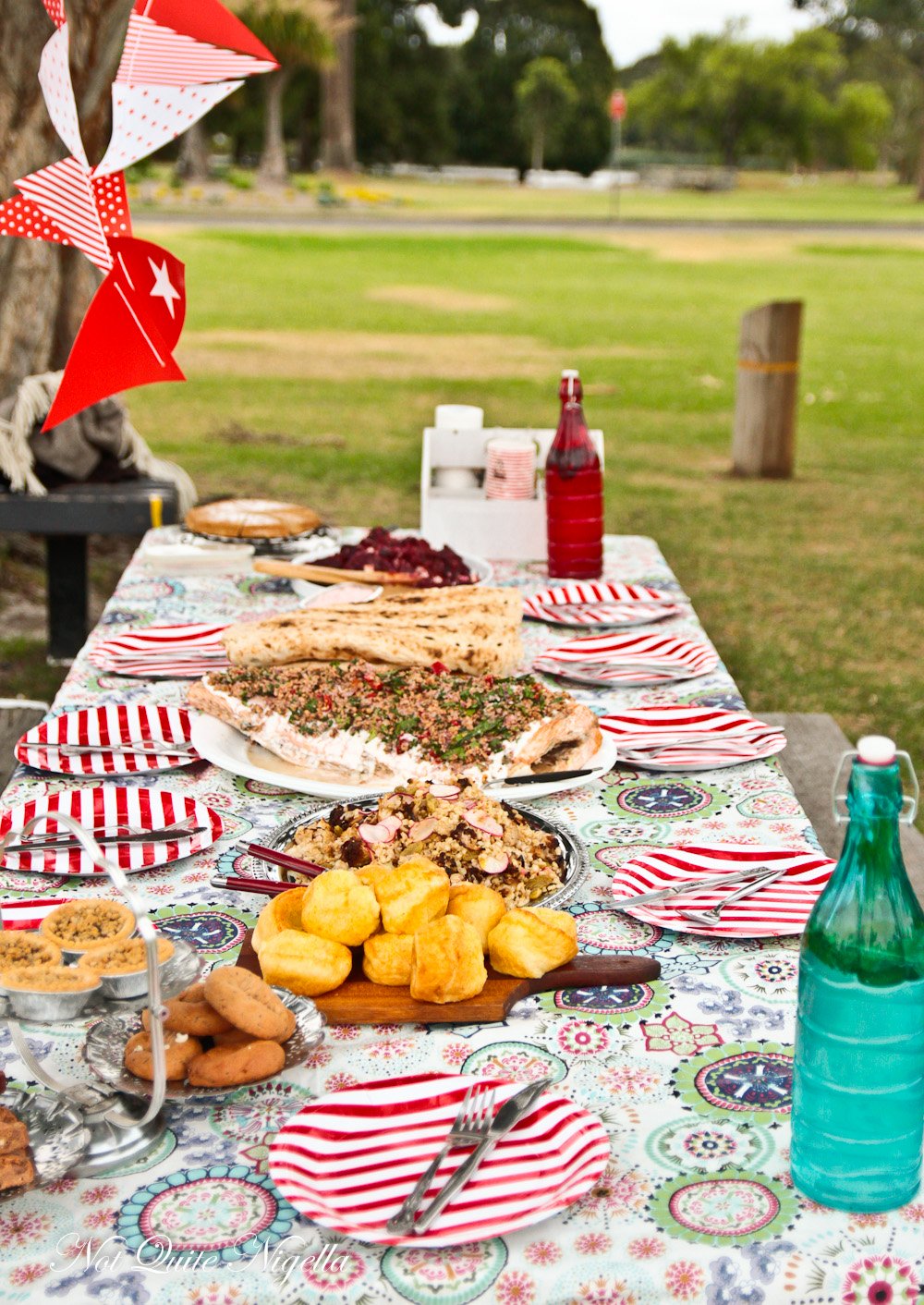 Being a hippy family means that things are much less formal than usual. The baby blessing was held on picnic rugs and accordions and violins were brought out to provide the music. I'm sure that my parents in their very non hippy ways might have muttered "My god are we related to gypsys?" They seemed a bit bewildered by it all. 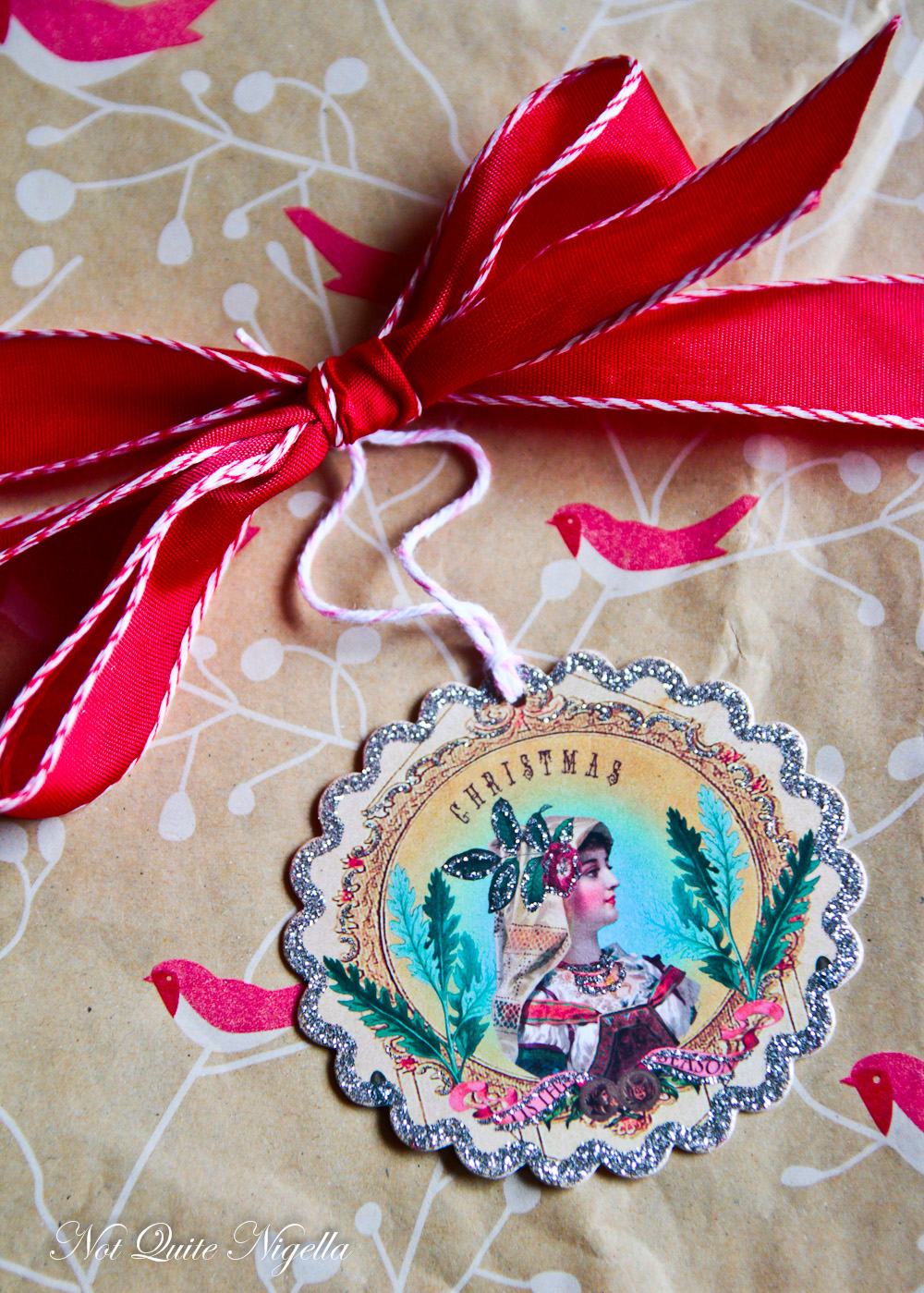 Mr NQN's father Roger arrived a couple of hours later (on "Roger time") and he observed Amaya's friend with her 10 month old girl swathed in pink. "What's the little boys name?" he said completely not picking up on the colour cues. The baby girl's mother looked at him astonished. 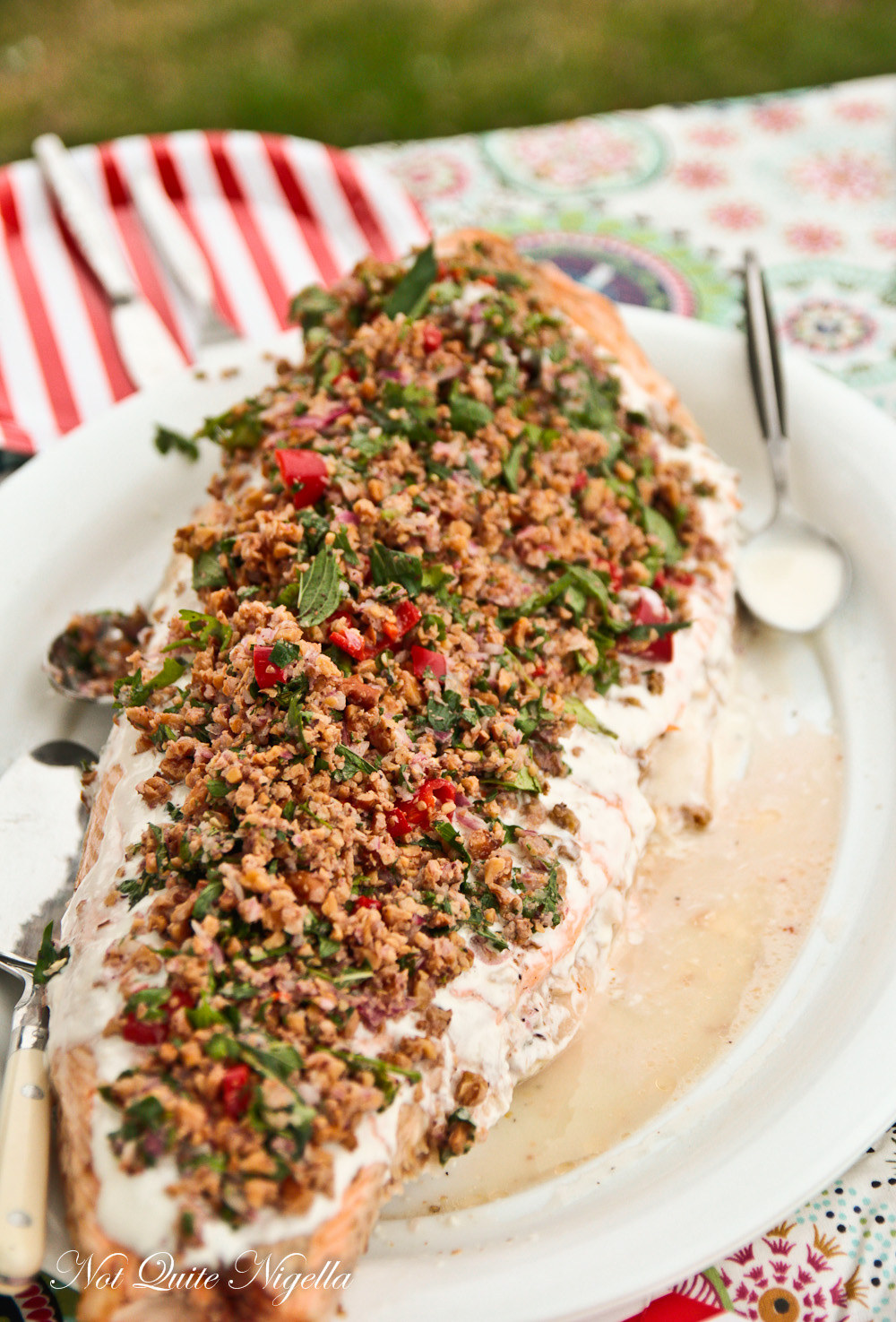 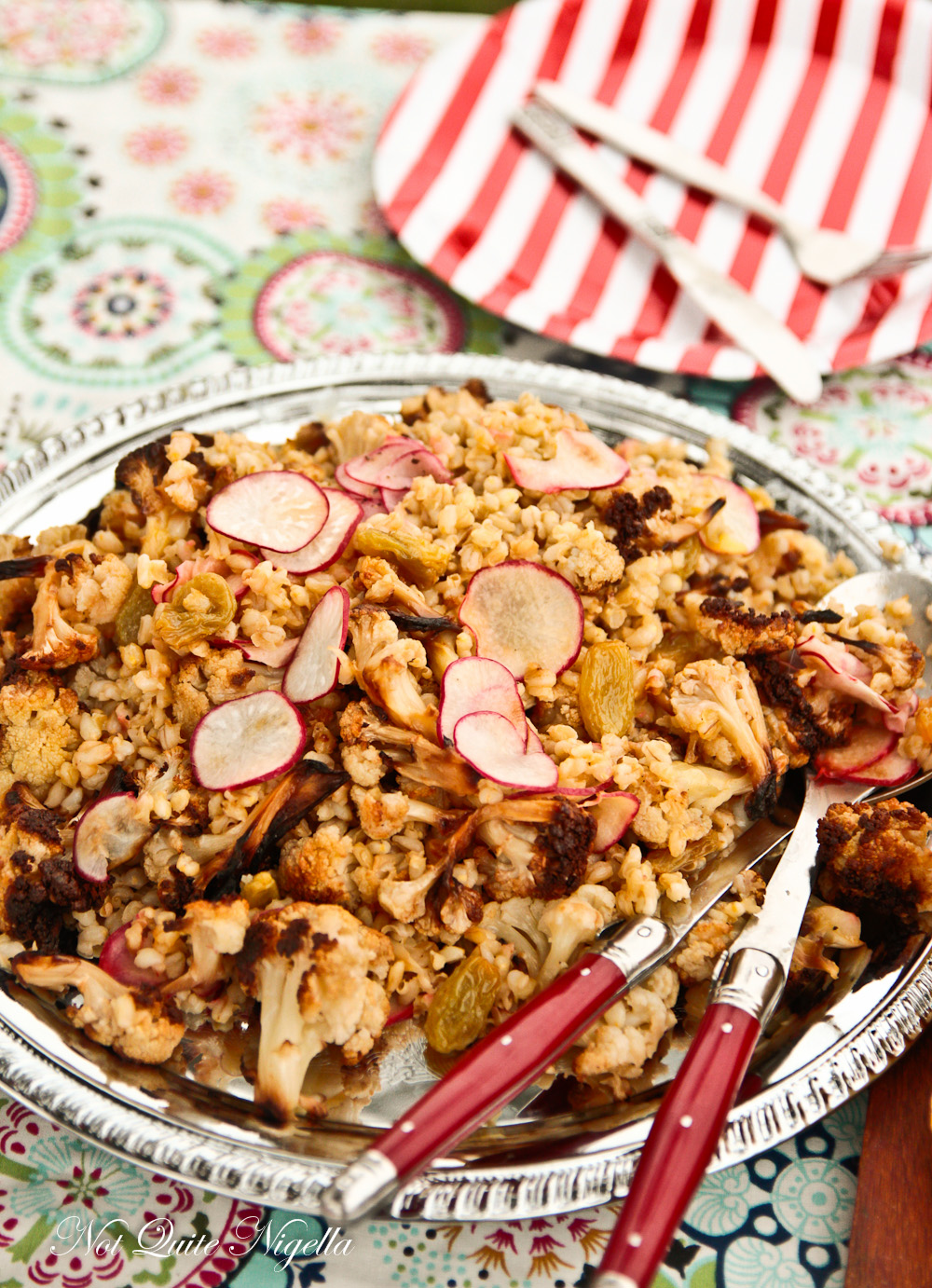 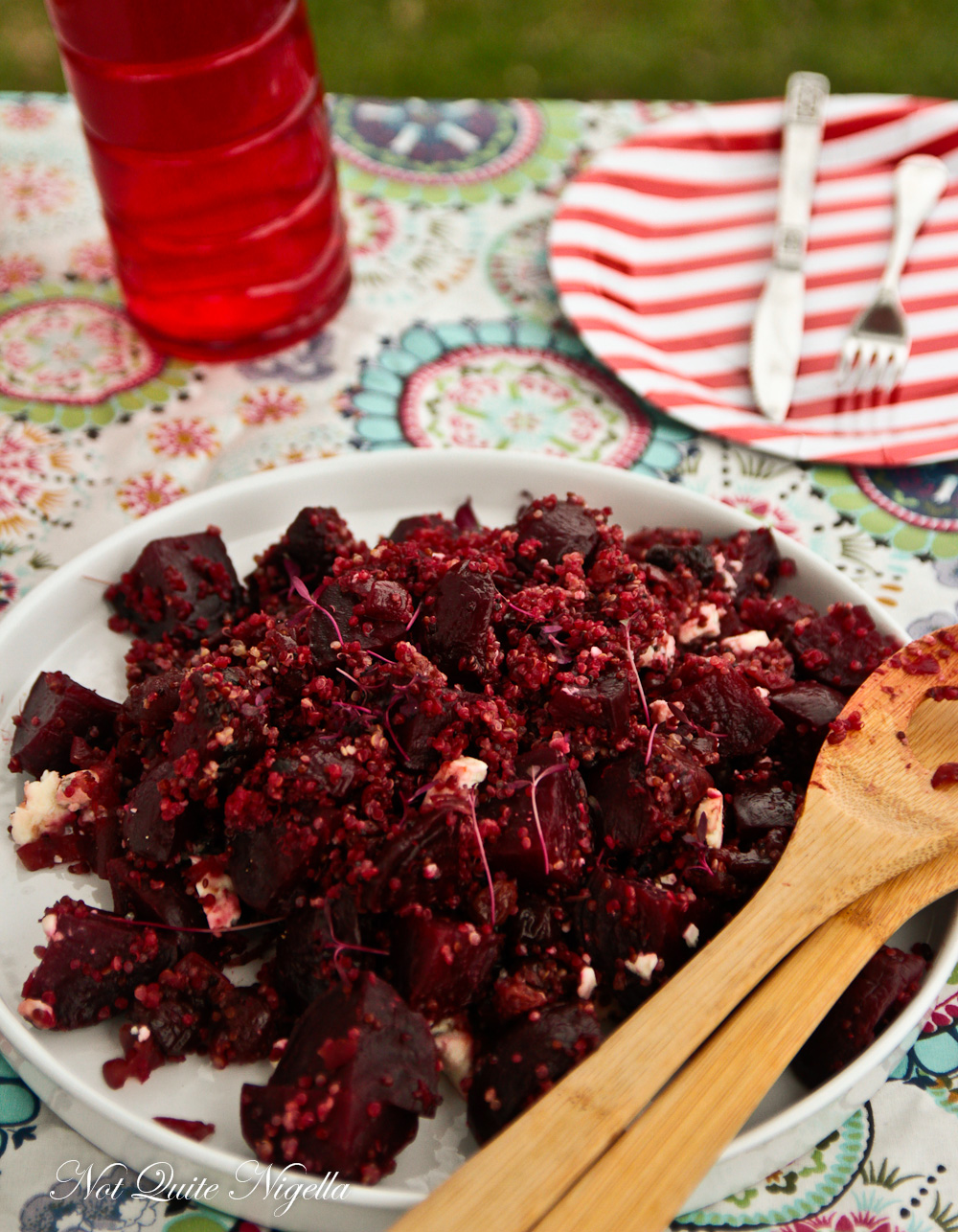 In any case, that gathering was the calm before the storm. A few days before Christmas the entire Elliott family decided to implode. One by one they opted out of Christmas celebrations. What should have been a nice time with family became a seething hotbed of resentment, demands, disorganization and passive aggressive behaviour. One demanded one thing while another demanded another and neither would budge. 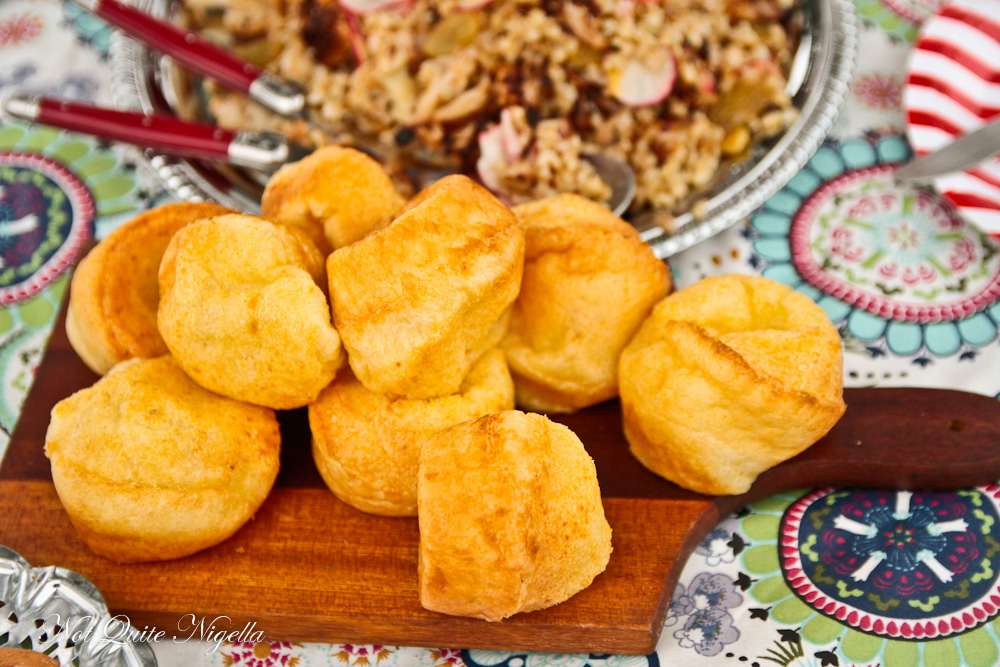 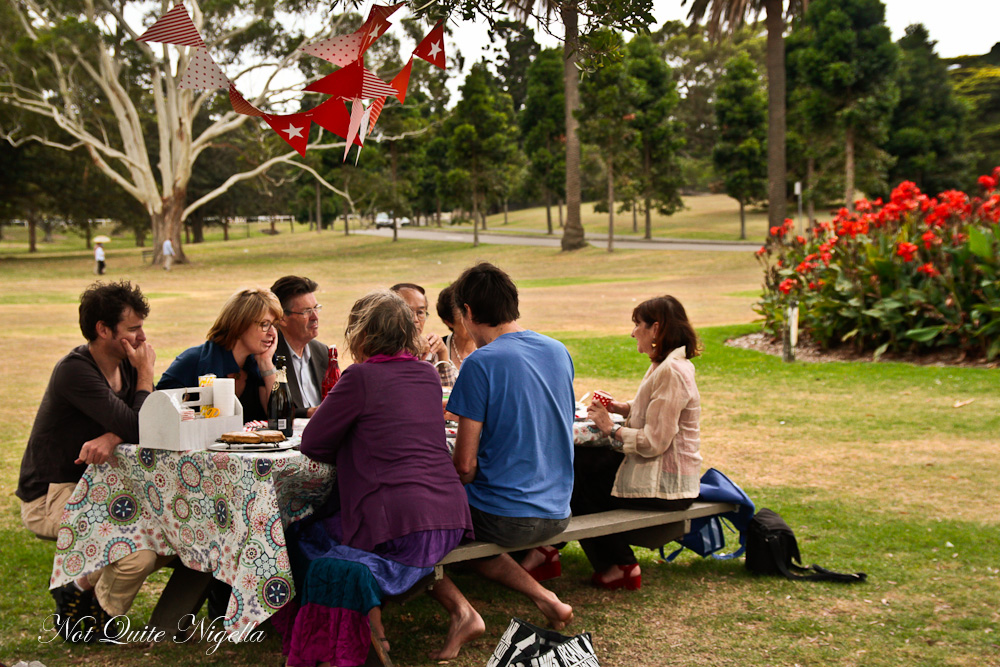 So we did what anyone at the end of their tether did, instead we celebrated with people that understood the genuine meaning of Christmas. Friends are like family, except you actually choose them. We had Queen Viv, her son Michael, Julie, Alistair and my parents. And Mr NQN's mother Tuulikki, perhaps befuddled and confused by her own family's behaviour decided to come along to our Christmas celebration. 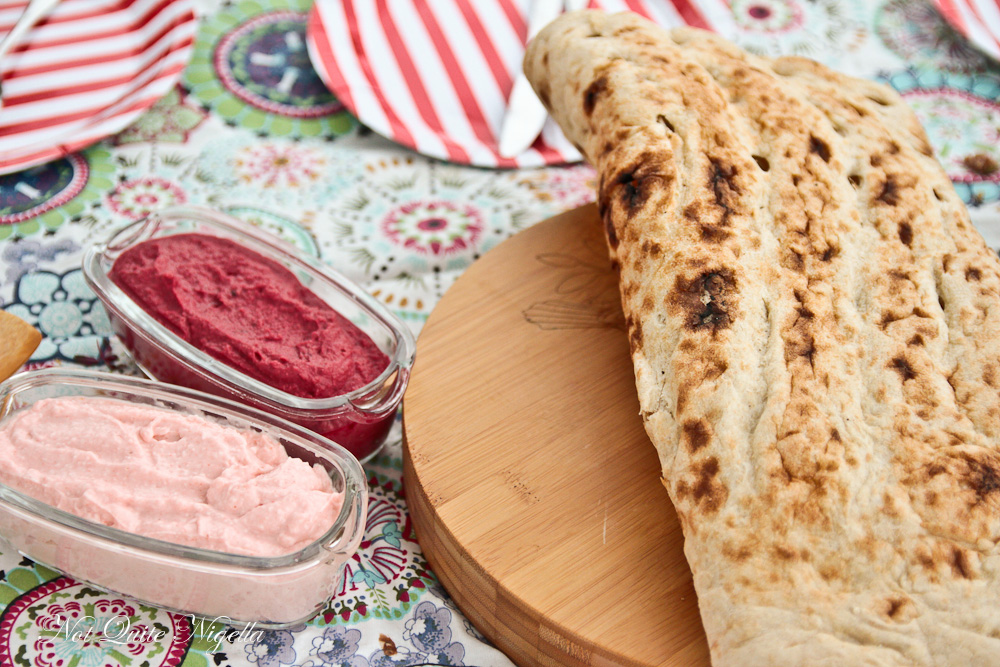 It was with a nervous wait that I watched the weather. We had decided to go with a hot weather Christmas but of course the weather was hot one day and then cool the next. The food centrepiece would be a whole baked salmon accompanied by salads and pavlova. The salmon dish is called salmon tarator and it's a baked salmon covered with a garlic yogurt sauce, toasted walnuts and fresh herbs and not only is it a show stopper but it's really easy too. 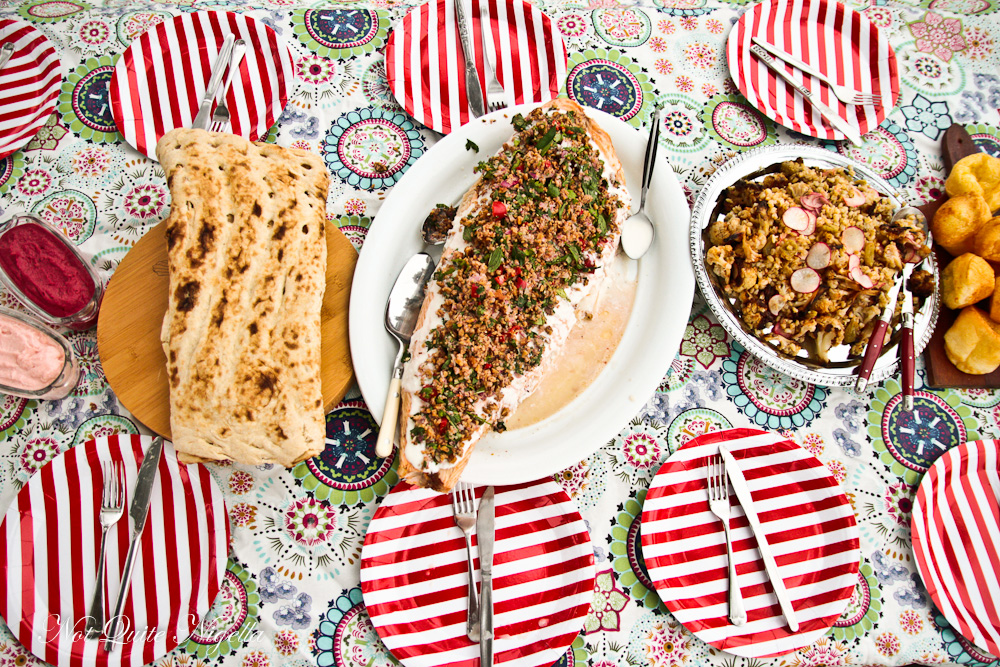 And by Christmas miracle that morning everything was ready two hours early (which never happens, trust me ;)). I had saved time by doing a few things the night before (the pavlova, roasting the beetroot and cooking the barley and quinoa) and that morning I baked the salmon. It was an enormous specimen at 4.5 kilos and I couldn't even fit it in my oven. I had to cut the head and tail off (which only affirmed to me that I don't think I could murder anything) and set it off to bake while I made the garlic sauce and the herb topping. 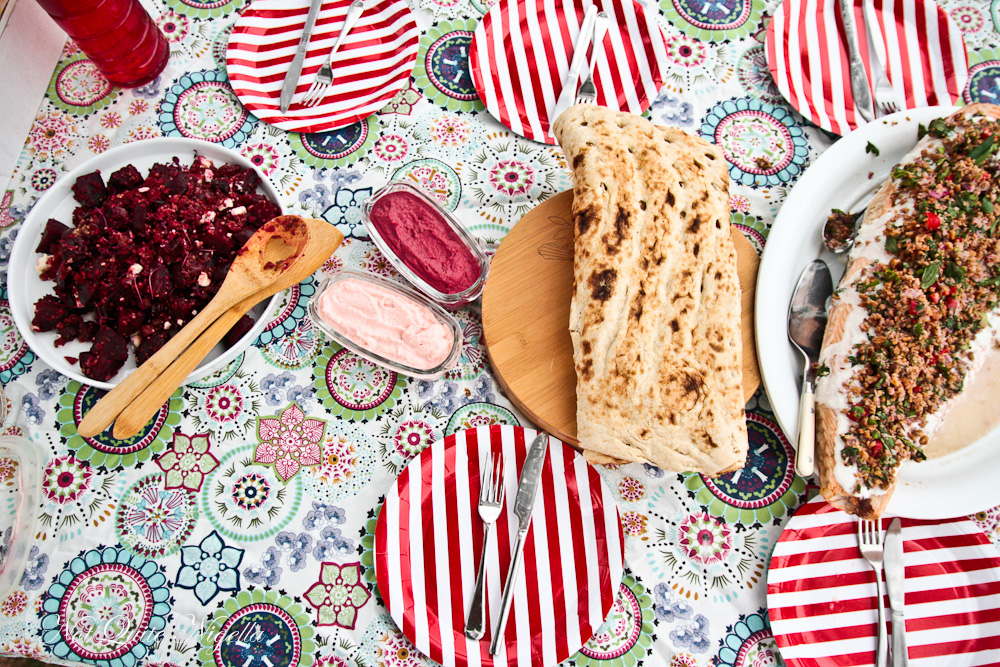 With the car laid down with supplies, we drove to nearby Centennial Park where other groups of families had already staked out areas. We found a picnic spot and set up while Mr NQN went home to let our guests know that we had a little Christmas surprise for them - an outdoor Christmas! There were nine of us assembled around the table and we had a wonderful time talking about all things food and bizarre around the world. 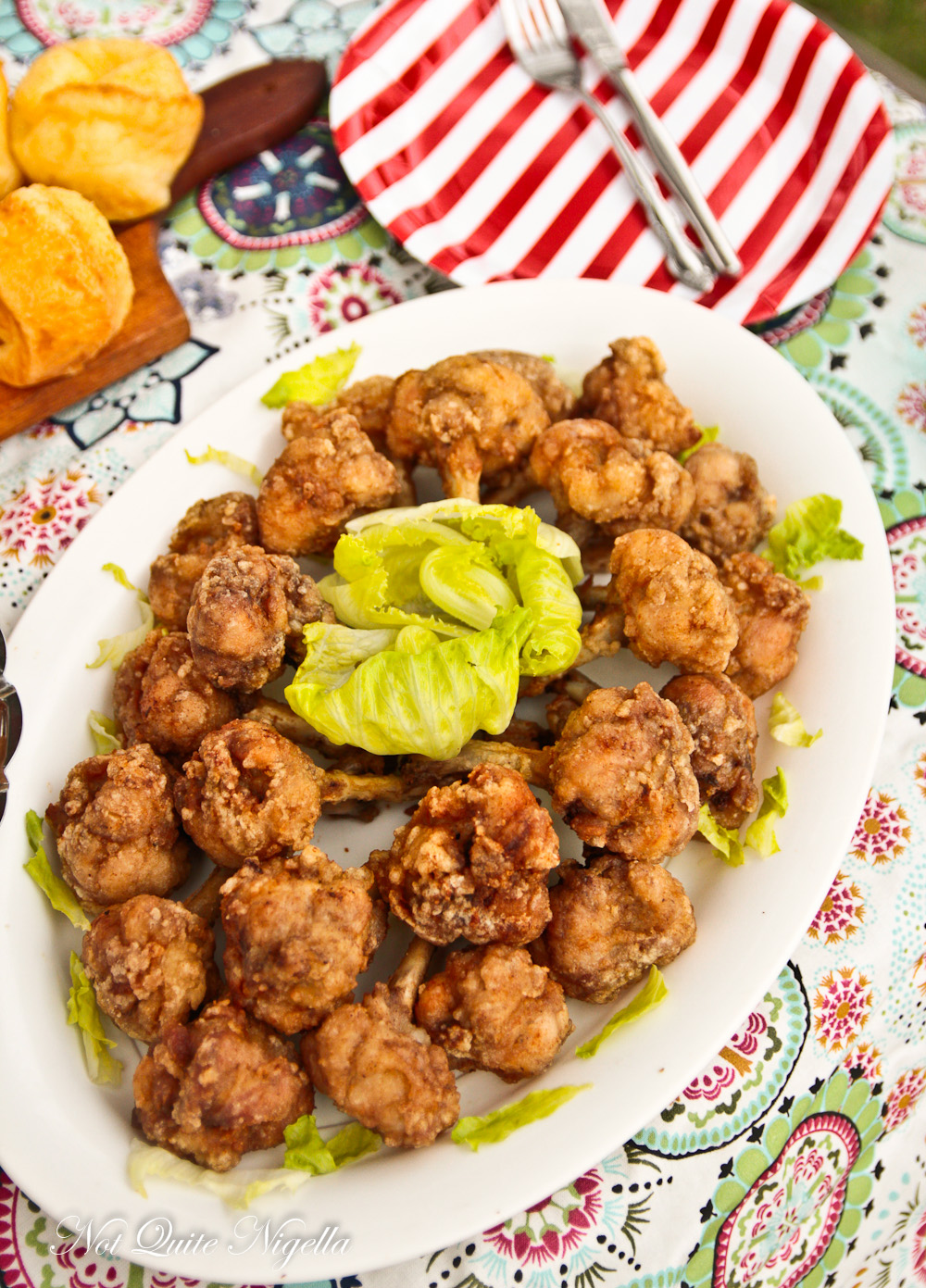 Queen Viv told us a tale of how she had once caught an octopus and the ensuing battle to get the thing back into the water while trying to dislodge one of its many arms that had suctioned themselves on the boat. Alistair talked about how Julie had finally let him in the kitchen and over his cooking career he had made 100 pavlovas. Mr NQN and Michael talked about cycling and Tuulikki talked about monkeys while my parents laughed. 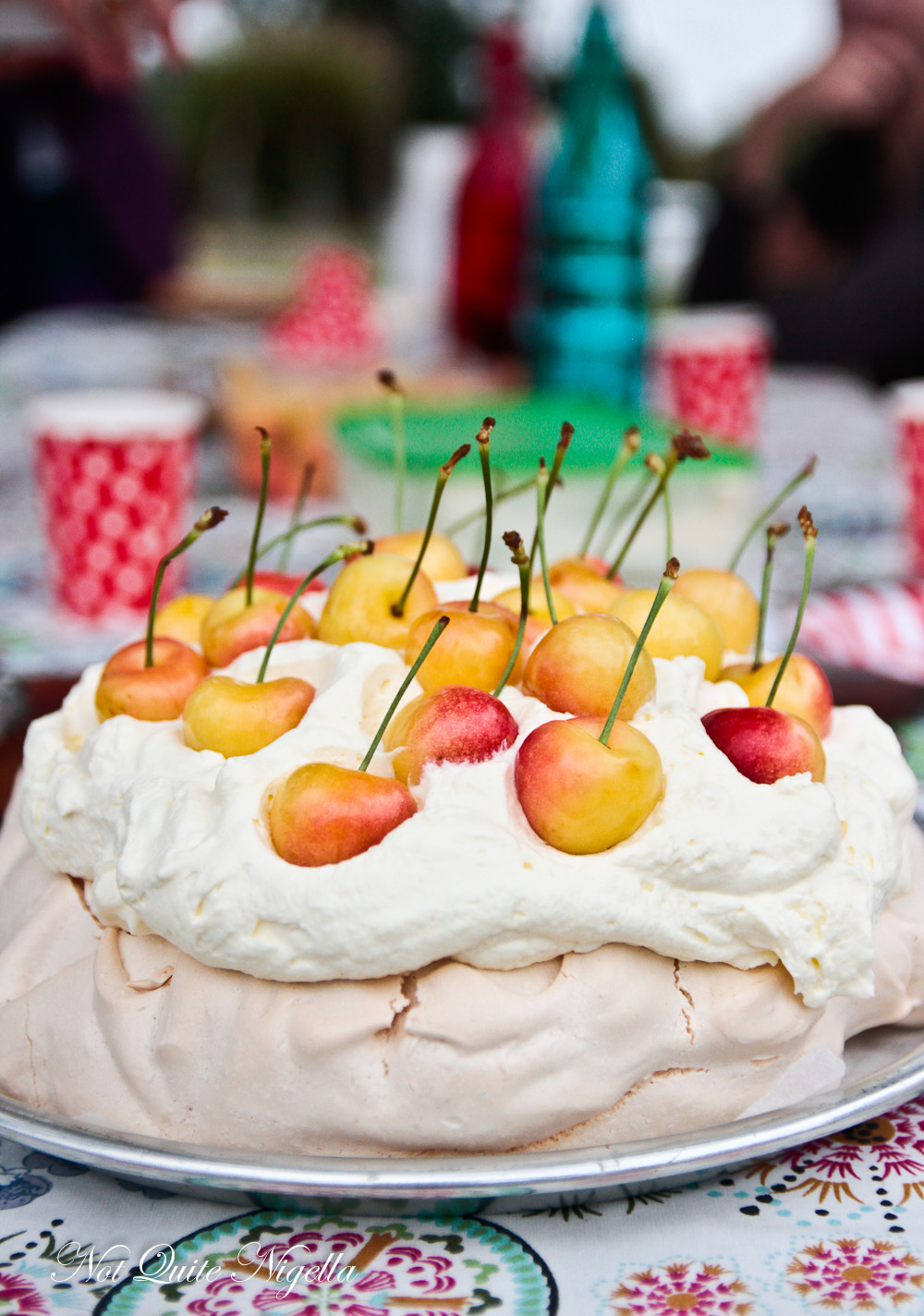 I prepared the pavlova just before serving as the birds that stalked nearby looked as though they could take us on. Alas the pavlova looks a bit rough and ready but it's the taste that counts right? The pavlova was followed by one of the things that I look forward to most during Christmas is my Dear Reader Matilda's Italian Christmas cookies! Every year I dance with happiness when these come in the mail. There was much laughter, affection and food - the way that Christmas should be. 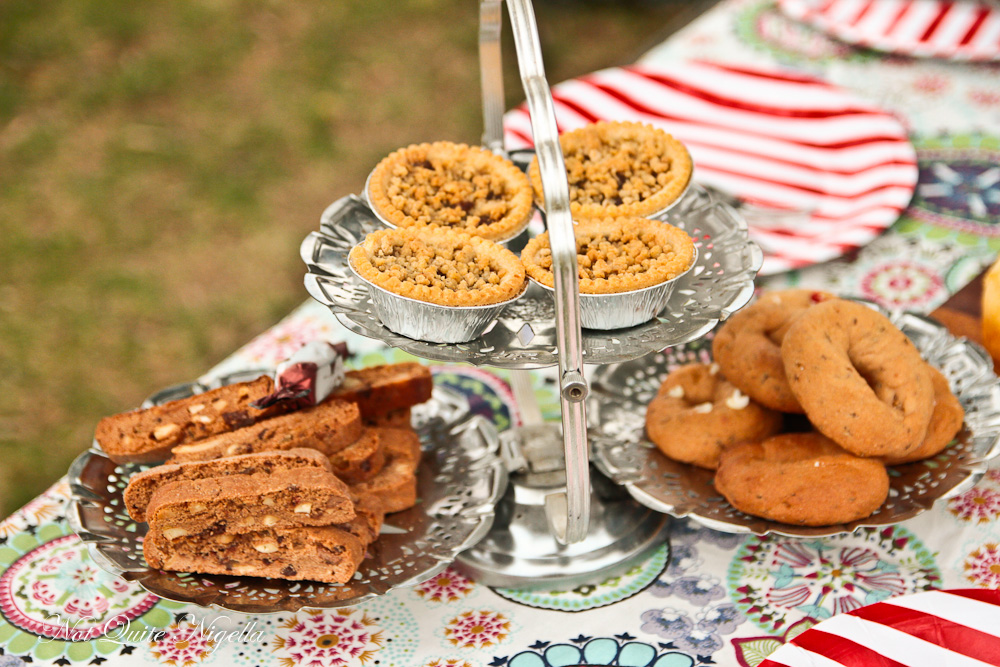 And if your Christmas is stressing you out, spend it with those you love and who appreciate you! And if all else fails, watch this video!

So tell me Dear Reader, what do you want most in the world for Christmas?

Merry Christmas Dear Readers and I hope that you have a truly splendid and wonderful Christmas. Thank you for all of your support this year and thank you for reading! 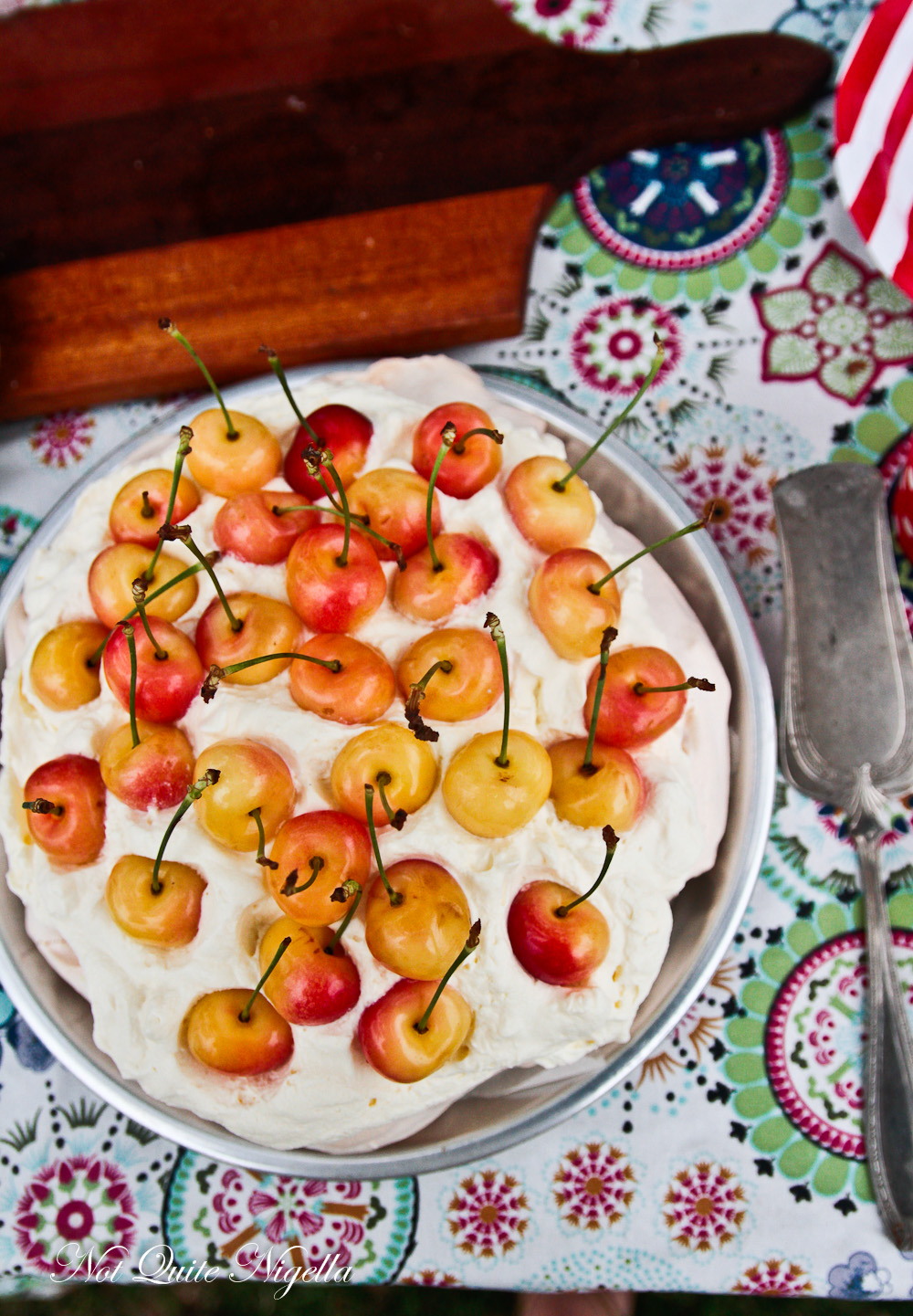 Adapted from a recipe by Greg Malouf 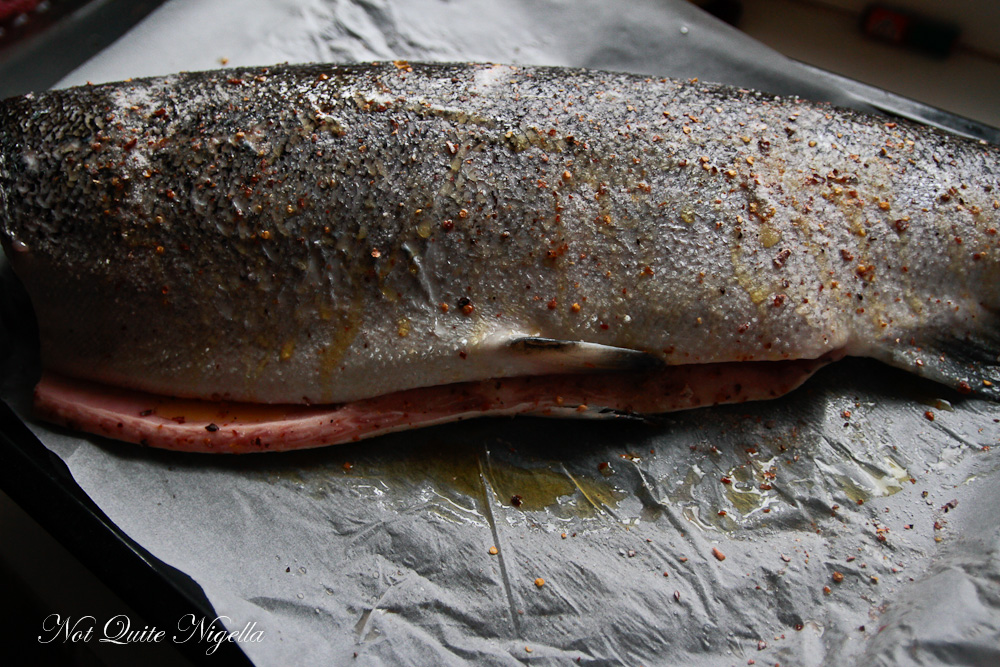 Step 1 - Have your fishmonger clean and gut the fish. Rinse it under cold water. Pat dry and allow to come to room temperature. Preheat oven to 150C/300F. Place fish on a large sheet of baking parchment and season with salt and pepper and rub with a few tablespoons of oil. Wrap up and bake for 40 minutes and then turn over and bake for 35 minutes or until fish is cooked through. Unwrap and cool to room temperature. 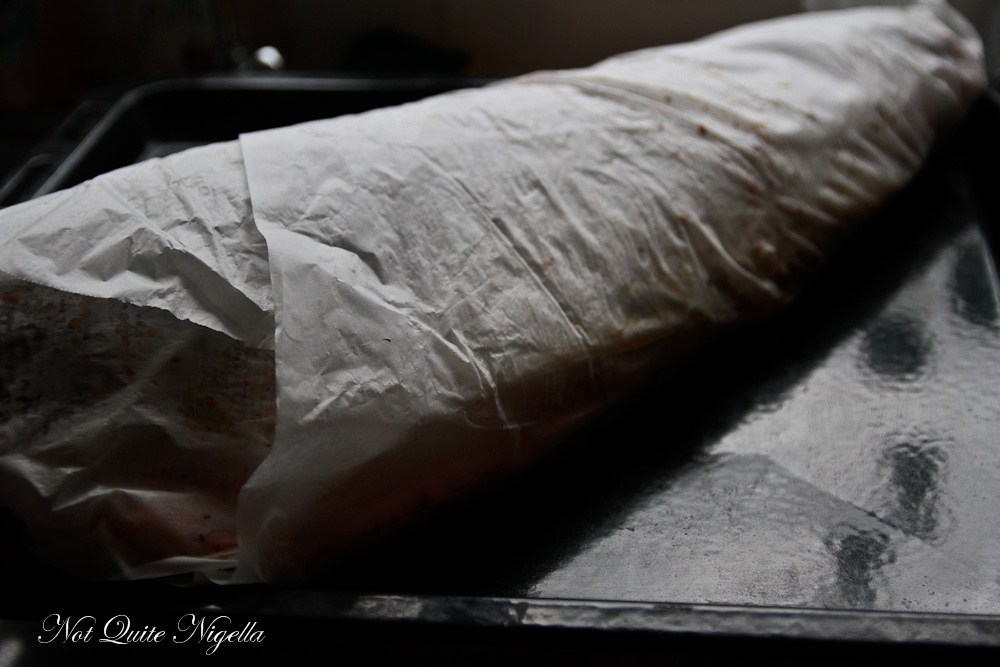 Step 2 - While the fish is cooking, make the dressing by combining all of the ingredients in a food processor and blending until smooth. Set aside. 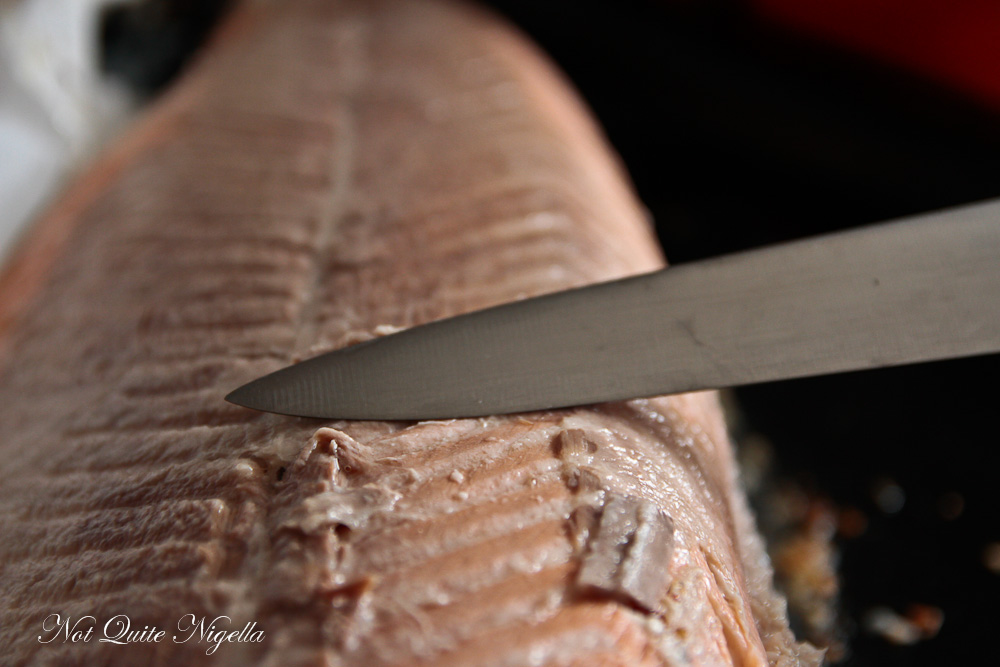 Step 4 - Cut along the head from the back along the tail and remove the skin. With a knife, gently remove the grey flesh exposing the pink flesh. Coat with some of the yogurt dressing and then cover with the herb mixture. 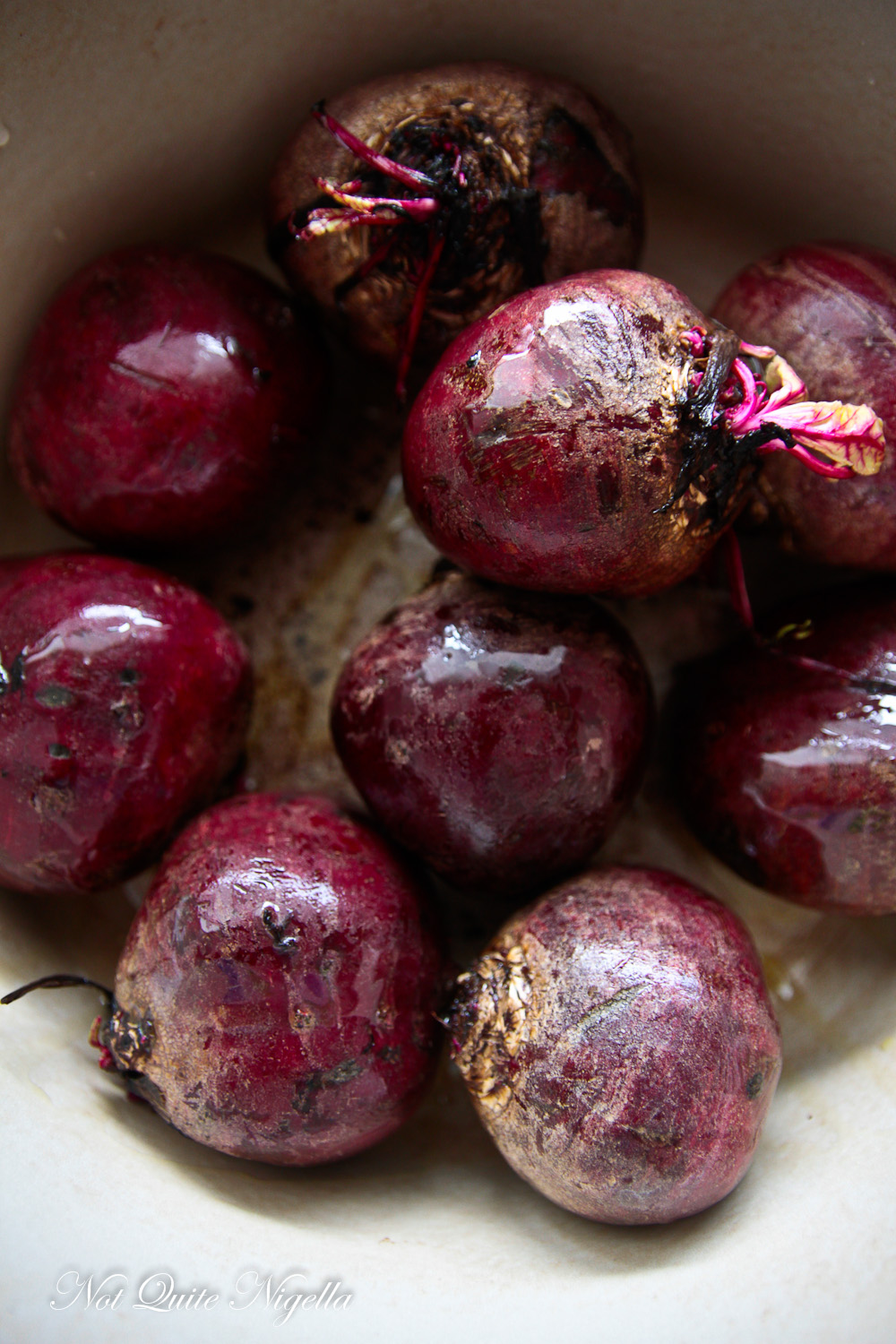 Step 1 - Preheat oven to 180C/350F. Wash beetroot bulbs and place in a cast iron pot with the oil and place lid on top. Roast for 60-90 minutes until a knife can pierce through them easily. Cool. Peel the skin - it should slip off easily.

Step 2 - While the beetroot is roasting, cook the quinoa by soaking it in 1 cup of water for 15 minutes and then simmering it for 15 minutes. Remove from heat and allow to cool for 10 minutes before fluffing with a fork. Cool.

Step 3 - Cut the beetroot into eights or bite sized pieces. Toss with the cooled quinoa and chutney. Add small cubes of blue cheese and walnuts and herbs. Season with salt and pepper and dot with microherbs.

Adapted from a recipe from Saffire Freycinet Lodge 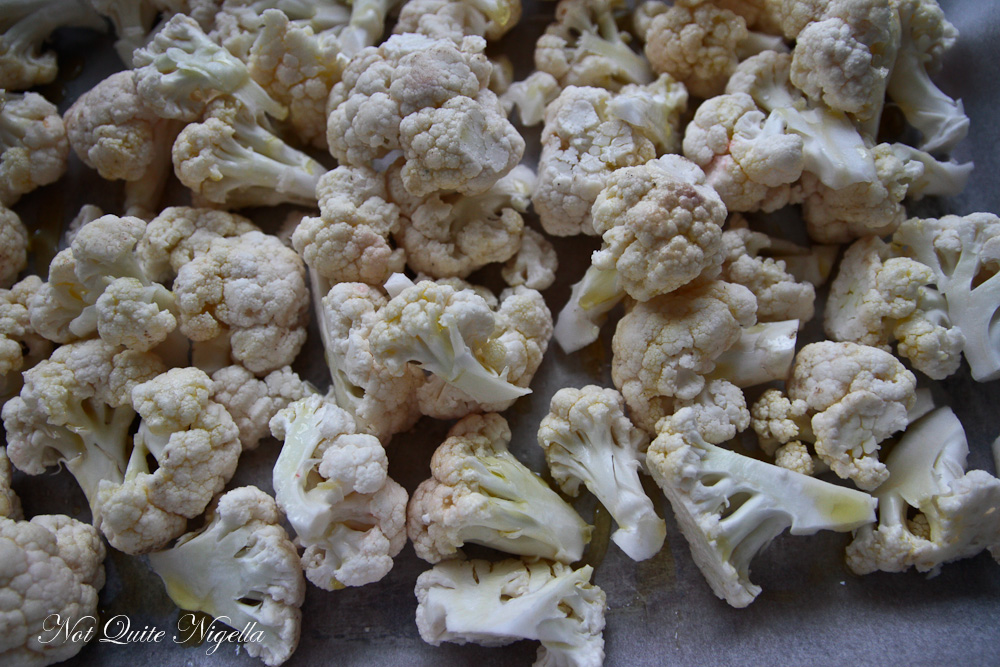 Step 1 - Preheat oven to 200C/392F. Line a large baking tray with parchment and place the cauliflower florets on top. Drizzle with oil and roast until golden. Season with salt, pepper and sugar. 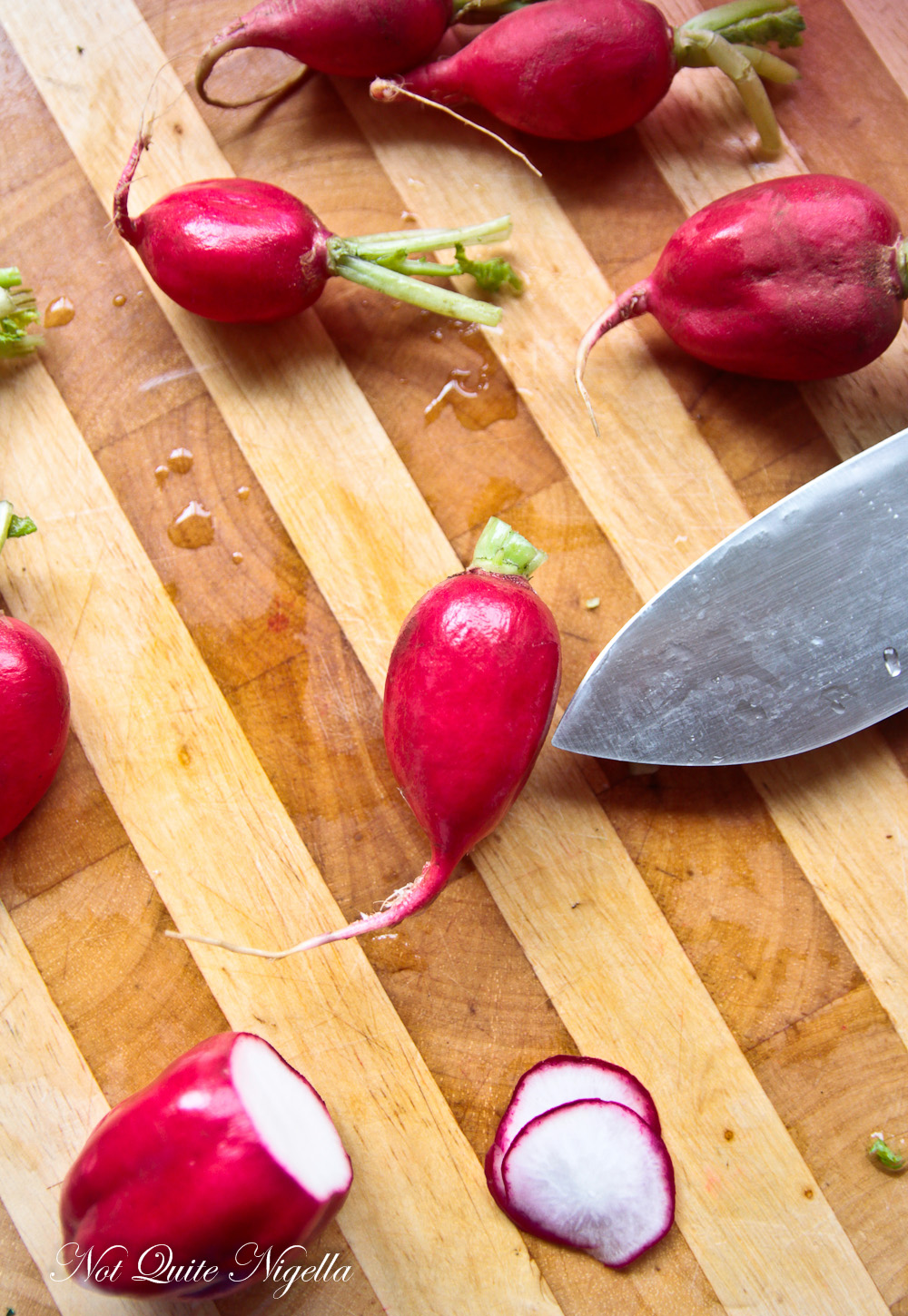 Step 2 - Cook the pearl barley by simmering 1 cup of pearl barley with 3 cups water for 35 minutes. Drain and reserve the water (add some sugar to this for a delicious drink). 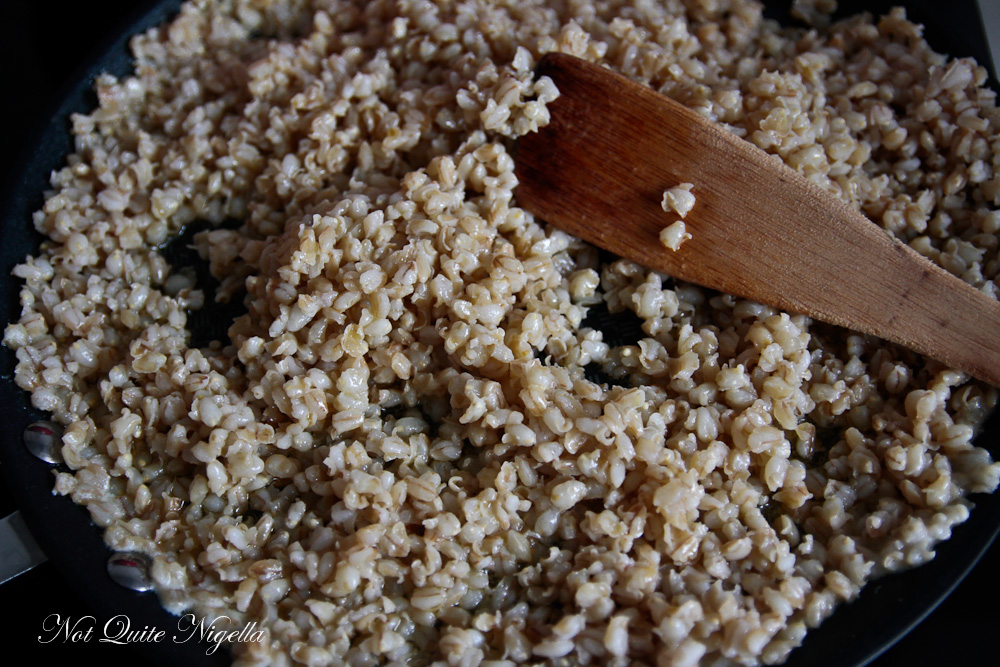 Step 3 - Fry the drained barley with butter and toss with the cauliflower, green raisins, radishes, lemon juice and orange blossom water. Season with salt and pepper. 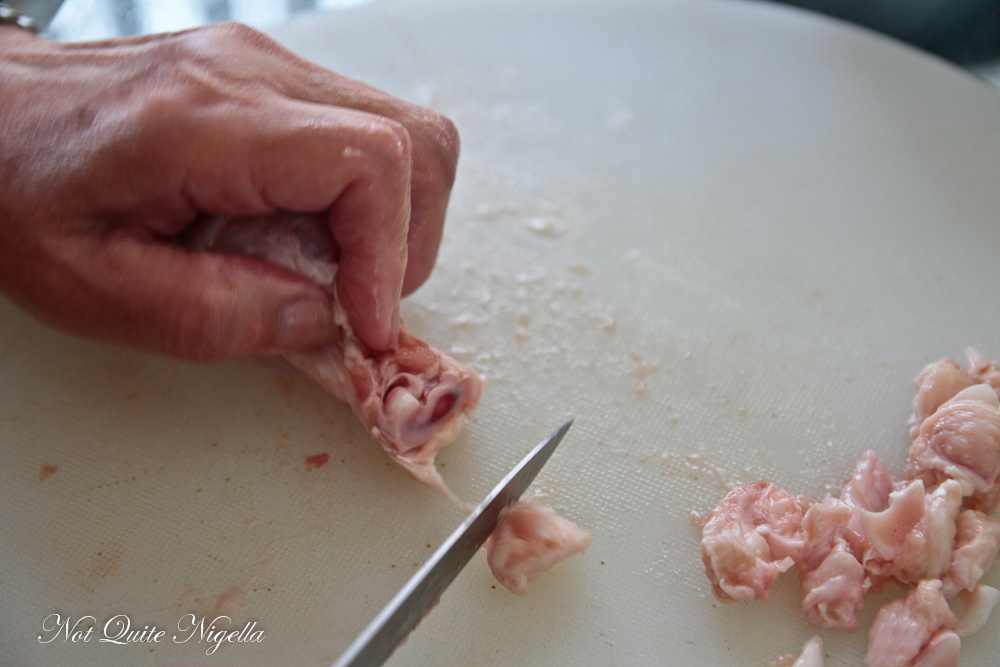 Cutting off the bottom of the drumstick 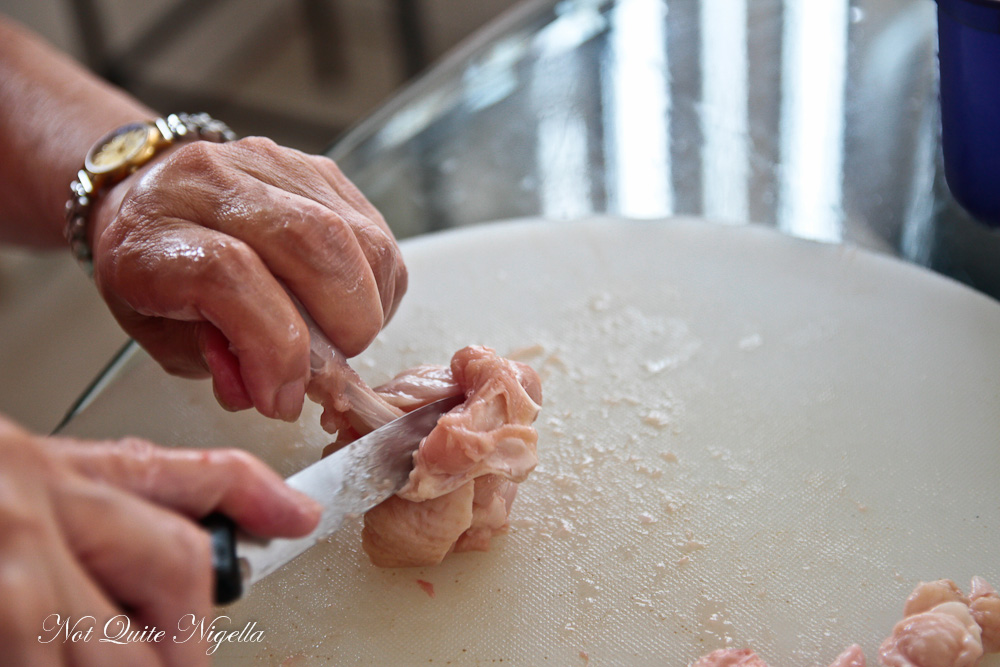 Scraping the meat and skin 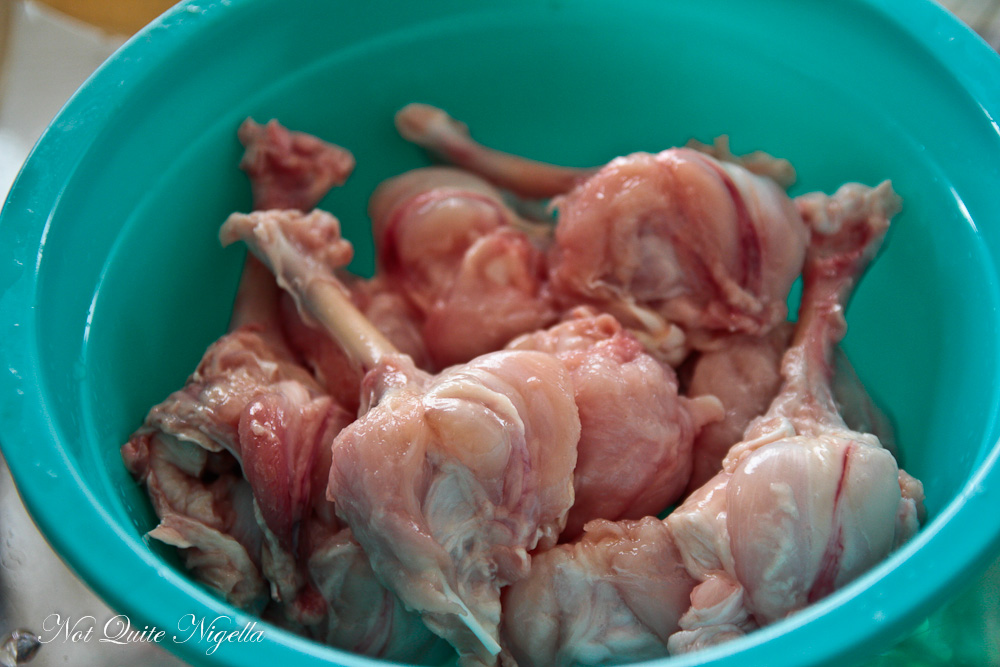 Step 1 - Cut the drumlets are shown by slicing away the bottom and then pulling up the meat to form a lollipop. Scrape the meat from the bone with a sharp knife.

Step 3 - Add a beaten egg to the marinated lollipops. Mix well. Roll each lollipop in a container of corn-flour. Make sure each piece is fully covered with corn flour.

Step 4 - Heat a deep fryer with oil and 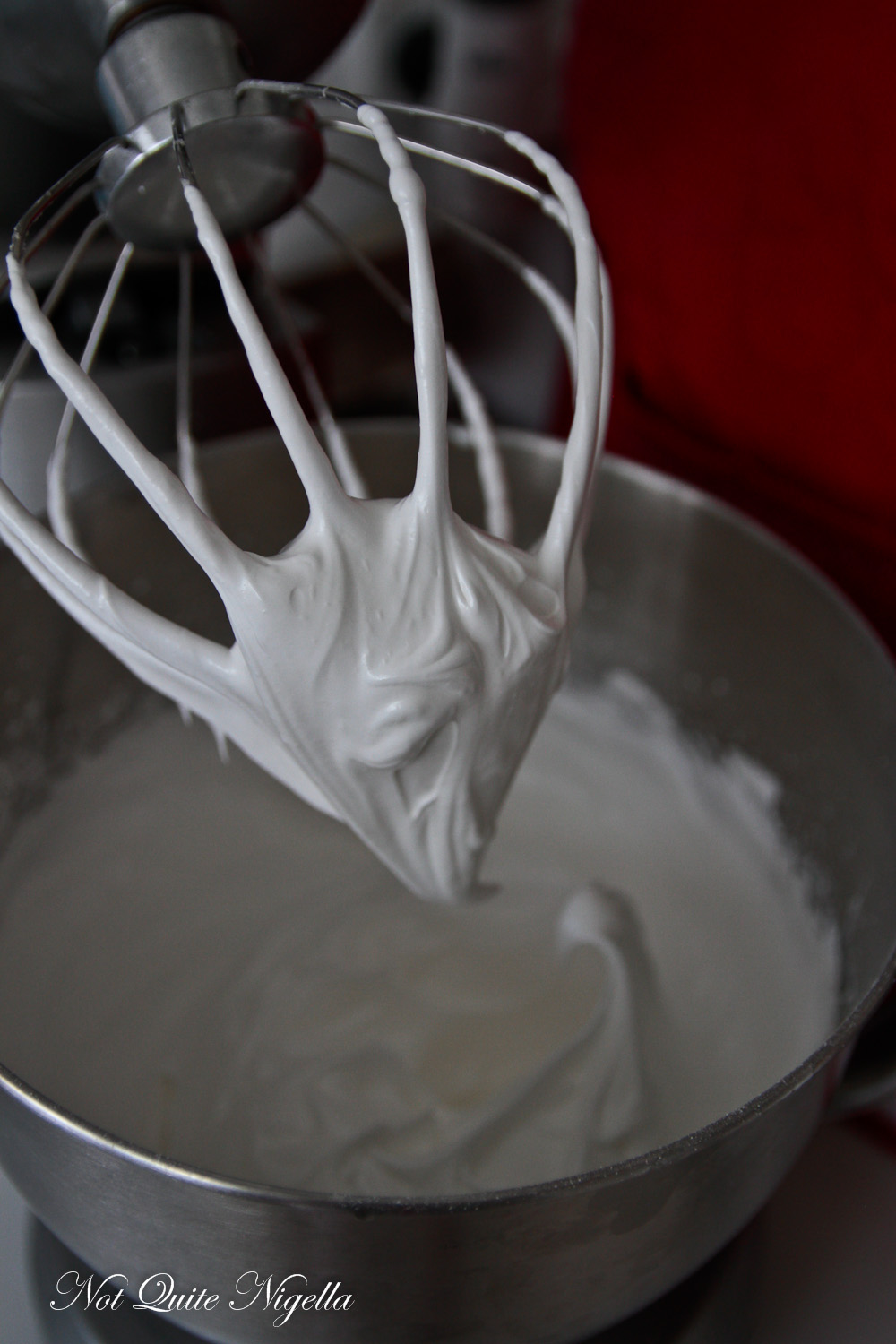 Step 1 - Preheat oven to 200c/392F. Mark a circle on a sheet of baking paper. Make sure that mixing bowl and beaters are thoroughly clean (I always wash them with detergent and very hot water beforehand and leave it to air dry). If there is any fat or oil on these your pavlova will not beat up stiffly.

Step 2 - Separate yolks from whites, ensuring that no yolk goes into the whites at all. Beat in electric mixer on low at first then increase speed gradually until it starts to get fluffy. Add vinegar and roughly 1/3 of the sugar by the tablespoon until the mixture turns dry looking. Then another 1/3 of the sugar and the cornflour gradually and beat until stiff and sugar has dissolved and then add the remaining sugar. Test by inverting the bowl, if the meringue does not move then it is ready. Spoon onto the prepared paper.

Step 4 - Whip the cream with the caster sugar until soft peaks form. Just before serving, dollop the cream on top of the meringue and top with cherries and lychees.