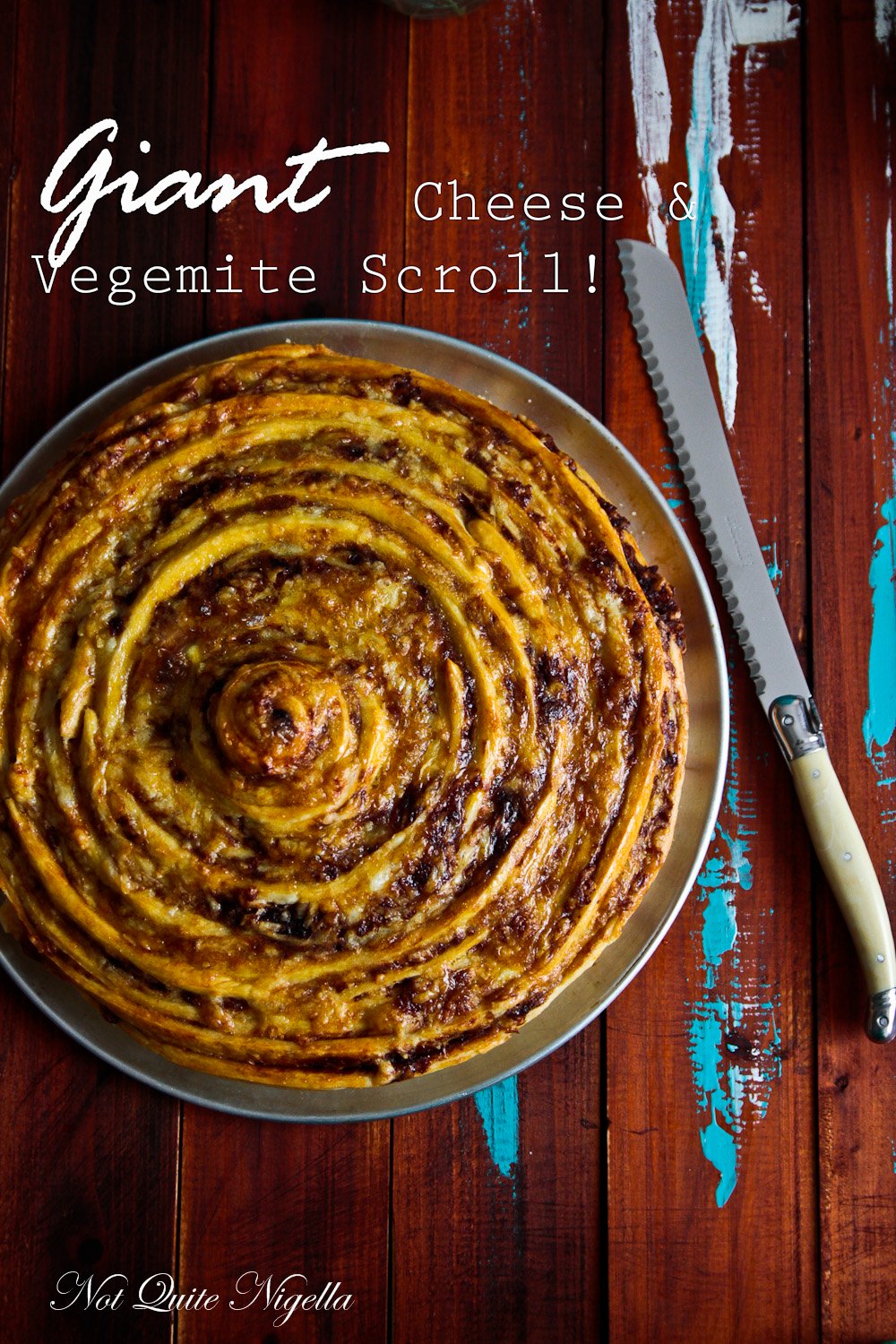 I was once asked to describe Vegemite to a North American. I thought about it, firstly trying to compare it to something that they might be familiar with. The main spreads that I could think of were peanut butter, jam or Nutella. But Vegemite? Well we're sort of on our own there (apart from the British and their Marmite). 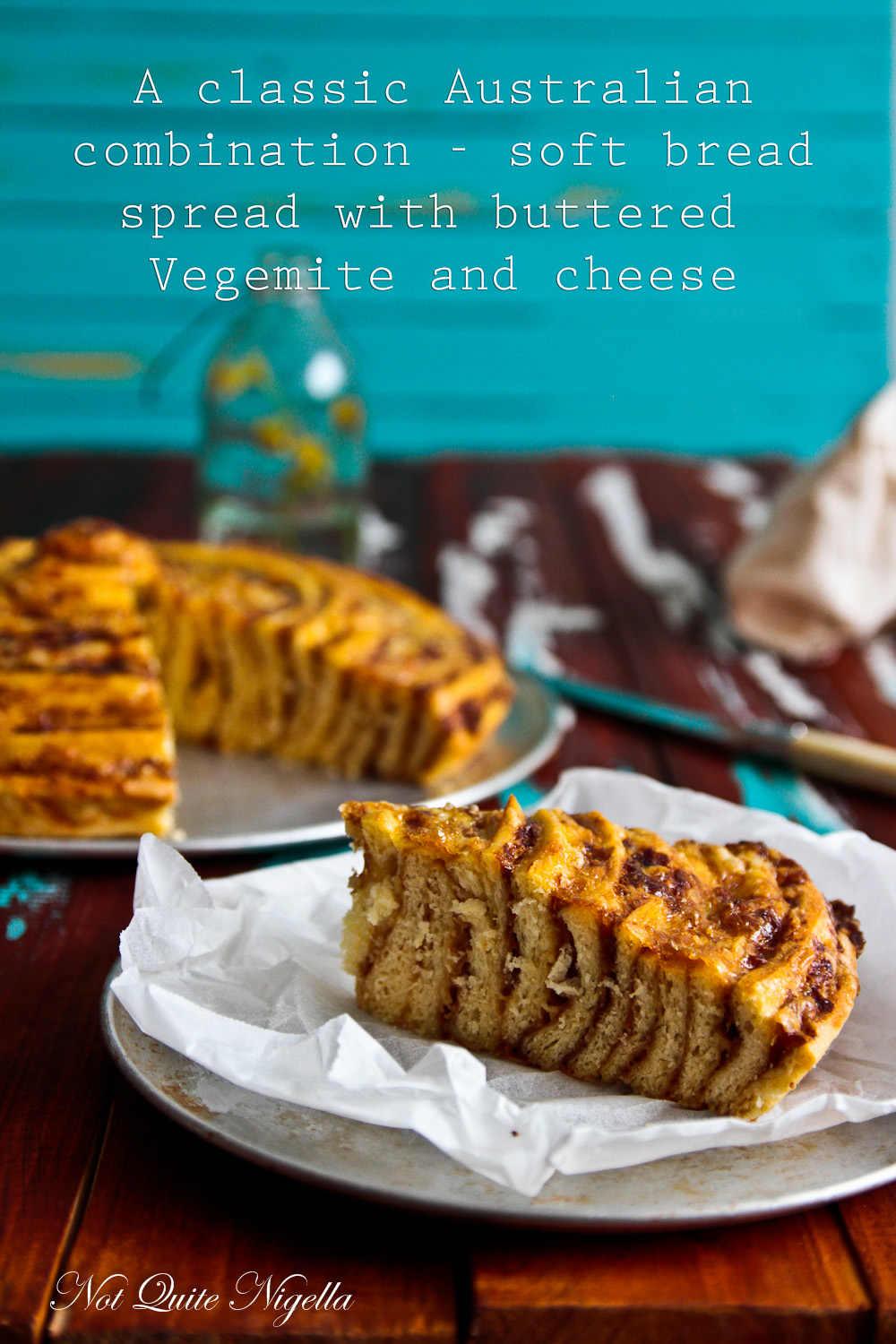 I ended up describing Vegemite as a salty, yeasty spread which admittedly isn't the best sell. I don't mind the stuff but if I go for a spread, it's usually peanut butter. Vegemite is however always in our pantry because Mr NQN likes it and because I like cooking with it. Much like coffee which I don't drink it that often love to cook with. Go figure.

Many countries have an item that is palatable to their own tastes but not necessarily to others. For Japan it's nattō, for us it's Vegemite, for the south of America it's perhaps grits. These all generally don't translate to those outside the culture. I once saw a television host give actor Rob Lowe some Vegemite to try and the poor soul spread it as thick as peanut butter. The clue for him, which alas he did not heed, was the audience tittering with laughter as he spread it thick and dark. Vegemite is really best spread with lots of butter. 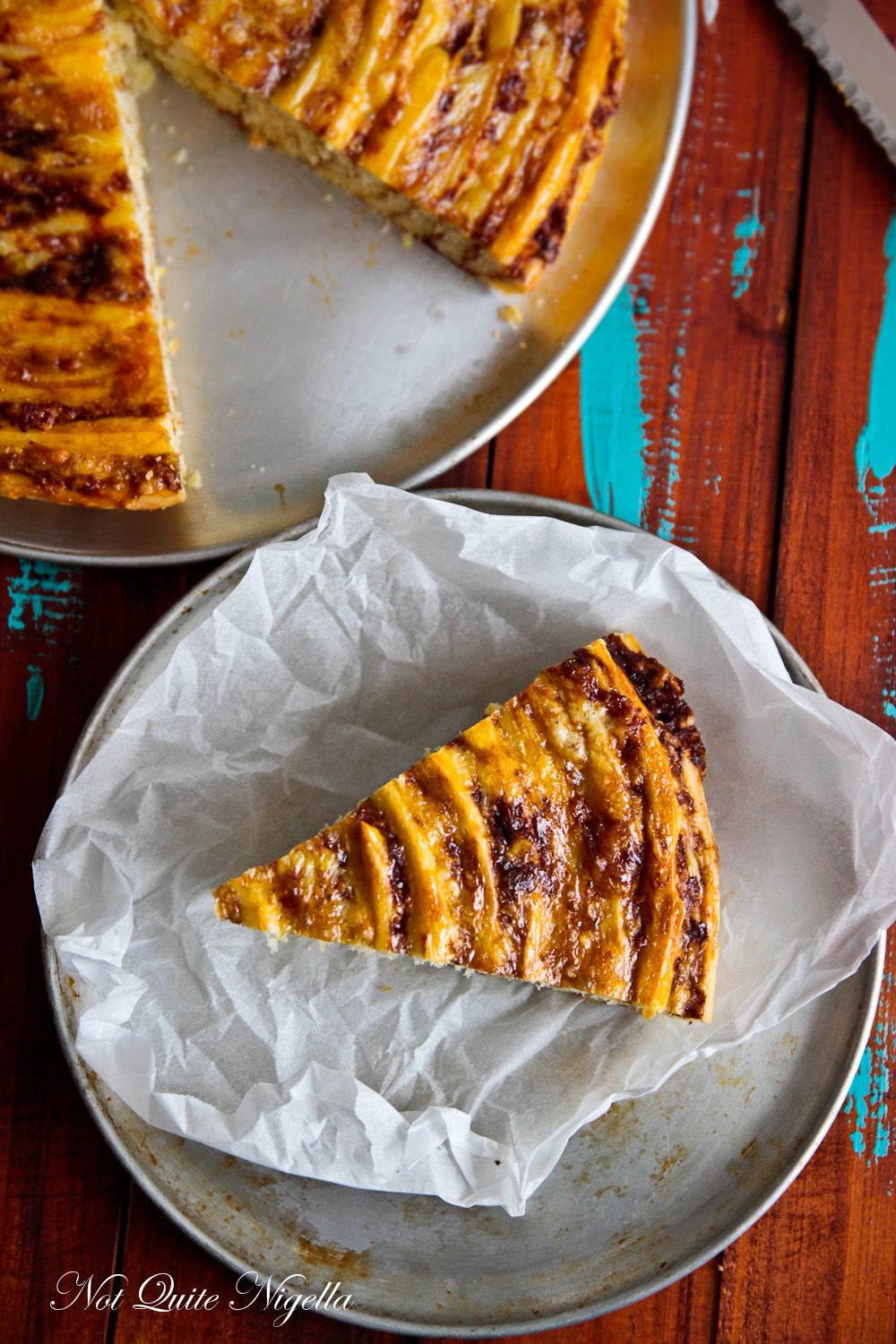 Because I'm obsessed with either tiny or gigantic things, I decided this Australia Day I would try and make a giant cheese and Vegemite scroll. It would be ideal for when you don't know exactly how many people you will be feeding. There are plenty of recipes out there for cheese and Vegemite scrolls but most use self raising flour while I wanted to use yeast as I wanted it more bready than cakey. I also wasn't as taken with the idea of straight Vegemite and cheese and wanted to use Vegemite in the same way that I would eat it - with lashings of butter. 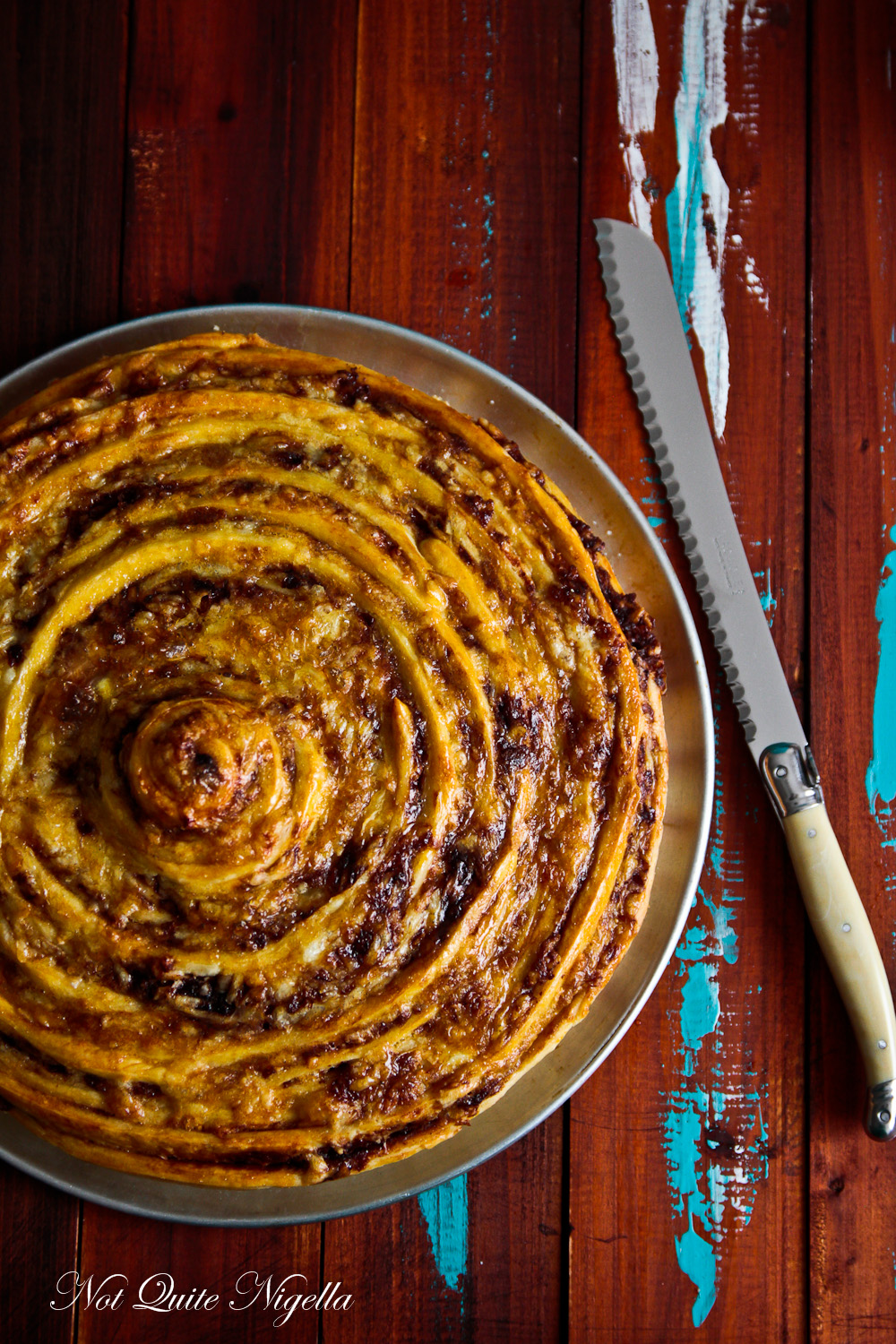 I wasn't sure if it would work the first time but I was deliriously happy that it did. The scroll held its shape once held in by the tin and the enormous bread was just under 30cms/12 inches in diameter. The texture was pillowy soft and I also loved the serendipitous striking pattern of the layers once I cut into it. In terms of taste, it was just the right balance of Vegemite, butter and cheese and I kept cutting off slices of for myself.

Luckily, it's monster sized or Australia Day party sized! Because you just don't know how many people you might feed or might take seconds or thirds ;)

So tell me Dear Reader, do you like Vegemite? And have you ever cooked with it? And given the choice between Vegemite, peanut butter, jam or Nutella, what do you most often reach for? 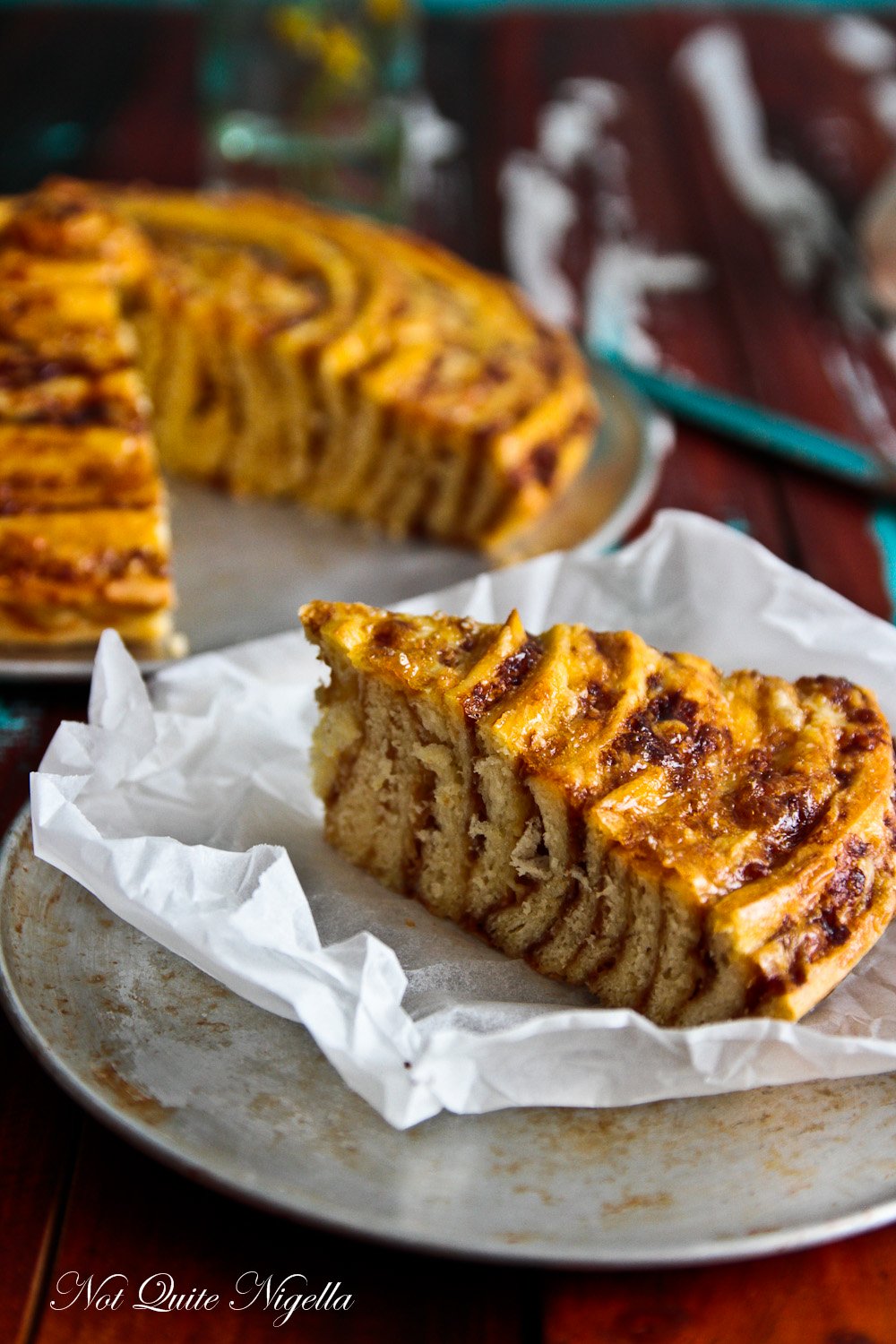 Tip: I keep my yeast in the freezer as I can never get through the canister before the best before date. 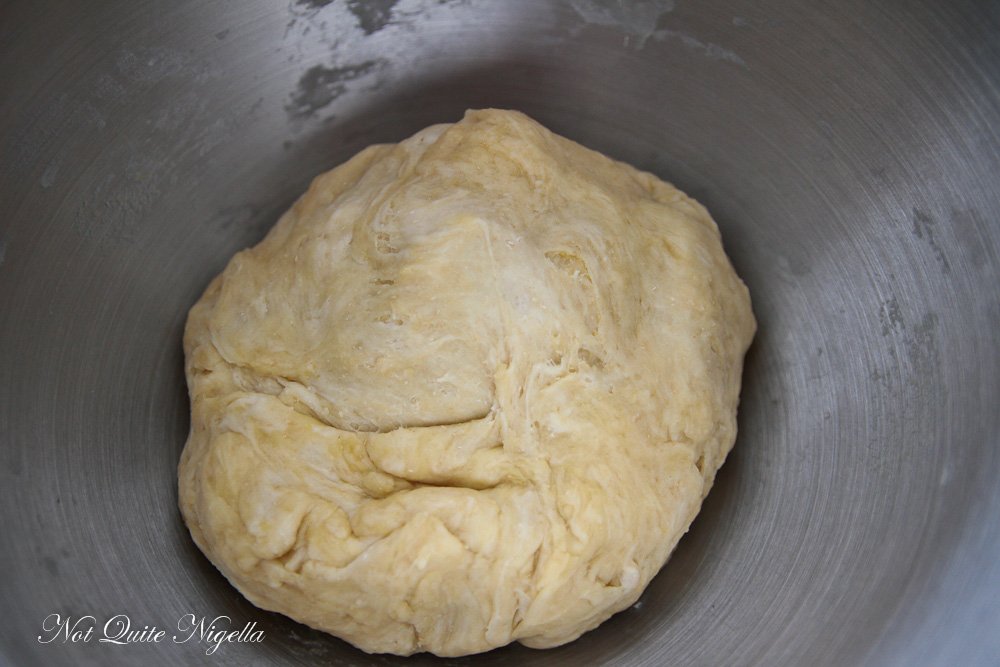 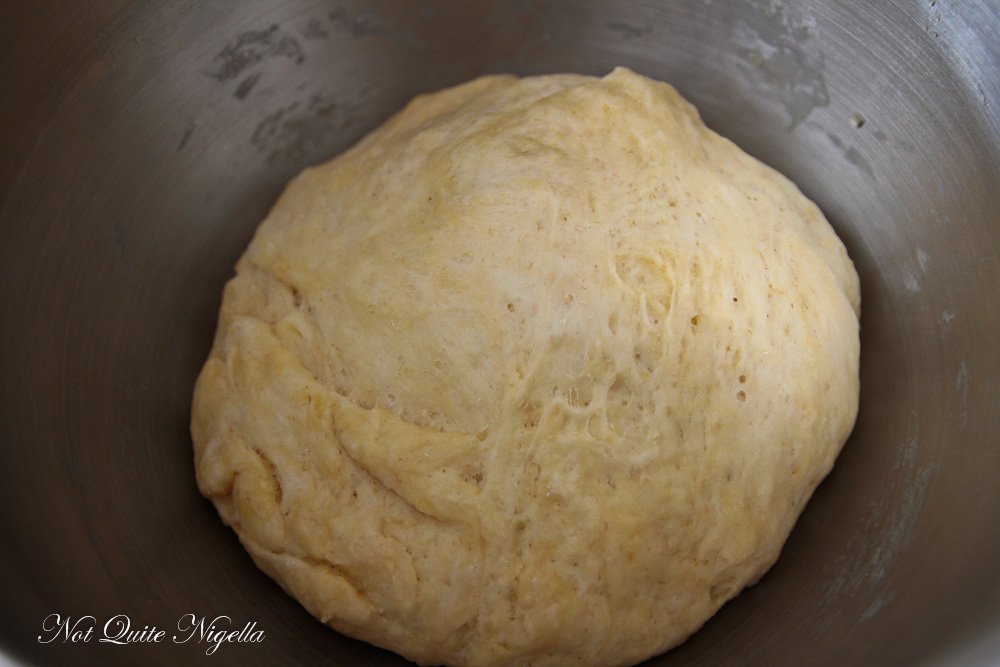 Step 2 - Shape the dough into a ball and place back into the bowl. Cover with cling film and leave in a warm, draught free area of the kitchen. Allow to rise for 30 minutes. Meanwhile mix the Vegemite and additional butter together, weigh the cheese out and spray a 24cm/9.6inch pie tin with oil spray. 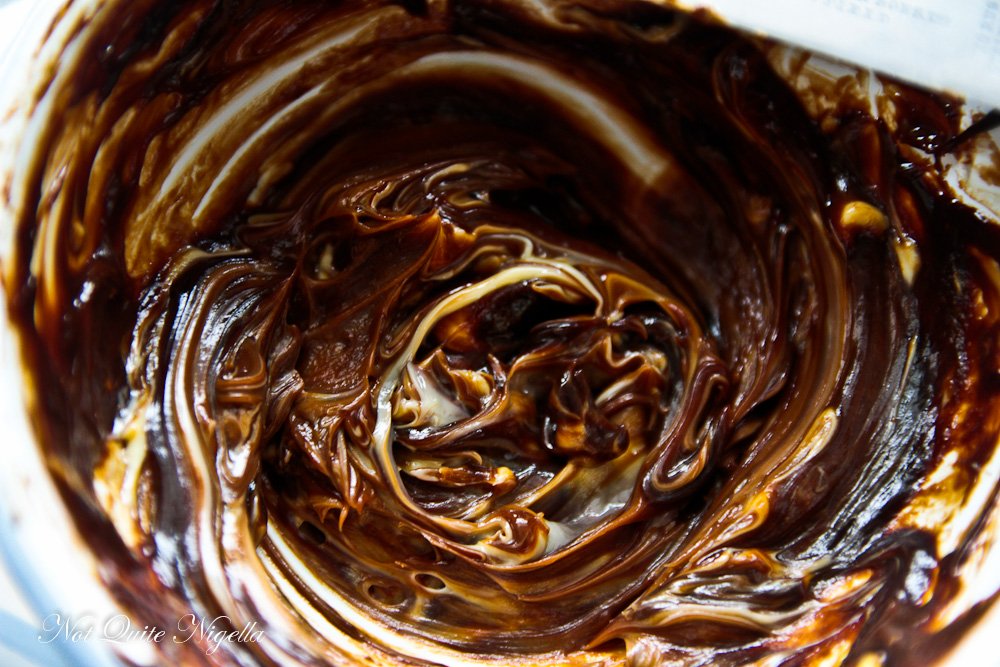 Step 3 - Punch down the dough and then knead in the salt for about 1 minute. Roll out to a long rectangle as thin as the dough will allow. Mine was about 50cmsx30cms. Spread with the Vegemite and butter mix and then top with the grated cheese. 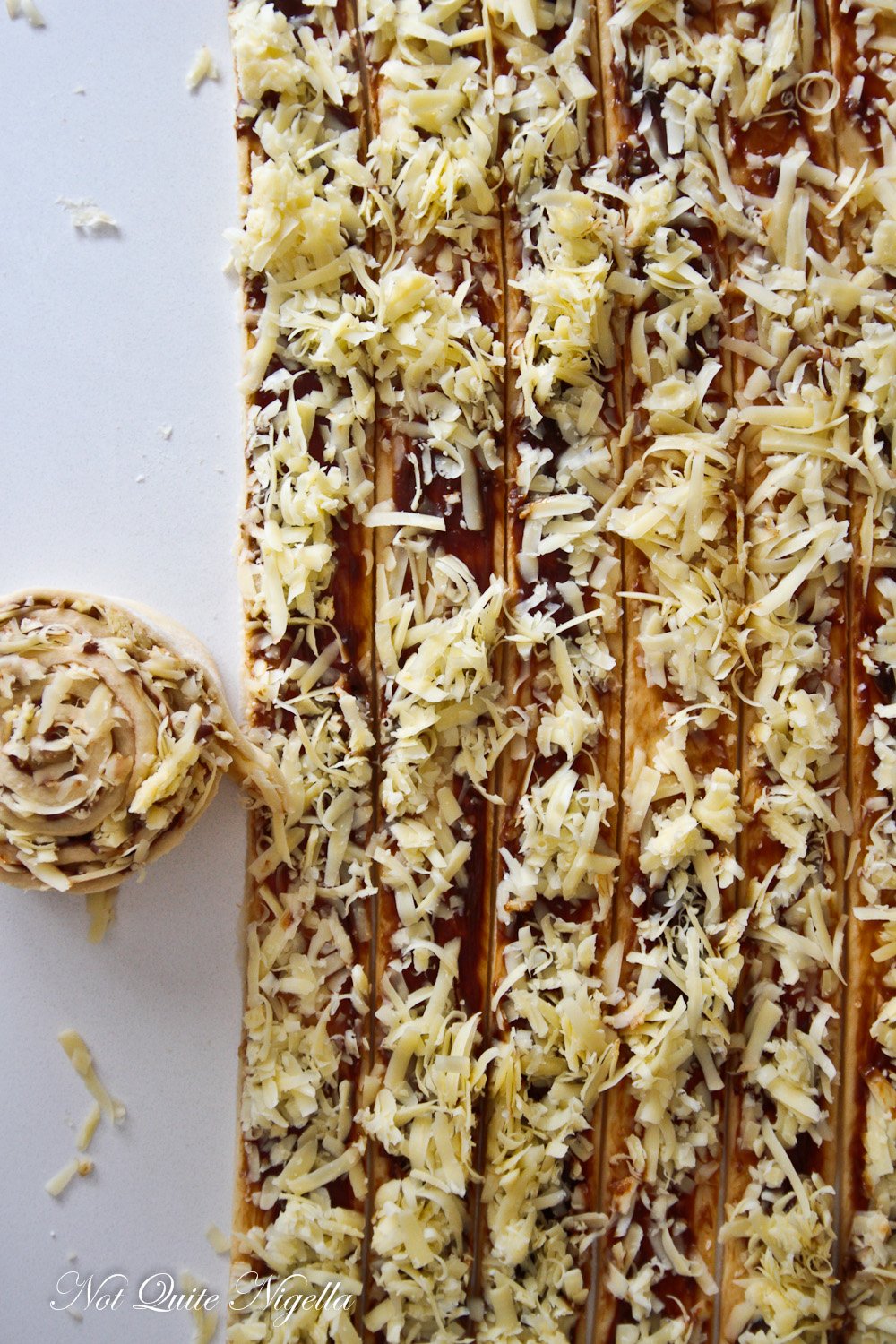 The dough sliced into one inch pieces

Step 4 - Using a knife slice the dough once inch apart into strips. Roll the first piece up into a scroll and then join it to the next strip and continue rolling it up against the other strips continuing on where the last piece of dough left off until you've used up all the dough. 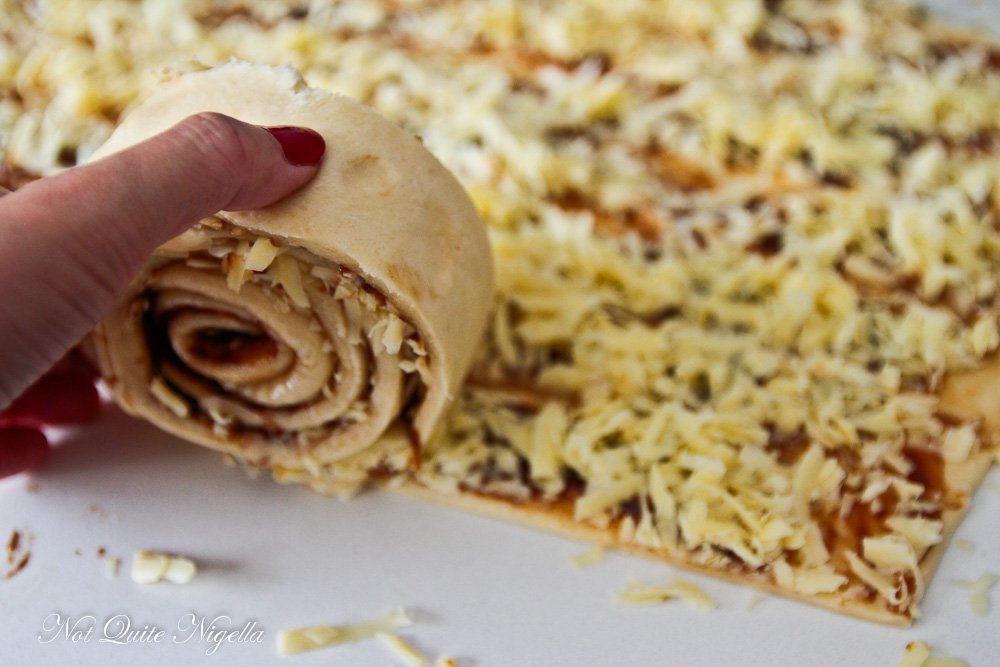 Rolling to make a gigantic scroll

It's fairly easy until you get to the last quarter of dough - in that case I press the cheese against the dough and lift up the strips and pat them against the large coil of dough. Place on the greased tin and allow to rise in a warm place for 60 minutes. 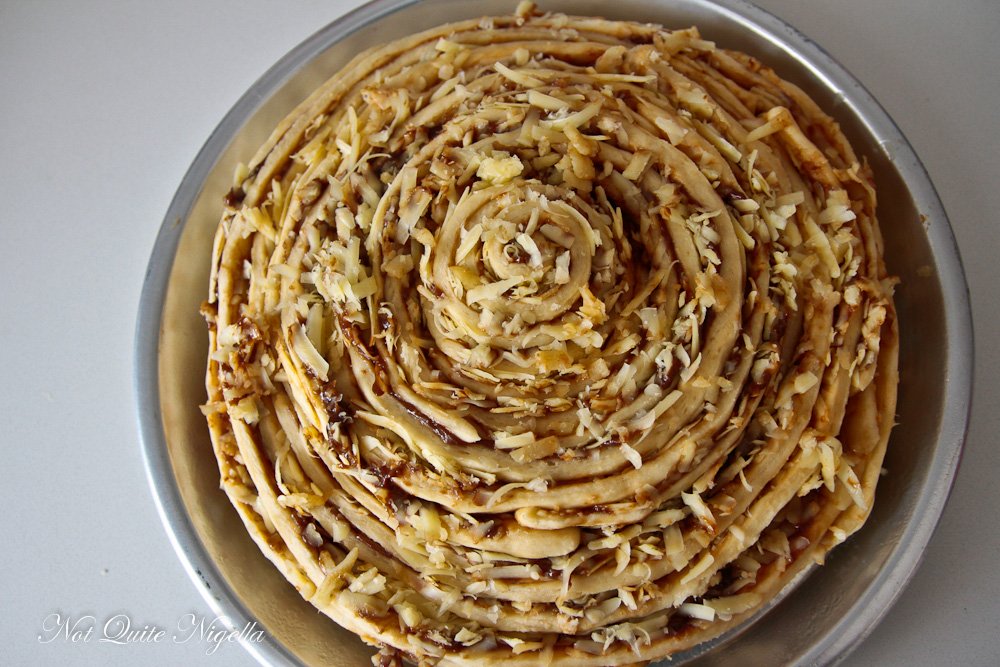 Step 5 - Preheat oven to 180C/350F. Whisk the egg yolk and add a teaspoon of water if it is too thick. Brush the top of the risen scroll with the egg wash and then bake in the oven for 20 minutes. If it is getting too brown, cover with foil sprayed with oil so that it doesn't stick to the scroll. You don't want it burning or getting too brown as the cheese gets dry and crunchy. Bake for another 10 minutes and then remove from oven. Serve warm. 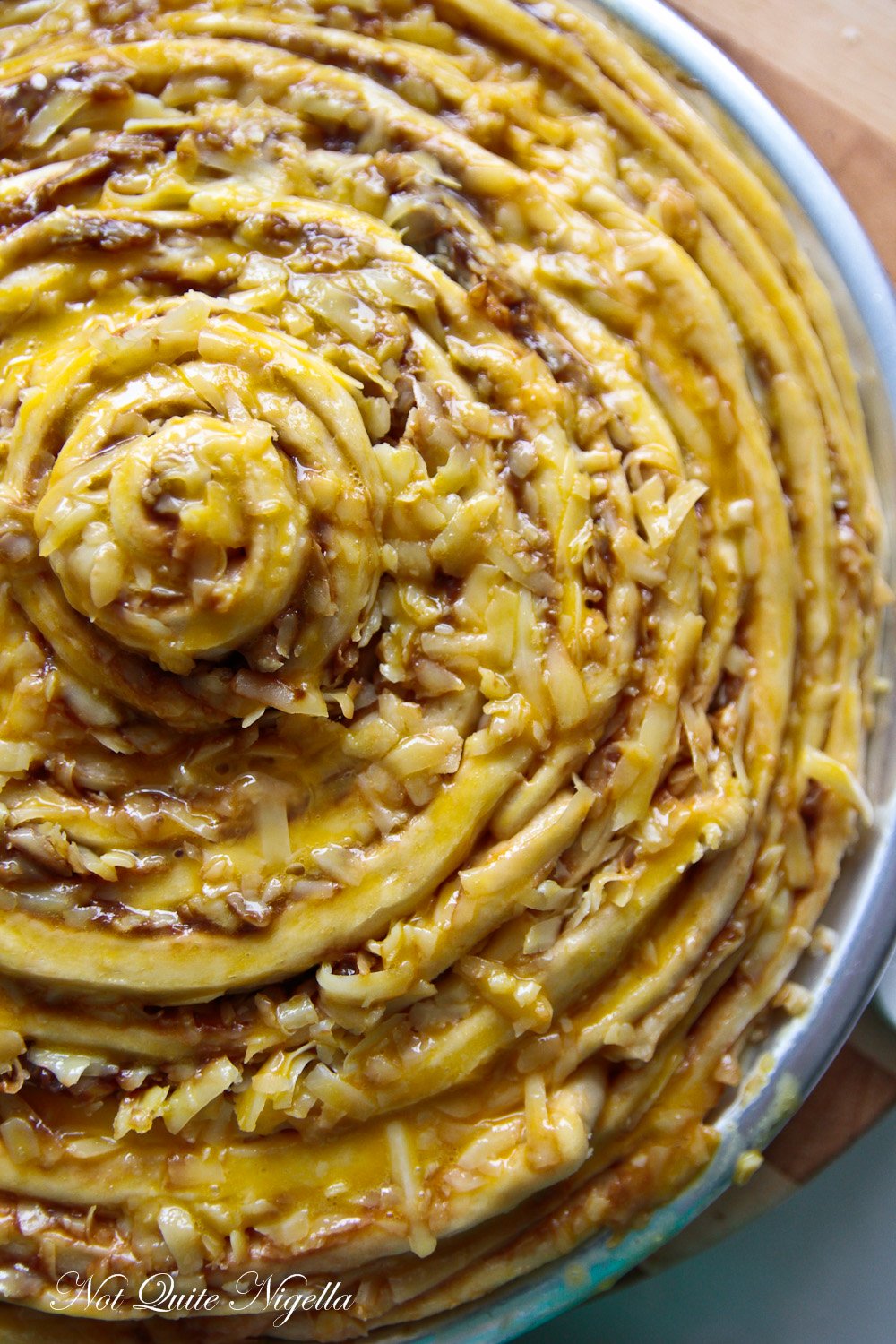