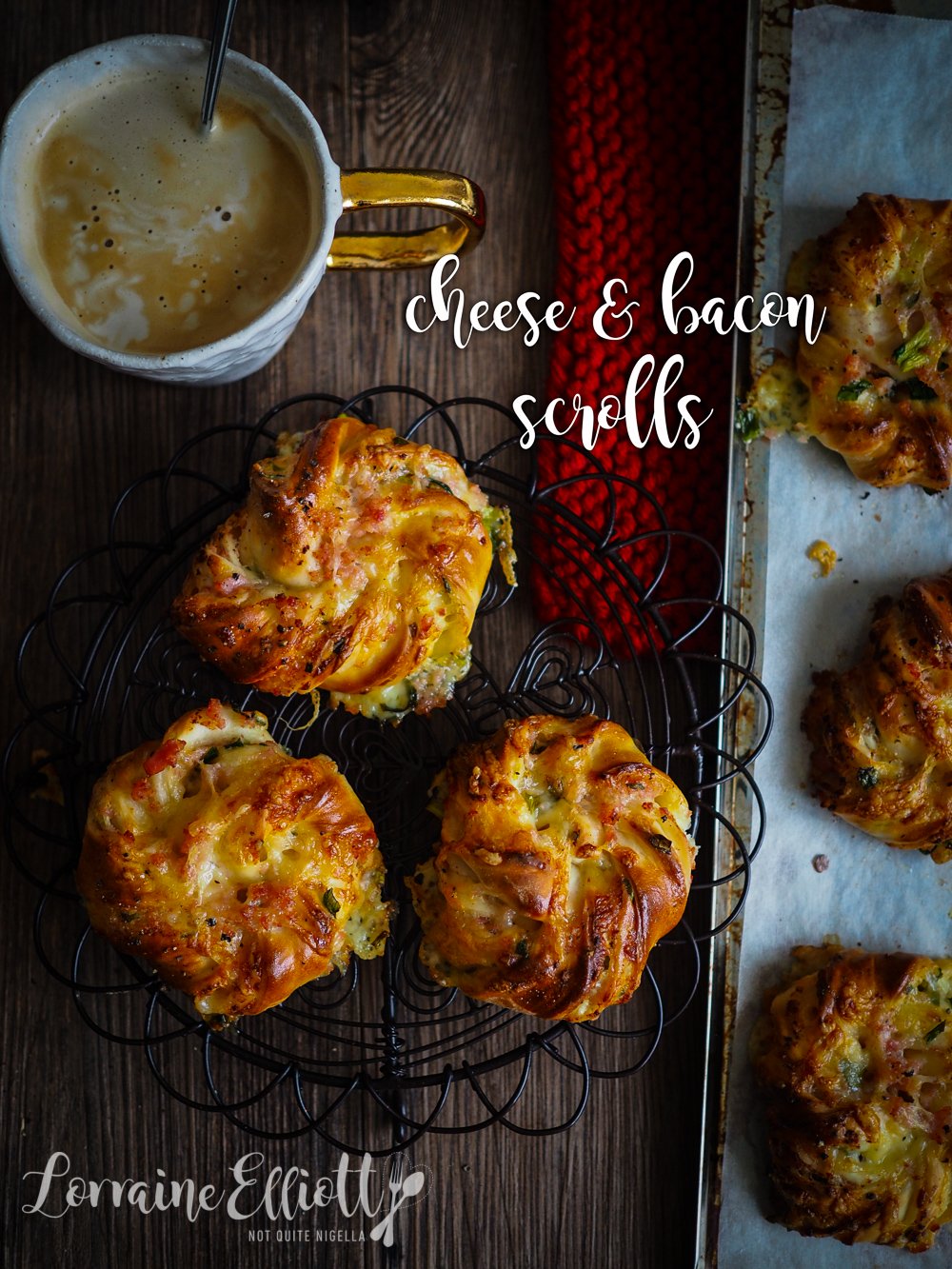 Crispy on the bottom, soft and fluffy on the inside with plenty of bacon, cheese and spring onion filling these rolls are utterly unstoppable! I had to pry myself away from these when I made them! Yes this is very much a pushy recipe Dear Reader!

These cheese and bacon scrolls were inspired by those supermarket cheese and bacon rolls. They're a weakness of mine and whenever we go grocery shopping I always stare longingly at them. I used to eat the cheese and bacon topping off separately and then butter the bread part and eat it warm with plenty of butter soaking in (#thisiswhyyouexercise lol). 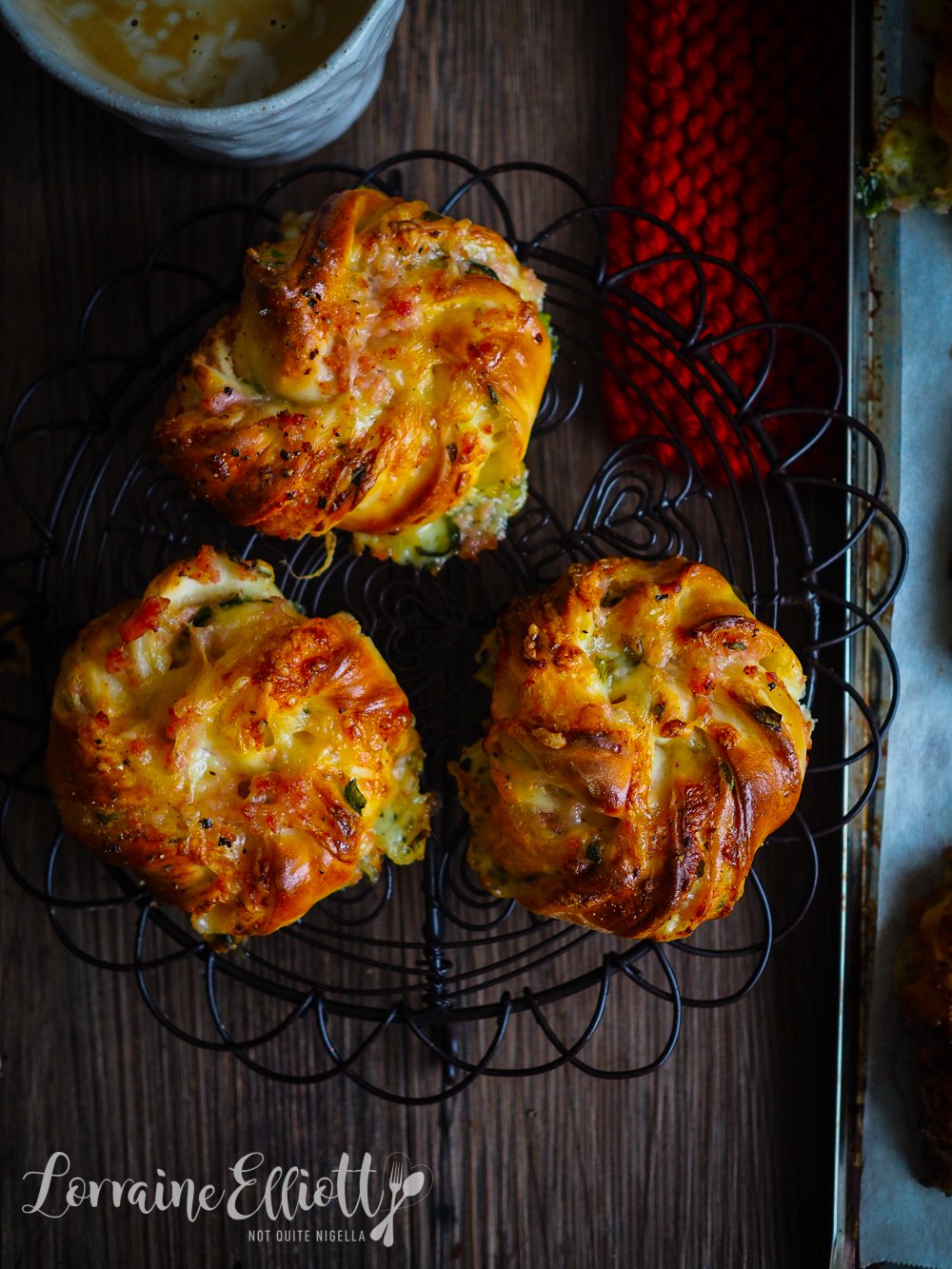 This winter I wanted to make a home made version with a more even distribution of the filling though, rather than just on the top. I decided to model the appearance of these on the Swedish kanelbullar or cinnamon scrolls. When they appeared on my Instagram stories I got an unprecedented amount of messages asking me when the recipe was going up so I rushed these up!

They were so good that I messaged Mr NQN straight away wanting to share with him the news of the hot scrolls and told him to hurry home from work because they were hot out of the oven. This week he has been working afternoons from home for a very good reason. 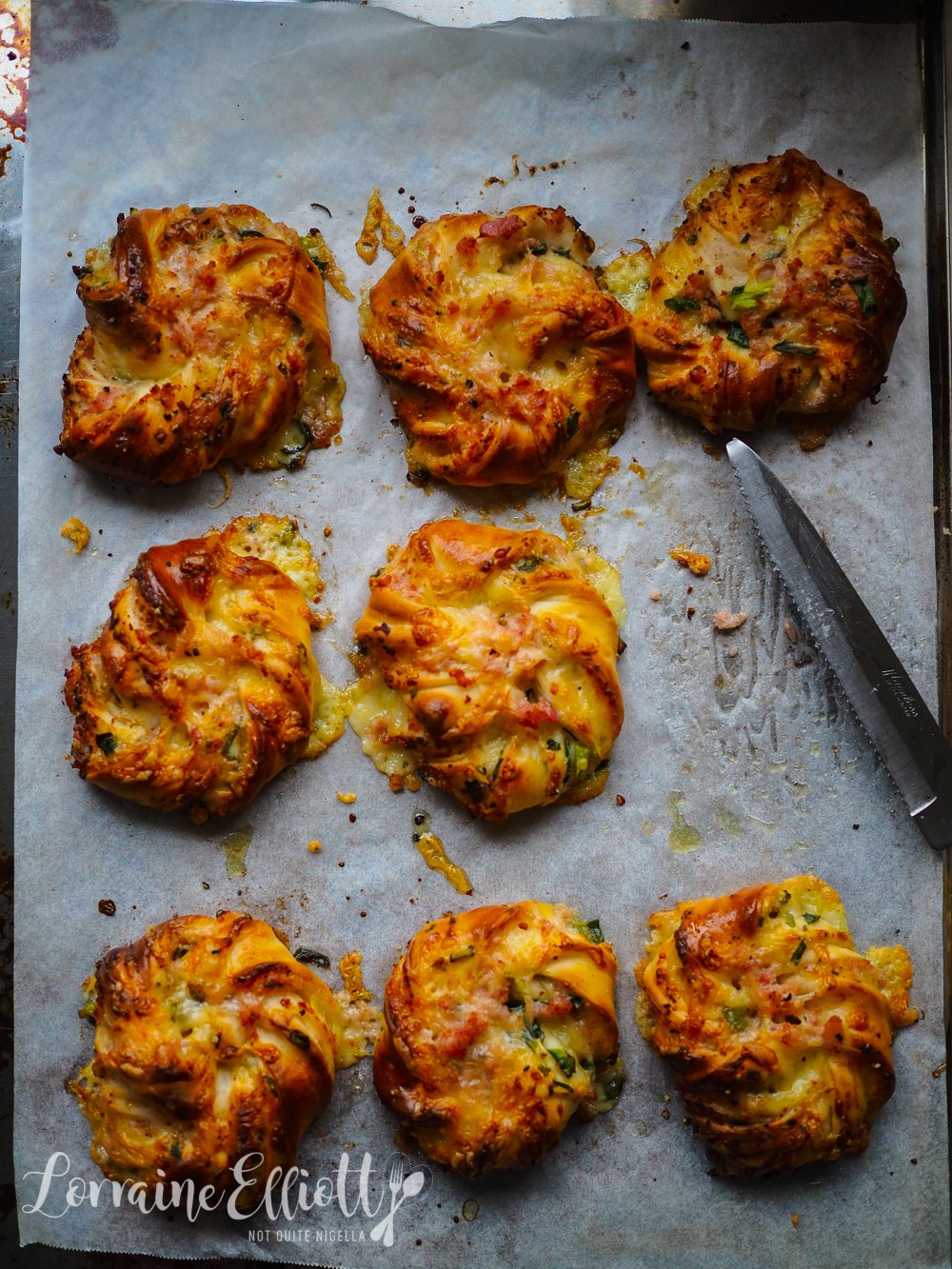 I have some rather happy news to share with you Dear Reader. A couple of weeks ago I wrote about meeting a couple of dogs to potentially adopt them but we were both allergic to one of them. Life is so funny and wonderful because on that very day I received a phone call. It was from a lovely woman at a rescue group on the Central Coast telling us that our application to adopt a 15 week old puppy called Teddy was accepted! 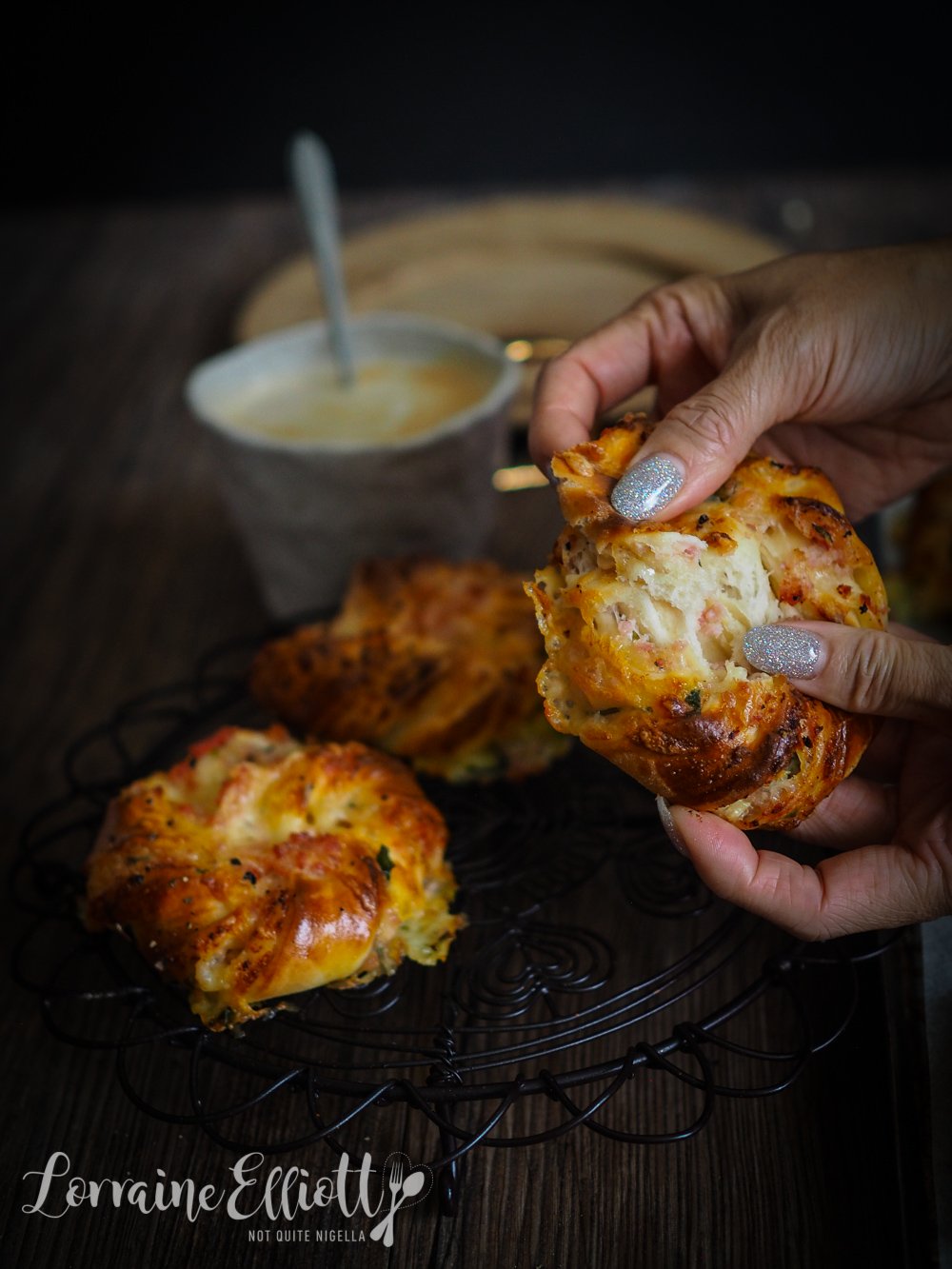 We didn't expect to be picked for Teddy. We had been rejected or ignored by so many times by rescue places that we had sort of given up. That weekend we drove up to meet Teddy, what they believe to be a spoodle or cockapoo (cocker spaniel poodle). He was very shy but sweet. We took him home and he settled in quickly. Even in the ride on the way home he slept in a bed in my lap the whole way, never shaking or drooling (the latter is what he does when he is stressed). 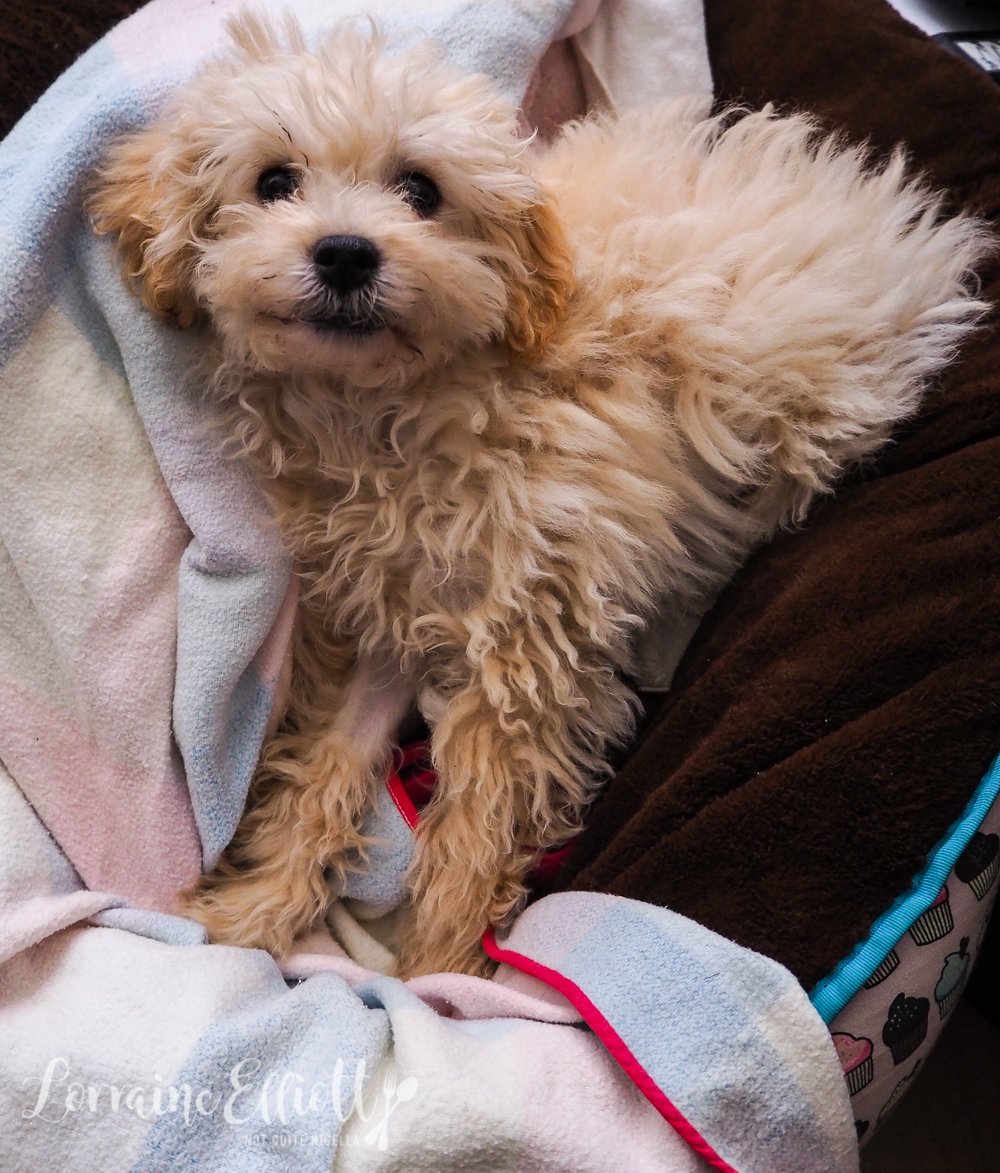 It's a rather different venture adopting a puppy vs a senior rescue and Mr NQN promised to toilet train him well. As a puppy parent Mr NQN is anxious, fretting over the amount Teddy eats or what he is thinking or doing (I can't believe I'm the more chilled parent). As Mochi was really my dog, or she thought so, I think Mr NQN is hoping Teddy will be more his so I've been giving him lots of bonding time with Teddy. Mr NQN has also set up an Instagram account for him @iamaspoodle which you can follow to keep up with Teddy antics. 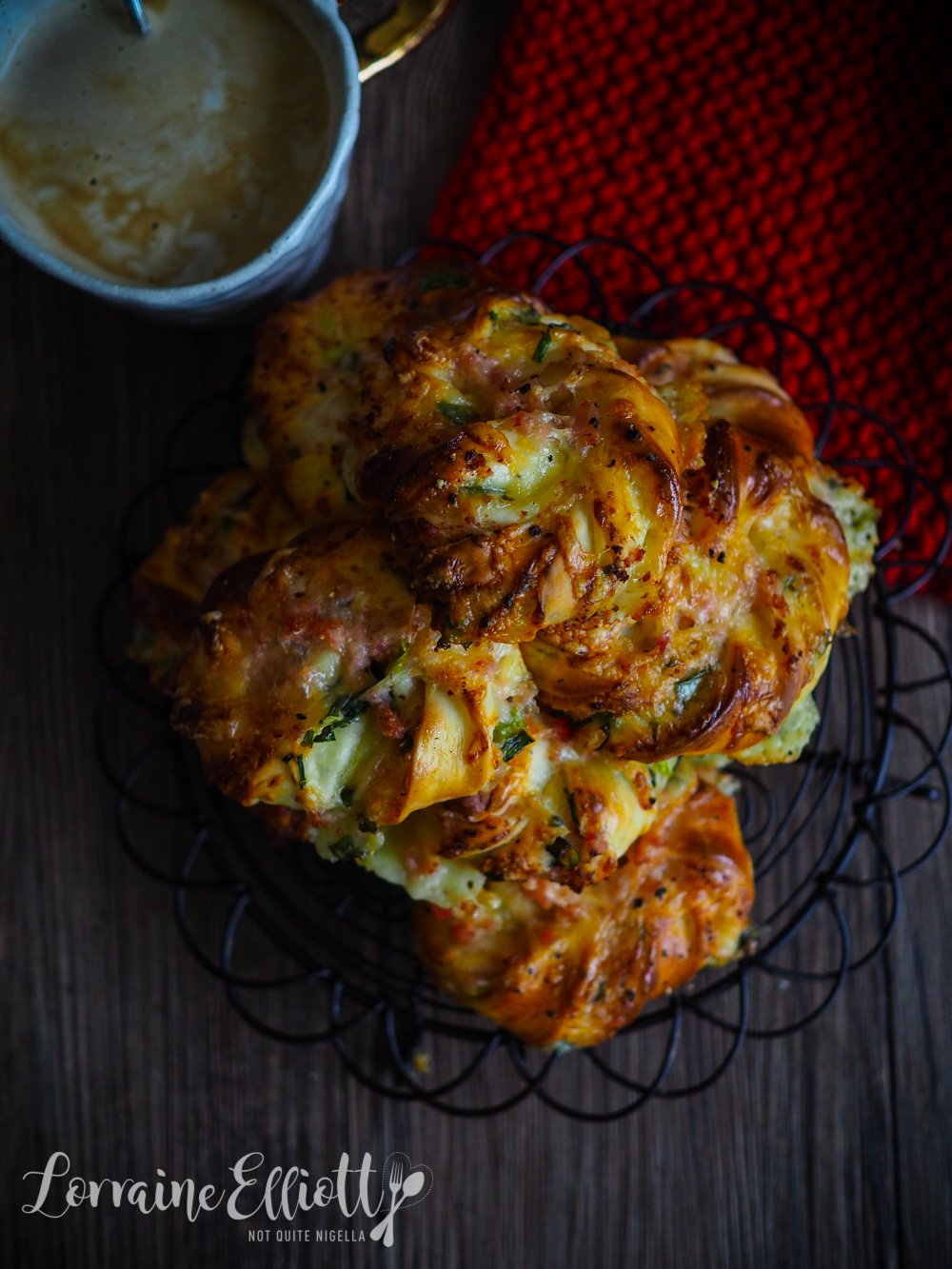 Slowly, Teddy is coming out of his shell. He seems to really like listening to classic music and seems fascinated when I sing. He also seems to have a predilection for laundry baskets and he loves stealing laundry, socks and fuzzy winter boots and shredding tissues and paper. Despite his dozen or so toys nothing seems to taste better than the remote control, book or handle of a box. He also wants a taste of everything possible, whether it be my kombucha or these cheese and bacon scrolls! ;)

So tell me Dear Reader, do you like those cheese and bacon scrolls? Do you have any puppy tips? 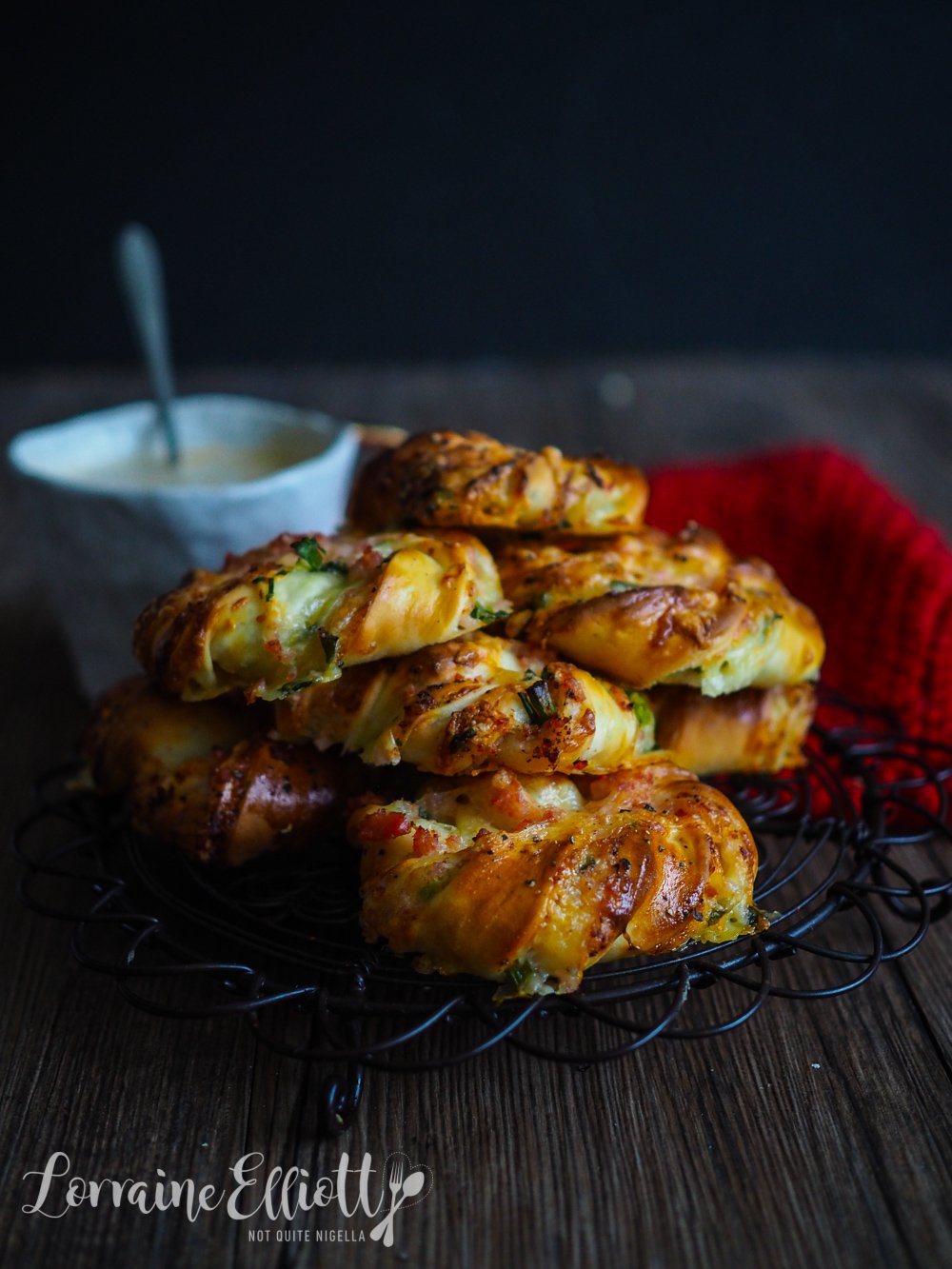 Step 1 - Make a roux by whisking the 15g of flour and 65ml milk together until smooth. Heat on medium heat and whisk while it thickens to a roux and reaches 65C/149F. Whisk in the butter until smooth and cool until the mix is lukewarm.

Step 2 - In the bowl of an electric mixer mix the remaining flour, milk, sugar and yeast with a spatula until combined. Add in the roux and mix again and then use a dough hook and knead until you get the window pane effect where you can pull apart the dough with your finger and it doesn't break and you can see through it. 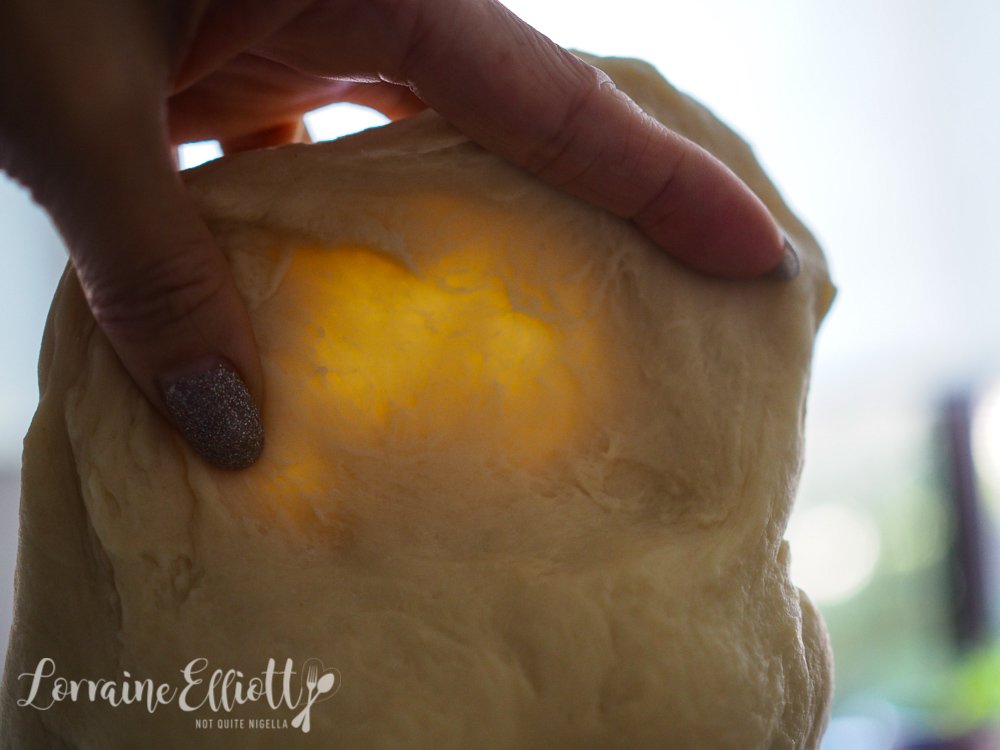 Start of the window pane effect

Step 3 - Shape into a ball and cover with a lid (I use a metal pizza plate) and put in a warm place. I place it in a bowl of hot water changing the water when it gets cold. Allow to rise until double or triple the size (around 1 hour). Punch down and knead in the salt. 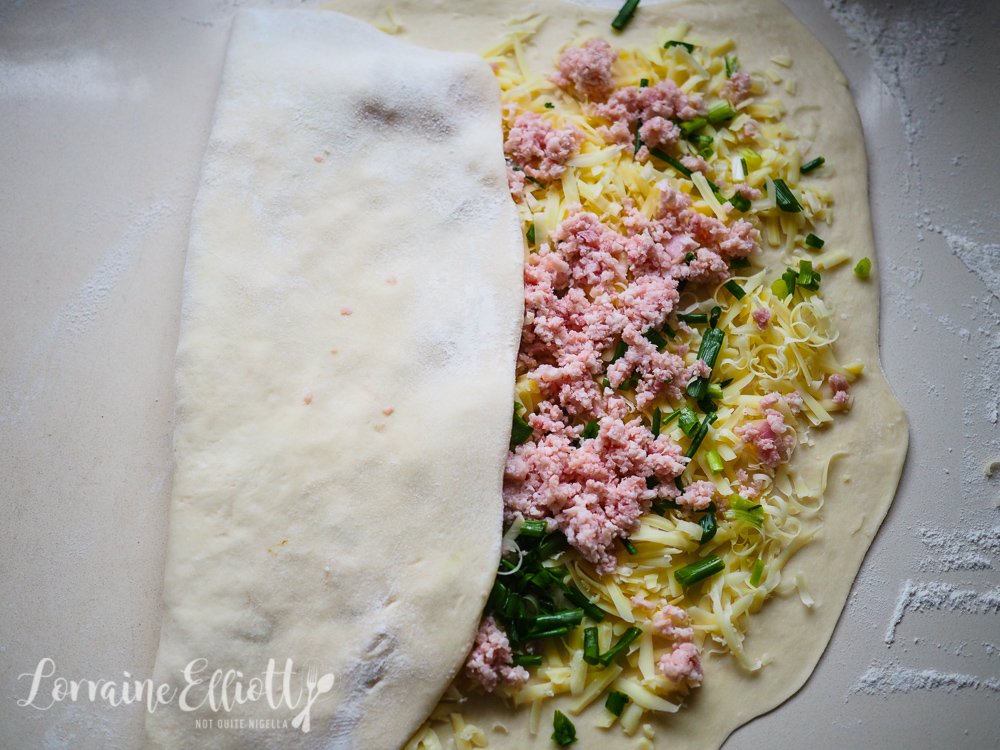 Folding into a business letter

Step 4 - Preheat oven to 205C/400F and line a tray with baking paper. Lightly flour a large surface and roll out the dough to around 35x35cms/14x14inches. Cover with bacon, cheese and spring onions and then fold in three like a business letter. 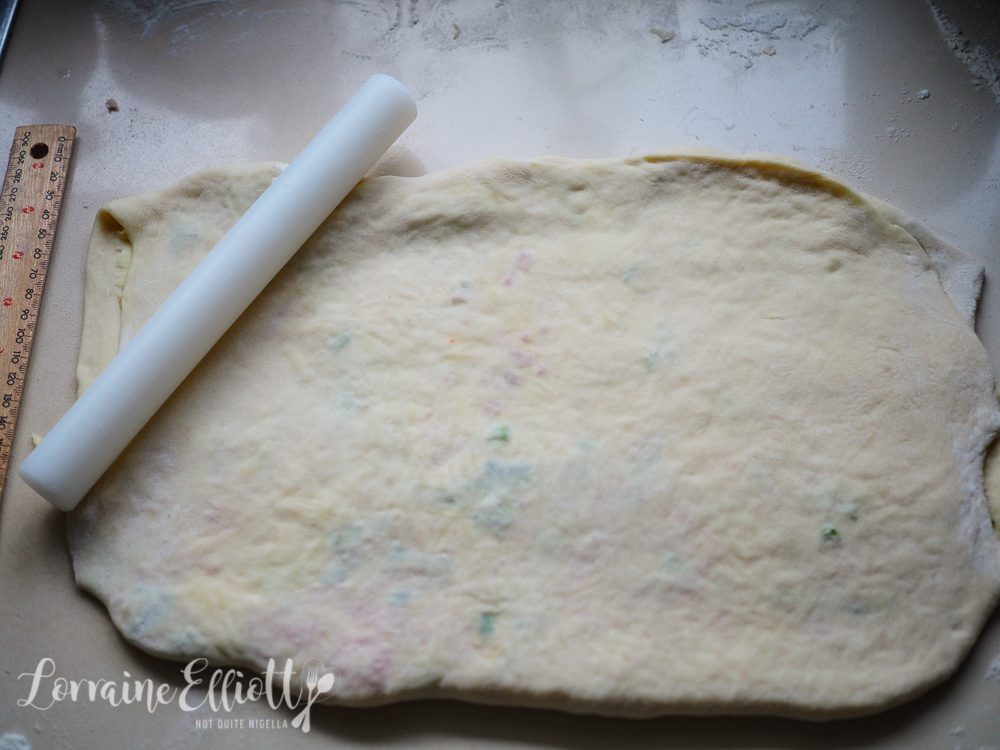 Rolling out the filled dough 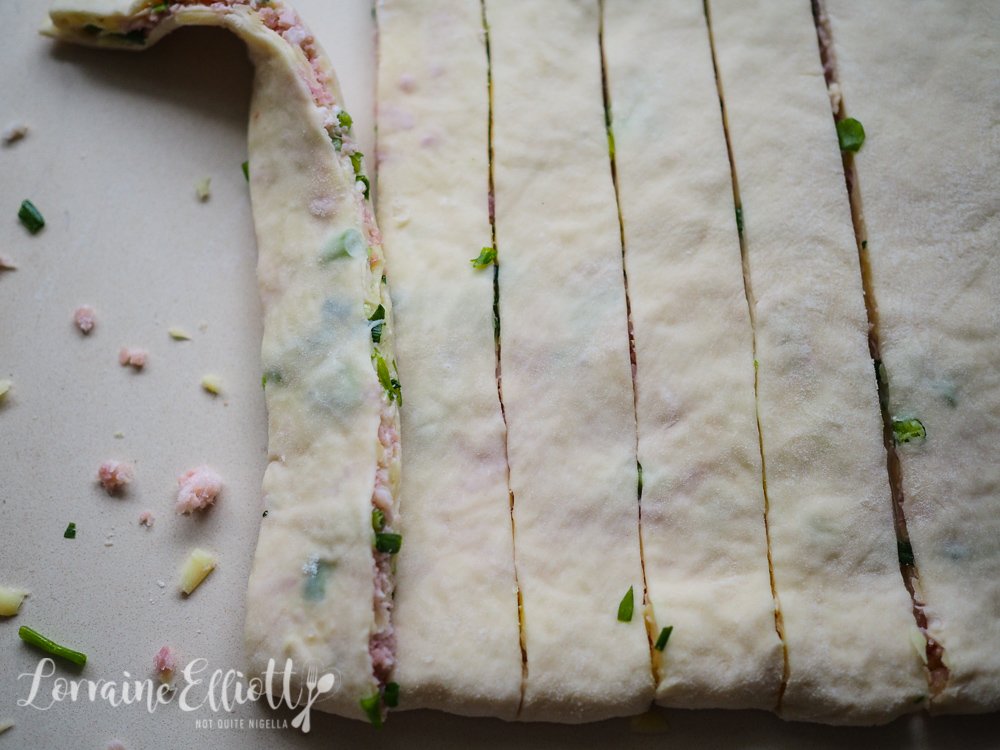 Step 5 - Roll out again careful not to break the dough until it measures around 30cms/12inches in height and around 16cms/6.4inches wide. Cut into 8 strips and then take each strips and twist. Tuck in the end underneath and then turn the scroll over. Don't worry about any bacon or cheese that falls out. 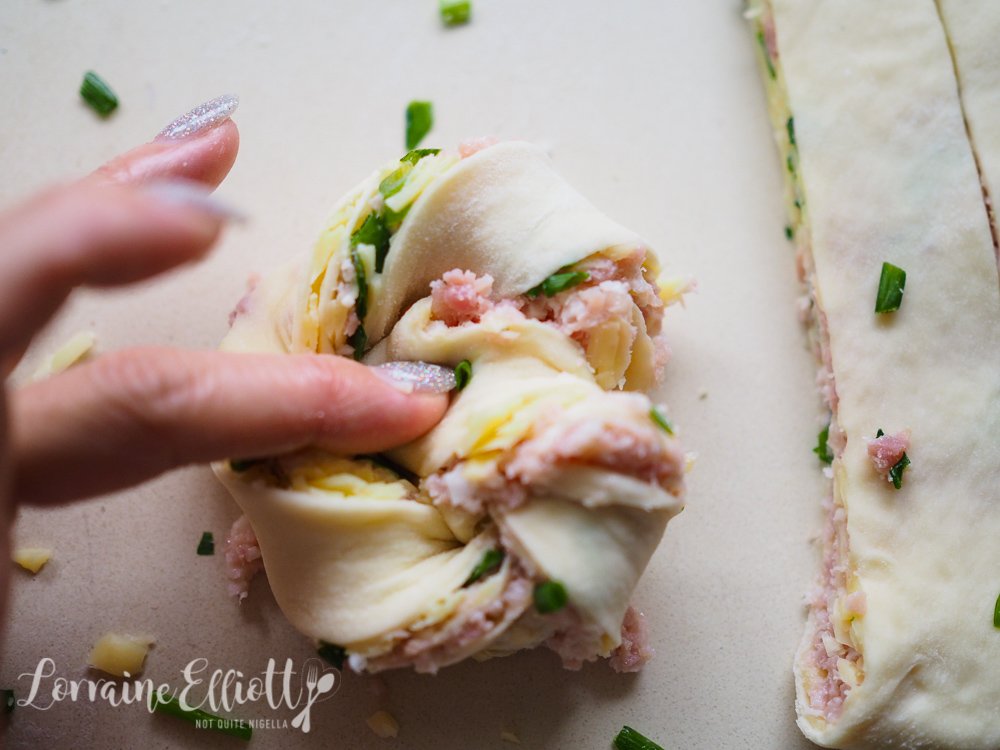 Step 6 - Repeat with the remainder of the strips and sprinkle any loose bits of bacon, cheese or onion on top of the scrolls. Brush with beaten egg. Allow to rise for 20 minutes, then bake for 15 minutes. Serve warm and with a warning that these are absolutely heavenly soon out of the oven! 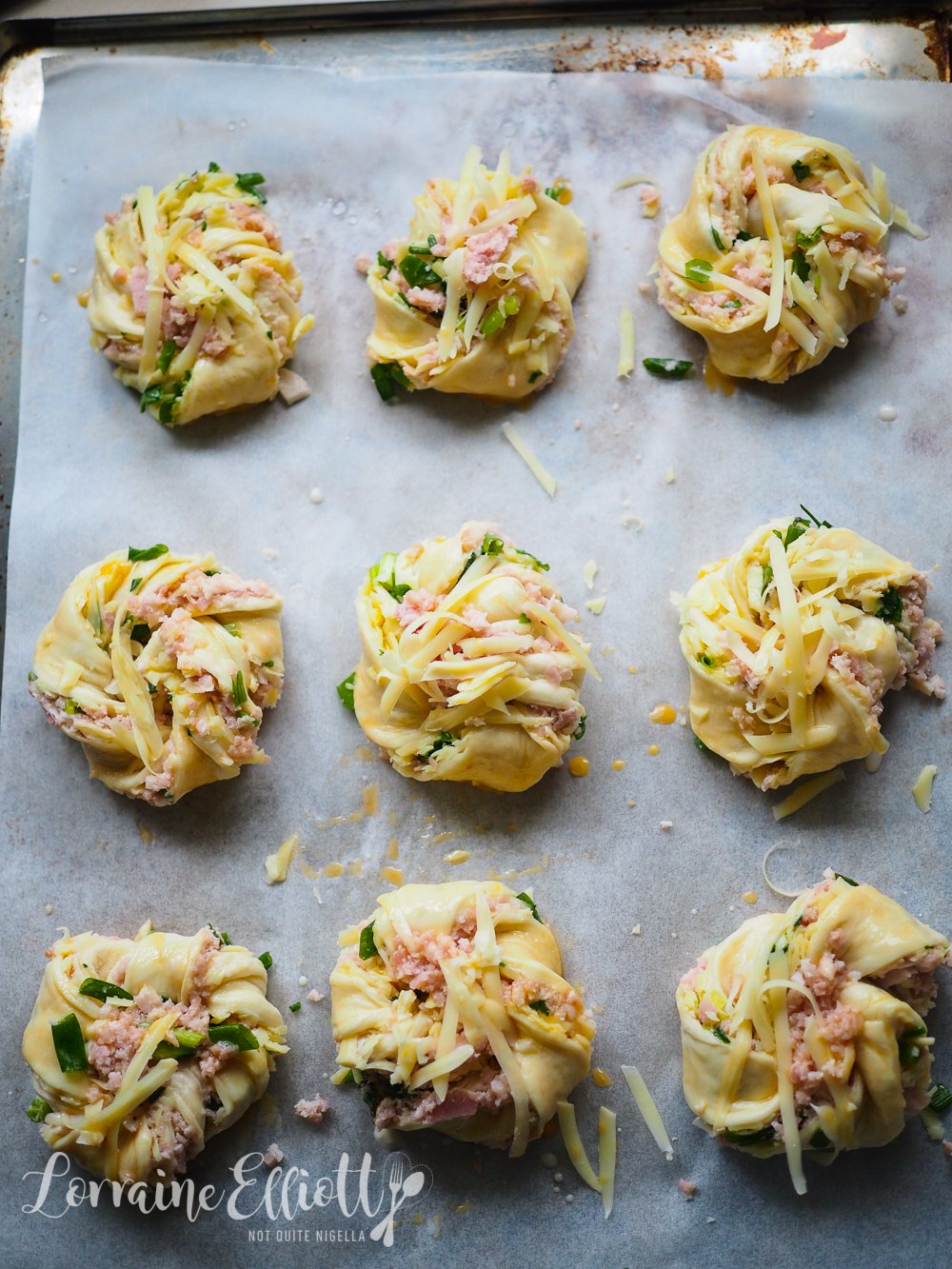 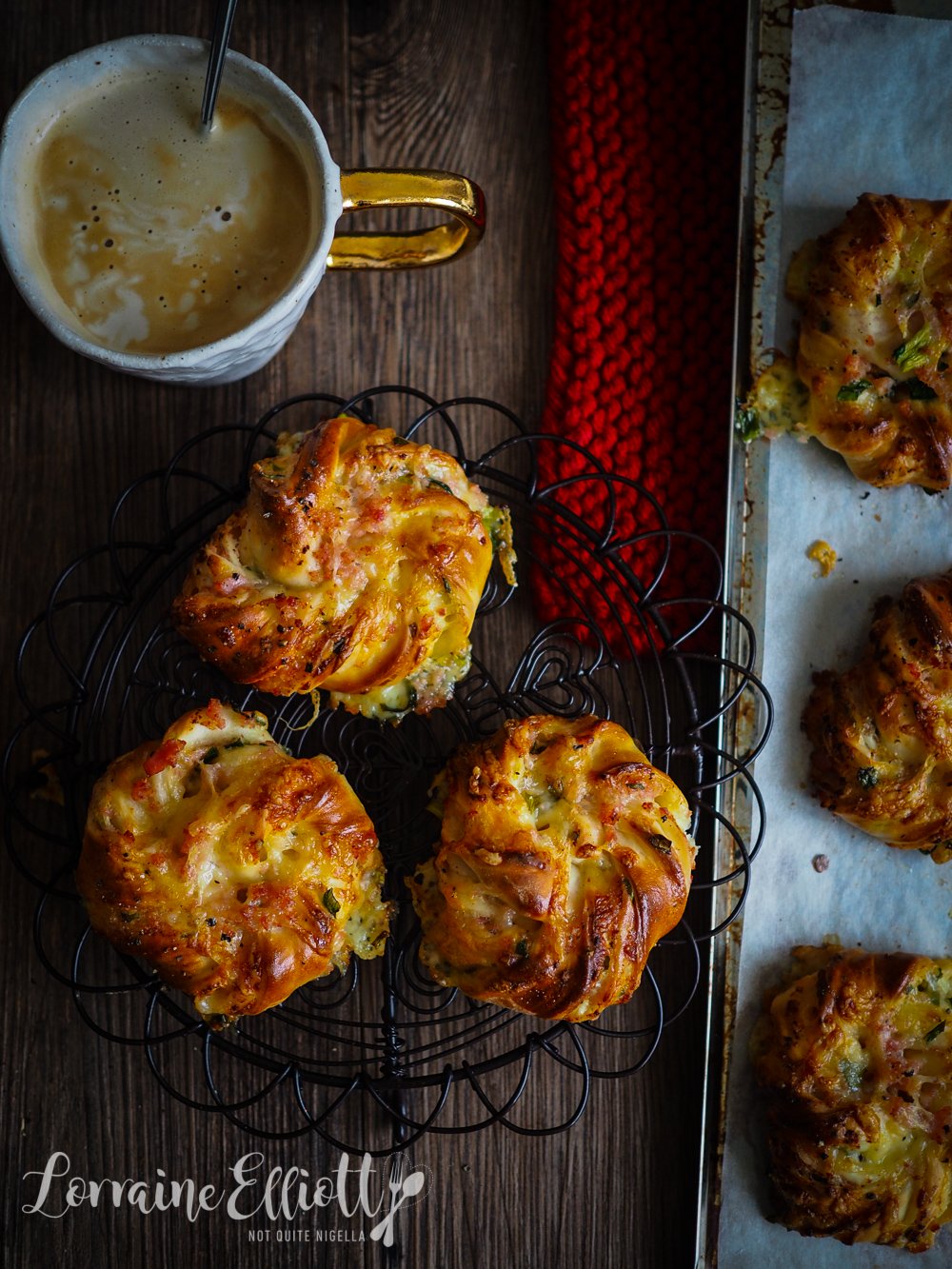