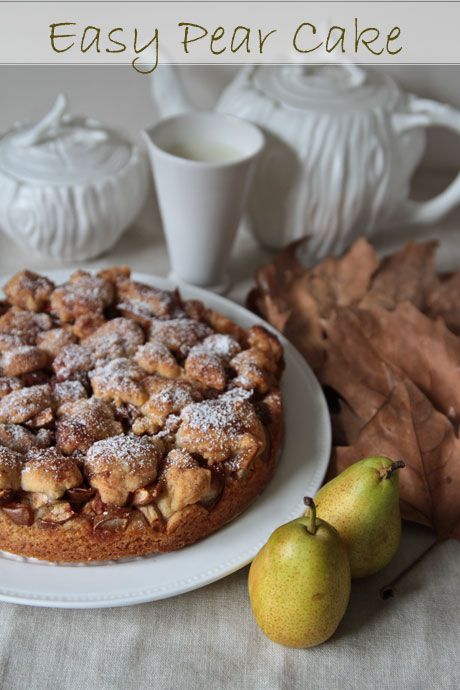 When I first started dating Mr NQN his mother Tuulikki lived in Coffs Harbour. She would ring him frequently worried that her eldest son was living far away from her in Sydney and seeing a girl she had not met. He was notorious for being a poor communicator with her and she was the kind of personality that couldn't quite understand that her son didn't want to be interrogated about his new girlfriend. So she kept prodding and talking and asking questions about me and he would offer up one word tight-lipped tidbits like "Yep" or "No" to her innumerable questions. I would listen and wonder how a person could talk to so much without taking breath once. 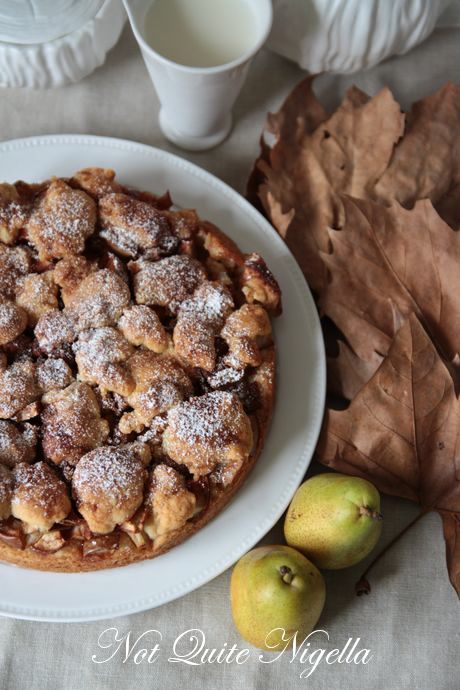 Her standard greeting when calling was "Hello? So anyway..." and out would tumble an entire week's worth of conversation and questions. This would prompt the very strong and silent Mr NQN to fasten his bottom lip to his top and keep quiet. I even witnessed a conversation where he put down the phone on the table, got himself a drink, drank it, flicked through some mail and picked it back up minutes later only to have her still talking having not missed a beat nor noticed.

As he was stonewalling her for information, she sought information out different ways. She wanted my star sign and time of birth so that she could construct an astrological chart for us so that she could see the potential for our relationship. She hounded him for days for this information and he finally capitulated with the correct date but the wrong time as we didn't know it. 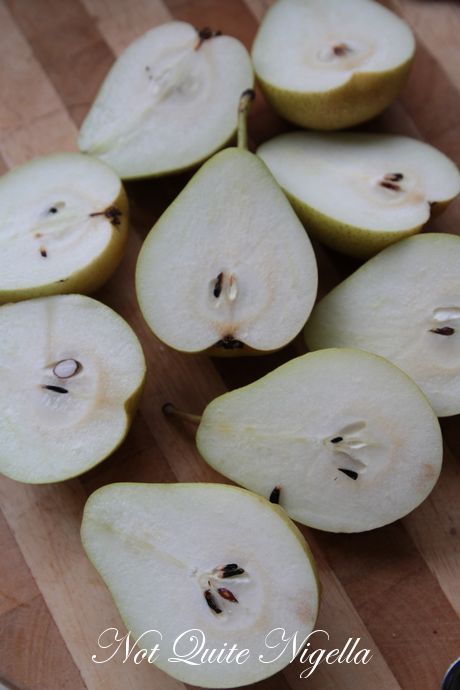 Shortly later she sent through a chart for both of us detailing out future together as told by the starsigns. And if anyone should ever dip their toe in the Elliott family no matter how casually or hesitatingly, you can be sure that she will ask for your birth date and time.  Cue Mr NQN and his brother who will then make jokes and snicker about "looking for Uranus" (boys!). Although I don't quite believe that you can have a horoscope that fits one twelfth of the population there is no denying that I do befit the characteristics of Taurus. 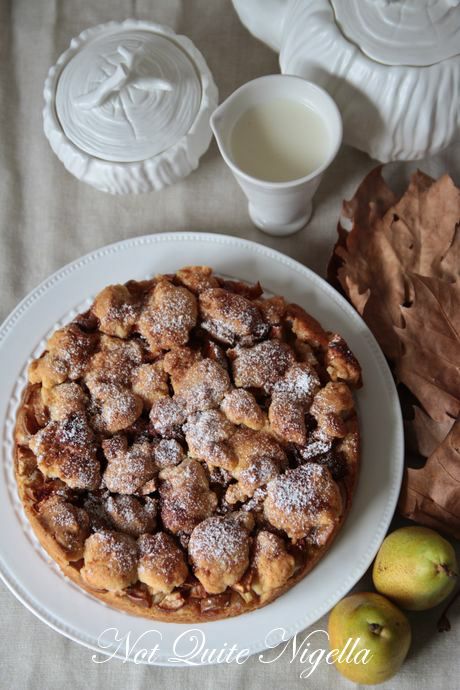 I recently went to see a psychic. Not for any soul searching reason but because my friend Queen Viv wanted to see one and I thought what harm could it do. He took my date of birth and told me a few things, all of which are typical Taurean but also typical me. He said with no uncertainty that as long as I had shelter, food, attention and love then I am happy. Of course this could be true of pretty much anyone. But I took his point. Don't take away my food, love or attention or a disgruntled beast emerges. 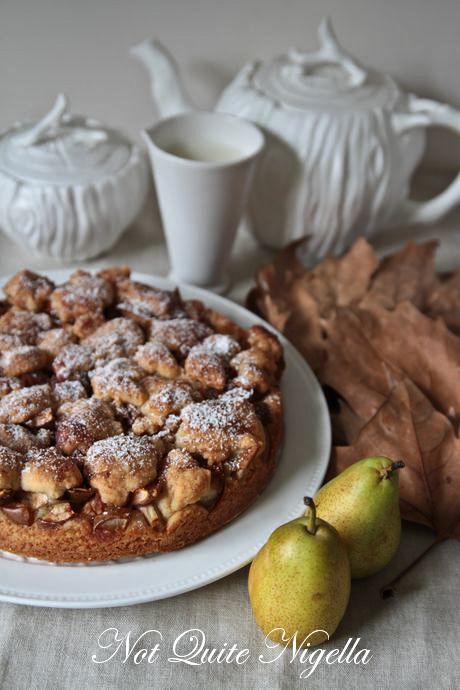 And this cake is an example of this. The rainy, cold weather of late has had me scrambling for comfort via food. And the best thing about it is that even if you don't have pears which are plentiful at the moment (I bought some adorable tiny Corella pears) you can also use apple. Hell, you could even use tinned apple if that's the way you want to go! :) It also uses wholemeal flour but not enough so that it tastes too wholemealy. The whole cake is mixed within about 10 minutes and you just leave the oven to do its thing for 40 minutes or so and you have a wonderfully warming, buttery yet simple tea cake.

I'm being a little unfair though. As far as mother in laws go, Tuulikki is a nice one to have. Sure she would love nothing more than for Mr NQN and I to turn vegetarian and wear purple flowing scarves and smell like patchouli but I think she has now accepted the fact that I will always love the luxurious side of life and mud unless it is in a face mask is not my chosen medium for dancing or playing in.

So tell me Dear Reader, do you like easy recipes or ones that are challenging? And are you the silent or talkative type? 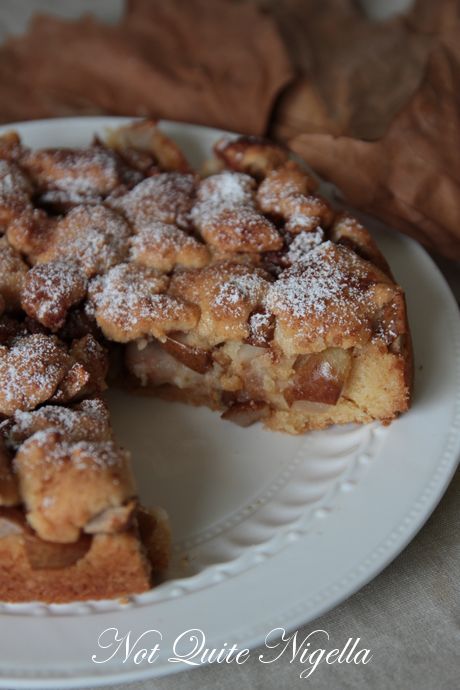 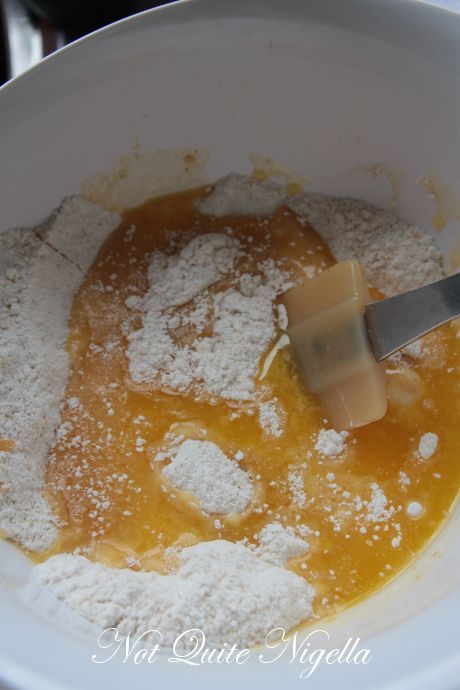 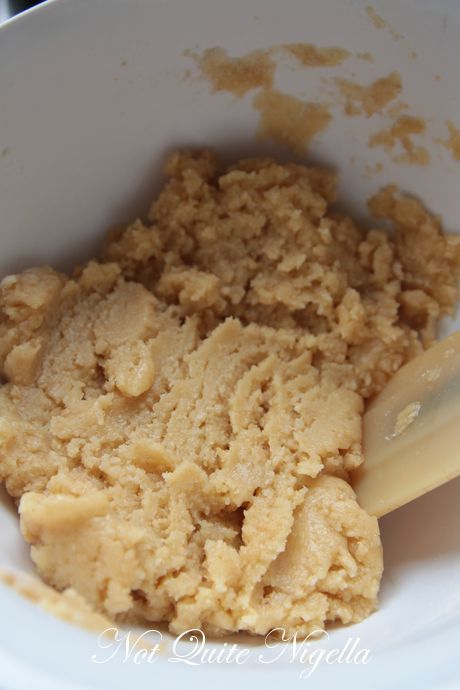 Step 2 - Mix the two flours, sugar, butter, egg and vanilla in a bowl. Press three quarters of the mix into the base of the tin-it will be like a sticky, buttery dough. Scatter the diced pears on top. Then place small pieces of the dough on it in a patchwork pattern so that the pear is not entirely covered up. 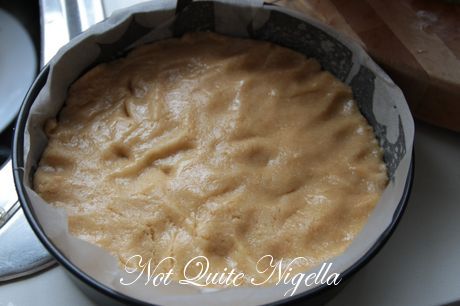 Layer 3/4 of the buttery mixture 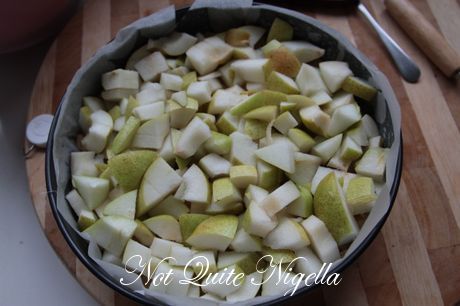 Then add the pears 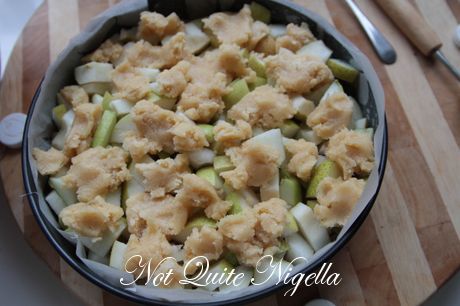 Then the rest of the dough scattered in pieces 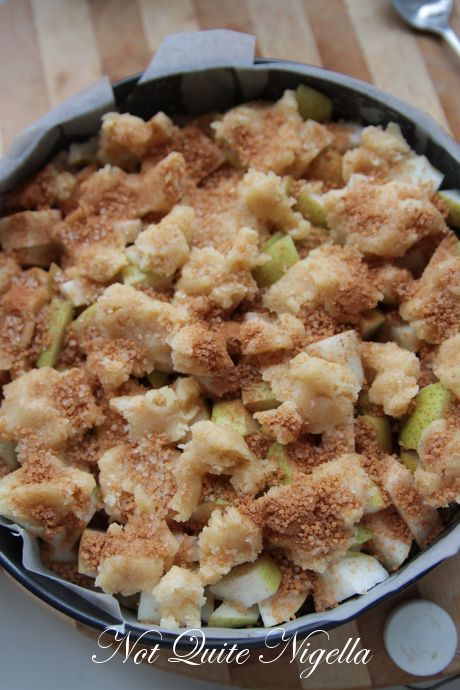 Sprinkle with cinnamon or vanilla sugar (I prefer vanilla sugar for pears and cinnamon sugar for apples). Bake for 40-50 minutes. Sieve some icing sugar on top. Allow to cool before slicing as it is very delicate when warm. 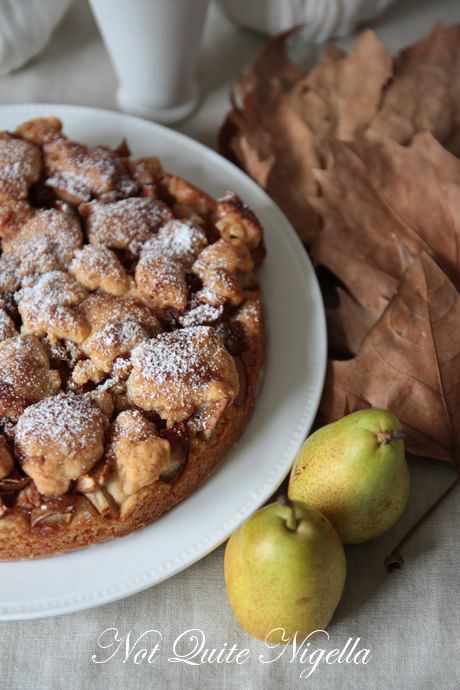