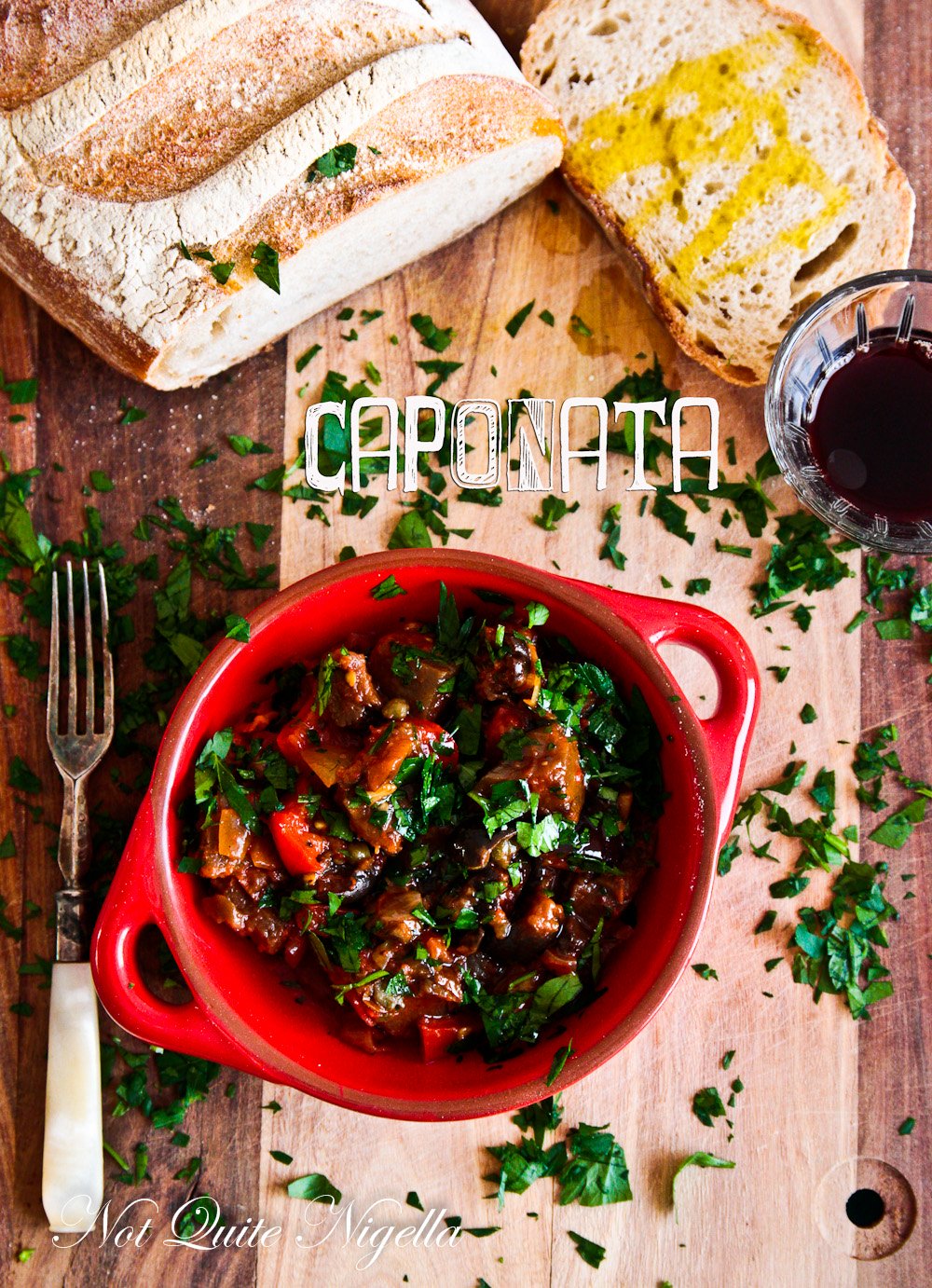 Dear Reader, do you ever think back to a memory and wince? When I recall something that I have done that I'm embarrassed about, I tend to sing out loud to drown out the memory. And the first time I made caponata is one of those times. It was also the first time that Mr NQN and I had people over for dinner as a couple.

We had invited Mr NQN's sister Amaya and her then fiance now husband Laporello over. Amaya is a vegetarian and that tends to dominate meals so I decided to make a caponata for the very first time. I had no idea how to cook eggplant so I grabbed the biggest two I could see and used them.

Being an eggplant virgin (and no that doesn't mean that I have sex with eggplants!) I hadn't cooked it before but I followed a Nigella recipe. I didn't know anything about salting eggplant or how smaller eggplants are preferable. I'm also not quite sure what went wrong and I didn't really taste it before serving it up.

"Mmmm it has a kind of funny flavour to it," Amaya said, scrunching up her face.

"Yes what is that?" Laporello said frowning. 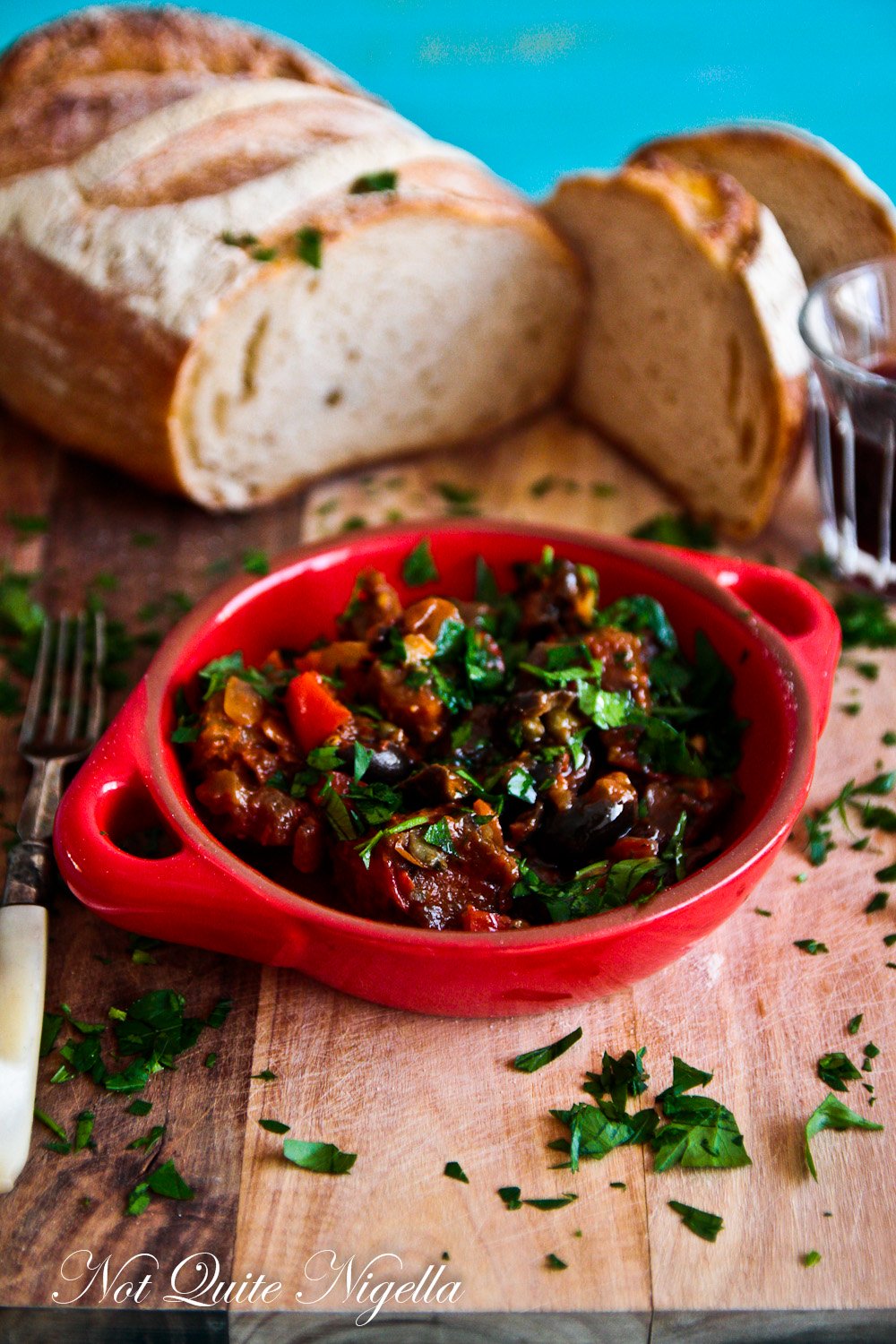 At that moment, I would have loved for a hole to have appeared in the floor and for me to disappear down a chute until they left. But of course it didn't and there was a funny flavour to it from using super large and I guess old eggplant. My mortification meant I didn't make caponata again for the longest time (and developed a habit where I tasted absolutely everything before I served it to someone else). It was only after I understood how to buy eggplant and how to cook it properly that I attempted to make it again.

Caponata is a Sicilian eggplant dish, full of delicious vegetables - a similar but different dish to France's Ratatouille. Unlike ratatouille, caponata is agrodolce which means that it is sweet and vinegary. Eggplant can be a tricky vegetable as it soaks up a lot of oil and if you are endeavoring to eat something healthy this can be vexing when you find yourself pouring lots of oil into a thirsty eggplant mix. This recipe cuts the amount of oil dramatically without sacrificing any flavour at all. The key to this dish is steaming the eggplant first before cooking it with the other vegetables. 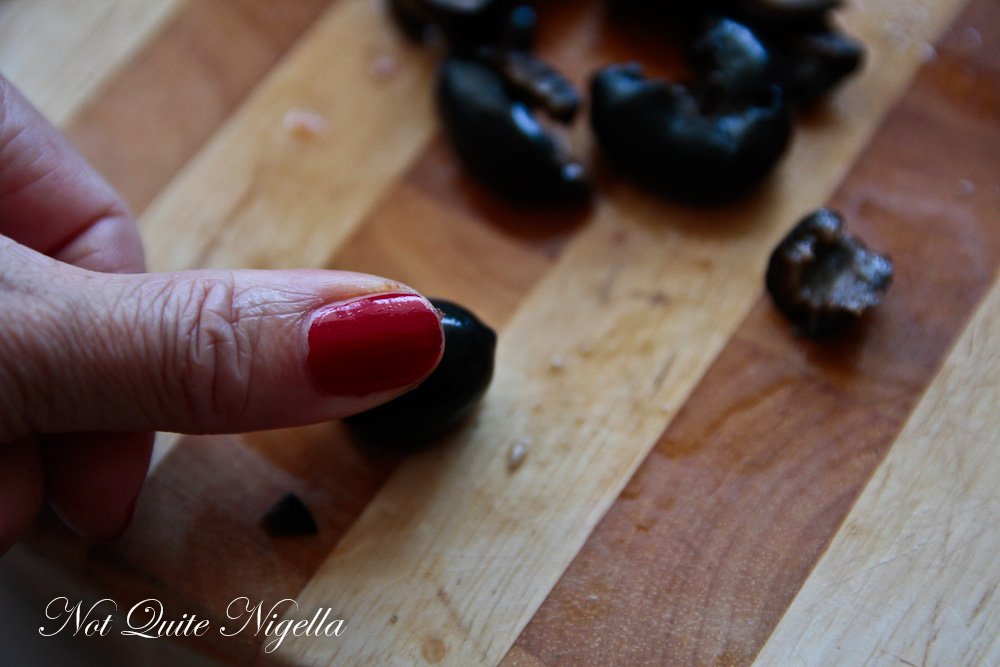 Steaming it does add some time to the process but this makes an enormous amount of caponata, easily enough to feed six or eight with salad or bread. I prefer to make this and then allow it to sit for a couple of days to let the flavours develop. And let me share with you a tip on how to pit olives too. Mr NQN accidentally bought olives with pits and the quickest way to pit them is push your thumb against them to try and feel the seed and the seed will pop out! 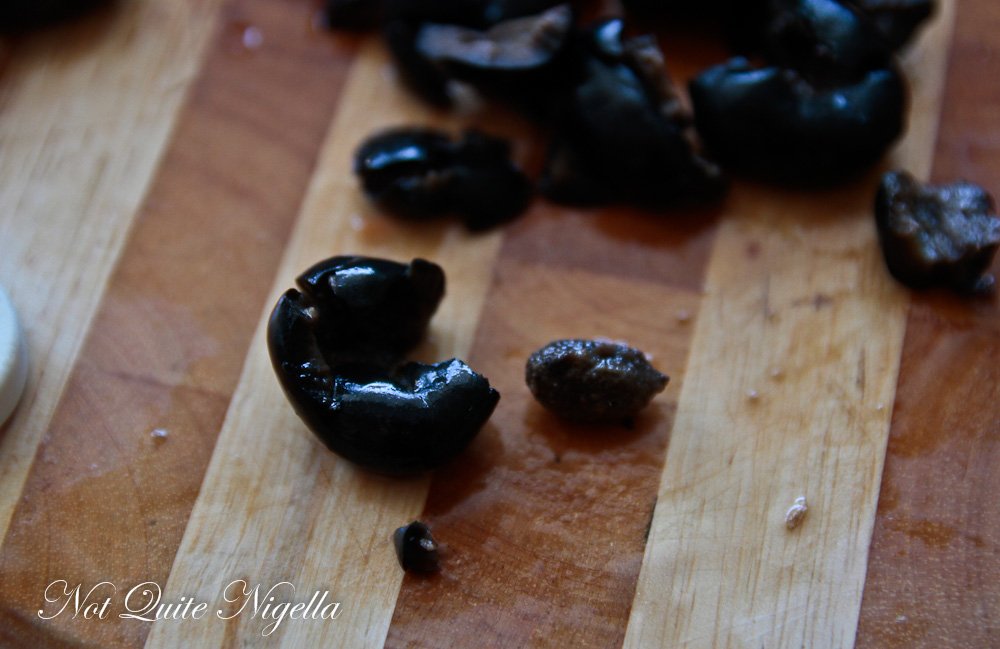 So tell me Dear Reader, do you remember your first dinner party? And have you served any disasters to guests? 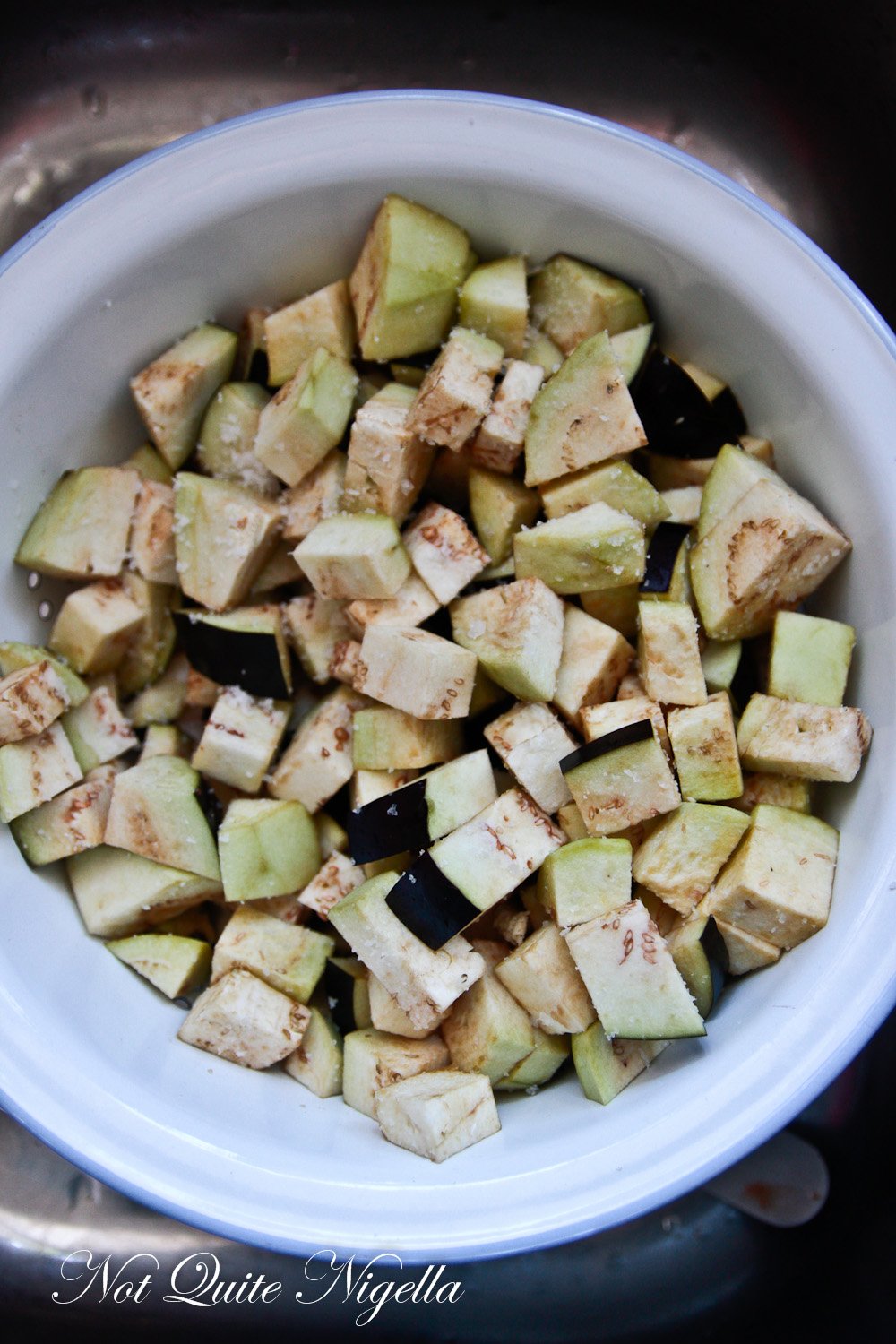 Step 1 - Trim the eggplant and peel half of the eggplants (peeling them makes it a bit softer and gives the caponata a better texture- you can peel all of them if you want). Cut into small chunks and sprinkle with salt while it sits in a colander - this removes the bitterness. Stand for 15 minutes then rinse well. Steam the eggplant until starting to get soft and coloured brown.

Step 2 - While it is steaming, dice the onions and garlic. Then cut up the capsicum and tomatoes into small chunks. When the eggplant has finished steaming, heat a large pot on medium heat and add a couple of tablespoons of oil. Fry the onion and garlic until fragrant and soft. Then add the eggplant, tinned and fresh tomatoes, capsicum, capers and black olives. Stir to mix and when it starts simmering, add the red wine vinegar and sugar. Simmer on medium heat for 20-25 minutes until the vegetables soften and develop a thick, glossy sauce. Season with salt and pepper.

Step 3 - I prefer letting this sit in the fridge for a day or two so that the flavours develop but you can serve this straight away too. Sprinkle with toasted pine nuts and fresh parsley.