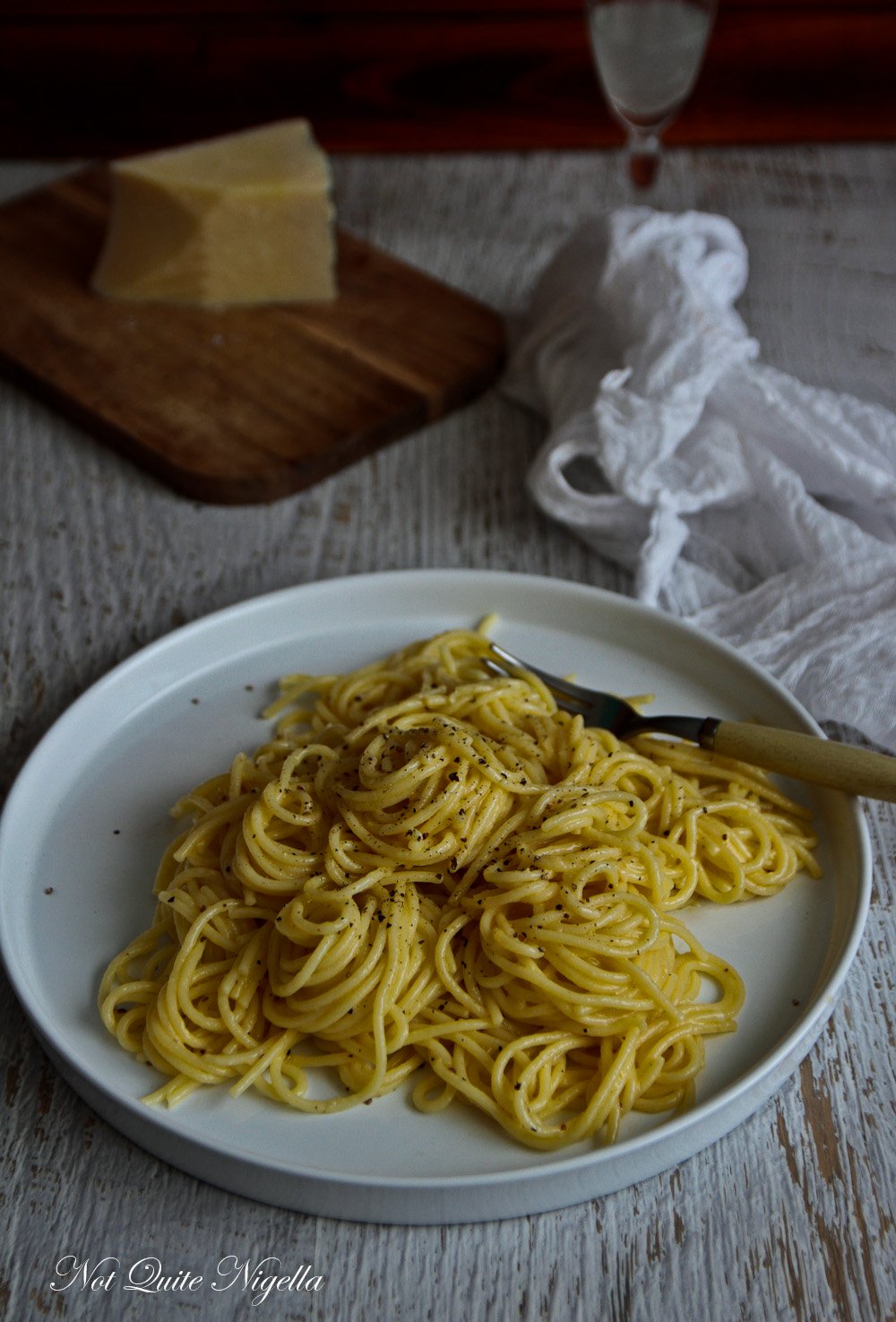 A creamy pecorino and black pepper spaghetti, Cacio e Pepe (meaning cheese and black pepper) is one of the classic pillars of Roman pasta cuisine made with just four ingredients. Made in under 15 minutes, it exemplifies that Italian food is often best when simple.

When Mr NQN and I were recently in Italy, I learned some more about regional Italian cuisine. We spent four glorious nights in Rome exploring the fascinating cuisine of the city. And we learned a lot. Like for example, pecorino is used mainly in this area because of the abundance of sheep. Pecora means sheep in Italian. And pecorino is often used instead of reggiano a cow's milk cheese which is more expensive.

Our time also confirmed that often Italian food is best when it is simple. On our second day in Rome, the chill of Autumn was setting in and with our stomachs growling, we took a seat at a restaurant in the Jewish quarter of Rome. The seats were uncomfortable, service was rude and poor Mr NQN had positioned his 6 foot 2 inch frame into a tiny, crooked chair. Eager to get ordering under way I pointed at a plate that many other people were eating.

They set down a plate of the golden coloured pasta slick with a creamy sauce and flecks of black pepper in front of me. I twirled a little of it onto a fork and then tried it. It was sublime. Suddenly the noise and the uncomfortable chairs and bad service didn't matter at all. This was a new dish for me, one that you don't often see or perhaps bypass because it sounds too simple. But it was incredible in flavour and its simplicity. 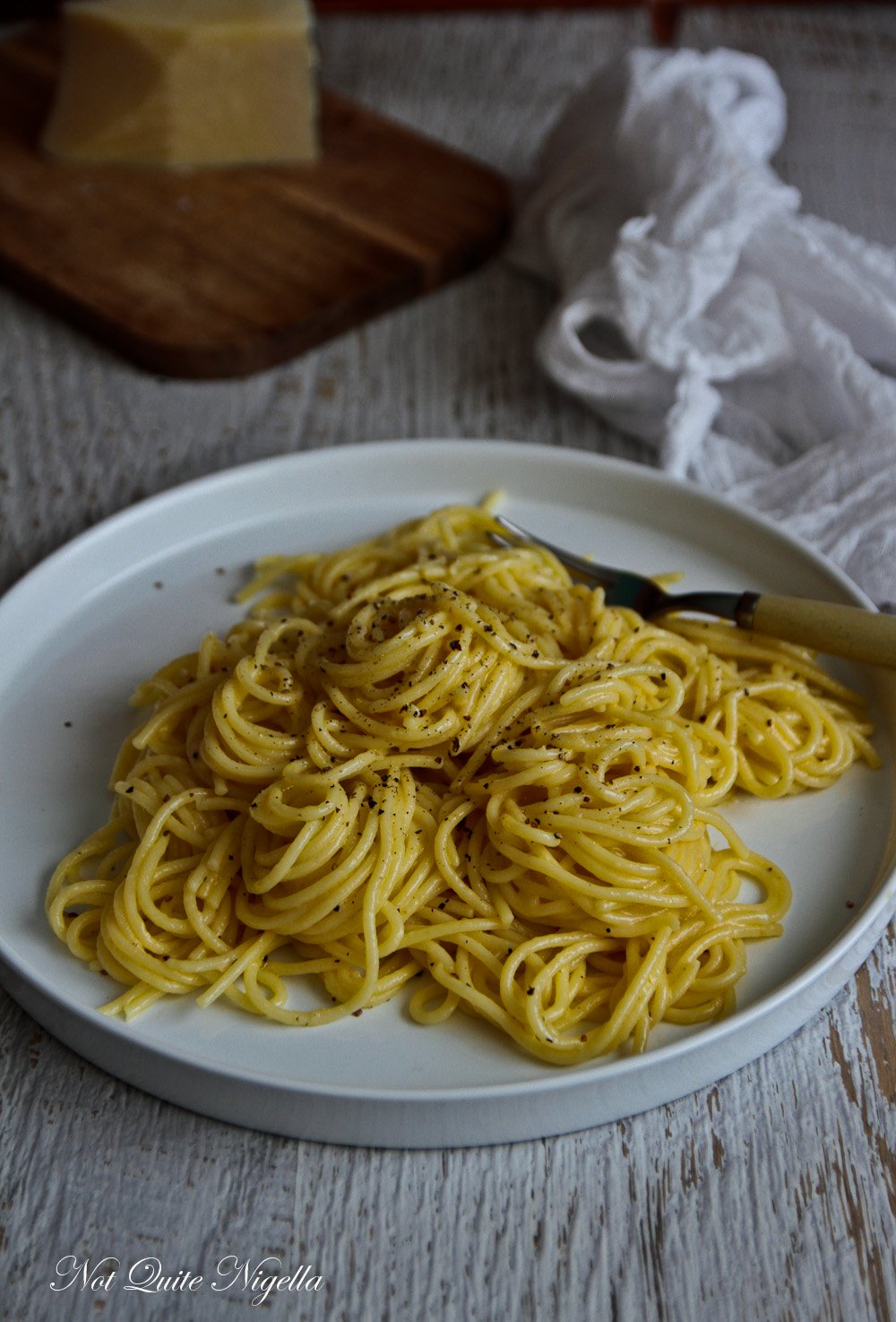 I asked about it and the waiter told me the name. Cacio e pepe. I love saying those words. Cacio. E. Pepe. It's like it has its own exclamation mark. Meaning cheese and pepper, it is so much bigger than just the sum of its parts. I looked more into it and was delighted to find that it is a simple recipe, ludicrously so really as it contains just four ingredients. They use tonnarelli, a long pasta similar to spaghetti but square in shape rather than round. You cook this and make a sauce with butter, pasta cooking water, pecorino cheese and black pepper. That's it. I know, it's almost laughable isn't it?

I couldn't wait to make this at home and see if it was in fact as easy as it seemed. I was a touch worried when making the sauce - you should have seen me fluttering around it like Chicken Little. The butter seemed to sit at the top for a while but I should have had faith Dear Reader because this sauce comes together once you add the pasta and cook it in the sauce. And the whole thing was done in less than 15 minutes! 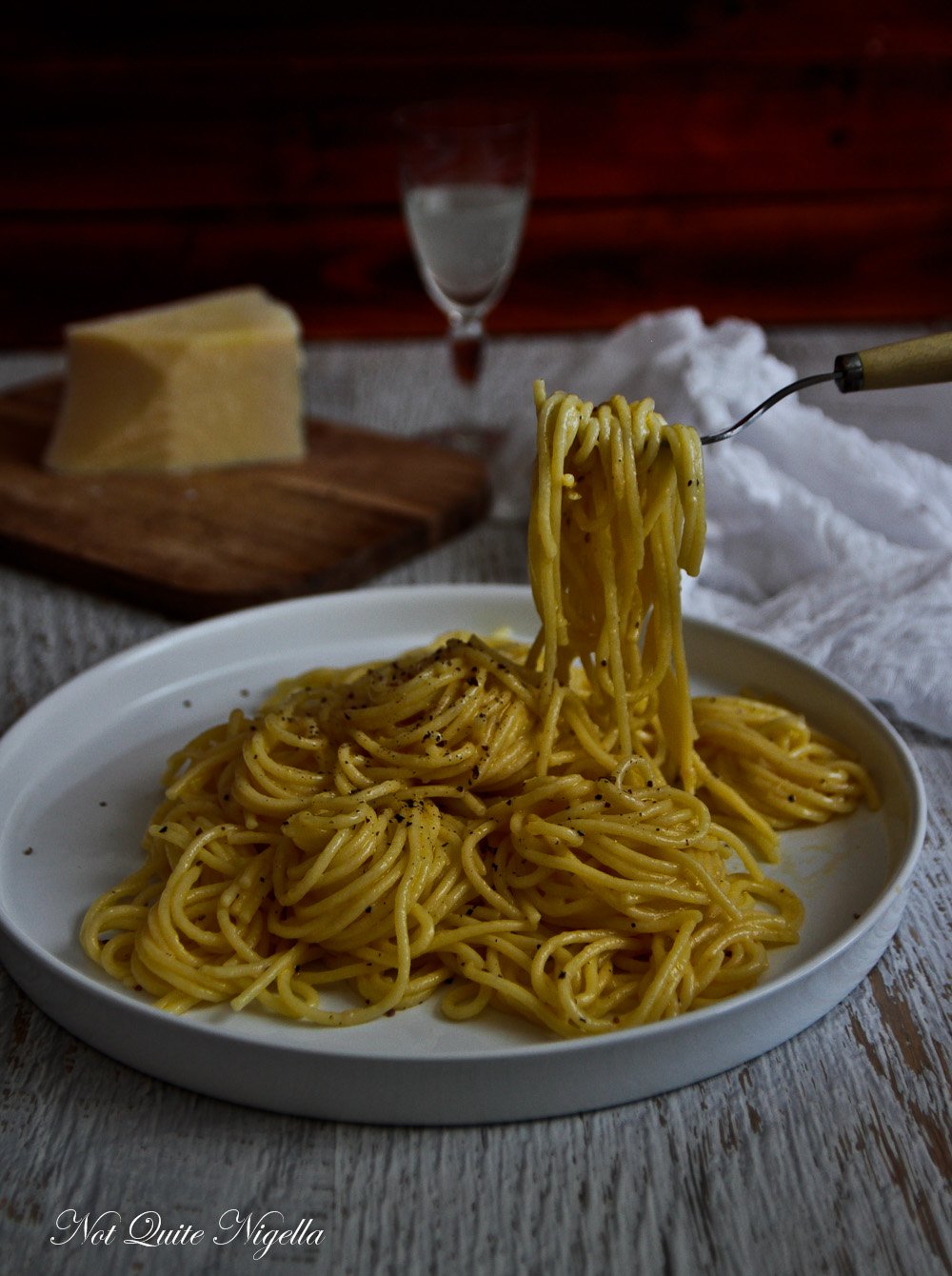 While the pasta cooks you can make a salad which I did along with grating the cheese. You might even find yourself with a surfeit of time while you wait for the pasta to boil. But if you love pasta, I urge you to try this simple but deceptively glorious dish. As it is a Roman Italian dish you don't often see it on restaurant menus in Australia unless of course you're dining at a Roman restaurant but it is so absolutely worth buying a wedge of pecorino for.

So tell me Dear Reader, what is your favourite pasta dish? Have you ever tried Cacio e Pepe? 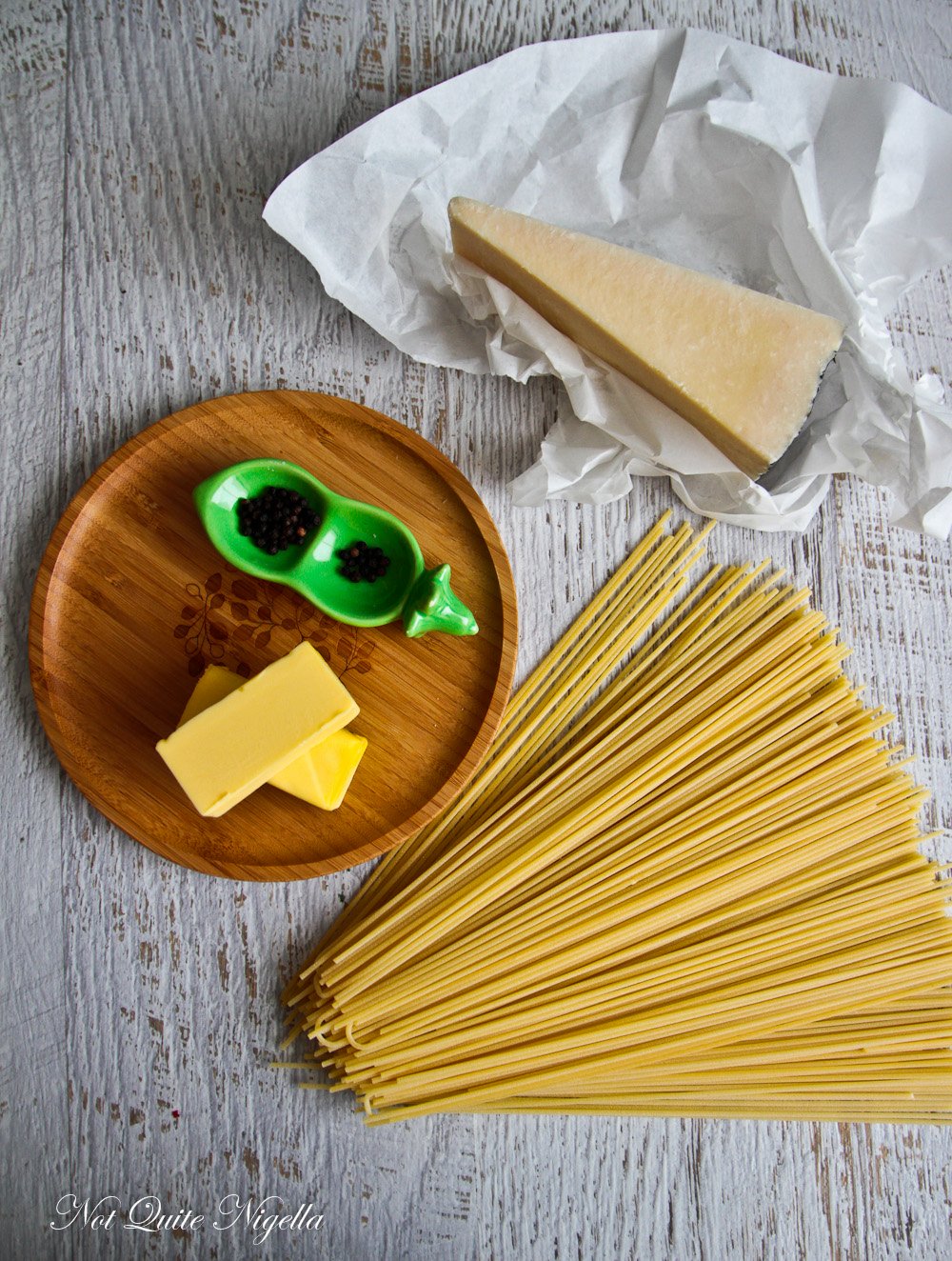 Step 1 - Boil the pasta in plenty of water (unsalted water, pecorino is already salty) for 6 minutes (knock two to three minutes off the cooking time). Reserve 2 cups of the pasta cooking water and then drain. 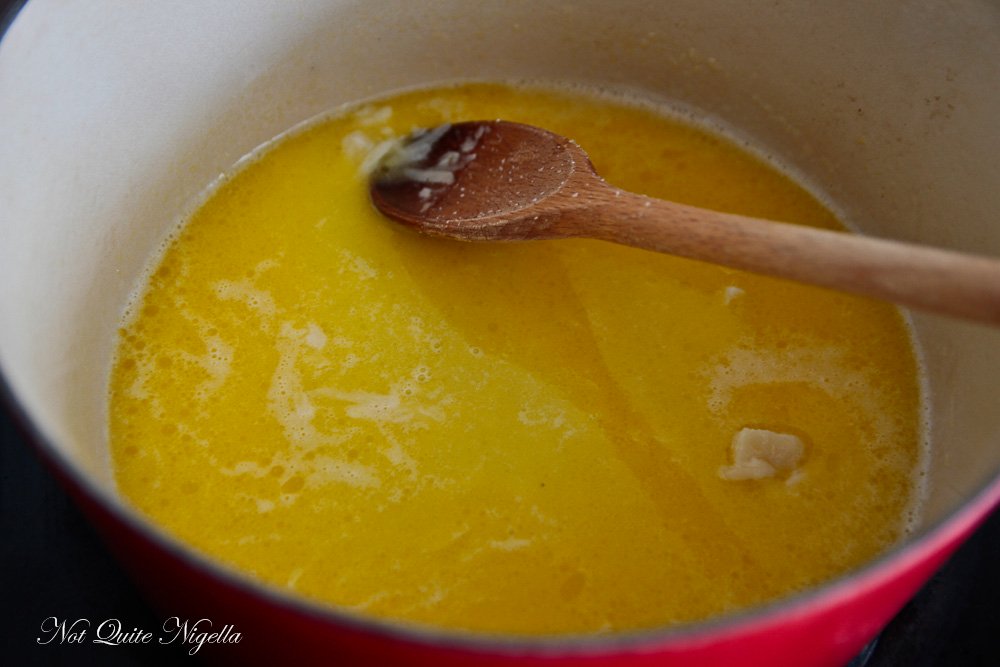 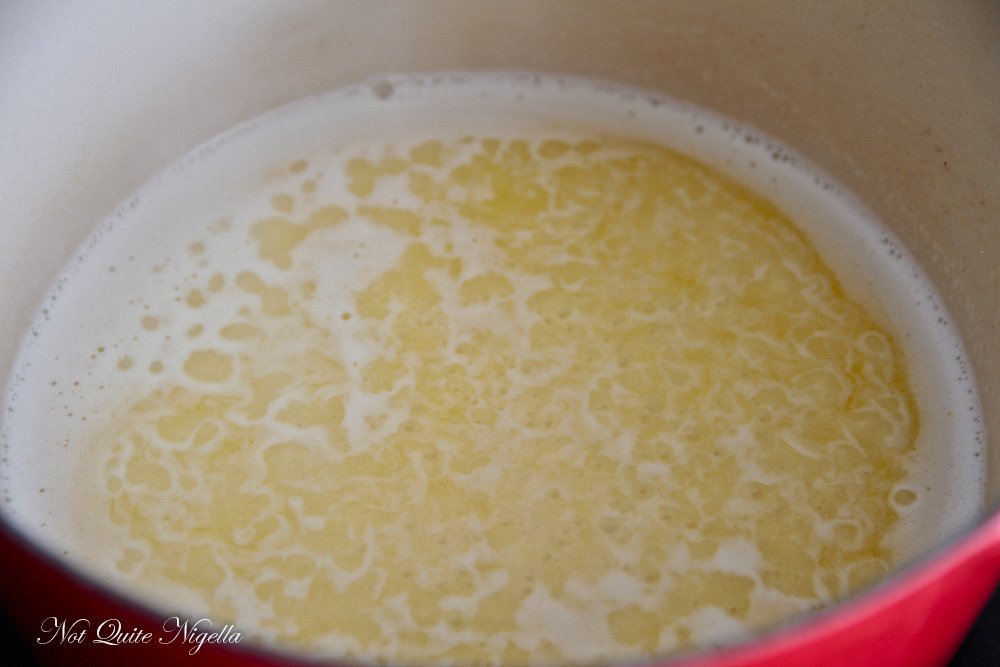 Step 2 - Return the pasta water to the pot and add the butter and the grated pecorino cheese. Turn the heat up to medium high and simmer rapidly. At first it will look like the layer of butter will sit on top but give it a little whisk just to smooth the sauce. Once the golden butter layer disappears and it turns white and bubbly, add the pasta. It will look like there is too much liquid but cook the pasta in the liquid for another two or three minutes. In this time it will turn into a gorgeously creamy sauce. Add a generous amount of black pepper and extra pecorino and serve immediately. This pasta is really best straight away and doesn't refrigerate very well once cooked.