I'd love to tell you that when I was in Kauai, I woke up at 6am before my alarm, did some yoga and then completed a 4 mile scenic hike. Alas, in truth, I woke up at 7:55am and didn't move until my butler brought me a cup of tea (and trust me, that's not a sentence that I speak every day). When I pull back the blinds an enormous rainbow greets me. I rub my eyes and with a contented smile I remember where I am and I nibble on a macaron left by the fairies of housekeeping last evening. At the St Regis in Princeville on the North Shore of Kauai dreams blur into reality. 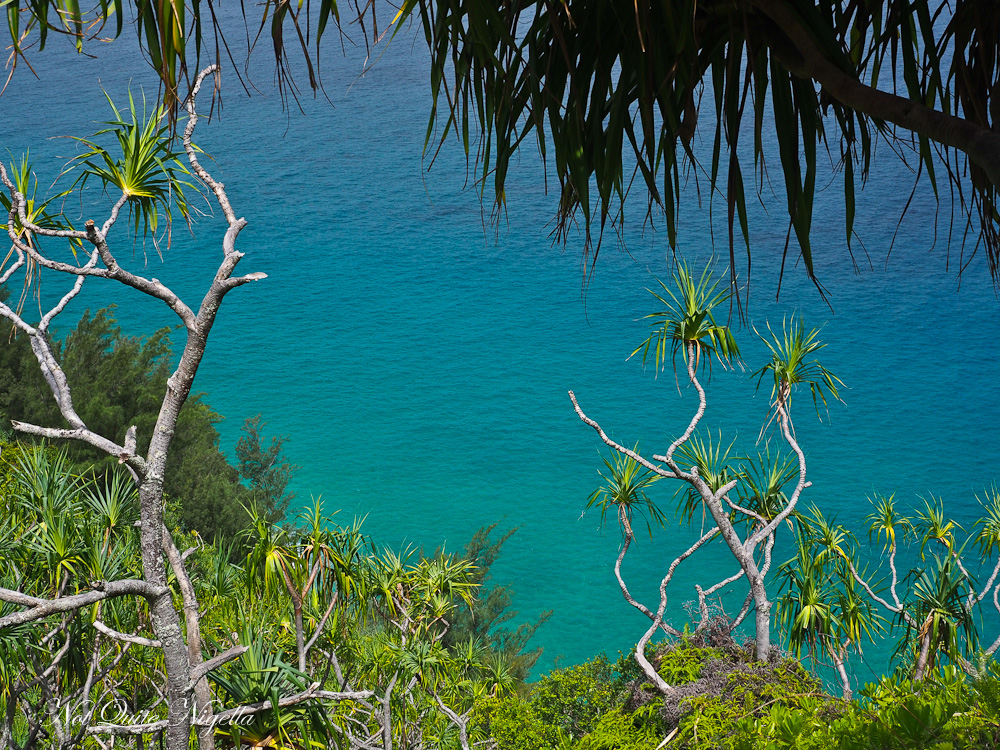 Mr NQN is determined to do the Na Pali Coastal hike and needless to say, while I love a good view, I straggle behind getting ready. After getting directions from the concierge and taking water with us, we take the 30 minute drive to the start of the Na Pali Coastal Hike. The Na Pali Coast is only accessible by helicopter or boat and is best viewed this way so that you can look back onto the rugged cliff faces. The coastal hike is also incredibly popular and offers a different but very beautiful perspective. 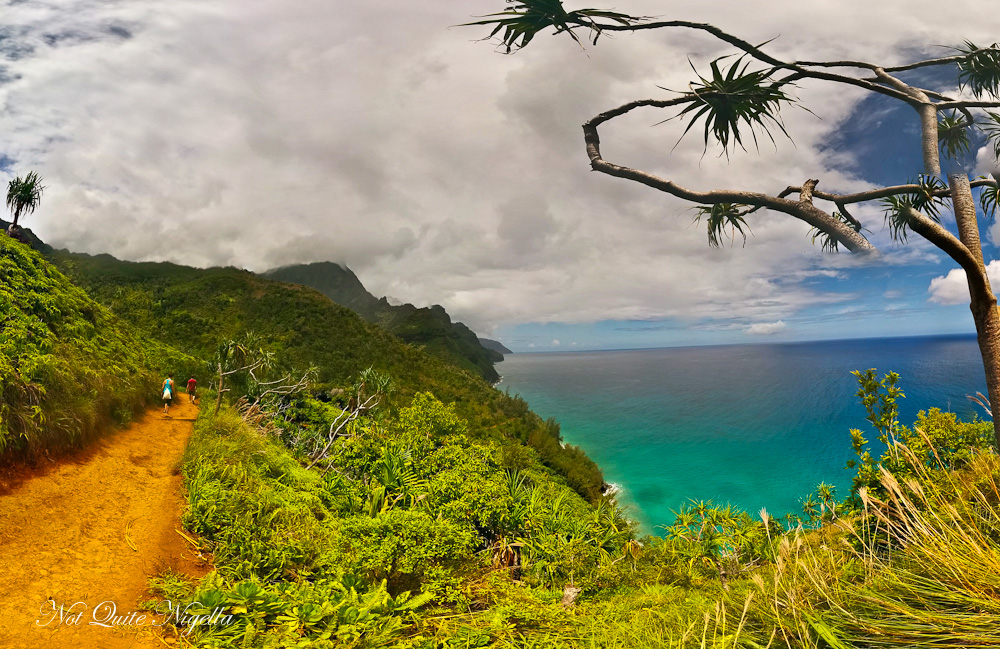 It is however a strenuous and energetic hike and not for those with any difficulties walking. Much of it is spent climbing rocks and over large, gnarled tree roots and if it rains which it often does (one of the peaks is dubbed one of the wettest places on earth) the rocky terrain is muddy. Mr NQN runs it and gets some spectacular photos.

We drive back through the town of Hanalei (meaning "lei making" or "crescent bay"), population of less than 500. Despite the small local population the small town offers visitors plenty of choice to eat, drink and do. Hanalei is also the location of where most of the island's taro is grown. The water soaked square paddies are numerous. Previous to growing taro, they grew rice.

Stilt houses are painted in vibrant turquoise the colour of the ocean while surfboards jut out from the ground asking motorists to "slow down". The many one lane bridges helps to keep things just that little bit nicer and more courteous - signs encourage each side to yield to the other with a local custom of 5-7 cars. There are plenty of hitchhikers trying their luck. 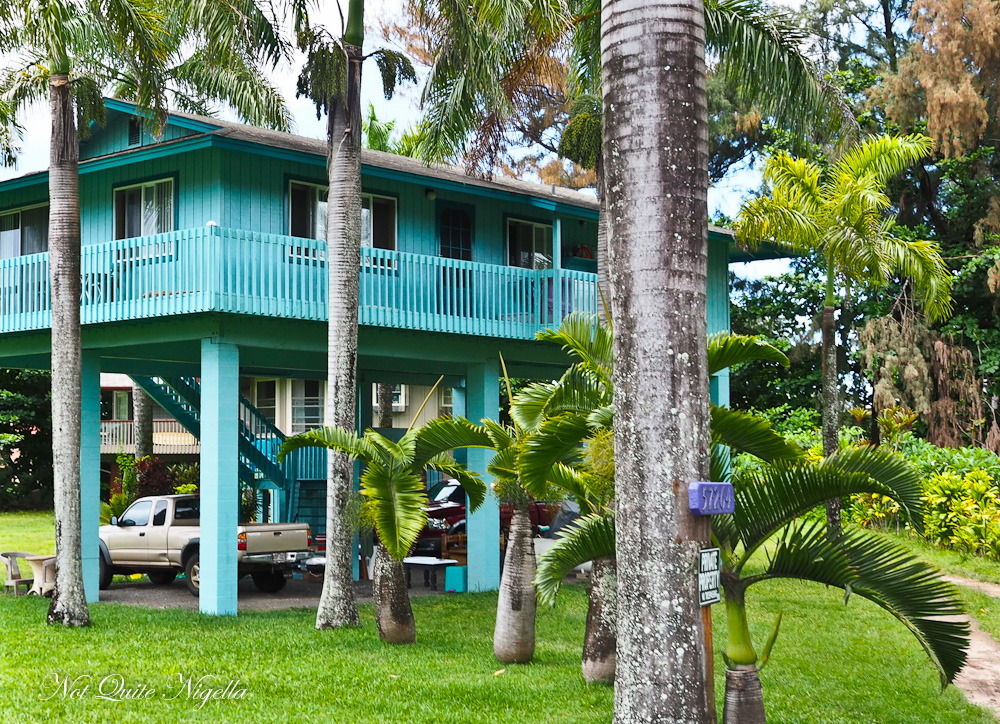 Hanalei has its own fascinating history - it has a place in cinematic history reaching back to the film South Pacific where the the town and Lumahai Beach offered itself as a backdrop. It is also mentioned in the song "Puff the Magic Dragon" in the verse "In the land of hanah lee" referencing apparently the superb marijuana grown there. And more recently a scene from the 2011 film The Descendents was filmed in a local restaurant Tahiti Nui.

Tahiti Nui (meaning "big Tahiti") is Kauai's oldest restaurant and is known for its Mai Tais. The walls sport a range of framed photographs detailing Louise and Bruce T. Marston. He was a Lt. Colonel in the United States Air Force from Pasadena and she was a a descendant of Tahiti Royalty in the lineage of King Tomatoa and a native of Tubuai, Austral in French Polynesia. 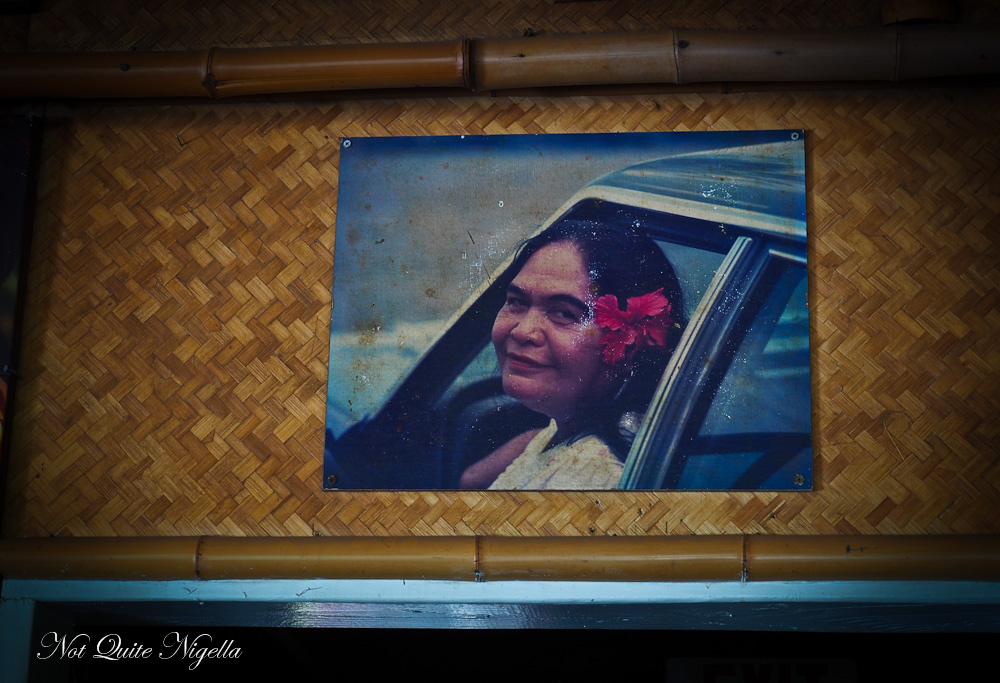 They met in Papeete, Tahiti and were married and then moved to Kauai. Known for her spirit of Aloha, Louise left a strong legacy before passing away in 2003. Three generations of the same family have owned this restaurant. We take a seat in the corner and I try to see where the scene featuring George Clooney and Beau Bridges would have been filmed. They sat on the bar stools at the end (a framed picture marks the spot). 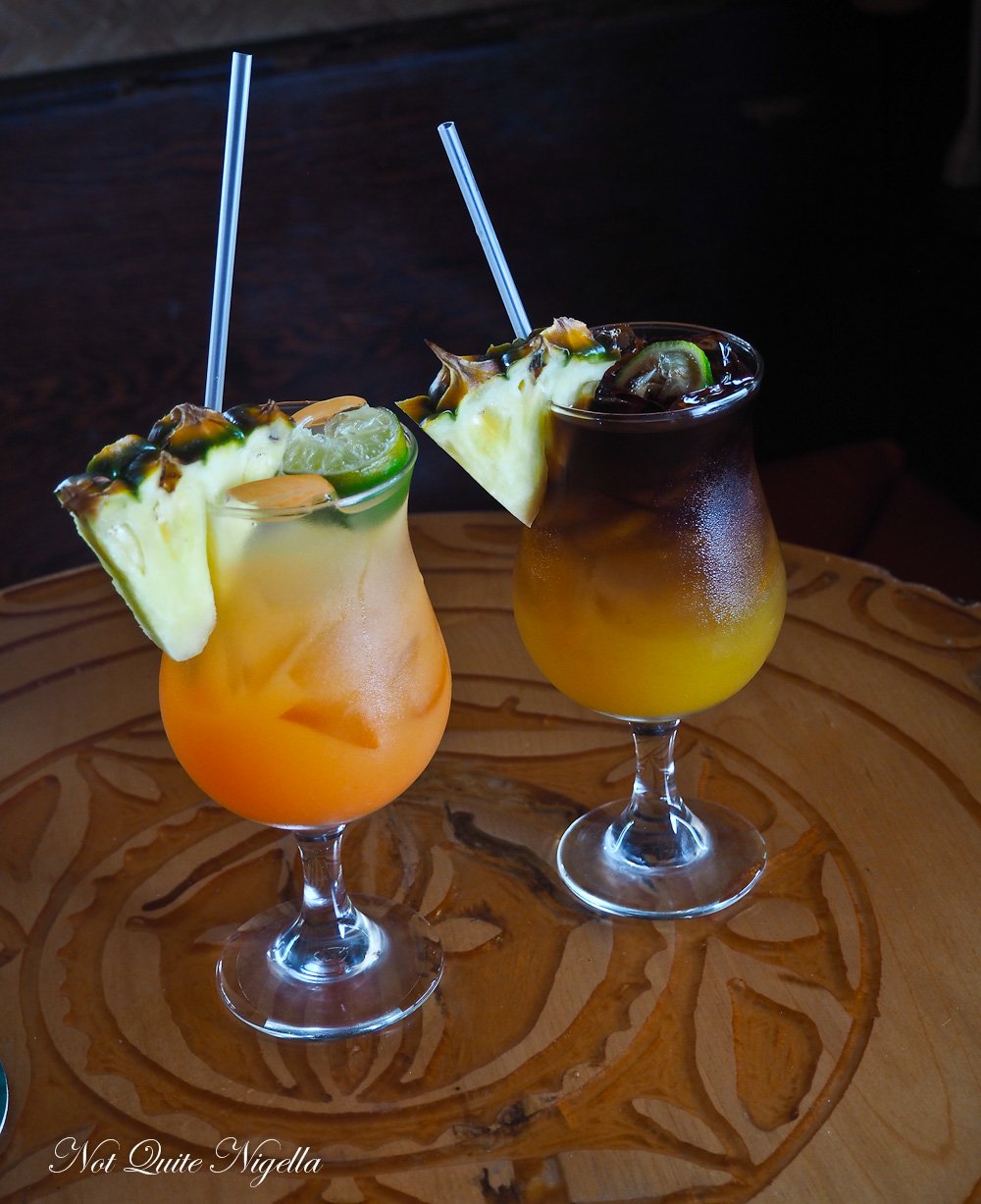 The Mai Tai's secret recipe was devised by Louise Marston herself. It has to be said that it is absolutely delicious and well worth ordering. 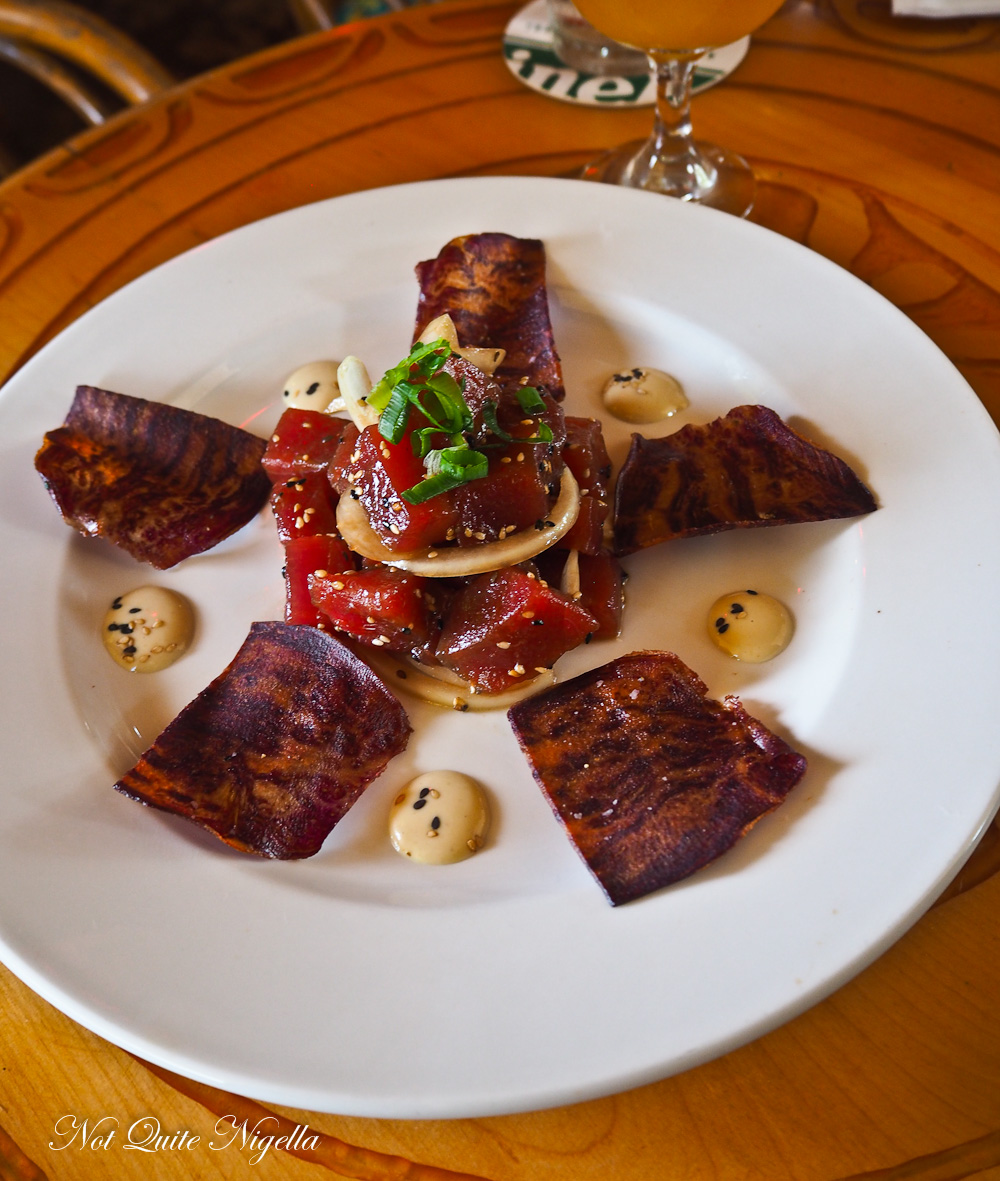 We also try one of their signature dishes. Keaki's poke chips are made with seasoned sashimi ahi tuna cubes dressed with sesame and green onion with small dabs of mild wasabi aioli and freshly fried local taro chips. This is also done with breadfruit or Ulu when it is in season. It's a delicious dish with plenty of flavour and crunch. 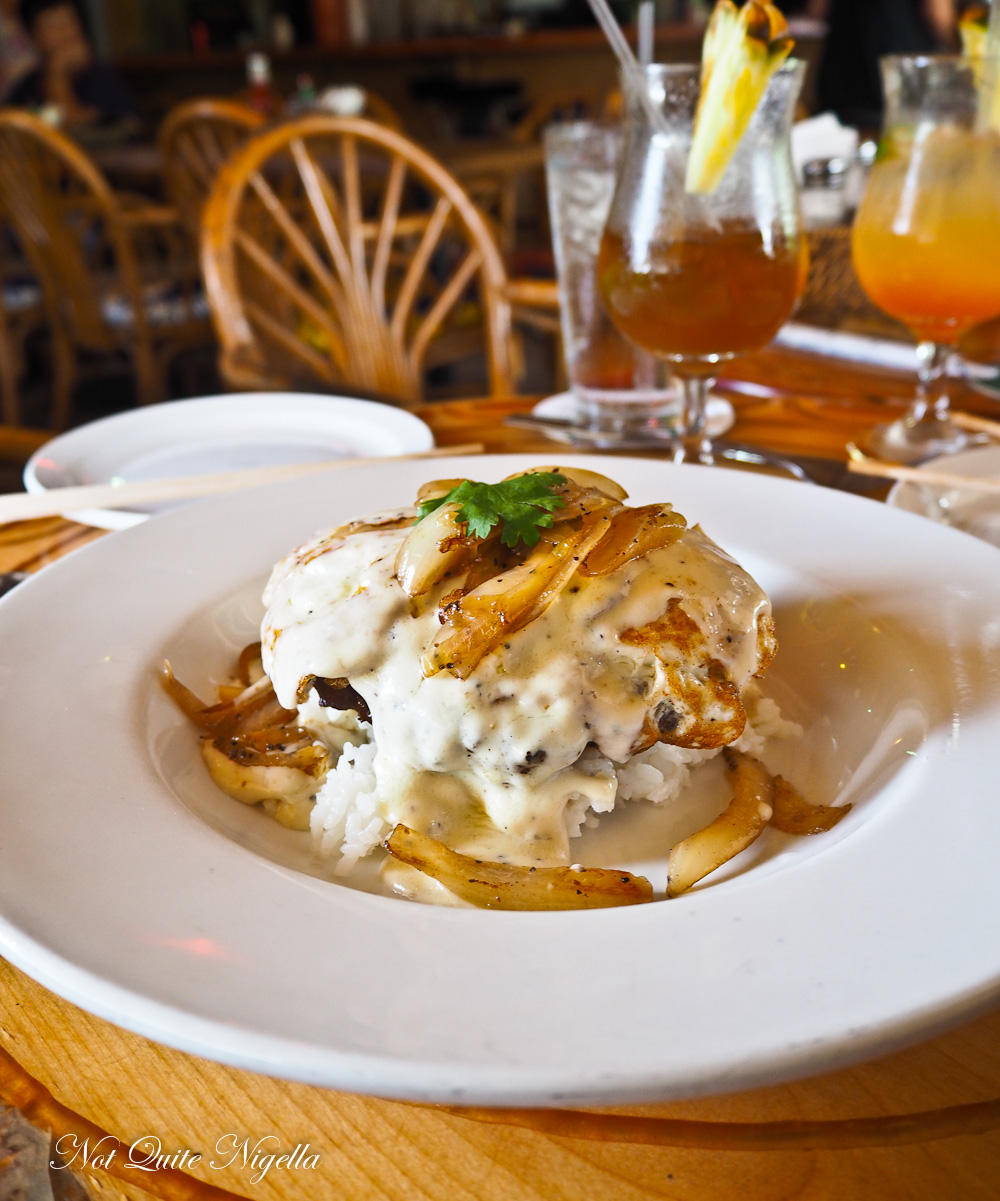 Another popular item is the Loco Moco and is a variation on the local plate lunch (meat, scoops of rice and salad) in a different form. The Tahiti Nui loco moco is a grilled hamburger pattie with two soft yolked organic eggs and a creamy home made pepper gravy and caramelised onions served on a bed of white (or brown) rice. White rice is more traditional and this is the sort of meal that keeps surfers sustained. I've had this with a brown gravy too and both are good and I like the fact that the gravy tastes like a real gravy and not out of a packet. 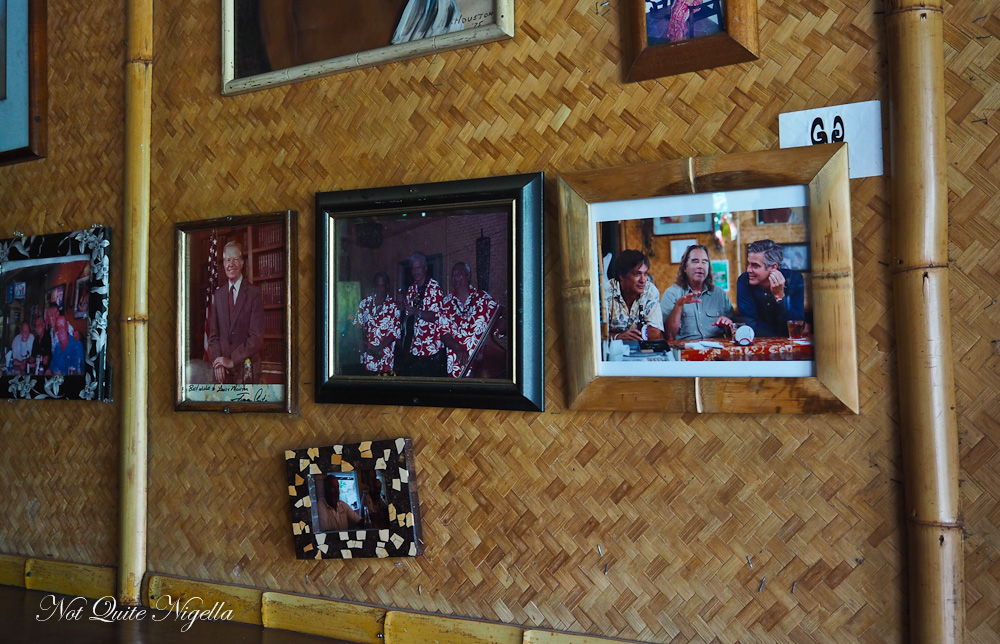 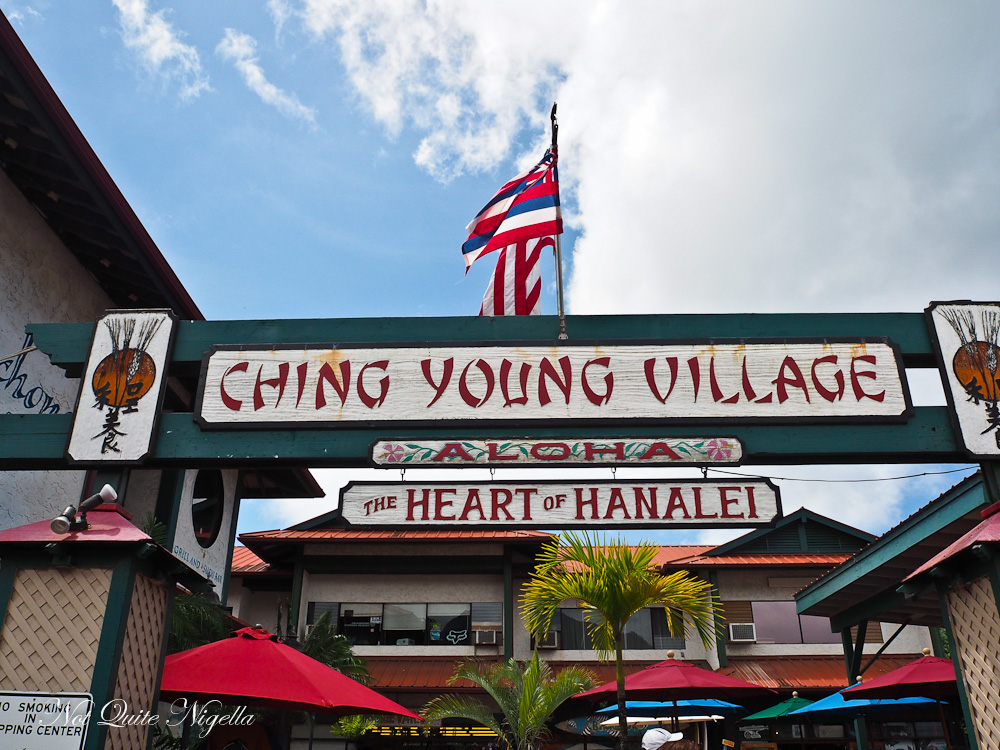 We take a walk around Hanalei. Ching Young Shopping Village has a range of surf and trinket shops as well as outdoor eateries. Puka Dog is a popular hot dog stand serving Hawaiian style hot dogs. There is a choice of two types of sausages-Polish or vegetarian (made with non GMO soybeans). 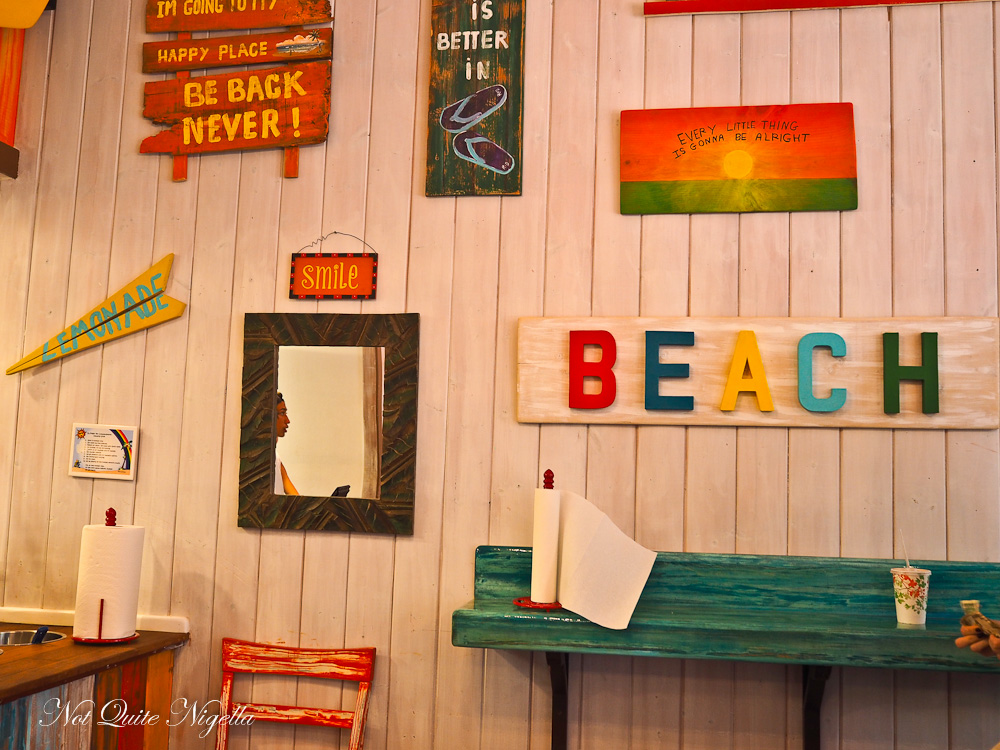 From there you choose the level of spice from four, the fruit relish made with tropical fruit (papaya, pineapple, mango, banana, star fruit and coconut) and then a traditional or Auntie Lilikoi's Hawaiian mustard. We go for a Polish sausage with the "Lava" habanero hottest chilli and a coconut relish with lilikoi mustard. 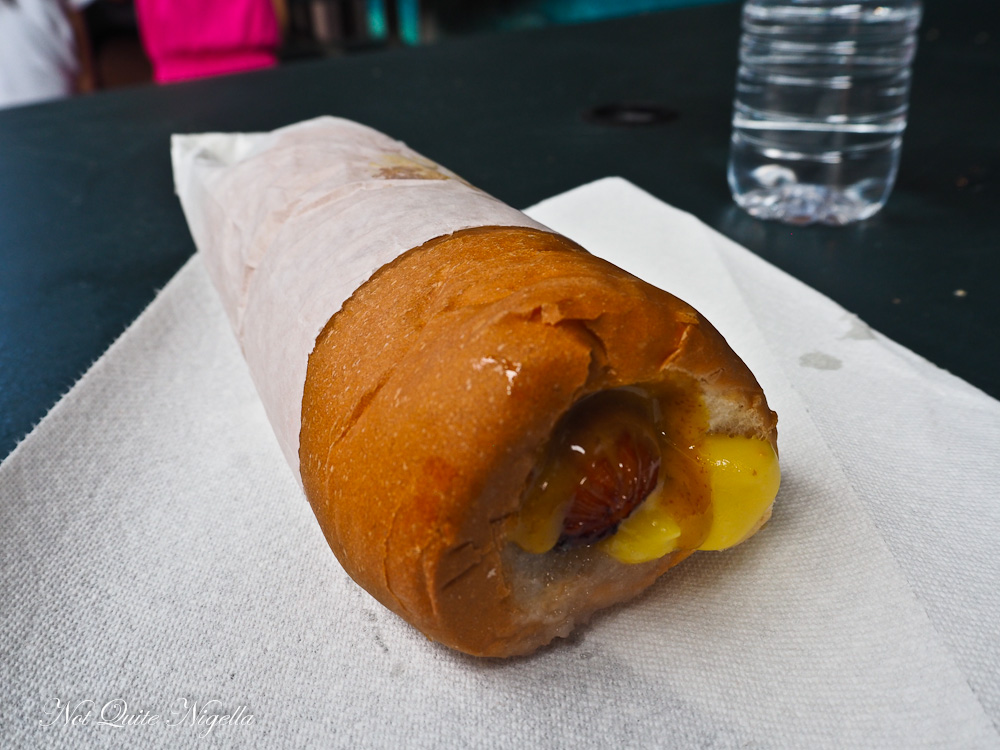 The hot dog comes lodged within the bun. The sausage is juicy and slightly smoky and the relish, garlic lemon chilli sauce and mustard are sweet but fittingly so. 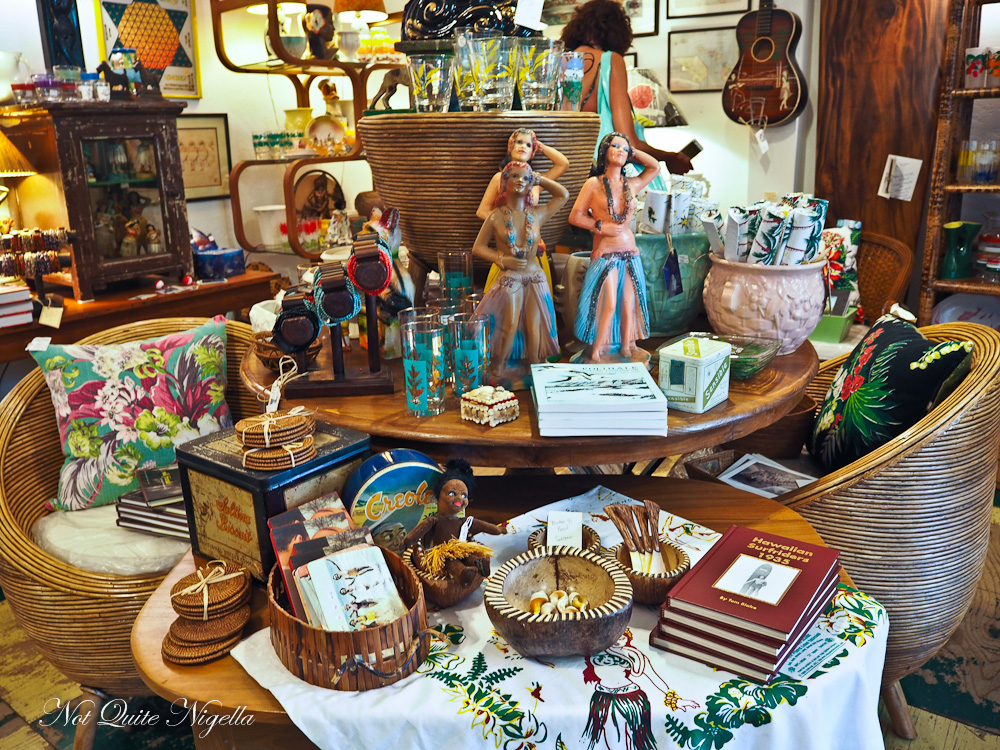 There are plenty of fruit juice stores and shops to pop into-Yellowfish Trading Company sells a gorgeous range of genuine Hawaiiana antiques and contemporary furnishings and gifts. I spot a small range of amazing 1950's ties. 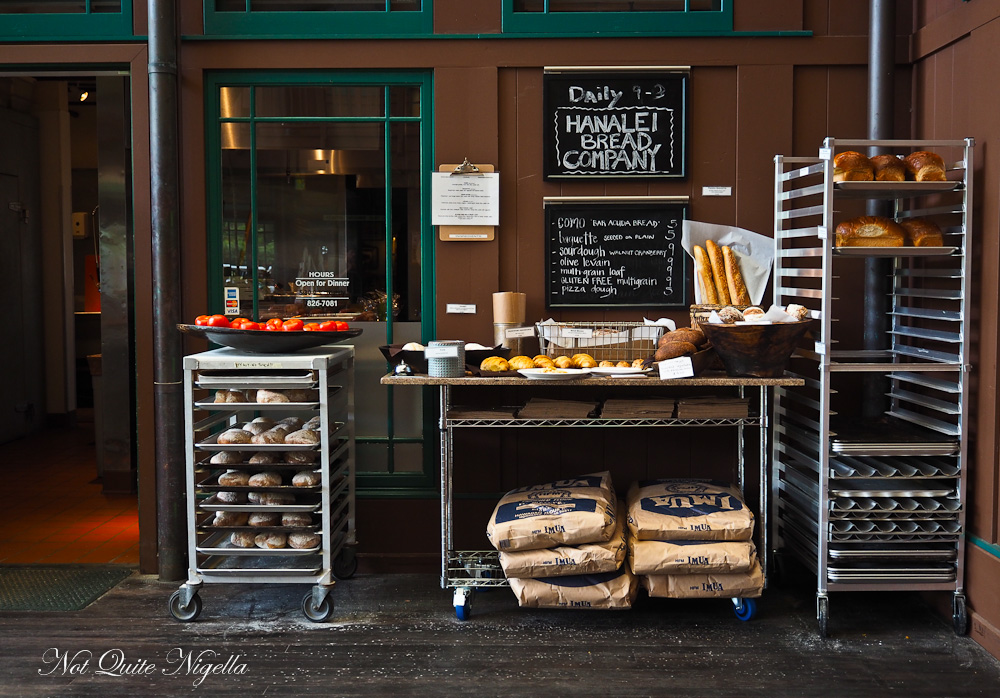 One store sells a good range of organic items while the Halanei Bread Company, open for just 12 days on our visit bakes breads, scones and croissants and their "Como" bread bun, made popular at Baracuda, a popular tapas bar. 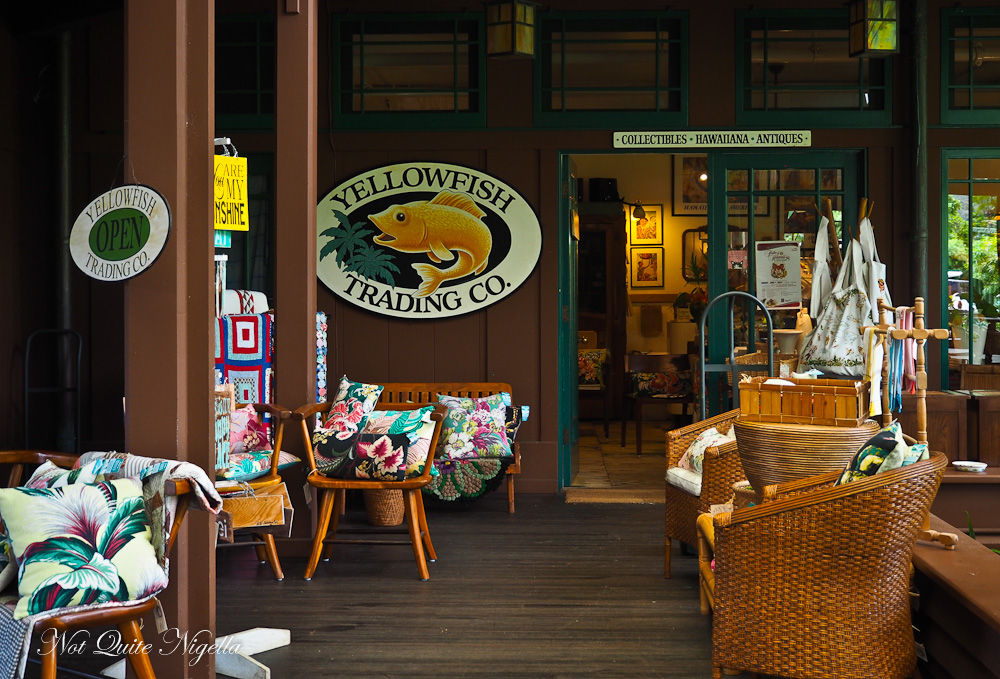 The best coffee on the island is purported to be at Hanalei Coffee Roasters. They're friendly and efficient here and before you even know it, your coffee is ready. 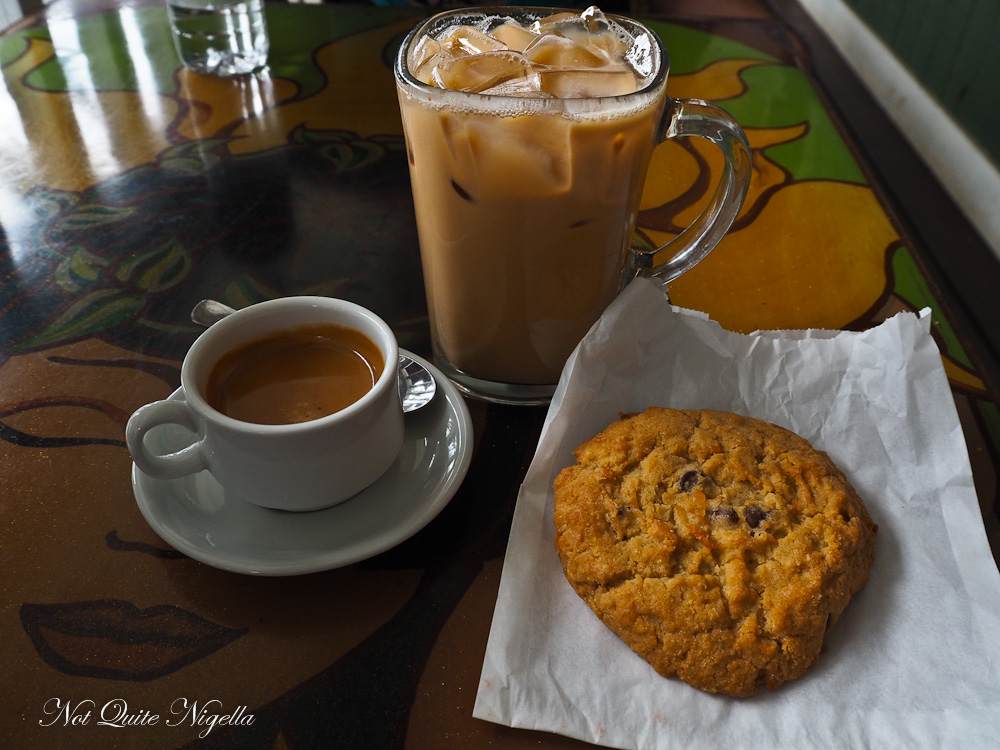 We take our drinks and cookie and move to a table outside on the verandah. The coffess are excellent. We chuckle as we read the noticeboard nearby that says that notices will be "cleared periodically by the full moon or the hurricane winds". We wait while a sudden downpour dampens chasing everyone from the street under shelter. The thing about Kauai rain is that five minutes later, it is shining bright.

So tell me Dear Reader, have you ever visited a place that you have seen in movies or on television? And are you a hiker? 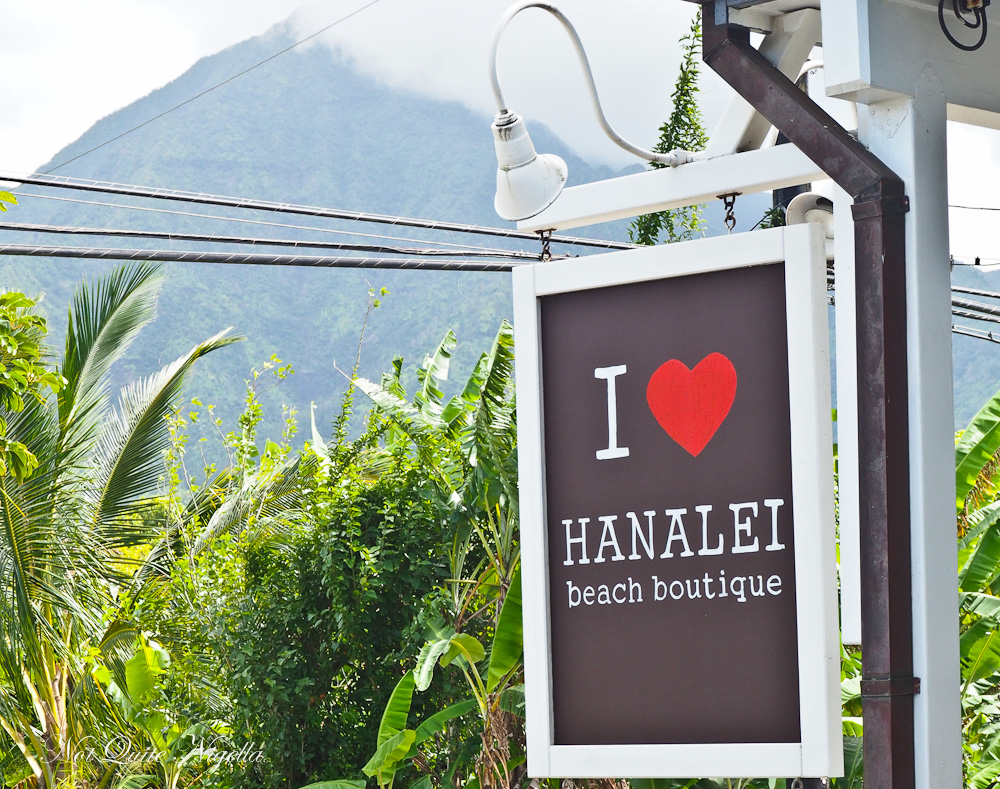 NQN visited Hawaii as a guest of Hawai‘i Tourism Oceania