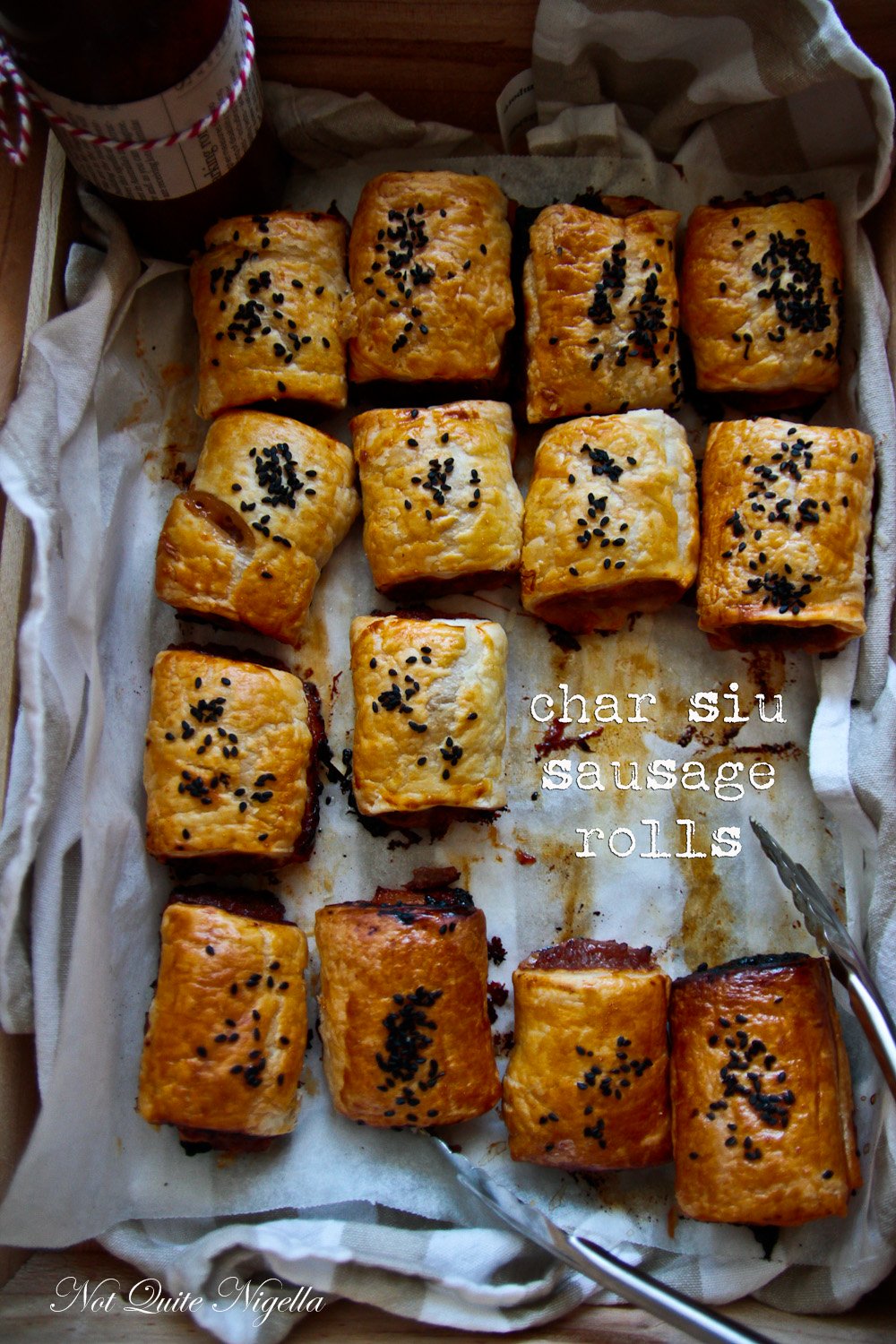 Sausage rolls, those wonderful Australian school canteen treats are given a multicultural twist with a char siu or bbq pork flavouring. These fantastic sausage rolls are full of flavour and perfect for feeding a crowd on Australia Day or for a beach side summer picnic.

Do you have one of those obsessive personalities? I realise that I do, and often when I delve into an obsession I do so with much vigour and passion, devoting hours, days and months (sometimes years) into something only to emerge at the other end blinking and with a somewhat bewildered look on my face. There was an obsession that I had collecting particular make up items (assisted by the fact that I wear enough make up to power a drag queen, I always argued that it was practical). Obsession with television shows isn't anything new for me and I will watch them until 3am trying to prop my eyelids open. 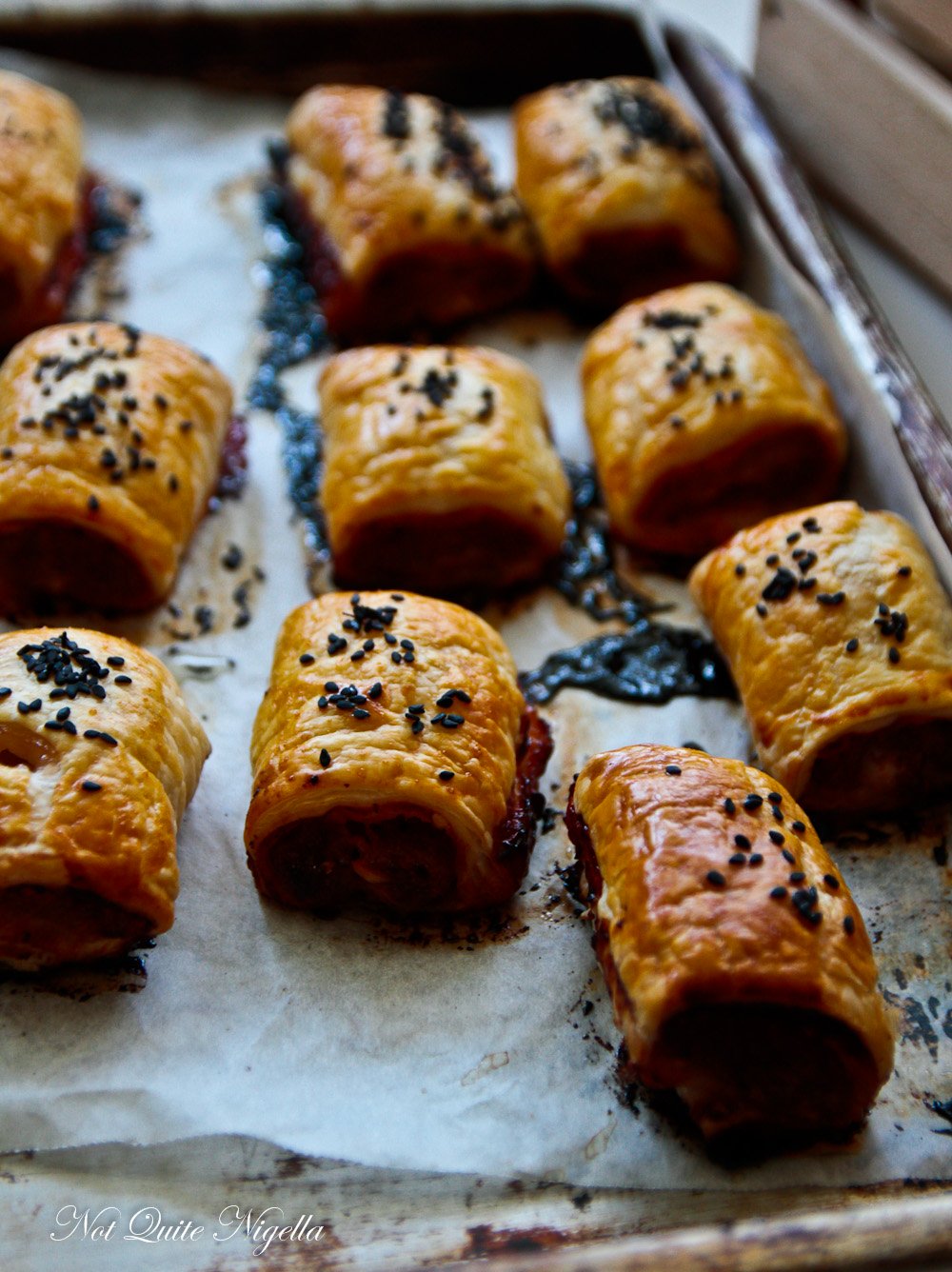 There was one thing that I only realised quite recently I am obsessed with. Sausage rolls. If you're Australian you'll know what these are although I'm not sure if sausage rolls have made it to other parts of the world. They are made of a sausage filling encased with puff pastry dough around the outside and they are frightfully addictive. Usually served with tomato sauce they're as Australian as meat pies although my radar points more towards the sausage roll than the meat pie (although I'd chuck neither out of bed). Australian kids are usually introduced to these through the school canteen or tuck shop or during birthday parties where small versions are served. Home made ones are much better as you can use good quality mince in them and they're actually not too onerous a task.

It was only when I was putting together a list of Australia Day recipes for the Iced Vovo Cupcake recipe that I realised that I have made five types of sausage rolls. This is not only because I love them but Mr NQN does too and if I go away for an extended amount of time, furnishing him with a week's supply of these helps ease any potential tension. I decided to play with some flavours for Australia Day. I feel a couple of the best and most unique things about Australia is how multicultural we are and how this has influenced our food. Contemporary Australian cuisine is one of the best in the world partly because we aren't confined by the strictures of food history because we are a relatively young country. So I decided to make char siu or bbq roast pork flavoured sausage rolls. 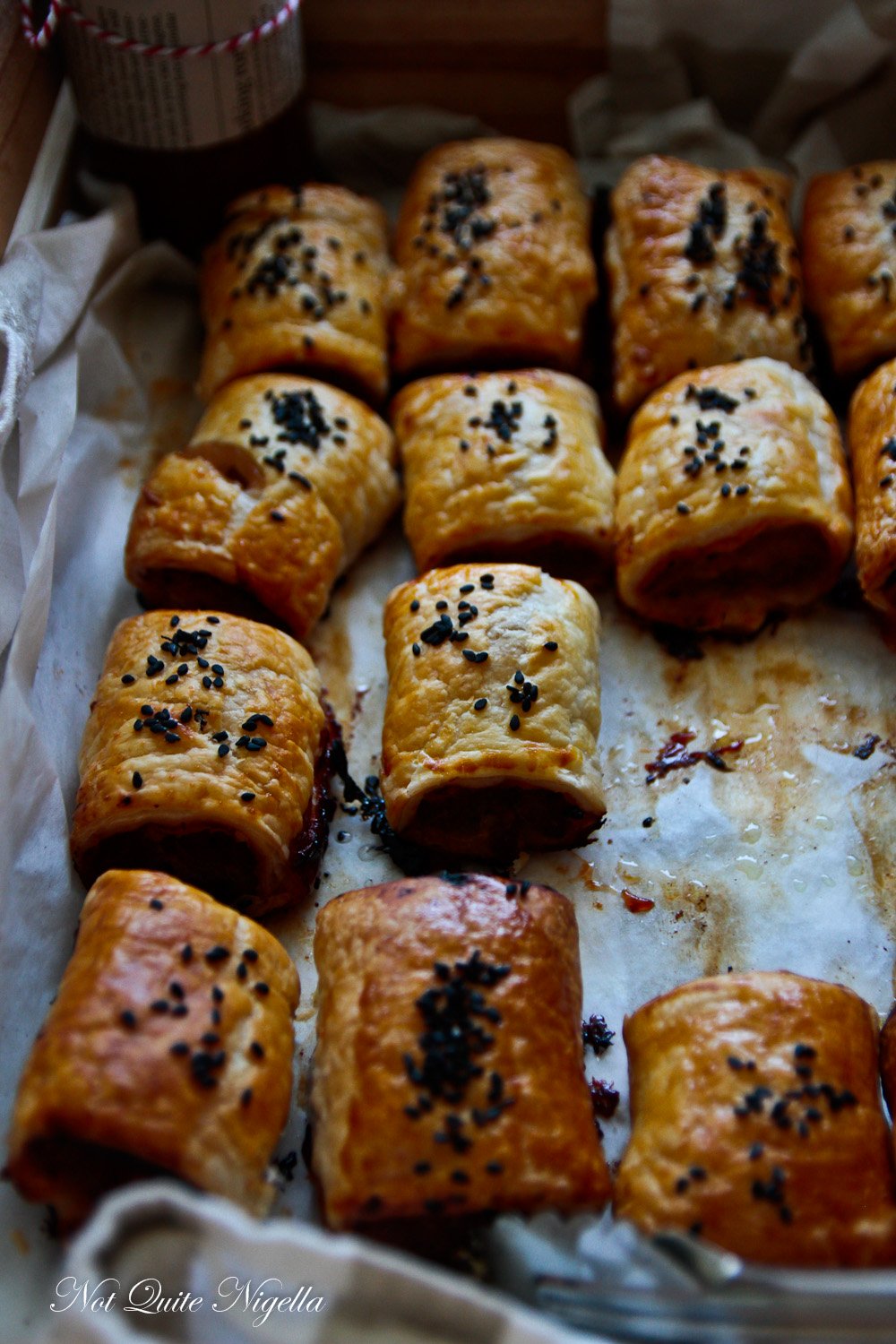 Making these with actual char siu would be a great idea and not unlike those pastry triangles that you get at yum cha. But I wanted to see if I could evoke the flavour using pork mince. It turns out that it is surprisingly easy! And yes this is a pushy recipe Dear Reader, fabulously in both flavour and simplicity! The sauce provides an instant flavour boost and the combination of the flaky pastry and saucy filling with a honeyed sweetness means that these are a little too irresistible! Eat these with a crowd!

So tell me Dear Reader, what are you currently obsessed with? And do you prefer meat pies or sausage rolls? 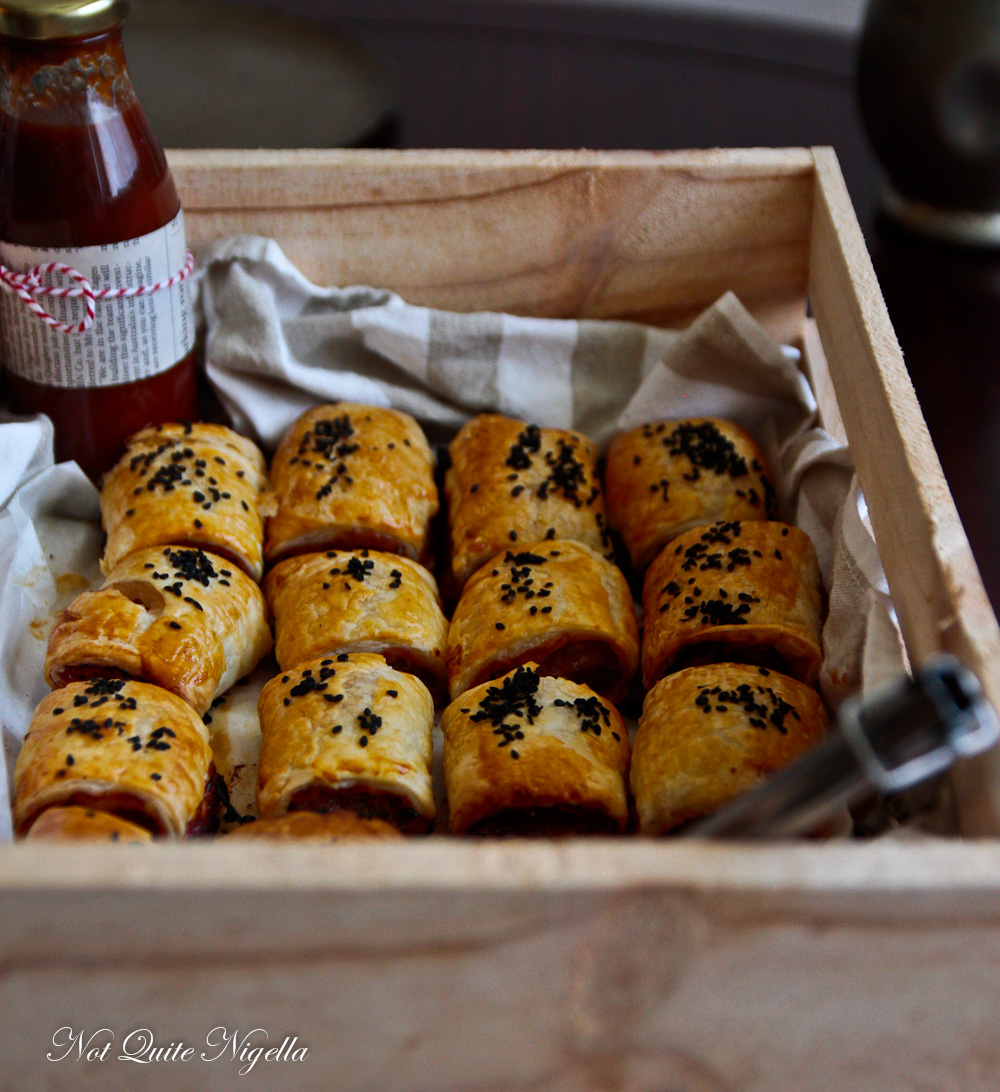 Step 1 - Preheat oven to 200C/400F. Remove the pastry from the freezer to allow to thaw (best to thaw the pastry in the fridge if the weather is very hot). Line two large baking trays with parchment. 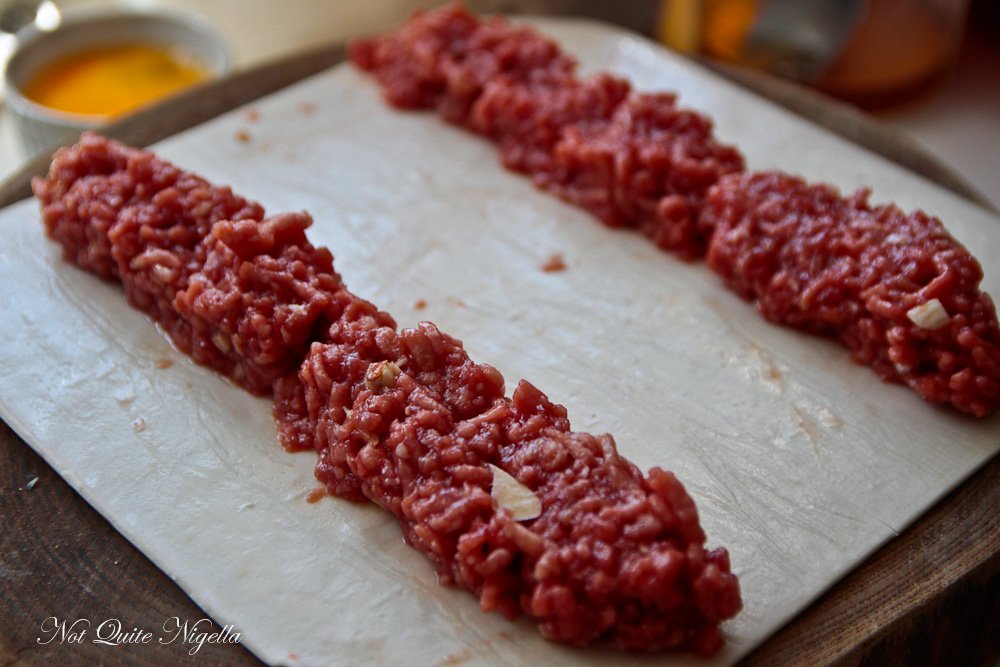 Step 2 - Cut the pastry in half vertically. Mix the pork mince, char siu sauce, salt, sugar, garlic and honey in a bowl ensuring that the flavours are evenly distributed. I do this while wearing latex gloves -you can use a spatula of course. Shape the mince into long log shapes and place in the centre of the pastry. Brush the edges with the beaten egg and fold over and press down gently to seal the edges. 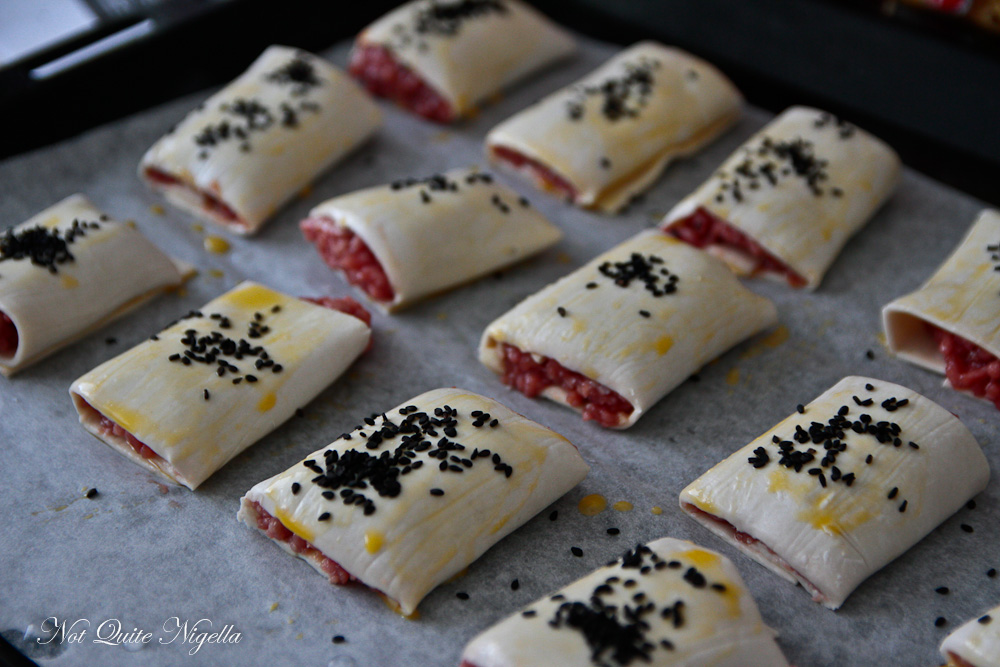 Step 3 - Sprinkle with a mixture of black and white sesame seeds and bake for 20-25 minutes until the pastry is golden.