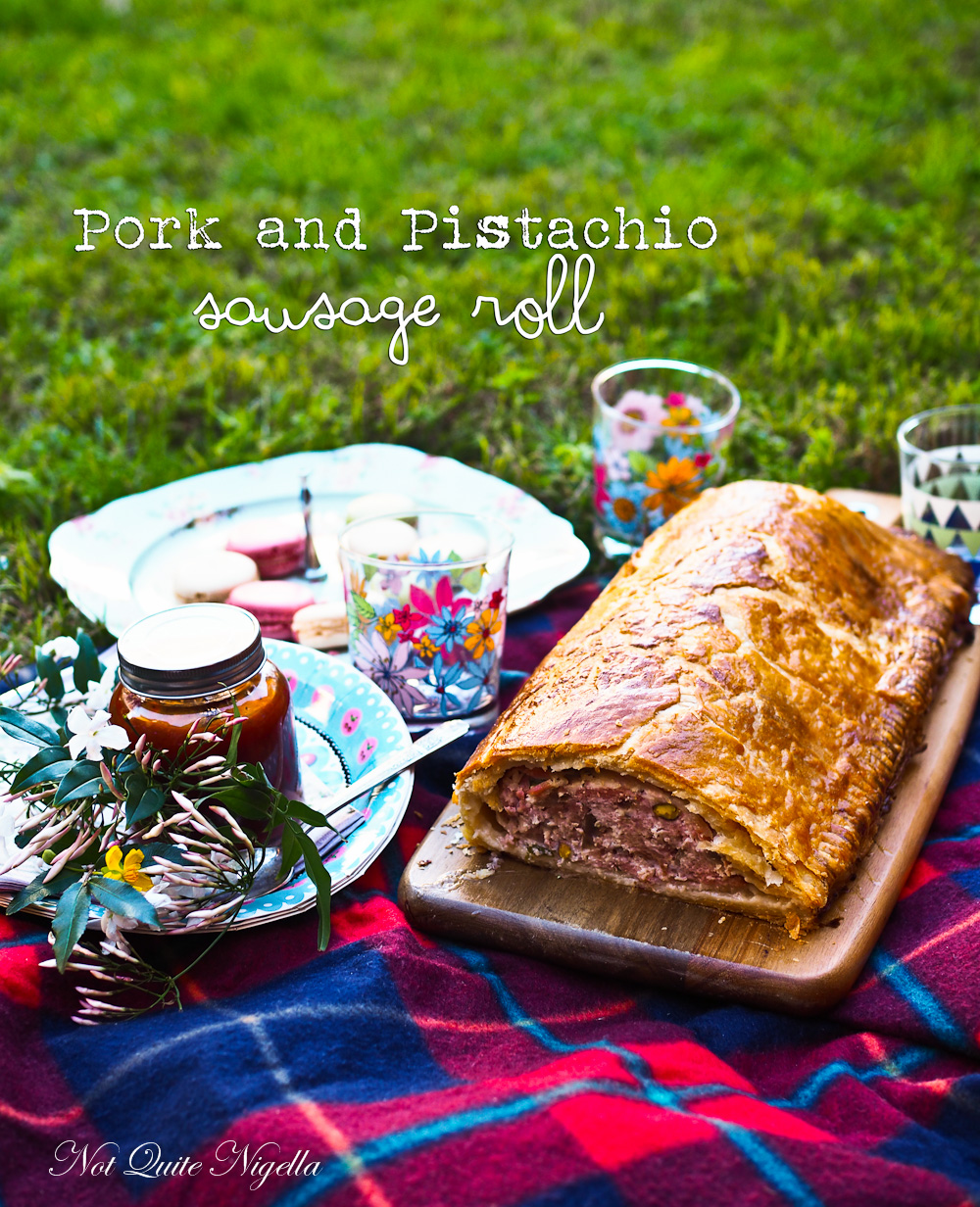 This pork and pistachio sausage roll is a little bit special Dear Reader. It's partly a pork and pistachio terrine and partly a sausage roll. With a buttery home made puff pastry and brandy caramelised onions and seasonings, you wrap the filling in bacon and then bake it. To accompany it is a marmalade ketchup! It is the perfect centrepiece for Father's Day!

I'm getting super pushy here Dear Reader. If you're a fan of terrines and sausage rolls then you really have to make this. I understand if you need to buy the puff pastry too-sometimes we're just not up for that sort of palaver (I have to be in the mood to make pastry). Other than that, the prep time excluding making the puff pastry is 20 minutes. The filling is super easy and when you cut it open everyone thinks that you're a domestic goddess because it looks so good. It's also perfect for Father's Day coming up. 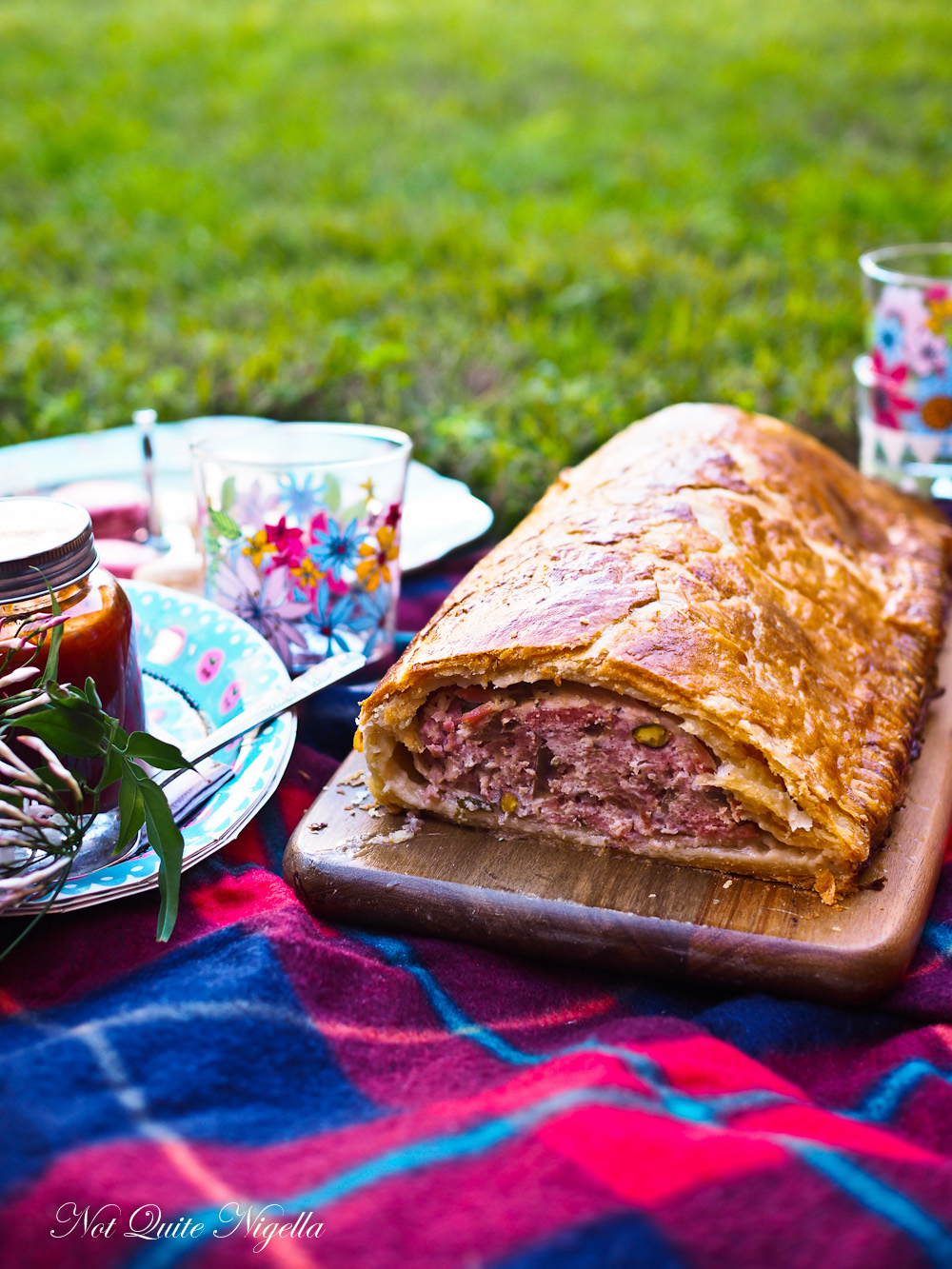 Dads are known for having a unique sense of humour. Mine occasionally smirks at a joke but has never laughed out loud at anything. And then there's Mr NQN's father. His greatest fantasy has always been to have a harem of women hanging onto his every word and the failure of that to materialise has been the scourge of his life. He pops in and out of his children's lives and one time he came along to a birthday party of mine. He was seated next to my friend Queen Viv who regarded him with curiosity.

She tried to engage him in conversation about his children i.e. Mr NQN, his brother and two sisters. She then remarked about the strong resemblance between Mr NQN and his father. The other children are blonde and blue eyed but Mr NQN inherited his father's dark hair and eyes.

Roger said, "At least I know that he's mine!" and added, "You know, I'm not sure the other ones are mine!" he said with dead seriousness. Mr NQN's siblings were within earshot-they're fairly sensitive souls and I don't think they quite got his sense of "dad humour"! Although I think his might be on the dark side.

So tell me Dear Reader, do you enjoy dad humour? Will you be doing or serving up anything special this Father's Day? How often do you make puff pastry or do you put it in the "too hard" basket? 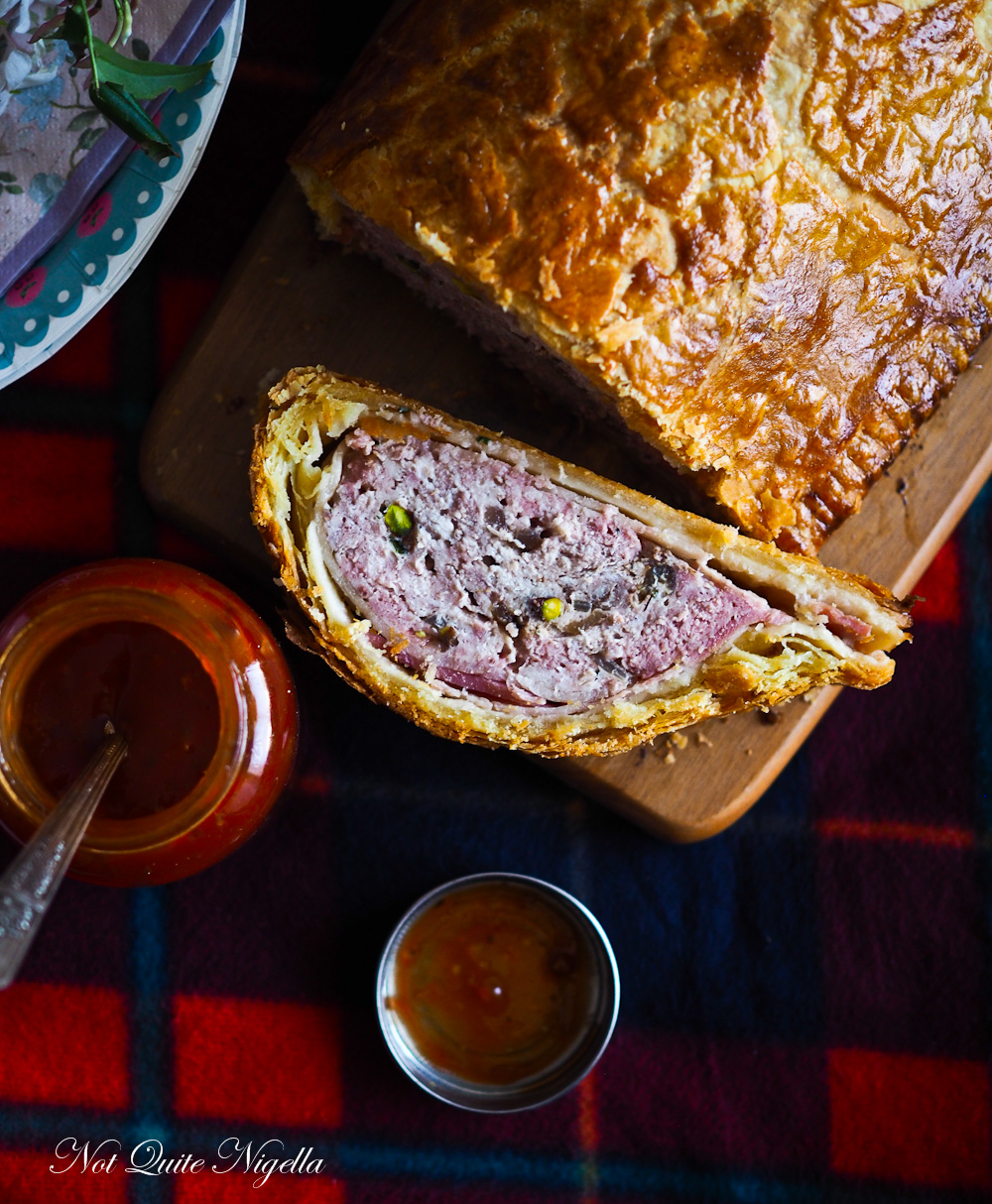 Step 1 - In a stand mixer fitted with a dough hook, mix the melted butter, flour, salt and water until starting to come together. Then add the butter cubes and knead for a minute.

Step 2 - Remove from the bowl and place on a floured surface. Shape into a rectangle (roughly) and roll out using flour to stop the pin and dough sticking. Roll out to as large a rectangle as you can and then fold it into threes, like a business envelope. Repeat three times, you should be able to do that before the butter leaks too much or the dough gets too tough. Wrap in cling film and place in the fridge for an hour.

Step 3 - While the pastry is chilling, make the filling. Saute the onions and garlic in some oil until soft. Add the thyme and the brandy and cook for a further minute. Remove from heat and allow to cool. In a large bowl mix the minces, parsley, pistachios, brandy, allspice, salt, pepper and sugar. 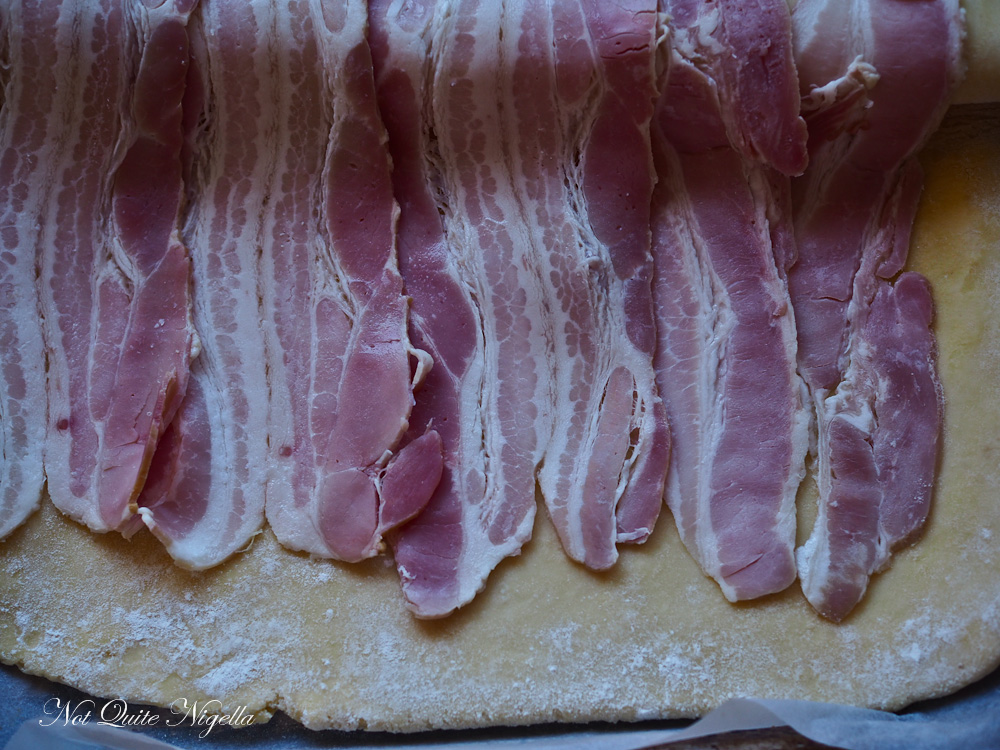 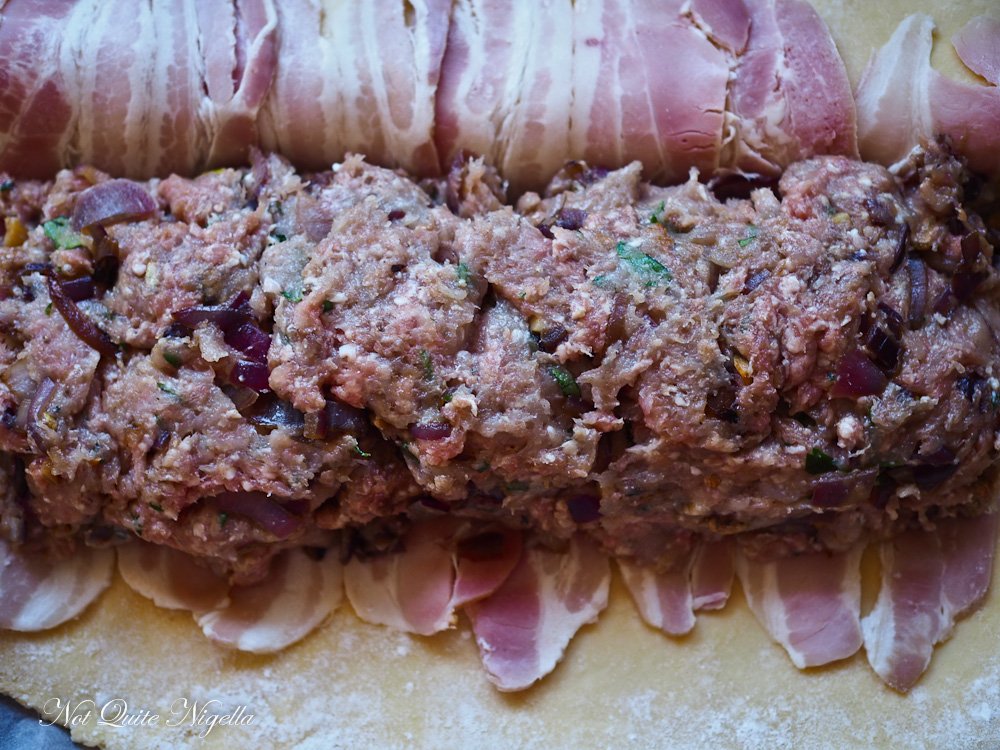 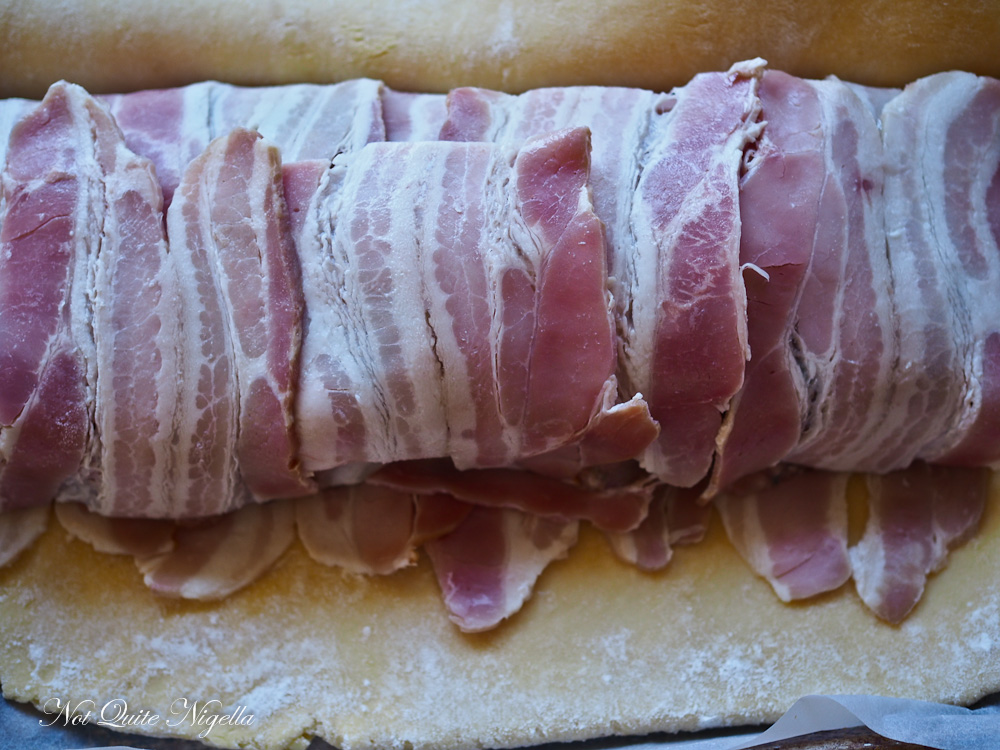 Step 4 - Roll out the pastry to a large rectangle around 35 x 40cms. Lay streaky bacon across the pastry (you may need 1.5 rashers to get all around it) and then shape the mince mixture into a log on top of it. Use some of the egg yolk glaze to seal the edges and then use the tines of a fork to firmly seal. Brush with glaze and then place in the fridge for 30 minutes. 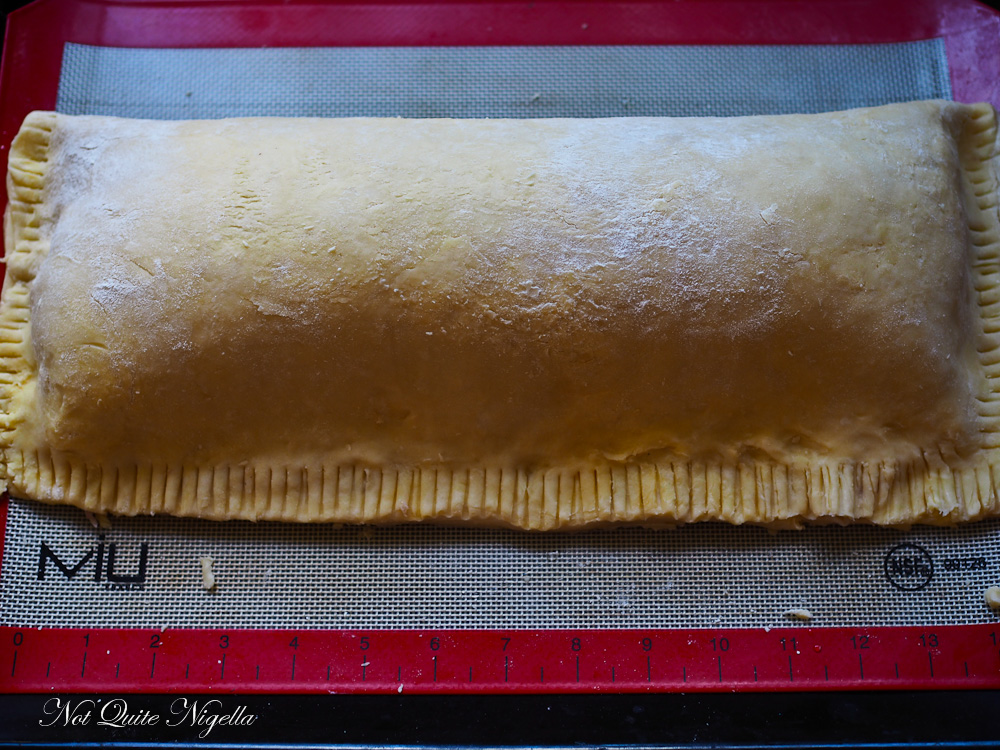 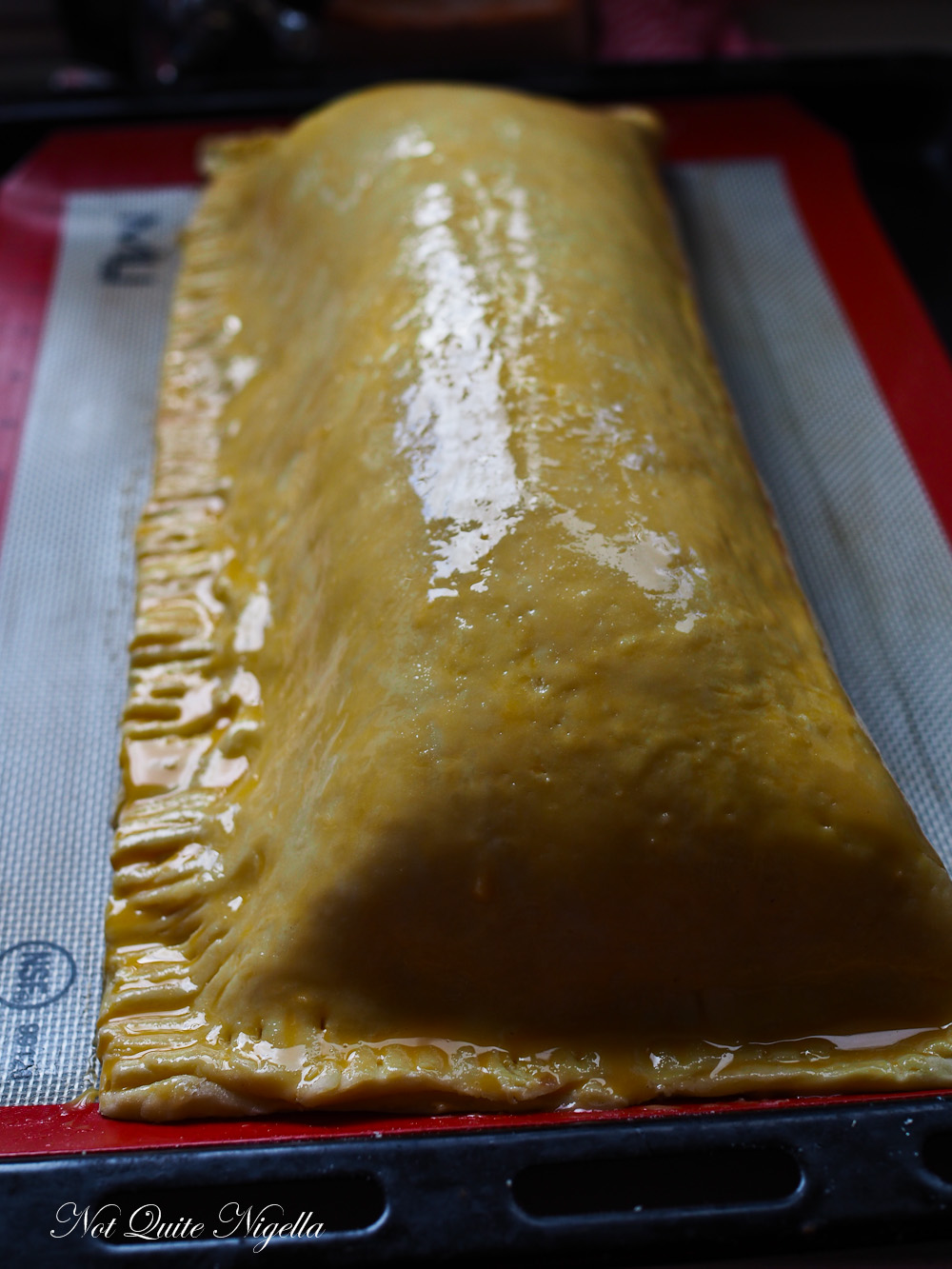