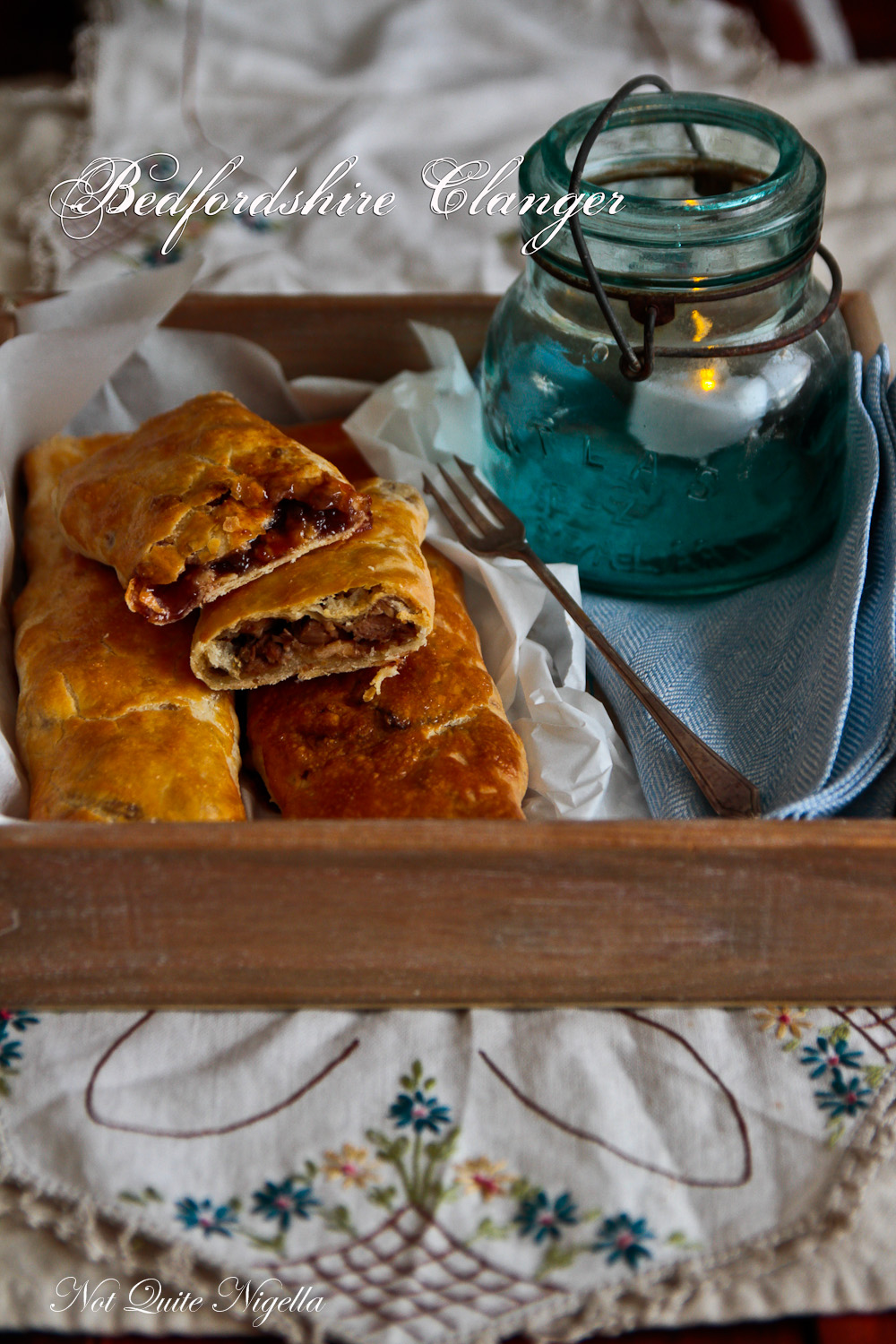 The Bedforshire Clanger is a clever pastry and lunchbox idea that has a savoury filling at one end and a sweet one at the other. It was originally designed as a filling, easy to transport lunch for farm labourers. The gorgeous buttery suet pastry is wonderfully short and crumbly and has roast pork in one end and a plum jam in the other.

They say that you never change a person, that their habits are as ingrained as their DNA but Mr NQN surprised me the other day. He had just had his haircut by my dear friend @maxbrennerswife and I picked him up after his new haircut.

"She put some stuff in my hair!" he said wide eyed. This is the man who refuses to use conditioner because he thinks that it's too girly or metrosexual (I know, I have no idea where he picked it up from, I suspect it was from the Ali G Show who joked that a guy would get killed in "da ghetto" for using conditioner). Mr NQN doesn't live in a ghetto and he isn't a gangster. But he refuses to use conditioner and as a result his hair can be fluffy when freshly washed.

"Are you ok?" I asked him jokingly.

"Yeah it made my hair...nicer," he said. Then he paused and thought about it. "If you wanted to buy some of that hair stuff I won't stop you," he added. "Okay honey," I said knowing of course this was his way of asking me to buy it. I've been trying to persuade him to get an undercut for a while now and I figure that if he starts using product he won't be averse to a haircut that I like. His main protest at getting an undercut was using product.

As it was time for me to leave on an overseas trip I thought that I would make Mr NQN something to eat and stash in the freezer. He usually gets a batch of sausage rolls but this time I thought I'd make a distant cousin of them. A distant English cousin to be precise. The Bedfordshire Clanger. This is a pastry from Bedfordshire in England with two ends - a savoury end and a sweet end so that it is a meal in one. Originally it was invented by wives for their farm labourer husbands as a lunch time meal in one with a main and dessert in the one pastry. 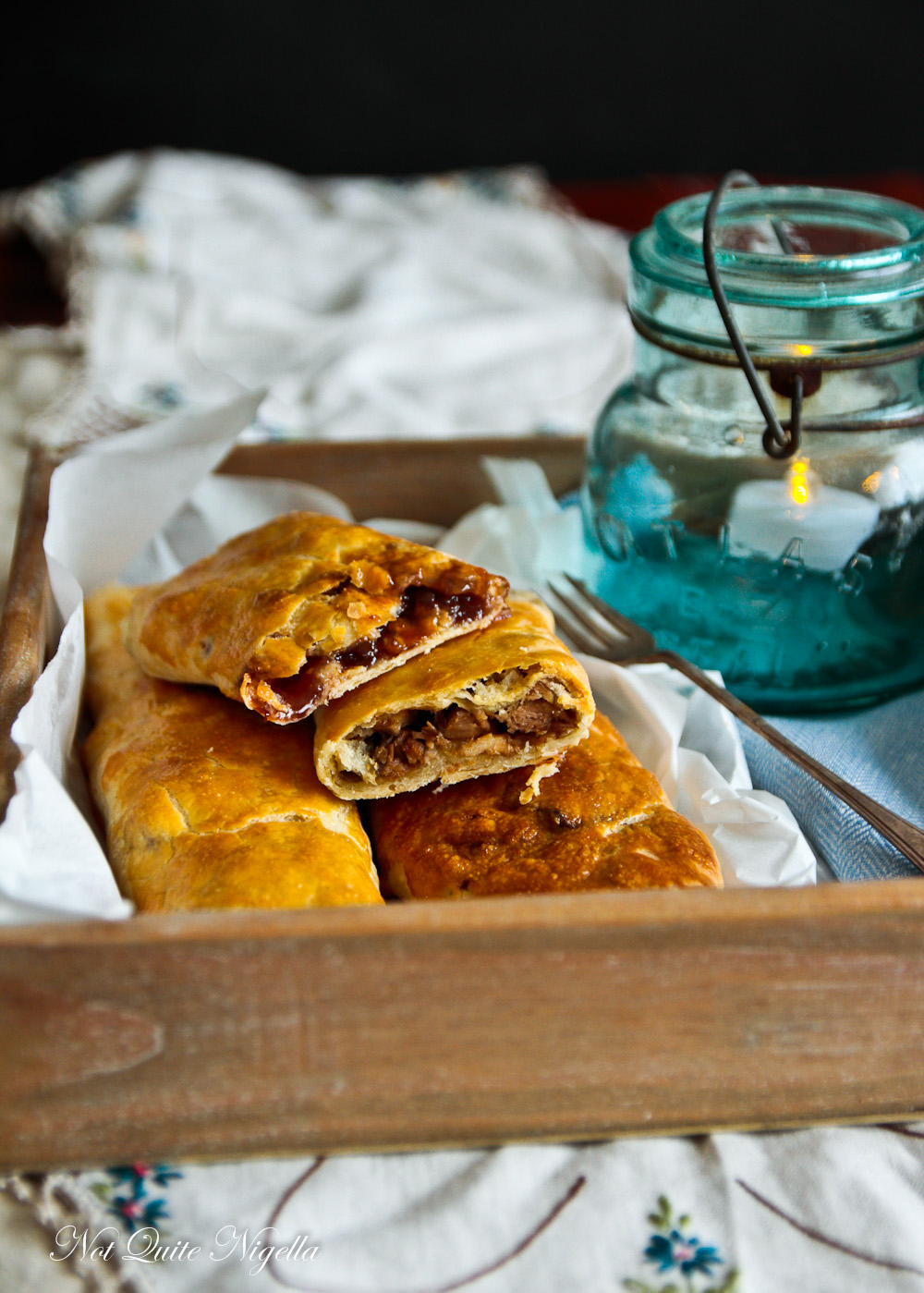 The pastry is a suet pastry which is so wonderfully short and delicious when served warm. It crumbles in a way that butter doesn't but I also added some butter to the pastry for flavour. The savoury end is usually meat of any type with vegetables and often leftover roast was used. The sweet end is usually jam and I had that in spades thanks to a recent jam delivery. Traditionally they were a pudding and I believe they were boiled or simmered but this version suits baking in the oven much better. They're such a delicious little treat, especially when you want something warming. I'm hoping that Mr NQN will devour these like he does sausage rolls.

I should clarify, it's not that he can't find his own food. It's just he won't and doesn't and he's a bit helpless that way. I even hate describing it as helpless, it's actually a nonchalance towards the whole blissful exercise of eating that the best way to describe it is as food apathy. He subsists on packet pasta and sauce. I don't understand it and I can't change it, it's the way that he is. But then again, he has started using product so who knows, maybe he will change his attitude towards food!

So tell me Dear Reader, do you think that people can change? Have you ever tried one of these pastries before? Which meat would you use and which jam for your favourite combo? And do you warm your pastries before eating them?

Preparation time: 10 minutes plus 1 hour resting plus 20 minute putting together 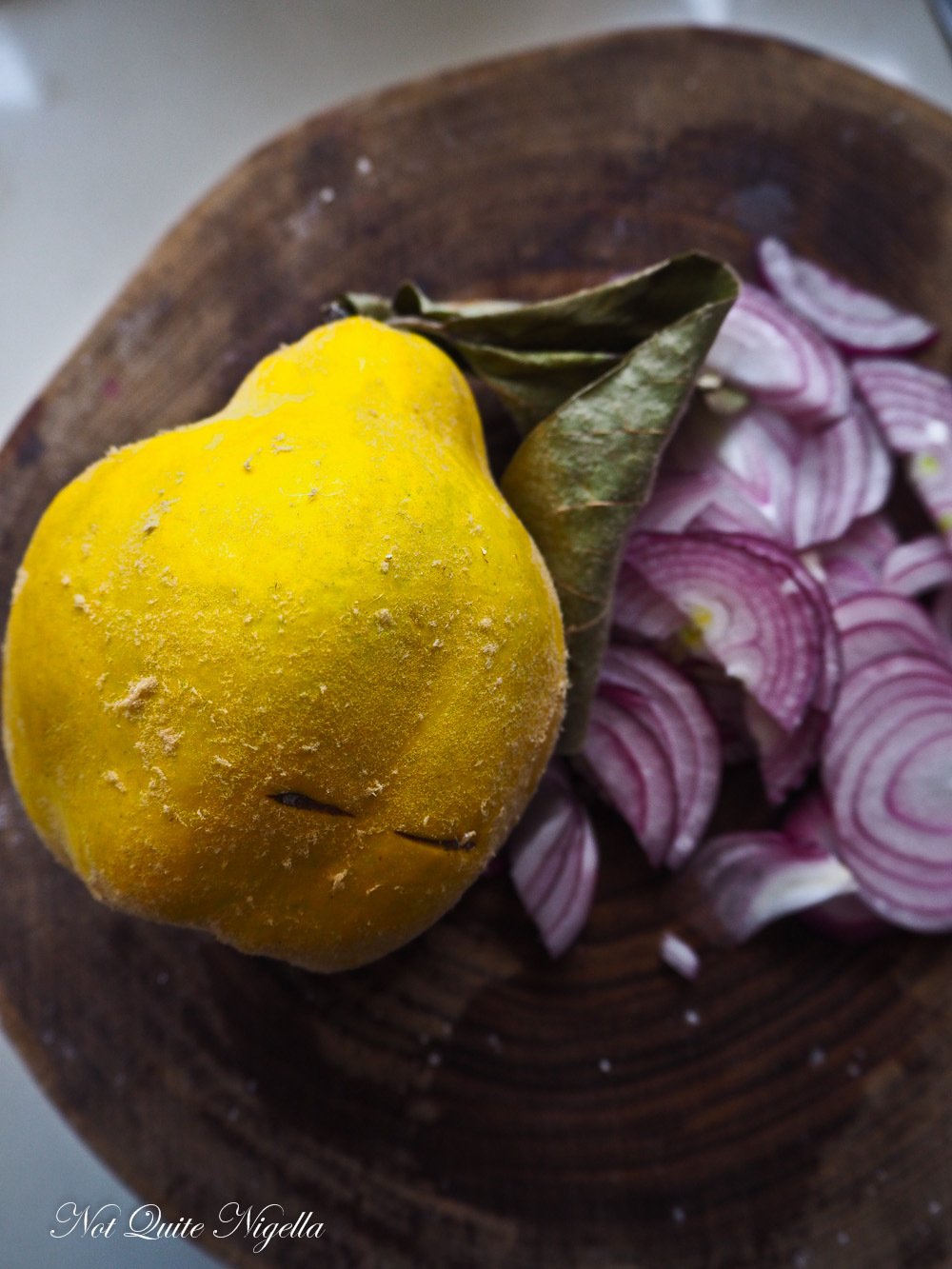 Step 1 - Firstly make the filling as it needs to cool completely. Fry the onion in 1-2 tablespoons of oil and then add the quince and apples and cider. Cook until starting to get soft. Add the roast pork and season with salt and pepper. Set aside to cool completely 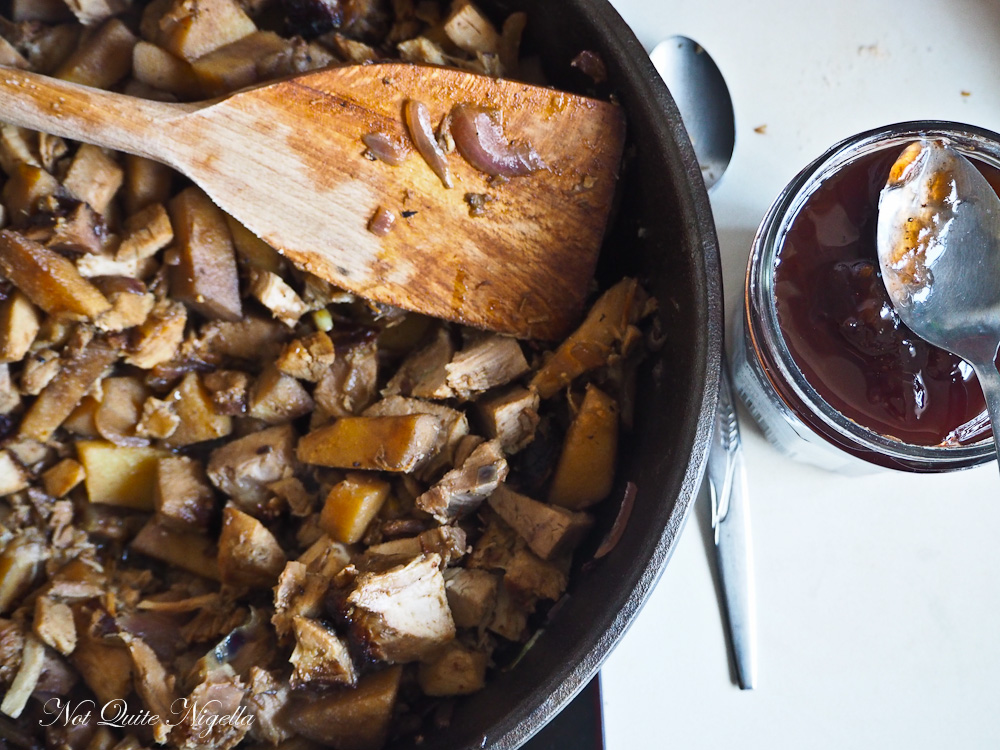 Step 2 - Make the pastry. Finely process the suet first along with the butter so that it ends up in tiny little pieces. Add the flour and salt and one egg (the other egg with be used to glaze). Then pulse and then slowly add the ice water until it just comes together. Shape into three balls and wrap in cling film and place in fridge for 1 hour. 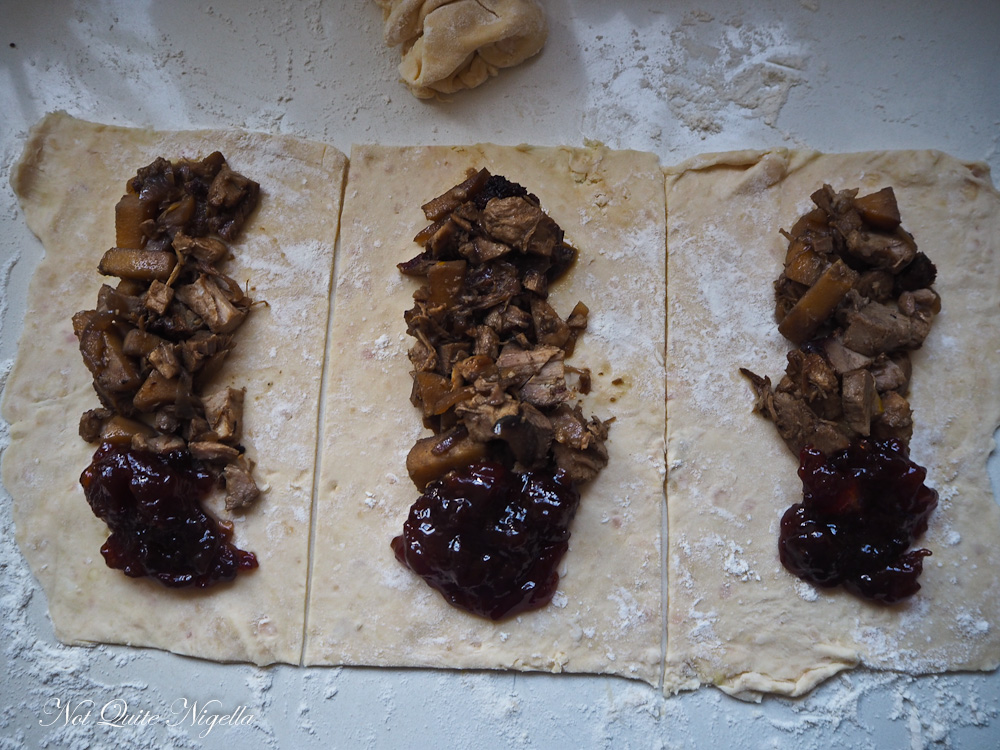 Step 3 - Preheat oven to 225C/437F and line three baking trays with parchment. Roll out one of the balls of dough until thin but not too thin, you don't want it to break. Trim the edges to form a rectangle and divide the dough into three pieces with a knife. Fill the centre with the pork about thee quarters of the way down with the pork filling and then add a tablespoon of the jam at the bottom. 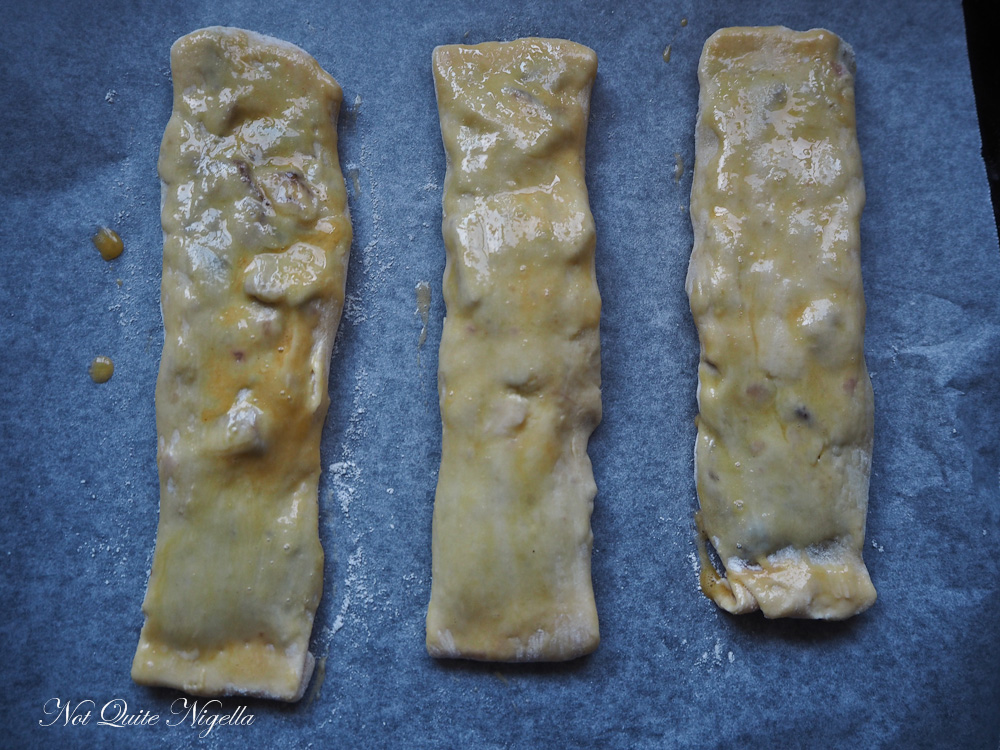 Step 4 - Beat the egg in a small bowl and brush the pastry around the edge with the egg and roll up and seal well. Carefully transfer the clanger to a baking tray and lay seam side down. Repeat with the rest of the pastry. Brush all of the generously with the egg wash. Bake at 225C/437F for 15 minutes and then reduce heat to 170C/338F and bake for 15 minutes. Serve warm.