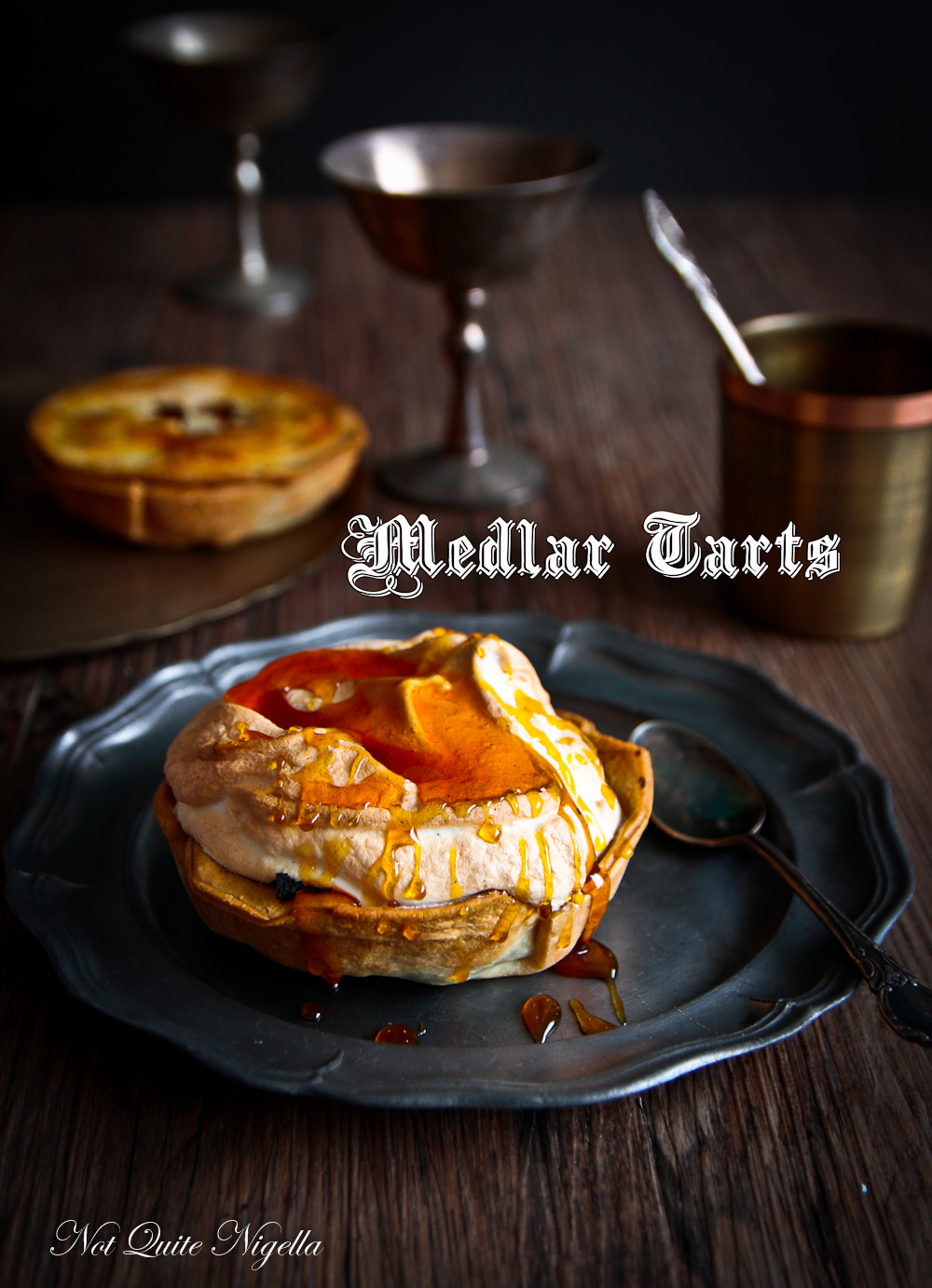 "What is a medlar?" you may ask. It's understandable if you haven't seen or cooked with this interesting fruit that has been cultivated in the Roman and Medieval times. In fact if you know your Shakespeare well you may have spotted Medlars mentioned in his prose. Find out why medlars are a fascinating Winter fruit formerly called "open arse" and what you can do with them!

Just this past Monday we returned from a vacation. It started with a seven day media trip in Thailand followed by a 10 day holiday where Mr NQN joined me. The idea behind the 10 day holiday was that it would be restful unlike most media trips which can be very busy and full of activity. And one day during this media trip was full of action. Monkey action. 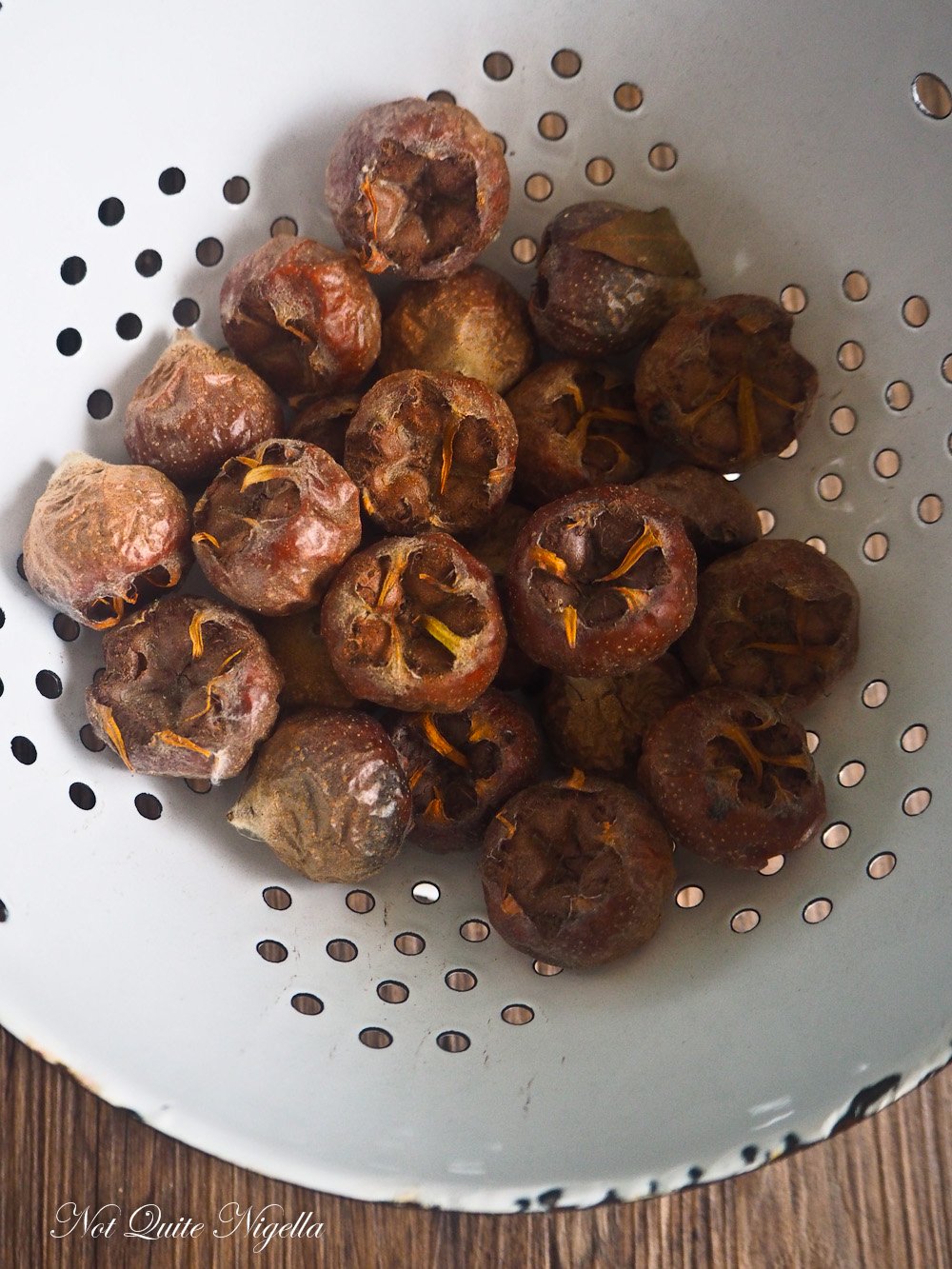 We were island hopping around Phi Phi island and the boat approached Monkey Beach where a colony of Long-Tailed Macaque Monkeys live. We were warned that sometimes you would turn up and there would be no sign of them. Not for us though as they were out in full force that day. I adore monkeys but always from a distance because they are wild and extremely strong animals so when we were offered the chance to climb on shore, all of us demurred. Our reluctance was also because the night before we were told about the rabies shots that we would need if we were ever bitten - four in total and apparently the needles were enormous. 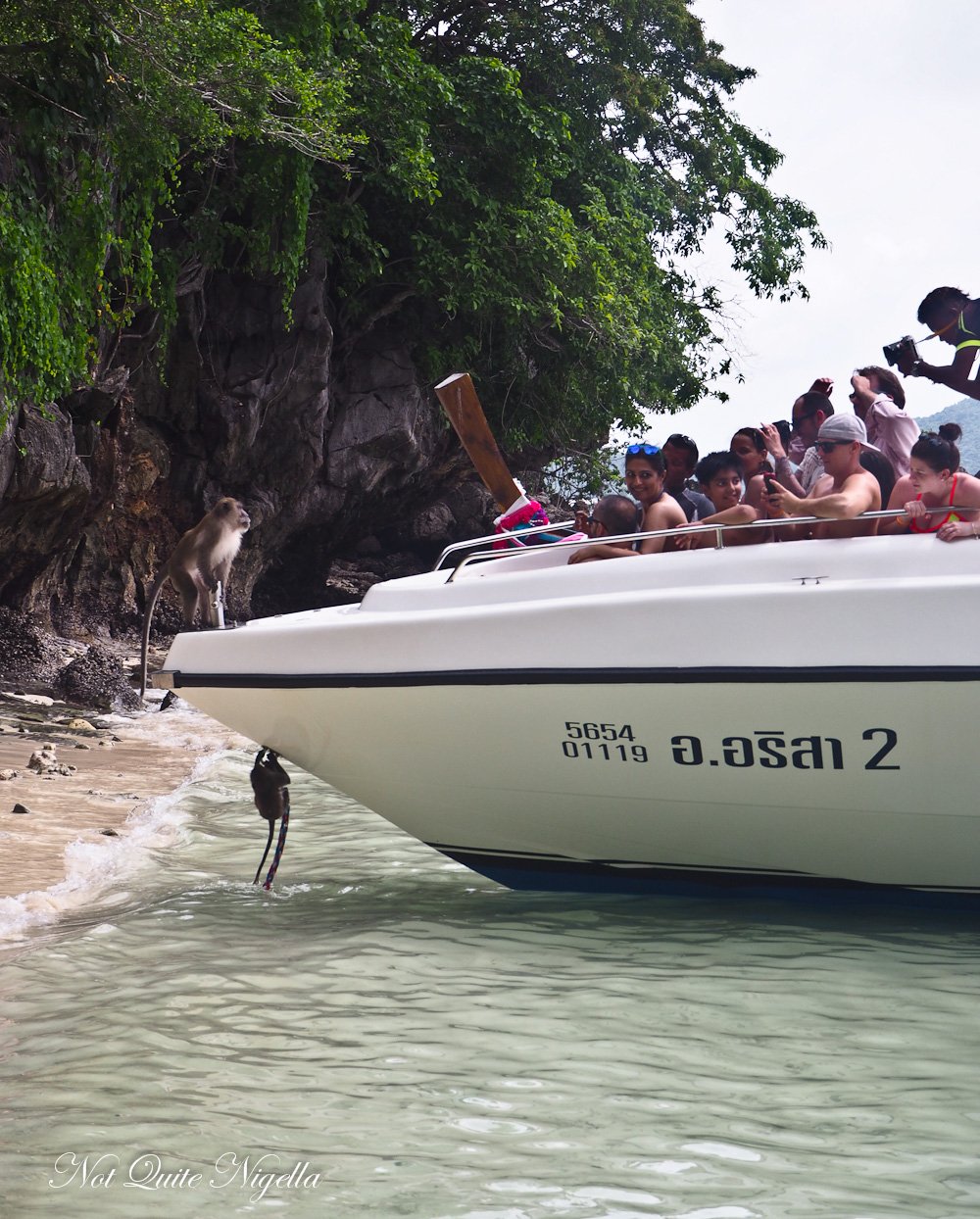 The boat next to us had a group of people standing tightly at the front. It was all very cute and I was busy taking pictures until someone on that boat brought out a piece of fruit. The monkeys got very excited and a pair of monkeys boarded their boat swiftly using a rope at the front. I started filming a Periscope video of it (it live streams whatever you filming at the time to the world) but before I knew it, two other monkeys boarded our boated with lightning speed perhaps hoping for some fruit and my lovely film of monkeys degenerated into a swearing panic fest.

"S^&! S^&! S^&*!! Oh my god! Arrrggh!!" was our reaction as we all tried to back away from the monkeys. There was a mother and her baby to the right and what looked like a large male to the left. I have always been told to never threaten a mother with a baby in the wild (not advised at any time with any species!) so the idea that she might have been feeling overly protective scared me. And then another piece of advice I told was to never to look a monkey in the eye as that is a sign of aggression. I was closest to the male monkey and I looked over at him and he at me and we looked at each other straight in the eye and all I could think of was "Oh my god, look away look away girl! You in danger!!".

They got off the boat suddenly; I think after one of the crew shooed them away (honestly I don't know it was all a blur). All of this of course was captured in live action to the world on Periscope. It was downright embarrassing and all I could say weakly was "That was not the way I pictured this video going...". When I saw the footage I collapsed with laughter afterwards but at the time it was petrifying. 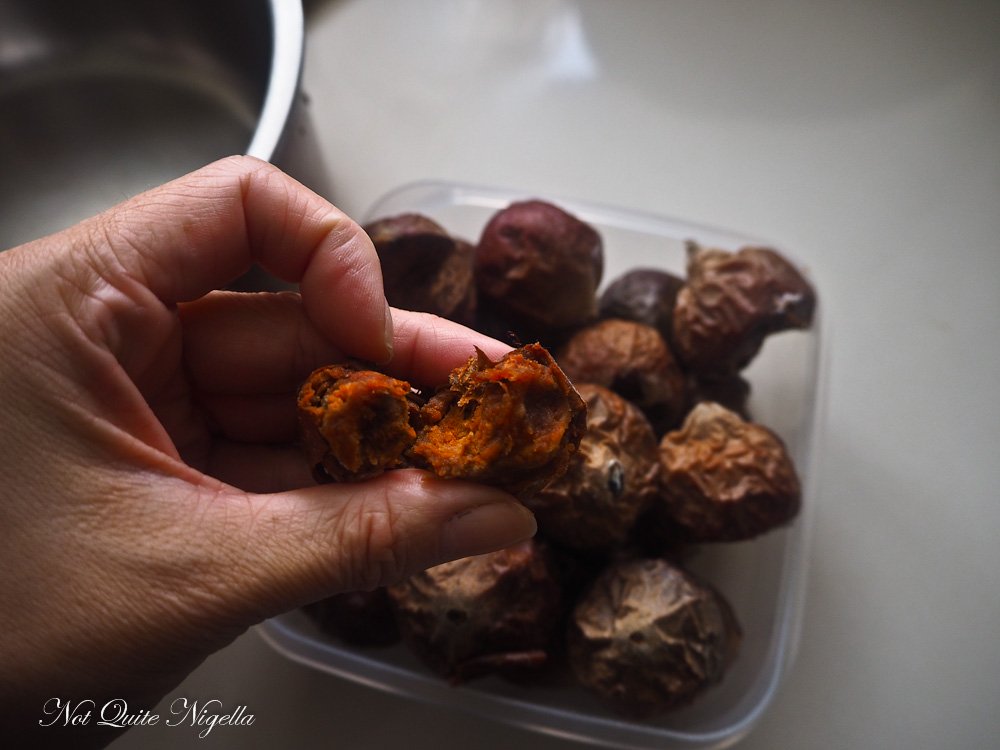 Anyway speaking of trips, sometimes you have exciting things happen but they don't involve wild animals. A couple of months ago I went to Orange and visited the Boutique Garlic farm. We were driving in farmer Dougal Munro's car when we came across a rather interesting tree laden down with fruit. Medlar fruit.

I had only heard of them in passing and never seen any of this fruit up close. Medlars are an ancient fruit variety cultivated and grown since the Roman and Medieval times that are curiously only ready in Winter. Their Medieval name was "open-arse" (I told you it was interesting!) and in France they have also been given rather unflattering description of dog's bottom or "cul de chien". 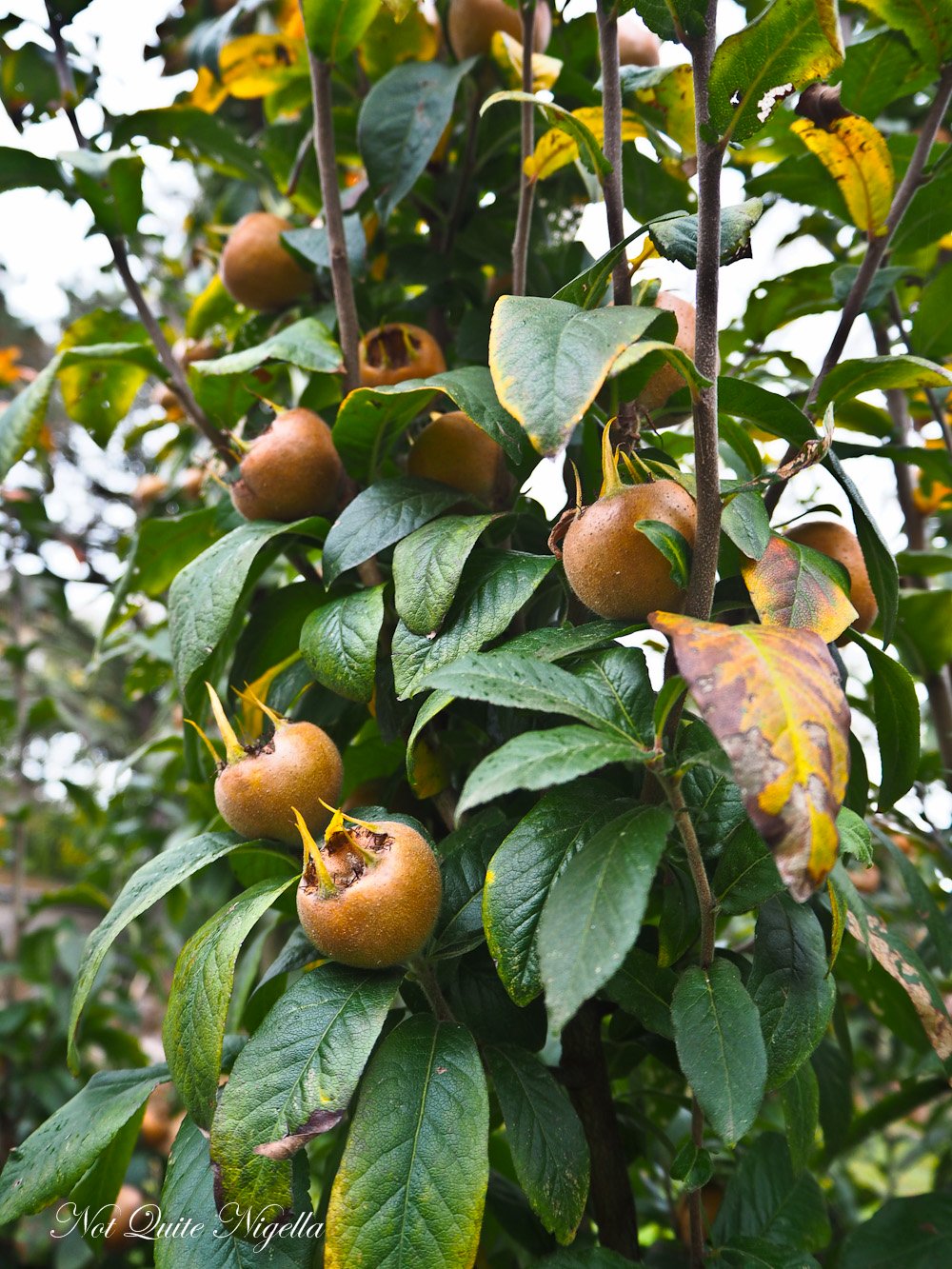 Not only that but they are really intriguing because to eat them you need to "blet" them. Which is pretty much the nice way of saying that you need them to become soft and rotten first. You can probably see why I found this fruit so fascinating. It is also a fruit that has been referenced in literature by Chaucer and Shakespeare. The very idea that it would be rotten before it has reached its prime proved fascinating to writers and Shakespeare made several references to the fruit in various works, most notably in Romeo and Juliet.

Dougal handed me some medlars freshly plucked from his tree with bletting instructions which just require time more than anything else. While they bletted I decided on their fate and ended up wanting to make a medlar tart for no other reason than pastry. I ended up loosely using a recipe from Robert May's book "The Accomplisht Cook" first published in 1660. They took their sweet time bletting and did so at different rates (see note below) and by the time I was back from Thailand they were ready. 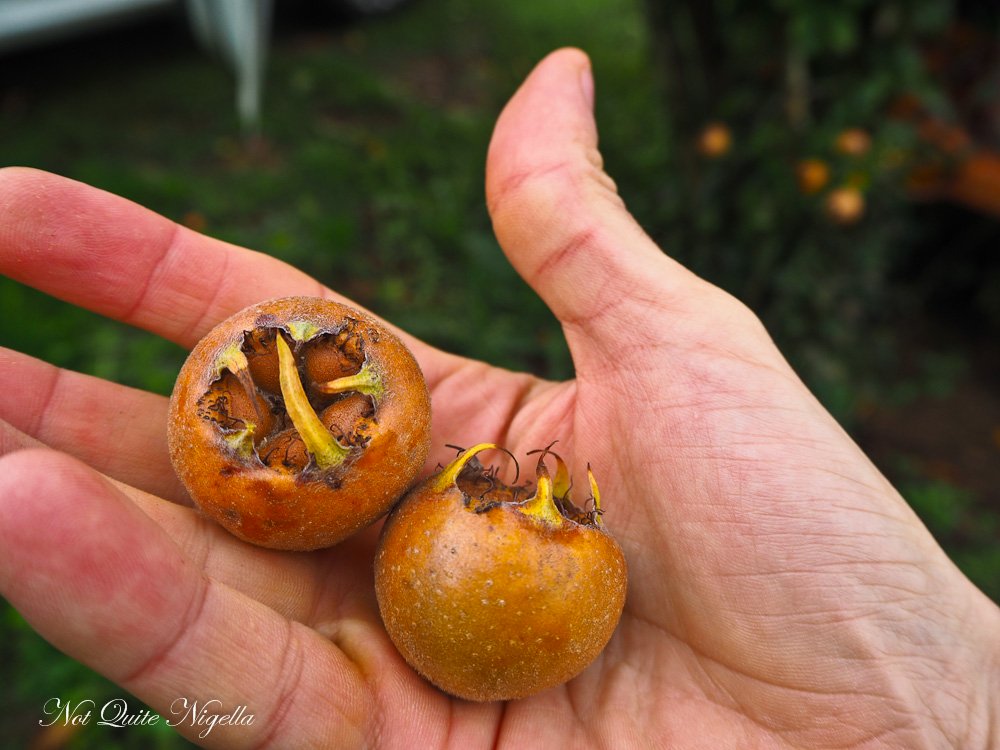 I cooked them down into a sweet filling. The texture was like a soft apple sauce. It was tart though so I added some sugar and spices but it was only when I added vanilla that it all came together. As I had some egg whites leftover I decided to keep the filling tartish much like a lemon meringue pie and add a sweet vanilla meringue topping on top. I crossed my fingers and hoped for the best.

It was a huge relief after I sank a fork into the tart. The pastry was crisp, the filling was aromatic and slightly tart and the cloud of vanilla meringue was sweet. The medlar is indeed a fascinating fruit but also a rather delicious one. If you ever see these on trees or at the market I urge you to delve into some bletting!

So tell me Dear Reader, have you ever seen or eaten a medlar before? Had you read about them in books? Are you terrified of monkeys or any other animals? I have to admit I'm a bit scared of big dogs too! 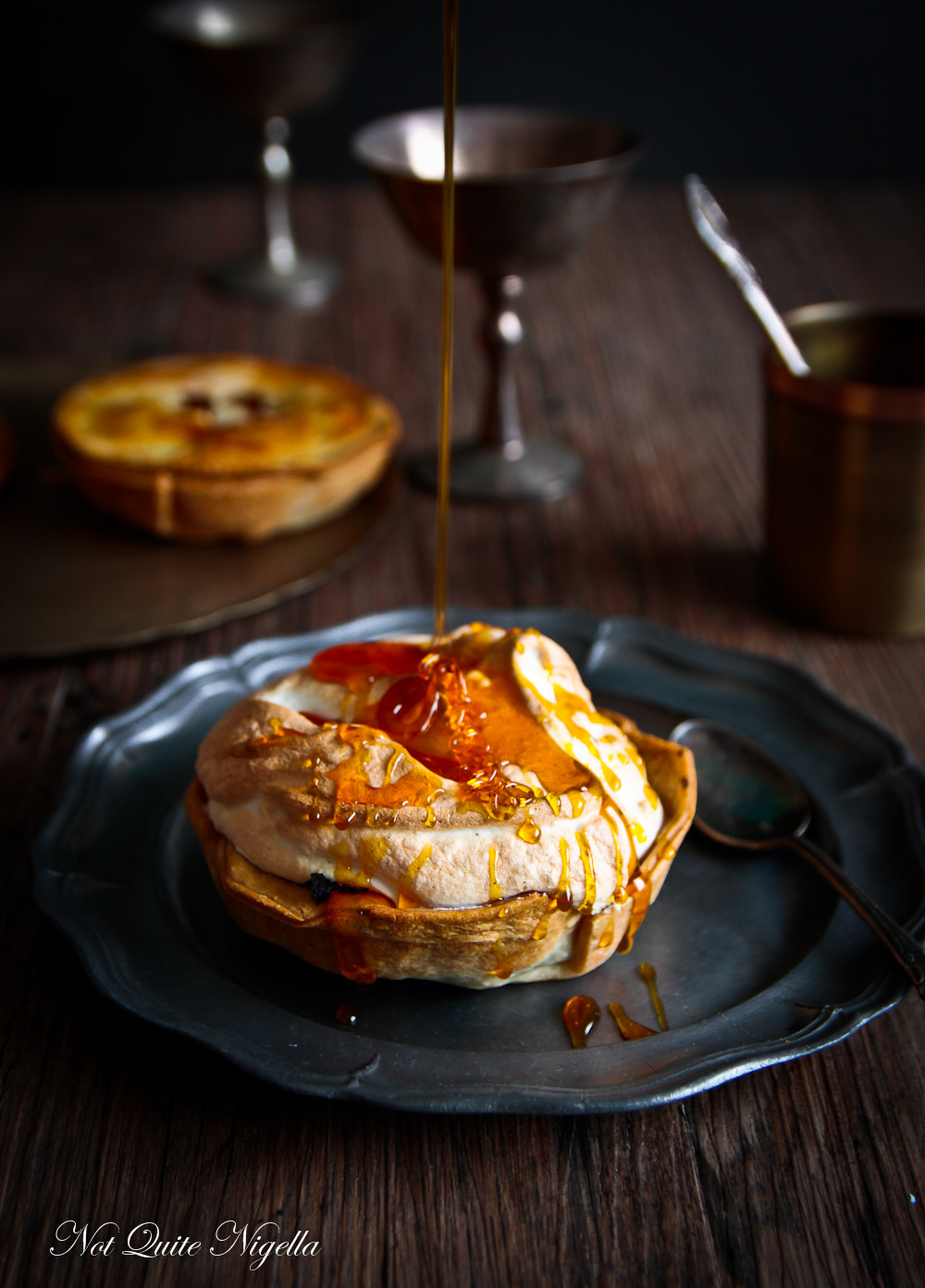 *To blet medlars, one method is to place them into a brown paper bag for 1-2 weeks. Some medlars blet faster than others so after 6 days check to see if they have turned soft and mushy and remove these from the bag and place in the fridge. Keep checking every few days for ripe ones. Store the bletted medlars in the fridge until they are all ready. The site above actually suggests leaving them outside during Winter in a box to blet. 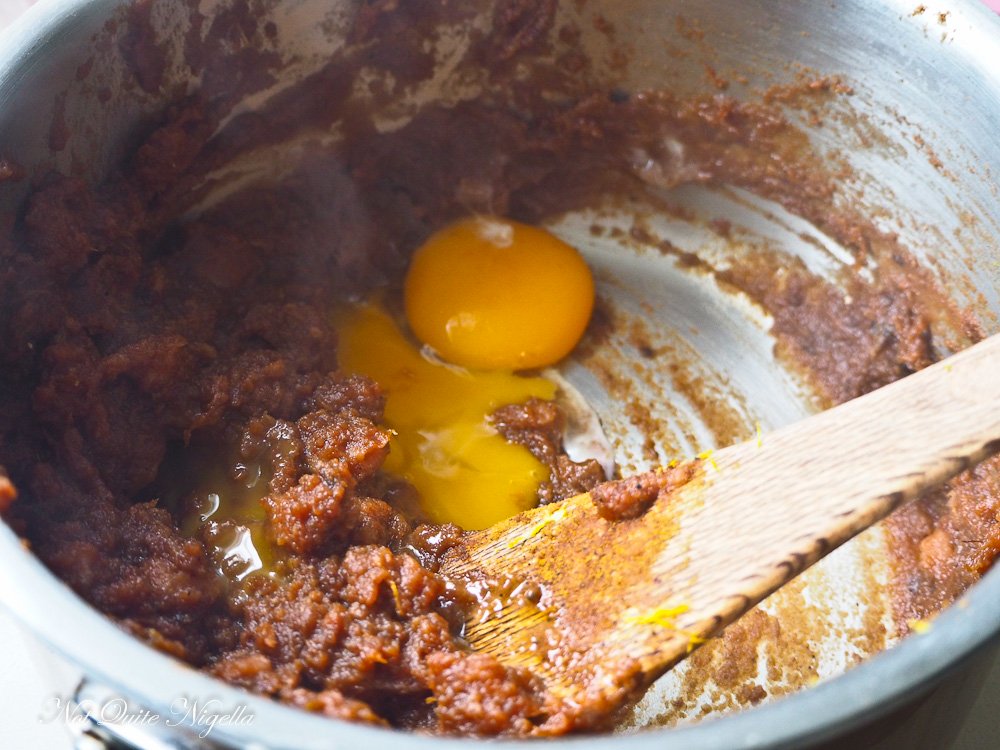 Step 1 - Peel and pit the medlars. Medlars have pips the size of cherry pits in the centre. Discard any that have turned hard or black. Place the medlars in a saucepan with the water, 5 tablespoons sugar, spices and lemon zest and simmer for 8-10 minutes on medium heat. Add the egg yolks and cook through for a couple of minutes on low heat. Cool. 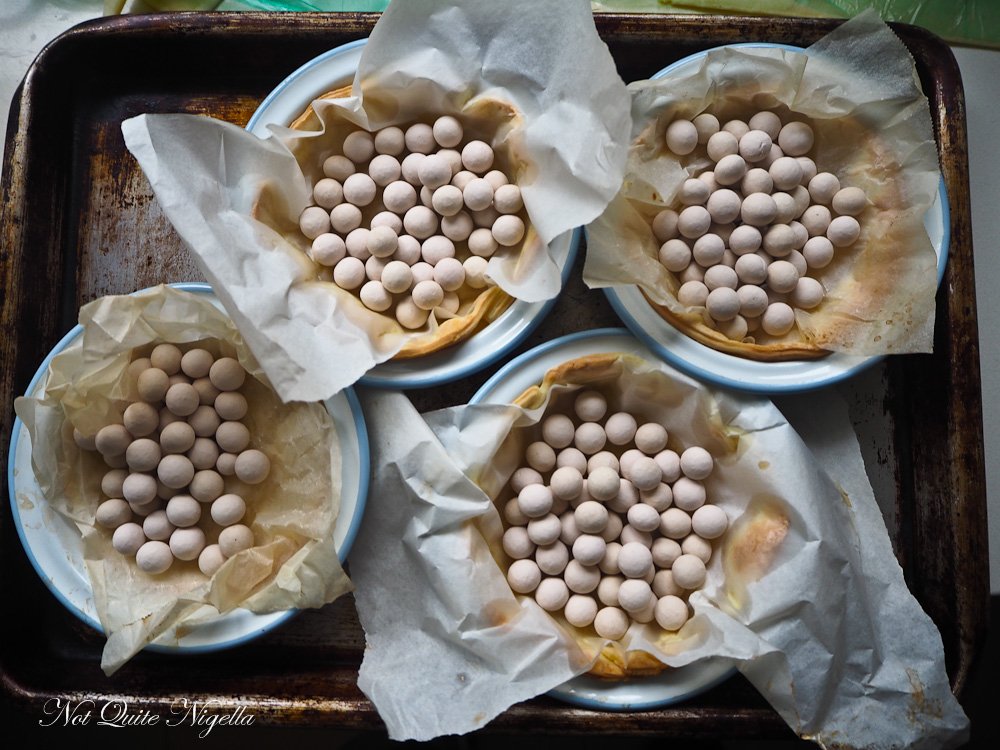 Step 2 - While they are cooling, make the pastry (you could also just serve these in cups topped with meringue if you don't want to make the pastry). Preheat oven to 220C/440F. Cut out pastry and place in four single serve size tins and weigh down with ceramic weights (uncooked rice or dried beans also works). Bake for 15 minutes. Once done carefully remove the baking weights. Spoon the medlar filling in and bake for another 15 minutes. 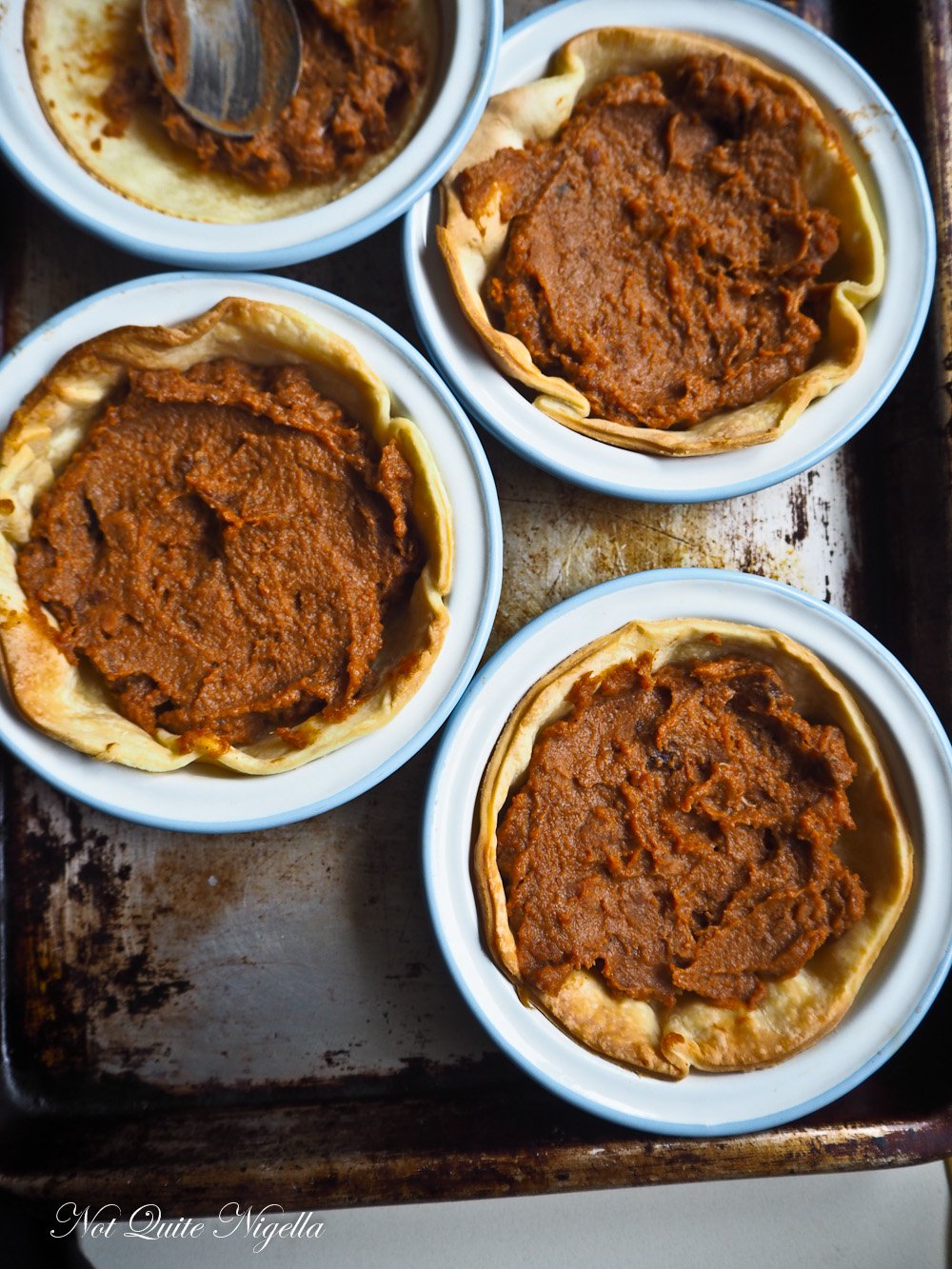 Step 3 - Remove the tarts from the oven and turn up the oven to 250C/482F. Whip the egg whites in a clean bowl fitted with a whisk. Add the 1/2 cup sugar gradually and then add vanilla and beat until the meringue becomes glossy and doesn't move. Spoon on top of the tarts. Bake for 5 minutes. Serve with additional honey or golden syrup.