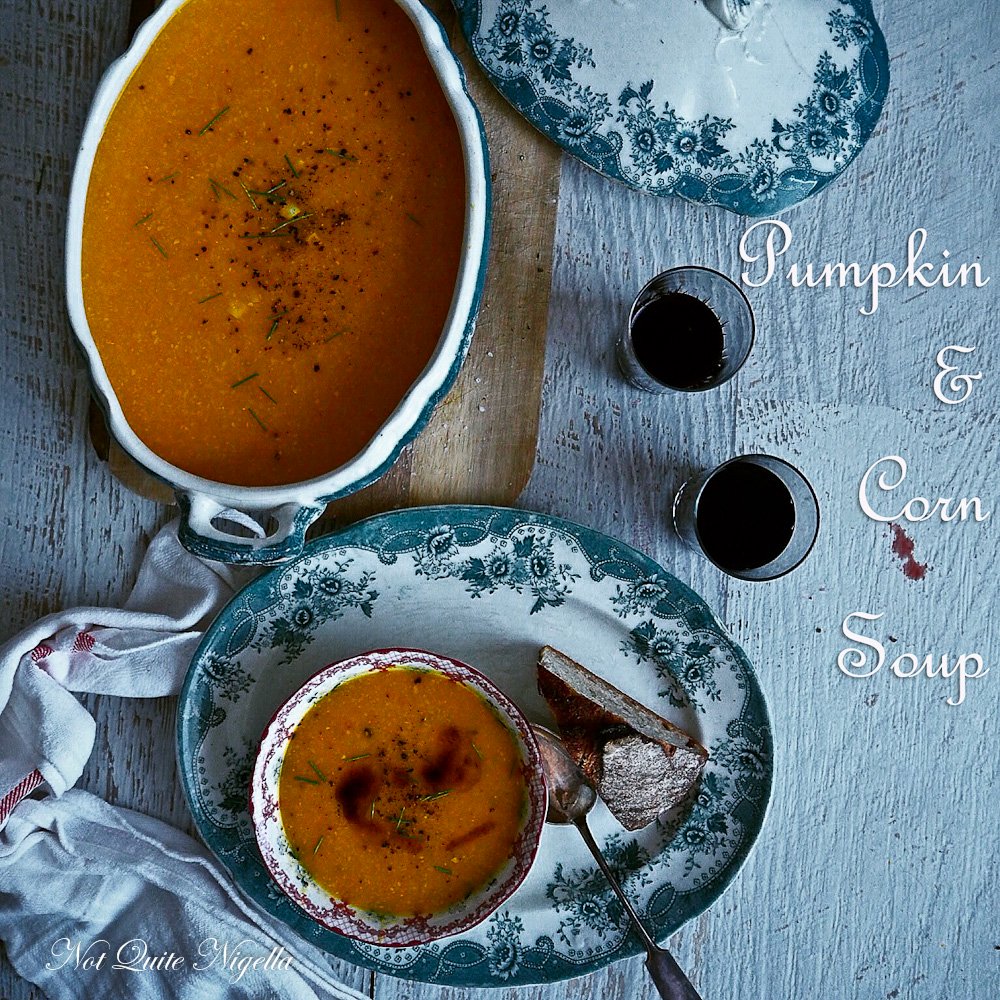 *An easy, warming soup that uses up winter vegetables? Sure! This roasted pumpkin and corn soup is given pep with curry powder and a small amount of cream. This is great as a standalone dinner or a lunch when served with bread. *

I don't know what you're like Dear Reader when you get a new hobby but when Mr NQN finds one, he throws himself head first into it with much enthusiasm and vigour. You see my lovely husband has found himself a new hobby: making youtube videos of him eating food.

I know what you're thinking. It's the same question that everyone asks and yes it is literally just him eating food. The videos go on for about 1 minute and he uses a fish eye lens so that his face is stretched to rather strange proportions and he looks quite cartoonish. I call him my own claymation figure.

Every day he comes home and checks how many views he has. One night he said, "I think the comments on youtube are broken because I haven't gotten any and so are the views." He reacts either with despondency or elation should a video "go viral" (aka 50 views). I must admit that I find them fascinating but I wasn't sure how other people would view them. Some of his friends have been stoic and polite, others have been downright blunt ("They just don't understand!" he sniffs in response). I'm delighted to say that most of my friends love them and find them funny but then again you have to like the odd things in life to enjoy my company. 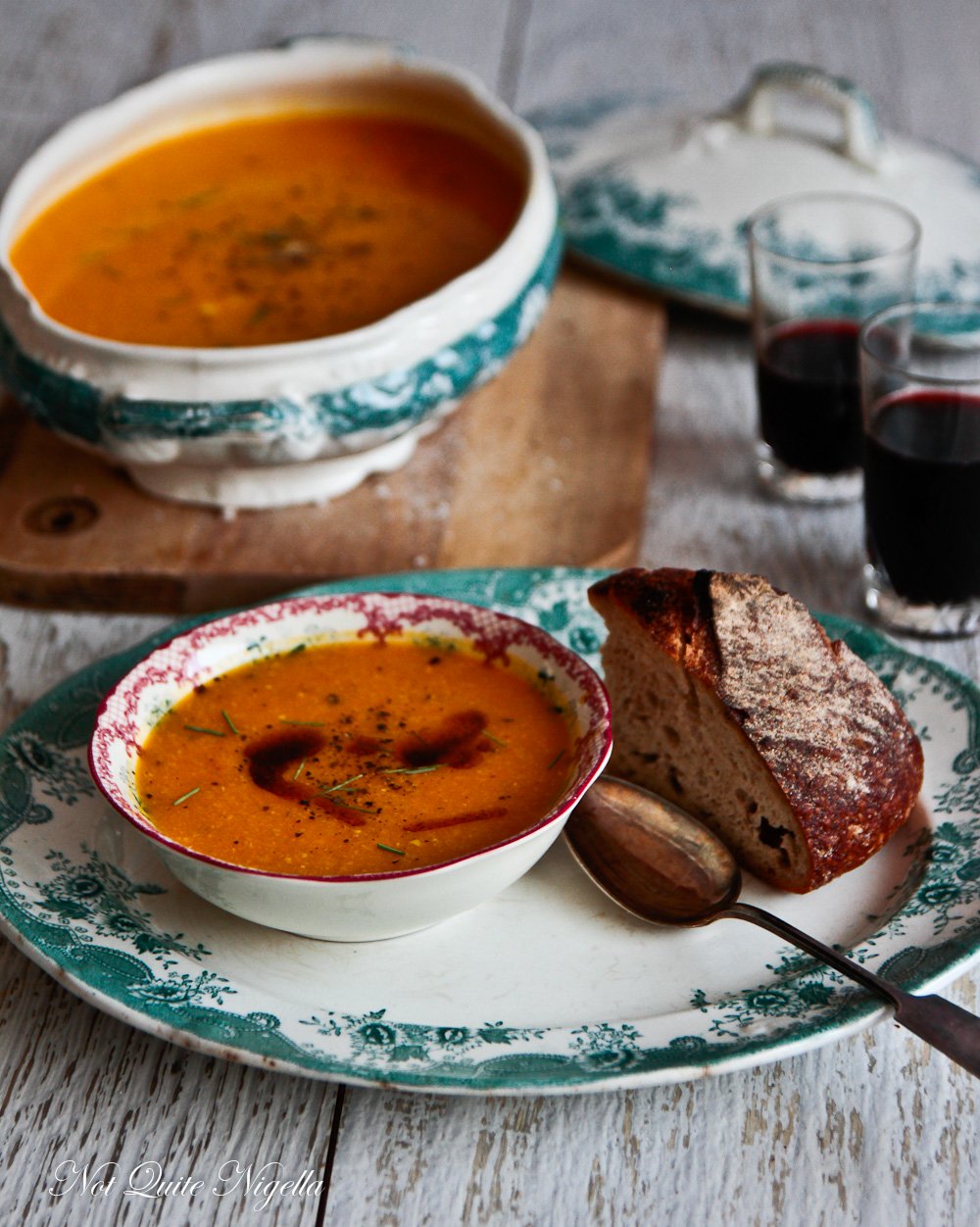 Then there was other feedback like that from Queen Viv. Over dumplings she told him that she found them fascinating and said, "It's like an Andy Warhol film! The early ones."

Miss America nodded and added, "There was one where a man was sleeping for eight hours!"

And then The Wizard passed it onto his girlfriend who said that she found the actions of him masticating "mesmerising...".

Another friend said, "I felt warm just knowing you were having soup."

That filled Mr NQN with confidence and every couple of days, he will announce:

Now he approaches meals with giddy excitement setting up the camera and eating food quickly and enthusiastically. Even super simple dishes like this soup. I almost didn't put this soup up it was too simple and honestly made up one evening when I needed to use a pumpkin that fell behind the bowl. Yep that sort of thing happens a lot in my kitchen.

It's a pumpkin and corn shop where i bake the pumpkin the easiest way I know - whole in the oven with skin on. I learned that trick from Tuulikki years ago and it is the only way I cook pumpkin. Originally I made some sweet potato dumplings to go in it but they didn't quite work out as they were a bit heavy so I've left them out of the recipe. It also freezes well so it's for those times when you need a quick soup - or you spouse asks for soup to film his soup videos!

So tell me Dear Reader, would you watch a 1 minute video of someone eating soup? And do you prefer chunky soups or smooth ones? Do you ever eat just soup for dinner? 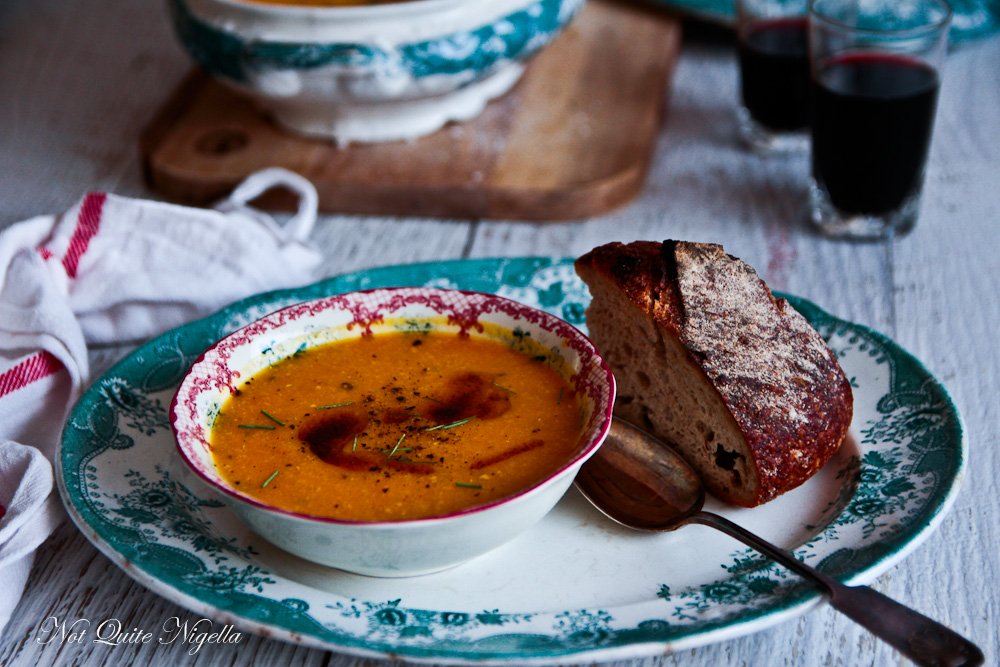 I like to think that this is an action shot. In reality it just looks blurry.

Step 1 - Place the pumpkin in a 180C/350F oven and bake until tender (I put the whole pumpkin in with skin and seeds). When ready the skin will slip off easily and the seeds will come off easily too. If you have peeled pumpkin already cut into pieces you can boil these in the stock rather than roasting the pumpkin, it's up to you.

Step 2 - Meanwhile slice the kernels of corn off the cob. Simmer the cobs and in the stock for 10 minutes and then remove the cobs. Then add the pumpkin and corn kernels and cook until done. Add curry powder to taste and add salt and pepper and cream. Blitz using an immersion or stick blender. Serve with good, buttered bread.

OR if you prefer a smoother soup with bits of corn, blitz the pumpkin and stock with the curry powder, salt, pepper and cream and then add the corn kernels and simmer for a few minutes until the corn is done. I prefer it the second way.