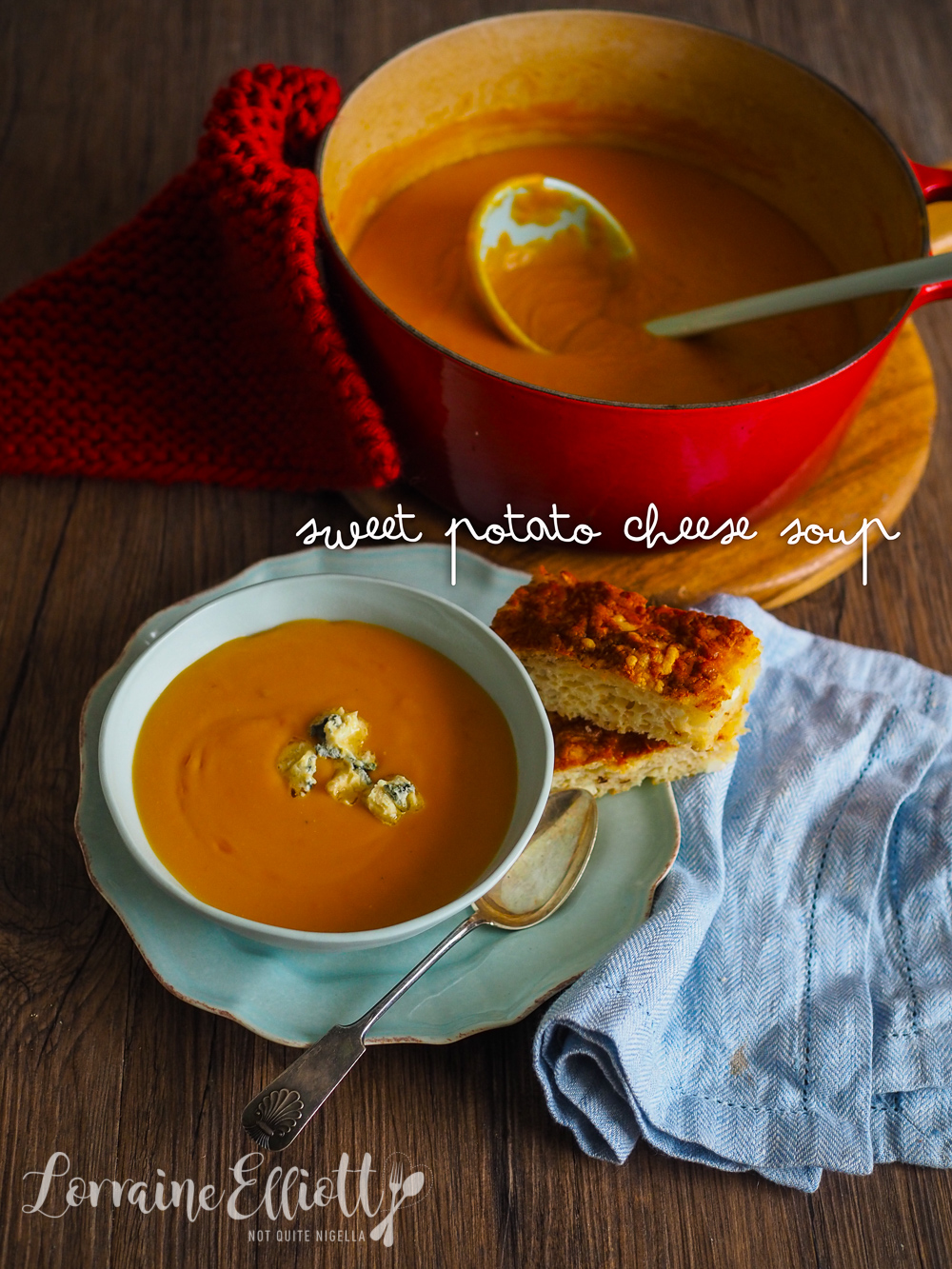 Sweet potatoes are one of the most versatile vegetables that are also ideal for quarantine as they keep for a long time. With a natural sweetness to them they lend themselves to sweet or savoury dishes easily. This sweet potato and blue cheese soup only has a few ingredients and yet is satisfyingly creamy thanks to a roux rather than adding cream!

Part of the morning glory family, sweet potatoes are only distantly related to the white potato and are native to South and Central America. They're very high in fibre and potassium and one cup of orange sweet potato with skin provides more than seven times the amount of beta-carotene for an average adult per day. Beta carotene is converted into vitamin A or retinol. Other vitamins in sweet potatoes are vitamin C, potassium, pantothenic acid (vitamin B5), niacin (vitamin B3), vitamin B6, manganese, magnesium and copper.

Did you know that you can control the sweetness of your sweet potatoes? The sugar found in sweet potatoes is maltose and this comes about when an enzyme converts the starch into maltose. That enzyme is activated around 57° to 77°C or 135°F to 170°F so if you cook them low and slow you'll intensify their sweetness.

Variation: Don't like blue cheese? Add a different cheese (or add cubes of chorizo). Want more body to your soup? Add 1/4 cup of rice to give it more body and add a cup more stock to cook that rice.

Which bread to serve with this: Soup is great with a spongey textured bread. I served this with Frojalda or Turkish cheese bread. You can also serve this up with any type of focaccia. It is also lovely with Irish Wheaten Bread (which is perfect if you don't have yeast). 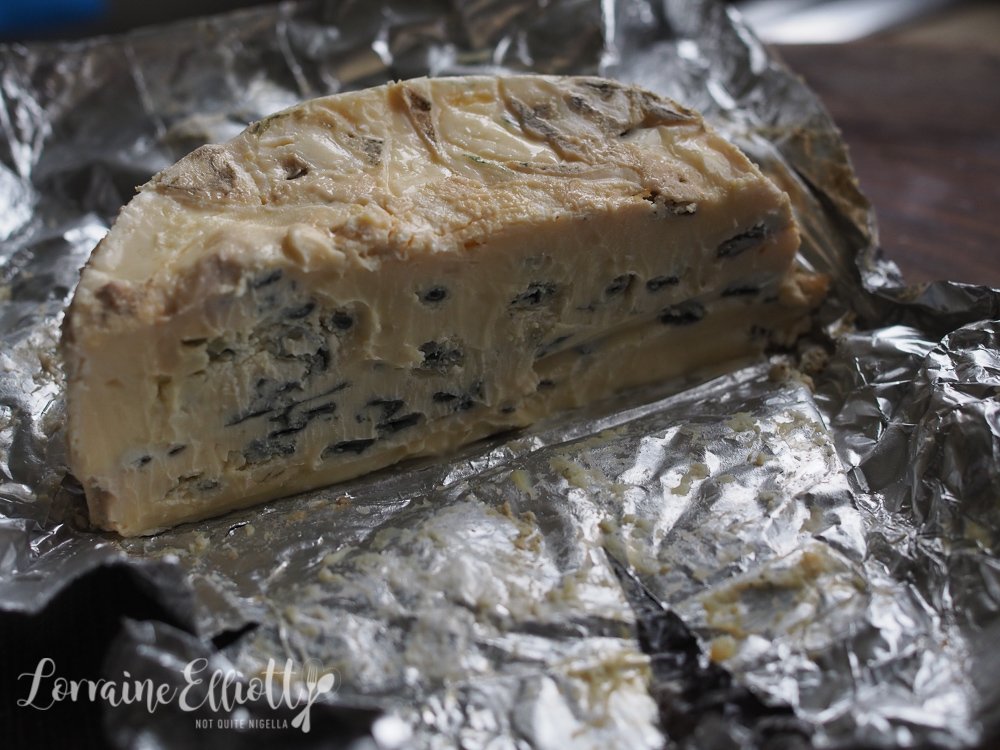 Too much blue cheese? I have found blue cheese is a cheese that actually freezes quite well!

I love making soups because they last over several meals and also freeze well. I made a big pot of this in the afternoon and then I went to take Teddy out for a walk with Ivy and her dog Thor. I should preface this story by telling you that I rarely take Teddy for walks. Long, fun walks or runs are strictly Mr NQN's territory. This is intentional because I wanted Teddy to bond with Mr NQN. Mochi showed her loyalty to me the second she met me and saw Mr NQN as her nemesis who would separate her from me. He would feel rejected and so I told him that Teddy would be his dog.

It was a hot Autumn day when Mr NQN gave me detailed instructions for taking Teddy for a walk. As a puppy he's an entirely different dog from senior sweetheart Mochi who only needed a quick 15 minute happy jaunt around the block once a day to sniff things. 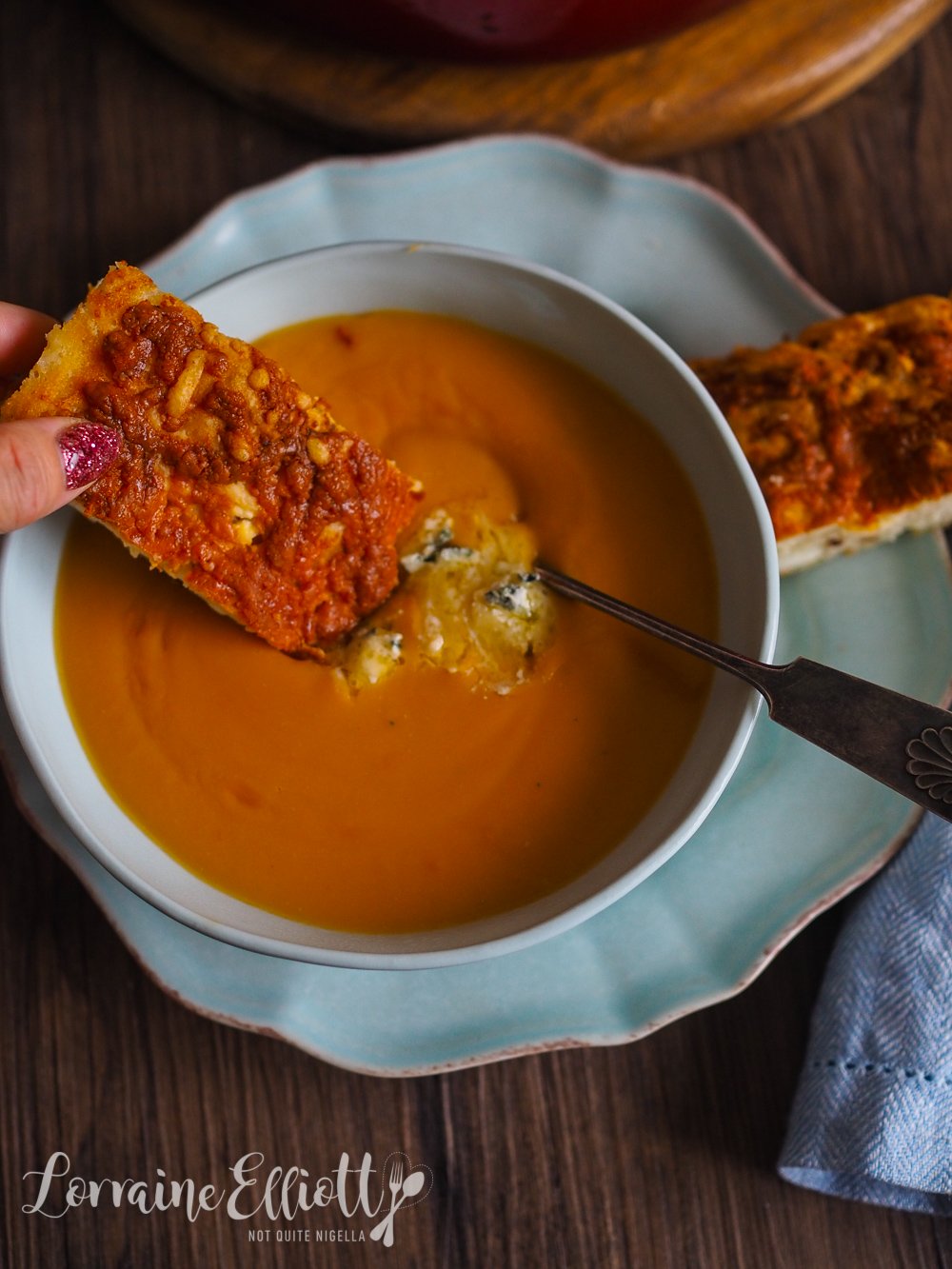 "Now don't forget to take the treat bag with you and reward him if he does something good. And throw him this orange ball but he doesn't really bring it back. If you need him to come back to you squeeze this green ball," he said before pausing, "But under no circumstances do you give him the green ball," he added as seriously as the "Don't feed them after midnight," warning from Gremlins.

I met Ivy at her apartment and we walked over to the park 2 metres apart from each other. I tried putting the treats bag around my waist but it was too big and I tried to adjust it a bit.

I became overwhelmed, trying to keep a 2 metre distance between me and other people. I threw Teddy the ball but accidentally gave him the green ball. His sheer joy at being given the forbidden green ball was suspended when he found himself something. 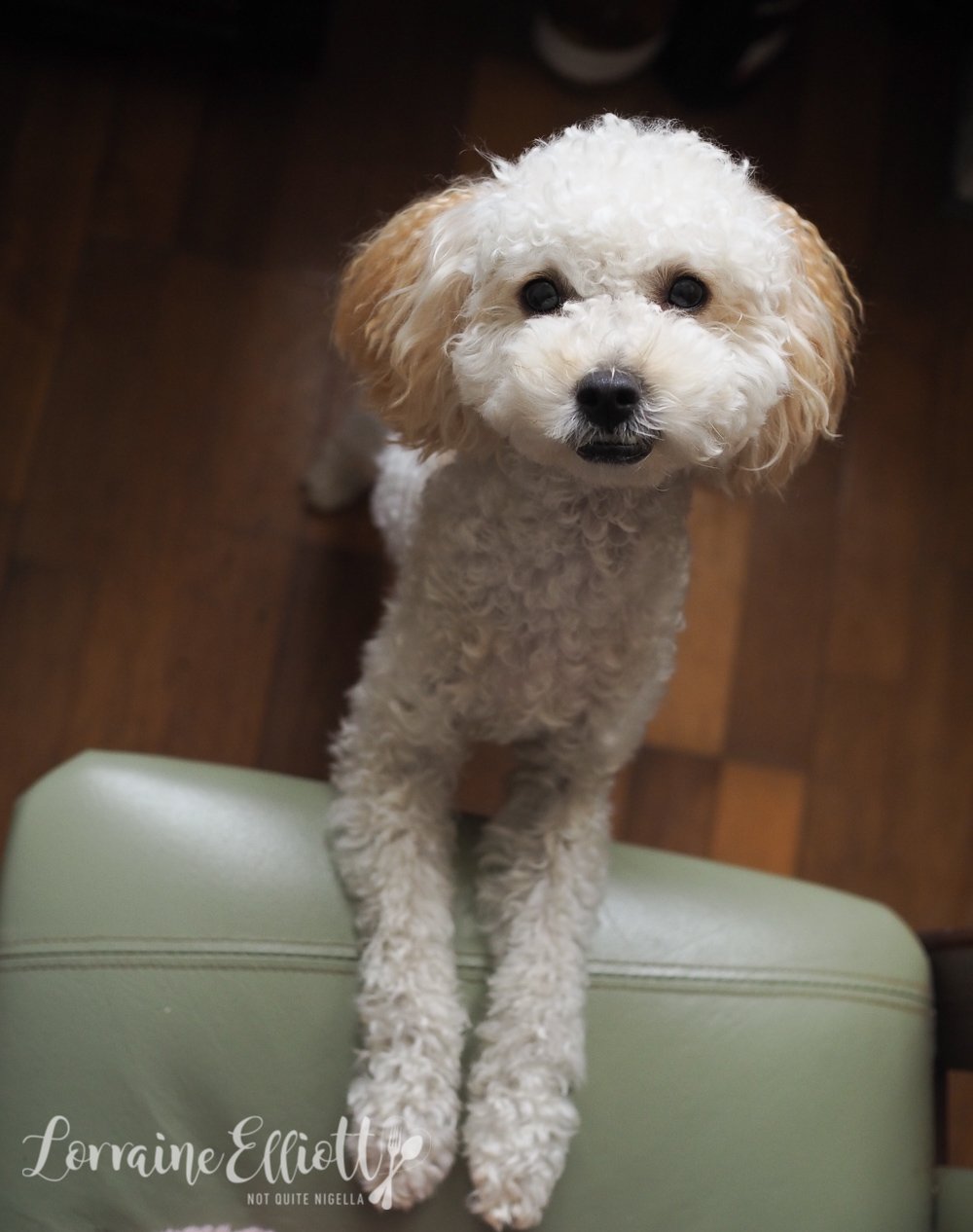 From my view it looked like a dead bird and I chased him while the treats bag was slipping down and was now around by my feet obstructing my running skills (and really they're no match for lightning Teddy). Then all the dogs smelled treats as the bag lay low and crowded around me with the treat bag by my feet.

"Did you enjoy your walk with Teddy?" Mr NQN asked me when I came back.

"No thanks!" and I handed him the treat bag, balls and went for a lie down thankful that dinner was made.

So tell me Dear Reader, do you like blue cheese? What do you eat with your soup? 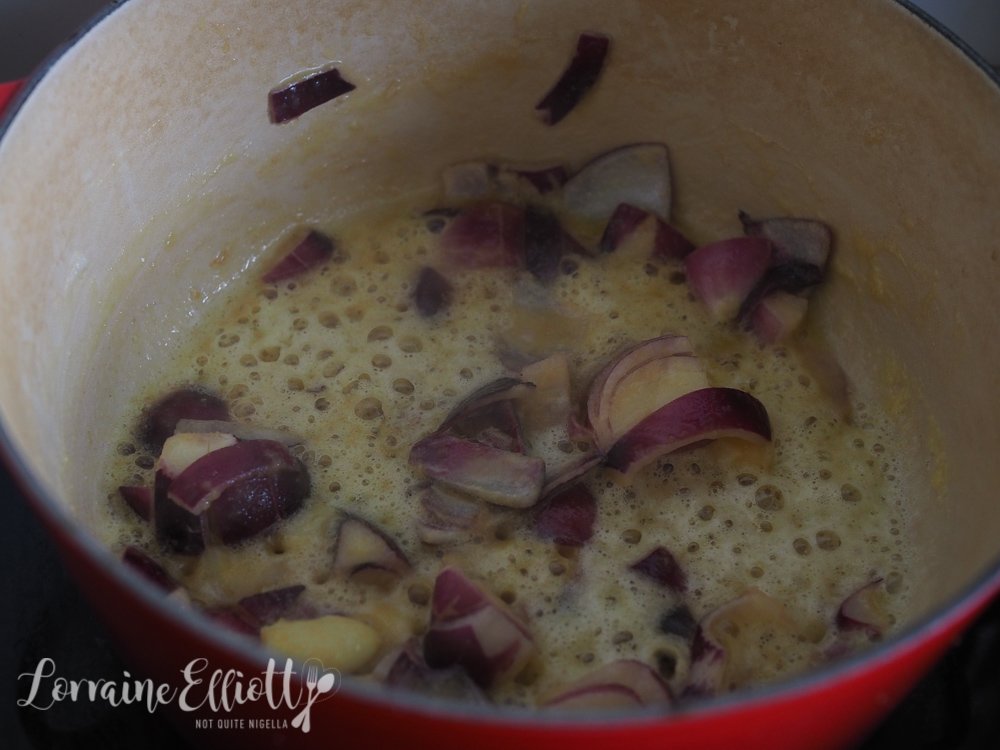 Step 1 - Add oil to a large cast iron pot and sauté onion and garlic on medium heat. Add the butter and melt and then add flour and stir and cook for a minute. 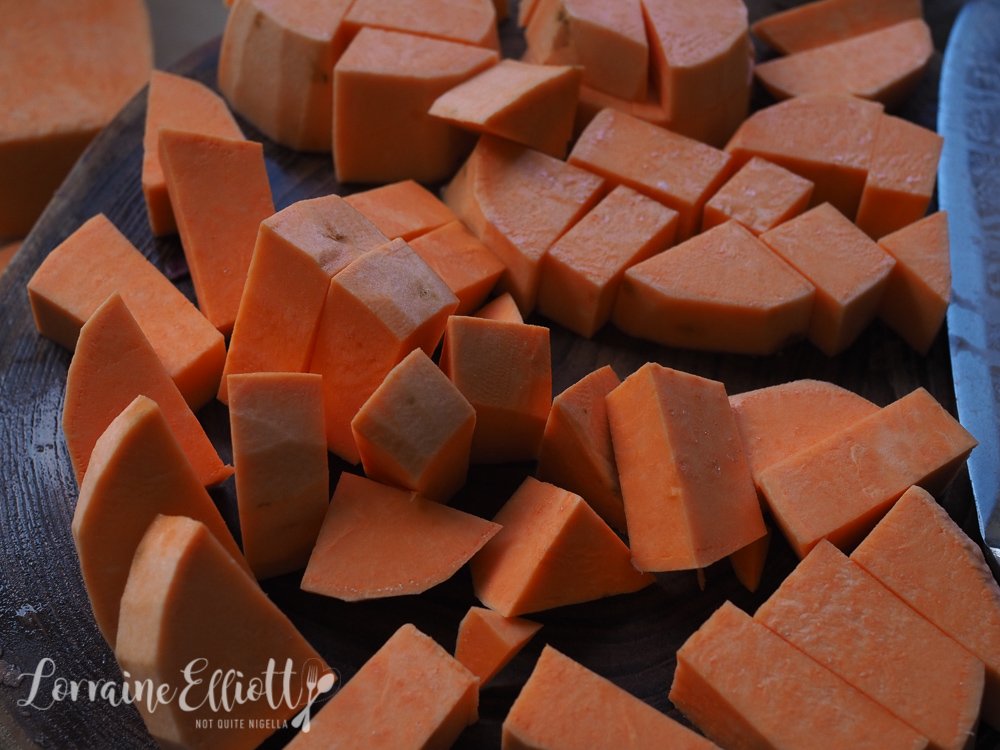 Step 2 - Add the sweet potato, stock, blue cheese and bay leaves and bring to a boil. Place the lid on and simmer for 15-20 minutes or until sweet potato is soft (the time depends on how big the sweet potato chunks are). Puree with a stick blender and season with salt and pepper. Do not puree this in a food processor while the soup is hot unless you have a pusher you can remove to allow the hot air to escape! Serve with bread or cheese bread. 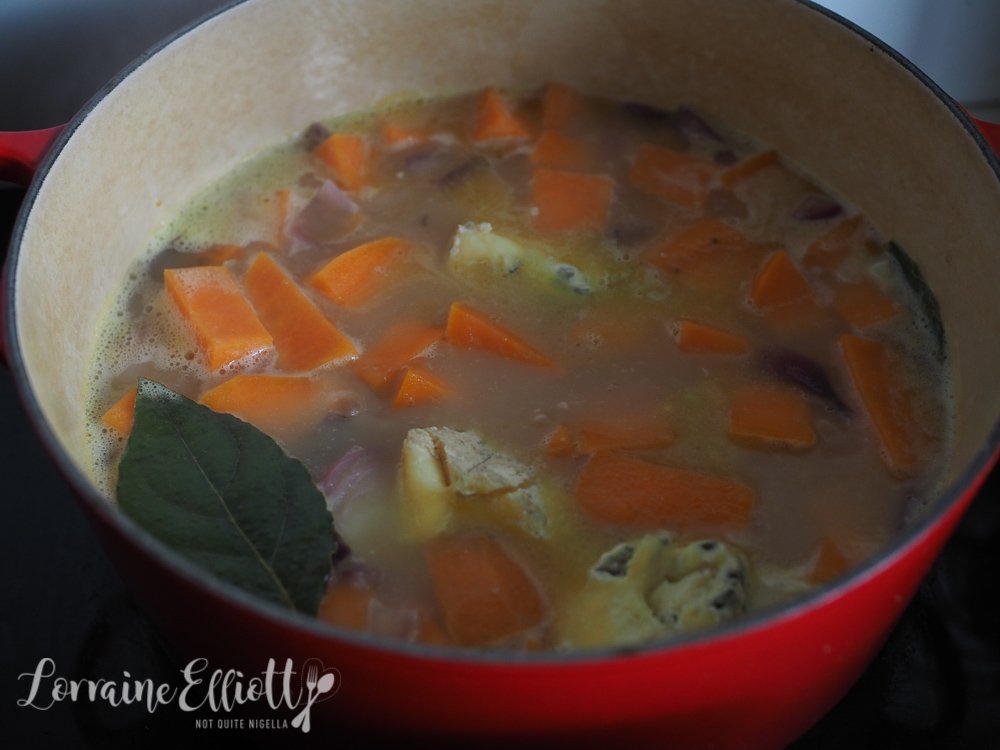 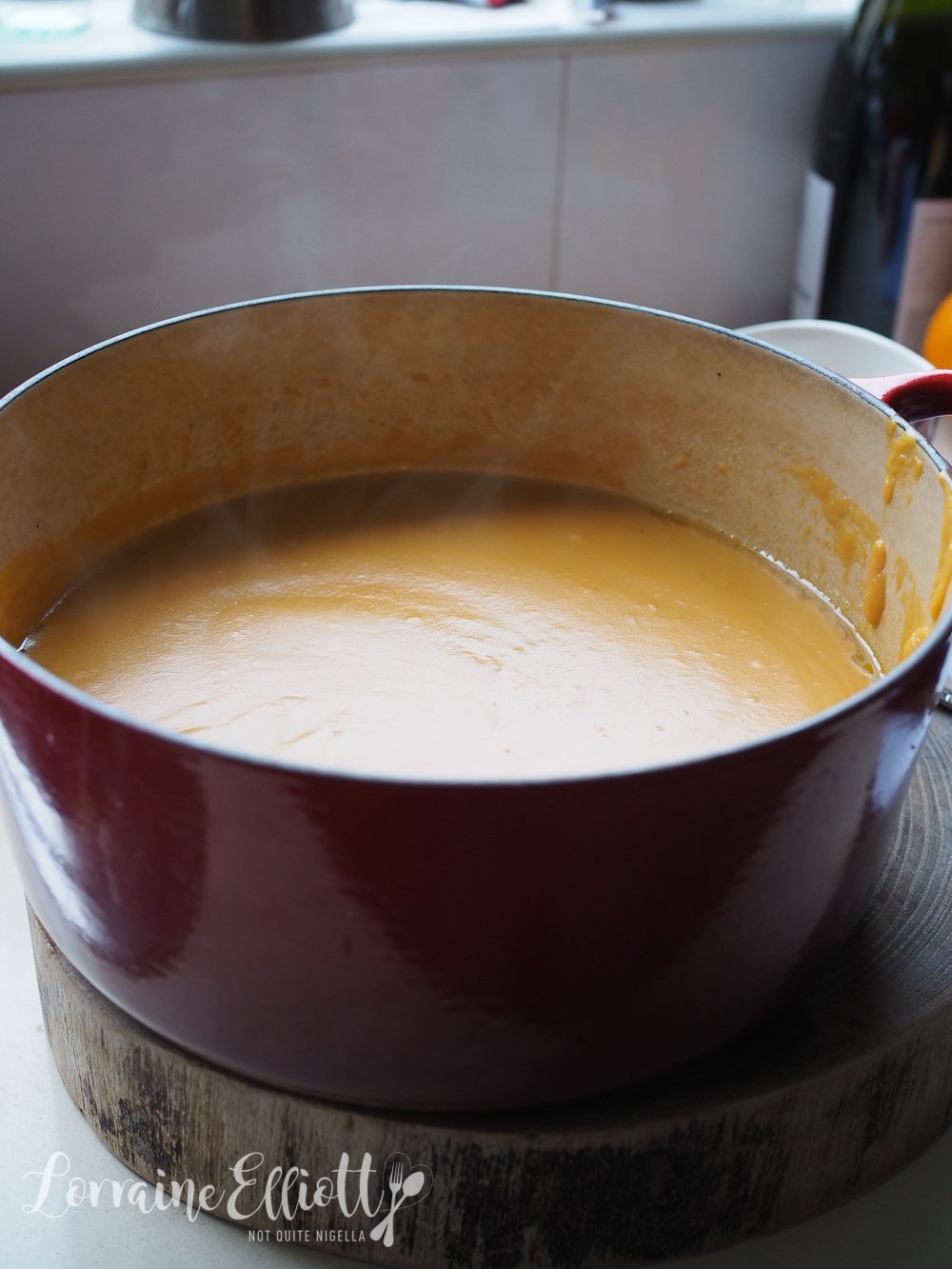