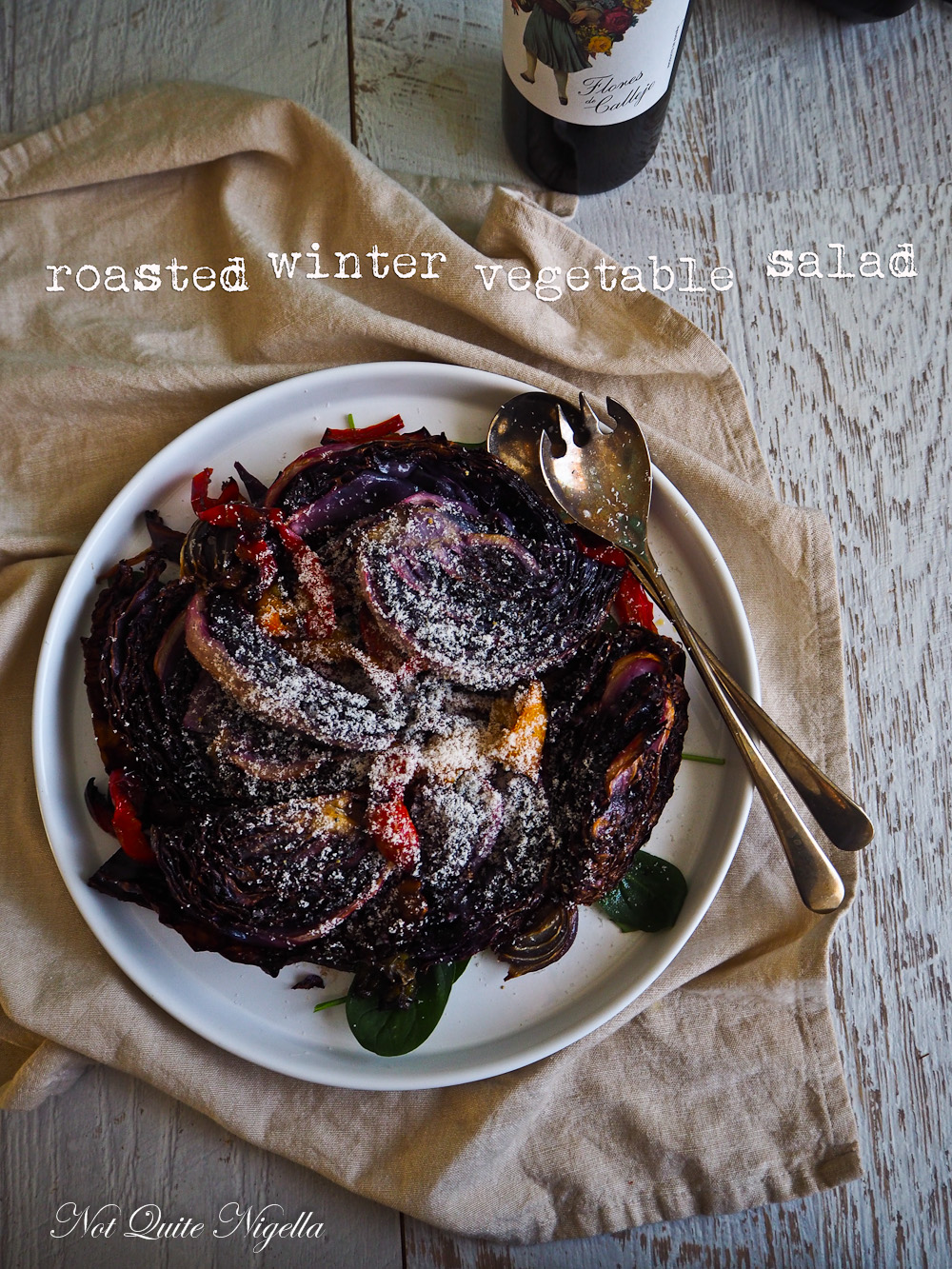 This roasted red cabbage salad is a happy revelation. While we eat plenty of red cabbage in salads and sauteed as an accompaniment to roasts, I never thought that you could slow roast a red cabbage but it turns out beautifully caramelised with crisp edges to the leaves. Here I pair it with roasted capsicums or pepper and baby spinach for a colour Winter friendly roasted salad.

They always say that you're never too old to learn things and I totally agree with that. I hope to be doing quizzes and listening to podcasts until I float away from this earth! I mentioned recently one podcast called Stuff You Should Know that I've been devouring on planes or during appointments when I'm just supposed to be doing nothing. One of them recently made my mind almost explode with an "aha" moment! It was called "How junk food works." Now I will admit that I do love junk food (hello road trip fuel!) but it was fascinating to hear the tricks that some junk food companies employ.

For example did you know that with one of my favourite junk food snacks, chips, they create them so that they feel light on the tongue and slippery so that your tongue doesn't even notice that it is eating something and suddenly, you've finished a whole packet? Another thing that they do is ensure that there is no distinct flavour so your tongue doesn't get fatigued when it thinks it has had too much garlic for example. They cite a packet of Doritos with its melding of flavour profiles as an example. And well of course that means that you eat a whole packet of them! Sneaky buggers aren't they! And I can really see how a packet of cheese puffs gets devoured so quickly because you don't even feel them on your tongue. 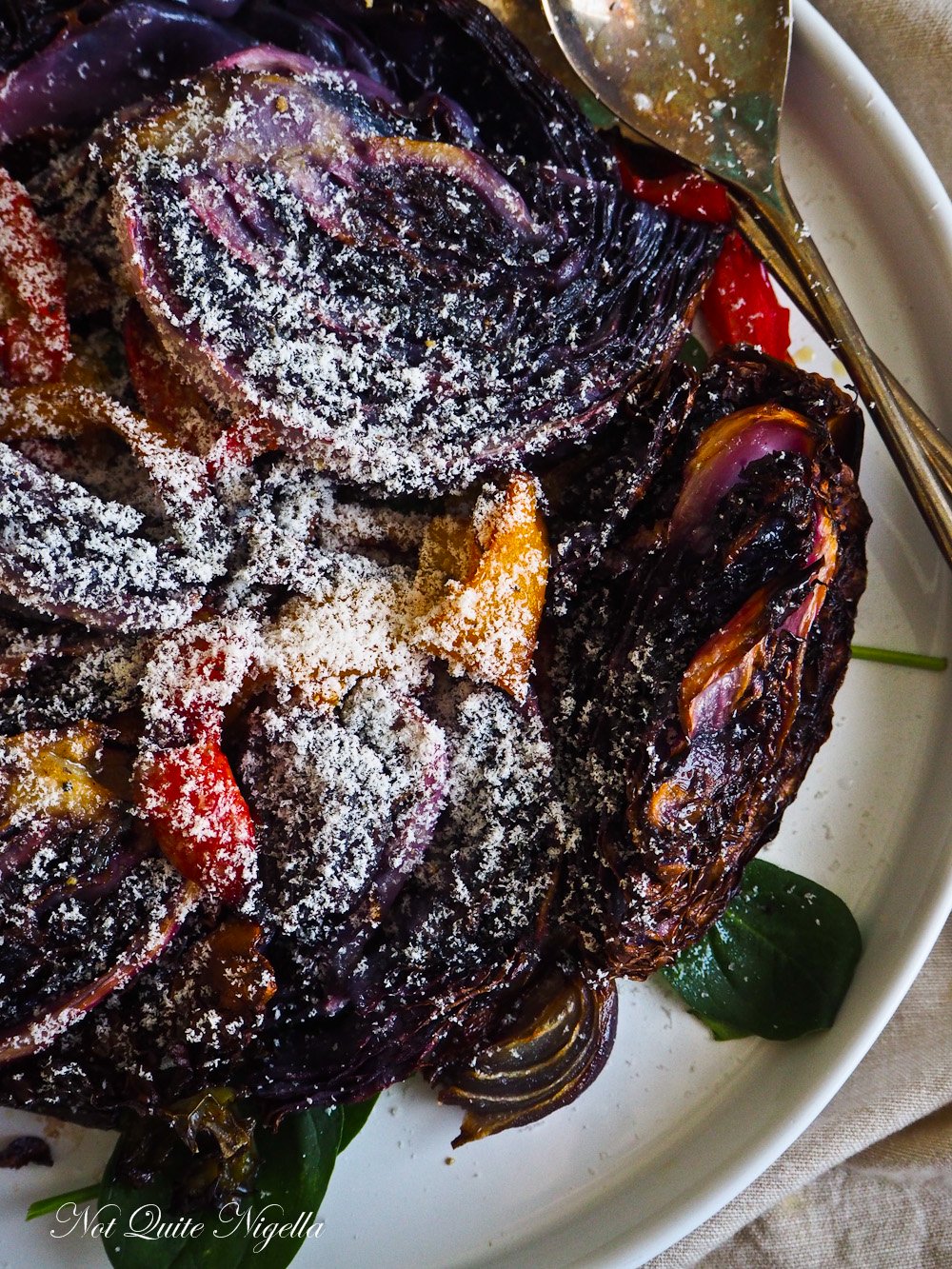 Something else that I learned recently was more whole food related. Well whole cabbage related really. I usually buy half a red cabbage every week but two weeks ago I bought a whole one as the market seller had an abundance and handed me over a whole one instead of my usual half. It sat there in the fridge for over a week and every time I looked in the fridge I would feel slightly guilty at having this perfect specimen winking back at me. I just didn't feel like eating salad because it was so cold.

Then I remembered a slow cooked red cabbage I had at Town Mouse in Melbourne last year. The restaurant had done all sorts of things to it but I wondered if I could just simply slow roast it? It was worth a shot! I decided to make a whole roasted vegetable salad also roasting the capsicums that were sitting in the crisper too.

Can I just declare that roasting red cabbage is a happy revelation? The cabbage becomes beautifully sweet and caramelised with some crispy brown edges while the inner leaves are tender and sweet. I thought of mixing up a red wine vinegar, oil and sesame dressing but honestly it didn't need it. I just finished it with some parmesan cheese on top. And after that, I decided to get a whole cabbage every week to do this with, mainly because Mr NQN ate three quarters of it in one swoop. The remaining quarter was mine otherwise he would have eaten it too!

So tell me Dear Reader, have you ever roasted cabbage? Have you had any happy revelations lately? And what do you think about the junk food tricks? Can you see how it happens? 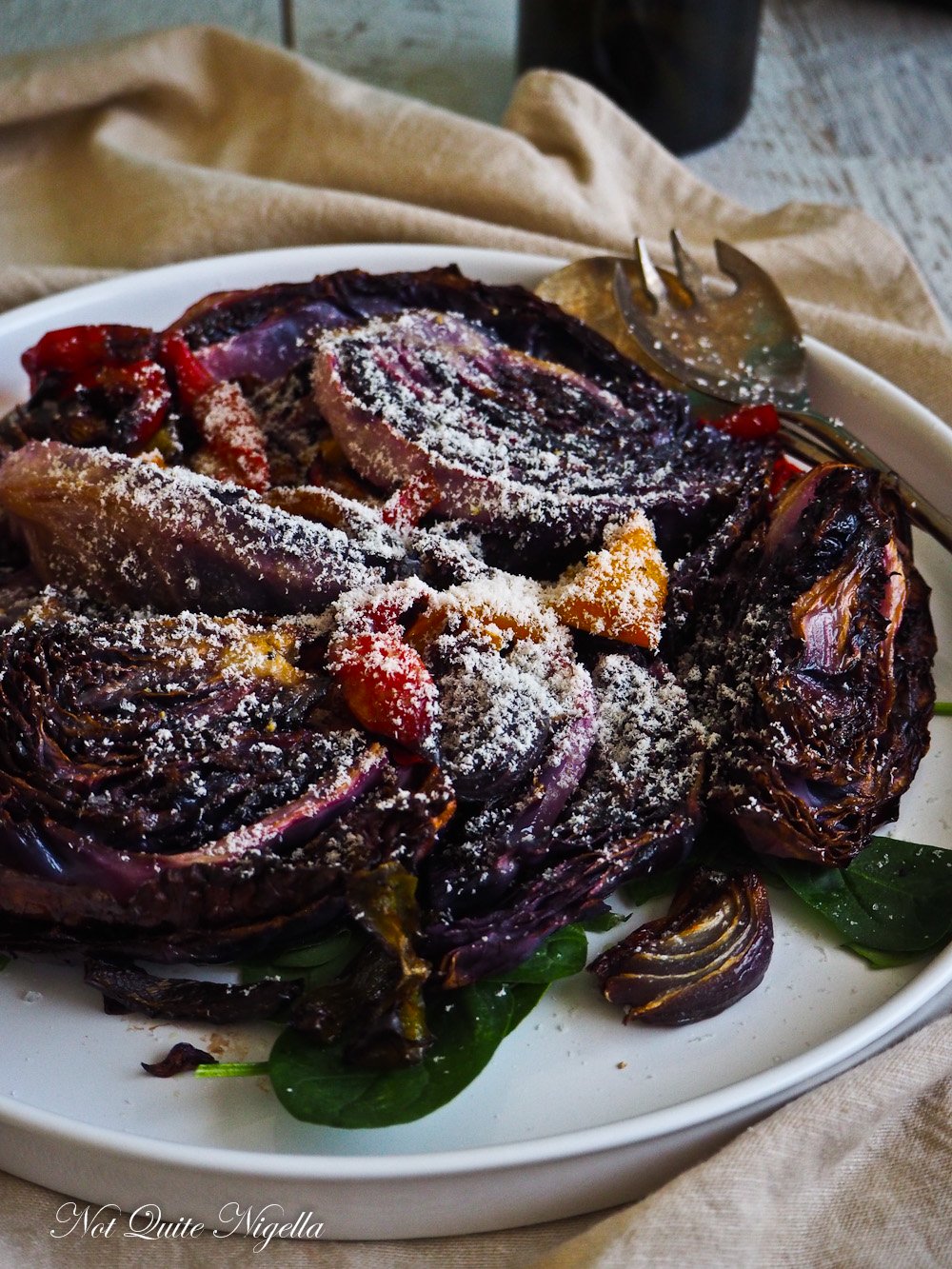 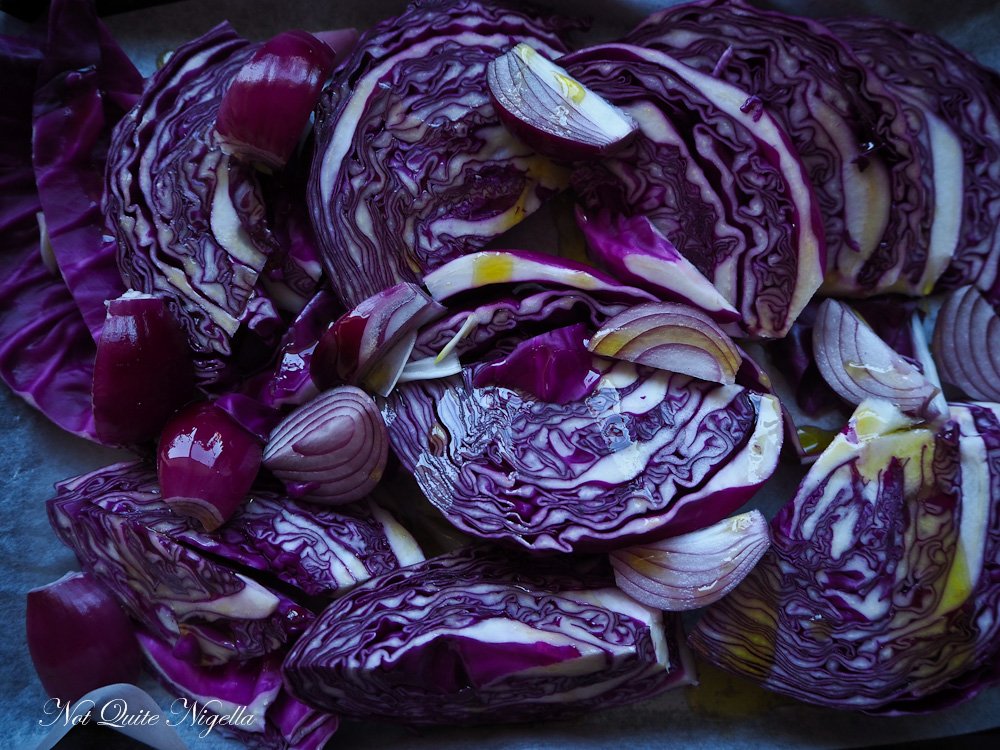 Step 1 - Preheat oven to 160C/320F and line two trays with parchment. Cut the cabbage in half and remove the core. Then cut each half into four or five wedges. Cut the onions into quarters and place on one tray alongside the cabbage. 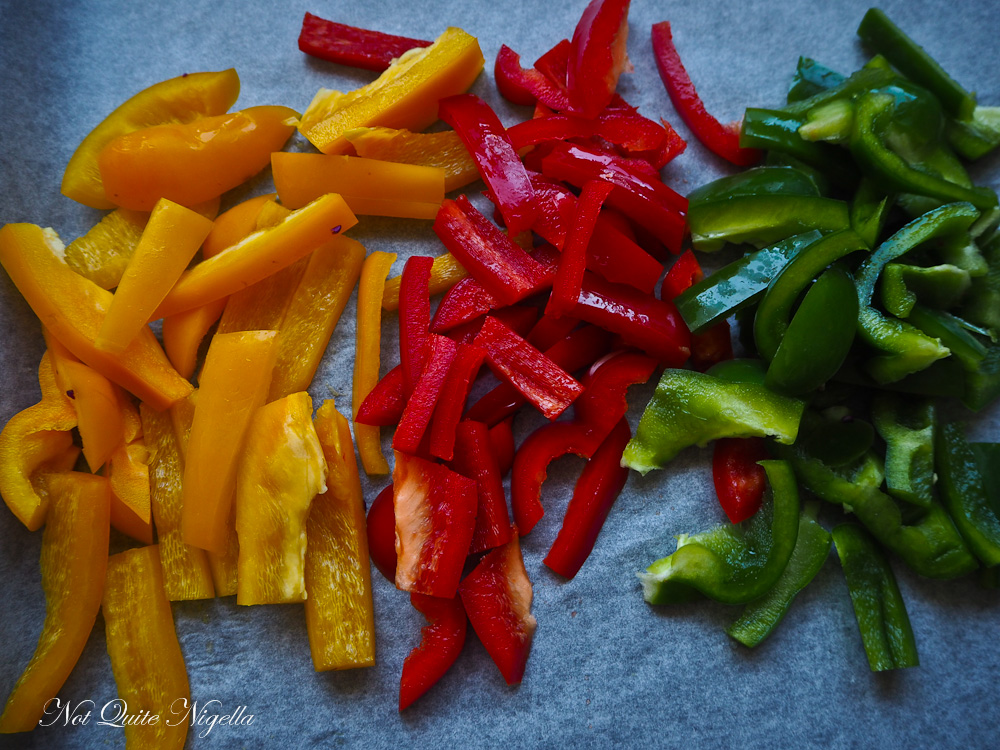 I have OCD so I need to do these things

Step 2 - Deseed the capsicums and slice into batons and place on the other tray. Drizzle both trays with olive oil and roast for 1 hour and 20 minutes. Grate parmesan cheese on top and season with salt and pepper and serve. 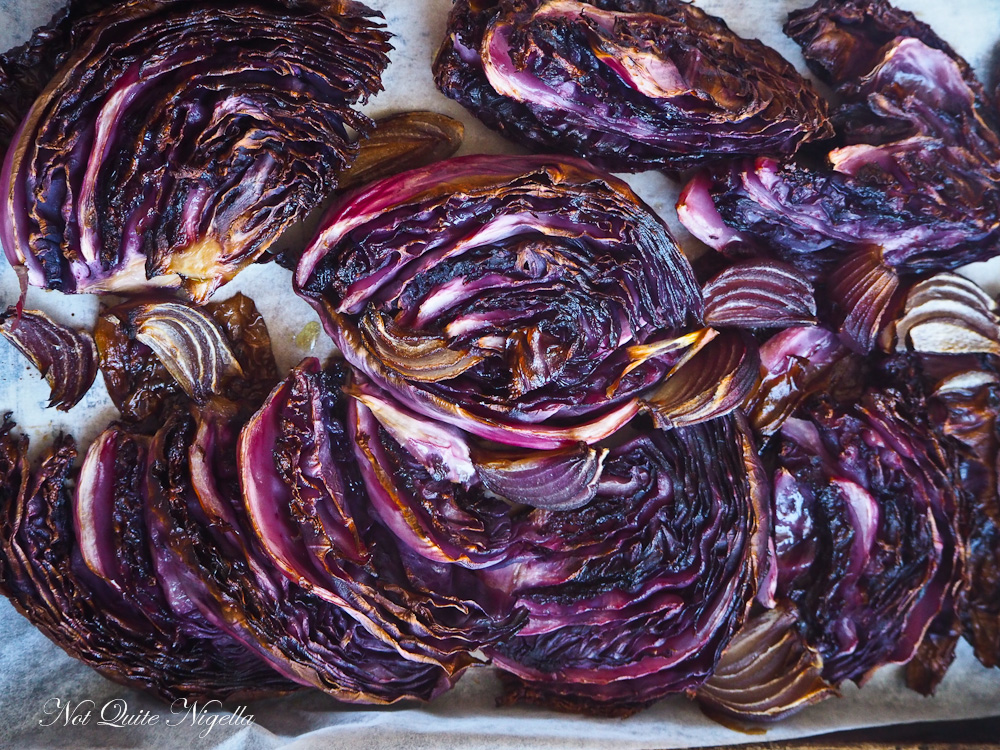