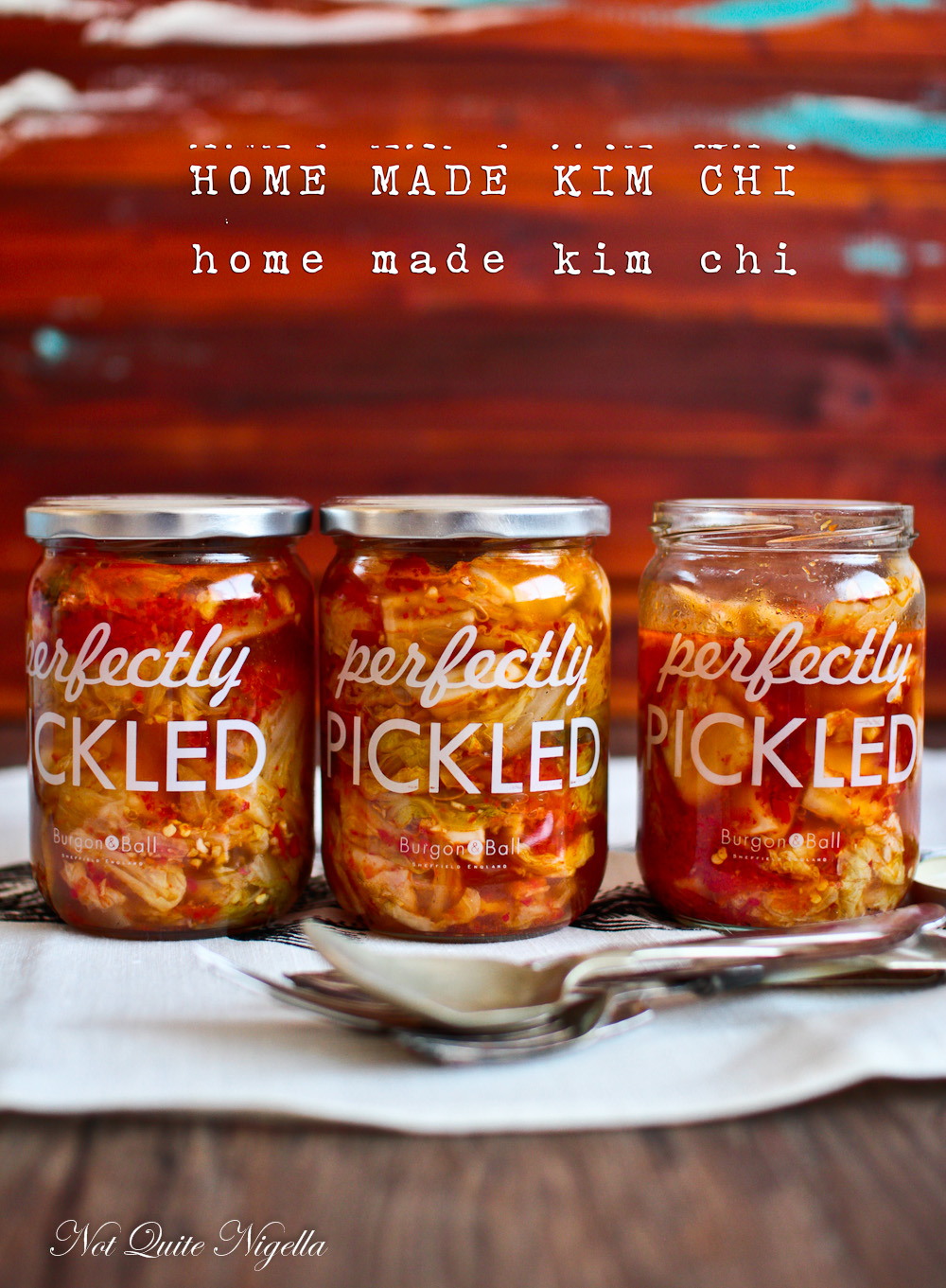 Fermented foods are one of the latest popular food trends-think kimchi, sauerkraut or kefir. My favourite is kimchi, the spicy fermented chilli laced cabbage. I came across a mild version at the very popular Sydney cafe called Cafe Oratnek. Theirs is an easy version and they were kind enough to share the recipe with us!

When I worked in advertising we would keep a sneaky little list of buzzwords that were commonly used during meetings. These would include and were not limited to "Blue skying" "Low hanging fruit" "Agile Marketing" and "Non linear" because some people in the room didn't quite know what they meant they would really just nod in reply as if they understood. And you'd get sign-off based on the fact that nobody quite understood what you were talking about.

I came across another buzzword or catchphrase a few months ago. It was #healyourgut. What it means the act of rebalancing your stomach or gut with probiotics. One way is by eating fermented foods such as kefir, kimchi and sauerkraut. It was a buzzword I could get behind because I happen to love kimchi and kefir (and to a lesser extent sauerkraut). Even better still you only need a small amount of these foods every day to do it. And home made fermented foods are best because you want them to be raw to preserve the goodness - store bought can often be pasteurised which kills the good bacteria. Lactobacilli or good bacteria is great for a healthy digestive system. 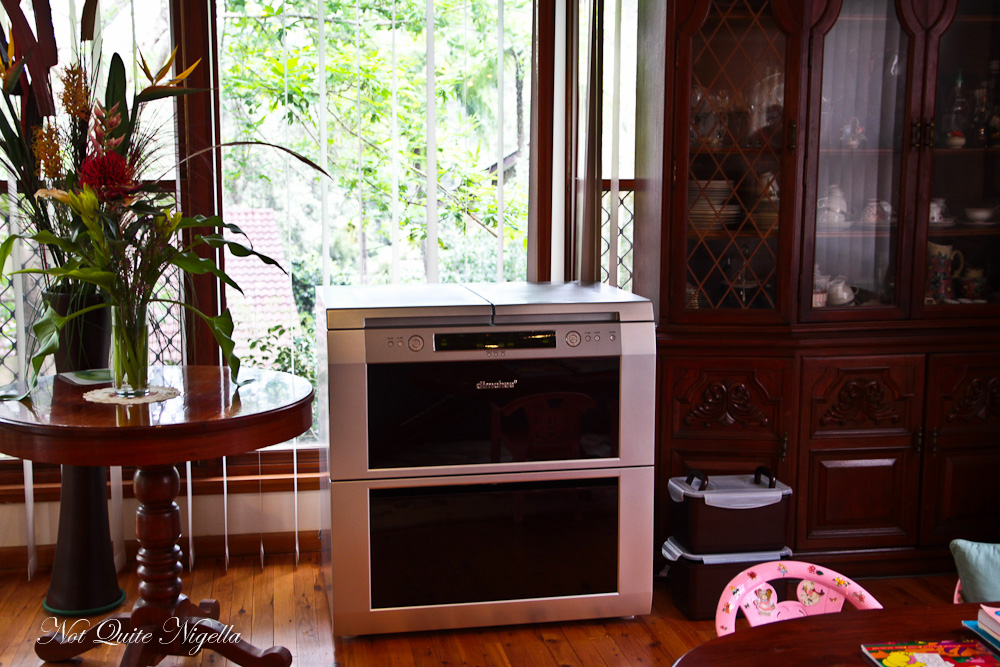 I know some of you don't love kim chi. It's an acquired taste for many, the spicy fermented cabbage a staple in the Korean diet. Some Korean households even have their own kim chi fridge to store it. When I first heard about Mrs Kim's kim chi only fridge during a dinner conversation with her soon to be daughter in law Rochelle I sat up straight. 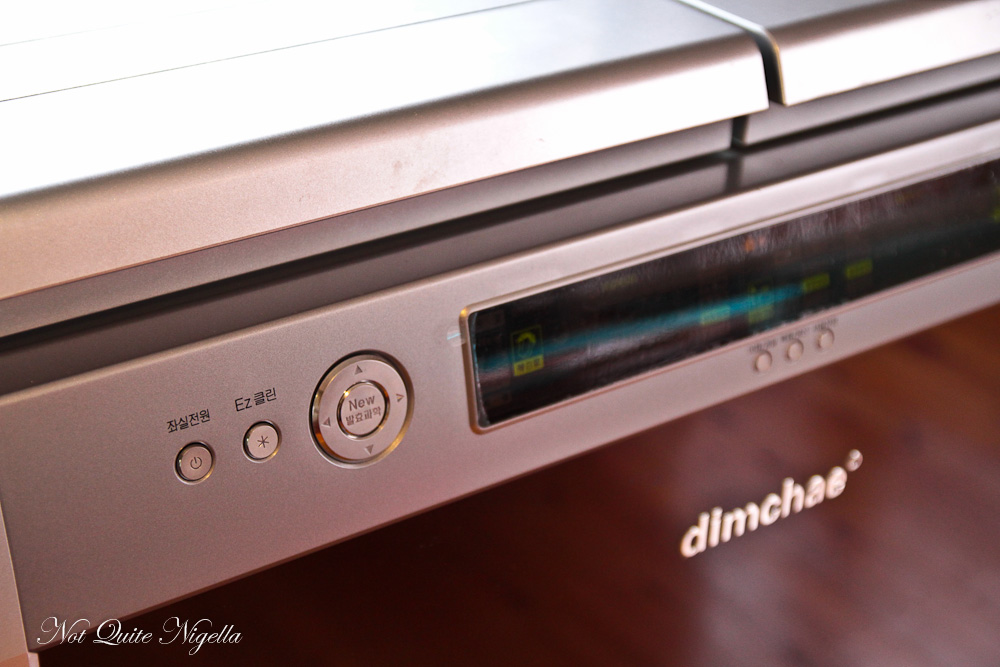 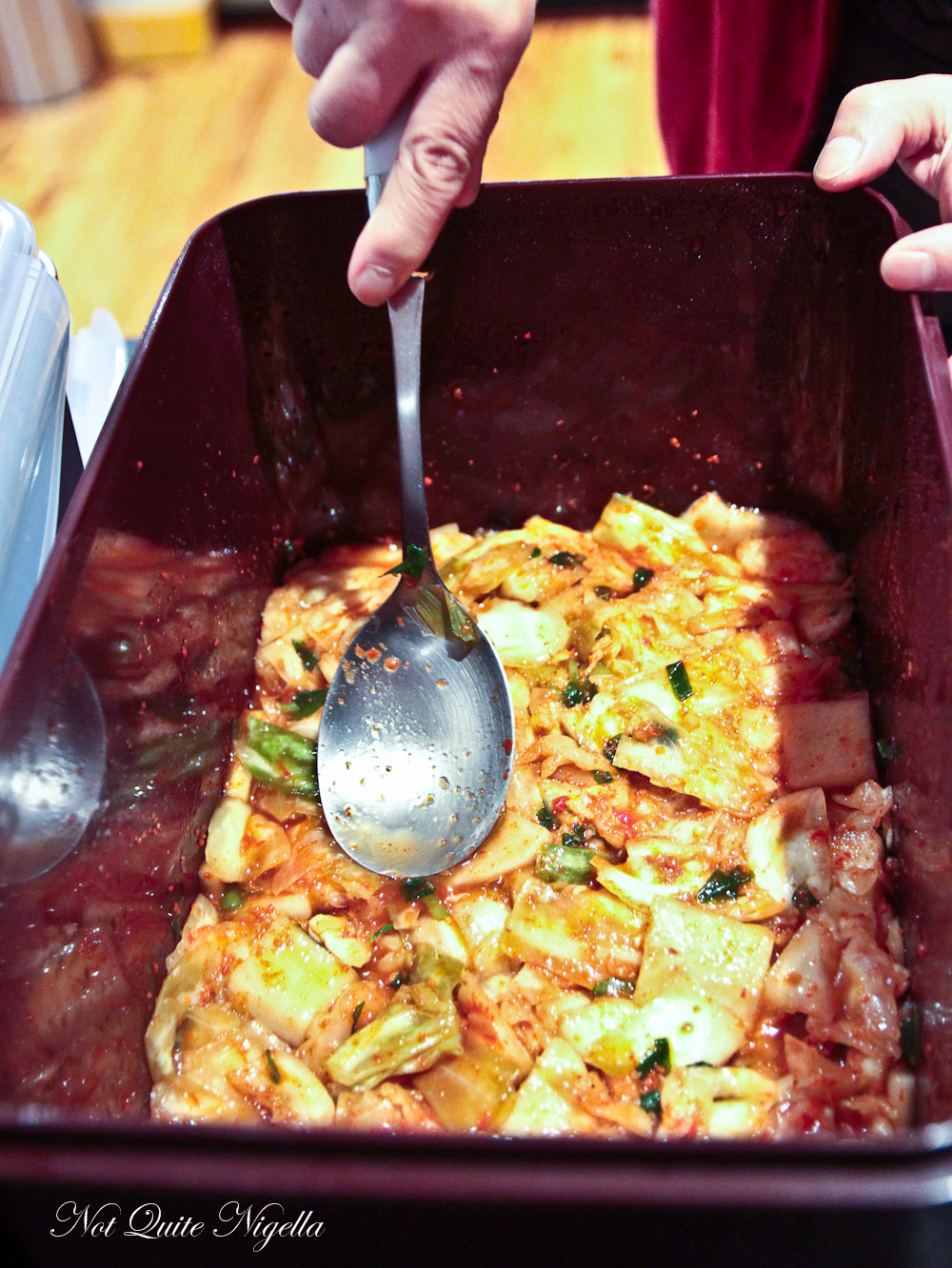 Mrs Kim bought the kimchi fridge about 5 years ago and it wasn't a cheap item at $3,500. The reason for the purchase of this fridge is because it can do two things-it can store the fresh kim chi so that it doesn't start to ferment as it does much quicker in a regular fridge by storing it at a colder temperature without freezing it. The kimchi stored in this fridge takes 1-2 months to start fermenting. The fridge also serves a dual purpose-it can also ferment the kim chi at a couple of presses of the button by increasing the temperature. She tells me that during Summer it only takes 1 day to ferment kim chi but during winter it takes days to do this. She tells us that day one day kim chi changes and tastes different depending on the day that you eat it. 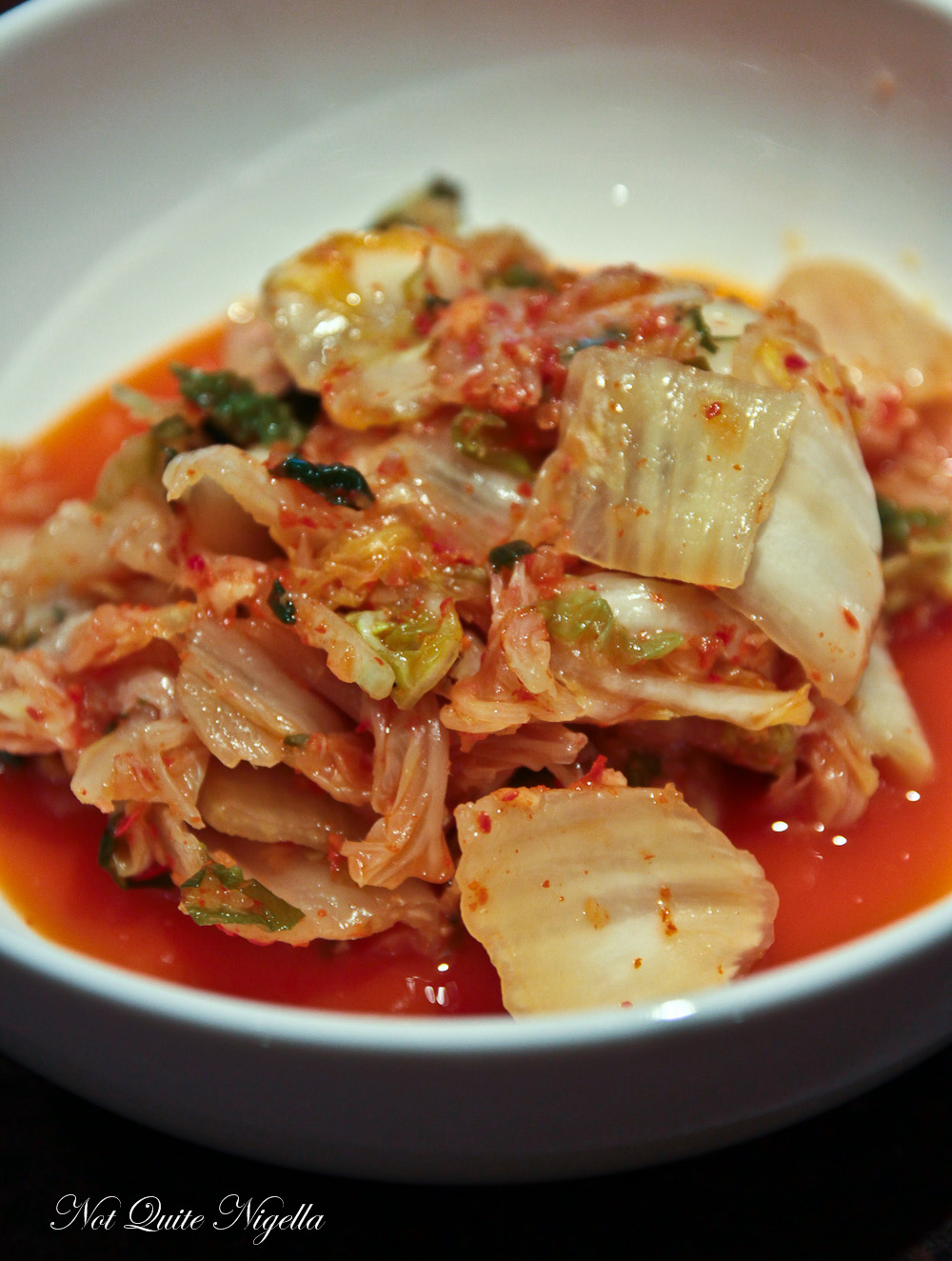 She and the family prefer a milder kim chi. "We're Australianised" she says with a giggle so they prefer to eat it fresh. During Winter, which is the best and most cost efficient time to eat cabbage she and her husband (now that the kids are grown up) spend a day preparing kim chi much in the same way that some Italian families prepare tomatoes for sauce during summer. They prepare five cabbages at a time and in Korea they prepare it in Autumn to eat in Winter. The most time consuming process is salting the cabbage which can take up to one day to do for large cabbages. The most difficult to prepare is the kim chi with the cabbages sliced in half vertically (tongbaechu). For ease of eating though, chopped up kimchi is popular although the half cabbages are said to have the best flavour. 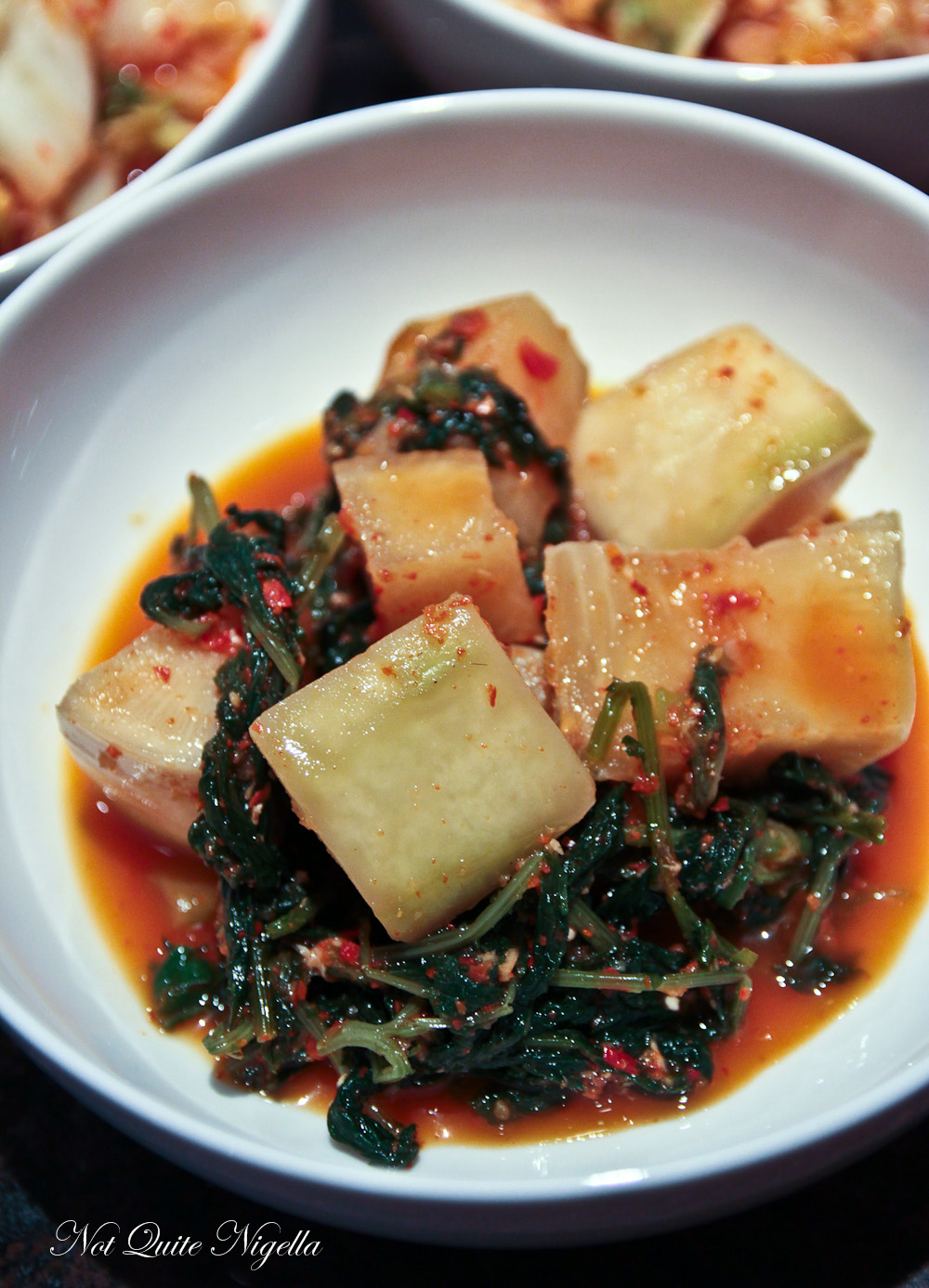 She tells me that it helps in digestion much in the same way that fermented yogurt helps. For those that don't like chilli, you can also make "white" kimchi using all of the same ingredients simply omitting the chilli.

This version is from Cafe Oratnek's chef Kenny Takayama and he calls it his "Impatient Kimuchi" because it is relatively quick and easy to make. It's one of the best starter kimchis for those that don't want a super powerful version. It also has the added benefit of being relatively quick to make without the need for a special fridge but best of all is the taste. I could happily eat this every single day and not get sick of it.

So tell me Dear Reader, are you into fermented foods? Do you think they make a difference to your health? Do you have a favourite? And are you trying to eat healthier in the new year? 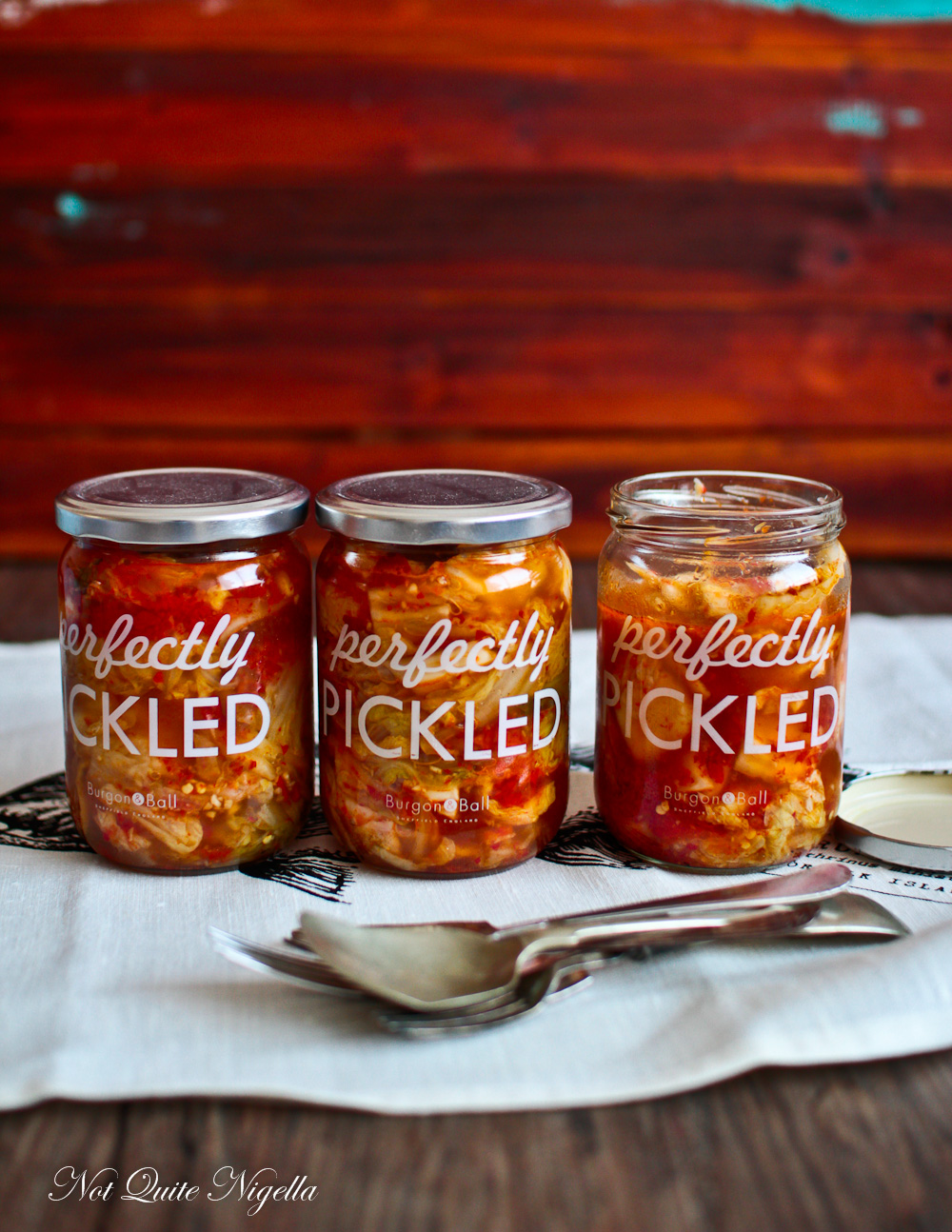 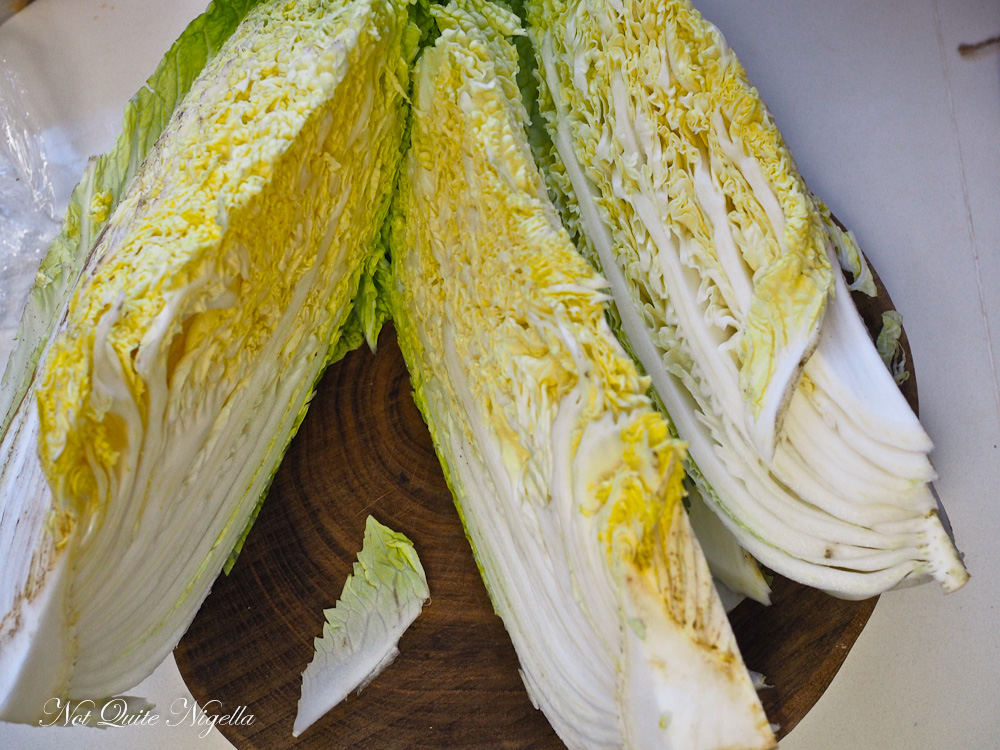 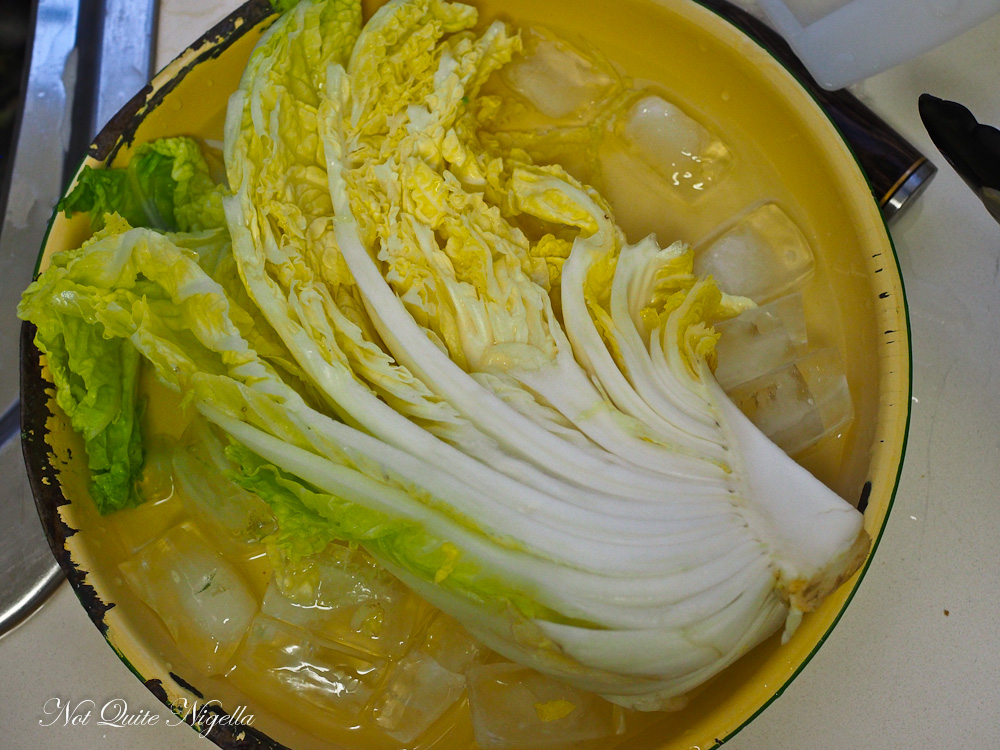 Step 1 - Slice cabbage into half and then into thirds or quarters. Blanch cabbage in simmering water in batches so that the water doesn't stop simmering. Place cabbage immediately into ice water to stop further cooking. Squeeze the cabbage leaves of excess water and then place on a draining rack on top of a tray. Cover and then place something heavy on top to press out excess water. Leave overnight. 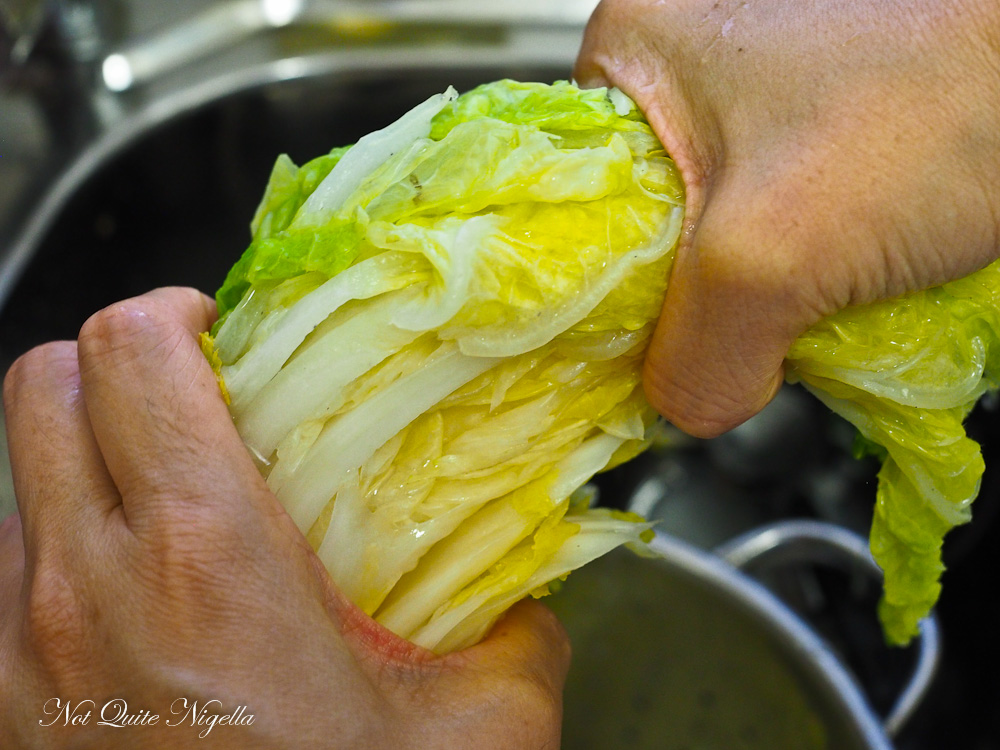 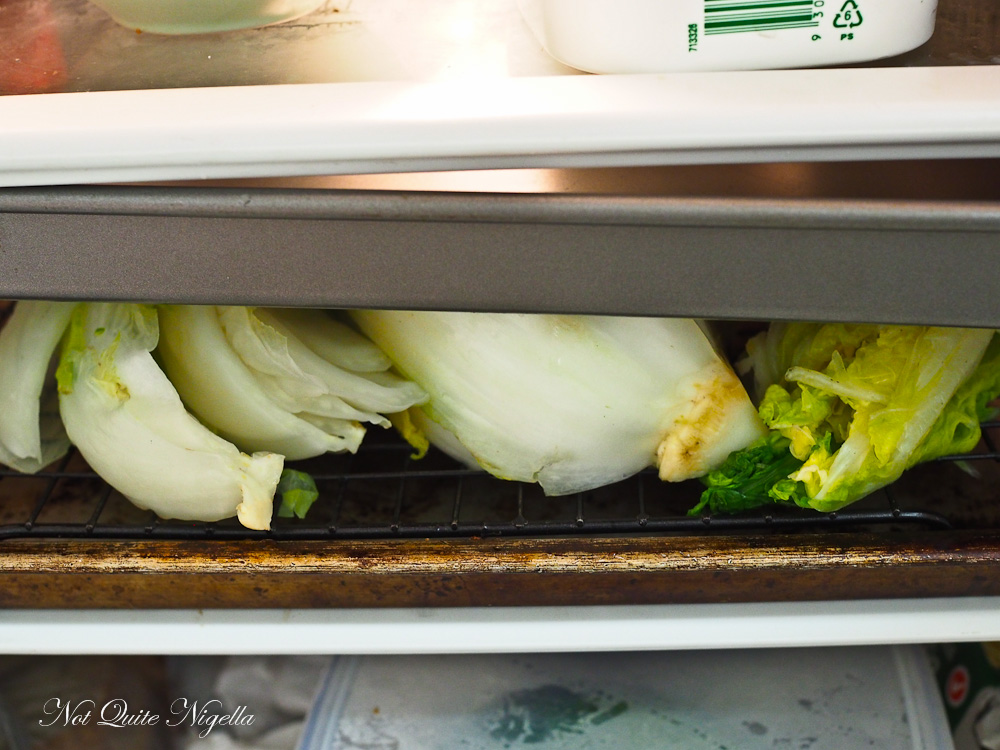 Step 2 - Process the chillies, salt, garlic, fish sauce, chilli sauce, brown sugar and oil to form a paste. Squeeze the cabbage one last time and then cut into 3cm or just over an inch pieces then coat in the sauce in a large container (or two). Mix well and place on the benchtop for 6 hours to start the fermenting process. Then transfer the container and keep it in the fridge. Allow flavour to develop for 2-4 days. As time does on the flavour develops further but I found that even after a week or two it was still really delicious and not too sour. Always use clean cutlery when taking kimchi out of the container. 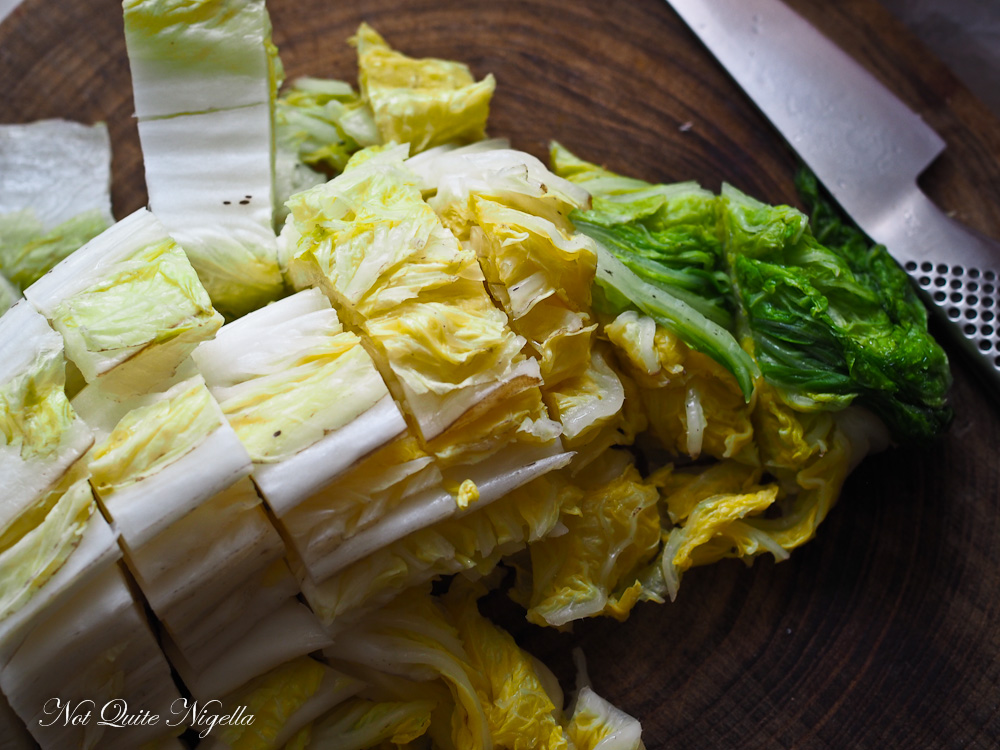