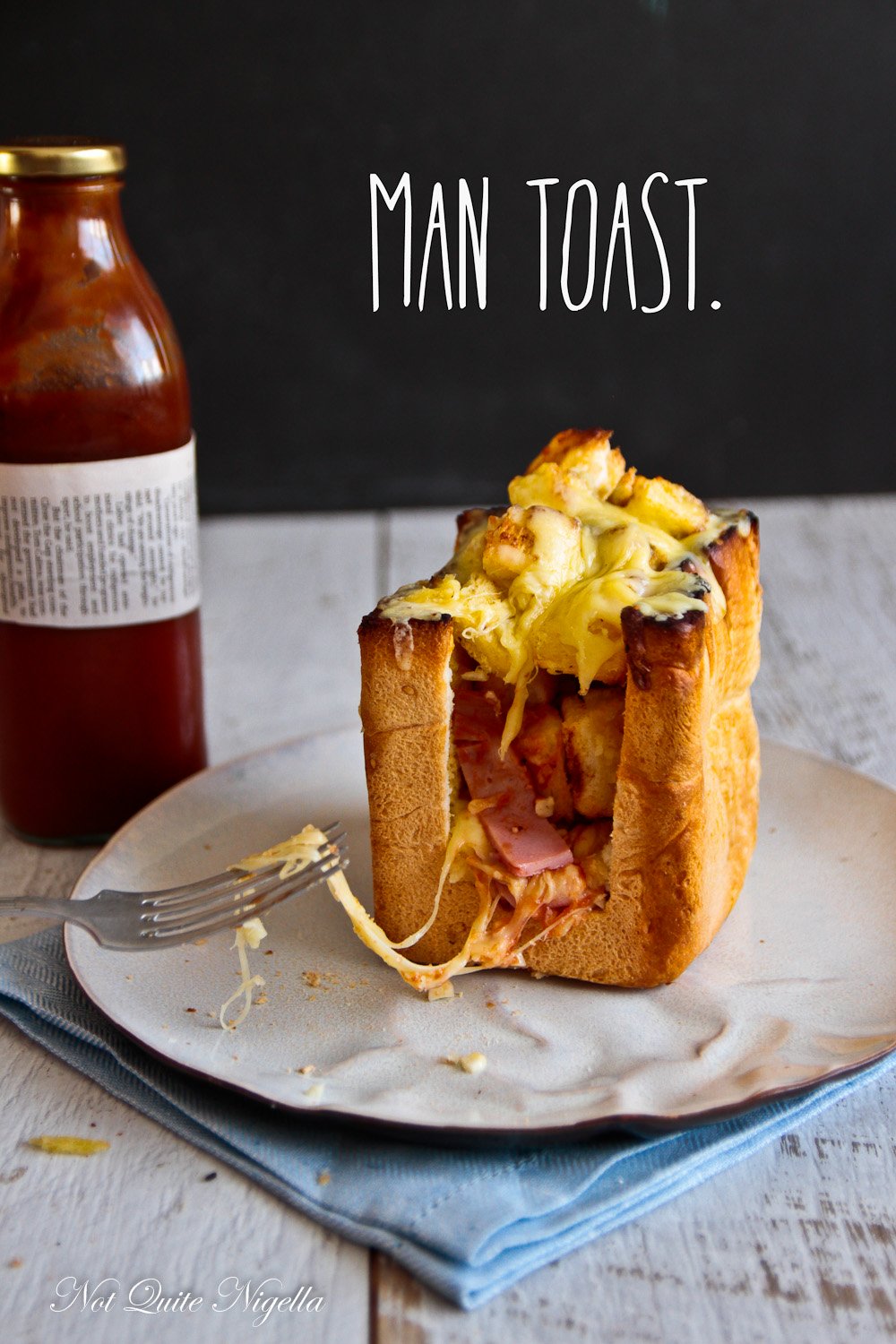 A mega version of a toasted sandwich with a twist this Man Toast (or in reality an Everyone Toast) is a fun way to serve up breakfast on the weekend for this Father's Day. Based on the Japanese "Brick Toast" phenomenon it is a toasted cavity filled with your favourite savoury or sweet fillings. Bring an appetite for this!

Happy Father's Day for all the dads in Australia! And for everyone else a very Happy Sunday. I saw a parody news headline the other day that said that people were in shock that it was September already. Except I didn't know that it was a joke, I thought it was real. Honestly. This year is crazy. 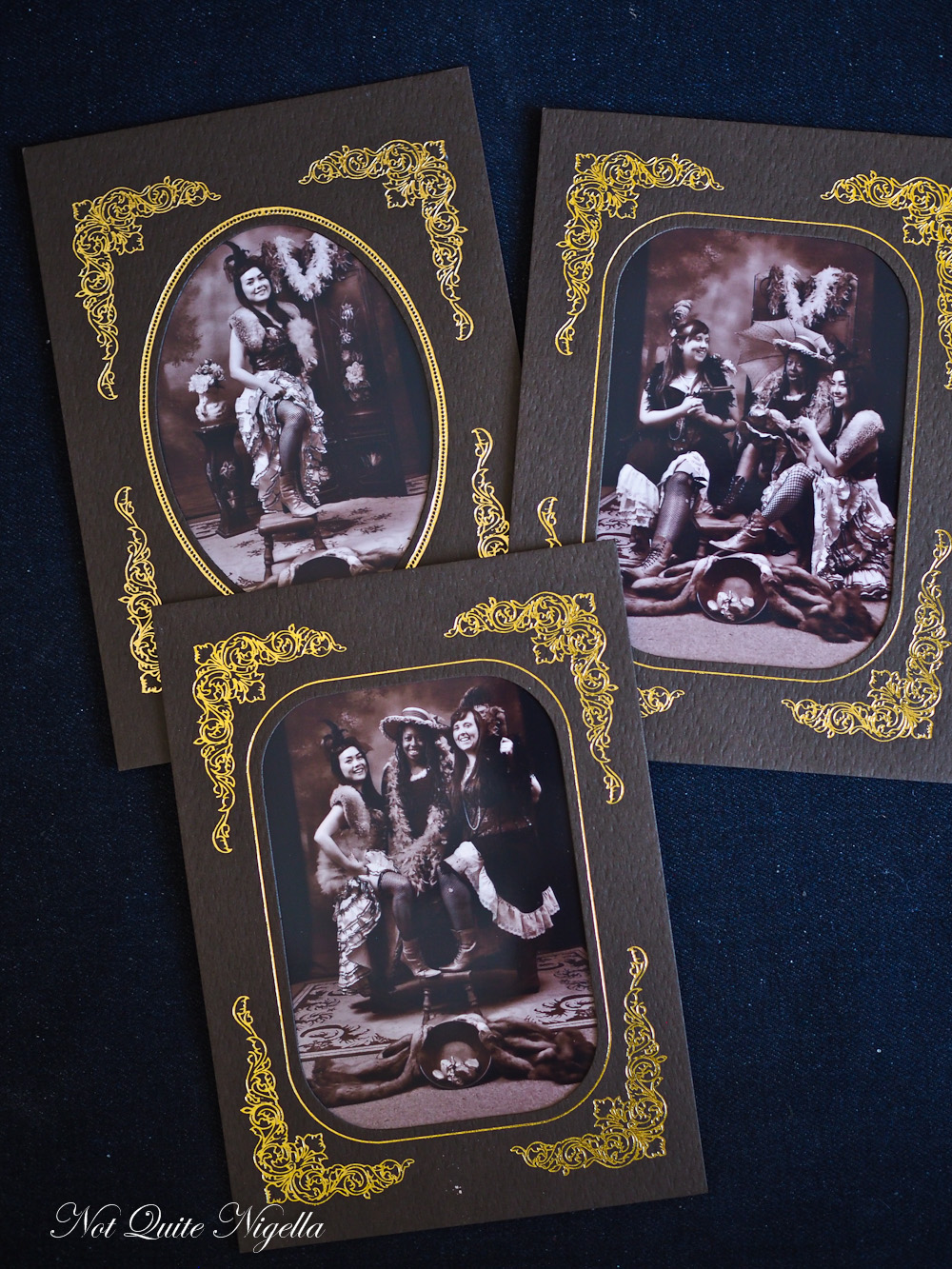 Every month I try and participate in Celia's In My Kitchen where we show what is new in our kitchens. This month everything new comes from Canada! Including these crazy funny images. We took them in Dawson City, the Yukon at one of those photo parlours. I love dress ups and this was really fun-although most things clashed in colour, the sepia colour makes it all look relatively old fashioned! You could choose lady or lady of the night. I was lured by the can-can skirt. I'm posing here with @cailinoneil and @farsightedgirl! 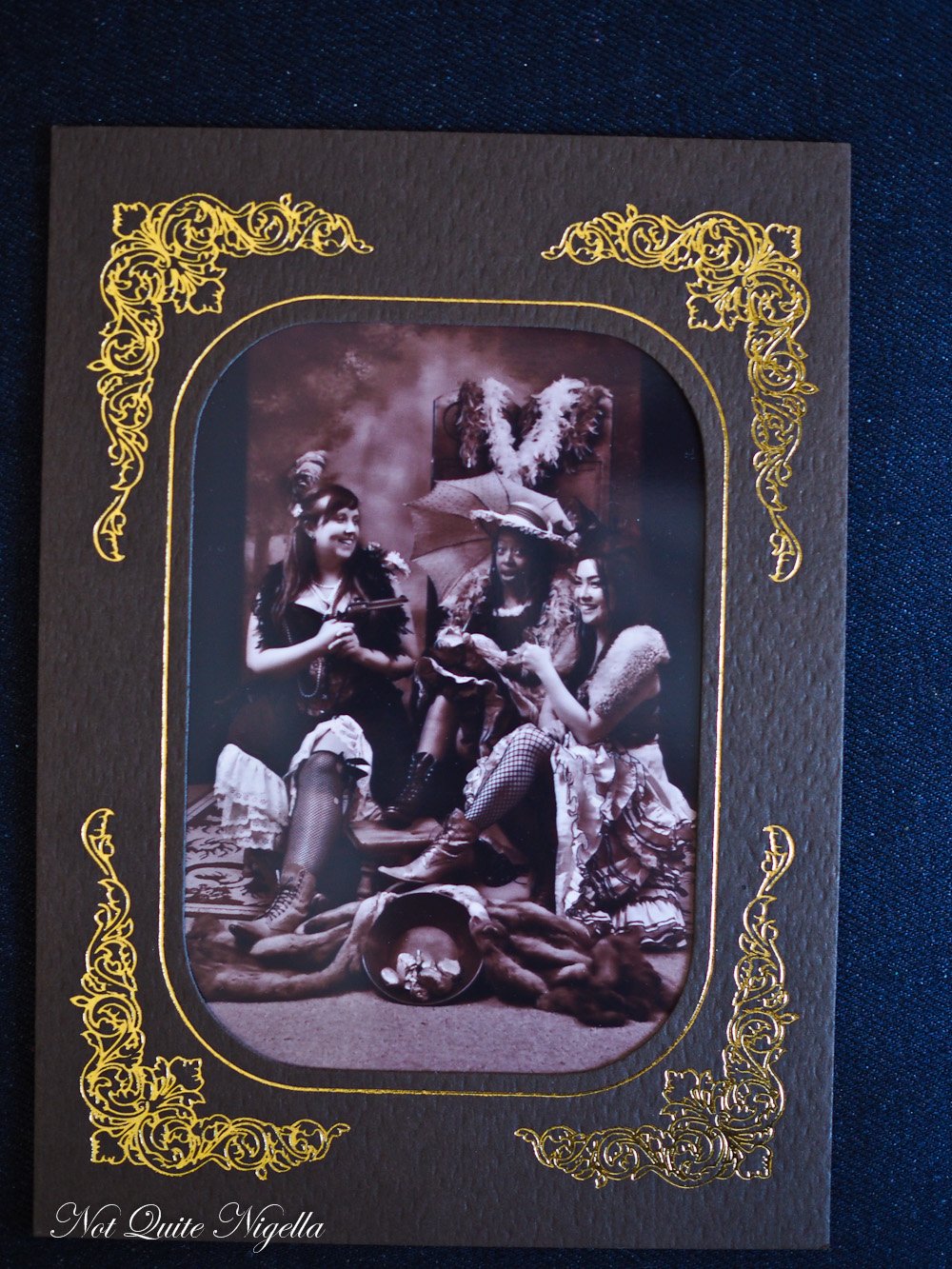 I don't know about you but I love samples, especially when they are things that you haven't tried before but there weren't any samples when I bought these so I bought them on blind faith that they would be good. The coconut brittle ended up going to my friend JY (and I tried some because I wanted to recreate it). 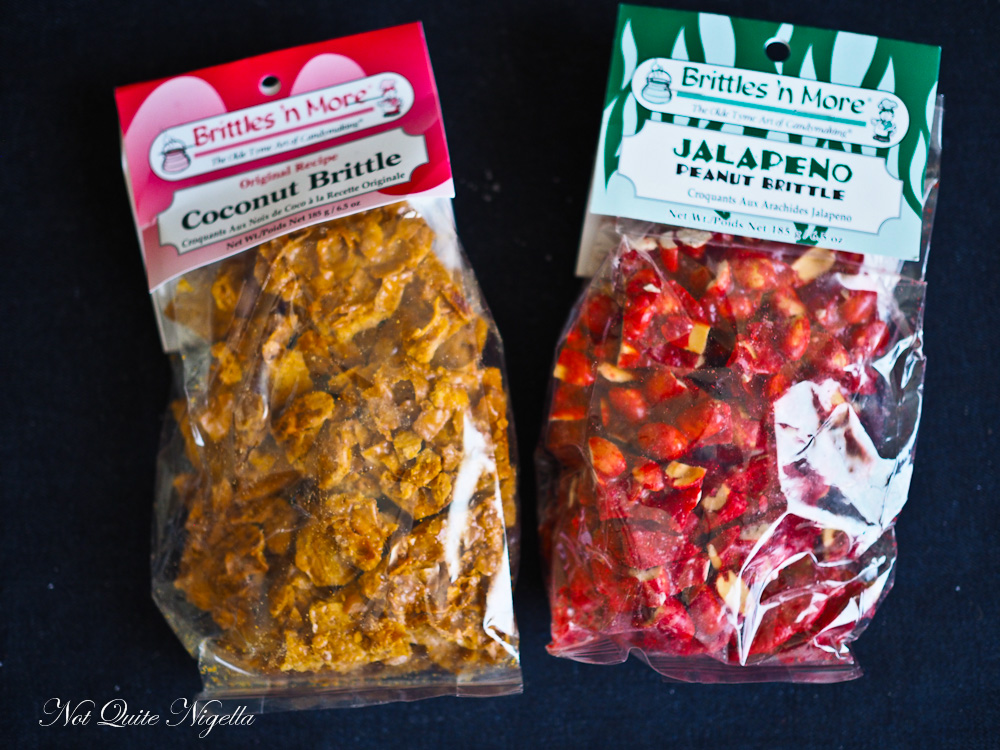 JY is allergic to nuts so she can't have regular brittle and this coconut brittle is SO delicious! I'll definitely be trying to recreate it on the blog soon. The jalapeno peanut brittle was for Belinda as she loves spicy, crunchy things and she adored it calling it "perfection". 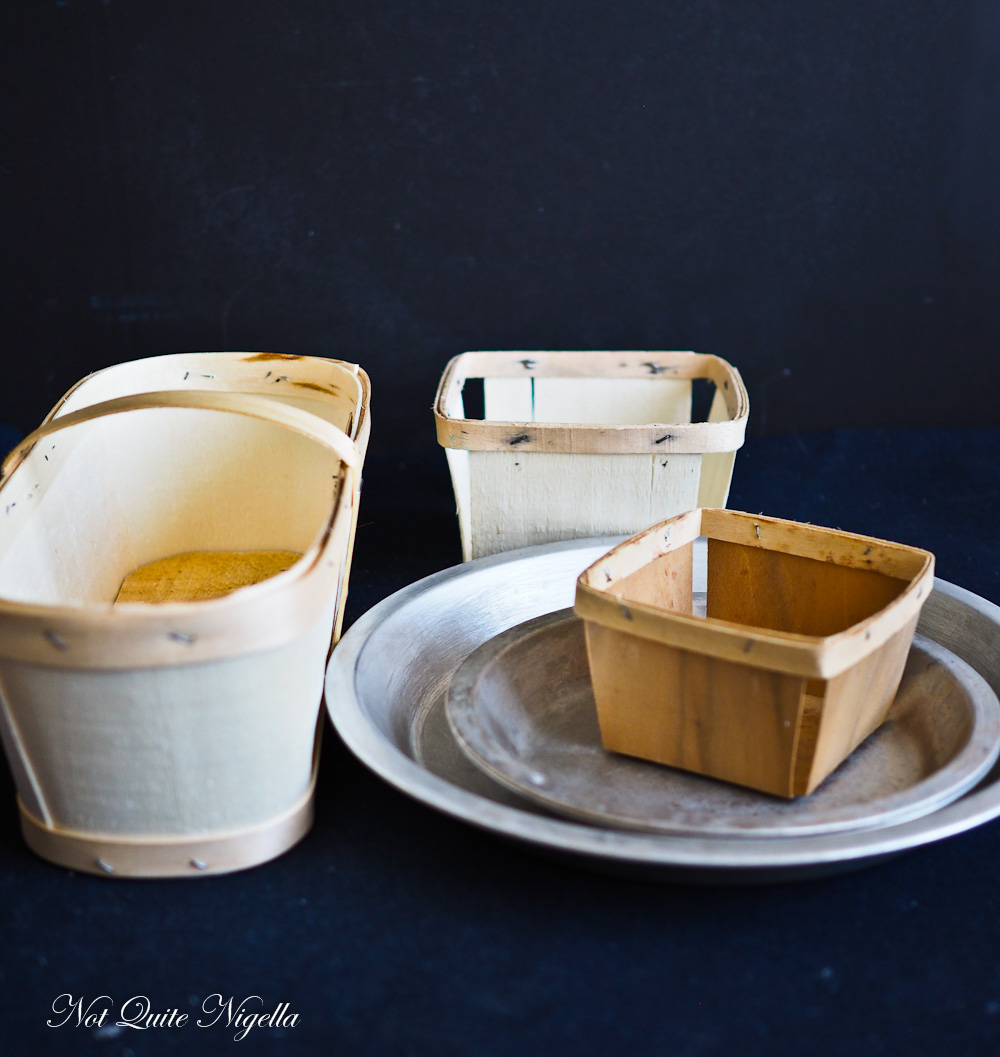 Have I mentioned how nice Canadians are? Well when I was looking for props I asked if I could buy some of these gorgeous baskets and the Ottawan stallholders gave them to me although they didn't have to as they reuse them. 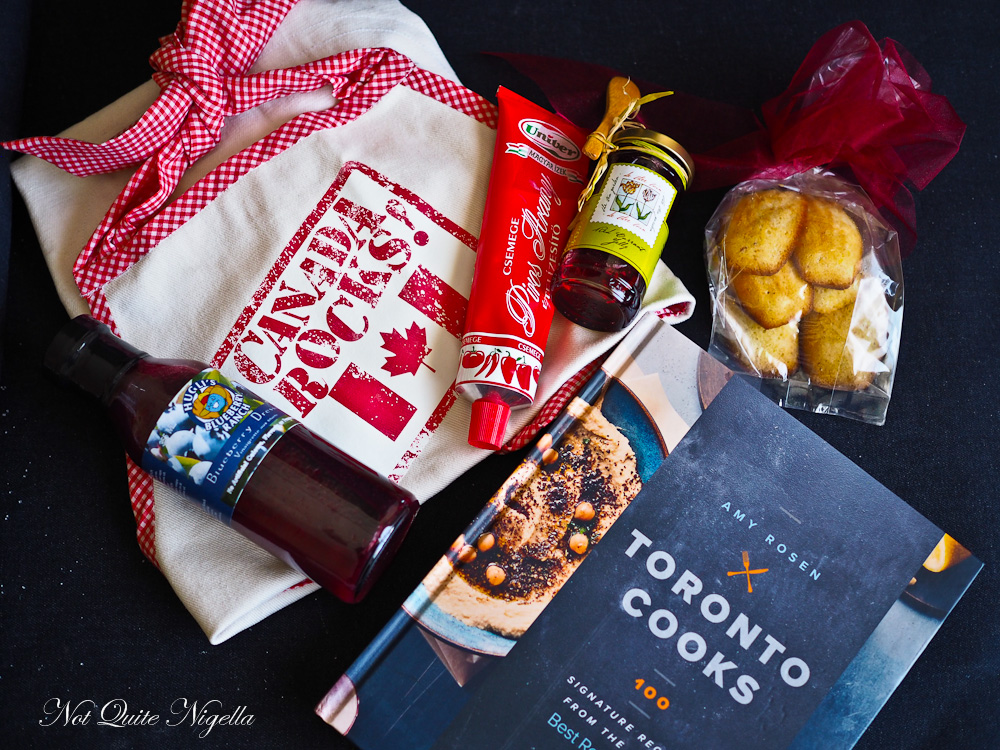 The next lot of gifts are from my lovely friend Eva from KitchenInspirations whom I met up with in Toronto. She is such a generous, lovely soul and spoilt me rotten with these gorgeous items! There are her own madeleines, a Canada Rocks apron, a Toronto Cooks cookbook, Hungarian paprika paste and a blueberry dressing. There's also a redcurrant jelly by her fried chef Trudy Bloem. 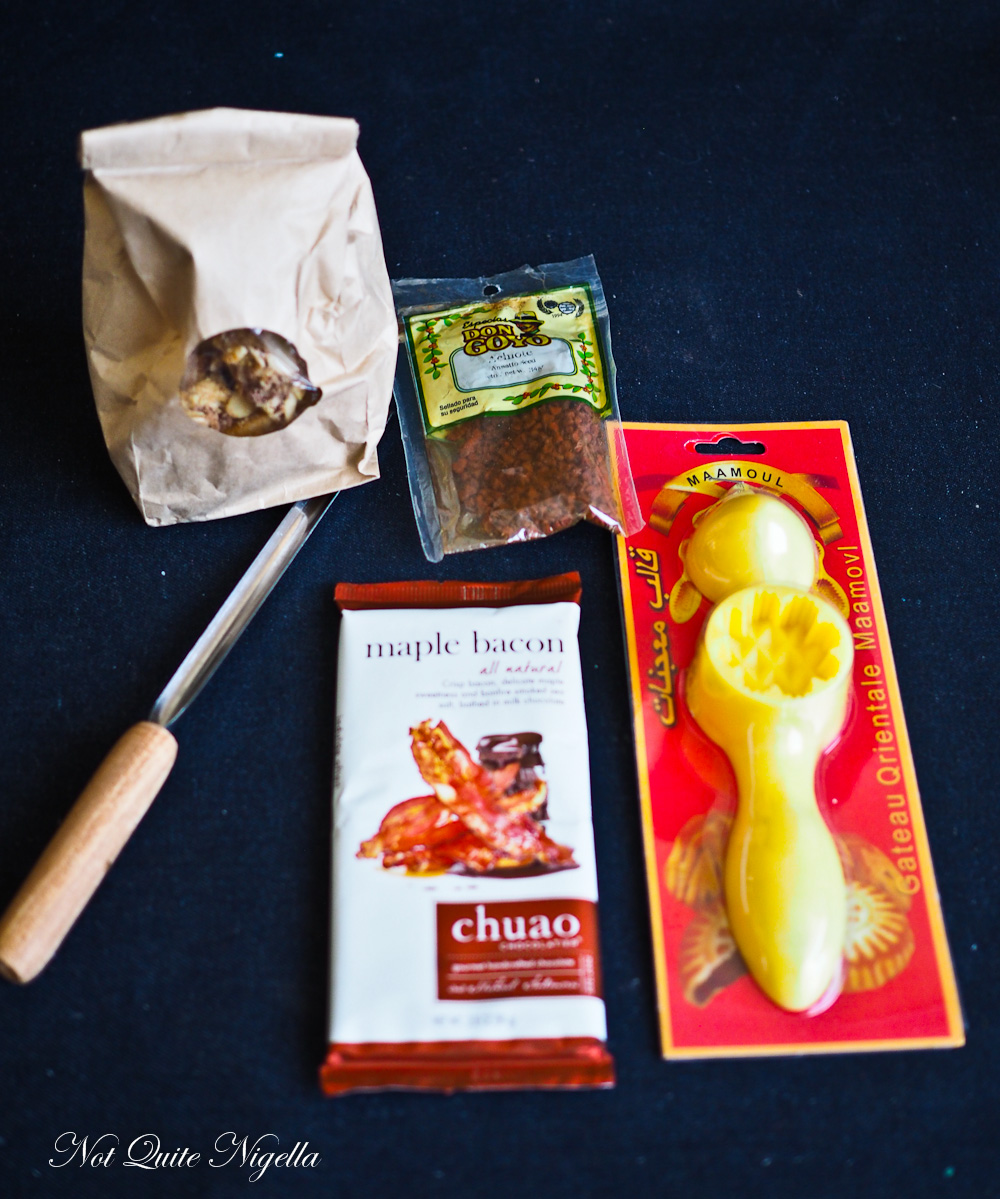 The next gifts are from Trudy and Barb who Eva also invited to lunch. All three were such wonderful company and they gave me really thoughtful foodie gifts and these include Trudi's almond cookies as well as a lemon press, maple bacon chocolate, achiote or annatto seed and a tool that makes stuffed zucchini (to help scoop out the seeds!) from Barb. 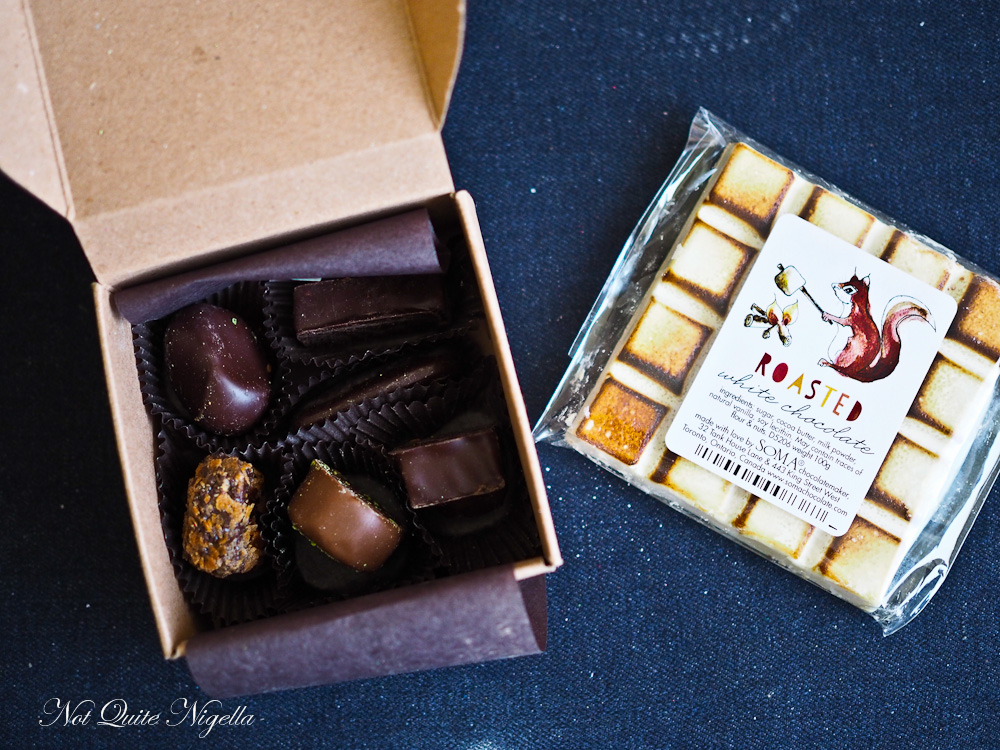 The last items were bought for me by my Toronto host Vicki. They were from a chocolatier called Soma and on the left is a selection of six of their mouth watering chocolates as well as an intriguing roasted white chocolate. The latter has a slighty charred or campfire taste to it and it's very nice indeed! I do wonder how they got it that charred without melting it! Does anyone know? Apparently they use a torch! Maybe that should be my next purchase (I've owned three blowtorches and killed them all). 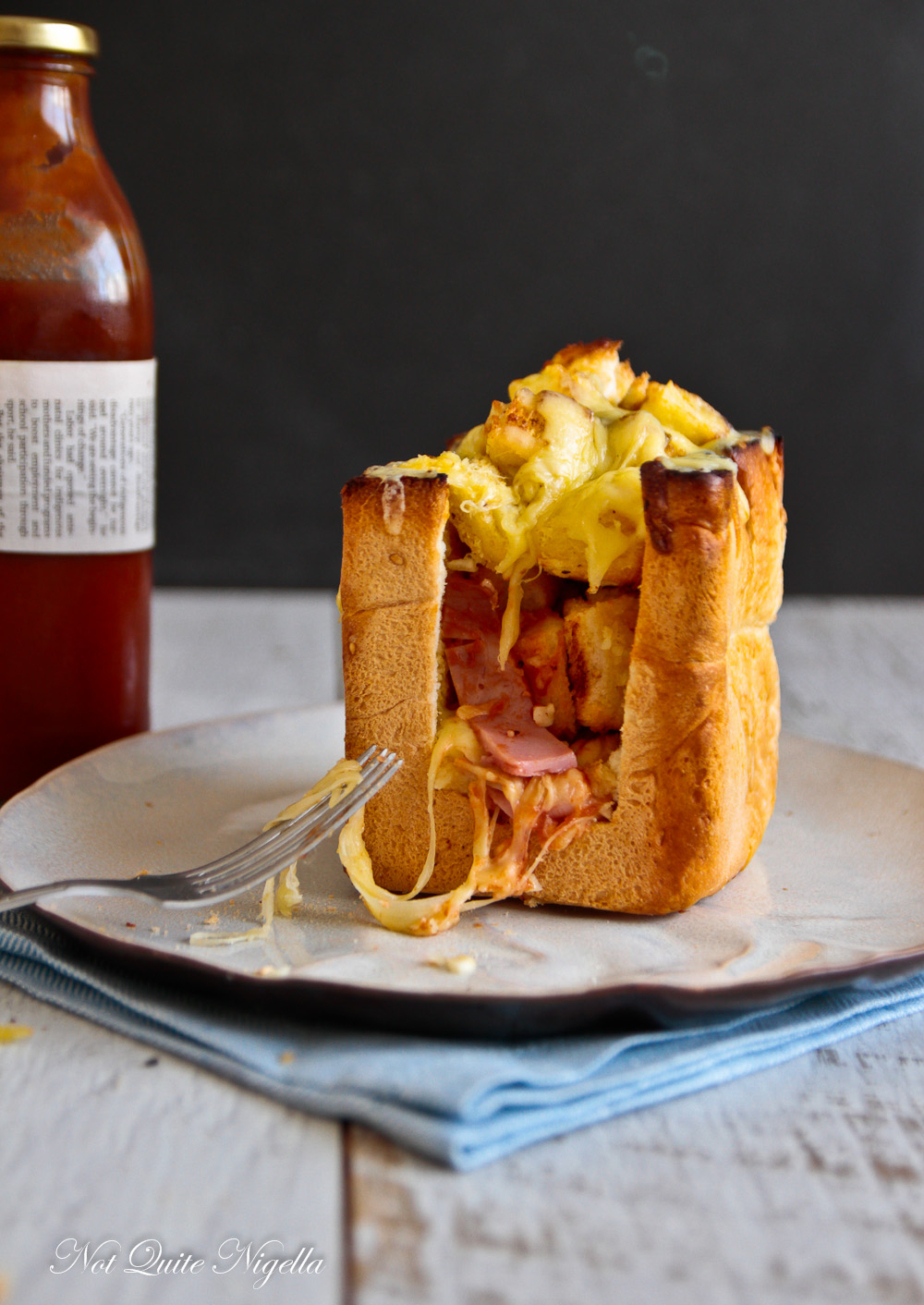 Back to Australia and I've got a possible Father's Day breakfast or brunch idea for you. The original idea for this came from Japan where they make this thing called Brick Toast. It's usually a deliciously sweet affair using honey and chocolate but I wanted to try a version using savoury flavours. It's a very simple idea but it's a fun way to eat a toasted sandwich and it is infinitely adaptable with lots of fillings - you could also do a bacon maple version too!

I know that I've called it Man Toast for Father's Day as it is quite large sized but I have to say that it appealed to me just as much as it did to Mr NQN. I toyed with the idea of calling it "Human Toast" but that sounded a bit gruesome like it involved humans so I kept it as man toast. Sometimes it is possible to over complicate things...

So tell me Dear Reader, have you ever gotten dressed up in period costumes or wanted to? And would you prefer a sweet or savoury version of this? I'm going to do a recipe for a sweet version soon! And what are you doing this Sunday? 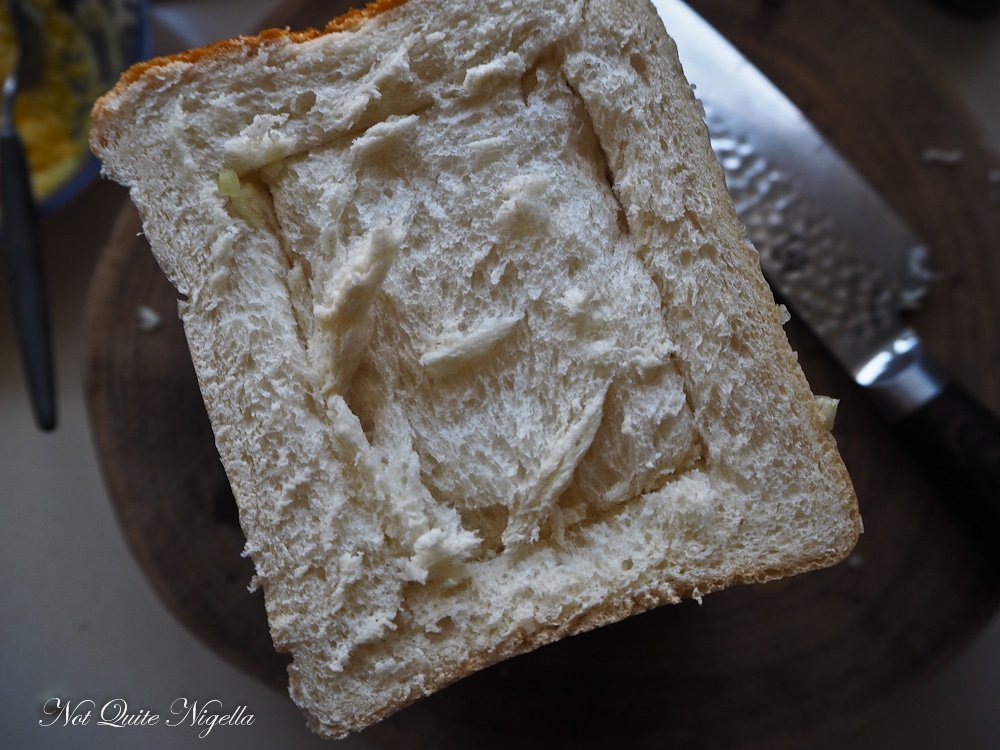 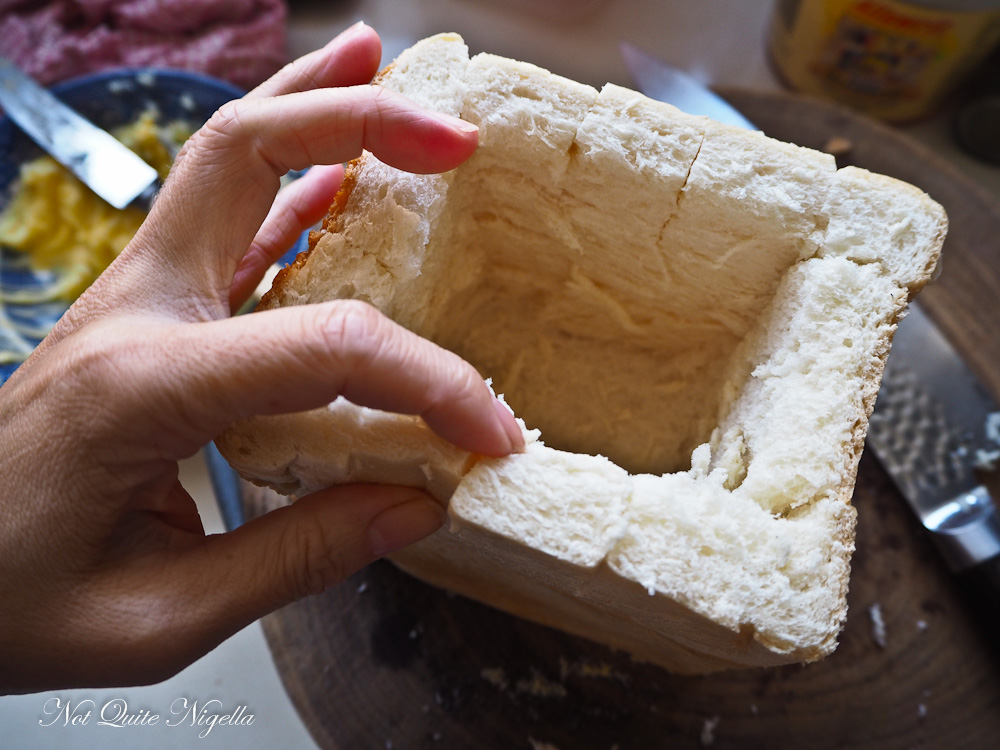 I don't know why I'm fondling the bread here. Oh that's right, I like to touch bread...

*Step 1 - *Preheat oven to 180C/350F. Cut out a centre square of the bread as shown and butter and cut this into cubes. Remove from the centre and cut indents around the outside. This is to make it easier to eat. Butter the sides of the bread cavity and fill with a mixture of the 3/4 of the cheese, all of the ham and all of the sauce. Place in the oven to melt the cheese- about 8 minutes or so. 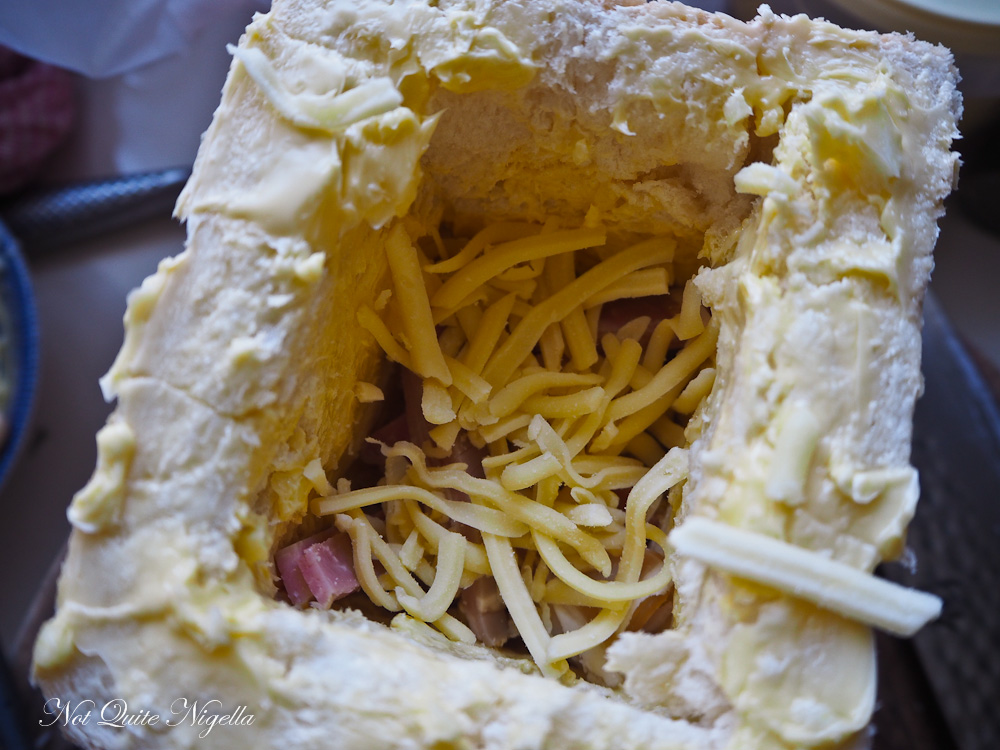 Step 2 - Pile the cubes of bread on top and add the remaining 1/4 of the cheese on top. Place back in the oven to melt the cheese. 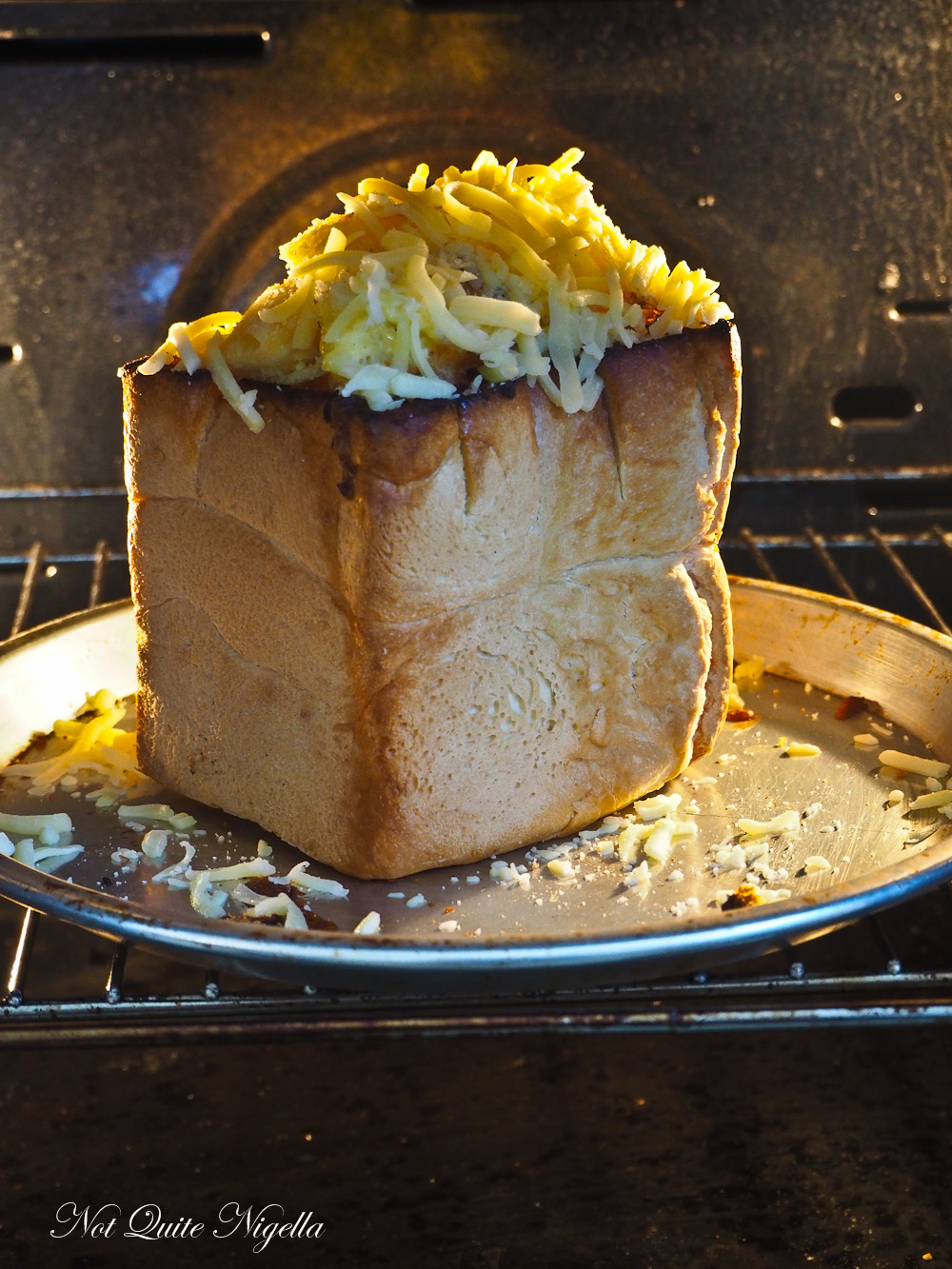