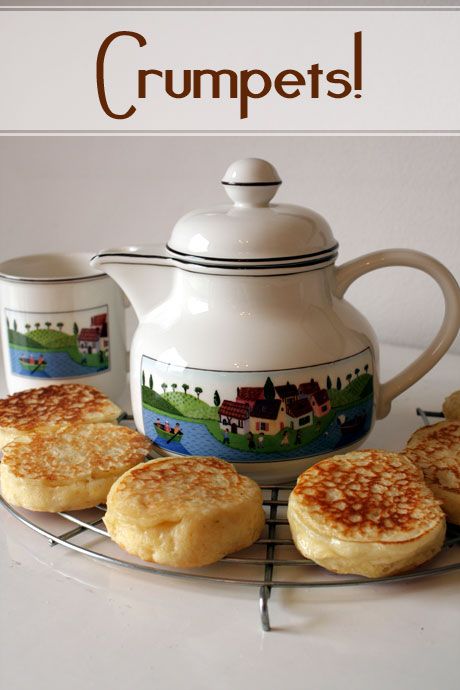 I sat on this recipe for months literally, trying to find an opportunity where I would have two whole hours to make breakfast. Not surprisingly, it took a while to get a chance to do this. I have possums to either blame or thank for this. Either a possum or a small serial killer hiding in the ceiling. I was awoken at 4am by a strange scratching sound. Actually I was woken by my husband who loves to do diving triple back flips in his sleep making the bed seem like a waterbed. And whilst I was trying to get back to sleep I heard an strange scratching sound which scared me. It was definitely in the house so I woke him and he went to investigate _without _a weapon despite me trying to give him one (ok a laundry basket won't offer you much protection). The alarm was still on and after a lot of investigation, we concluded that the scratching was coming from the ceiling cavity.

I was most definitely awake.

And what I like to do when I am woken at ungodly hours is bake. I feel I should at least get a food reward for being up so early. And so I did, with a bit of a false start where I had difficulty dissolving the yeast in the milk. I ended up needing more milk than the 2 tablespoons specified in the recipe and I threw out the greying lump of yeast that I had managed to make and started again with 1/2 cup of milk. The rest was fairly smooth sailing especially once I starting greasing the egg rings. If you eat them straight away, they're divinely fluffy and gorgeously although once they cool they become a bit more traditional crumpets although much fresher. And instead of dripping honey on them, I used a chestnut syrup, made when I did my 4 day stint in foodie rehab, making Marron Glaces. My husband happily wolfed down 10 of them before bypassing lunch. 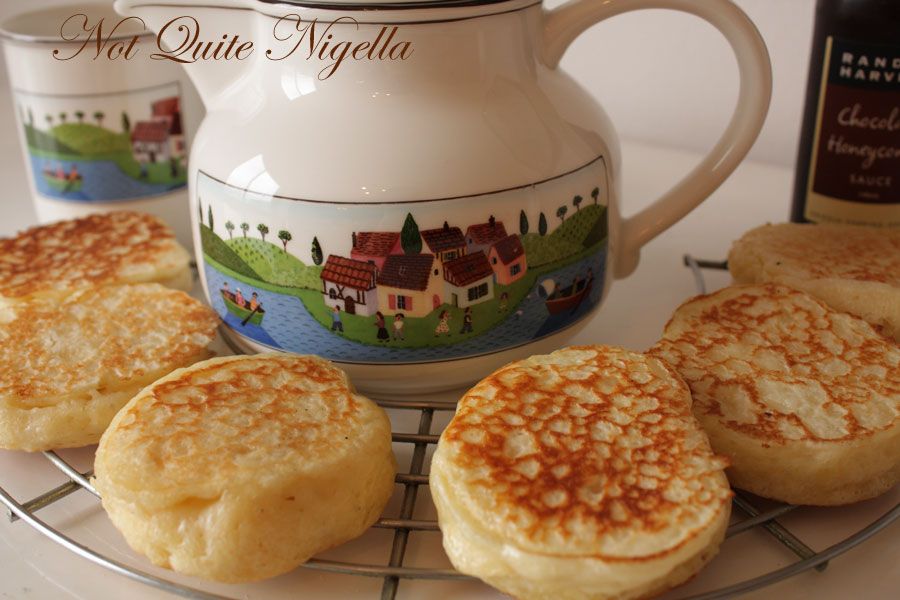 On a related note, we had possums in our previous house, as my father, in a streak of brilliance (not!) stored the bird seed in the ceiling cavity. Yes, seriously.

If you're interested in a bit of background knowledge on Crumpets, Vogue forum member Pinyata who works at the Tip Top factory that makes crumpets had this to say:

I'm working at Tip Top at the moment. And I do believe that Tip Top is the only company to make crumpets in Australia. I'm not really sure why, but there doesn't appear to be anyone else that I can think of.

Now here's a story for you, I'm not sure if it's 100% true, but I'm prepared to make bet that it is. As I mentioned crumpets are notorious for going mouldy very quickly, and this is because they are only partially cooked. Unlike all other baking processes, the top surface of the crumpet isn't heated above 60degC, so it doesn't kill off all the bugs and bacteria that is living in the batter. And to make matters worse, since they are heated, it creates a warm moist environment, which is perfect to harbour the growth of bacteria. So by the time it's packed it already has elevated bacteria levels, and so it doesn't take long for there to be an outbreak, which can be seen as the mould.

This means that they have a very high return rate of mouldy product, which costs the business money. So they put their noggins together and tried to come up with a way people could have the taste and texture of crumpets, but also cook them fully so as to alleviate the mould issue. And this is when the crumpet toast was born. They don't make it on this site, but I think it's made in the NSW site. One of our engineers commissioned that plant, so I'll ask her.

Now the reason why the crumpet toast is the solution, is because as you can see, it's more like a baked loaf of bread. This means that it has been through the ovens and heated to over 60degC and all the bacteria is killed off.

So over the last few years the food technologists would have been scratching their heads and experimenting with a way to come up with a batter that could be baked, and have the same taste and texture as a normal crumpet. I personally think they have done a very good job, since it's very close.

So that's my belief as to why the crumpet toast was invented. Purely to extend the shelf life of the product so that it becomes more profitable. 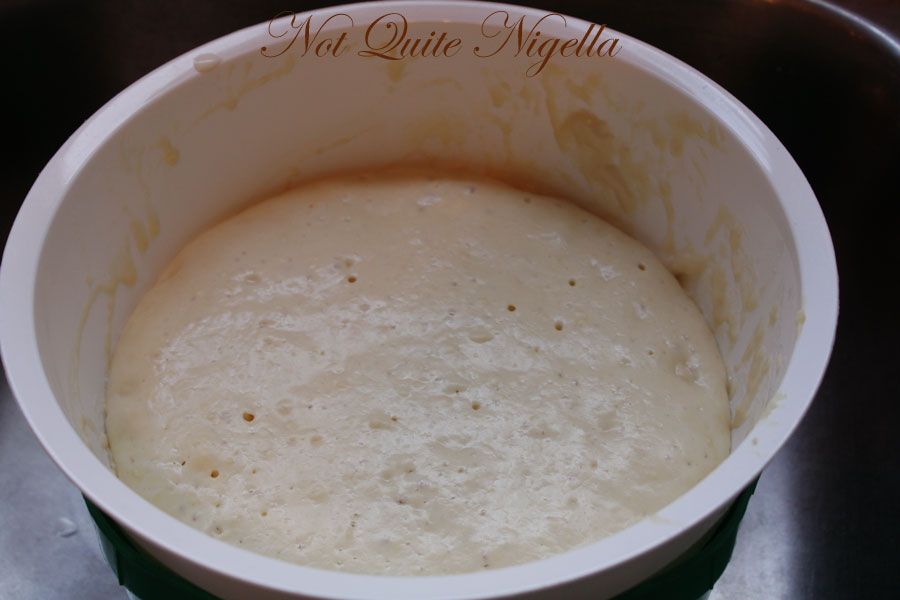 Step 1 - Warm the milk gently sot hat it feels the same temperature as your finger. Too hot and you'll kill the yeast. Dissolve the yeast in 2 tablespoons of the milk (I needed 1/2 cup of milk to do this). Mix the flour and salt and stir i the milk and butter then the yeast. Stir until it's an even, fairly thick batter. Cover and leave to rise about 60-90 minutes in a warmish place covered with a tea towel (since it is cold and there is no warm place or sun at 4am, I placed the bowl in a larger bowl with warmish hot water). It should be bubbly and able to be poured, though slowly. Transfer to a large jug. 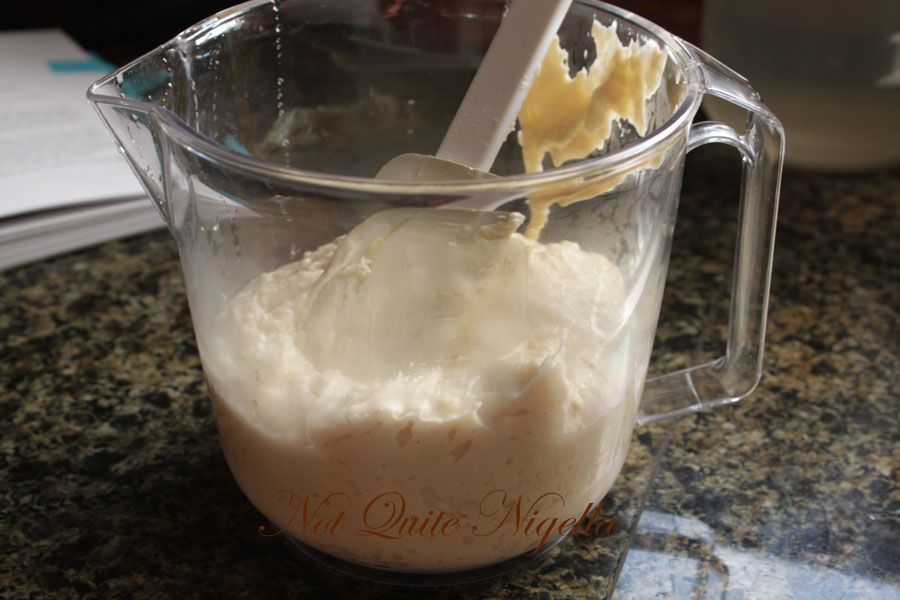 Step 2 - Grease egg rings and a griddle or a large heavy based frypan. A spray oil works wonders but butter tastes a lot better. Heat gently over a medium flame and pour mixture about 2/3 of the way up the egg rings (my mixture wasn't thin enough to pour, more just dollop and spread to the sides). They will continue to rise to don't overfill. Cook for about 6-7 minutes on one side, so the top gets a few holes and has started to dry out, but beware the base doesn't get too dark. A lower heat helps but too low and the bubbles don't form as well. If they're not forming the holes, add a touch more milk to the batter. Remove egg rings and turn over (I prefer to turn and then after a minute remove the egg rings so that they try and stay round as much as possible). Cook for 2 minutes on the other side to brown. 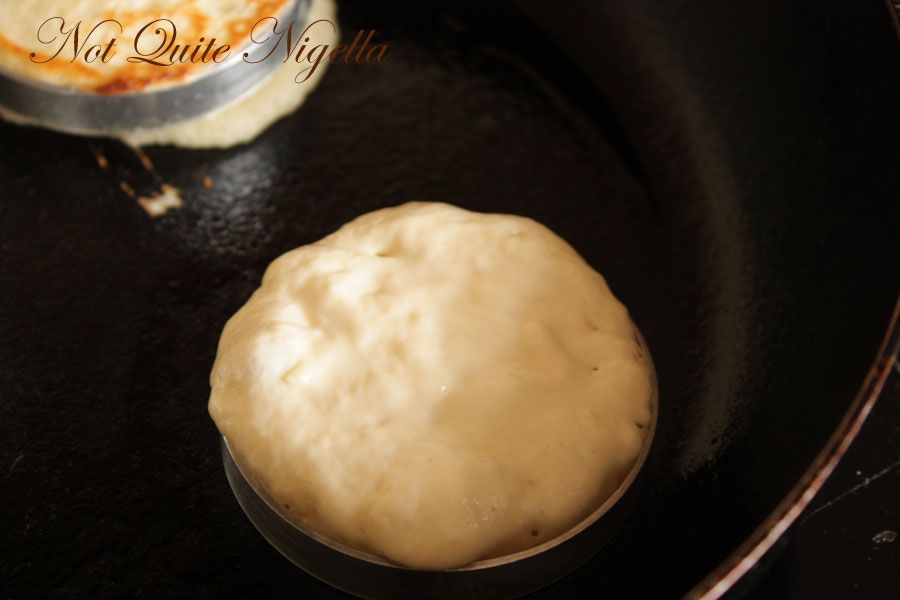 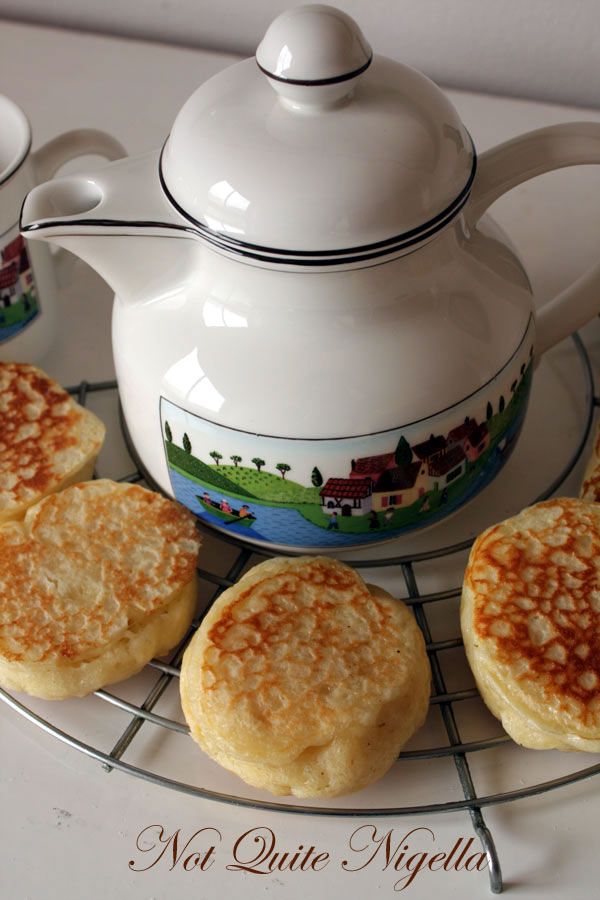