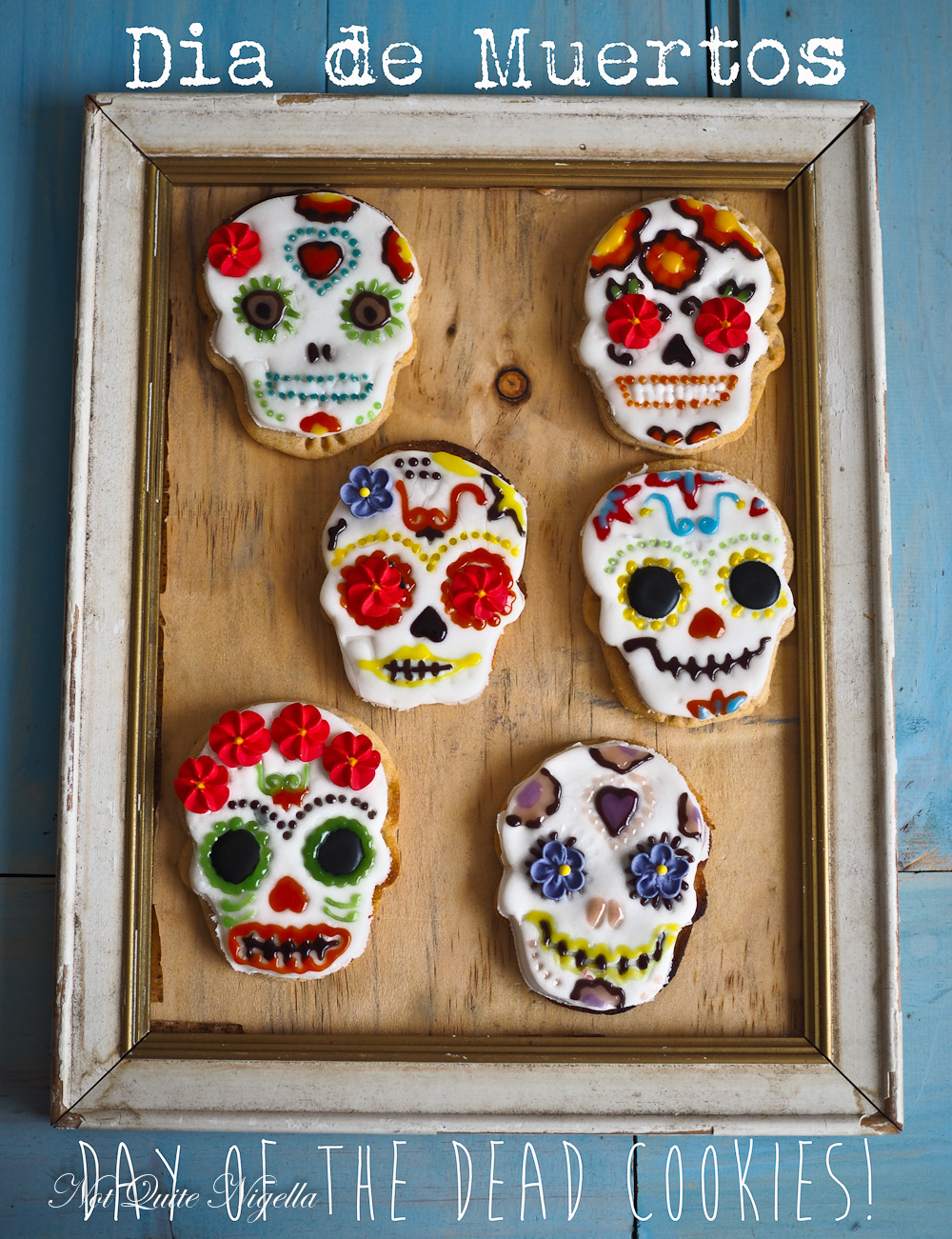 These sweet cinnamon sugar cookies have a touch of the macabre and fun. Colourful skulls are used in the Mexican Day of the Dead or Día de Muertos celebration where loved ones are remembered. These sugar cookie skulls are so much fun to decorate and are a colourful departure from the drab beauty of Halloween.

How was your weekend Dear Reader? Ours was just what the doctor ordered with a mix of social and solitary. On Saturday night we went to Nina and Garth's engagement party. They did a superb job of converting his brother's house in Bondi Beach to a party venue and we enjoyed meeting the friends and colleagues that she had told me so much about and putting faces to stories.

The next time I saw her was the following Tuesday a few days ago. Poor Nina was slightly distressed. "You won't believe what happened with the gifts!" she said. She had told everyone not to buy her a gift but lots of friends had gone ahead and bought her some anyway. "I can't believe that I got so many cookbooks! Arrrgh!" she said throwing her hands in the air. "Why??? I hate cooking!" she said. 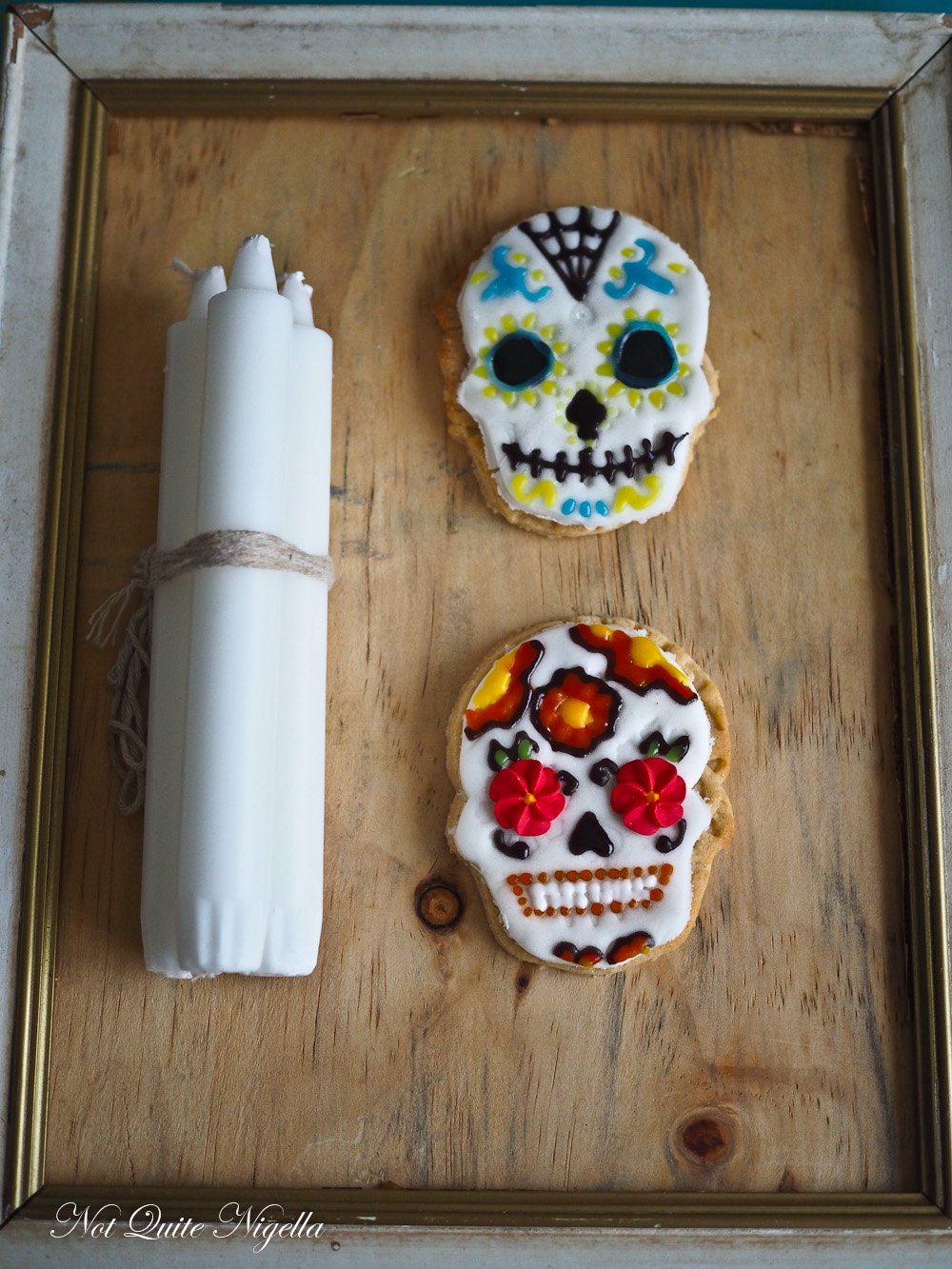 Yep for the non cooking Nina who sees cooking as an absolute chore, the gift of these cookbooks was utterly confusing. What did her friends mean by it? Perhaps they were food lovers armed with only the best of intentions and they were trying to get her to see the fun side of cooking. I'm not sure but Nina remained nonplussed.

Among the half a dozen cookbooks she was given there were a couple that she liked but there was one that featured a big boned gentlemen looking at the camera with a lascivious expression holding some food. "Why would they think of him when they think of me?" she wailed. Nina is whippet thin and eats only air and vegetables so she wasn't sure how to take the cookbook choices. 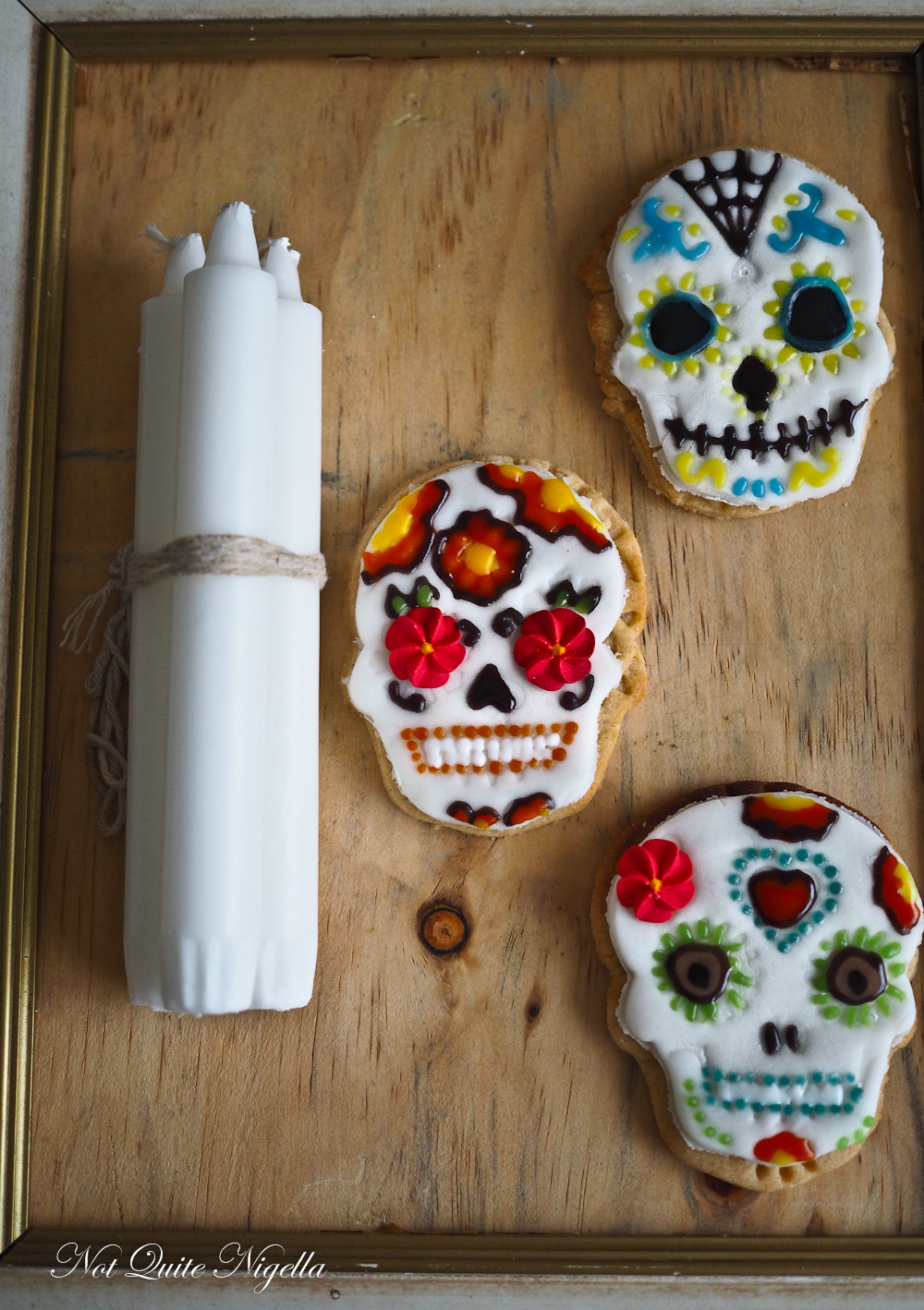 If I were trying to get to Nina's heart I would give her a skull. I only know this because she trains me at her apartment when it is raining and I have seen her collection of skulls. She has many colourfully decorated ones that she has bought for herself and received as gifts.

Which brings us to that most wonderful time of the year again Dear Reader and as always I will be throwing a Halloween party! And these cookies are my first recipe! I was given some skull cutters by not one but two friends: Rebecca and Gaynor. You see they know me so well and chose the most perfect gift! To make a cookie version of Calaveras or sugar skulls! 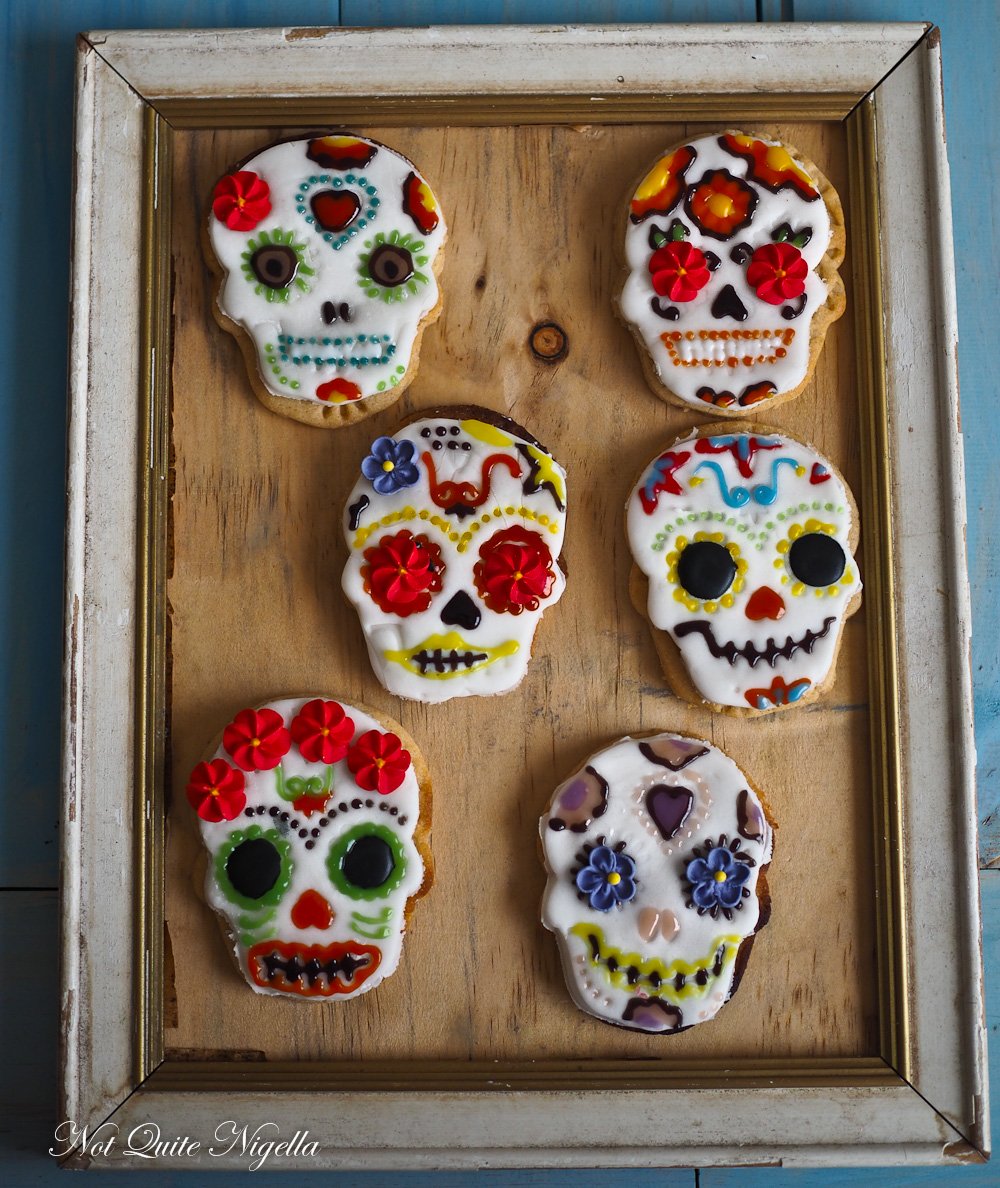 Día de Muertos is the Mexican Day of the Dead and begins on Halloween (the 31st of October) and ends on the second of November. It is observed as a public holiday in Mexico to celebrate and remember the lives of those that have passed. People sometimes put out their dear departed's favourite foods and drinks to encourage a return visit and it actually sounds like a wonderful celebration of a loved one.

Once you have the cookies baked the decorating part is really fun. Just cut some fondant on top and then take out your decorating pens and draw! I started with the eyes and branched out from there. I also stuck some sugar flowers on top. And a little tip: brighter colours are best for these Día de Muertos cookies!

So tell me Dear Reader, since Halloween is on a Saturday night this year, are you going to do anything for it? Are you good at guessing what friends would like for gifts?

And here's a quick 2 minute video on how to decorate these cookies! Sorry for the rush job but I only finished these late yesterday afternoon! Forgive me? :) 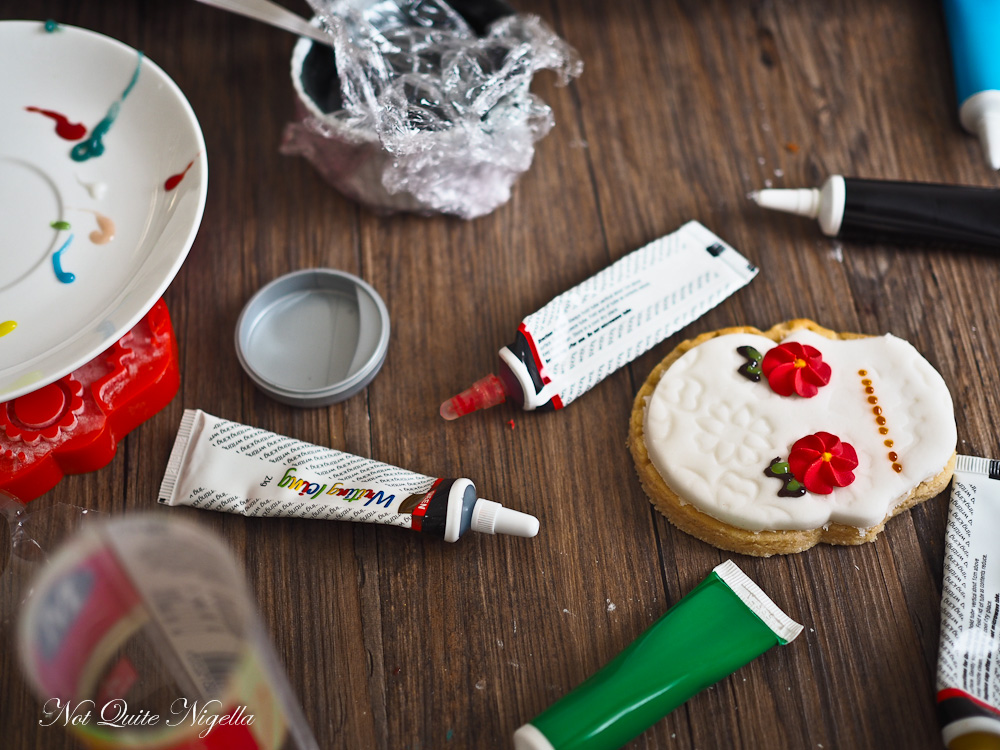 Step 1 - Beat the butter and sugar together until fluffy and light. Add the egg and vanilla and beat to combine. On the lowest speed mix in the cinnamon and flour. Form into two balls and place on a sheet of cling film. Flatten down the balls slightly and refrigerate for 1-2 hours or overnight.

Step 2 - If refrigerated overnight, take the dough out of the fridge about 20 minutes before you want to roll it. Line two baking trays with parchment. Roll out the dough between two sheets of parchment and cut out skull shapes. Refrigerate dough for 30 minutes. 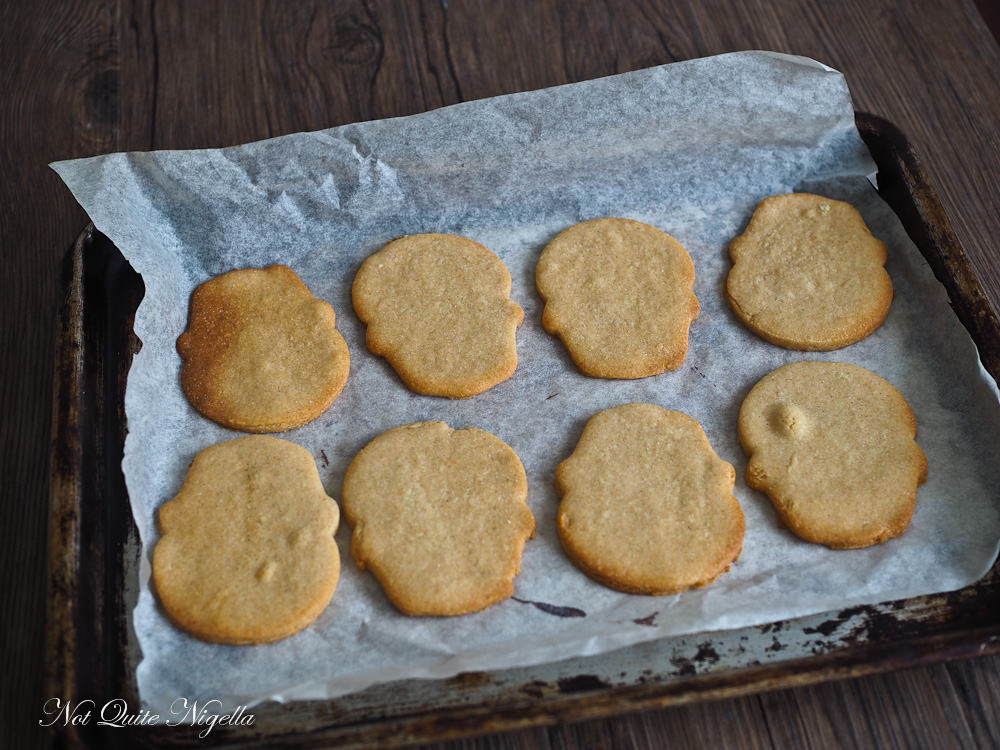 Step 4 - Sprinkle some cornflour/cornstarch on a non stick board. Cut out white fondant skulls using the cookie cutter. These ones (by the brand Fred) also had a guide for the patterns but I don't think the actual cutters were sharp edged enough. Adhere these to the cookie with a little water on a paintbrush. 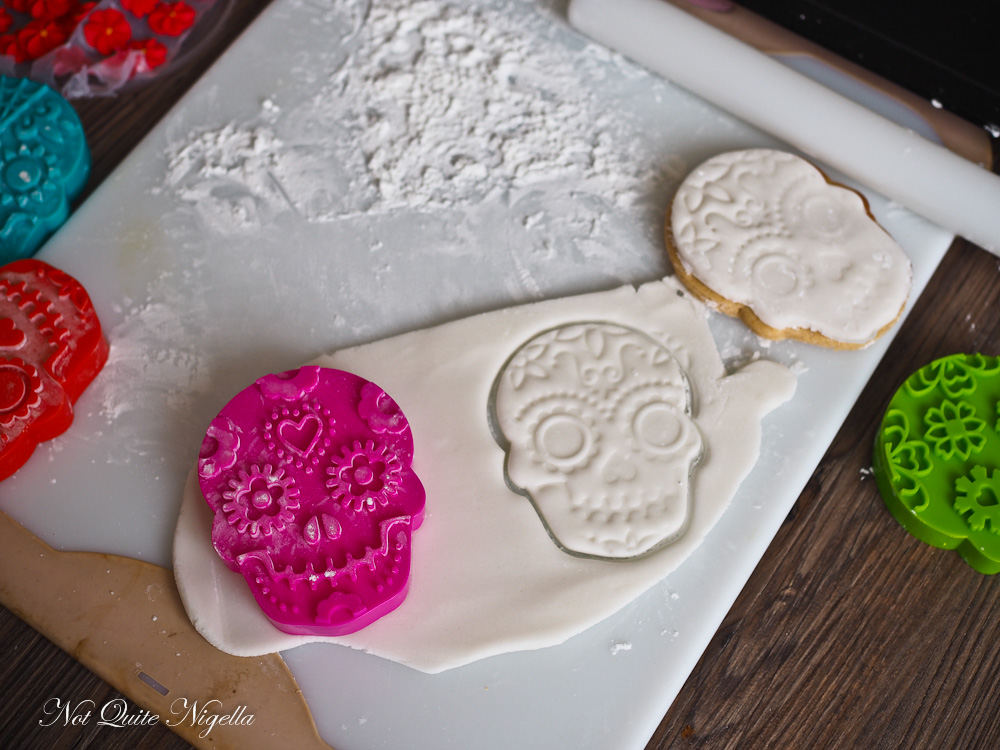 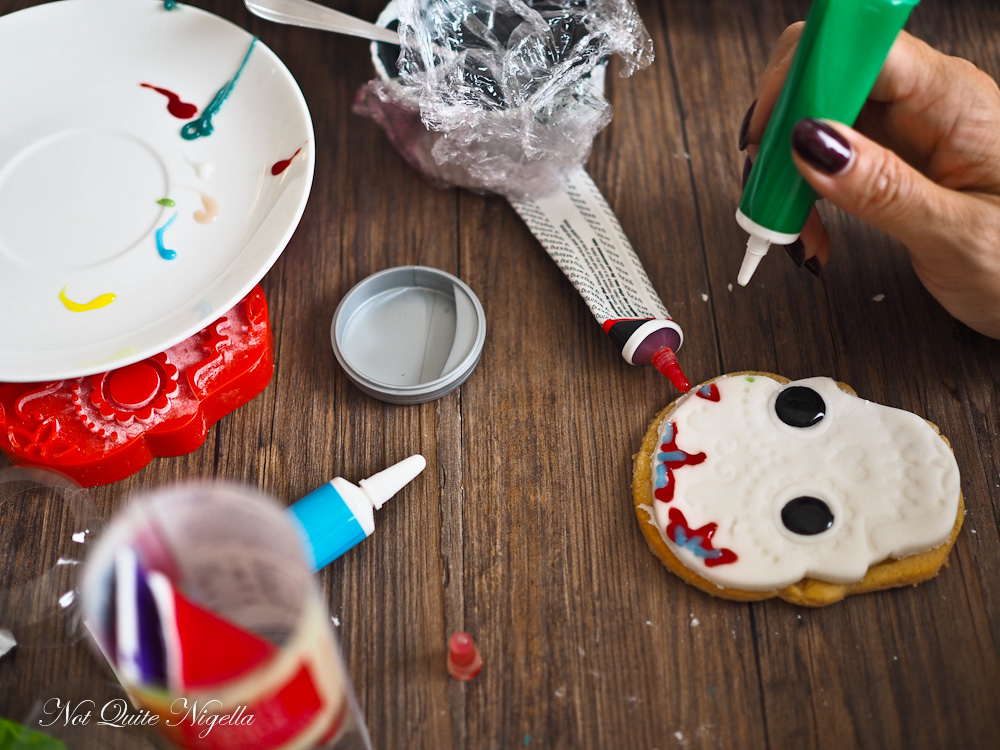