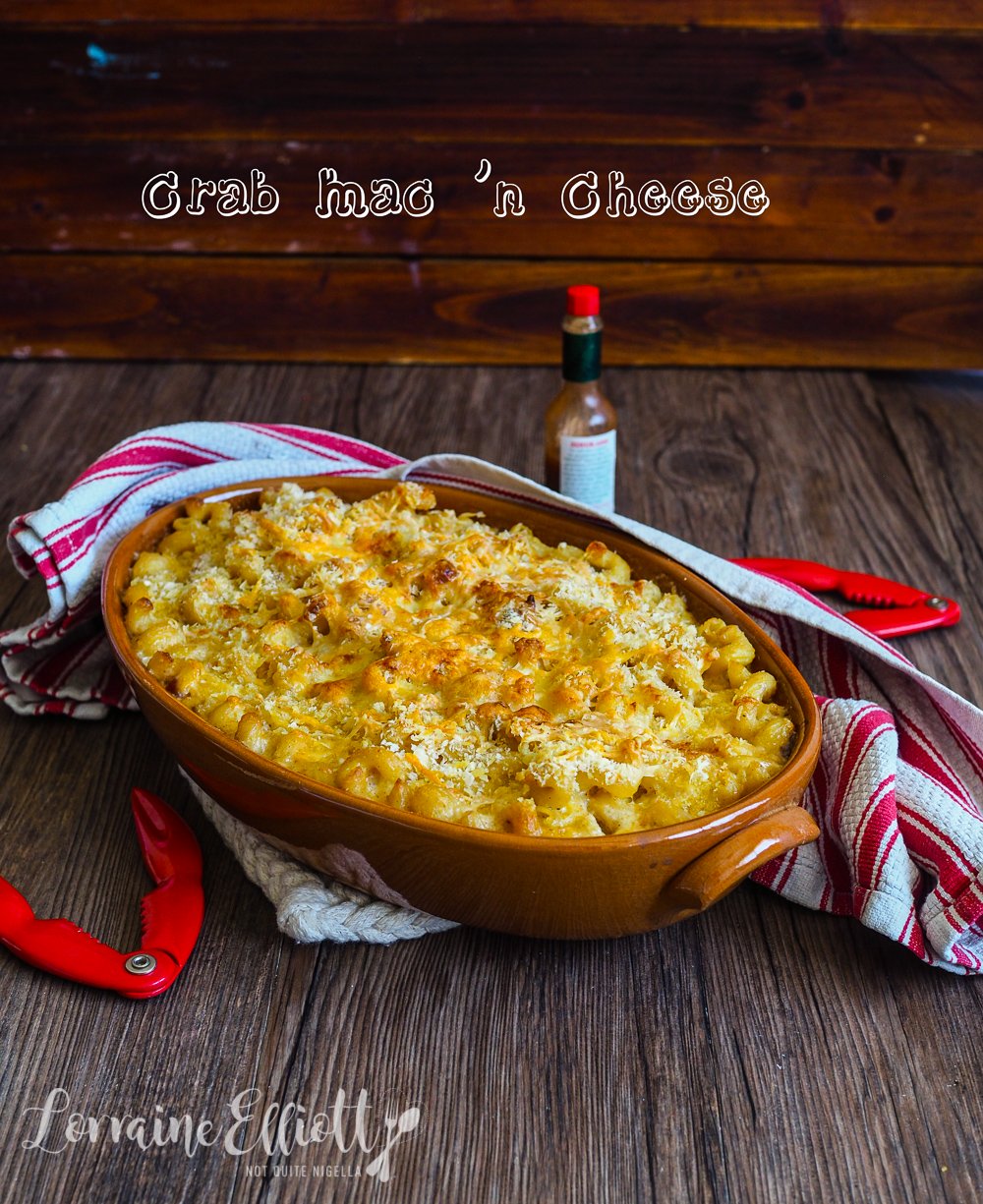 This mac and cheese is everything you want mac n' cheese to be. Creamy, velvety and smooth cheese sauce envelops corkscrew pasta. Pieces of crab and Old Bay season this and a crispy layer of panko breadcrumbs and butter on top finish it off.

I'm going to admit something that might offend some mac and cheese lovers. I find most mac and cheese bland. I guess I don't have the nostalgic memories of growing up eating it to fall back on. But to me, whenever I order it out, it's either delicious or bland. It's like Goldilock's porridge: when it's good it's sooo very good but when it's bad I'd ignore it.

My lovely friend Monica from Lulu's gave me this recipe. She emailed the restaurant Sorry Charlie's Oyster Bar in Savannah where she ate it at and they gave her steps and ingredients but not quantities which is understandable. Monica passed it onto me because she is a darling. She is Italian American Australian, i.e. she grew up in Italy and America but now lives in Australia. 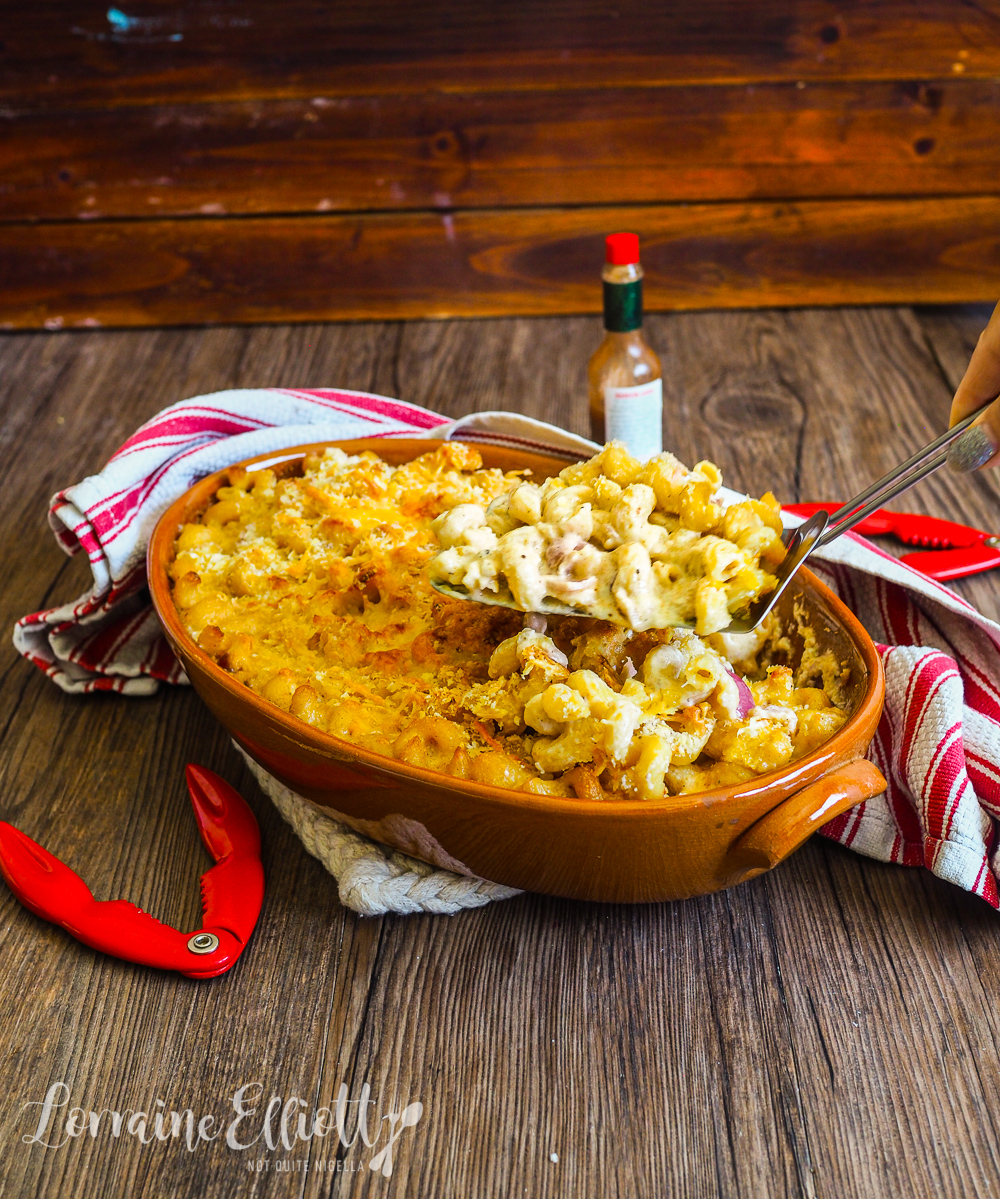 Speaking of American friends who now live in Australia, I mentioned before how one weekend Ivy and Ryan went to watch Mr NQN windsurf. Perhaps I'm a bad wife (entirely possible) but I never considered going to watch him because I did that once and was thoroughly bored. But since Ryan in particular was interested, Mr NQN suggested that we go out and watch the 18 foot skiffs sailing in Double Bay. There is a ferry that takes spectators out so he set up a date and booked tickets. I had so many questions: Can we bring food? Can we buy food? Food, food and food!

We were bestowed with a glorious Sydney day. One where you say to yourself "We live in the most beautiful city". Mr NQN knew quite a few sailors having sailed this class for a few years. We boarded the ferry and it started off well and then I started to get a bit sea sick from the motion and fumes (and then it came flooding back to me another reason why I never liked watching him sail). Then there was a very creepy guy that was taking photos of us who then came over and sat next to us and stared at us like we were specimens at a zoo. I was feeling nauseous on two levels at that stage due to the boat and el creepo. 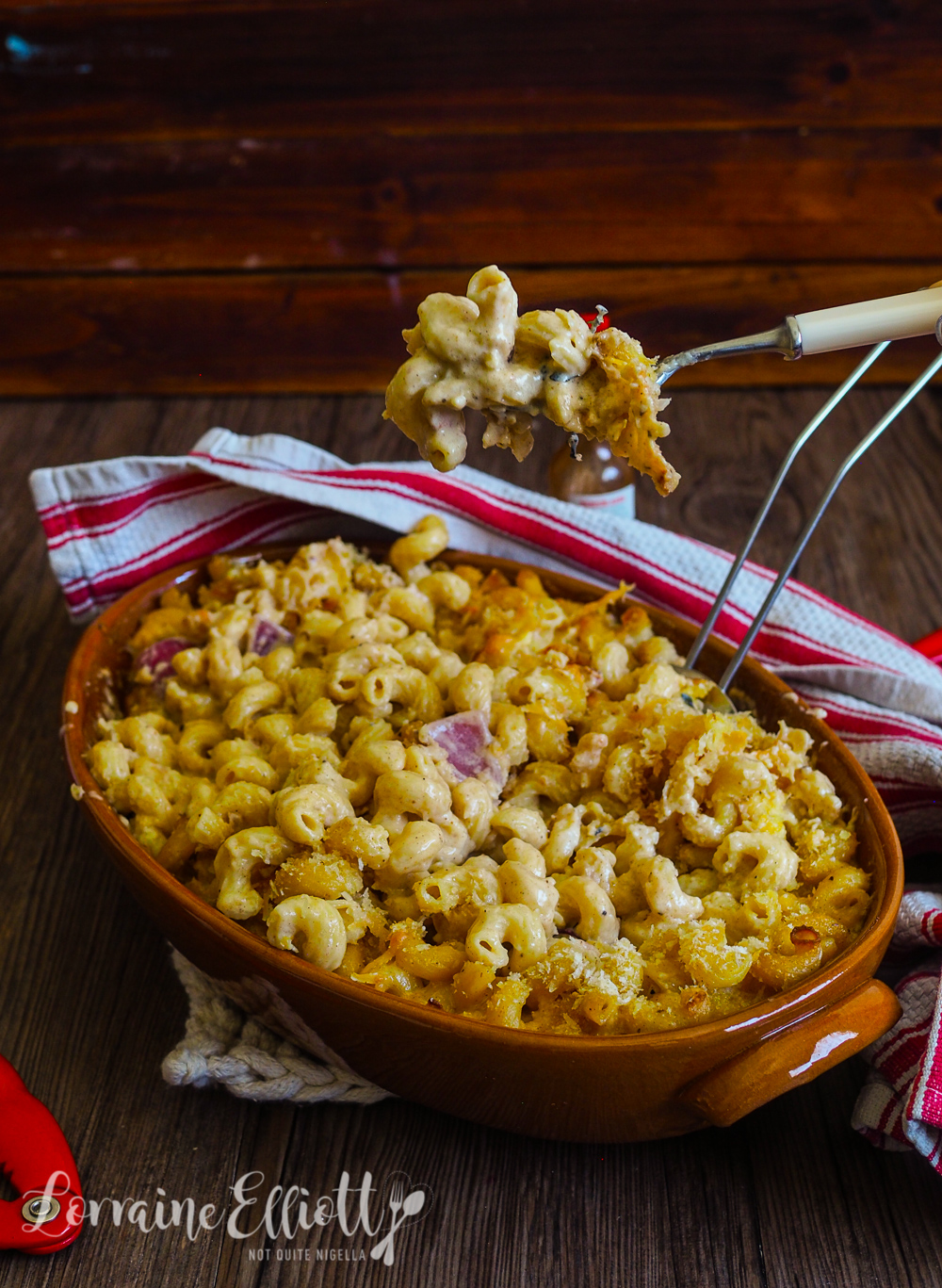 Ivy, being a good girlfriend quickly directed me downstairs. He didn't follow (well for a while) but downstairs had fresh air with wide open windows. It was also the seventh circle of hell with guys bellowing and making an almighty noise placing bets on the winner. "I remembered why I hate watching sailing... because you can't get off" I moaned to Ivy in between sips of ginger beer. Kids screeched at the highest pitch and there was testosterone thick in the air. The most popular place was away from this cacophony at the front of the boat where there was not a single place to stand. Clearly others were trying to get away too.

When it was mercifully time to get off we sat down in the club and ordered drinks and halloumi fries and just enjoyed being on land without being screamed at or being perved on. And then Ivy and Ryan being ever so gracious thanked us for a great afternoon. "Shug, I appreciate you being gracious and all but that was literally hell on earth," I told her. You have just got to love polite Americans don't you?

So tell me Dear Reader, do you like mac and cheese? And have you ever felt trapped on a boat? 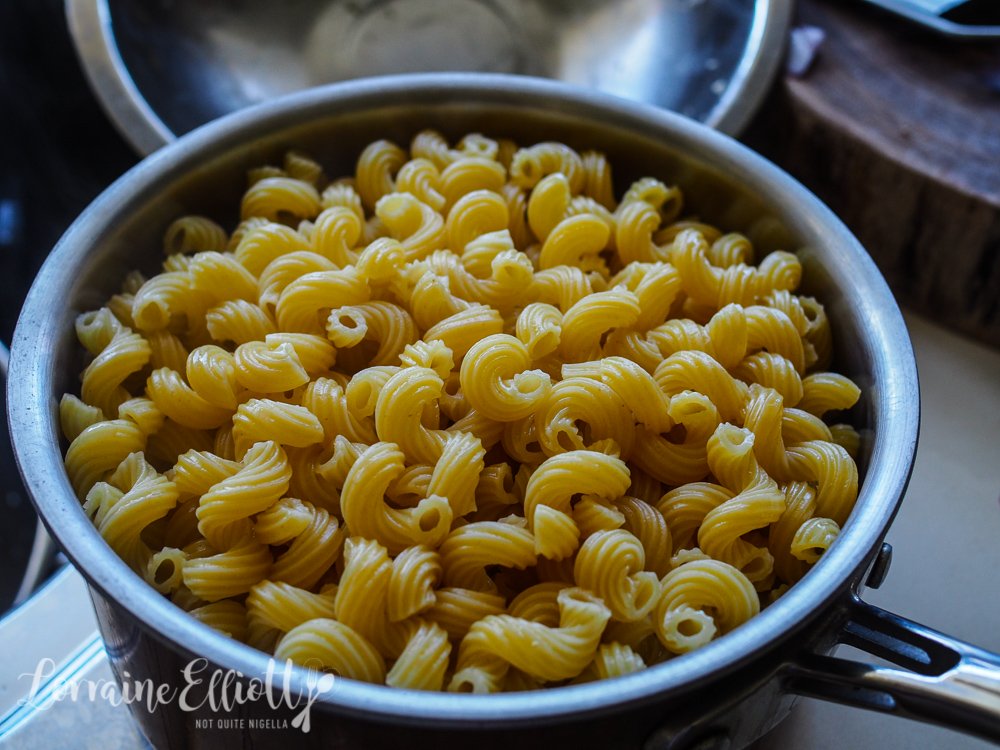 Step 1 - First make the cheese sauce. Heat a large cast iron pot to medium heat and add the butter and melt. Add the flour and stir and cook for 30 seconds or so. Then add the cream and milk and stir until it thickens. Add the onions, Old Bay and stock powder. Then add the cheeses and chilli sauce and then season to taste with salt and pepper. You want it quite seasoned because the pasta will dilute the flavour. 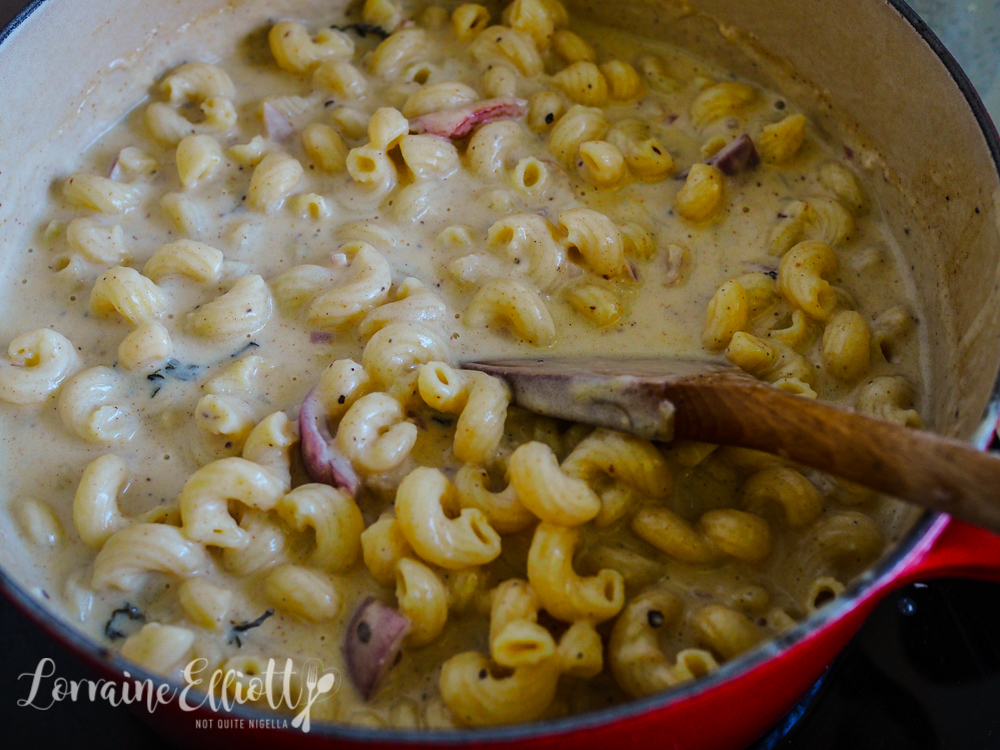 Step 2 - Preheat oven to 180C/350F. While it is cooking, boil the pasta in plenty of salted, boiling water until al dente. Do not overcook as this will go into the oven to cook further. Stir in the crab meat and scoop into a baking dish. Sprinkle with breadcrumbs, mozzarella and butter cubes. Bake for 30 minutes. 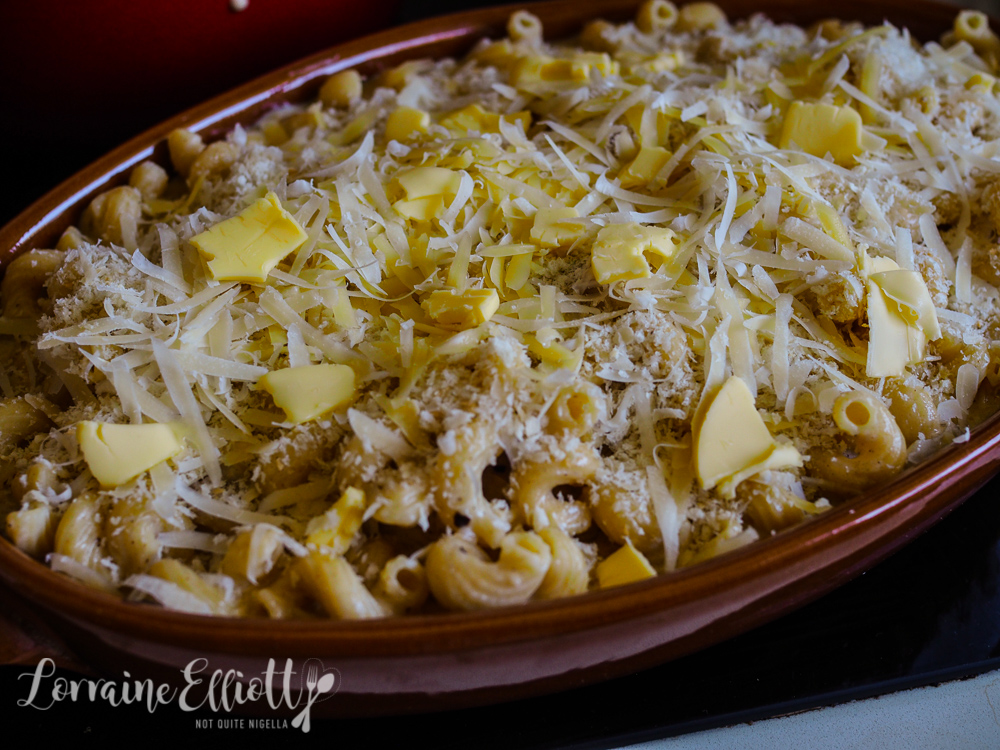 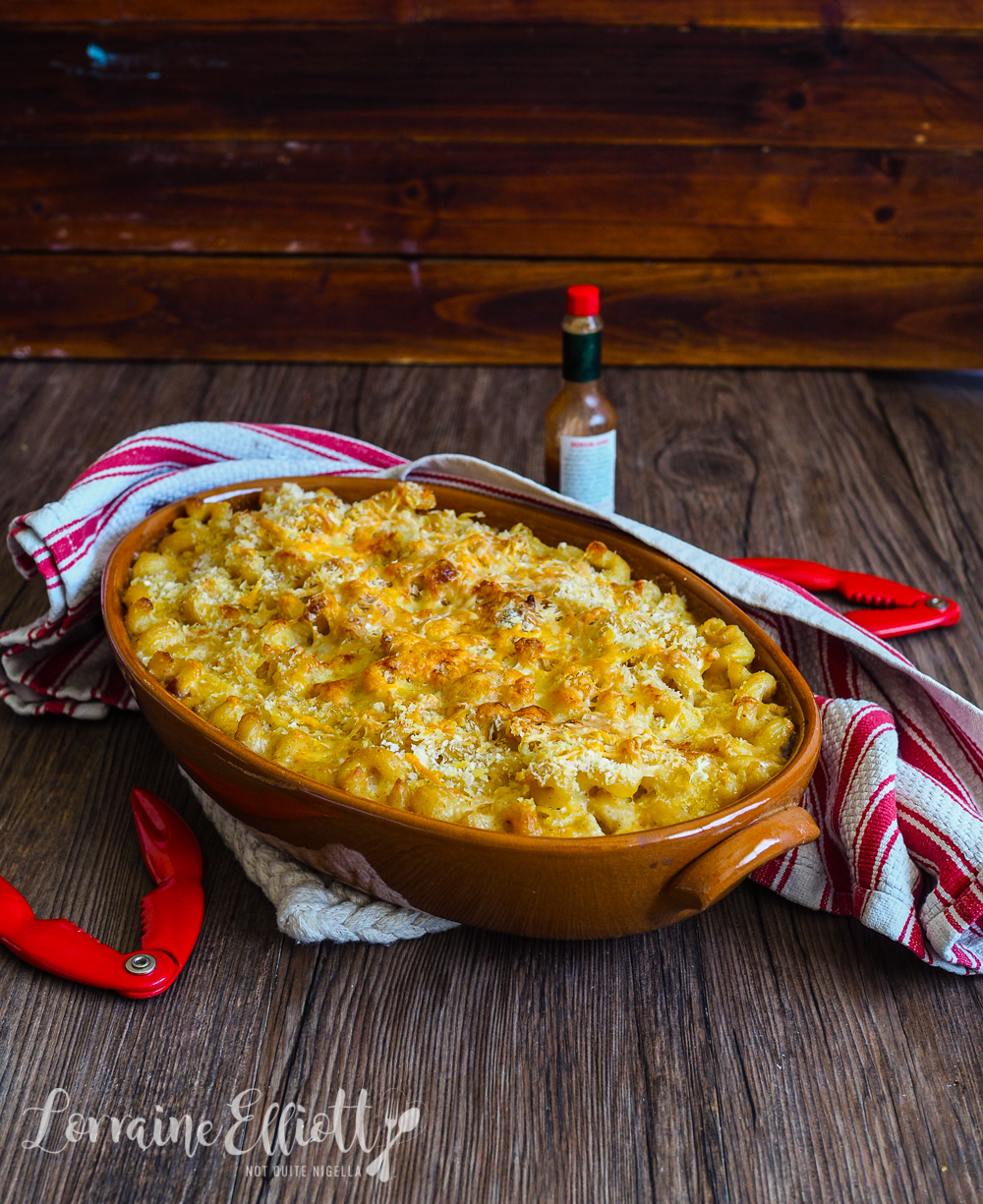