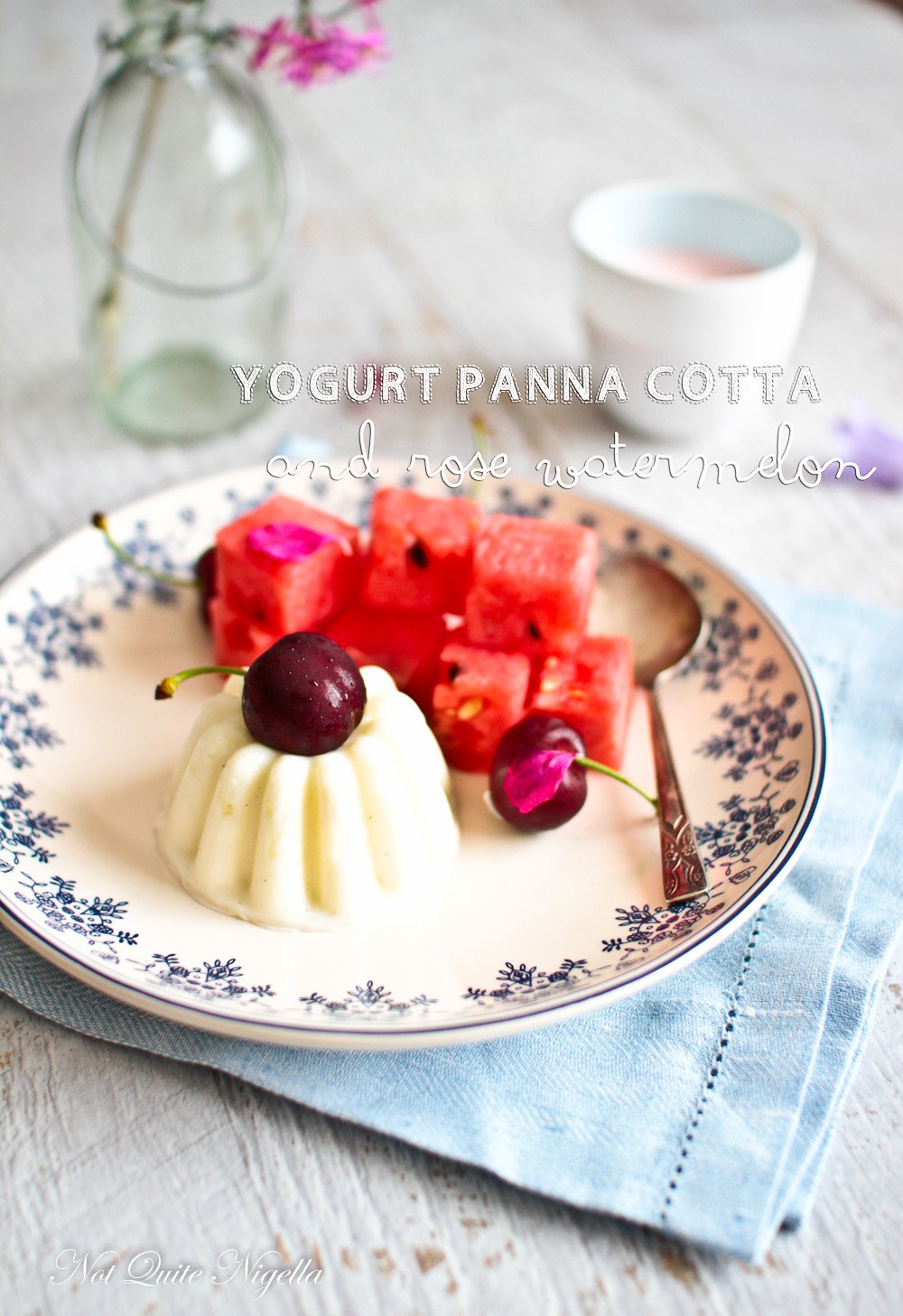 Although this looks and sounds like a dessert, this yogurt panna cotta could easily double as a refreshing weekend breakfast. It's a simple idea: infuse a yogurt panna cotta with vanilla and then pair it with rose syrup splashed watermelon cubes and fresh cherries!

You see Queen Viv had given the speed dating scene a red hot go. She's not quite ready for Tinder so she decided to do face to face speed dating. The only problem was that the men that she met were way too cold and conservative for this free spirited woman and she ended up meeting two women during the night and they had so much in common that they decided to give the men a miss and go away on a weekend together! I'm sure much wine was imbibed while regaling tales of bad dates. 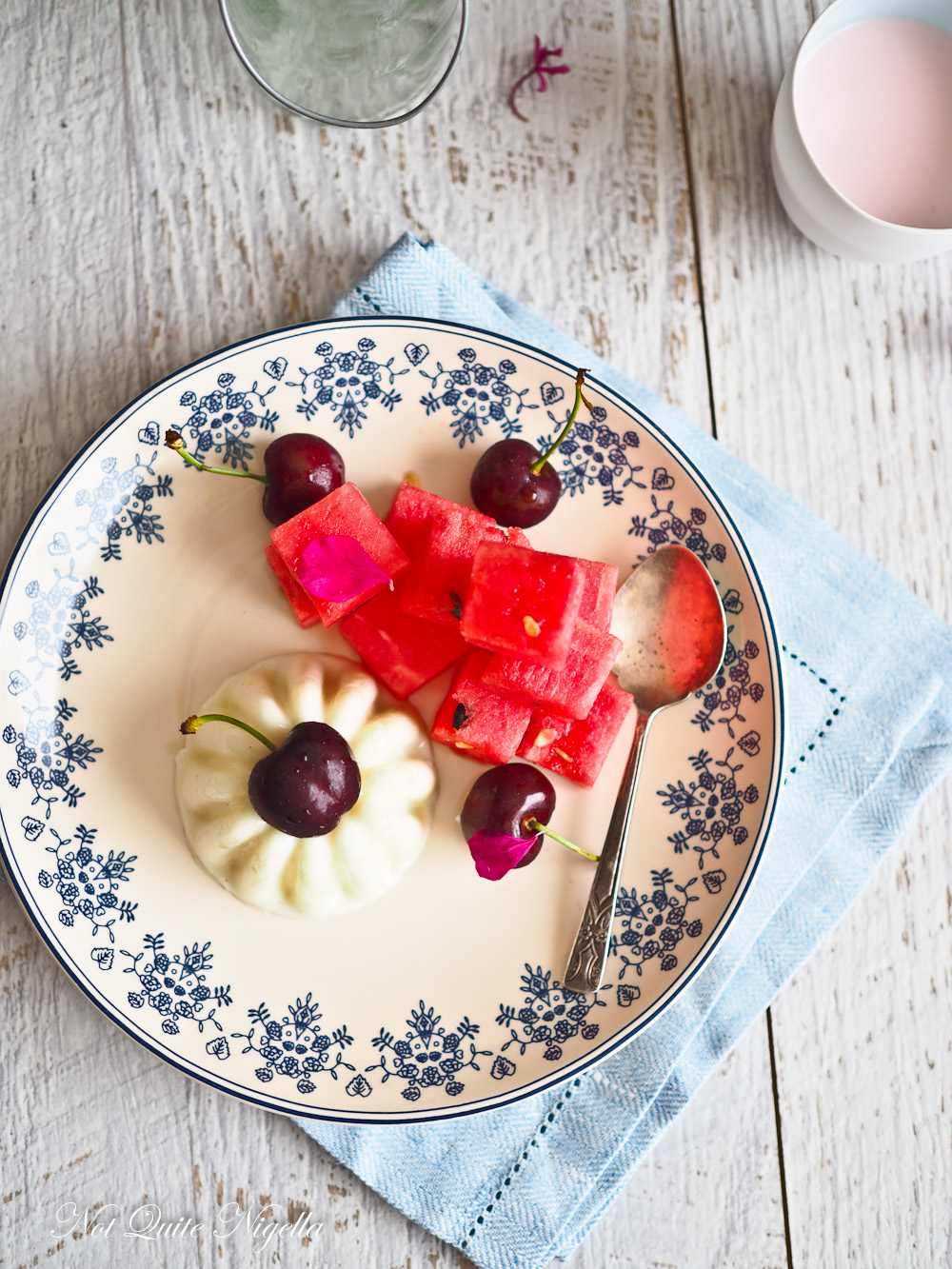 Whenever I make panna cotta I think of Queen Viv because I know that she absolutely loves this dessert. In fact she served us a coconut panna cotta once and we loved it so much she loaned me the molds to make them in too. I've since then bought my own panna cotta molds (although they're nothing as pretty as hers) and I decided to make a fancy breakfast type of dish.

You can make this using cream but as I had had something similar for breakfast I decided to change the panna cotta to a yogurt base. This delighted yogurt monster Mr NQN who was known when I first knew him to consume a 1 kilo (2.2lb) tub for dinner. The watermelon takes on an almost Turkish delight quality with the rosewater and it's a pretty alternative to yogurt and fruit for breakfast!

So tell me Dear Reader, what do you have for breakfasts on the weekend? Do you go out or stay in? Are they a bit more elaborate than a week day breakfast? And could you ever eat 1 kilo of yogurt for dinner?

Makes 4-6 individual panna cottas (depending on your size of mold, total approximately 2.5 cups)

Step 1 - Heat the cream or milk in a small saucepan on medium heat and add the sugar and vanilla. When warm but not boiling, sprinkle the gelatine on top so that it melts into the mixture. Whisk until smooth and remove from heat. Allow to cool and add the yogurt (don't add it while it is hot or the yogurt may split). 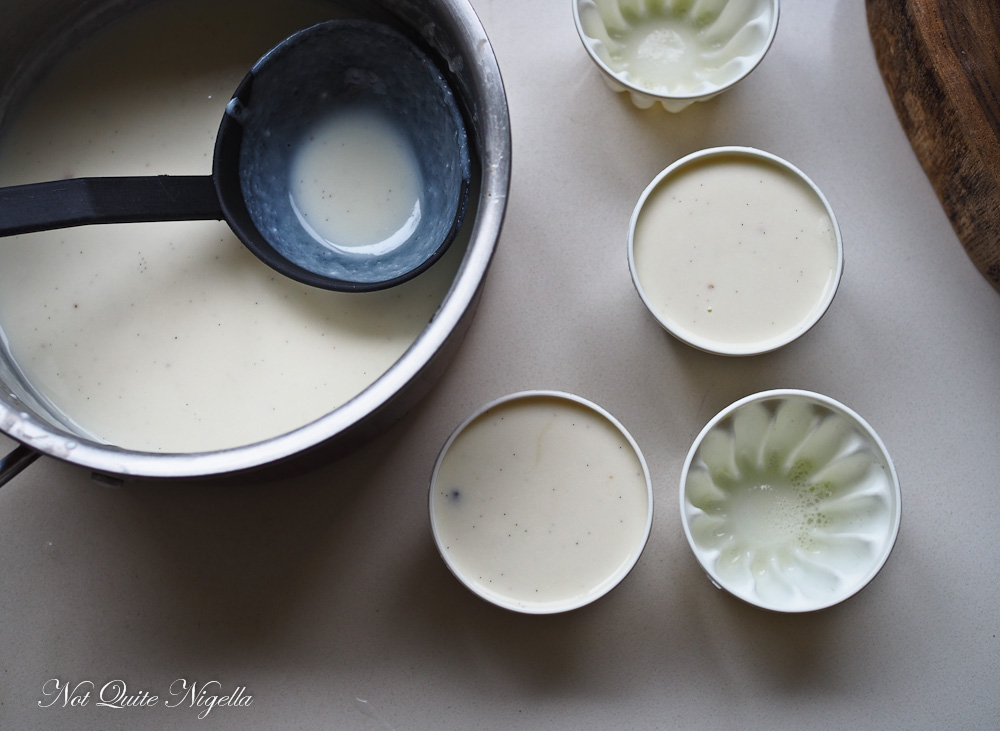 Step 2 - Oil some panna cotta molds-you'll end up with just over 2 cups' worth of liquid so it depends on how big they are. Pour into the molds and allow to set in the fridge for 2 hours.

Step 3 - Mix the icing sugar with the rosewater and sprinkle over the watermelon and toss. Place in the fridge to infuse until the panna cottas are set.

*Step 4 - * Run a knife around the edge of each panna cotta mold and gently place the bottoms of the molds under hot water to loosen for 10 seconds or so. Unmold onto a plate and then serve with the rose infused watermelon and cherries.