Indu, Sydney CBD: Indian Food As You've Never Had It Before 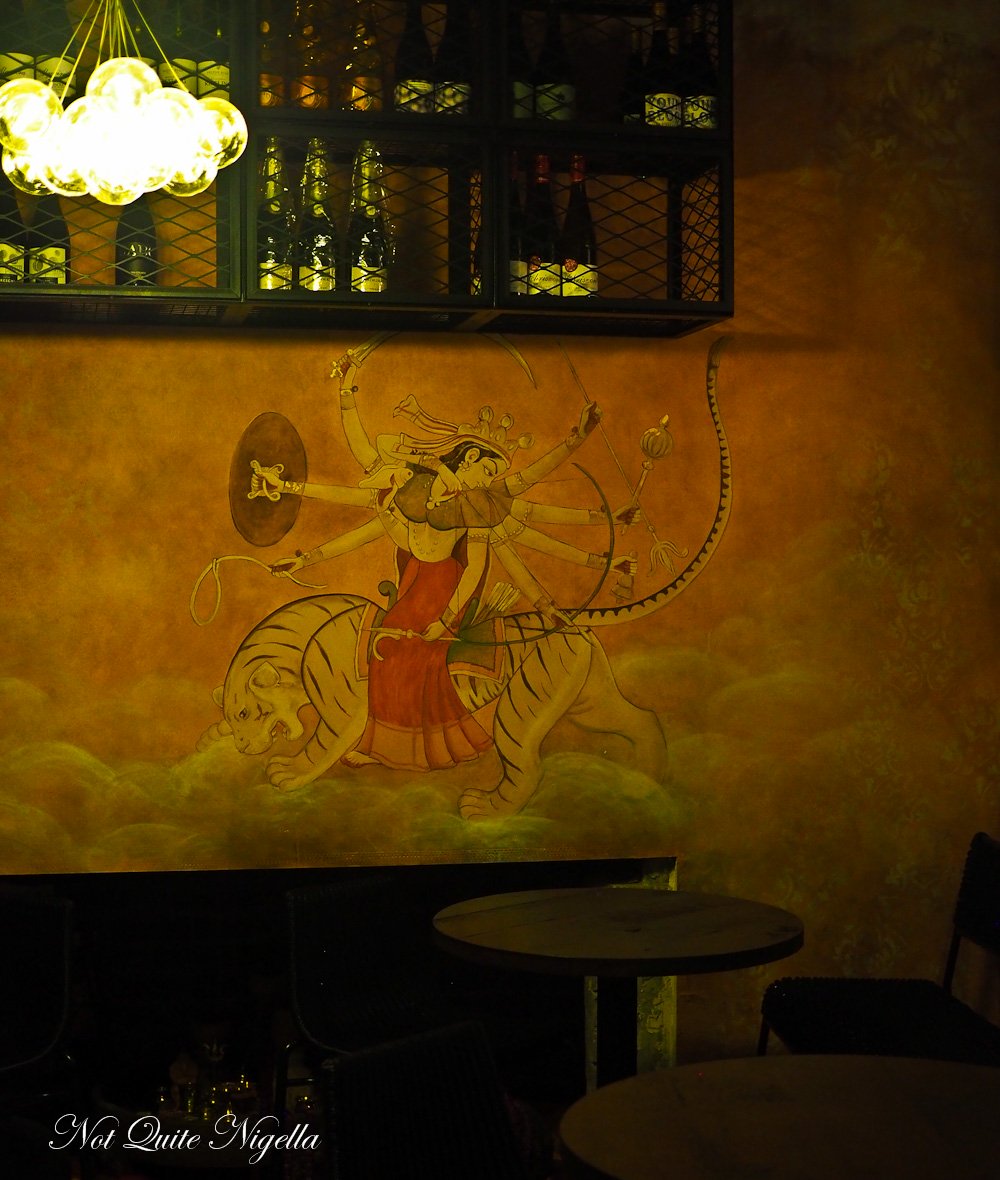 The latest Indian restaurant in Sydney features Indian cuisine that you won't find anywhere else-except in perhaps India. Based on owner Sam Prince's time as an aid worker and doctor in India and Sri Lanka, he came across skilled village cooks who would invite him and his colleagues in for meals as payment for their medical services. It was his time there that prompted the idea for Indu on George Street in the Sydney CBD, a quite frankly glamorous underground restaurant. You just need to know how to get into Indu!

The night before our booking at Indu, the newest, shiniest Indian restaurant in Sydney I was walking down Pitt Street with Alyson. She and I were headed to Mejico, both restaurants owned by doctor, aid worker and restaurateur Sam Prince. 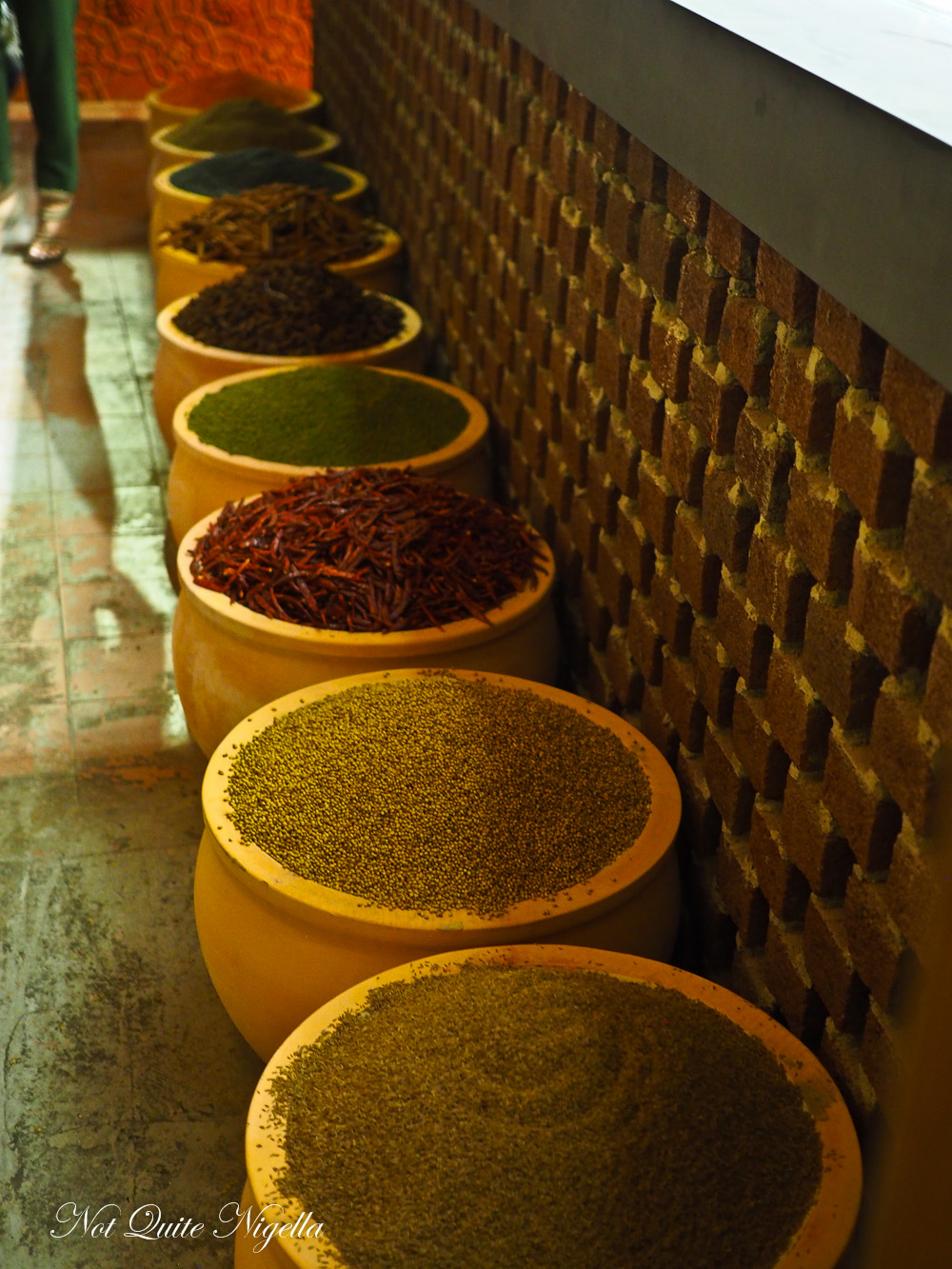 "We are too! What time is your booking?" I asked her. It turned out that the two bookings with within half an hour of each other so we made plans to join the two tables together. 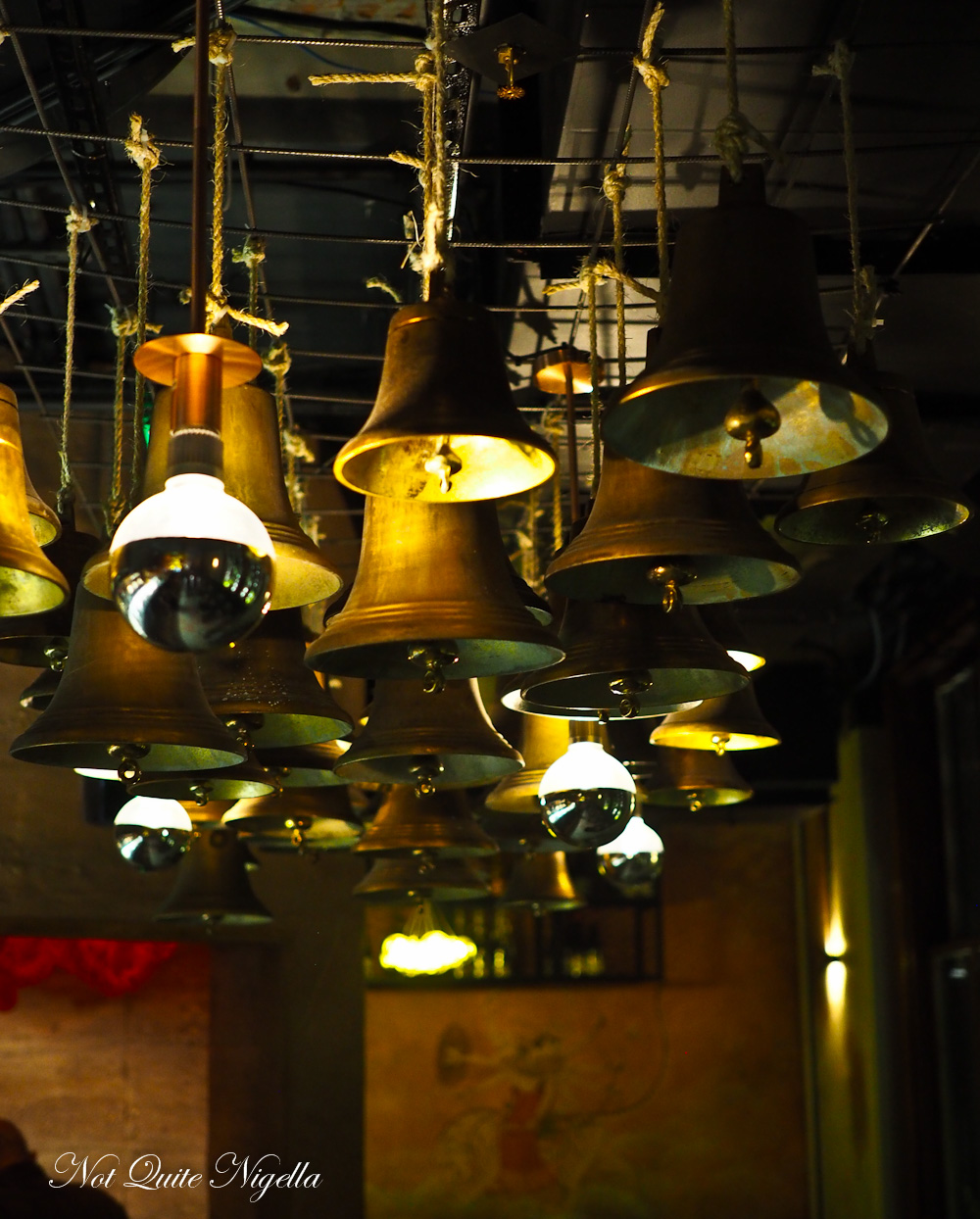 Indu sets itself apart from other Indian restaurants in Sydney and Australia. The idea for Indu came from Sam's experience as an aid worker in 2010 as well as his Sri Lankan heritage. "Myself and others were doing a lot of work in medical aid in Sri Lanka and India at the time it was very rewarding although the villagers couldn't pay us with any money. They always paid us by taking us to their homes and putting on an amazing spread... It just dawned on me that you can't really experience this food anywhere else in the world and that Indian food is essentially colonialised...the butter chickens and naans in the world don't exist in the villages cause in terms of preparation it's almost impossible," he explains. 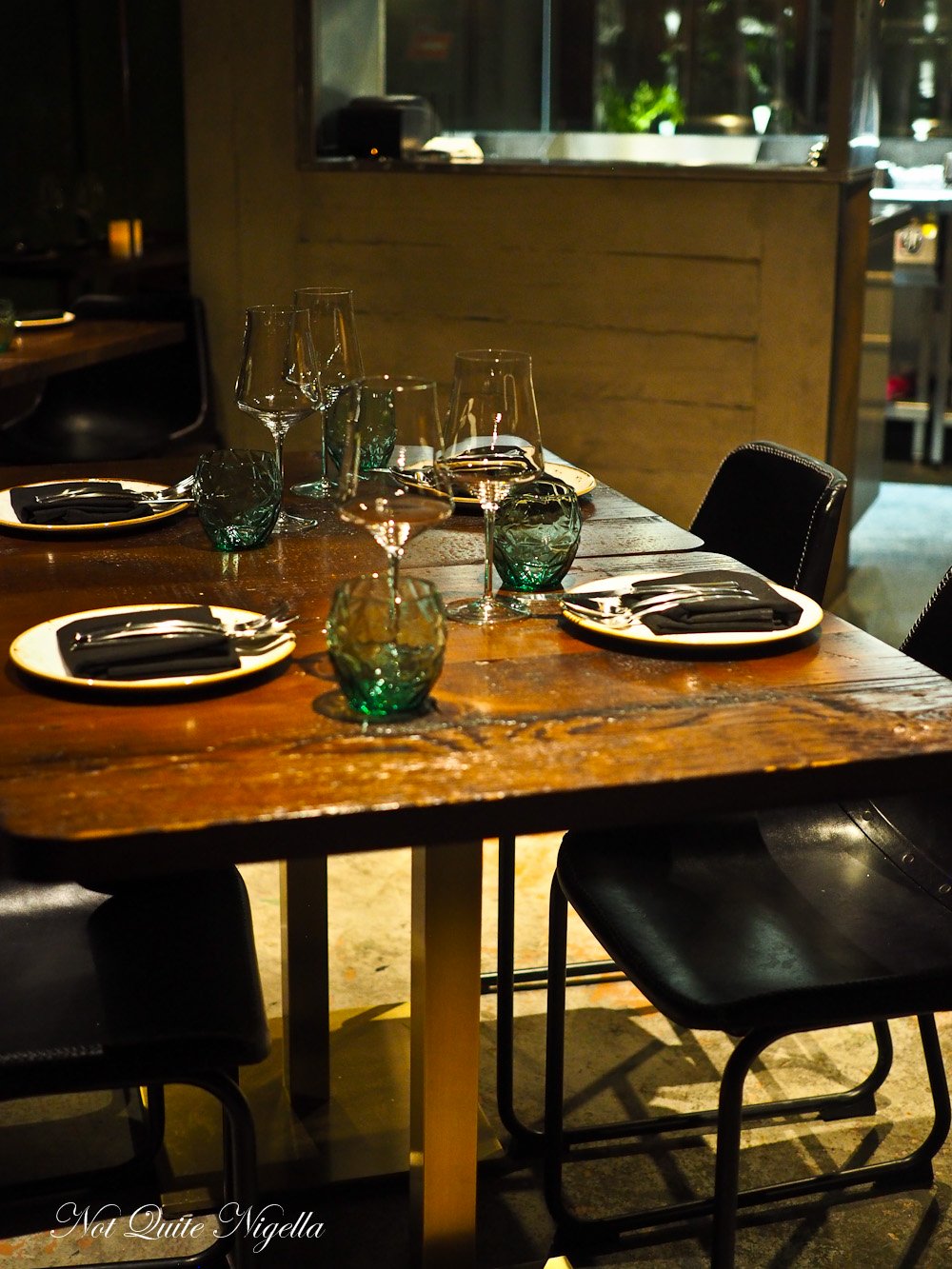 He continues, "What they do eat is healthier, its fresh, it makes use of local produce in the a lot of the coastal areas we were working in. It's the kind of food that people don't experience in the Western world. They were quite healthy people, they were slim and lived for a long time." 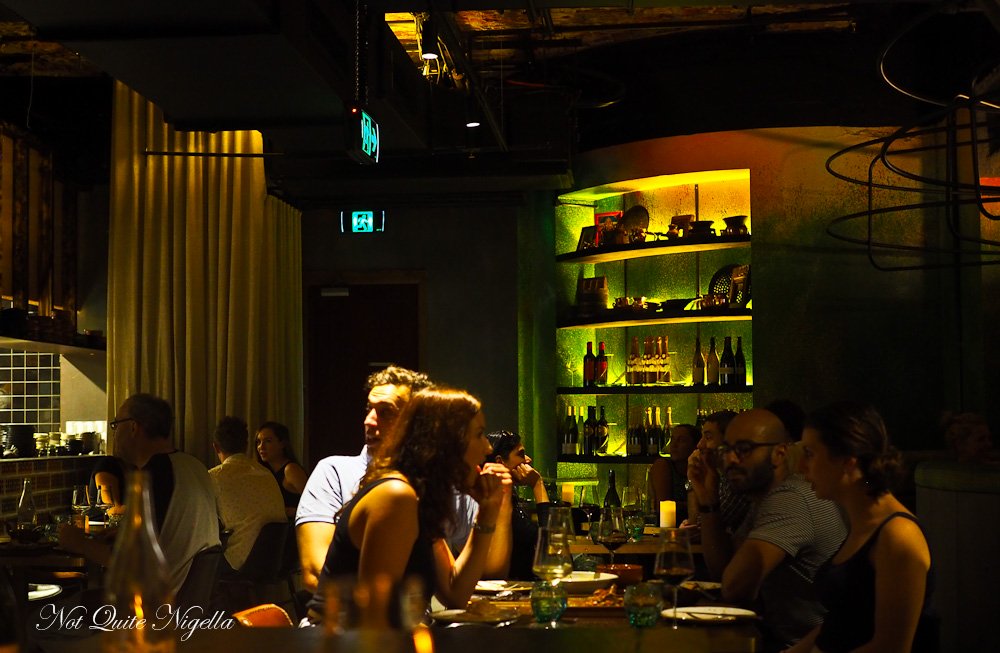 People walking down George Street can steal glimpses inside the Indu kitchen if they look down from the sidewalk. The entrance to Indu however is down Angel Place down the fire escape stairs. The basement restaurant is dark and sexy and it is full this Friday evening with large groups sitting in the green curved booths. Sam tells me that they made the mud bricks themselves to give it more of an a village type feel. 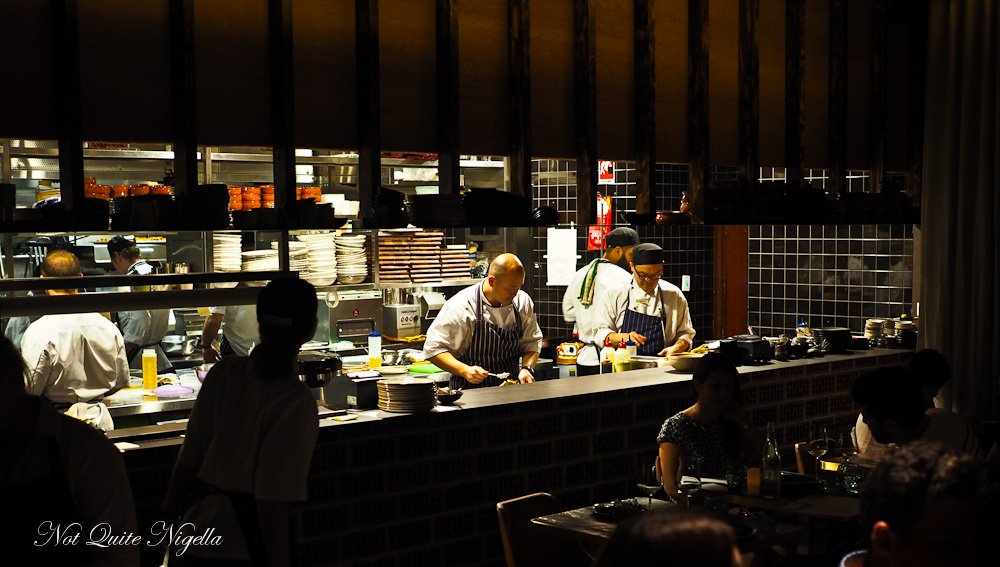 We take a seat at the bar until the whole party of eight of us arrives. We are then shown to a table past one glass fronted kitchen and through the restaurant towards the second kitchen past an art installation featuring salt in bottles that twist and turn. 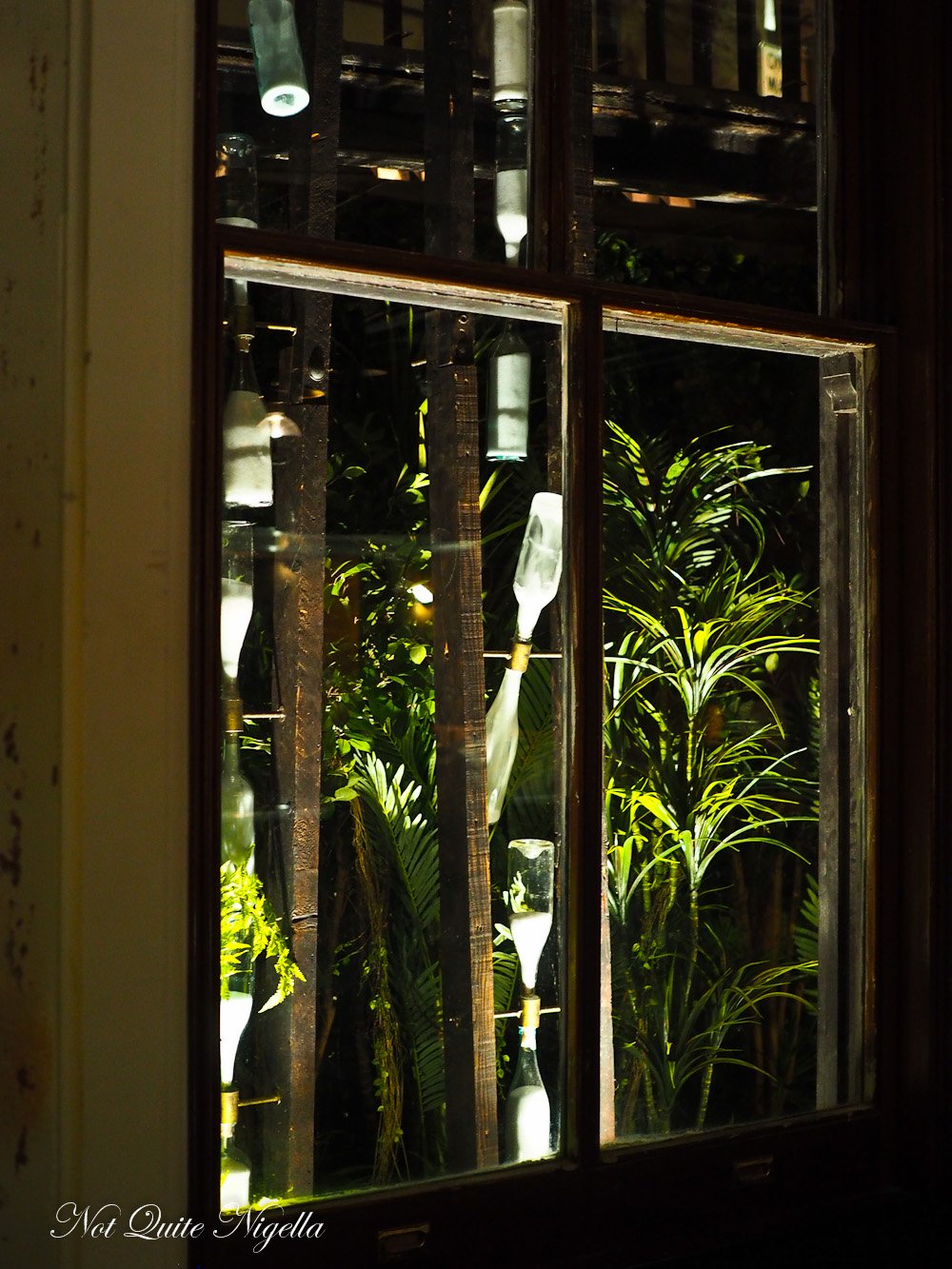 This artwork represents the notion of giving and passing it on with a charity that they have partnered with called Palmera where they build infrastructure to create small local enterprises. Large ceramic pots hold spices and chillies stimulating the olfactory senses. 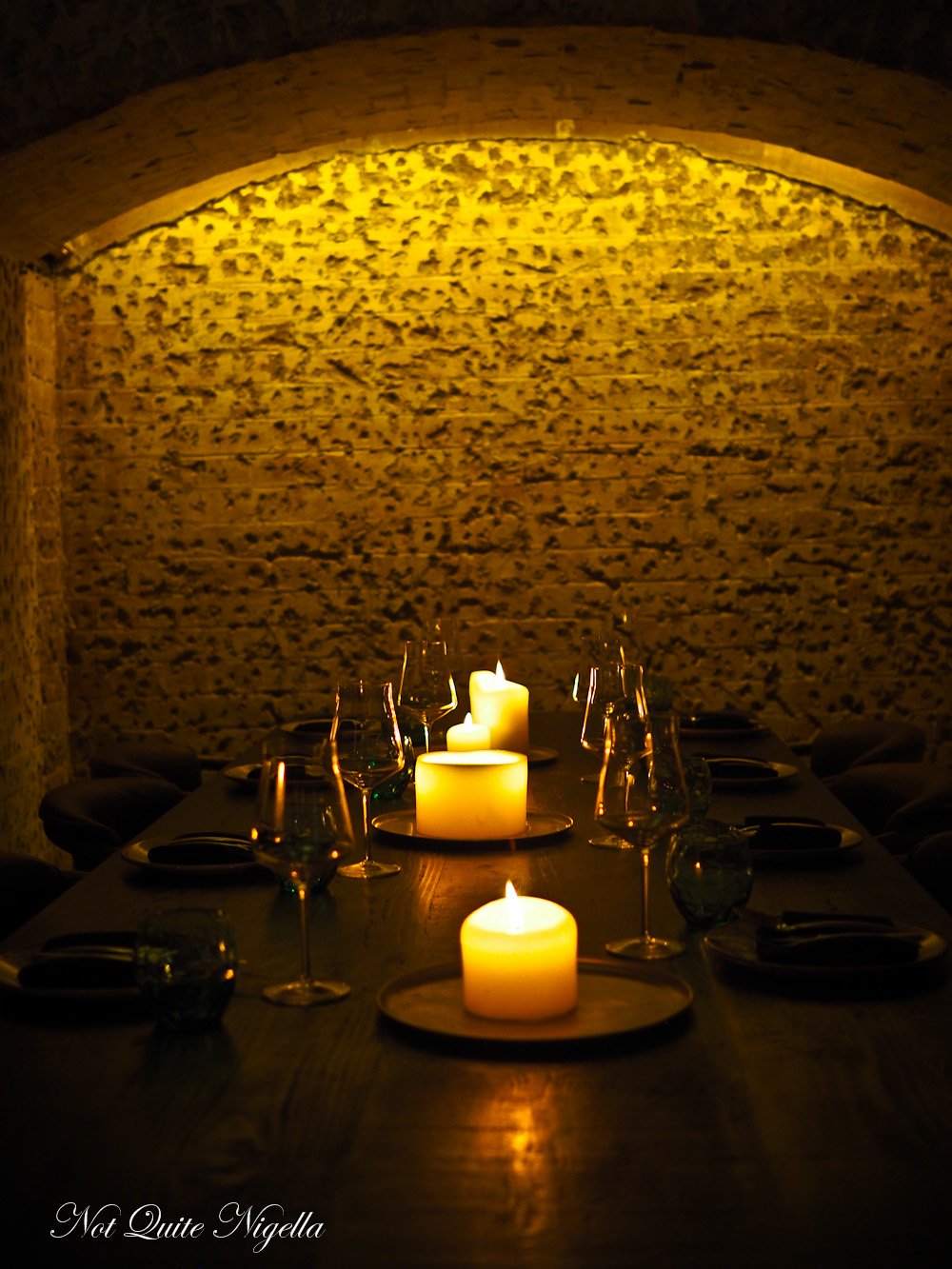 We are shown to a large table which is lit with candles slightly tucked away but with a view of the kitchen. It's like our own private dining space. Cocktails and wine are ordered - as it is relatively new the Indian wine hasn't arrived which is a shame as we were curious about it and Belinda gets lucky on her third try. I have a list of recommendations from Sam for what to order so we go with those plus Alyson and Geraldine throw in some additions too. The music playing is not traditional Indian music but is made up of The Beatles (particularly when Ravi Shankar was working with them), Led Zeppelin and The Rolling Stones. The head chef is Bimal Kumar. 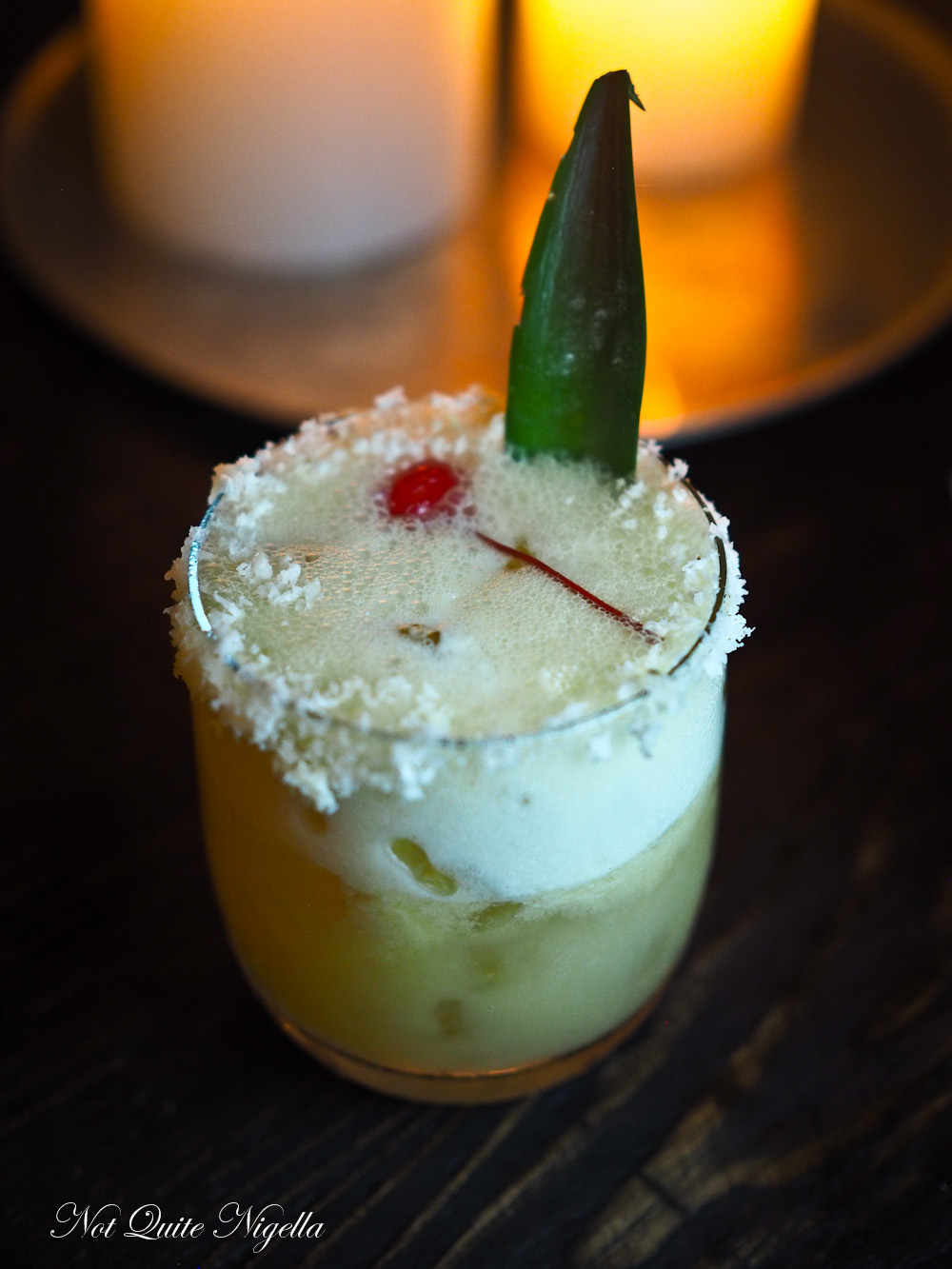 While everyone has wine I stick with my cocktail. Sweet enough to double as a dessert the Kerala Kolada is made with spiced rum, coconut and chai syrup, pineapple and coconut sorbet. I don't really taste the chai syrup but it's a sweet and very tempting cocktail confection. Belinda and I label it "dangerous" (our code for when something is just too drinkable). 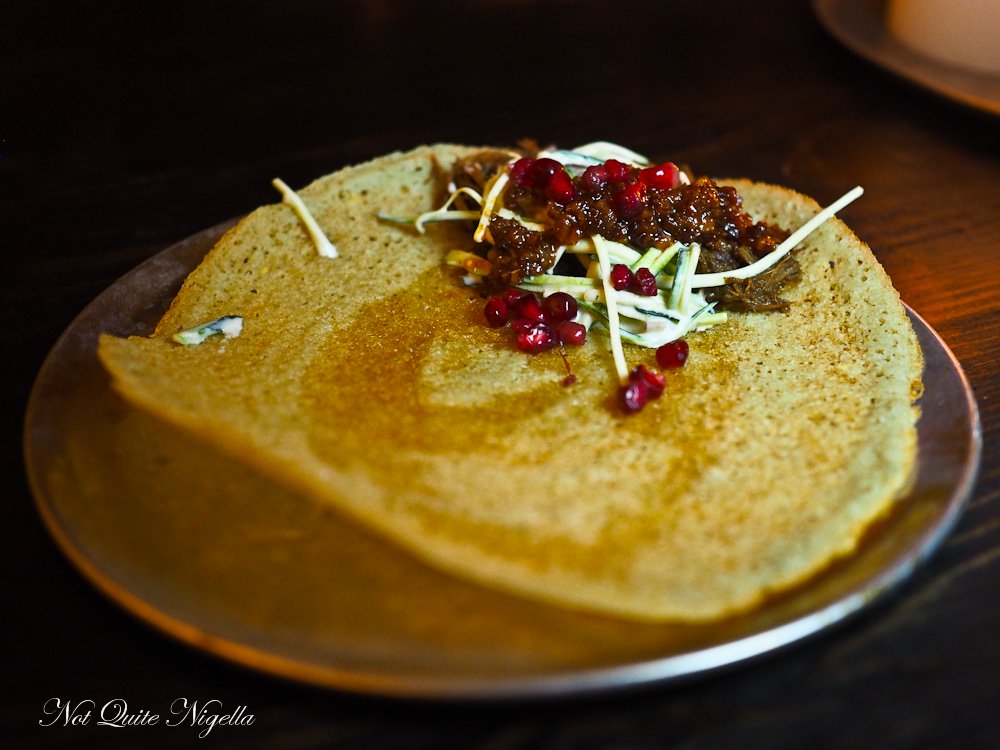 The first item is perhaps not ideal to share and it is smaller than the dosa that we've had previously which are platter sized pancakes that are served rolled up. The South Indian lentil dosa is beautifully crispy though and topped with smoked goat's leg, zucchini raita, pomegranate arils and a chilli and bacon jam. Sam says, "Goat is quite a delicacy in the villages. They're so proud to actually serve it. It was humbling to know that they didn't eat it often." 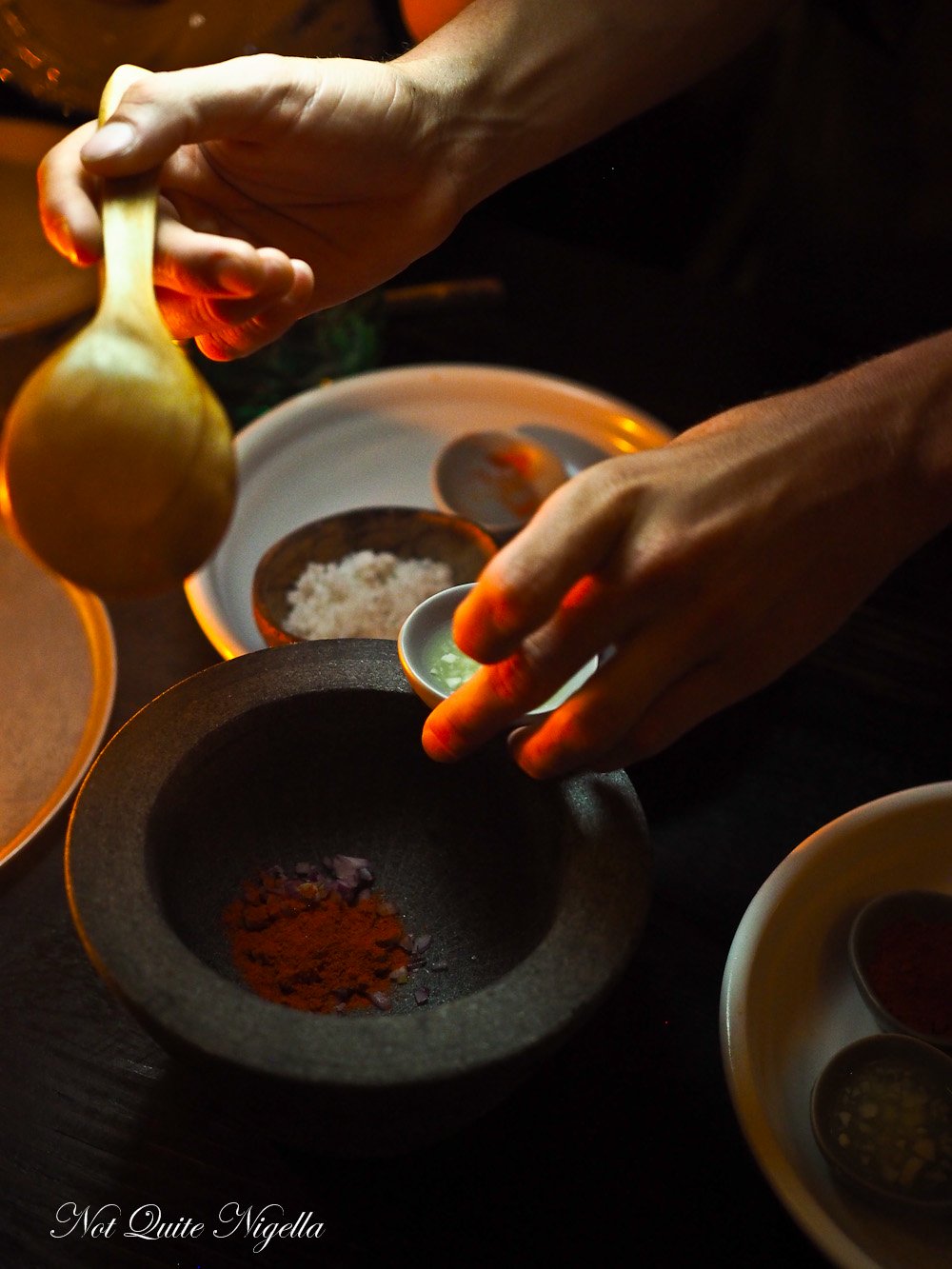 A feature at Mejico is the guacamole made at the table but here the item made at the table is the coconut sambol, a hot and spicy mix of red chilli, red onion and devilled cashew nuts. This is usually an accompaniment but here it is served with two soft, warm Indian milk buns which isn't traditional but Sam tells us that that is how his mother ate it so that is how they are serving it here. 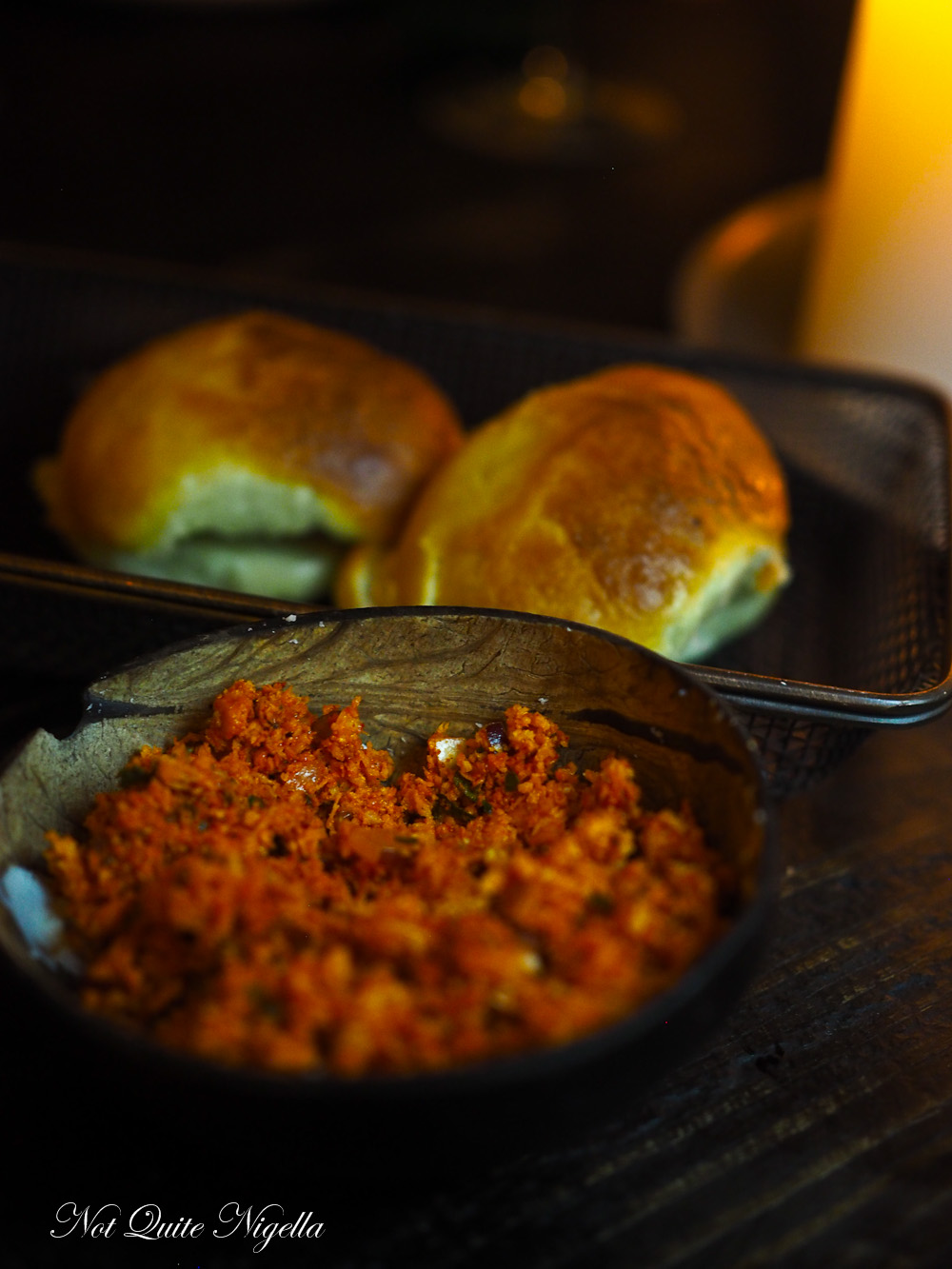 I loved this sambol for the intense spice and the comforting soft milk buns. The waiter scoops all the components into a mortar and pestle and mixes it together and then spoons it into coconut shells to serve. Sam says of the villagers, "The use of spices was so it was like alchemy they intimately knew each ingredient and each spice. They would never use too much of it." 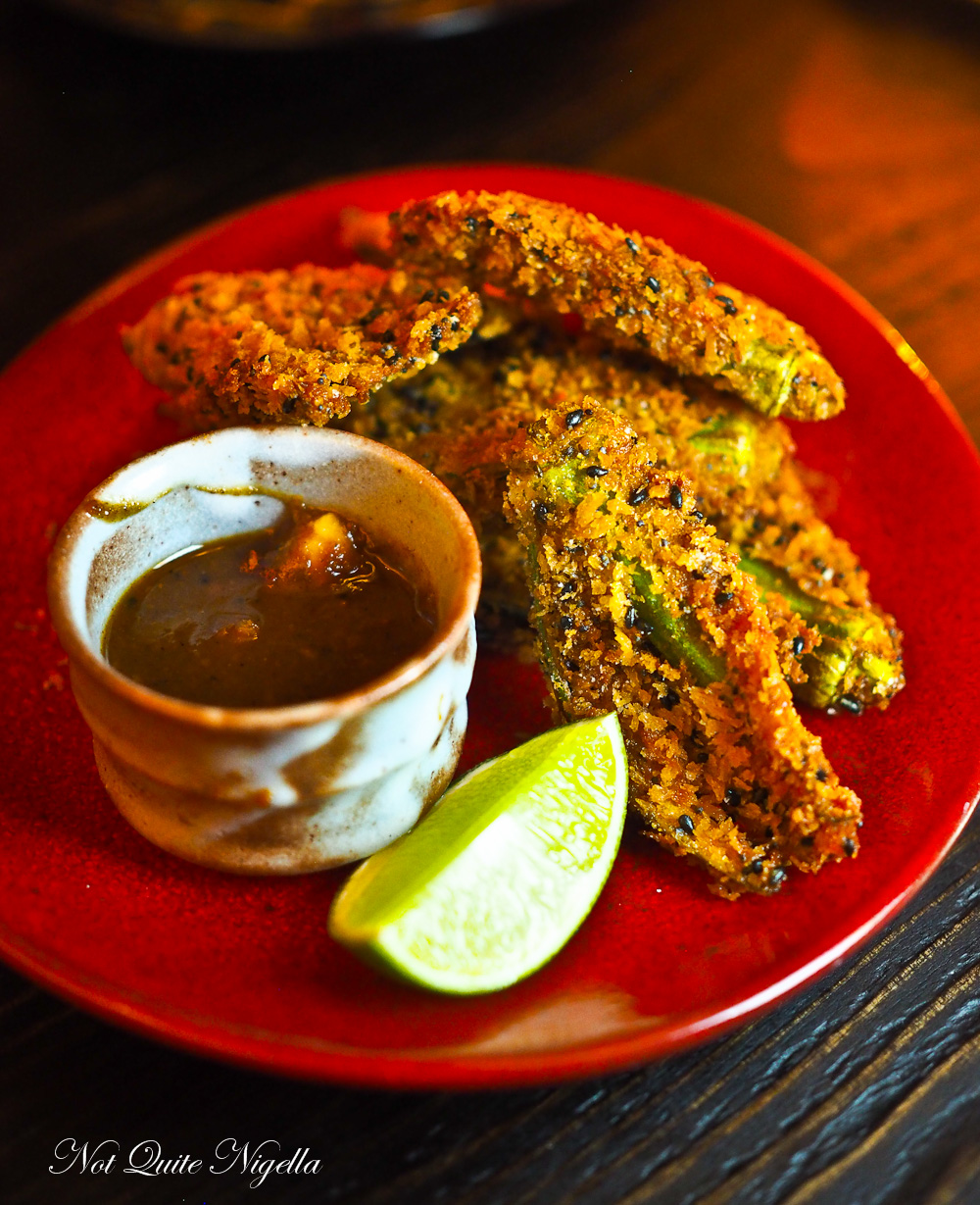 Geraldine wasn't such a fan of the okra because she felt like it had too much breading but Belinda and I enjoy the crunchy texture. We dip it into the sweet and sour banana and tamarind chutney. The okra is sliced so that it fans out giving it more crunch. 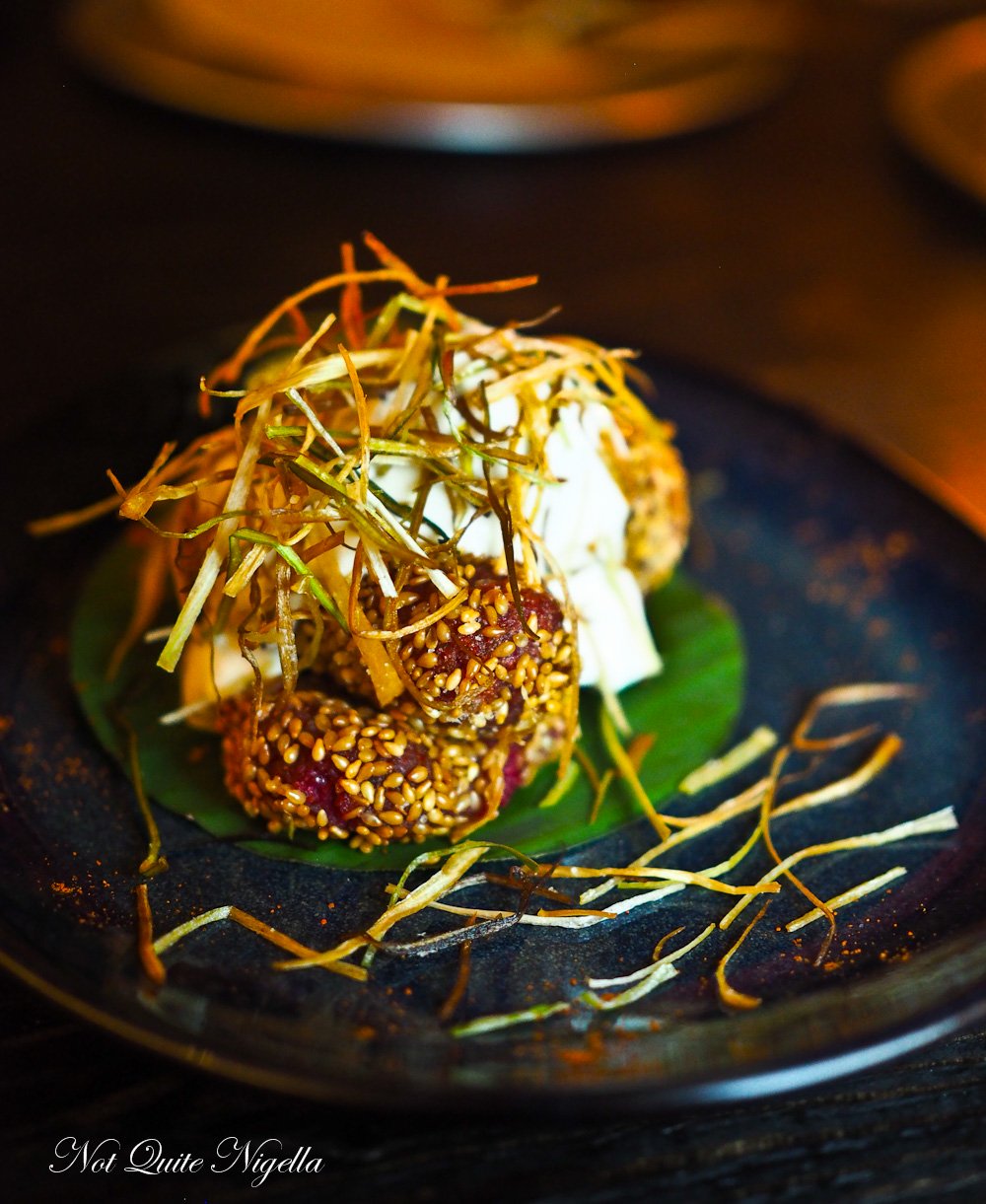 Alyson's choice of the rolled beetroot croquettes is another favourite. The croquette's crunch is more from the sesame crust and the beetroot is soft and flavoursome underneath. It is served with deep fried ginger strands and a garlic raita. 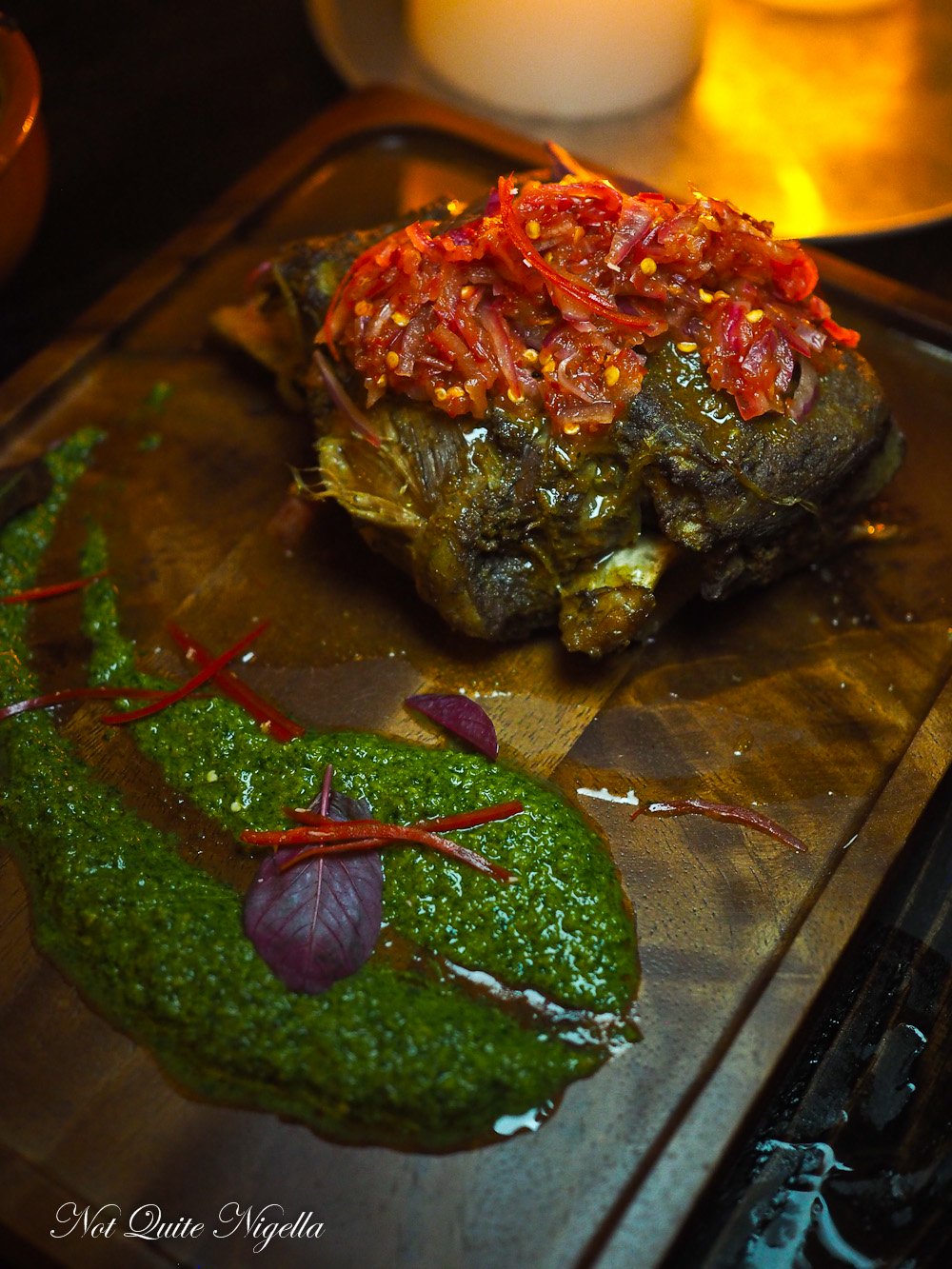 After a pause comes the mains. The lamb raan is said to be their signature dish. You can also get a half serve for $45 or the full size is $80. It is marinated and slow roasted over 48 hours with spices and yogurt. It is served with a swirl of mint chutney and is topped with lunu miris, a Sri Lankan sambal made with onions, sweet chilli and salt. The lamb is incredibly soft - it may possibly be the softest lamb shoulder I've ever eaten in a restaurant. The meat is juicy and the rich intensity is beautifully offset with the lunu miris and the verdant mint chutney. 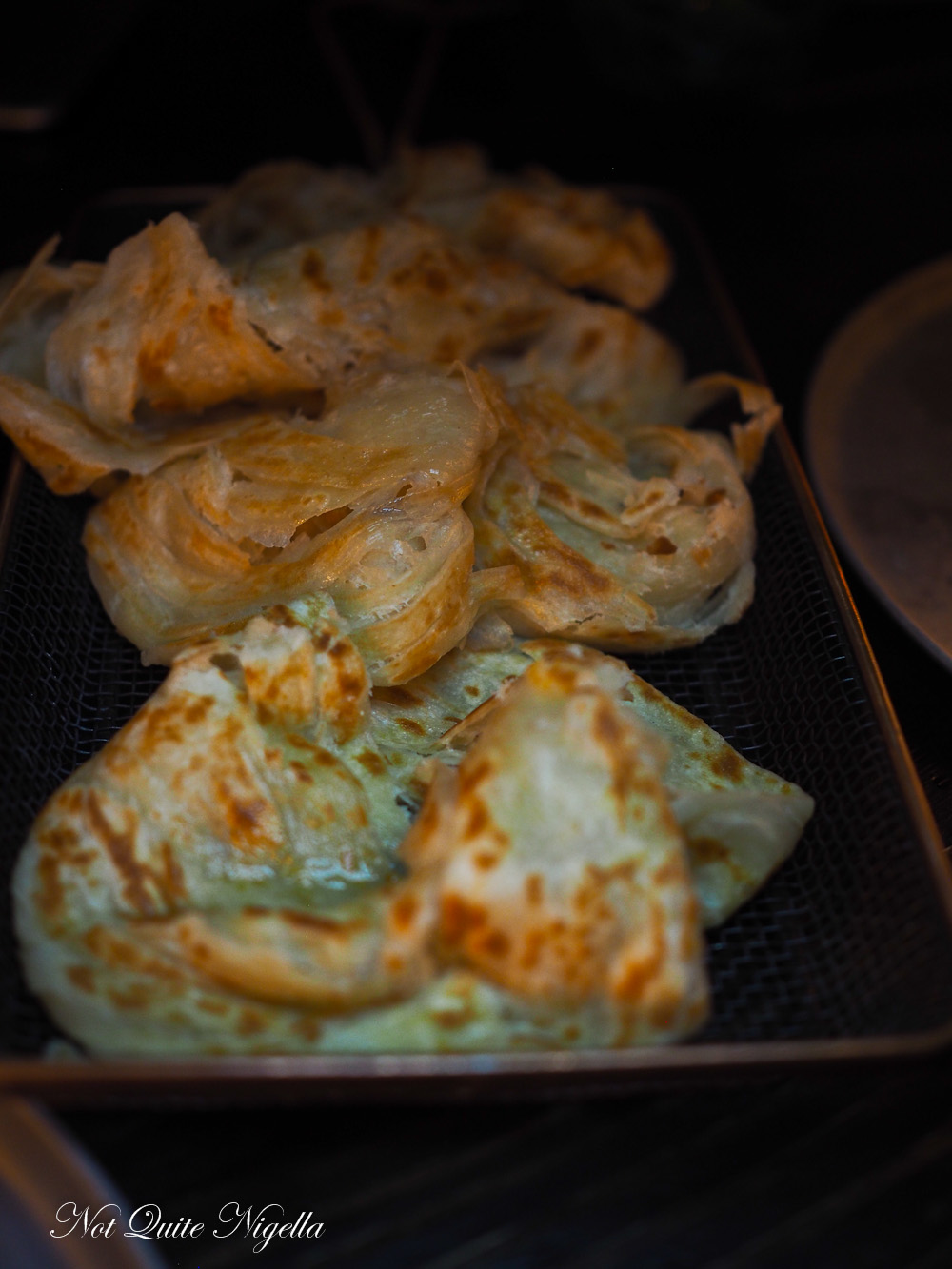 You'll want one of these each," says our waitress. The North Indian paratha is similar to roti, buttery coils of layered flaky bread. We split one each as we have so much food and it's good for mopping up sauce and for dipping too. The words "parat" and "atta" translates to layers of dough. 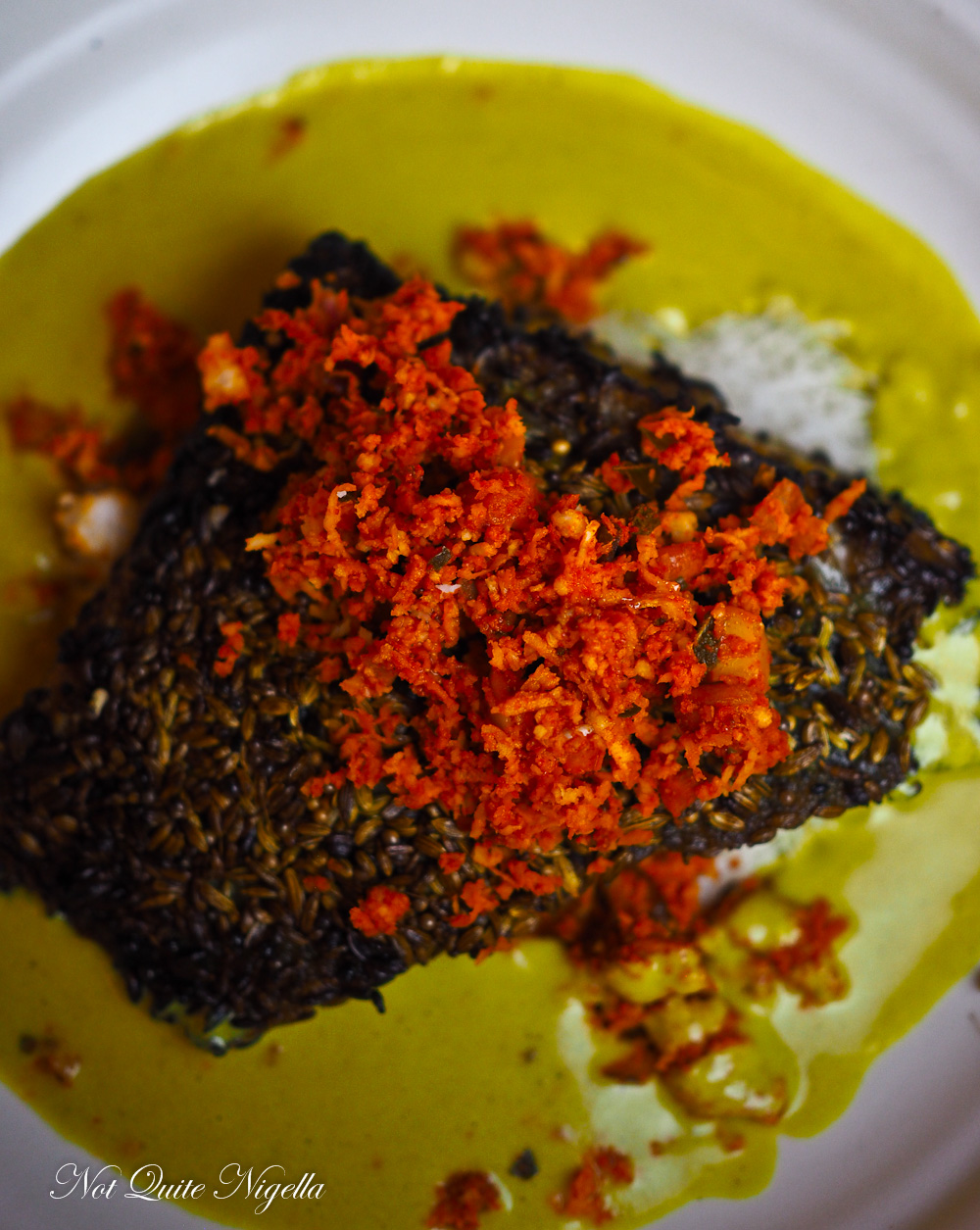 If I thought I liked the lamb the most then I tried the barramundi. I don't even know if I would have ordered this if it were not for Sam's recommendation. It's the favourite main for most of us (along with the lamb). It sounds simple enough: a five spice crusted barramundi generously coated in seeds and spices but the fish is juicy and moist fleshed inside. It comes on a bed of string hoppers or Idiyappam (a Sri Lankan village dish made with rice flour pushed through a plate with fine holes to create white "strings" and then pressed in noodle cakes and steamed). It is also served with creamy coconut molee. This is based on, "What my mum and dad grew up eating in the coastal areas (of Sri Lanka)," says Sam. 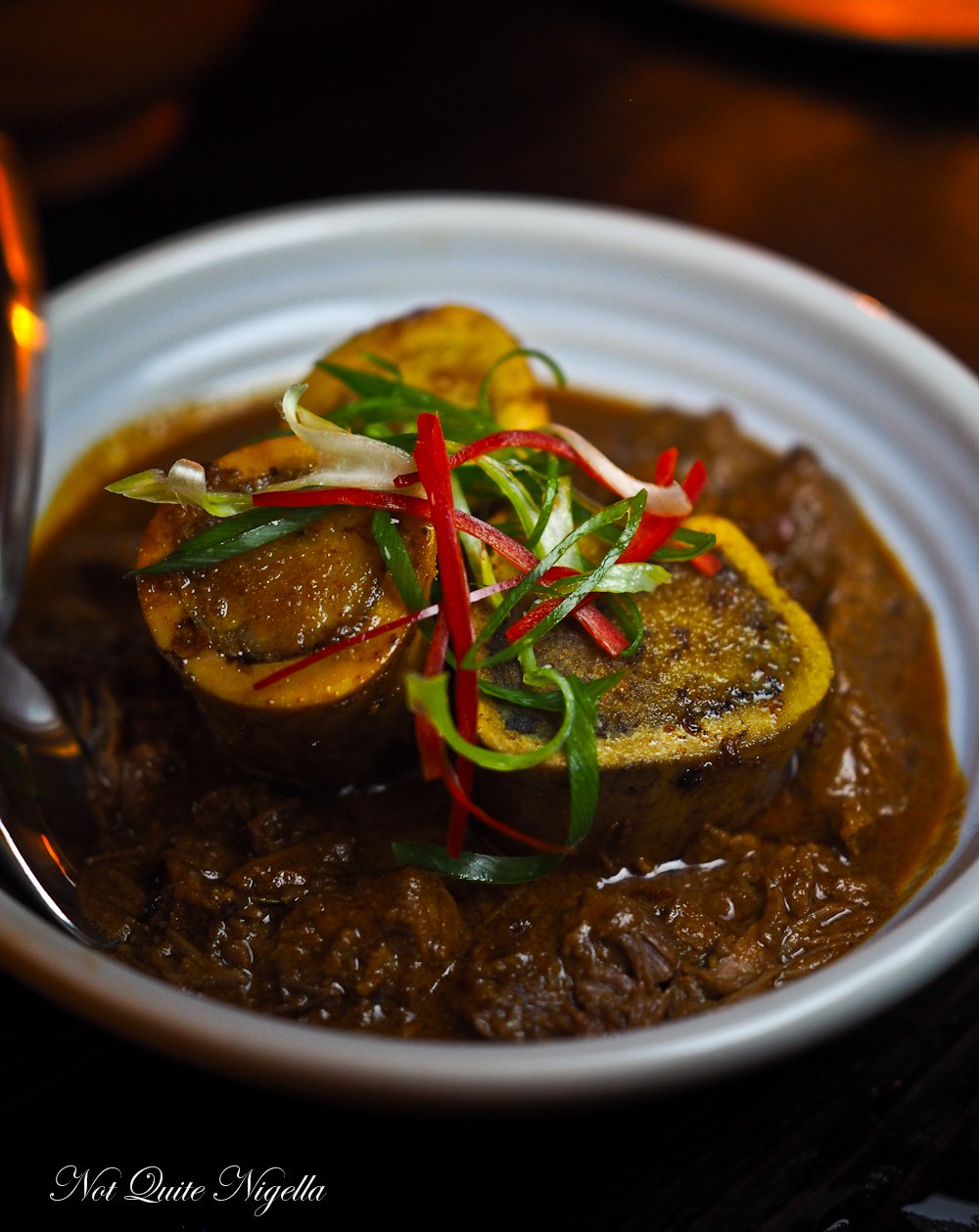 Our last meat main is the bone marrow lamb curry, all rich textures and even richer flavour. While I love bone marrow I felt like I needed something to scoop the bone marrow onto as it was a bit too rich to mix within the already rich curry and I didn't have any paratha left. Still the flavours are very good. 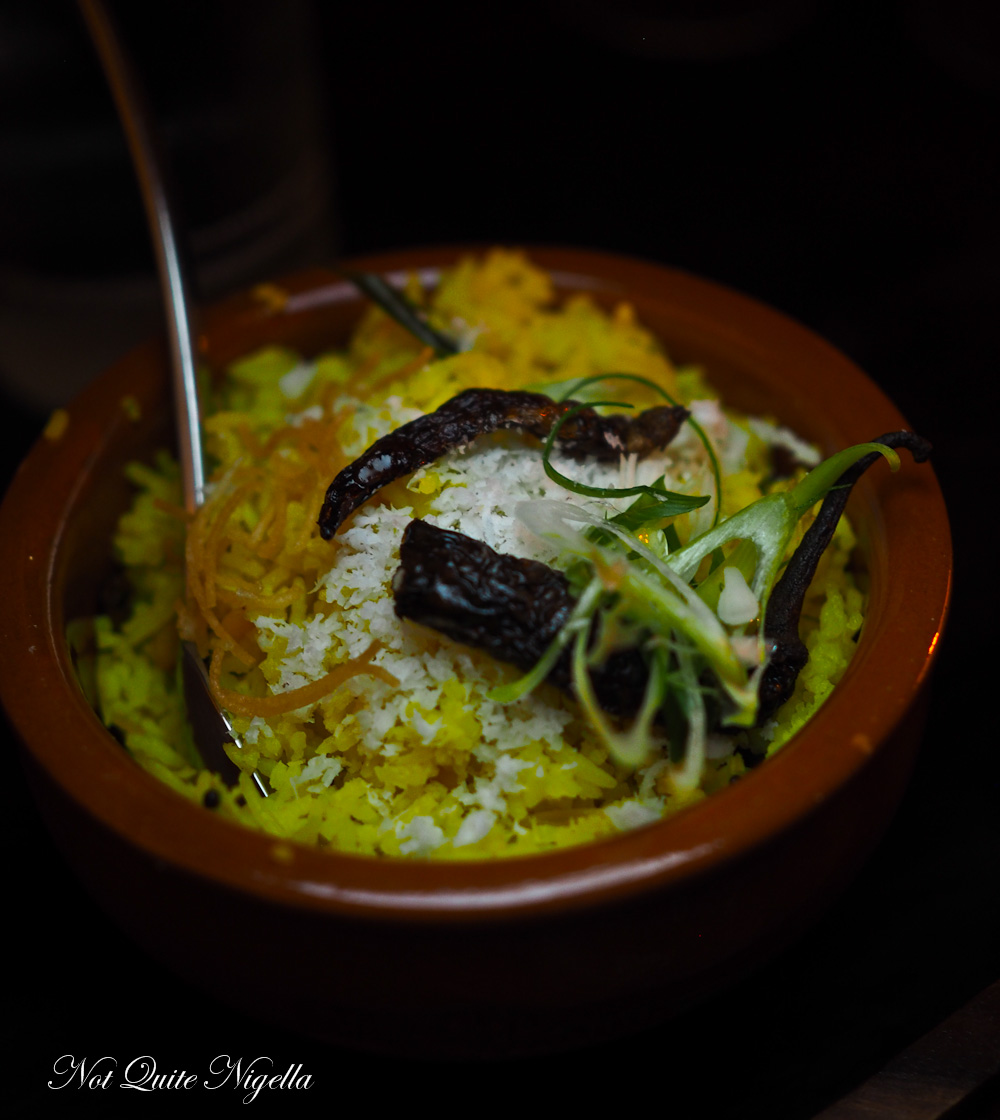 There is plain basmati rice available but there is also a lemon rice with crispy lentils, smashed peanuts, green chilli and freshly shaved coconut on top. There's a lot going on in this rice but all of the flavours complement the dishes well. 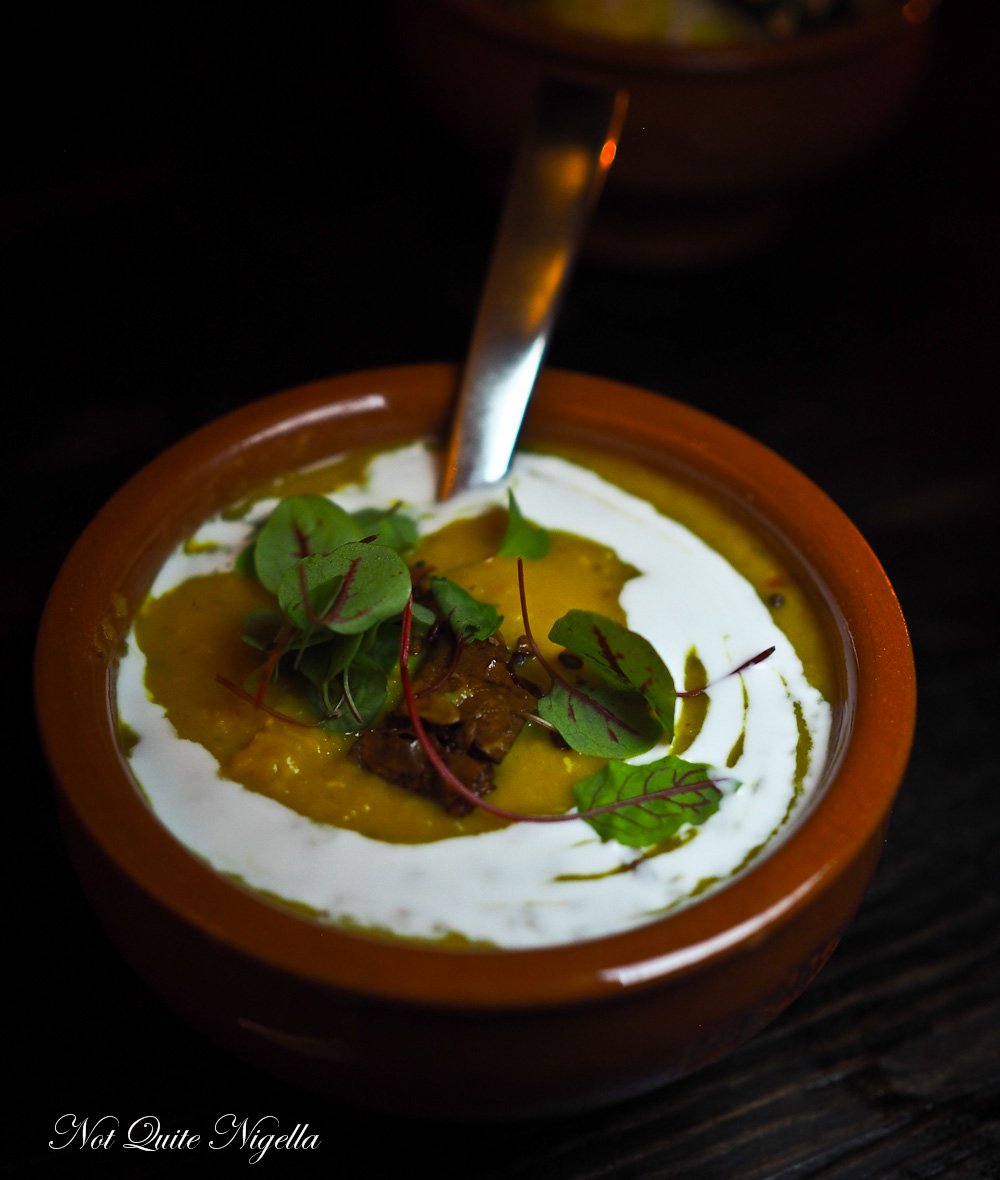 Ahh the daal. We almost forgot about you! Amma means Mother in Indian. This mild red lentil daal is soft and comforting. It is flavoured with msutard seeds and fresh ground coconut it's a delicious version of the healthy but popular staple. 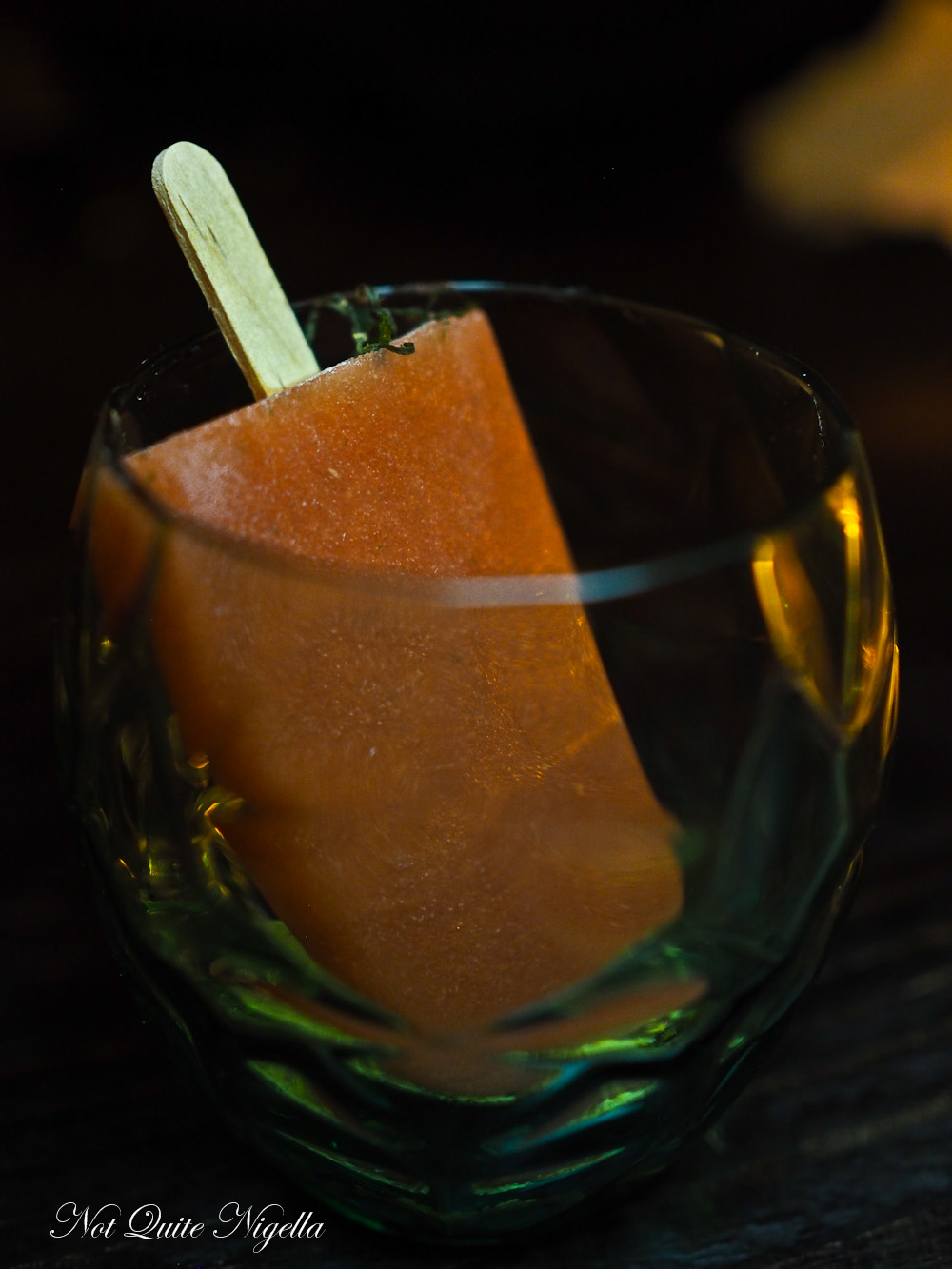 Then it comes to desserts and the menu has four to choose from. We decide to order one of each as we were quite full at this stage. Yes we did manage to split this - the rule was no licking, take a bite and pass it on (don't judge please, we're all friends here :) ). It's very refreshing and popular at the table as the restaurant is kept at quite a warm temperature which only seems to rise after eating. 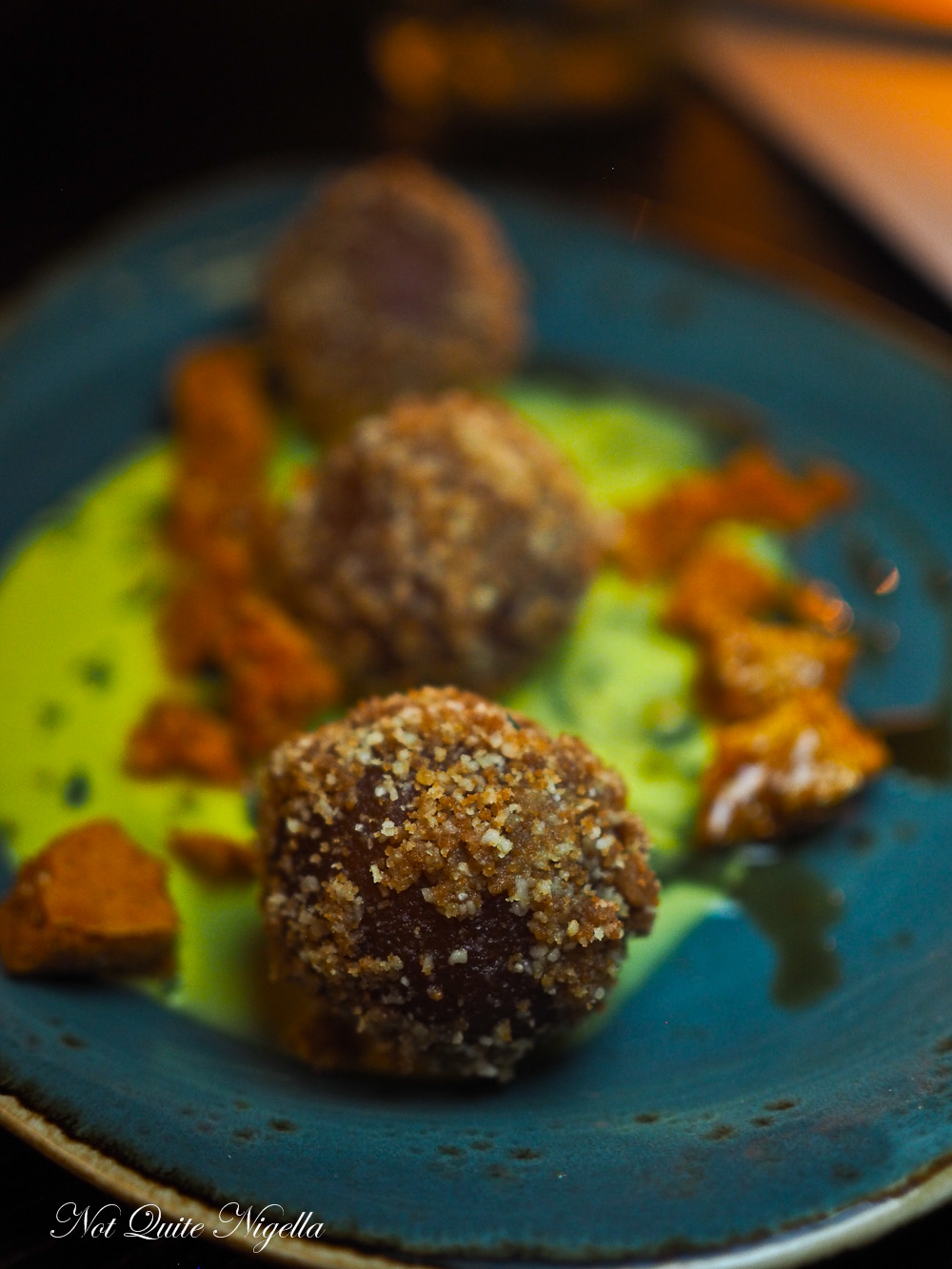 While many of the mains may have been village food, I don't think any of these desserts in their state are served in any villages. This is a fancied up version of gulab jamun aka milk donuts rolled in coconut sand served with saffron anglaise and Kasmiri honeycomb shards. While it is nice it is just too sweet for me after a big, rich meal. 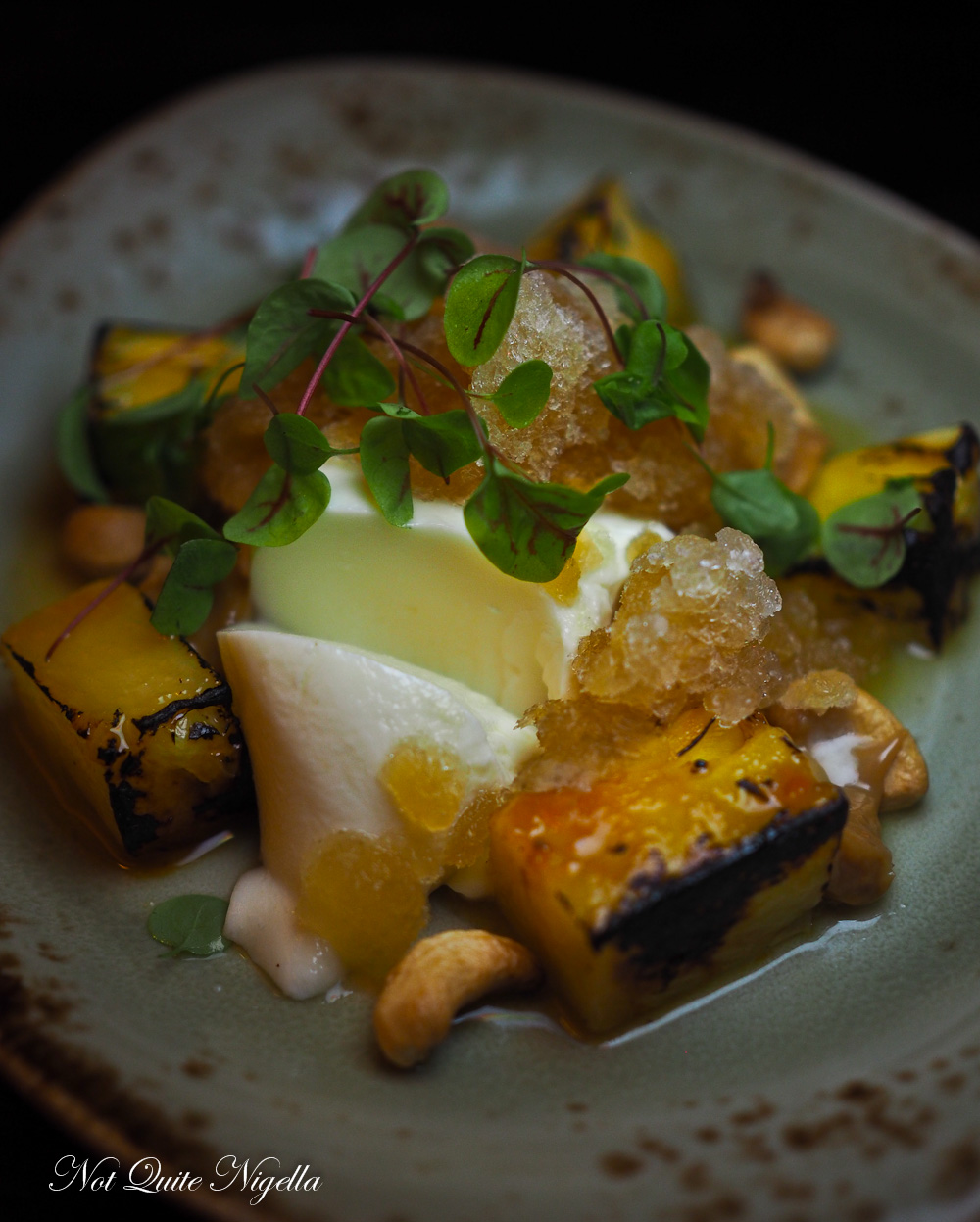 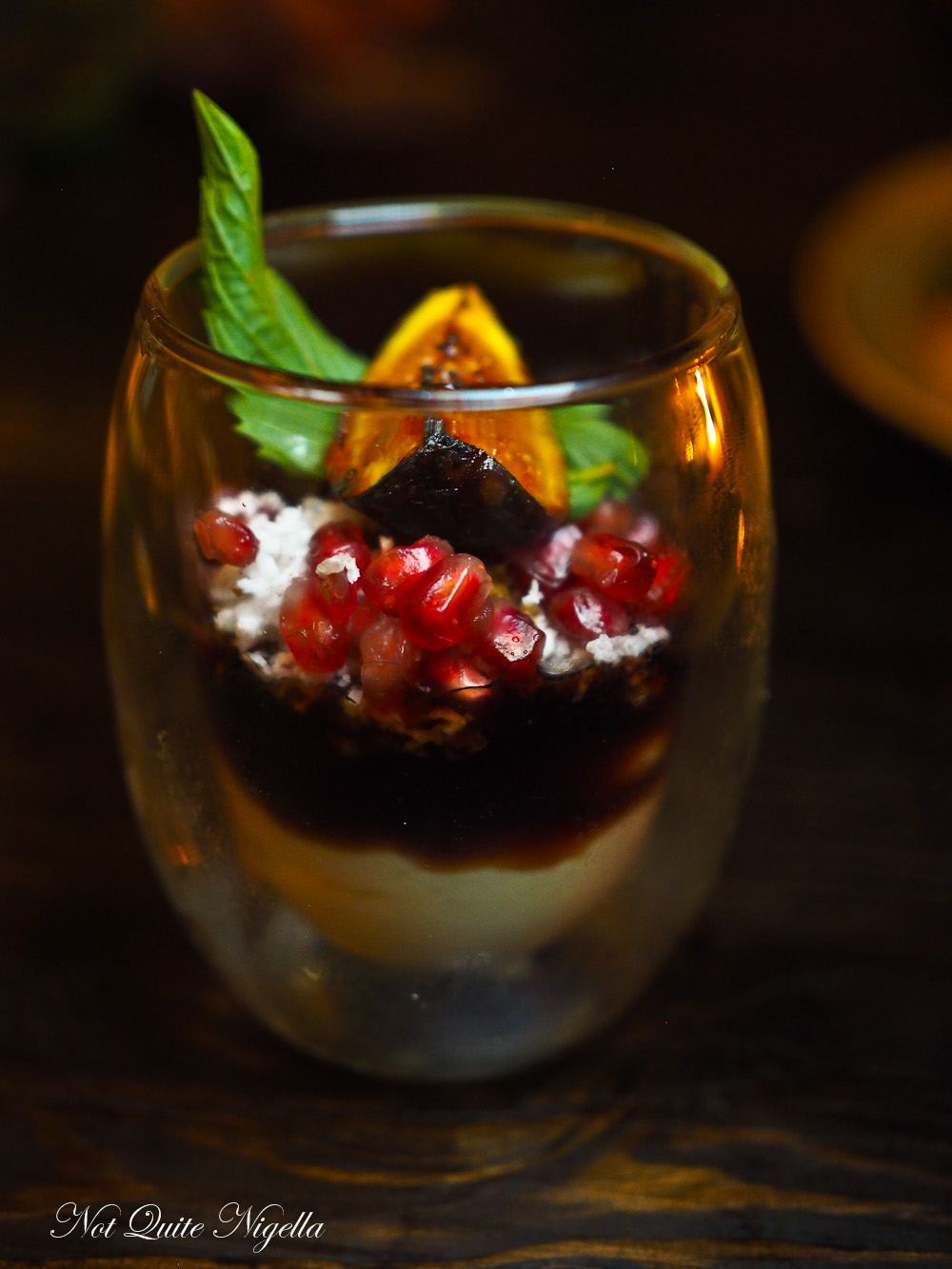 The desserts do tend to be on the sweet side and this is perhaps the most refreshing along with the watermelon popsicle. It's pieces of sweet caramelised pineapple, a cardamom dulce de leche (although I couldn't really taste much cardamom) and a chilli and ginger granita and a wobbly yogurt jelly that is like a panna cotta. The chilli and ginger granita divides people. Mr NQN and Belinda find it too bitter and sharp while Ringo and I both like it. I particularly liked the torched pineapple pieces and the yogurt jelly too.

There's only a few tables left when we leave and coming up from the basement the city is lively and slightly surreal as people dressed in costumes for Christmas parties wander past. It takes a few seconds to get used to as coming up from a subterranean area I could really could have been in New York...or India.

So tell me Dear Reader, what do you do if you see friends at a restaurant? Do you join tables? Do most of your friends know each other? Do you like private dining rooms or do you prefer to be in the main restaurant?