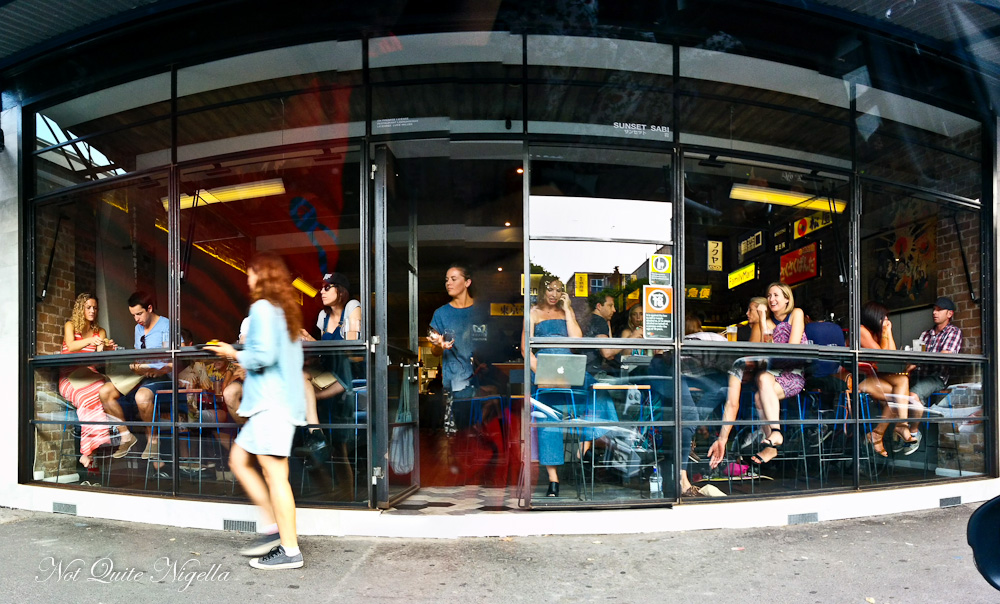 Shtballs, sushi and cocktails? Sounds like the plot of a Hangover-eqsue film. Instead it's a sushi and cocktail bar on Manly's Pittwater Road where Japanese crosses with Mexican (the owners also have Chica Bonita, also in Manly) and items such as La Taco or Japanese beef tacos or Kingfish in Mexico sushi feature on the menu.

Part of the reason why we moved out of Manly many years ago was because weekends were a congested snarl of traffic and tourists. Gone was the idyllic beachside peacefulness and the final straw was watching a man being carried out of a pub by four bouncers, one clutching on each limb. We decided that perhaps a move away was in order. So it's ironic that we are now the tourists when we visit Sunset Sabi.

It was a recommendation from our friend Viggo who lives in Manly and who keenly watches out for new eateries. He and his wife Louise had visited a few weeks ago when it had first opened. It's a sushi bar and cocktail bar with snacks from Japanese and Mexican cuisines. There is a very laidback vibe here as befits Manly and staff are very friendly and dressed in denim (as are the chairs). The prices are a bit of a welcome surprise - cocktails are $15 rather than $18 and there are plenty of well priced dishes.

When Viggo took us the first time it was for a quick snack and dessert after dinner elsewhere. He and Mr NQN had the Hakushika "Kuromatsu" Junmai Daiginjo sake to share. I'm not usually much of a sake drinker I really enjoy a sip of this, served in a glass beaker.

The next visit necessitates a cocktail. It is a Saturday night after all and taking a seat at the bar I order the Spicy Snow Beauty. With creamy sake, habanero, vanilla Absolut vodka, mint and lime. It's perfectly refreshing yet with a long hit of chilli spice which is beautifully tingly. And when we reach to take a photo the Gosling-esque man bun wearing bartender says smiling, "That's about the nicest thing anyone can do." Mr NQN has a Sabirita with wasabi, yuzu, lime, arrette blanco, triple sec and agave. There's a hint of wasabi but it's not like the hit of chilli in my cocktail. 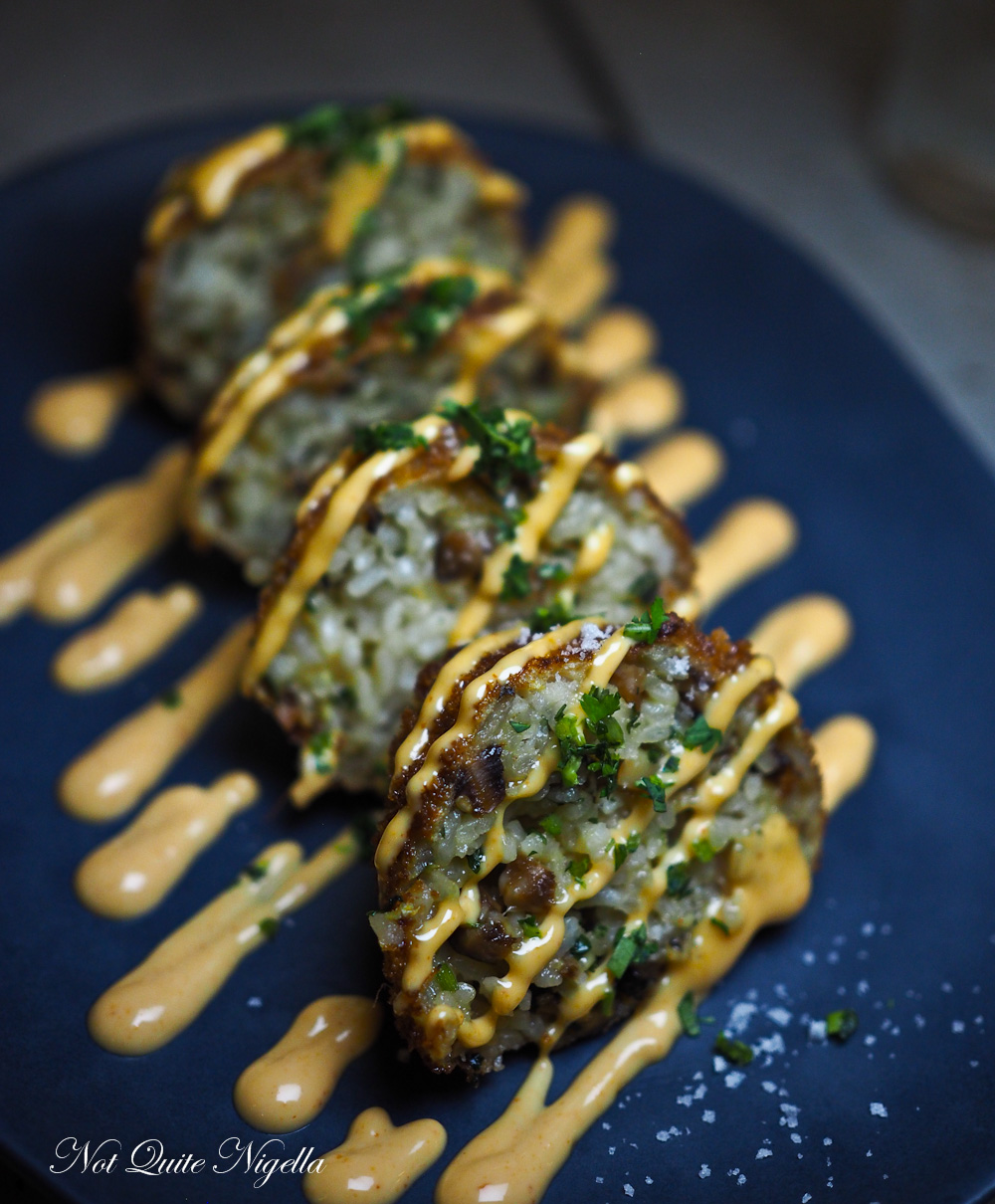 I have to admit I was attracted to the name. Because after reading it all I could think was "Holy Sh*tballs!". It is actually more short for shiitake mushrooms, in this case pickled and mixed with parmesan and made into a crunchy rice ball not unlike arancini in concept. There's perhaps even a hint of celery salt in there too. Served cut in half they're really moreish. Like really. 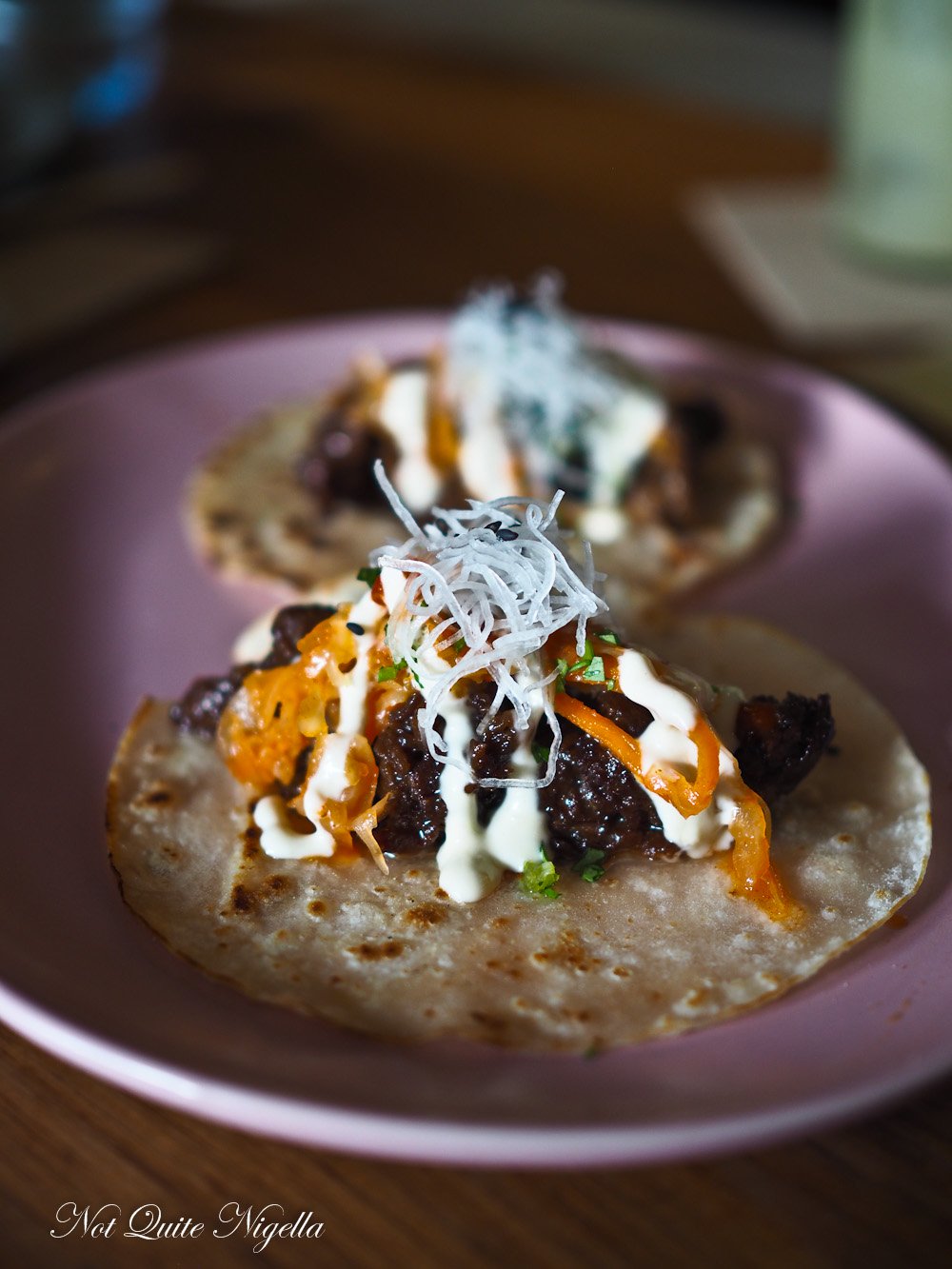 La taco is two tacos that can be made either with Japanese barbecue beef or pickled shiitake mushrooms. It comes on a soft tortilla with theur ponzu kimchi, daikon shreds, ginger Sabi kewpie mayonnaise, Sriracha, coriander and sesame. I adore the flavour of the beef in this but Mr NQN finds the beef in his taco a bit chewy whereas mine was tender. 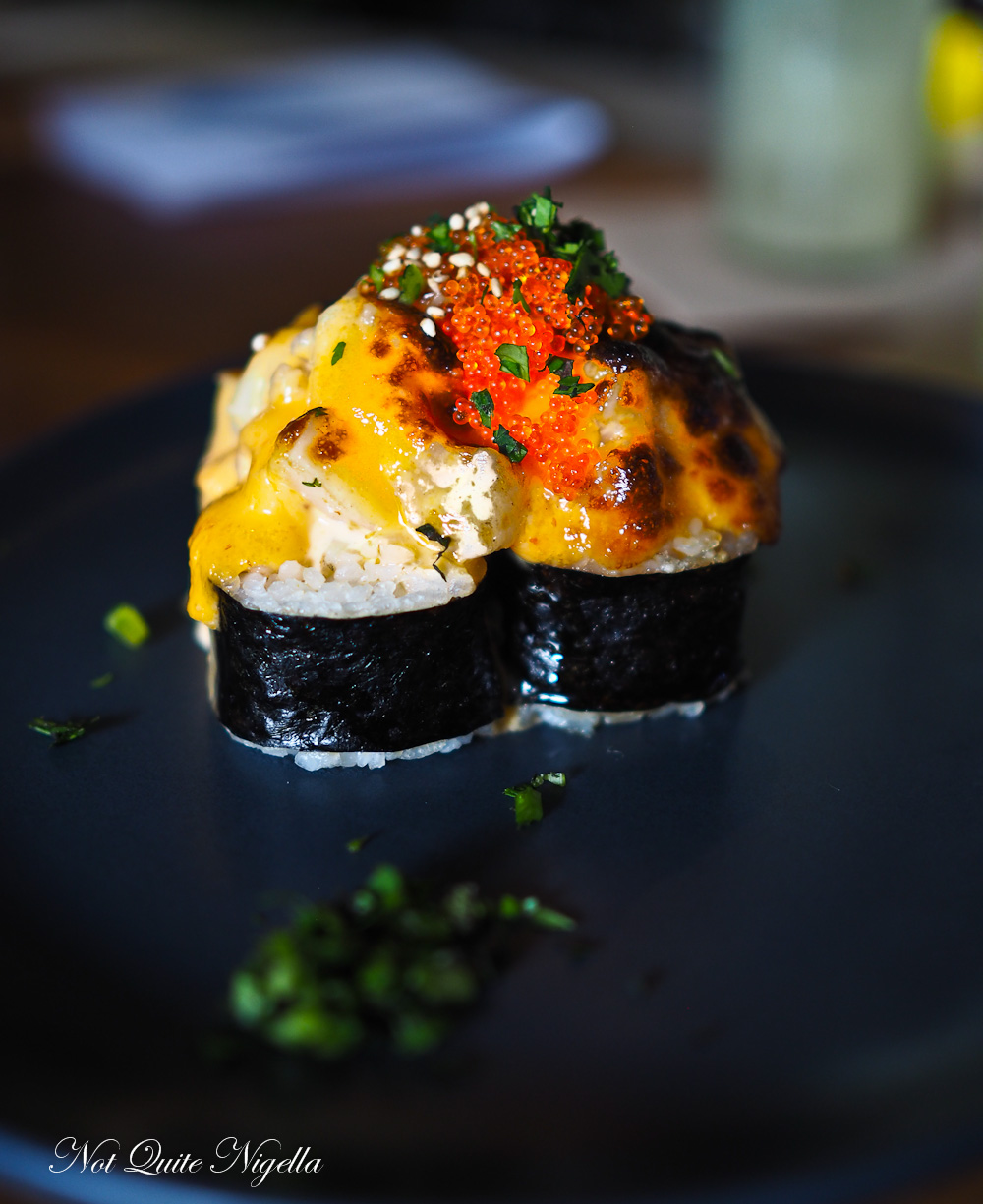 We ordered this more because it was recommended by the waitress. Of course you can get Dynamite sushi at a lot of places nowadays. It's prawn sushi covered with a creamy spicy sauce and scallops and the top of torched. It's rich and creamy and very good. 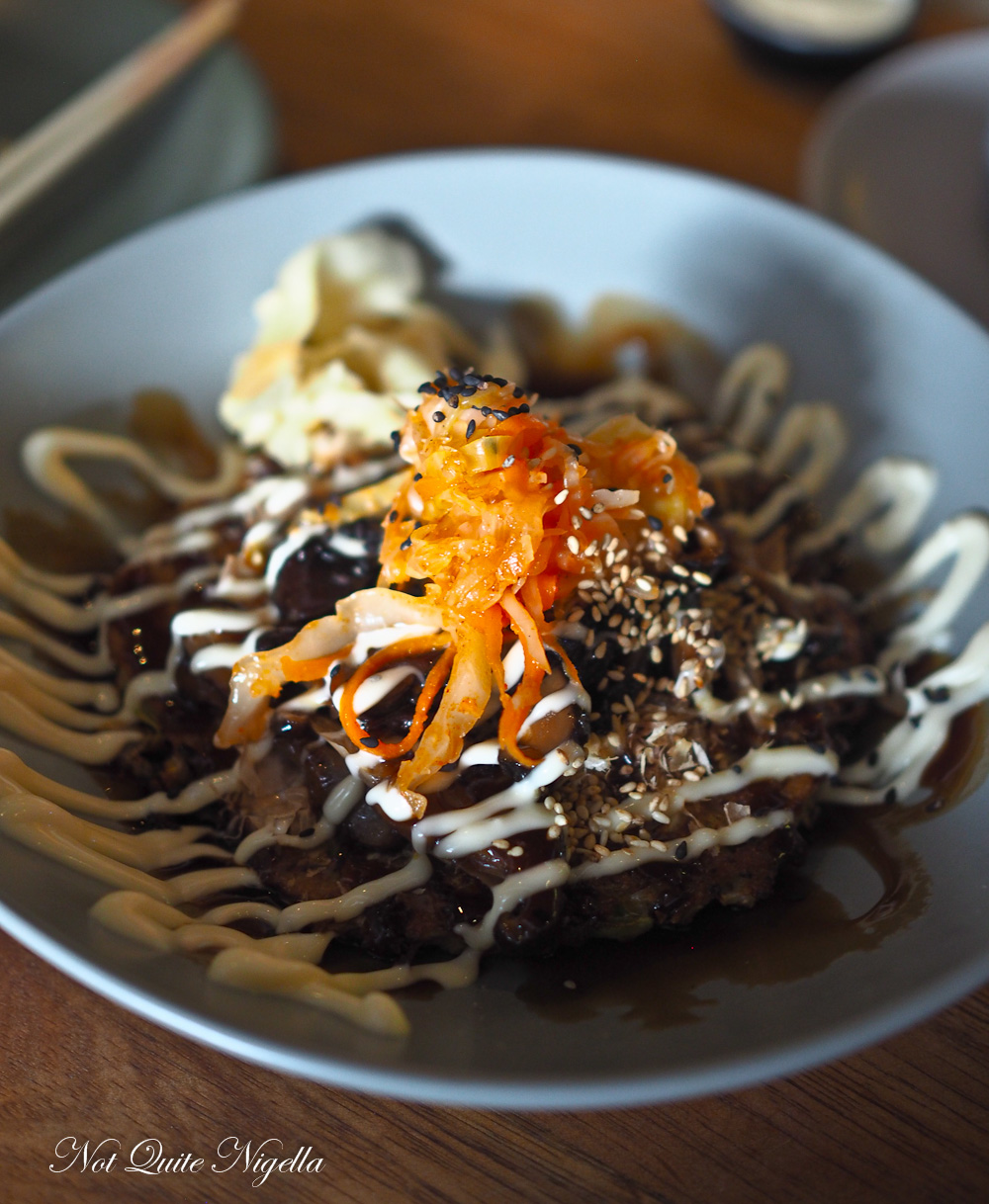 I was curious to see how a vegetarian okonomiyaki would go. I know that there are vegetarian readers out there and I am sorry that I neglect you at times. This is really good and you really don't miss any of the seafood or meat that is usually served in okonomiyaki. It is a vegetable pancake topped with plenty of picked shiitake mushrooms, bonito flakes, mayonnaise, bulldog sauce, ponzu kimchi, pickled ginger and sesame. 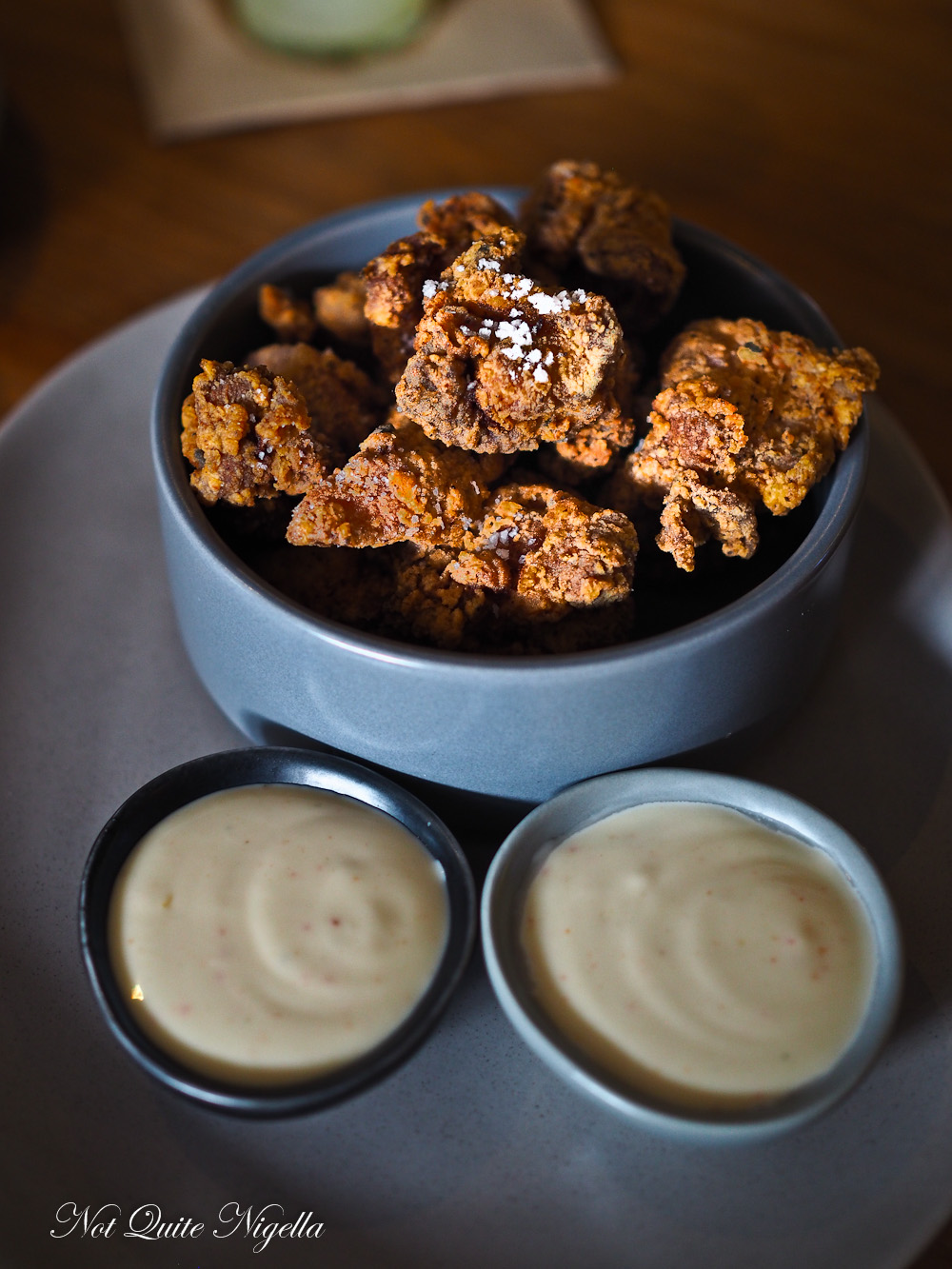 This was another recommendation from the waitress. Southern style chicken seems an odd choice at a sushi bar and it is served boneless with a yuzu mayonnaise dipping sauce. It's a bit too dry for me and we leave most of this. A karaage chicken would have been great in its place. 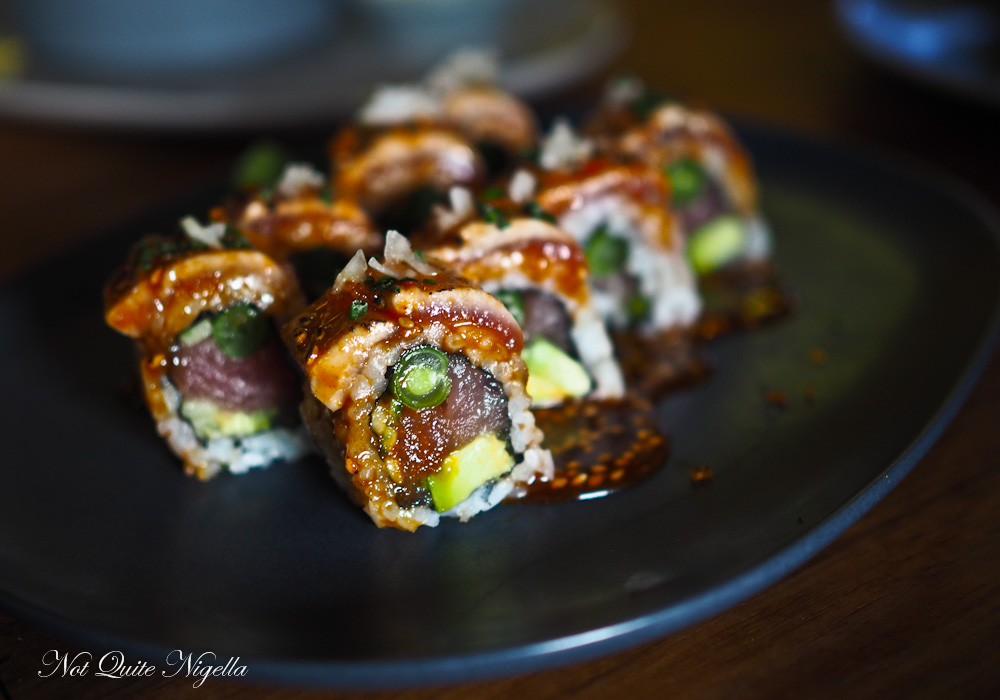 We watch the Japanese sushi chefs prepare the sushi next to the bar while the rest of the food comes out from the kitchen towards the back. The sweet heat roll has spicy tuna, cucumber, green beans, avocado, tuna, onion, chilli masago and sabi'q barbecue sauce. It's a rich dish but doesn't quite deliver the heat as promised in the name and there's a lot going on in here that the main stand out flavour is the sauce. 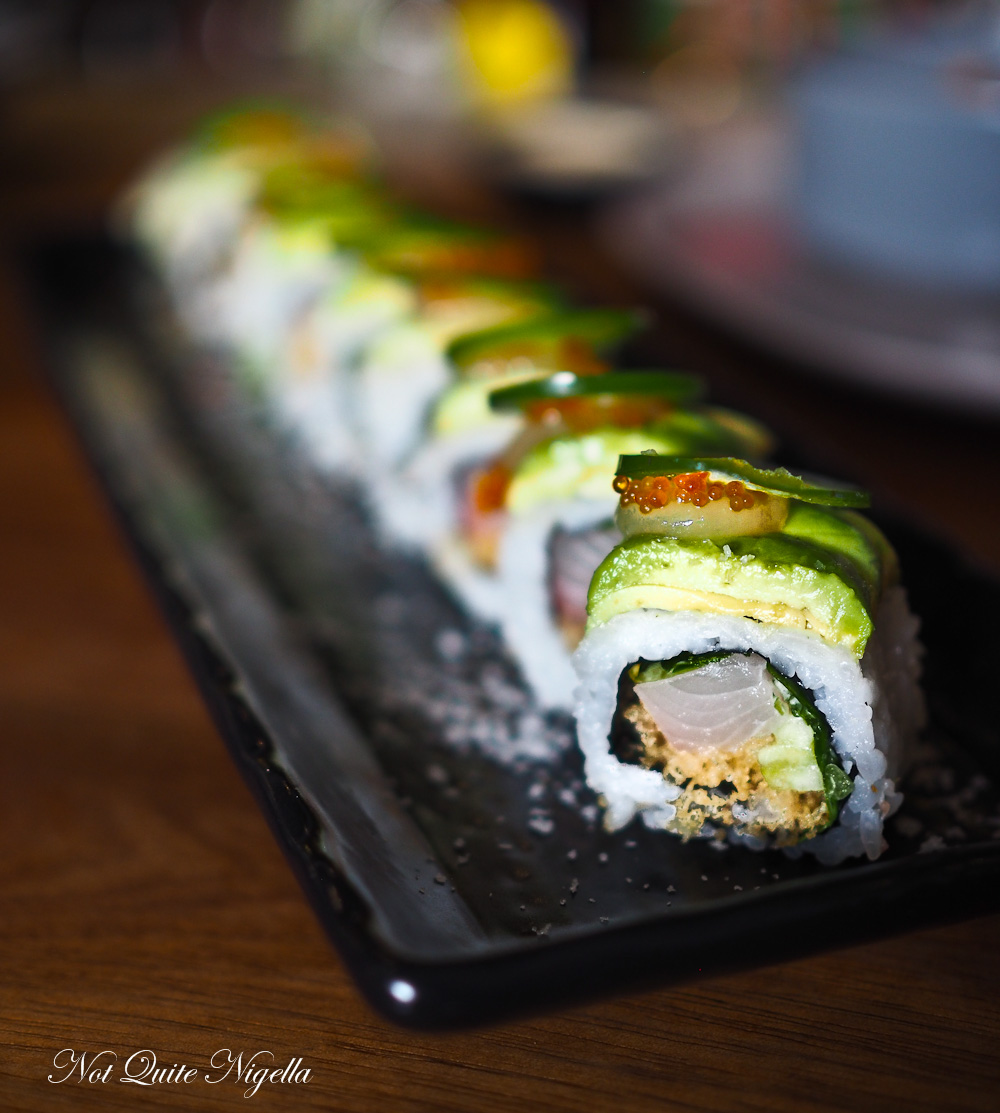 I much preferred this sushi roll. Like a sushi version of ceviche it is fresh and it also has some added crunch from the tempura crumbs. It is made up of kingfish, coriander, cucumber, mayonnaise, avocado, pineapple candy puree, masagao and a thin slice of jalapeno on top. 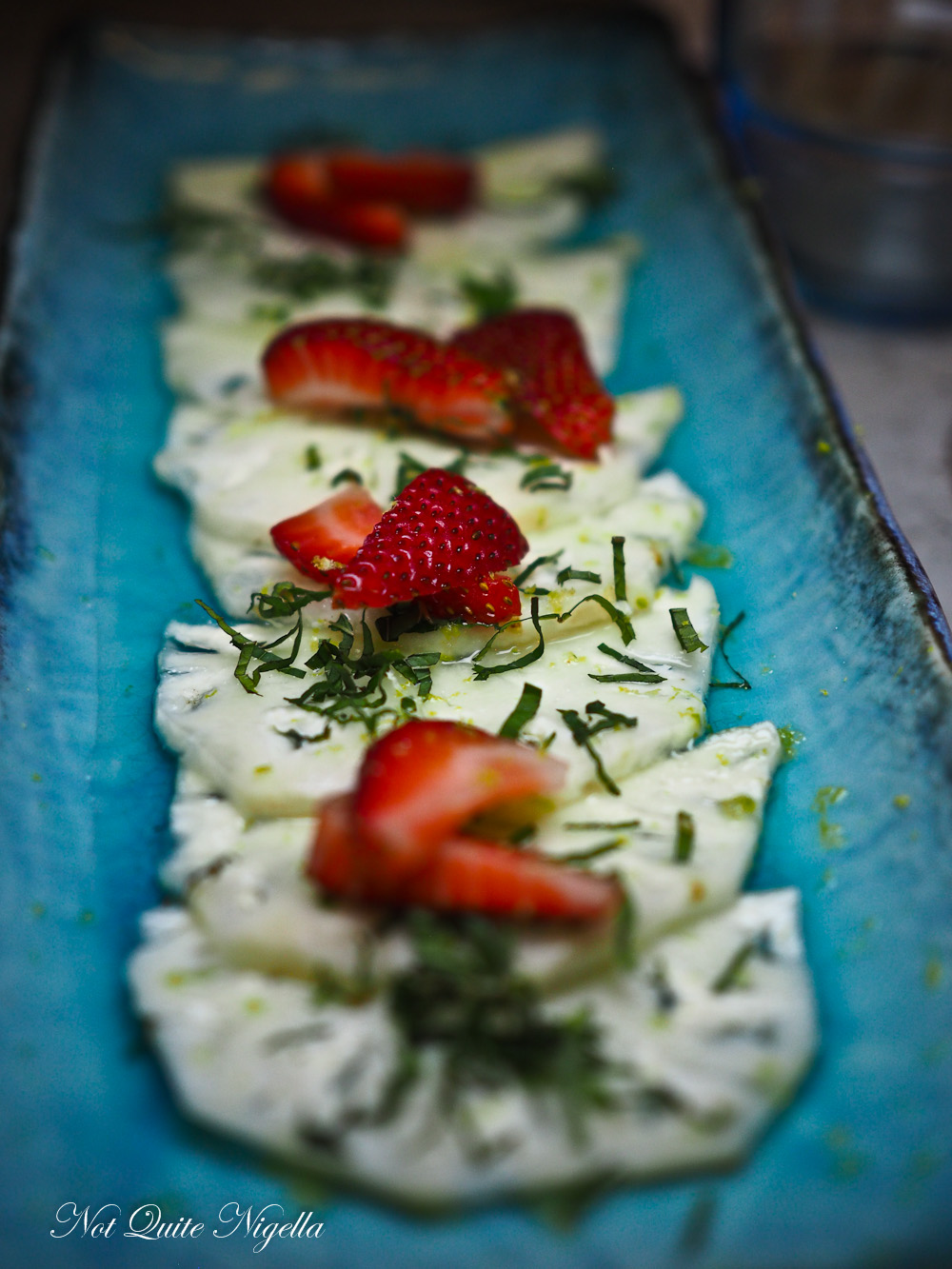 There are two desserts on the menu: one light and one sweeter and heavier. As it is so warm, the pineapple sweet sheets are a fitting dessert. With spiced rum, vanilla and ginger cured pineapple with mint and fresh strawberries it's simple, refreshing and a good end to a rich meal. 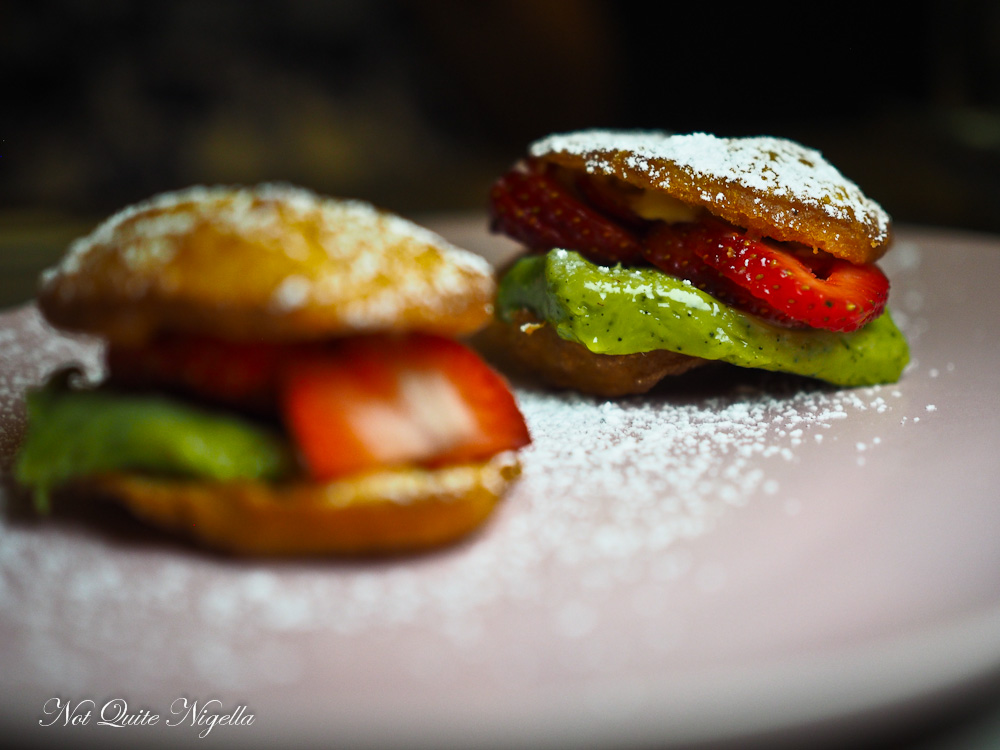 Viggo's pick is the sweet burger. Made with two sweet potato donuts and filled with Japanese whisky cream and soft matcha or green tea white chocolate and sliced strawberries it's crunchy, soft and sweet. Very sweet indeed with the thick, soft matcha white chocolate but I am overruled by the boys who enjoy it immensely.

So tell me Dear Reader, what is your ideal suburb and do you live in it? Would you prefer the lighter dessert or the sweeter one? And should I be ordering more vegetarian dishes?