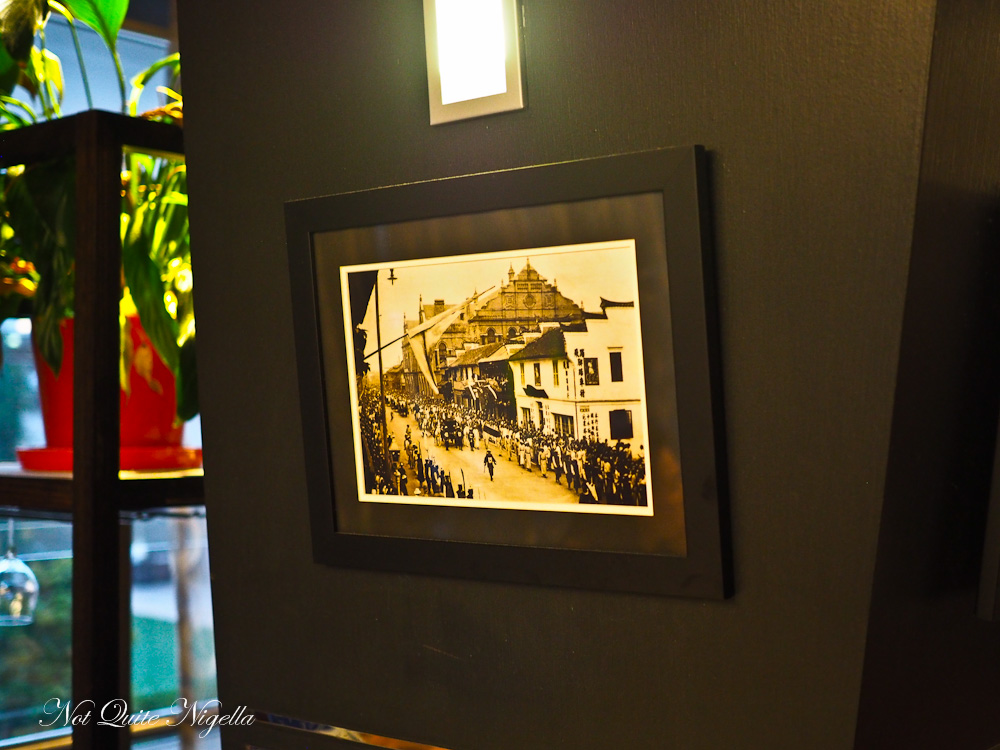 When my father's birthday on the first of January rolls around, I've spent a whole year scouring for a new Chinese restaurant to celebrate it at. And by November I had it: Shanghai Stories 1938, a Chinese restaurant in Chatswood that specialises in Chinese seafood. The Chinese restaurant pick serves two fold reasons-he loves it and they tend to the the only restaurants open on the 1st of January. I know my dad well enough - while he'll try and appreciate another cuisine, you know that deep down, he is squirming and really hoping that we'll just leave him along with a bowl of rice and stop the strange birthday singing and cake.

The name Shanghai Stories 1938 suggests a significance to the year although when we ask, they tell us that it was just added for style. It's part of the Taste of Shanghai group of restaurants and is their only seafood restaurant whereas the others tend to be faster foods and dumplings. 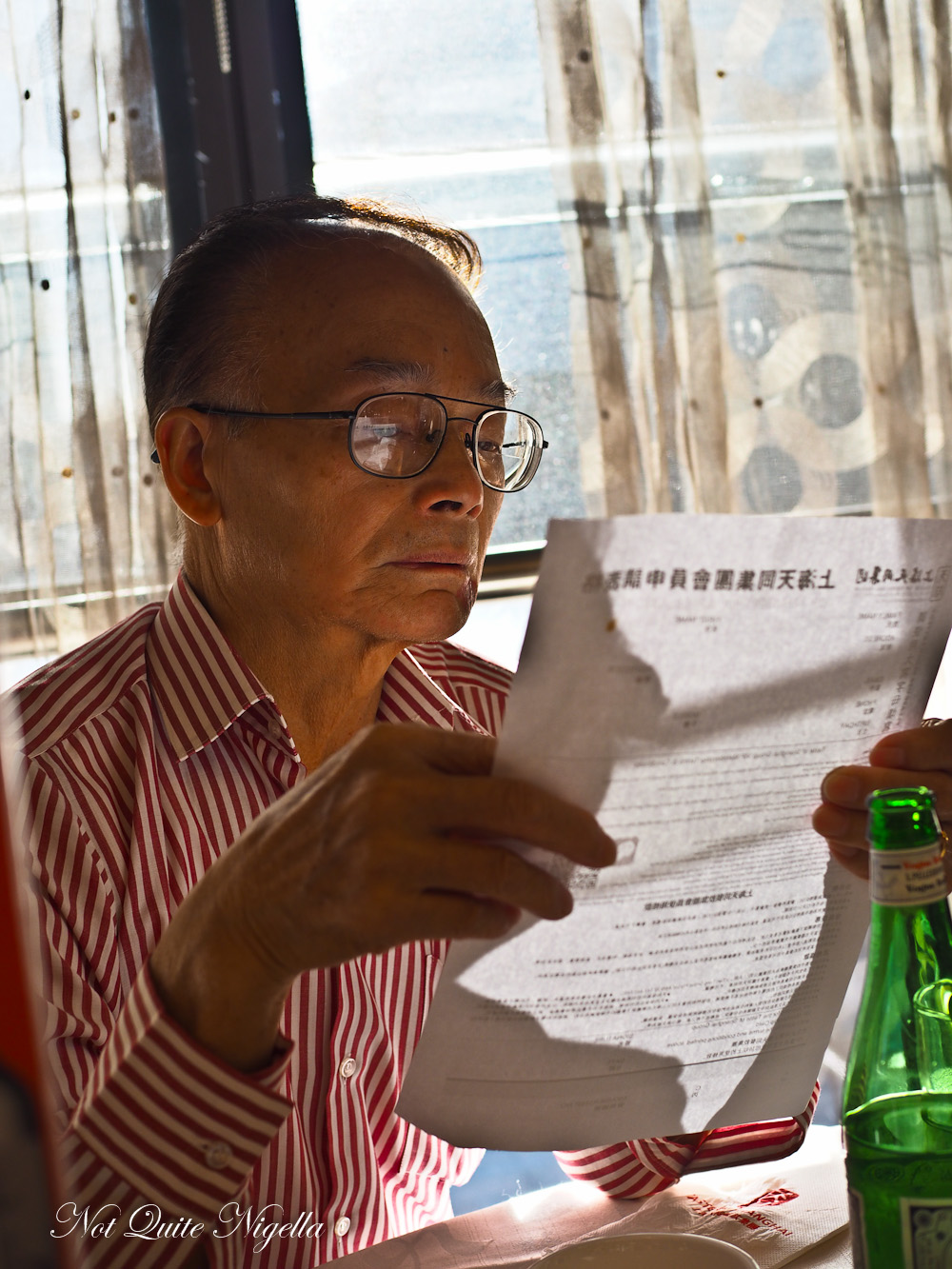 There are two levels to the restaurant and we are shown upstairs. It's not a particularly large and sprawling restaurant and is more narrow than expected. We take a seat and are handed two menus, the large colourful picture menu as well as a sheet detailing the live seafood tank prices. We decide to go for some classics as well as some Shanghainese choices. My sister Blythe spots the members offer that says that if you join you get a free bun on your birthday. Excited by the prospect she signs my parents up (it's $100 and you can get the $110 credit and use it on the day so it seems worth it) and you also get the member's prices on all food at all of the outlets except for the live seafood. My father pockets the pen quietly, "They left it here," he says when we ask him. 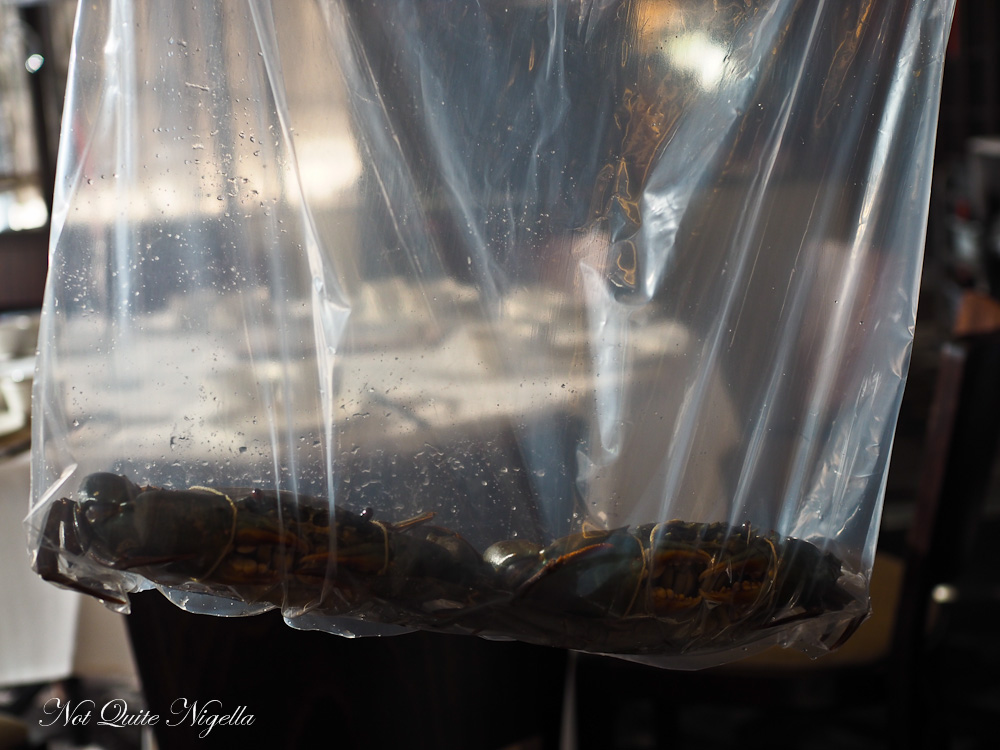 My father stares at a non Asian couple at another table, "They can use chopsticks, why can't you use chopsticks?" he says nudging my sister. There is a little routine whenever we go out for Chinese food. My sister asks for a fork and spoon because she doesn't like using chopsticks (too much time and too little food) and the waiter usually comes back and puts the fork and spoon on Mr NQN's setting assuming that he as the Caucasian person has asked for them (he is actually great with chopsticks). This time the waiter brings them to her and then offers another set to "Anyone, anyone?" while staring at Mr NQN. "He wanted to give me the fork and spoon," whispers Mr NQN. "Totally," I answer. 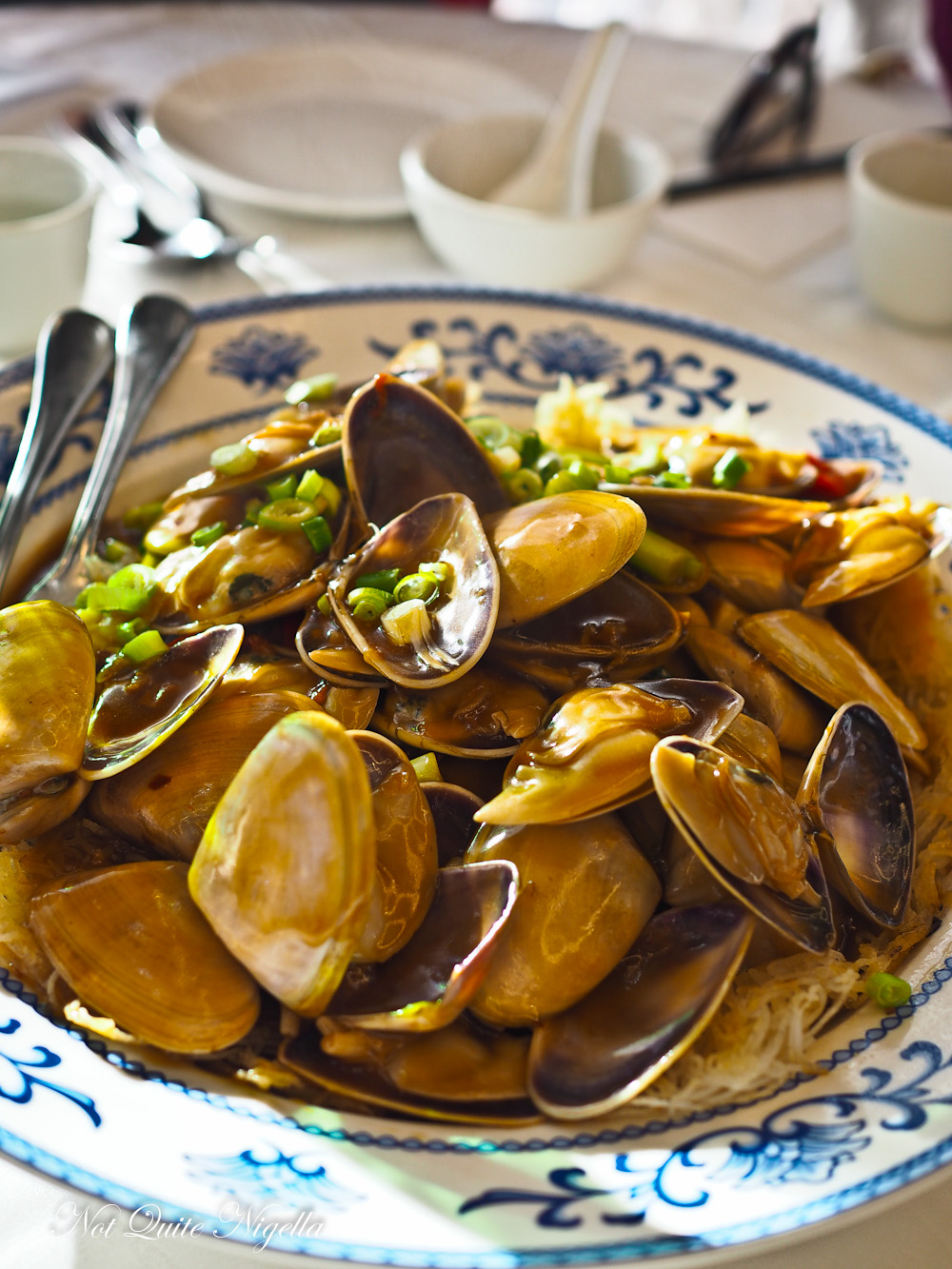 We ordered two items first while deciding what else we wanted. The pippies arrive first and they're enormous. I've never seen pippies this large and the meat extends to the edges of the shell. They come with crispy vermicelli noodle cakes and plenty of rich, flavoursome sauce. I have to stop myself because this dish is incredibly rich and I know that we have a lot to come. 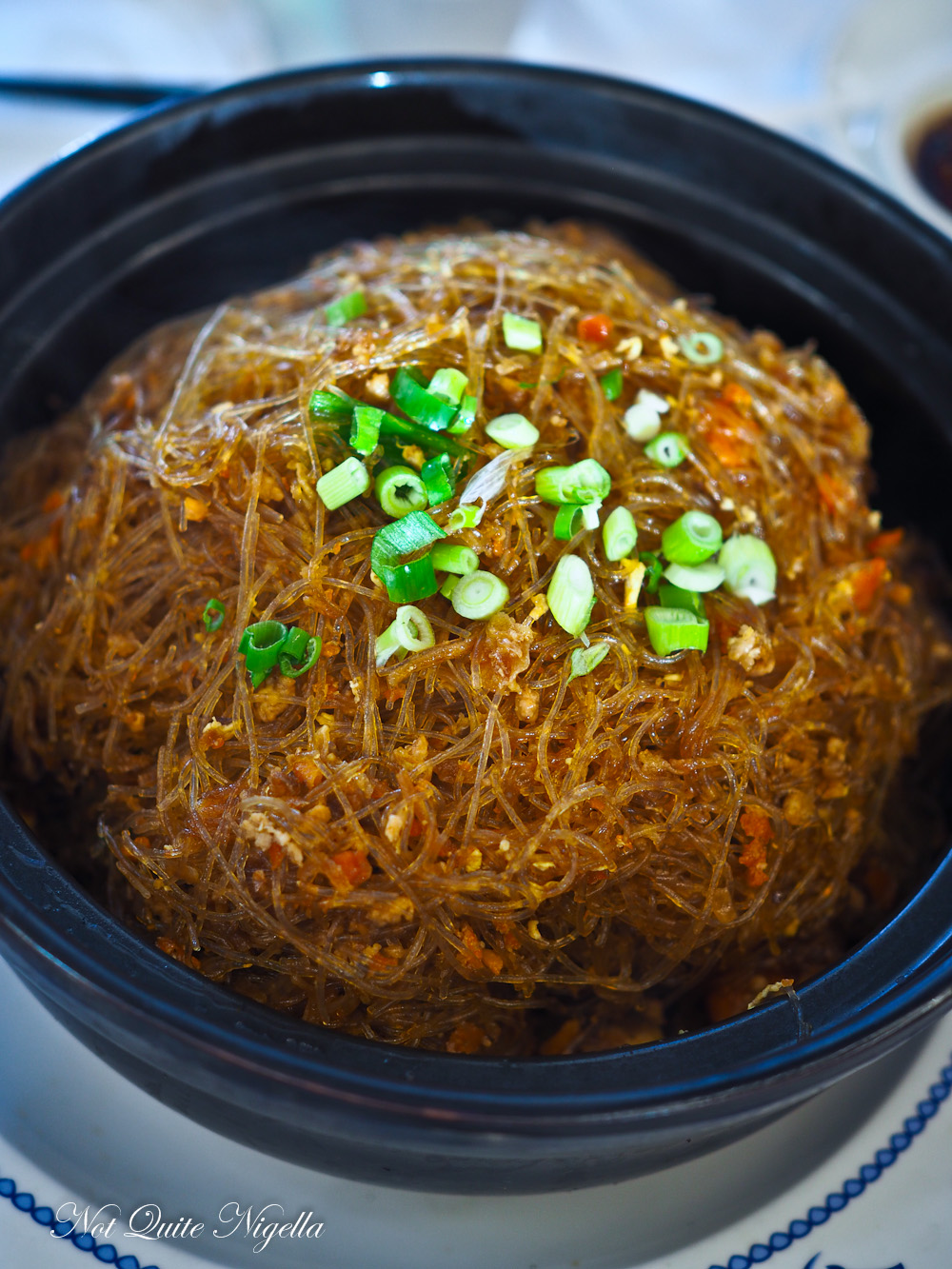 The price per kilo of mud crab is $138 which is expensive but they tell us that we can have female crab which is nice because my mother and I love the roe. There is a generous amount of roe scattered through the tangle of vermicelli and the crab meat is beautifully succulent and sweet. 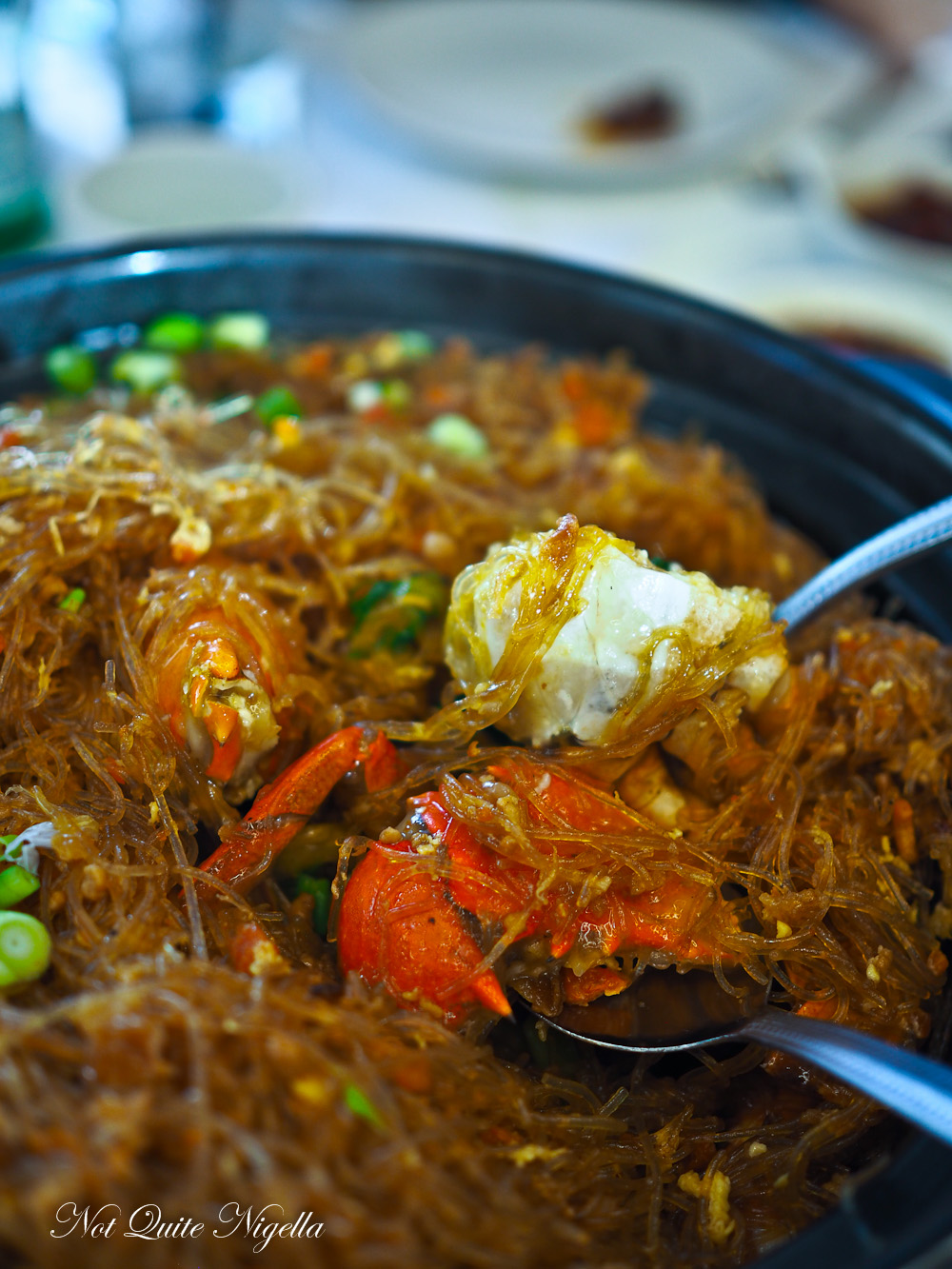 While we were eating we ordered the other dishes. Our waiter cocks his head and writes them down and then looks at me. "Now you've got pippies with noodles, crab with noodles, pork, noodles, vegetables...are you sure you need half a Peking duck?" I sensation of dejavu hits me and I swear on a stack of cakes that I've been told off by the exact same waiter for over ordering at another restaurant. 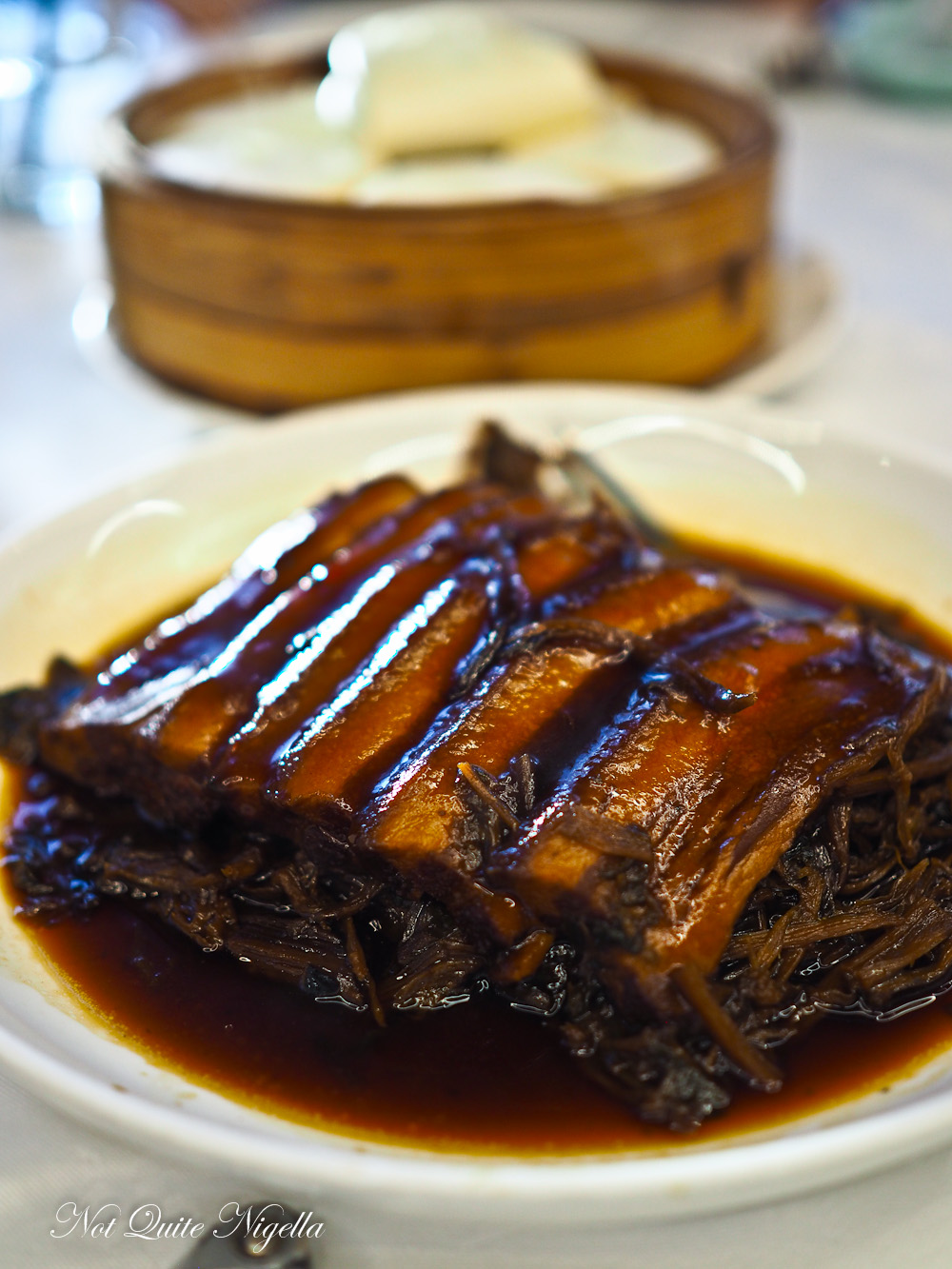 Pork is usually ordered along with noodles dishes for good luck at Chinese new year so we figure pork for new year in general is a good idea. Here it is braised with preserved green vegetables with a slight herbaceous medicinal taste (which I happen to love but I grew up eating these). The soy based sauce is slightly sweet and good for rice. You can take some of the vegetables and a slice of pork (there are six per serve) and fill the buns with them. Another goody.

"Oh it's nearly half past seven!" says my father looking at his watch. I know what he's thinking, just half an hour til bedtime.

As the restaurant swells with patrons in the midst of dinner, service can get a little absent minded and things like plates aren't cleared and empty bottles sit on the table. There's a bit of a wait for the last two dishes. I overhear the chopstick couple complaining about waiting for too long for a dish as they have a movie to catch. 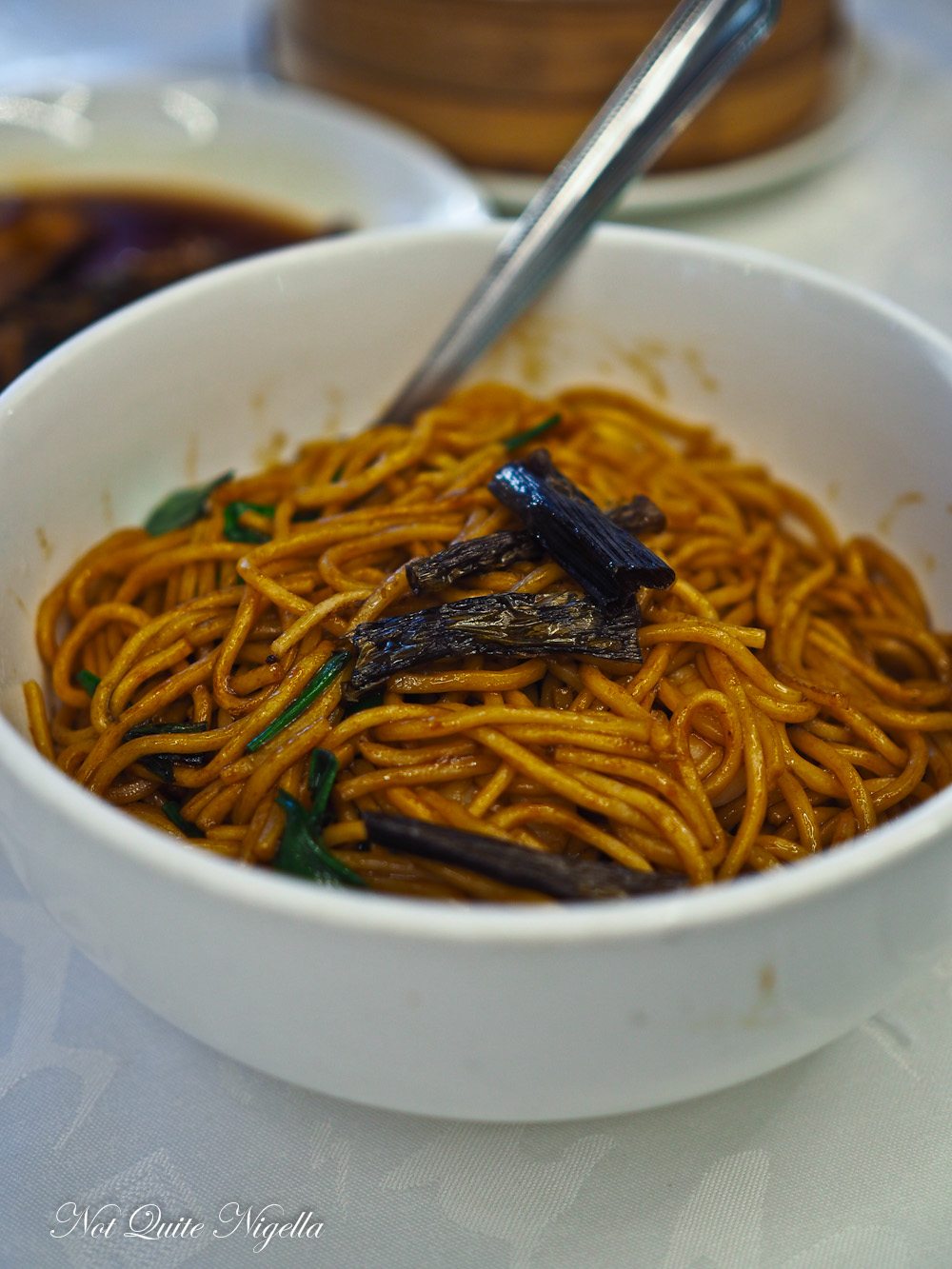 I loved the look of these noodles in the picture menu - while they don't really look much like the menu image they're delicious. Simply cooked and dressed with soy and shallot oil these hand pulled noodles have succulent prawns and a generous amount of them at that. Although they aren't quite arranged around the perimeter of the bowl as the picture would suggest. 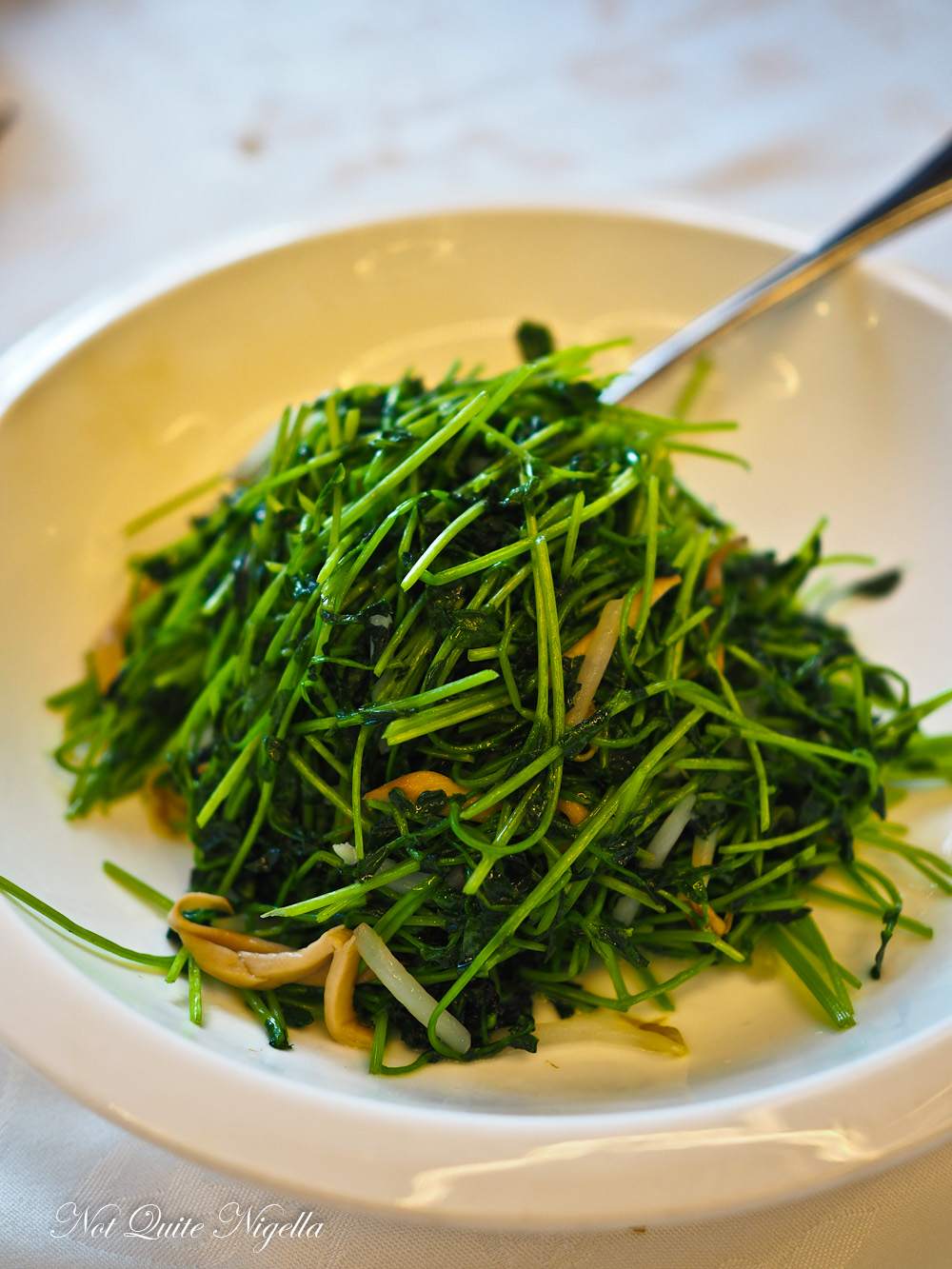 The last dish to arrive comes when everything else is finished. It is the snow pea sprouts. By now we are too full so we try a bit and then take them away with us. It's a shame as they're fresh and crunchy and well seasoned. 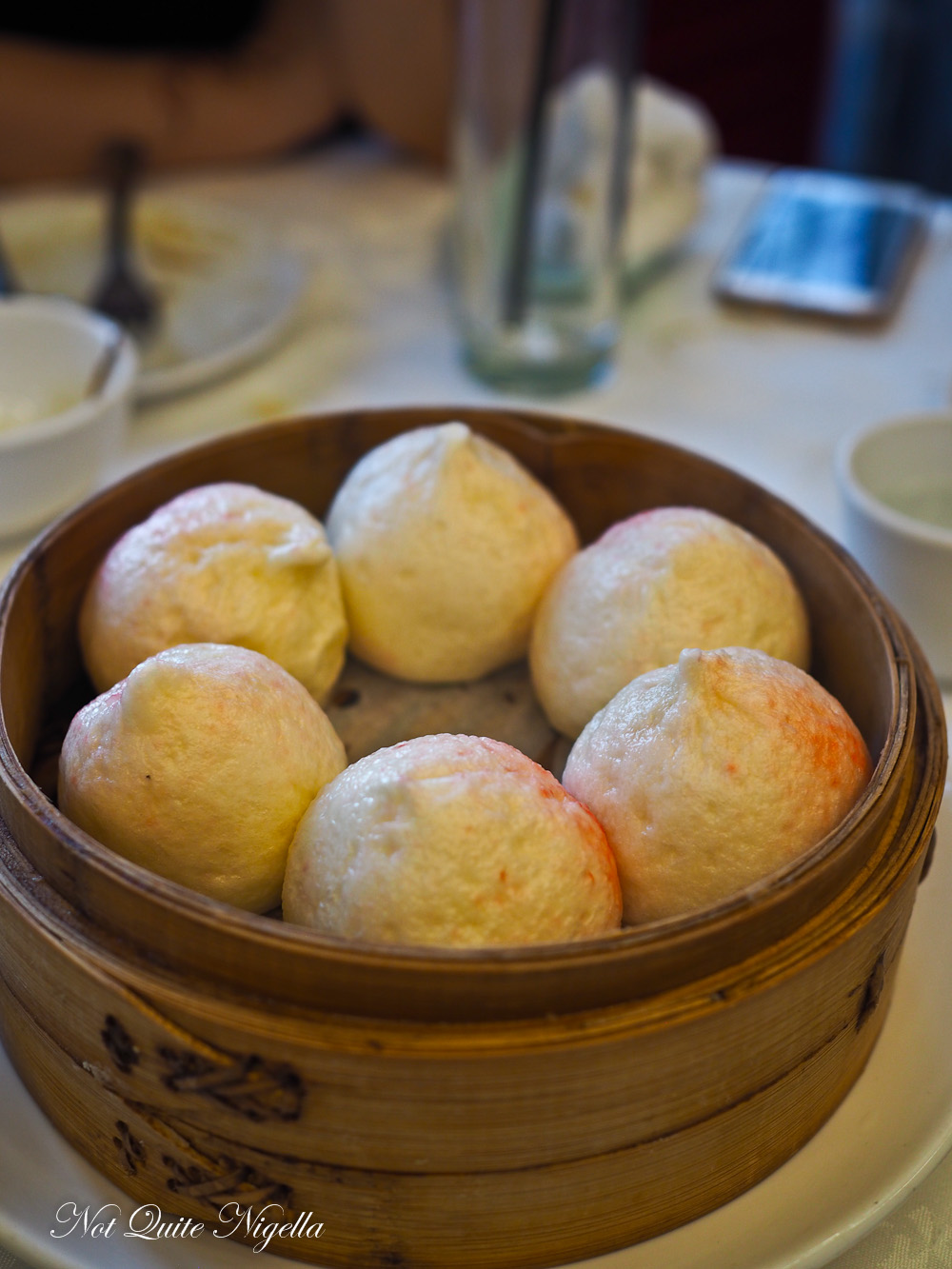 They tell us that they have a little surprise for my father's birthday. Since my parents are (newly minted) members the menu says that the birthday person gets a steamed bun on their birthday. The lotus buns are filled with a mixture of sweet lotus seed paste and grated salted egg yolk and they're soft and delicious. 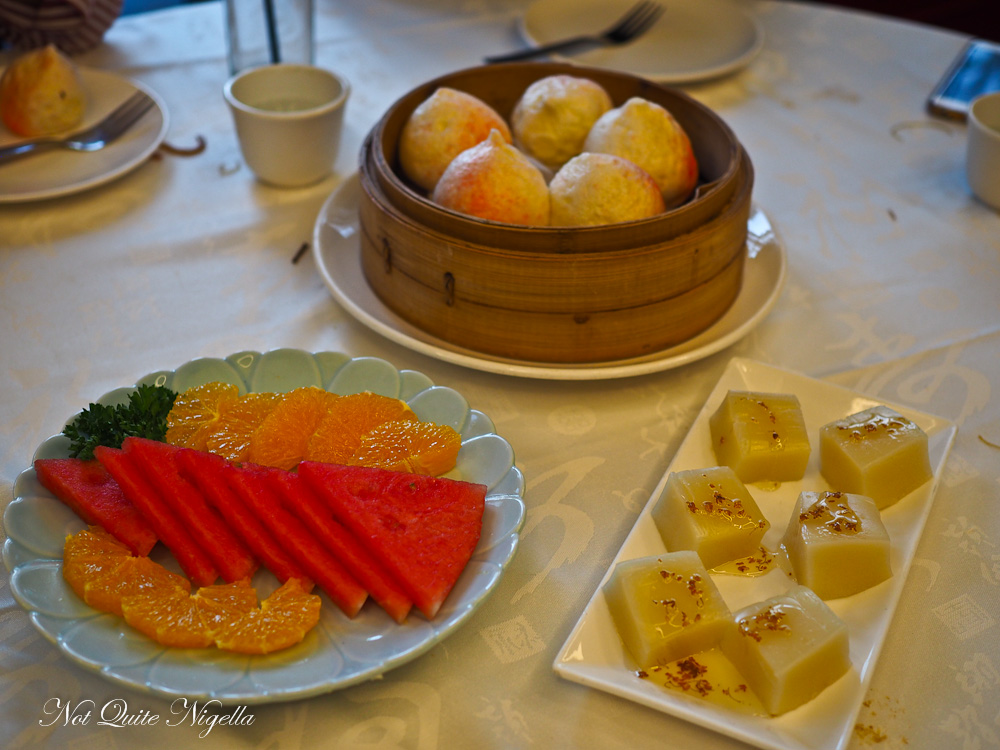 There's fruit too - watermelon and orange but to be honest I'm more smitten with the Osmanthus rice jelly. Similar in texture to chewy new year cake made with rice flour the flavour is not of caramelised brown sugar but rather the delicately fragrant dried osmanthus flower that is served in a syrup atop the chewy cubes. 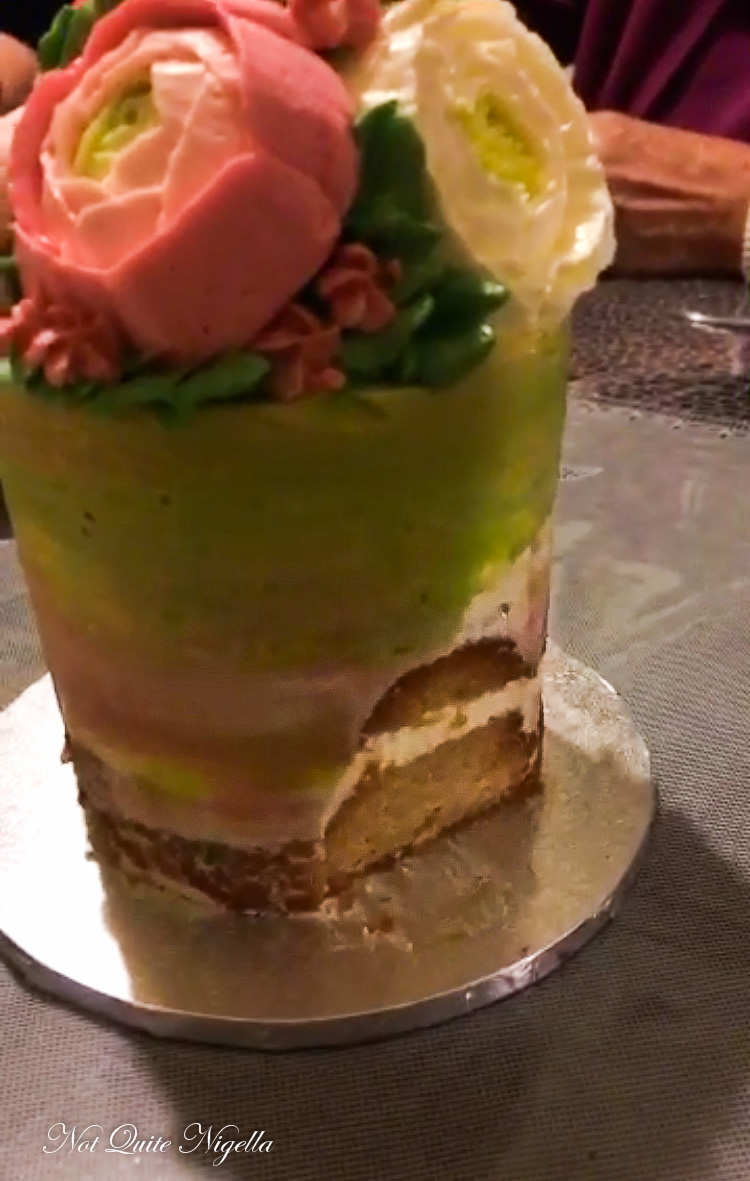 When my father cuts the cake...

We go home to partake of the cake, the smaller 10cm/4inch orange cake that I made with Jessica Pedemont a few weeks beforehand (I wrapped and froze it). "I'm glad this is a smaller cake," grumbles my father. "How do I cut it?" he asks before cutting off a slice-on the side of the cake. He seems quite content with his tiny bite sized piece but goes in for another square. "A second helping," he says. 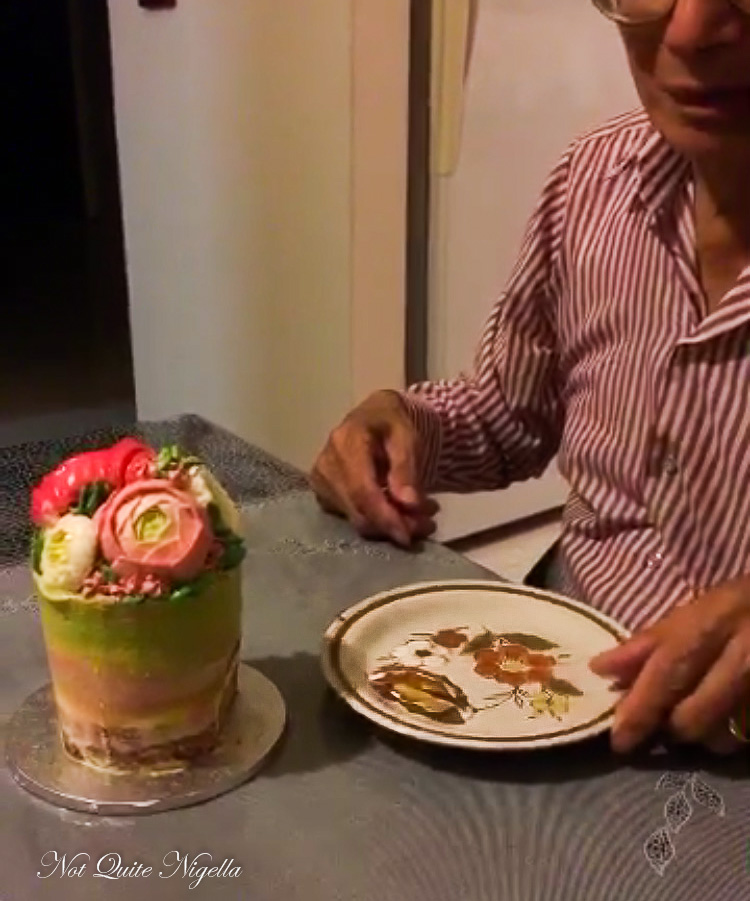 So tell me Dear Reader, are you good with chopsticks or do you go for a fork and spoon at Chinese restaurants? At what age did you first try chopsticks? And how do you feel when waitstaff tell you to order less? Or does that never happen to you?