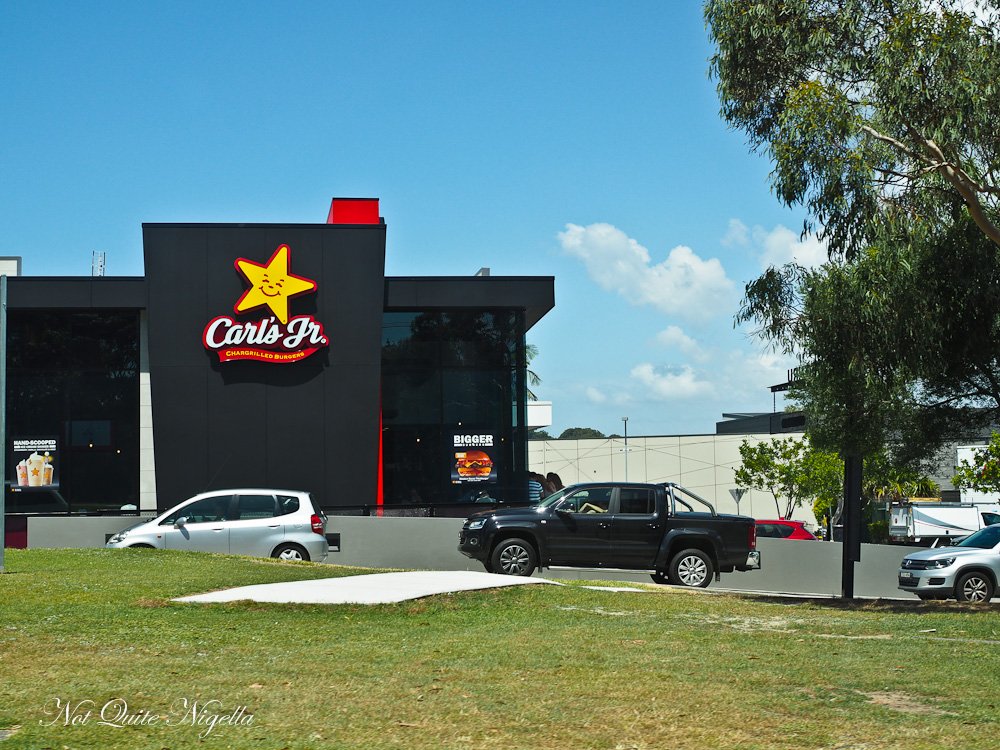 American fast food burger chain Carl's Jr. has arrived in Australia and their first location is in the regional , picturesque Central Coast town of Bateau Bay. Carl's Jr. is known for their provocative advertisements featuring Paris Hilton and Kim Kardashian and their tagline is also "It's gonna get messy." And just what is it like? 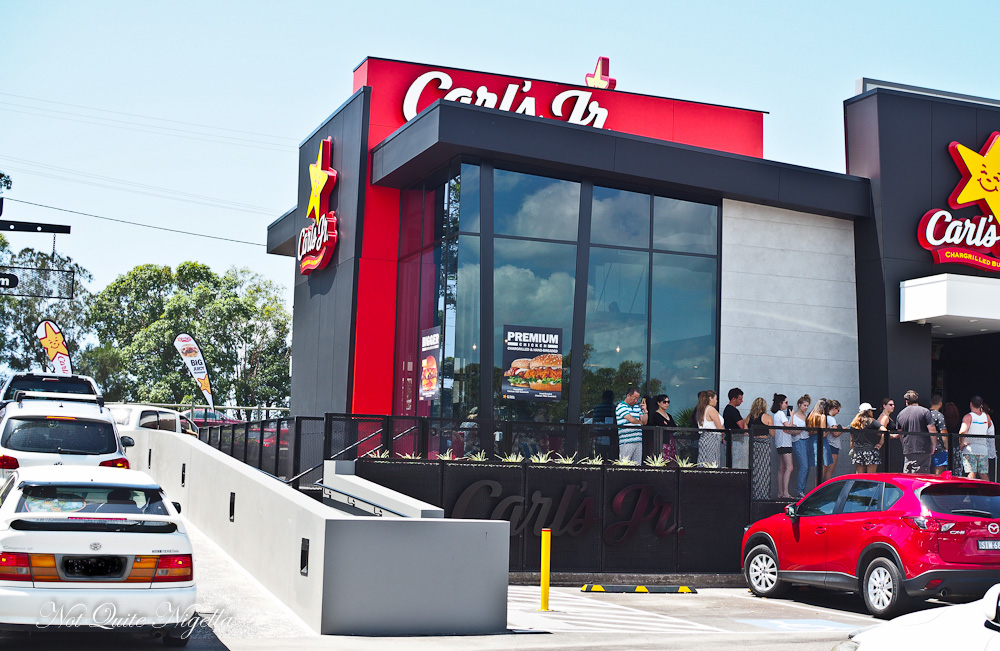 A silly part of me assumed that queues for food were more a city thing. The kind of thing that you would see on the streets of Sydney or Melbourne. So it's with a bit of daft surprise that when we pull up to Carl's Jr's first Australian branch in Bateau Bay on the Central Coast that I see the queues there too. At the end of the queue is a staff member at the door letting people in through the security posts. It's not quite the velvet rope but as effective as you wait in the sun for the crowd at the register to reduce down to four people before you're let in to Carl's Jr. 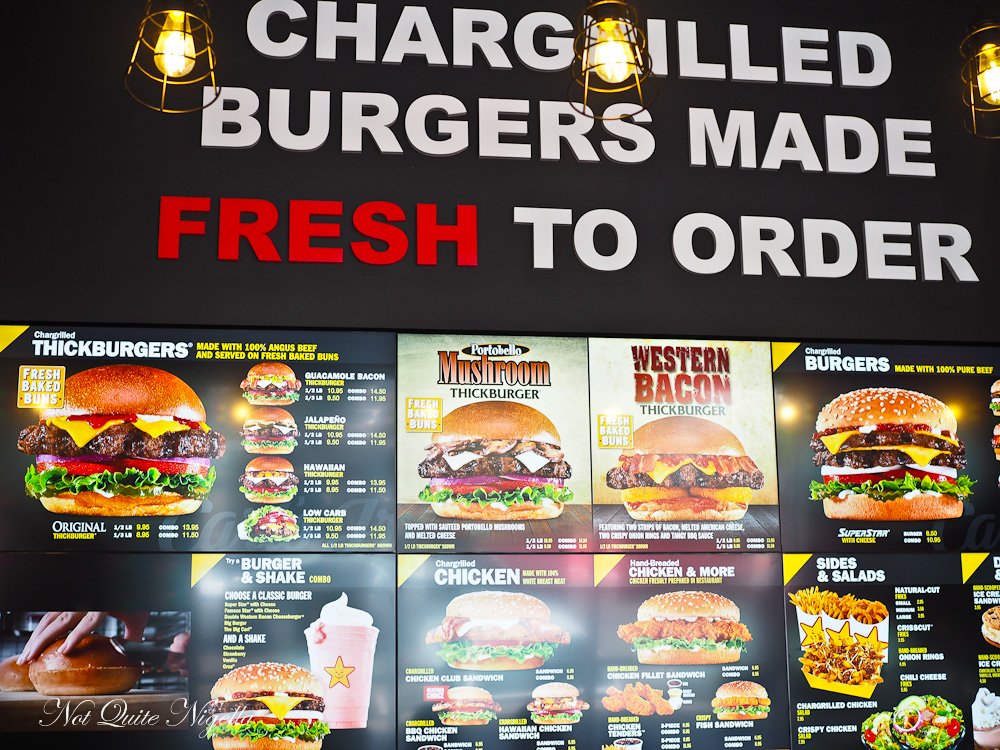 The location for Carl's Jr. is on The Entrance road smack bang right next to their closest competitor McDonalds. The staff tells us that this location came up and they wanted to test the systems here before launching in larger city areas. At 1pm high school students make their way across. Some line up at Carl's while the rest go towards McDonalds. There is also a drive through but this doesn't seem to be moving any faster and mindful of the slogan, "It's gonna get messy," we decide to eat in. 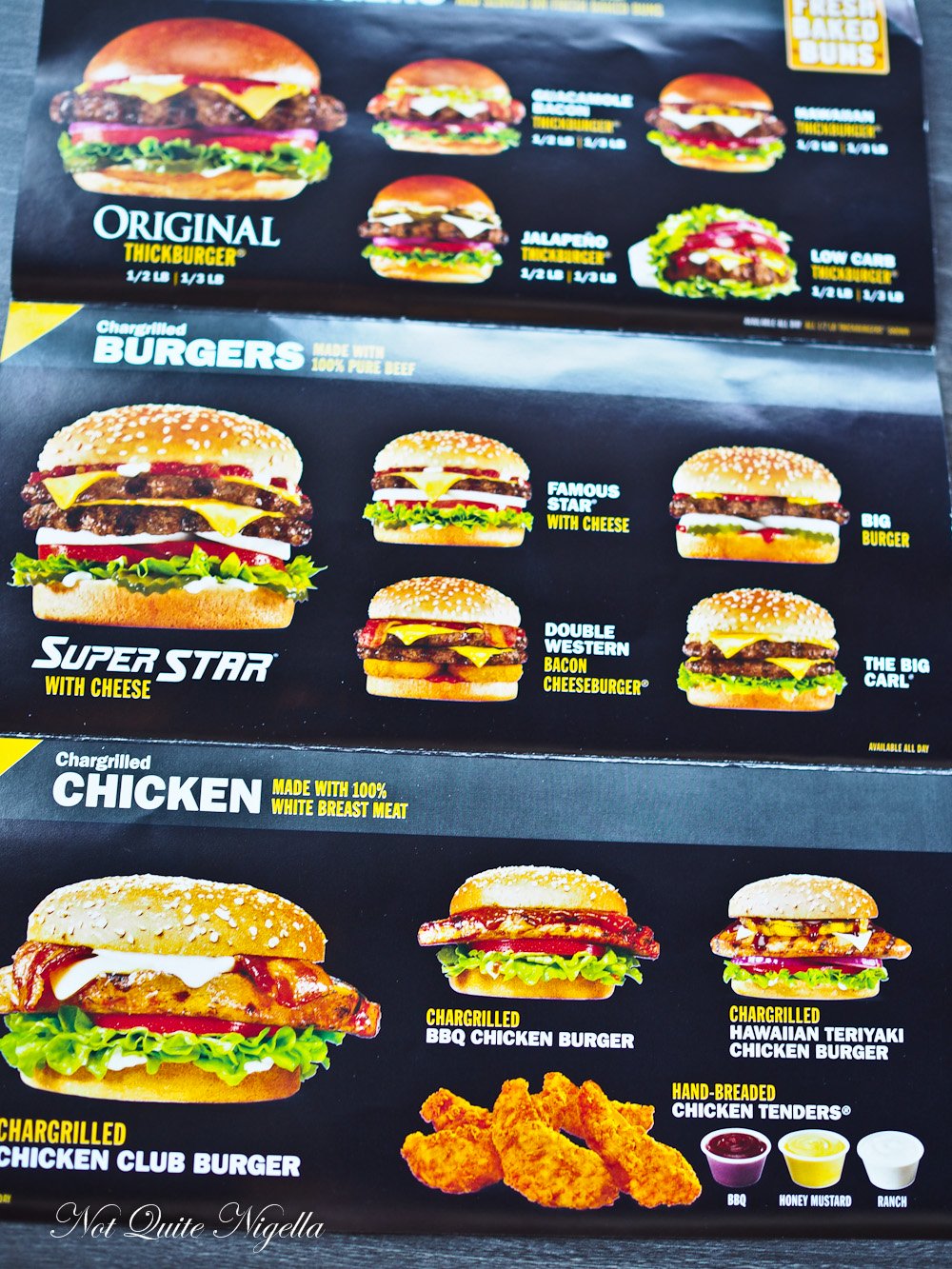 In California in 1941 Carl and Margaret Karcher started the food business with hot dog carts. This expanded to a restaurant serving hamburgers called Carl's Drive-In Barbeque. Two smaller restaurants followed and these were named Carl's Jr. denoting the smaller size of the restaurant. 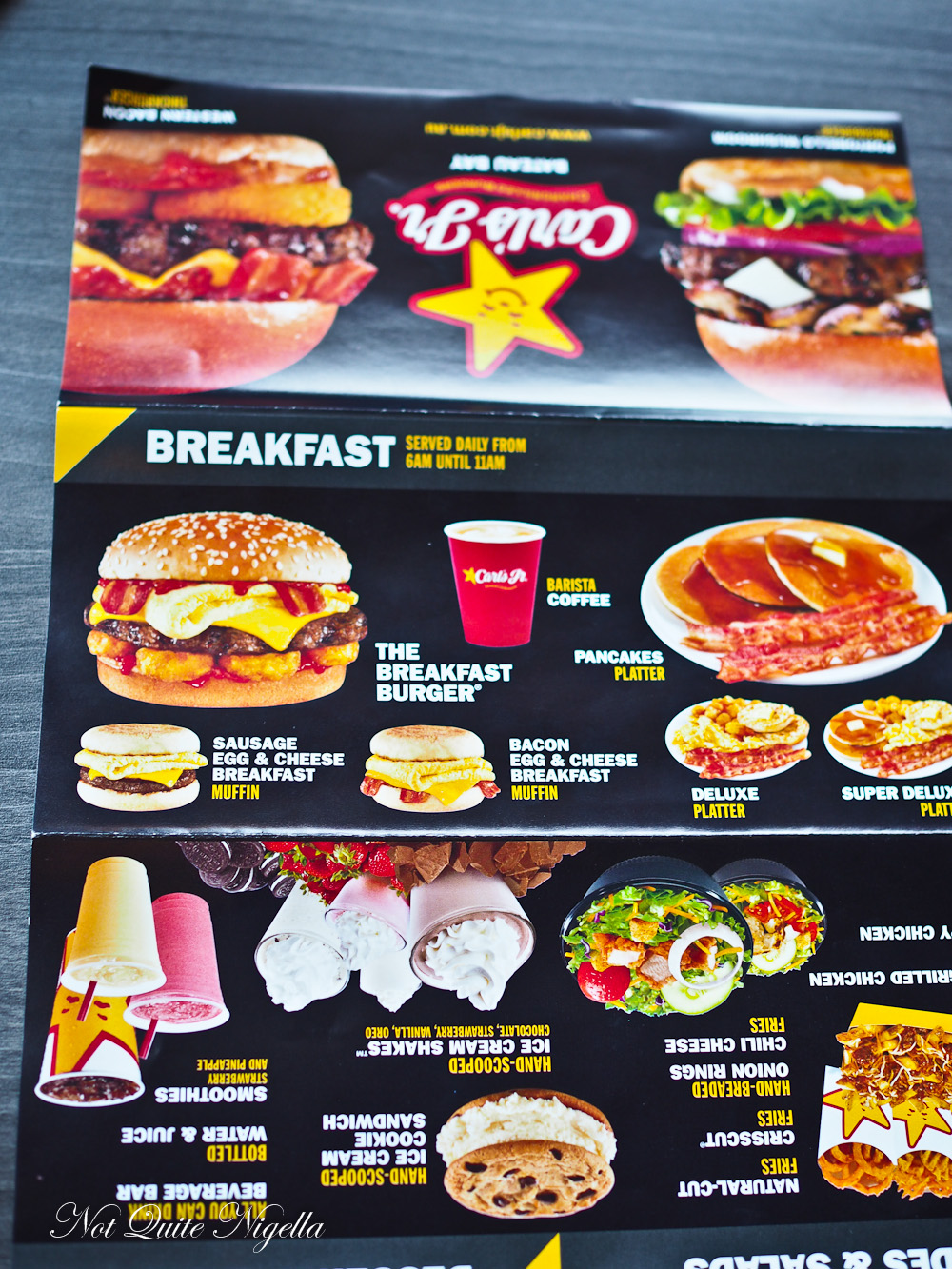 Known mostly for their provocative ads featuring Kim Kardsashian, Paris Hilton and Charlotte McKinney, I wasn't sure what to expect from the burgers. I line up while Mr NQN grabs a table. There are booths and share tables and although there is a queue outside it is easy enough to get a table. 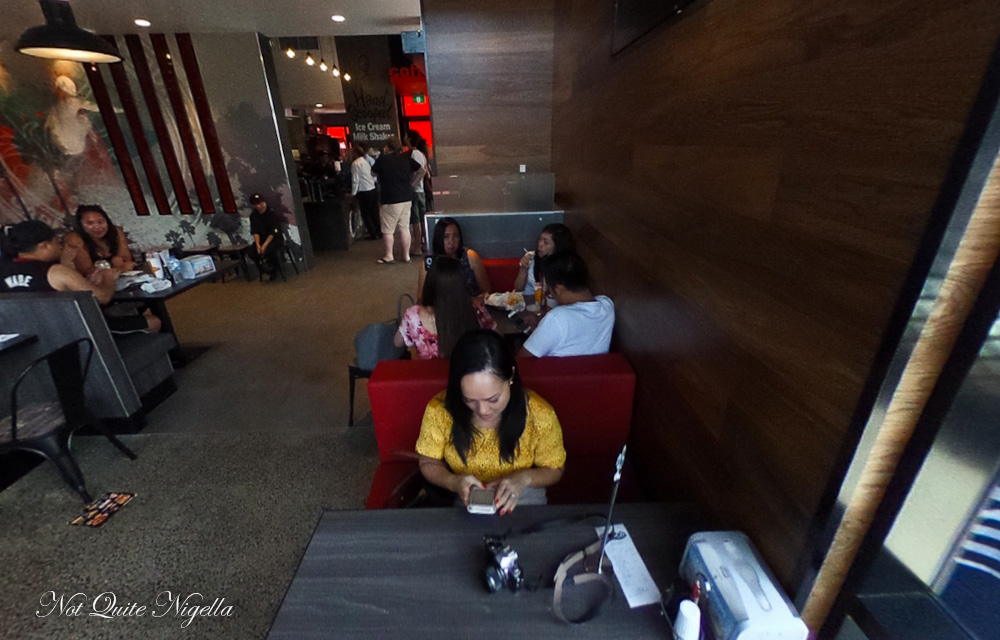 Back at the register I am overwhelmed with choice even though I was given a menu (sans price) while I was lining up. I order three burgers just to try one of each burger type and as I wanted to try the three types of chips I order them in a meal deal. The first type is a "thickburger" made with an Angus beef patty. The second is a 100% beef patty while the third is either a hand dipped chicken burger patty or a grilled chicken patty. The beef patties are either 1/3 or 1/2 a pound. There is no vegetarian selection as far as I can see - the portobello mushroom burger has a beef patty on it. 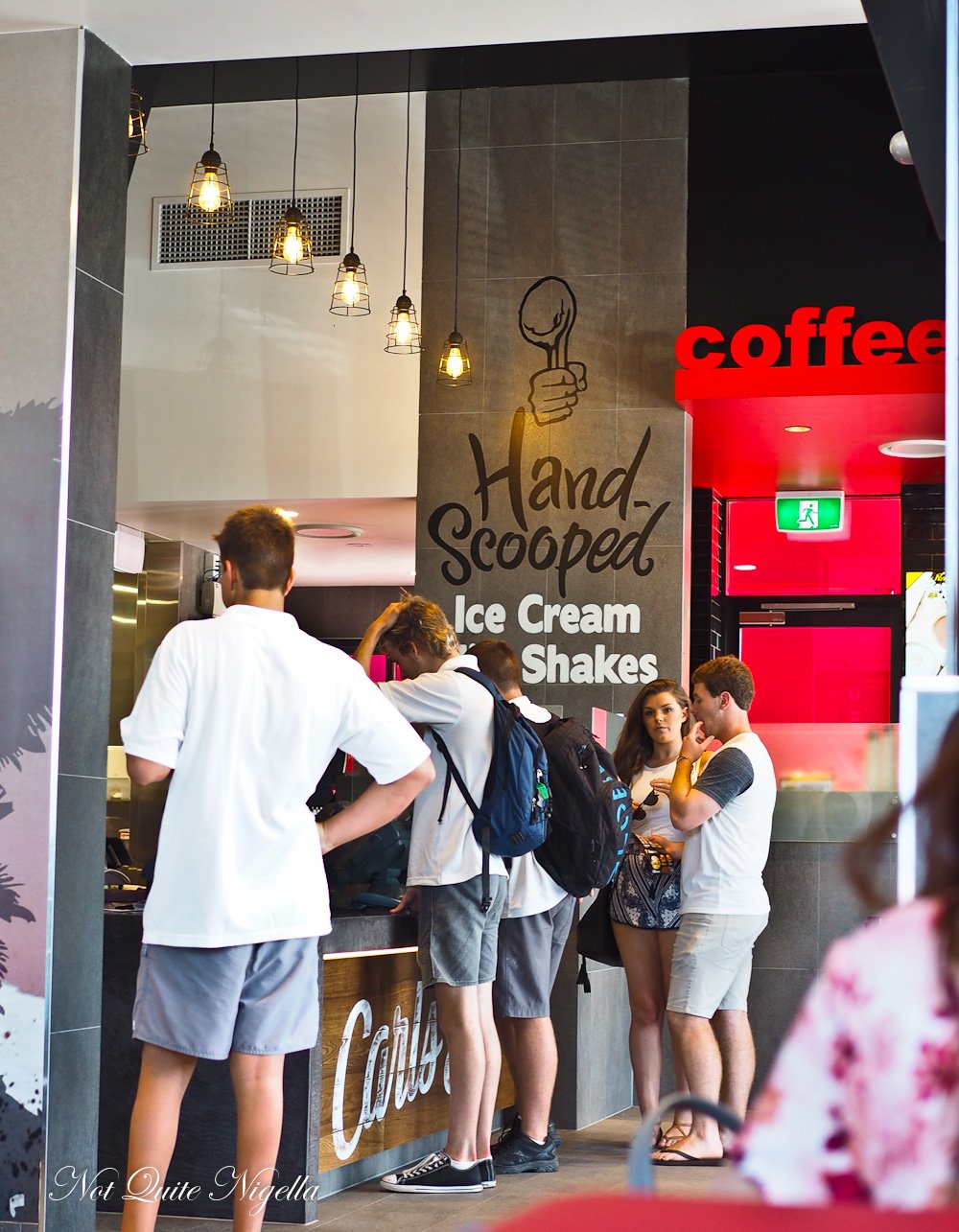 There are four different types of drinks: 1. ice cream shakes in flavours like chocolate, strawberry, vanilla and Oreo. 2. smoothies in strawberry and pineapple 3. Bottled water and juice and 4. an all you can drink soft drink bar. And for dessert there is a hand scooped ice cream cookie sandwich. There are also salads: a chargrilled chicken, crispy chicken or side salad. 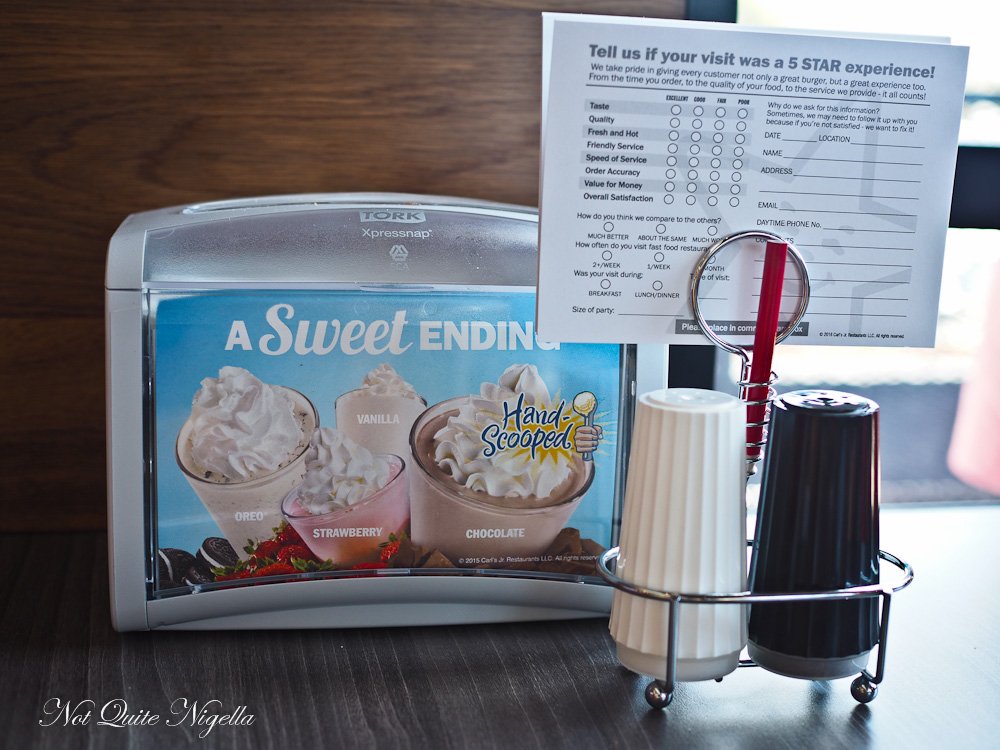 There is also a breakfast selection available from 6am-11am of pancakes, bacon, eggs, English muffins. Their breakfast burger has a beef patty, hash browns, egg, cheese and bacon on a sesame bun. There is also a sausage egg and cheese muffin and a bacon, egg and cheese muffin. And needless to say that there are no calorie counts on these because if you have to ask, like the adage says, you really can't afford it ;) It's here on their website if you are interested. 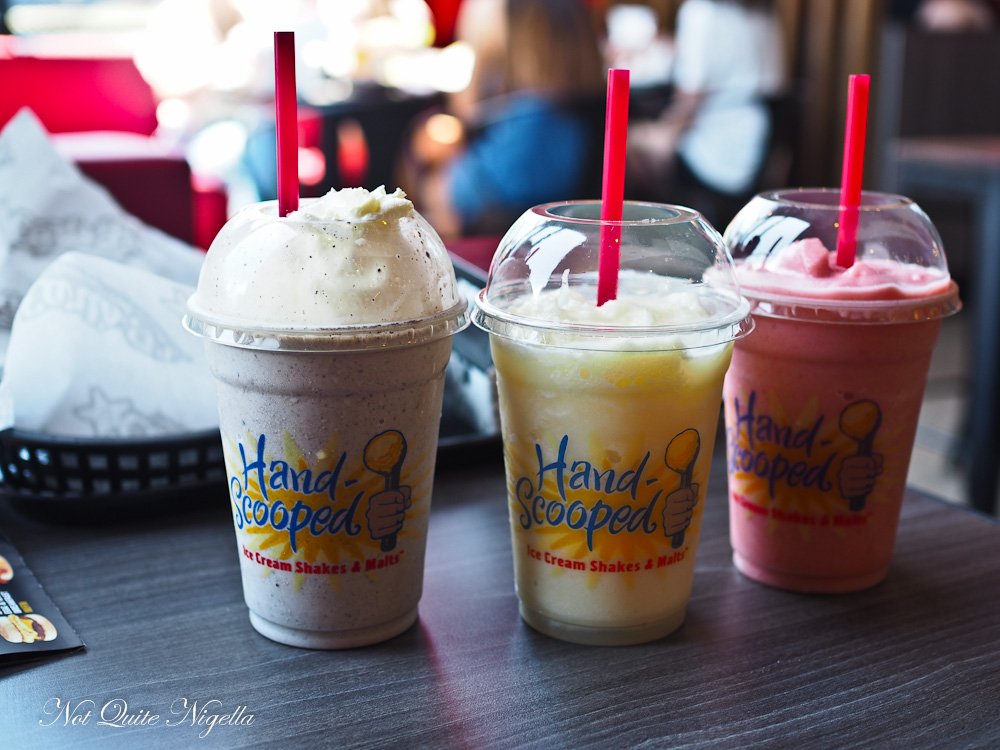 We take a seat with a number and they tell us that the staff will bring the food to our table. It takes a while, about 15 minutes for the food to arrive but they've been open for 3 weeks so maybe its teething problems. The drinks arrive first: I ordered three meals because I was told it worked out cheaper that way (around $15 for a burger, fries and a drink). The strawberry and pineapple smoothies are pretty good. They're not overly sweet and they taste like real fruit and not cordials. The Oreo hand scooped ice cream shake is really good and tastes wholesome with just the right amount of sweetness. 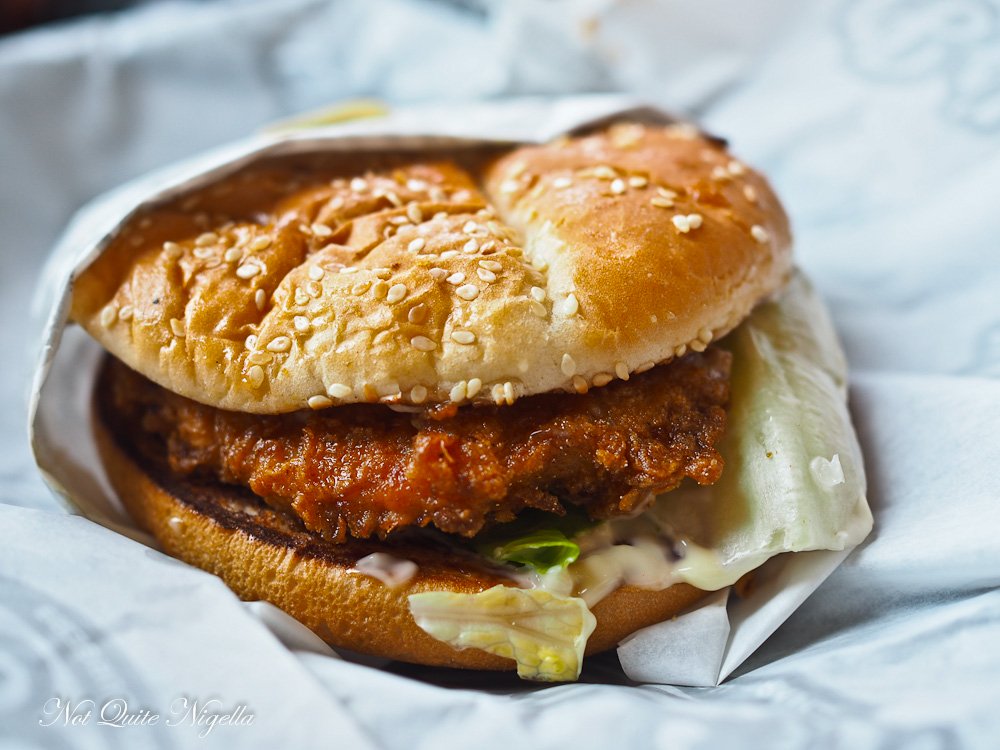 We were recommended the chicken sandwich which is not on the flyer menu but on the main menu. It's a hand breaded chicken fillet with iceberg lettuce on a sesame seed bun with mayonnaise. Mr NQN quite likes this but it's very much a fast food burger. 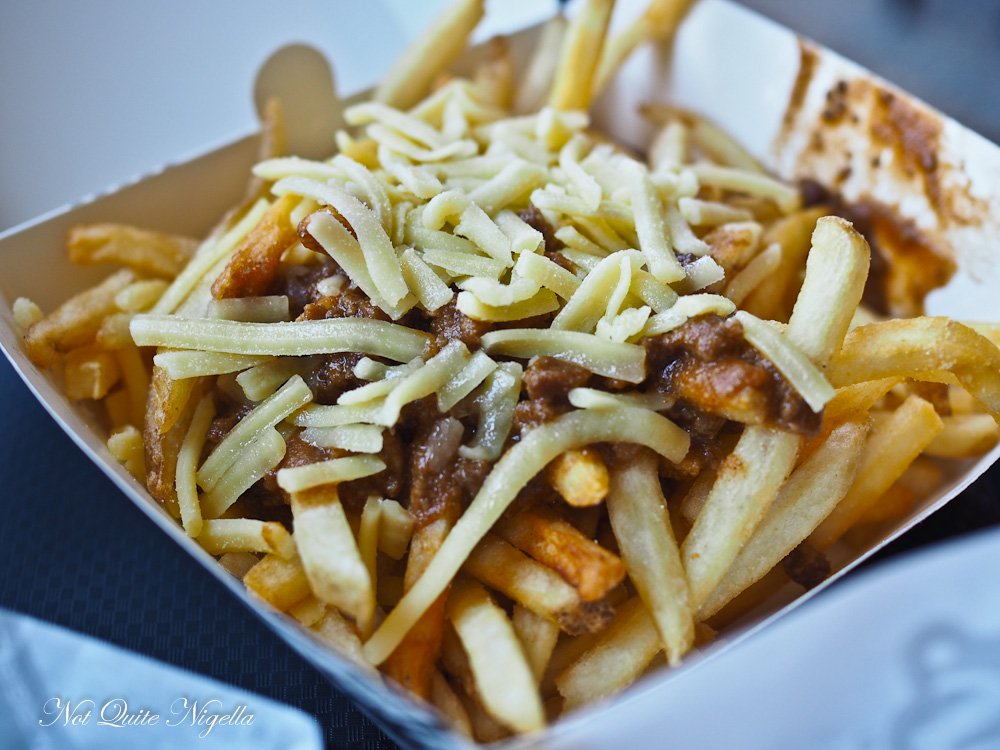 It comes with a box of chilli cheese fries. Once I open it up I am a bit surprised. The cheese on top is unmelted and the fries are stone cold. Not just lukewarm or warm but cold. I try the other fries. While the burgers are warm these too are cold. They offer to bring us a replacement but we just want a replacement for the chilli cheese fries. The replacement comes a few minutes later. They're the same fries just with more topping and reheated. The topping is spicy and the cheese melted but the fries just aren't right. It's as if they were simply warmed in a microwave to melt the cheese. They're soft (and it's not just the fries under the topping) and we leave this behind. 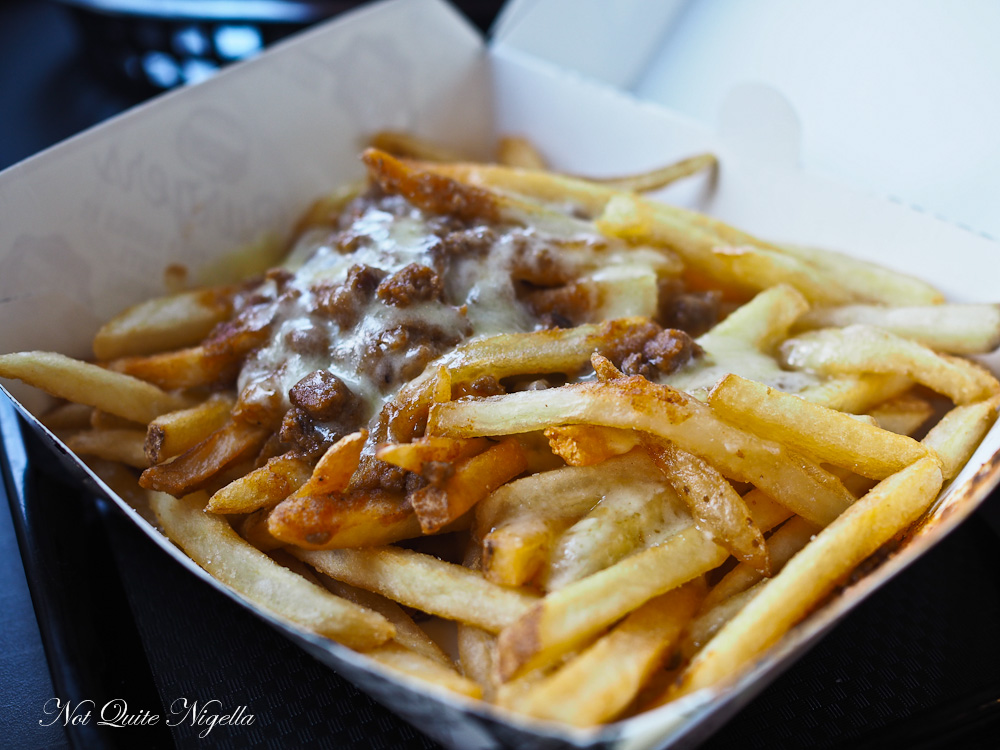 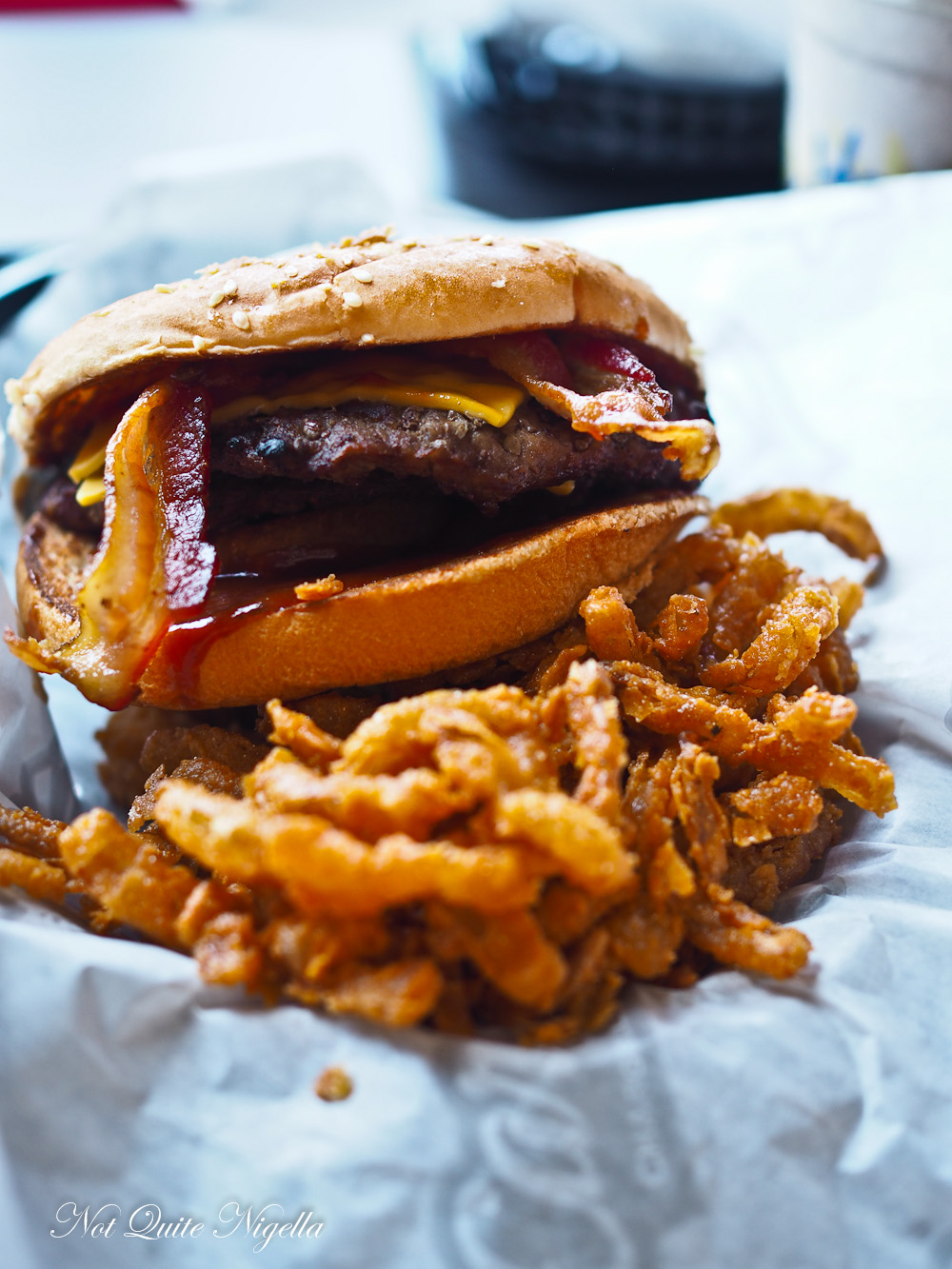 The double patty with double cheese, bacon and a layer of onion rings and a generous amount of bbq sauce is for people that love their meat and don't want vegetables in their burger. It's the burger equivalent of a bbq meatlovers pizza - smokey, saucy and meaty. It comes with onion rings which we are told are made from scratch and the staff spend hours cutting and dipping the rings. 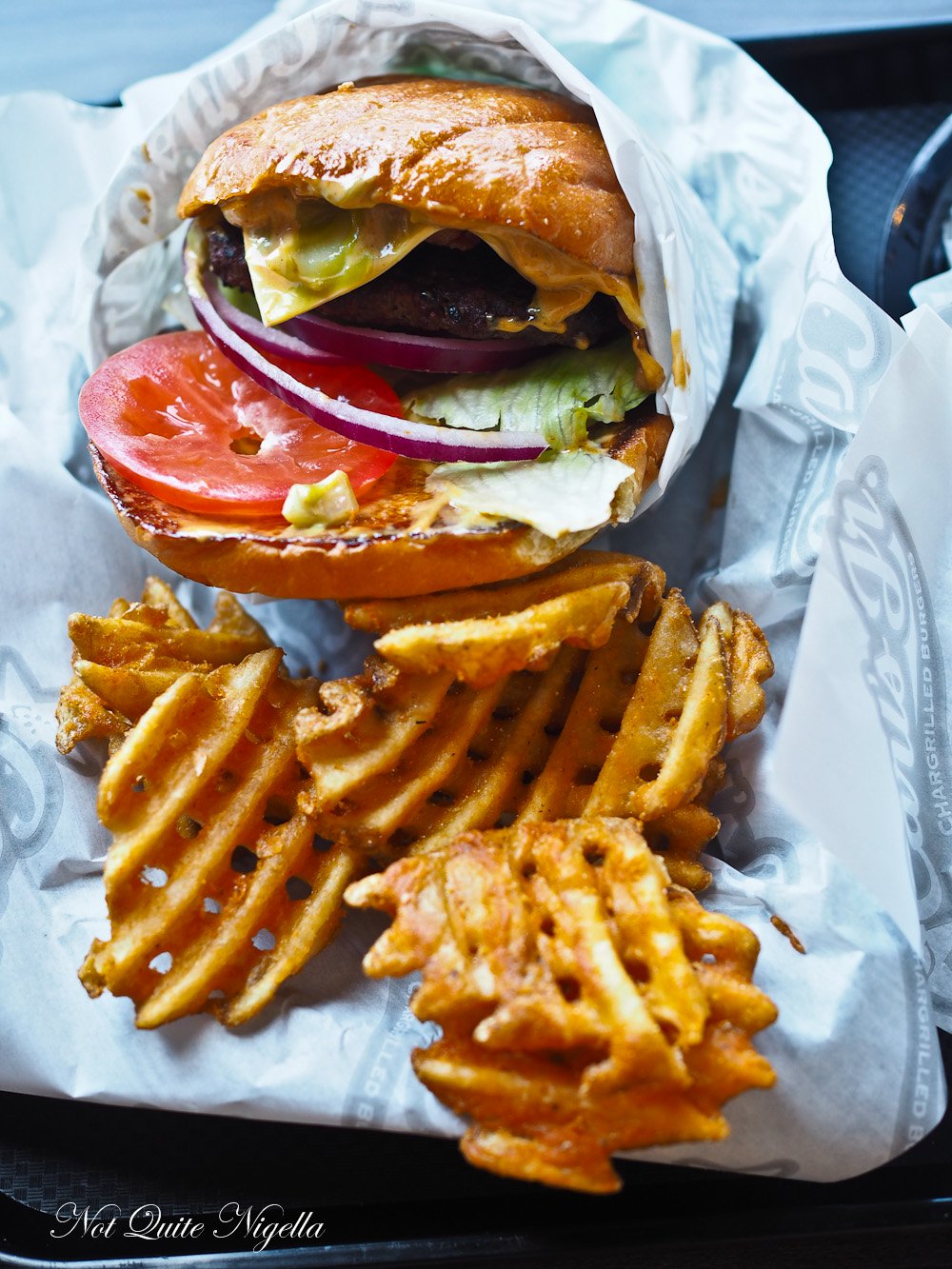 I try the guacamole bacon thickburger with a layer of guacamole, cheese, bacon, a 1/3lb Angus patty, tomato and lettuce. And out of the three it's my favourite. It's juicy and the bacon and avocado and salad add a lot to the burger and tastes the least like a fast food burger of the three. This burger comes with crinkle chips but as they are cold I leave these behind.

So tell me Dear Reader, would you send fries back if they were cold? Or would you eat them? Do you have a favourite fast food place? Where are your favourite burgers from?