Burgers at Belfield on Botany, Rosebery 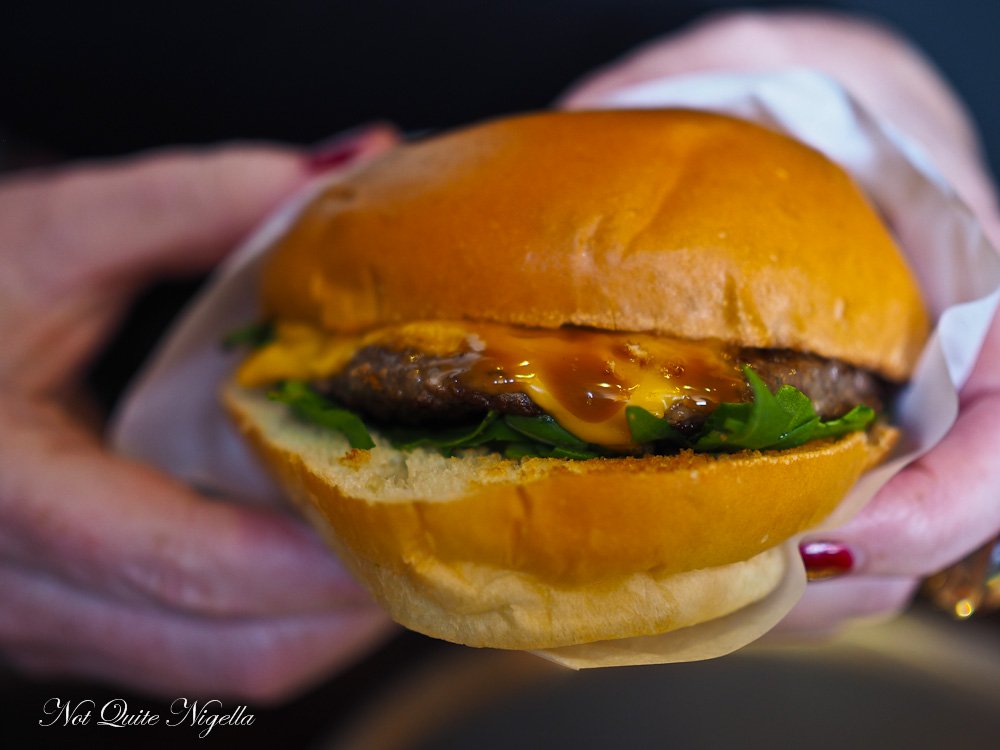 Sydney is certainly not short on burgers and just when you thought you had tried them all, then a new burger shop pops up. Belfield on Botany is located on Botany Road in Rosebery and has an Asian or Australian twist to their burgers. Think beef patty, cheese, rocket and Vegemite mayo or a peanut butter pork patty with kimchi, slices of green apple and a home made mayonnaise. All washed down with freshly pressed juice!

Sometimes when you hear a lot about a person, you build up an expectation of them. And ever since Belinda met Ringo (I can see that as a movie title), she has told me all about him and his job. I'm not allowed to mention his actual job for security reasons but it's absolutely fascinating and a matter of national security. 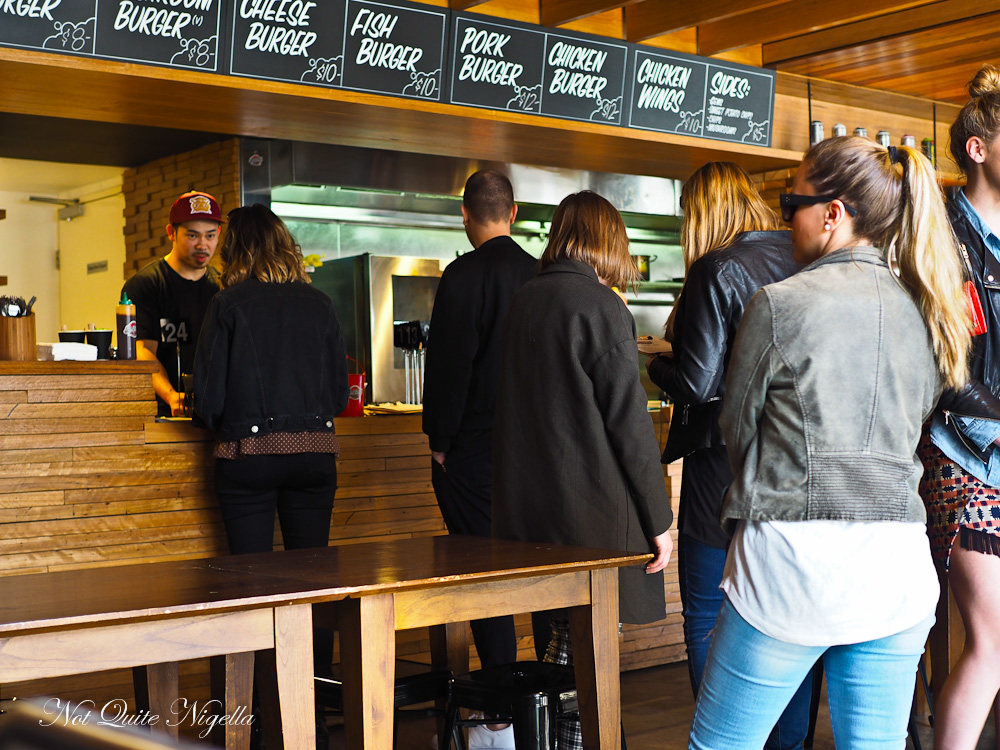 I wasn't sure what to expect of him before meeting him but when we met he was nothing like what I thought his job was like. Easygoing and chatty he and Belinda seem like a great match which made me glad to see and stopped worrying about my friend's lovelife. 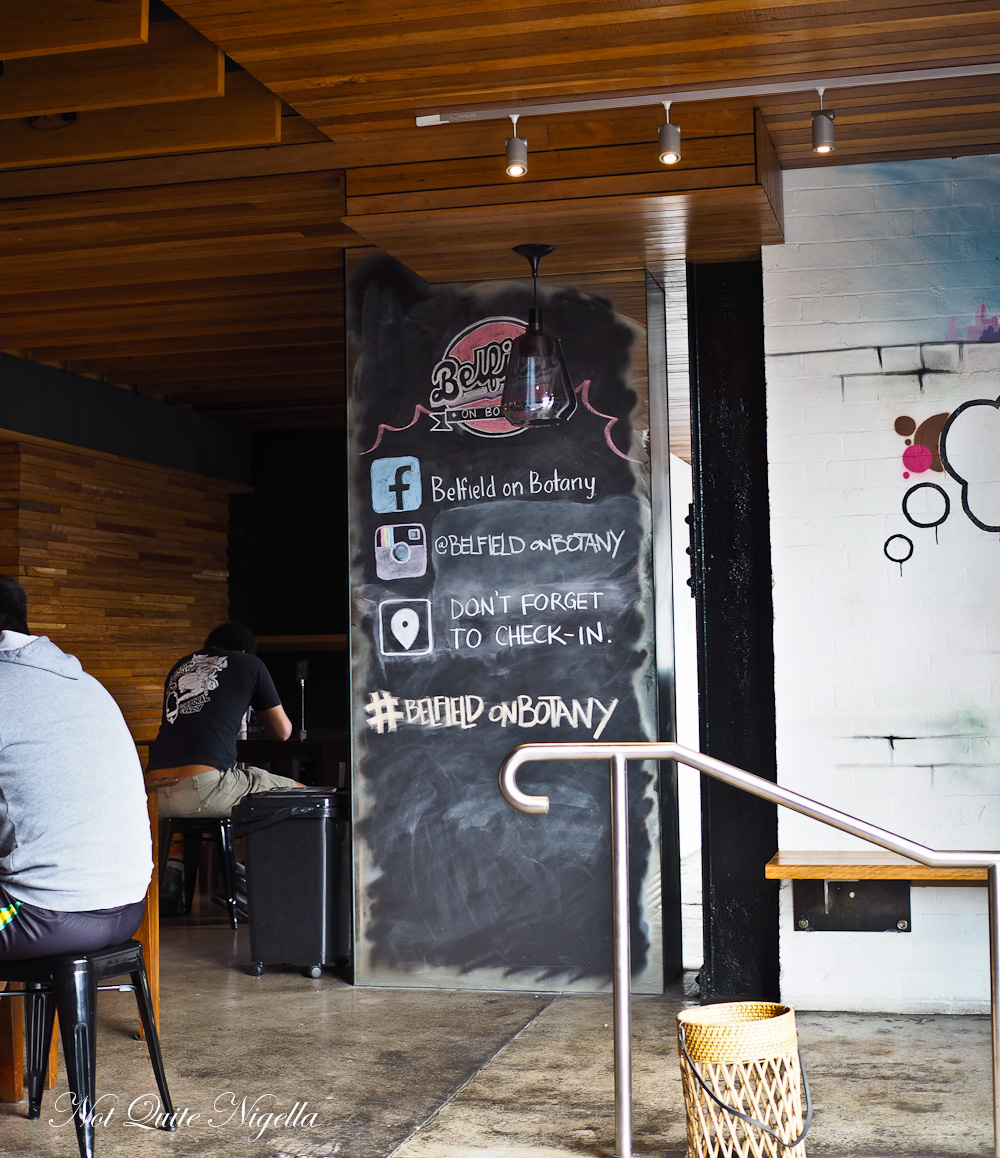 I was meeting up with the two of them over burgers for a Friday lunch. Both of them had days off work and I was only too happy to make the short drive to Rosebery to try out Belfield On Botany. As the name suggests it is located on Botany Road and it's located in a largeish space with graffitied walls and a mostly Asian staff behind the counter blaring hip hop. Asians, burgers and hip-hop - it's a thing ;). And is it okay to take photos? "Sure and thanks for asking although we try and encourage it," they say and sure enough, there is a burger wall much like the cloud wall at Aqua S. 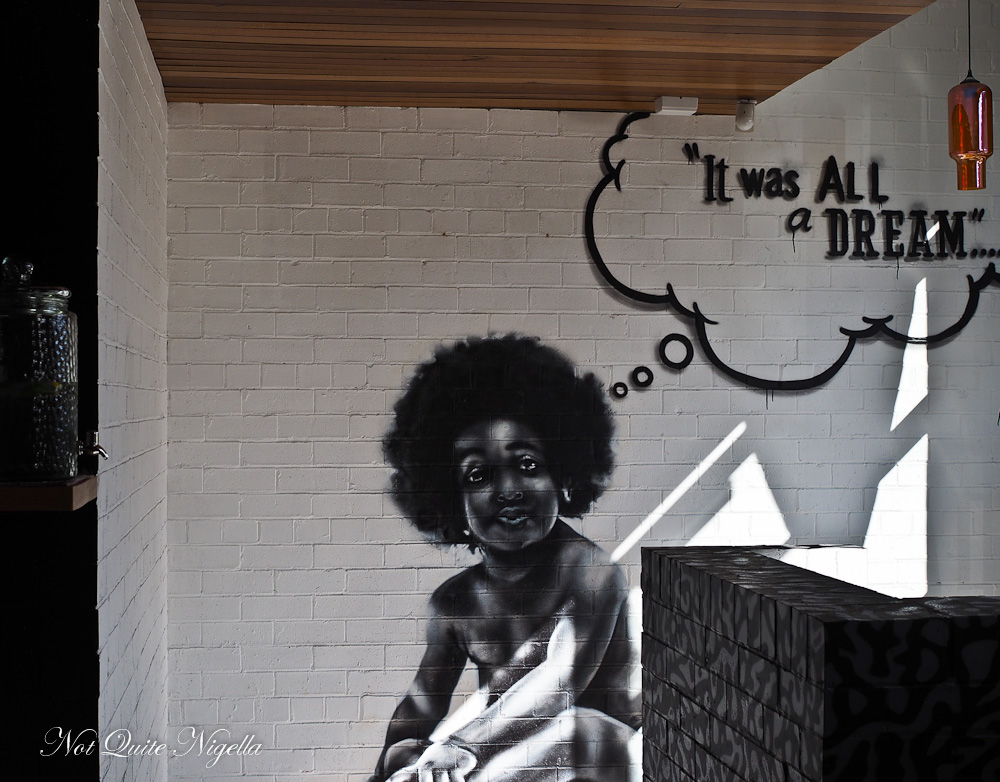 One of the owner Robby Ko says, "The concept of the burger joint originated from a close group of friend who grew up in a suburb called Belfield wanting to bring something new, flavorsome and different to the Sydney scene, not only food related, but environment too. Of the group, there were two who brought hospitality experience to the table, while the other two brought their marketing background. All mutually sharing a love for food and hip-hop" 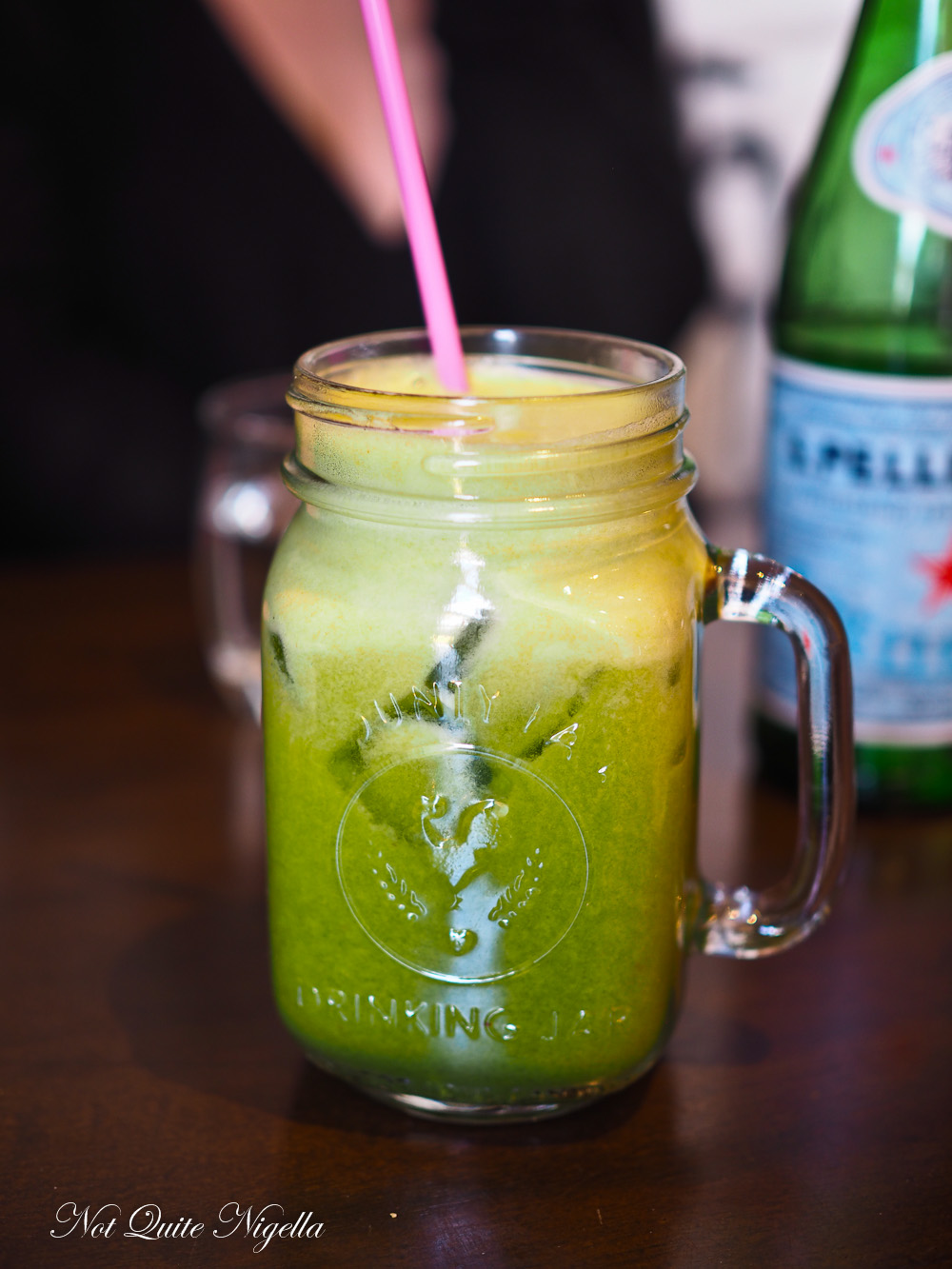 There are burgers, sides and freshly made juices on offer. The burgers have unusual little touches on them - the Belfield burger has Vegemite mayo while the pork burger has a peanut butter pork patty. Of course we have to order these and we do so at the counter and take a number to a table. Service is very friendly and many of the burgers are $8 topping out at $12 for the pork and chicken burgers. 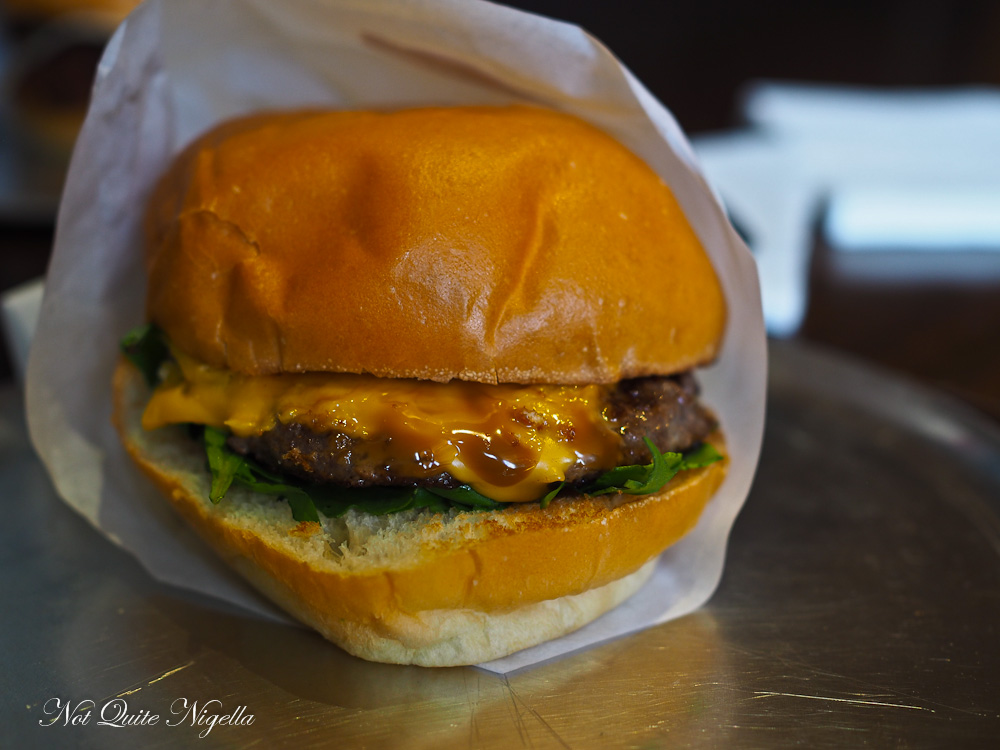 Prices are very good and although the burgers are thinner than some of the super filled burgers making their way around Sydney they don't feel like they are lacking. The Belfield burger is made of a beef patty, cheese, rocket and Vegemite mayo. And what is Vegemite mayo like? It's pretty damn good and adds that alluring umami quality to the burgers. You know that part where you find yourself murmuring "Mmmm" unprompted? And the Vegemite is not out of place at all. 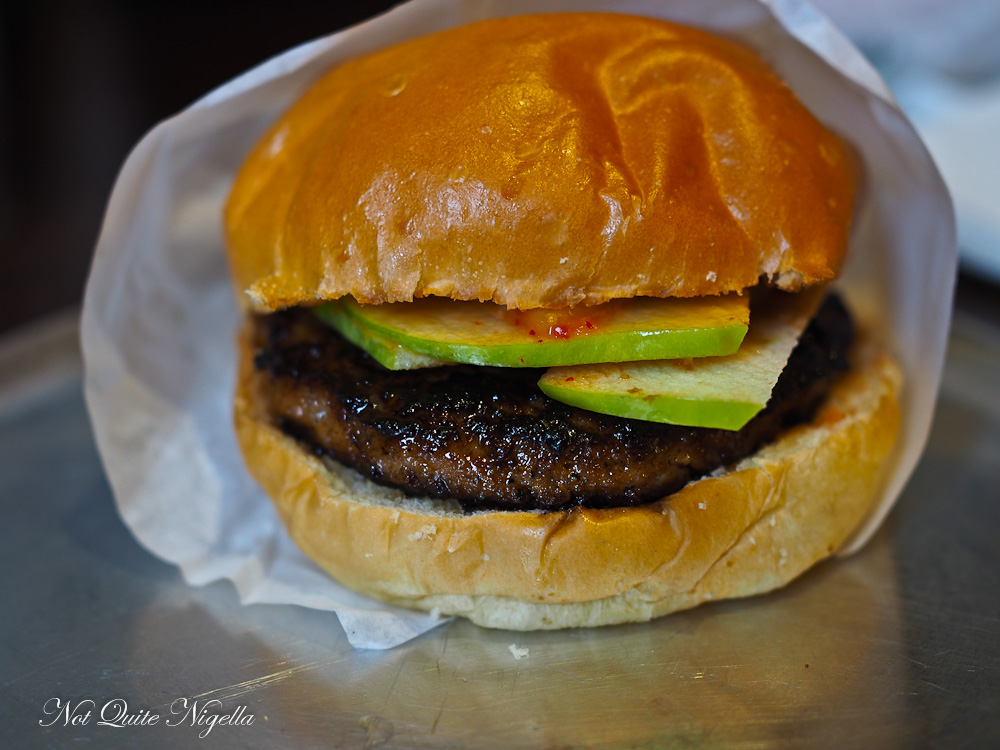 The pork burger has a peanut butter pork patty with kimchi, slices of green apple and a home made mayonnaise. At first I think there might be too much green apple and too little kim chi but the ratios are actually really good. The slightly tart green apple is refreshing against the pork patty (the peanut butter flavour is light) and the kimchi gives it a tiny bit of spice. The buns for all of the burgers are soft and squishy. 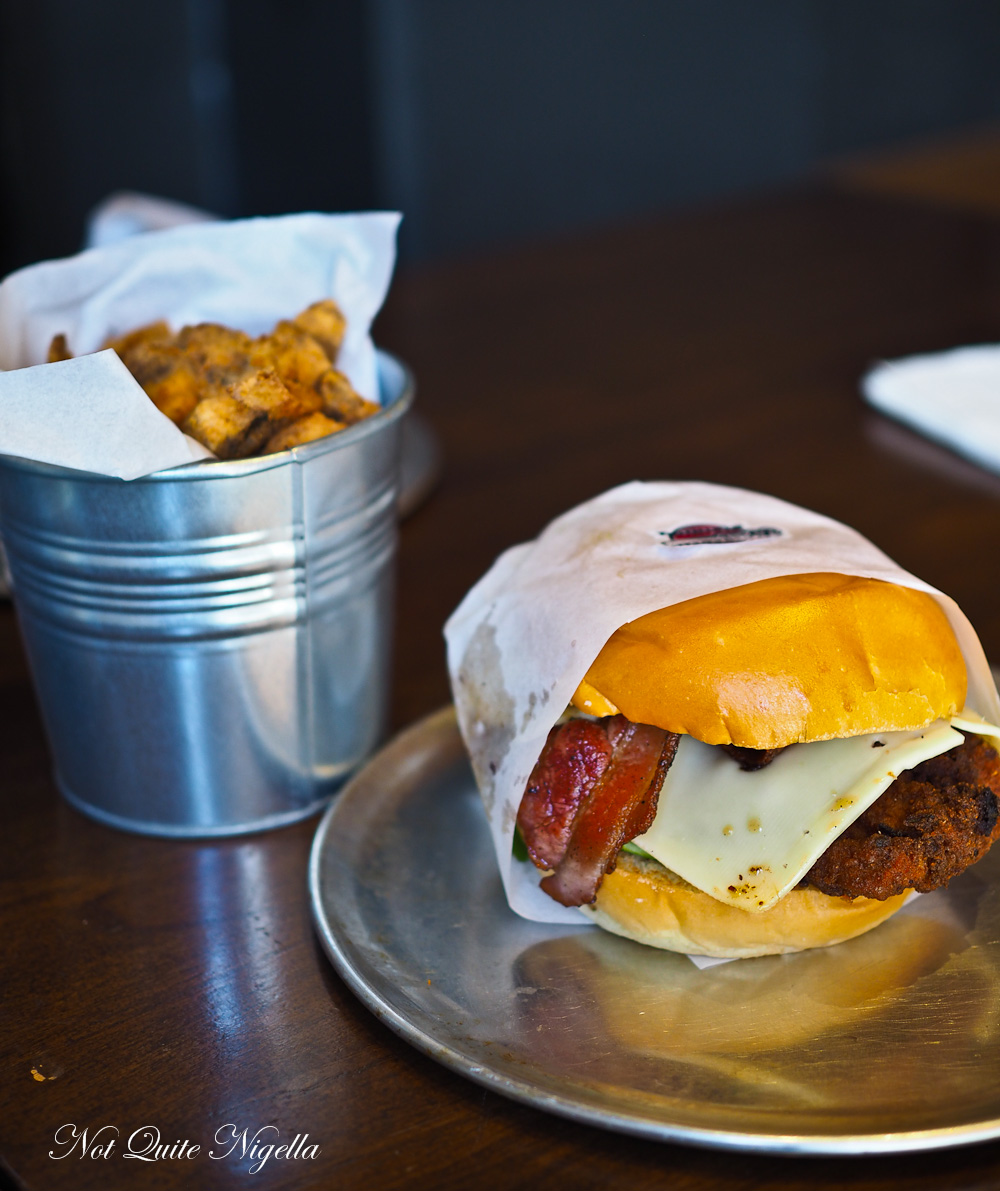 There are also cheese burgers, fish, mushroom , bacon and egg burgers and a sausage and egg burger. We decide to go for the fried chicken burger. The chicken is a little overcooked - it's not dry but the coating is quite dark and strong in bitter garlic. There is also avocado, streaky bacon, cheese, home made aioli and baby rocket. I think this would have been a great burger if the chicken weren't quite as cooked. 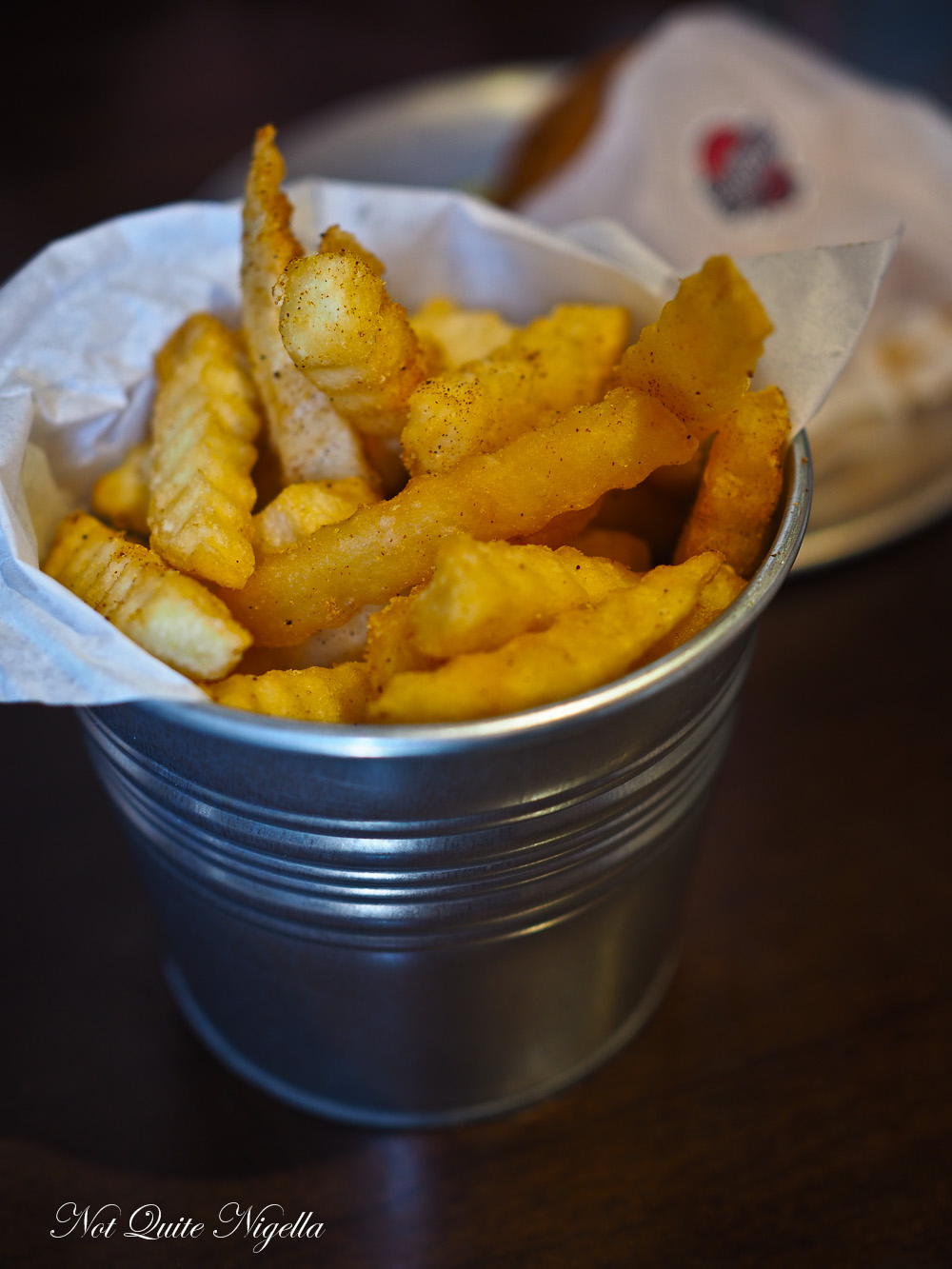 As it reaches 1pm the lines get long - it's a popular spot for Thursday and Friday lunch and the outdoor share tables and the ones inside are full. We pick up the mushrooms and they're quartered and crumbed but not greasy. These and the crinkle cut chips are dusted in a moreish, smokey salt. It's a mixture of chilli salt and a "secret salt" that reminds me of the smokiness of bacon. 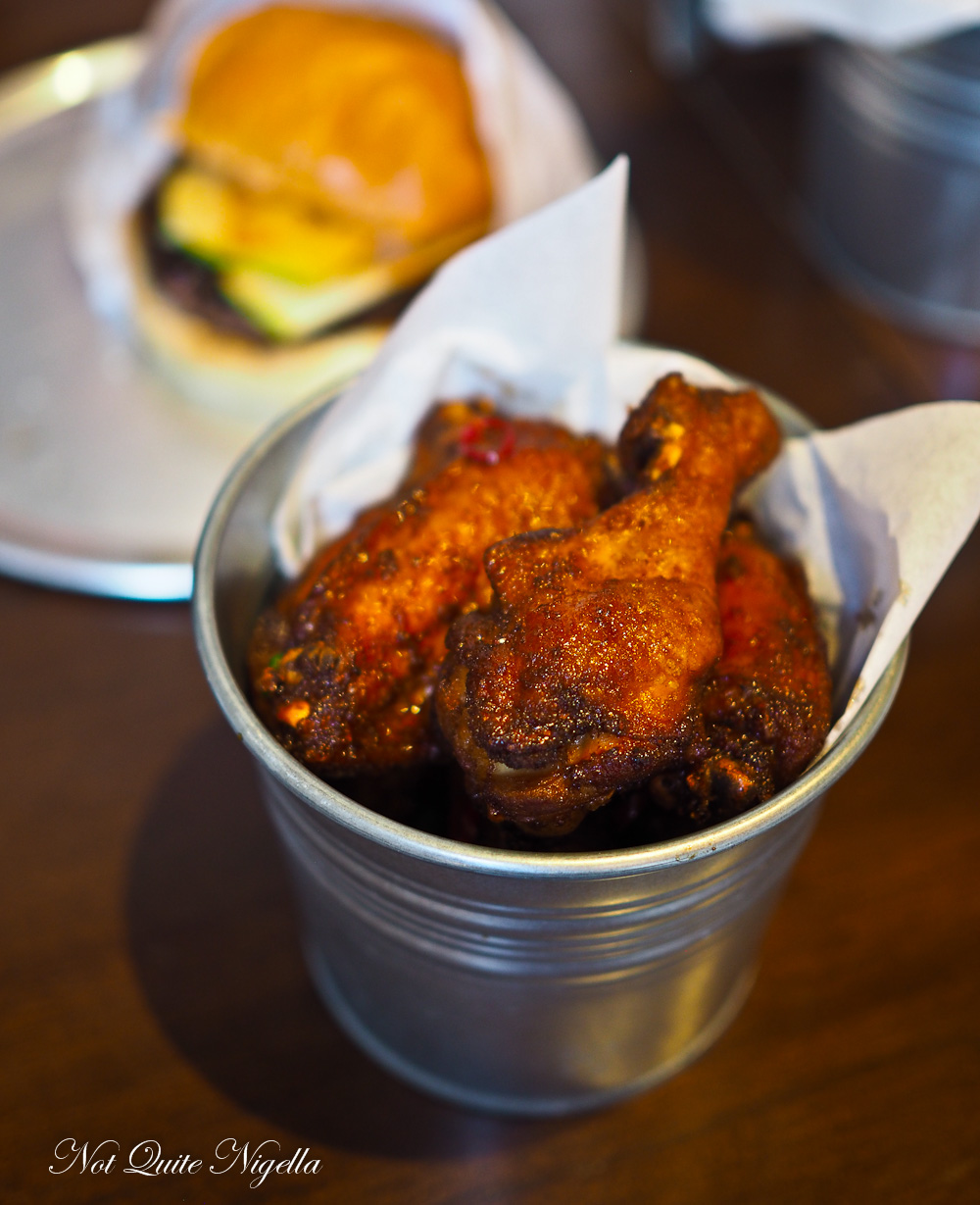 There are three types of chicken wings and we were tossing up between the OG wings or the hot wings but our love of chilli wins out. These spicy wings have a sweetness to them that is quite addictive. Even Belinda who doesn't like meat on the bone likes these while Ringo declares he likes them best of all out of everything.

There's no dessert (an ice cream sandwich or something wouldn't go astray). Or maybe the juices are meant to be dessert. God I hope that isn't a trend! ;) But seriously, we are told that there are plans to add desserts to the menu in the future.

So tell me Dear Reader, do you take pictures of your food for social media or for your own memories? Which burger did you like the sound of the most here?