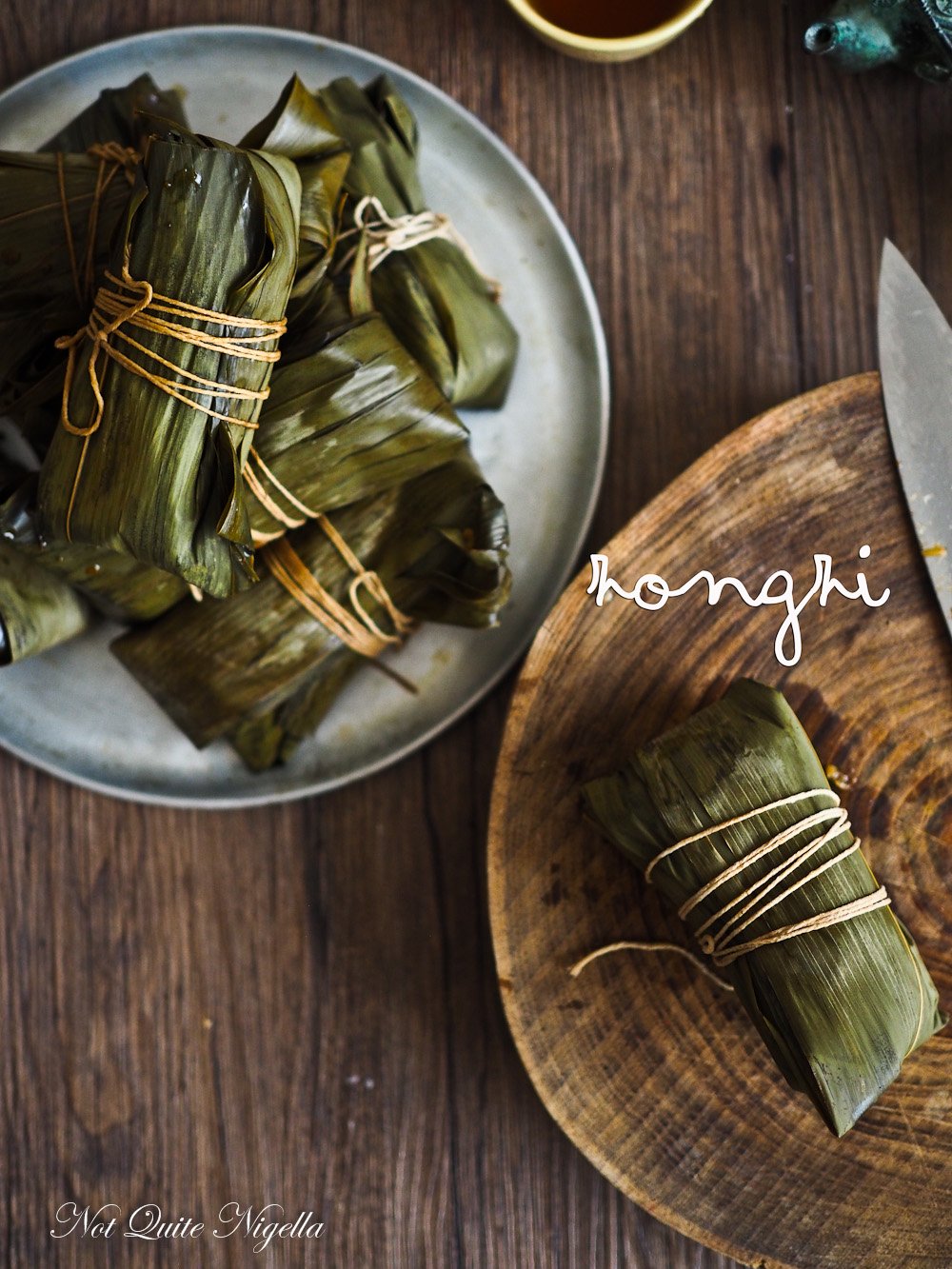 Zongzi are a delicious rice snack that are filled with a soft filling of shiitake mushroom and pork belly. The rice used in a zongzi is a glutinous sticky rice that holds the fillings in perfectly. They are usually served during the dragon boat festival which is celebrated on the fifth day of the fifth moon of the lunar calendar. This year it was June 20th and next year it will be June 9th, 2016. My grandmother made these for me every day after school for years but when she passed away, nobody learned how to roll these and the method was lost. Until one day!

You may have seen modified versions of the glutinous rice dumplings stuffed with pork at yum cha perhaps wrapped in lotus leaves and them steamed. The zongzi that I had after school were elaborately wrapped in bamboo leaves and strung up in the laundry with red and white twine once boiled. They were tummy fillers and stopped any post school hunger pangs before dinner.

The significance of zongzi is tied up in the legend of Chu Yuan, a scholar and poet during the time of 277 B.C. Despite being good and well respected, through the actions of jealous rivals Chu Yuan no longer held an esteemed position in the emperor's court and as a result, he threw himself into the river. The local people that lived alongside the river quickly rushed to their boats and threw rice into the river to appease the river dragons. After this bamboo leaves filled with cooked rice was thrown into the water so the fish can eat the rice instead of the poet. Now it has evolved into the custom of eating rice dumplings. 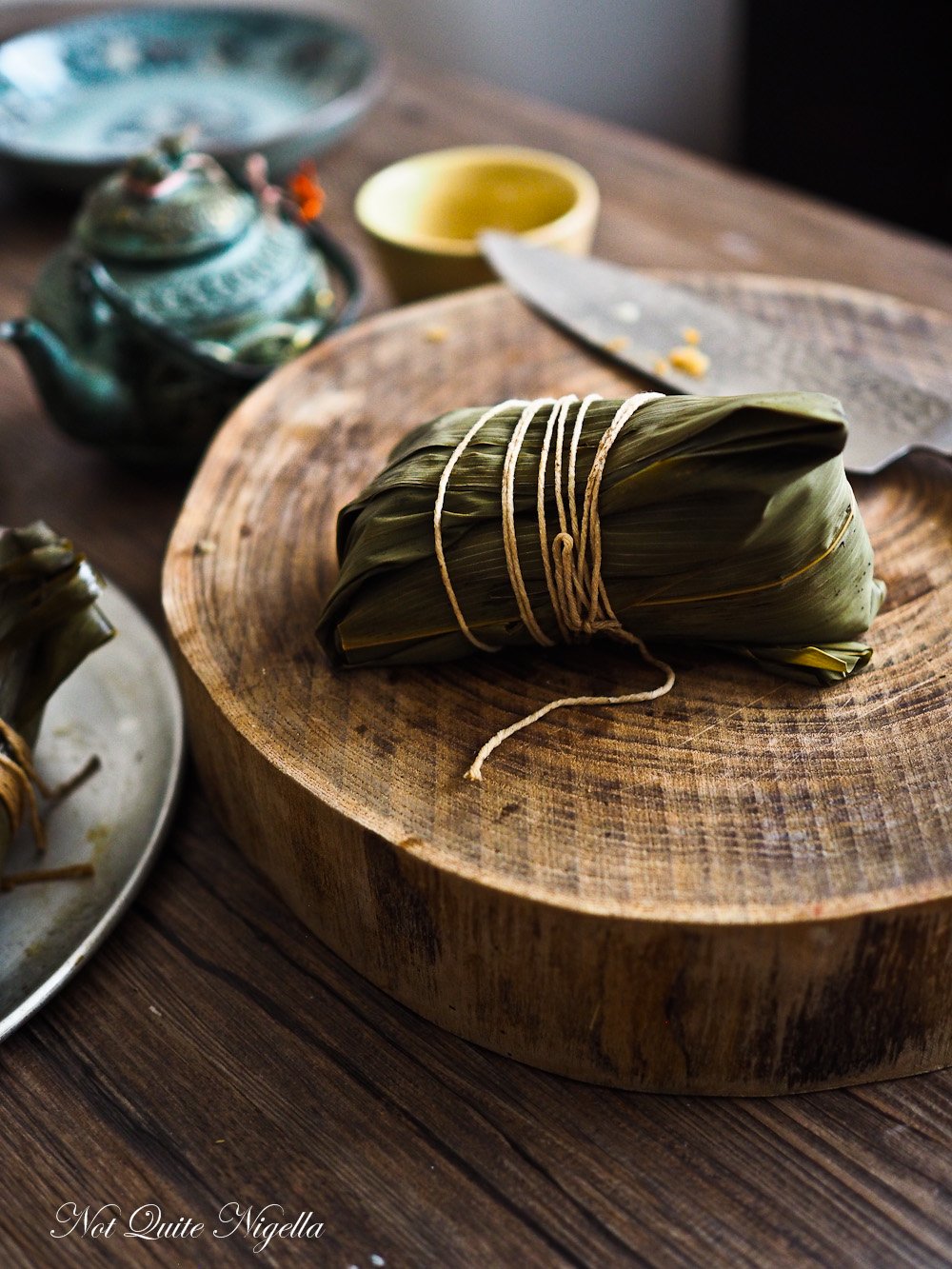 For a large part of when we were growing up, one of my grandmothers would live with us alternating with the rest of my parents' siblings. The first to come live with us was my mother's mother. She was rather terrifying although she had a very soft side to her. The difficulty came mostly in the fact that we couldn't understand her and when she said things she delivered them in a really loud manner so she always sounded as though she were annoyed at you or that you had done something wrong.

We called her Mama and she looked after me when I was a baby and as a result she did tend to favour me whereas my father's mother looked after my sister. Mama would give me the best pieces of any dish - there was a funny routine where my mother and father would give her the best pieces and then she would take her chopsticks and pass them into my bowl. Like I said, she had a very nice side to her but she had a very strong side to her that may have perhaps been made stronger as she was made a widow by the second world war and had to raise six children on her own. 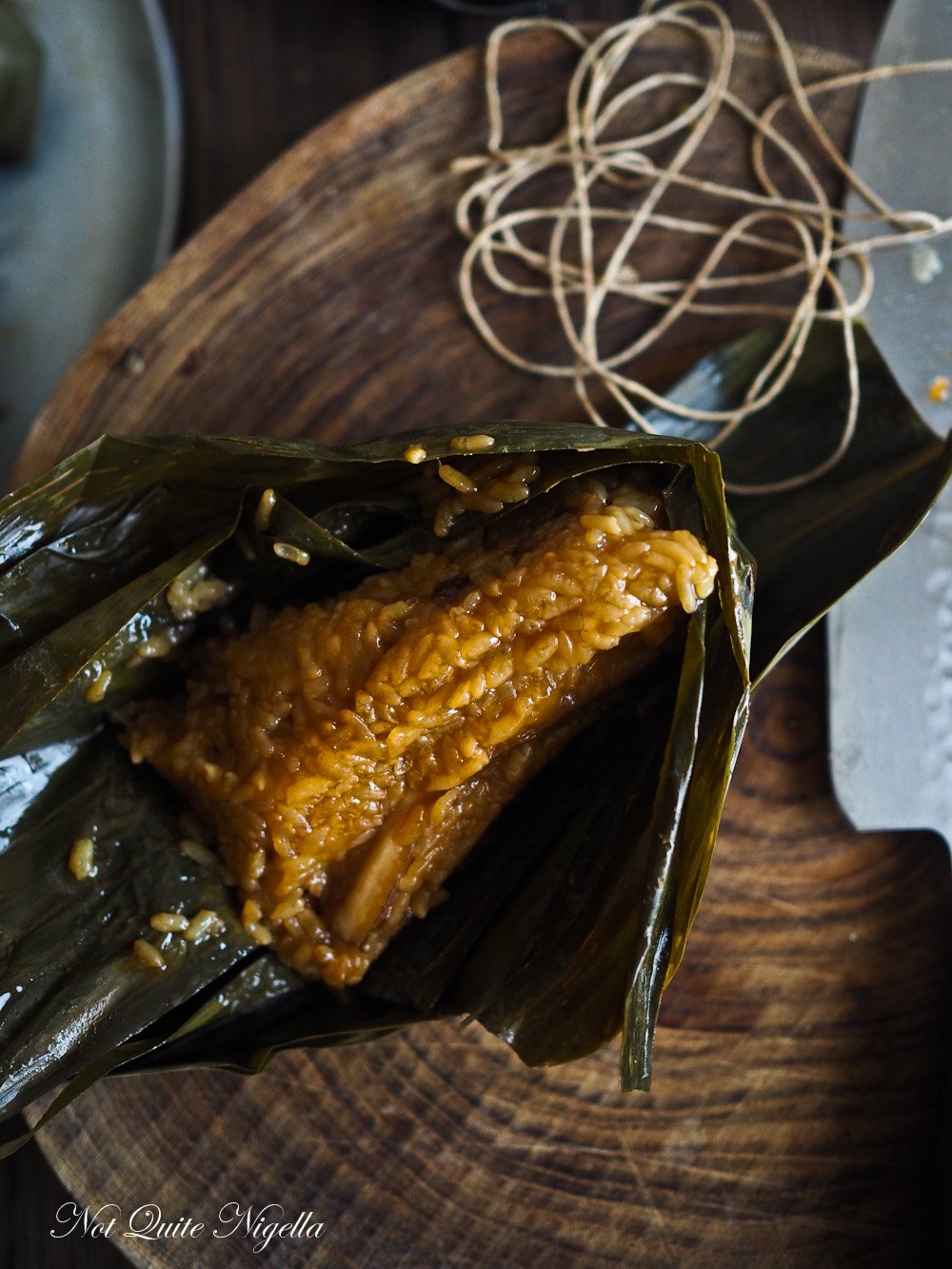 One time I didn't eat my boiled egg and tomato sauce (it's a thing in Asia!) for breakfast and I found what I hadn't eaten in my zongzi that afternoon and it was a lesson learned. I always finished my breakfast because egg and tomato sauce zongzi is unappetising at best. We always took these ever present zongzi for granted as if they would always be there, but when my grandmother passed away she died without passing on the elaborate folding technique onto my mother. So it was up to me to find out how to make them myself.

Thanks to the owner and chefs at Taste of Shanghai restaurant in World Square who showed me how to make these and passed on their recipe to me too which was very nice of them. They tasted just like Mama's zongzi and between the owner Aaron Mi and the two chefs Li Ming Yue and Li Ding Mei they showed me the way to roll them. I wouldn't say that I was a pro at it but by the time I made my own batch at home and recreated it, they were decent, if not perfect :)

What I learned is how simple the filling is but it also takes a long time to make these. It starts with marinating pork, soaking and boiling bamboo leaves and soaking glutinous rice. The filling is really just a matter of seasoning the rice and pork. Then comes the wrapping and the boiling, the final step taking 5 hours. Yep five hours to boil so a total of 8 hours or so (albeit much of it is inattention).

But it's worth it when you can taste your grandmother's cooking all over again.

So tell me Dear Reader, if there was one dish that you could eat again what would it be? What is the dish that takes the longest to make in your repertoire? 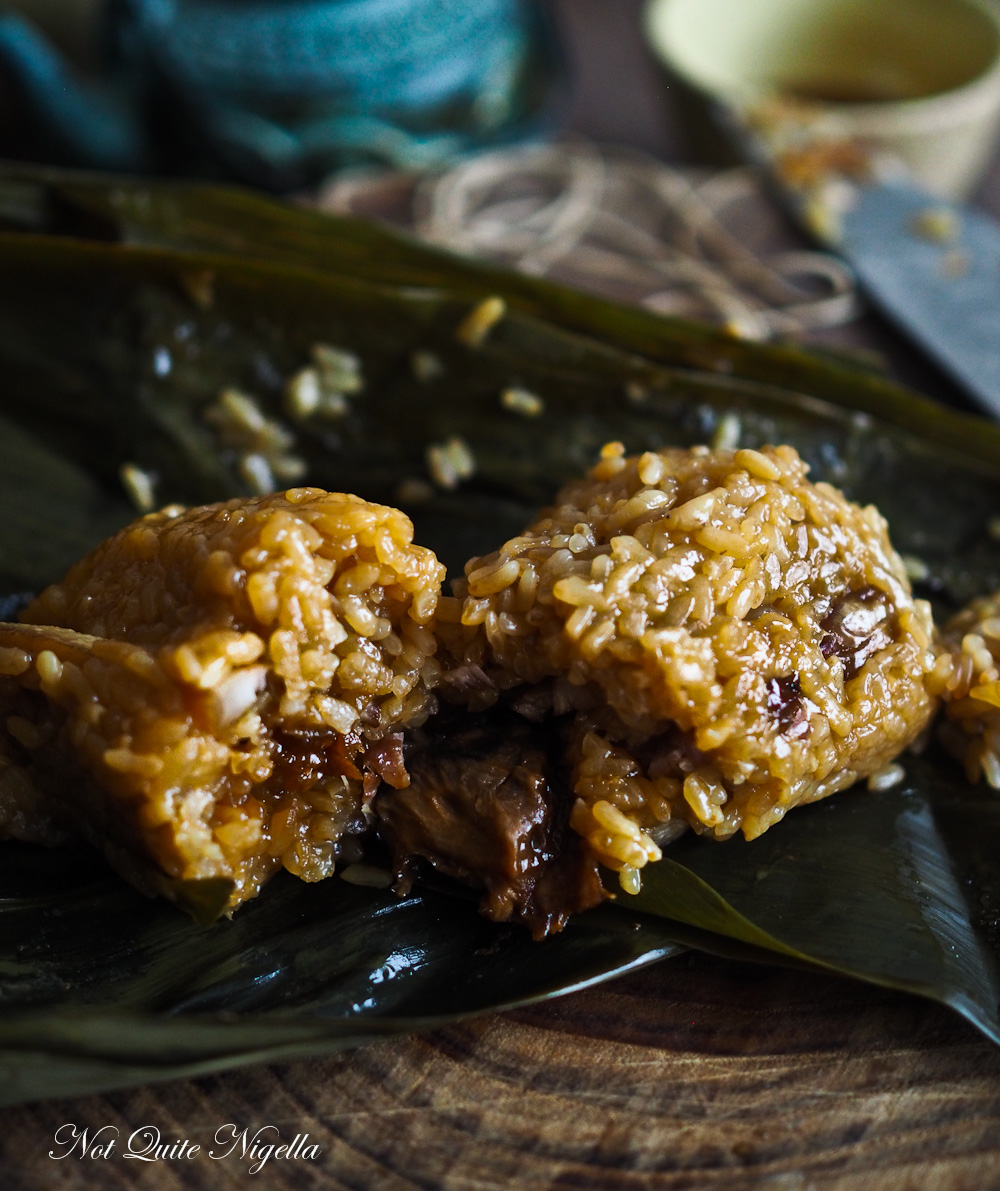 Adapted from a recipe by Taste of Shanghai

Ingredients for marinating the glutinous rice:

Ingredients for marinating the Pork Belly: 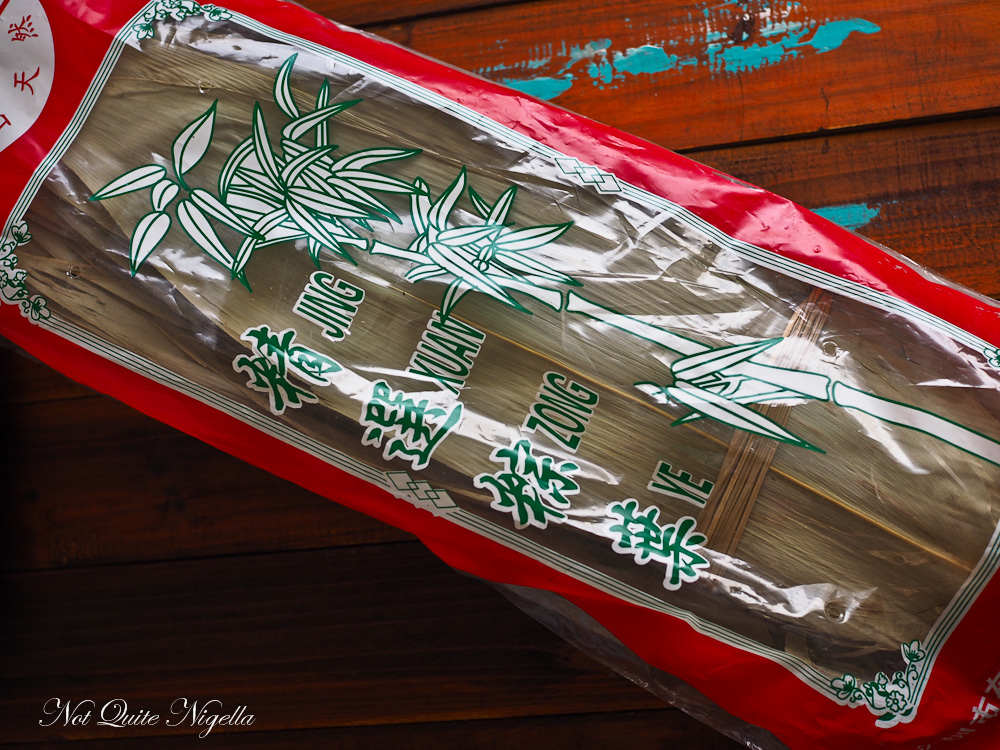 *Bamboo leaves are found at large Asian grocery stores. They come in a large packet with about 150-200 in there (I didn't count them but I feel like I have a lifetime supply).

*Glutinous rice is white rice sometimes called "sweet rice". I bought a brand called Hakubai only because it was the exact weight that I needed.

To prepare the ingredients: 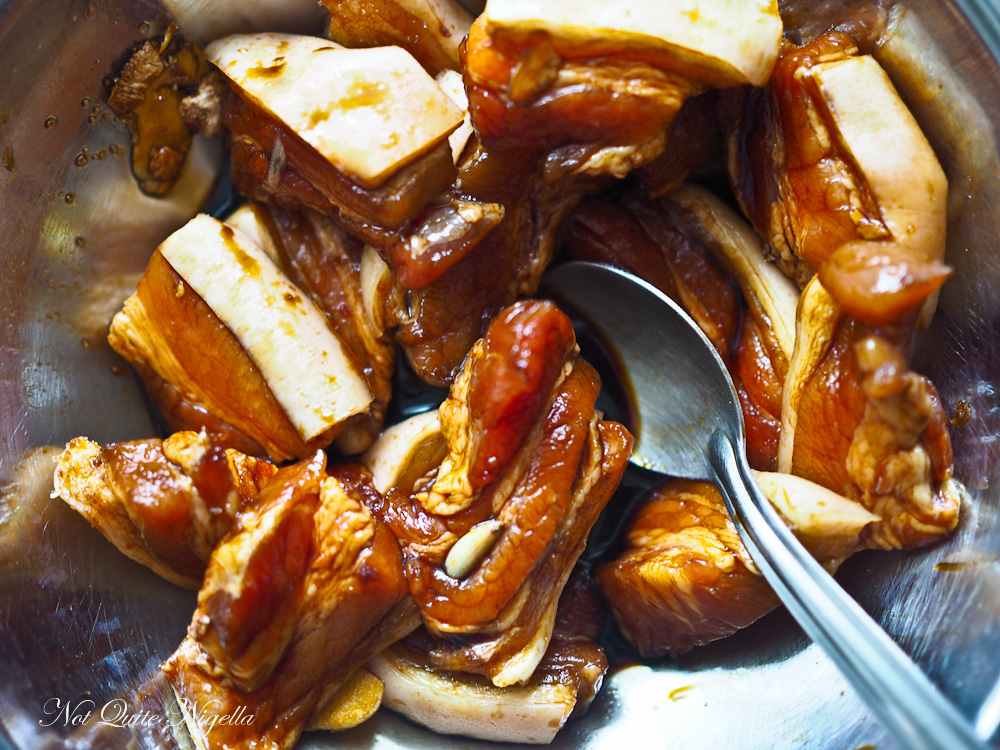 Step 2 - Count the leaves and discard any that have long slits in them. Soak the leaves for 45 minutes. I put them in the sink and filled it up with very hot water from the tap. Drain and then cook them in lots in boiling water for 3 minutes to tenderise, then drain and rinse in cold water. Trim off the woody stems from the tops of the leaves. 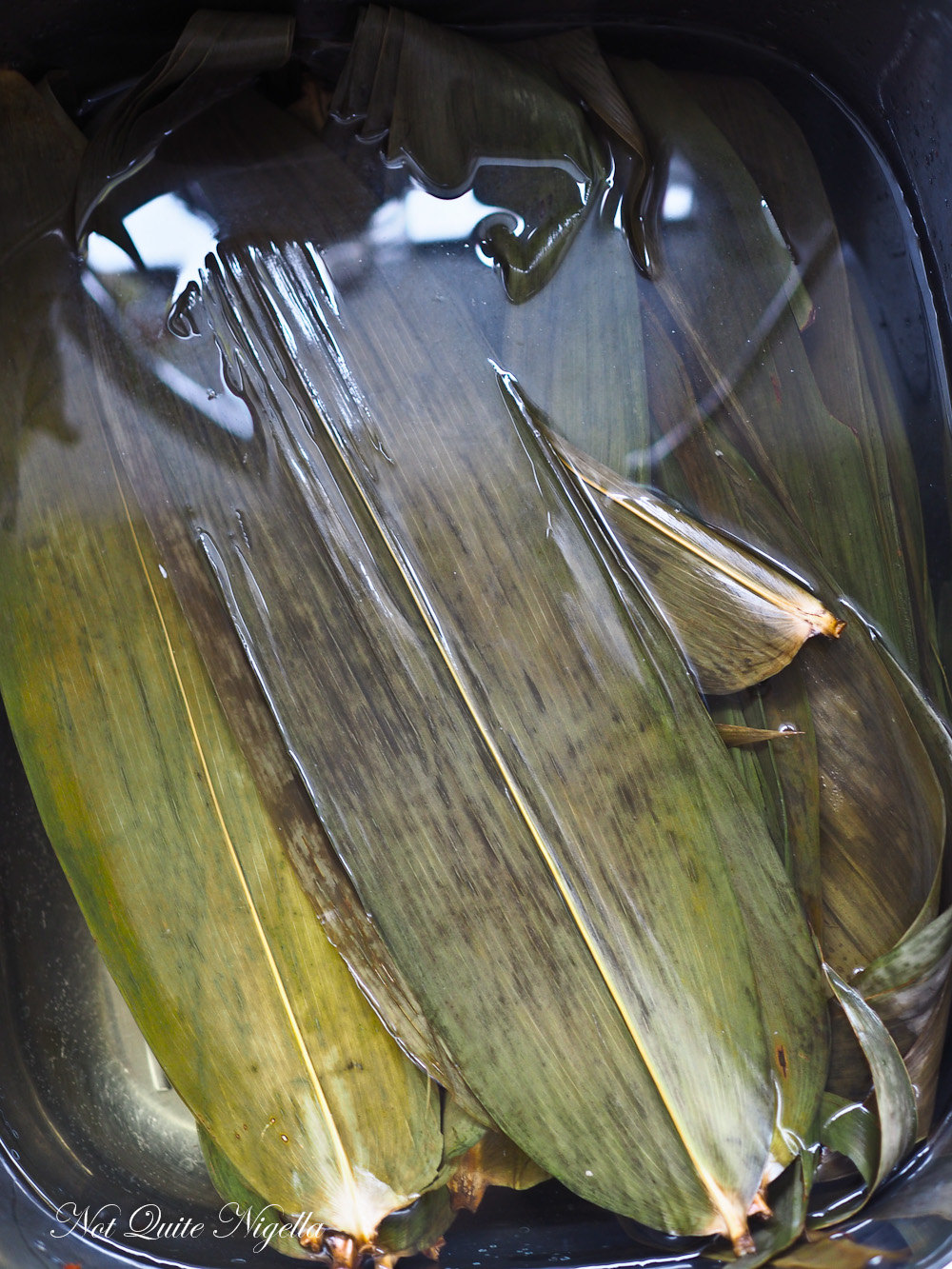 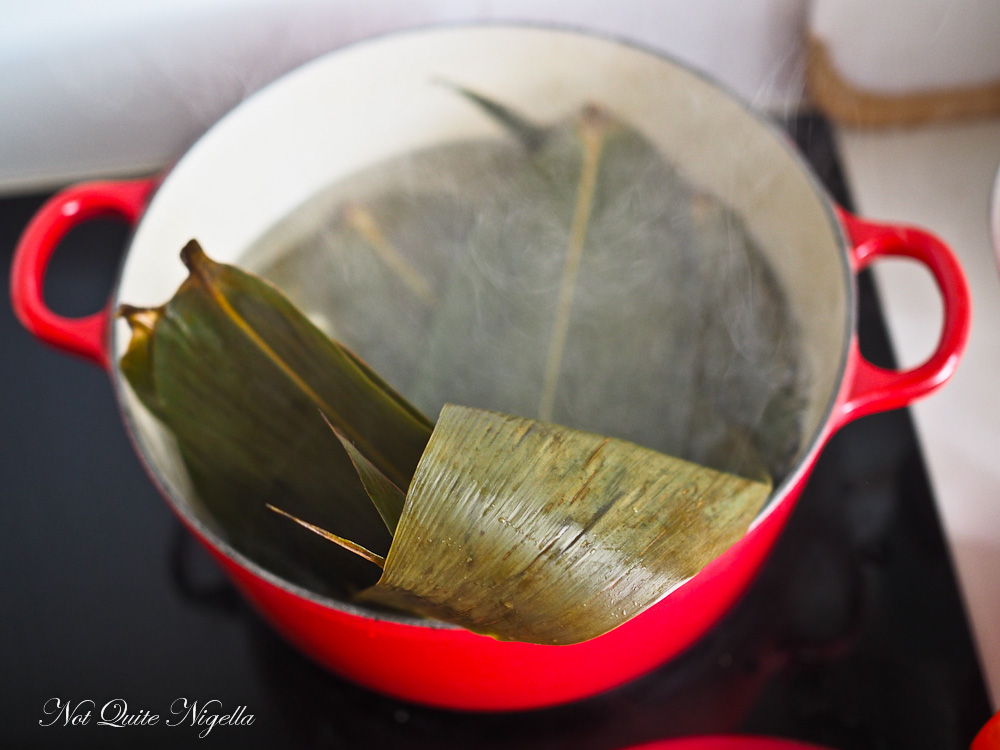 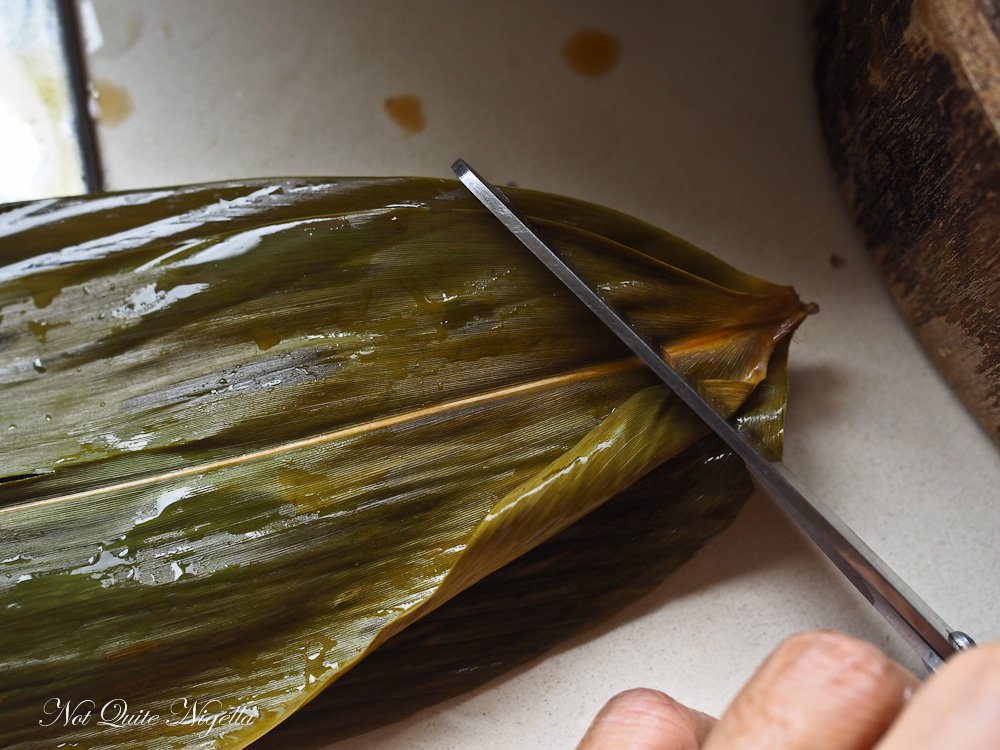 Step 3 - Pour boiling water over the shiitake mushrooms to redhydrate them and steep for 10 minutes. Then remove the stalk and then quarter the mushroom. Cut the pork belly into pieces, marinate along with the mushrooms in the marinade for 45 minutes. 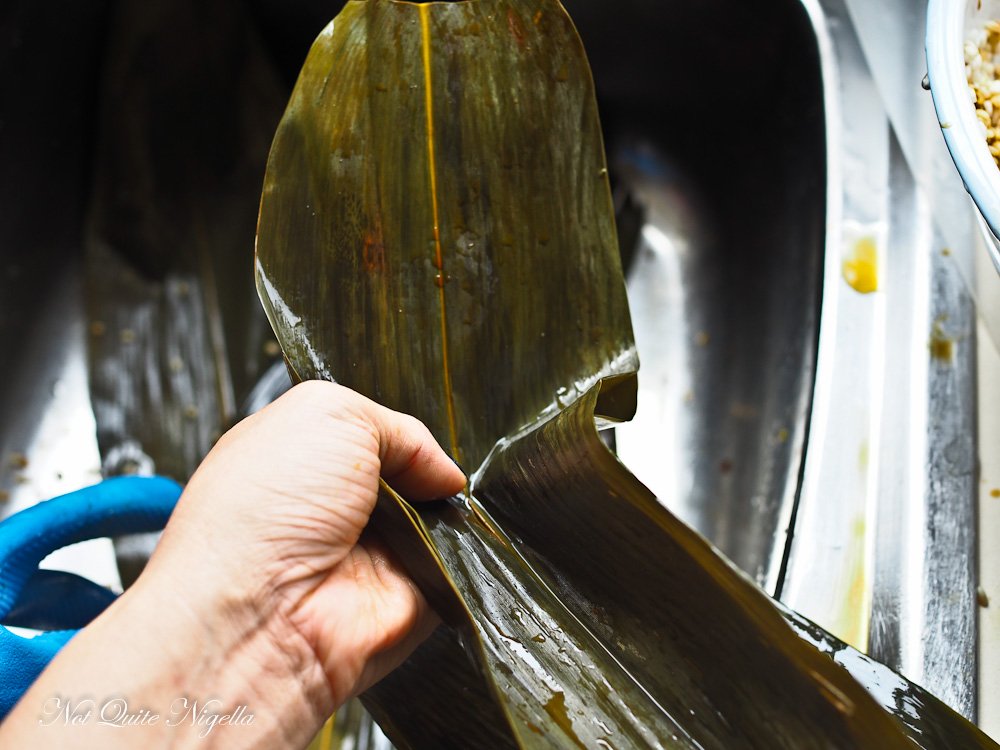 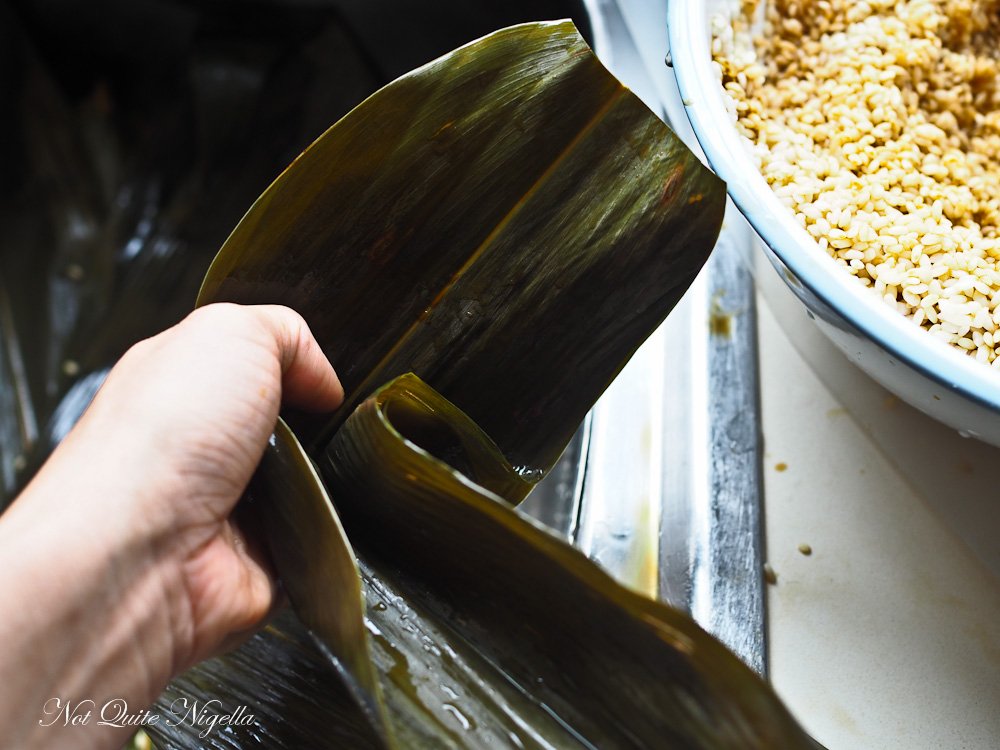 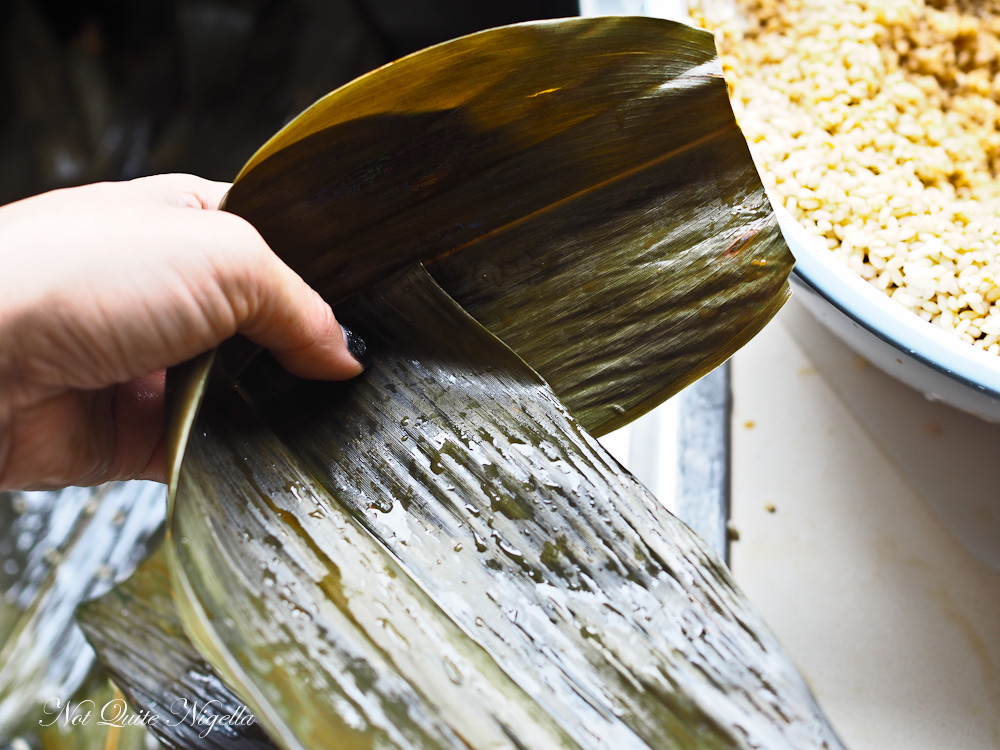 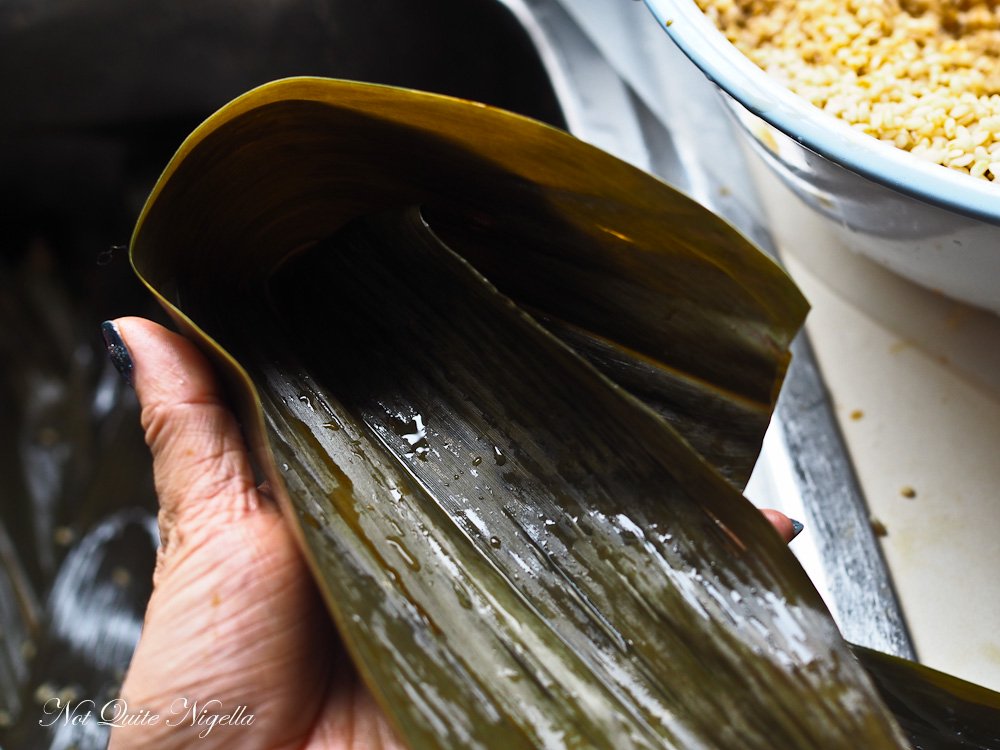 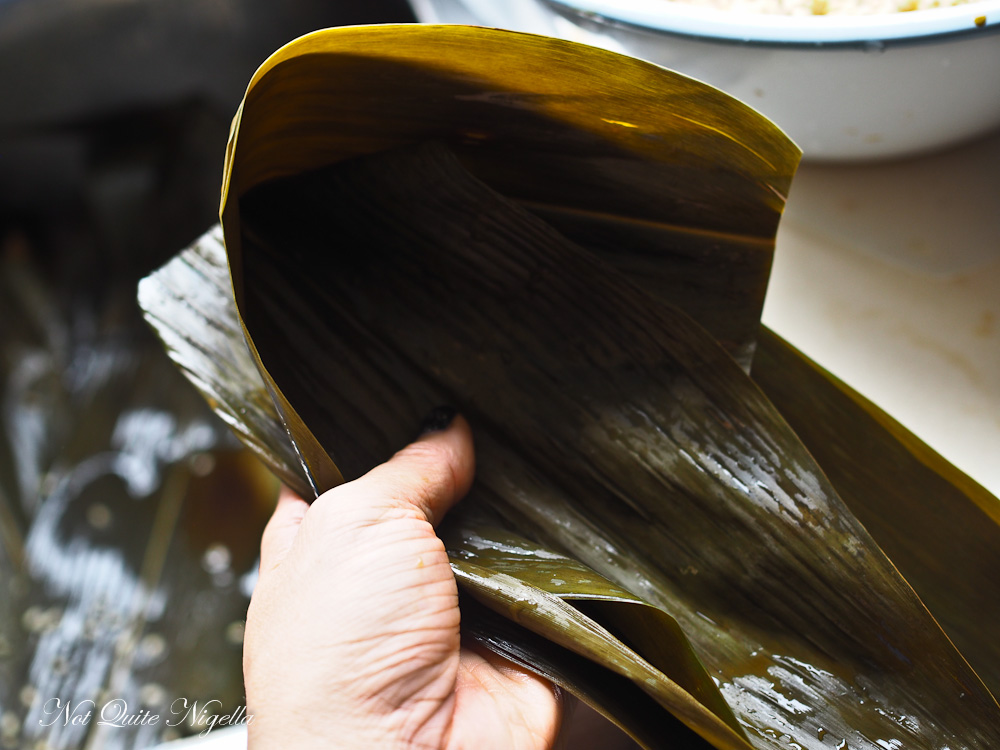 Place the cone on top of two more leaves

Step 4 - You will need four leaves per dumpling and some string to tie it up. Take 2 of the largest leaves and place them on top of each other. Then take two more leaves and create a little cone by folding the right hand side over. Place 2 tablespoons of rice in there and then two pieces of pork and a quarter of mushroom. Add another tablespoon of rice and then shape into a long shape. Fold over the bottom two leaves and wrap up. This is much easier shown on the video. 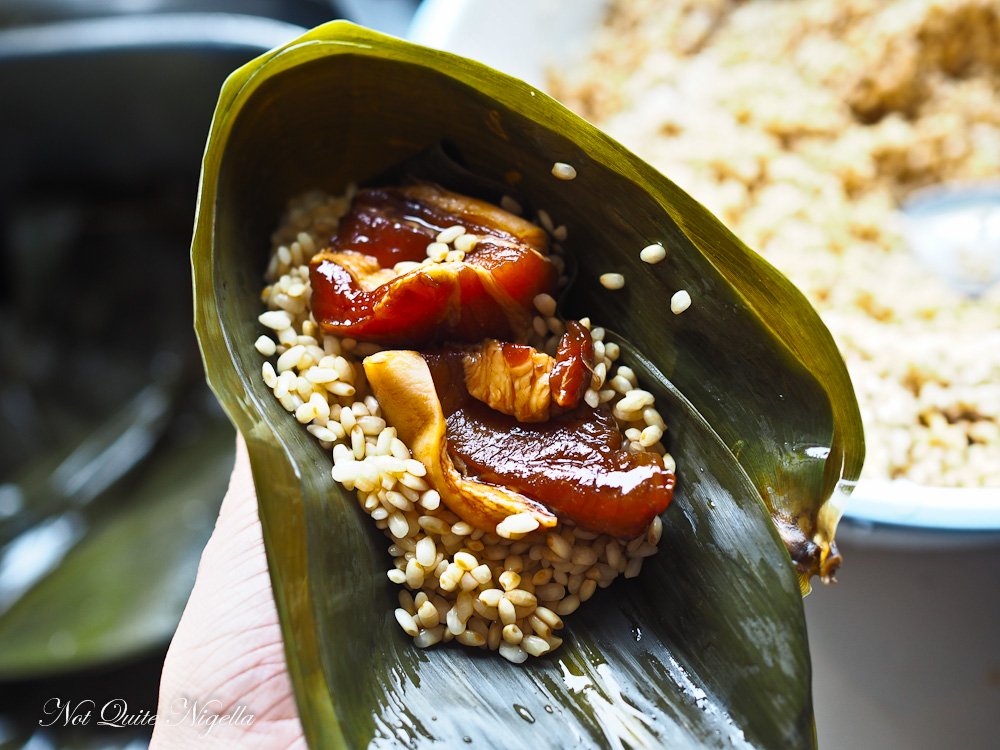 Half fill with seasoned rice and pork 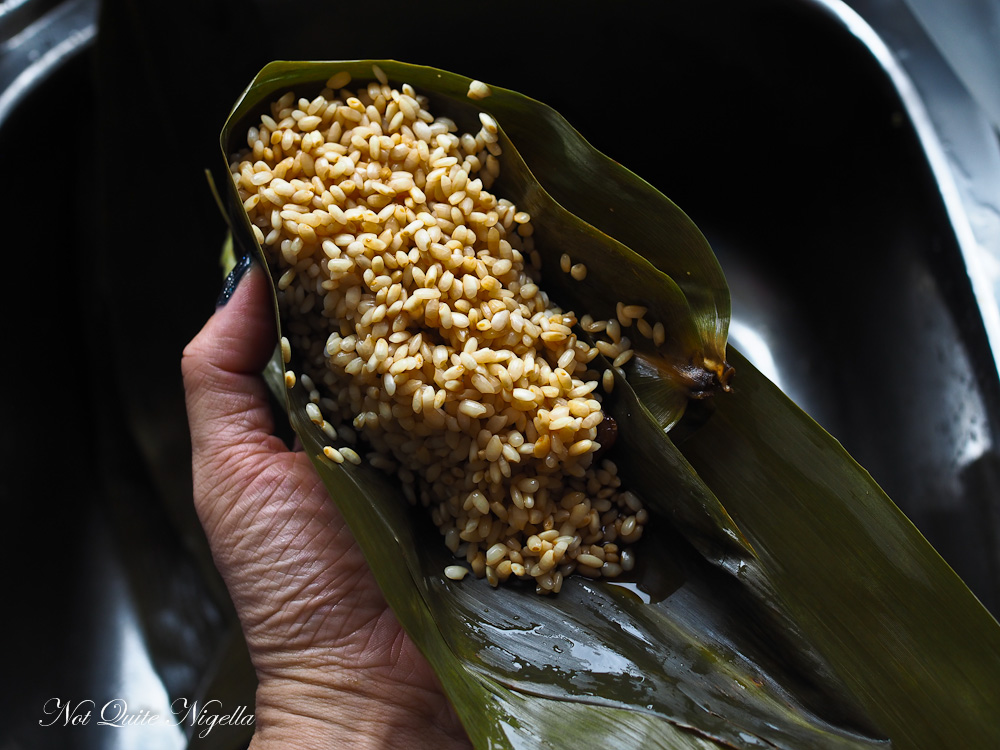 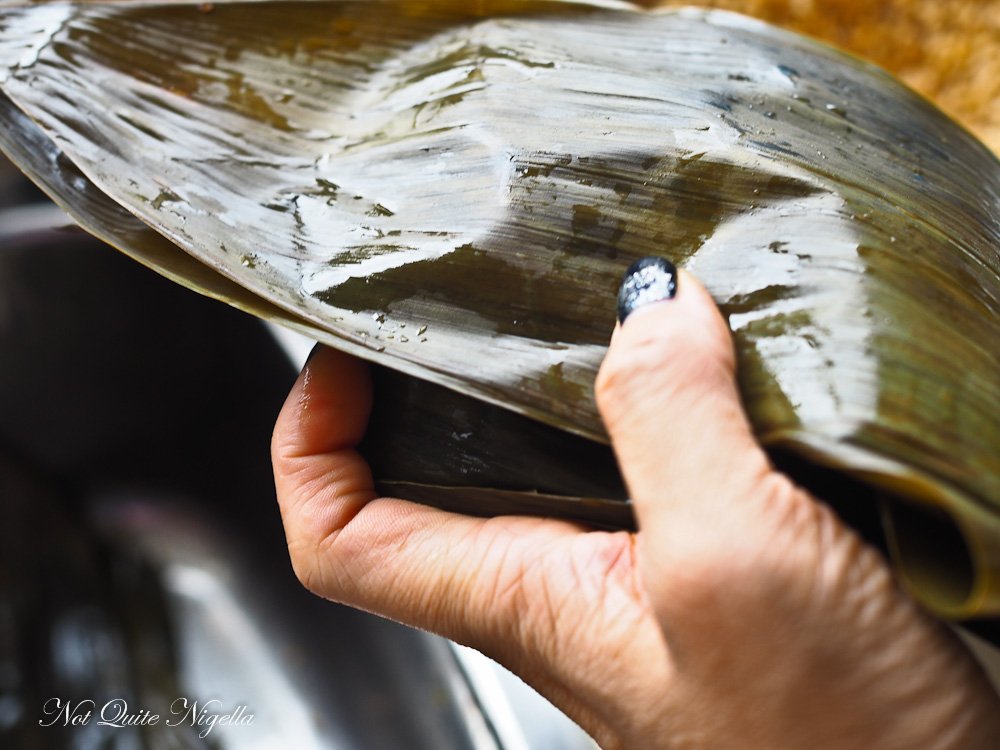 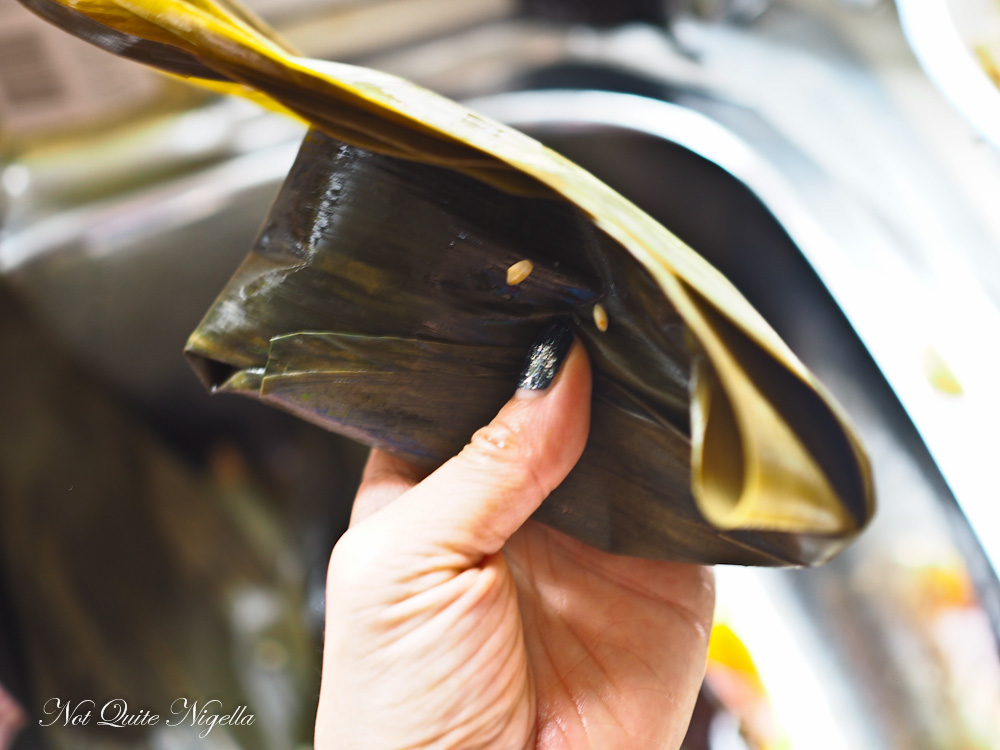 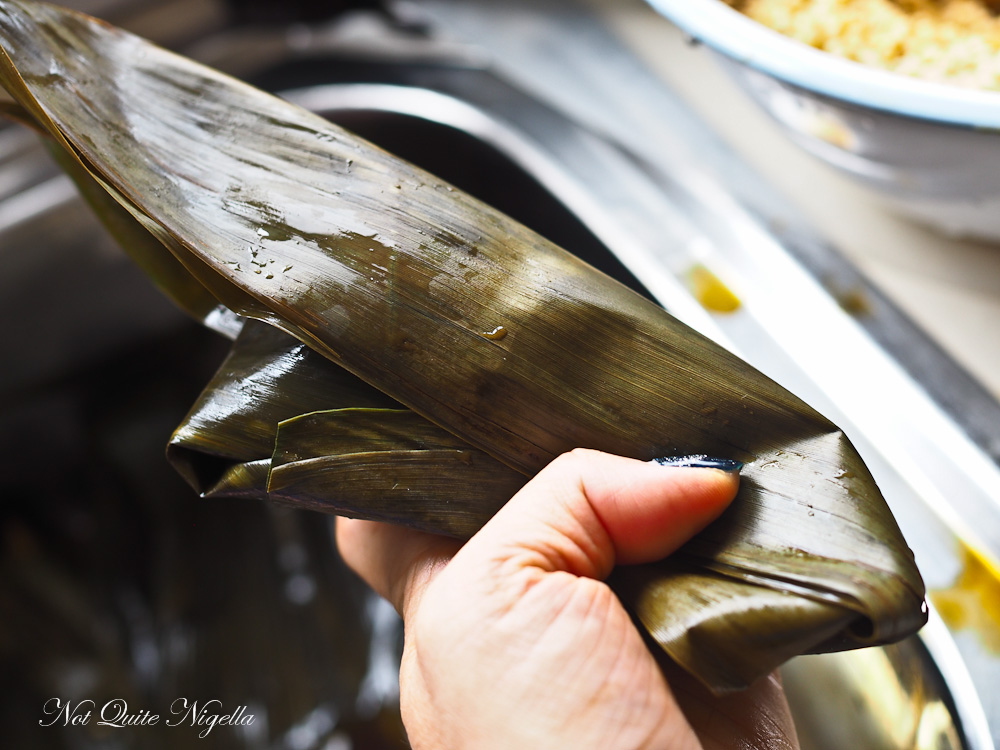 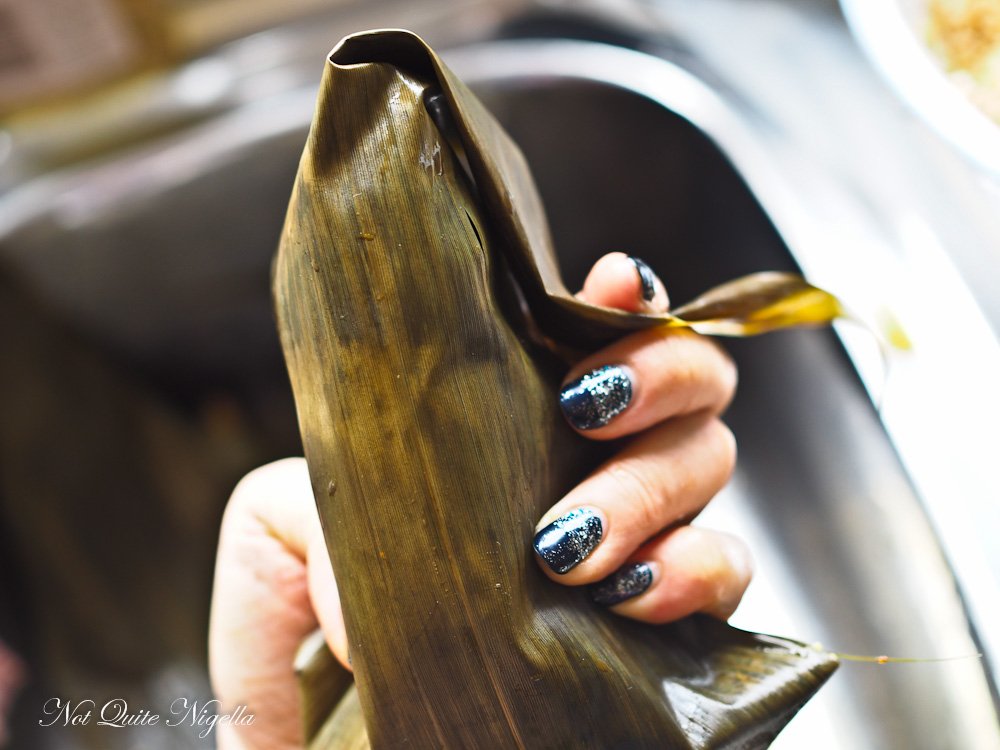 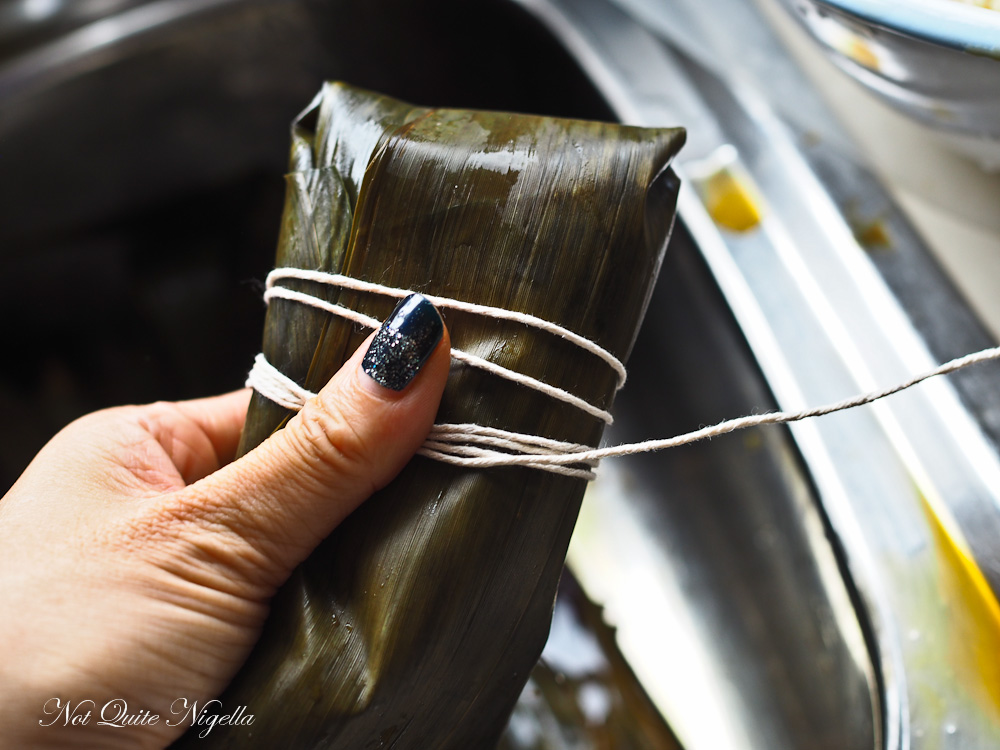 Step 5- Tie with string to secure. Don't worry, your first few will be a bit wonky but they will get better with practice. I made these deliberately smaller so that they would be easier to fold over. When you get more expert at it, you can make them larger. Repeat until all of the rice and pork is used. 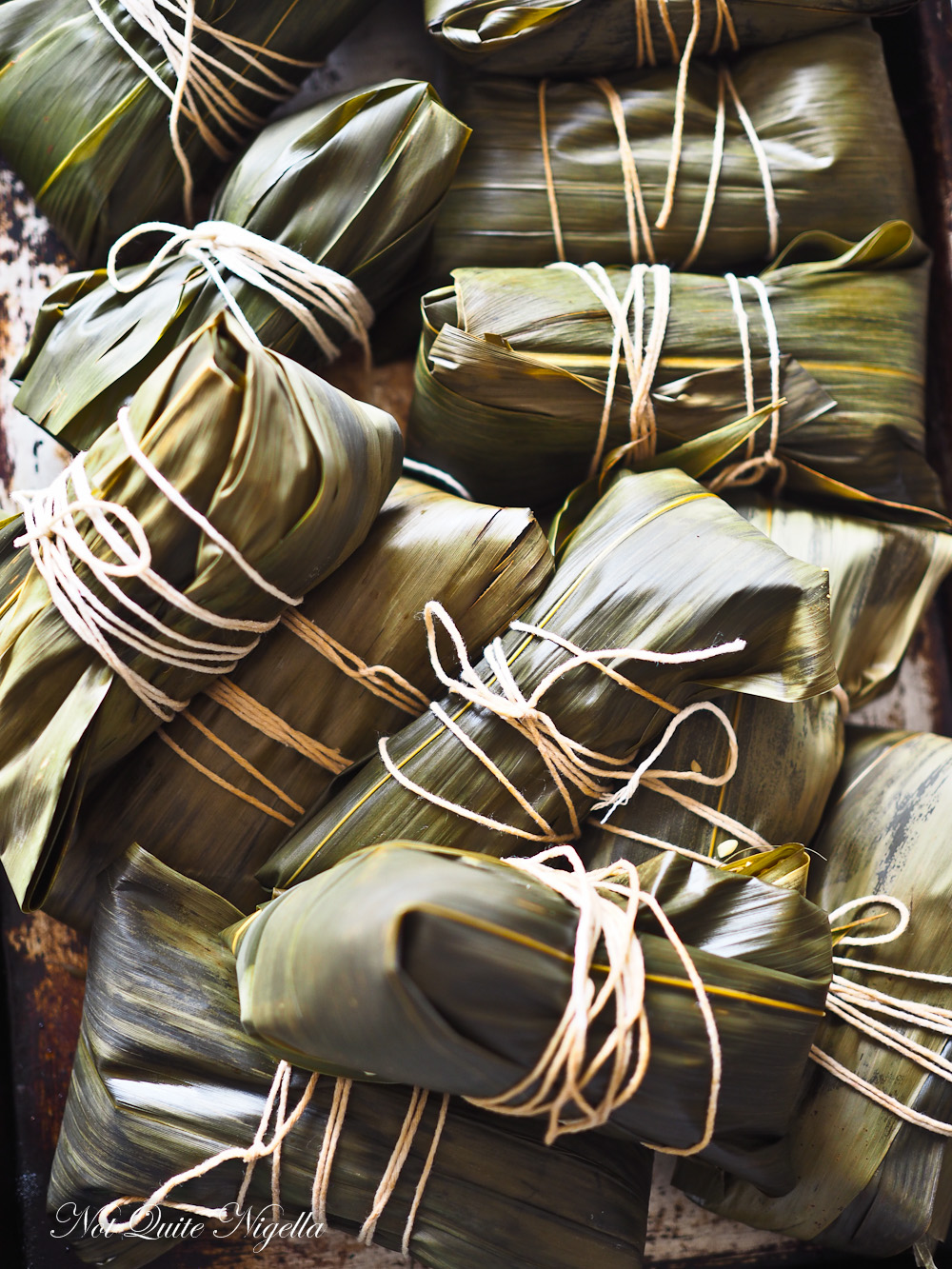 Ready to be steamed

Step 6 - Place into a pressure cooker (mine juuust fit under the maximum indicator but do check). Cover with boiling water and cook on medium pressure for 1 hour. This can also be done on the stovetop in which case you will boil them for 4 hours (making sure to replenish the water if it dries out). 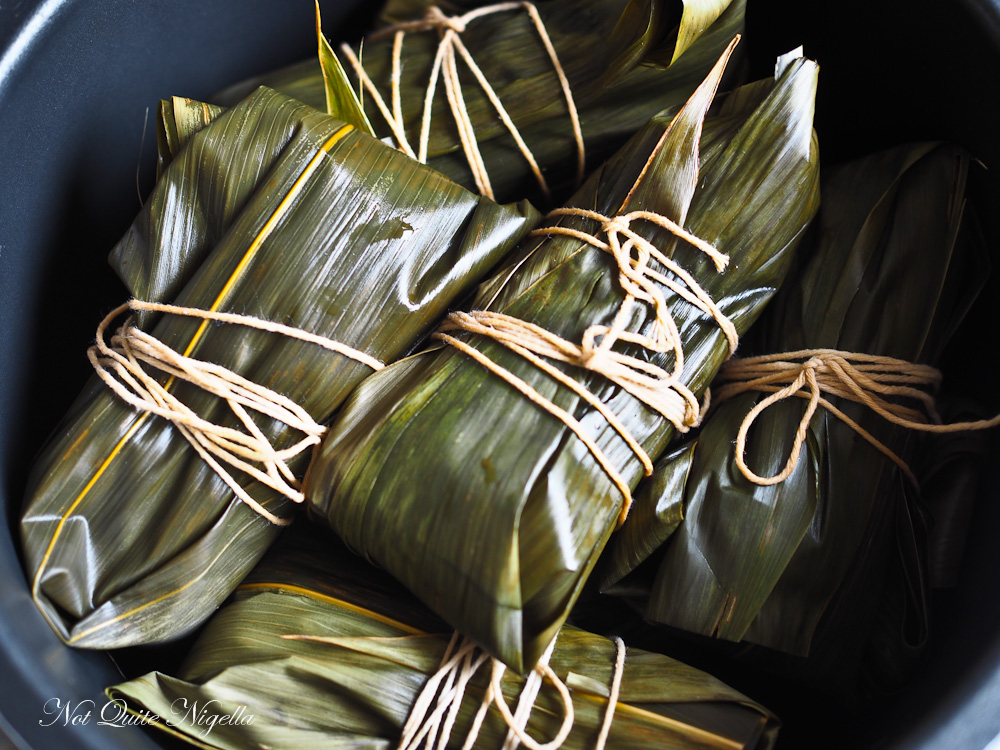