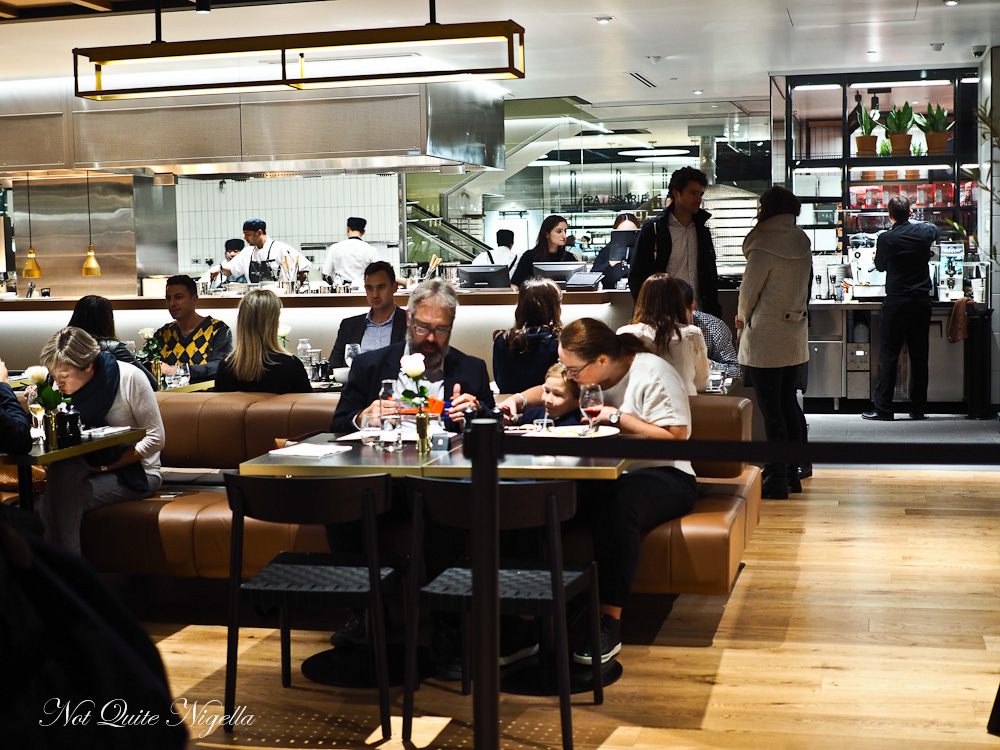 Ever wondered how they design a food store or supermarket? Take a look at the brand new David Jones Bondi Junction food hall where science meets food and where things like lighting, layout and textures can change a customer's experience. 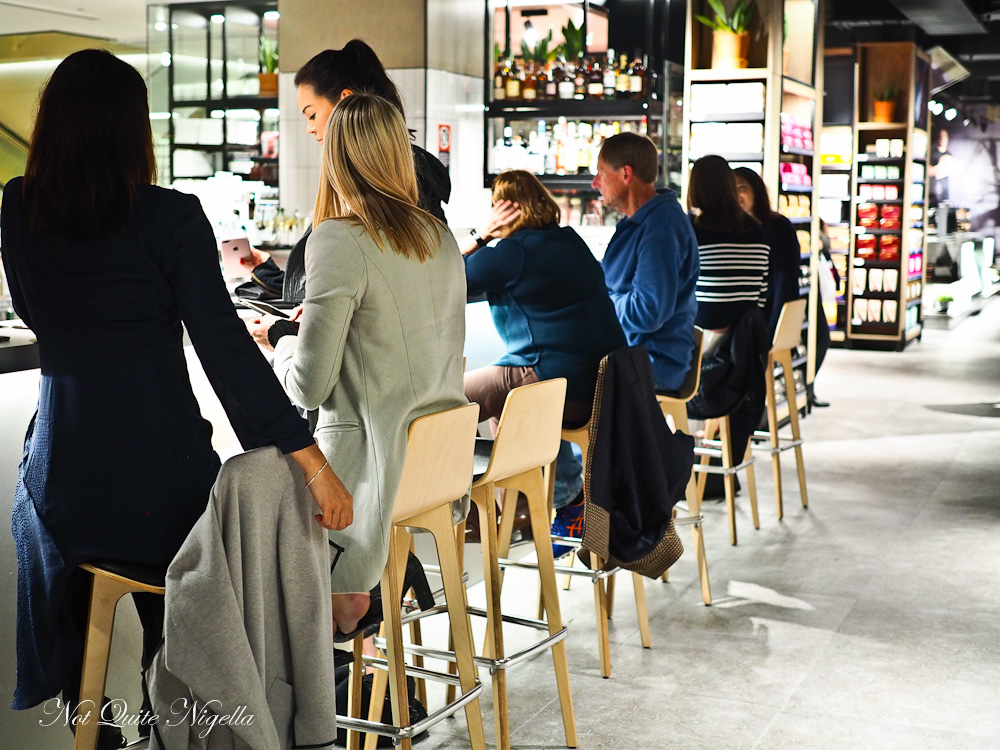 It all started with market research that David Jones had commissioned. While customers had fond memories of the department store, references to the once grand food hall was spoken about in the past. While it was celebrated 20 years ago it had failed to with the times. It became not a place to stay, rather it was a transactional space where people stopped in quickly to buy something and then left. Customers told David Jones that they wanted to be challenged. 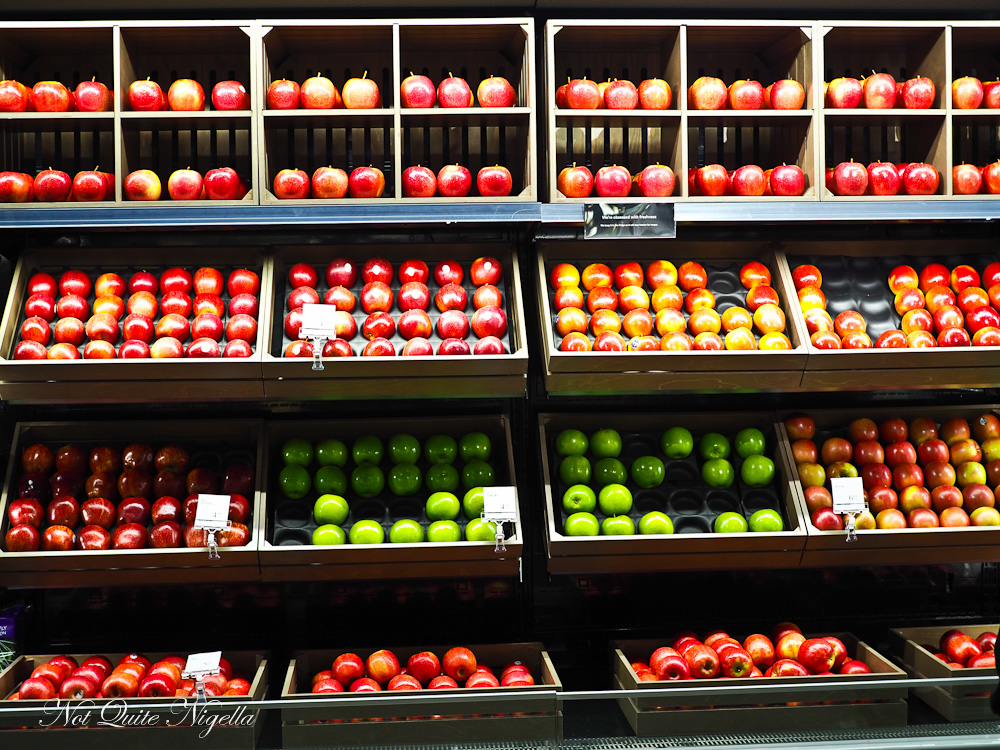 Open last Thursday, the food hall exceeded initial sales expectations from the first day. Part of the reason may be because chef Neil Perry has come on board. He is responsible for the food service areas. Previously the food service offerings were all rented out concessions but Neil brings a cohesion and expert hand to the food. I remember eating at the seafood counter a couple of years ago and being given a really odd and underwhelming seafood salad and I vowed I'd just go there for the shopping (and the chocolate dipped strawberries and figs- they've kept those, yay!). 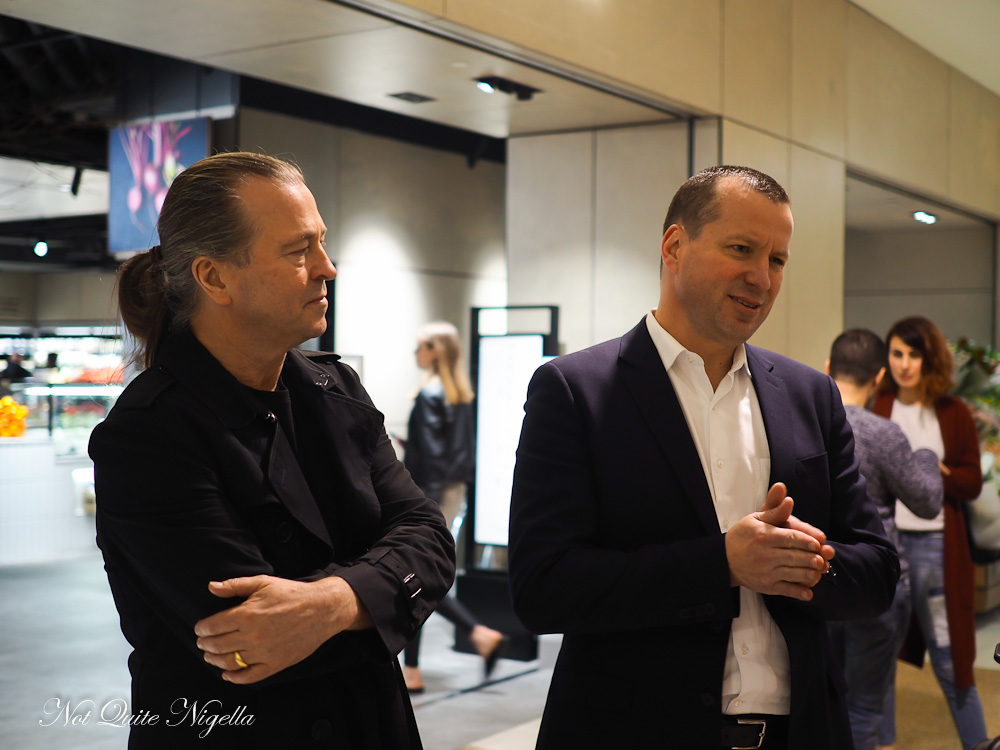 The first thing you notice when you walk in is perhaps the lighting. This is deliberate. Dubbed "restaurant lighting" rather than "department store lighting" it is designed to make people slow down and take notice of things. Mark Landini from Landini Associates who designed the food hall says, "We've embraced shadows...everyone looks beautiful in a Melbourne restaurant and they're often just lit by one bulb in the corner." 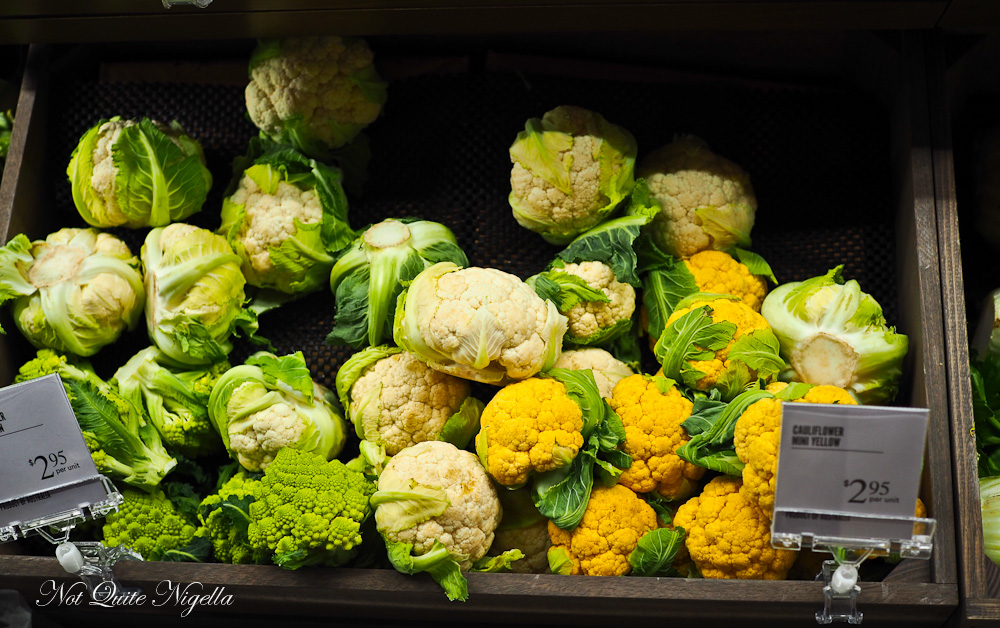 The space is also more textural. While white marble, the predominant background texture still remains there are more finishes with concrete, steel, glass, brick, leather, warm rich timbers and it is as Mark says, "A lot more shadow and less surgical table and kitchen." 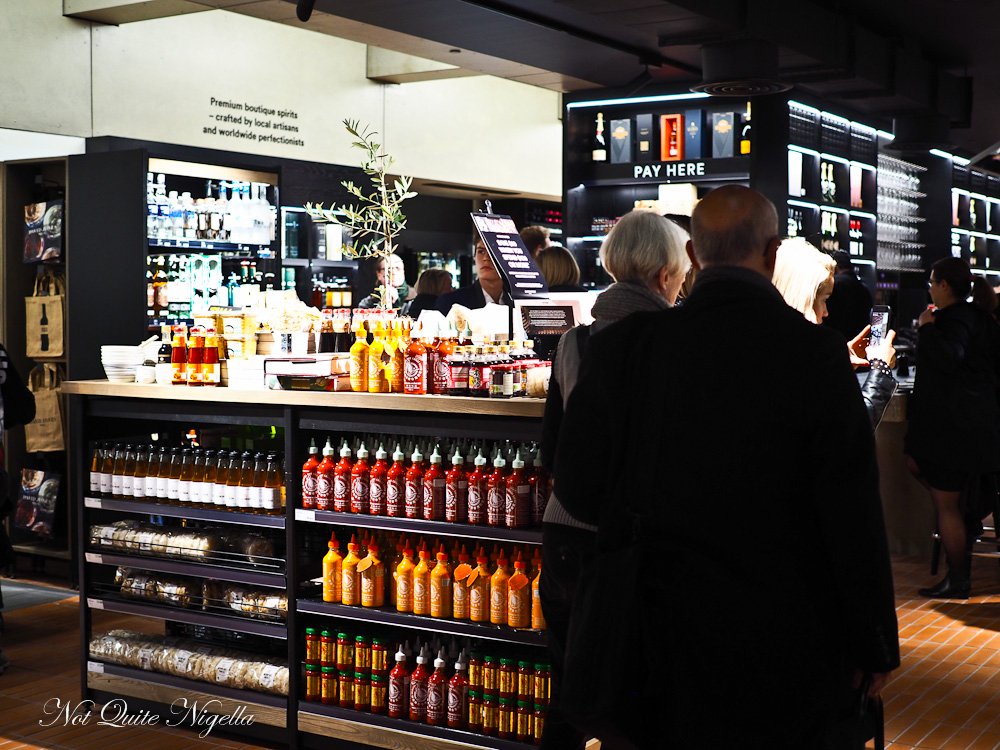 His inspiration for the design were markets round the world. "I grew up in markets when I lived with an Italian aunt in Rome," Mark explains, "and she would go to the market three times a day." When he asked her why she would go if she had a fridge, she cuffed him on the back of his head and explained that she goes to the market not just to shop but also to gossip and eat food. The want people to linger in the space and visit often. 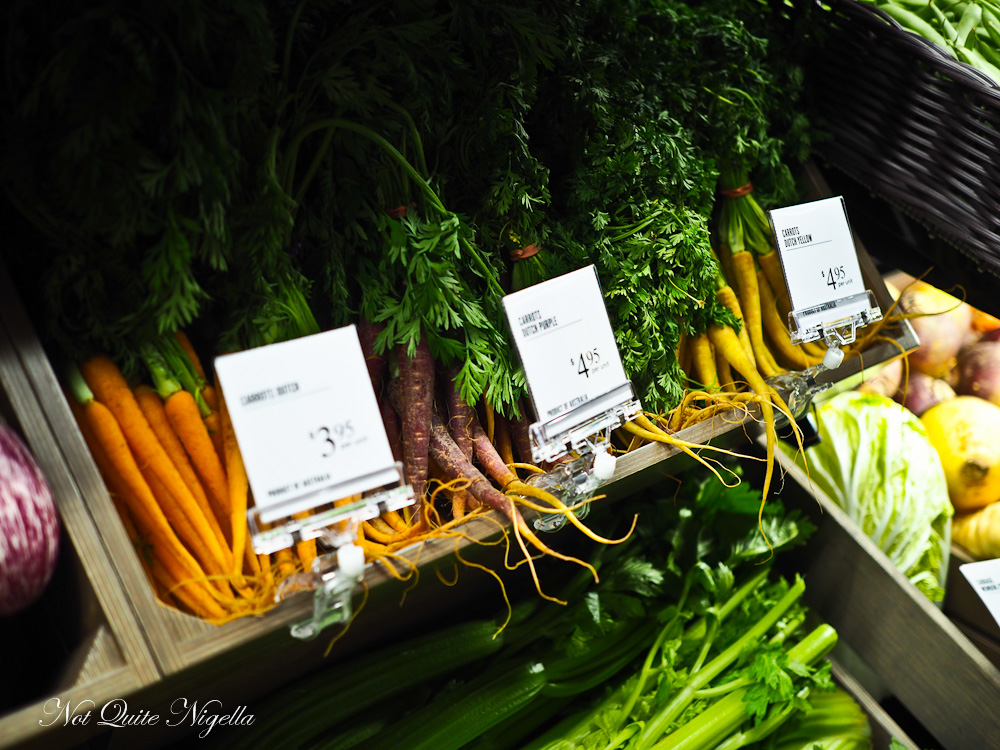 The food hall was also designed so that there was no one place where you can see everything-this is to encourage people to walk around. "The key idea is that you enter from above through the back of Neil's kitchen. It's not something that shows itself to you immediately, it makes you walk around and turn," says Mark. 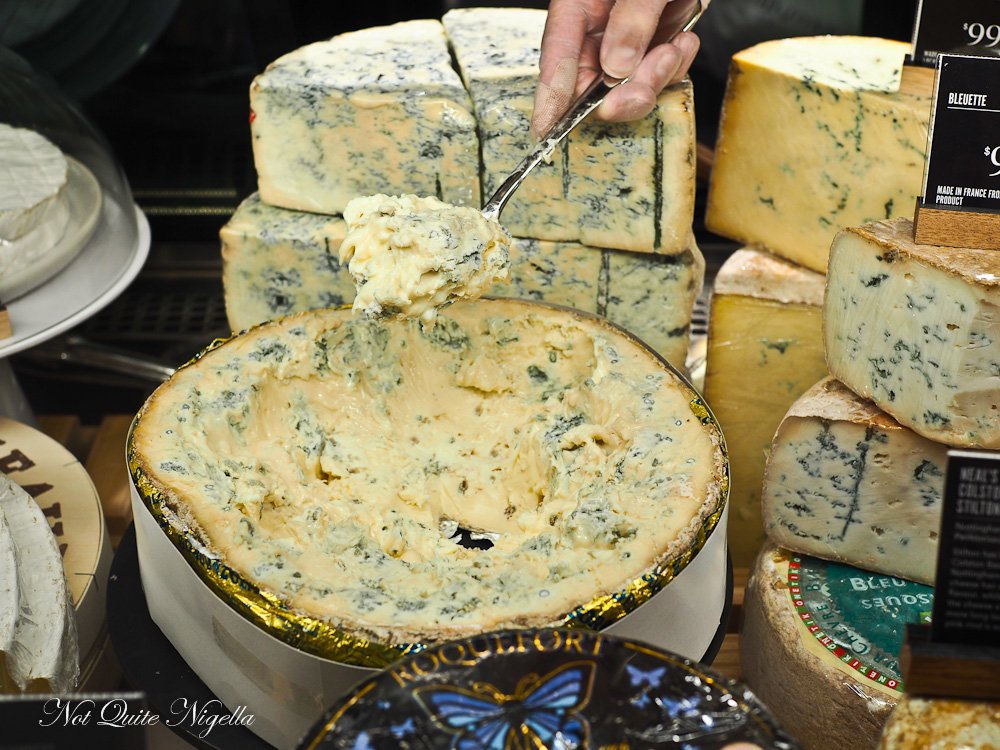 The budget for all the stores is $100million over 3 years. A spokesperson from David Jones explains the next phase includes, "a smaller ‘food market’ concept in Wollongong opening in October, the introduction of food offerings in existing stores in Sydney and Melbourne over the next year and the introduction of several standalone food stores in coming years. David Jones will also open a new enlarged food hall as part of the $200 million refurbishment of its Elizabeth Street store in Sydney’s CBD." 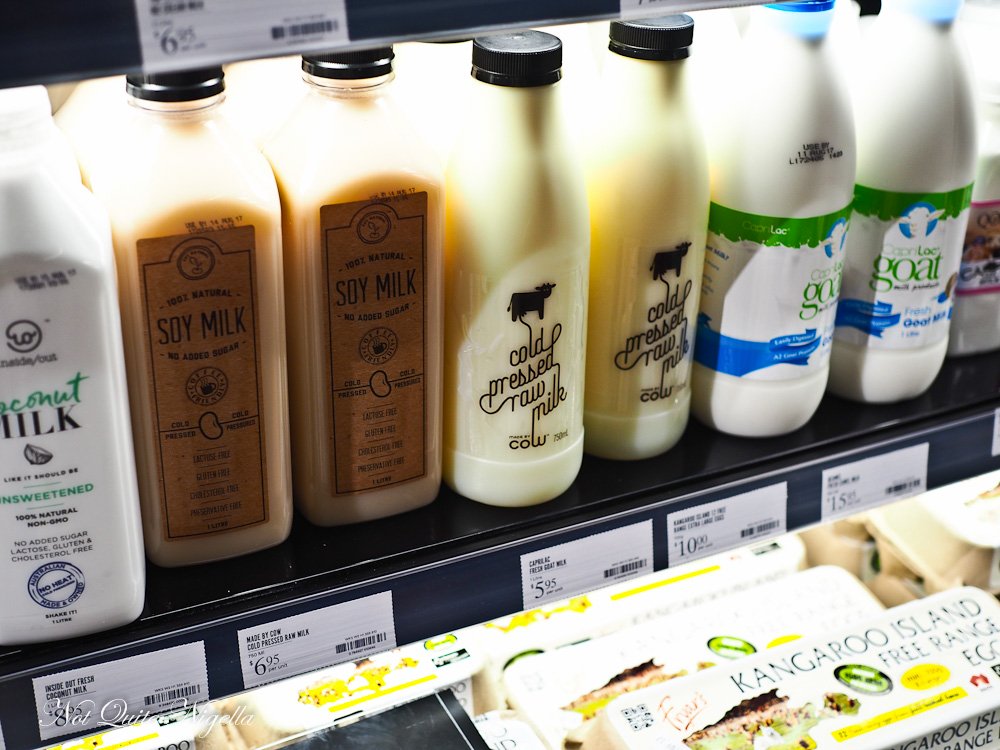 Apart from food service they also aim to stock a wide variety of food. Need Persian blue salt? How about Hawaiian, oak smoked or Cyprus salt? Group executive for food Pieter de Wet explains that 85% of the products sold are from Australia. 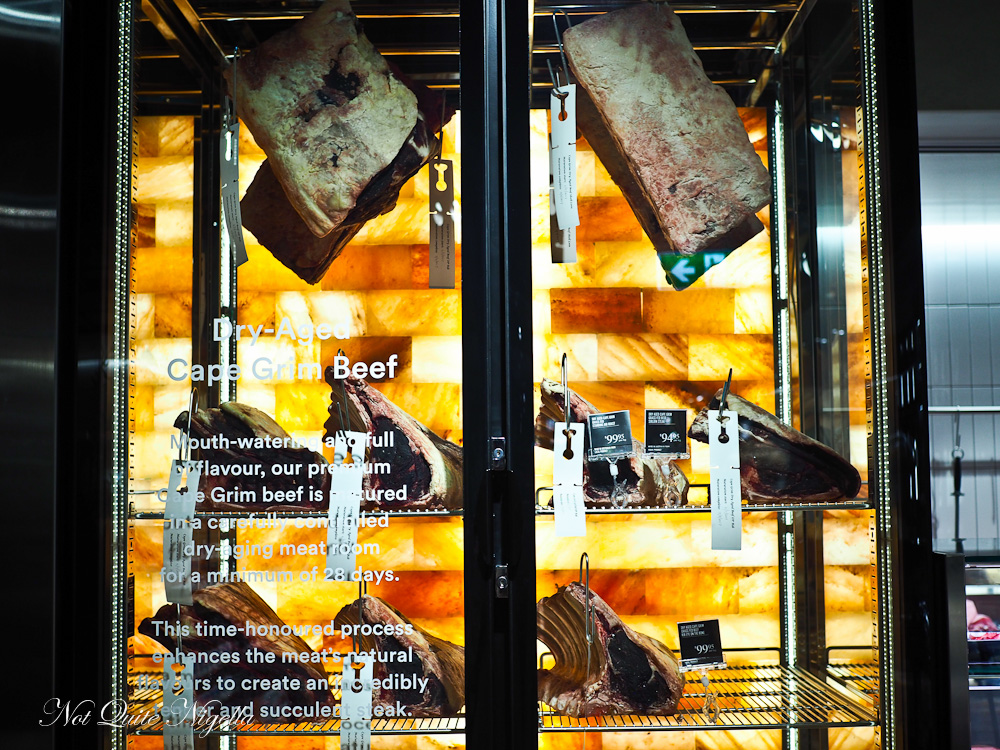 The initial inspiration for the food hall was Globus in Switzerland, Eataly and La Place in the Netherlands as well as Marks and Spencer. As David Jones is owned by Woolworths South Africa they tapped into the systems and processes of Woolworths to help make the shopping process simpler. Anyone sitting at any food station can now order something from across the food hall to eat. 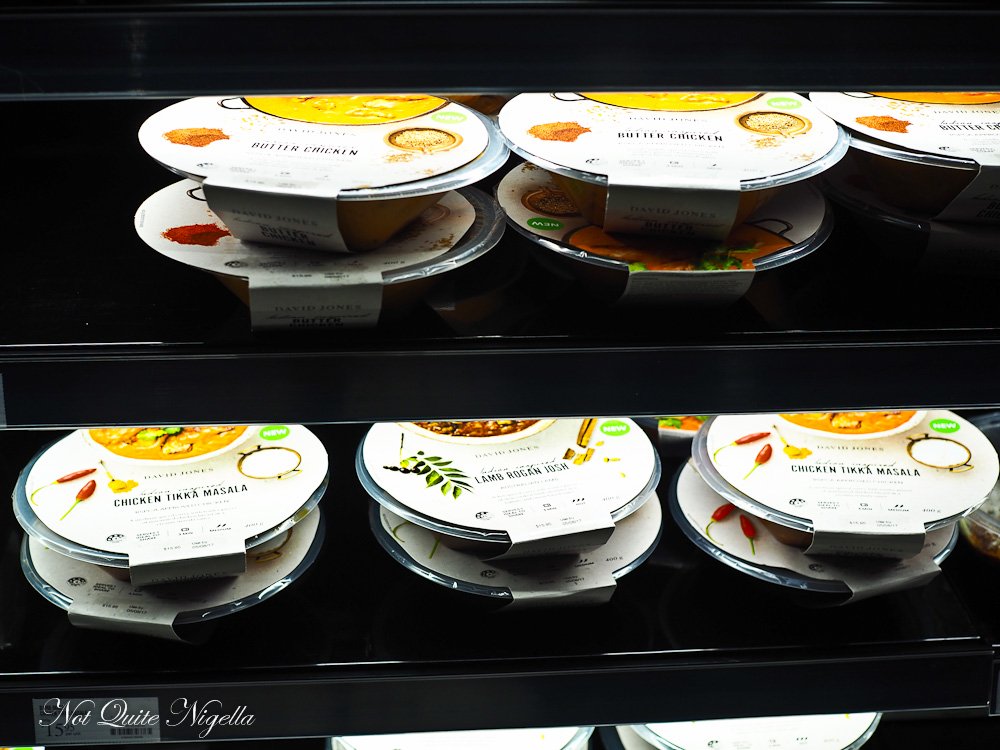 Ready to eat meals have shelf lives of 4 days instead of 30 so there are less preservatives that can affect the taste of food. The fruit in the salad has all been brix tested for sweetness so that people avoid getting a sour surprise. Displays of fish are restrained rather than deep, high displays full of fish. 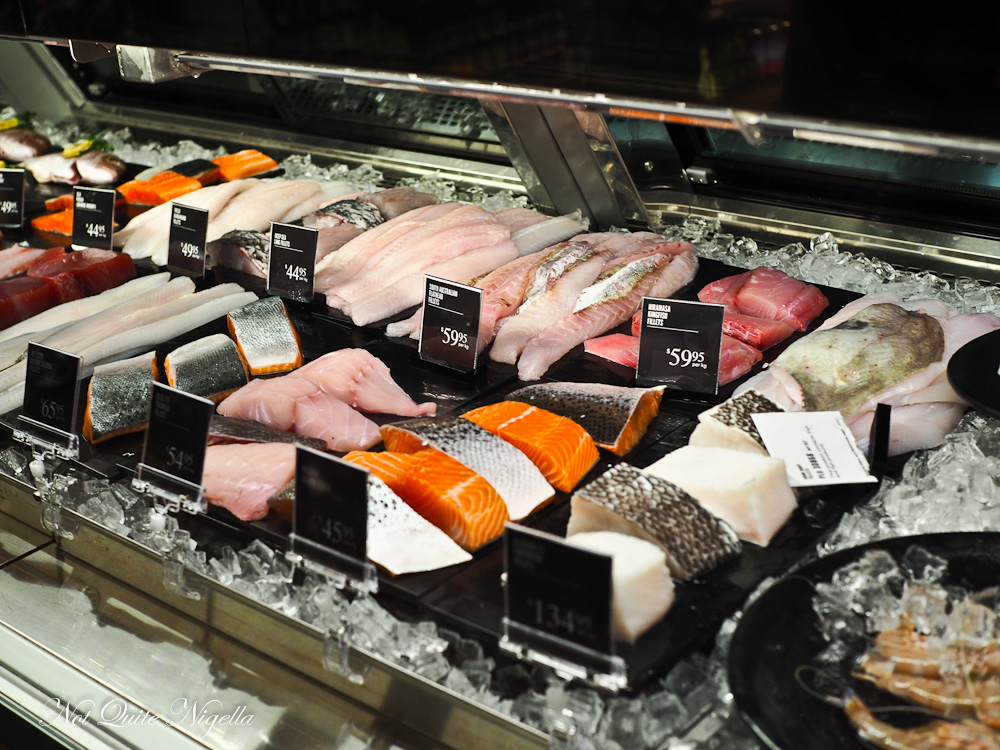 There are also collaborations with brands like loaves baked for David Jones by Sonoma and ice creams made for them by Serendipity made to their own specifications using free range eggs. 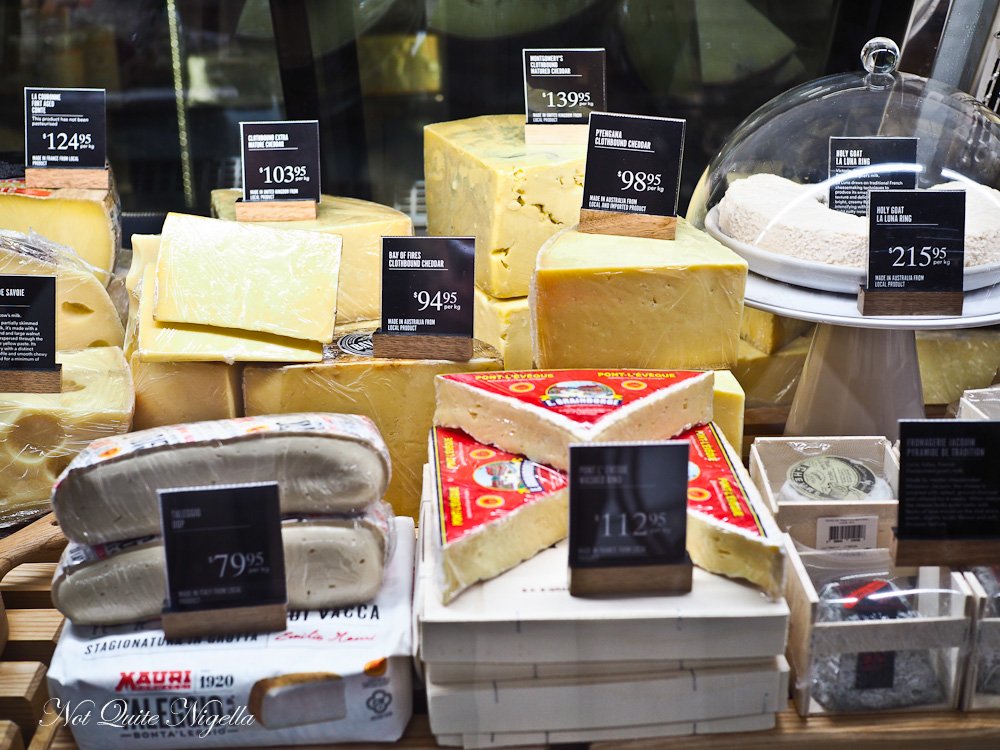 A new idea in the store is the private dining room housed in a glass sided room. People do look upon you curiously but it is an oasis of calm in a very busy store. As the name suggests it is for a group of ten and can be booked with the concierge for breakfast, lunch or dinner. 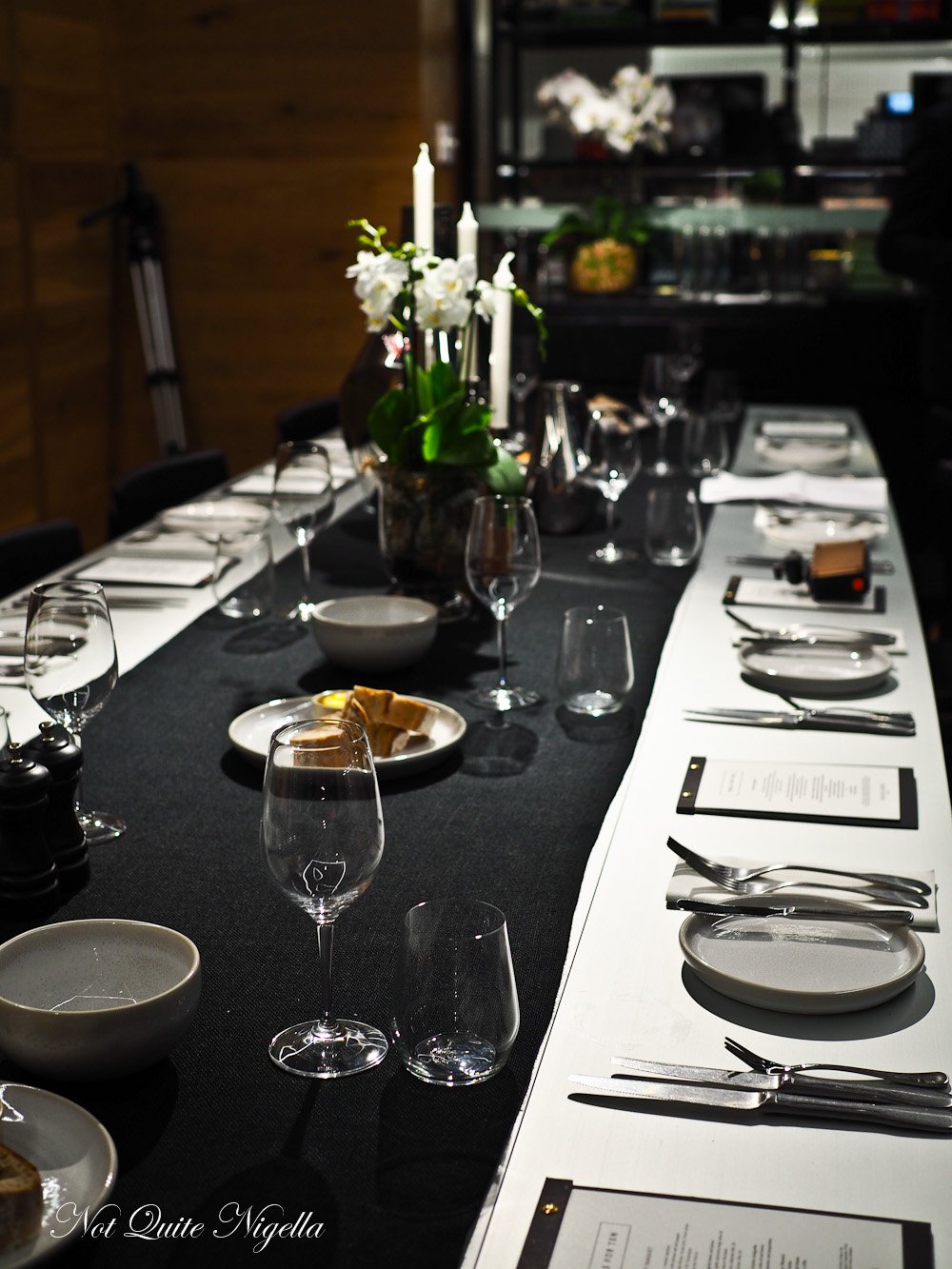 There are three set menus (two brunches and a lunch or dinner) available starting at $65 per person. We are trying out the "Sydney banquet" which is $80 per head. 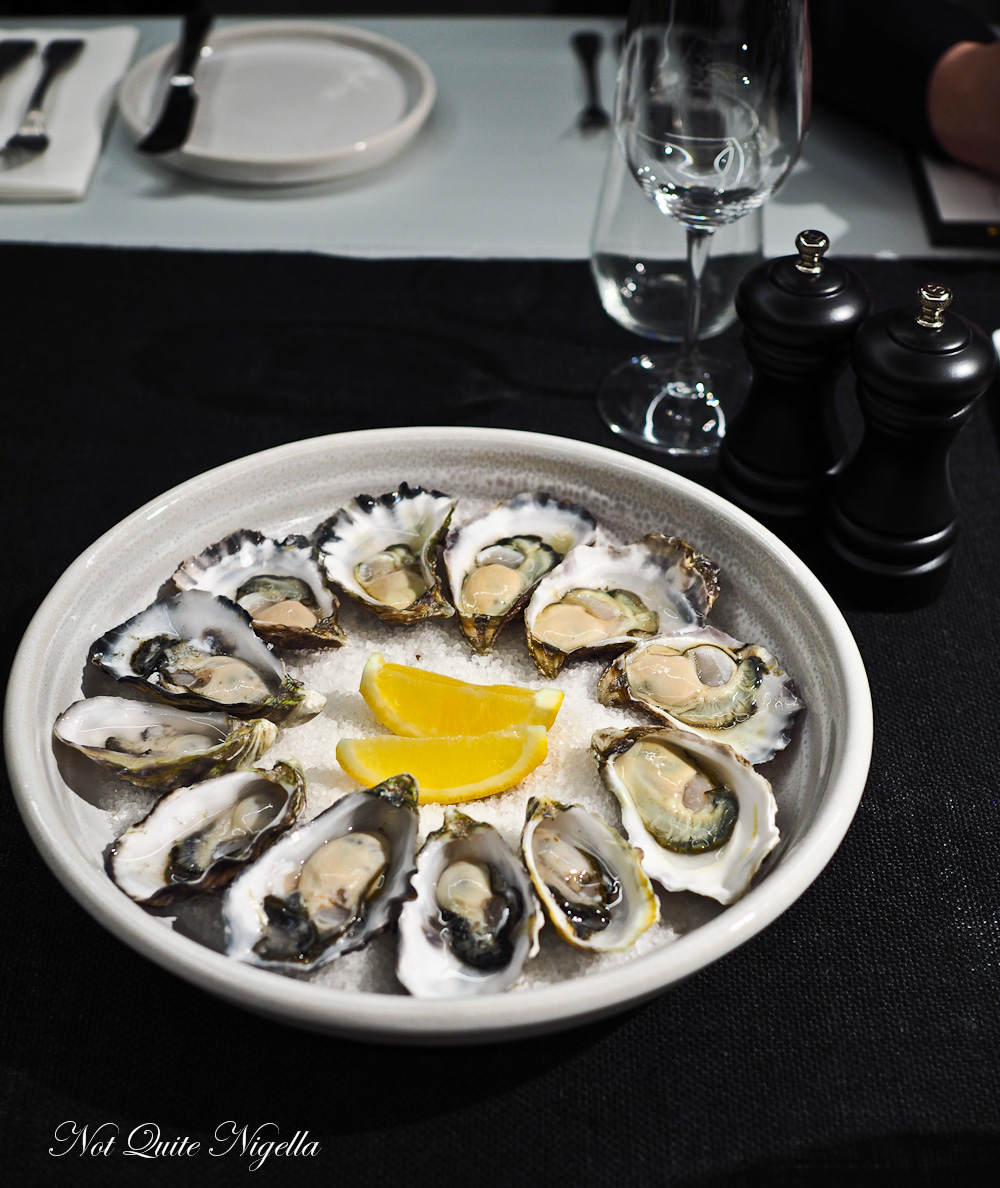 There are two types of oysters from Merimbula and Coffin Bay that are freshly shucked to order. They are wonderfully fresh and I am lucky enough to sit next to someone that doesn't eat oysters-more for me! :D 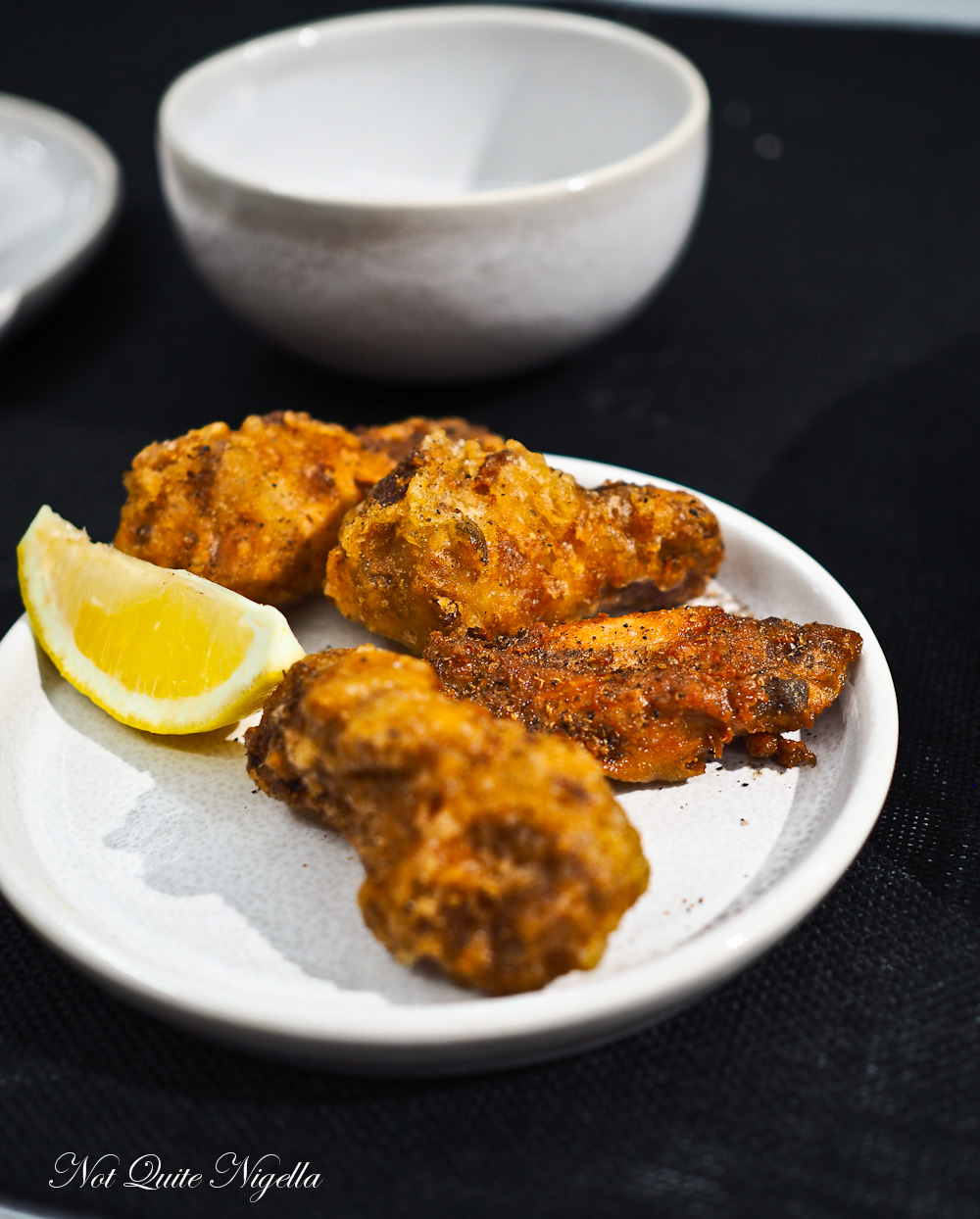 You know the part when you're talking to someone and you're meant to be eating nicely but the chicken wings are too good so you can't stop eating them and you figure "to hell with how I look eating a chicken wing?"" That was me. These are so delicious with a nice crust and the perfect level of seasoning. 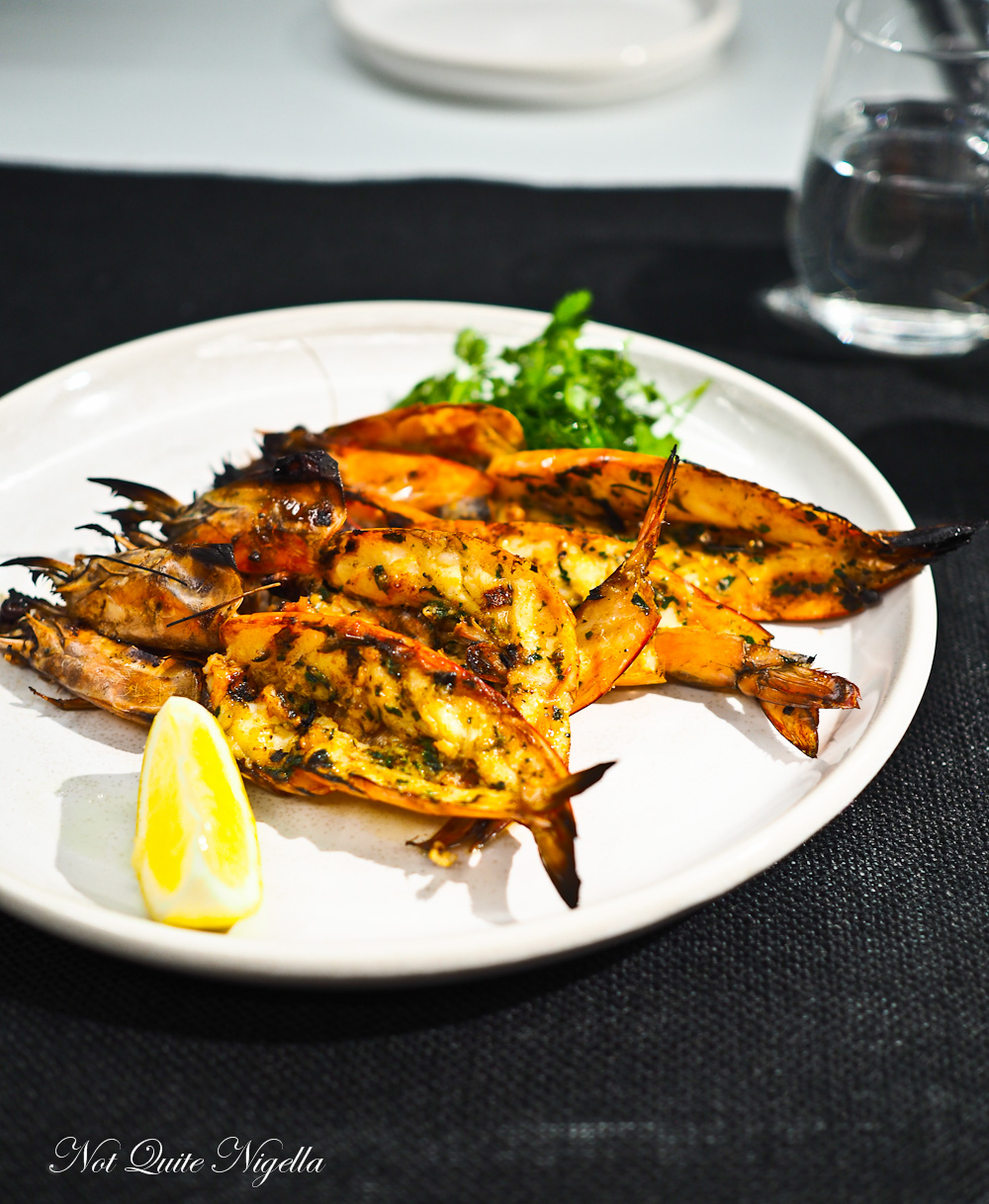 The prawns are well cooked, not overcooked or tough and seasoned simply with parsley, garlic and olive oil. 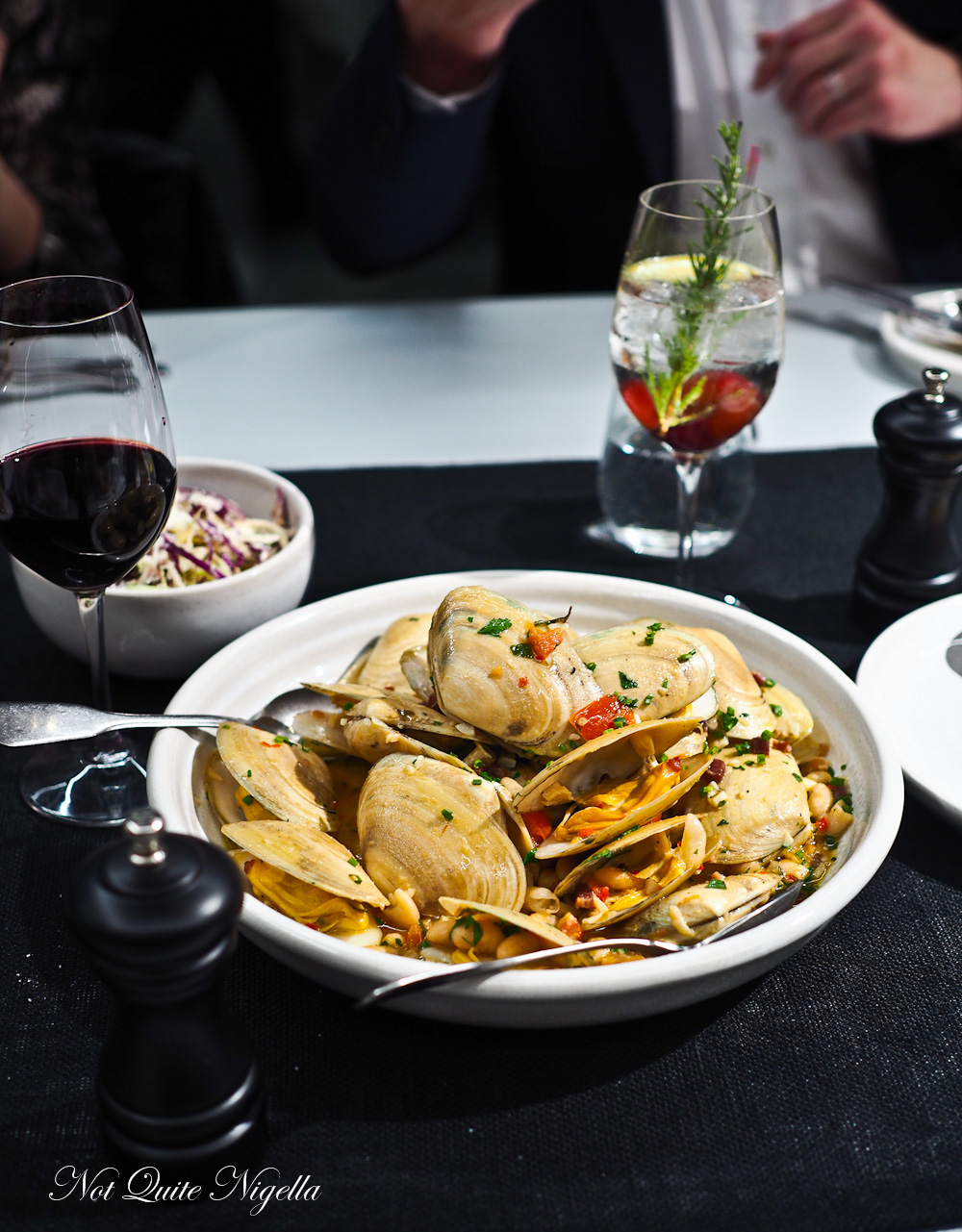 Hand down the favourite dish at the table (apart from the rib eye) are the clams. These larger clams from South Australia come with a wonderful sauce with soft white flageolet beans and diced jamon. The sauce is so moreish and made for the Sonoma bread and cultured butter that the meal comes with. There are several sides that come out-the shredded vegetable salad is like a coleslaw with a Sriracha vinaigrette and grated cheese. 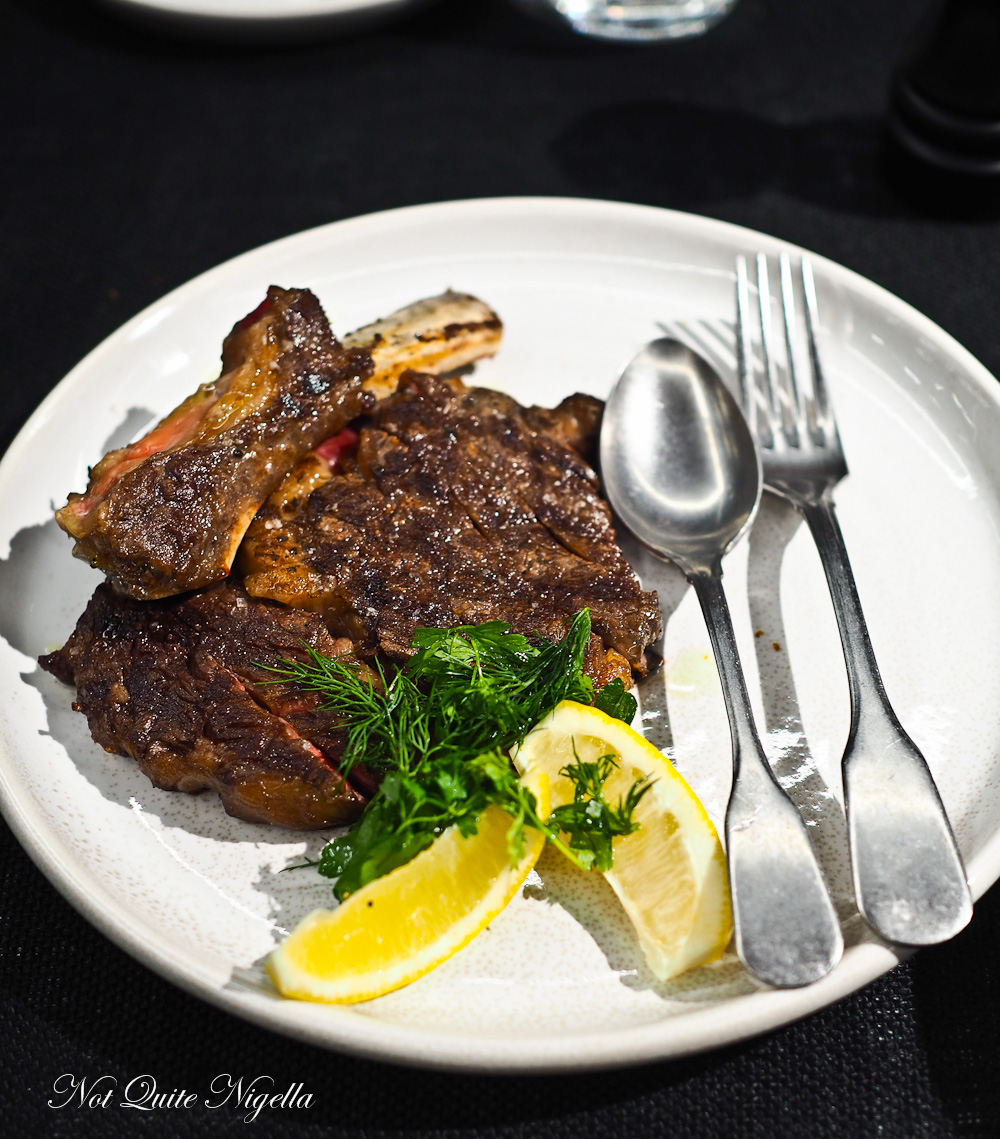 But the steak is a favourite too. Just tender, full of flavour and melting in the mouth this Cape Grim beef from Tasmania was dry aged for 2 weeks. There is salsa verde and mustard provided but the steak was good on its own. 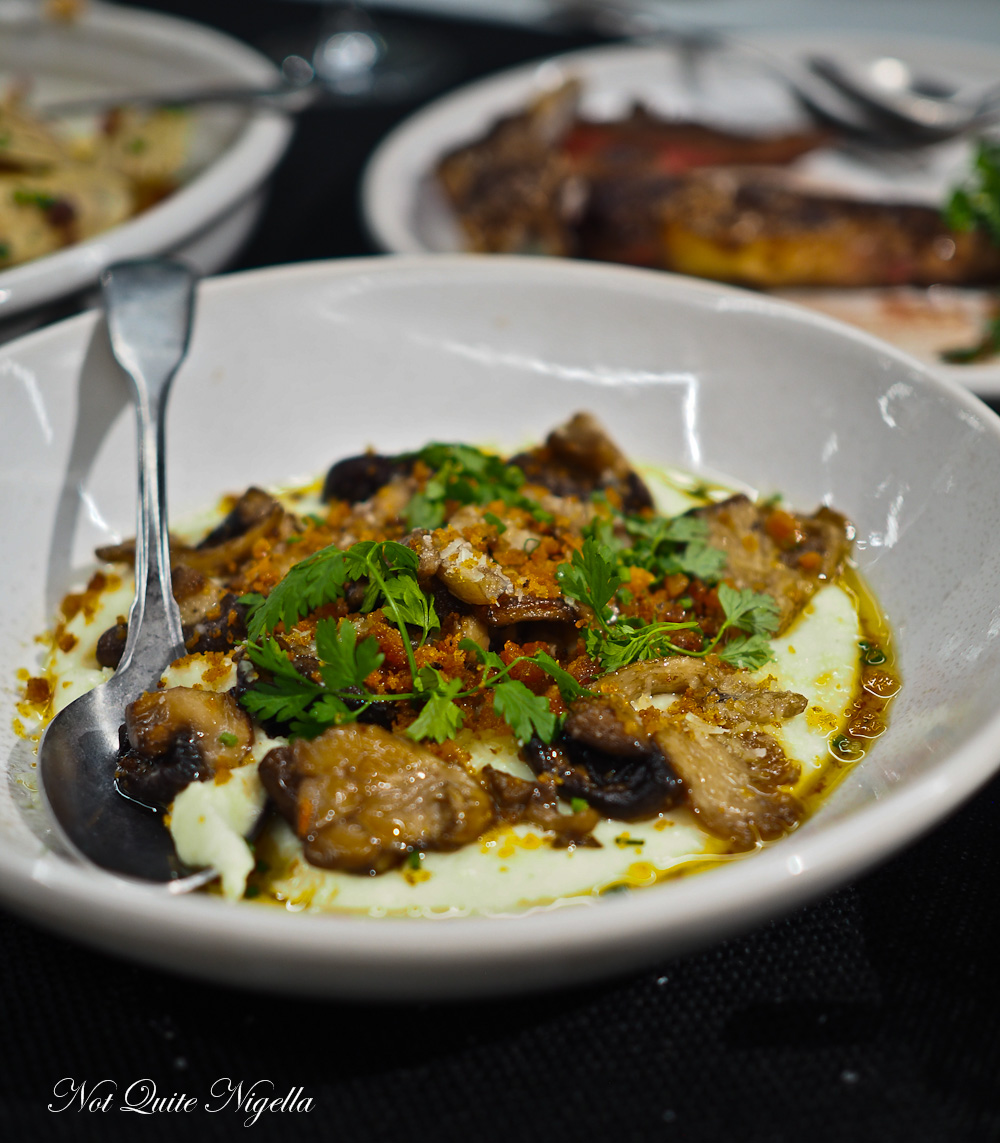 While the grilled mushrooms are sitting atop a bowl of creamy soft polenta with pecorino cheese and pangrattato to give it crunch. 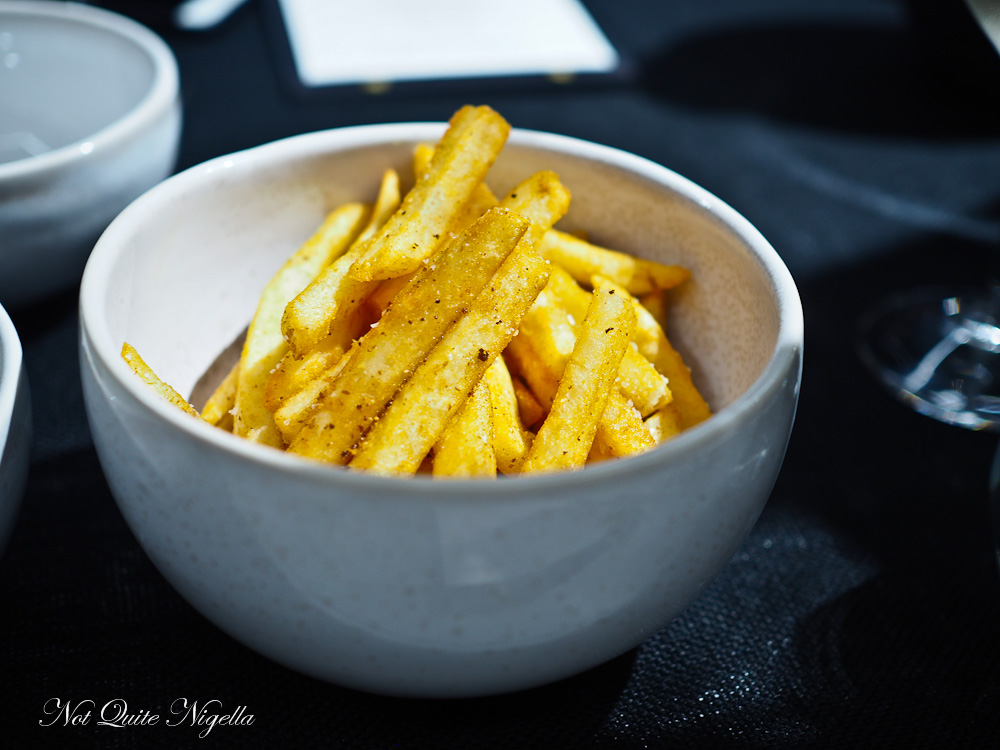 And that's a big yes for seasoned hot chips. These are served piping hot and the smoked paprika seasoning salt is moreish. 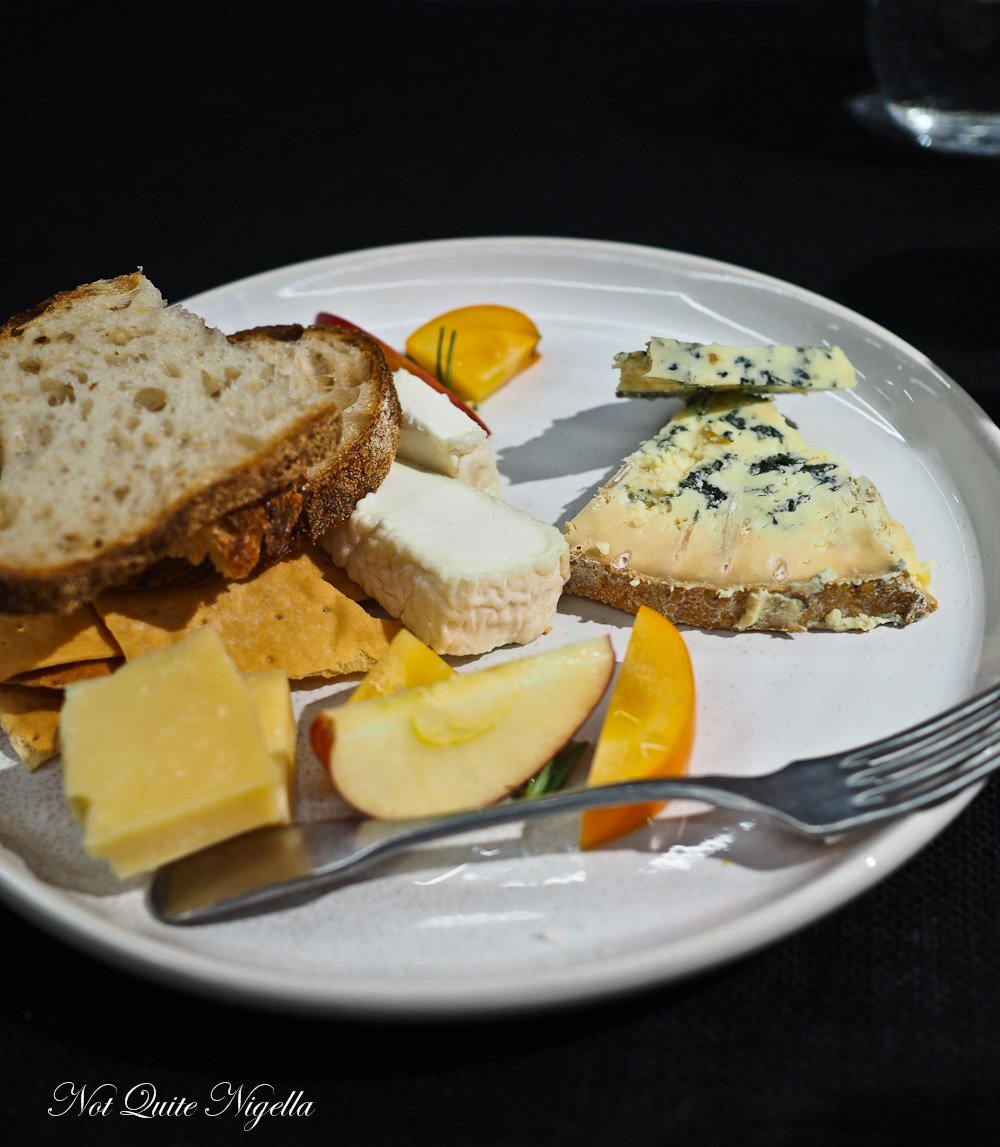 Selection of local and imported cheese

And to finish are a range of local and imported cheese from an American cheddar, Holy Goat la Luna goats cheese and a mild blue cheese. Followed by a little shopping expedition afterwards.

So tell me Dear Reader, do you notice things like lighting and design with restaurants and shops? How did you feel about the old food hall when you visited? Does having a chef like Neil Perry part of the offering motivate you to visit?

NQN was a guest of David Jones but all opinions remain her own.