Okayama Peach Fed Pork, Barazushi and The Tale of Momotarō The Peach Boy 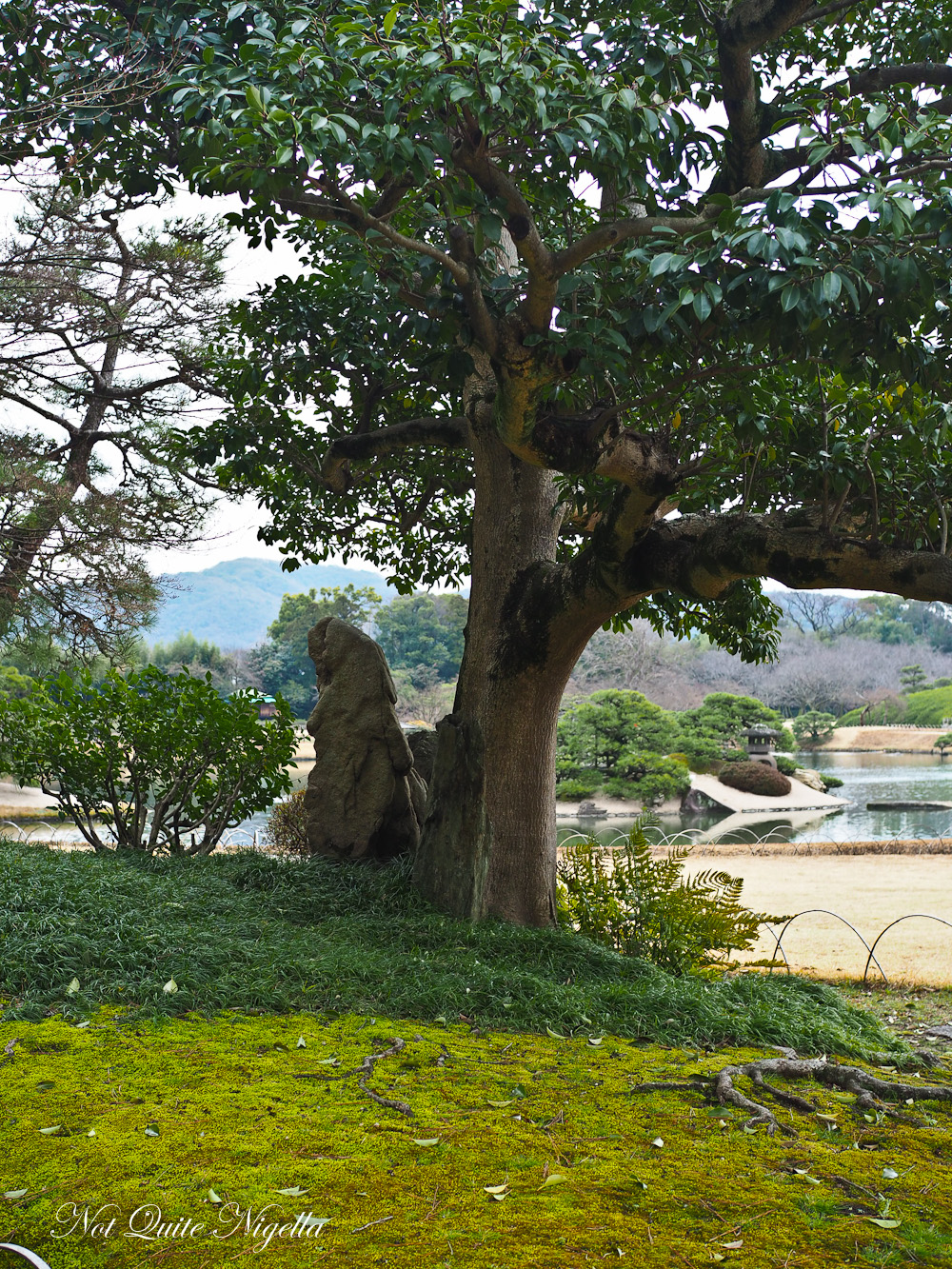 The shinkansen speeds through the tunnels towards Okayama. Oka means hills and yama means mountains and it's a 40 minute ride from Hiroshima in the Easterly direction. We reach Okayama and drop our bags at the hotel (the Granvia Okayama, again located at the train station). It's chilly again today and as I breathe out cloud dragons appear. Digging my glove lined hands deeper in my pockets I feel like a Michelin man with a thermal, dress, puffer and wool coat on.

We head out to Okayama's Kōraku-en, a short taxi ride away. It's a beautiful park that was completed in 1700 by the order of Ikeda Tsunamasa, a daimyo or Japanese feudal lord. Now the ground is a little threadbare and brown in colour. We walk through watching the enormous koi in the pond that outsize the ducks and take a seat at the tea house there. 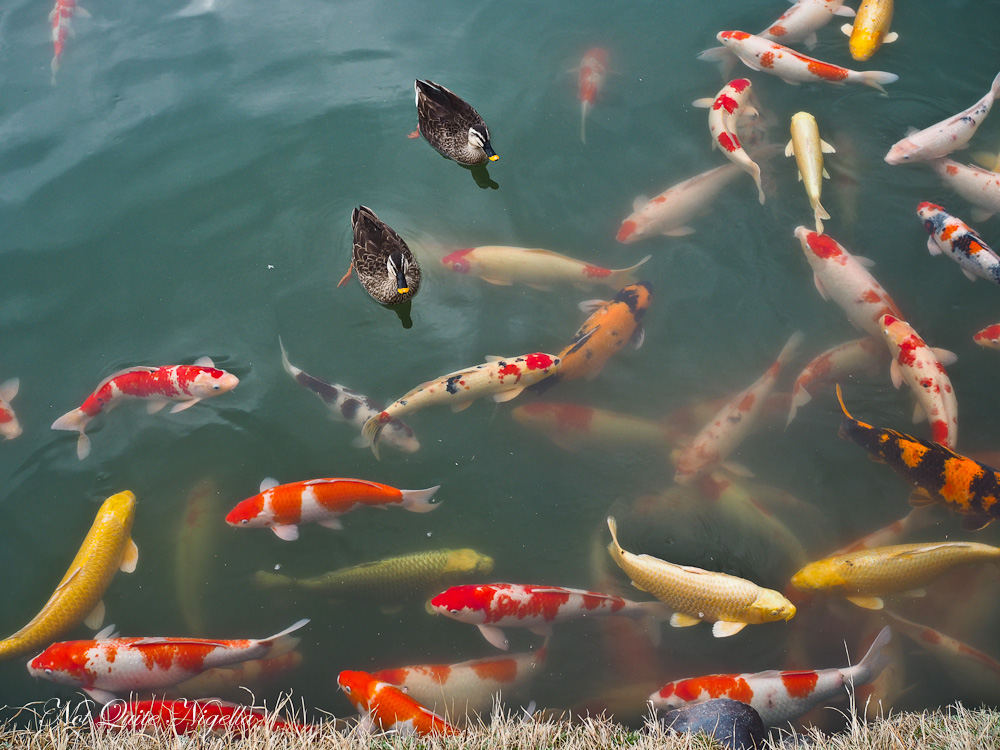 Japan is very big on set menus or "setto" where they combine a drink and food for a better deal. Here I try amazake which is a fermented drink made with koji, a by product of sake making. Because it is fermented it is said to be good for digestion and good for dehydrated skin. I try a sip and it's absolutely delicious and Mico san tells me that it isn't sweetened, it's naturally very sweet. And then starts a new obsession with amazake. Next to it is a fantastic matcha latte and two Japanese sweets. 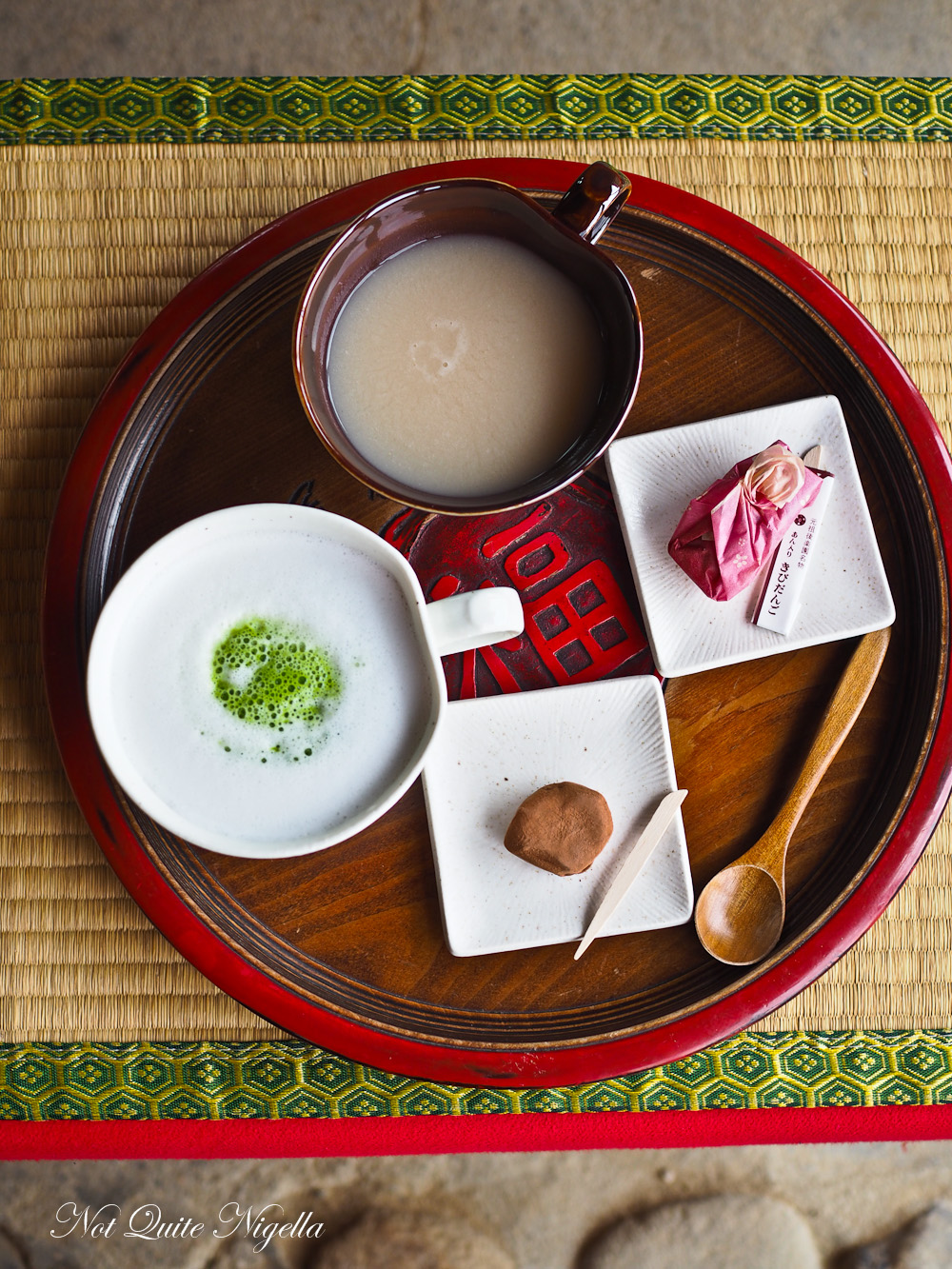 The first is called a kibi dango, a specialty of the Okayama region. It is famous for being part of a folk tale of Momotarō, the Peach Boy. Momo means peach and Okayama is also famous for its white peaches. In the tale Momotarō was a boy that floated to earth inside a giant peach. He came to the attention of a couple and became their son. When he was older he fought oni or demons with his troupe of animals including a talking dog, monkey and pheasant. They were successful and returned to the town as victors and the story of Momotarō was said to originate in Okayama. 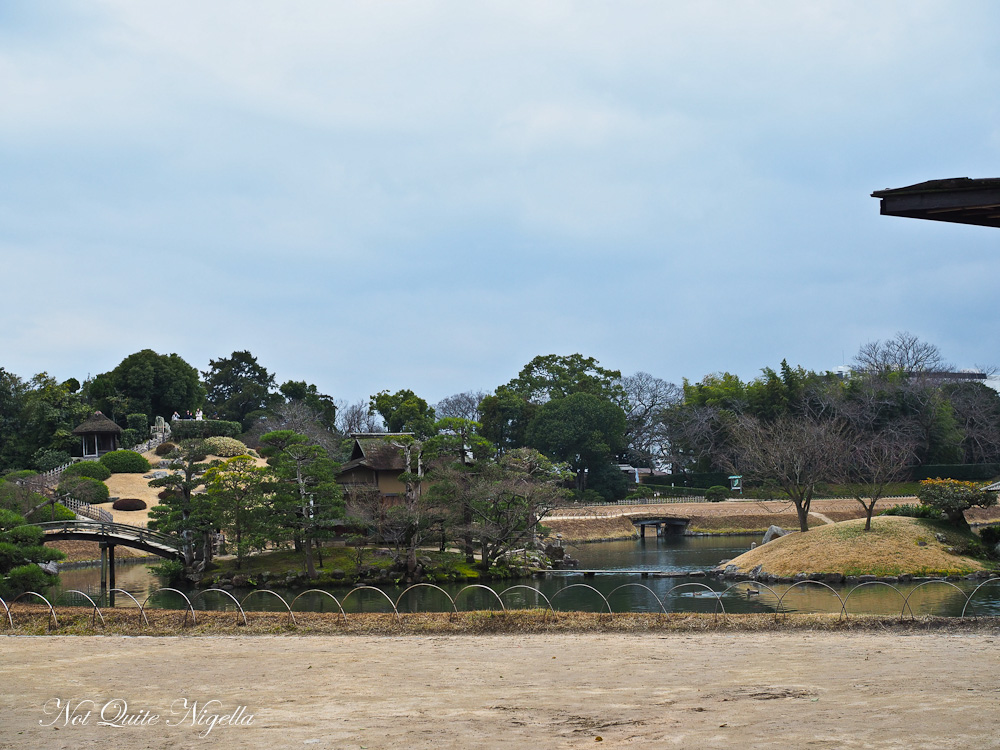 Kibi dango is made with glutinous rice flour and originally millet although mostly modern day kibi dango isn't made of this. It has a sweet powdered coating and there is also a chocolate version with crunchy, soft chocolate on the inside and cocoa on the outside. 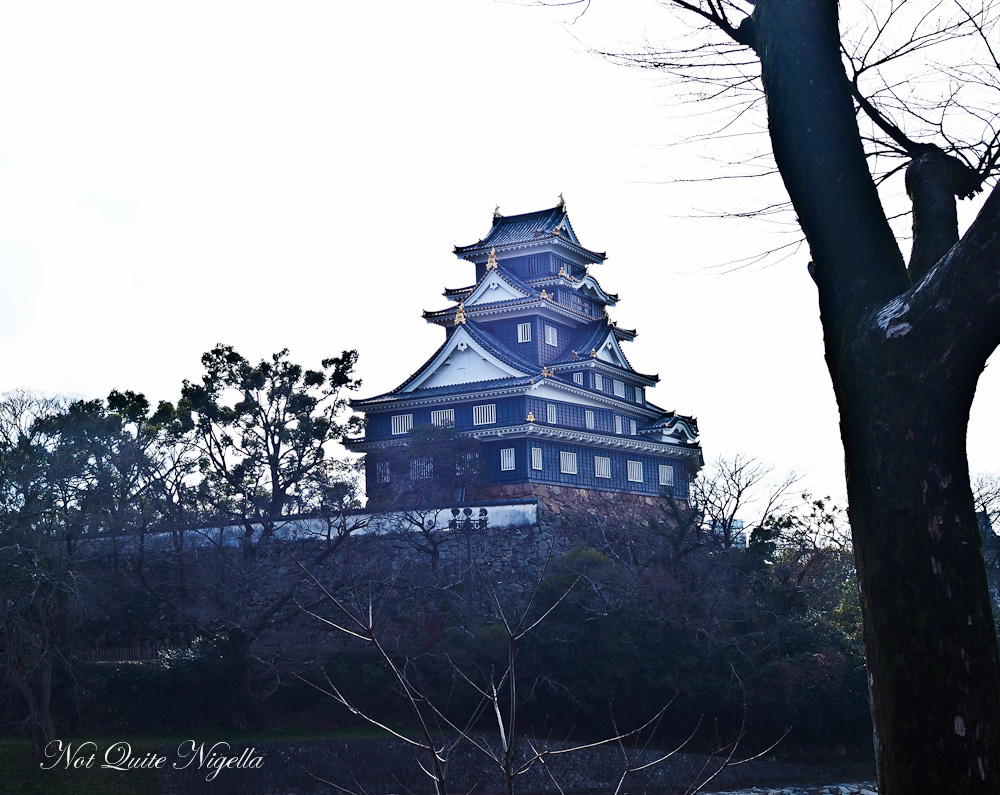 The trees at Kōraku-en where are starting to blossom with plum blossoms. These look similar to cherry blossoms and come in shades of pink and white. These will fruit to become plums that can be used to make umeboshi sour plum pickles. 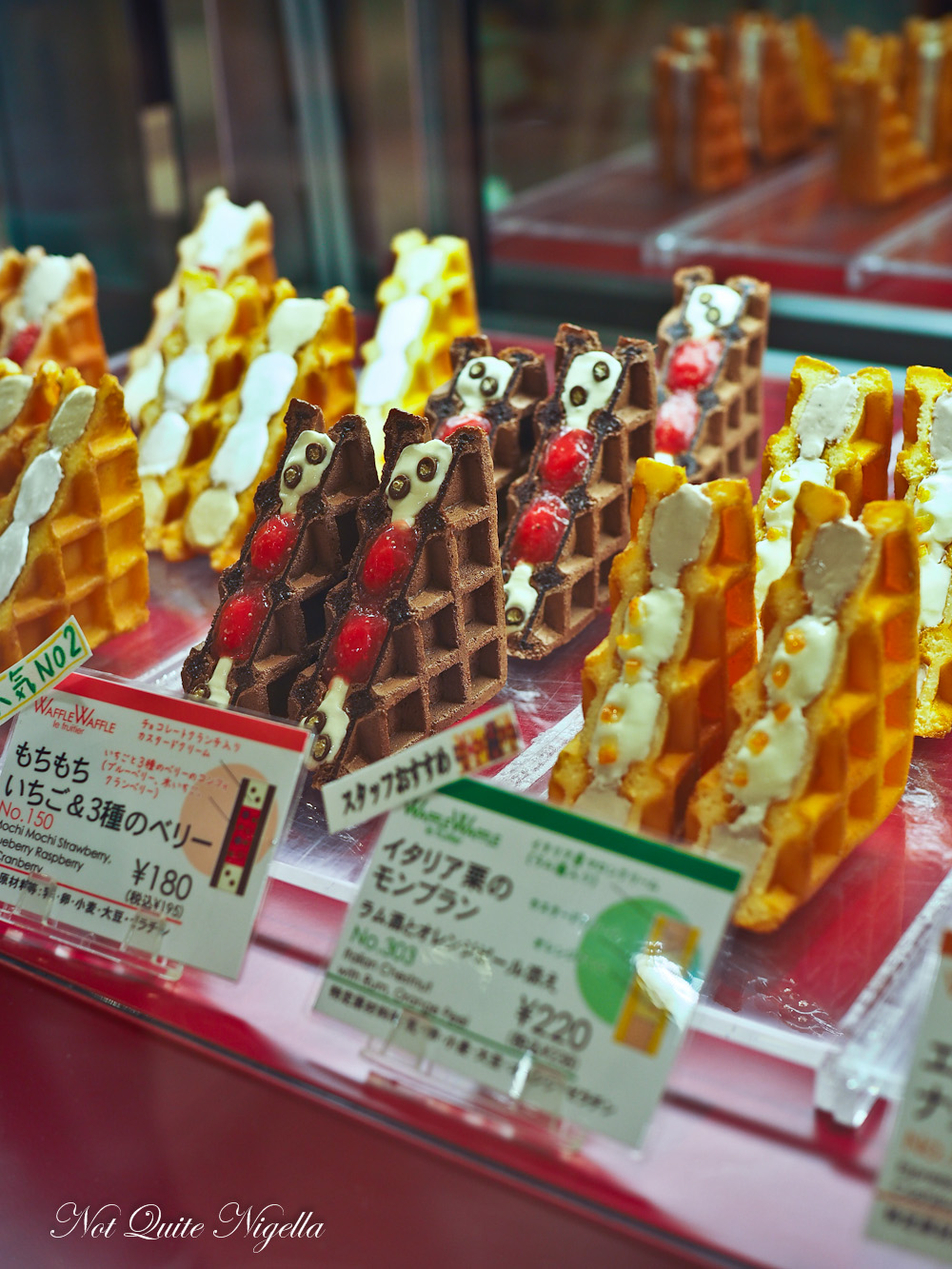 Mico san and I have a bit of time left so we head back to the hotel and gawk at the depato (department store) food displays. I am transfixed by a waffle display that is so glistening and perfect that I have to ask if it is real or not (it's real). We buy a strawberry waffle because strawberries are in season. Like many Japanese versions of Western sweets it's delicious, very soft and light and not overly sweet. 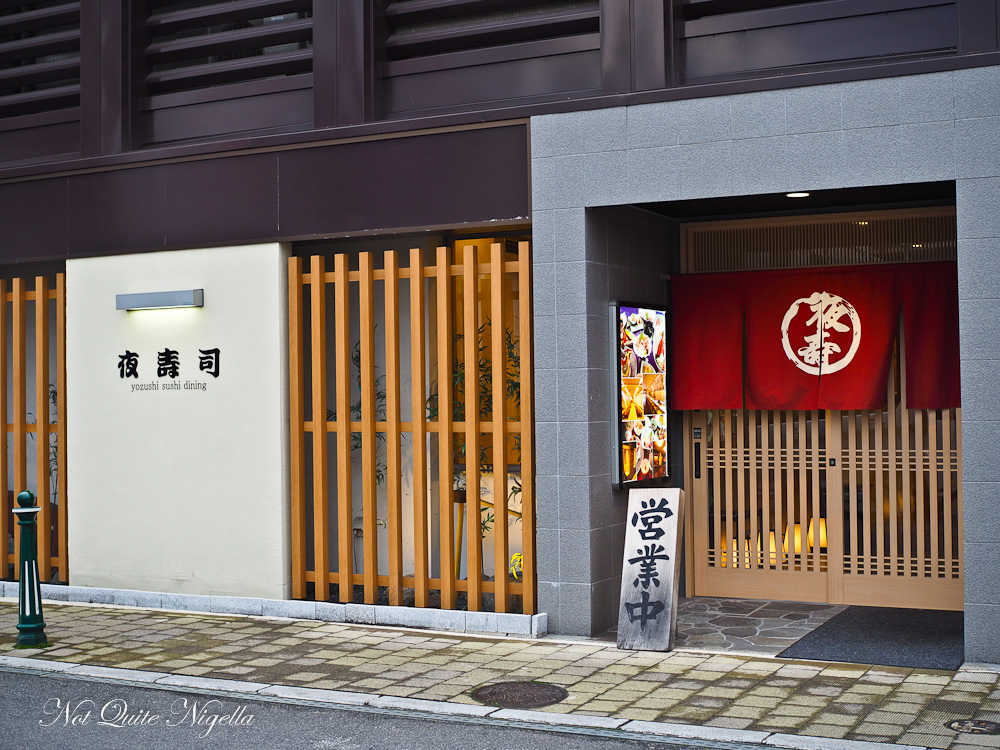 Our stop for dinner tonight is Yazushi Tamachi Honten a short 10 minute taxi ride away. It's a high end sushi restaurant that has fresh sushi and sashimi as well as Barazushi, another specialty of Okayama. This is a similar dish to Chirashi zushi where a bed of rice is covered with various toppings. 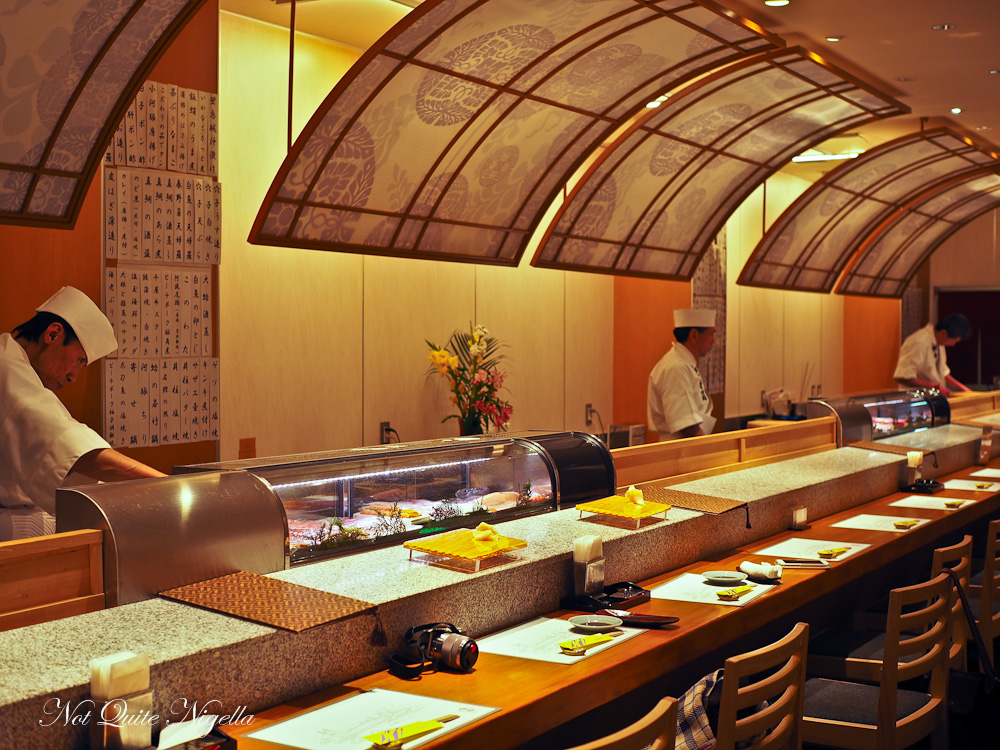 In Barazushi the toppings are all cooked except for a couple of items. The story behind Barazushi is that in the Shogun times the Okayama hancho or head Shogun decreed that the ordinary people should subsist on a diet of one bowl and one soup for the greater good. But being clever, they realised that in one bowl they could still eat well by adding layered toppings. 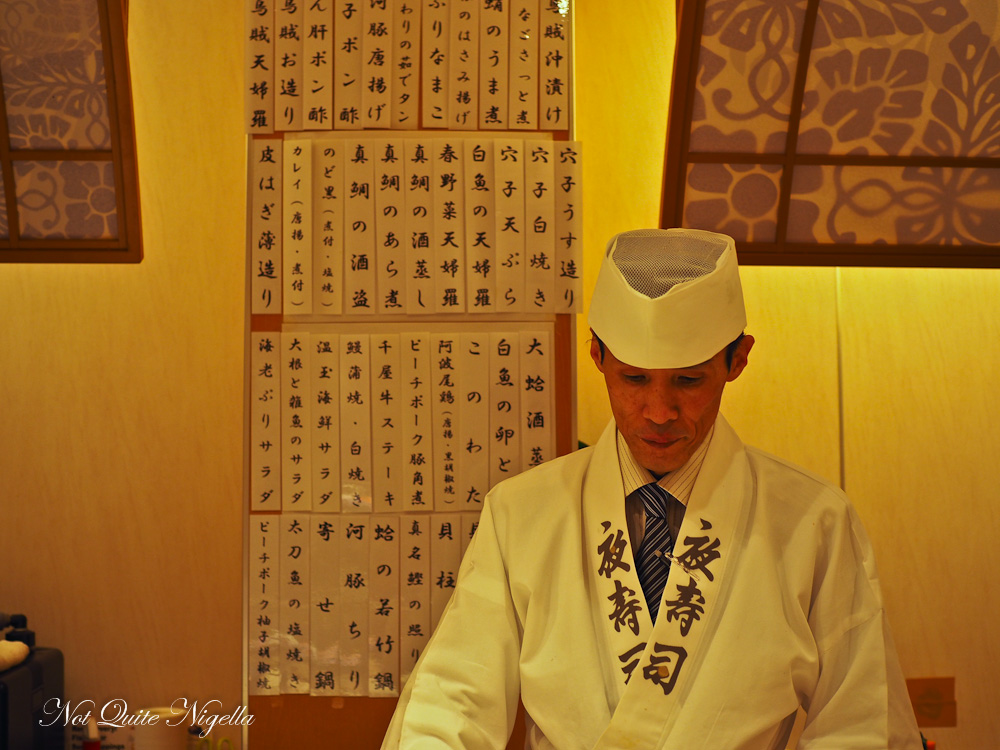 Barazushi here at this restaurant is a divine, refined dish. Sushi rice is mixed with two types of vinegar including a rice vinegar. It then has a layer of sliced tamagoyaki or sweet egg omelette and then layers of mogai or sea shell, anago or saltwater eel, lotus, shiitake mushroom, bamboo shoot, Spanish mackerel, prawn and last but not least is mamakari, one of the fish that is most associated with Okayama. It's a small herring type of fish and best eaten from February to April. It has a strong salty but not overpowering flavour to it. 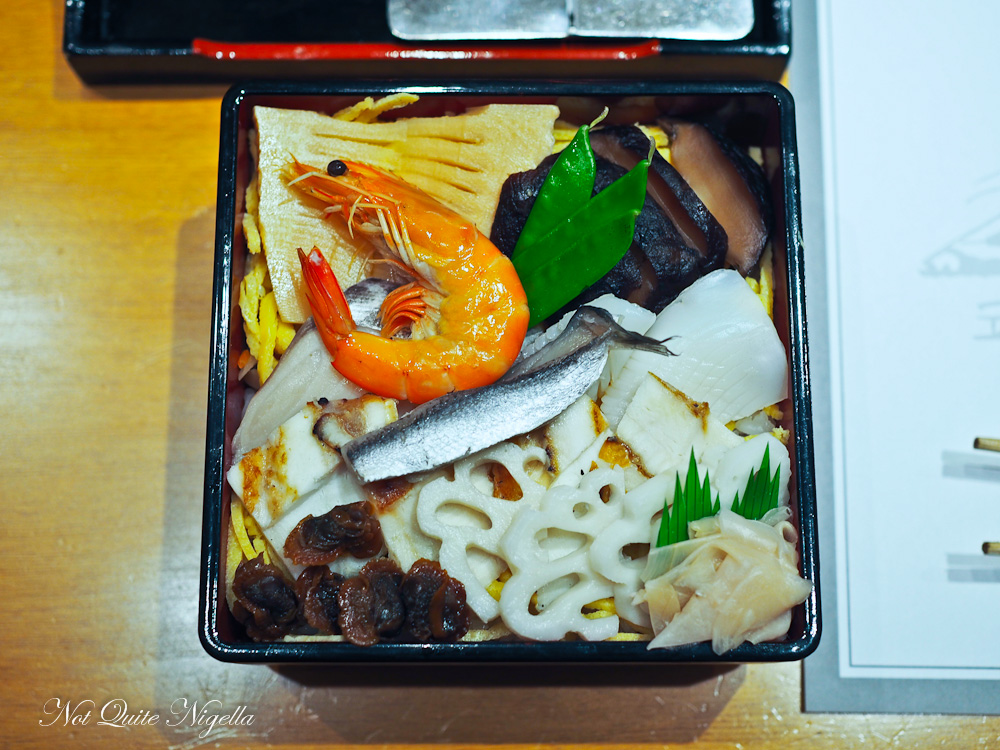 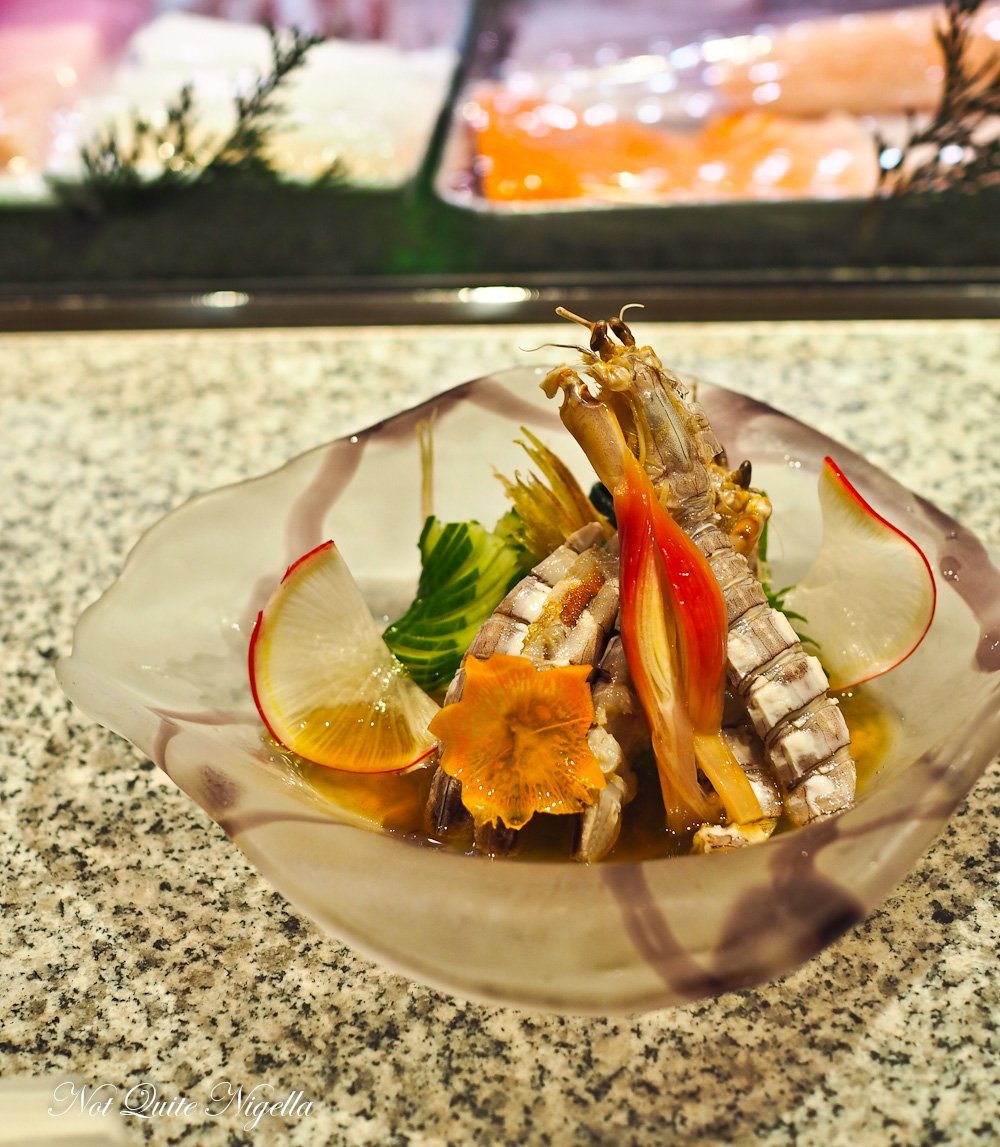 Mico san also orders some Shako, also called Squilla or mantis shrimp, a delicacy that is similar to prawn in appearance. However the taste is more like fish and especially savoury because these beauties have roe inside them which is a real treat. These come with some split Myoga or Japanese ginger and perfectly sliced cucumbers. 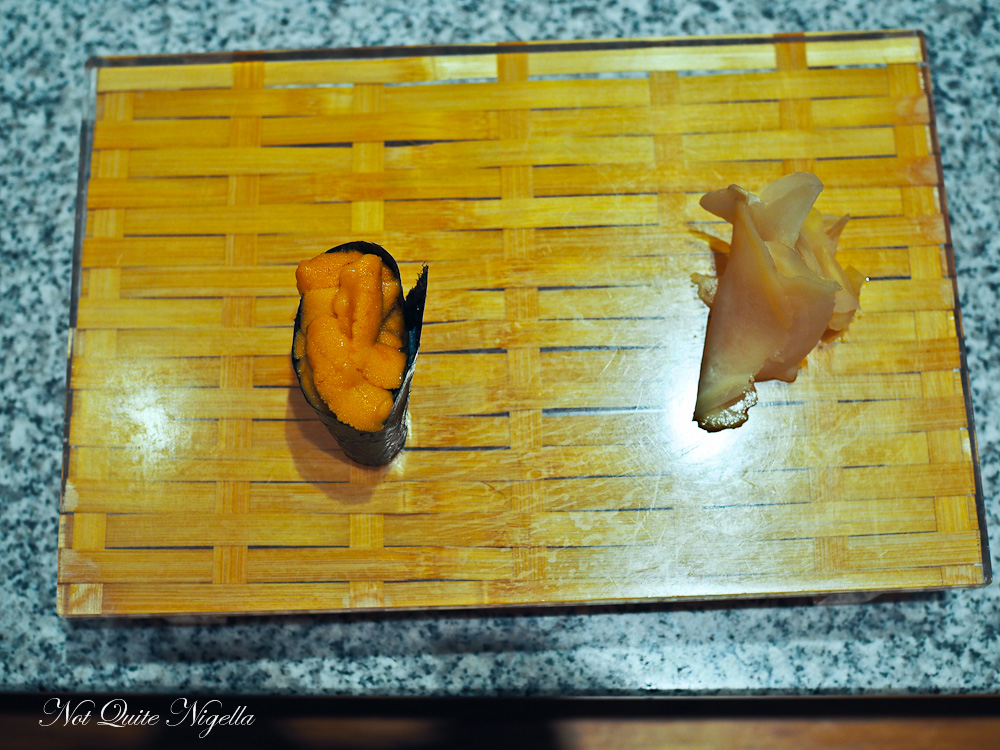 She shows me the best way to eat sushi that is wrapped in nori. You can of course use your hands which is the easiest way and tip your sushi upside down so that the fish gets a quick tap in the soy sauce (and as an aside, many in Japan use a different sort of soy sauce for their sushi vs cooking). But with nori wrapped sushi the best thing to do is dip a small piece of ginger in soy, dab it gently on the fish or in this case uni or sea urchin roe and then eat it with your hands or chopsticks. 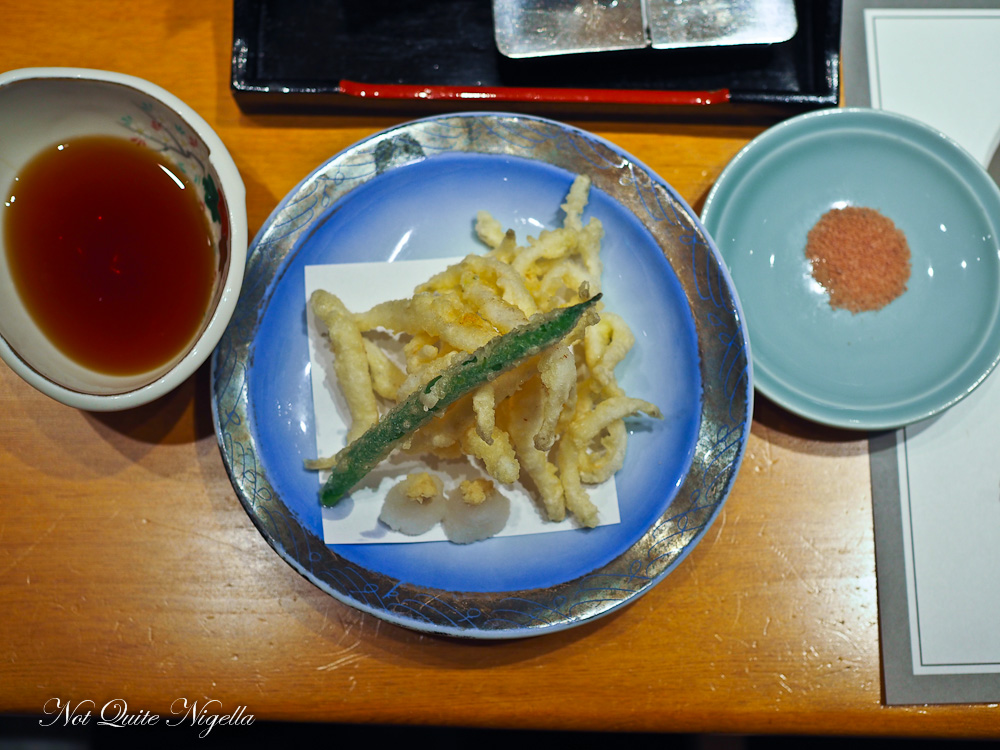 Mico san next orders Shirauo or small white fish coated in a tempura batter and deep fried. It comes with a tempura dipping sauce which is actually something that I don't tend to use as I like the tempura to stay crunchy. They bring us a salt instead that is infused with umeboshi plum that brings out the flavour of the shirauo perfectly. 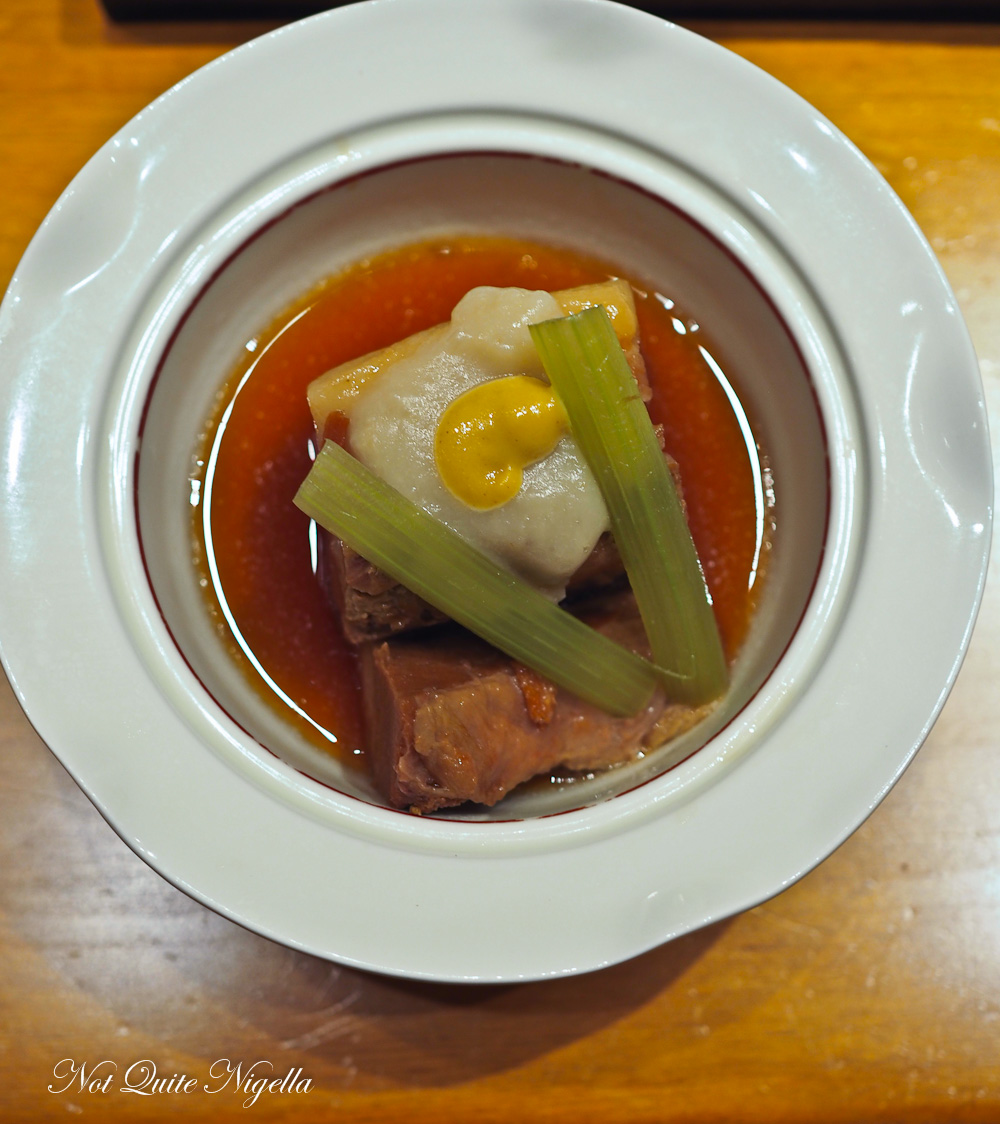 Our last dish is another Okayama specialty and it's an absolute beauty and if there's a reason to travel for one dish it's this. The pork (buta in Japanese) in the north of Okayama is fed on peaches. They cook the pork by slow simmering it in water with komenuka or rice bran. This helps soften the pork and they remove the scum and any impurities so that the komenuka can do the work. It is then cooked with the flavourings and then served in a flavoursome soup with fuki mustard and pureed nagaimo on top. This is one of those dishes where the texture is absolutely sublime. It melts in the mouth and you are forgiven, actually it's absolutely fine to raise the bowl to your lips and slurp some of the liquid along with bites of the meltingly tender pork, fat and all. 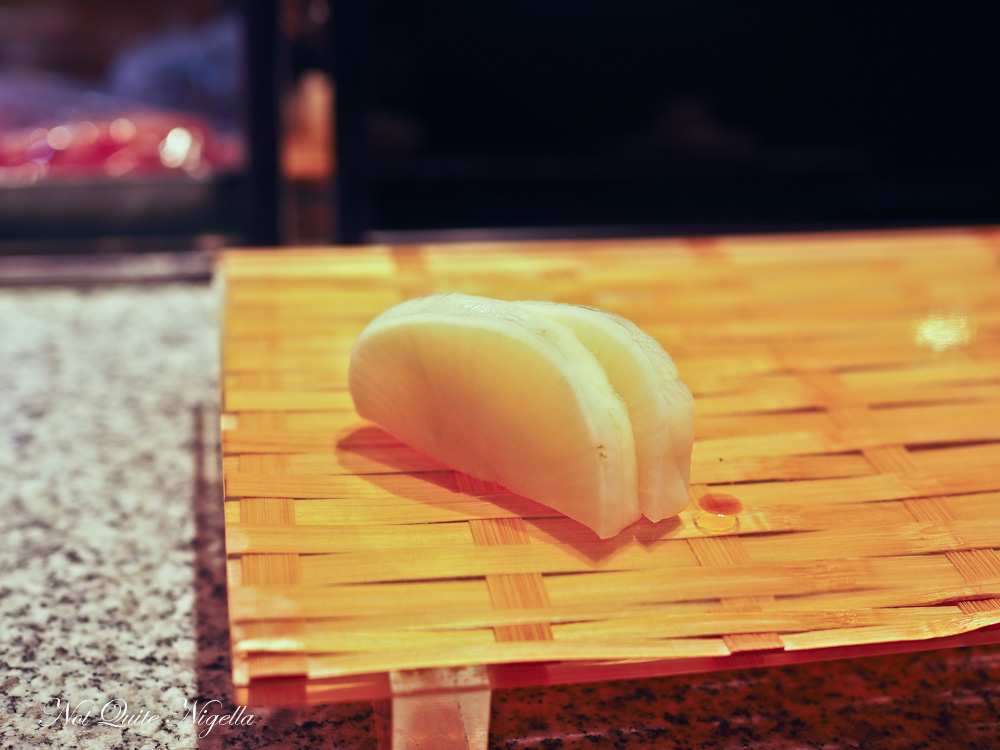 A last taste is a kuchinawoshi - a Japanese radish pickle, also known as a palate cleanser. Needed certainly because of the unctuous and silky course prior but also to appreciate the ebb and flow of flavours in Japanese cuisine.

So tell me Dear Reader, do you like Japanese sweets? And do you think that what an animal is fed makes a difference to how they taste? And do you eat sushi with your hands?

NQN travelled to Japan as a guest of the JNTO (Japan National Touris Organisation) but all opinions remain her own. 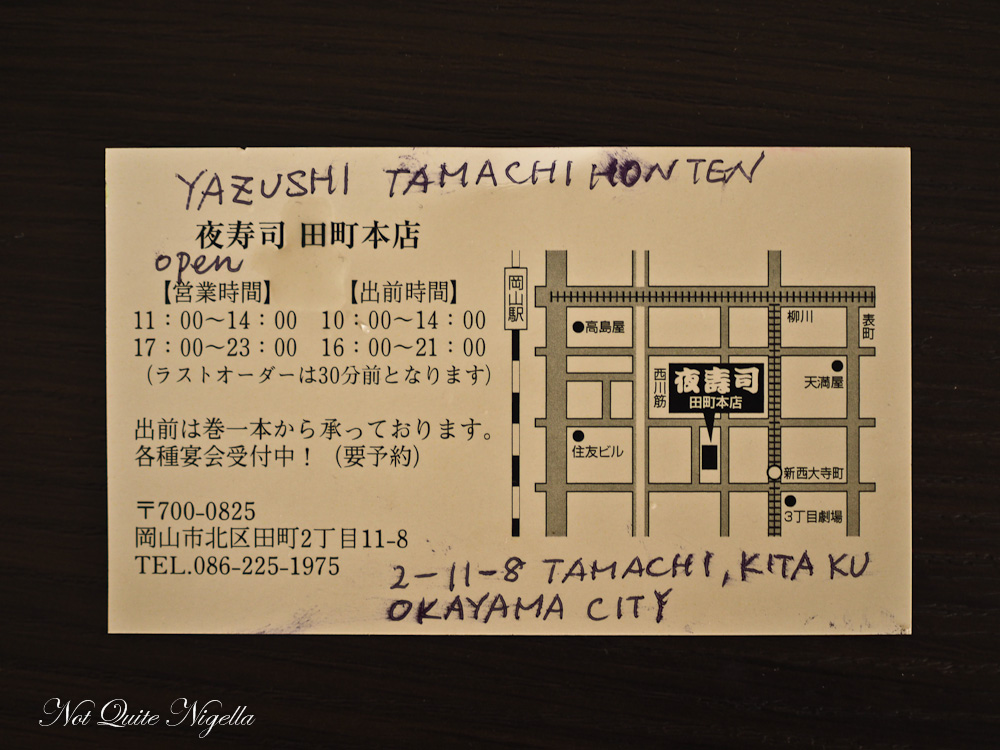