5 Foods That The Japanese Have Perfected!

Confession time: I am an avid Japanophile. Japan is a country that invents a lot but it is also a country that and refines and perfects concepts. Think electronics, cars and food. And on our recent trip we discovered that they had indeed perfected already popular items like French toast, soft serve, fruit, pastry and beef but with their very own twist. White strawberry or olive beef anyone? 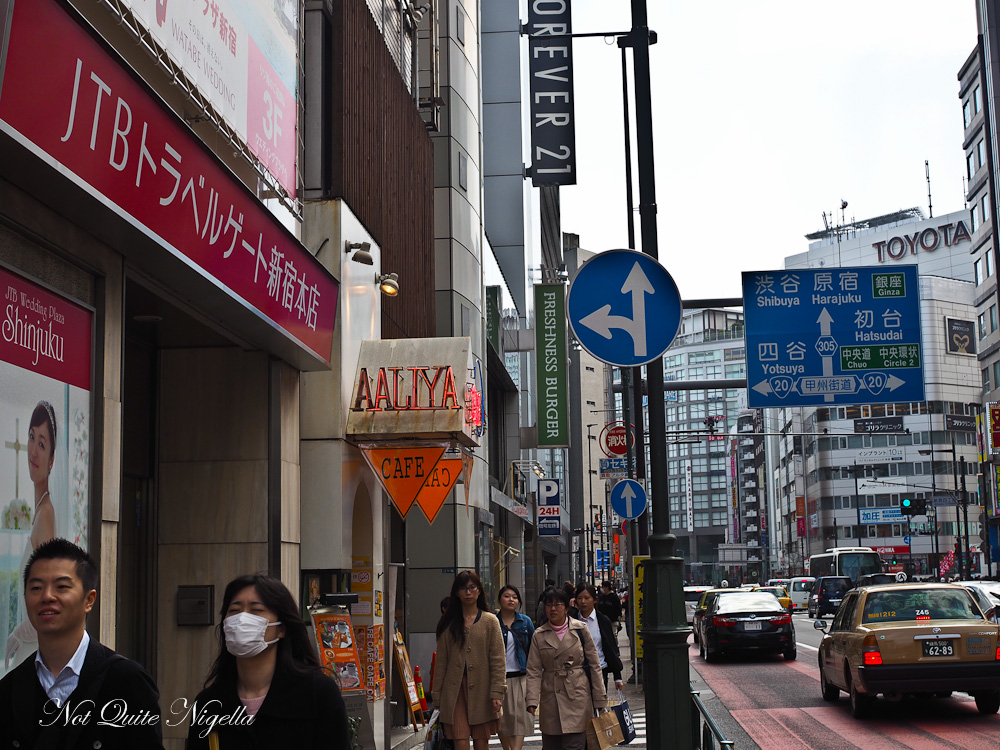 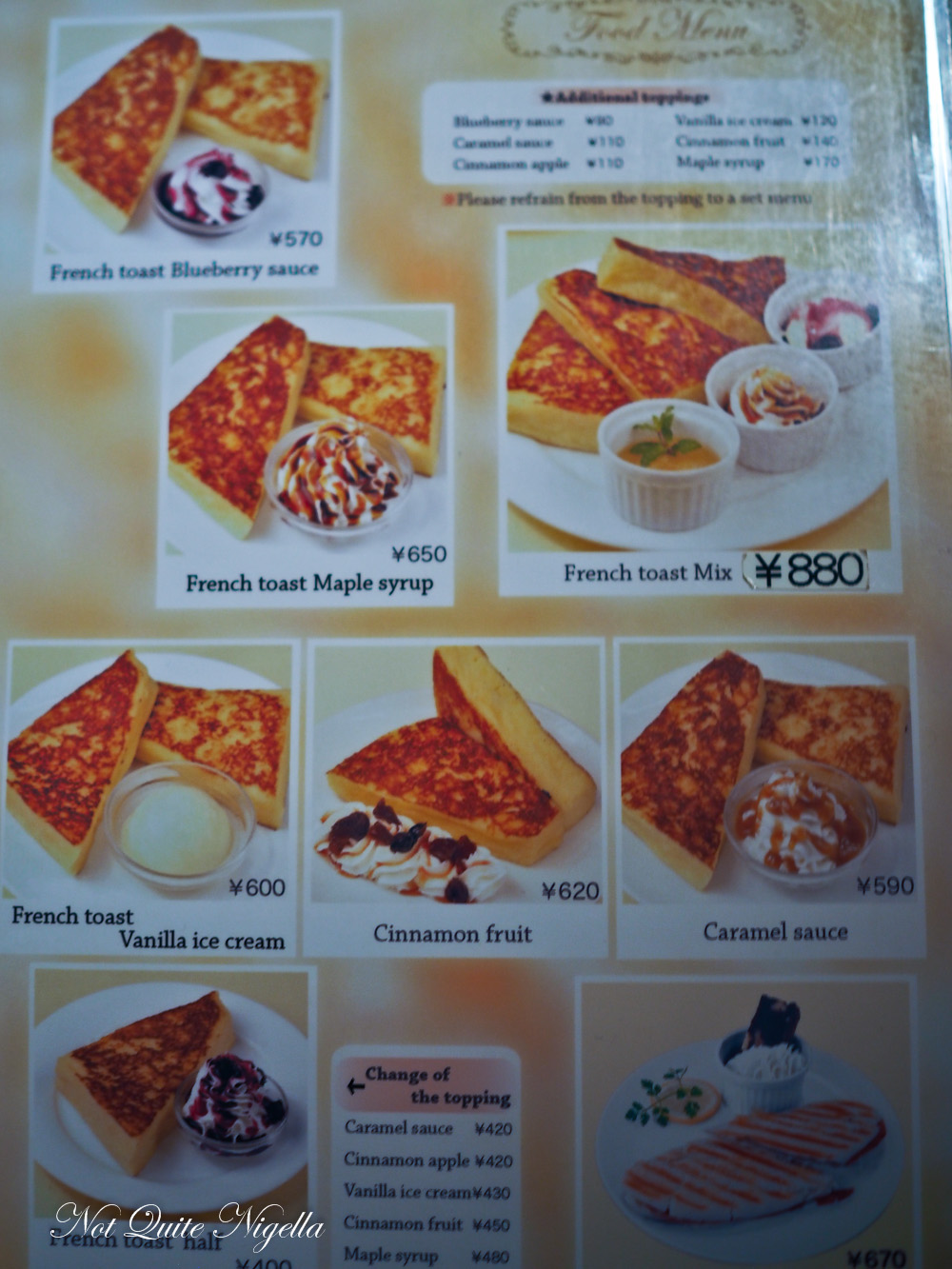 The signage is subtle, at night the neon light sign stands out a bit more. The lines may snake all the way up the stairs too and once you get in you can watch a man flipping French toast from an enormous grill. It's pretty cramped and tiny with small tables and lots of women inside-sure there's the occasion man but he's on a date. 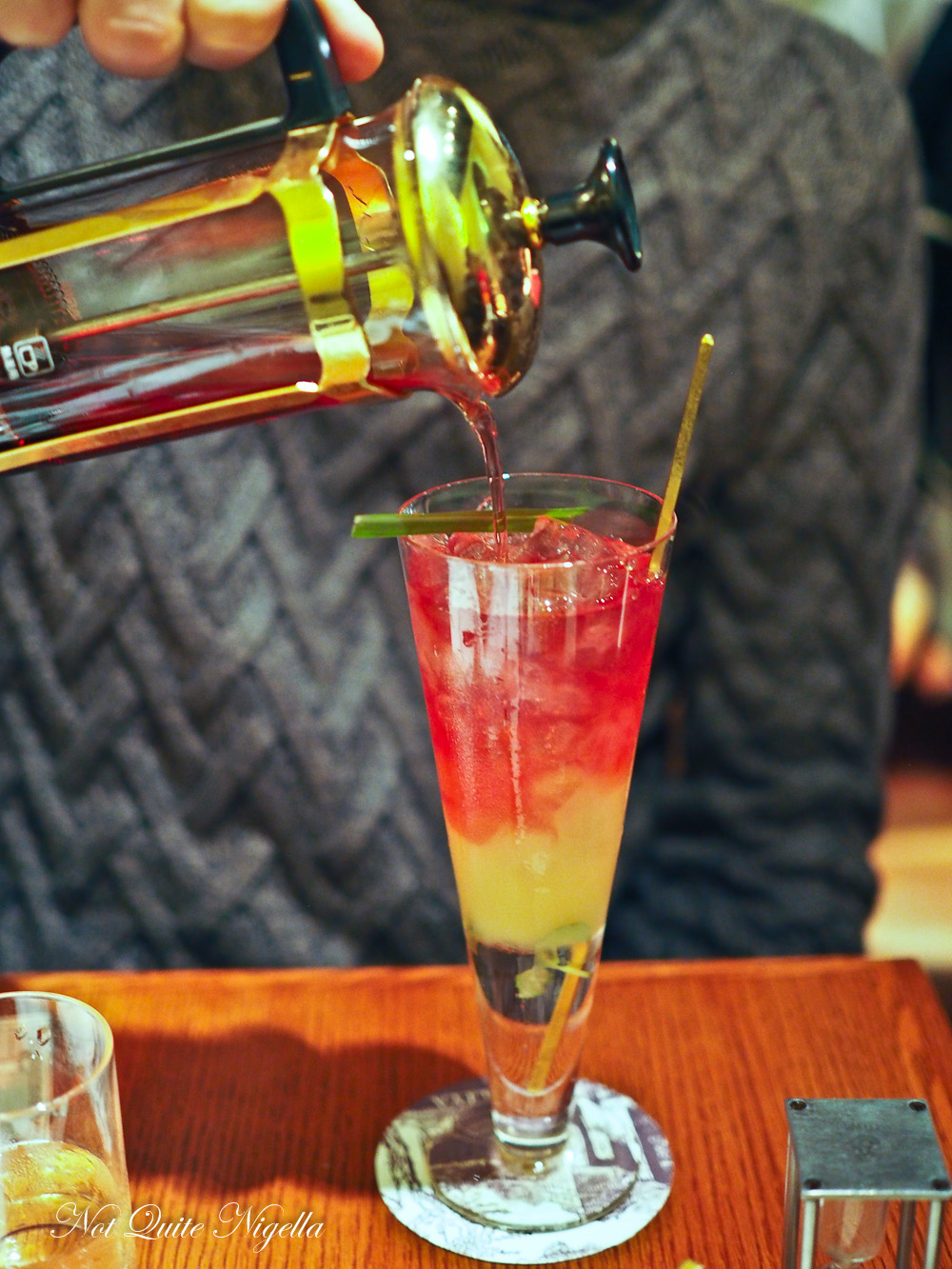 The menu is pretty much built on their famous French toast plus a salad or panini and drinks. The latter are on the expensive side with the drinks around the Y800 mark. They are good though and the Siberian iced tea with grapefruit juice has an appealing tartness and sweetness. Perfect for the French toast. 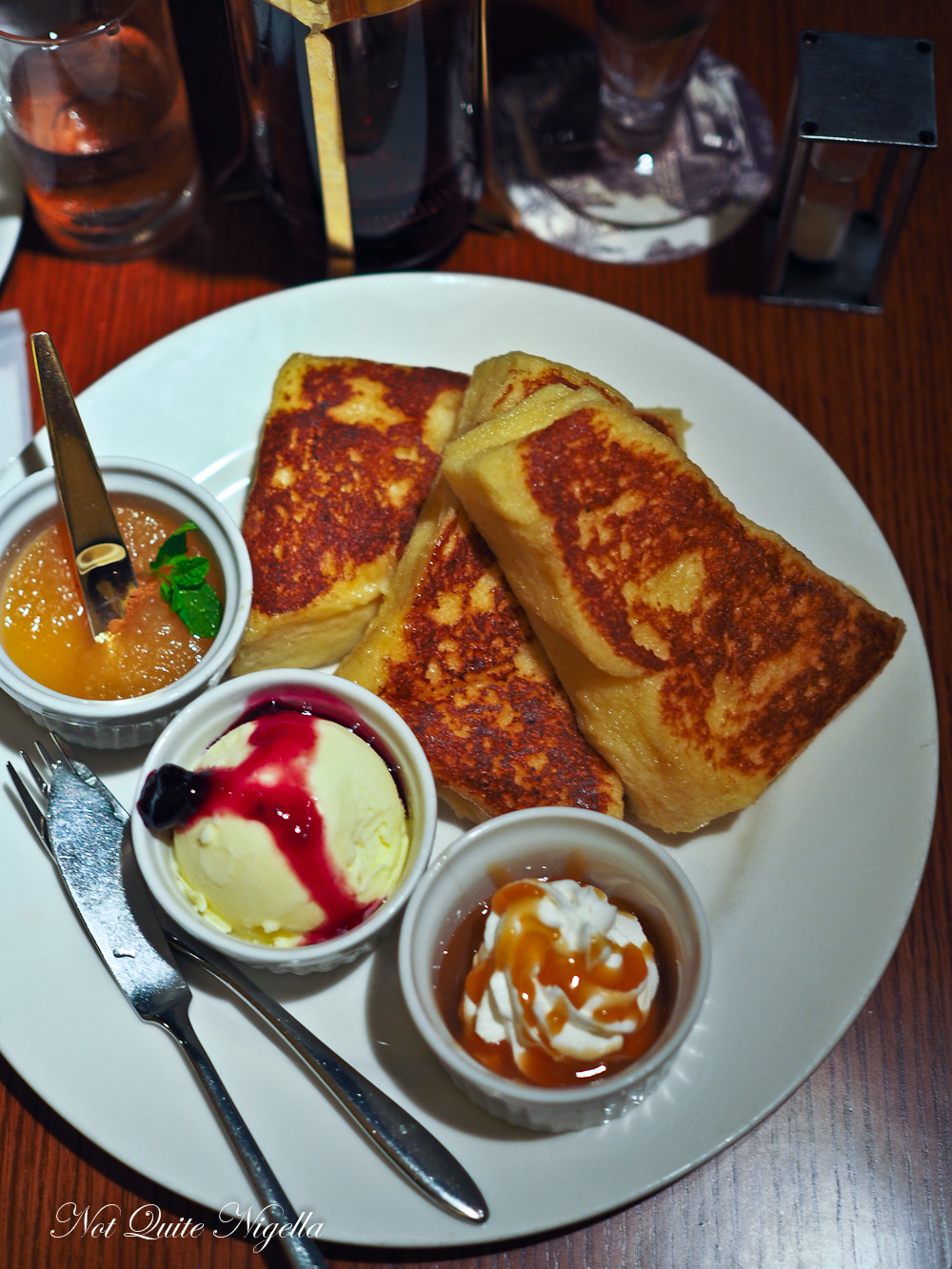 And then it arrives: the taster plate with three toppings: caramel whipped cream, vanilla ice cream with blueberry sauce and cinnamon apples. And the French toast comes with just a fork and a butter knife because that's their way of telling you that it's so soft that you don't need a knife. It's beautifully soft and milky eggy but never eggy in aroma. I am pretty sure that almost everyone that has tried this takes a peek inside to see if there is any bread in there (there is, it's that milky white soft loaf). It's just pure pleasure eating this French toast and after eating it, I decide to devote my life to trying to find how to make this. How very Japanese! I'm glad to say that the recipe for Cafe Aaliyah's copycat French Toast is here. 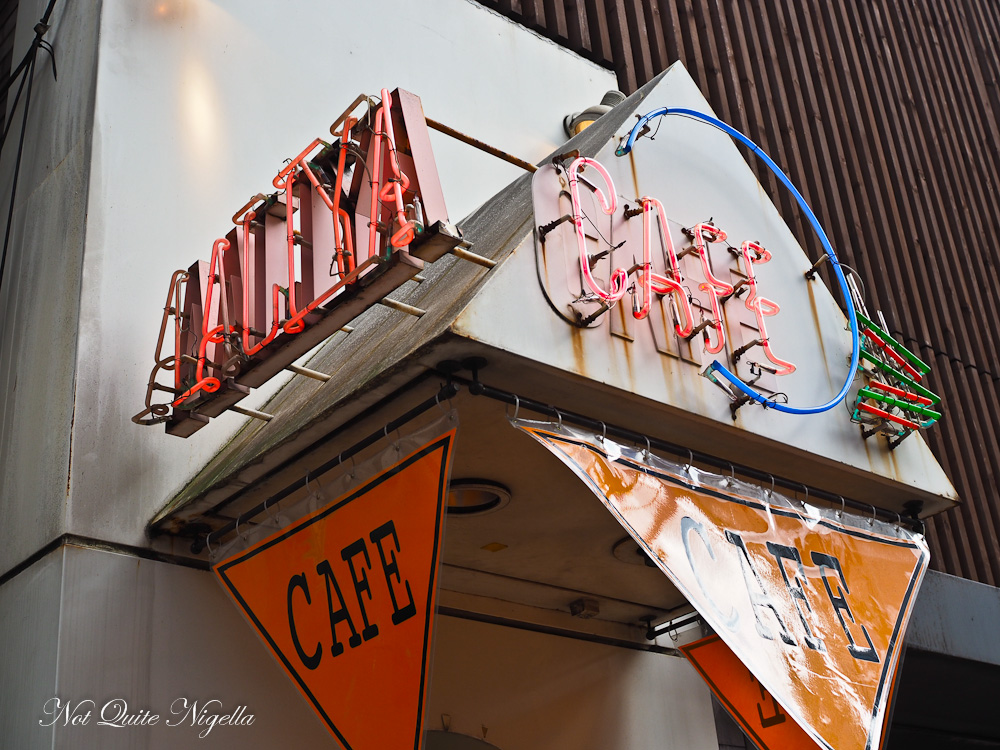 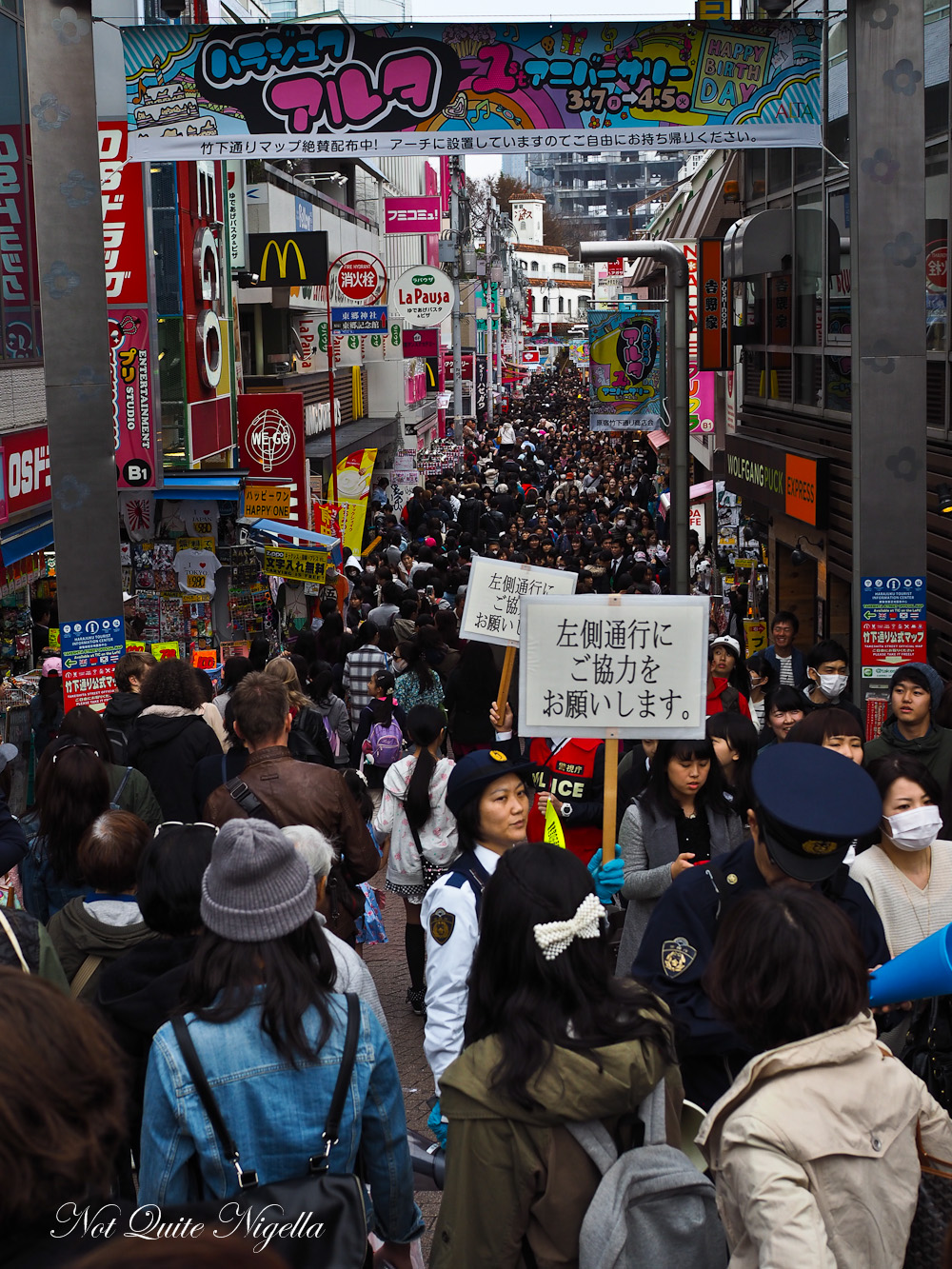 High end soft serve? That's exactly what the people at Nissei the Osaka based company were thinking of when they developed Cremia soft serve. The Sisters chain that sells this is otherwise known for their pearl tea but this very milky and creamy soft serve is so different from others you may have tried. It is also available at other places all over Japan. 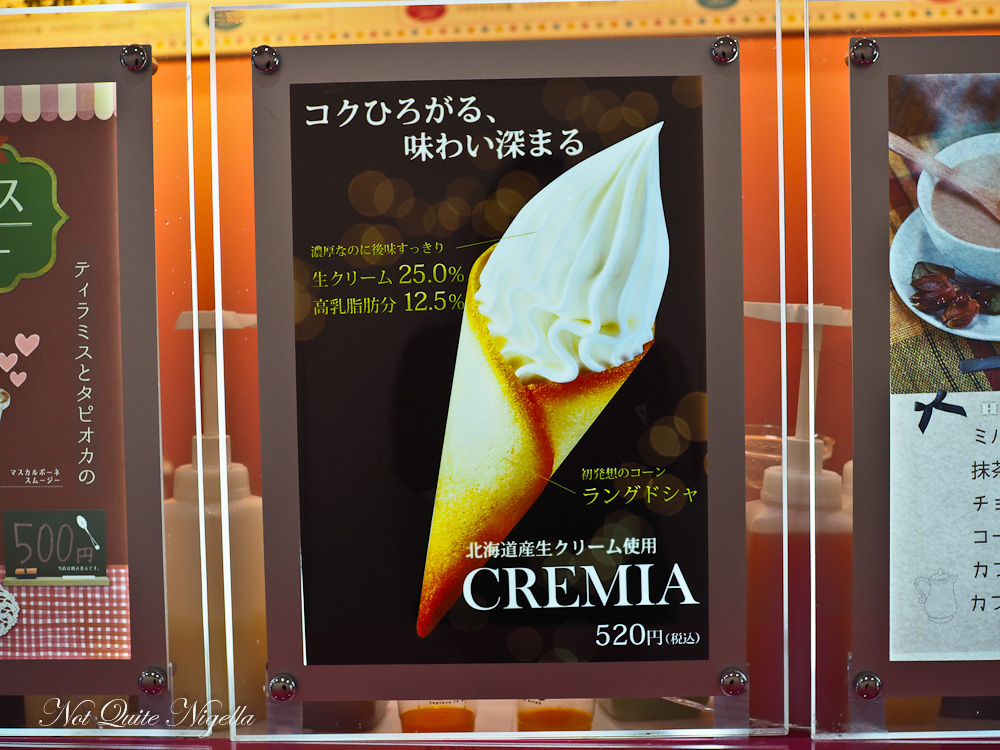 It starts with the ingredients: Hokkaido milk. The dairy from Hokkaido is prized and in the Cremia they use 12.5% specially selected Hokkaido milk and 25% whipping cream. The taste? Well the flavour is intensely milky-the first thing I am reminded of is powdered or even condensed milk but without the grain. It's also very creamy. It is a small serve and at Y520 a cone it isn't cheap but it comes in a langue de chat (cat's tongue biscuit) cone. 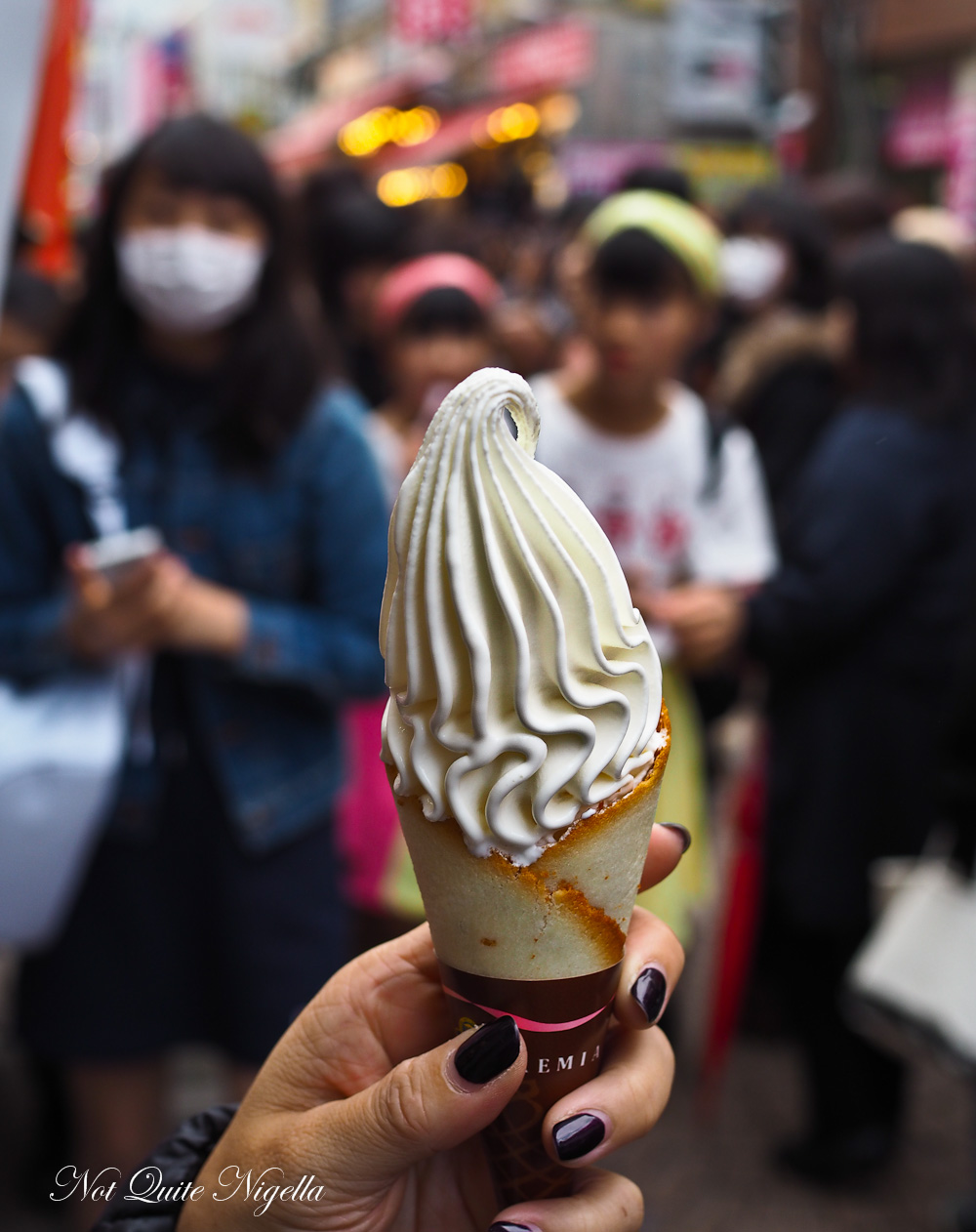 You can sit down in Silkream in Shibuya for a dessert plate with fruit or crepes all featuring this unique soft serve (just don't take the surprisingly rude service personally). 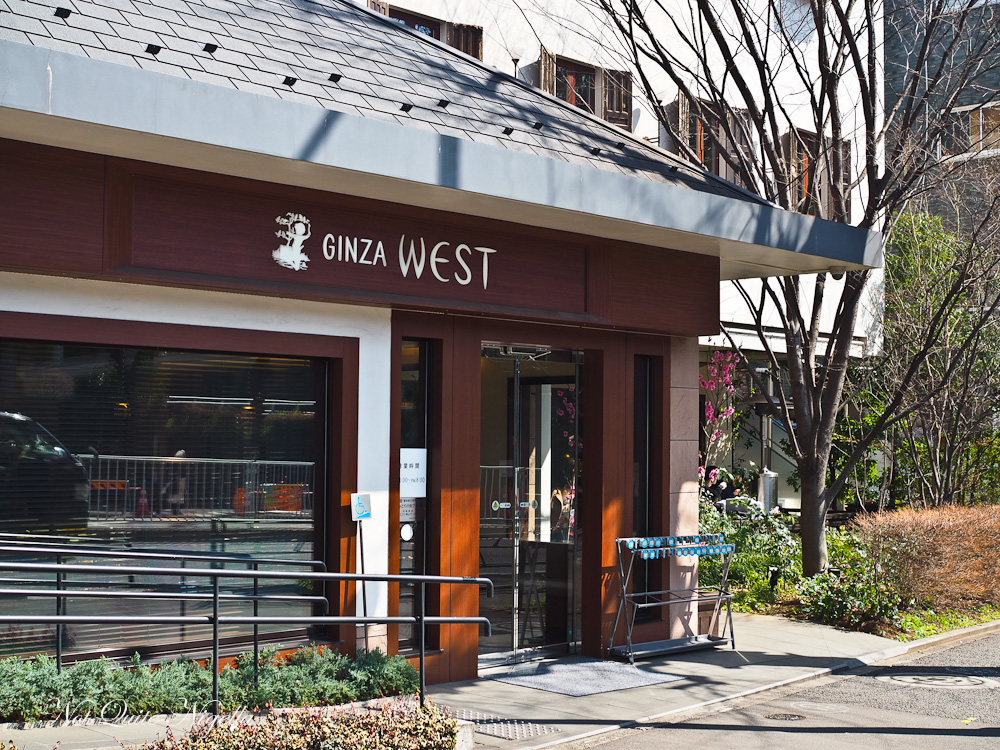 They were the pancakes that won Instagram. Unbelievably thick, outrageously so they wobbled and has a surface as smooth as an Instagram goddess's filtered buttocks. "We're going for the Kimmy K pancakes today!" I told Mr NQN who just takes that sort of comment in his stride. "Okay," he said not asking what Kim Kardashian was doing making pancakes in Tokyo. He only recently found out who she was.

The pancakes are found at one location: Ginza West (formerly known as Confectionery West) at Aoyama Garden, opposite the Aoyama Cemetery. This is Ginza territory so things are a bit more rarefied and expensive here. Classical music plays in the tea house and you can sit inside or out (smoking is outside). We put our names down and wait. It takes about half an hour before we are ushered into the tea room with Scandinavian style chairs and expensive looking business people doing business over coffee. 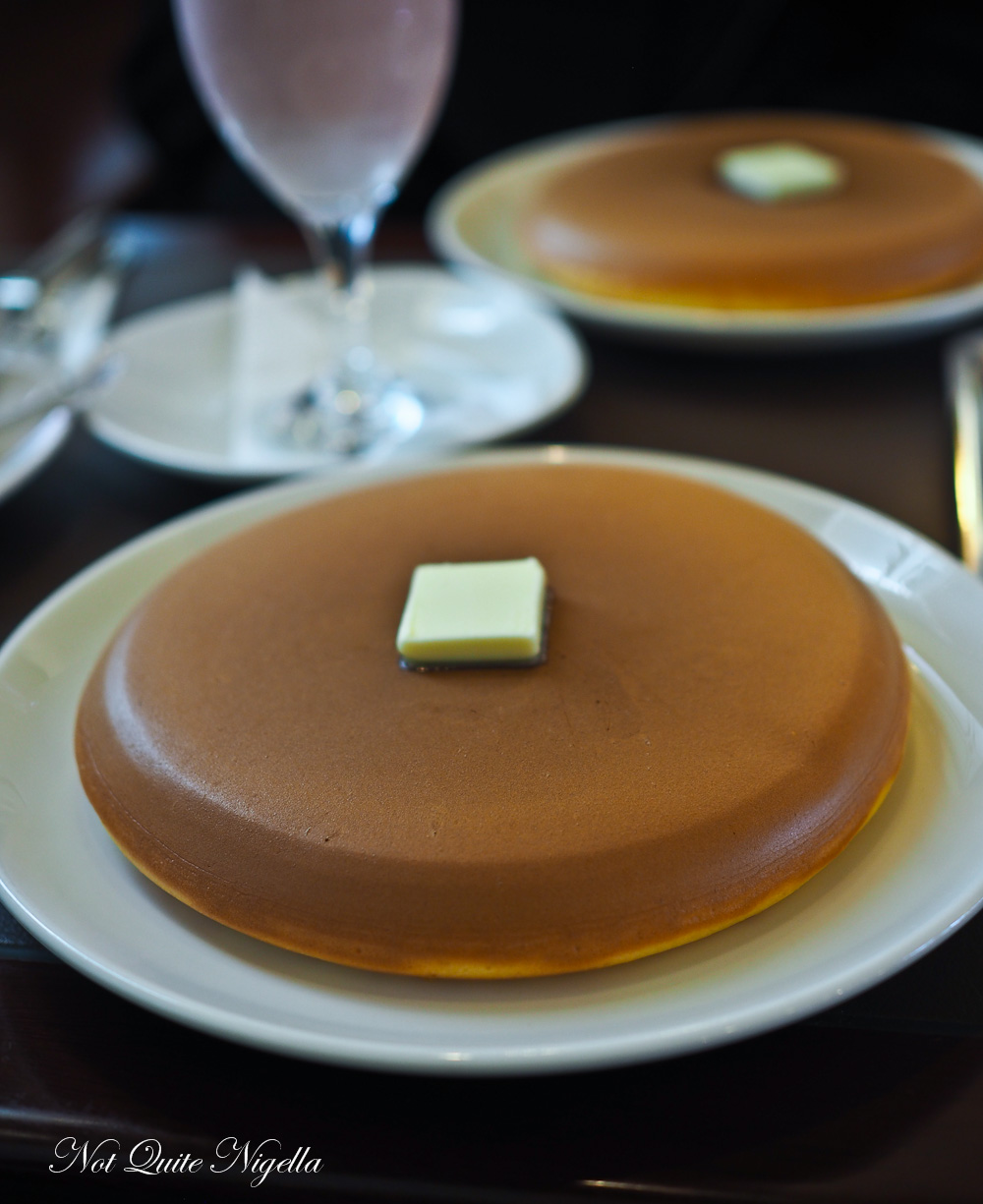 The menu is made up of sandwiches, soup and cafe style drinks. The drinks are on the expensive side-around Y1100 per drink or around $13 but that seems to be par for the course in Ginza. I joke with Mr NQN that Ginza West is the name of Kim and Kanye's third child. He has no idea that they had kids.

We order a double stack of pancakes and it takes a while (around 20 minutes) and they kindly separate it into two while just charging us for the double. These are thick and smooth and I stare at it for a moment in wonder at the airbrushed look of the smooth surface. It comes with a single square of butter, not exactly enough but I'm just being greedy. There is also a small jug of maple syrup. It isn't enough for one pancake let along two and another request has them bring another jug, bigger this time. 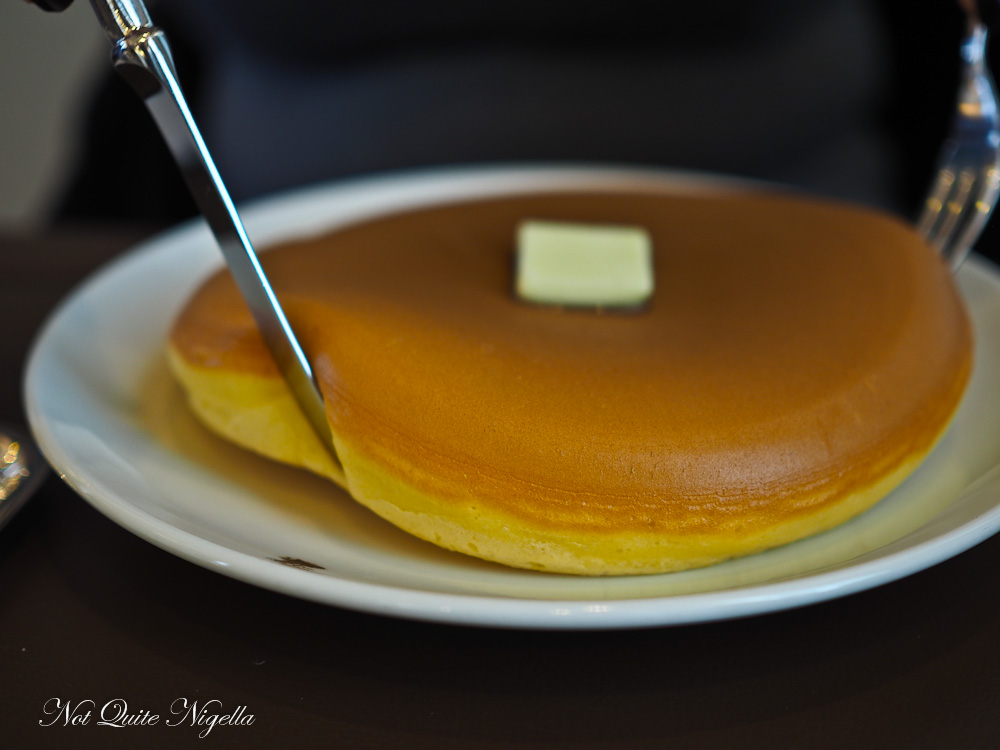 Although I was famished by the time the pancake came I couldn't finish a whole one. It was worth it for the humour factor (well I found it perfectly funny, Mr NQN didn't quite get why I giggling while I was jiggling them). Especially when I would sing along quietly to Bound 2 while jiggling them. Maybe you had to be there...or maybe not. 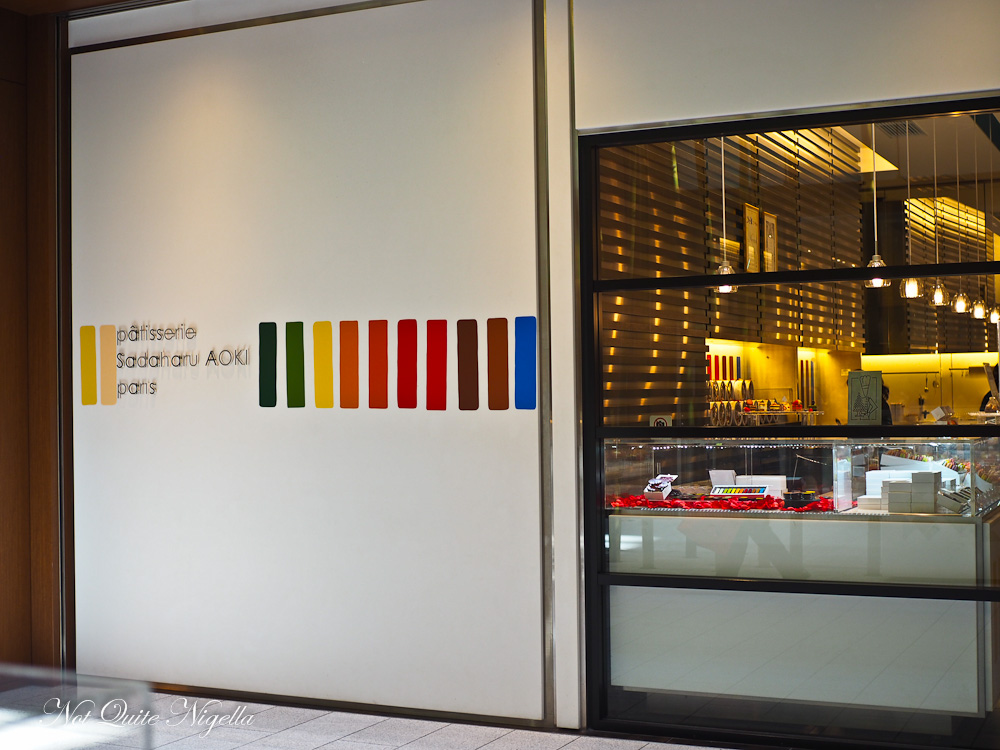 Some say that the Japanese do the best French patisserie in the world (which no doubt displeases the French). The most famous Japanese patissier is Sadaharu Aoki who has four branches in Tokyo and four in Paris. He specialises in French technique with Japanese ingredients. 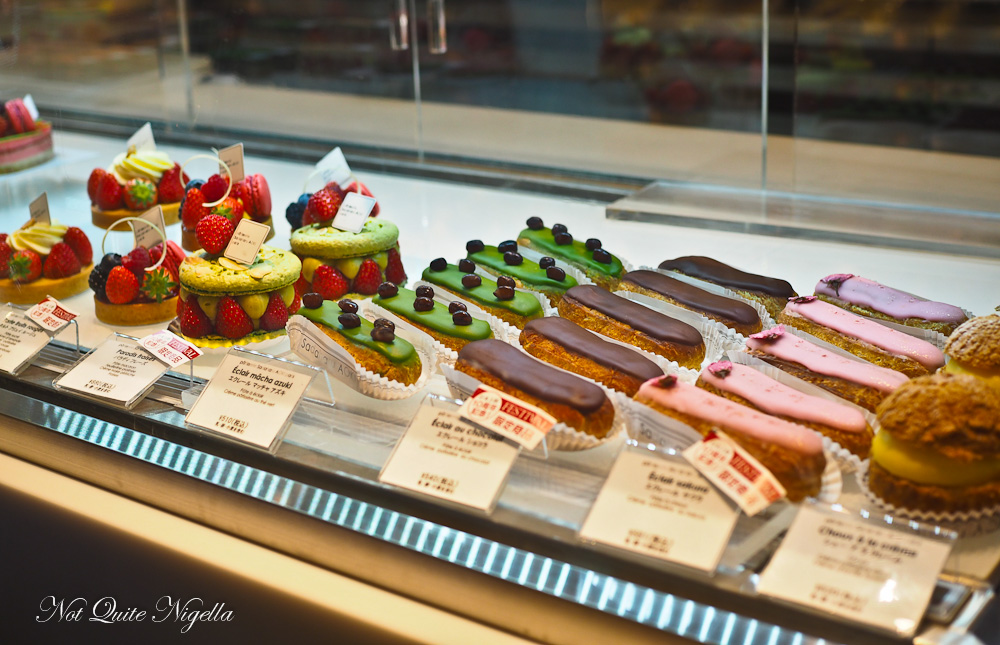 As it is cherry blossom season there is a sakura eclair on offer. It's stunning and perfectly crisp eclair is filled with creme patissiere and topped with a cherry blossom flower and pale pink fondant. 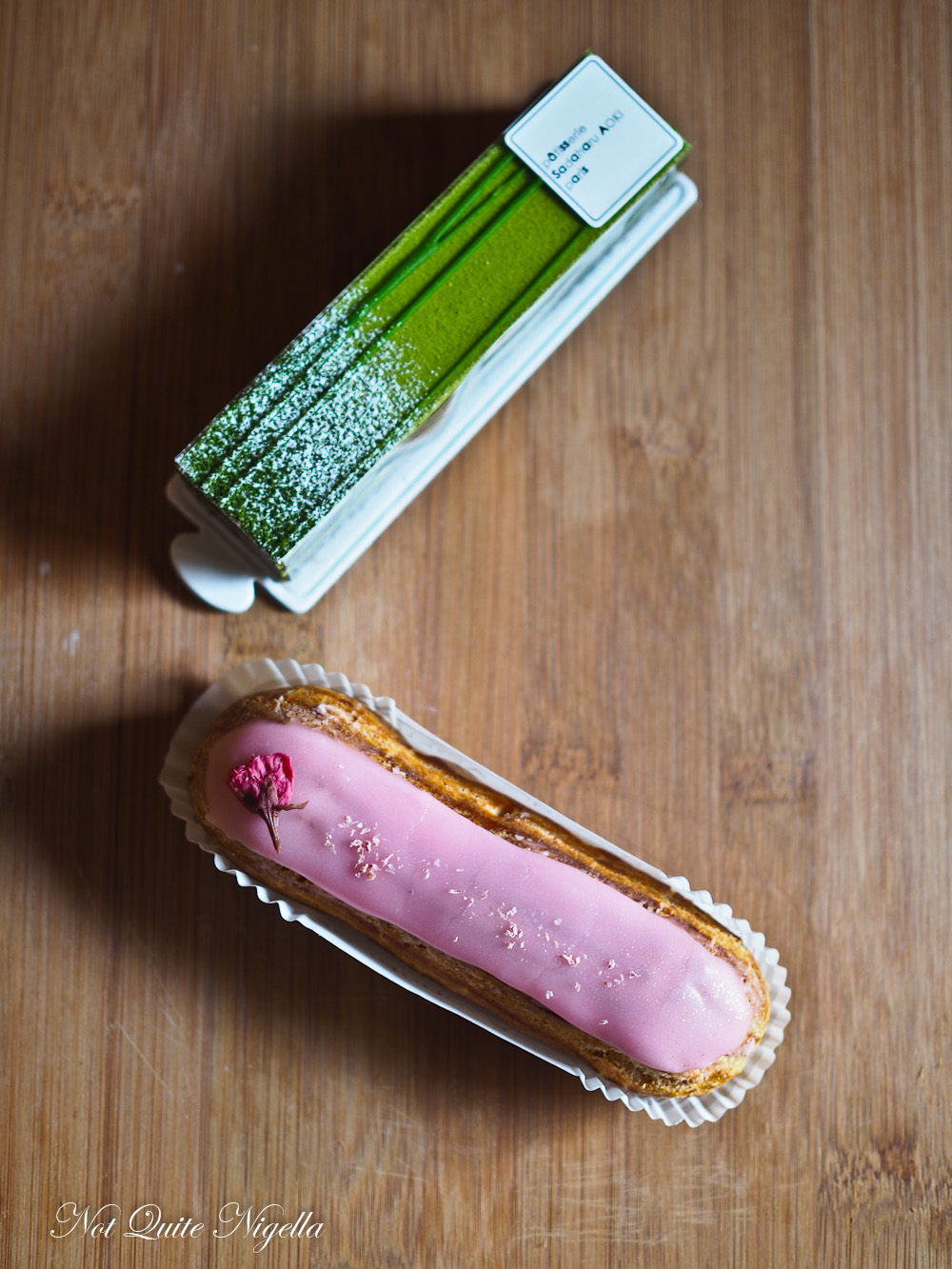 The Bamboo is perhaps one of his most famous cakes and is an ode to perfect balancing of flavours. There is matcha and dark chocolate but the interplay between the two flavours is exquisite. 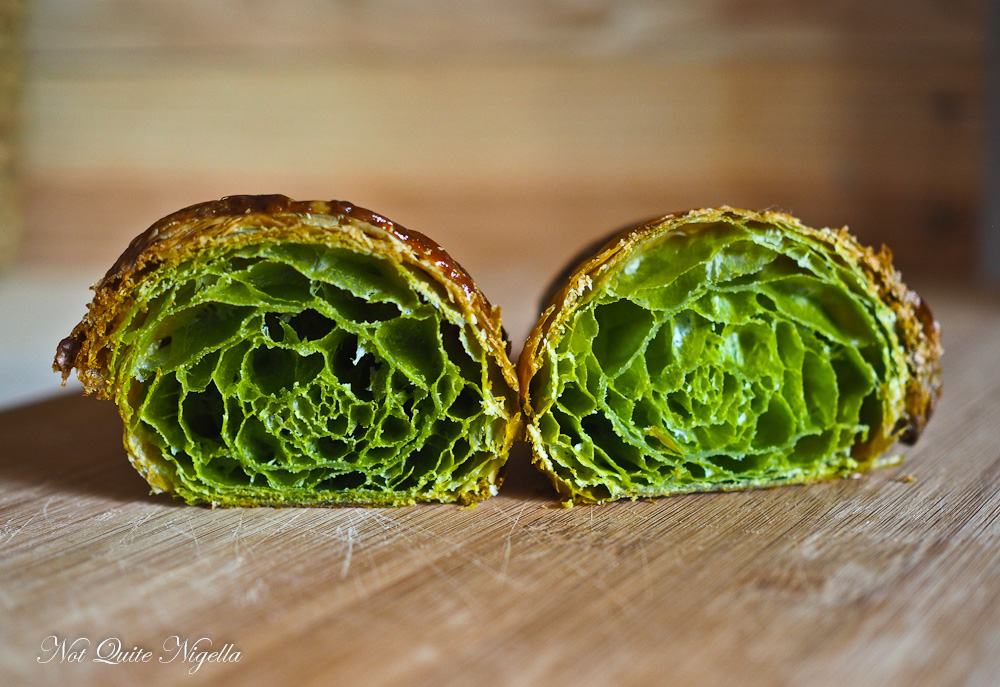 And the money shot is really about the matcha croissant. At Y530 it is absolutely worth every yen because it's all about precision here. Cut one open and admire the honeycomb pattern and then sink your teeth into this crisp pastry. And then buy another to eat on the flight home.

The Best (and most expensive) Strawberries 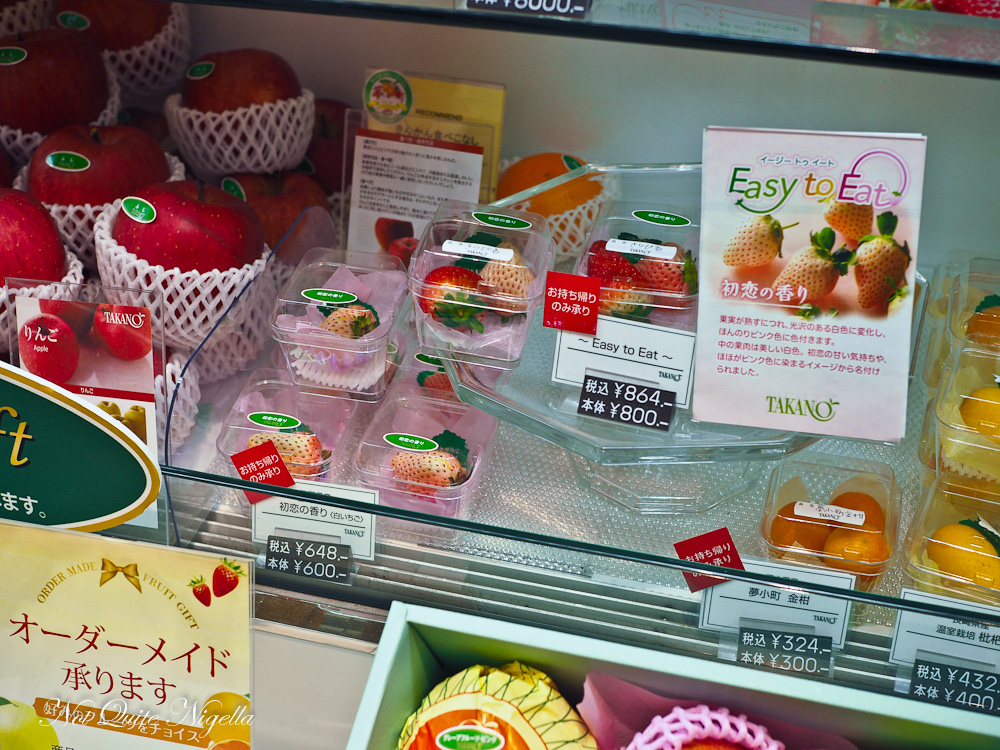 I remember when I first arrived in Tokyo and would scour the food floors of department stores taking in all of the produce. Sights like a rockmelon around $100AUD were not uncommon. I then heard about a type of white strawberry that was in season but it was like searching for a unicorn. I called up half a dozen stores to see if they had them in stock only to be told that there were red queen strawberries and other varieties but not white.

White strawberries look unripe but they're actually a ripe strawberry created from cross breeding. Also called pineberries they have an almost slight sherbetty taste to them. And in Japan they dub them "Scent of First Love" or Hatsukoi no kaori. 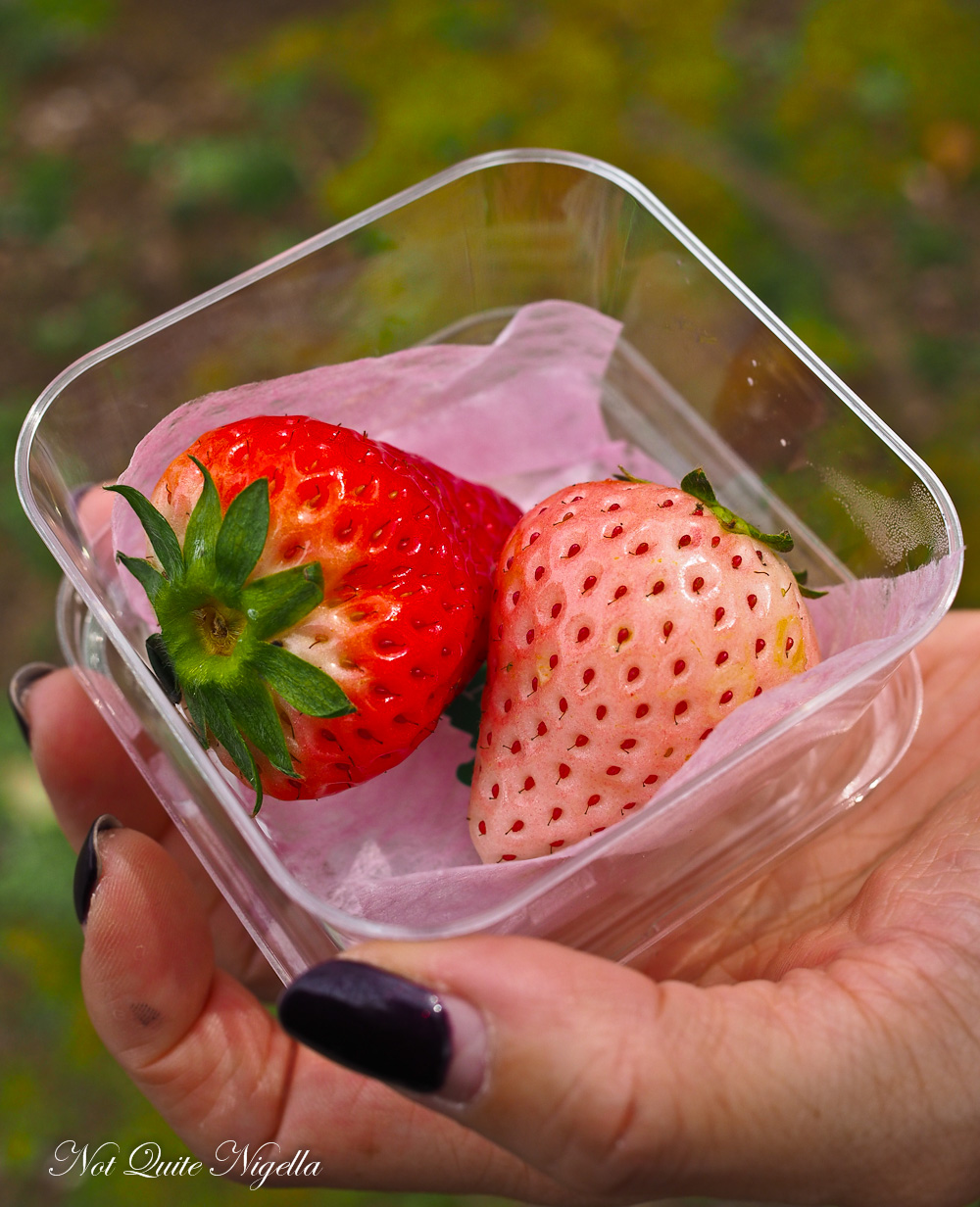 And then it was our last day in Tokyo before we were to fly out that evening. Walking through Ueno to lunch I spotted a fruit store. We literally had two minutes spare before our lunch booking so I ducked in. And there they were: white strawberries. You could buy one for Y648 or one smaller white and one red for Y864. These strawberries are packaged up in a box lined with foam and paper and then a bag and another bag. 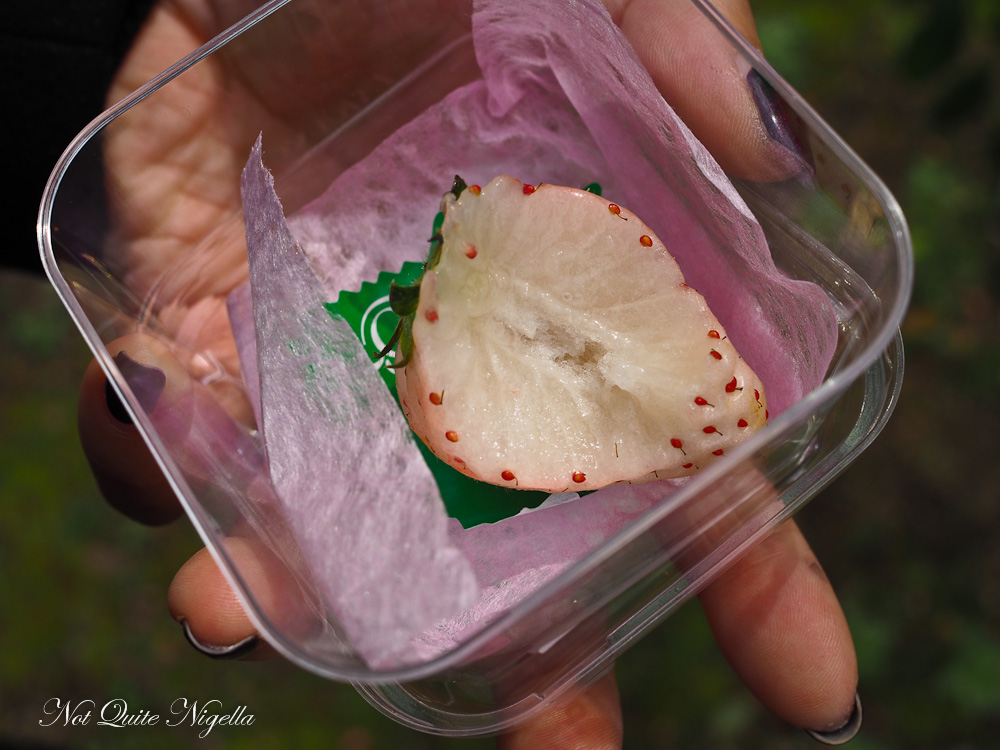 We share each strawberry. The white strawberry is completely white to the very centre and the red seeds are dark in colour. The strawberries are juicy and sweet-invariably all Japanese fruit is beautifully sweet so this was no surprise. The white strawberry has an almost sherbetty taste-some compare it to a pineapple. I almost wish I could settle in and bake a cake or tart and cover it with these pretty berries. And then I did the Maths ;) 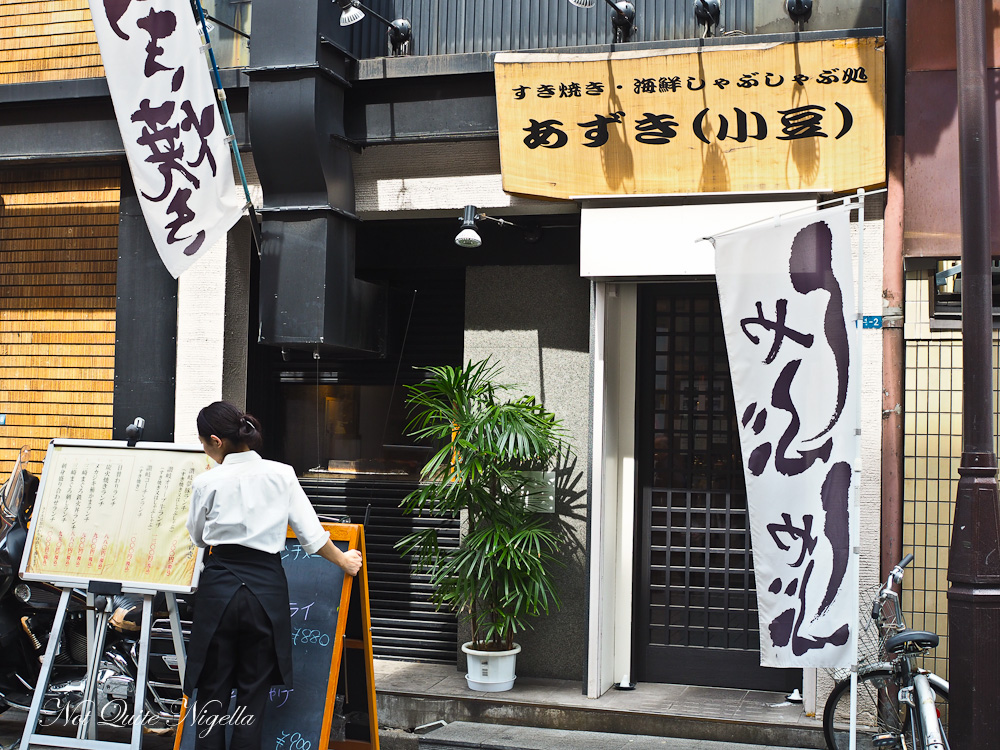 One of the most recent trends in beef or wagyu to come out of Japan is Olive Beef or Olive Gyu. It is a product that mainly comes from the warm Mediterranean style climate of Shodo Island where they grow olives. Here they feed cattle with dried powdered olives. It's a by product of olive oil production. The olives need to be dried and powdered as this reduces the bitterness of the olives. It it said to have a big effect on the meat lowering the melting temperature so that it melts if pressed against skin. It is said to be so sensitive that handling it too much with hands can be detrimental to the meat. 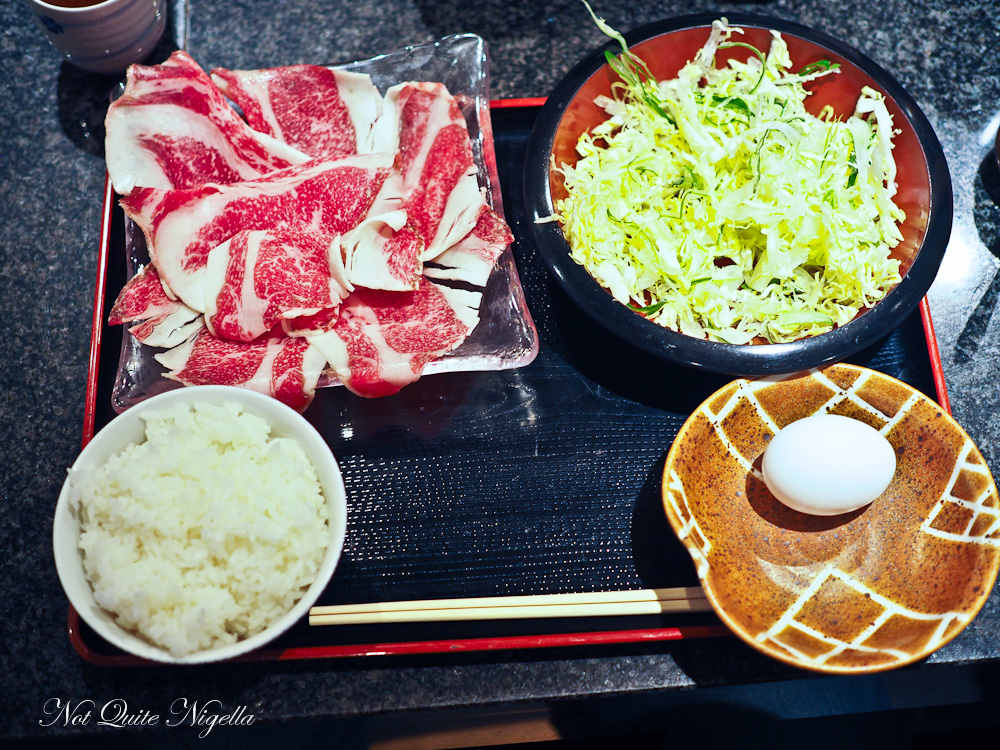 So where can you eat this beef? it's hard to find in Tokyo with only a small handful of restaurants serving it. One restaurant is Azuki in Ueno. Service can be a bit strange from the chefs (welcoming is not a word I would use unlike everywhere else in Tokyo). But at lunch you can have a very well priced meal (Y2500 for two people!) of shabu shabu or sukiyaki with 130grams of olive gyu or olive wagyu. Around dinner time it can be cost around Y8000 but this also includes sashimi. 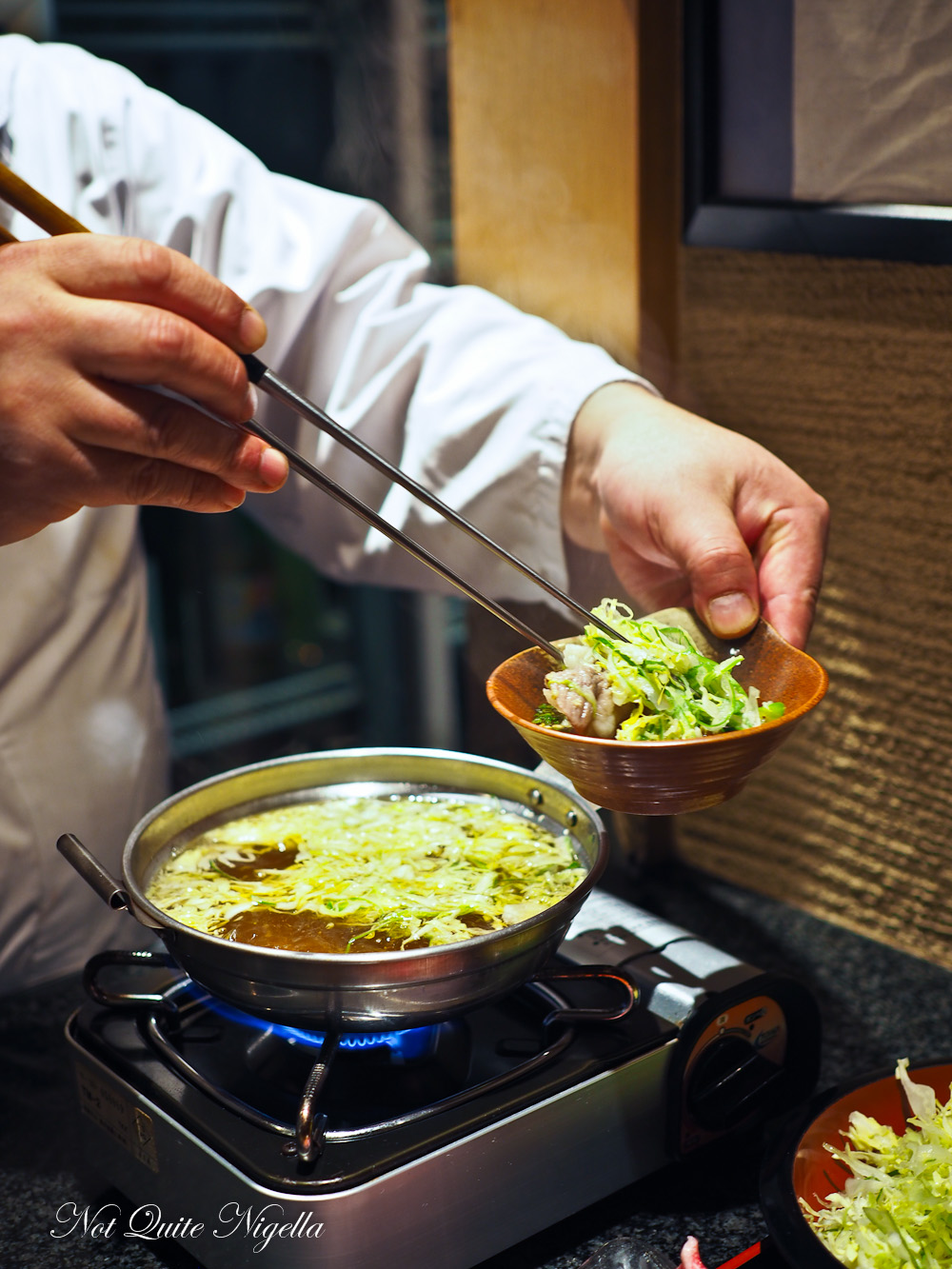 Shabu shabu and sukiyaki are similar concepts in that they're cooked by the customers over gas flames at the table. You add in half the cabbage, wait for the dashi broth to heat back up to boiling and then add a piece of olive wagyu to the broth turning it for a total of 30 seconds or until the beef is cooked. You place the cabbage and beef in one of the sauces Shabu shabu comes with two sauces: a piquant vinegary sauce and a sesame based sauce. The sukiyaki is really more to my taste and the beef and vegetables are dipped in a freshly cracked beaten egg. Adding the spicy miso paste to the rice provided gives a very satisying meal.

So tell me Dear Reader, have you ever tried any of these items? Which one interested you the most? Would you pay $10 for two strawberries? 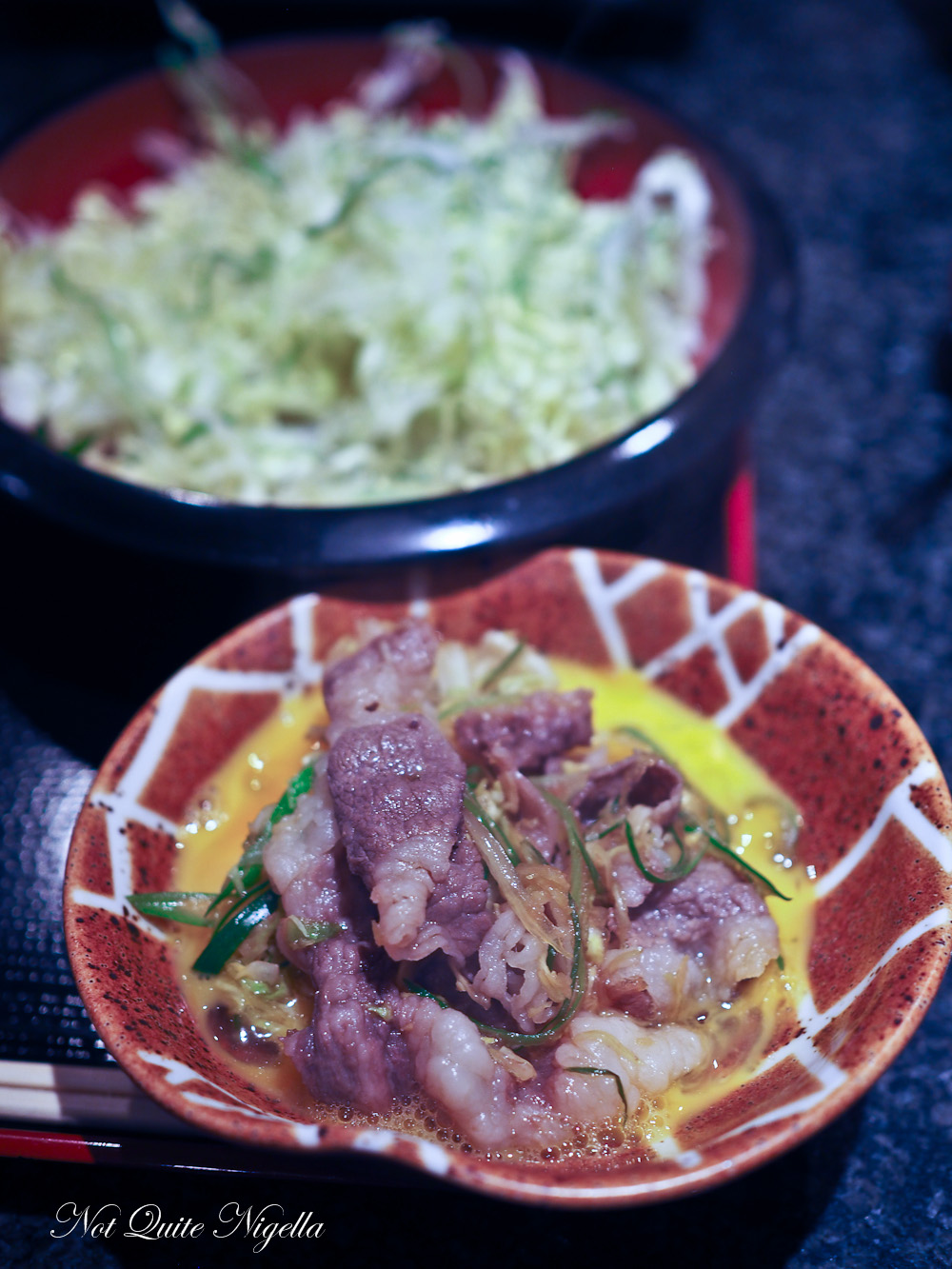 NQN travelled to Japan as a guest of the JNTO (Japan National Tourism Organisation) but all meals in this post were independently paid for.

Available all over Japan. We bought ours at Sisters on Takeshita Dori in Harajuku, the busy street with lots of shops that is very crowded. Takeshita Dori is opposite the exit of Harajuku station and Sisters is about three quarters of the way down 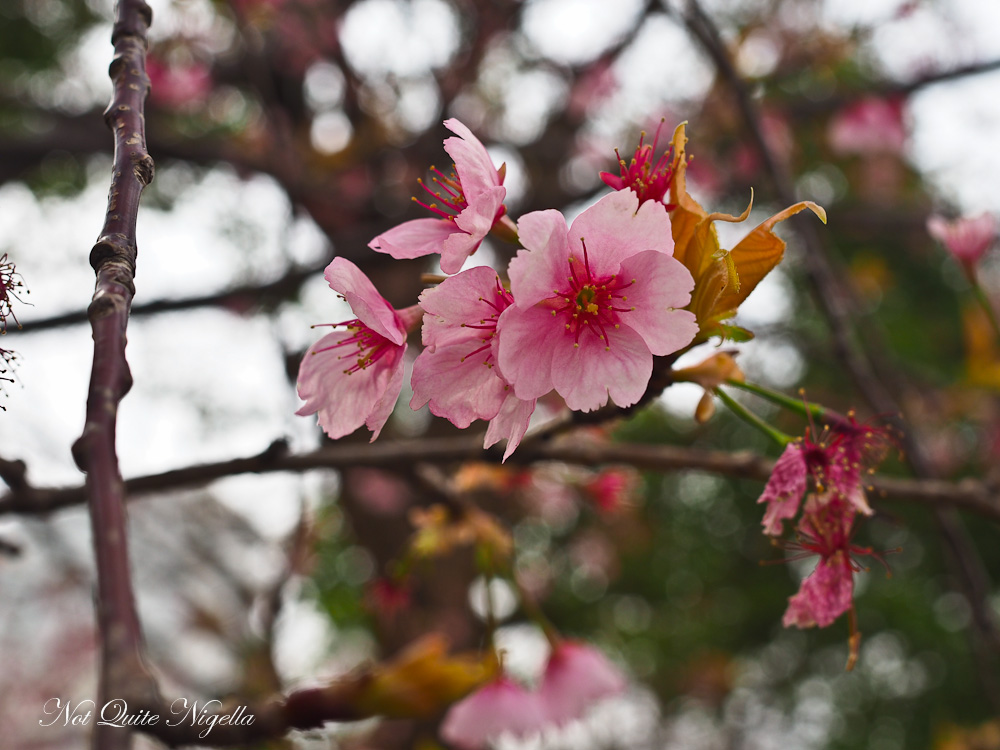