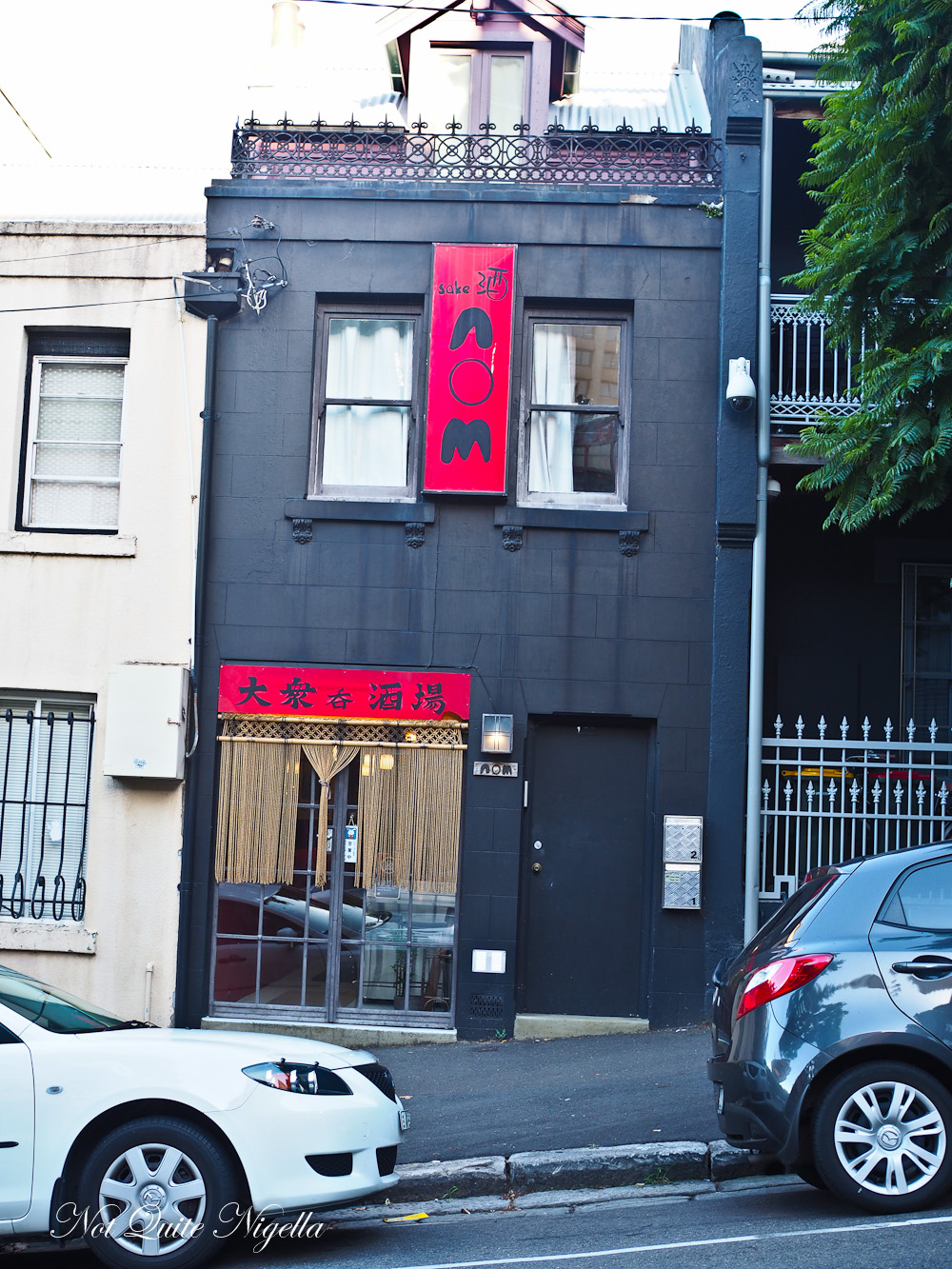 Nom is a very popular casual style Japan restaurant that is located on a quiet street of Darlinghurst. While it may lack a lavish fitout, the food speaks volumes. It's also a great spot for sake and a quick meal and pretty much anything that you pick will be satisfying and delicious. Just make sure to order a couple of their signature mentai potato salads!

The date was made for dinner before we even had chosen a spot. Pressed for time JY aka the Black Widow and I put in a date and then surveyed each other's "to eat" lists. "Let's go to Nom," said JY. Because it was during the Sydney heatwave week I knew that her reasons would have to do with air conditioning. Oh and Japanese food. 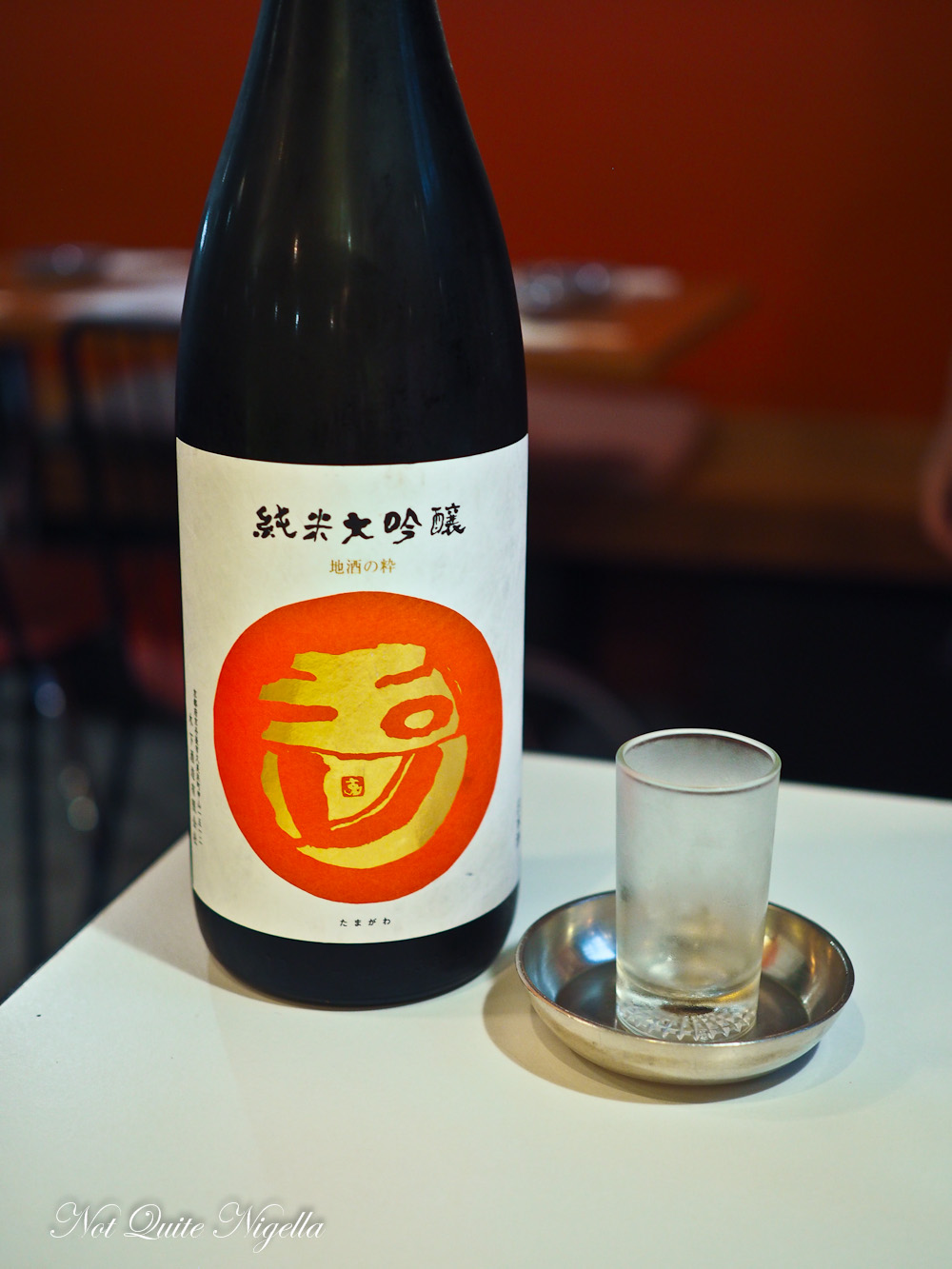 Nom is situated at the top of Riley Street, near Oxford Street in Darlinghurst. It's a cute little place, not ultra sleek or glamorous but a cute and homely restaurant with friendly service and vintage framed pictures of Japanese women on the walls. It reminds me of nearby Yokozuna on Oxford Street that has now closed. Mr NQN is joining us, mainly for the same reasons (air conditioning, Japanese food). 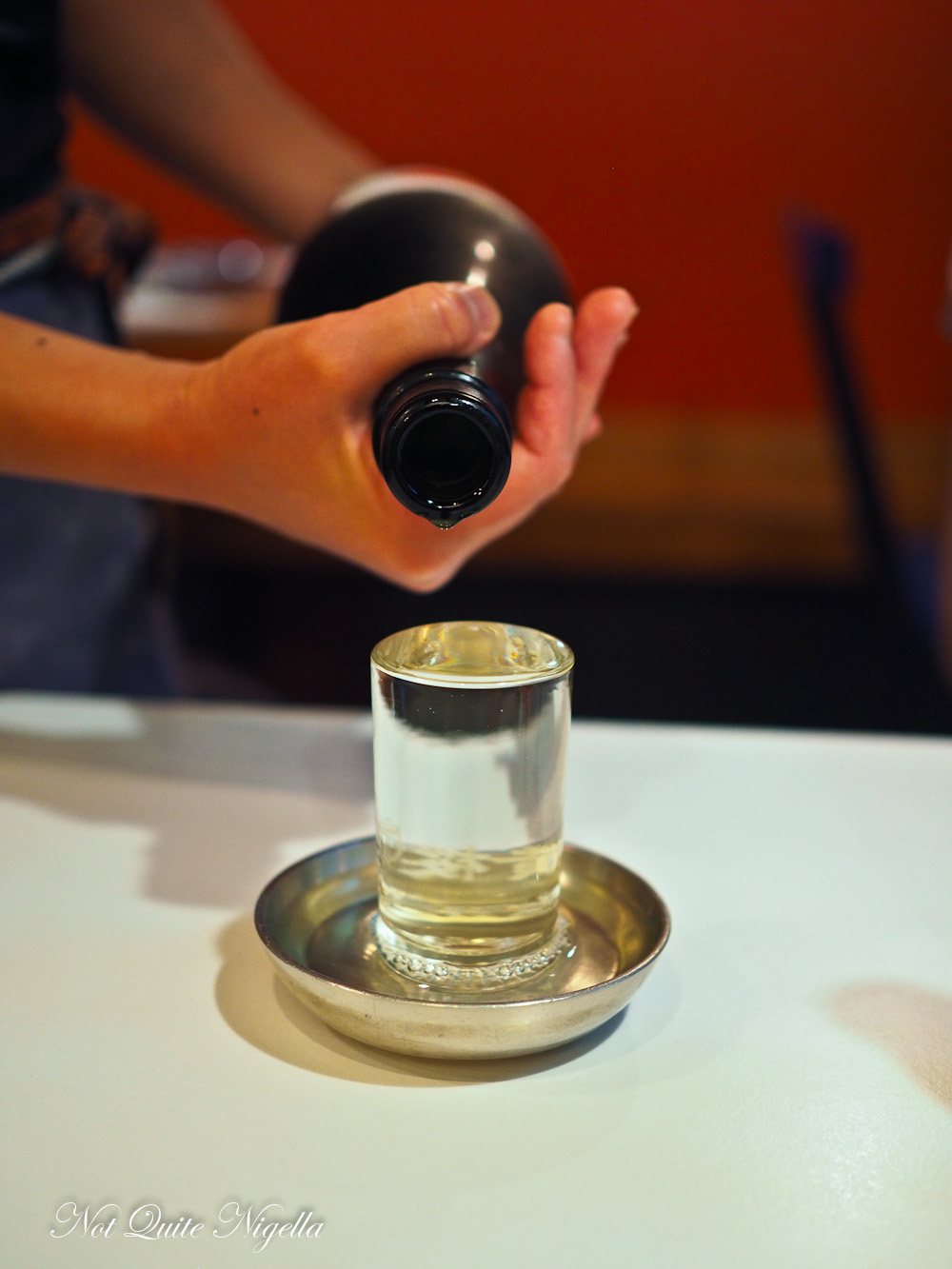 The hot weather outside prompts a suggestion from our waitress to try the sake. I'm usually rather ambivalent about the stuff but she recommends a Kyoto based sake by Tamagawa, a distillery established in 1842. She pours it into a glass sitting in a small bowl. She fills it to the top and then it overflows. I take a sip and my eyes widen. It's absolutely delicious, surprisingly sweet without any real burn and really changes my compass about sake. 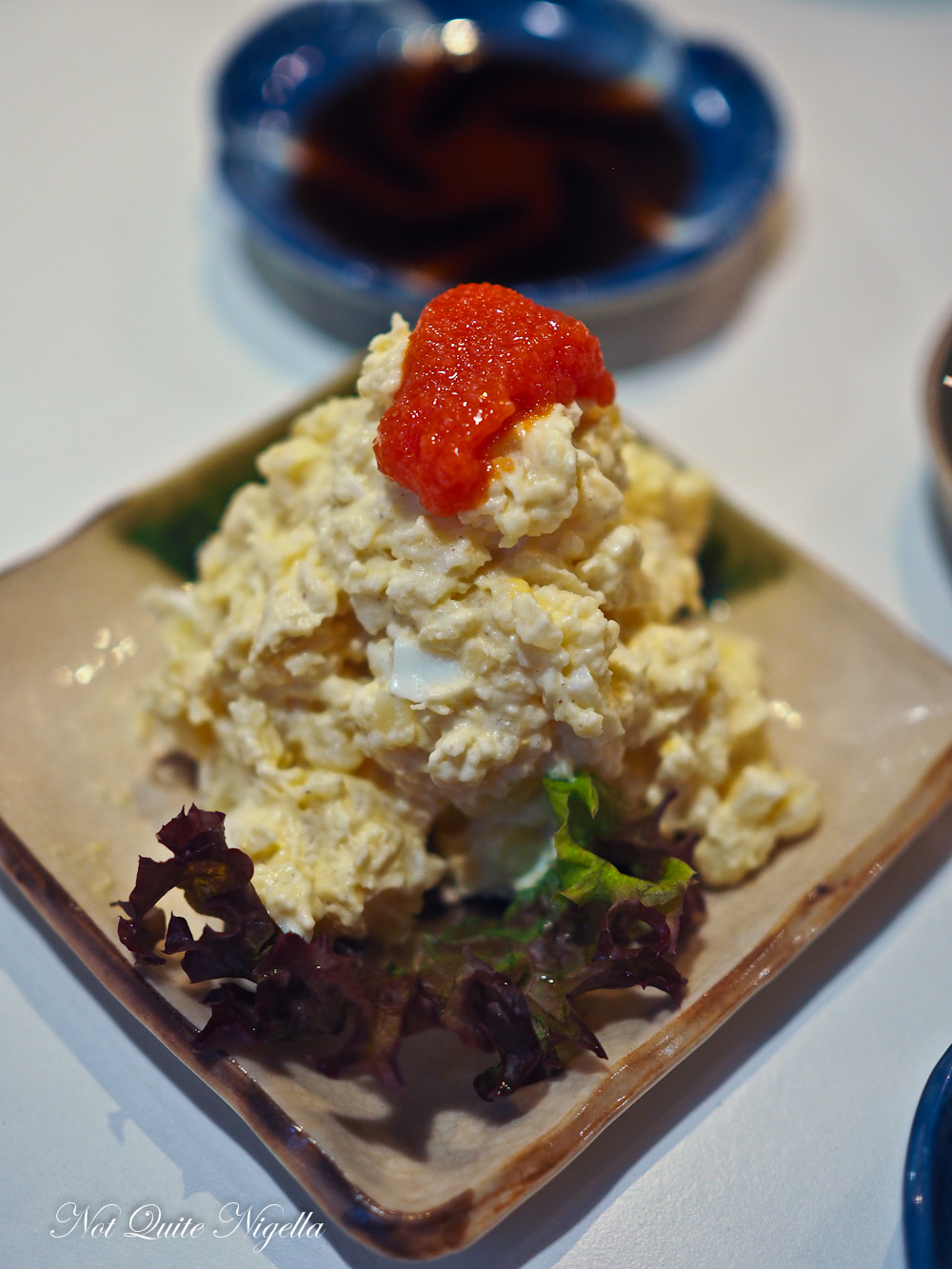 The dishes are small so we order a lot of dishes and they come out really quickly. Luckily we had a table for four so we could fit them all. The first thing is the Mentaiko potato salad. This is easily the most popular dish and can be ordered with and without roe. Japanese potato salad is delicious and this one uses white onion, egg and potato and plenty of mayonnaise as well as a dollop on top of mentaiko (pollock and cod roe) that gives it a salty burst. It's so good that we order another after polishing it off quickly. 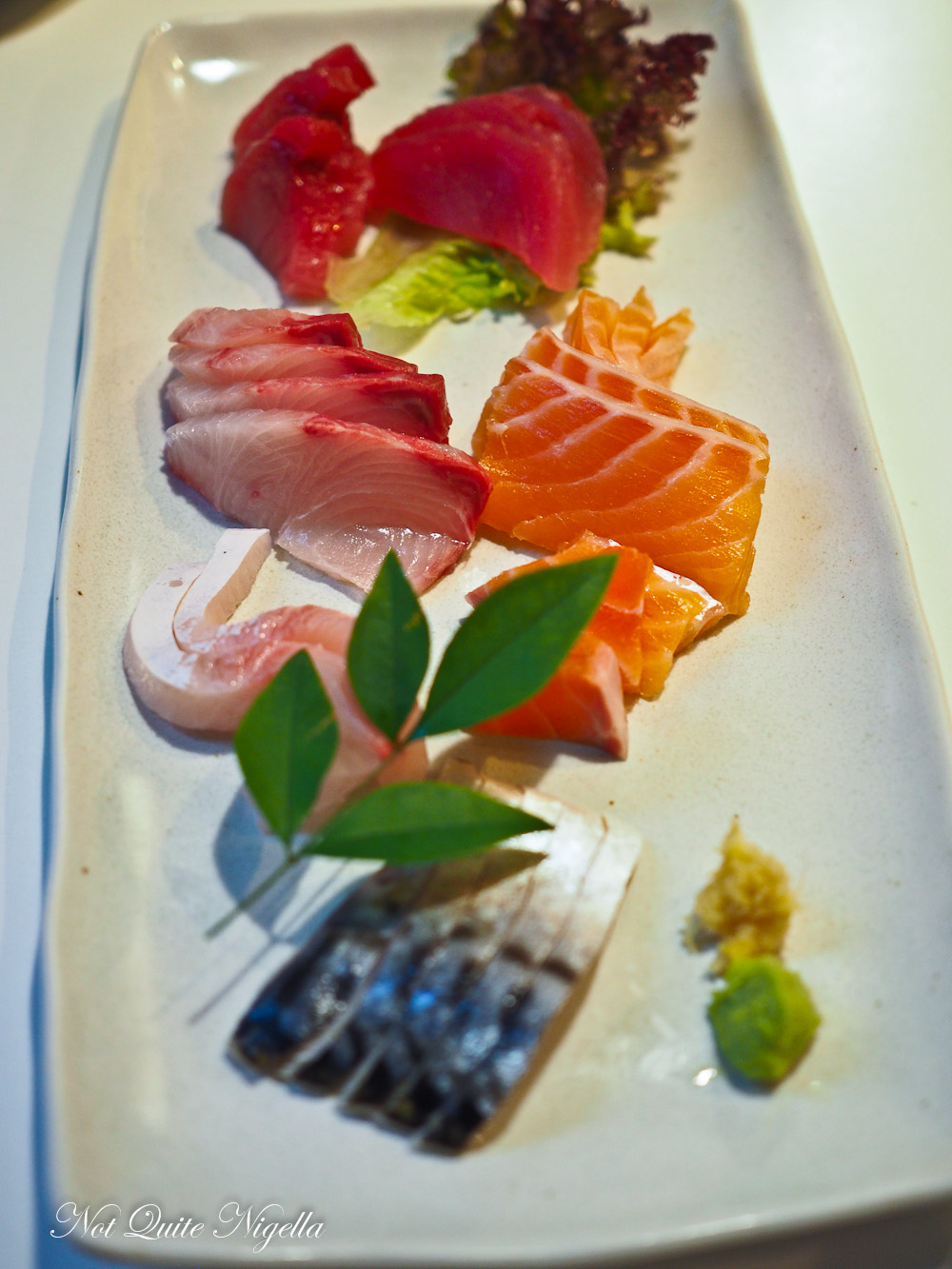 The sashimi has tuna, salmon and kingfish as well as vinegared mackerel. Mackerel is a popular fish in Japan and has a strong fishy taste that I happen to love. The vinegar cuts through it well and this is my favourite along with the salmon while Mr NQN who is a creature of habit, adores tuna. 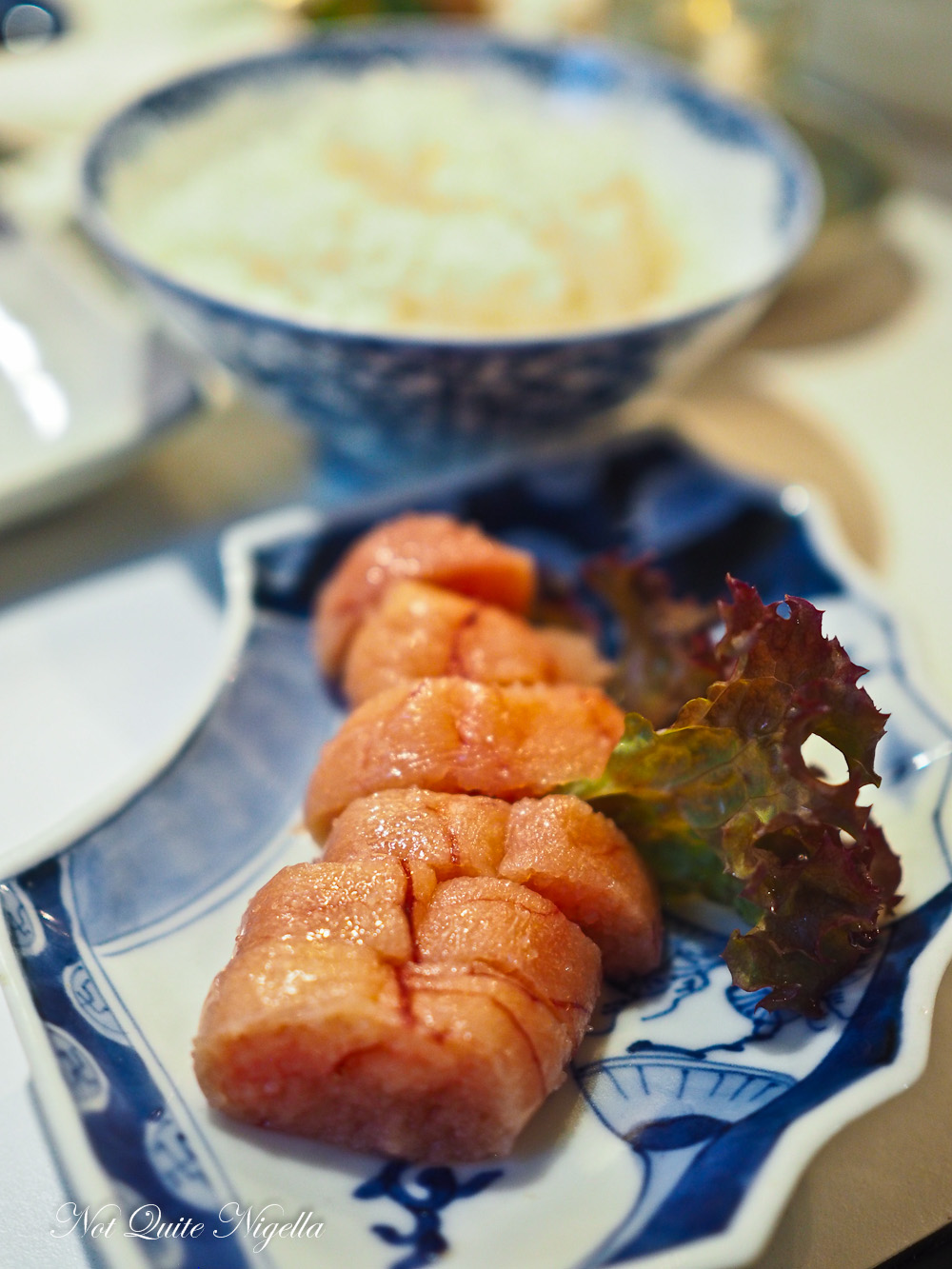 This is JY's choice. I don't mind it but she says that it's best eaten with rice and sesame oil and I would have to agree with her that it needs just that little something extra like sesame. 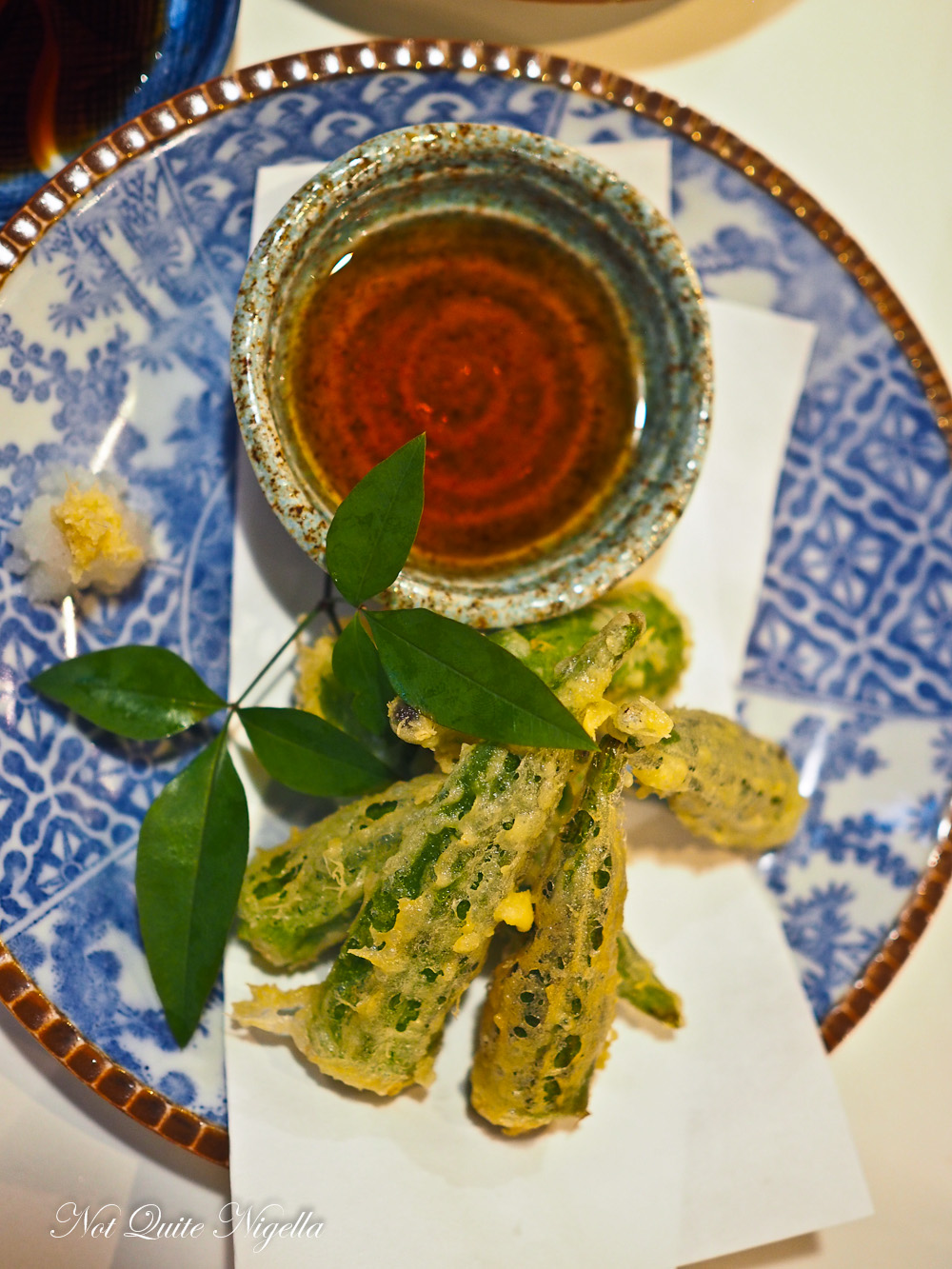 We were a bit puzzled about okura but it turns out it is okra and okura is the Japanese katakana pronunciation of okra. It's not bad but I had one piece and moved on to other things. 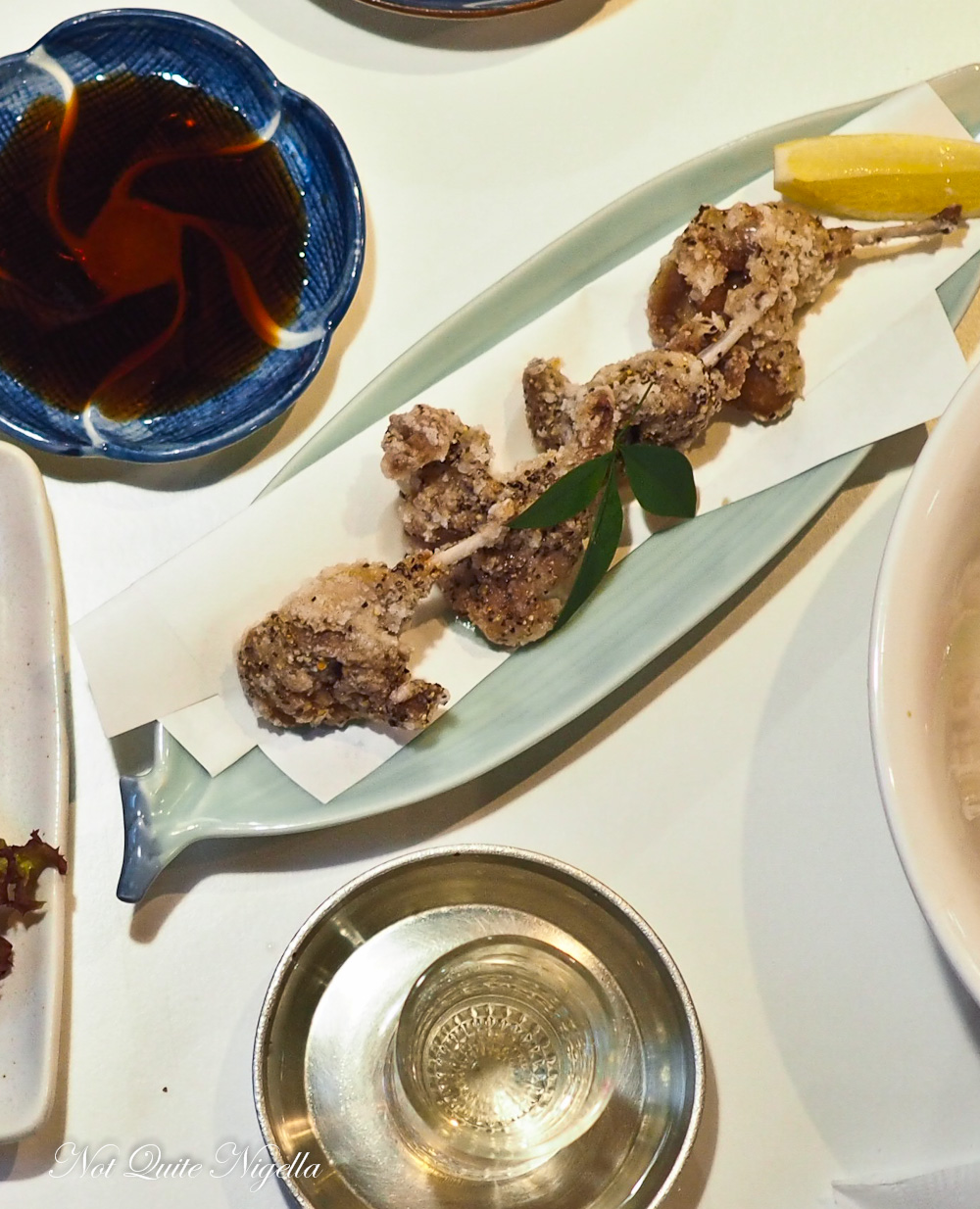 The quail is lightly battered and comes as four succulent leg pieces. I do love the texture of juicy quail although I never find one leg quite satisfying enough. It comes with daikon and ginger which we are to mix into the sauce before dipping the quail legs in. 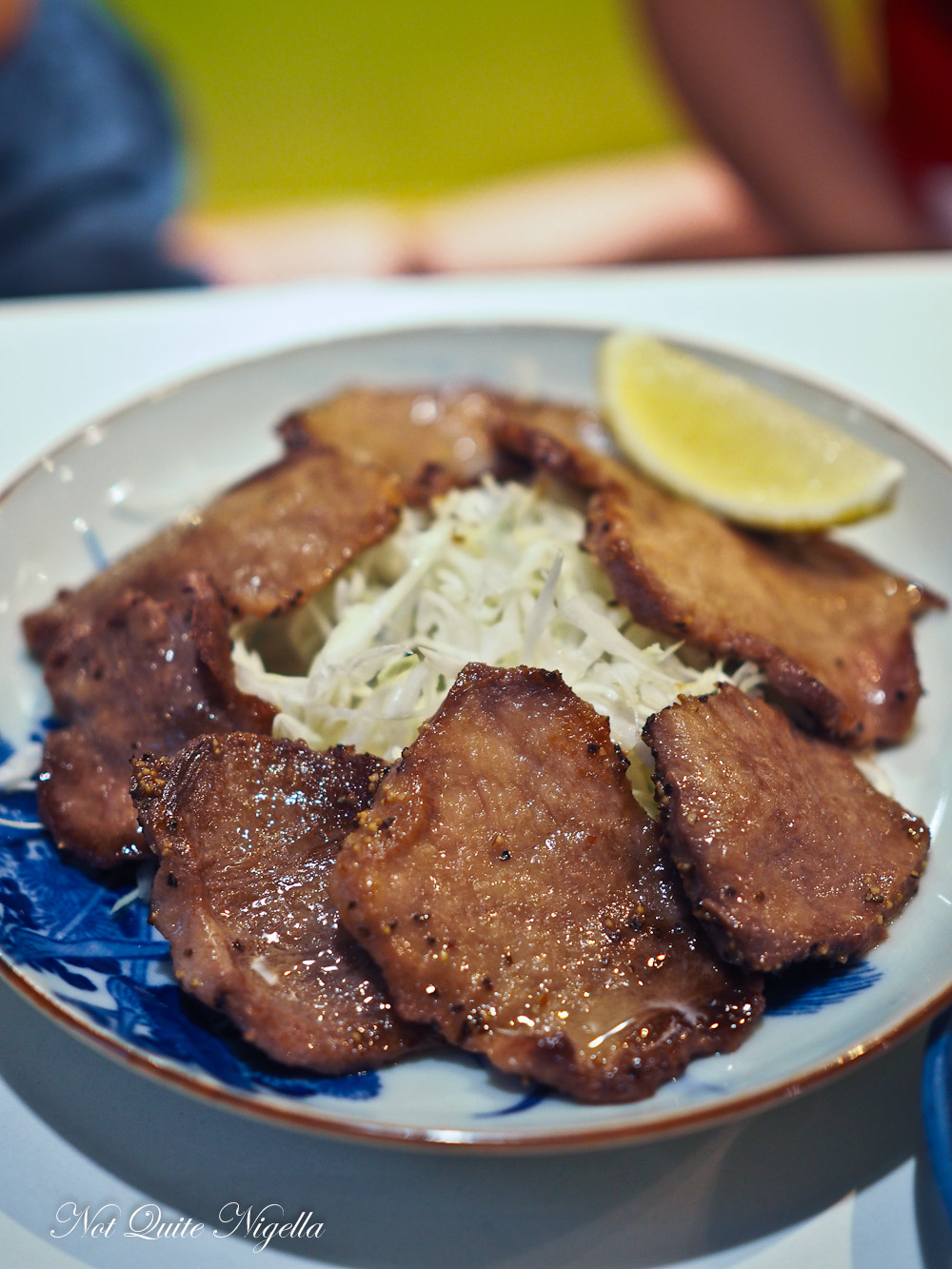 Ahh I do love ox tongue and this juicy, fatty cut is superb on some plain steamed rice. It is simply seasoned with black pepper and some freshly squeezed lemon. And yes I made myself a little nigiri wrapped in ox tongue (you can't take me anywhere). 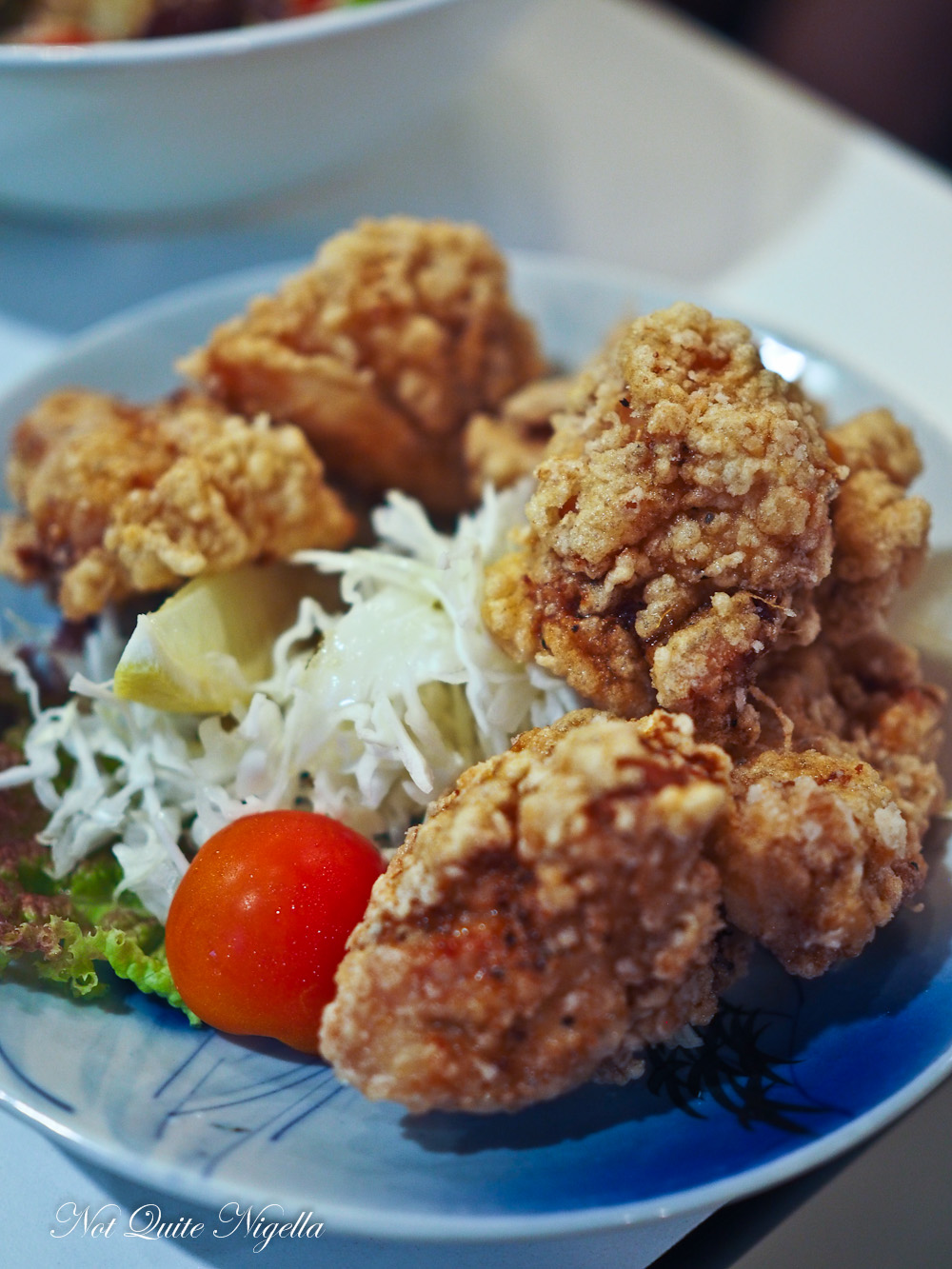 We ask for some extra mayonnaise as it goes so well with the juicy pieces of chicken karaage. They're boneless and lightly battered with a hint of ginger in them. I find myself going back for piece after piece of this. 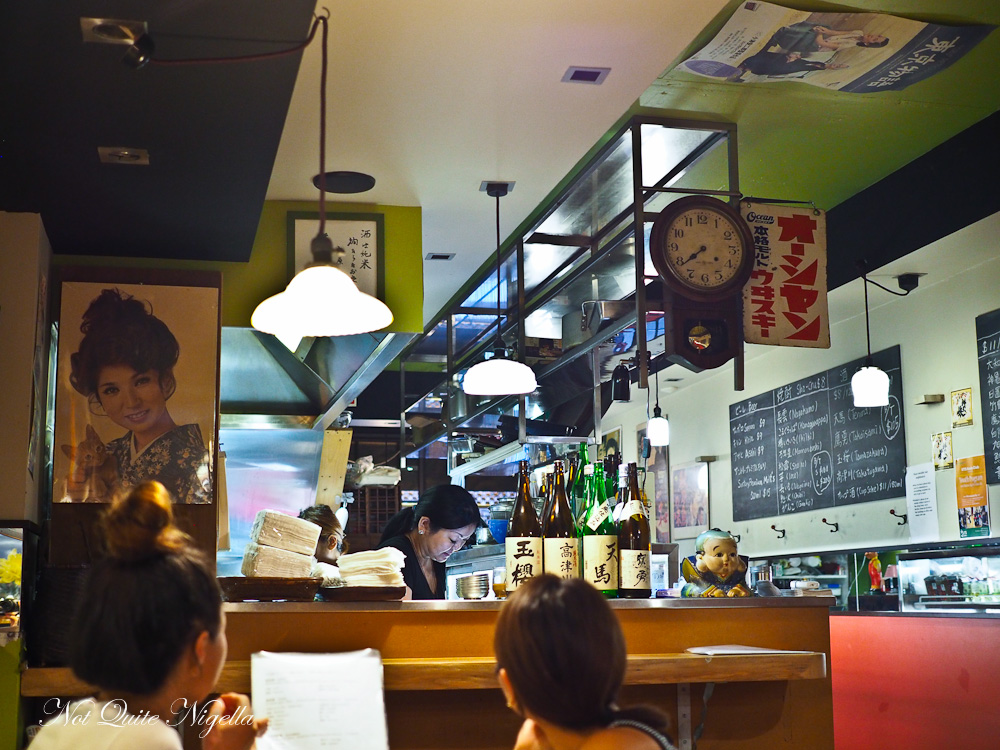 It's an hour since we walked in and we've finished everything. We feel as though we were part of a hurricane that swept through, ate lots of food and then left as quickly as it arrived. We have plans for dessert elsewhere (see this story) but there are two desserts on the menu: purin or home made custard pudding and home made apple pie. They'll have to wait for our next sweltering day...

So tell me Dear Reader, what is your favourite fish on a sashimi plate? How do you decide on where you eat out? Do you and your friends have a "to eat" list? And are you a fan of sake? 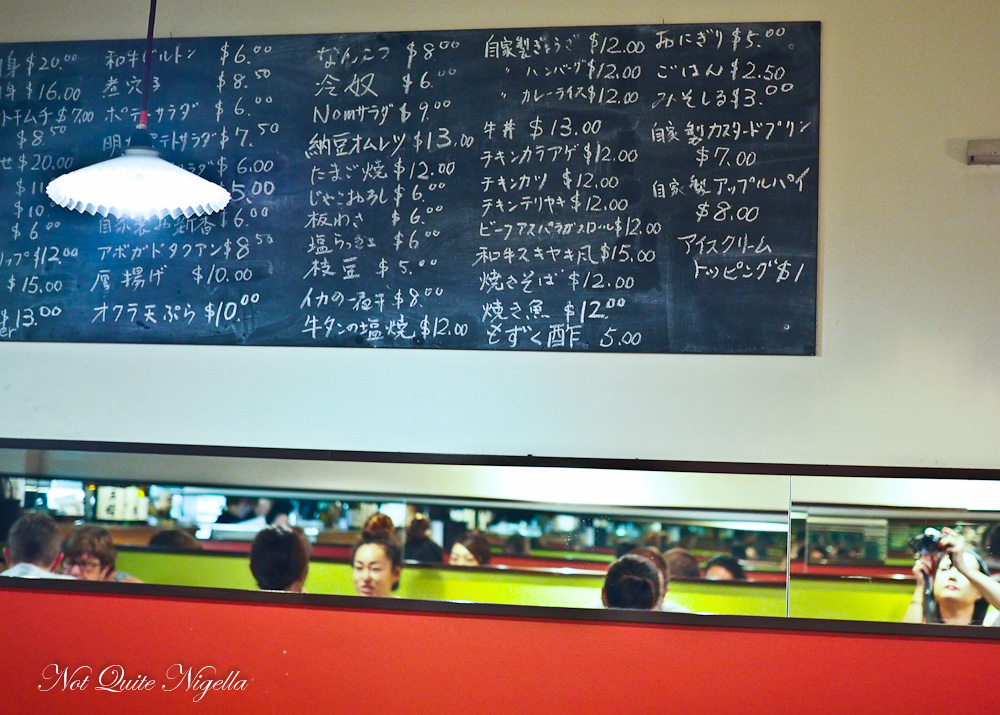