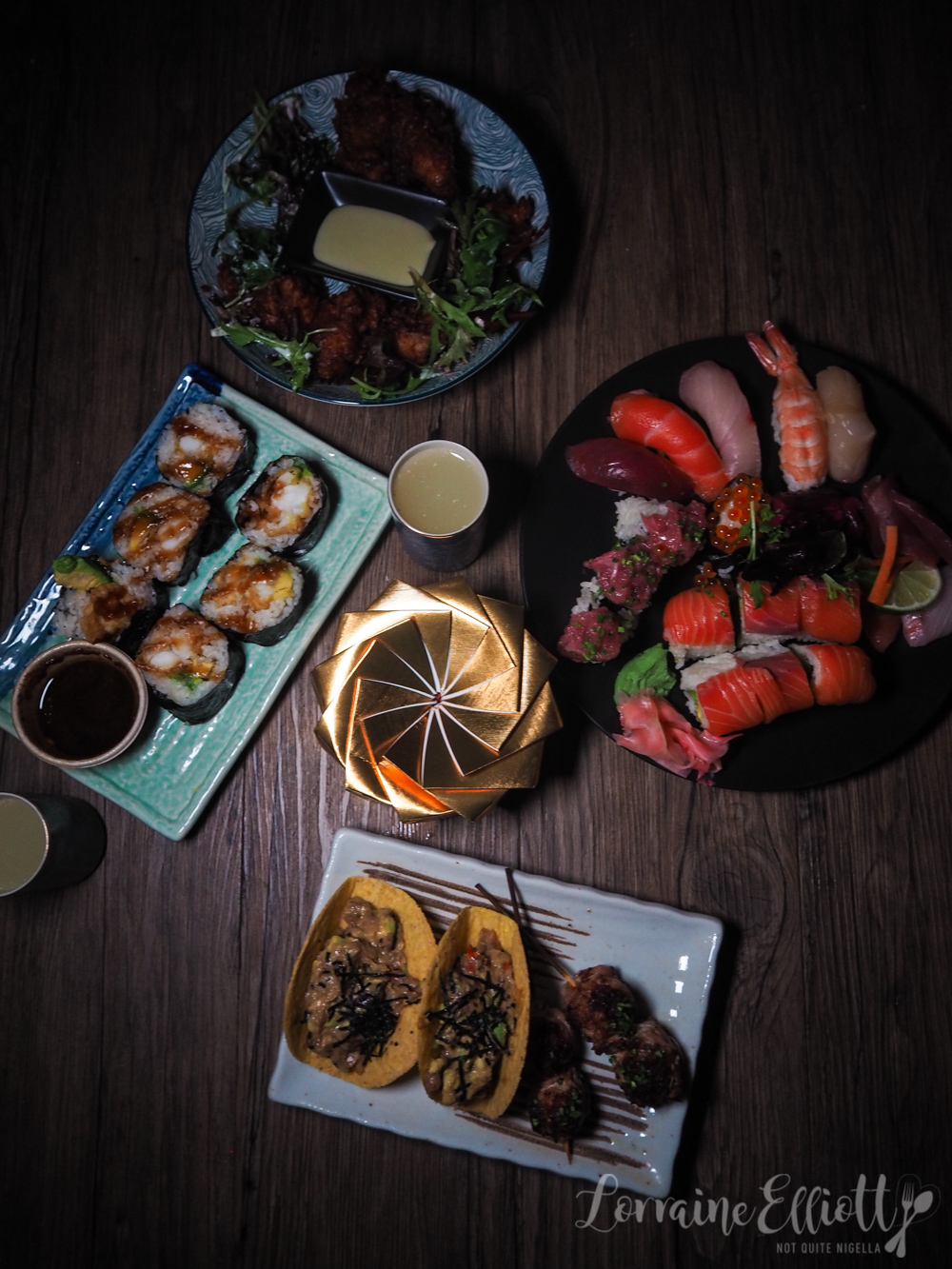 Yachiyo is a Japanese bistro restaurant in Darlinghurst that serves gold origami boxes and delicious sushi. These fancy chirashi sushi boxes are perfect for a birthday or special occasion (or just getting through lockdown!). Their menu also has items like tuna tacos, Balmain bug rolls and pork belly skewers plus frozen DIY udon kits!

It was Mr NQN's birthday and I was trying to find a place that had something a bit different. He loves Japanese food and sushi but when I saw Yachiyo's gold origami boxes I knew that that would be perfect. Yachiyo has locations in both Darlinghurst and Mosman and is owned by chef Mitsuhiro Yashio who grew up on the island of Tanegashima in southern Japan. 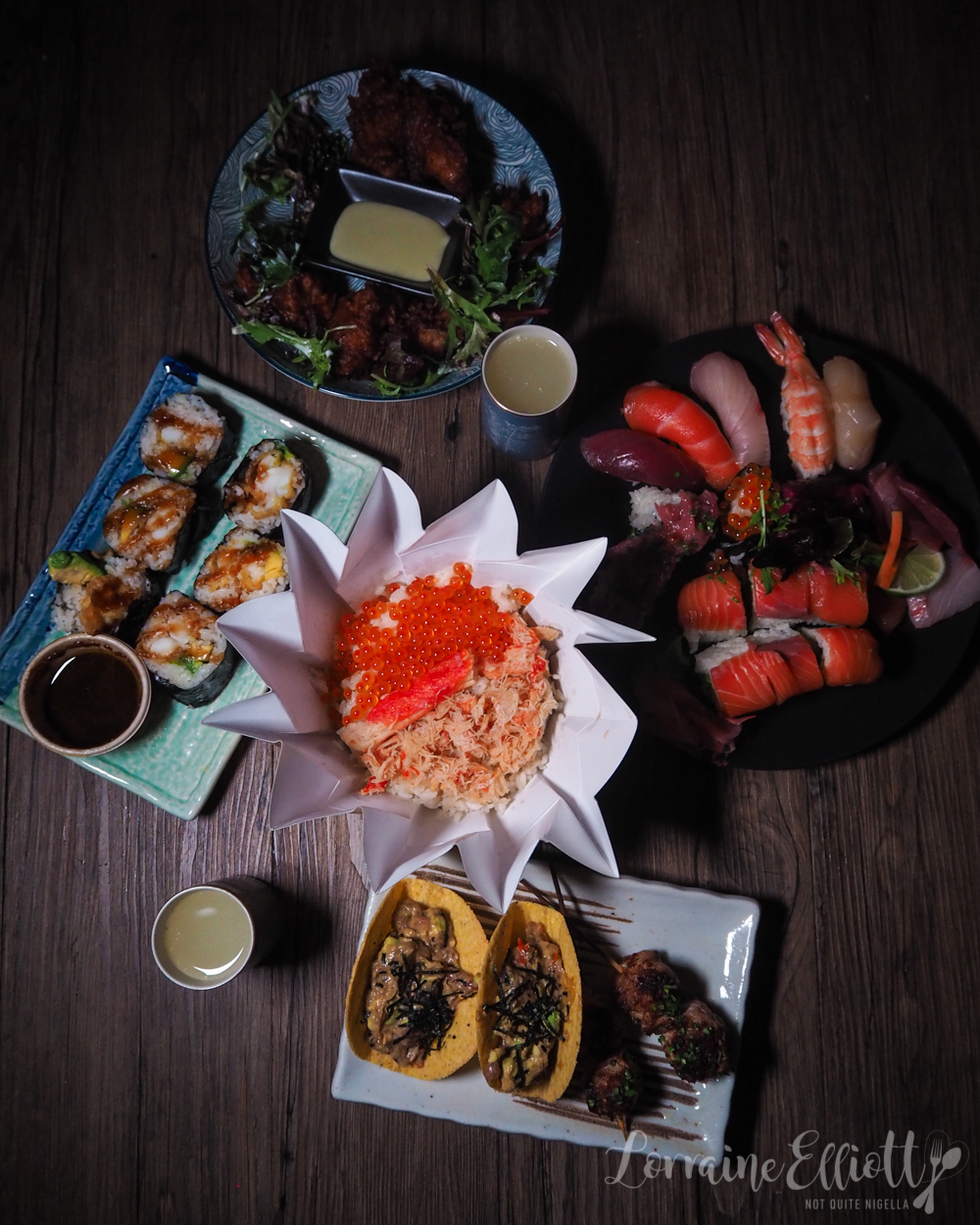 Mitsuhiro came from a hospitality background with his parents owning a restaurant in his home town in Japan. His father is an owner chef and his mother is a nutritionist. He grew up working in the family restaurant business and then branched out to work in Kyoto under the guidance of a 2 Michelin starred chef who still proves to be an influence along with his father.

The menu is exactly the same at both locations. While they have a menu that you can access online on their website, they don't have one on their Instagram account that featured the gold origami boxes. The takeaway menu does not include the gold origami boxes so you have to do a bit of a hybrid model of ordering. The gold boxes are chirashi sushi with a bed of rice and a seafood topping and come with three different toppings. We pick our order up from the restaurant that evening at 6pm. They're kind enough to give us some complimentary yuzu sake for Mr NQN's birthday. 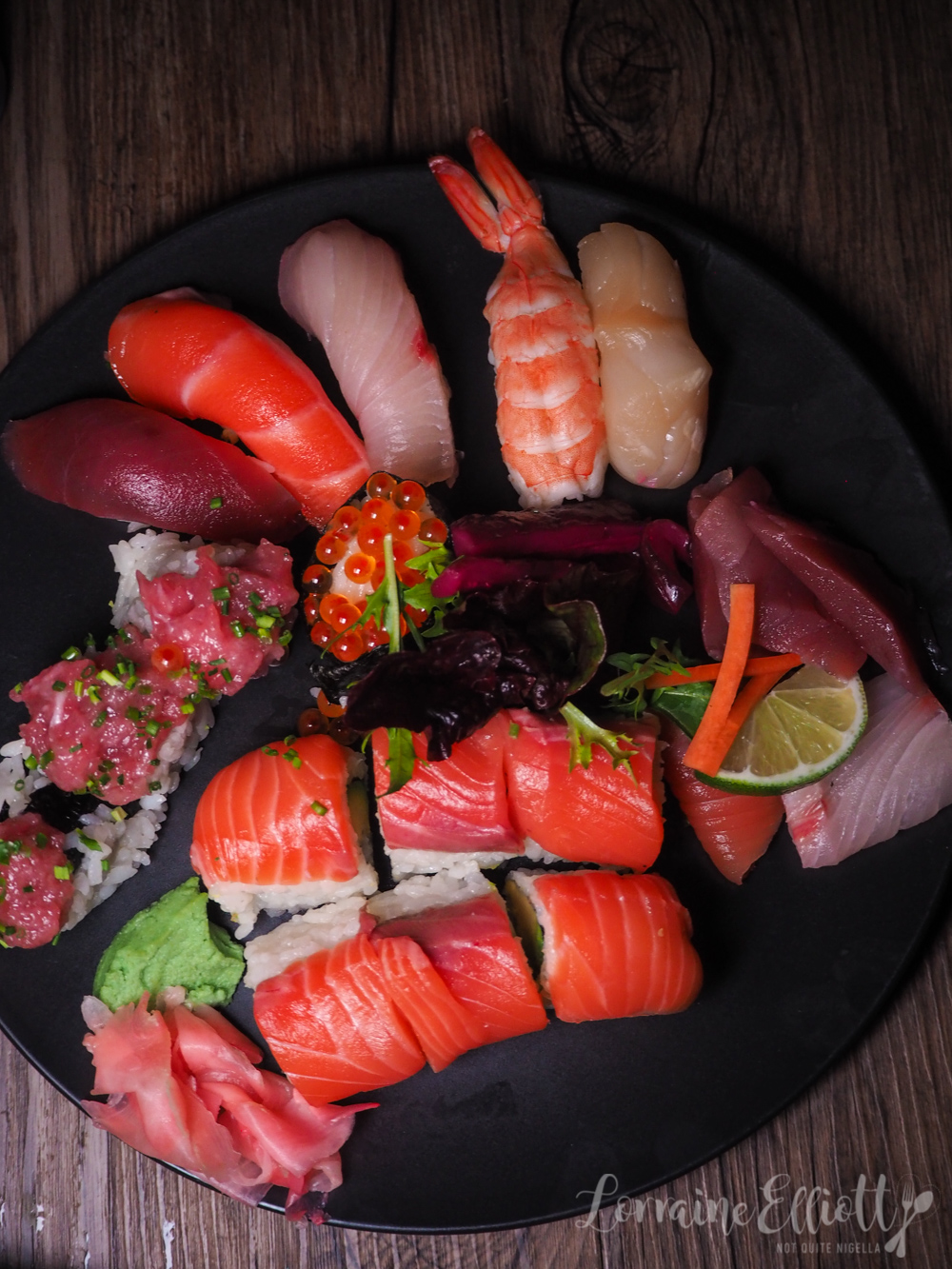 The sushi box has an excellent range of sushi and a few slices of sashimi. There's a good variety from salmon, tuna, kingfish and prawn with rolls and nigiri. It's plentiful and fresh and there's enough to share along with other dishes. 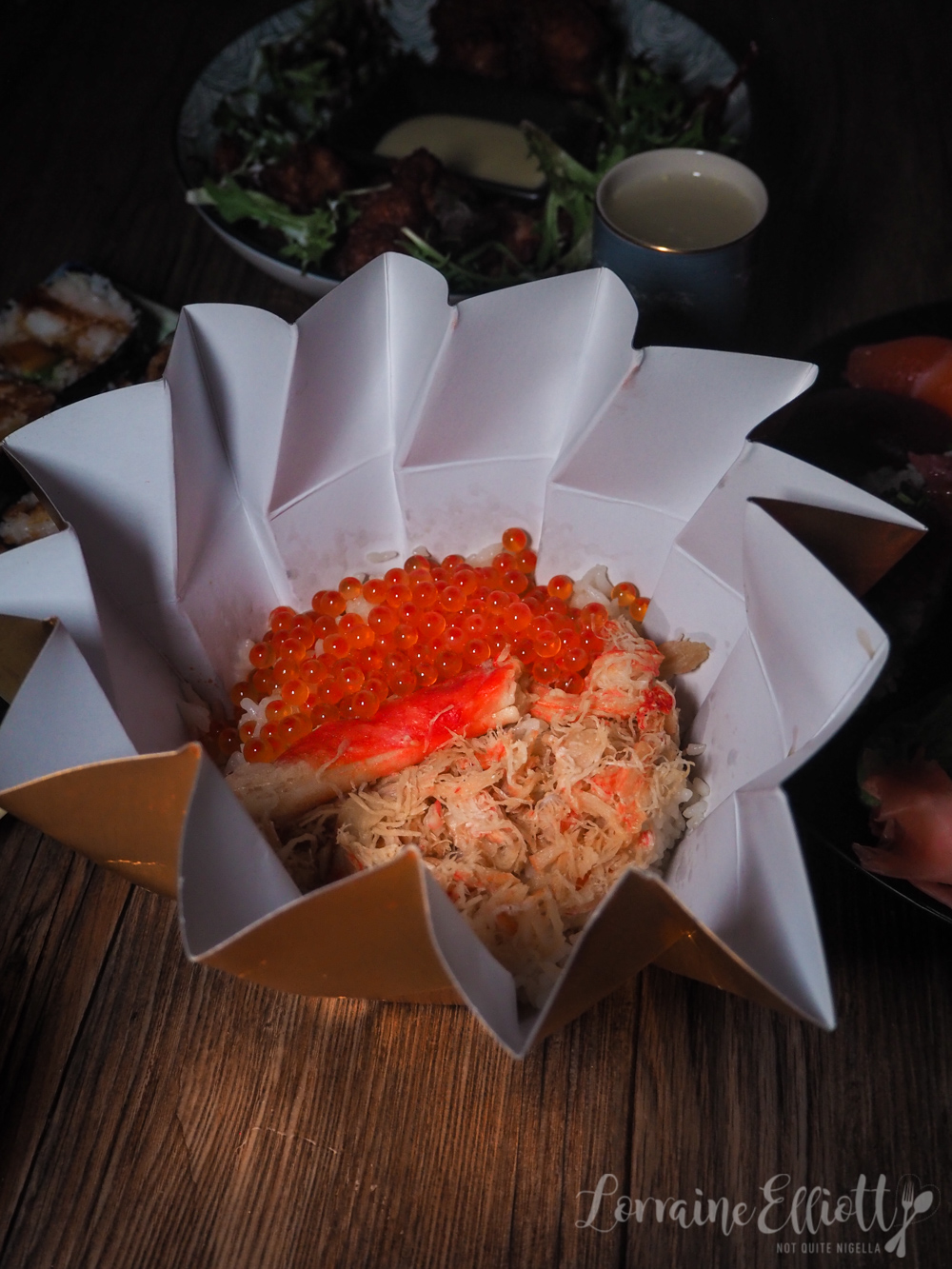 There are three types of the origami box: ikura and sea urchin, king crab meat & ikura and king crab, ikura & urchin box. We went for the crab & ikura box as Mr NQN isn't a massive fan of sea urchin. It's a bed of vinegar seasoned rice with picked king crab meat and ikura salmon roe. It's quite decadent having this much crab and ikura on top of rice. The crab is interesting as it isn't really dressed so it can tend to be a bit dry but this is the style it is served in Japan and it is best when you mix up the ikura roe and the crab together. Also I added some Sriracha kewpie mayonnaise. 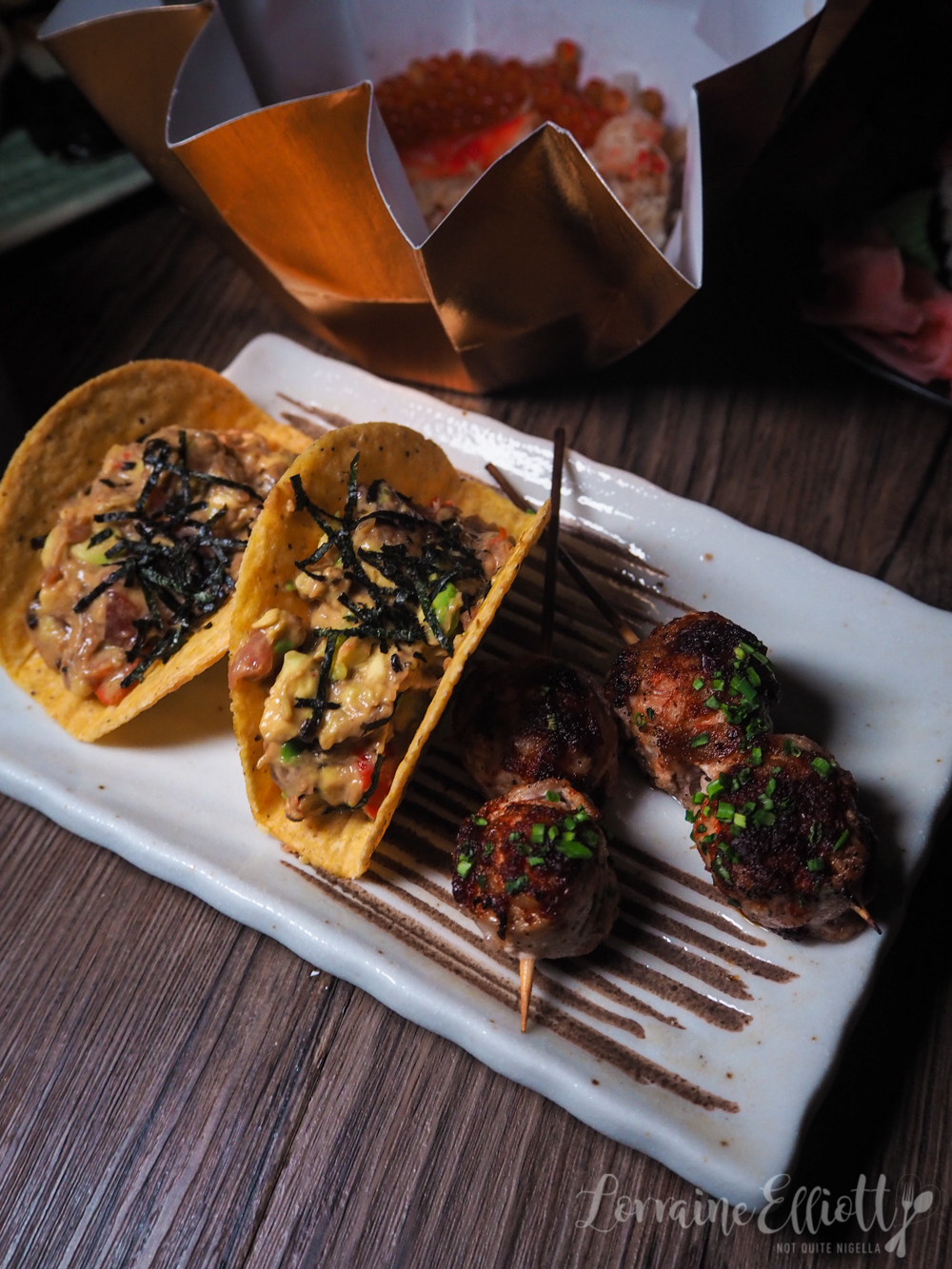 2 Tuna Tacos $6 each and Pork Belly Skewers $6 each

The tuna tacos are filled with seasoned sashimi tuna in a crisp corn taco shell. This dish was inspired by Mitsuhiro's time as an exchange student in America during high school where his host family was Mexican. The pork skewers are pork belly meatballs and one of the most popular items. 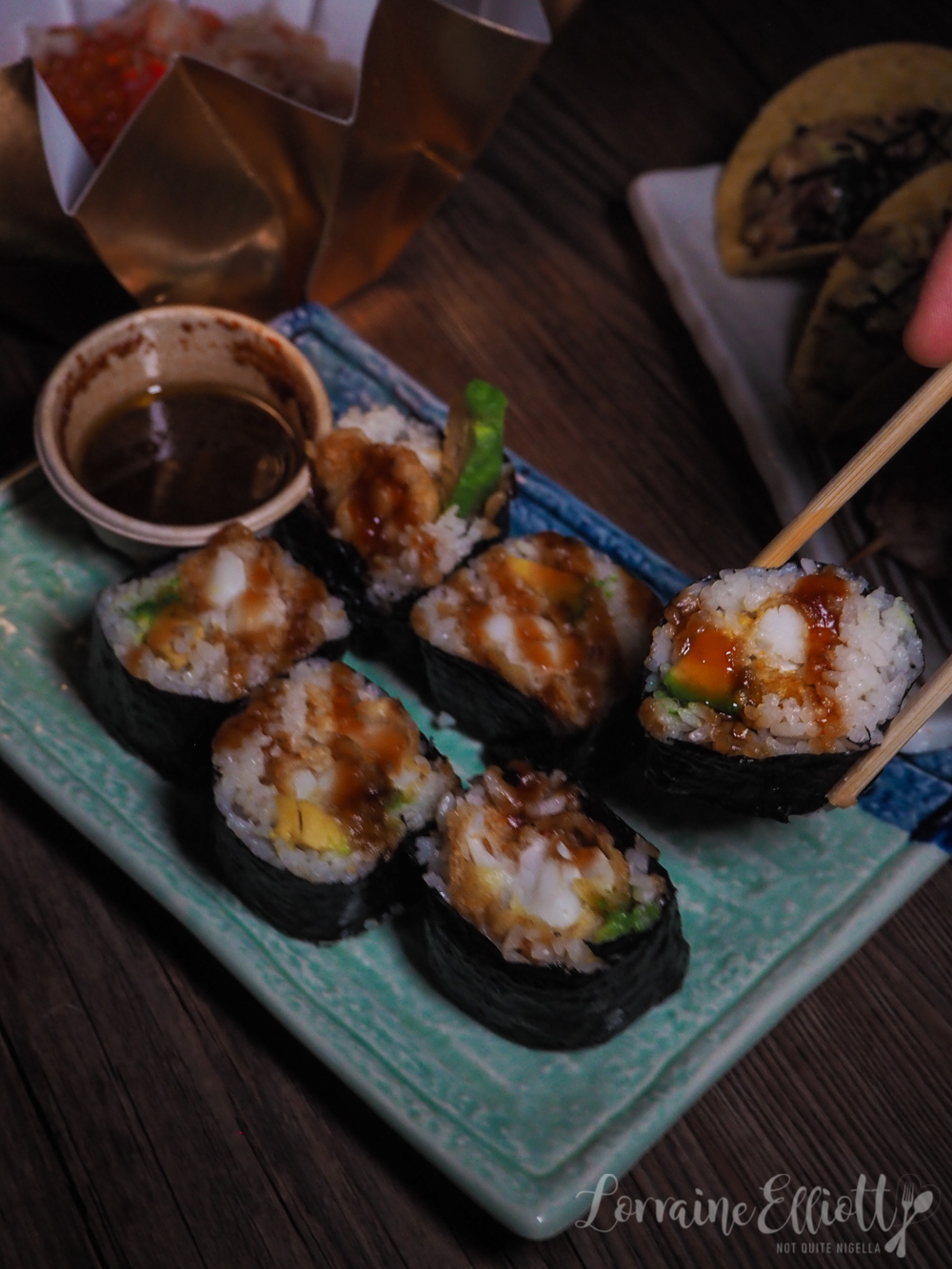 Although I don't think we really needed to order the Balmain bug roll, I couldn't resist it as you don't often see sushi rolls with deep fried battered balmain bug meat inside. It's similar to prawn in texture and comes with a sauce that you pour over it although it is flavoursome even without this. 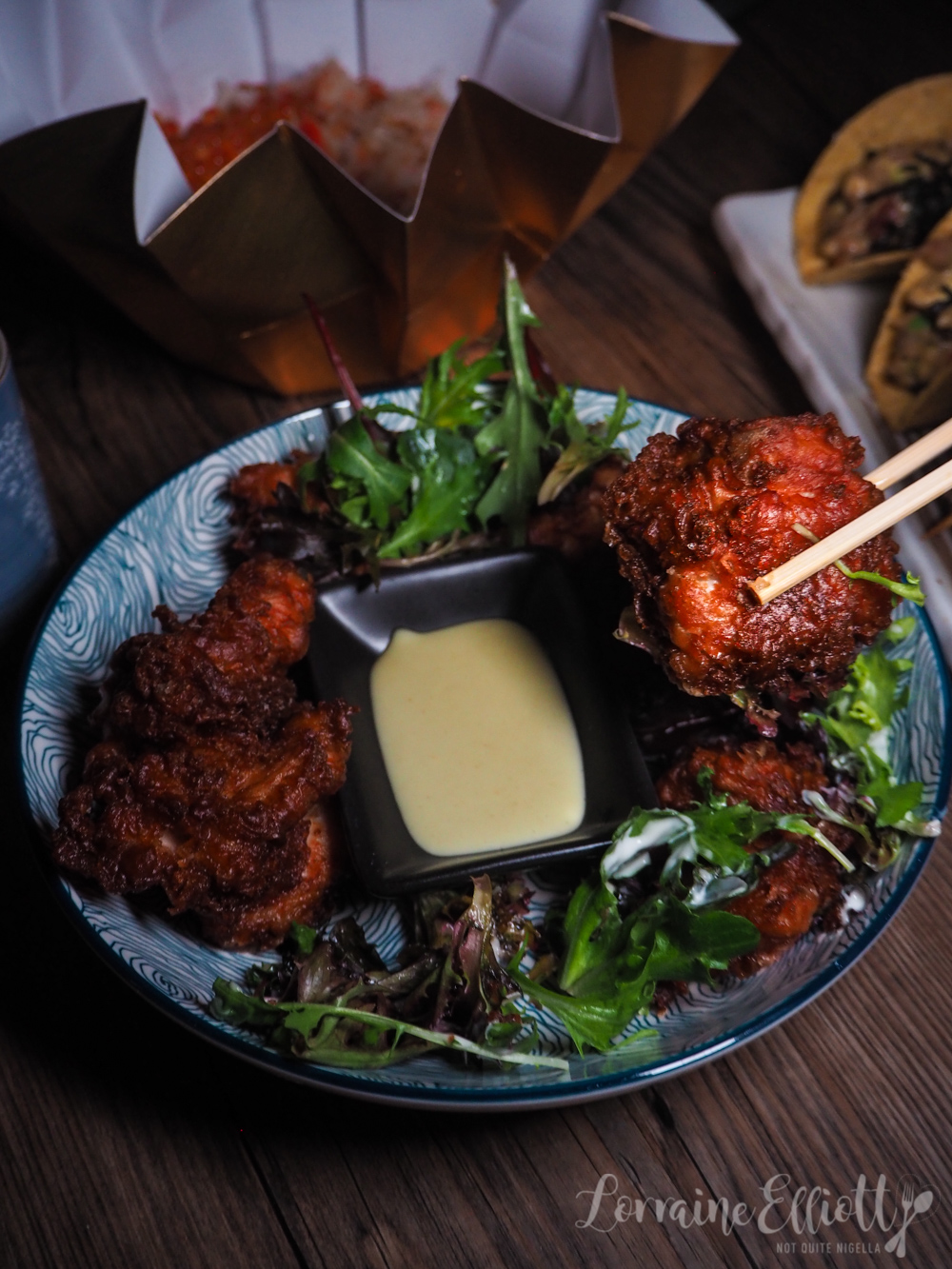 Long time readers will know my weakness for chicken karaage and this one comes with a wonderful wasabi mayonnaise. This is one of my favourite chicken karaage as the chicken is so juicy and moist and I have to admit that I ate most of this while Mr NQN was distracted by the sushi. 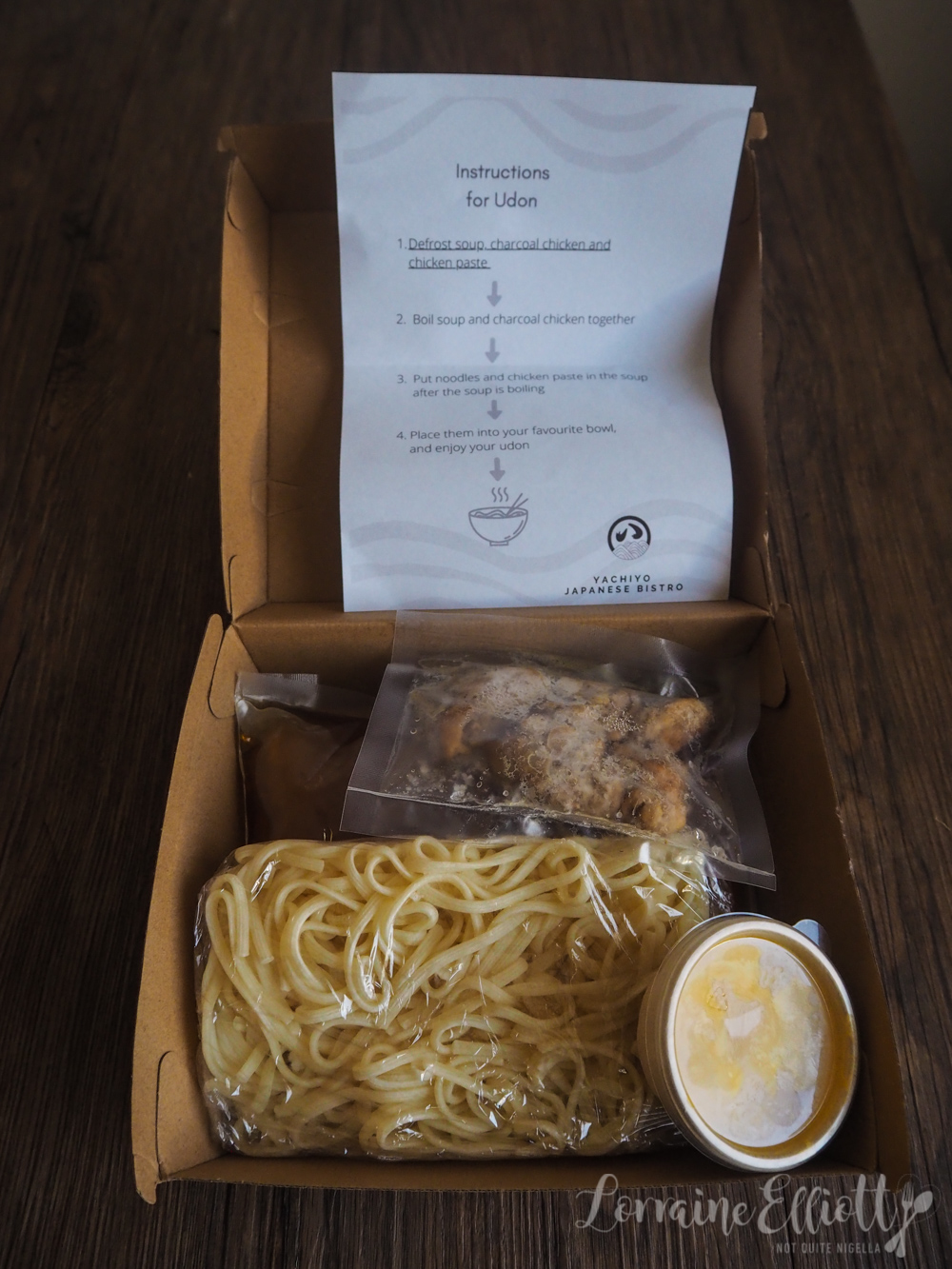 They also gave us a nice surprise: a complimentary frozen udon kit that I cooked up the following day. It's very easy and all you need is a small saucepan or pot. It's best if it is all thawed and you heat up the broth, chicken paste and charcoal chicken pieces and then you add the house-made udon to the mixture for a few minutes until cooked. It's a delicious meal for winter and good to have standby. 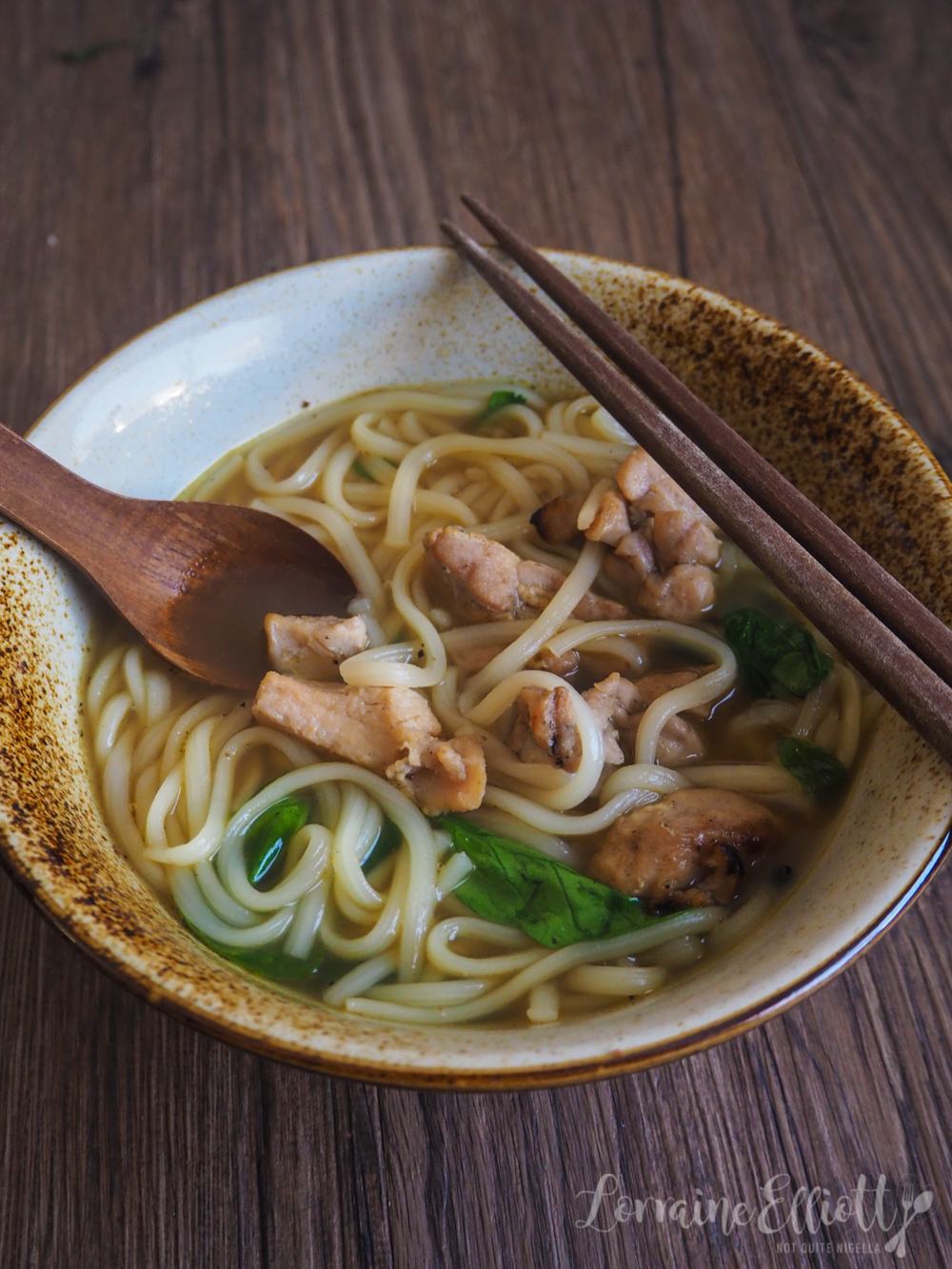 So tell me Dear Reader, do you ever order something as a reward for getting through another week of lockdown? What is your ultimate reward food?