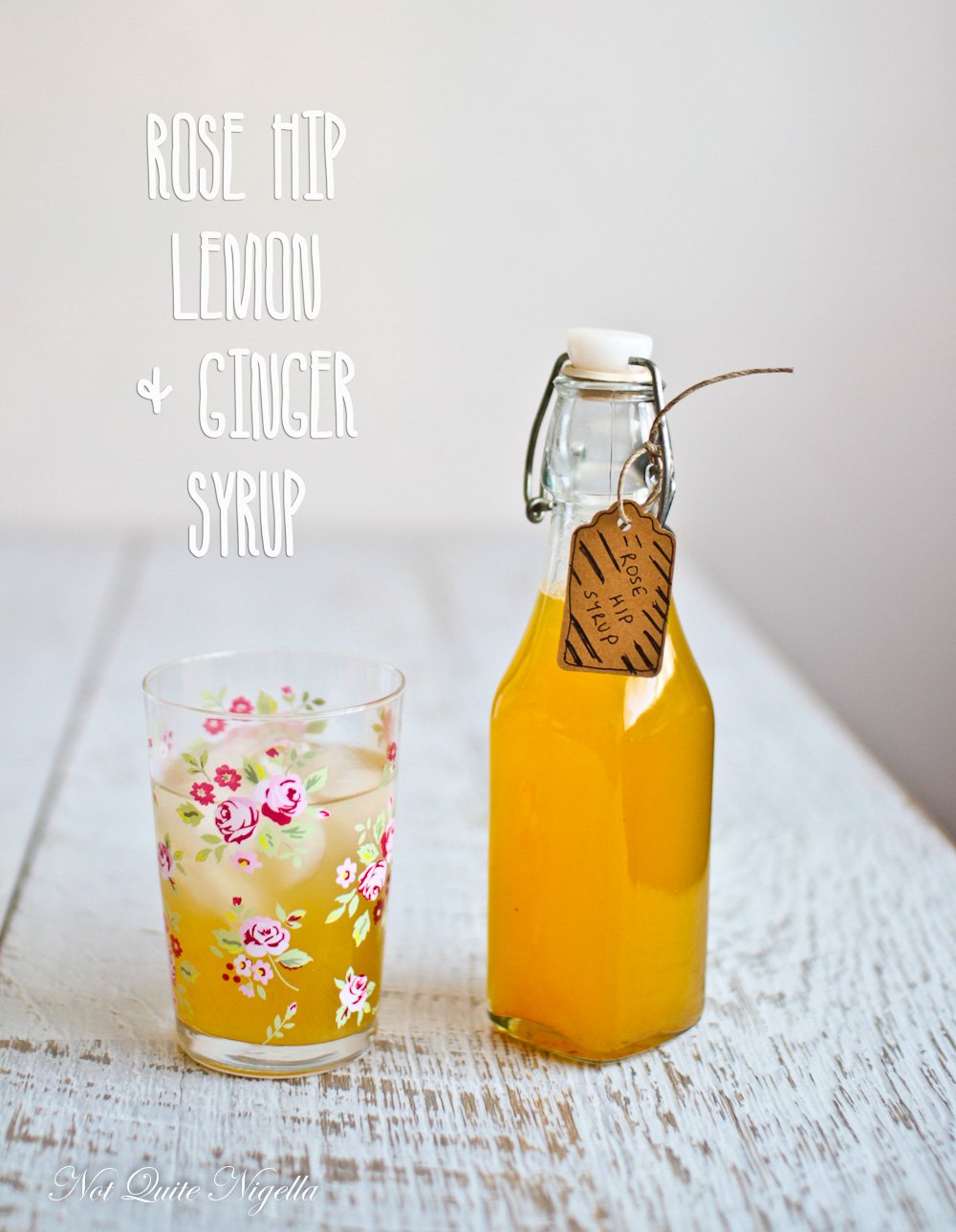 Ever had rose hips? Chances are you may have tried rosehip in jam-it's a popular jam ingredient in European jams but if you were a child around WWII then you may have had it in syrup too. Rose hips, or the fruit of a rose plant are very high in Vitamin C and a teaspoon of syrup was given to children to boost their immune system. The practice has fallen out of favour is lieu of modern vitamins but they're still a natural and tasty source of Vitamin C. The flavour is nothing like a rose. Rose hips have a wonderful tangy and tart flavour to them not unlike cranberries that goes well with other flavours and spices.

Our friend Louise brought me a bag of rose hips from her parents' farm near Tamworth. Her father has around 2,000 types of roses and the rose hips range from bright red to orange to black in colour depending on the rose. These were a vivid crimson orange and I decided to use them to make a vitamin boosting syrup. I would give one bottle to Louise because she gave us the rose hips, another bottle would go to my parents to make sure that they kept healthy during Winter as I always worry about them and the third bottle would go to us. You can also eat them raw but there are little hairs inside the fruit that can make the throat itchy or get stuck in your throat. 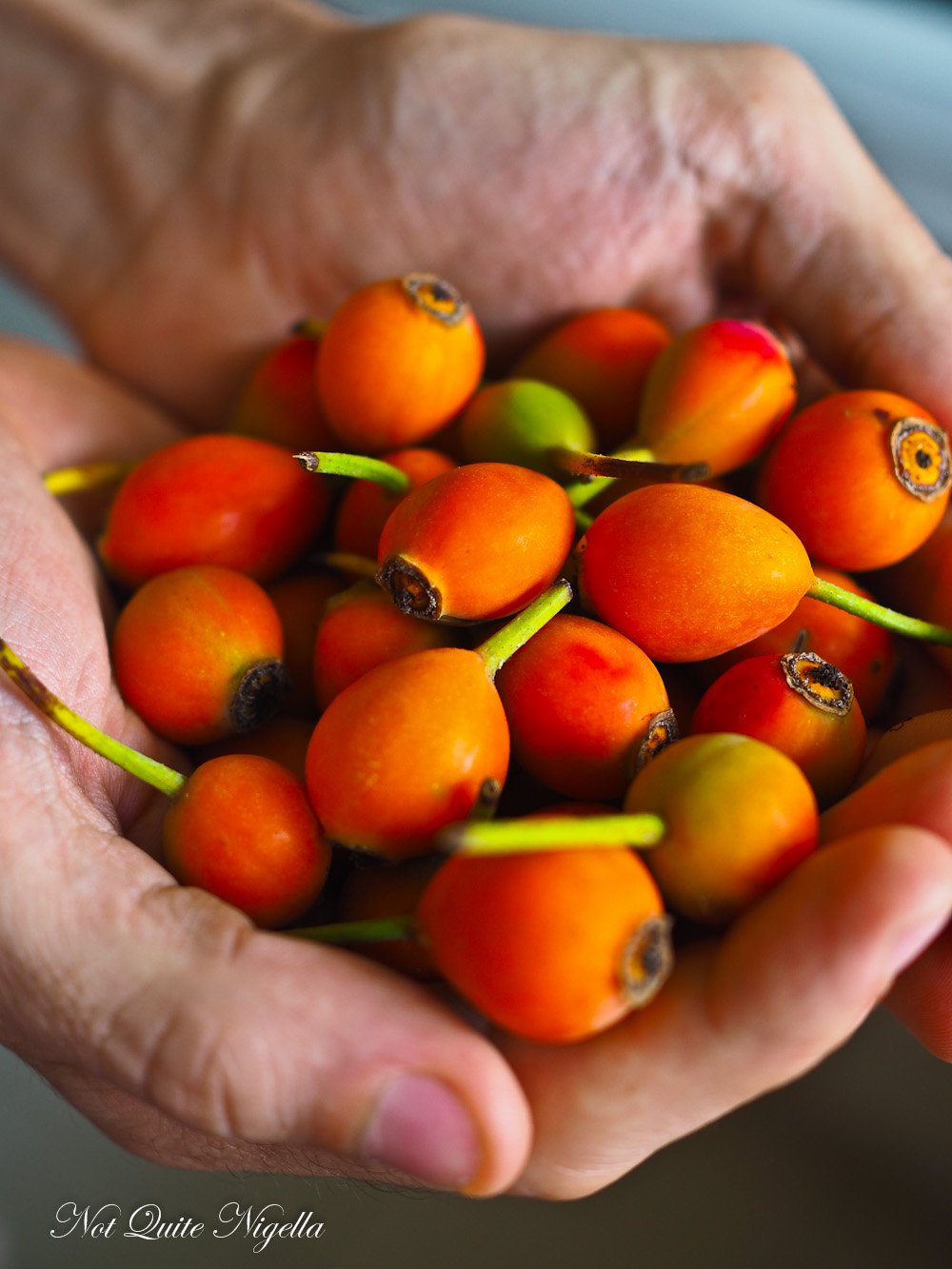 The other day I needed to send my passport in for an overseas visa for an upcoming trip to Vietnam. I'm a bit wary of sending things through the post as things get delayed and lost a lot here and you definitely want to avoid losing your passport. I wasn't able to take time off to go into the city so I asked my father if he was going to go into the city that week. Both my parents are retired and like to keep busy and are always criss crossing around Sydney.

My dad is a very funny and quirky man. He was ready for dad duty in a flash and turned up at my doorstep within a few hours to collect my passport during his daily walk. "Do you want a bag for it?" I asked him. "No I'll put it here," he said and unbuttoned his shirt and slid the envelope with my passport inside his shirt doing up the buttons quickly. "Nobody will look for it there!" he said quite proud of his hiding spot and was on his way. 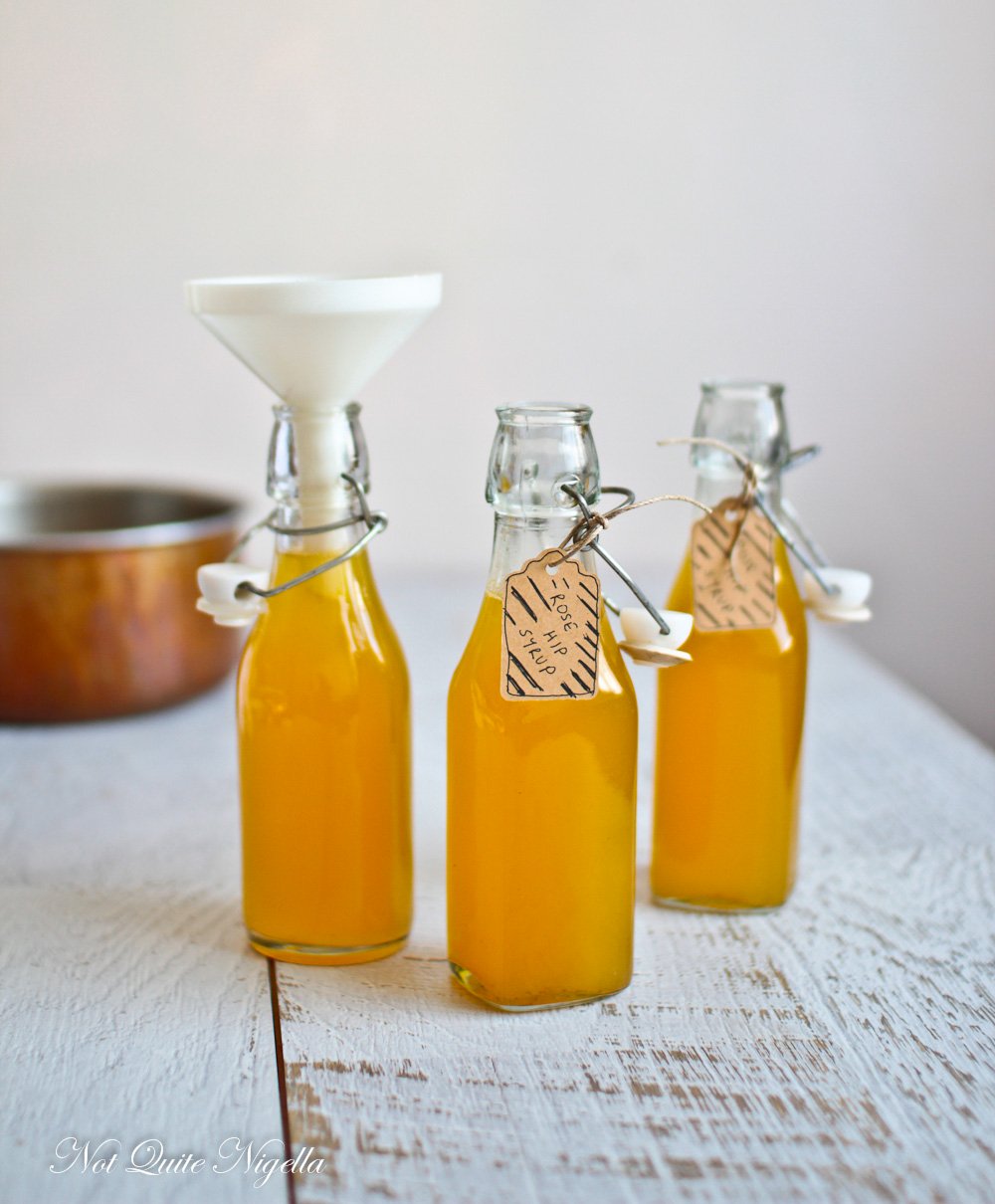 I also handed him a bottle of this rose hip syrup (and no he didn't put it in his shirt). This recipe does not require that you boil the rose hips because whilst that extracts lots of the flavour, it also reduces the effectiveness of Vitamin C as it is a vitamin that is sensitive to light, air, and heat. Ideally you could decant this into a brown bottle but I didn't have any. But if you do have access to some rose hips use them for a delicious Winter cold remedy or preventative!

So tell me Dear Reader, have you ever had rose hips and if so, how have you eaten them? How do you keep healthy in the Winter months? I'd love to hear your methods! :) 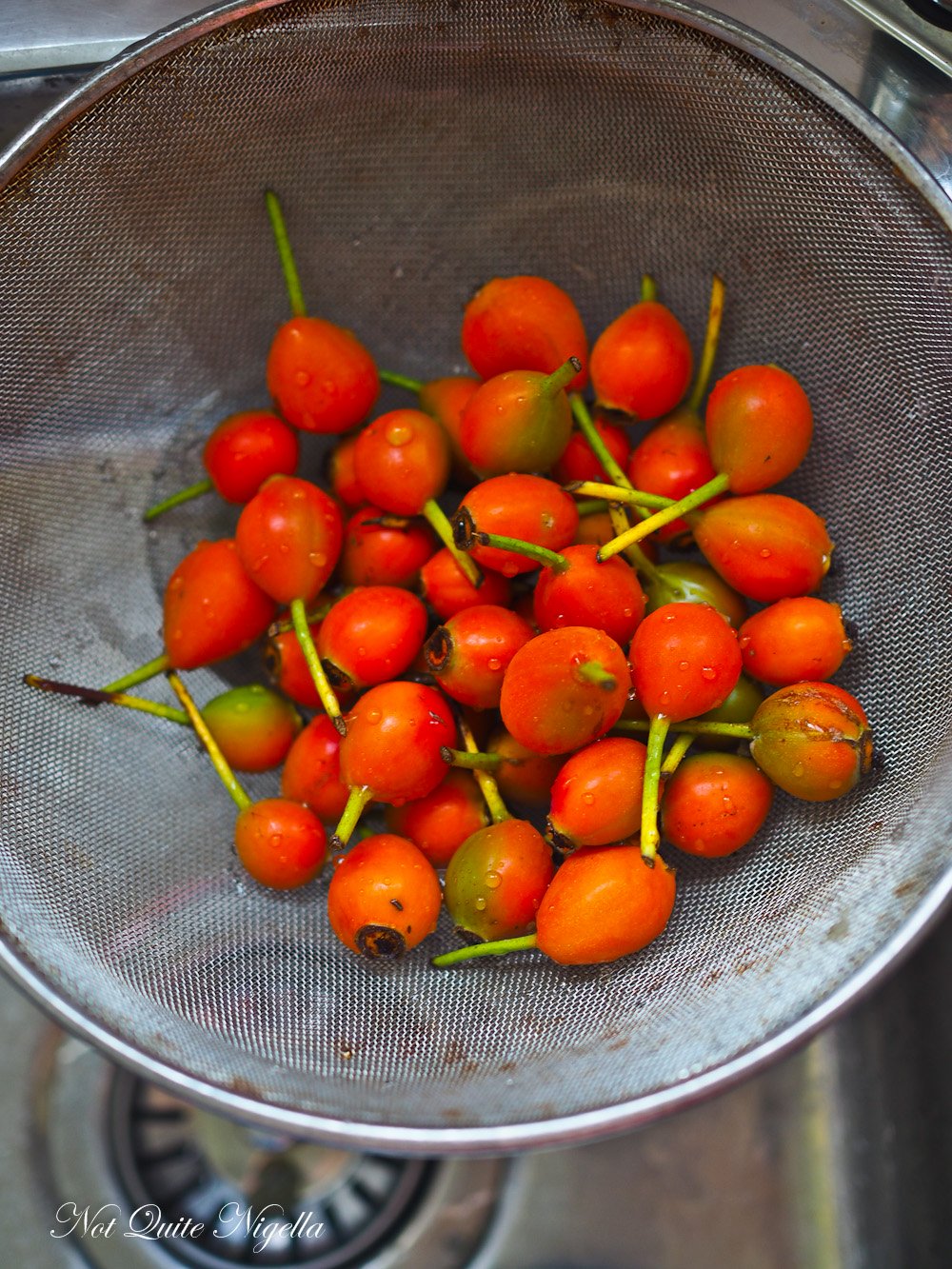 Step 1 - Put the 500ml/1.1pint of water, sugar, lemon zest and juice and ginger onto the boil and simmer for 5 minutes. Wash rose hips and place in a food processor and process until you get a fine mince. Add to the boiling water and allow to return to the boil. Once it is boiling remove from heat and allow to sit for 30 minutes (you can simmer this for 15 minutes if you are not concerned about the Vitamin C level in it because Vitamin C is heat sensitive and simmering will reduce its effectiveness). Strain through a very fine metal sieve or a muslin pouch. 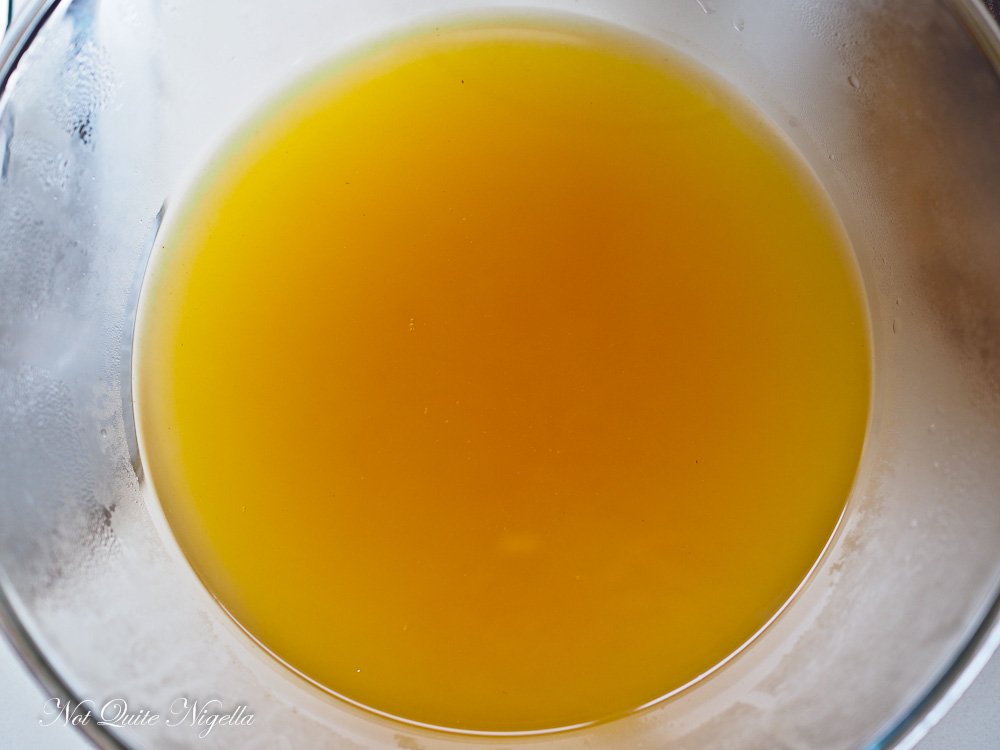 Step 2 - Place the additional 250ml of water on to the boil and add the strained rose hips. There is still plenty of vitamin C in these so again bring to a boil and remove from heat. Strain again and serve.