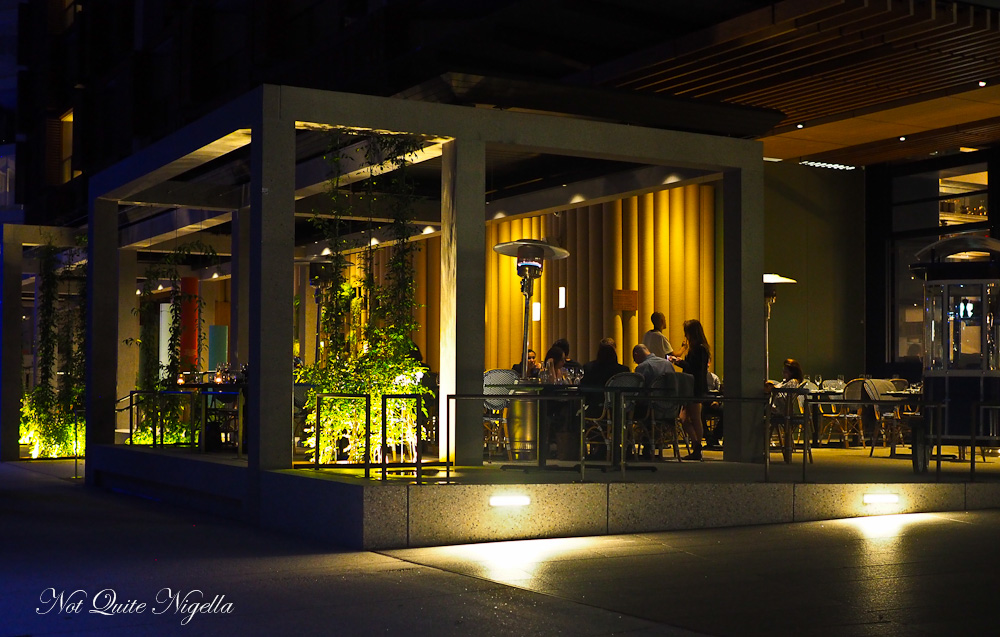 The first permanent restaurant at Barangaroo is Anason, from chef Somer Sivrioglu of Efendy in Balmain. Said to be an homage to the traditional meyhanes of Istanbul the waterfront restaurant has an indoor bar and an outdoor restaurant along Wulugul Wharf. Dishes on the menu include warm saj bread with a range of dips, a delicious beef tongue iskender with yogurt and curly peppers. And the poached quince dessert is a must order being as beauteous as it is delicious. 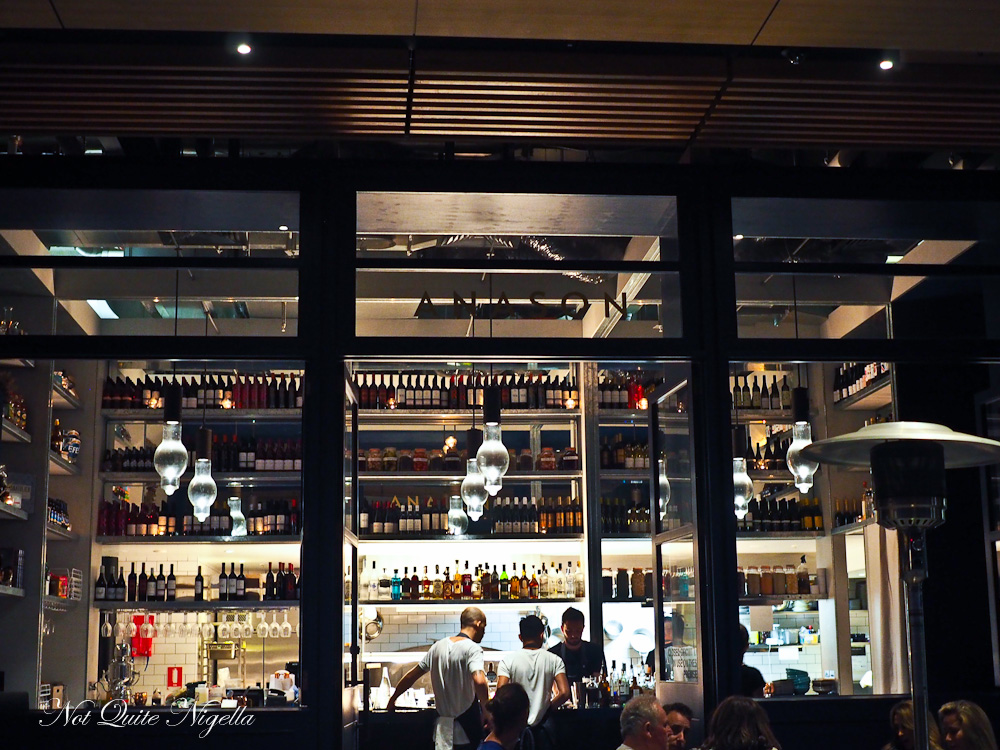 Tuesday nights are tough for restaurants. It's early in the week, some people are still taking advantage of tight arse Tuesday at the movies and well it's getting chillier as Autumn settles in so outdoor eating becomes more indoor eating. 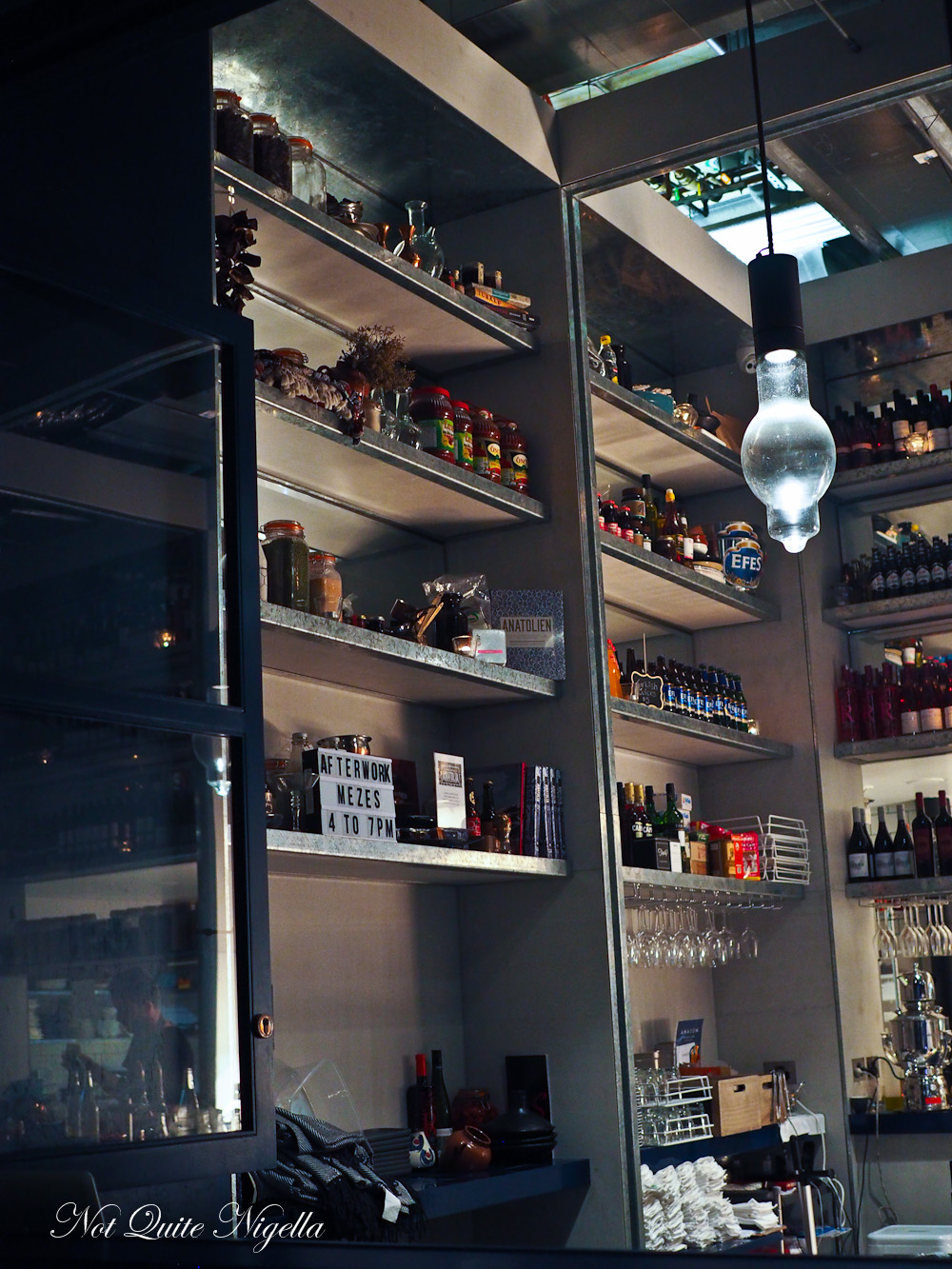 The quietness may also be because I'm also quite early at Anason, the newest Turkish restaurant from Somer Sivrioglu from Balmain's Efendy. "Anason" is the Turkish word for aniseed, the flavour basis for Raki, the popular Turkish alcoholic drink. The crowd this evening looks like a mostly corporate crowd, perhaps some from the nearby tall buildings, spilling out at the end of the working day. I'm early so JY aka the Black Widow isn't expected for another 25 minutes. But there's plenty of time for the waiter to spend 10 minutes explaining the concept and the menu to me. Something I suspect he may not have time to do on a busy Saturday night. 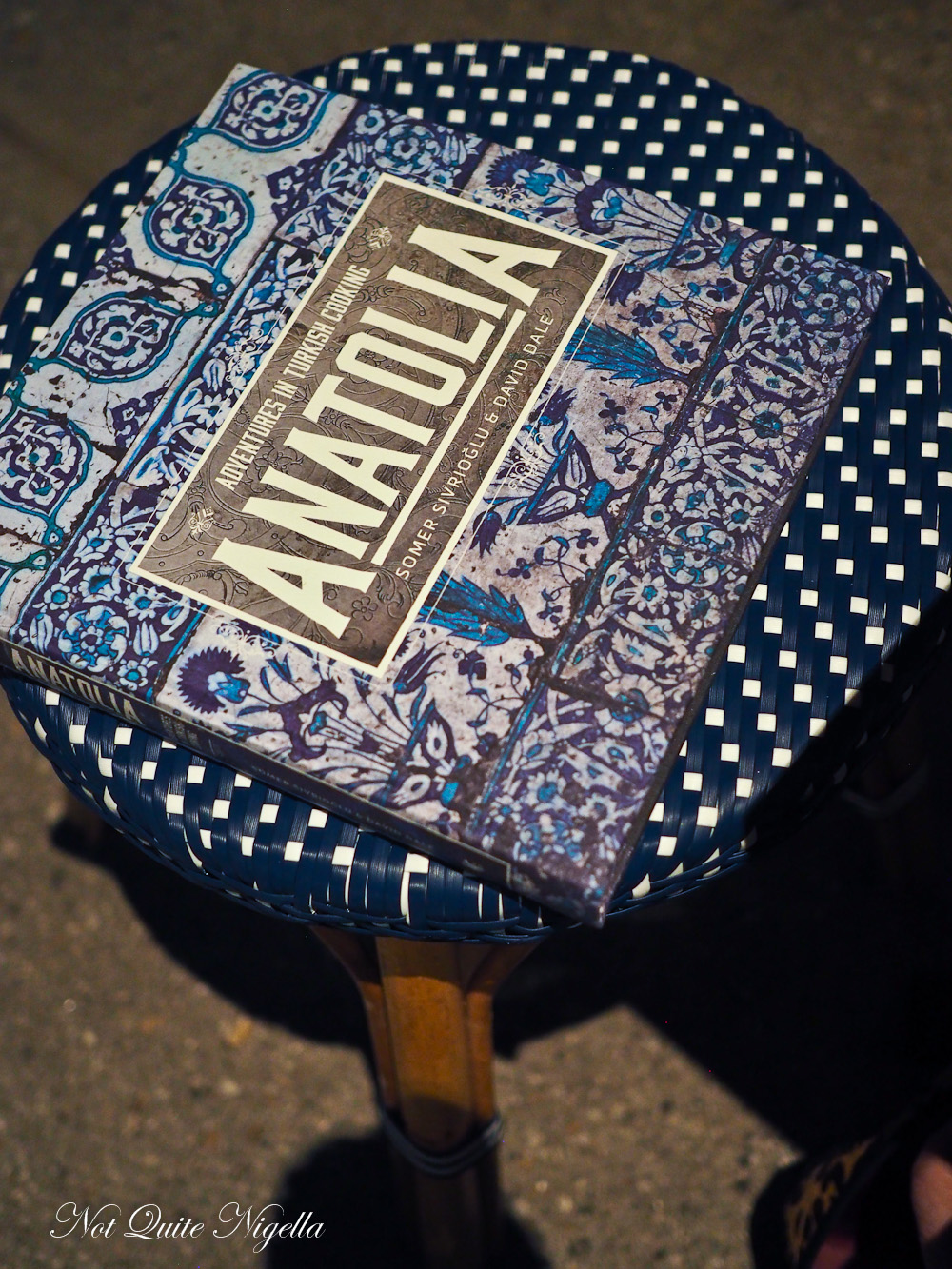 "I'll be there in 5 minutes!" messages JY as the Italian waiter finishes explaining the last few items. After this he brings over a copy of Somer's book to flick through (he sold five in one day). And then JY sweeps in with a breathless, "I'm starving!". 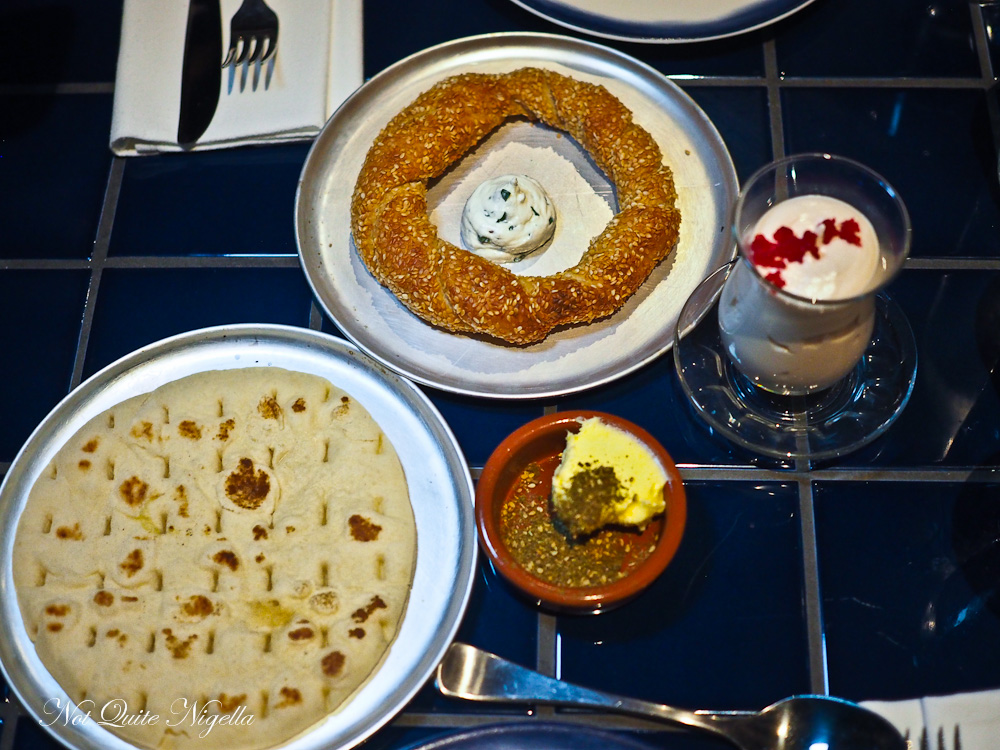 Well luckily, I have a list of things to order from the menu armed by the long conversation with the waiter. The first thing is breads and dip. We order one of the Saj pita bread with zahter spice mix and Pepe Saya butter and one Simit or sesame ring with tarragon labne. These breads are paired with a white cod roe and potato tarama with finger limes served in a Turkish tea glass. The saj bread is served warmed and is delicious with the Pepe Saya butter. 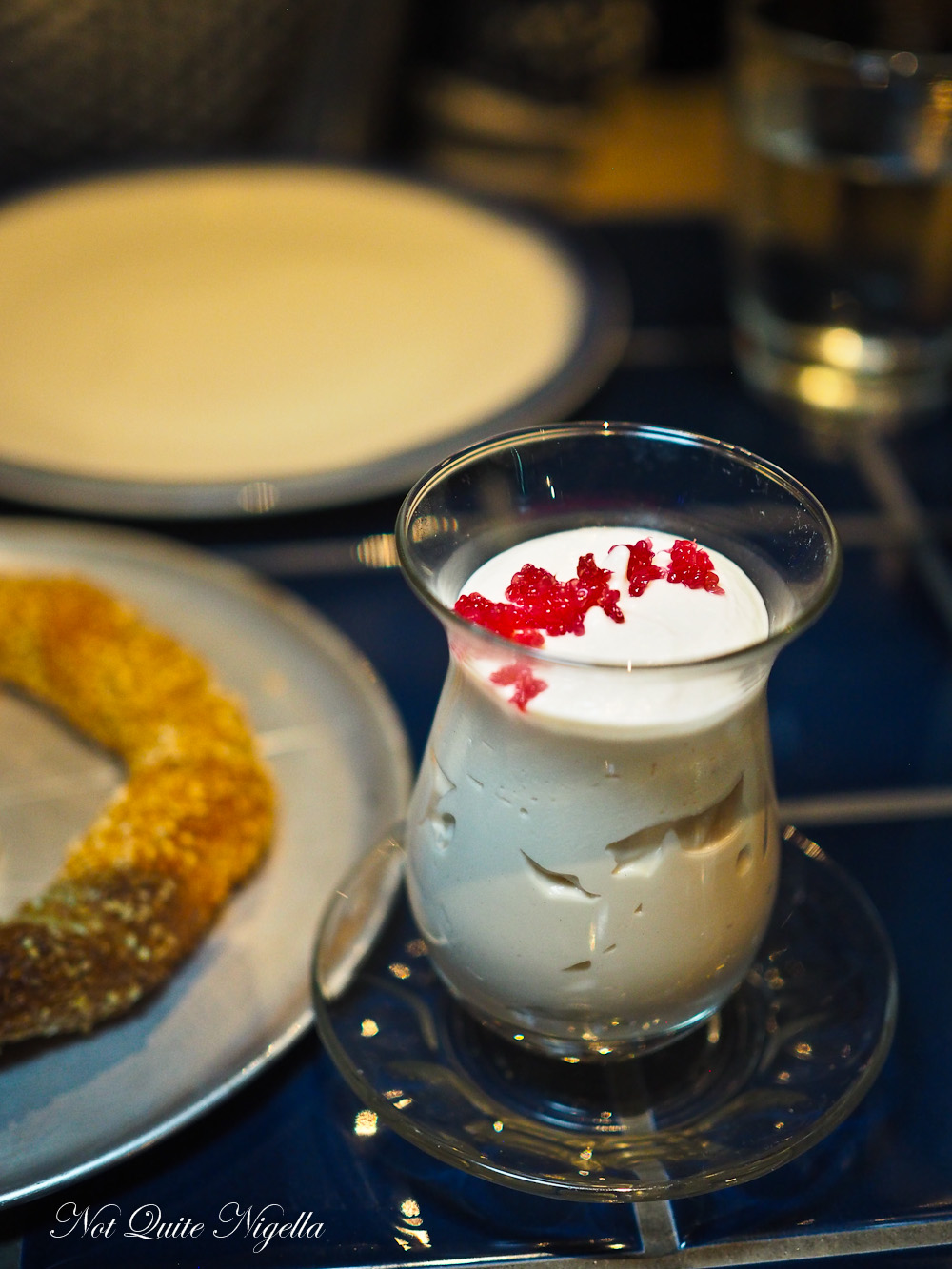 The tarama is creamy but quite strong on a raw onion taste that dominates over the cod roe. The simit sesame ring bread reminds me of a pretzel - chewy with quite a bit of texture to it. In Istanbul they have been selling simit since the 1500's and these are sold from Simit trolleys. One of these trolleys sits at the front of the restaurant. 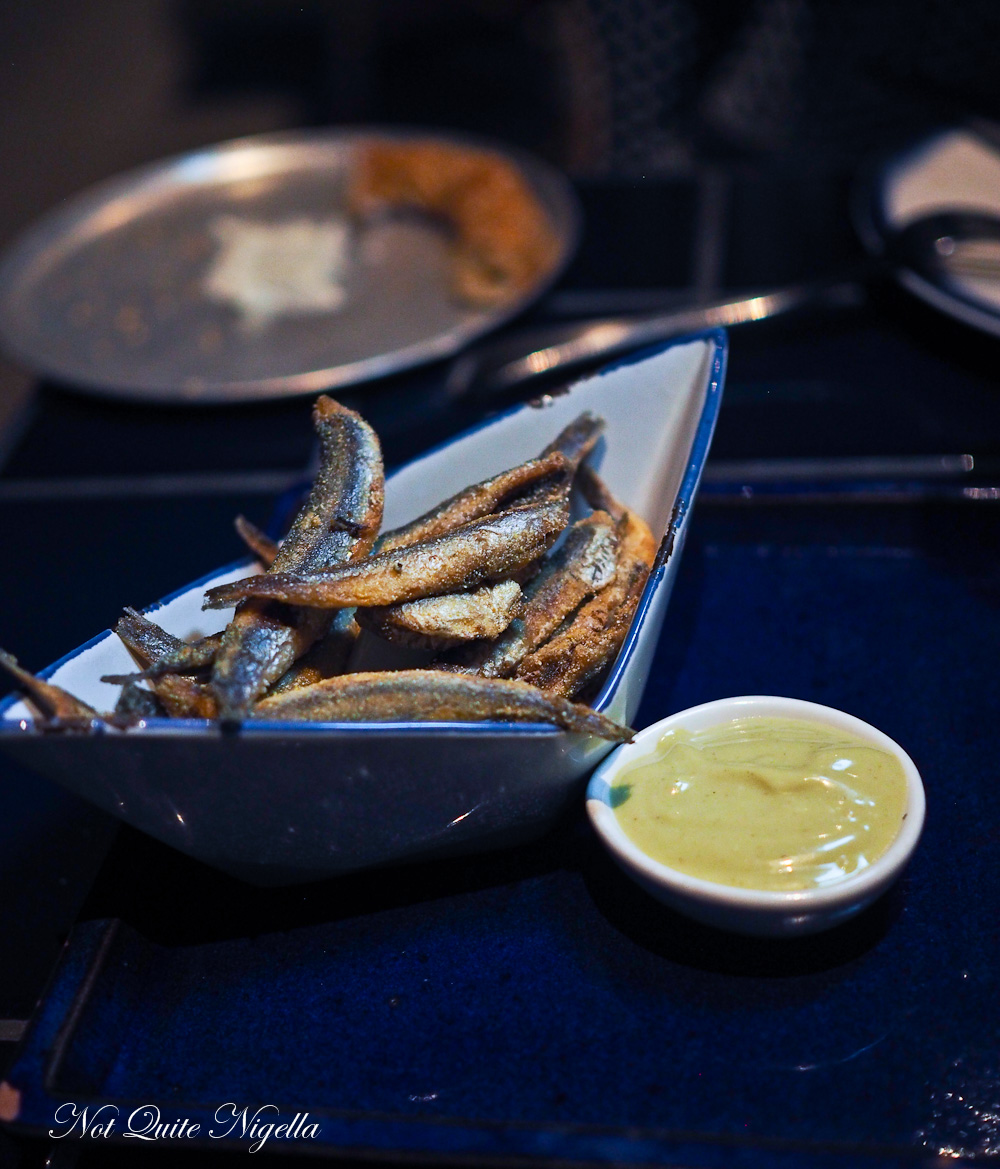 We are told that these are the only fish that they import from Turkey which is where Somer has just left to visit so he isn't in the kitchen. The black anchovies are full of flavour, lightly dredged and deep fried and serve with a piquant green garlic dip. We were talked into them by our waiter but we are glad that we were. We pick them up with our fingers and dip them in the sauce. They'd make a great drink snack. And speaking of, between 4-7pm they have complimentary meze with drinks at the bar. 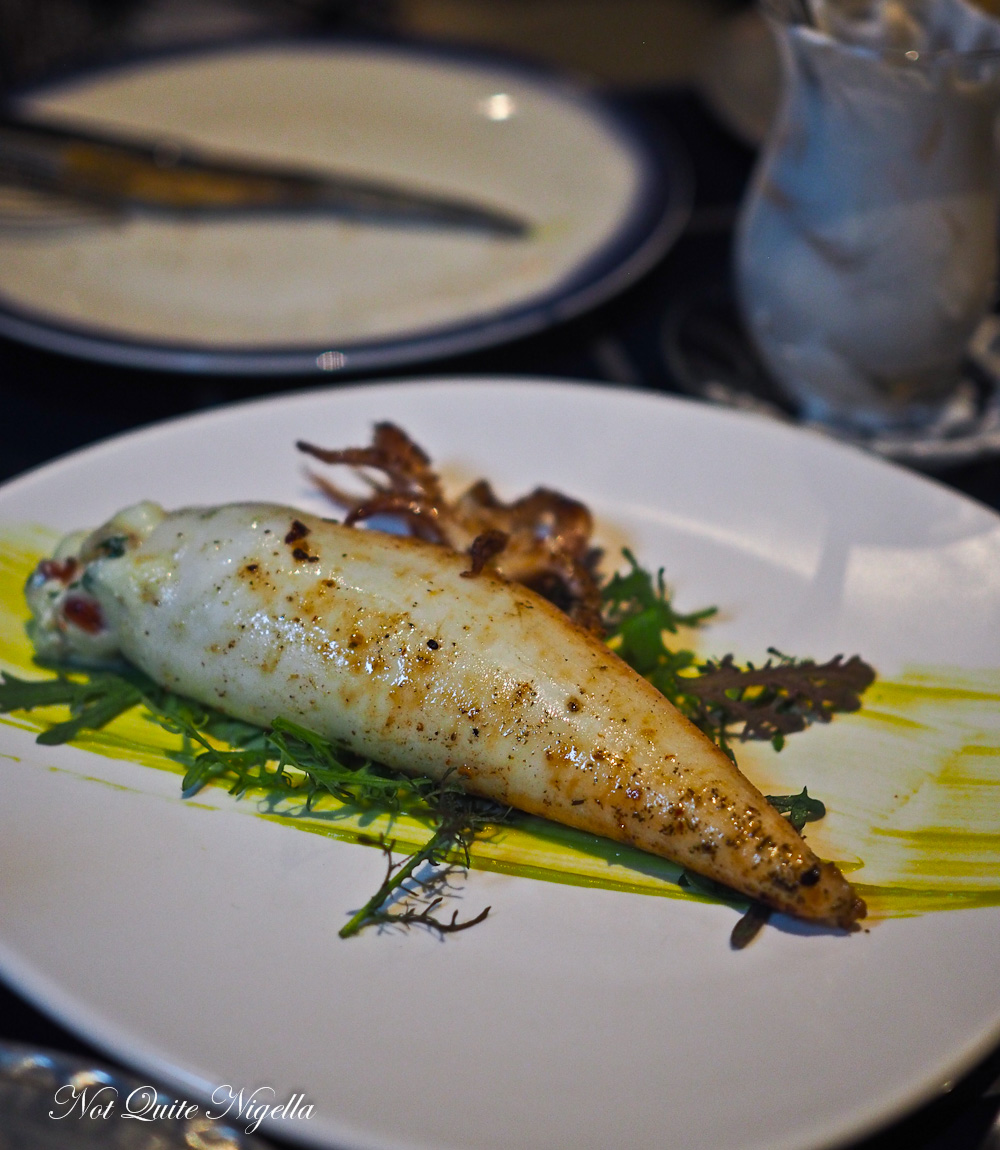 The calamari dolma is filled with pistachio, creamy feta and barberries. It's quite a mild and creamy dish and I kept wishing that there was some chilli or something like lemon to pep it up. I also really didn't feel like the avocado garnish really warranted a mention as it was painted on so thinly that it didn't really add much to the dish. 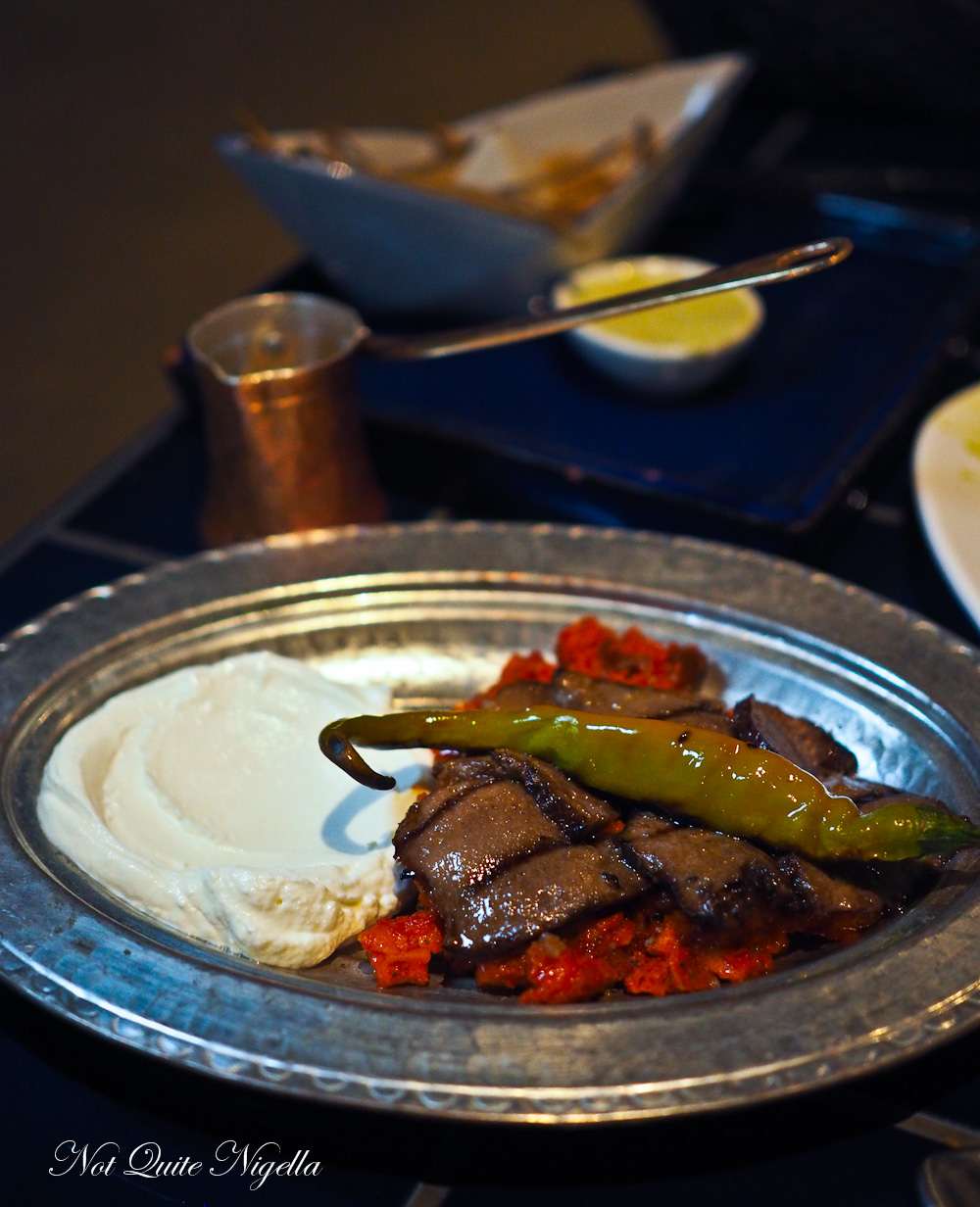 I adore Iskender kebab and it was always my choice with Turkish take out food during university. This is absolutely delicious but it is also very small in size. There are about six small slices of soft beef tongue and a thin layer of Turkish bread with a generous amount of strained yogurt. And the finishing touch is the browned butter poured at the table. But while the flavours were great there was no getting around the limited size of this and JY and I politely offer each other serves of this because in two or three spoonfuls you could really scoop up most of this dish. 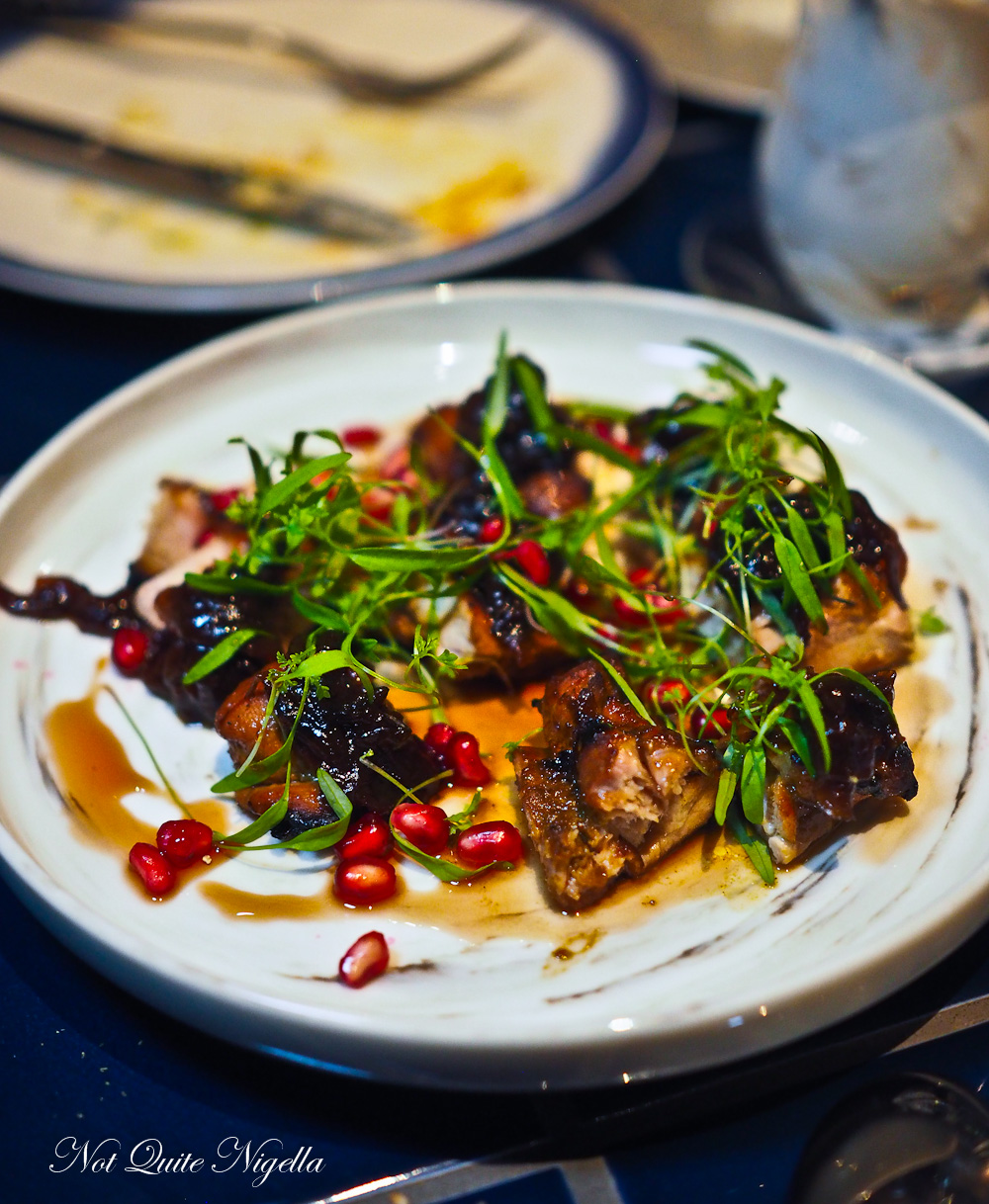 Likewise this is another small dish. I understand that they're meant to be meze or share plates but at the price you would expect something a little larger. The chicken is delicious and this along with the iskender are the most strongly flavoured dishes on the menu which is what we love. 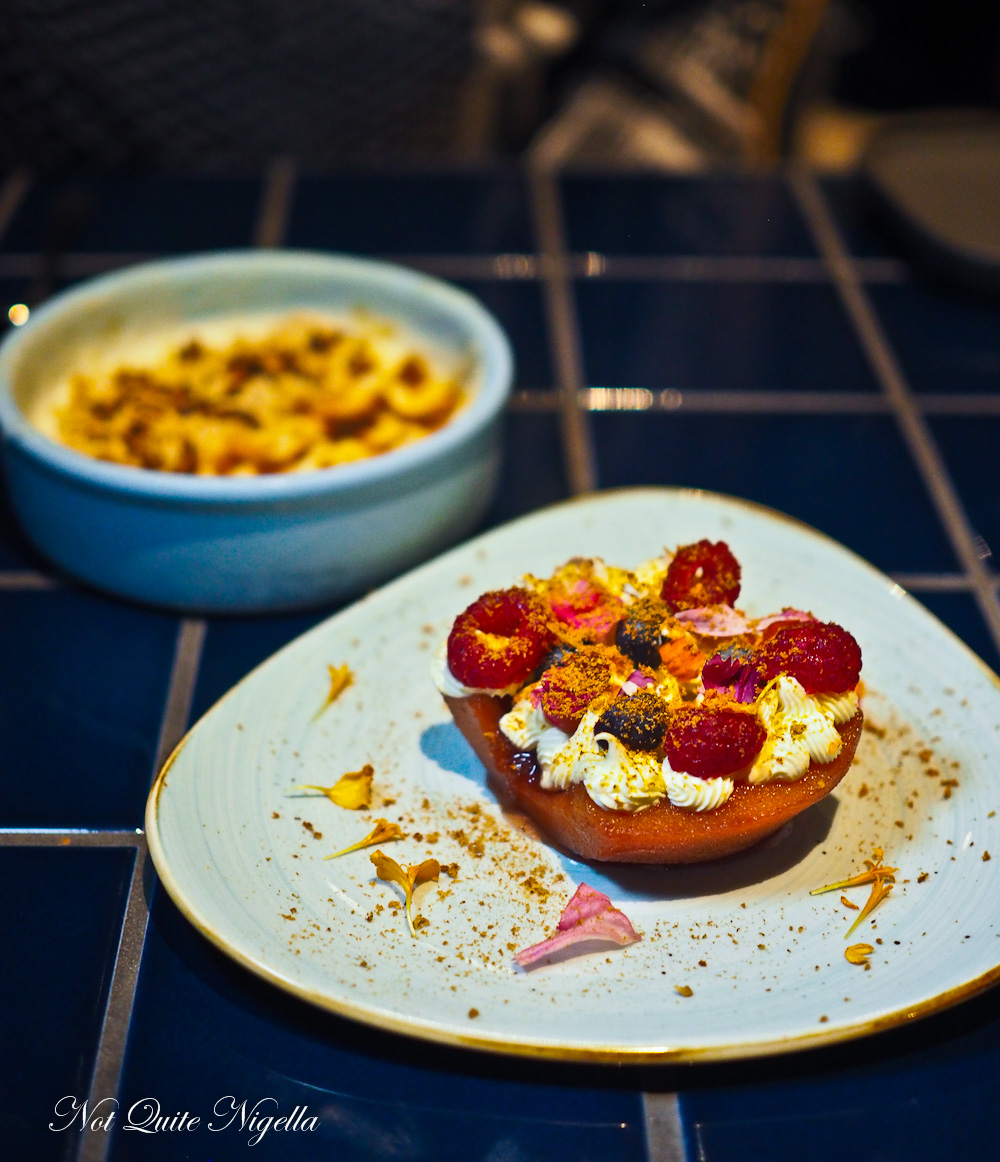 JY and I both both had eyes for two desserts on the menu, the third being a coffee based dessert and neither of us can tolerate caffeine late at night (it's a Turkish coffee, dark chocolate and cardamom ice cream for those of you that can take coffee at night). The quince is a new dish for their Autumn menu and it is sublime. It tastes like an apple or quince turnover yet it is absent of pastry. 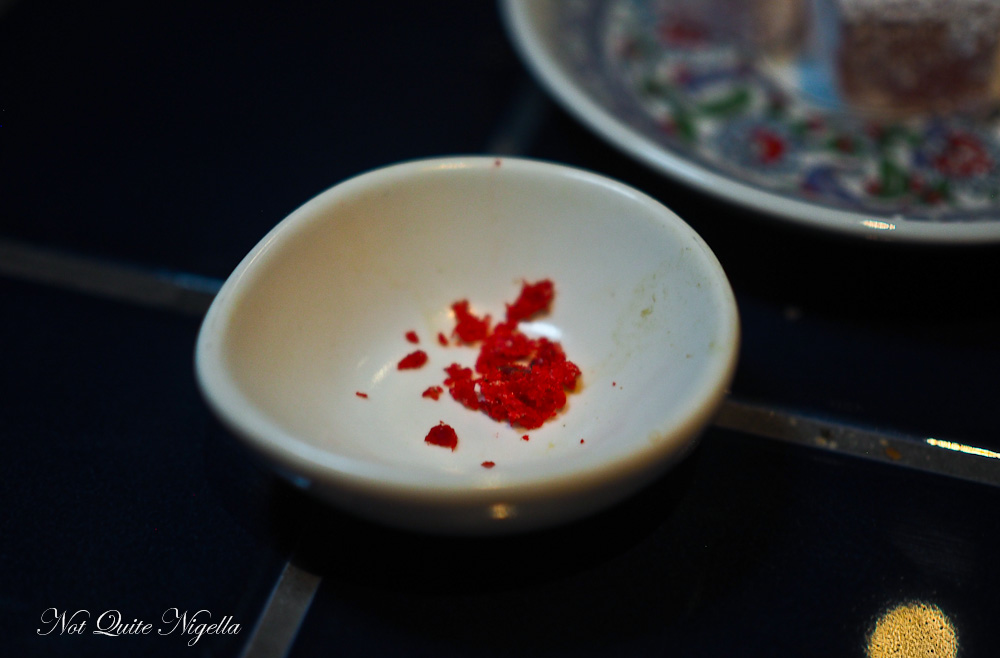 It is made using a spicy red sugar from Turkey that tastes like Red Hots cinnamon candy (we asked for a tiny taste of it) and the quince is cooked with sour cherries and spices with shaved green apple on top. There are also little dabs of mascarpone that replace the traditional clotted cream on top along with berries and flowers. 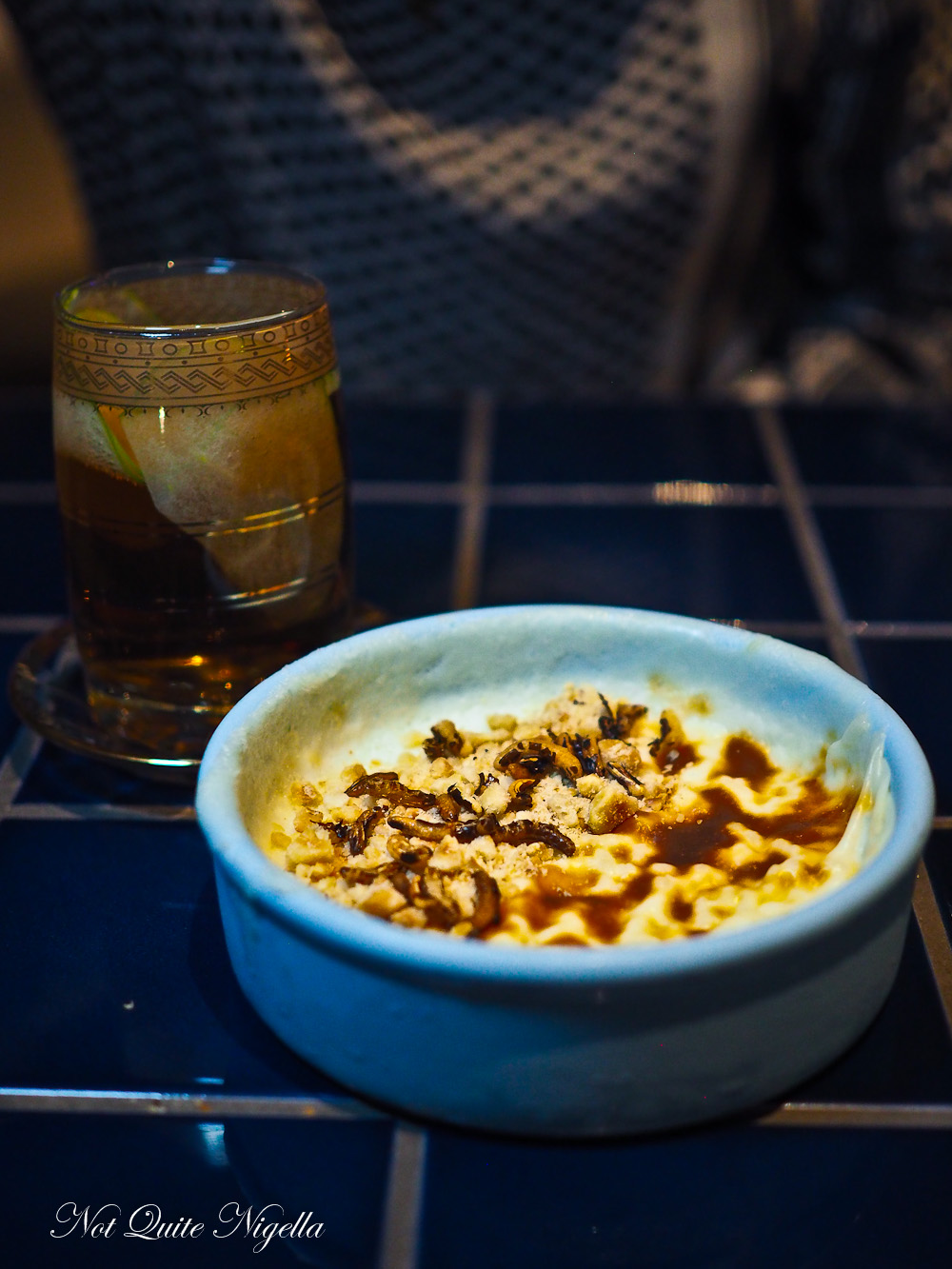 There are two halves of the rice pudding, one with puffed wild rice and hazelnuts and one without. It's a soft, mild, cold dish and JY loves the comforting factor while I prefer the half without the cereal on top. Also following the quince is a hard act too. 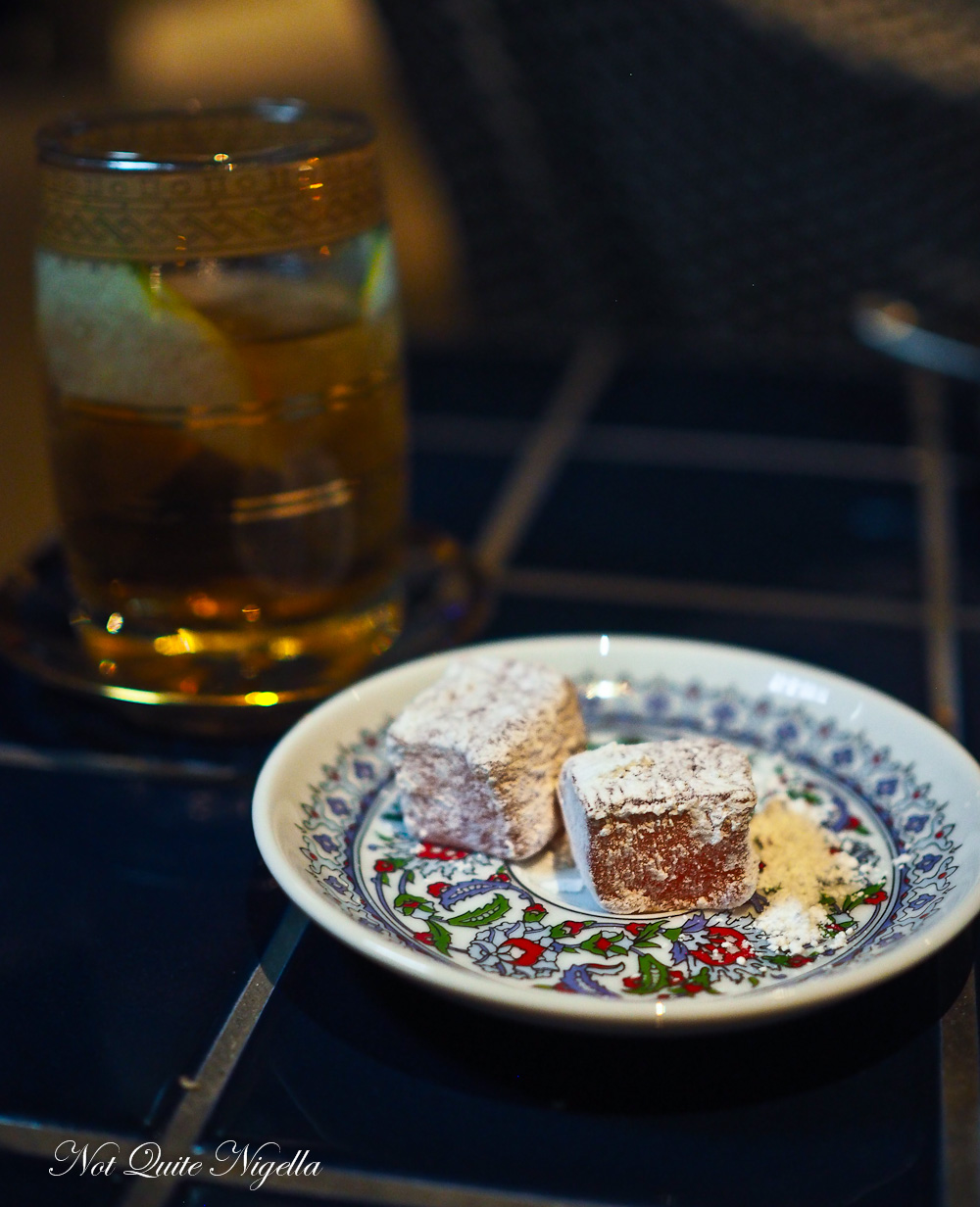 Our waiter slips us a couple of Turkish Delights and they're sweet, thick and chewy and nice with a cup of Turkish apple tea. Then the maitre'd asks us if we have tried the chocolate and almond medjool dates. We are highly suggestible (see the Hamsi black sea anchovies) so we order some. They're filled with almonds and coated in soft chocolate. They're very sweet, probably best served with a strong Turkish coffee rather than after two desserts and Turkish delight and apple tea. 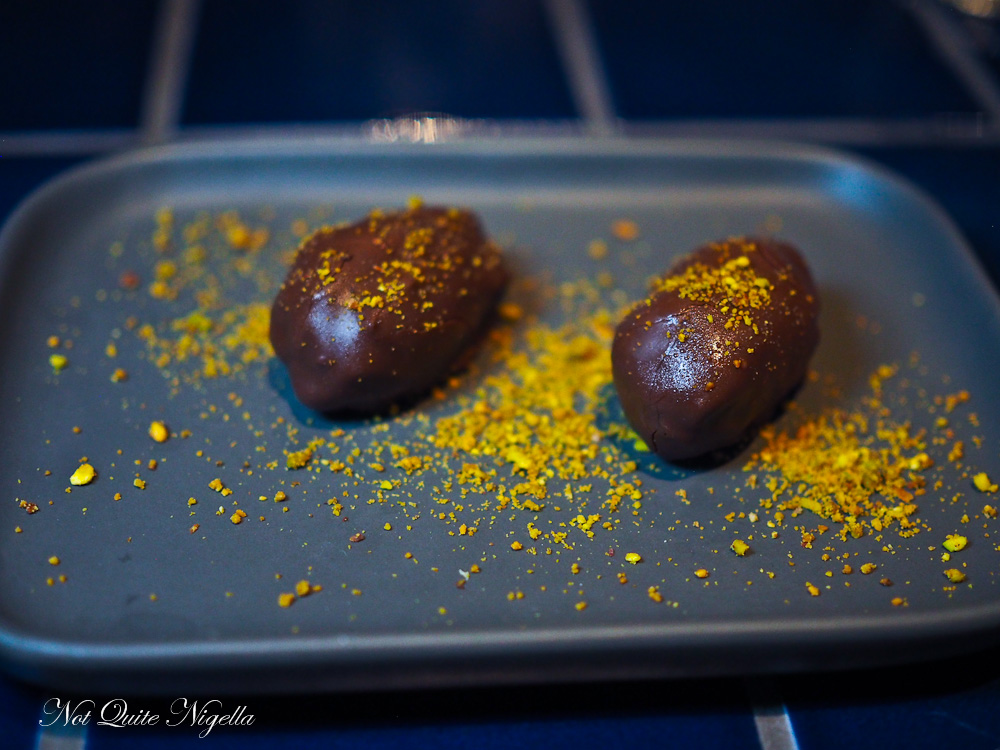 At the end, the bill (that arrives with a bookmark about Gaziantep) is just under $90 a person and that is with us not including any alcohol which is quite high considering the size of the portions. But we are susceptible to an upsell (and they are very adept at it here with really pushing the cookbook too).

So tell me Dear Reader, do you eat out a lot early in the week? Do you go to the movies on a Tuesday night when tickets are cheaper? And do you tend to eat outdoors more during the warmer months? And are you susceptible to an upsell?