Belles Hot Chicken Lands at Barangaroo and a 360° Look! 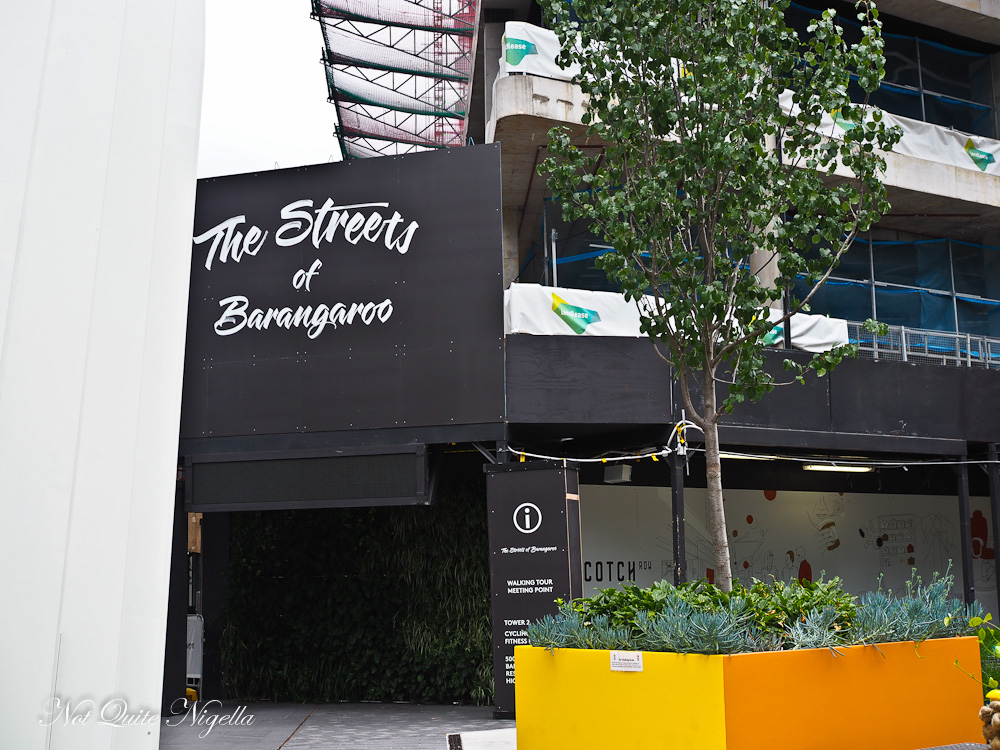 For Sydneysiders who had enviously side-eyed Melbournites and their access to Nashville Hot Chicken there is good news. Sydney now has our very own Belles Hot Chicken! Located in Barangaroo, it is a pop up that lasts until August 2016 and serves their famous Nashville Hot Chicken. With five intensities of heat, do you order "southern" aka mild or do you dare to go "really fkin hot"? 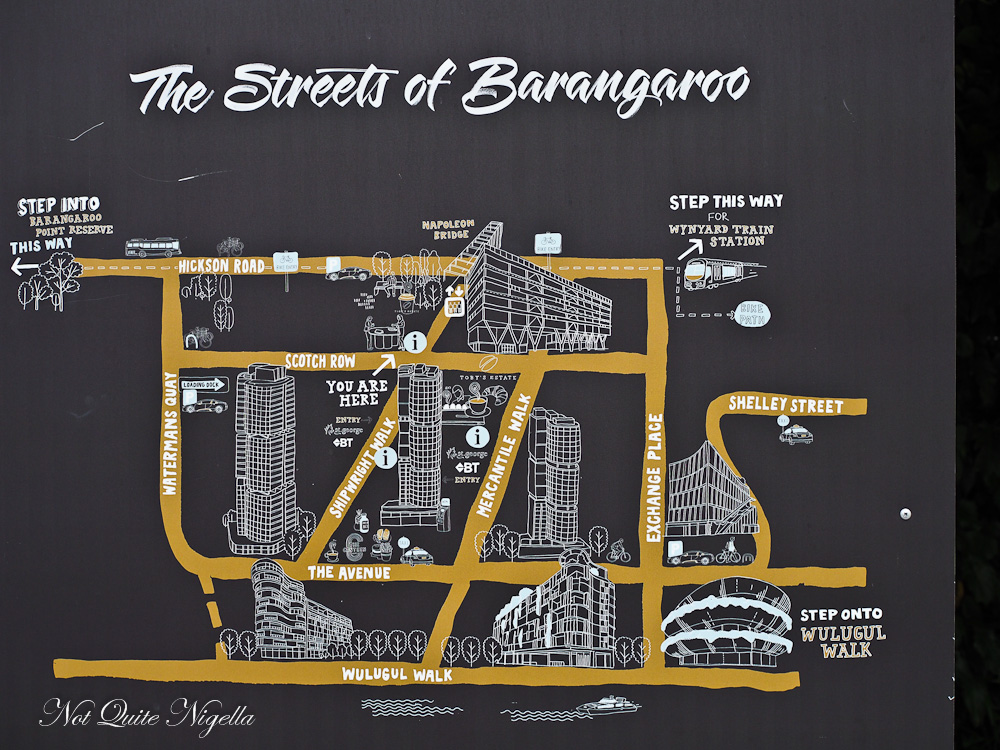 It is our first time visiting the new Barangaroo complex located on the north-western edge of the Sydney CBD. There are three parts of Barangaroo: Barangaroo South, Barangaroo Central and Barangaroo Reserve. Barangaroo was an indigenous Cammeraygal woman who was the second wife of indigenous Bennelong who helped bridge communications between the indigenous Eora people and the British settlers.

I've also got a rather exciting new addition to the blog today. From this year we are adding 360° images to the restaurant and travel reviews so that you can take a look around and explore more. You just click and drag and you can go up, down and left to right. It is truly amazing technology. A big thanks to Viggo (aka jsguy) for taking the images and he and Mr NQN for sorting out the tech side of it! It was no small feat! 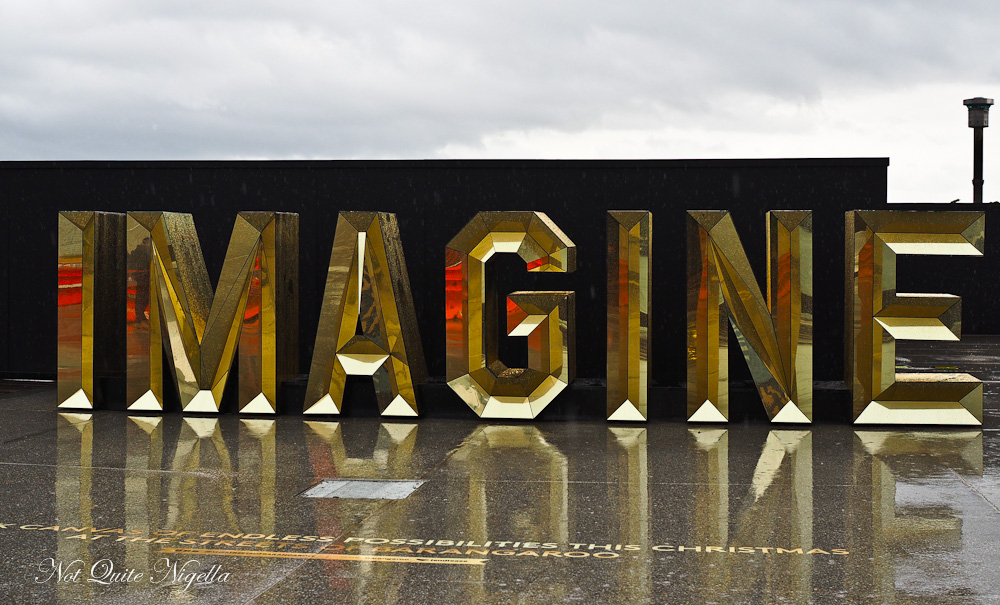 For those of you as directionally challenge (or is it just me?) and because Barangaroo stretches out over half a kilometre, if you're going to eat at Belles or visit the restaurants open as part of the Streets of Barangaroo project in Barangaroo South, you are best to park and enter near the King Street wharf end or Barangaroo South (note: the Barangaroo public car park actually is at the other end at Barangaroo Reserve towards the Sydney Theatre Company and about 10 minutes' walk if you're a slowish walker like me). 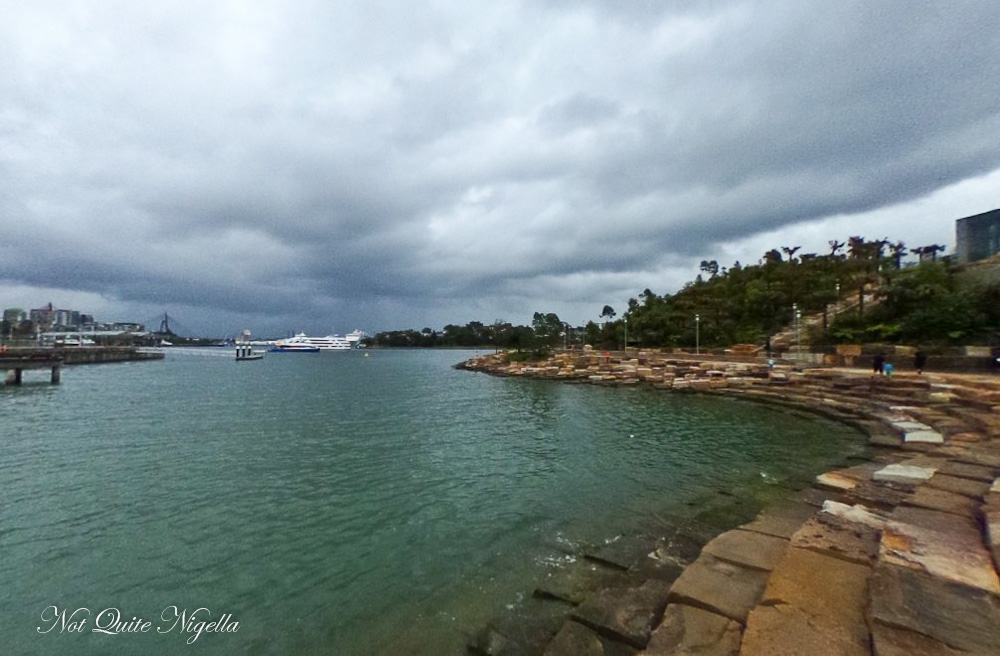 Look for the signs for "Streets of Barangaroo" and walk until you reach the water or Wulugul Walk and then turn left or south. If that sounds too confusing, from the 8th-24th January you can orient yourself with free flying fox rides at The Cutaway (Barangaroo Reserve) as part of the Sydney Festival. 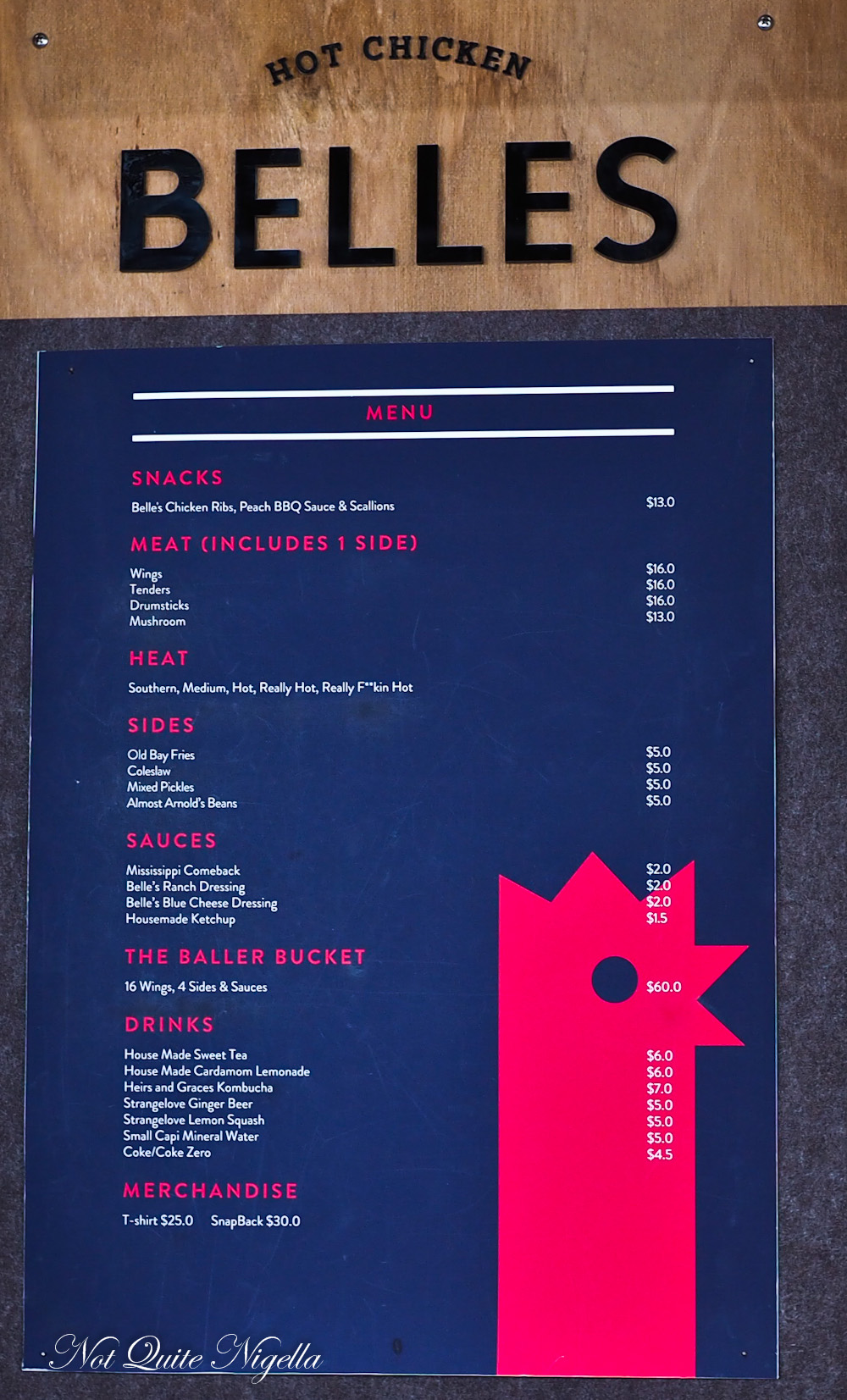 Okay that's the geography lesson over. Onto the food! There are a few places already open up as part of the Wulugul Walk Pop Up. There is Mamak, the Gin & It bar, a Riva Reno cart and Belle's Hot Chicken that specialises in deep fried chicken Southern style or more specifically Nashville style. 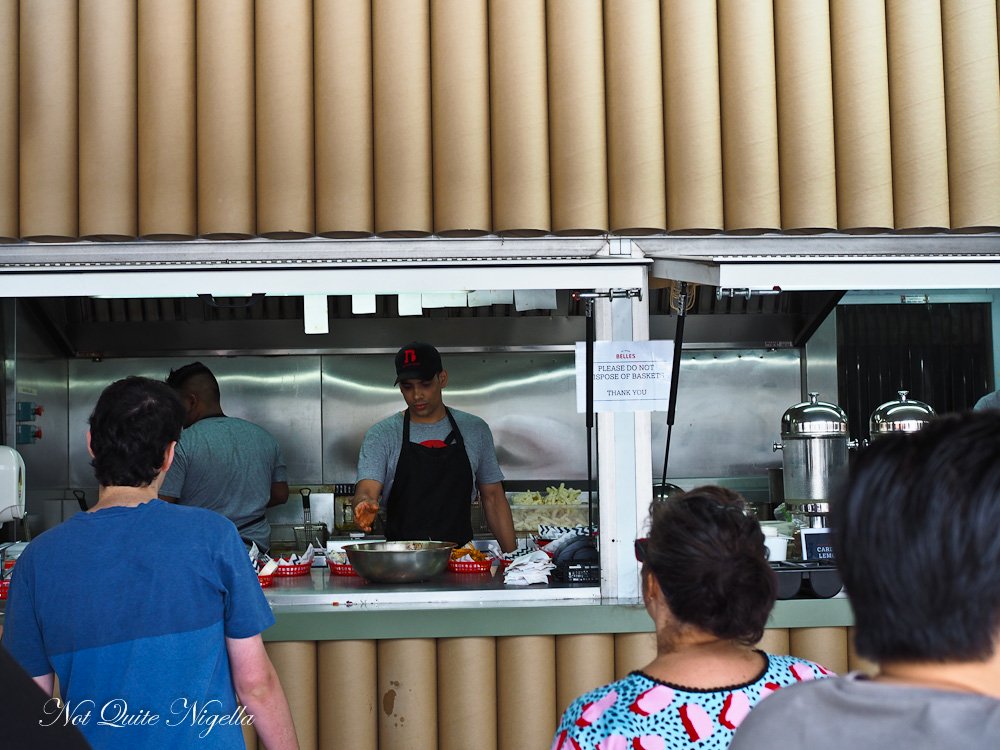 Morgan says, "In end of 2010 I closed my first restaurant in Sydney and went to stage at Husk Restaurant in Charleston South Carolina under the tutelage of Sean Brock. There I feel in love with Southern cuisine and immersed myself in the cuisine and Southern culture. In 2012 Sean Brock asked me to be the Head Chef of Husk Nashville and that's where I was introduced to Nashville Hot Chicken. We would all go to Hot Chicken restaurants often, it's just what you do over there. And the rest they say is history...". 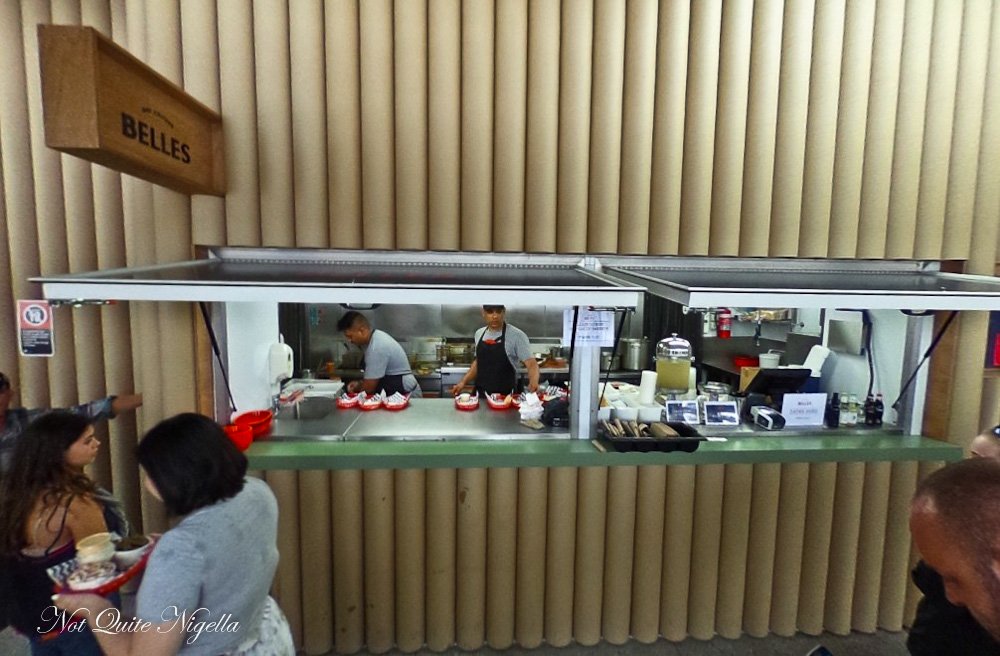 The history of Nashville Hot Chicken is that it was developed as a way for a girlfriend to feed her suspected philandering boyfriend a fiery hot chicken dish. Alas Thornton Prince the wayward boyfriend loved the chicken and it has become synonymous with the capital of Tennessee known for its country music. It was mainly sold in black neighbourhoods and often white Nashvillians would have no recall of it until recently where Hot Chicken has become hot property. 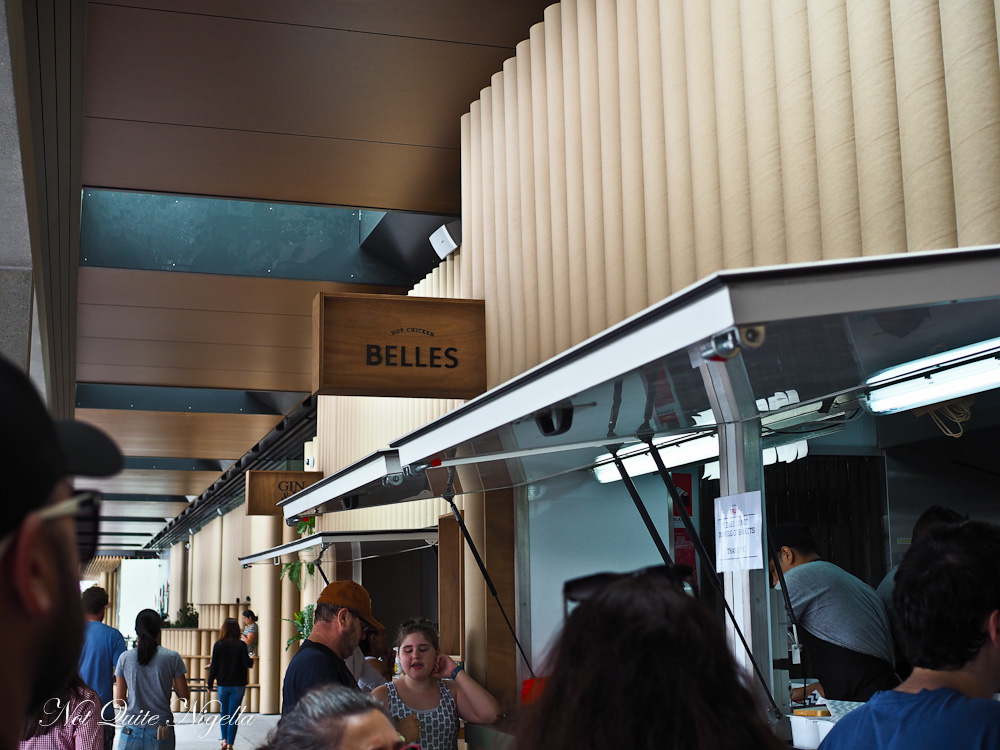 At Belles, New Zealand born chef Morgan McGlone and his team cooks up succulent chicken spiked with cayenne spice borne from his time working in Nashville. On the menu there is a snack of chicken ribs and four types of meat from chicken wings, chicken tenders, chicken drumsticks and field mushrooms. Each of the meats come with one side and there are four sauces that you can also buy. There are also five heat intensities for the chicken from southern (very lightly spicy) to medium, hot, really hot to really f**kin hot (probably self explanatory ;)). The chicken is brine, the amount of time spent brining depends on the cut and then the dip and sauce is applied after the chicken comes out of the fryer. 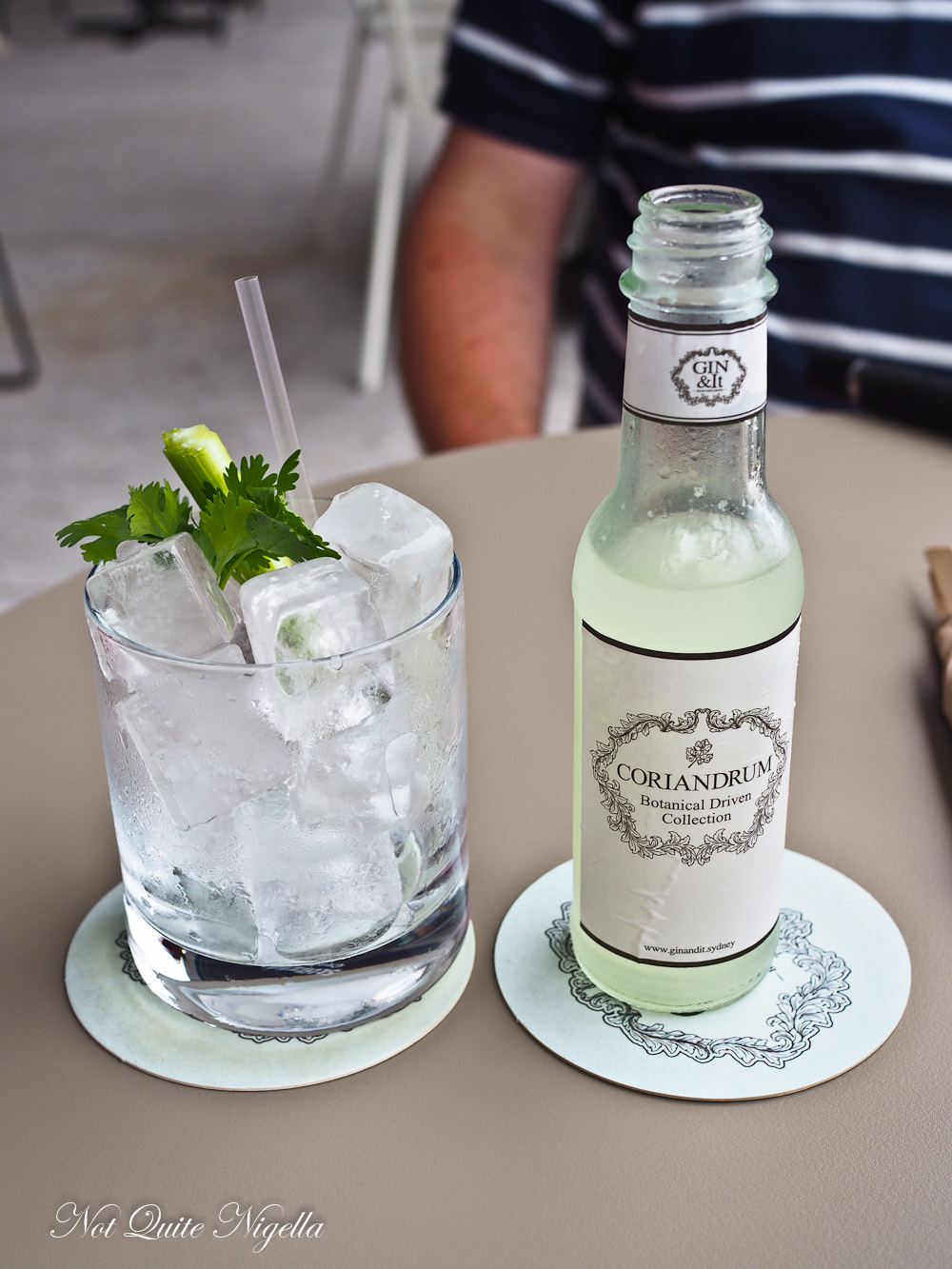 We join the queue, order some food and drinks and then we take a seat with our cardamom lemonade and sweet mint iced tea. We love the cardamom in the carbonated lemonade but the sweet mint iced tea is a strategy that we later learn will help to dampen the fire from the hot chicken. Louise goes for a Coriandrum drink from the neighbouring Gin & It bar. 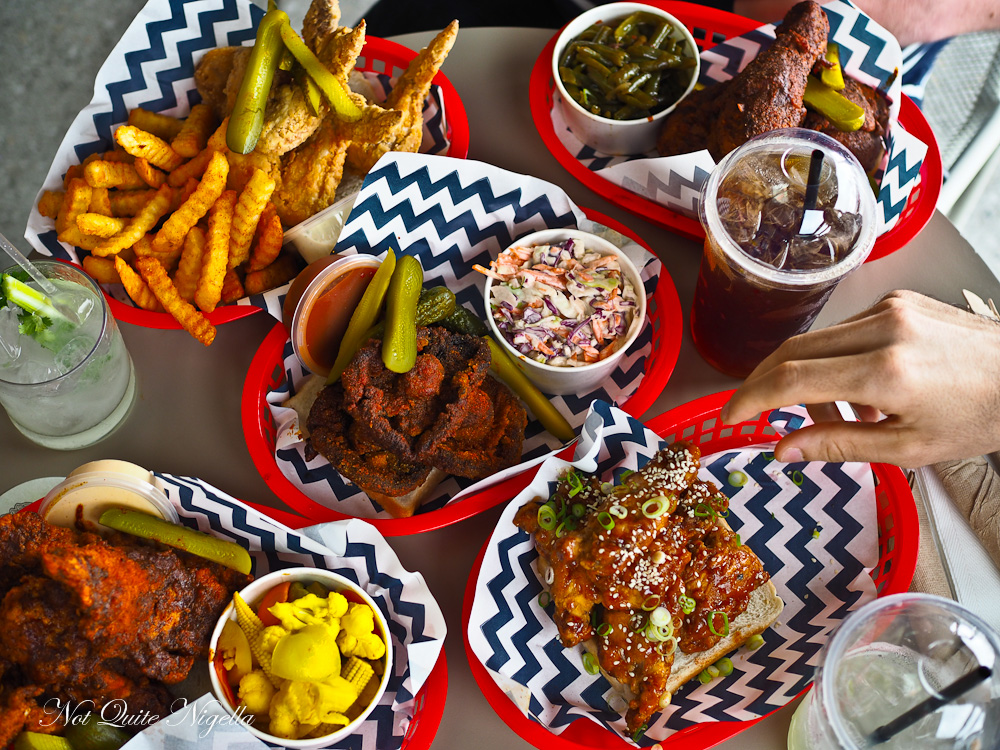 The heavens open and a downpour drenches everyone sitting in the outside benches. We move our table in just as our chicken is ready. There are five baskets in total all gradually hotter in spice. It's pretty easy to recognise what is what in terms of spiciness - the darker the shade of chicken the hotter with the cayenne intensifies. 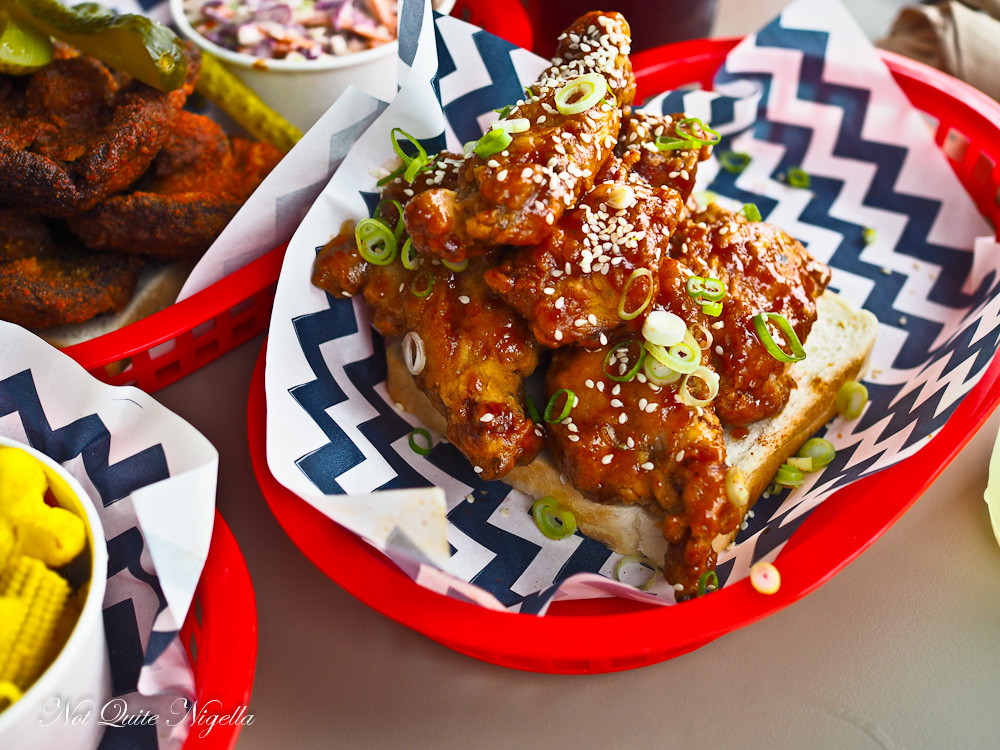 The chicken ribs come on a slice of white bread. With a peach bbq sauce on them that reminds me of an Asian style sauce with sesame and scallions they're deep fried and then served in a luscious, slightly sweet blanket of sauce. 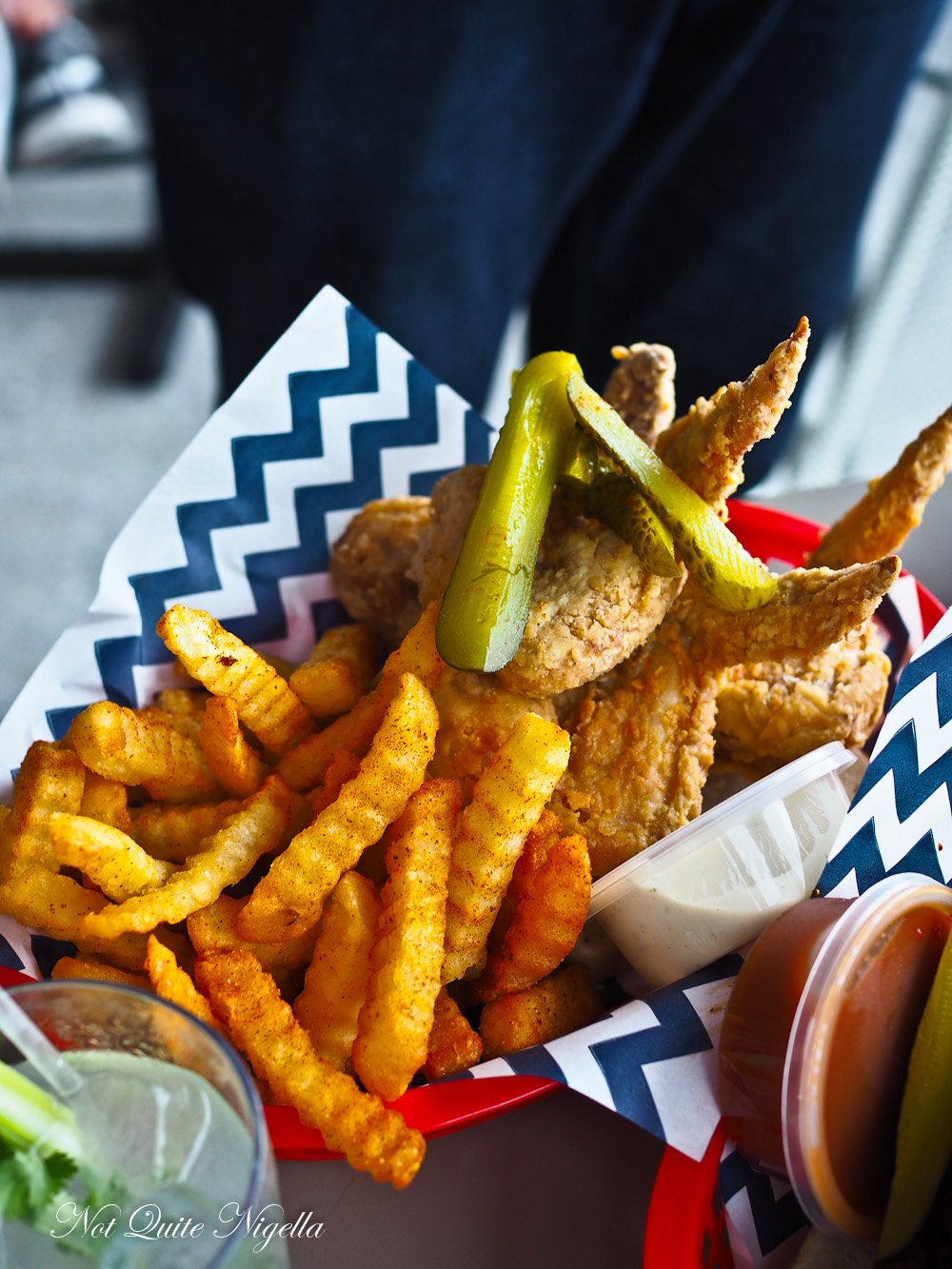 I then try the wings that come with Old Bay spice dusted crinkle cut fries. There's just the slightest tingle of spice with these but they're crunchy and juicy. Chicken wings or chicken on the bone are my favourite pieces as they have so much flavour and juiciness. 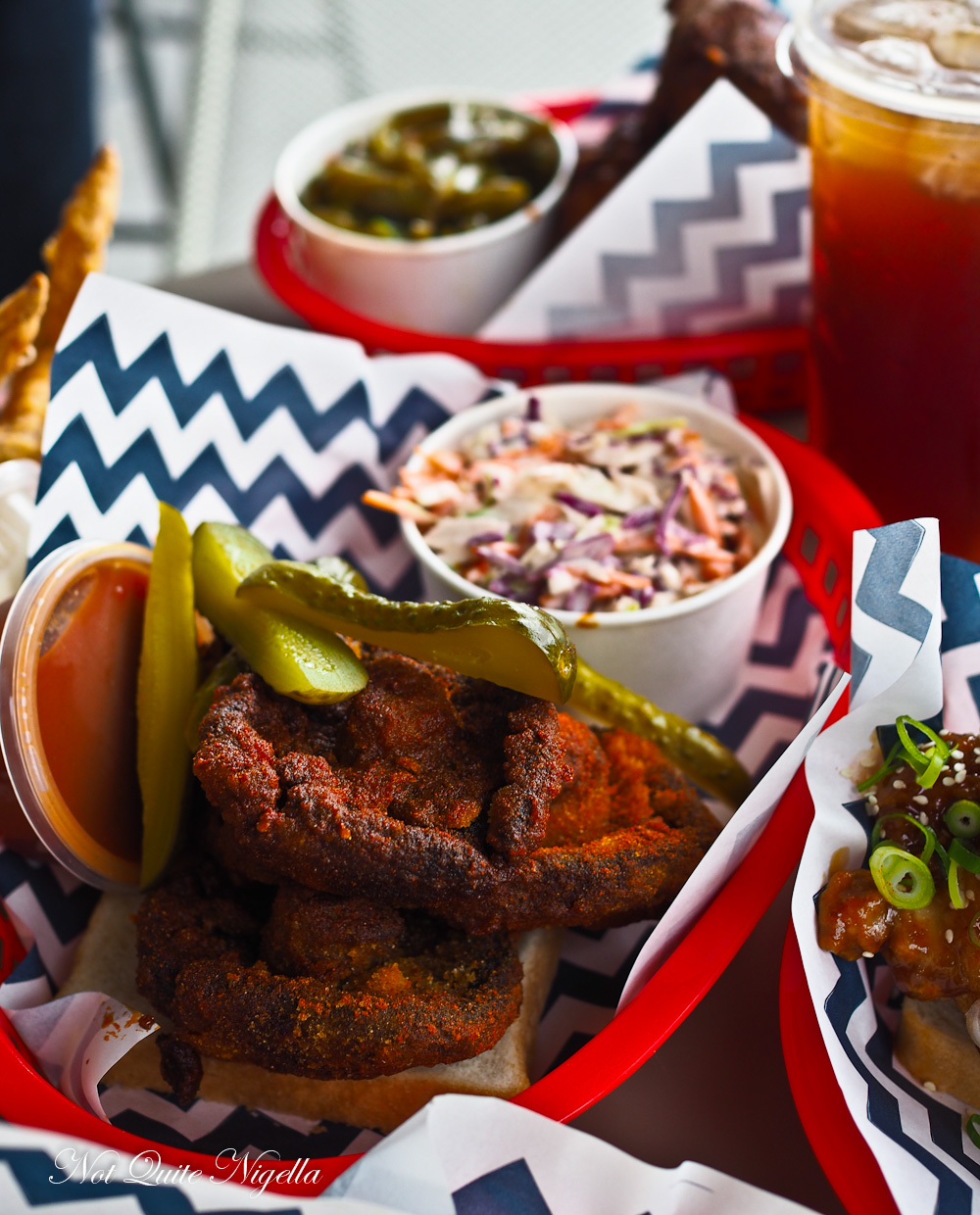 We thought we should try the vegetarian option. The field mushrooms have a medium intensity of spice. They're quite oily and we are all happy to go back to the chicken. Mr NQN who isn't feeling well eats the mushrooms and the bread. They're helped along with the housemade ketchup which is as far from bottled as you can get and is my favourite with the chicken of all the sauces. 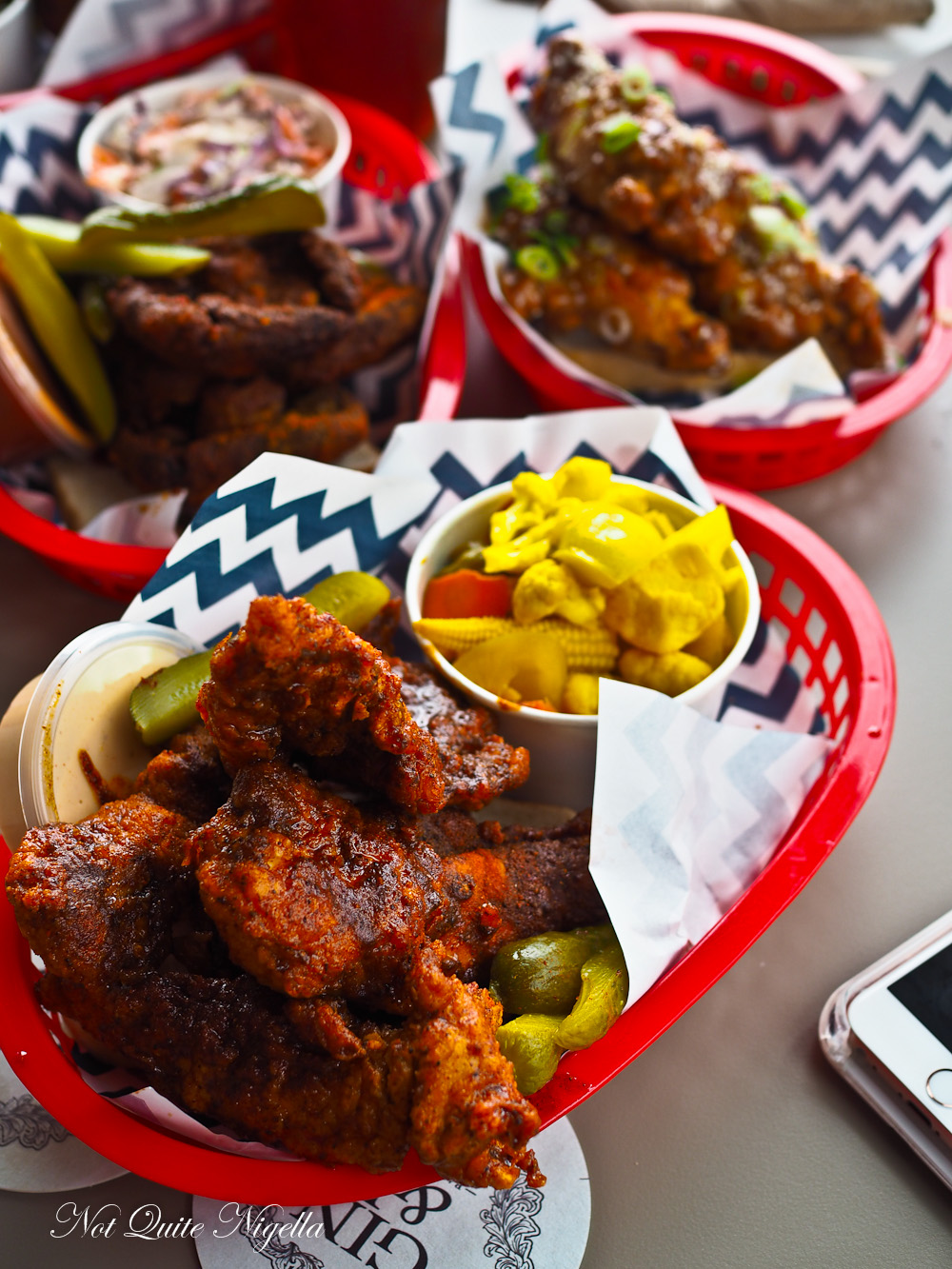 And then we step up a little. The chicken is noticeably darker from the pale Southern wings and these are fiery hot. And we're aren't even at the hottest type yet! The tenders are boneless breast pieces, admittedly not my favourite piece as there is no juicy bone to nibble on. We also try the blue cheese sauce (en pointe) and the ranch (nicely tangy to counter the heat). The Mississippi comeback sauce is so named because it is so good that you come back for more. It's spicy and creamy and like a chipotle mayonnaise crossed with a thousand island dressing with a bit more to it than that (it's quite addictive for dipping). It originally hails from Jackson Mississippi from a restaurant called "The Rotisserie". 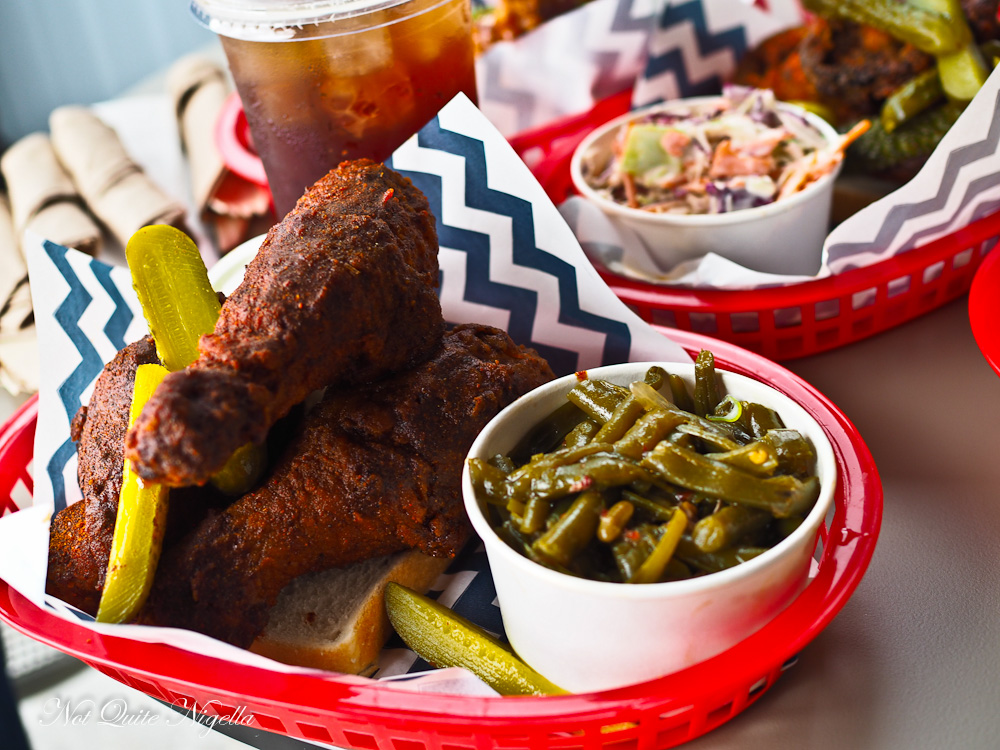 Viggo braces himself for the hottest item on the table. He eyes off the "Really f**kin hot chicken" drumsticks that just happen to be right in front of him. "I should have ordered the Coke," he said but he was reluctant to pay $5 for a teeny tiny bottle from the bar. Mr NQN hands him the mint tea and it ends up being his savior. I pick up a drumstick and take a bite. My mouth is actually on fire but not in an unpleasant way if that makes any sense at all because I could still taste the chicken. 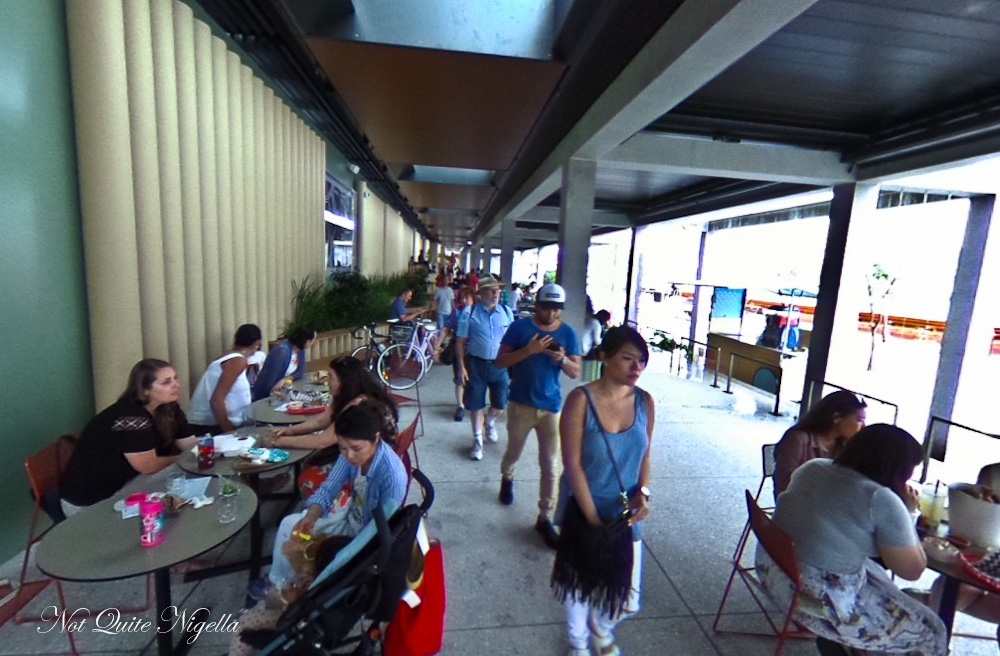 Maybe it's the juicier cut or maybe they got the order around the wrong way (although the very, very dark shade of coating on the drumsticks seems to suggest that it is indeed the "really f*king hot" one). But I love this and the Southern fried chicken wings perhaps because I love chicken on the bone. Viggo chases this with a sip of iced mint tea as beads of sweat glisten on his upper lip. Chicken over we try some soothing, creamy and crunchy coleslaw, crunchy piquant pickles and soft "Almost Arnolds" green beans based on the Nashville restaurant Arnold's Country Kitchen's recipe. 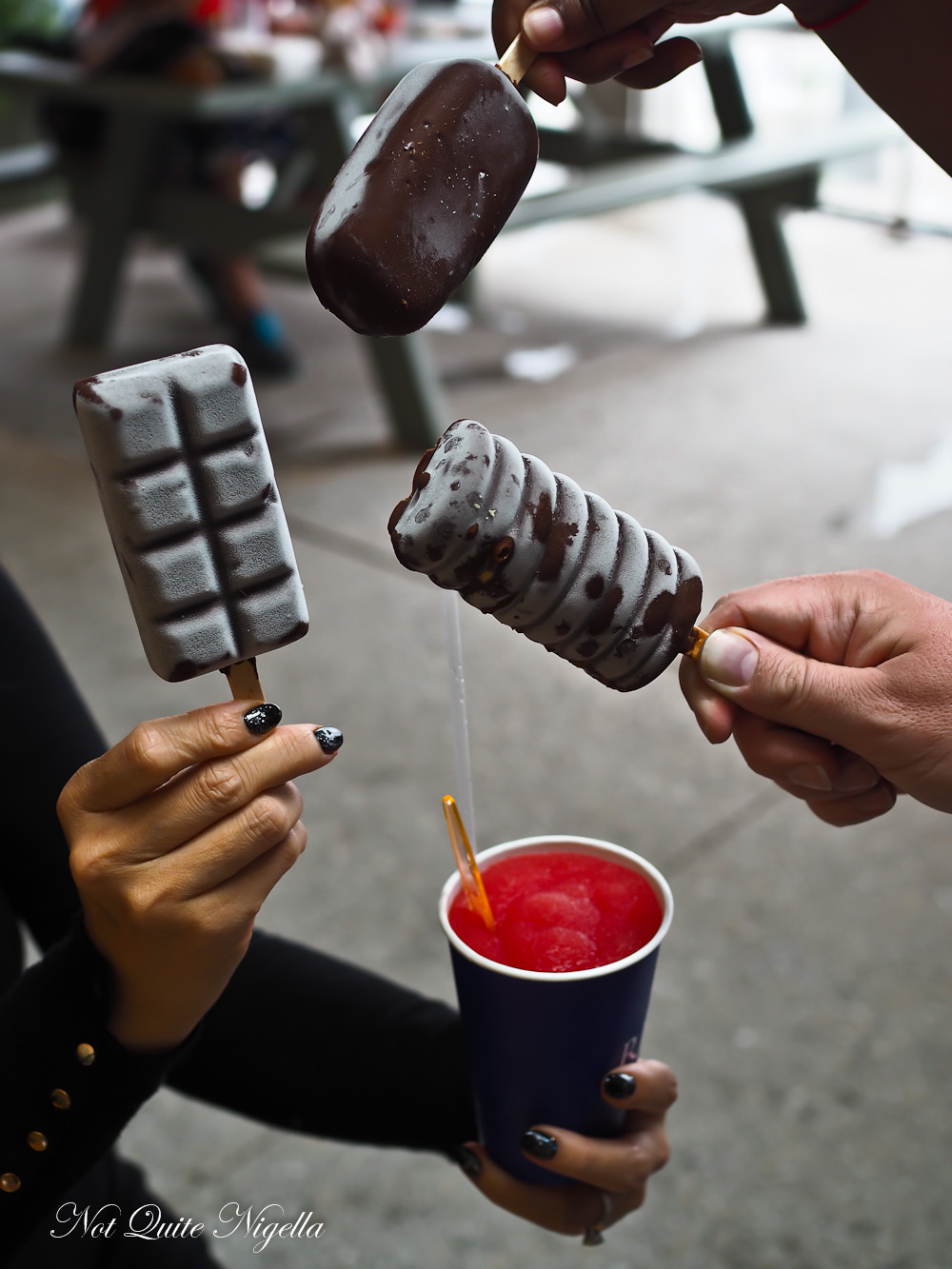 Dessert come from the nearby gelato cart by Riva Reno-there are a choice of hand crafted gelato sticks in Sri Lankan coconut with coconut shavings, salted caramel, fior di panna and Cioccolato. I go for the chocolate simply because it looks like a chocolate bar. It's very rich and chocolatey but I think Viggo's choice of the salted caramel is better. Mr NQN goes for a watermelon granita because he is a fruit nut and it's very sweet but refreshing. We wait for the rain to abate and watch the world go by.

So tell me Dear Reader, which heat intensity would you try? Would you go for "really f**ing hot"? And are you particular about your cut of chicken? Do you have a favourite cut? And what do you think of the 360° images? 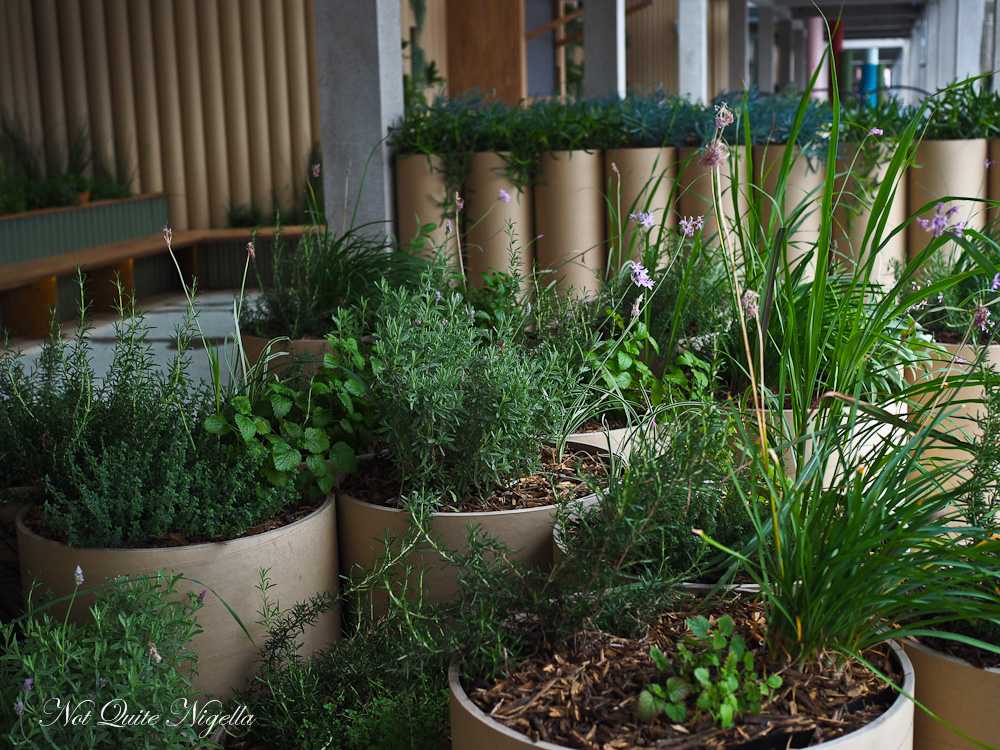