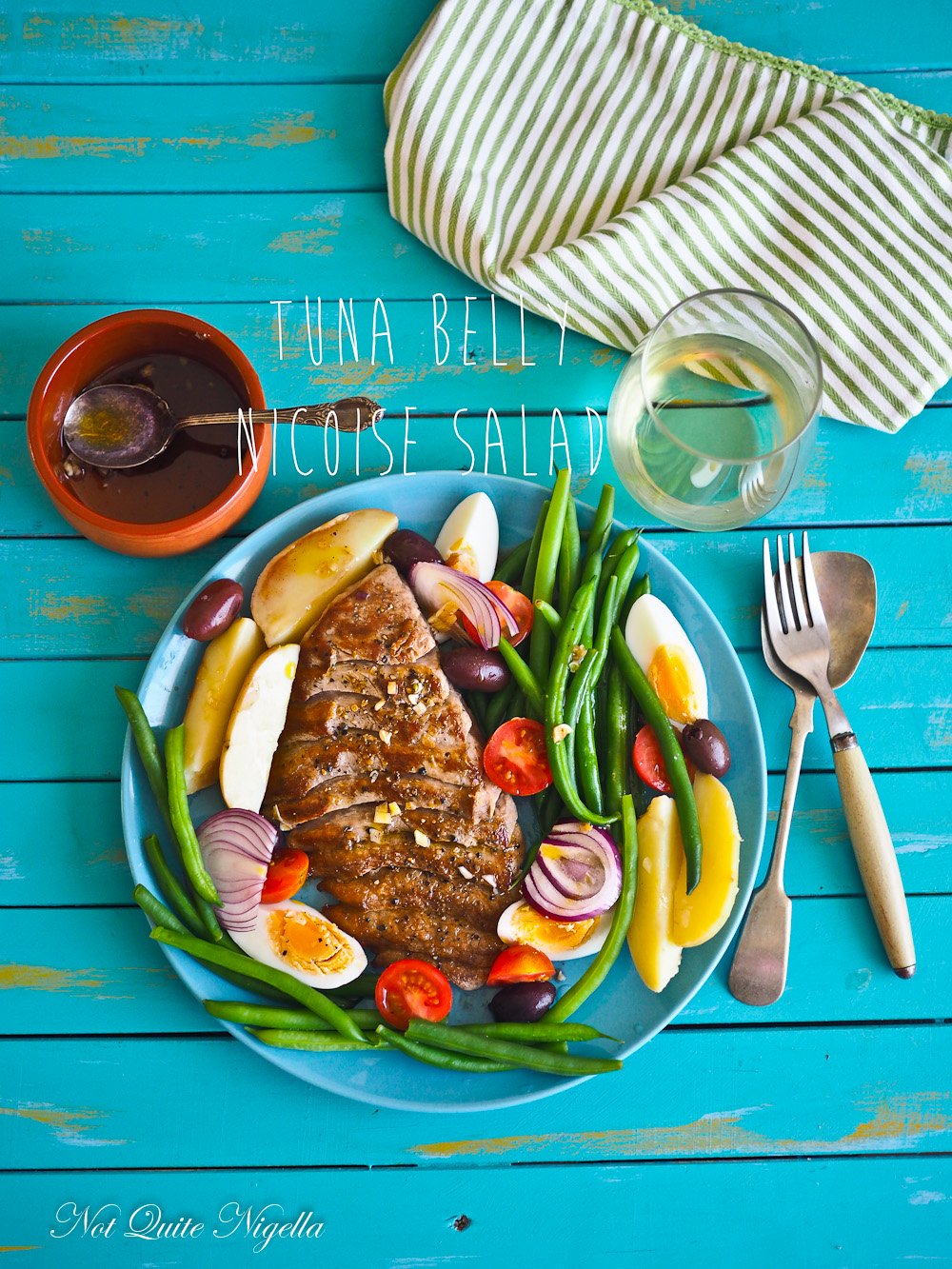 An updated take on the classic Nicoise salad this version features a wonderful cut of tuna belly. Usually it's one of the most expensive cuts for sushi and sashimi if you're talking bluefin tuna which is best eaten raw but if you have a fishmonger that breaks down whole yellowfin tuna then you can have a delightful, economical treat on your hands. The tuna belly looks like it has been sliced but a simple treatment of salt and pepper is all that this beautiful cut needs.

I love my weekly visits to Paddy's Markets to buy fruit and vegetables and I always go to have a look and see what the fishmonger is selling. He usually has something interesting and I love seeing new cuts and fish as I like to cook something that I haven't tried before. Of course it doesn't always work, I've had a few "meh" meals but most of the time it ends up being good. 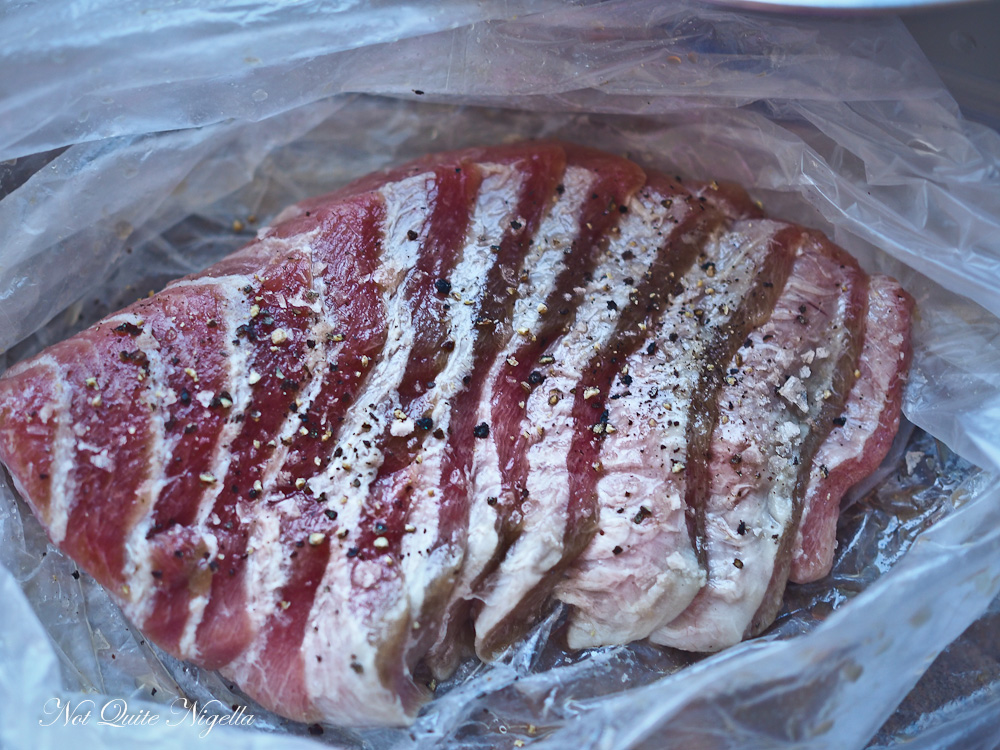 That week he had something in a tray that looked like a steak cut on the diagonal like they do at some restaurants. It was a tuna belly. If you've ordered this at a sushi or sashimi restaurant you'll know how expensive it can be but the cut was just $5 for a 250g/8.8oz fillet. Having eaten a lot of meat over the past few weeks we wanted a lighter respite. I decided to make a Nicoise salad with the tuna belly (sometimes made with canned tuna but Mr NQN hates canned tuna). The belly was layered with fat that made it appear as though it was already sliced. Once cooked, this fat melts and you get the most tender, luscious tuna as a result. It is so mouth watering and succulent that it mimics salmon in the fatty texture.

As expected the Nicoise Salad comes from Nice and makes use of the Mediterranean produce from this warm and idyllic area in the South of France. In terms of this salad, Nice's former mayor vehemently eschewed the use of cooked vegetables in a Nicoise salad although it is commonly found outside of Nice with these ingredients. I have to admit that I like the use of potatoes and beans in this salad as it makes it more substantial and better suited to a standalone meal. But traditionally only crisp, fresh raw vegetables are used. 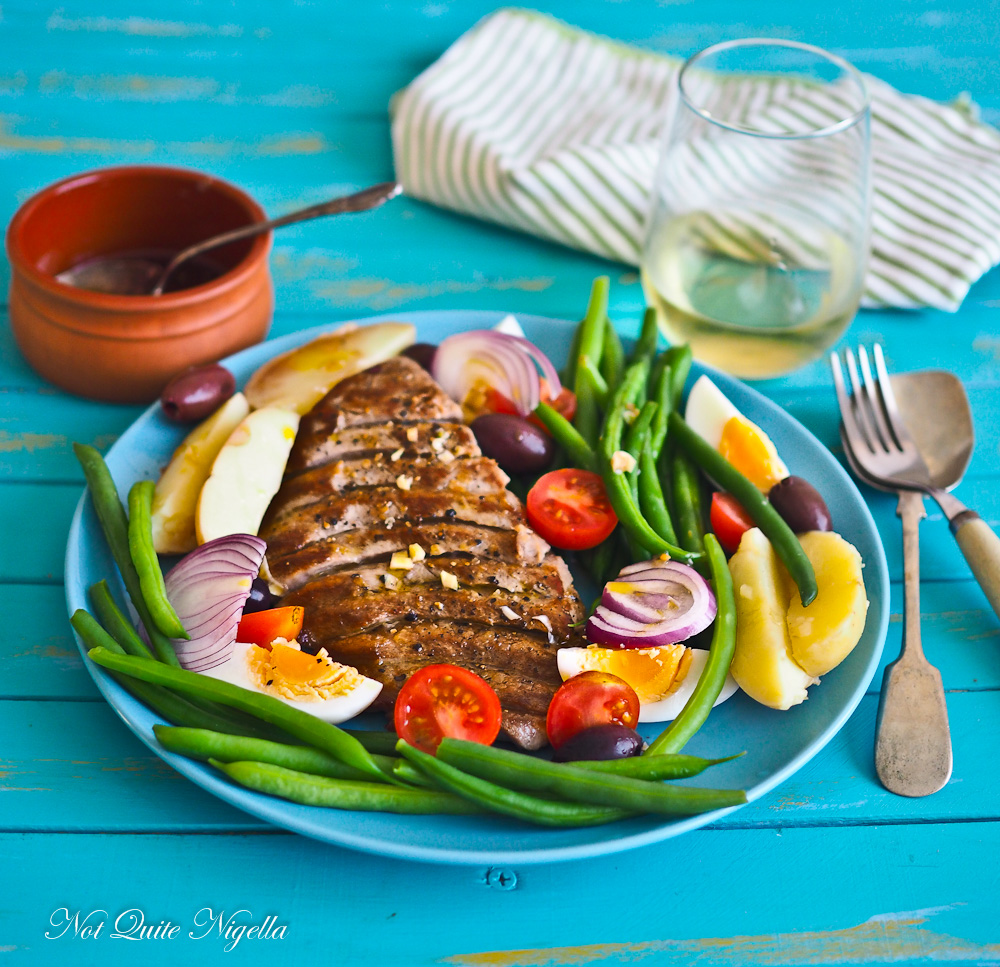 When the recent terrorist attack occurred in Nice I thought how nobody would have seen it coming. Nice is all about holidaying and having fun in the sun and the French Riviera. A threat would have been the last thing people were expecting. Their guard would have been down and I thought of the people that I met-the nice gentleman antique dealer who saw how enamoured I was of his box of porcelain figurines and who slipped one in my bag with a smile. All I remembered were the kind people I met.

So tell me Dear Reader, have you ever tried this belly cut? Do you like trying new cuts or foods? Have you ever visited Nice? What are your thoughts on everything that is going in the world today?

Cooking time: 5 minutes (if your vegetables and eggs are already cooked) 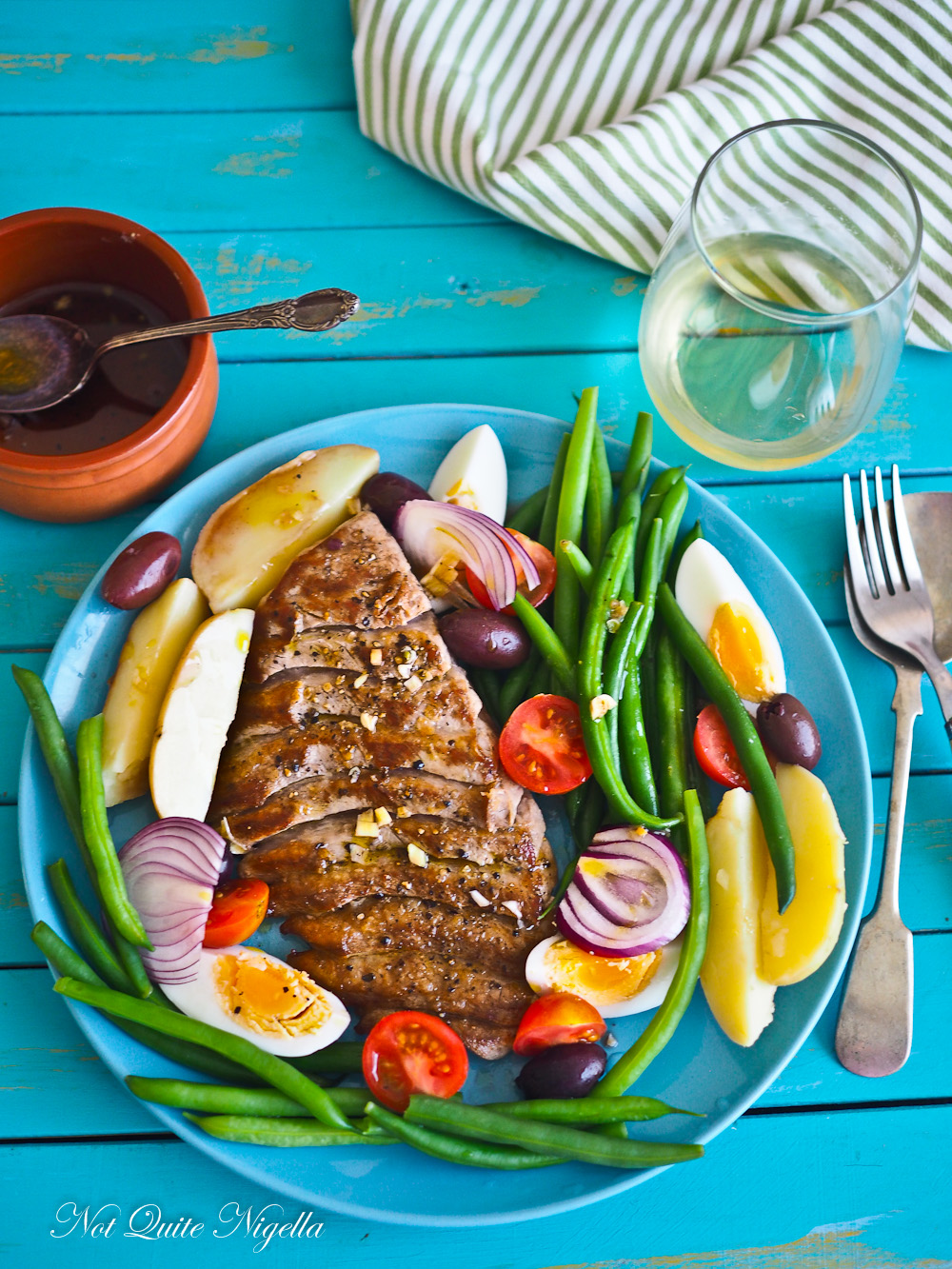 Step 1 - Sprinkle salt and pepper over the tuna belly and then place 1 tablespoon of olive oil in a hot pan and then sear on both sides. Place on a serving platter. Halve the cherry tomatoes, quarter the potatoes and add them to the plates along with the eggs, green beans and olives.

Step 2 - Whisk the red wine vinegar, oil, garlic and honey together and dress the salad.