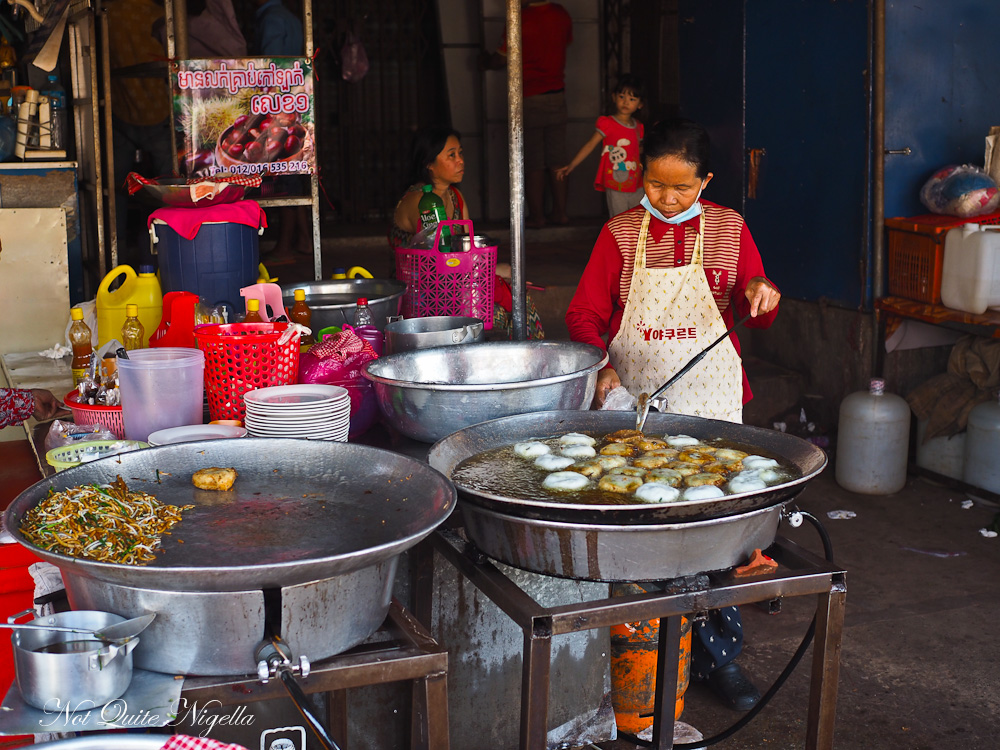 Can you believe that I waited til this long in the story to mention food? Silly me because the food in Cambodia is really, really good and chances are, unless you've visited already, you may not have tried much of it before as it has stayed in the shadow of Thai and Vietnamese cuisine. One thing though, you need to be careful with street food in Siem Reap. Street food isn't quite as safe as it is in Thailand and people should exercise more caution here than you would in other countries. Food poisoning is not only confined to street food but please don't eat it freely as you would elsewhere. 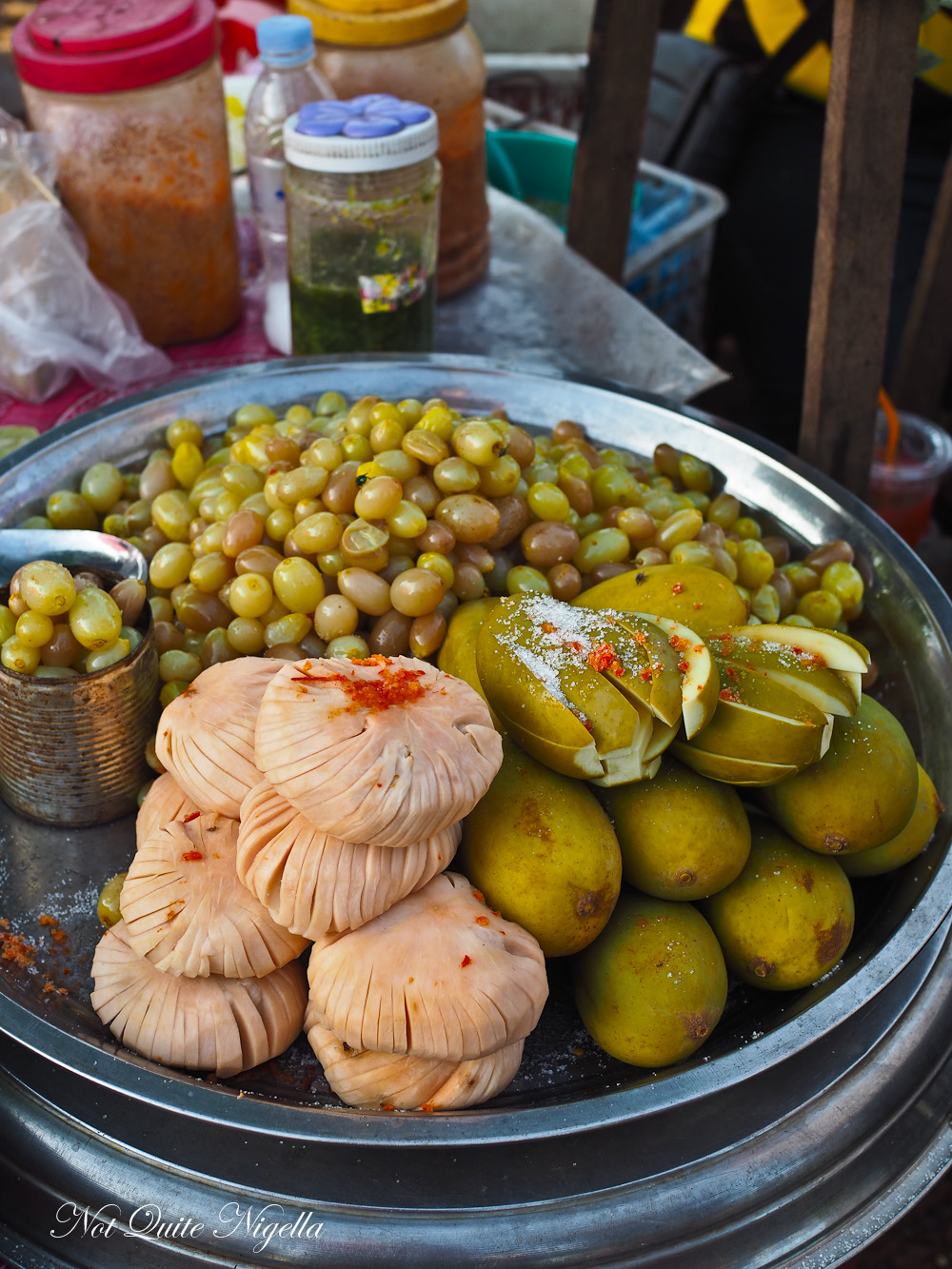 One of the best ways to try it is on a tour. River Garden's tours are held daily and are Cambodian chef-led tours where they take you to hand picked stands. For $25USD per person they pick you up and drop you off at your hotel. We started off our tour with Chef Saroun at Phsar Leu market where we bought Nom Ken Cha deep fried rice flour cakes with shallots that come with a chilli sauce and a home made fish sauce. When I was curious about the hanging beef balls at a stall she also bought some of these to snack on. 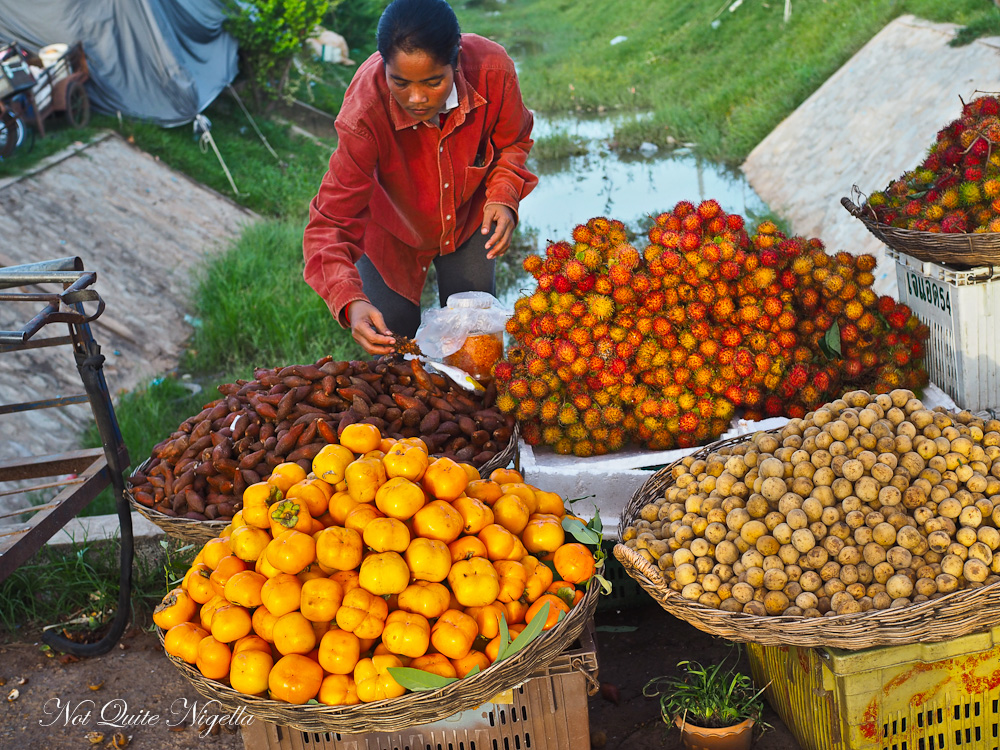 The tour then progressed to 60 Road, a very popular local street food and shopping market with a fun park attached to it (it's near where you buy your temple ticket). Come 7pm this will be very busy with families eating picnics (a night-time venture as the days are too hot to sit outside). We pick up several items including tarantula spiders, larvae and water beetles as well as fruit and dessert. 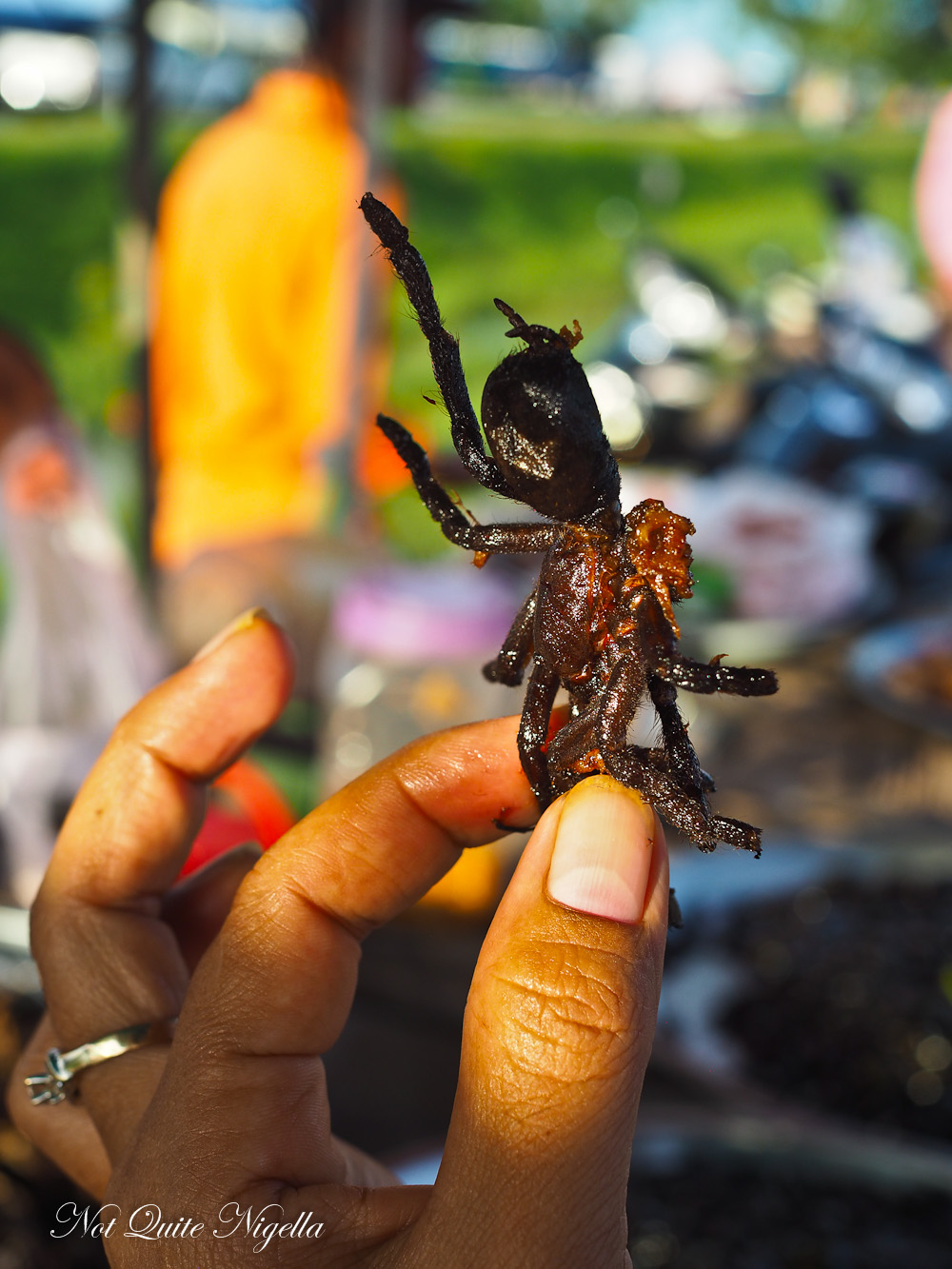 Well... it's a tarantula

We end up at a bbq stand where Saroun asks us to pick what we would like. We go for the stuffed frogs legs and a few other things before sitting down on the mats behind the bbq stall to eat our spoils. She dispenses sanitizing fluid and we tuck in. The stuffed frogs legs are absolutely divine. I could eat these every day and they taste like stuffed chicken thigh with a pork meat, frog meat, lemongrass, chilli, galangal and holy basil. 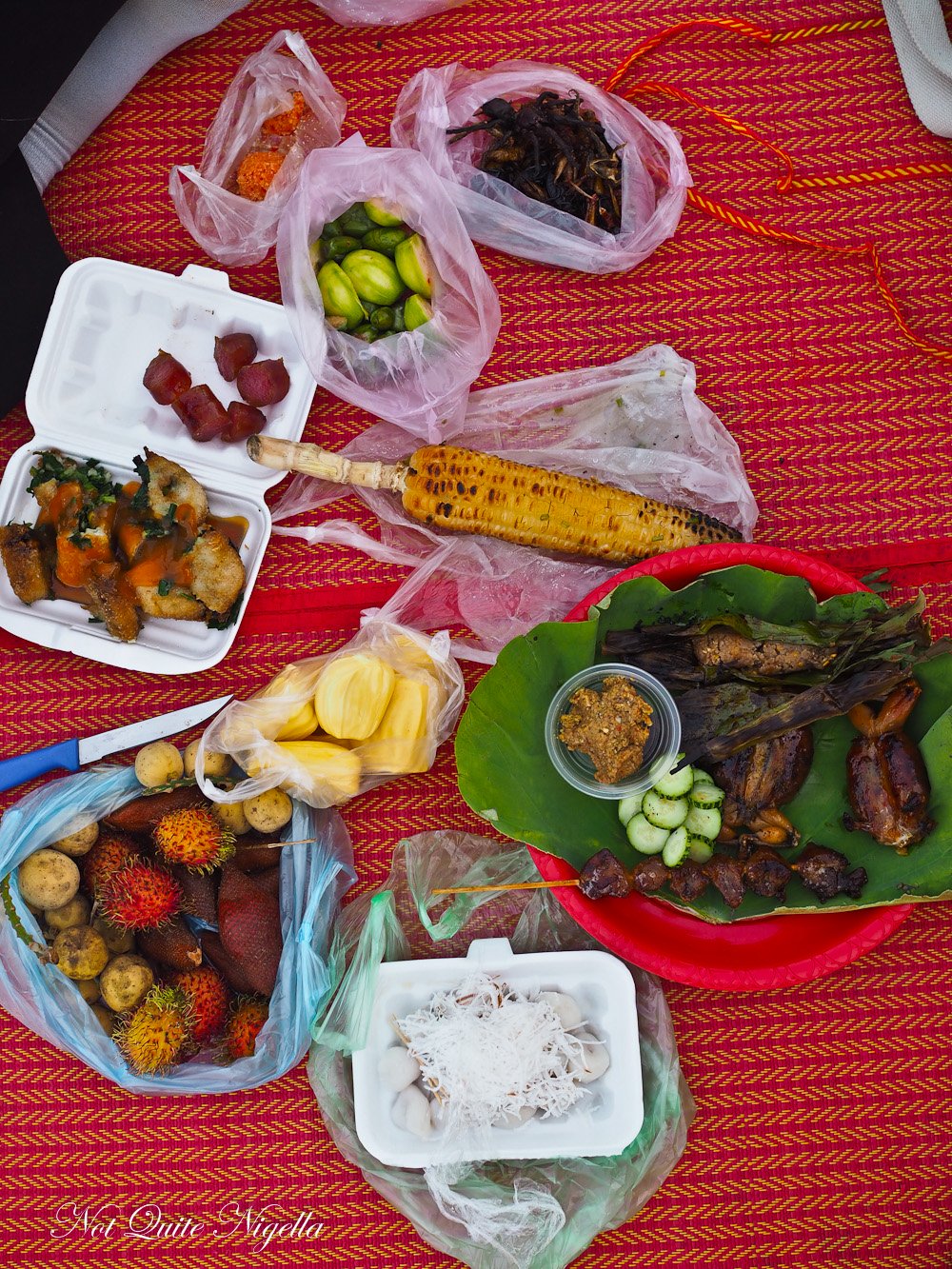 The tarantula spiders are rather confronting to look at. But you know what? They taste simply like the chilli and ginger marinade that was used that. Who knew tarantulas were delicious? Most of the dried insects tasted just like the flavours they were marinated in really because they become almost chip or crisp like once fried. The pork sausage is just like lup cheong but less fatty and the Nom Ken Cha are really delicious and crisp. 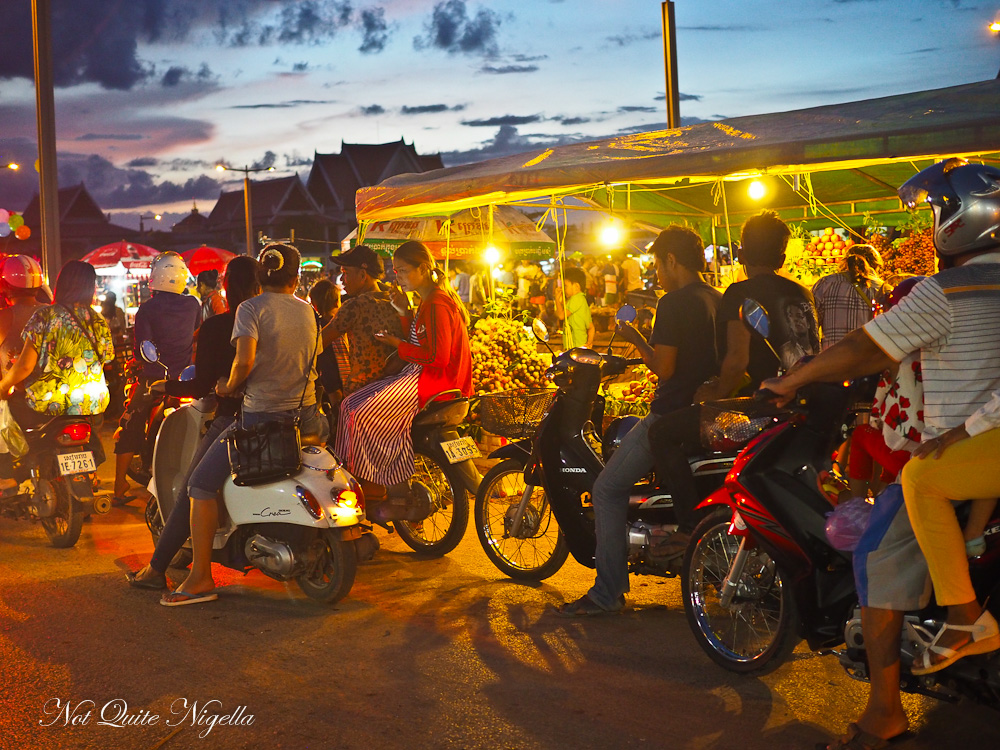 The savouries are followed by jack fruit, rambutans, tangy snakefruit and a dessert called "Husband killers" that are rice flour balls filled with palm sugar syrup and topped with fresh coconut.

P.S. Anecdotally we were told to avoid the street food especially in front of the hospital near Old Market. Ironic right? Or genius location.

« Find other things to do in Siem Reap