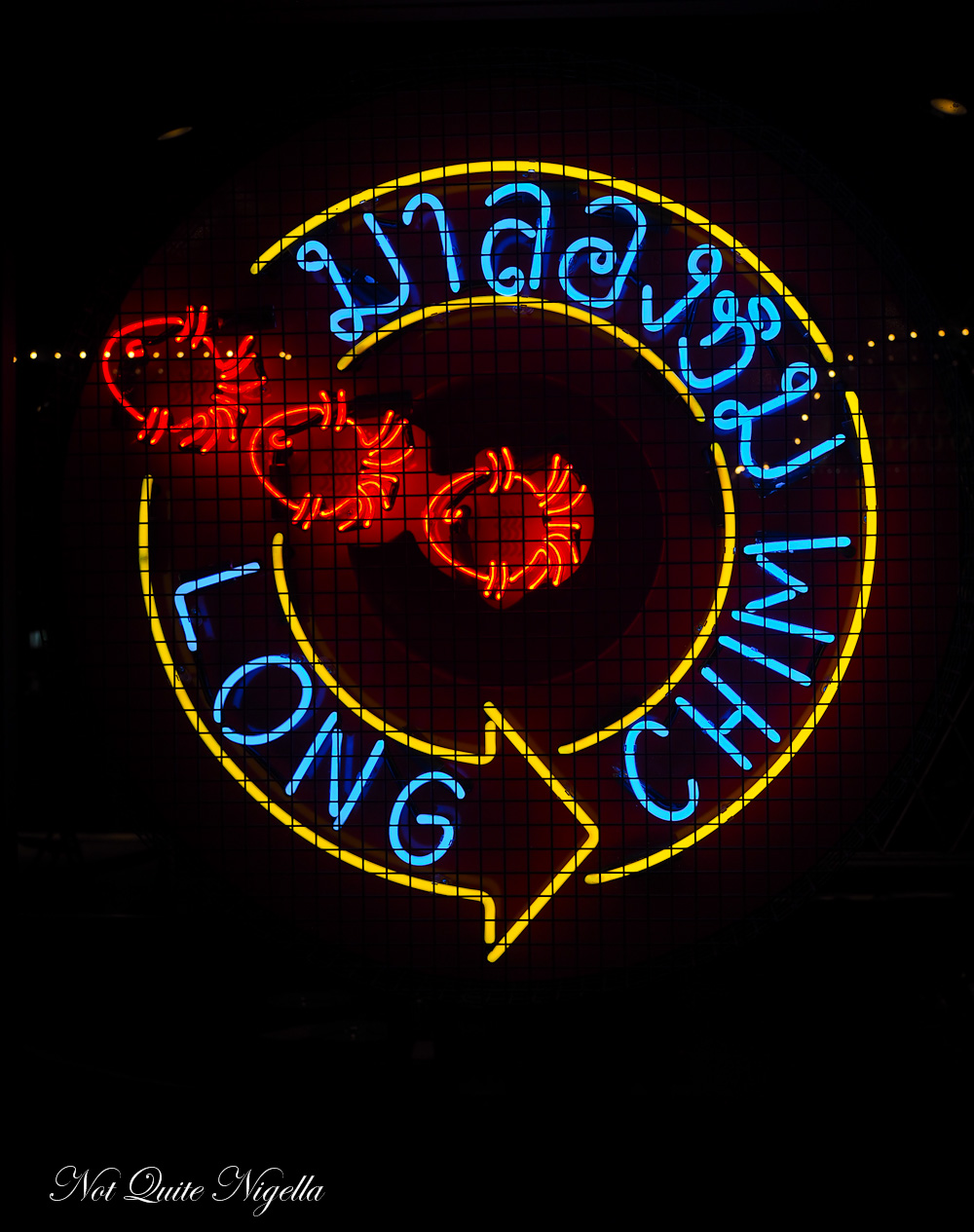 Chef David Thompson's newest Thai restaurant Long Chim in Angel Place is street both in decor and food in comparison to his upmarket Nahm restaurant in Bangkok. Graffiti, murals and Thai art decorate the walls of the second Australian Long Chim branch. The menu is made up of street food offerings and cocktails in names like "Muay Thai Mai Tai" and "Or Tor Kor Mule #2". And if you love chilli, then there's a dish that's just waiting for you... 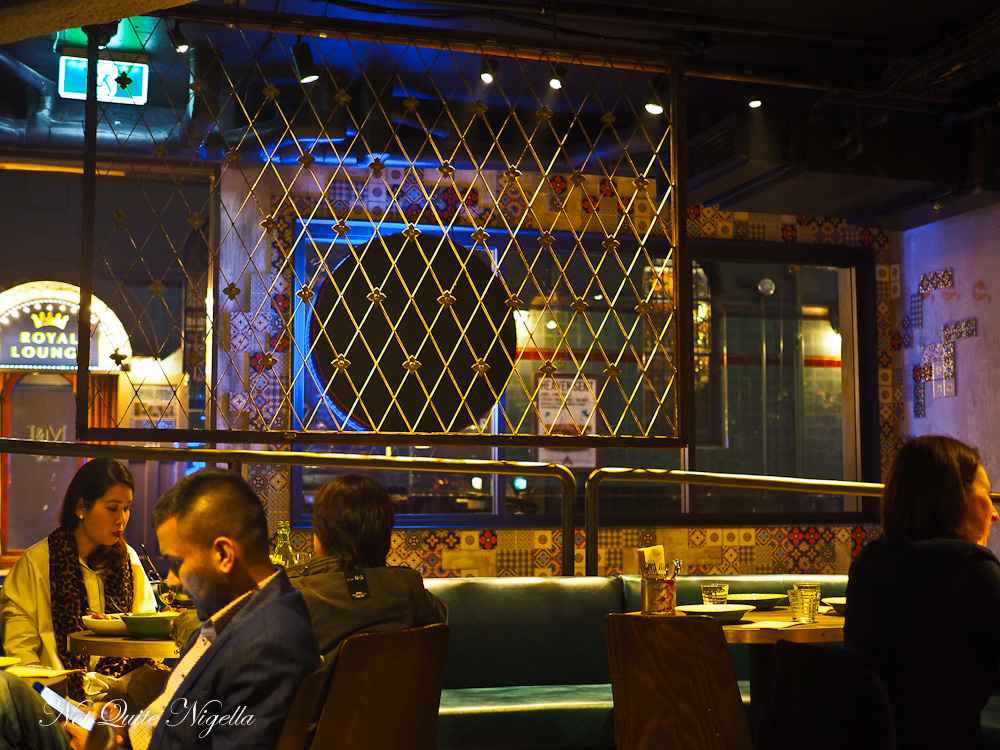 The Sydney branch joins the Long Chim restaurants in Perth and Singapore. At the moment as it is new, the menu is not as expansive as the other restaurants. This evening Thompson was spotted in the kitchen prepping and he will remain here for the first month or two before splitting his time between his restaurants. 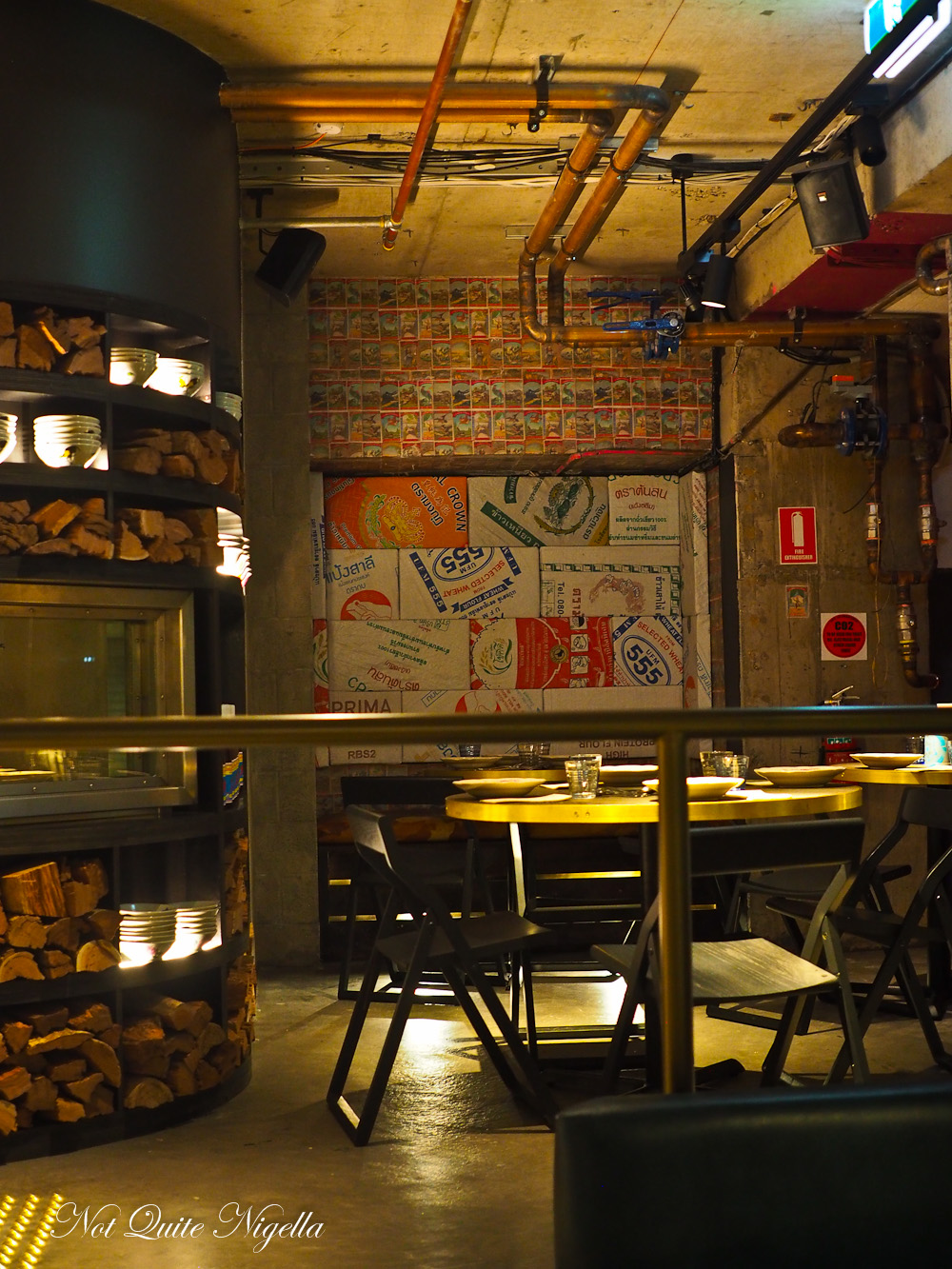 Alyson and I are seated in the first dining room but little do we know (until we explore a bit further) that the restaurant opens up into a back section with adorable booths and quiet little sections for small private groups where murals of monkeys or deer look down upon diners. There's a wall of Siamese fighting fish in jars and an open kitchen in the centre. 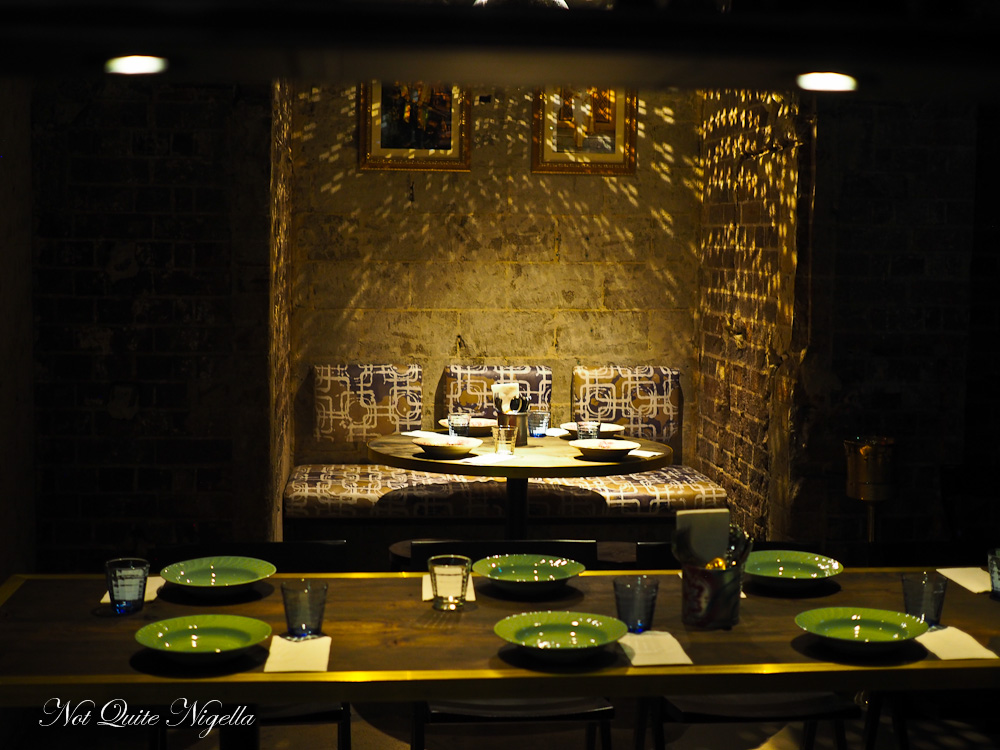 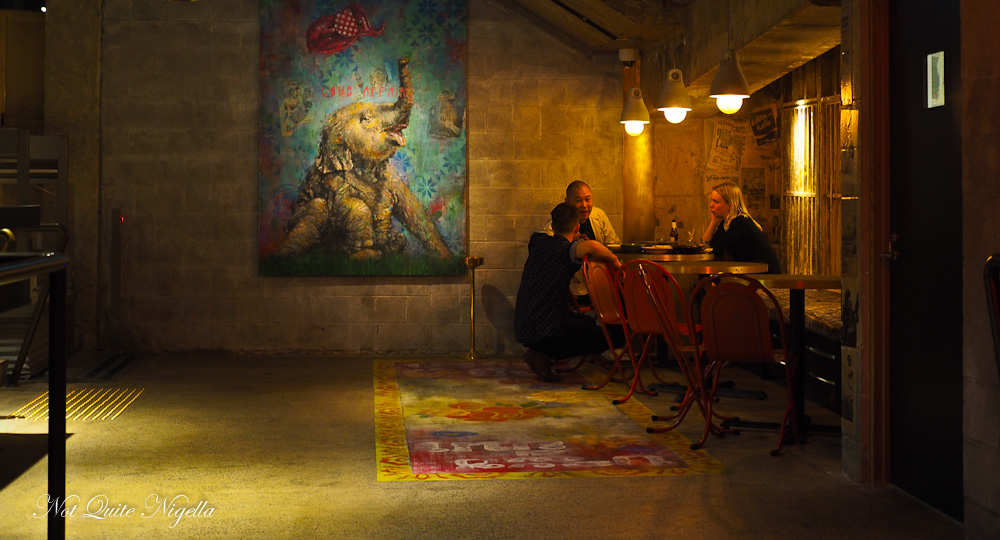 Service is really lovely, sweet and accommodating, a style that is alas sometimes missing in Sydney. We come armed with recommendations from friends who have dined here. As it's a Monday night we forego the cocktails and go for water instead. A shame as the cocktails do look quite good indeed. Alyson and I order enough for three or four people - this is what happens when two girls go out to eat and one begins the conversation with "I'm starving". 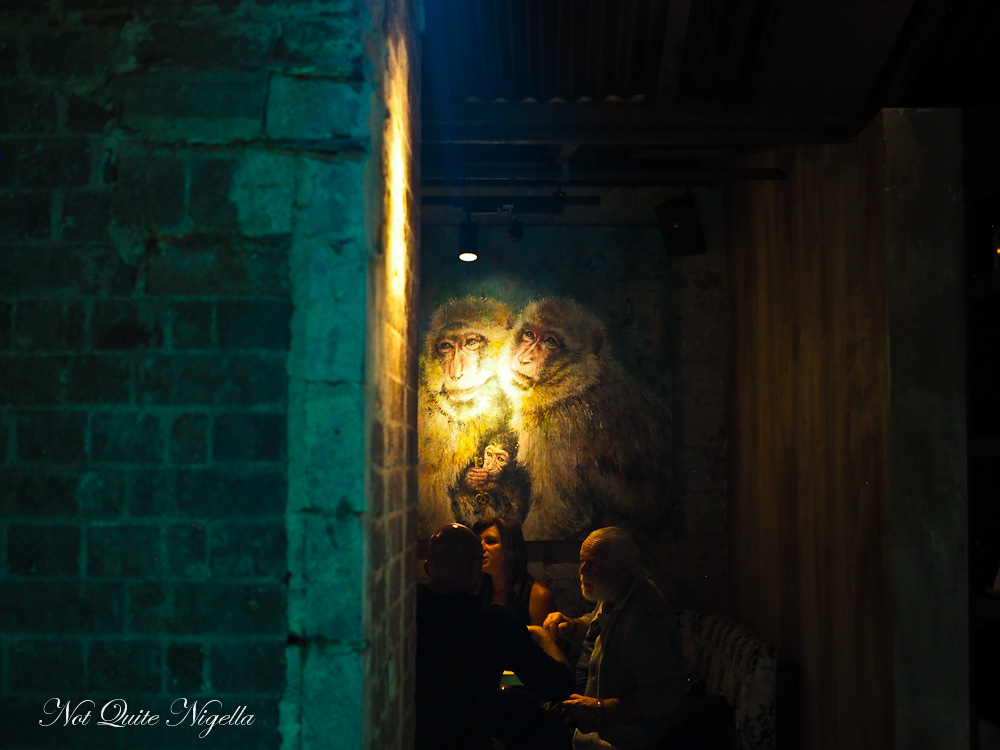 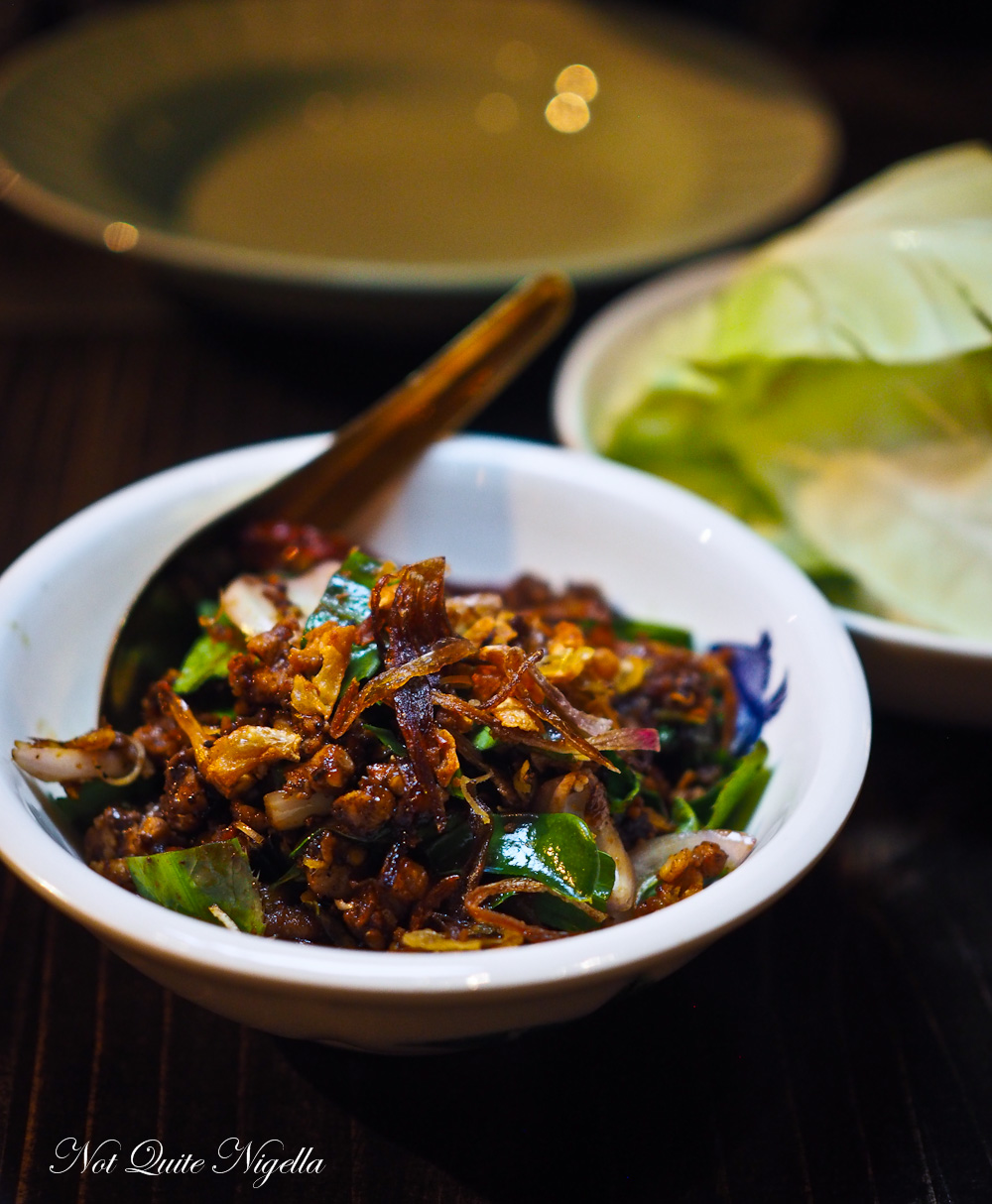 We start off with a bang. This dish came with a warning and when we asked for recommendations the first question was not what we felt like eating but how spicy we like our food. Described as a "12 out of 10" for heat the chicken larb mince has a very heady spice paste mixture and such a powerhouse of flavours that you can't help but wonder what you should attend to first: your mouth that is dancing with prickles or the medley of flavours from the spices. You spoon a little of the mince mix onto a cabbage leaf and roll it up and eat it. For me it's very hot but not debilitating but it does pack a punch and a pronounced saltiness. It's a bit too much however for Alyson who is a good chilli eater. 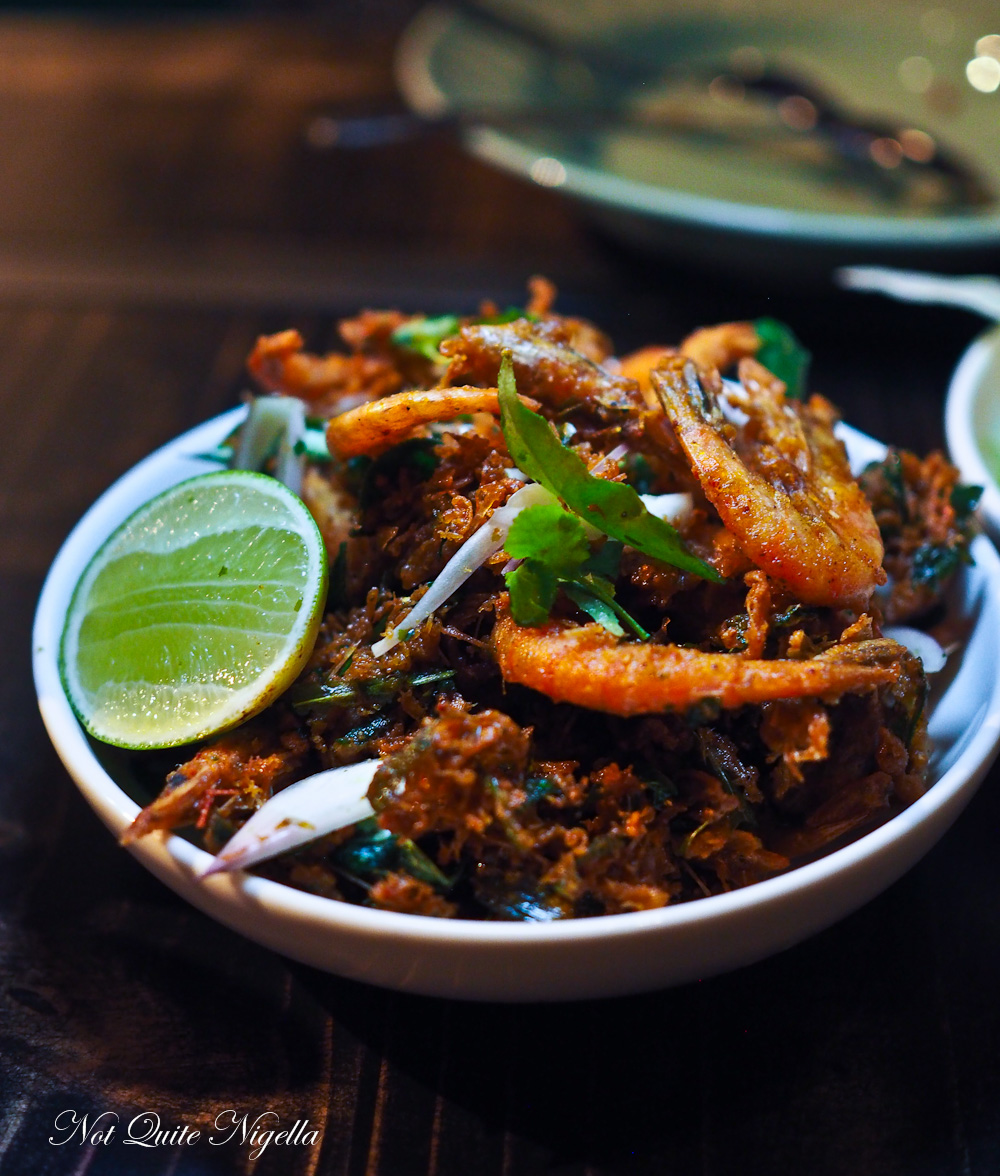 To temper the Chiang Mai larb is an order of crunchy prawns with kaffir lime leaves, fried shallots, finely sliced golden shallots and coriander that has a freshness to it along with the crunchy school prawns. I can imagine crunching a bowl of this with a cold beer. 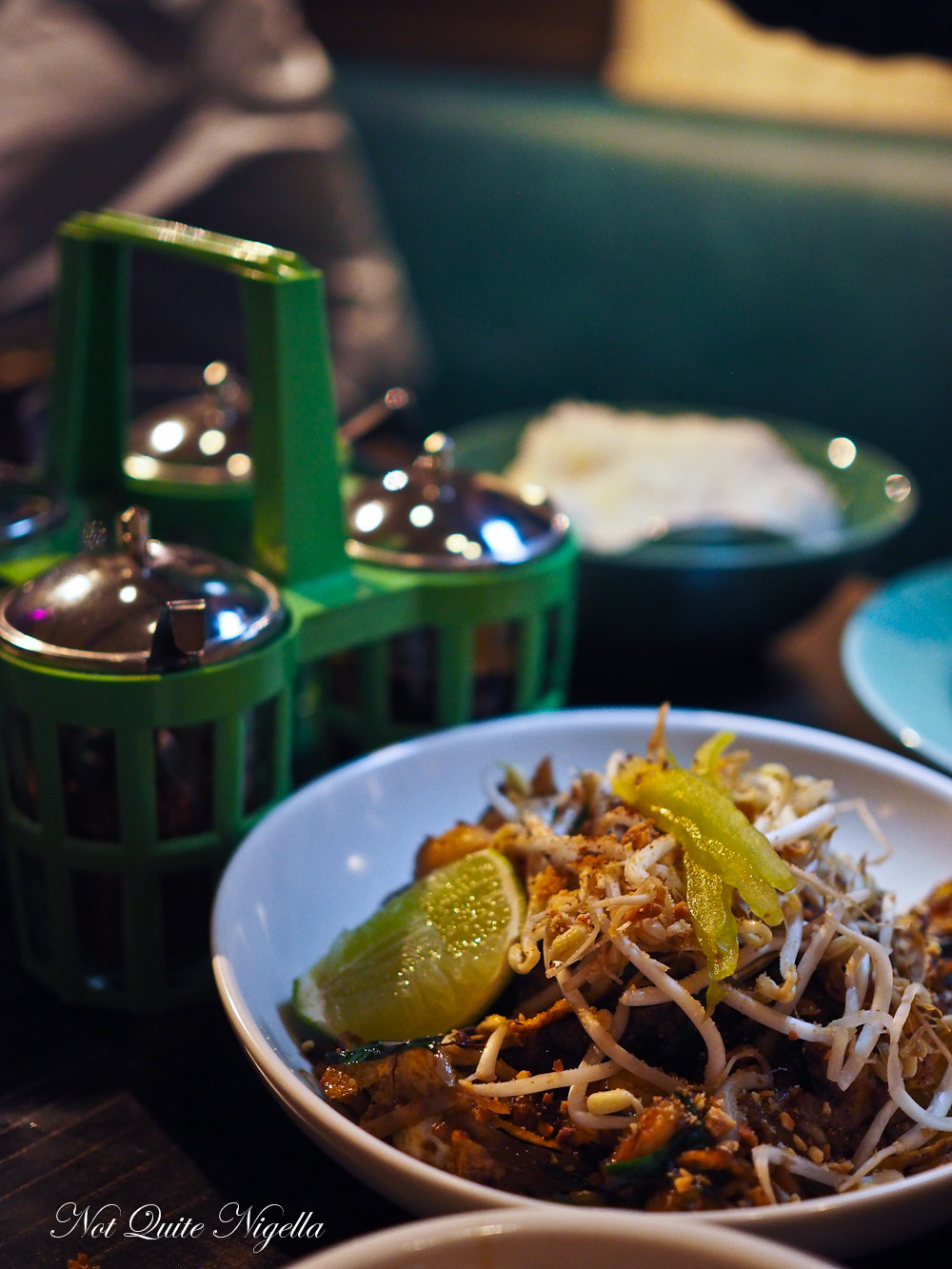 The Pad Thai is said to be one of their signature dishes so we had to try it. I also wanted to see what it was like compared to my humble little Pad Thai. This version is topped with star fruit and is made with prawns and comes with a big wedge of lime and saucy rice noodles. They set down the condiment tray with sugar, pickled chilli, fish sauce and sugar as they say that Pad Thai is only seasoned properly once you've added what you like to it. After the chilli of the larb we probably don't need any, just a little fish sauce and that's all it needs. It's sweet and moreish but not as sour as I've had it in other places. 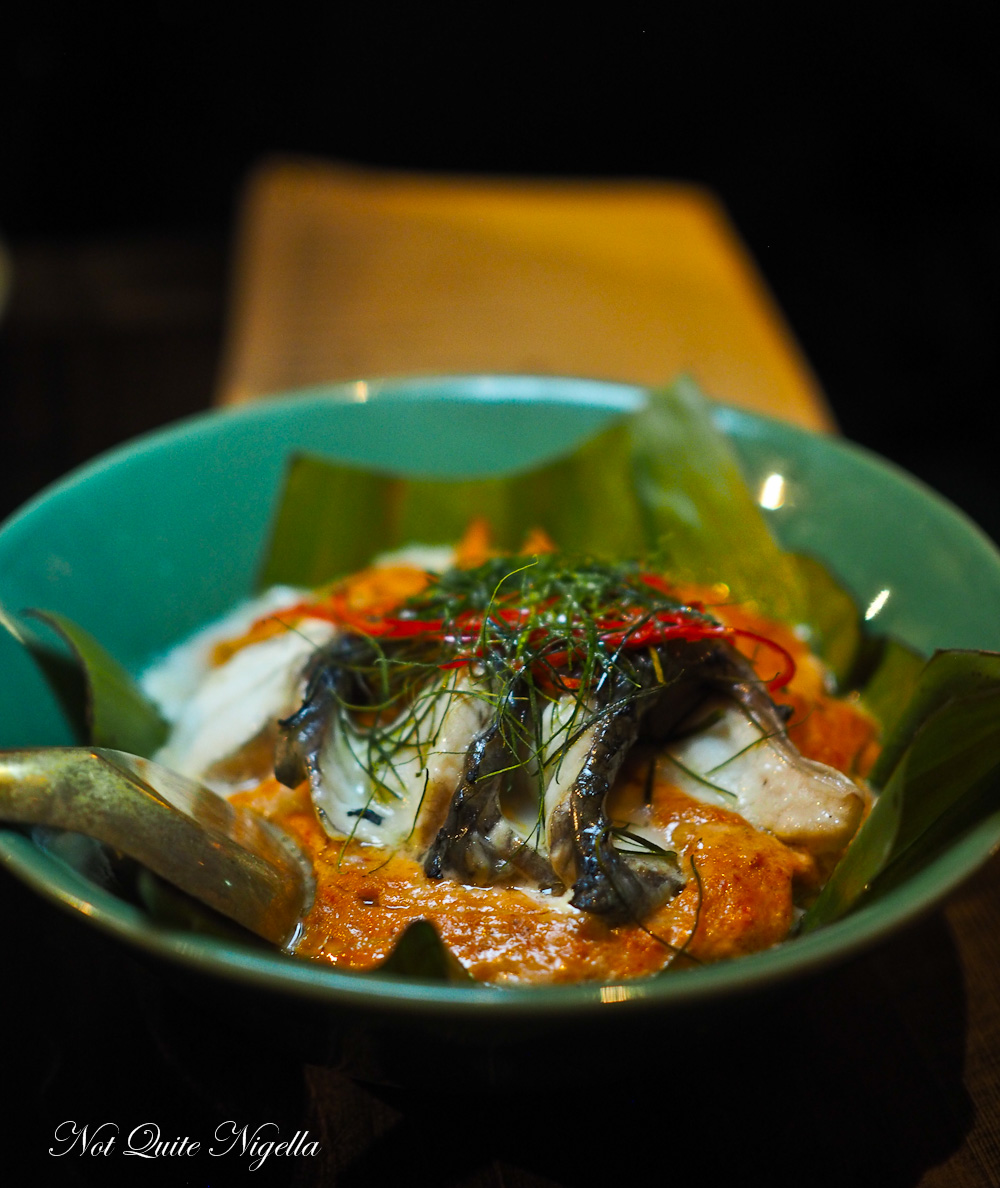 This Ho Mok Pla was a recommendation and it is a steamed red curry of barramundi which is barramundi fillets mixed and massaged with red curry. It's quite similar to Cambodia's fish amok. In this version fillets of plain barramundi sit on top. This is an intensely rich dish with eggs and coconut cream with a souffle like quality. This brings back memories of walking around Or Tor Kor markets with David Thompson and having this dish. 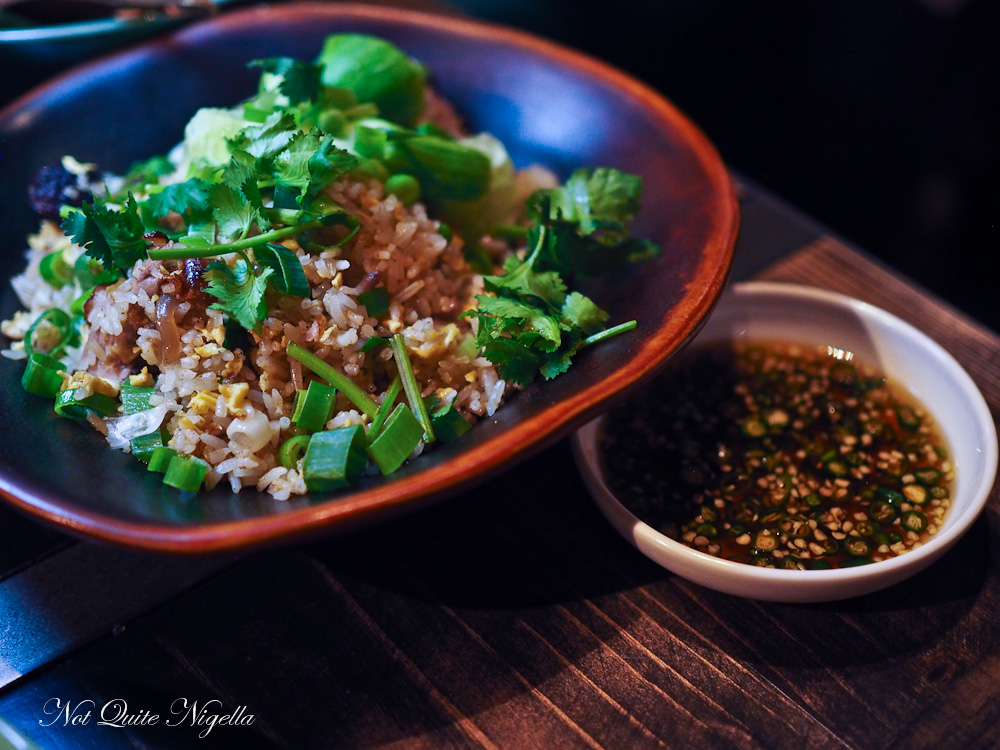 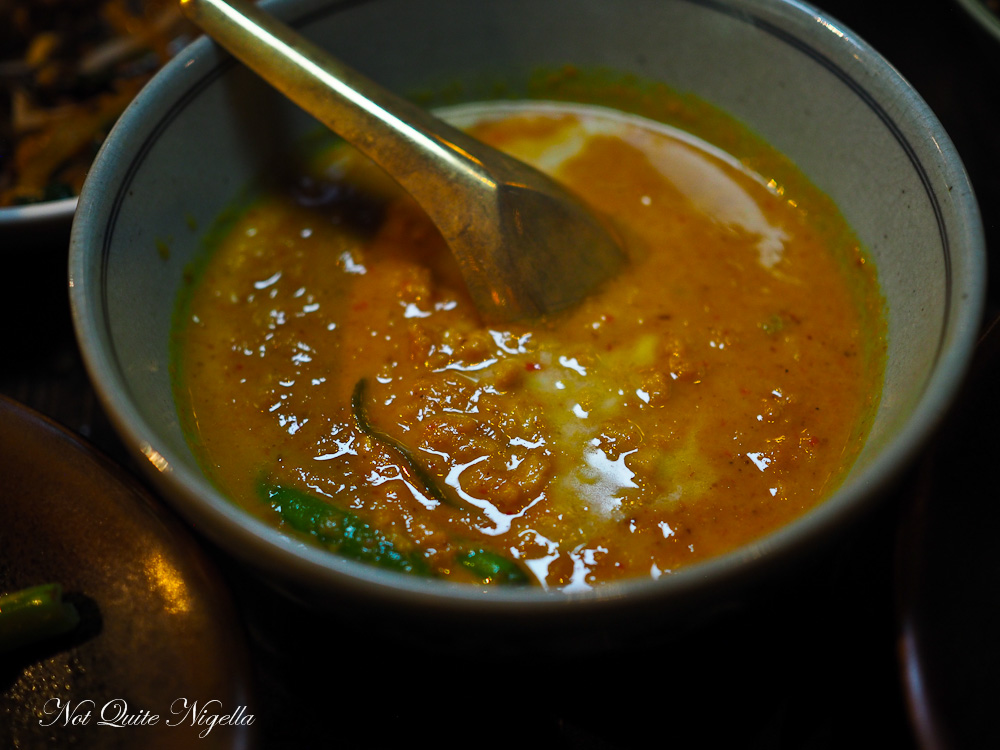 My favourite dish of the night has a rather strange name but it does the job of describing how the prawns are presented. While it doesn't look like much from appearances, they can be deceiving. The prawn meat is tender and comes minced or mashed up among a coconut and turmeric curry with a good balance of sweetness and savouriness. 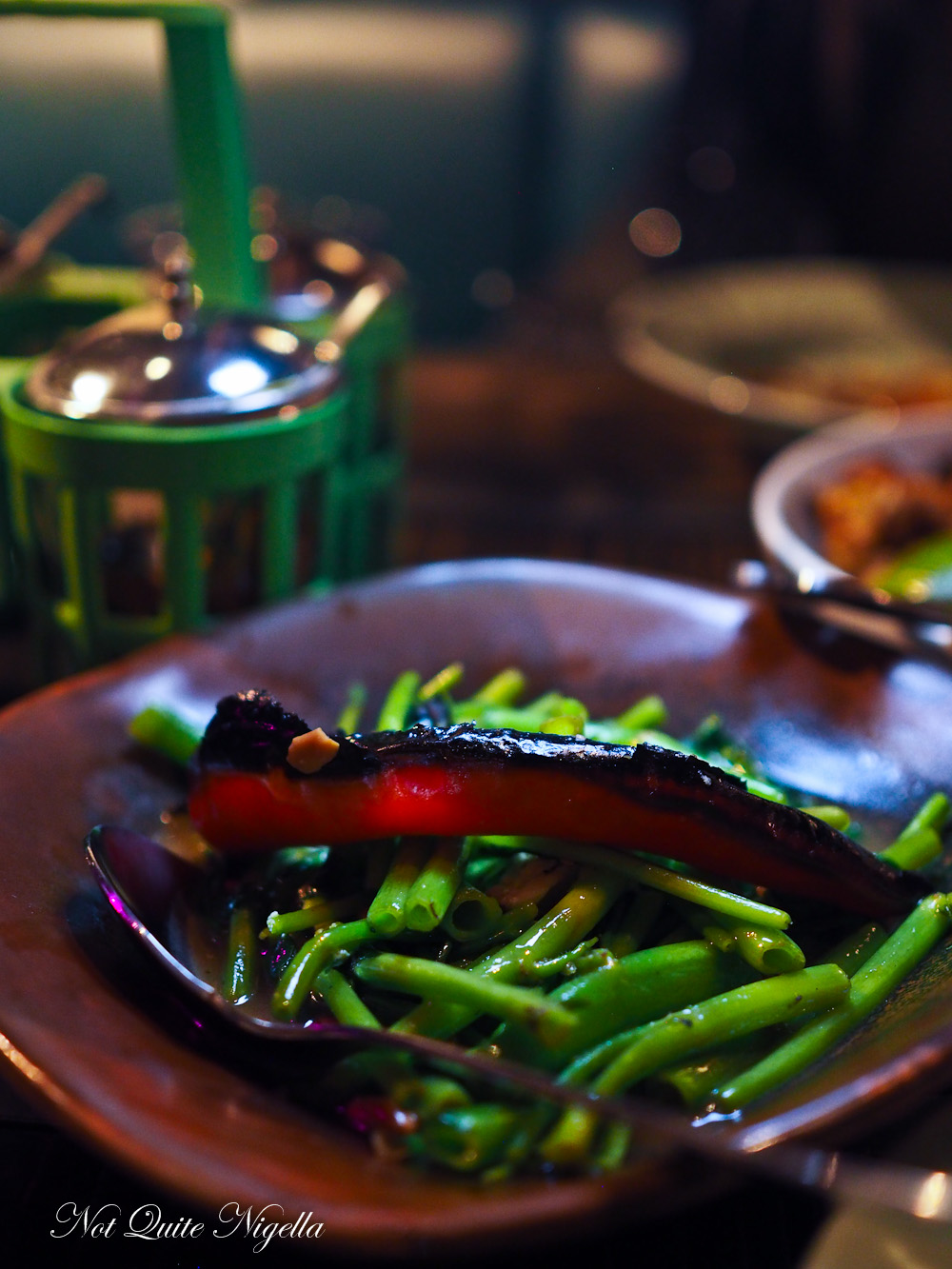 The Siamese watercress is mild respite from the flavour powerhouses of the other dishes. It helps recalibrate the palate and although it is simple it is just what we need as many of the dishes are on the salty side. 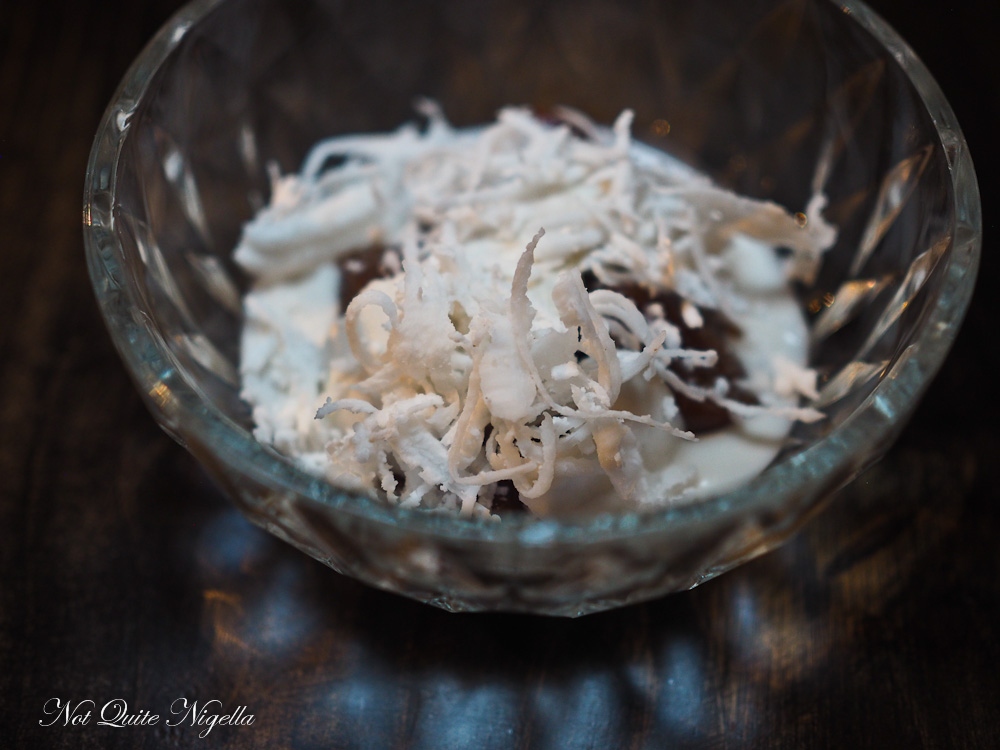 Tables of two generally have to give their tables back after one and a half hours but this Monday night is fairly quiet so they don't move us on. Which gives us enough time to order dessert. There are five to choose from including durian ice cream, coconut cake, banana roti and grilled sticky rice with banana. We choose the palm sugar pudding. Our waiter tells us that it is an item that is served for ceremonial occasions. The palm sugar and rice flour dumplings have a treacly or golden syrup quality and are topped with freshly shaved coconut and coconut cream.

The bill comes to just over $200 so they're not street food prices but it's not a street food setting either.

So tell me Dear Reader, what is your chilli tolerance out of 10 where 10 is fiery and 1 is mild? Do you drink cocktails on a Monday night? And do you have a favourite Thai dish?

Read a blog post review of Nahm and a market tour with David Thompson. 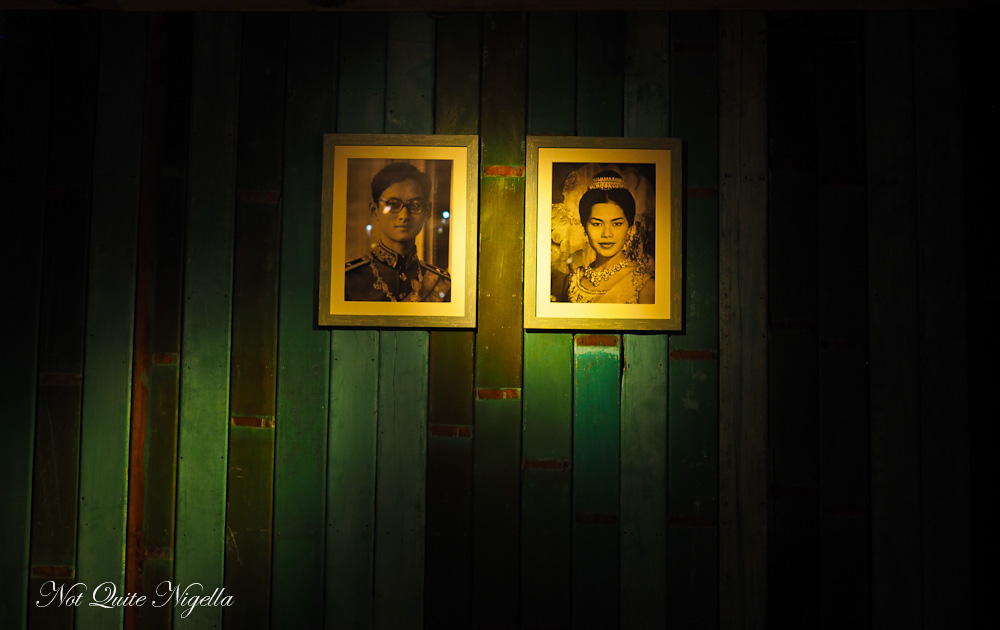 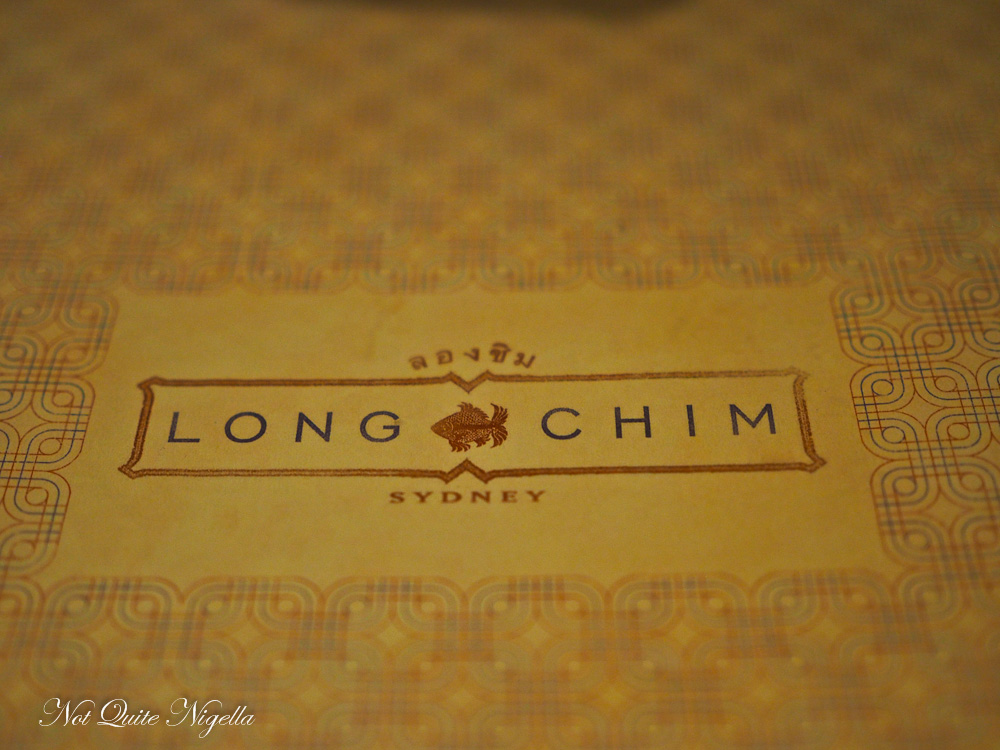