Nung Len and Then, Potts Point 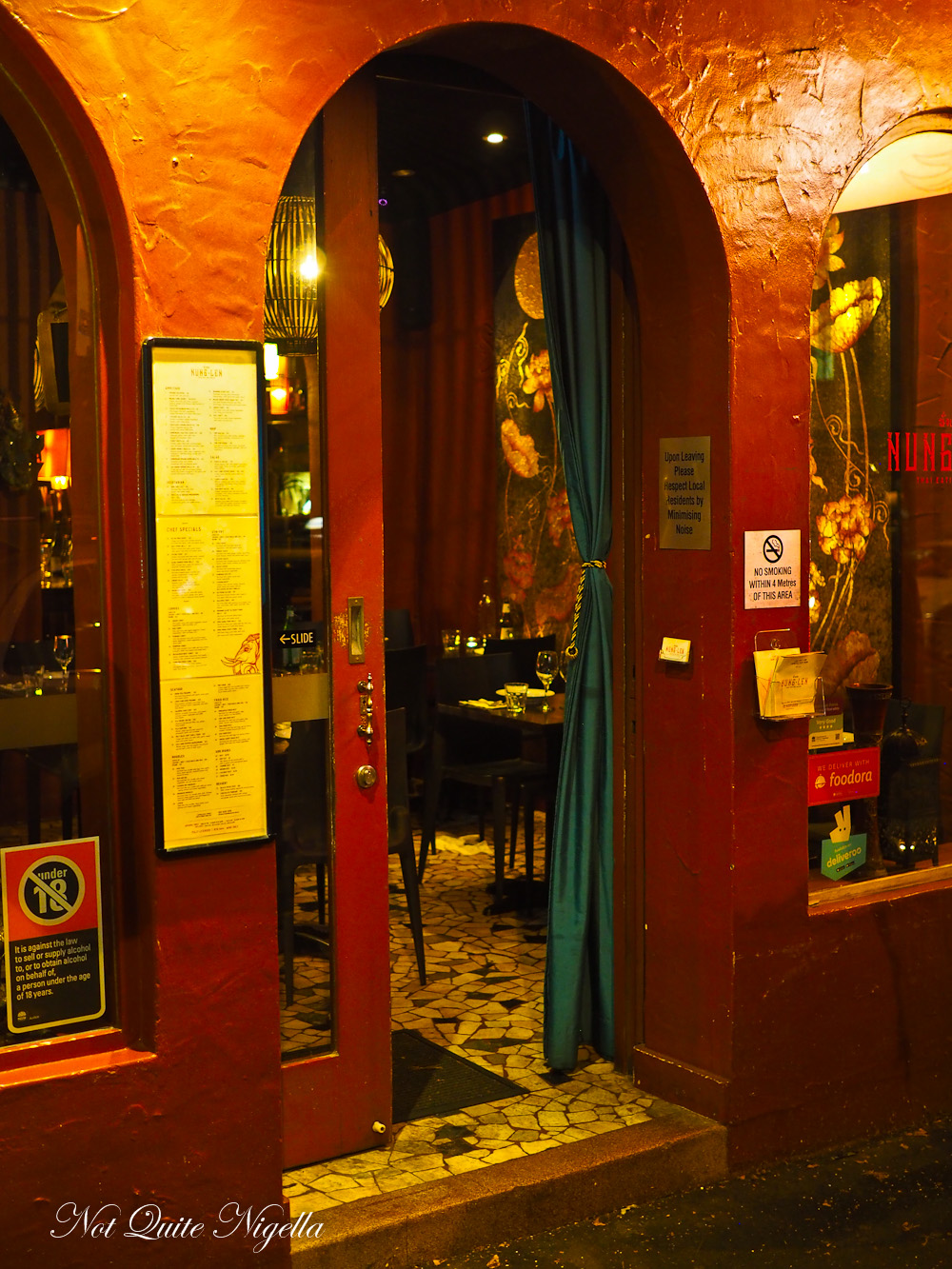 Nung Len is a Thai restaurant on Macleay Street in Potts Point that sits where Opium Den was for so many years. Inside it's dark and nicely outfitted while the menu is full of Thai classic dishes. It is also nice enough for a birthday dinner which was exactly what were were looking for.

"I'm starting a wolf pack" says Garth to Mr NQN. "You want to join?" he says somewhat hopefully before cajoling his man buddy to howl like a wolf. Yes he and Mr NQN have a full on bromance going on that constantly stuns and amuses Nina and I. 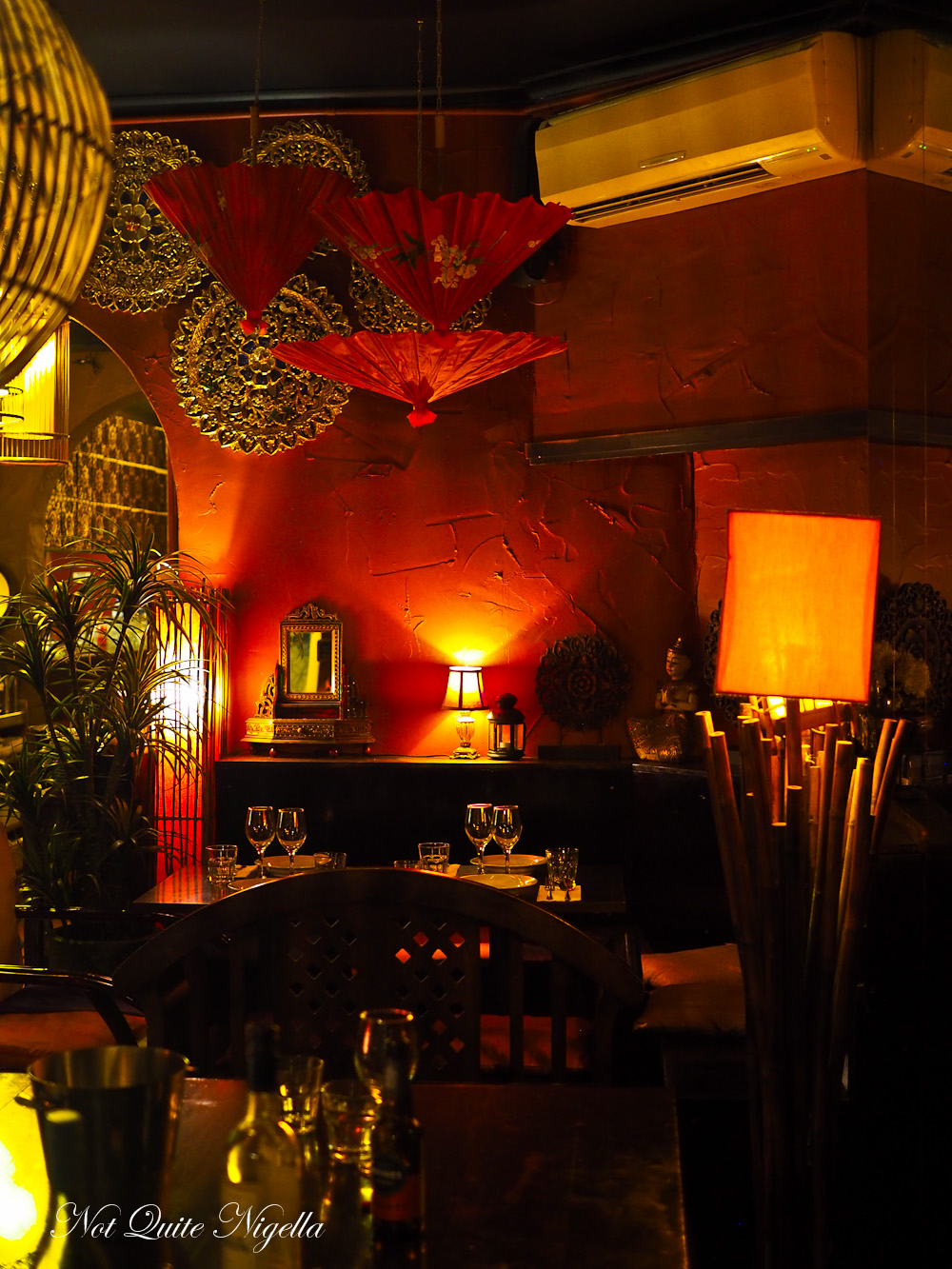 It's Saturday night in Potts Point and a howl doesn't go stray here. There's a man belting out the odd note (very loudly right near us) and we are celebrating Garth's birthday with an escape room and then dinner at a Thai restaurant. It's his favourite food as he once lived there. 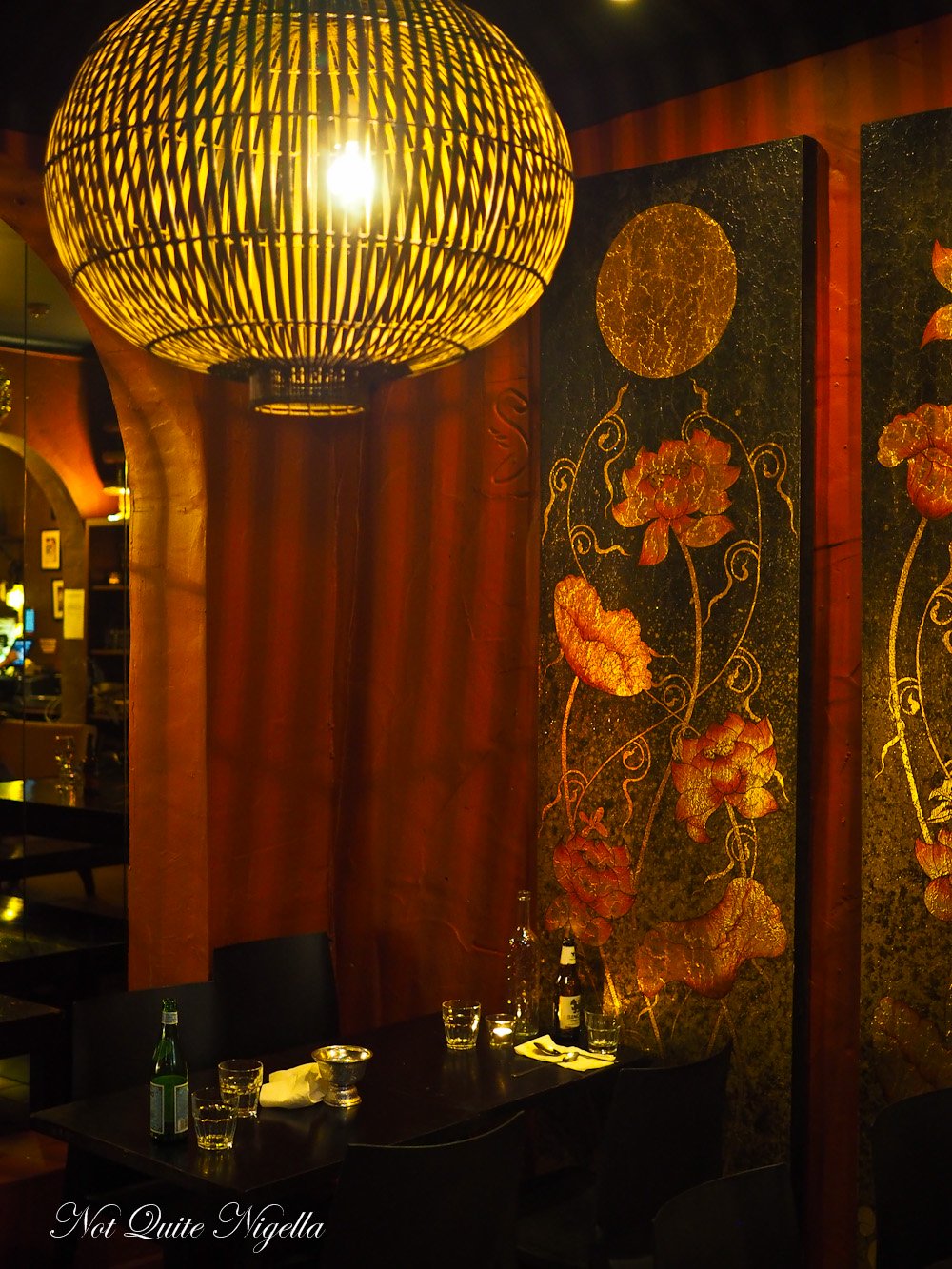 We have a booking for four and they lead us unto the second room which is markedly less atmospheric than the first room (we dub it Siberia) so we ask to move to the front room. A little bit of a wait later and we are back in the front room which is much nicer. I order a few dishes for everyone and before I realise it we've ordered quite a lot. Never trust me with ordering unless you are hungry. 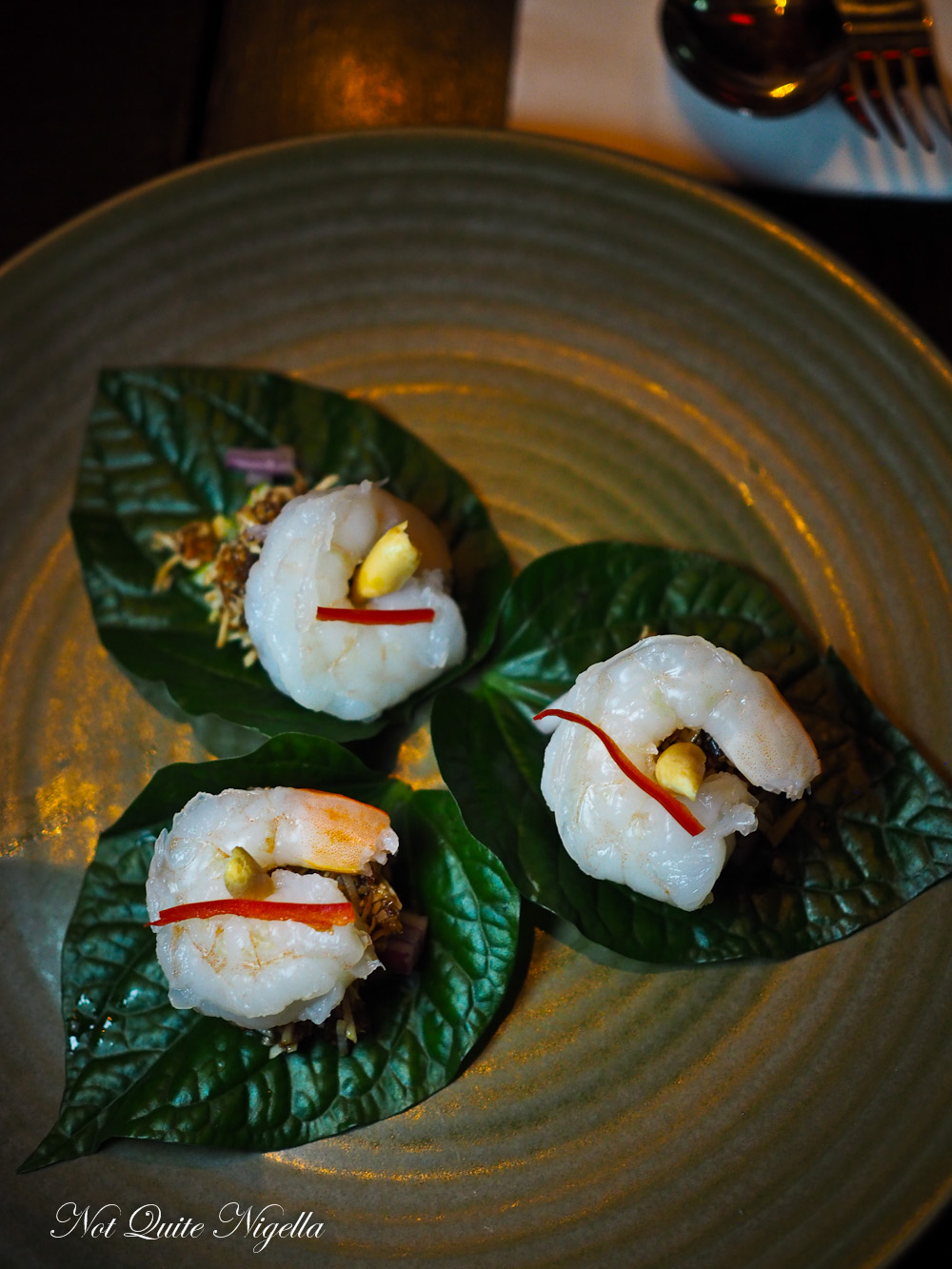 We start with betel leaves topped with prawns, coconut and lime zest, roasted peanuts, lime zest and ginger. They're such fun bites and I wish we had a whole platter of these. 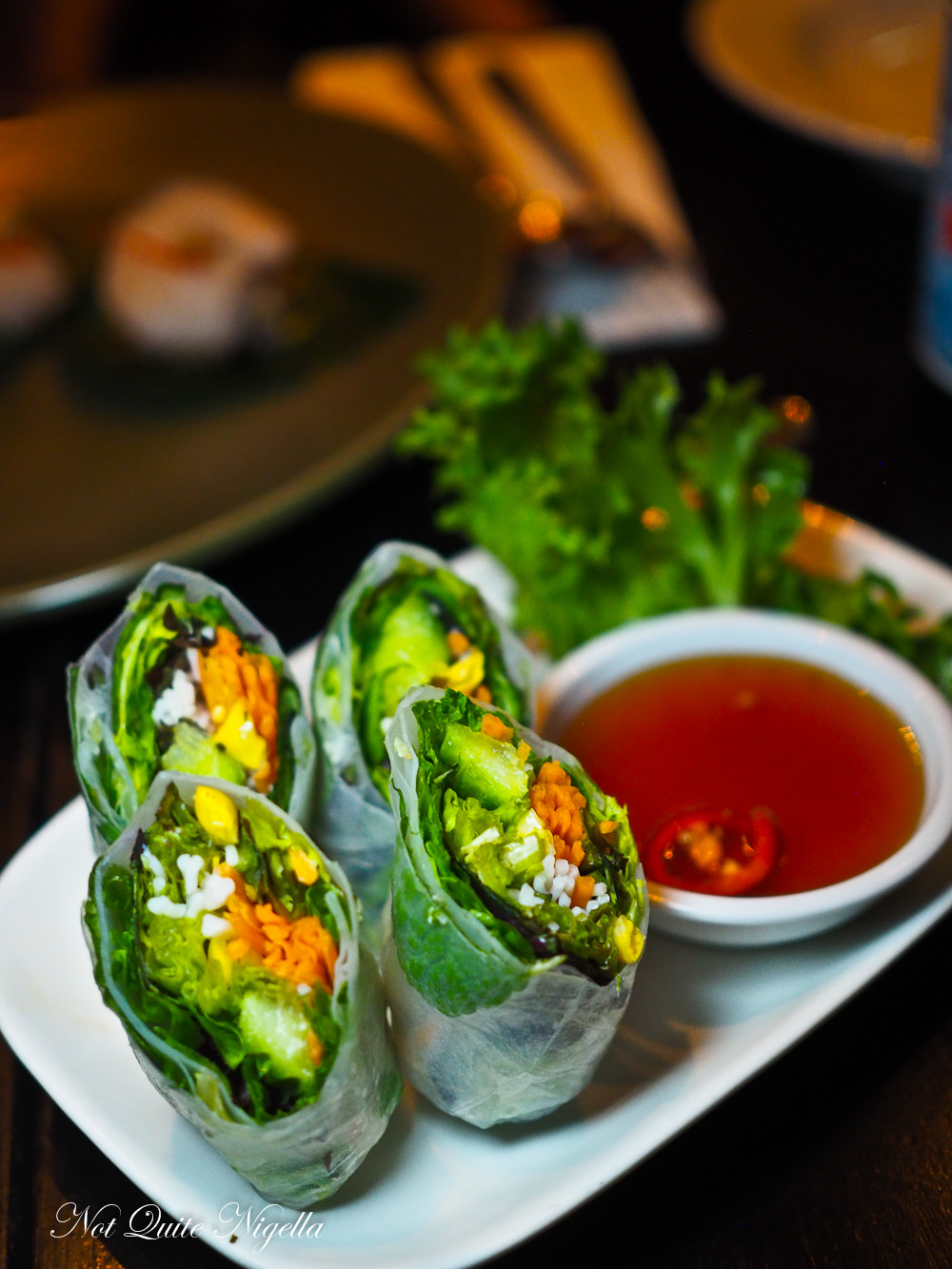 I tried some of Nina's vegetarian fresh rolls. They aren't bad but hoenstly I'd have loved some prawn or chicken in them. 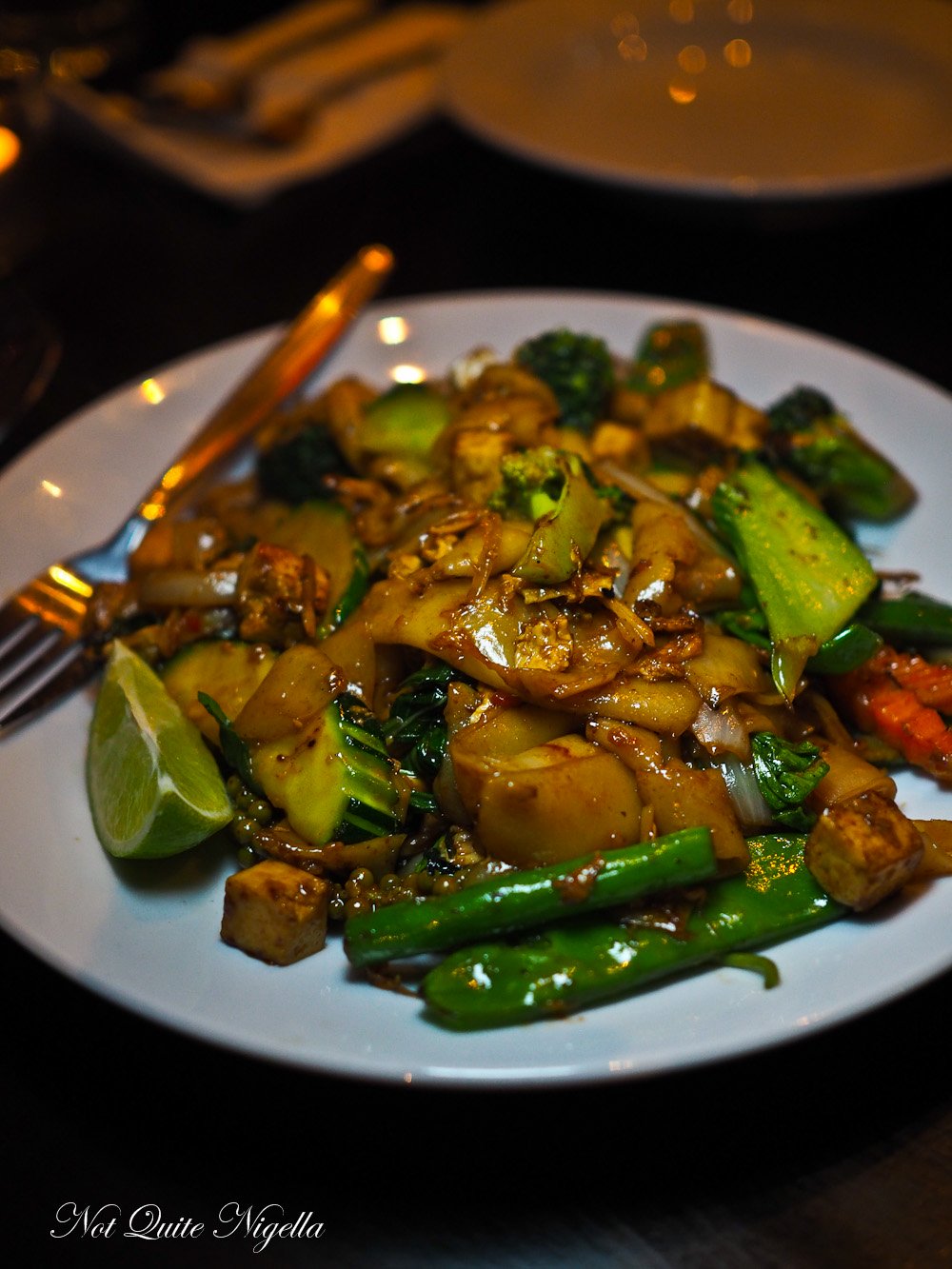 The first dish to arrive is the drunken noodles. They're stir fried wide rice noodles with carrots, broccoli, snow peas and plenty of holy basil which I love and makes it really moreish. I think this was the first plate to clear too. 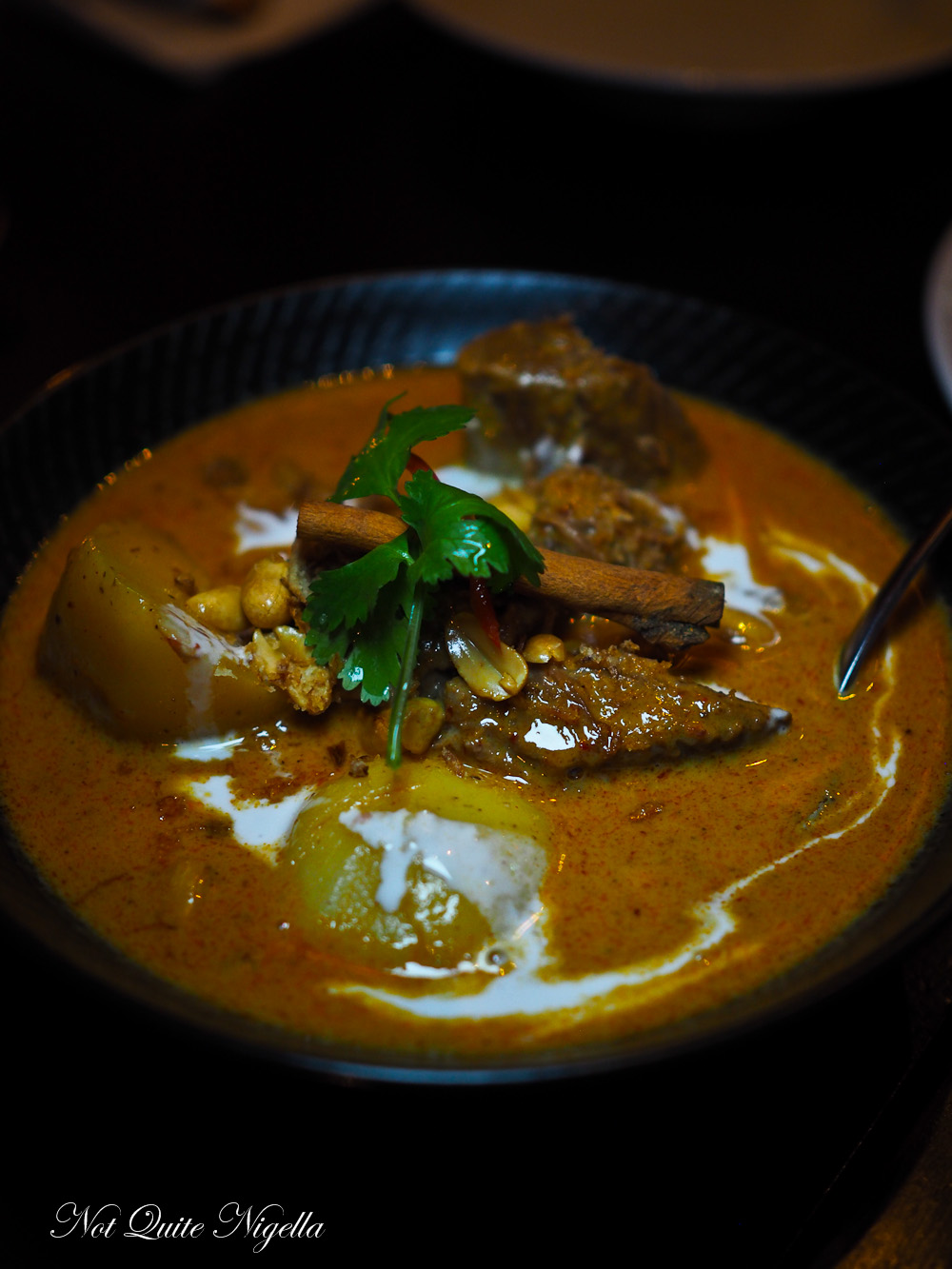 The massaman beef curry has large tender pieces of beef in a creamy coconut and peanut based sauce with large tender potatoes. It's Garth's favourite dish and I also really loved the sweet creaminess and the soft, melting beef. 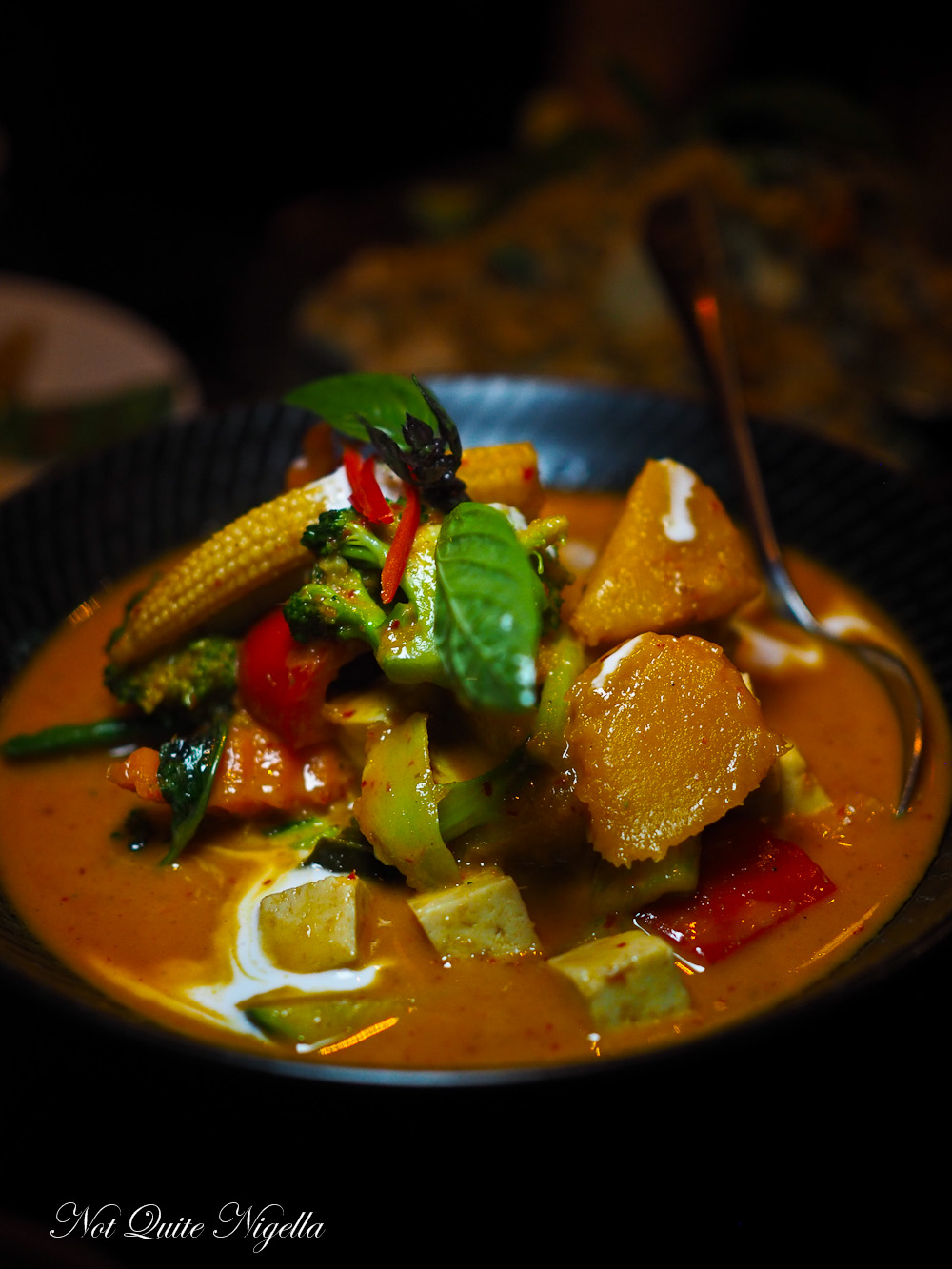 Pumpkin Curry With Vegetables and Tofu $19

I try some of Nina's curry and it is a red curry with pumpkin pieces and plenty of Thai basil and kaffir lime leaves. It's quite sweet in flavour and salty. 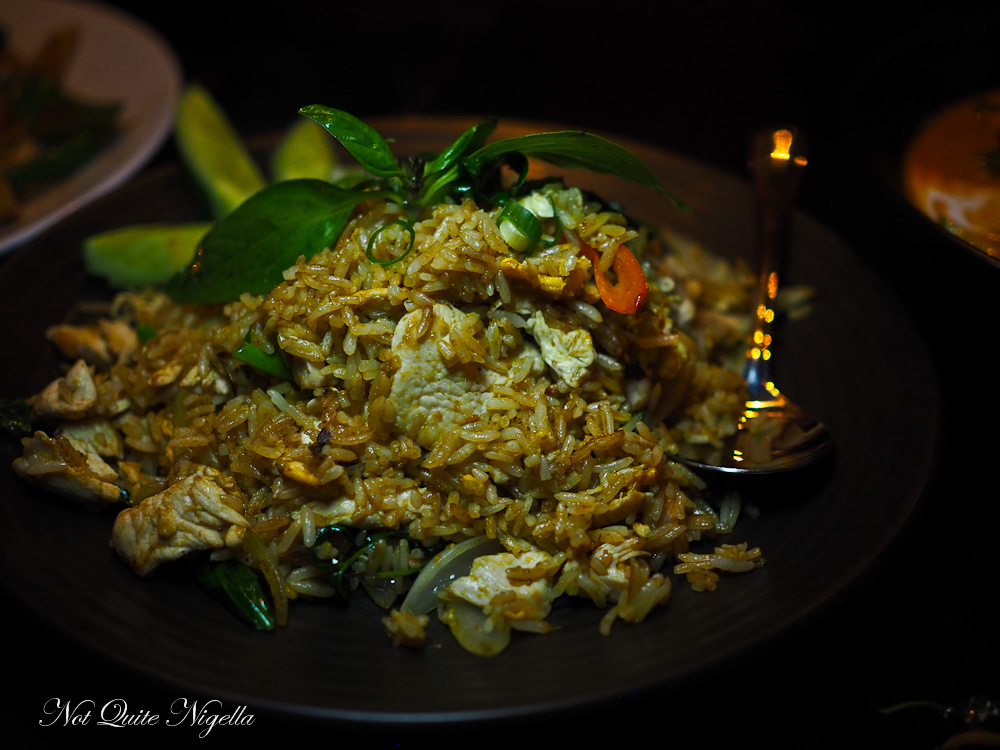 I haven't really seen curry fried rice at Thai restaurants and thought that we could try this. It has a hint of green curry and we paired ours with chicken. It's a nice riff on fried rice with an added flavour hit. 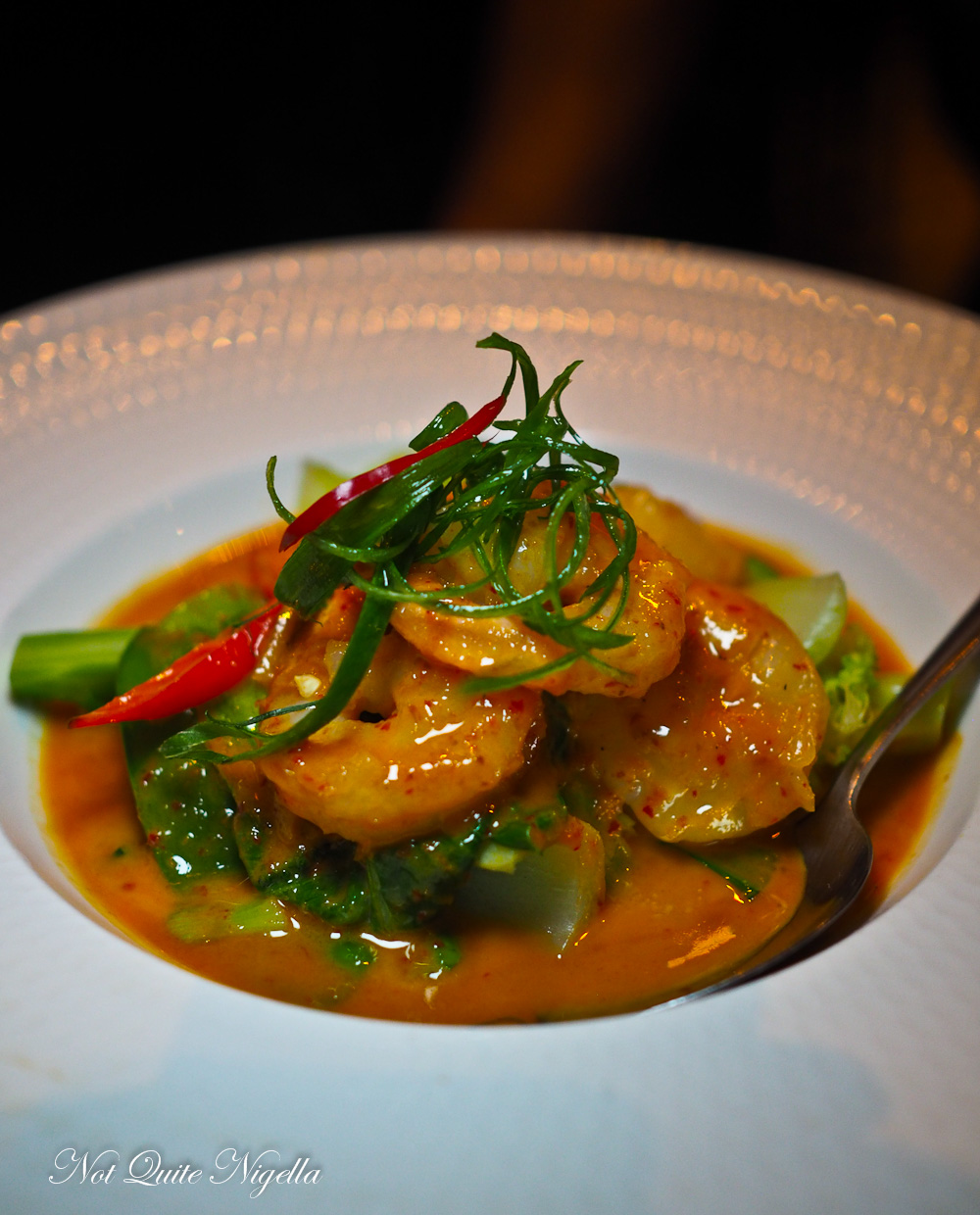 The prawns on this dish are cooked well so that they aren't dry and the choo chee sauce is a bit thinner than I'd like. Perhaps I should have stirred through the fine shavings of kaffir lime on top to make it go together. It's not a bad dish but it isn't my favourite from what we ordered. 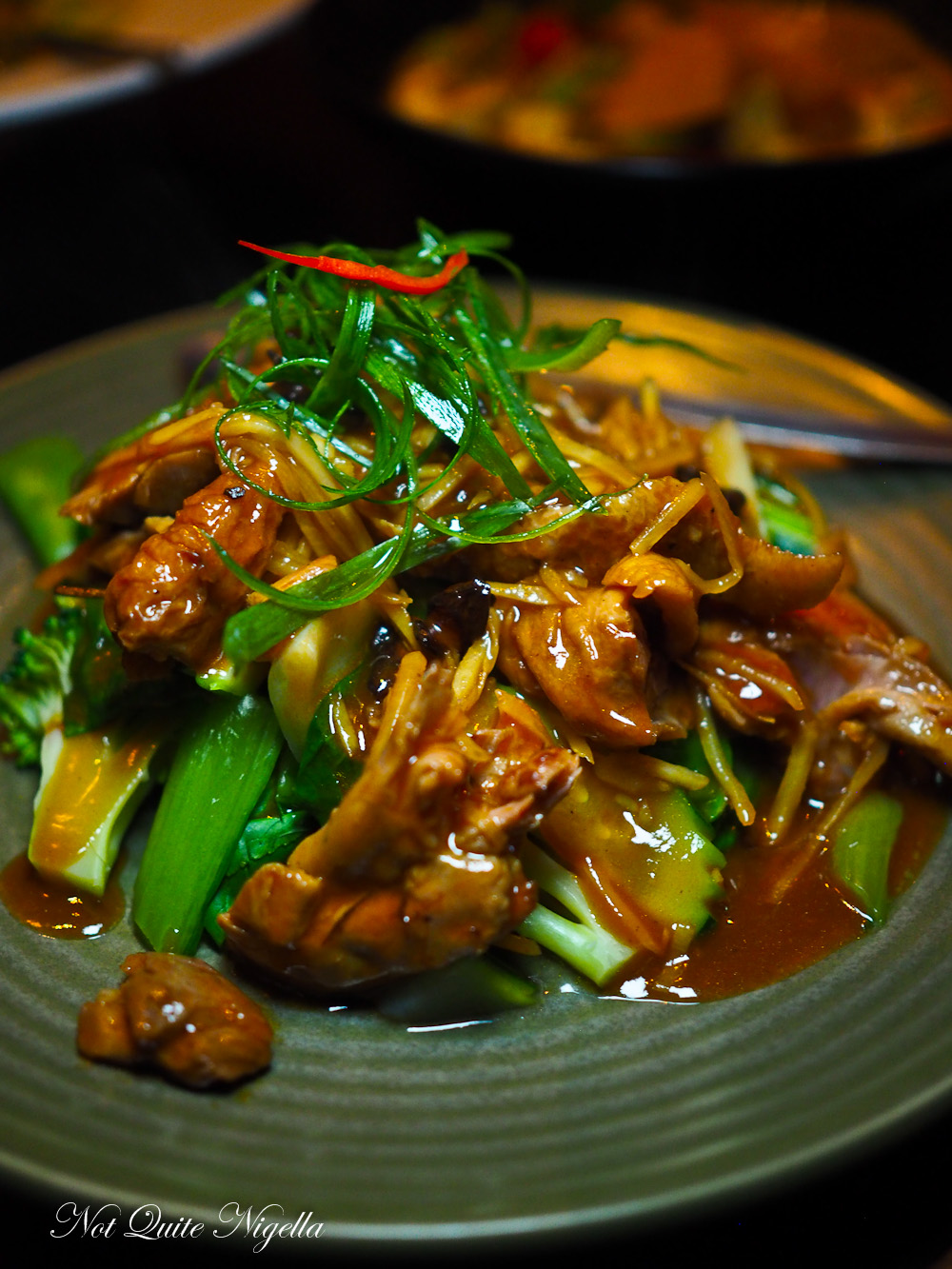 I was originally going to order the ginger duck but they recommended the mandarin duck with boneless roast duck. It's succulent with plenty of citrus sauce and and vegetables as well which makes this a nice complete dish to eat. You do have to like bittersweet sauces for this though.

We discuss the wolf pack, their upcoming own three wolf moon tshirts and how much the boys have managed to eat. Clearly they're practising eating like a wolf. 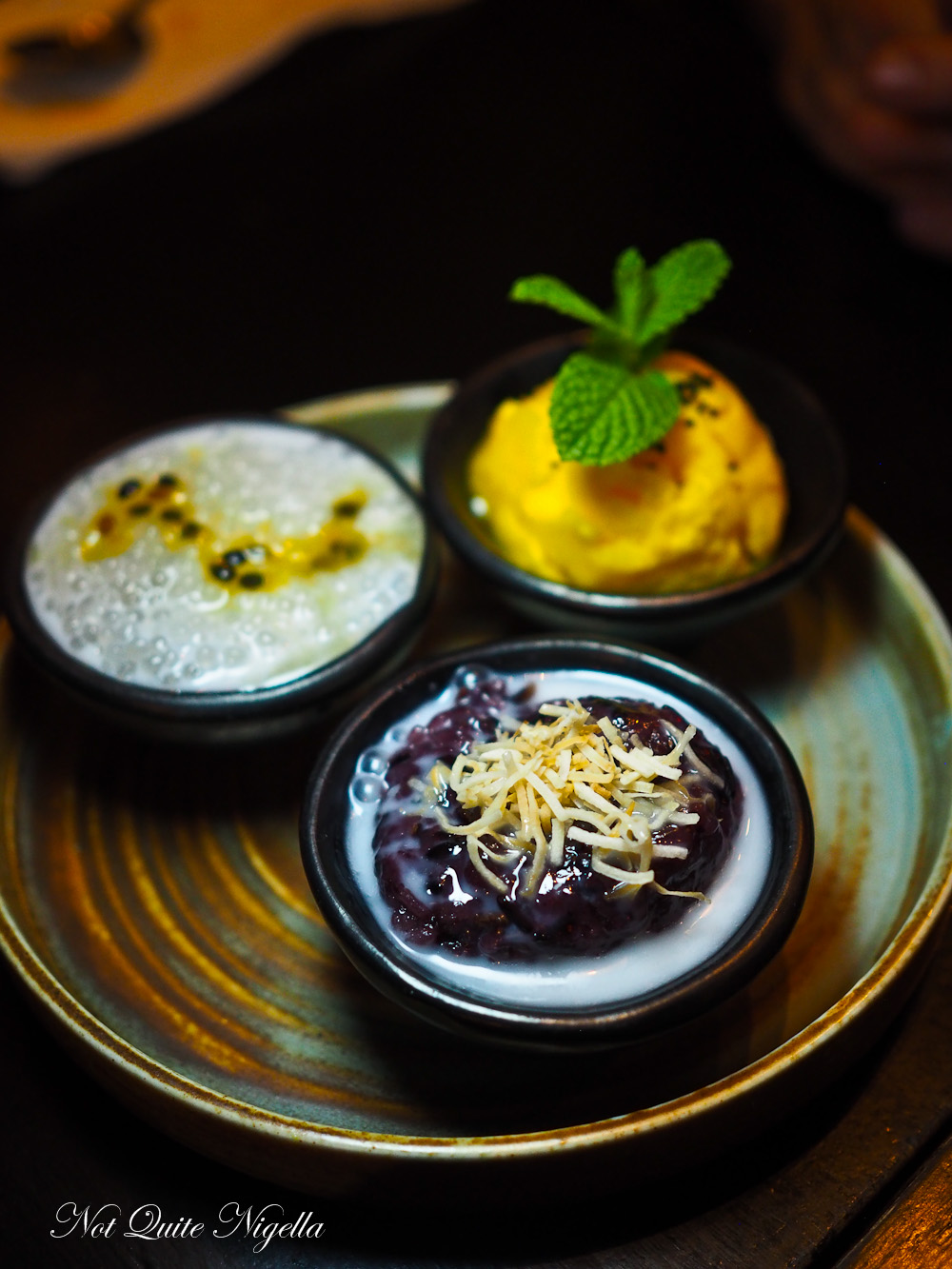 Maybe healthy Nina is rubbing off on us. There's just enough room to share one dessert-the black sticky rice with coconut cream and coconut shreds as well as a sago and passionfruit pudding and mango ice cream. It's actually a three parter dessert so it feels like enough for the four of us to just sample.

So tell me Dear Reader, do you have a wolf pack or a group of people you like to "howl" with? What is your favourite cuisine? Do yu ever ask to be reseated into another area? 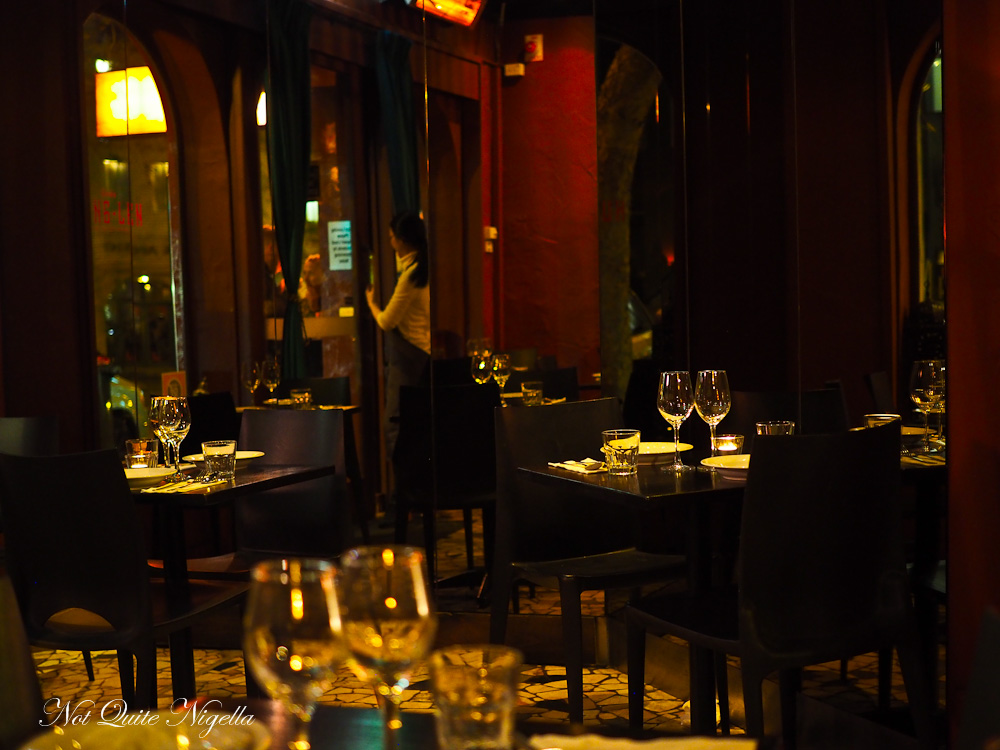