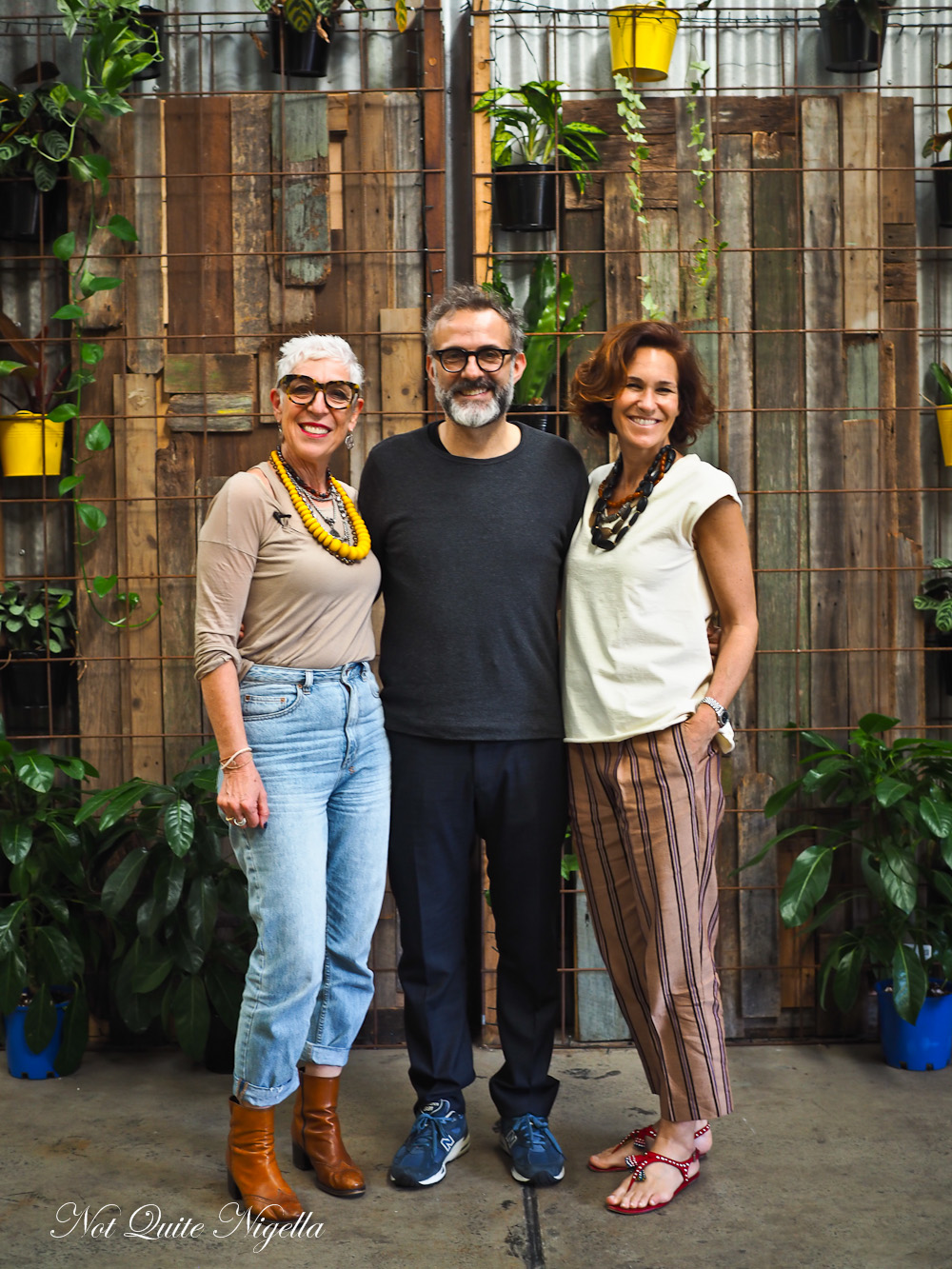 When I first meet Massimo Bottura, I had been warned he was tired. Having just arrived in Sydney for the MAD conference the day before, everyone was fluttering about waiting for him. He was also late. Massimo Bottura is one of a rare breed. He is a three Michelin starred chef and his Modena restaurant Osteria Francescana was placed at number 1 in the World's Best Restaurant at the recent S.Pellegrino World's 50 Best Restaurants Awards in 2016. And he is also very passionate about food waste.

He is also the subject of a movie called Theatre of Life documenting his work reducing food wastage with the "refettorio ambrosiano" and feeding the homeless through this initiative. His driver pulls up to the OzHarvest premises in a Ferrari and Massimo and his wife American born Lara Gilmore alight. She looks fresh as a daisy but he looks a bit tired. But once he gets a tour of the OzHarvest premises in Alexandria with founder Ronni Kahn, he really starts to perk up. He looks around taking everything in. When it comes to sitting down with him after the tour, it's as though he is refreshed. He explains how his refettorio ambrosiano project came about. 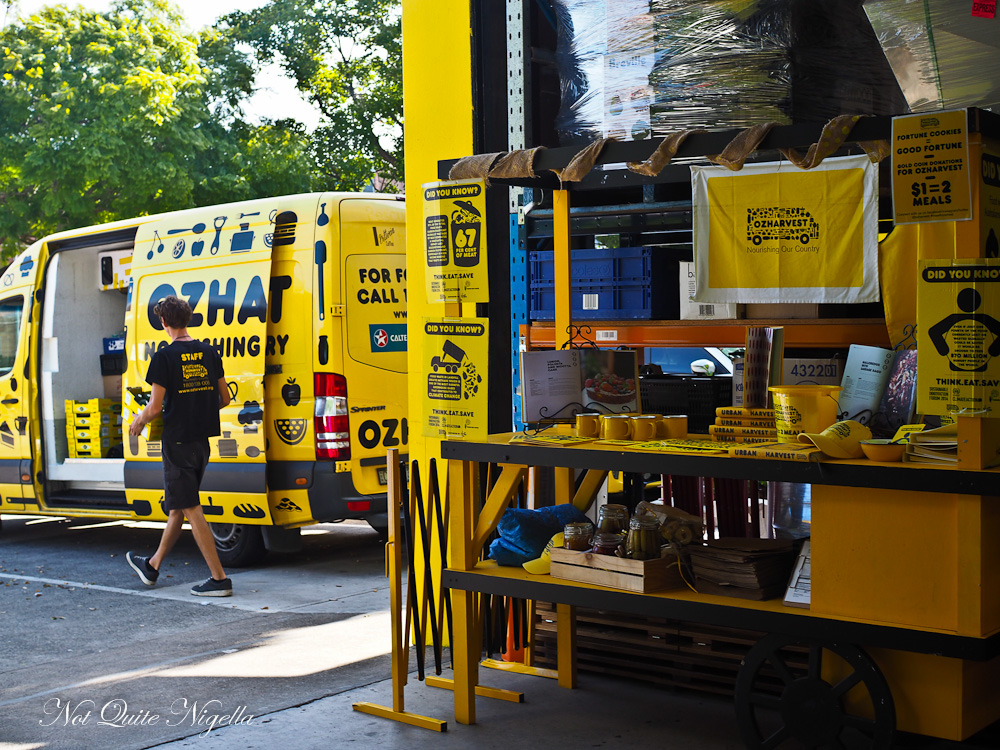 How did he come up with the idea for the refettorio ambrosiano? "That was three years ago. We were traveling from one conference to another. And you know all these chefs we were talking. I was with Rene, David Chang, Alex Atala and we were talking about how tired we were. Just talking, talking, talking about this upscale cuisine. And we were all on the same level and say “Okay...this is time for action”. So it was two years before the universal exposition, the old government started asking me how I can be involved in this or the other, one event. So they want me to cook and they were not interested in my ideas."

"And then you know we knocked at the door of the church in Milan and the Archbishop Scola, he said to me after I was explaining my idea 'Thanks for the energy. Thanks for the passion. You came and you gave us great energies. So in one week, I’m gonna come back to you and tell you our answer.' And one week later, he called me. He said 'Do you want to come to Milan?'". 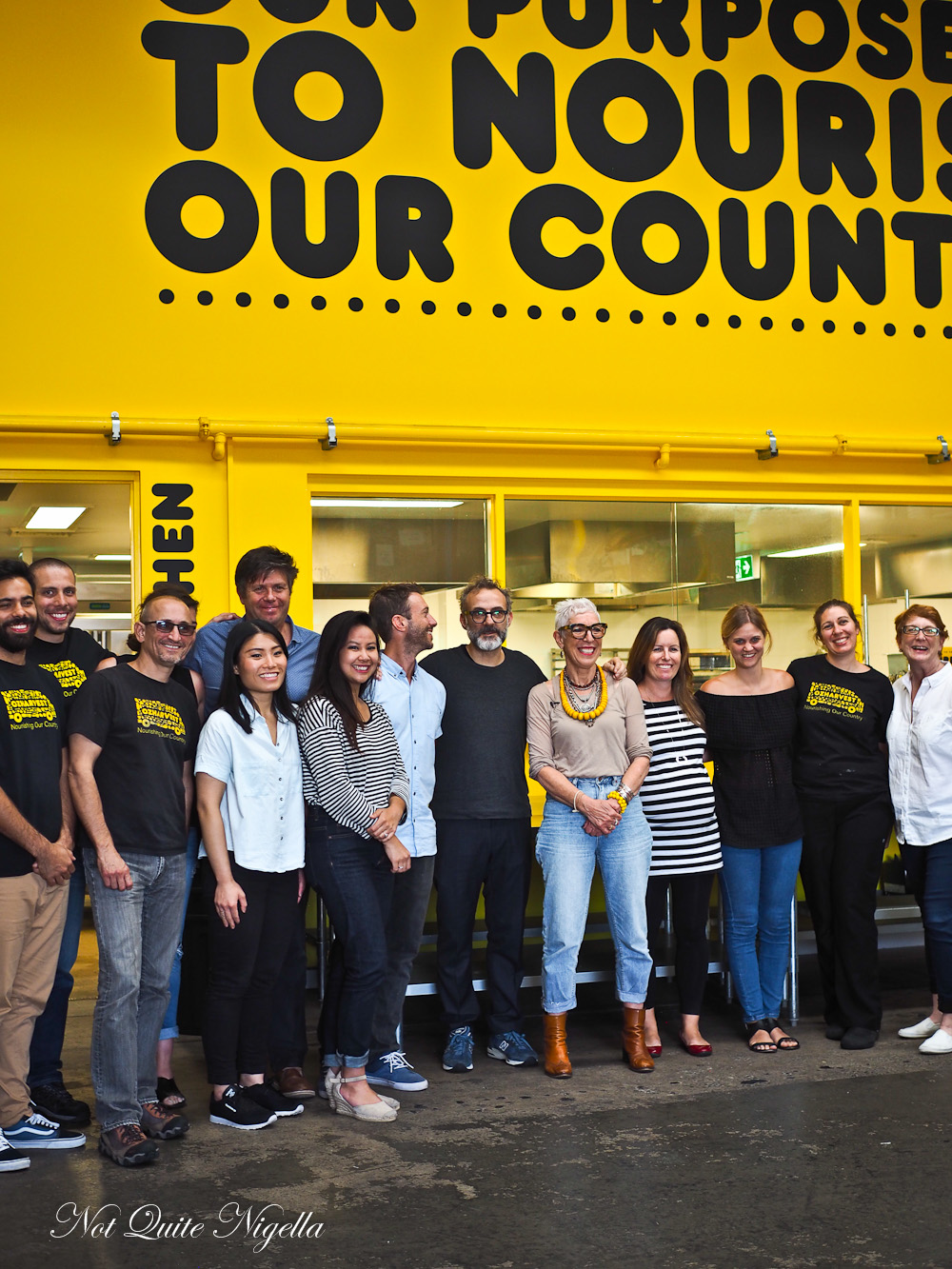 So in my idea...the first idea was like recreate the miracle in Milan in a train station under the train station in Milan like 1950 movie from “Il Verismo Italiano” and the Pope said 'No, no downtown. We to give light to the periphery and the places where like the most the darkest places'".

"And so we found a 1930 theatre in the most difficult neighbor(hood) in Milan...in my mind,there was a refectory, soup kitchen like Leonardo did 500 years ago with The Last Supper... And you know when we saw the place, we said 'Oh my God. This is going to be amazing.'"

Within eight months it was completed. Massimo describes it, "The place is one of the most beautiful places in Milan with full of art, of incredibly unique tables as the “fratini”.  Fratini are like the tables that old monks they were using - very narrow and very long. And because you don’t have to sit in the two major part, just one in front of the other. And you don’t have a lot of space - just a bowl or a place, a glass, and a fork knife. And that’s it. So all these designer thought of making a fratino in 2015 with oak." 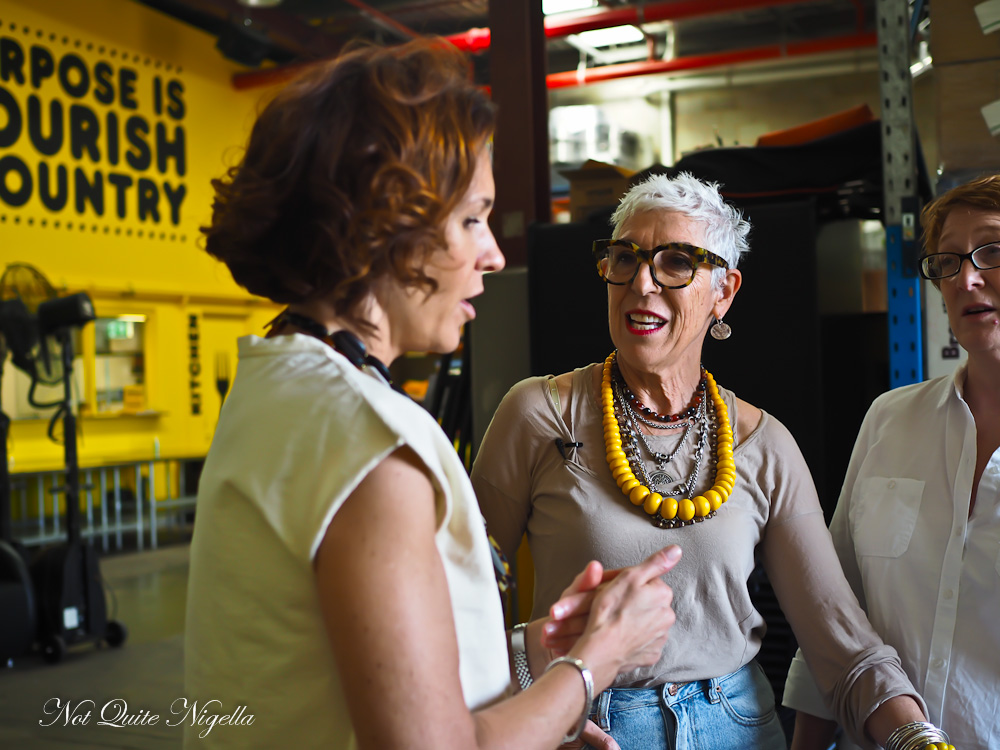 A Party For The Fragile Souls

"And so for us it’s like we want to give the opportunity to give these fragile souls to live..and to spend time in a place full of beautiful art, full of culture. And you know, in the beginning, the project was extremely different - they were like eyes on a...on their shoes, eat in 20 minutes, leave without even saying “hi”. At the end, it was party every night. Party every night. There was around one table - a family was built. A family with an old lady that was a volunteer with another guy that was living on the other side under the bridge, a young lady who just finished  the chemotherapy with his boyfriend that was a very difficult guy. And you know - a family," Massimo explains.

He continues, "It was just incredible. Incredible. And after this you know, with… what I said before, as I said before, I couldn’t do this if I didn’t have Osteria Francescana. To tell you, Osteria Francescana is an experimental place where you build culture, where you build brain, where you build the future. Then to culture, knowledge, consciousness, sense of responsibility. So from culture to sense of responsibility is very quick step and you know, we did that and the first thing we thought after we just stepped back because we you know we have to get back to our life and we left this incredible heritage to all the volunteers there. Actually one volunteer is coming every Saturday to Osteria Francescana to keep learning." 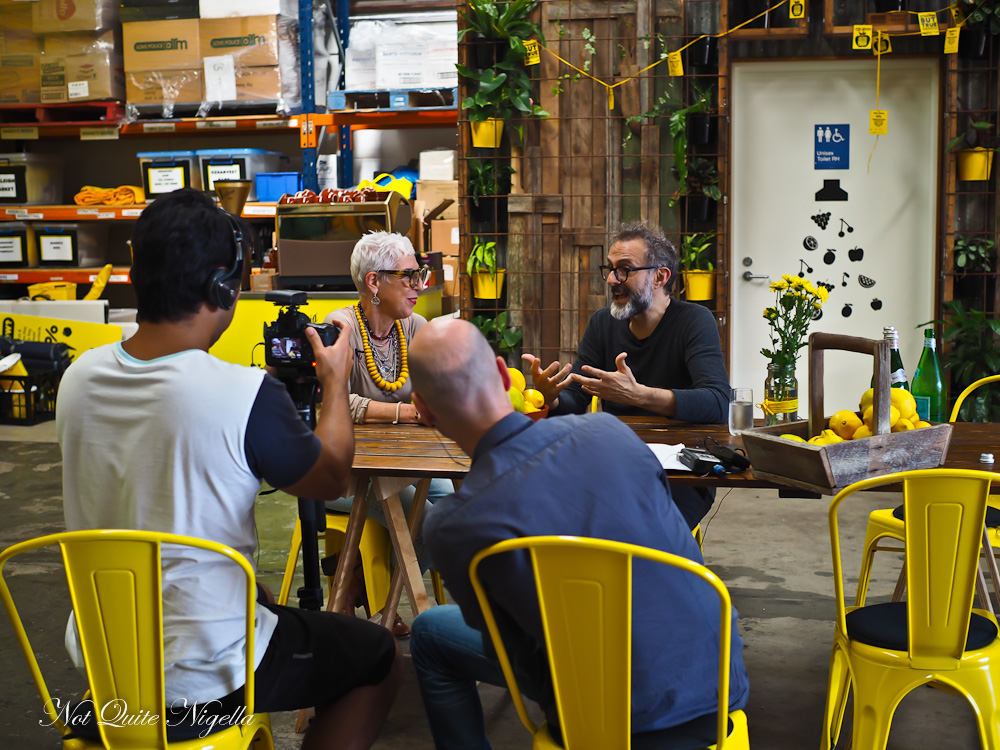 Learning to Bake Bread from The Best Chefs in the World

They also learn from the best in the world. "Alberto learned how to make break in 60 different way from the 65 best chefs in the world. It is the heritage of 7 month of refettorio. And it’s like he didn’t have an idea of what was baking bread before starting there. Then when he was there as a volunteer, we didn’t know what to do with the bread so we said “Okay Alberto is gonna focus on bread.”. So every chef was coming like teaching him his way to make bread - in Japan, in South America, in France, on the Alps, on the seaside, in Sicily. Phew. That’s amazing," says Massimo.

Not a charity project but a culture project

Massimo is clear that it is more than just food or charity, "You know, in my idea, that’s why I say there was not a charity project...In my idea, the most important was the culture project. That means we need a chef like that so lot of spotlight on us. To move the spotlights from us to the people around us. We have to show through the past so as my Grandmother was teaching me not to waste, you know I’m from Modena in Italy. So Modena is in the heart of the food valley. And when we were like killing pork and you know pork was part of the family. And you know my grandmother was keep saying, you know this animal is giving his life and so is a spiritual act. We have to use every single part of the animal because you know you take a life from an animal and you have to respect this." 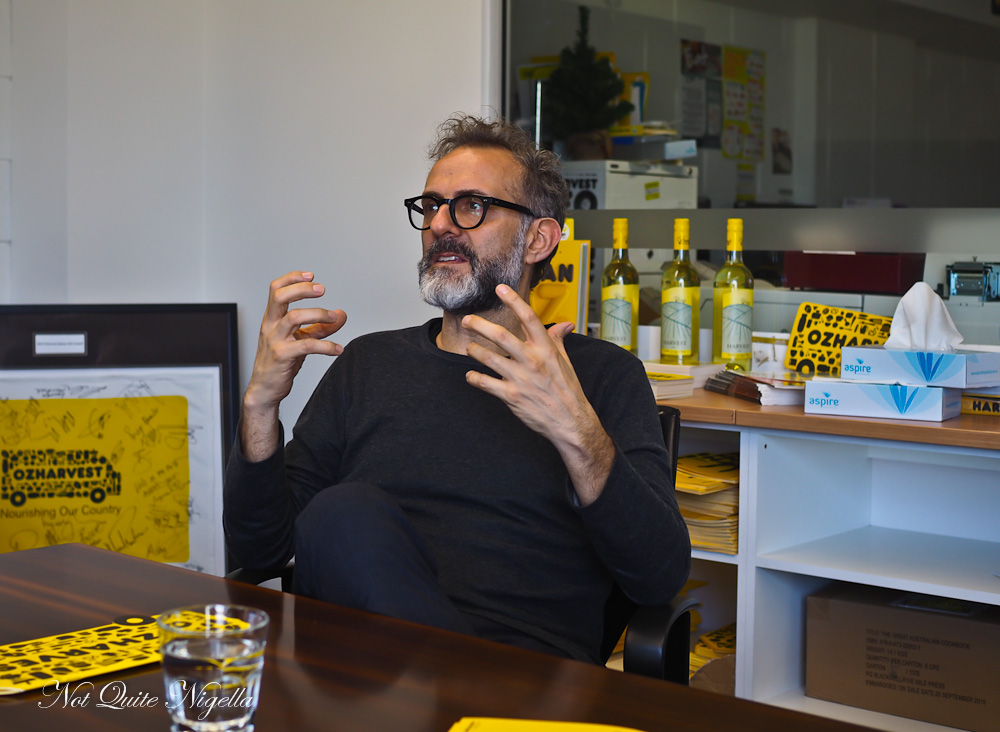 What Next? The Brazil Olympics

Massimo has plans for 2016. "We have a very deep conversation to open one (a refettorio) in Brazil during the Olympics, in the favelas with Gastromotiva that are like  part of the refettorio in Milan and they went crazy about this project. And so they want to do the same project in Rio de Janeiro with a cooking school in the afternoon to teach the women how to you know work and give them an idea what can be different job, different future for them...Me and Lara, we create a foundation.. We raise money and we use my image to collect money to help the refettorio, to maybe pay the art or to buy the chair or whatever.

"In Brazil, everything...it is important that in each place we have, we should have important partners. In Modena, we have Modena Tower - a consortio of 60 of the best restaurants in Modena. In Bologna, we have “Chef to chef” - is an organization of the 45 best restaurant in the region. So each week, there gonna to be one restaurant taking care of that...In Brazil the Gastromotiva." 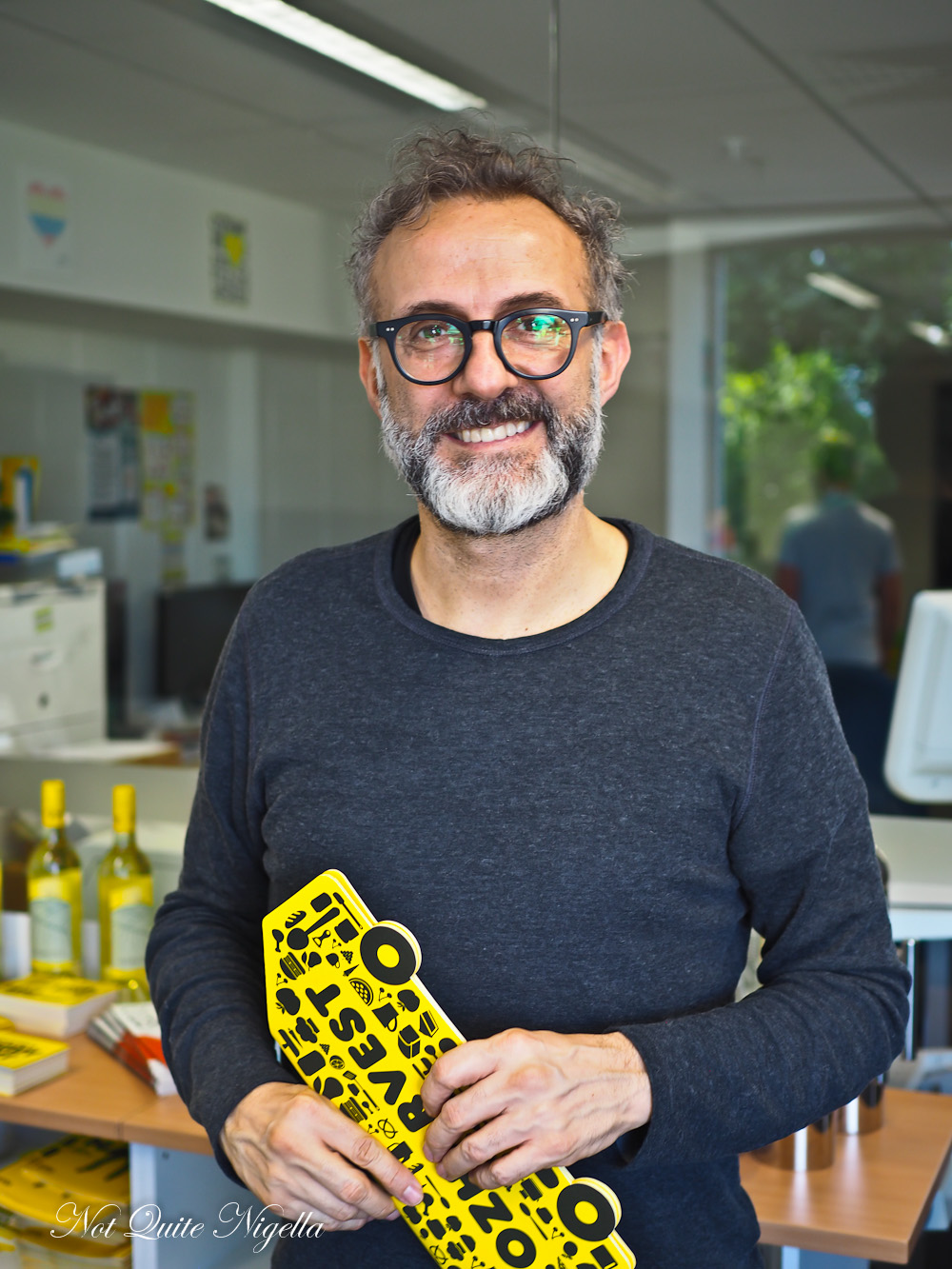 The Role of Emotion and Feeling in Cooking

For Massimo, "Cooking is not mathematical. Cooking is emotional. And the most important part is like when people are traveling from all over the world to eat at Osteria Francescana, they have to get emotion. If you don’t get the emotional part, you don’t .. it doesn’t stay in their memories you know. That’s why when I reflect about my emotional part is, the best part was when my mum was cooking for me. Because you know she was cooking with her heart and the food she was cooking was not perfect but was emotional.

He continues, "You know all these memory of a mortadella sandwich. You know all these ideas that reminds you of the childhood.  The crunchy part of the lasagna...you know...so think about any million kid that is growing with a table of lasagna there , stealing just the best part. All the rest he doesn’t care. That part is the best part. So that’s the point I want to touch. The point of memory, the point of emotion. Cooking is an act of love."

So tell me Dear Reader, how do you try and reduce waste? What do you think about Massimo's idea? Did any part in particular resonate with you?

During special cinema screenings via Demand.film, part of each $25 ticket sold will help OzHarvest to provide meals for 14 hungry Australians. In Australia, the movie is being released via Demand.Film. This ‘cinema on demand’ platform allows everyday Australians to use social media to crowd-source an audience for film screenings at their local cinema with zero financial risk. It’s like being given the remote control for your local cinema. Demand.film, in turn, reserves the theatre, manages ticketing, and ensures the delivery of the film. Once the ticket threshold is reached, everyone just sits back and enjoys the show.