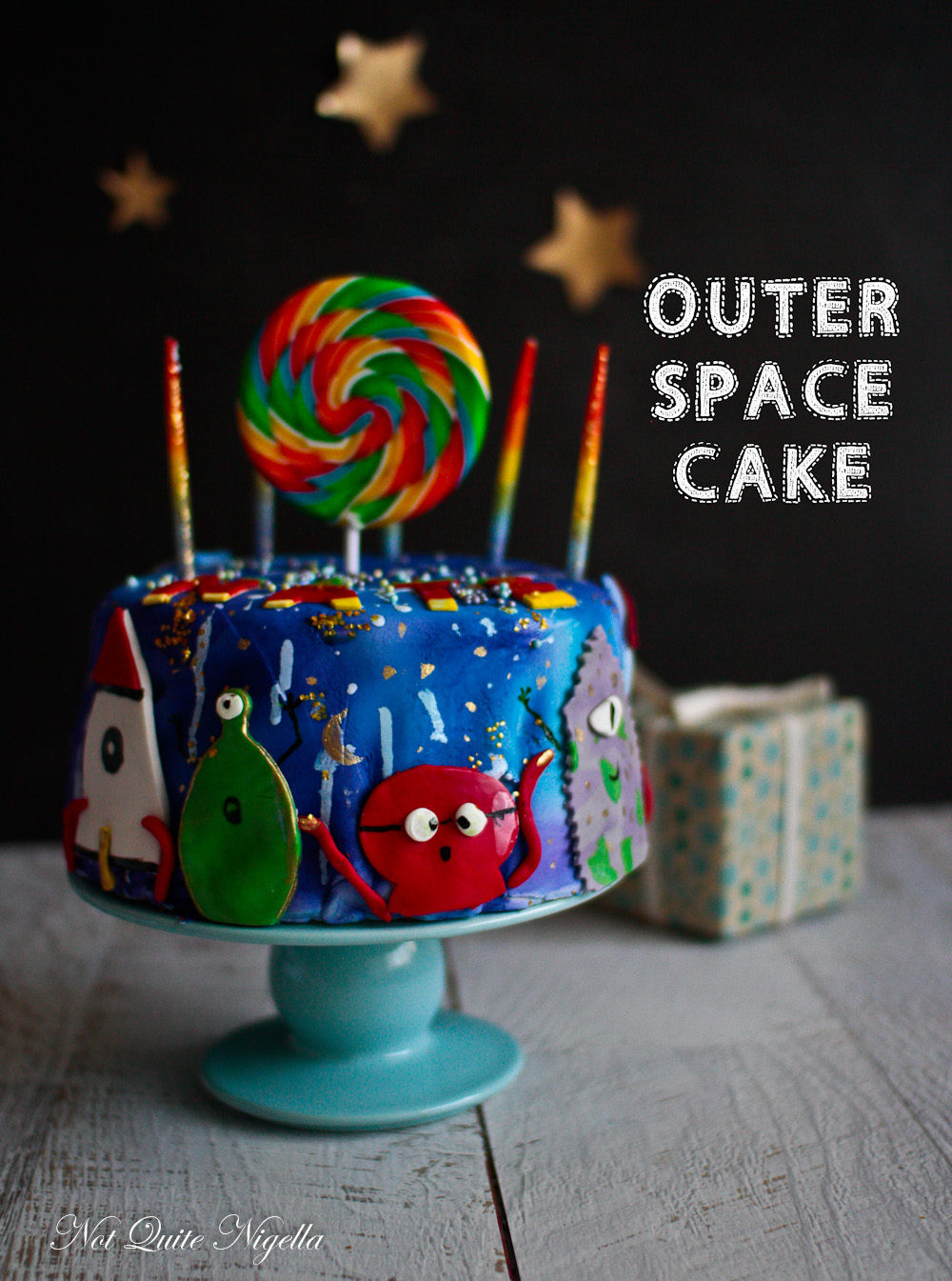 A few weeks ago, a little boy called Nate turned one. His mum Elly is a friend of mine and my hairdresser so Auntie Lorraine happily volunteered to make his first birthday cake. I know he won't remember it until he sees it when he is older but I hope he liked his very own Outer Space Cake!

I quizzed Elly about what sort of things that Nate liked. At the moment he likes grabbing things and pulling them down and pretty much has a fascination with everything. So I was a bit stumped because at such a young age he really didn't have any clear favourites (cut to my parents asking him if he has a share portfolio and a career projection). 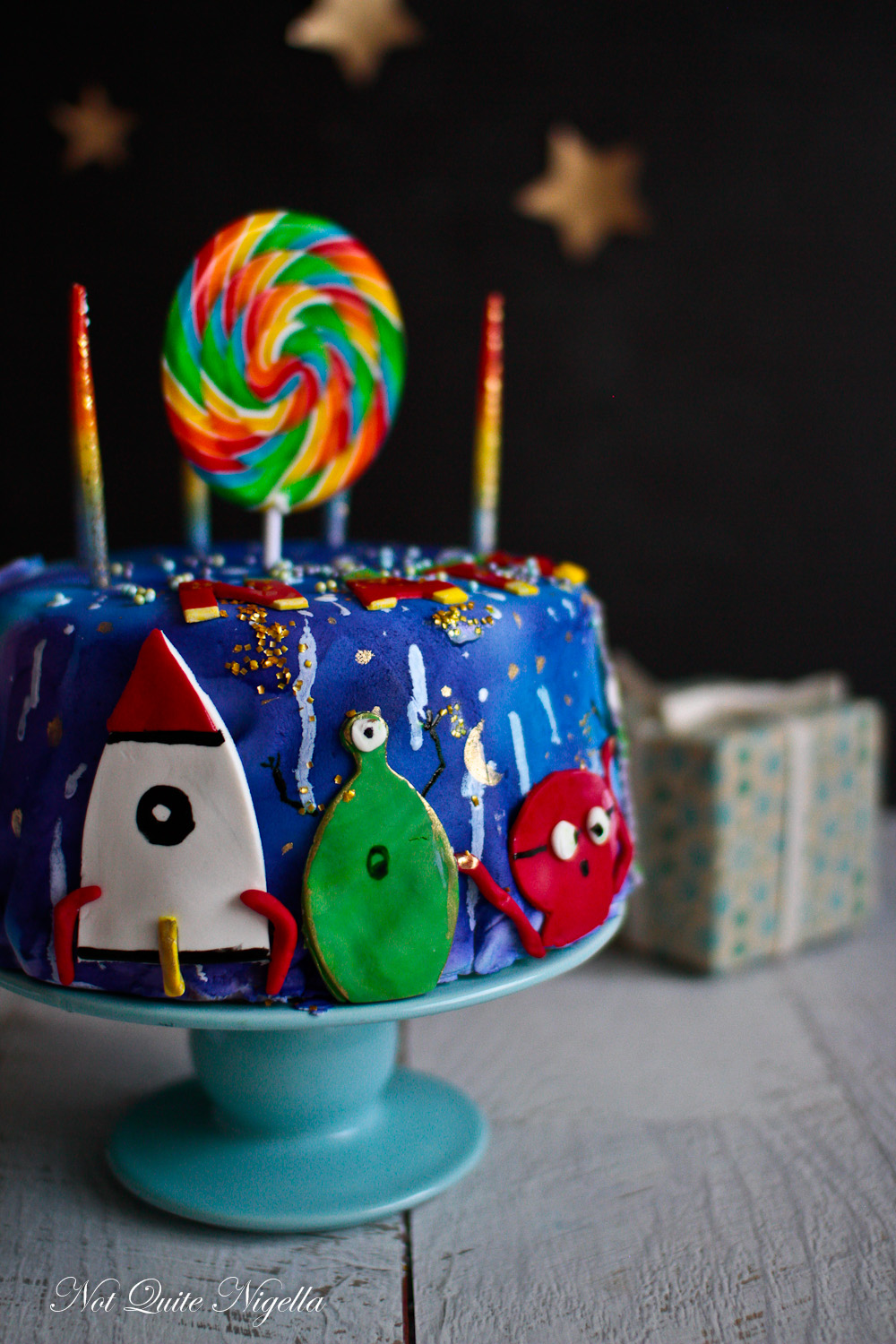 And then I thought back to what Mr NQN was like as a boy and he said that he wanted to be an astronaut. Don't most kids want to explore outer space? Space it was!

So with the theme sorted I got to work. I was actually going to be away when his party was on but I wanted to make a cake that could withstand the hot November weather and be easy to transport and last a couple of days. It would have to be a chocolate mud cake but not in regular chocolate but mango white chocolate for something different. 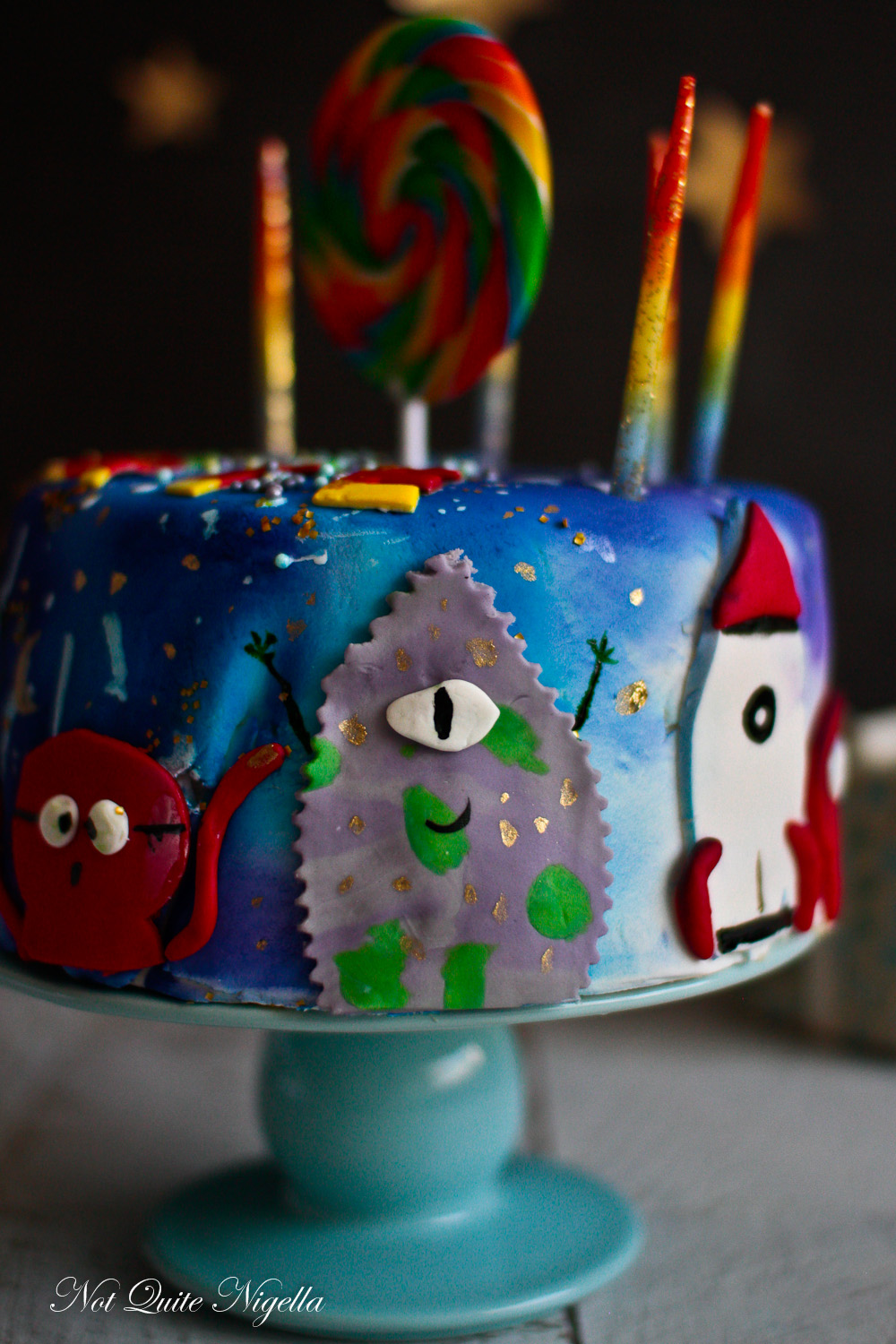 I baked the cake, covered it with fondant and then looked at it. It was just too...white. So I jumped in the car and drove to a cake decorating place where I procured some spray mist in purple and blue. At home I sprayed the cake with these two colours and then dotted it with edible white and I had a universe! 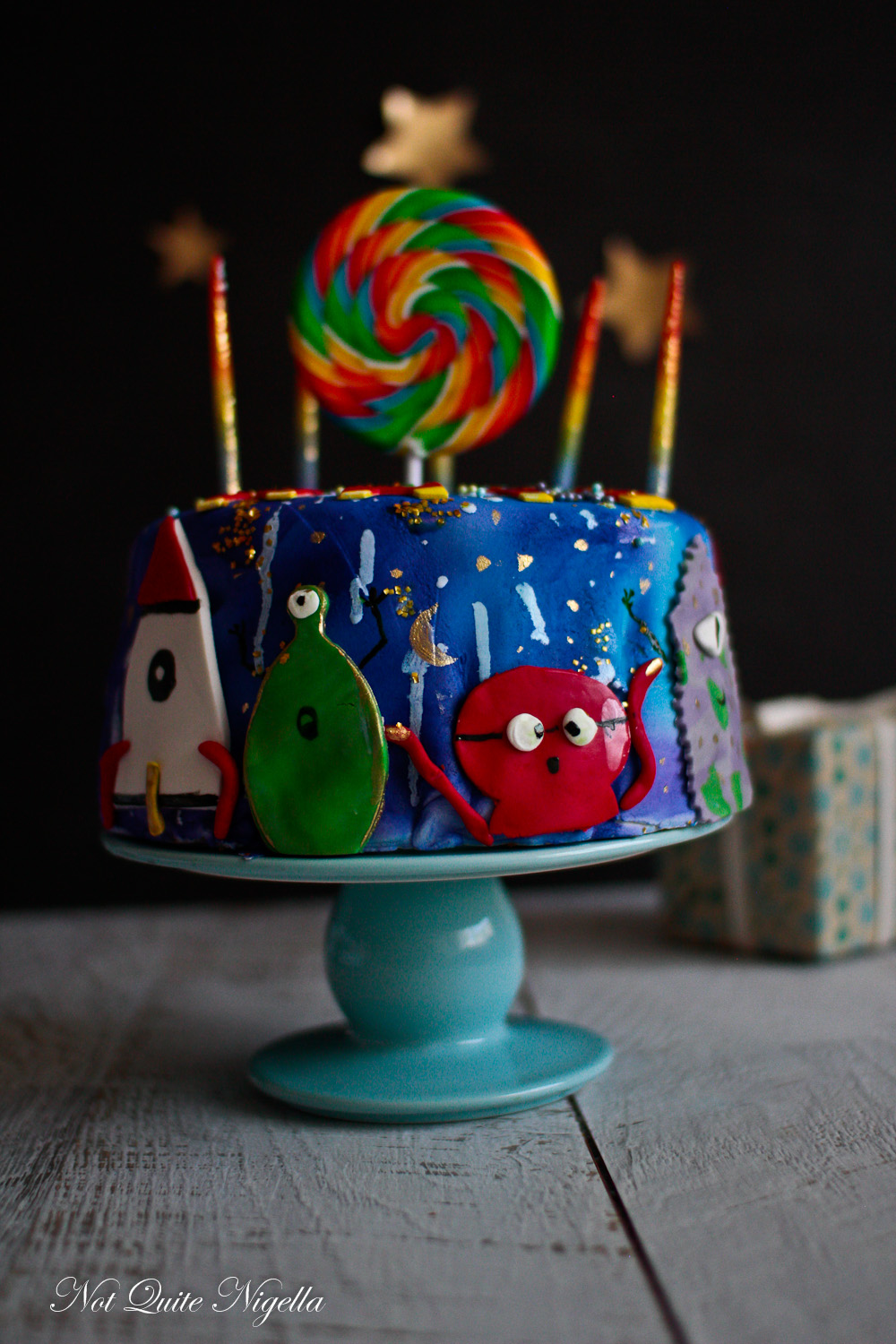 The aliens and spaceships were easier than I thought. Because apart from E.T. (he's real ok!) we can only guess at that they might look like. But I didn't want a scary cake, I wanted one where the aliens were friendly. So I made them wave at him. I wanted them saying "Hi Nate!". Maybe one day he will become an astronaut and his first birthday cake will come up in conversation.

All in all I don't think it's a bad cake but when I look at it there are bits that I would change. I tried to echo the colours of the candles with Nate's name but I think it ended up looking a bit odd. But I am told that it was so much of a hit with Nate that he almost put his foot through it! ;)

So tell me Dear Reader, what were you interested in as a child? And do you believe that there is life in outer space? 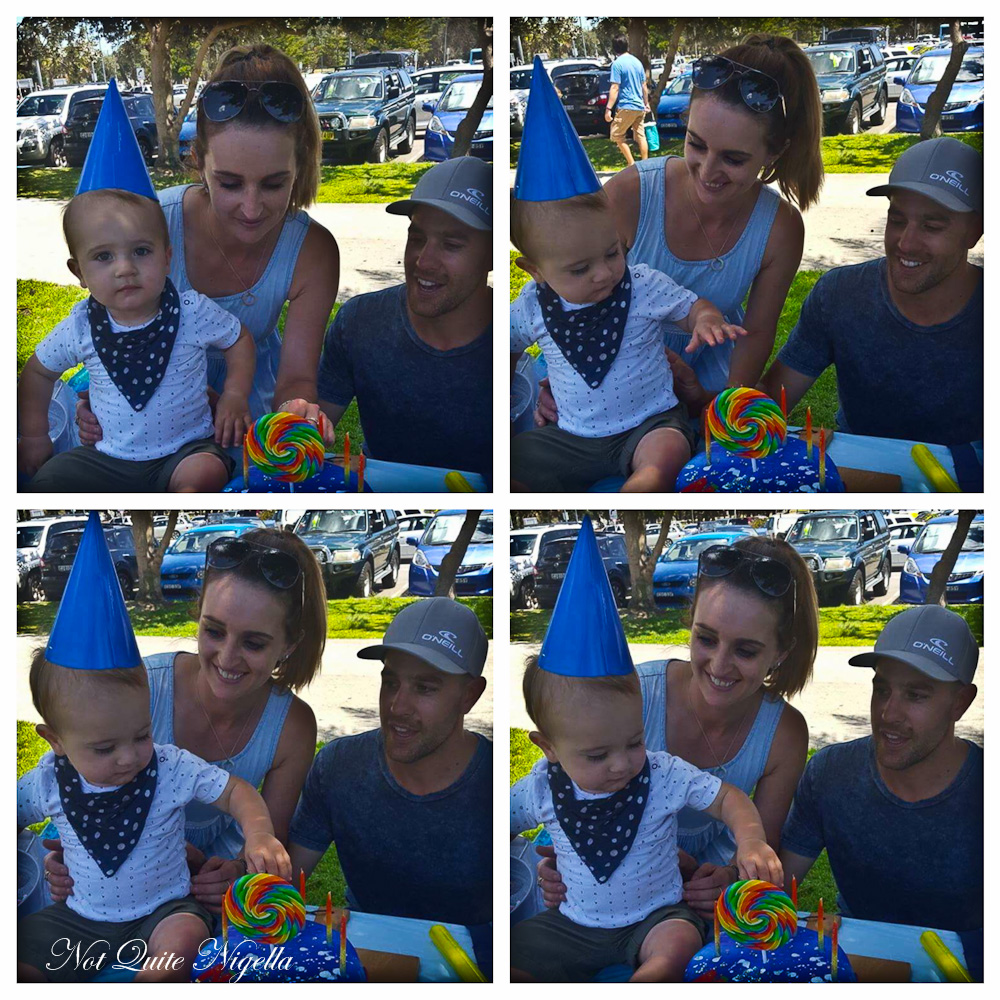 This cake is best made over a 2 day period so that the cooked cake has time to firm up.

Step 1 - Preheat oven to 150C/300F and line 2x20cm/8inch pans on the base and sides with parchment. In a large pot melt the butter, chocolate, sugar and mango nectar and stir until smooth. Remove from heat and allow to cool for 15 minutes. Whisk in the eggs and add in the flavour and colour.

Step 2 - Take a large mixing bowl and place the flour, cornflour and baking powder in it and whisk to combine. Make a well in the centre and ladle in some of the wet mango batter. Keep adding it ladleful by ladleful-lumps won't form if you add the liquid in gradually. Divide the resulting batter in the two tins and bake for 1 hour 30 minutes or until you can press down in the centre and it is not soft. Cool in the tin and wrap up in clingfilm. This cake is best made a day ahead of time.

Step 3 - Make the ganache by placing the chocolate in a double boiler. Heat the cream until hot (I did it just in the microwave) and pour over the chocolate. Use the heat from the double boiler to make sure that all of the chocolate is melted and smooth and then refrigerate until firm-ish. You want it spreadable but not hard. 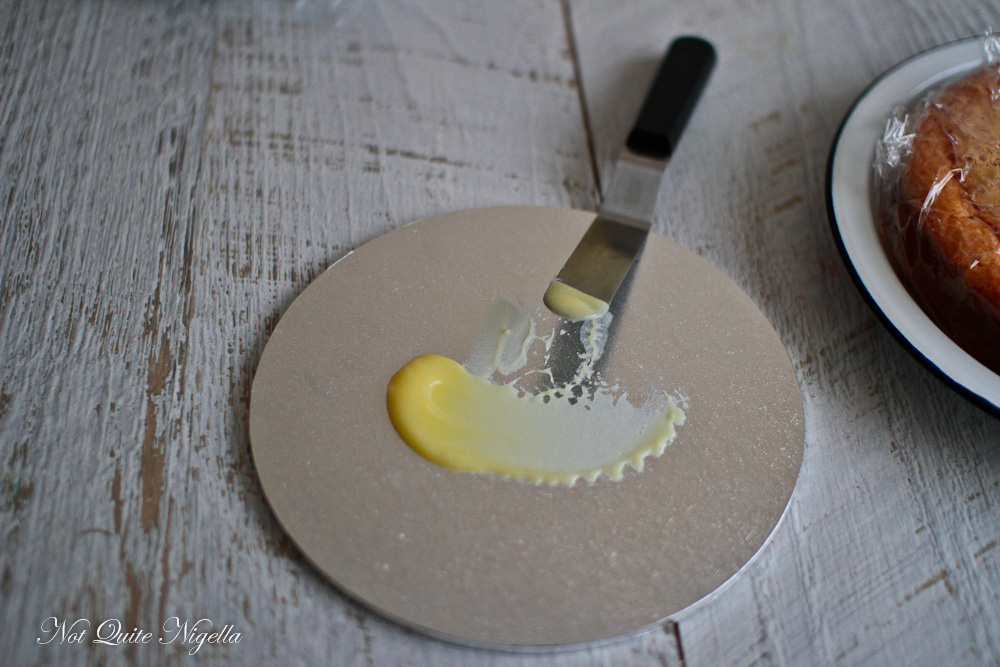 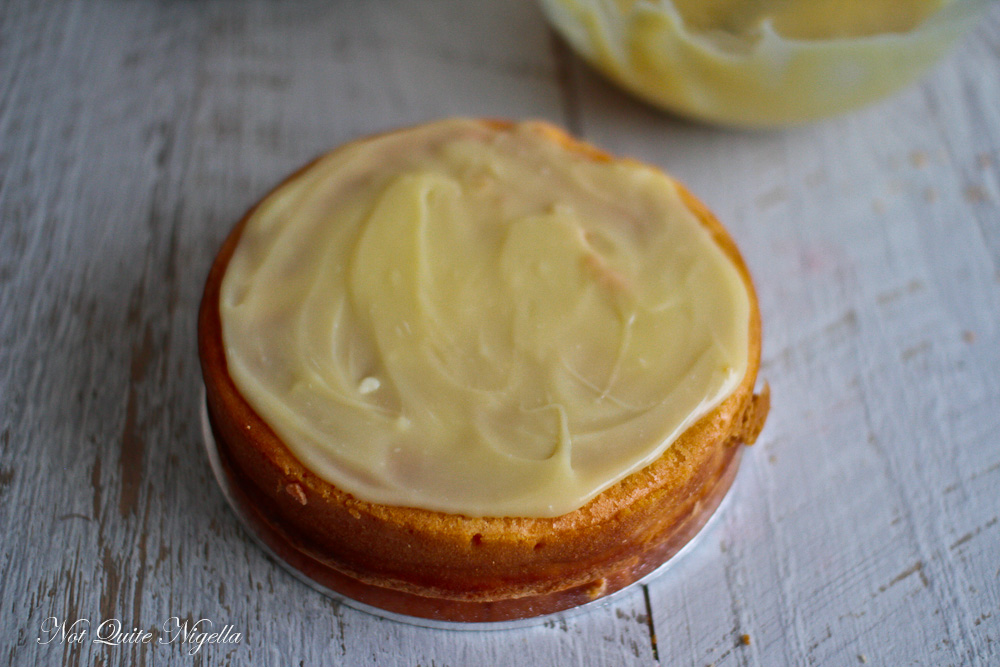 Step 5 - take an angled spatula and a glass of water and dip the spatula in, tap it on a teatowel and the smooth the sides. The water acts as a smoother. Smooth the cake all over the top and sides. Refrigerate until firm. 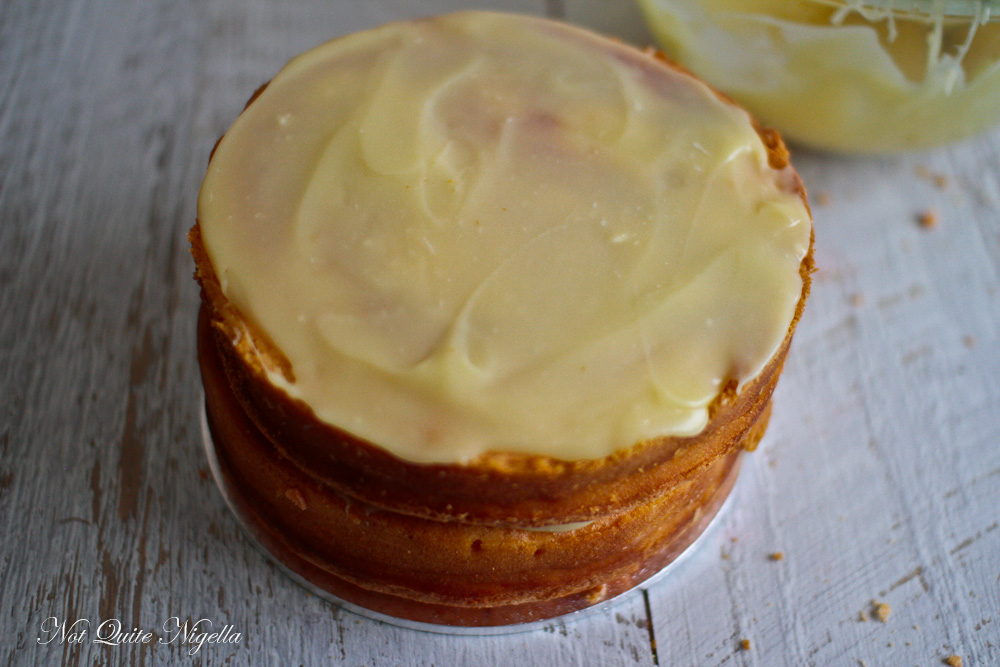 Step 6 - Take the white fondant and sprinkle cornflour on a large clean surface. Roll it out and then carefully lift it on top of the cake. Smooth it down and cut off an excess folds on the side. Use clean and dry hands to smooth it down and then a paring knife to trim the bottom of the fondant. 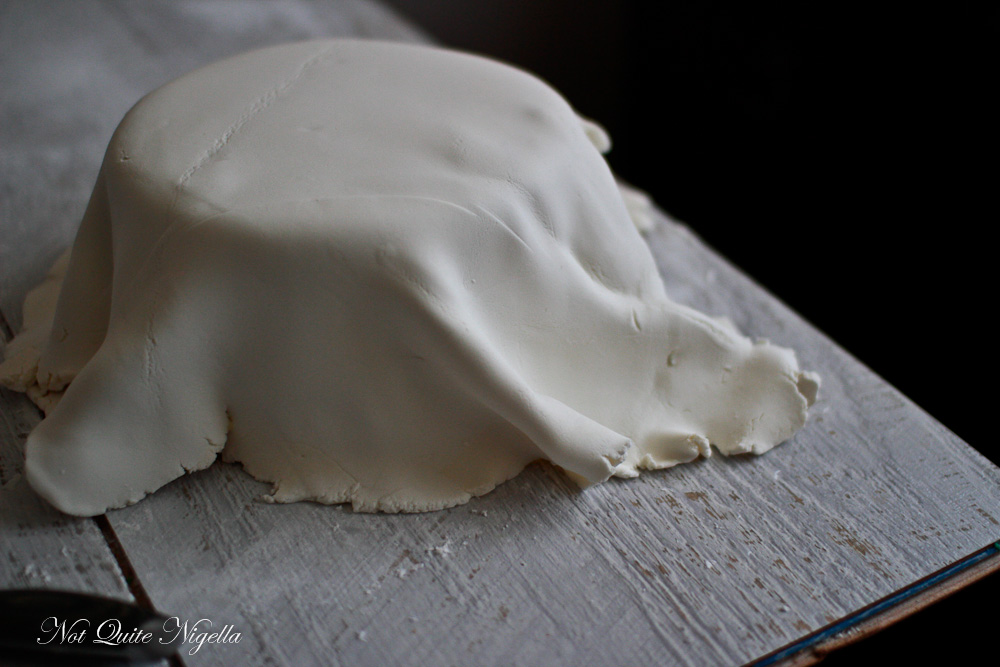 Step 7 - Spray patches of the cake with the purple mist spray and then fill on other patches with the blue mist spray. Then take the white white edible colour and drop or flick it against the cake for stars. 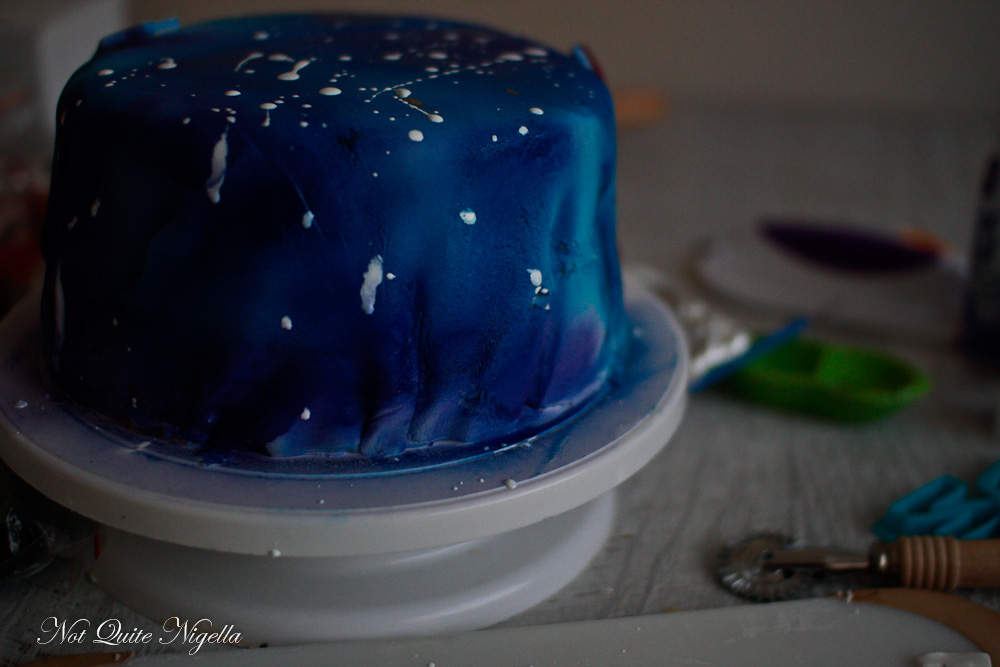 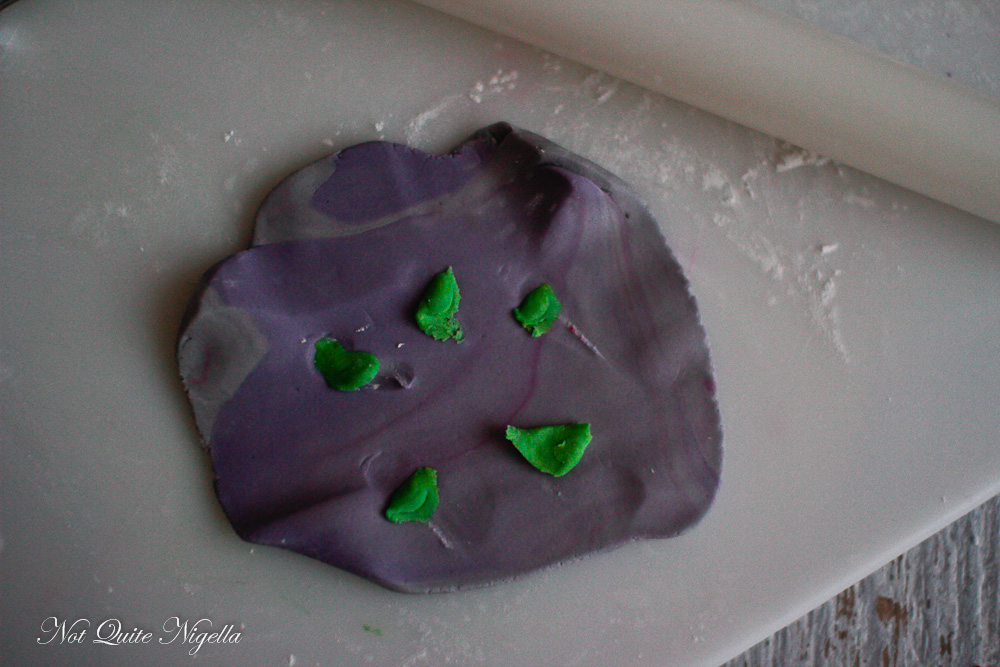 How to make the spotted alien body

You can also cut out a name using letter cutters. Use a little water and a brush to adhere the letters, aliens and spaceship to the cake. Then sprinkle edible gold dust on top to give it on final magical touch! 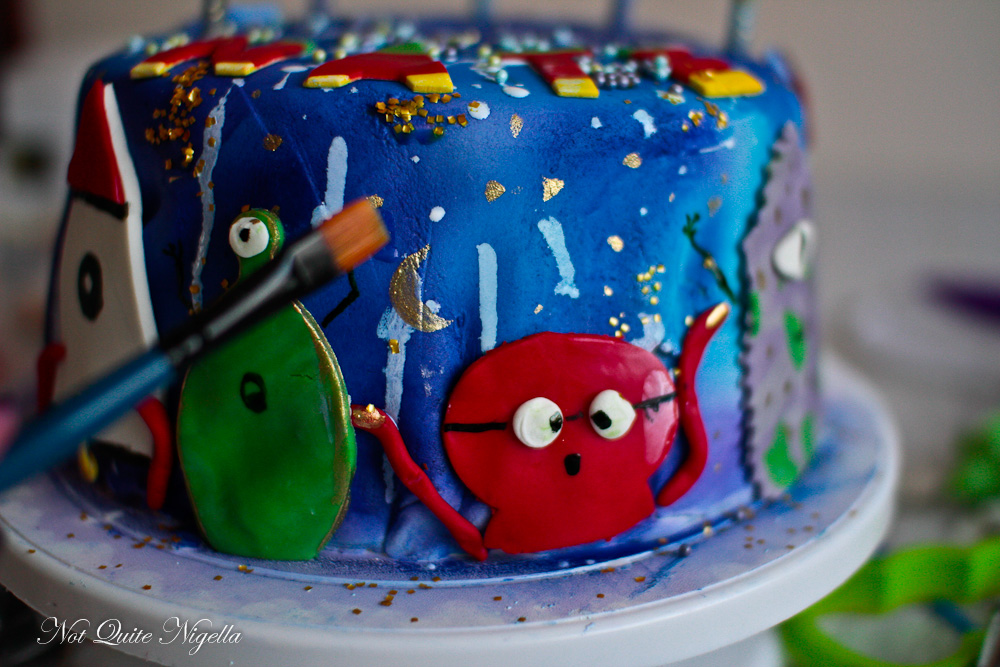 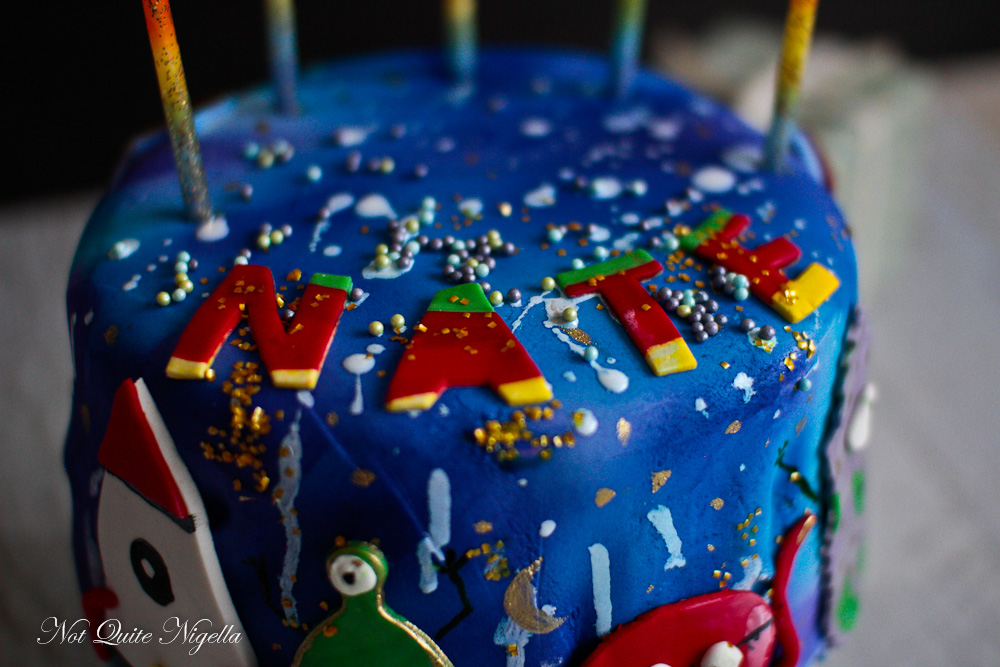