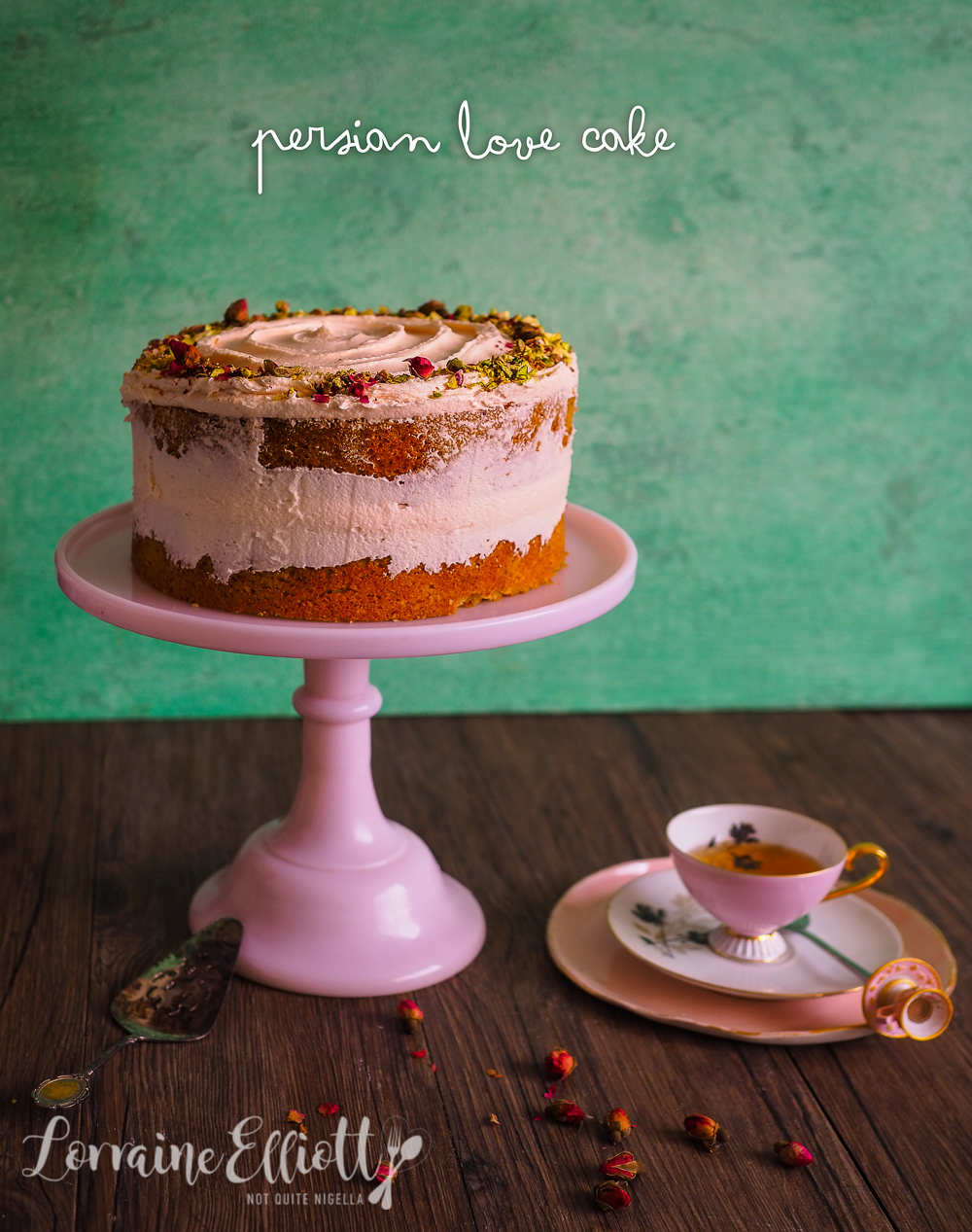 Looking for a special cake to make this Valentines Day? Look no further than this pretty pink Persian Love Cake. An almond and cardamom scented cake is brushed with rose syrup, layered with pastel pink rosewater buttercream and decorated with pistachios and edible roses! I called her Daria. 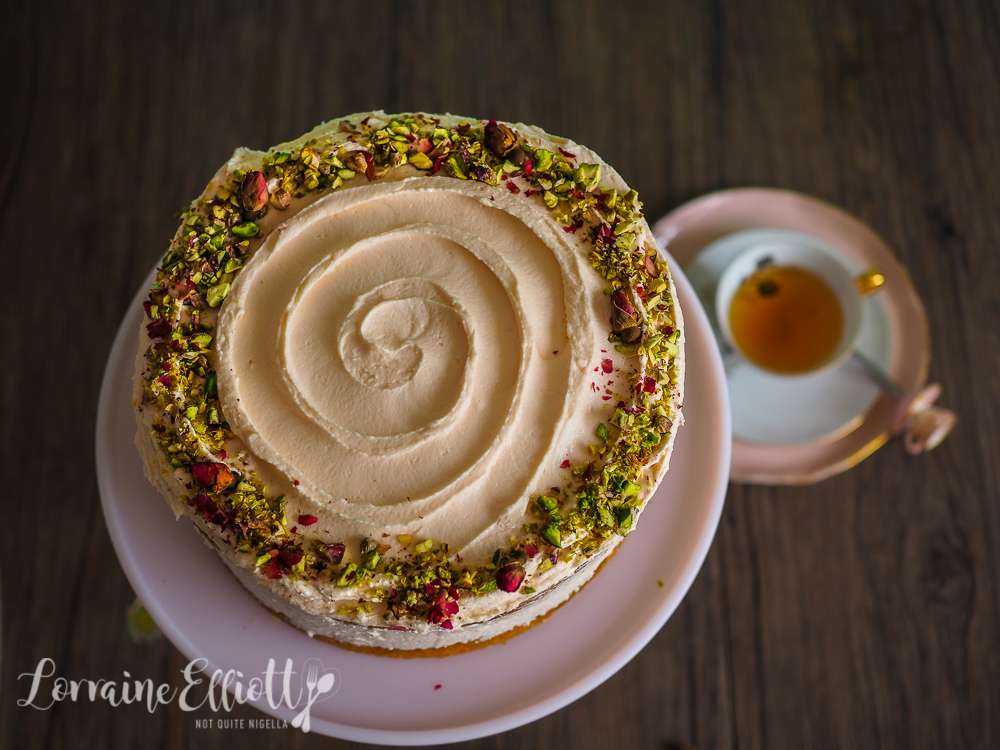 I was inspired to make this cake by a bakery in Edinburgh called Love Crumbs where we ate a similar cake. I adored the simple decorating job they did and the gorgeous rose flavoured buttercream and fresh sponge cake. I gave Daria a bit more exoticness by adding cardamom and to the cake and adding some ground almonds to the cake part.

It's almost time for Valentines Day and for the first time in ages, we are going out to dinner. However since Mr NQN hates the forced atmosphere of Valentines Day and set menus we are celebrating it on the Saturday night instead of Friday night. 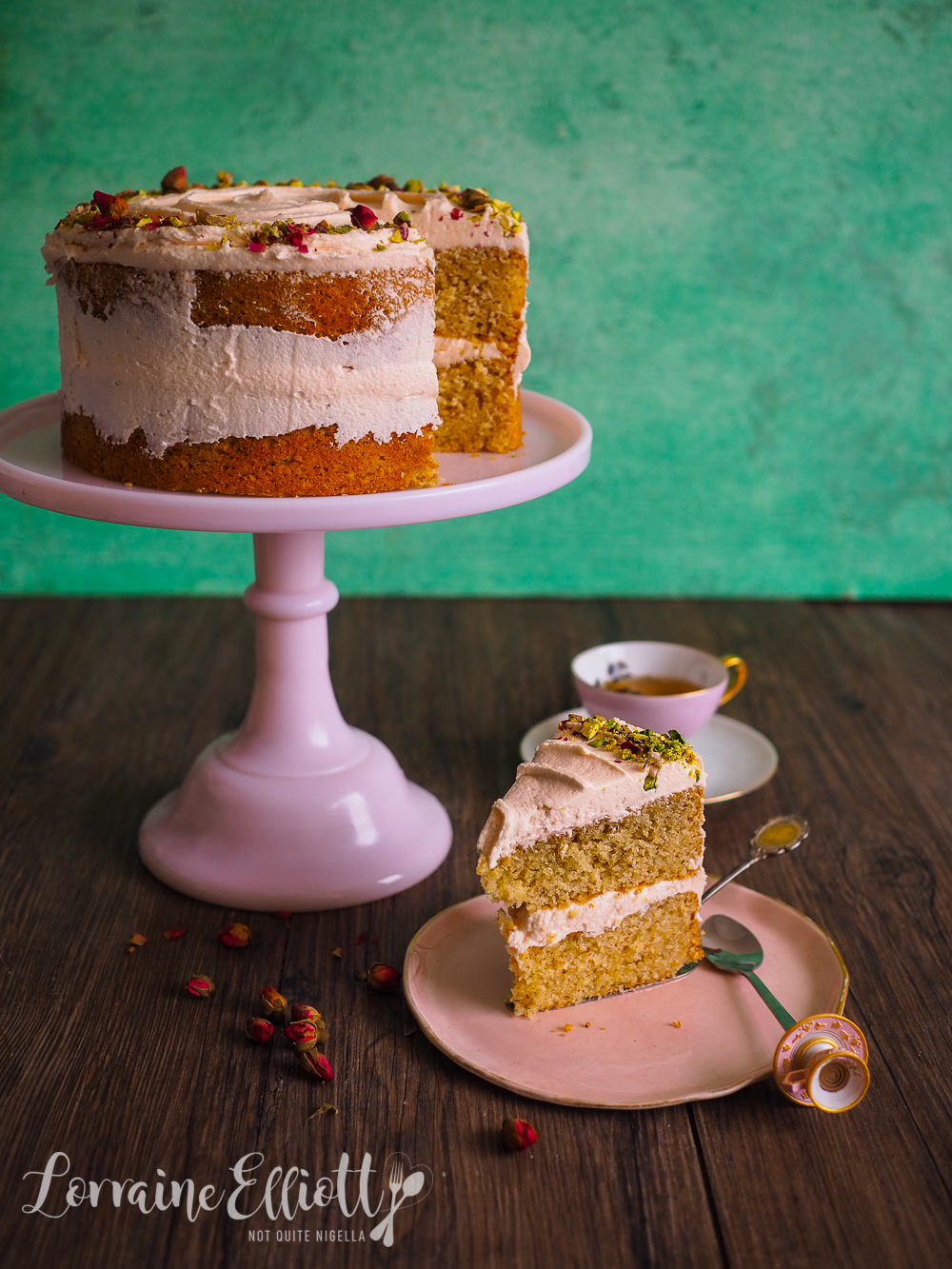 Although we've been together for quite a while, I recently discovered it is possible to still be surprised by your spouse. I don't think that's really a bad thing. Mr NQN calls me an enigma but he had his own enigmatic moment the other day.

"Do you know that I have a famous twitter follower?" he said as he was scrolling through his twitter feed on the couch. 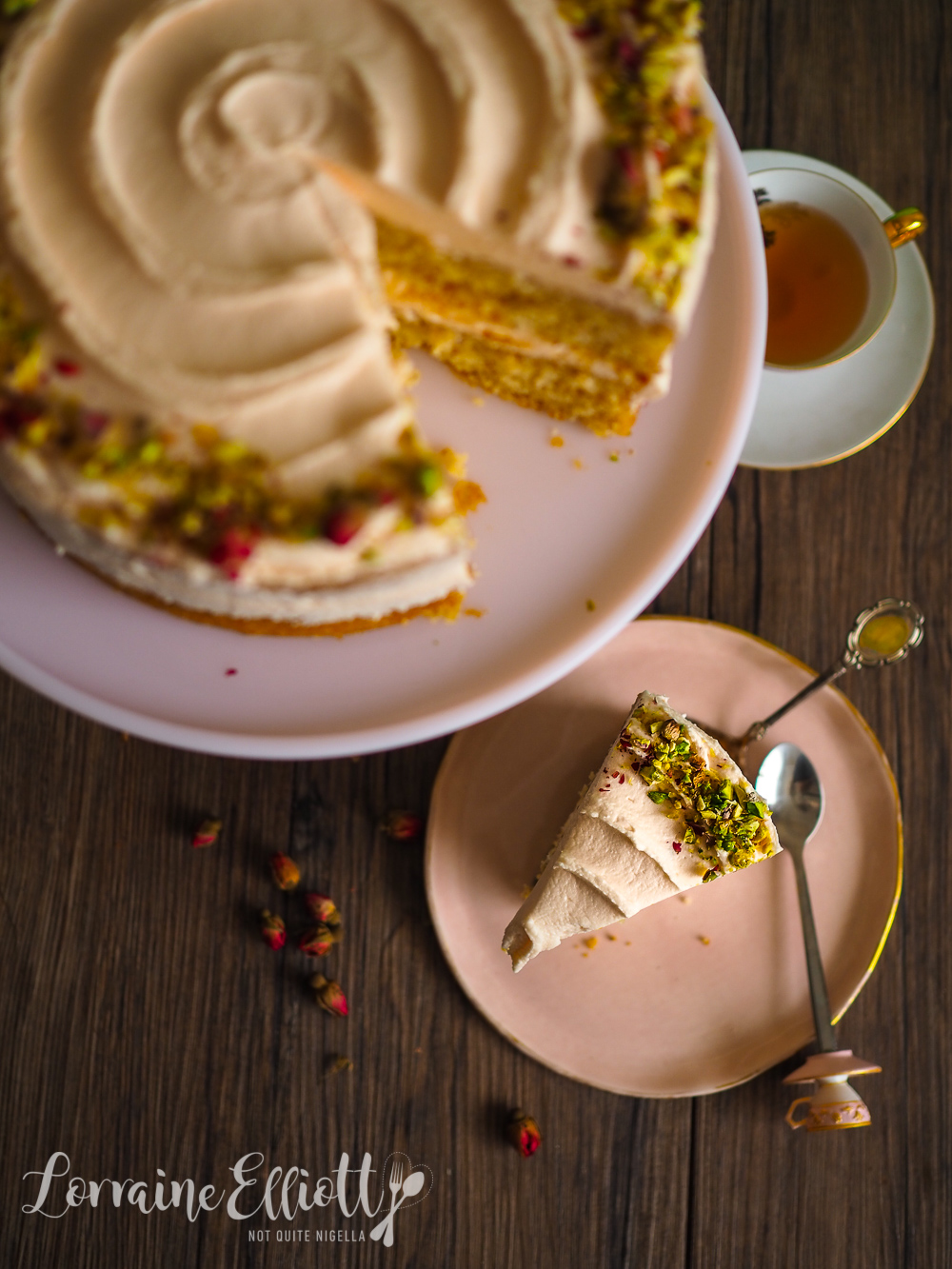 "Who?" I asked distractedly as I was cooking at the time.

"No seriously, Barack Obama follows me," he said protesting. "Look!" he said showing me his twitter page and sure enough Barack Obama was following him. I hit the escape key wondering if it was a photoshop job that he had whipped up but no apparently Mr NQN is followed by one of the most famous and amazing people in the world. 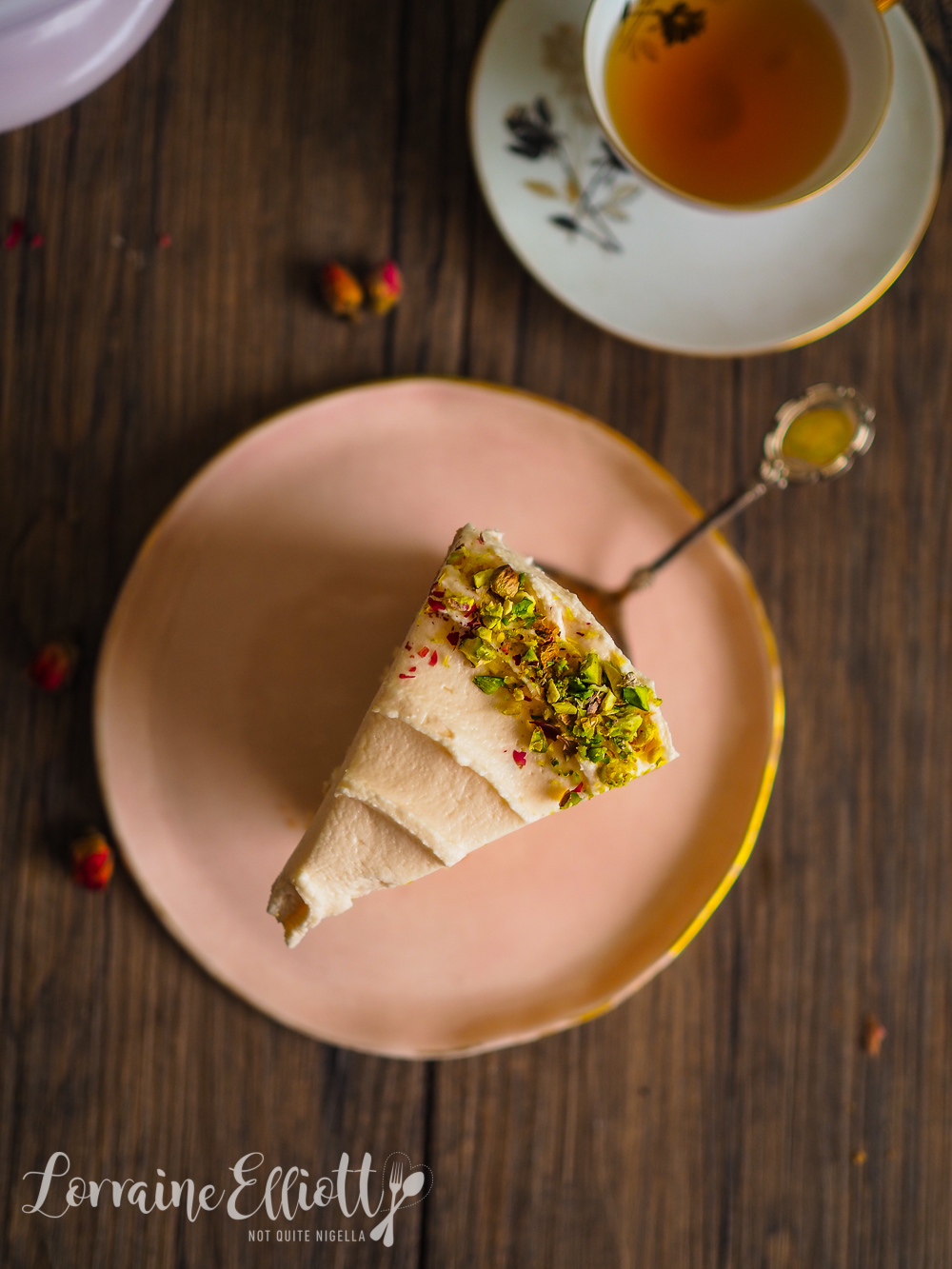 "He has been following me for a while. I dunno why, all I do is give useless pollies s%^ on twitter," he said. I looked at my husband in a new light. Because not only did he beat me at twitter, but he kept it quiet for so long!

So tell me Dear Reader, do you have a famous follower? And are you doing anything for Valentines Day? 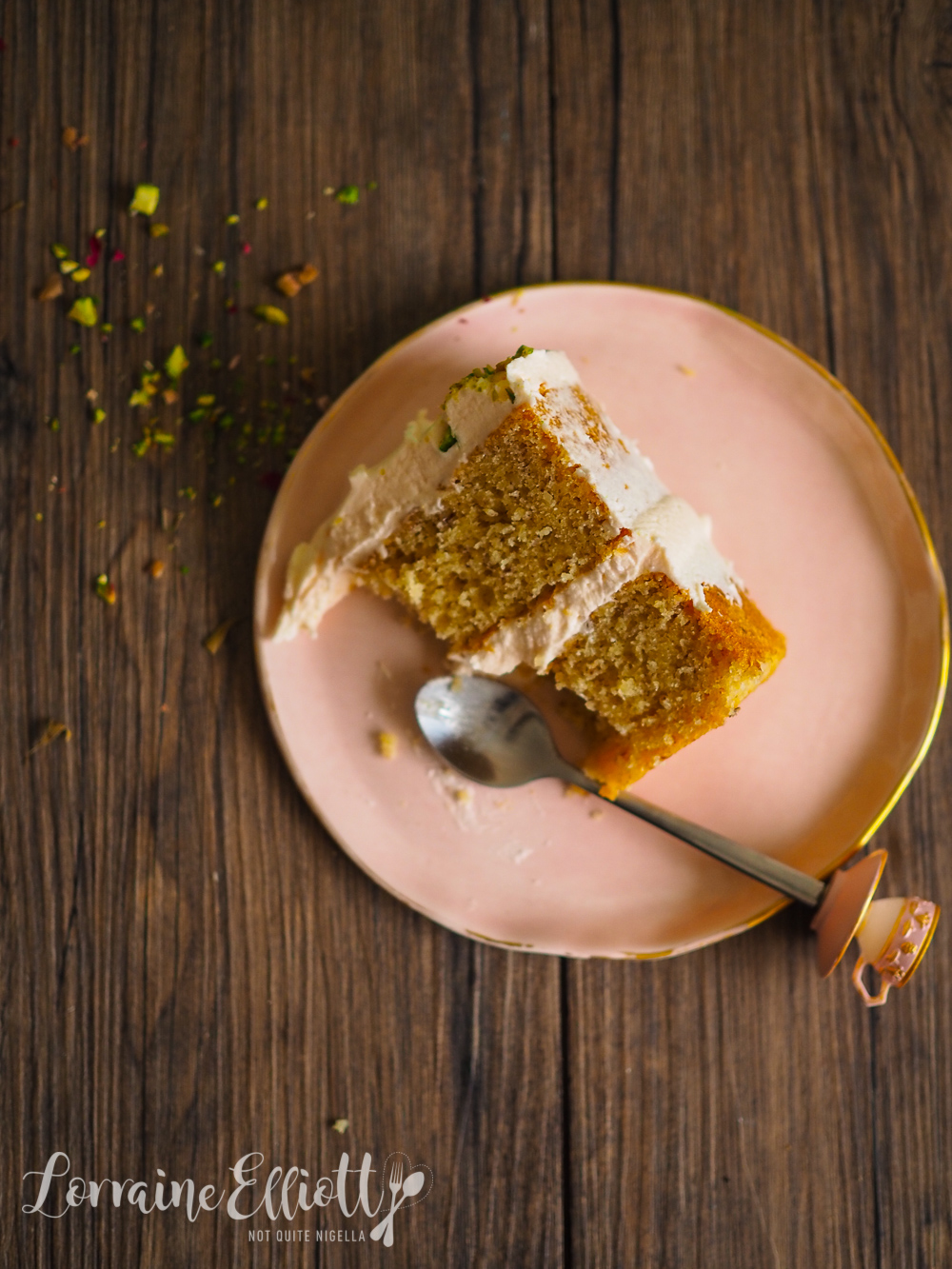 Note: rosewater isn't as strong as rose extract or flavouring so if you only have rose extract, use less than a teaspoon (or to taste).

Step 2 - Mix the almonds, flour, baking powder, sugar and cardamom in the bowl of a mixer fitted with a beater attachment. Add the butter in cubes and beat on medium speed until fluffy. Add in the yogurt and eggs and beat until combined. 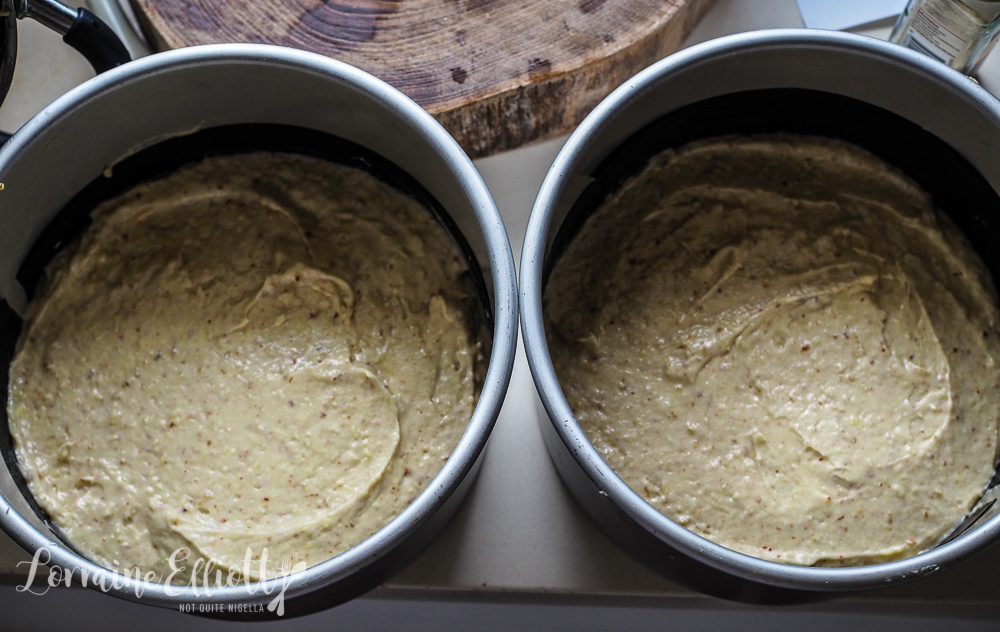 Step 3 - Scoop into the two tins dividing the mixture as evenly as possible. Bake for 50-55 minutes or until the centre springs back when pressed. Cool completely.

Step 4 - While the cake is baking make the rose syrup by combining the sugar, water and rosewater and simmering until you get a thicker, syrupy consistency. Cool completely. 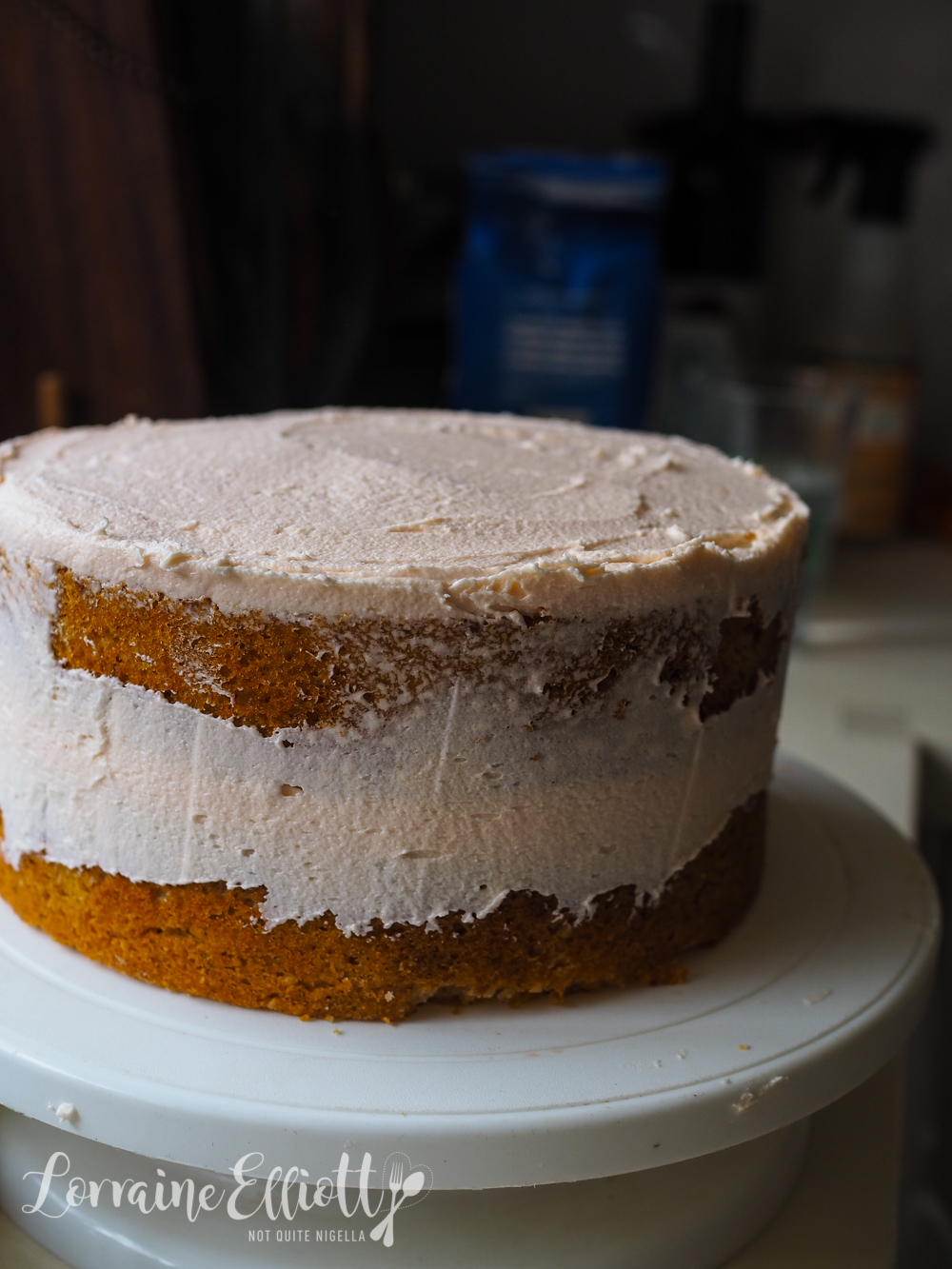 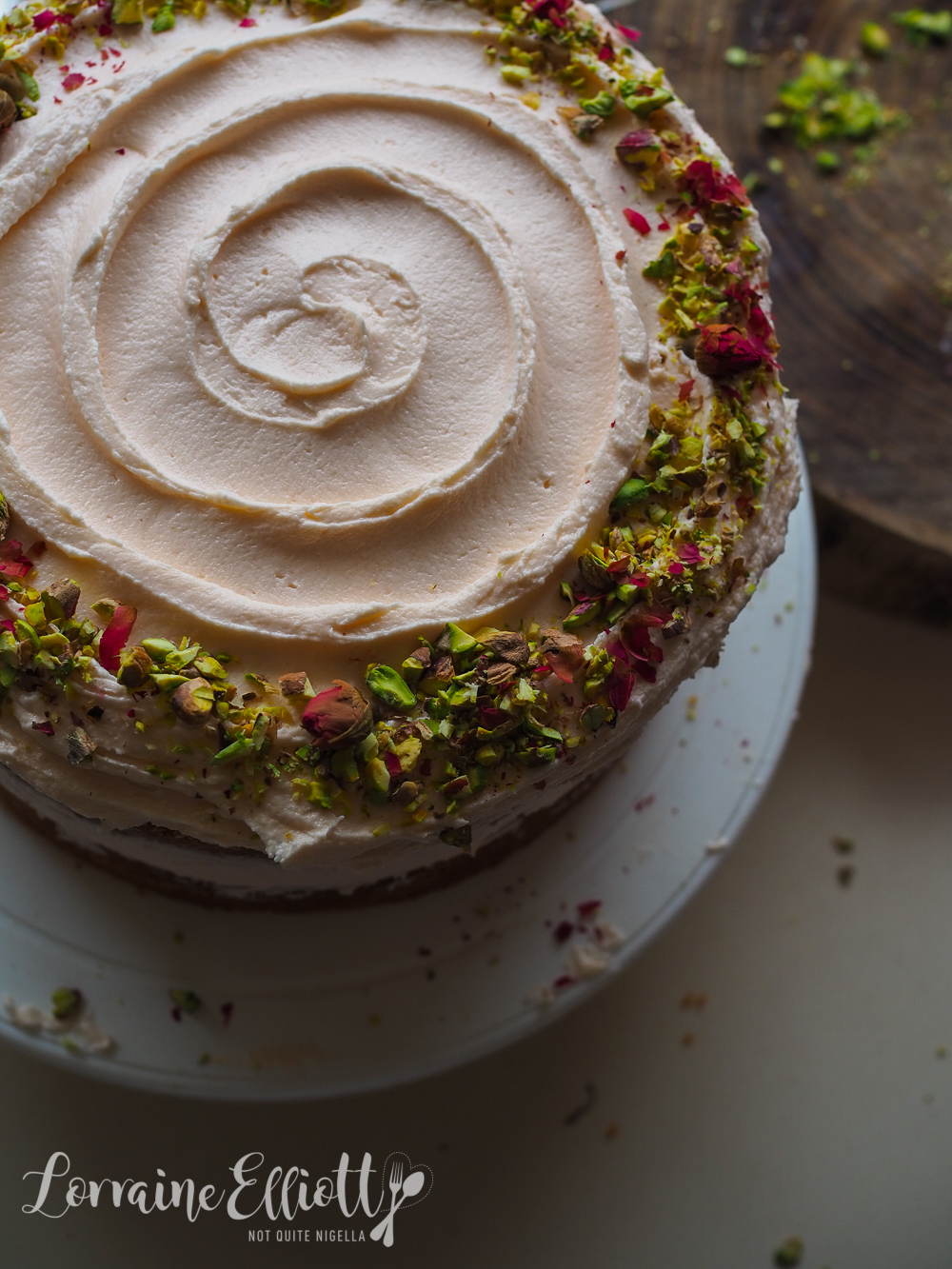 Step 6 - Take an angled palette knife and with your dominant hand press down gently on the top of the cake to form a spiral pattern and turn the cake turntable with the other hand. This can take a bit of practice and you can simply smooth over the buttercream and start again if you don't get it the first go. Sprinkle the outside with pistachios and rose petals. 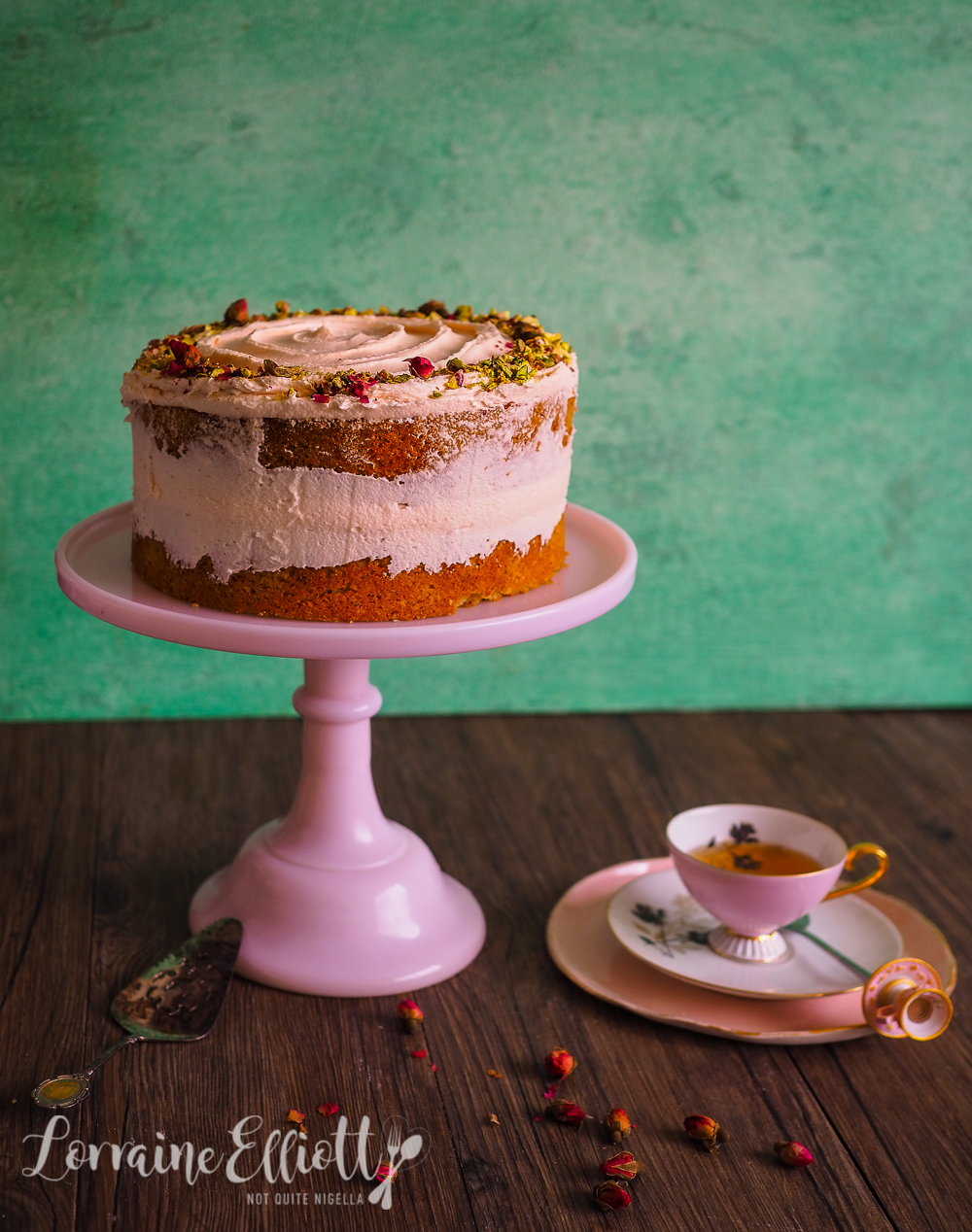 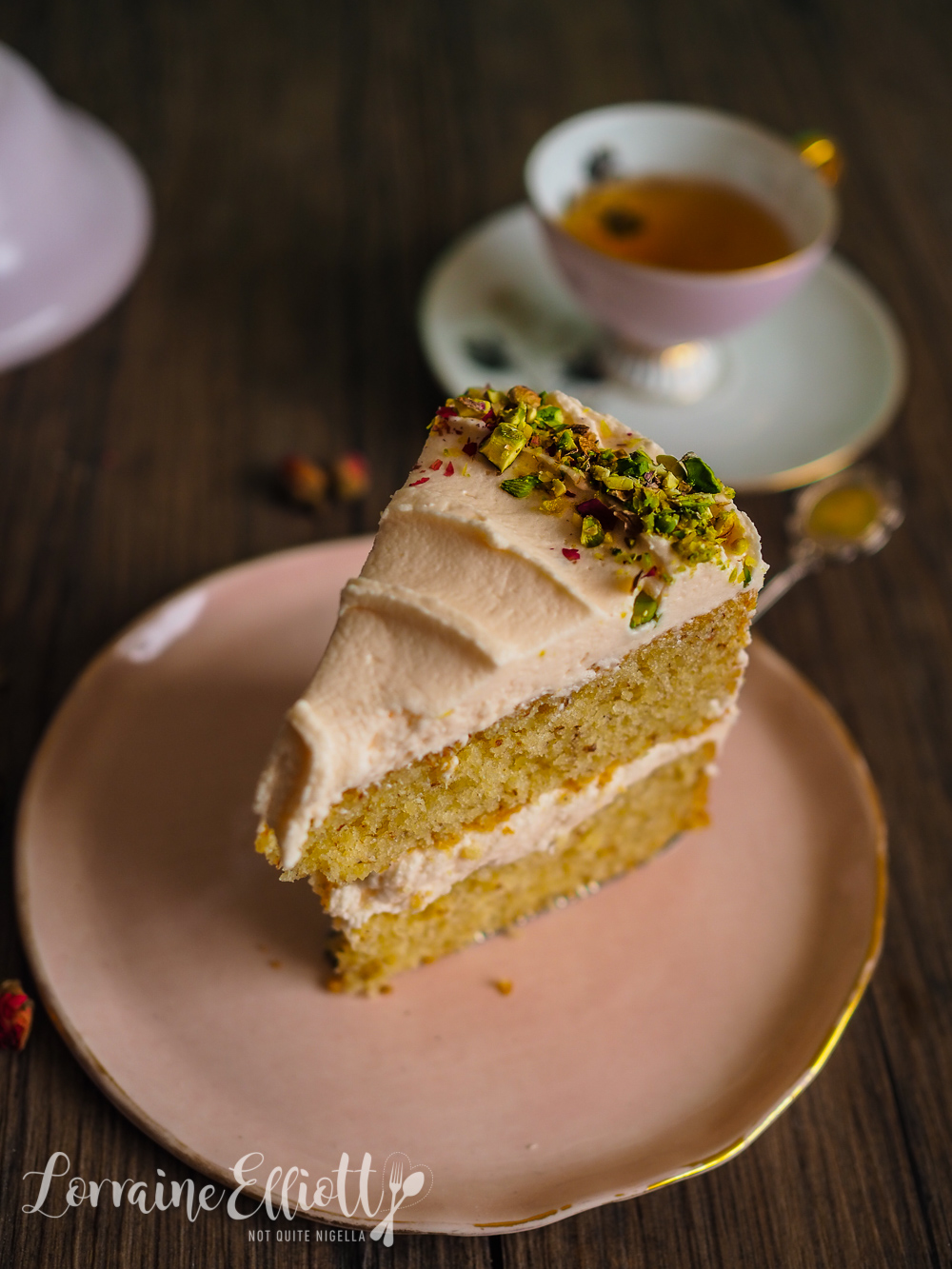