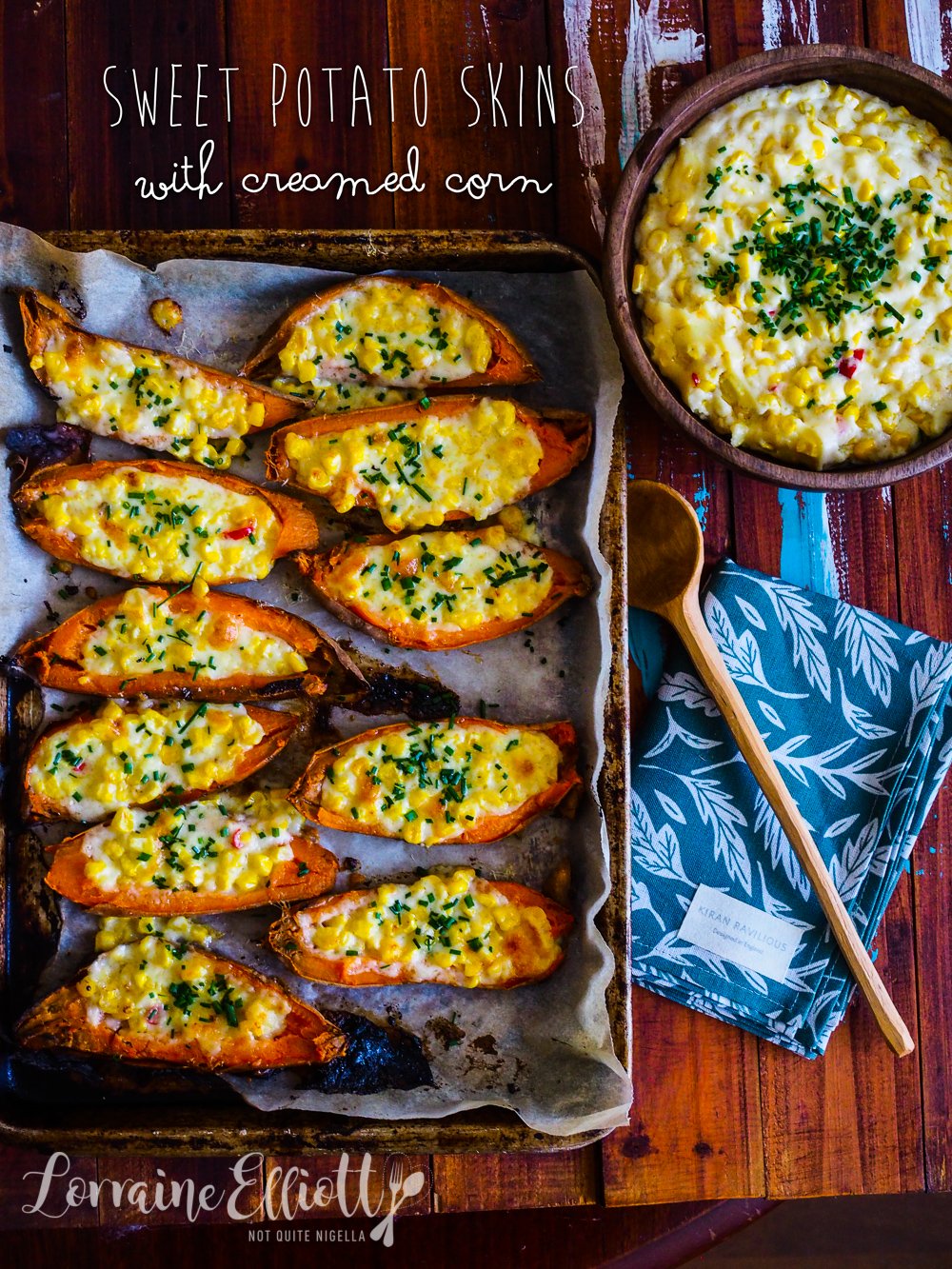 Dear Reader, please don't let the idea of creamed corn put you off. Home made creamed corn is amazing stuff and bears little to no resemblance to tinned creamed corn. In fact I'm going to suggest that if you like corn, you have to give this recipe a go at least once (I'm being bossy here!). Best of all it's a cinch to make and if you want to make a tasty vegetarian meal, you can stuff sweet potato skins with it and then bake until golden!

Nina's oven died a couple of months ago and she has resorted to not too subtly hinting to me that she would like me to furnish her with food. I have offered to cook her food in exchange for Personal Training but that hasn't quite come about. Every night for dinner she makes scrambled eggs and salad. She will occasionally ask me what I am cooking in the hopes that I give her some and she was rather excited when I told her that I was making creamed corn stuffed sweet potatoes. 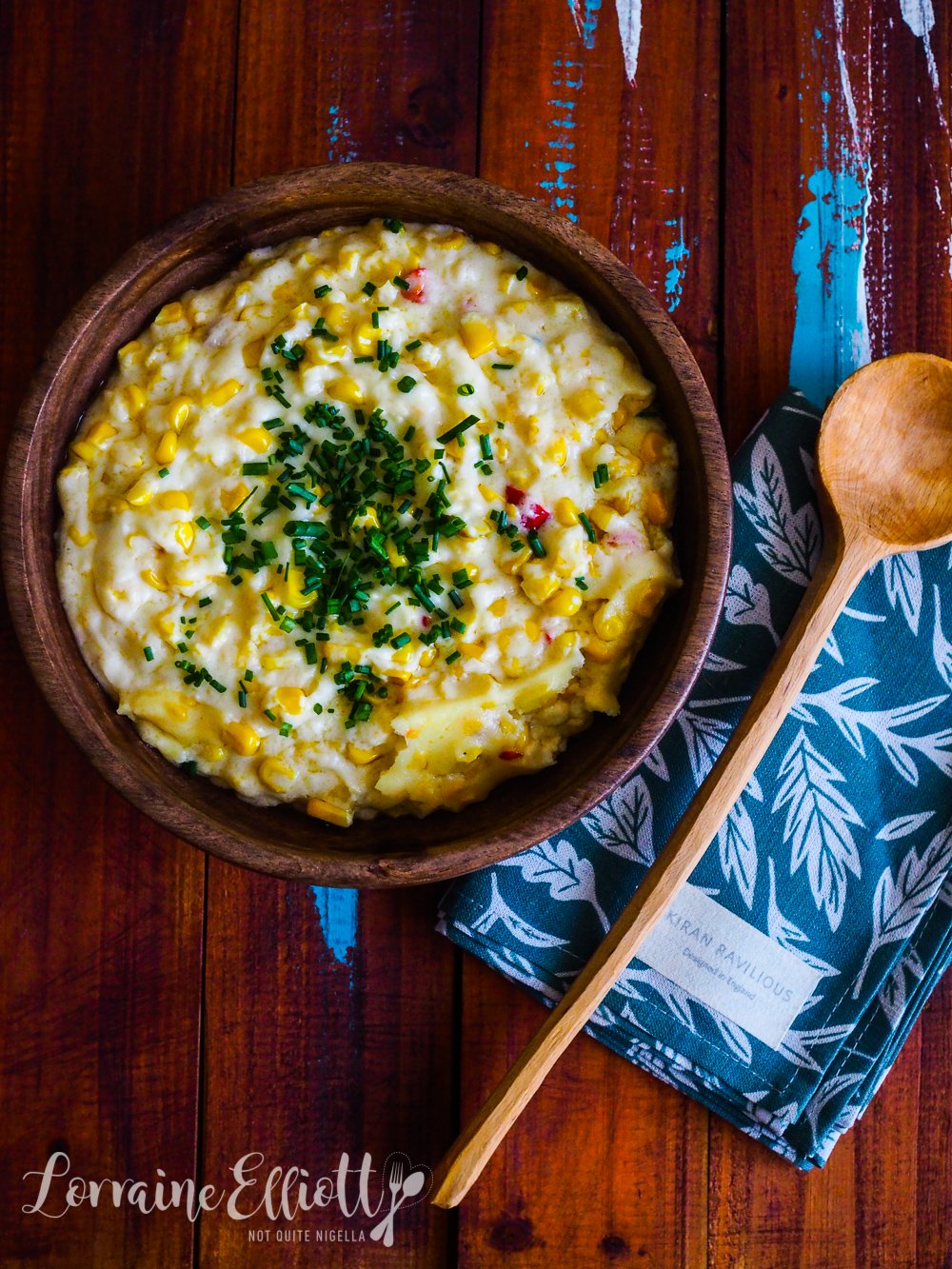 I actually managed to surprise Nina after I came back from Texas. I actually managed not to put on any weight during the 9 day avalanche of food. Part of the reason was that I had fellow writer and friend Kristie to thank for that as we motivated each other to train every morning on very little sleep.

I actually surprised myself too a little. When I got back I actually decided to keep training up and go from 2 days a week to 7 days a week. I train with Nina twice a week but the other 5 days I do the short semi cardio routine that Kristie and I did in Texas. And bizarrely I actually love it because I finally got endorphins! I'll outline the routine a little further down if anyone is interested (but don't worry I won't be in the slightest bit offended if you skip it ;) ). 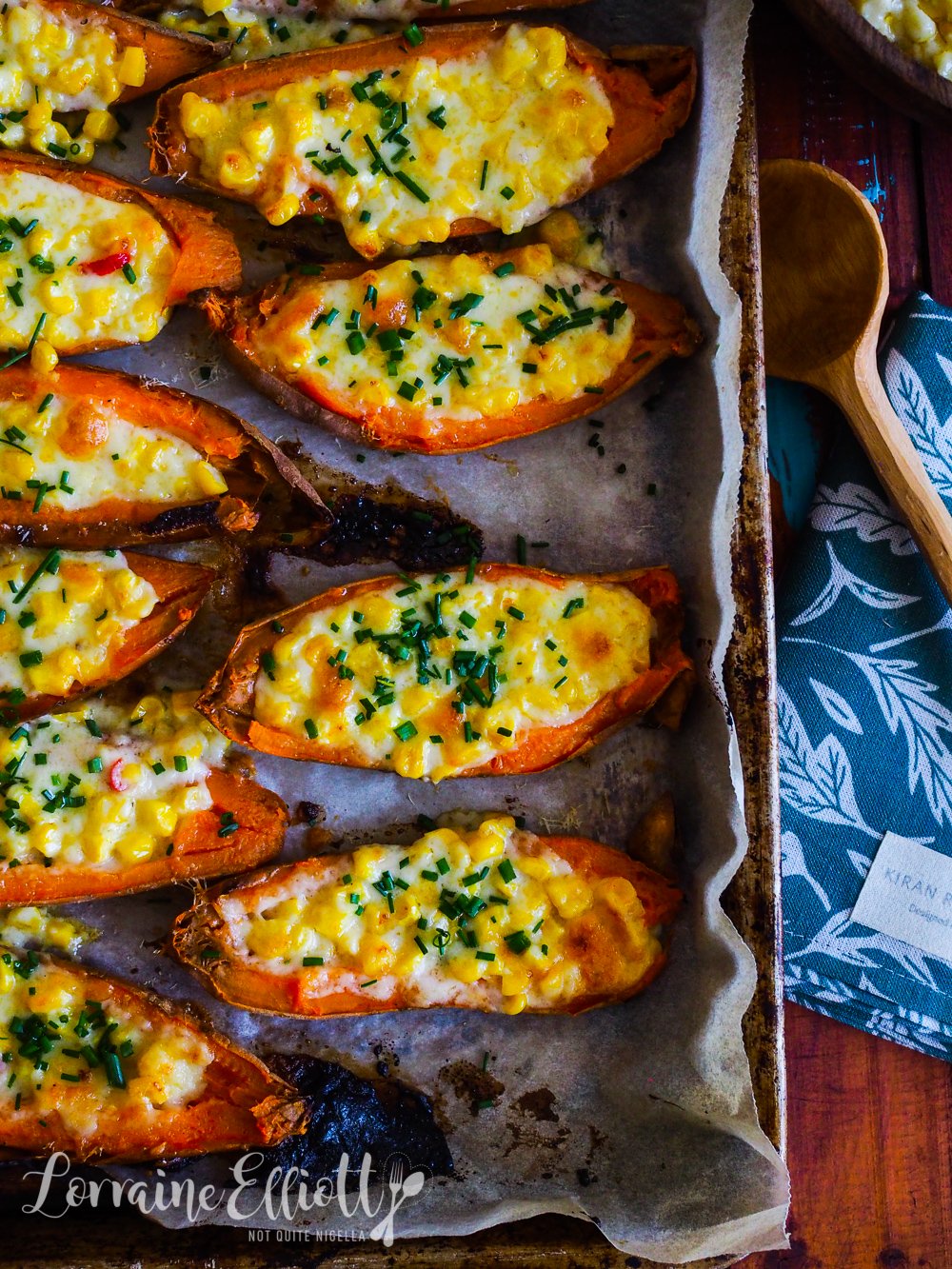 I promise that this won't turn into a fitness blog. In fact the only reason why I do it is so I can eat all the food. I had to joke to Nina that I was now "so fit" that it was awkward that the student had now surpassed the teacher in terms of fitness (an obvious joke as she is pretty much 100% muscle except for eyeballs, hair and teeth).

To prove that point, the gap between our levels of fitness was highlighted a few minutes later when she asked me to do pull ups. "I don't know who you think I am but I can't do that," I said to her completely deadpan. I mean I can do some things but lifting my whole body weight by my arms is not one of them. "I'm sure you can with your new level of fitness," she said her eyes twinkling.

And so I tried. And every time I jumped up I let out a petrified scream (it's a private gym, nobody else was alarmed I promise) and every time after that, every jump was accompanied by a screaming wail of the dying. I did a total of five of these whatever you would call them (screaming pull ups?) before Nina confirmed with a shake of her head that I would never have to do them again. Ever. I'm not sure who won that debate ;)

So tell me Dear Reader, do you do any sort of exercise? Do you get endorphins? And what is your primary motive for doing it? And have you ever tried home made creamed corn?

P.S. Here is the routine ;) The first three days I did it, I thought I was going to die. Seriously.

Just a little warning: the amount of creamed corn exceeds what you'll need to stuff these sweet potatoes but I figure there's no point in making a small amount as it is so delicious (pinky swear!). 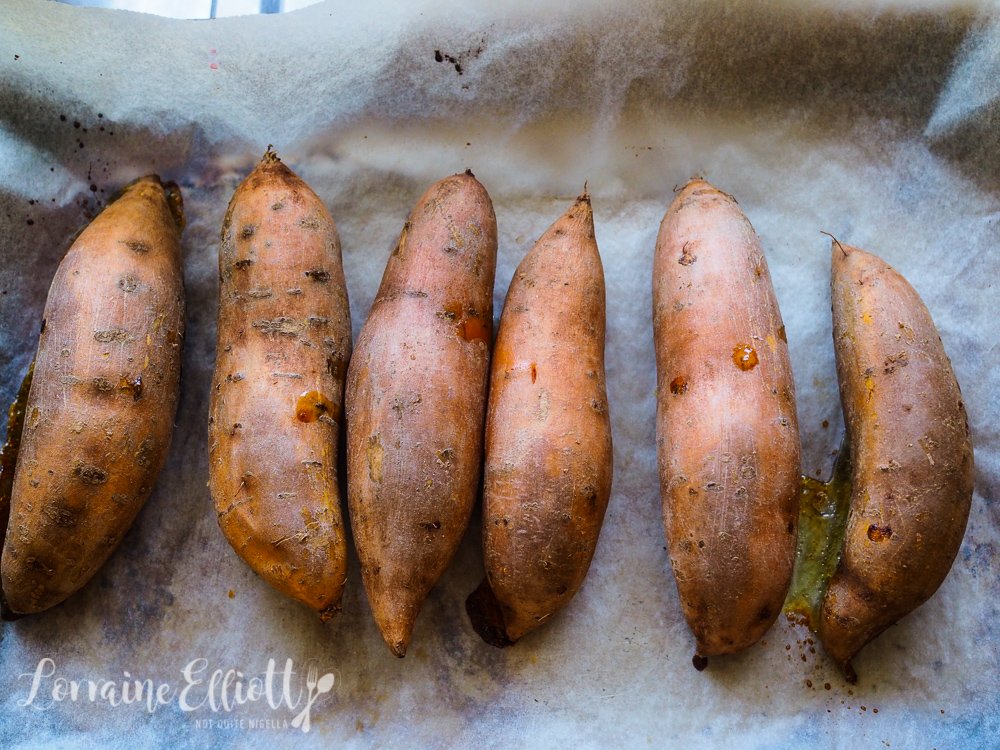 Step 1 - Preheat oven to 200C/400F. Wash the sweet potatoes well - I use a vegetable scrubber for this. Prick a couple of holes in each with the tip of a knife. Bake for 40-60 minutes depending on the size (you may need even more time if they are enormous). 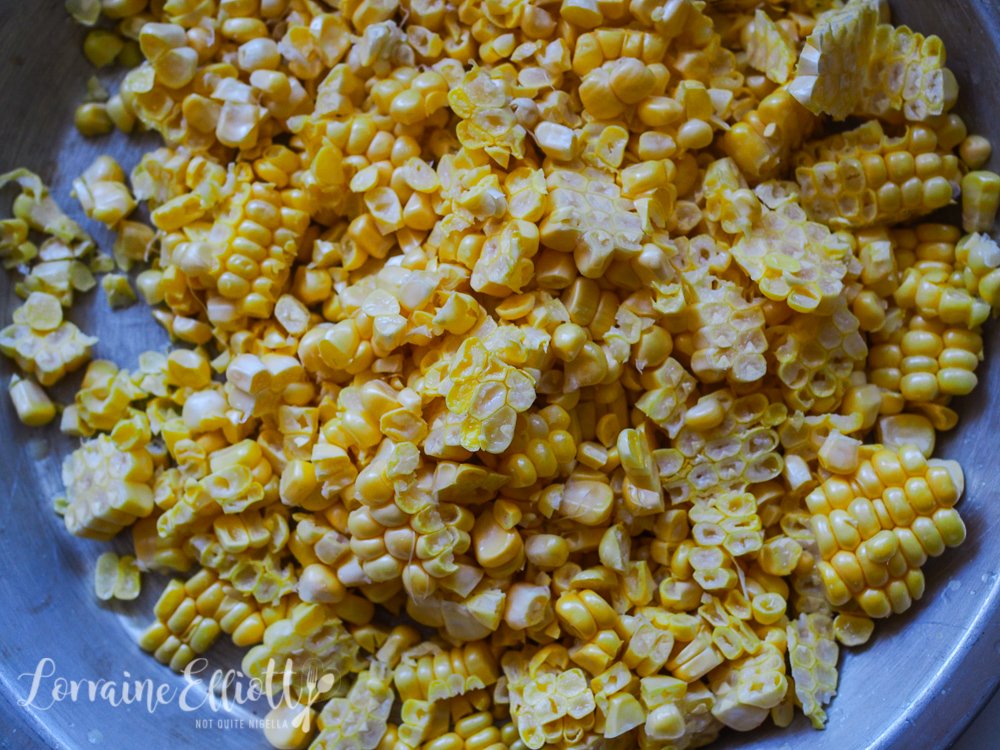 Step 3 - Melt the butter in a saucepan on medium heat and then stir in the flour allowing it to cook for 1 minute while stirring. Add in the milk half a cup at a time and switch to a whisk making sure to dissolve any lumps. Add in the cream and then the corn kernels and allow to cook them for a few minutes (3-4 minutes). Add in the cheeses and the chillies. Season with salt and pepper to taste. 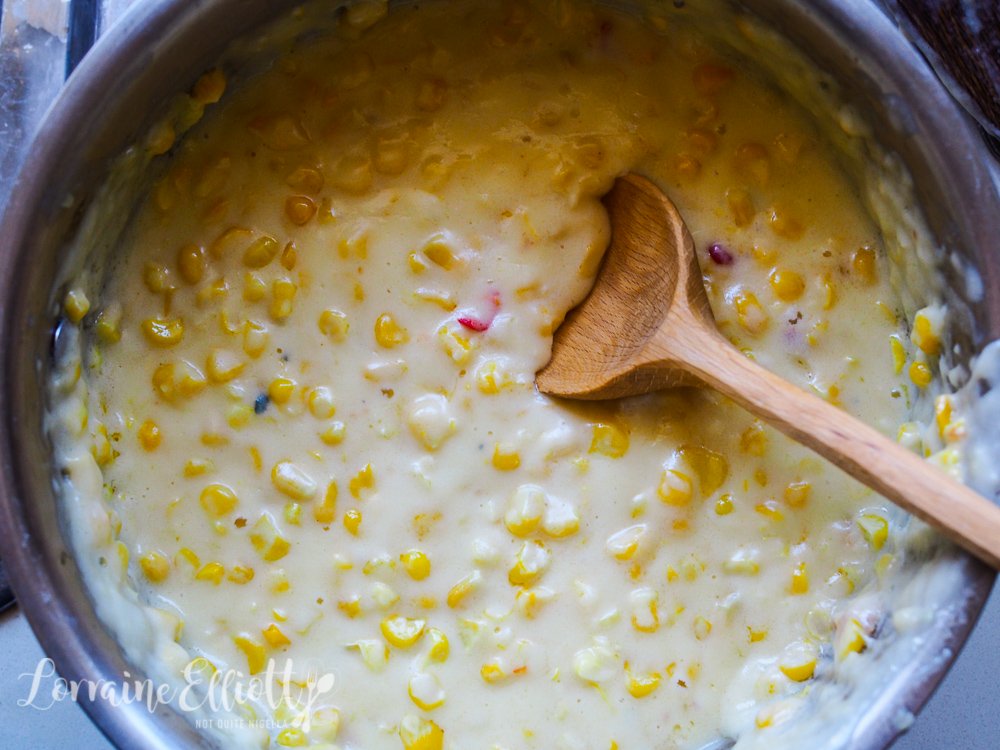 Step 4 - Split the sweet potatoes in half and scoop out most of the insides leaving some flesh still intact. Spoon in the creamed corn and sprinkle with extra cheese. Grill the cheese until golden and then top with chives. 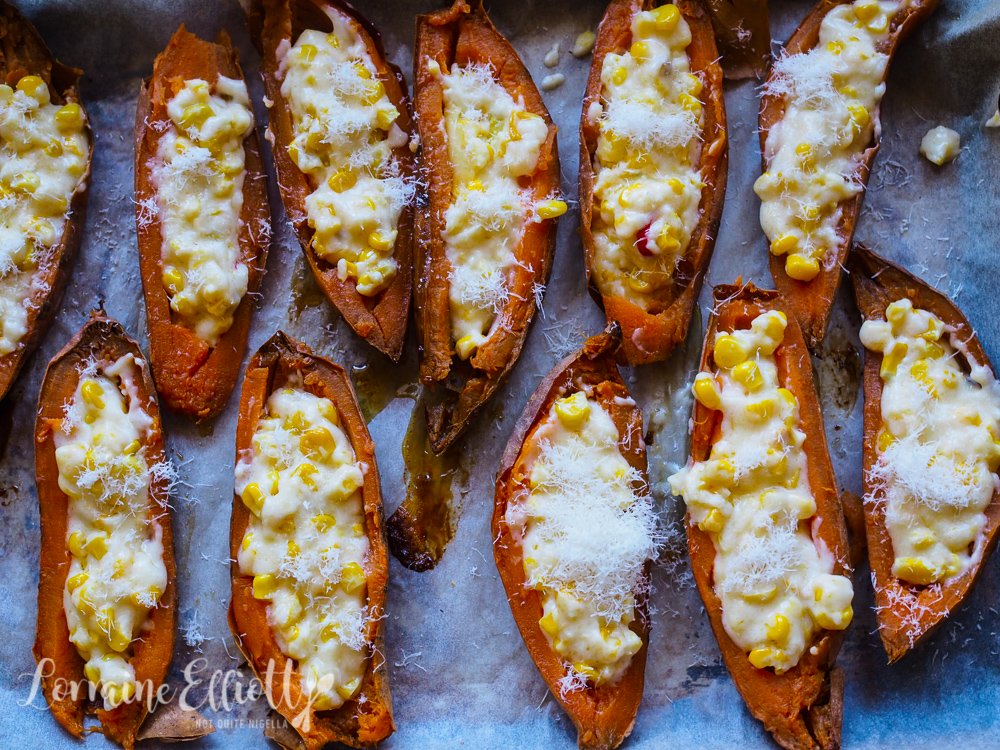