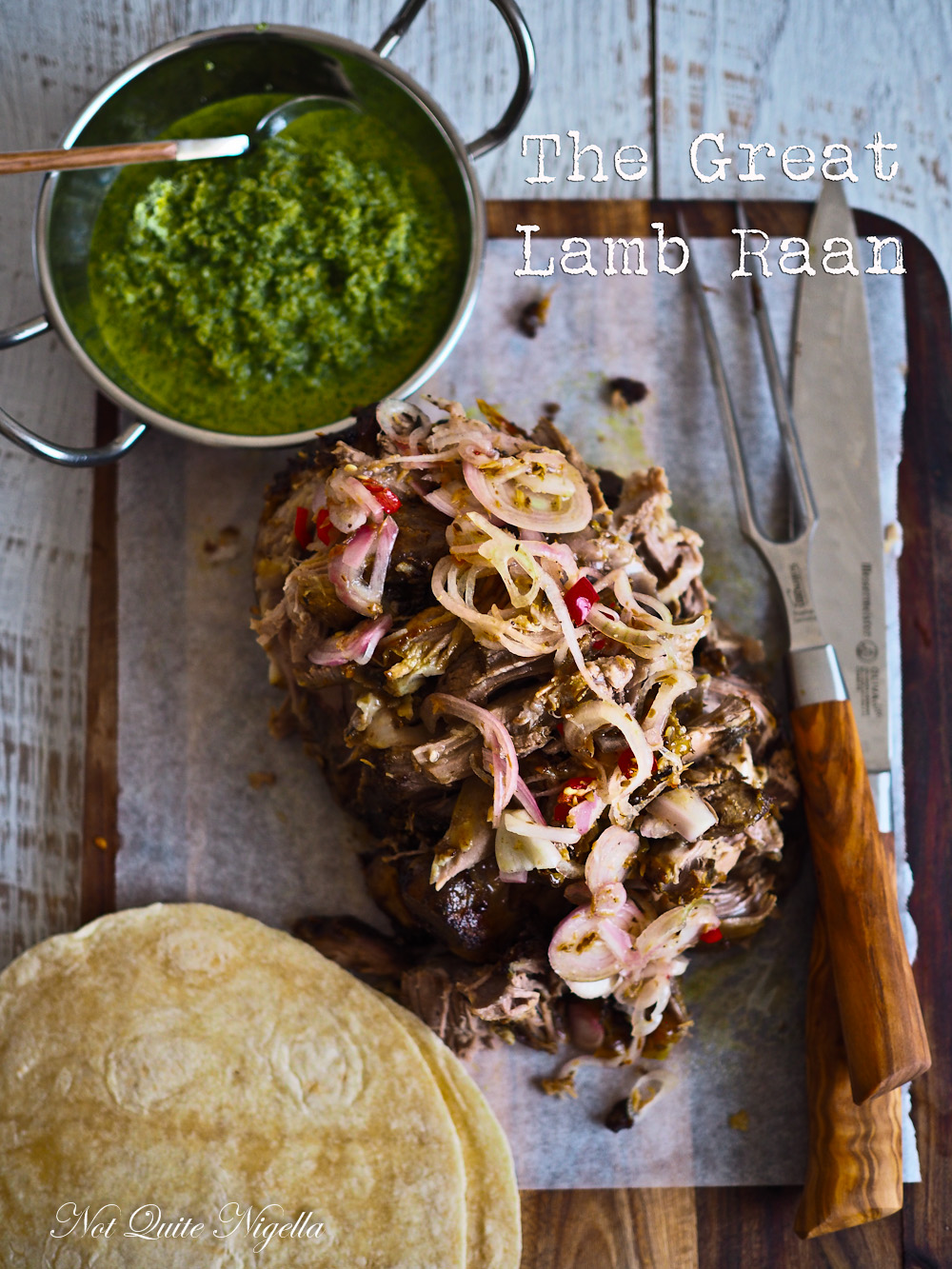 *Through clever marketing, lamb seems to be firmly ingrained in the collective conscience of Australians as the Australia Day go-to meat. It's not a meat I grew up eating a lot but it's one I've grown to appreciate. A couple of months ago we visited a modern Indian/Sri Lankan restaurant called Indu where we had one of the best lamb roasts I've ever had. The meat was beautifully spiced and buttery soft and it lifted off the bone easily. And chef Bimal Kumar was kind enough to give me the recipe for their Great Lamb Raan Roast! *

Lamb raan has a very long history in India, a country usually known for their vegetarian cuisine. It dates back to Alexander the Great who dethroned King Paurava. It is said he became friends with the former king and was served this lamb raan dish at a banquet. Over the years the Kashmiris preferred to make it with lamb while the Punjabis preferred goat. Raan is Punjabi for "leg" and the hind legs were usually used-this treatment making the usually tough meat tender.

Marryam H. Reshii the cookbook writer, restaurant critic and gastronomic writer based in Delhi says, "It is a bucolic dish, capable of being reproduced in the wild by horsemen, when the forerunners of the Mughal Mogul emperors used to cook it while in battle. Raan is eaten with naan bread and a coarsely chopped salad (onions, tomatoes, cilantro) or yoghurt. Never curries or any fancy knife and fork food. Do use your fingers to tear the meat in commemoration of the 14th century horsemen on the Steppes of Central Asia." 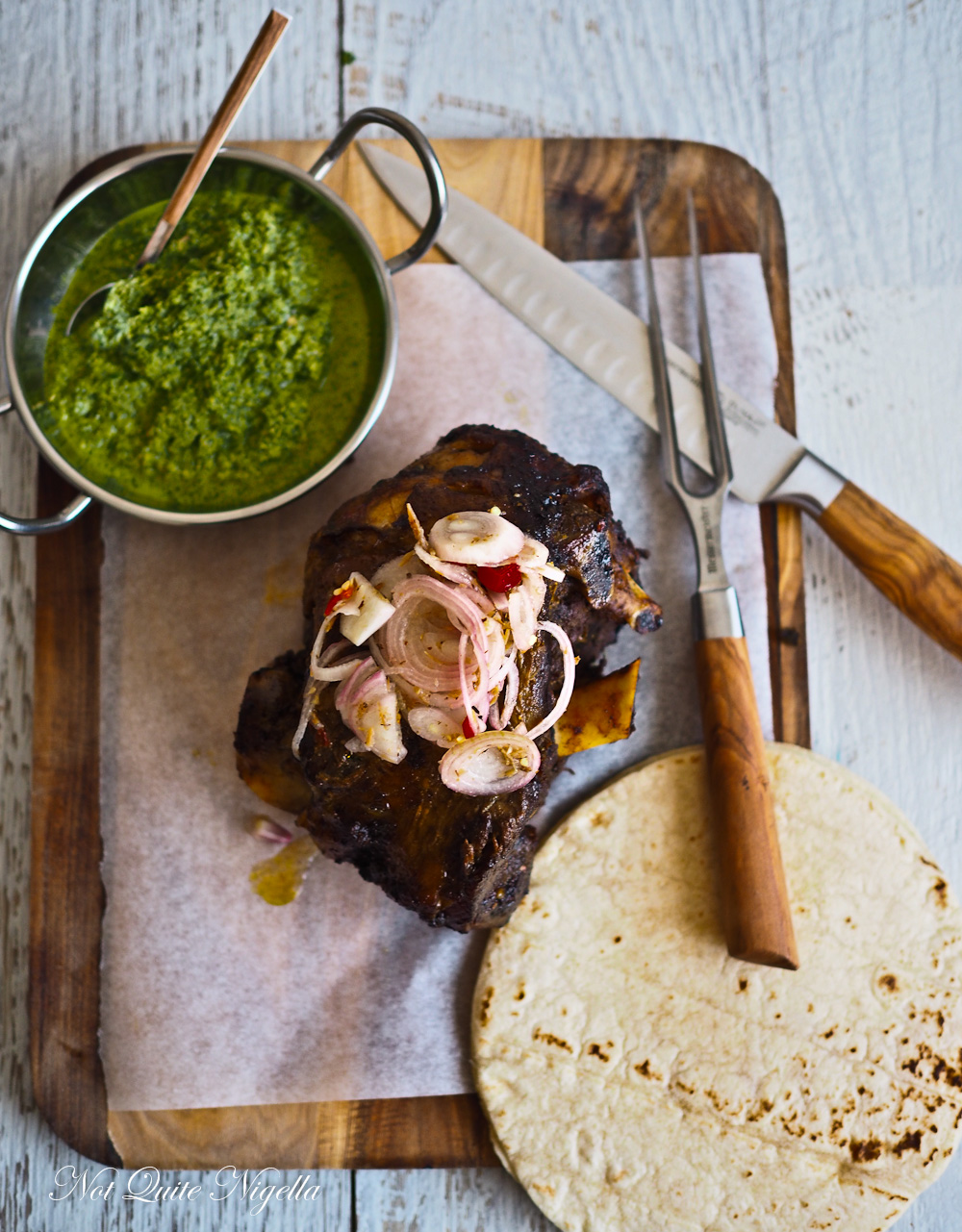 The leg of lamb is smothered in aromatic spices and then cooked in liquid so that it is beautifully tender and fallapart soft. The lunu miris, a mix of onions and chilli and the mint chutney further lift the rich meat. If ever a case was made for a modern Australian lamb with mint sauce, this would be it.

I know a lot of people talk about the distinct flavour or lamb-it's a love or hate sort of thing. If anything the heady range of spices cloaks this somewhat and lifts it beautifully and you no longer get that pervading richness that lamb can have. The lamb is served either intact or with the meat shredded for easy eating. Most of the ingredients are easily found at the butcher or in your spice cupboard and the only thing that seemed unusual was the green papaya and the Maldive fish which I bought from an Indian supermarket. I now am the proud owner of 200 grams of Maldive fish when I only need 5 grams! ;)

Usually chef recipes need a bit of fiddling. Chefs are used to writing recipes for larger quantities and things can get lost in the minimising process. By the time you've picked up the recipe in the cookbook you can pretty much bet that a proof reader and recipe tester has gone through it several times.

I was of course too optimistic when making it. While it was cooking I found that the flavour was superb but it wasn't as soft as I wanted it to be. So I asked the restaurant and it turns out that there was a little omission from the recipe. That is, the lamb leg is entirely submerged in stock-some recipes simply roast it with a little water but this recipe called for the full submersion. So in it went covered with stock. Another recipe ambiguity was the addition of green papaya skin. I bought some, peeled and chopped up the skin only to try some and decide that it was terribly bitter. Then on further questioning found out that it is a powder that is used, not the fresh skin itself. 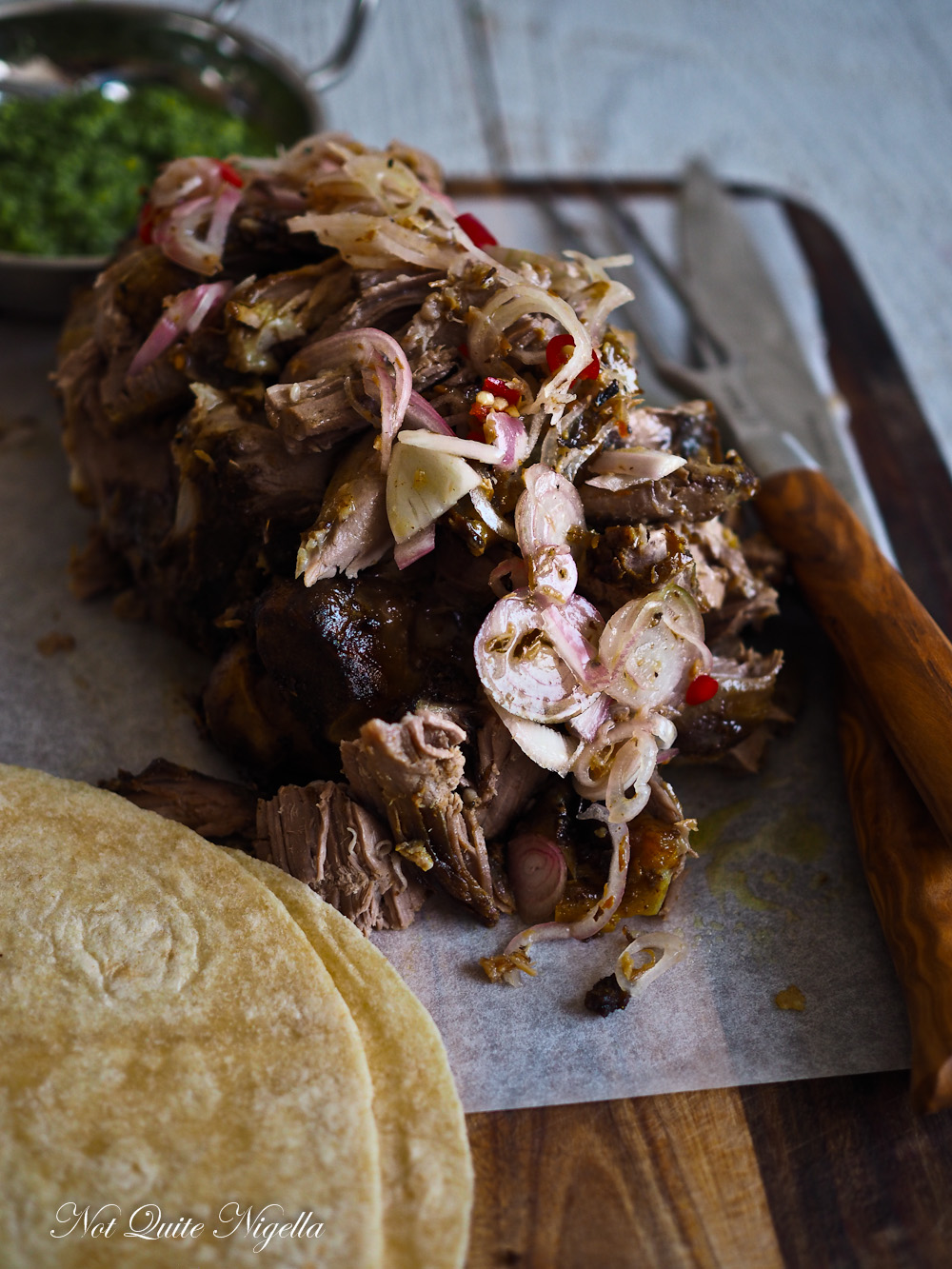 But I'm being silly and truth be told I've been handed recipes much, much more vague than this. This lamb raan is a stunning dish. Boldly flavoured, tender and aromatic it will make a lamb lover out of practically anyone that enjoys a roast meat dinner. The best part of this if you are thinking of making this beauty for Australia Day is that it can be done ahead of time and benefits from the intensifying of flavours. It can be easily heated up on the day.

So tell me Dear Reader, do you have any other recipe ideas for the Maldive fish? What success rate do you usually have with recipes? Do you find that you have to interpret things? What will you be eating on Australia Day?

Adapted from a recipe by Bimal Kumar

This recipe needs to be started 3 days ahead of time 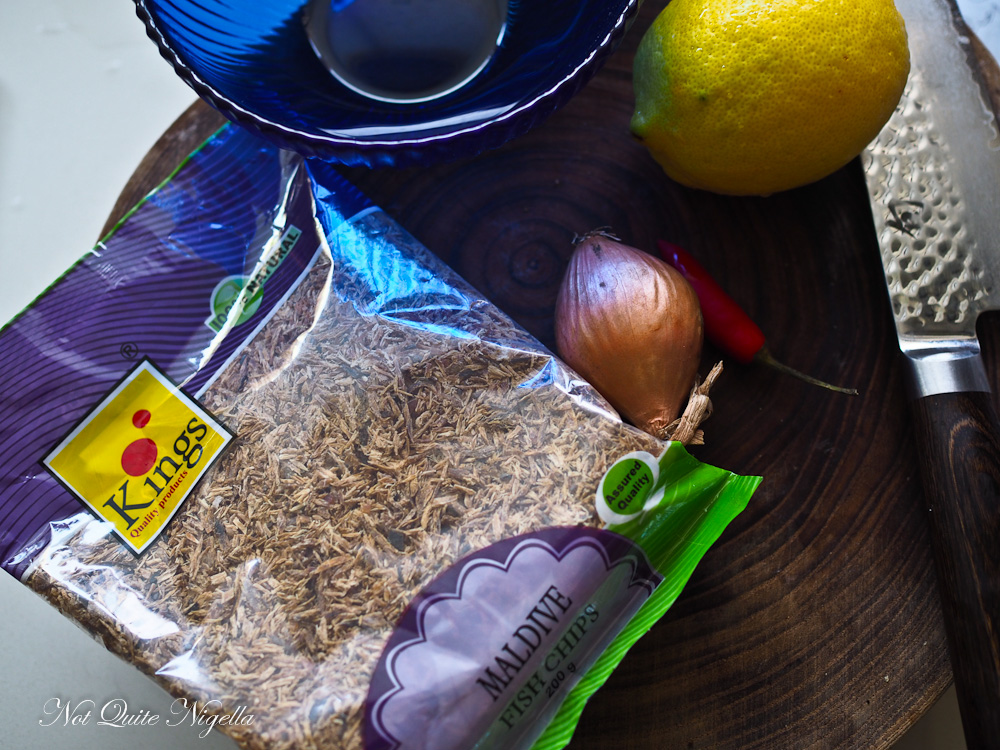 *Maldive Fish Flakes can be found at Indian grocery stores. They're a dried salted fish so if you have a similar item already at home (even fish sauce could work) try that if you can't get it. I only say this because you only need 5 grams and the packet I got was relatively large at 200g and now I don't really have anything to do with the rest of it.

Step 2 - Preheat oven to 160°C/320°F. Layer onions, tomatoes and green chillies on the base of a cast iron pot that fits the lamb snugly. Place leg of lamb on top and pour over the stock full submerging the lamb adding more every hour or so so that the roast keeps moist. Cover with foil and roast for a total of 4.5 hours knocking off 10°C in the temperature every hour.

Step 3 - To make ahead of time, you can cook this and store it in the fridge in the cooking liquid. To reheat, place the lamb on a tray with 2 cups of the liquid and roast at 100°C/212°F for 30 minutes or until cooked through and then baste with pan sauce and then place under the grill for a minute. 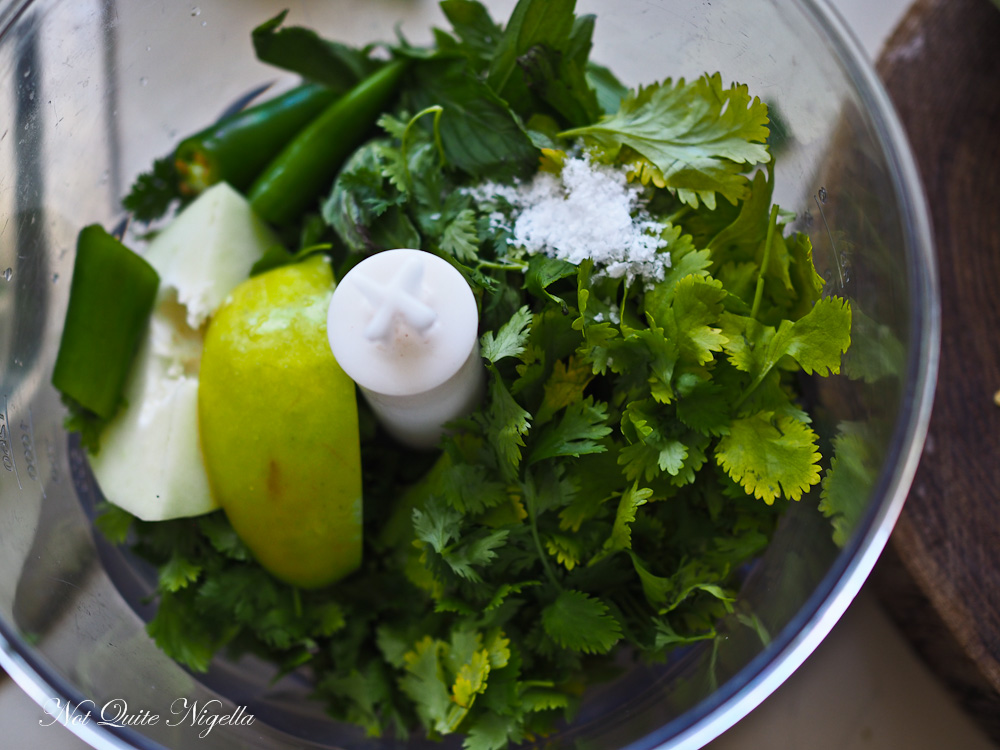