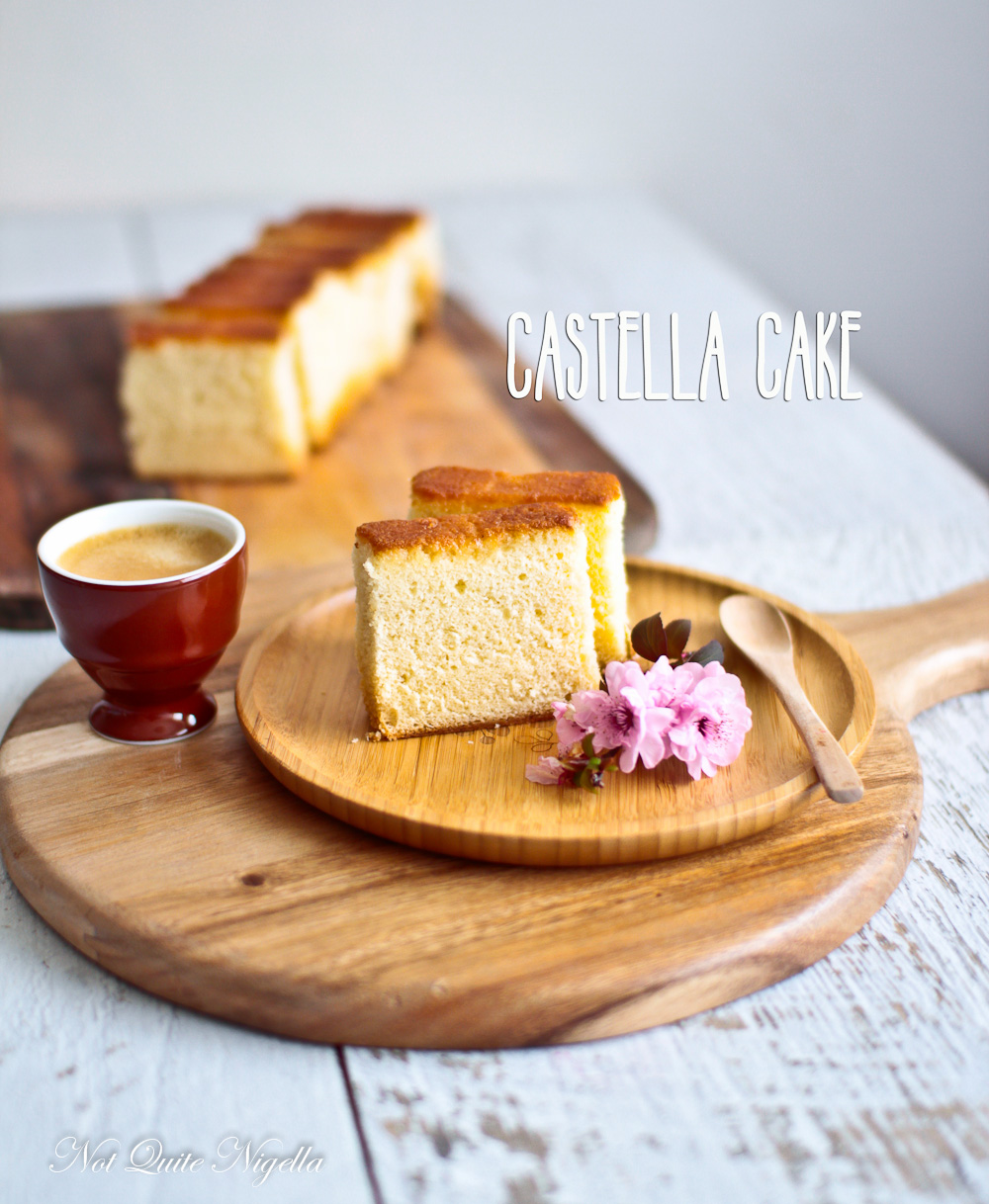 Want a bit of a baking challenge? The Castella or Kasutera Cake is a very popular Japanese sponge cake that has a wonderfully soft and delicate texture. It is actually a cake that improves with age - eating Castella cake 2 or 3 days after you bake it and it really comes into its own. She needed a great name-Sophia it was.

Traditionally castella cakes are baked in a wooden hako (hako means box) and are a specialty of Nagasaki. Japanese cakes aren't usually overly sweet (except for wagashi) but this is a sweet cake flavoured with honey. It is said that Portuguese traders brought over the Pão-de-ló (Portuguese sponge cake) and it was taken on by the only port open to trading in Nagasaki. It became essentially a rather Western sponge cake. It is a beautiful cake in its simplicity and only calls on just four ingredients: eggs, sugar, bread flour and honey. 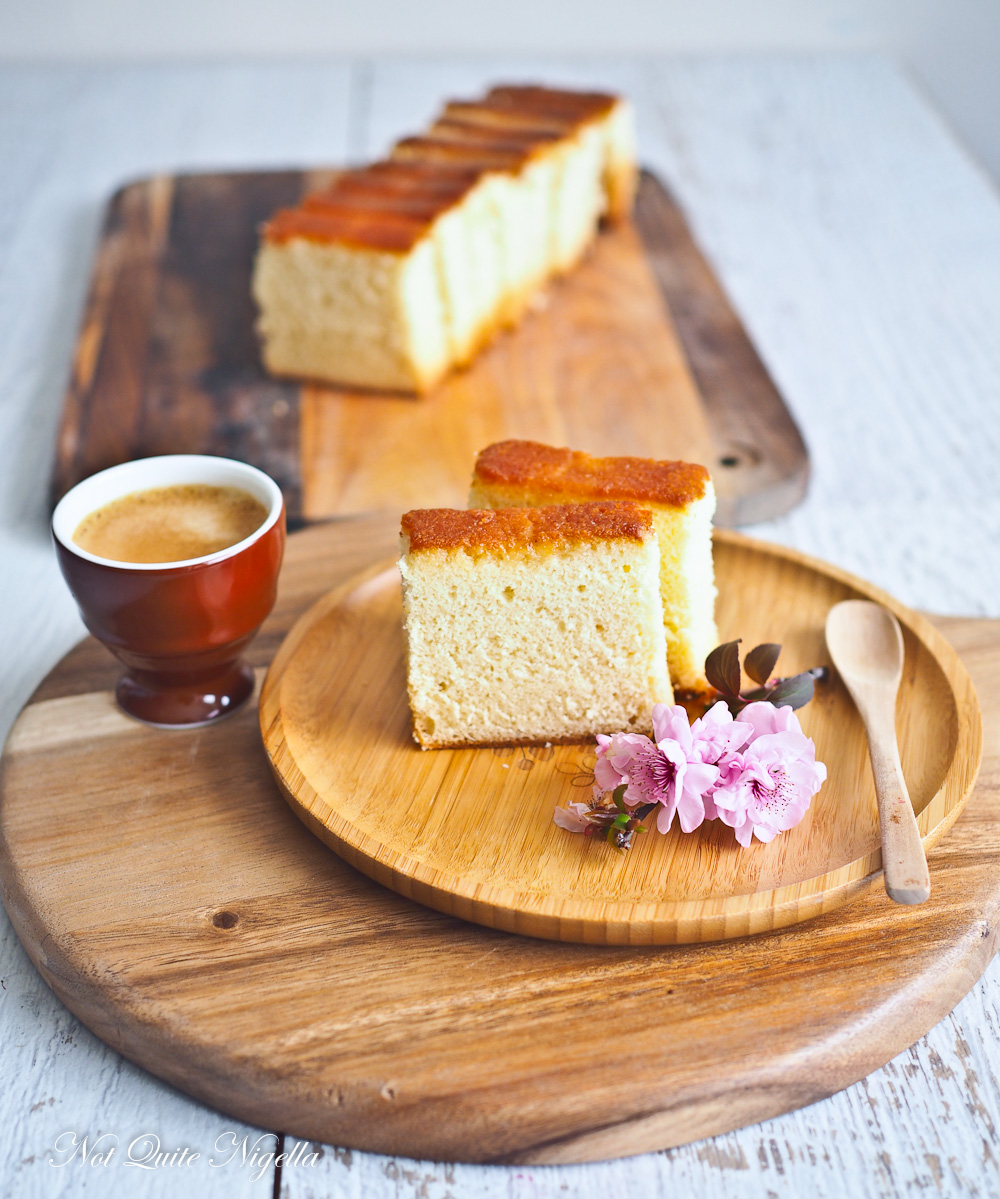 It is also one in which I used over a dozen eggs to arrive at this recipe. I didn't realise how hard it would be but finally, after several attempts I had a Castella cake that I loved and tasted like the ones I had eaten in Japan. It only took a couple of months!

I don't know if you remember but I mentioned Nina dog sitting five dogs. She has now decided to open up her own dog minding business. And well the castella cake was not the only hotly anticipated thing in our house. I was also looking forward to meeting her dogs. This was before we had Mochi so I was very excited. 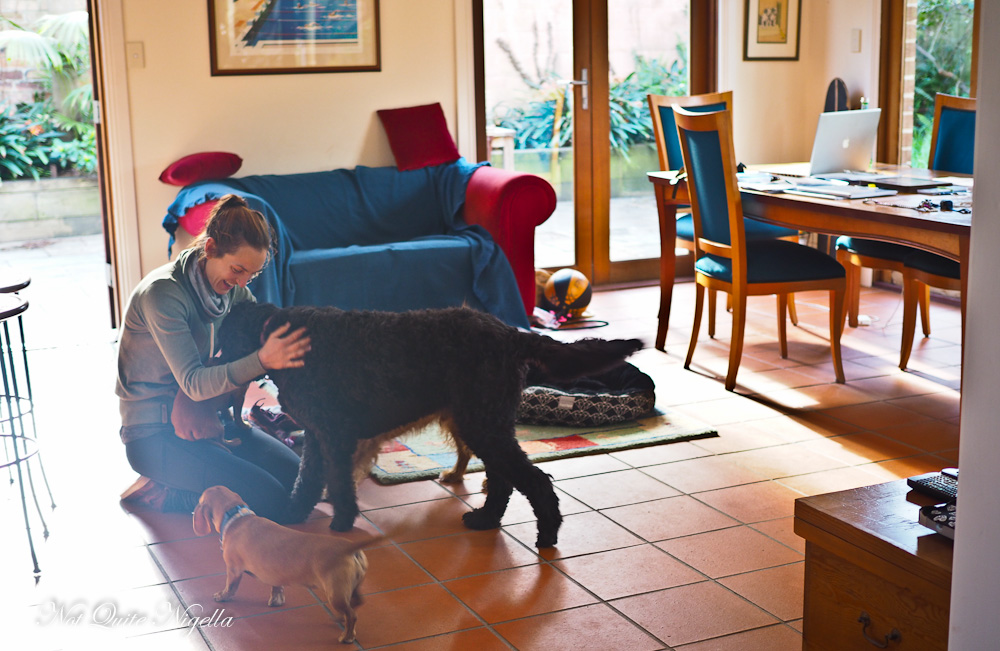 She asked me over for afternoon tea and to play with the dogs one Thursday afternoon. I had to text her when I was there because she was effectively the pied piper and all five dogs would shadow her, like she was their mother and she didn't want to lose any of them out the front door. She cracked open the door, "I think some of them snuck through!" and sure enough Cinnamon and Spice the sausage dogs had already managed to get into the lounge room. 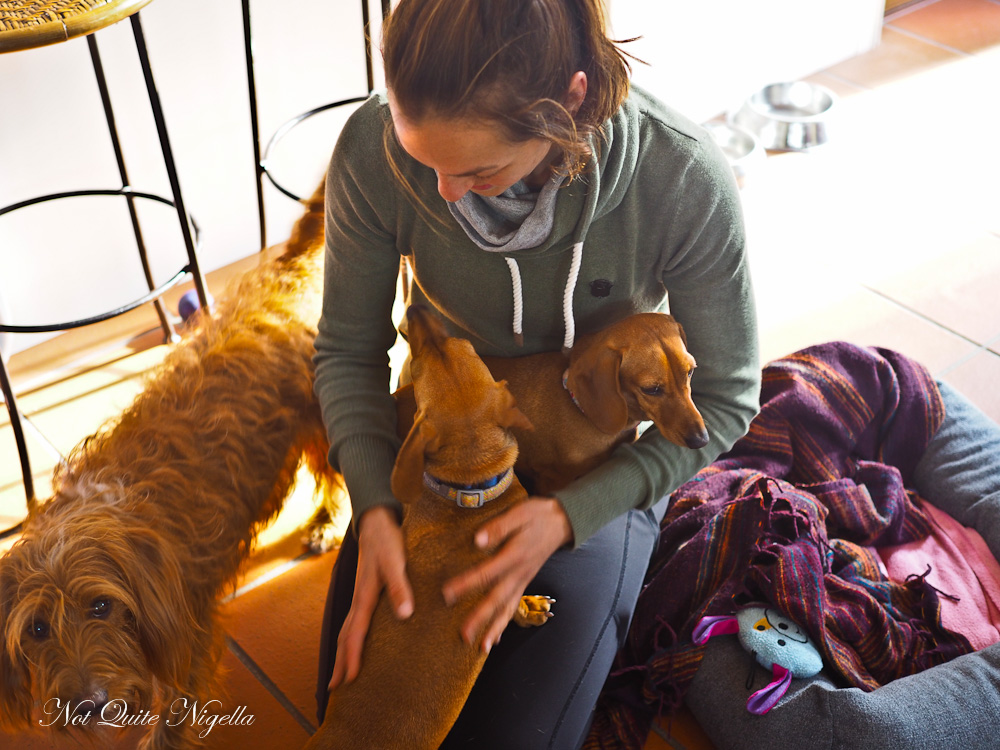 Then all of the dogs were in the room licking and playing and bowling me over. I couldn't tell where one dog began and the other ended as they worked in concert, their enthusiasm for a new human barely contained. Cinnamon and Spice are sisters that are inseparable-they sleep intertwined and on top of each other. Cinnamon is shy while Spice loves attention. And Lloyd is a labradoodle that doesn't really look like one. He looks more like a wise old man with his long whiskers but he is in fact a puppy.

Samantha, Nina's in laws labradoodle (who I LOVE) plays with Lloyd and teaches him the lay of the land chiding him when he gets out of control. Samantha has been very gracious with the new dogs especially since it is her home. And little Millie the Maltese does her own thing. She can often be found on top of the dining table looking exasperatedly at the other dogs. 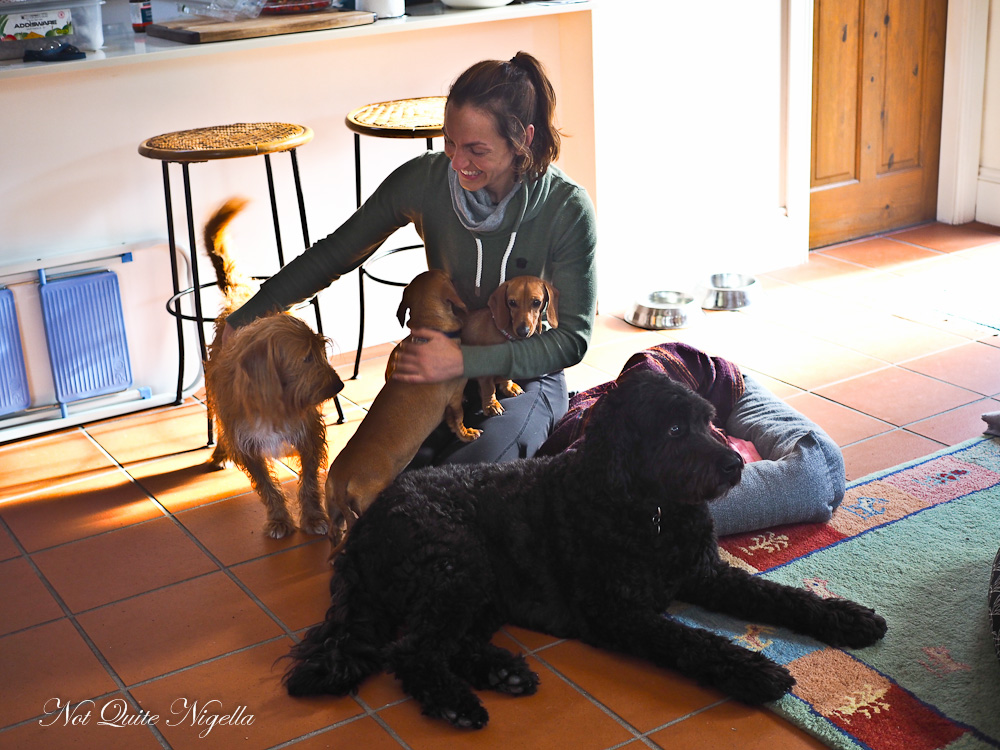 After a while the dogs calmed down and I took stock of what Nina had just bought. She offered me half her basil and coriander because she wasn't able to use them all (I wish they sold herbs by the weight!) and then I started tinkering around and made dinner for her and Garth. Since Garth has been a bit perturbed by the sudden appearance of five dogs in his house I thought that maybe a nice dinner would keep his mind off it, at least for a little bit :)

So tell me Dear Reader, how many dogs do you think you could look after maximum? Have you ever tried a Castella Cake? Do you think a nice dinner would put someone in a good mood? 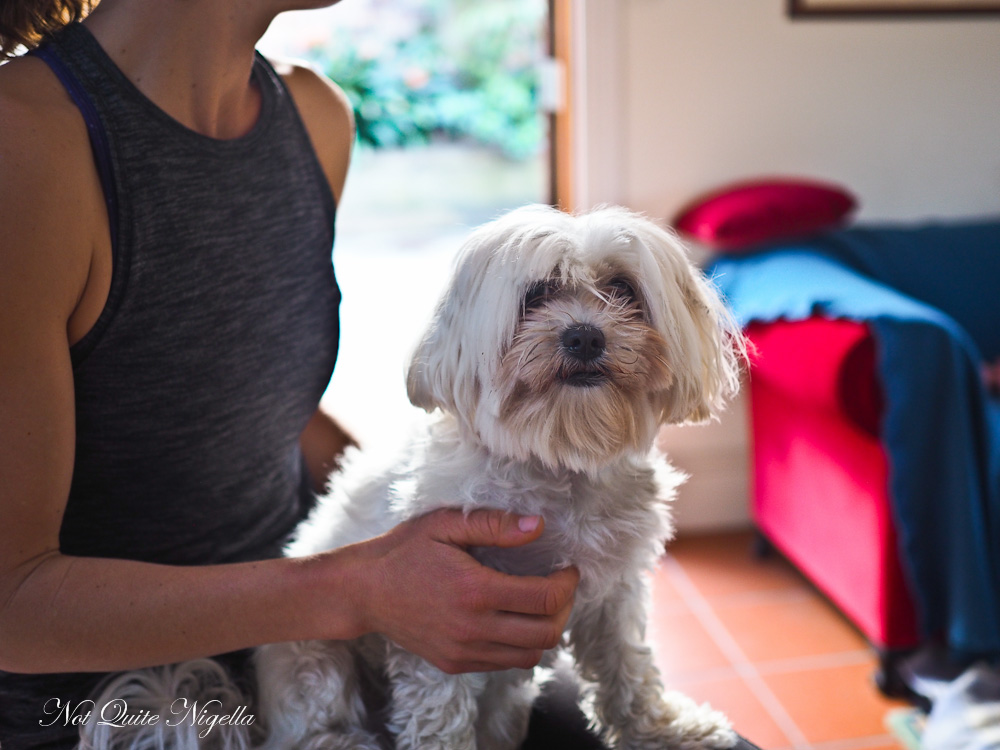 Tip: if you are baking this outside of summer, it helps to submerge the eggs in a bowl of hot water for a few minutes. Sometimes room temperature is still a bit chilly and doing this really affects the whipping quality of eggs. 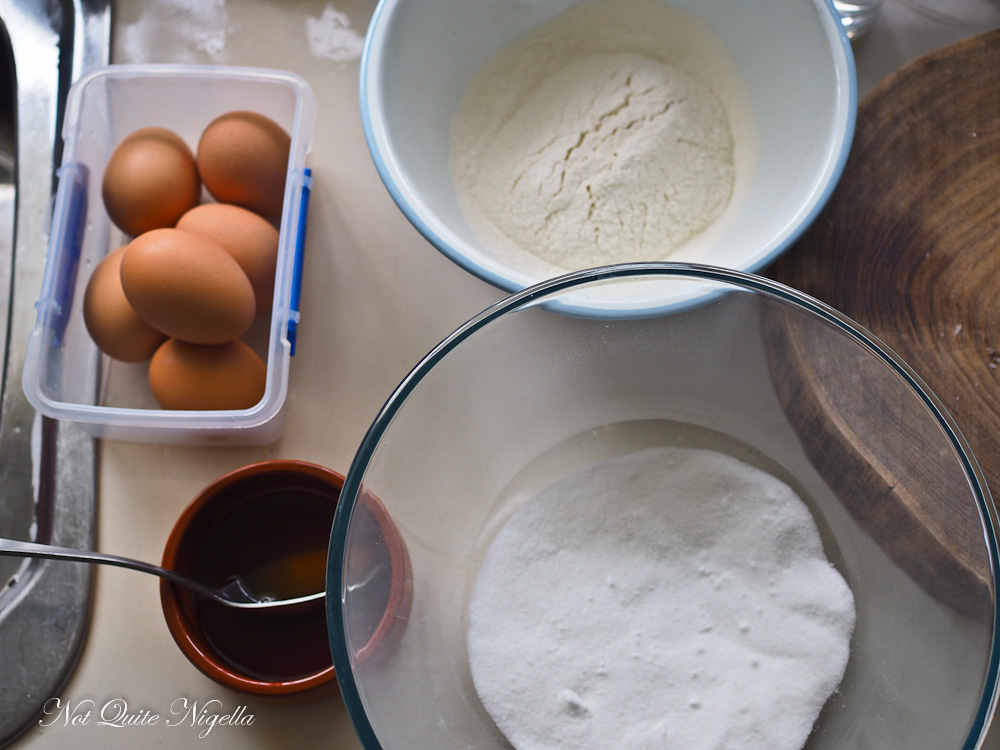 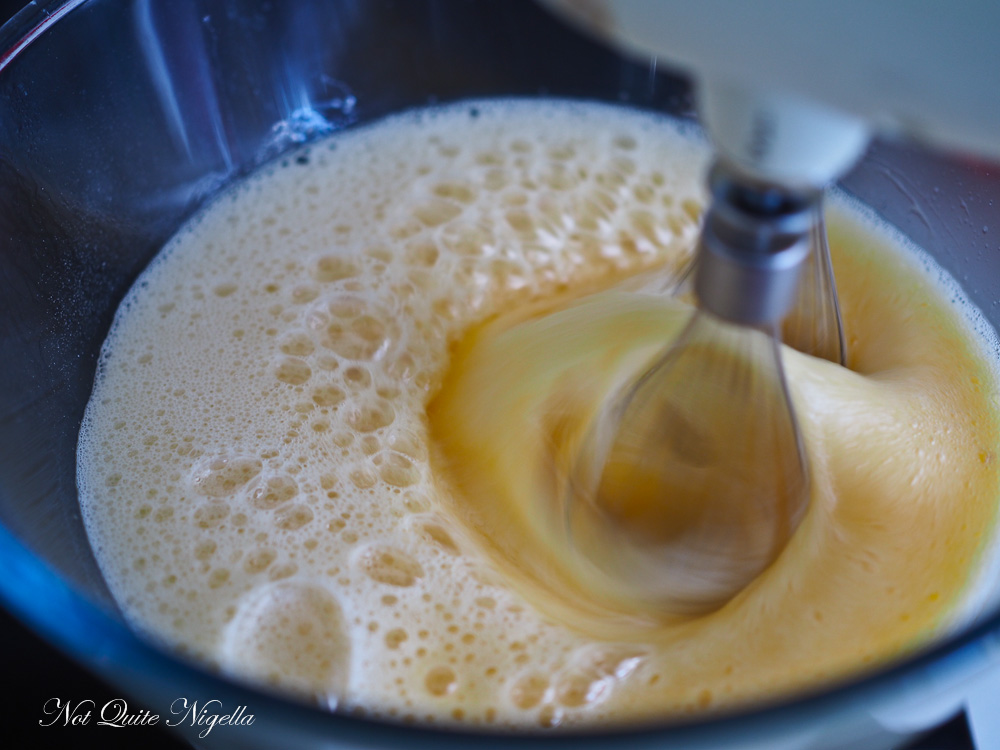 Step 2 - Place a large bowl on top of a saucepan of simmering water and have a temperature gun or thermometer ready. Whisk the eggs and caster sugar for about 5 minutes on medium speed until it becomes thick and fluffy. Check the temperature and once it hits 43C/109F remove the bowl from the saucepan and then continue to whisk on the benchtop. Add in the honey mixture and whisk on low for 30 seconds or so. Once you start to get ribbons and the mixture becomes 3-4 times the volume it is ready for the flour. 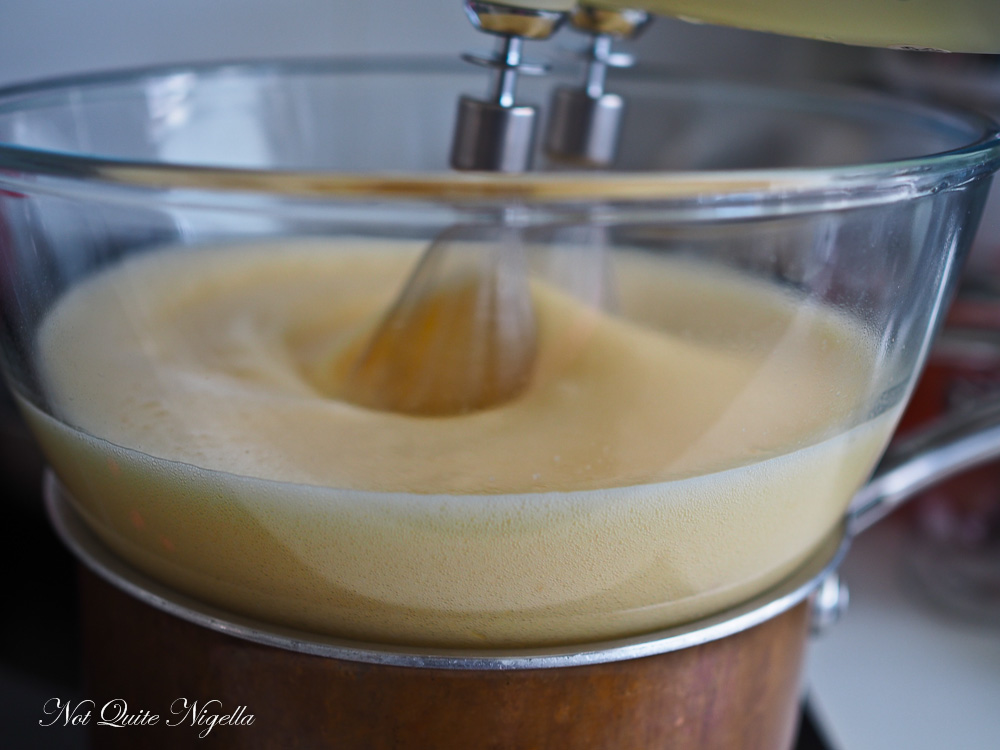 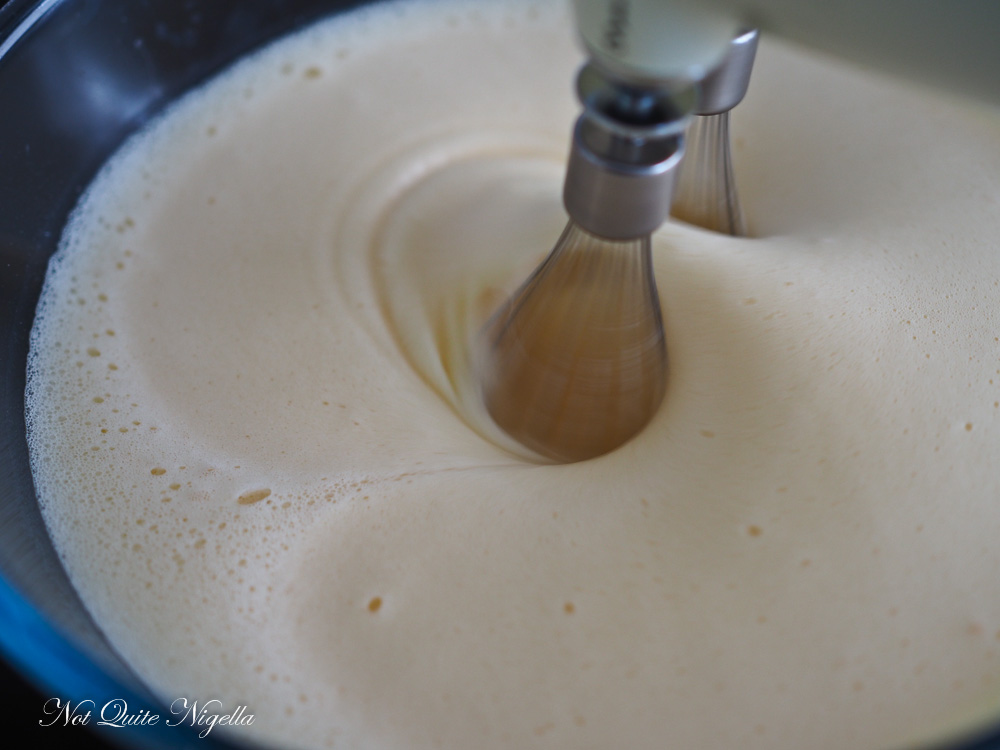 Step 3 - Sift half the flour into the egg mixture and then whisk in on low speed. Sift the remaining flour in and repeat until you have a uniform consistency of batter. If it isn't uniform the cake will separate into a heavy layer and a light layer. 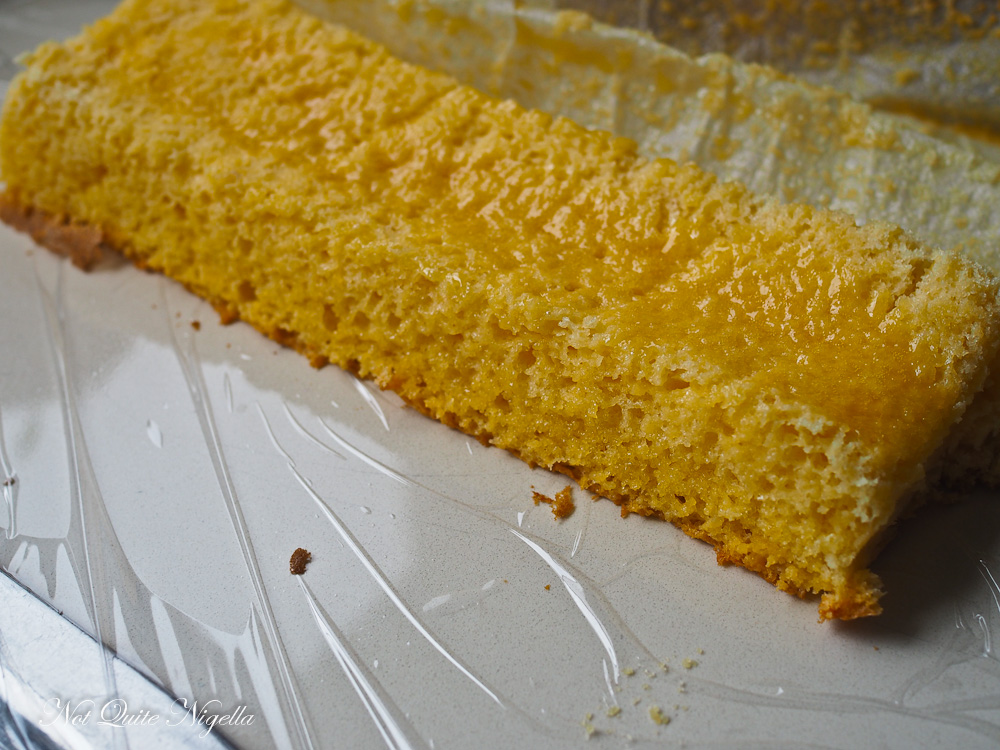 Fail: overbeating and not beating using a double boiler

Step 4 - Pour into the prepared tin and take a skewer or knife and run through the cake to disperse the air bubbles. Tap cake tin gently on benchtop and bake for 45 minutes or until a skewer inserted comes out clean. 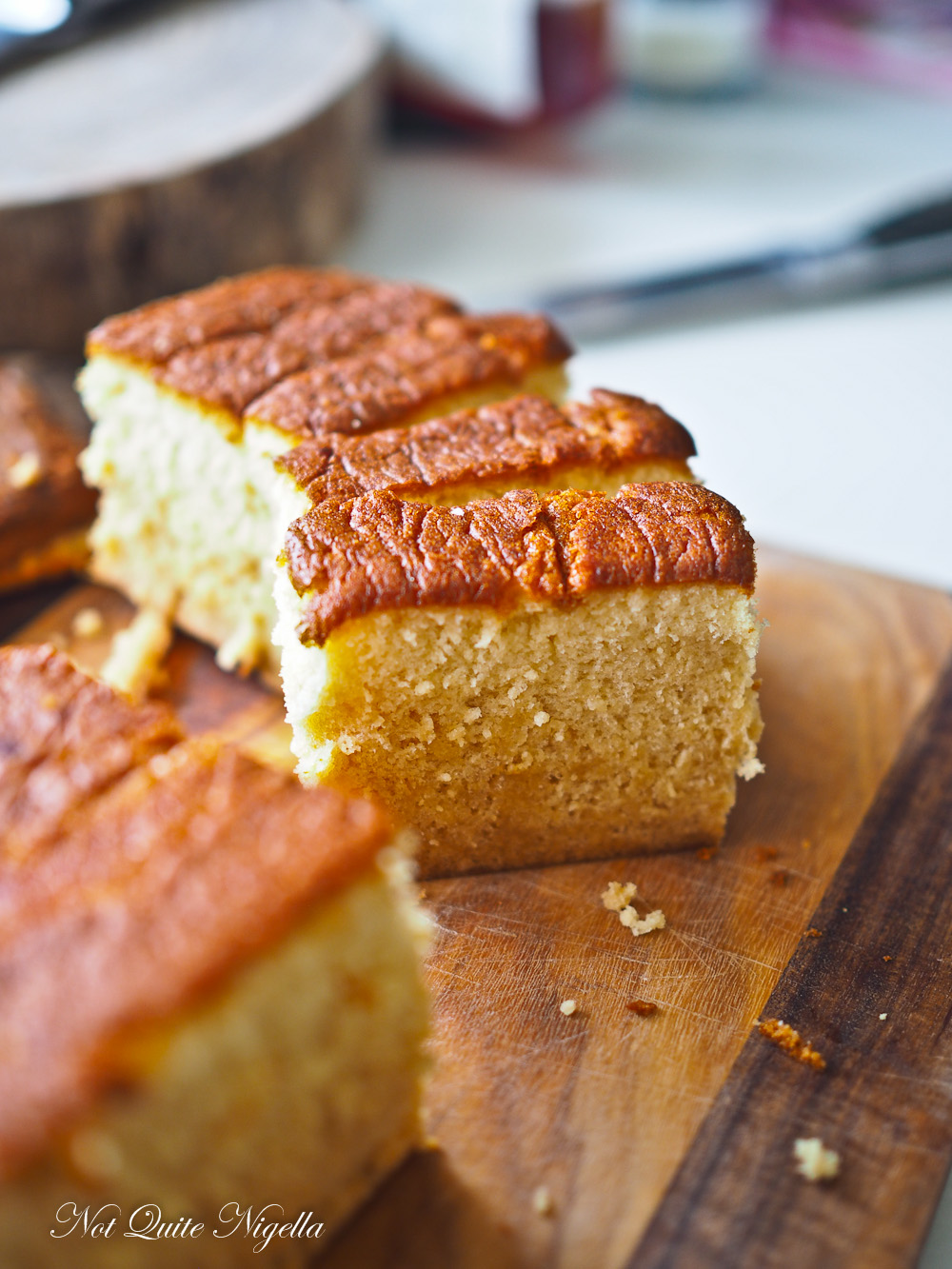 Fail: not mixing in the flour enough so that the cake separates into two layers

Step 5 - When removing the cake from the oven drop it a couple of times on the bench - this is to prevent it from shrinking. Brush with the glaze and allow to cool for 3 minutes. Lay out a large sheet of cling film and wrap the cake inside this completely and let it cool inside the plastic. This keeps the cake very moist. Keep it in this for 24 hours. 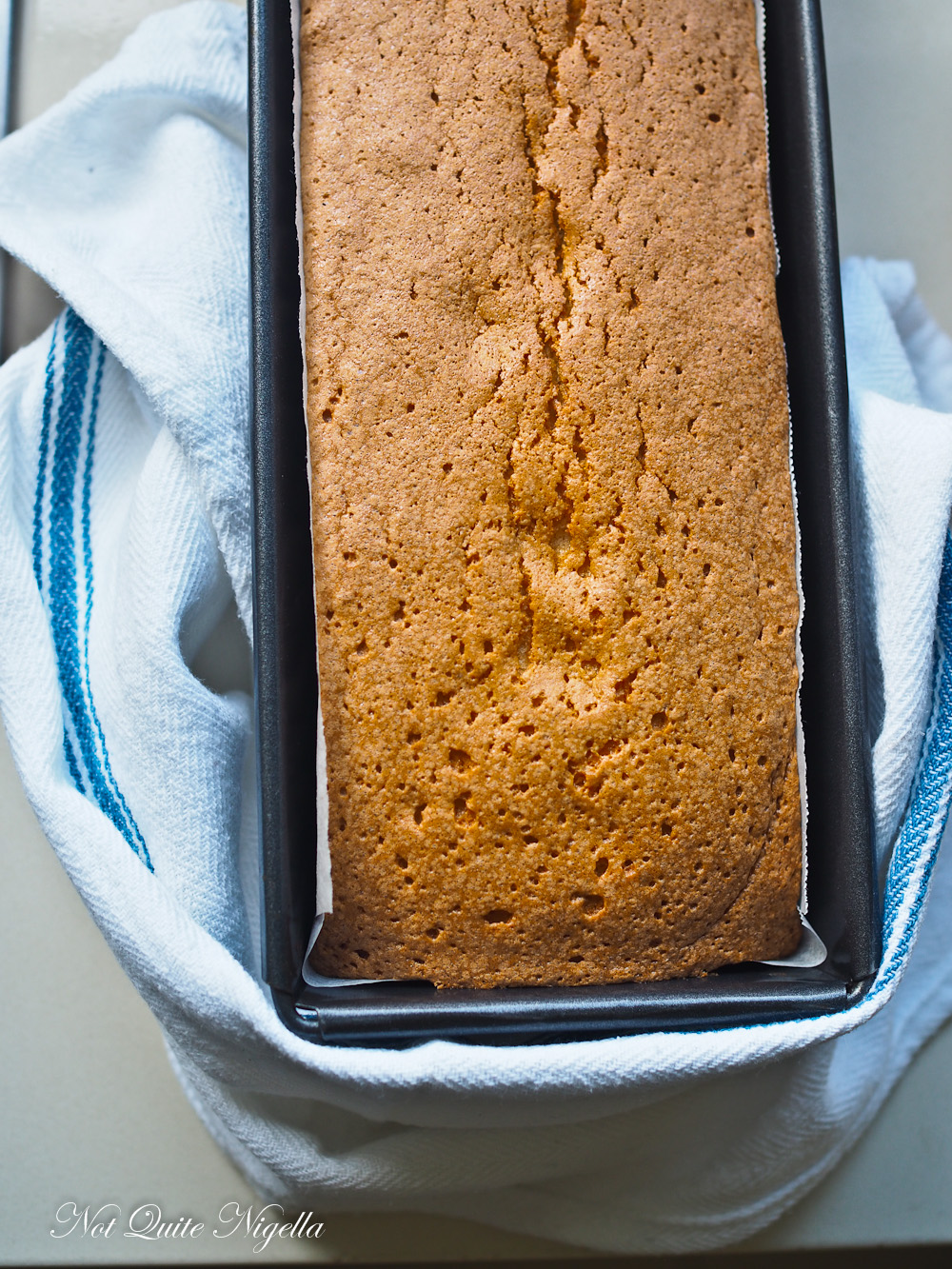 Step 6 - Trim the sides with a very sharp knife and slice into pieces. This cake is best on day 2 or 3 after baking and stores well in an airtight container in the fridge. 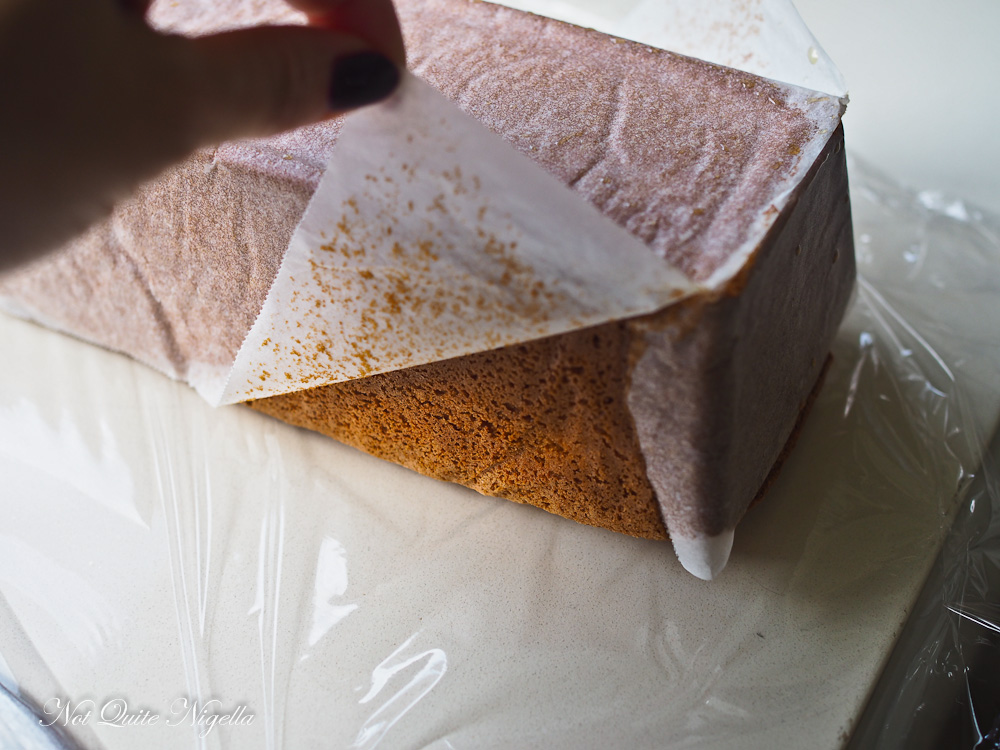 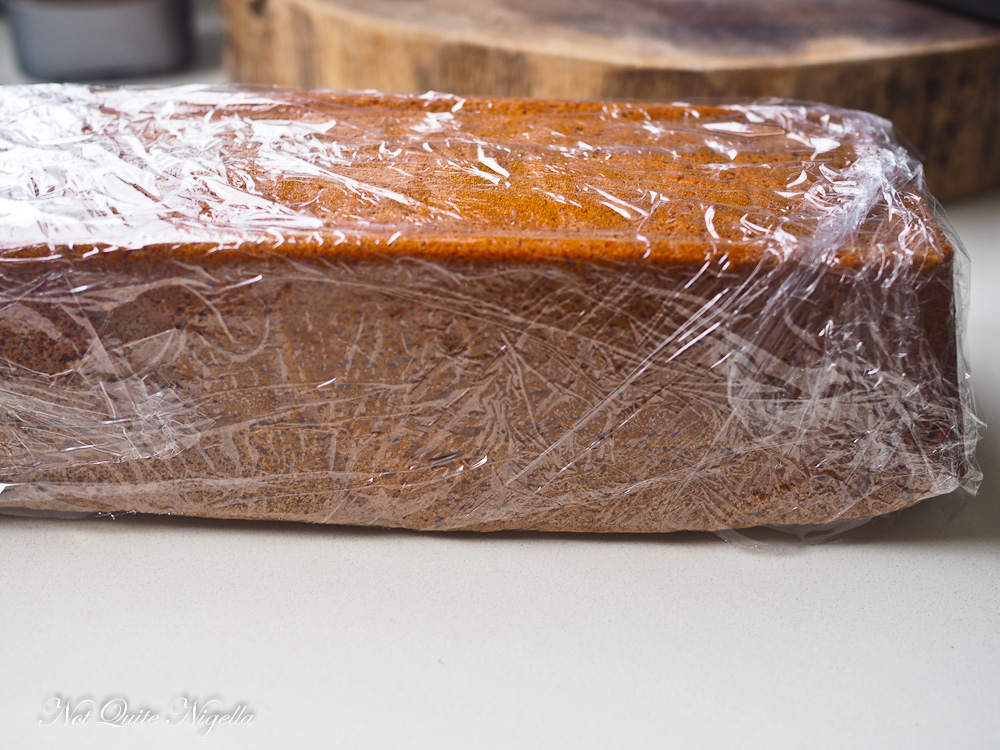