A Tale Behind Saga, Enmore 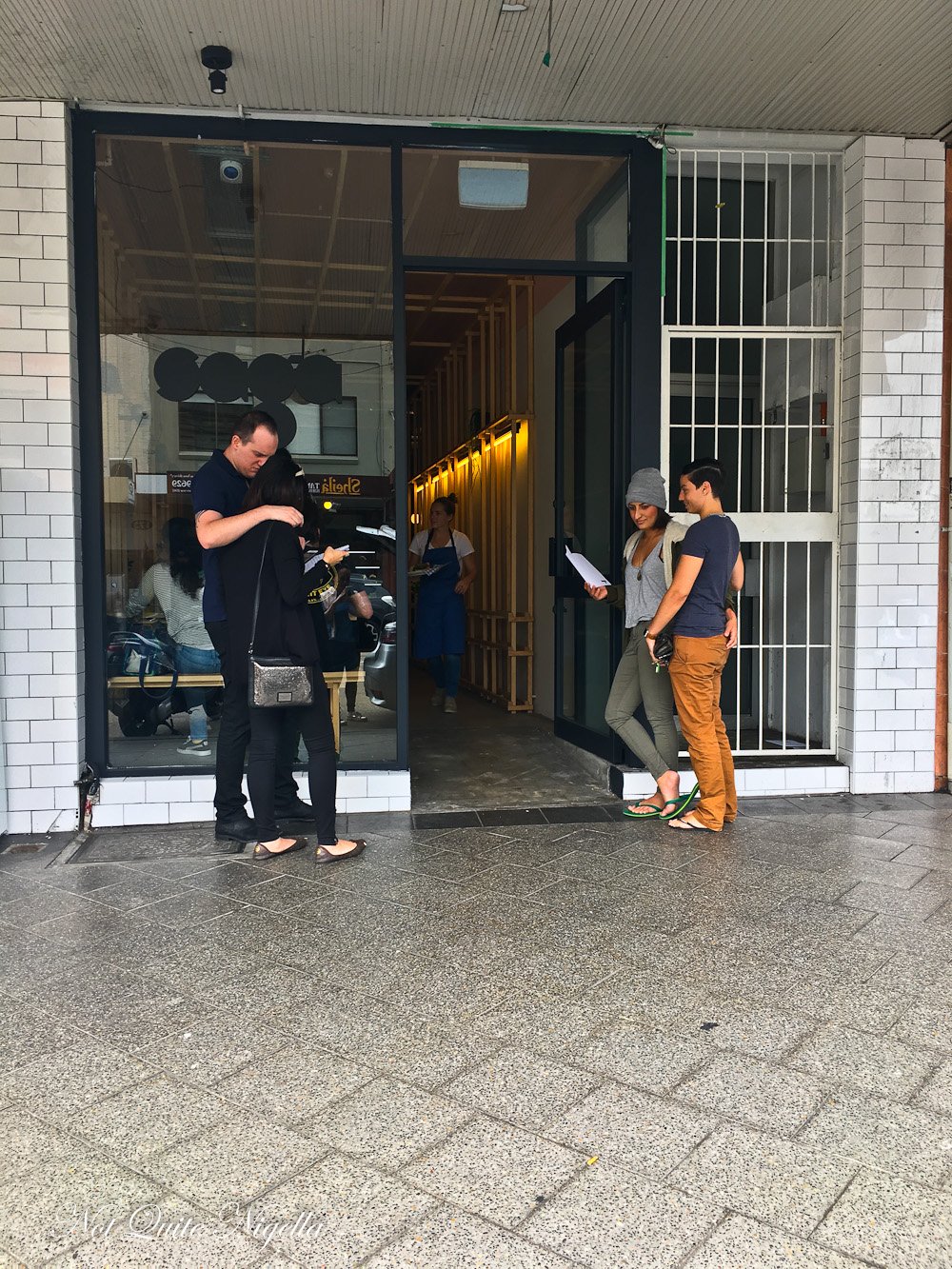 Former Hartsyard pastry chef Andy Bowdy has just opened up his own cafe called Saga. Known for his elaborate layer cakes and soft serves, we were curious to find out what is on the menu at the Enmore Road cafe. 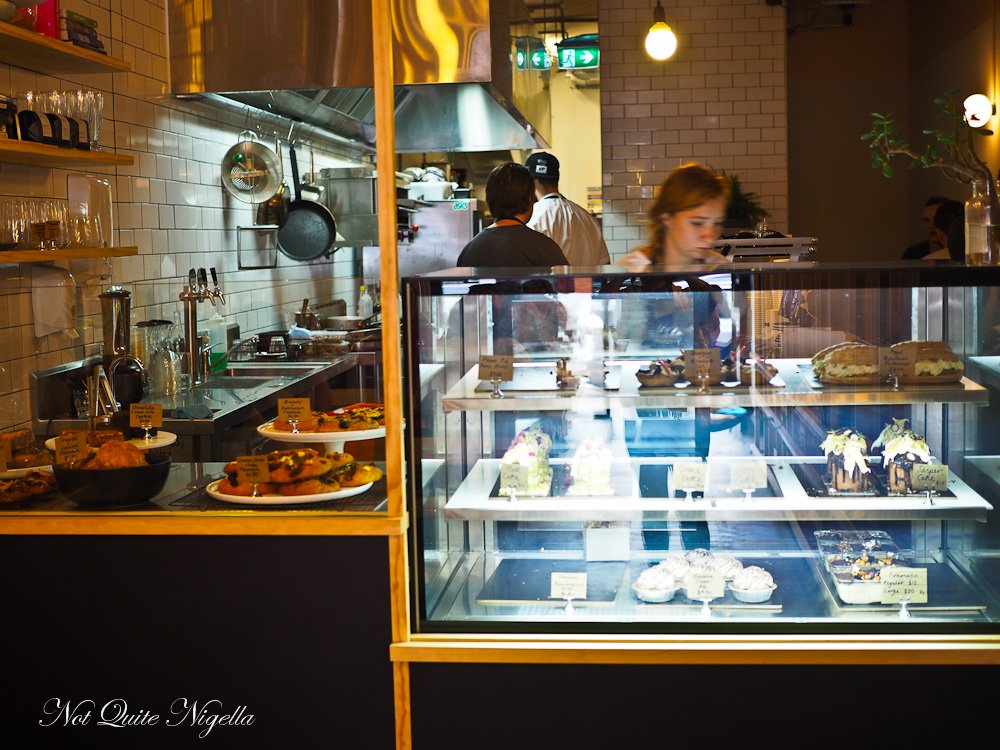 The name Saga has significance in two ways. Just ask Andy's life and business partner at Saga, Maddison Howes. "When we looked up the meaning of saga it said 'a continuation of a story' which seemed fitting. But the other reason for the name is because he loves Asics Saga runners," she explains. 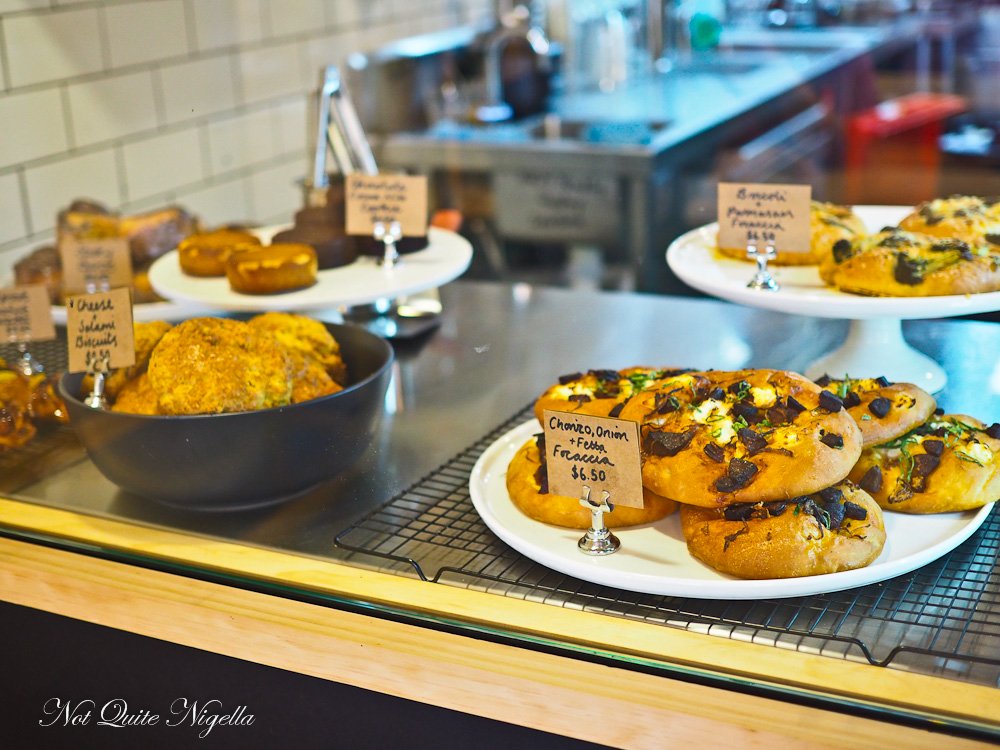 "We've always talked about opening up the space ever since Andy left Hartsyard. We both really love cafes and brunches and that sort of thing so we both decided that was the direction to take it in. Obviously we're both from Hartsyard and we thought maybe we should spread our wings and it just so happened that we came in and saw this space," says Maddison. 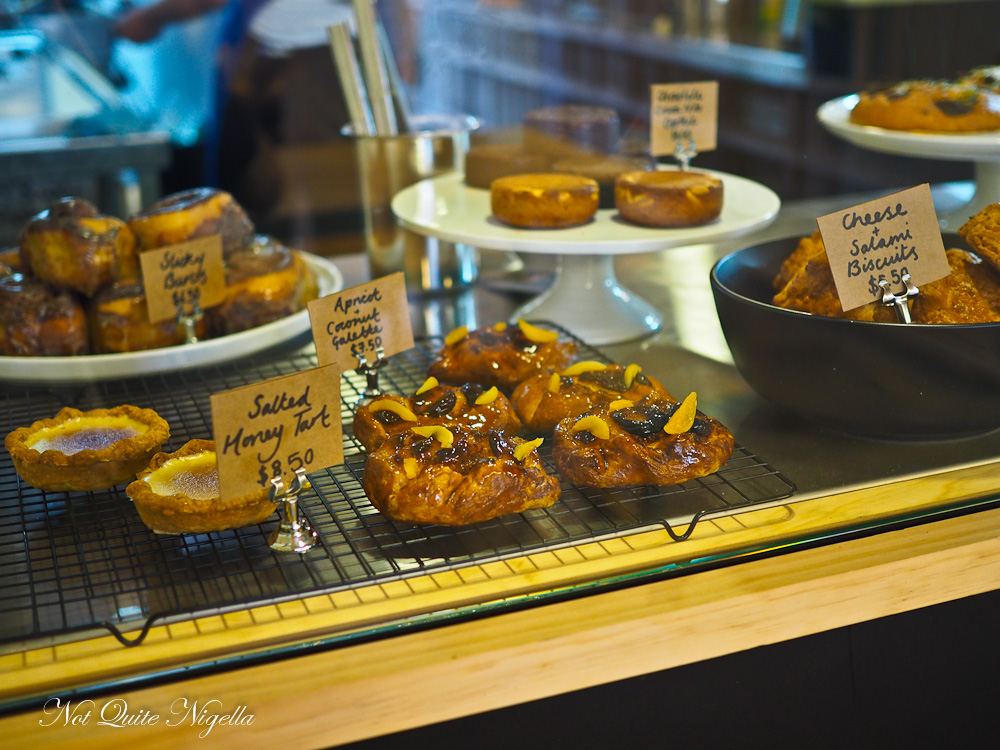 Saga is in a small rectangular space with timber bench share seating and even though it is very early days the crowds have flocked. So what is on offer? Cafe style food and those amazing cakes that he has become known for. Curiously enough though, "We only decided to add the mini cakes last week," says Maddison. 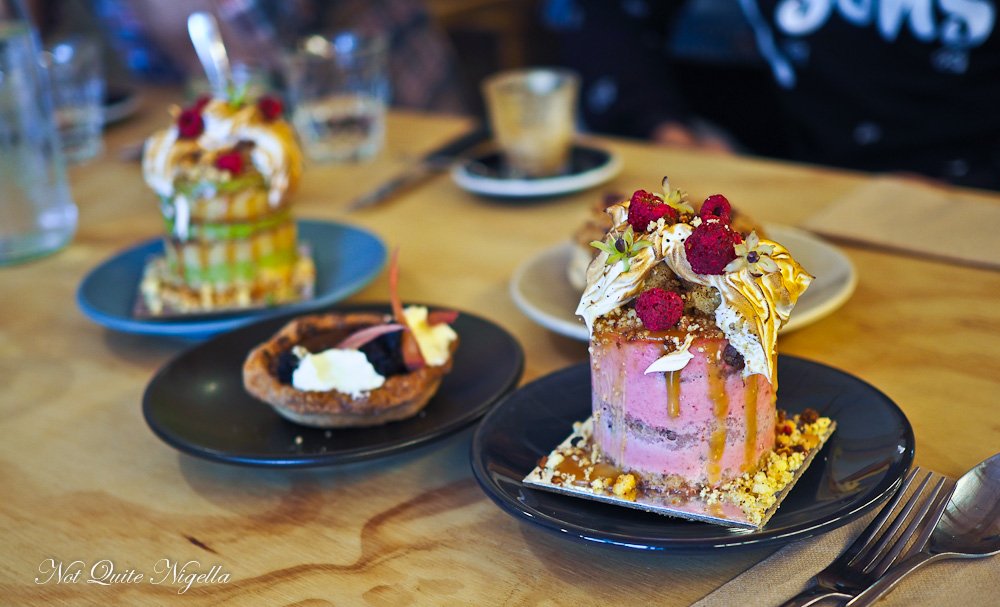 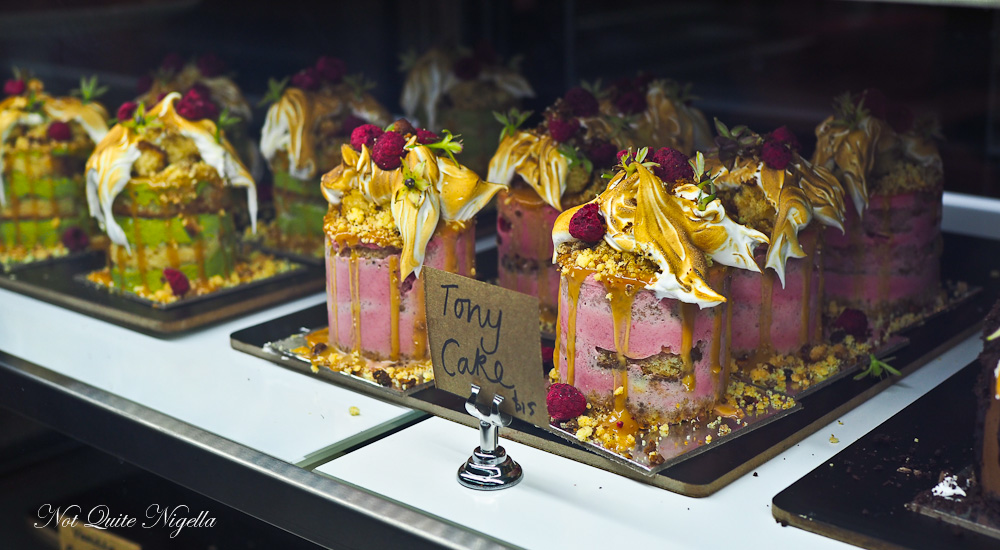 Maddison says, "Andy loves the states, the last four trips have been to the states, mostly New York. Obviously working at Hartsyard with (American born) Greg too." Above the counter there is a pile of North American cookbooks from Joe Beef, Gjelina to Artisan Jewish Deli while the sweets are items like Shoofly Pie, Pecan Pie Paris Brest and Sticky Buns. Even the tiramisu is not your ordinary tiramisu - it's a white chocolate mascarpone tiramisu with Tequila, Kahlua, Nutella crema and hazelnuts. You can order at the counter or you can wait for table service from one of the lovely staff members. 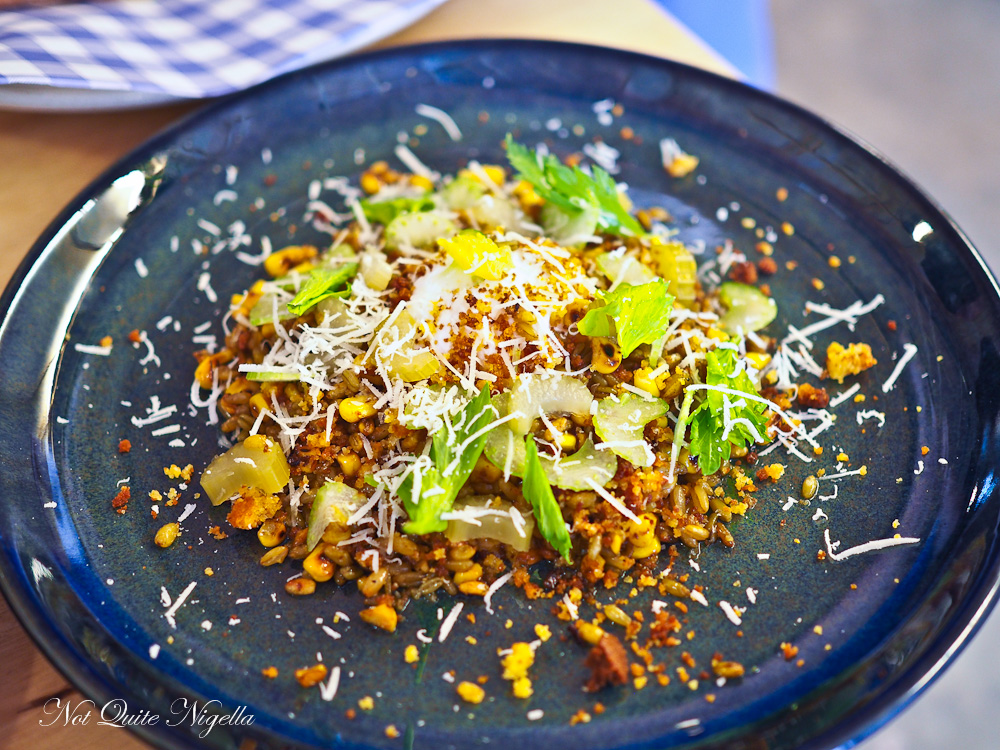 I start with the savouries. The corn pudding is a whole lot of flavours in one-kind of like one of his cakes. There's charred corn, spelt, cornbread crumb, pickled celery and a luscious soft yolked poached egg. The spelt and the crumbs give this a chewy and crunchy texture. It's pretty, with a whole lot of textures and flavours, kind of like if creamed corn married up. 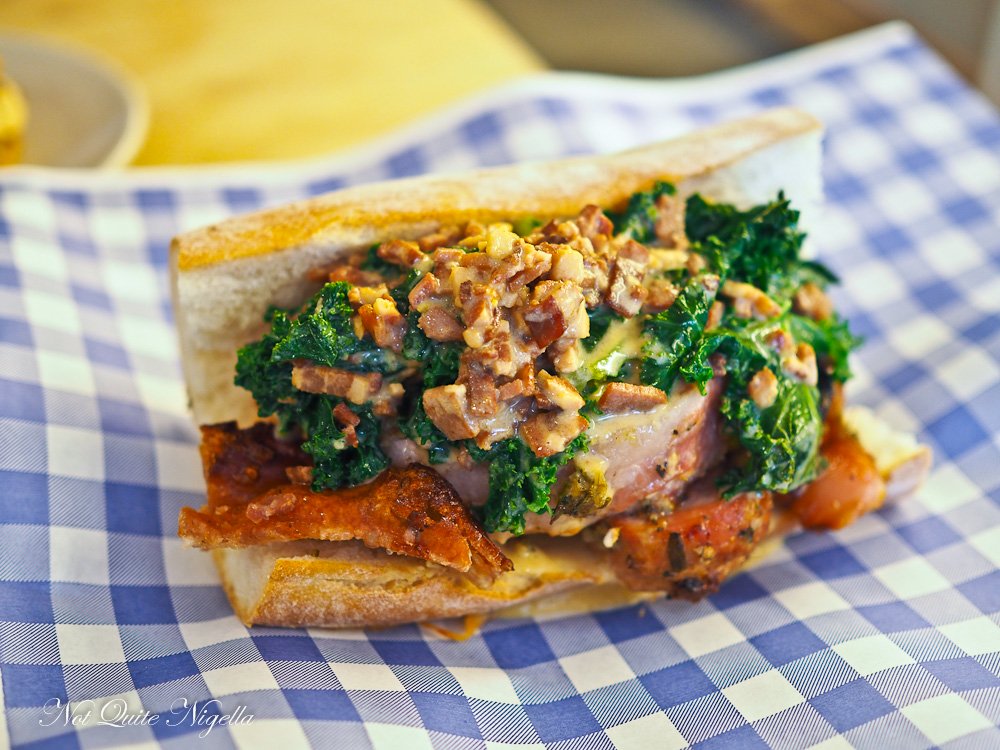 There are four sandwiches to choose from and I go for the Philly Morgs sandwich. It is for pork lovers with a double serve of pork with thickly and generously sliced juicy porchetta, braised kale and bacon dressing. There's even a bit of tang in there that reminds me of sauerkraut. It's enormous, generously portioned, succulent and juicy. 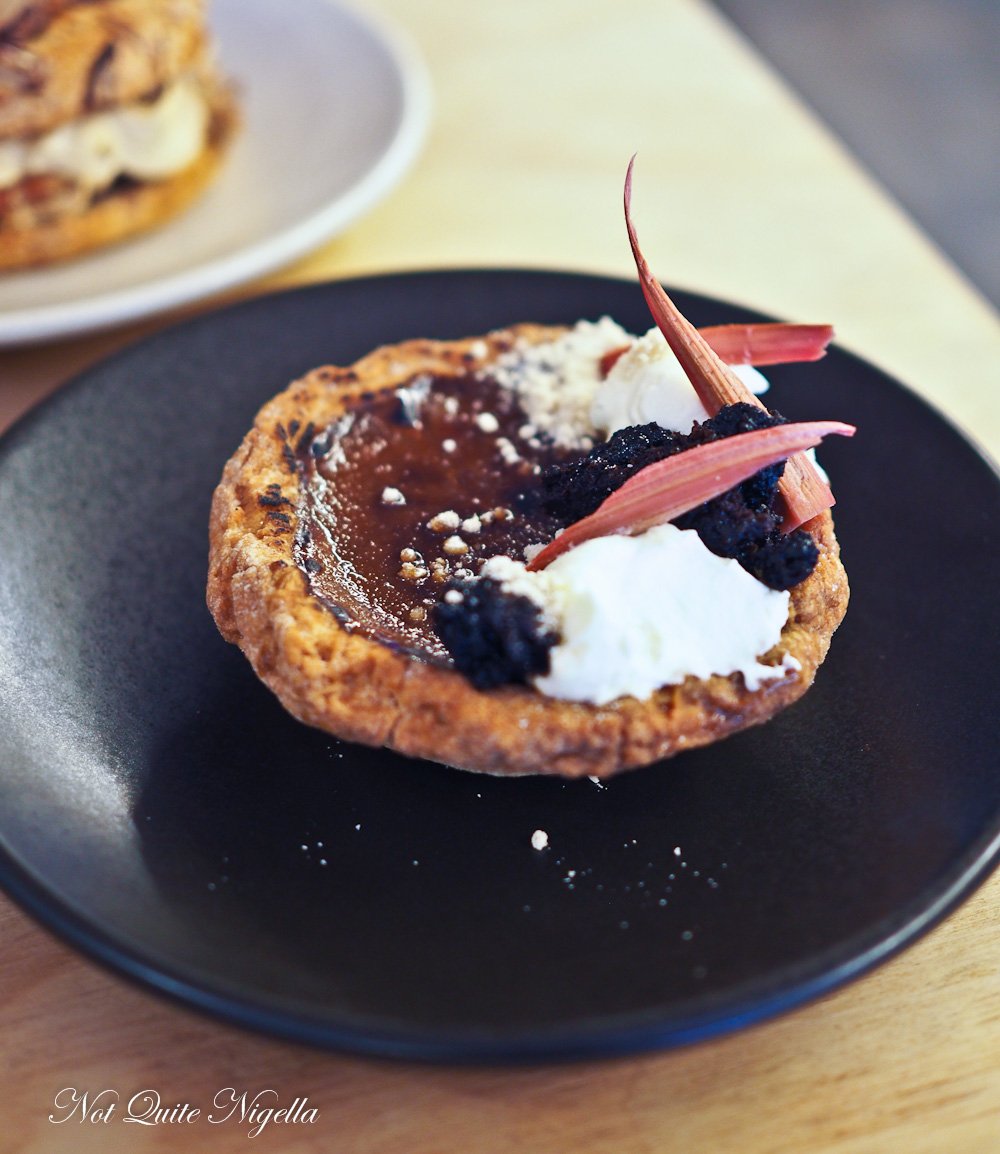 And then we come to the sweets. The biggest decision will be which ones to order. Bring a group of sweet tooths for maximum sampling opportunities. The rhubarb shoofly tart has a distinct molasses licorice flavour with a brulee top. It's good, the pastry buttery and flakey and the custard has a hidden layer of sauteed rhubarb and this is for those that like molasses. 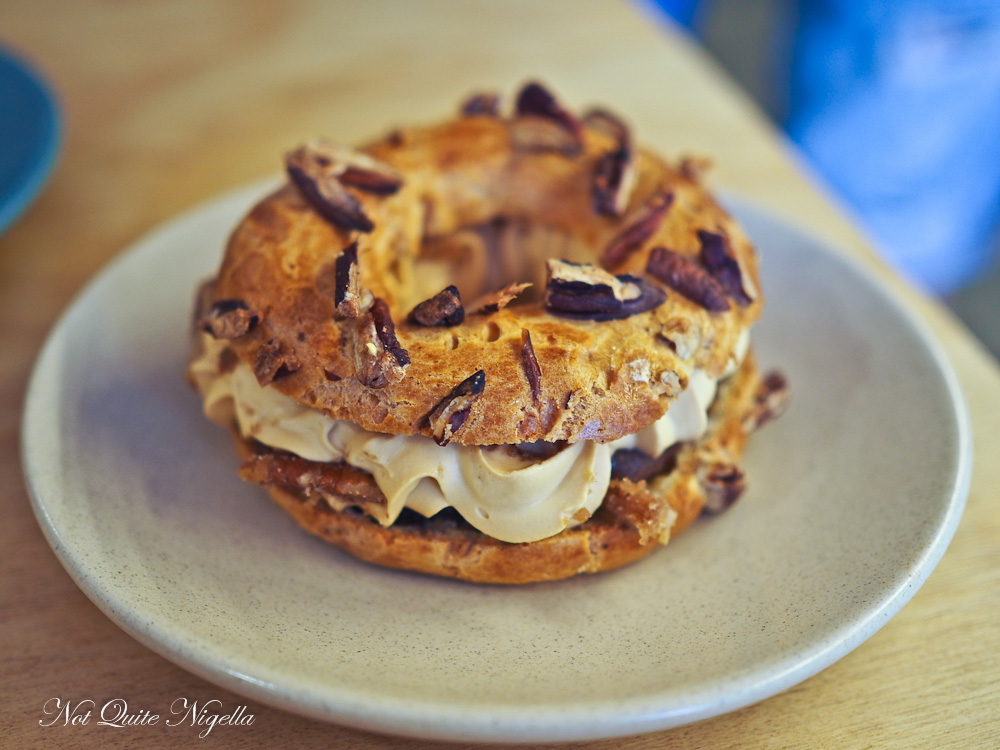 My heart is won by the Pecan Pie Paris Brest. It is a perfect choux ring filled with all of the sweet goodness of a nutty pecan pie including crisp toasted sugared pecans and a salted caramel chantilly cream inside and a pecan pie mix made from cake offcuts and toasted sugar pecans.

The cakes are mini versions of the larger cakes without any shortcuts. Maddison says, "They're a lot of work... they're not made from a slab they're all built individually." This presents a challenge for Andy and his team as he has a restaurant background so he is used to service not production. The mini cakes are also a way for people to try the large cakes before ordering them as the large ones start at $220 each. 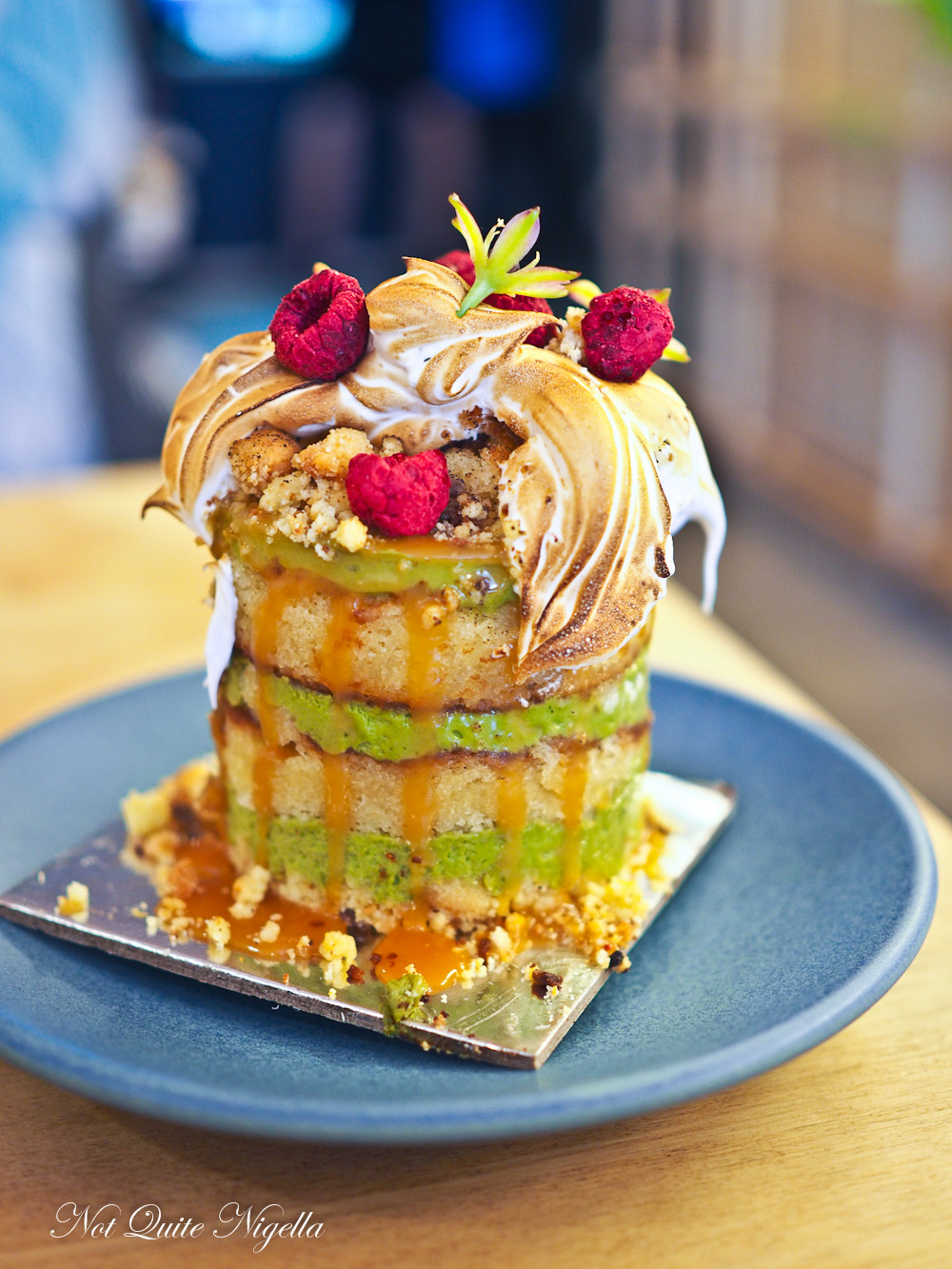 The two cakes, both resplendent wearing fur collars of meringue are The Matty and The Tony. The Matty is a matcha mousse cake with milk crumb, coconut chew, yuzu curd, vanilla butter cake, salted caramel and torched meringue. The thing about these cakes is that even though there are so many components, they're all carefully created so that it isn't a mess of a multitude of ingredients, instead they all fall together in harmony. 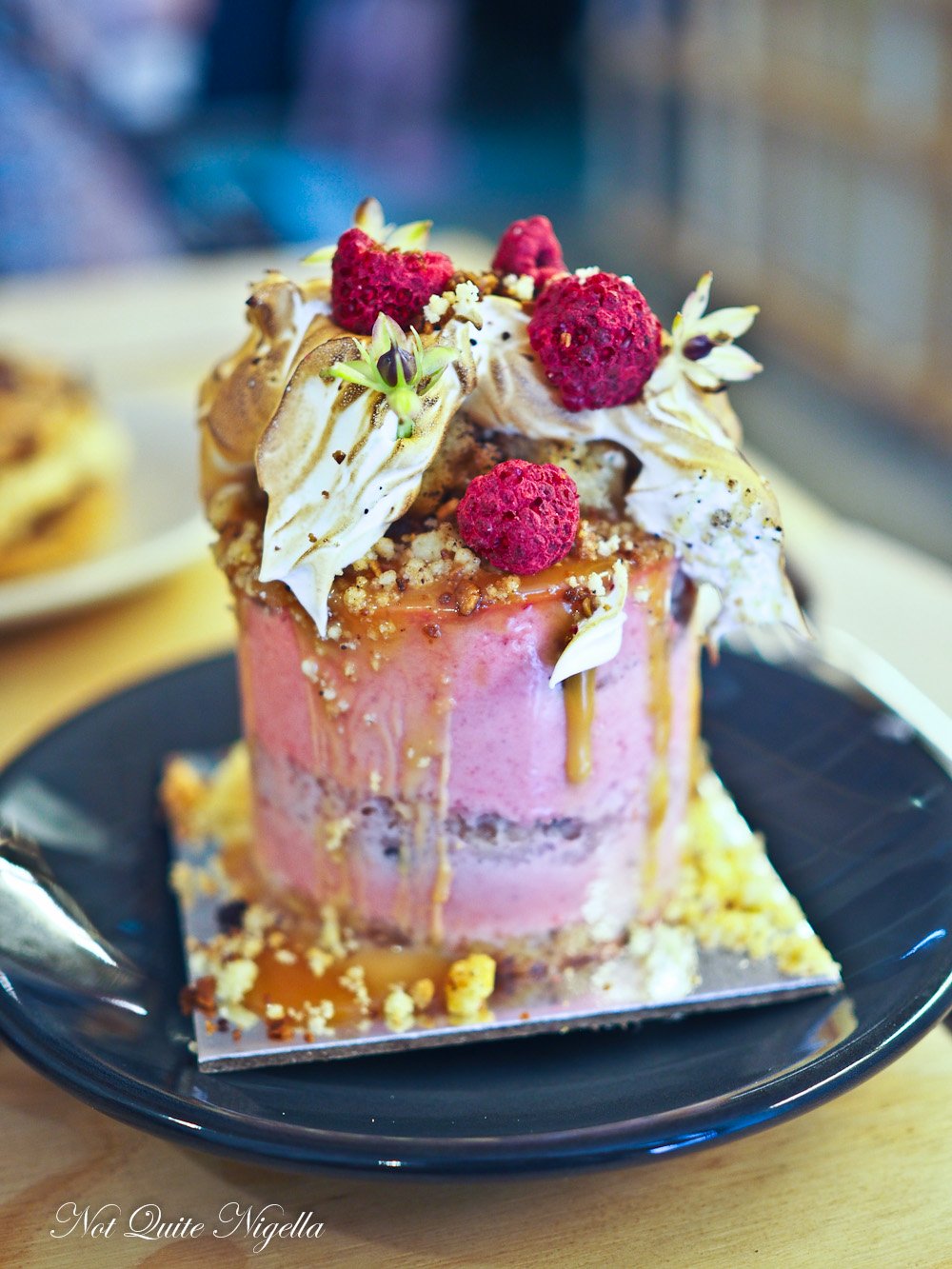 The Tony, named after Andy's father is all about tangy raspberries, creamy mousse, cheesecake, lemon gel, chocolate cake, hazelnuts, freeze dried raspberries, flowers and crumbs, so many crumbs! This is denser because of the cheesecake but the raspberries give it a nice tartness too and offset the richness of the cheesecake. It's hard to choose a favourite between the two cakes. I guess the best thing to do is bring your sweet toothed squad and try them all...

So tell me Dear Reader, what dish did you like the look of? Would you just go for sweets or would you try savoury first? And would you like the Matty or the Tony better?