Under The Spell Of The Cherry Moon General Store, Annandale 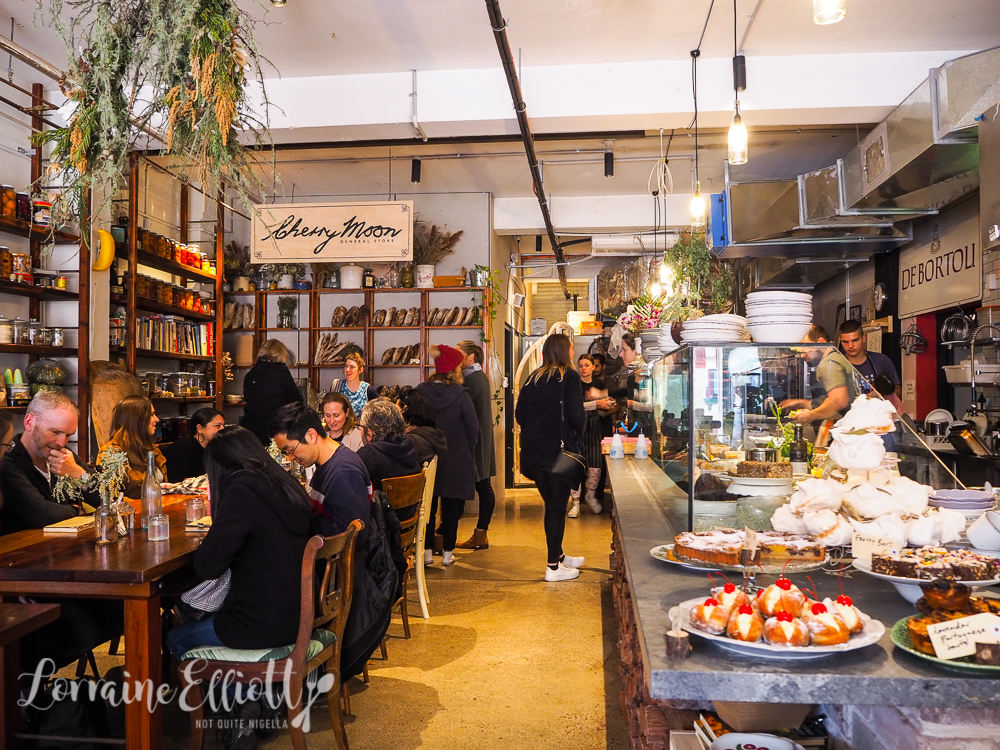 Sometimes you just adore a place and you wish you lived closer. Cherry Moon General store is a brand new addition to Annandale. It's a wood fired bread bakery, cafe and serves up uniquely beautiful and wholesome cakes. And not surprisingly, it's very popular and already a hit even in its first few days of opening. 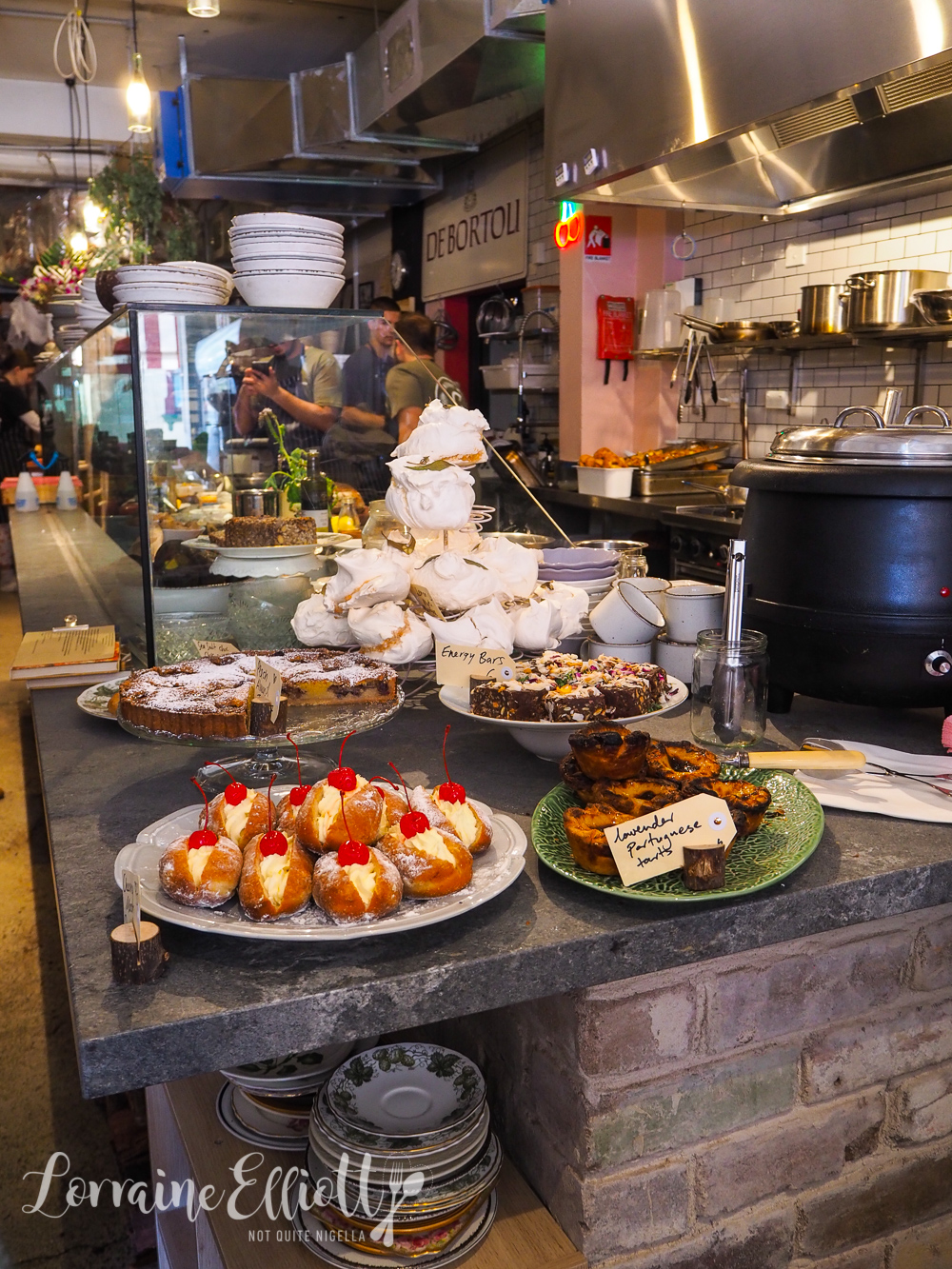 I suspect a lot of people have also been struck by Cherry Moon. A Dear Reader and Annandale local Jennifer messaged me about it after she finished eating there and I'm sure she's not the only one. Four days after opening there was a big queue of people waiting for them to open up. 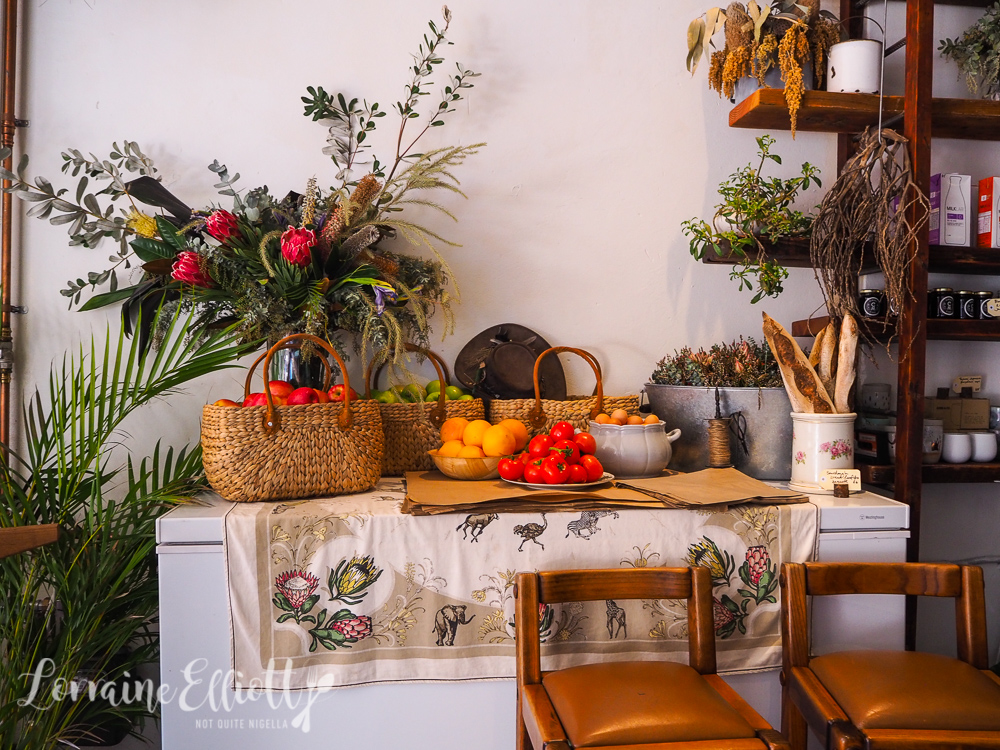 New Zealand born chef Kimmy Gastmeier is the baker and one of the owners of Cherry Moon and she loves her wood fired oven and bread. Formerly a chef at Rockpool and Tetsuya's she discovered baking bread was her real love. "I always wanted to do my own thing and the day I made bread with Mike (McInerney) because he was my head chef at Rockpool I felt 'This was it'. All my friends were opening up restaurants and the day I made bread with the living fermentation I felt alive, there was purpose." 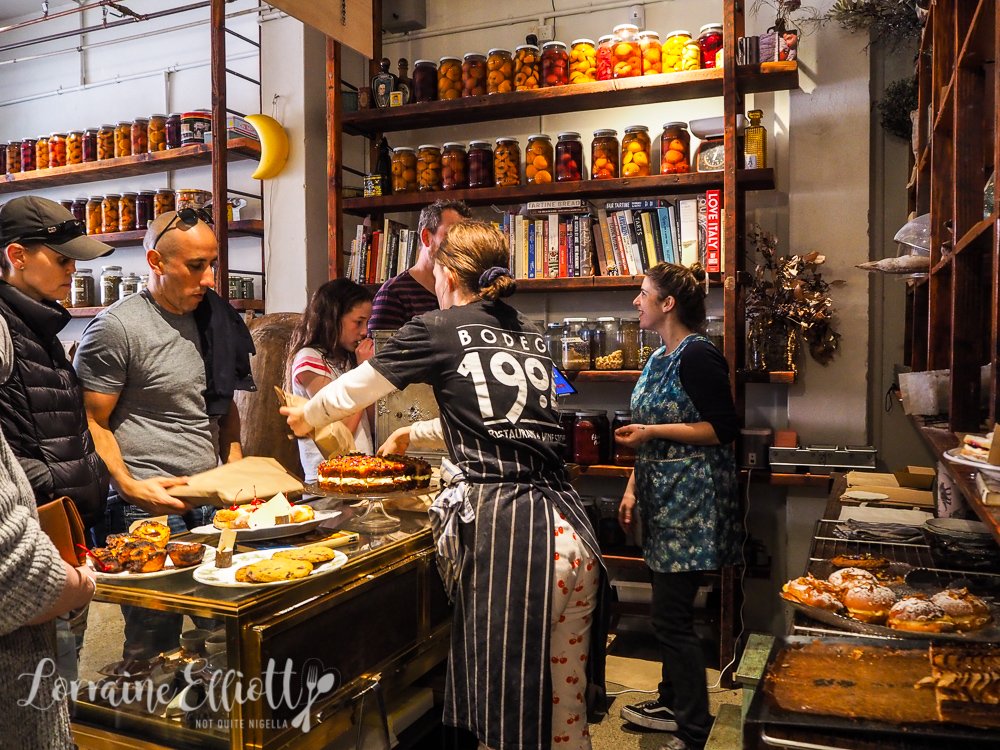 After working in Sydney for 10 years, she was exhausted and started to get sick and had to adjust her diet. She started to learn about fermented foods, broths and breads and moved to the Blue Mountains where she came up with the concept of Cherry Moon. Finding a location wasn't easy though with numerous setbacks over the three years. 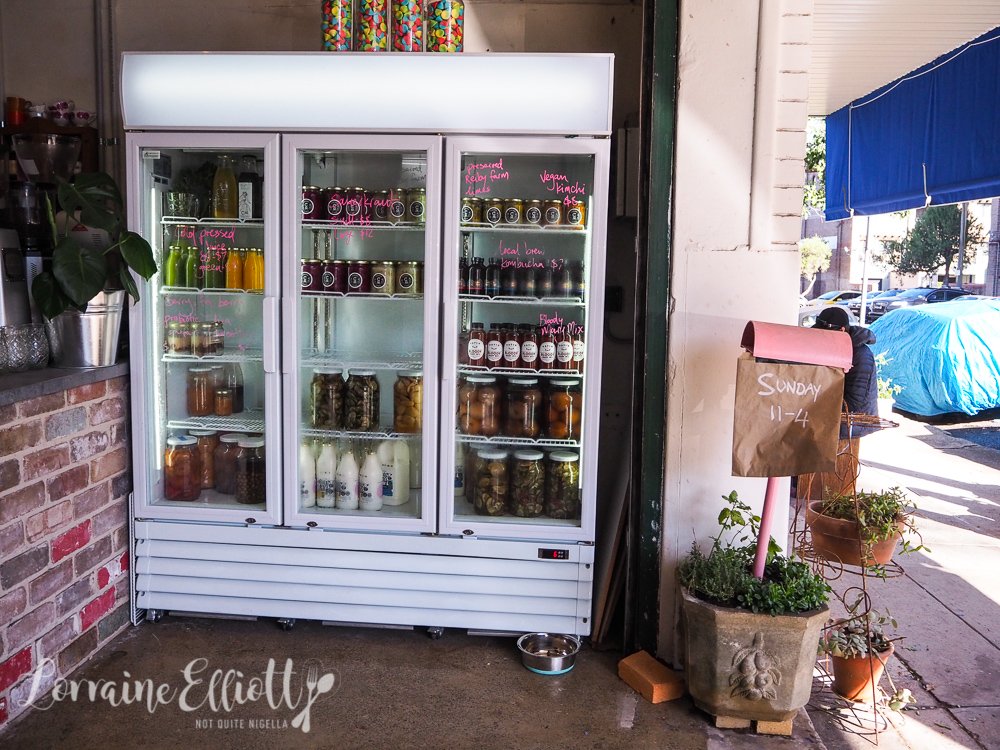 "I was about to surrender everything and I was about to sell all the bric or brac. I was living so broke but believing this thing would still happen," she says. Then she went on a trip to Uluru to learn about bush food. "On that journey I totally surrendered and felt like everything was going to be ok. The day I came back this opportunity came up," Kimmy says.

The location for Cherry Moon General Store is a former De Bortoli wine cellar. She agreed to setting up as long as she could build her beloved wood fired oven here. "There as an amazing Australian guy Alan Scott from Tasmania who was really passionate about wood fired ovens so he travelled all around the world learning about ovens-Roman ovens, Scotch ovens and he came up with the plans to built that oven," explains Kimmy. 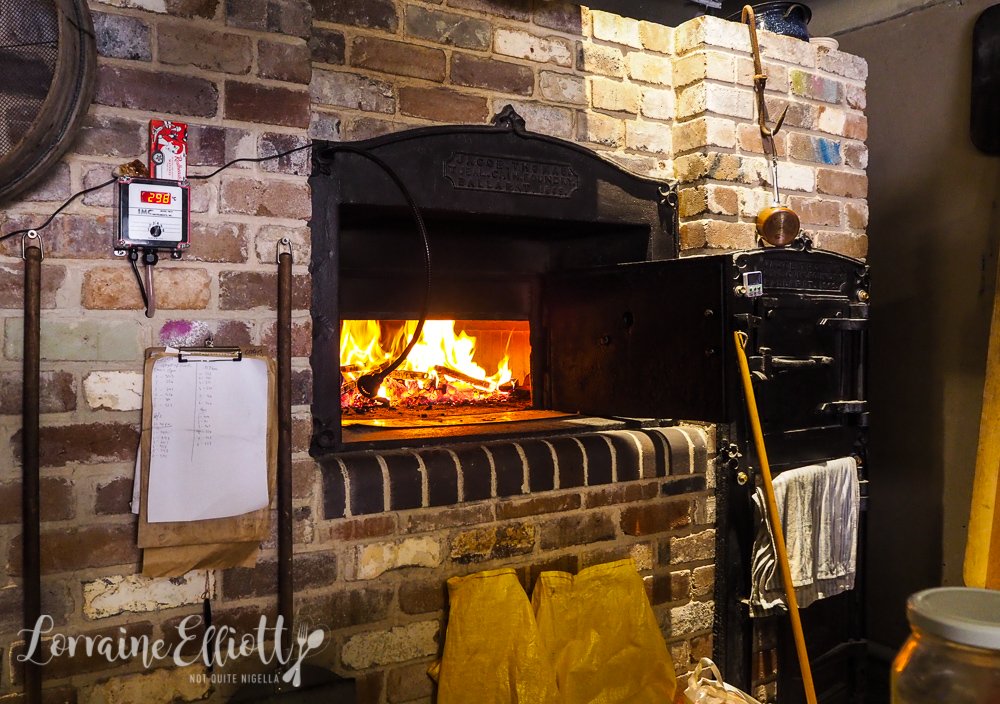 He passed away but with the help of others she built her oven and then spent time curing it and it took a week to get the temperature up to 500C. The facade of the oven is from a 150 year old bakery in Ballarat. "That whole oven is a total miracle," she says. The bread dough is proved in the enormous European bread bath. The oven's fire is burnt at night and then cleaned out and in the morning they place the dough in there to bake. 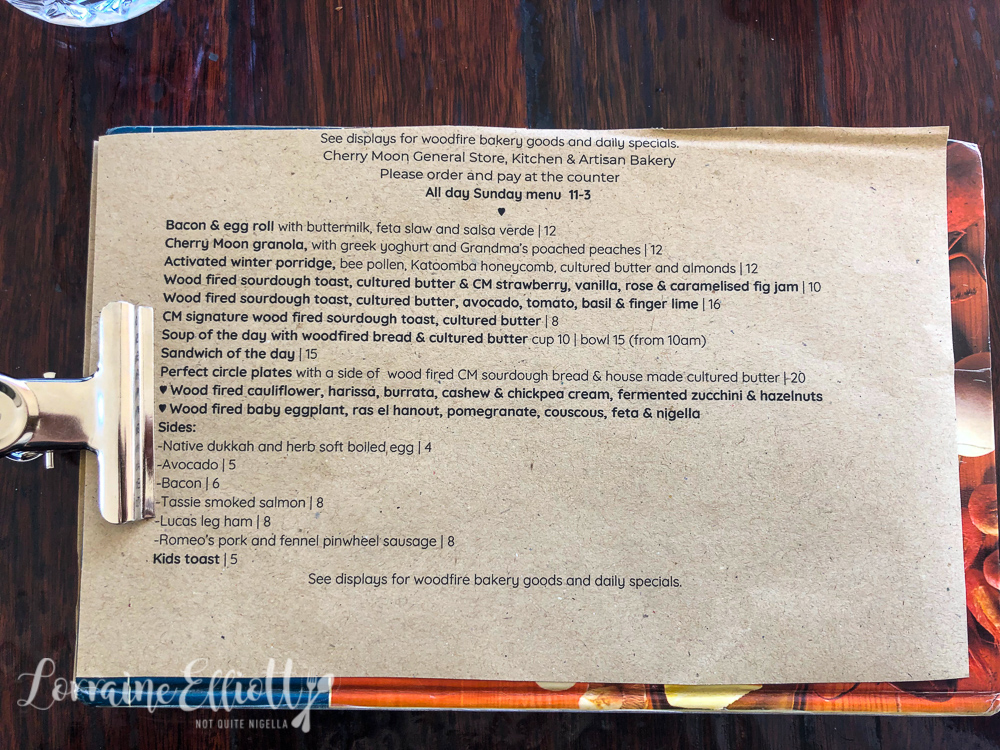 At the cafe and bakery service is very friendly. All the staff that walk past say hello and there are large communal tables inside as well as outdoor dog friendly seating. We take a seat and look at the menu. It's in a book and features a neat list of offerings at very reasonable prices. You order at the counter, try (and fail) to resist the cakes and then take a playing card to your table. 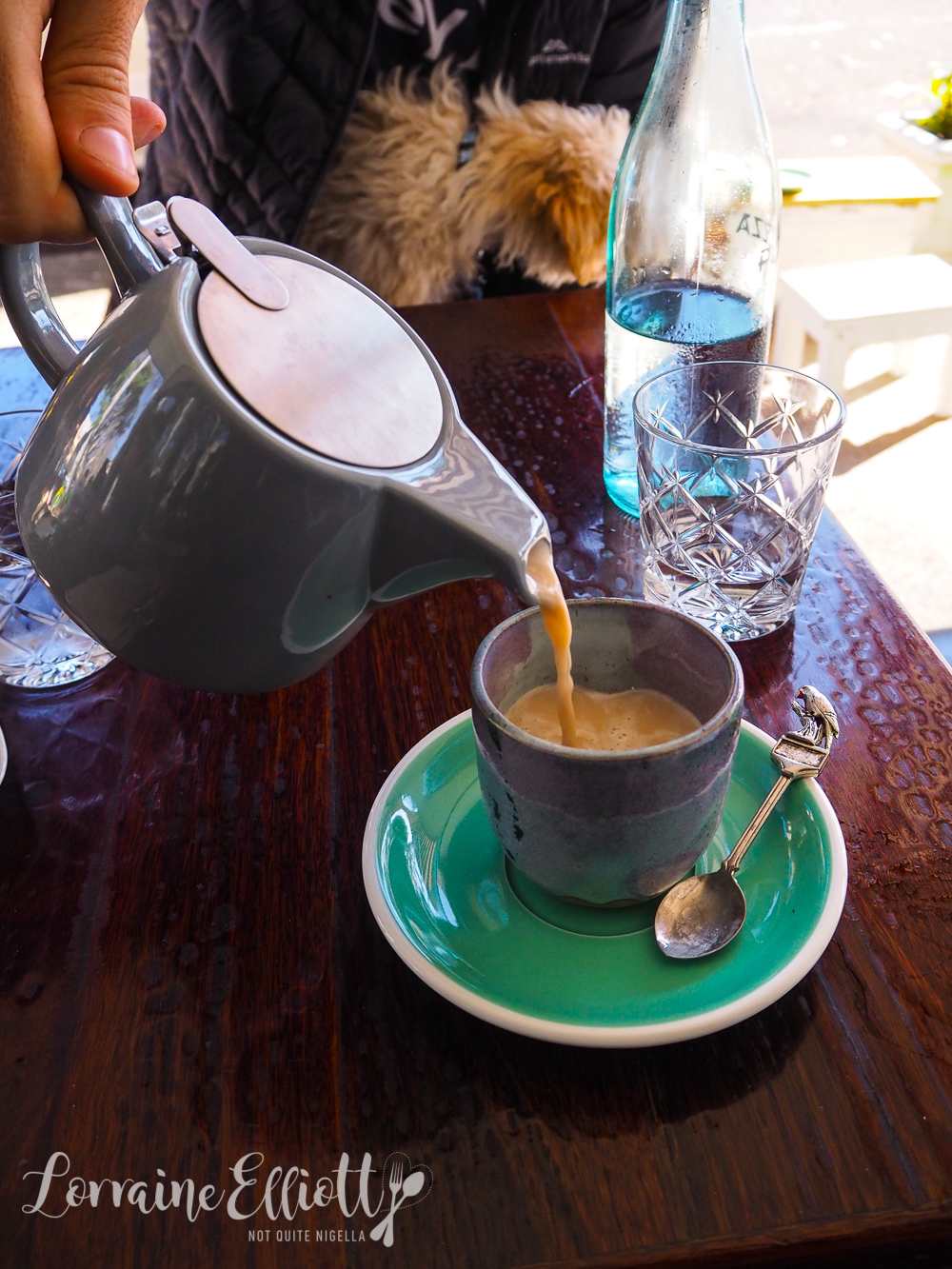 The sticky chai latte is hand blended in-house and is a perfect level of honey sweetness with a strong clove aroma reminding me of Christmas. It is made with Milk Lab almond milk. 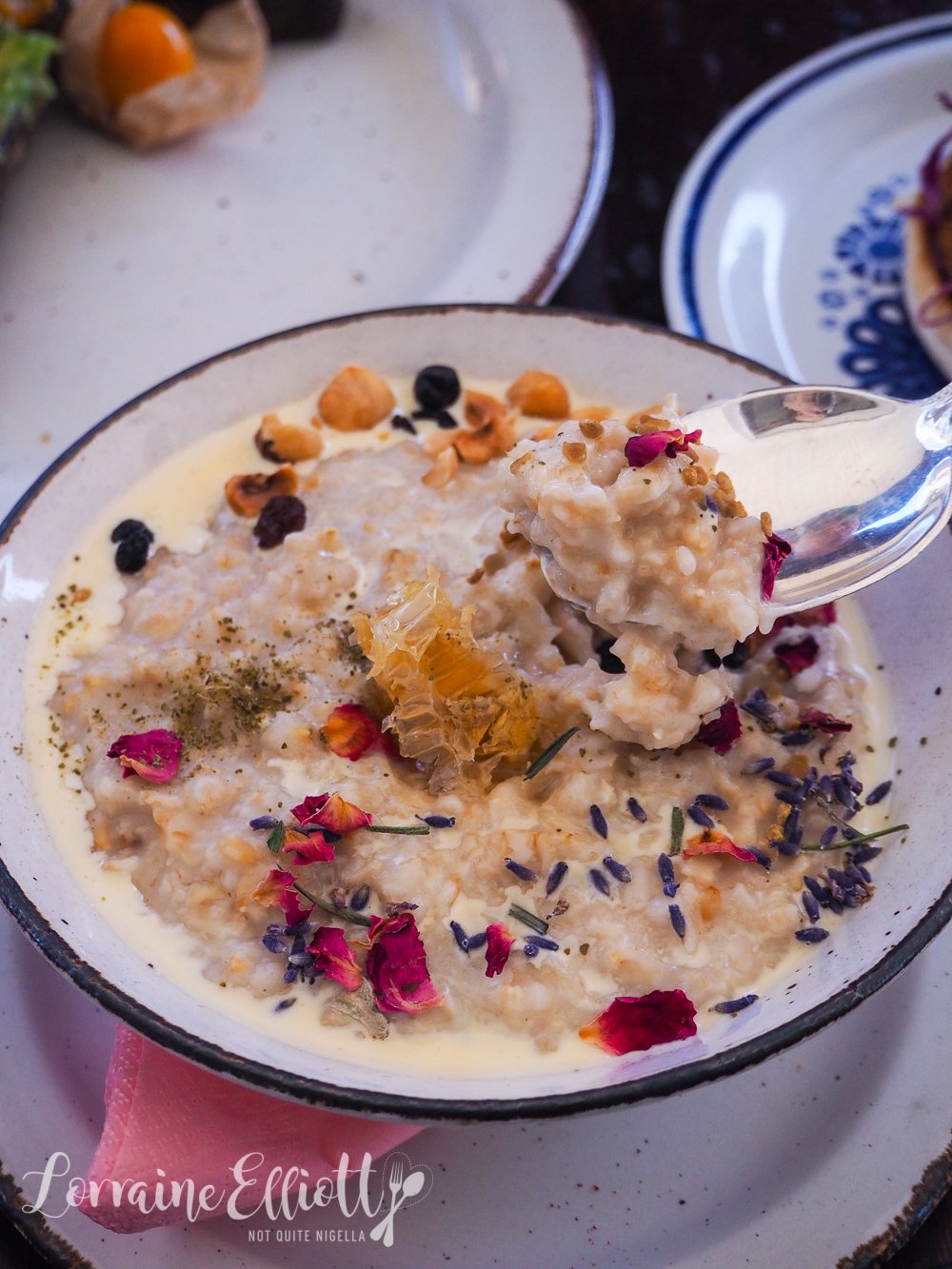 I love porridge but don't often order it because it's so easy to make at home but this one is really lovely with bee pollen, cultured butter, almonds and dried petals on top and a chunk of Katoomba honeycomb in the centre. 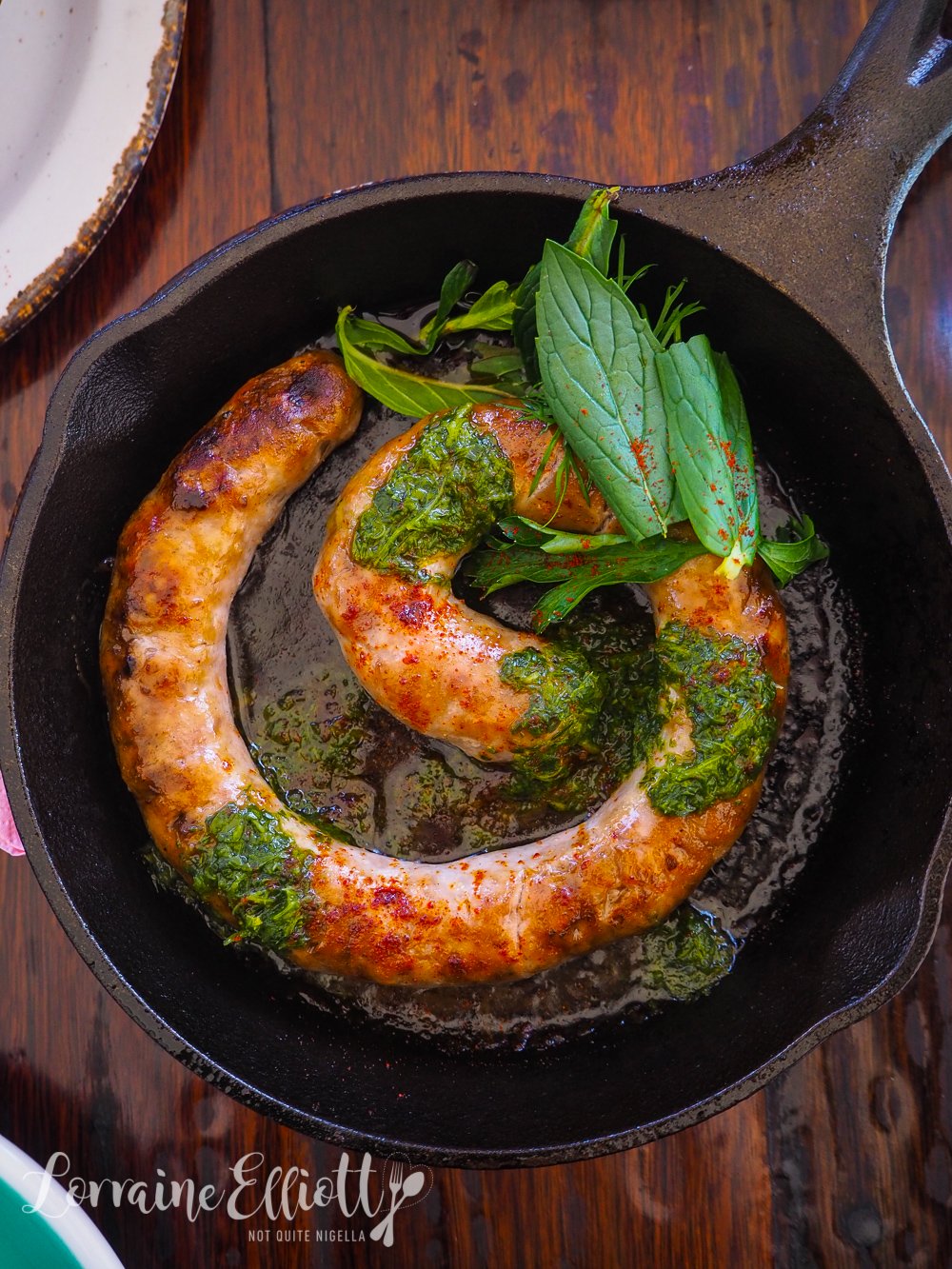 I think I thought this might be a pastry pinwheel but Romeo's pork and fennel sausage comes in a cast iron skillet and is topped with salsa verde and mint and is curled around like a pinwheel. 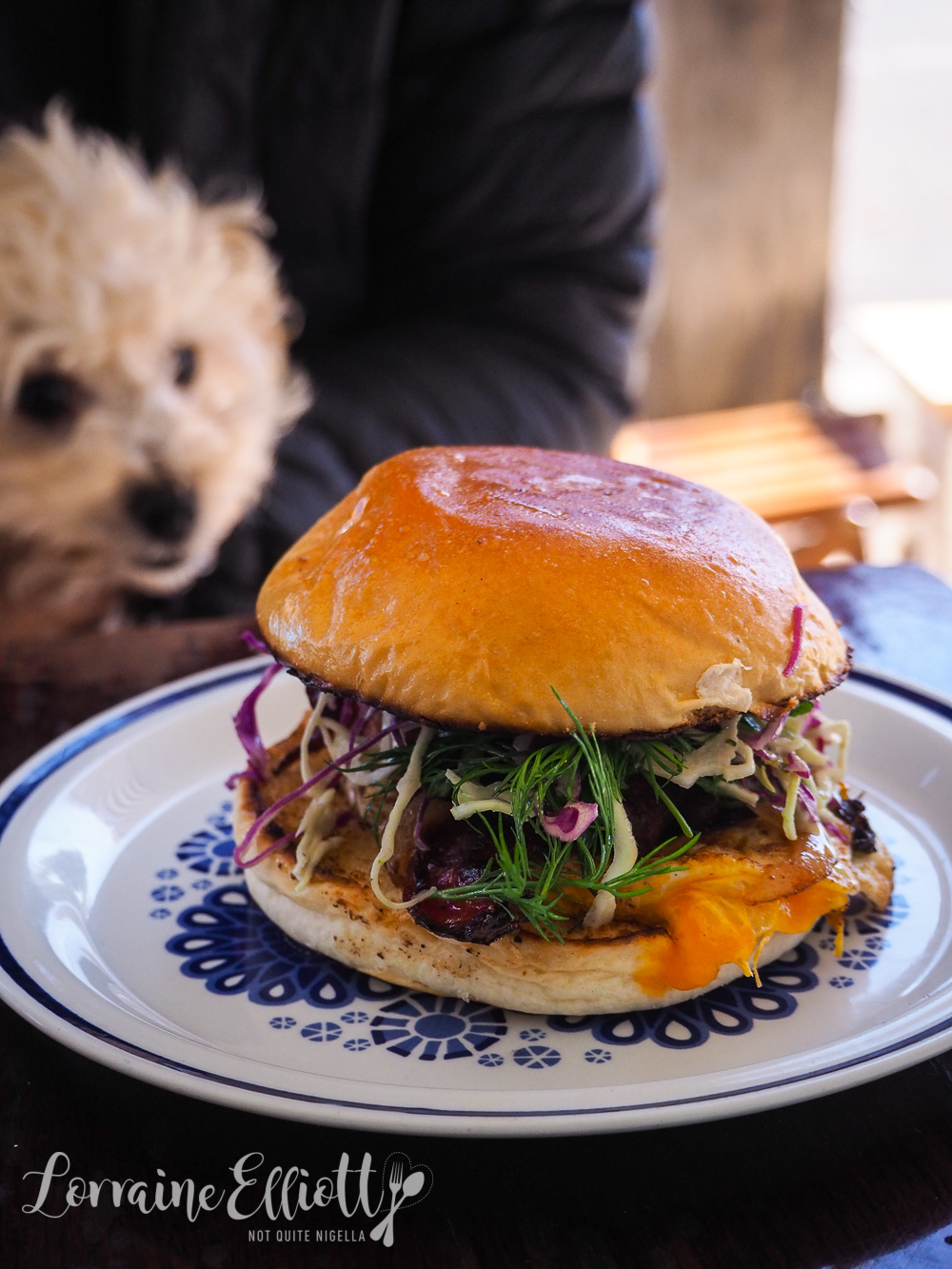 We also try a bacon and egg roll with buttermilk feta slaw and salsa verde which is good but needs a bit of tomato sauce or aioli to make it a bit more moist. We ask for some and it is juuust right. 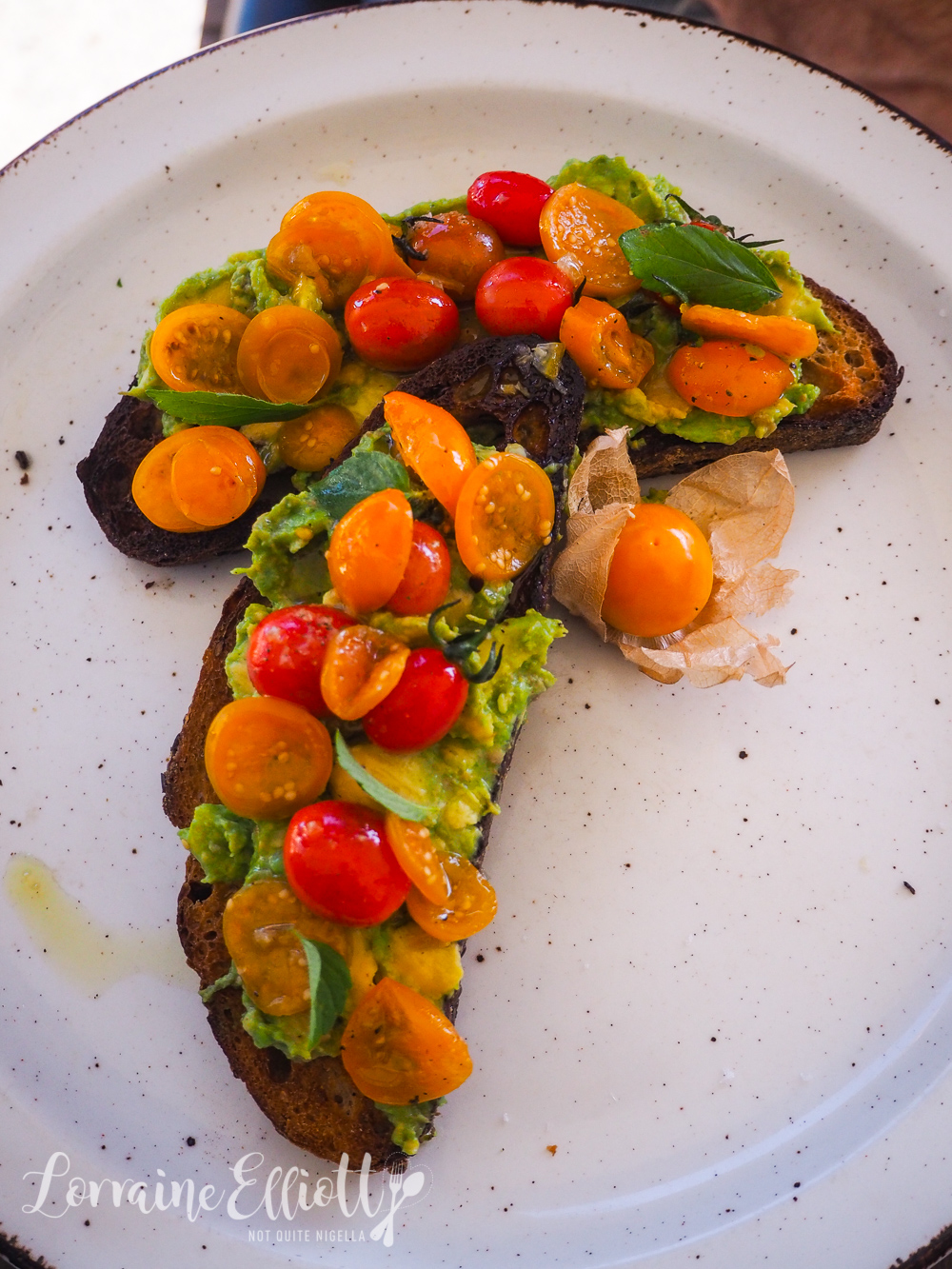 Given the bakery their signature item is the toast and there's a sweet and savoury version. We try the avocado toast with cultured butter, avocado, basil, finger limes and sweet cherry tomatoes on top. It's simple but tasty and the toast is thinly cut so that it is quite crunchy. 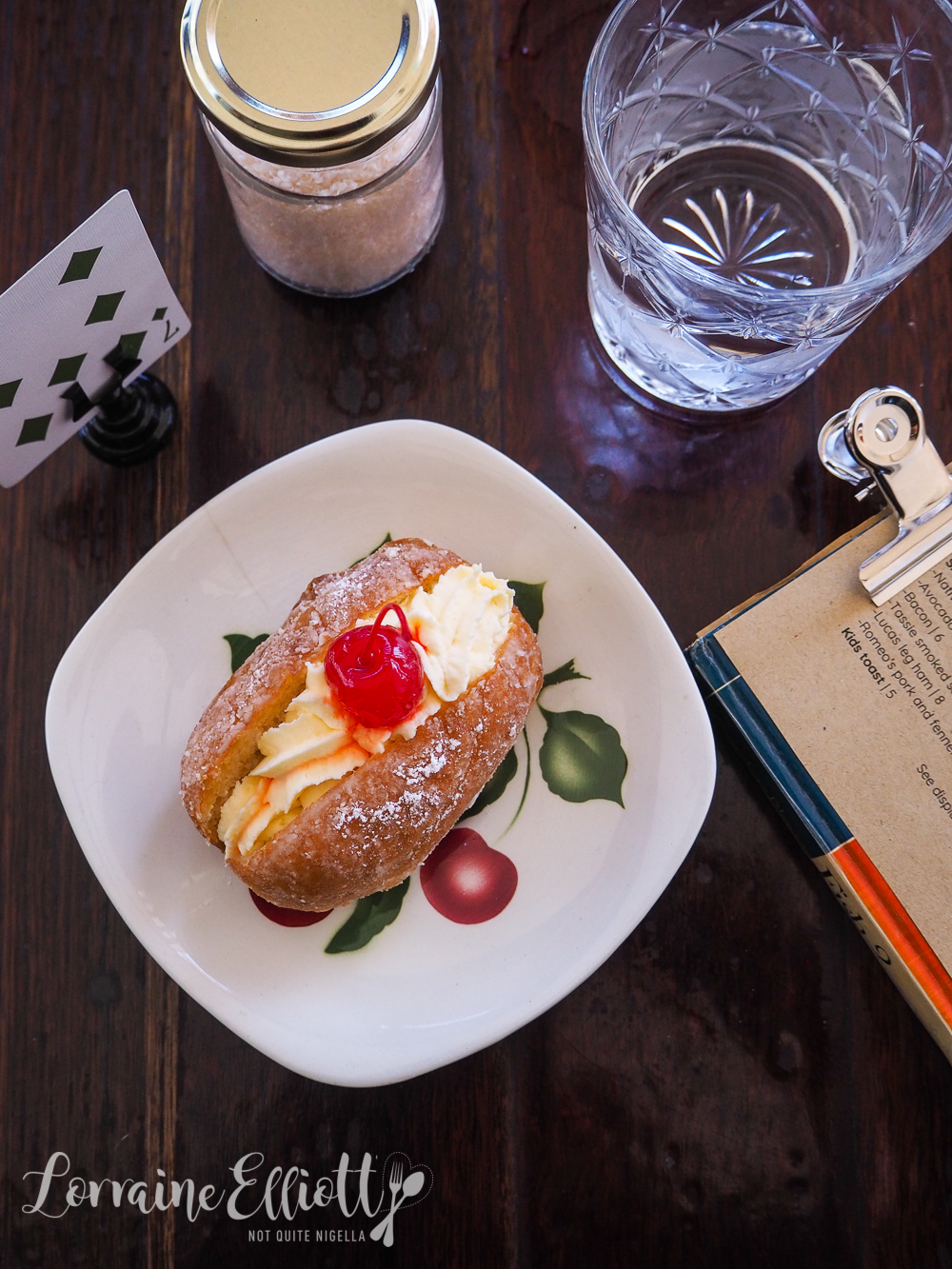 Then there are the cakes. I have to admit I tried quite a few because they all looked so unique and wholesome. Starting with the Cherry Moon cream filled donut topped with a maraschino cherry. The glazed donut is so downy soft and I love the real whipped cream inside. Simple but so good. 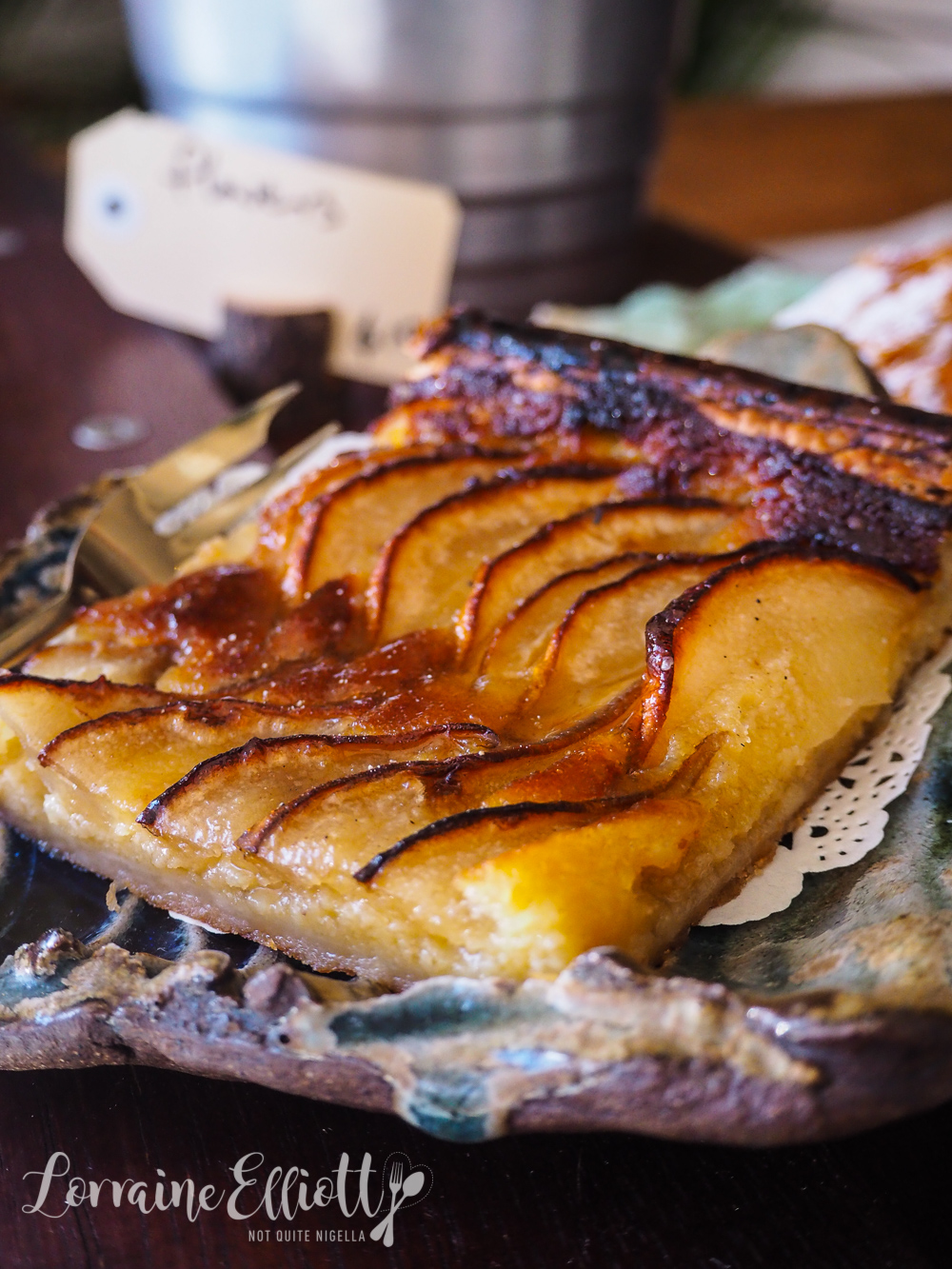 The pear tart comes as a square slice. There is a layer of frangipane between the thinly sliced fruit. 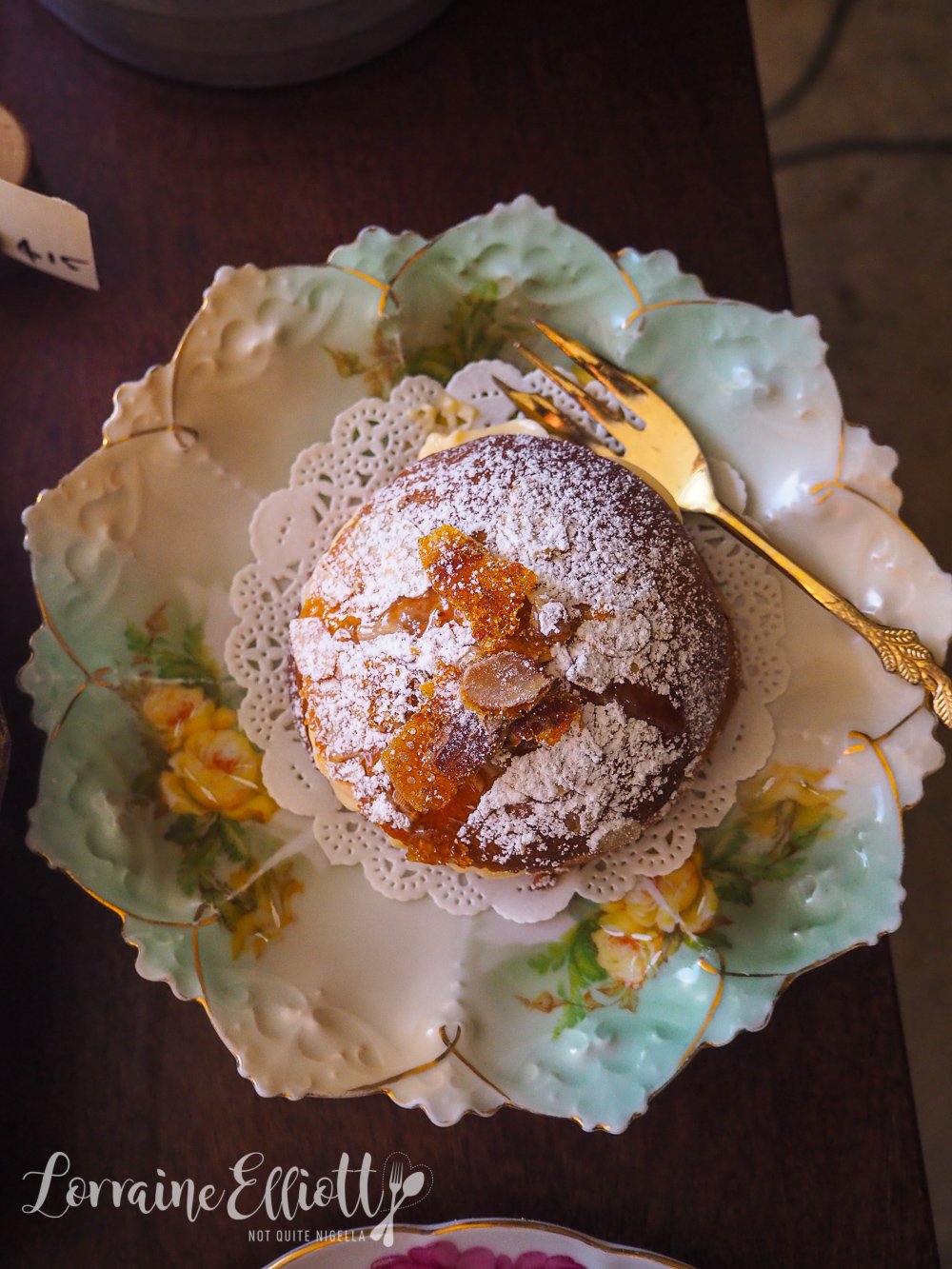 While the individual bienenstich cake is oozy vanilla custard in a soft bun topped with toffee and almonds for crunch. 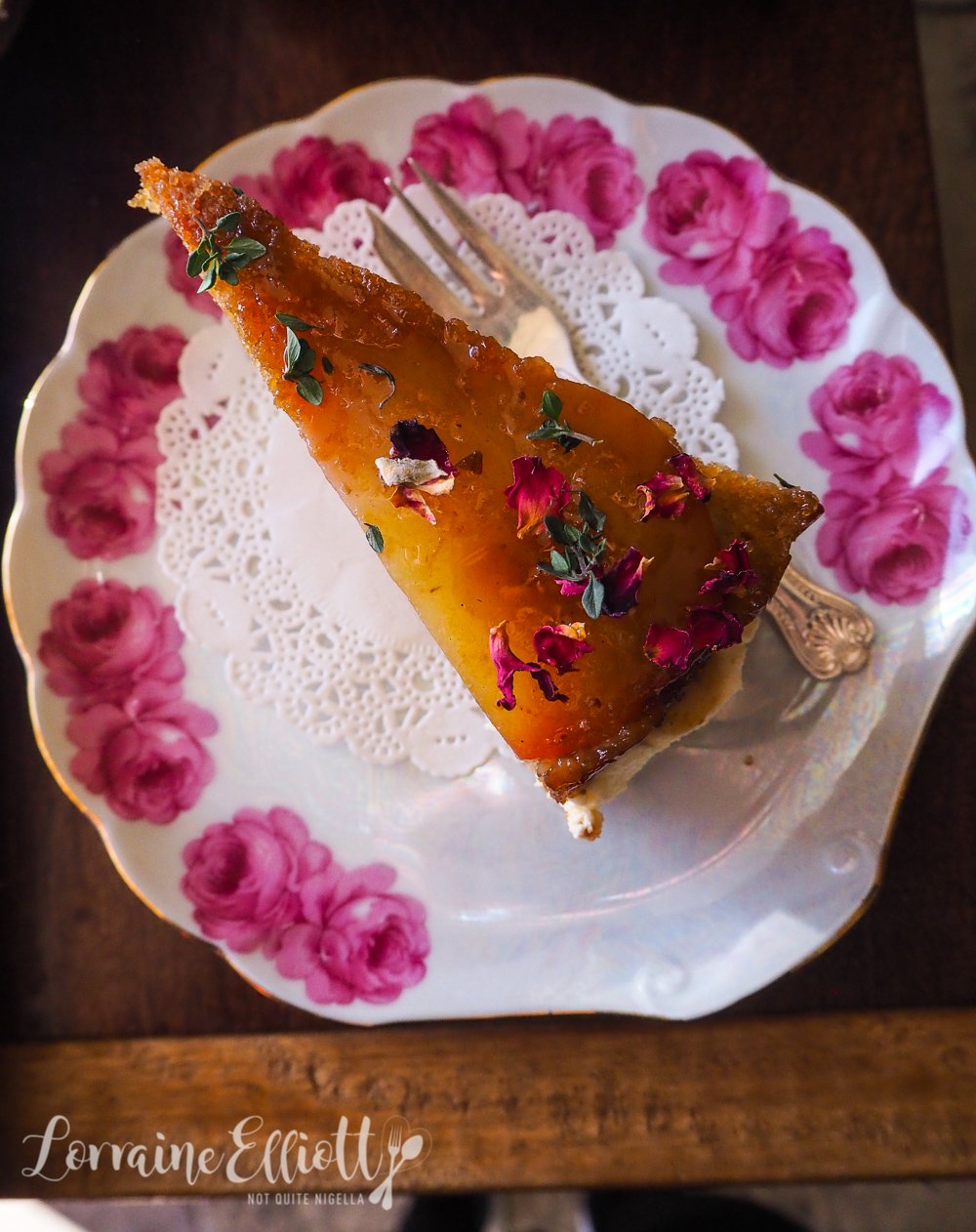 My favourite cake (apart from the cherry topped donut) is a luscious, glistening glazed upside-down number topped with pears and sprinkled with rose petals and lemon thyme. There's a middle layer of light cream cheese frosting. 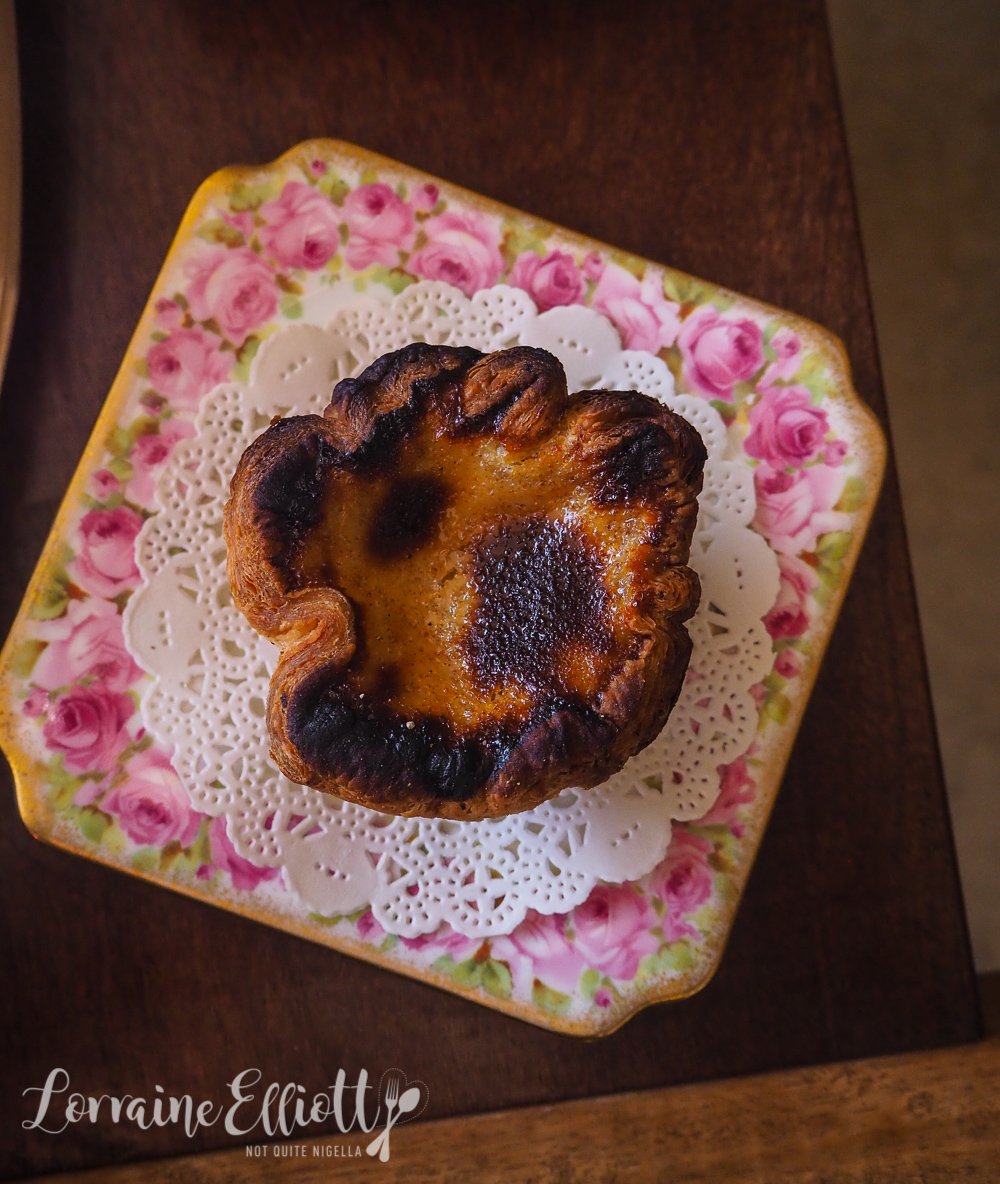 The lavender Portuguese tart has just enough lavender to make it interesting but not too much so that it reminds you of soap. The pastry is thick and layered with a thick custard filling. 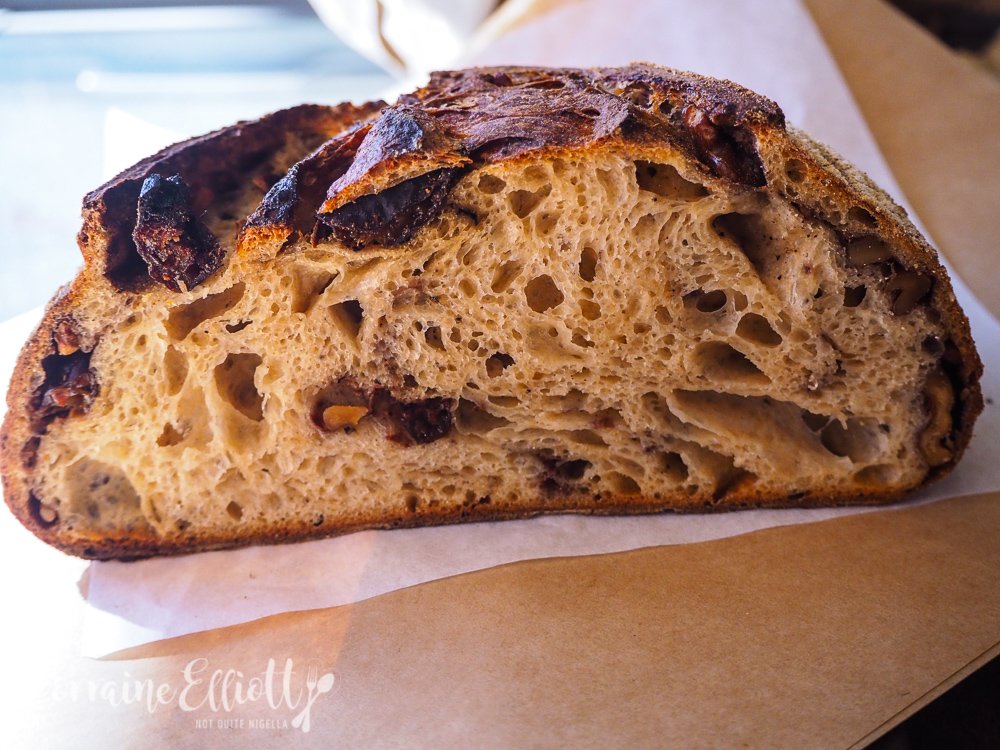 I also buy a loaf of the Pricklehill sugar plum, walnut and wattleseed bread made with wattleseeds Kimmy gathered from her time in Uluru. She pops in a sample of their cultured butter designed to go with the bread. It's heavenly and soft with a good distribution of nuts and fruit. 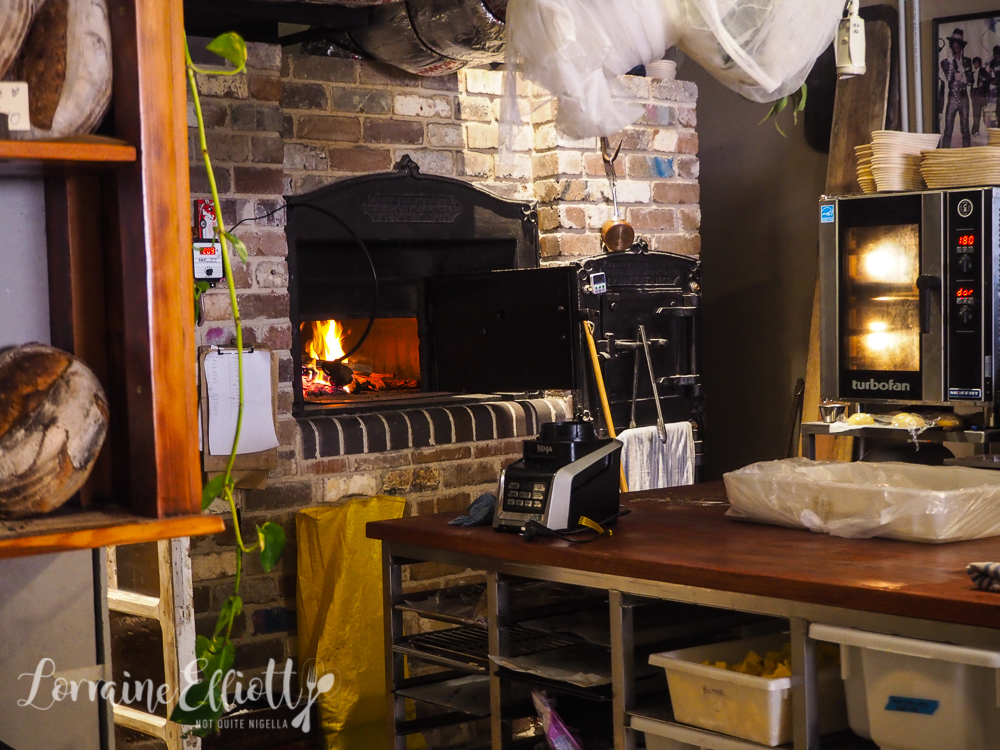 Kimmy also says proudly that the logo for Cherry Moon is by her grandmother Yvonne Gastmeier who put her through chef school and who also gave her the amazing vintage crockery. 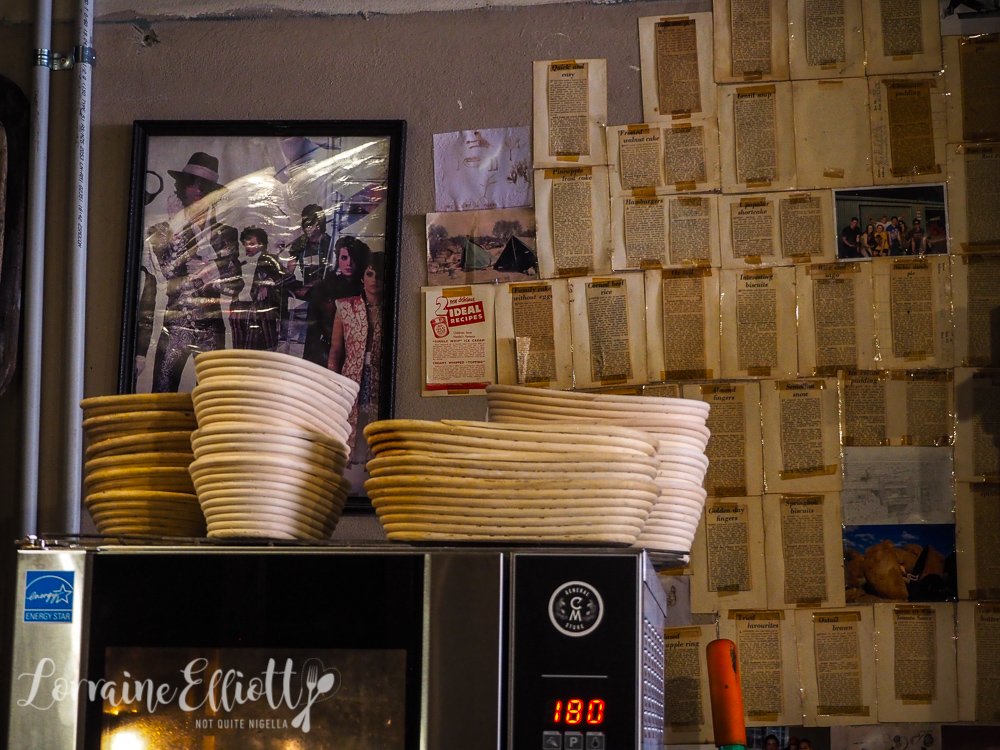 And speaking of the name, if you are a Prince fan as am I, the cafe is most definitely named after film "Under the Cherry Moon". The wood fired oven's name? Apollonia (after Prince's collaborator).

So tell me Dear Reader, what name would you give your oven? Do you have a favourite cafe in your suburb?