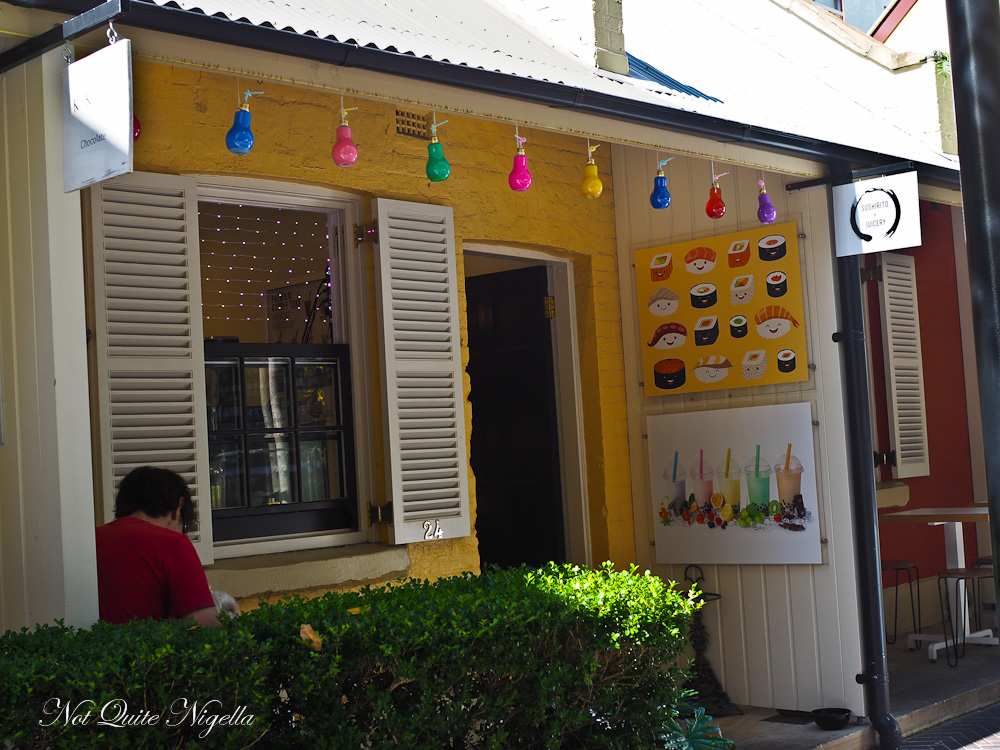 Sushirito? A sushi burrito? It's a post Cronut world where hybrid foods are being invented every day. On Chippendale's Kensington Street Sushirito Juicery makes sushi burritos and it's also a juice bar. So what are their sushi burritos like? 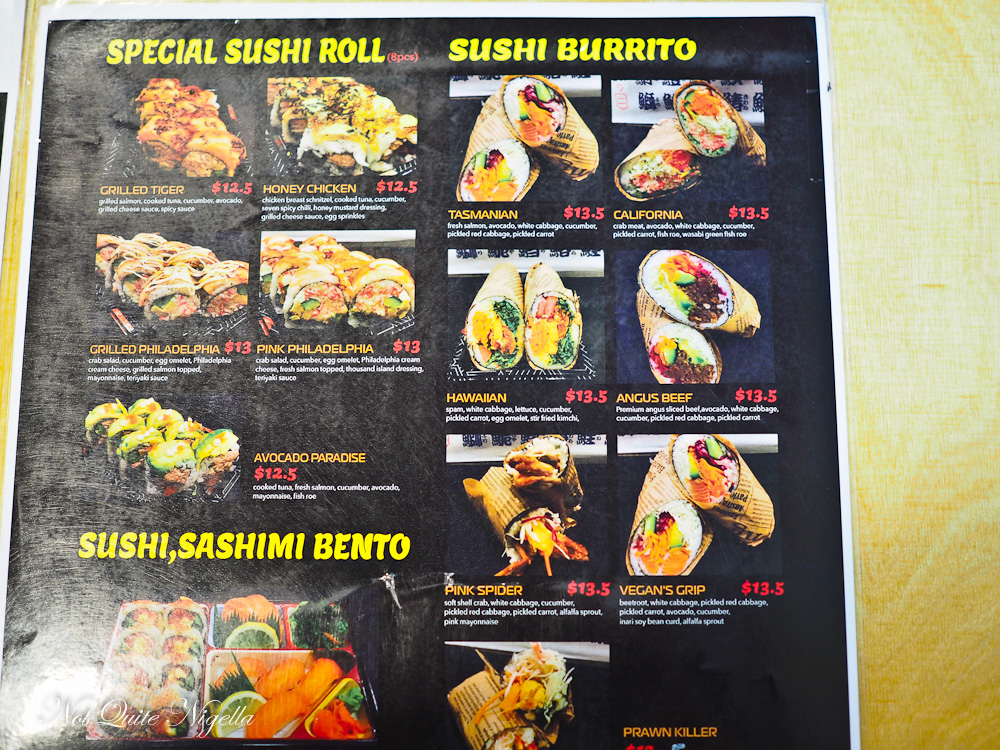 It's a small shopfront, the Kensington street side is where the drinks are made while the Spice Alley side is where you order the sushi burritos. And despite it saying juicebar it isn't really a fresh juice bar. They're more Asian style iced teas, shakes and bubble teas and when I return with a taro shake I'm greeted with a sad face from Mr NQN who was hoping for an actual juice. 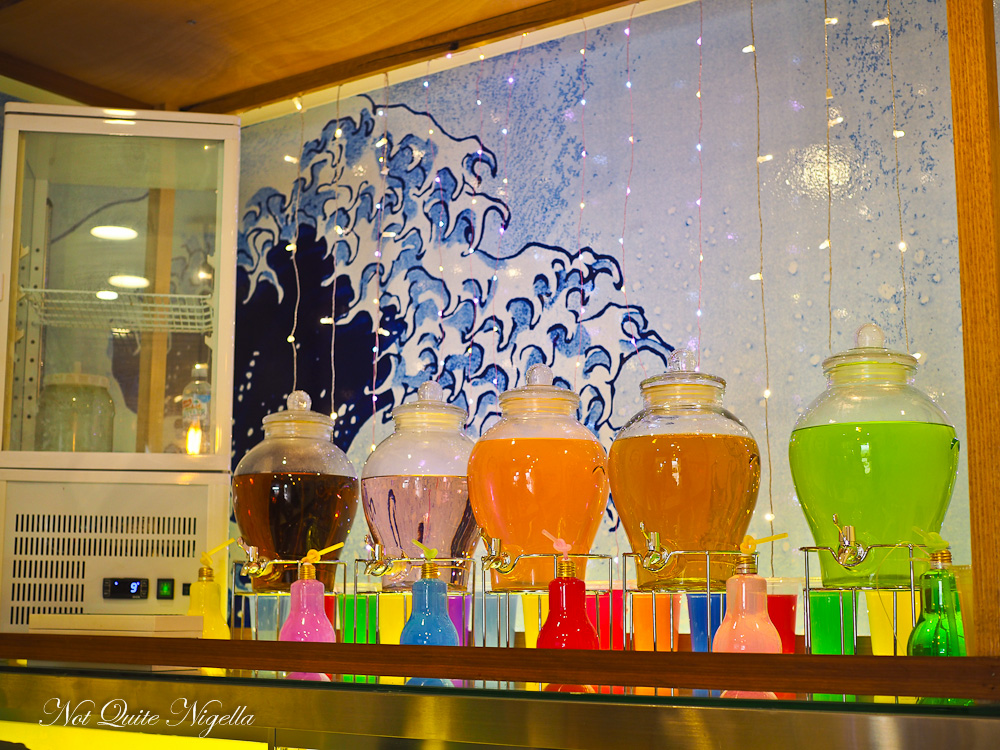 Each sushirito is $13.50 including the vegan one and there are seven fillings as well as more regular types of sushi rolls. The sushi burritos are actually quite sizeable and one is about the equivalent of 2.5-3 sushi rolls in terms of size and weight. 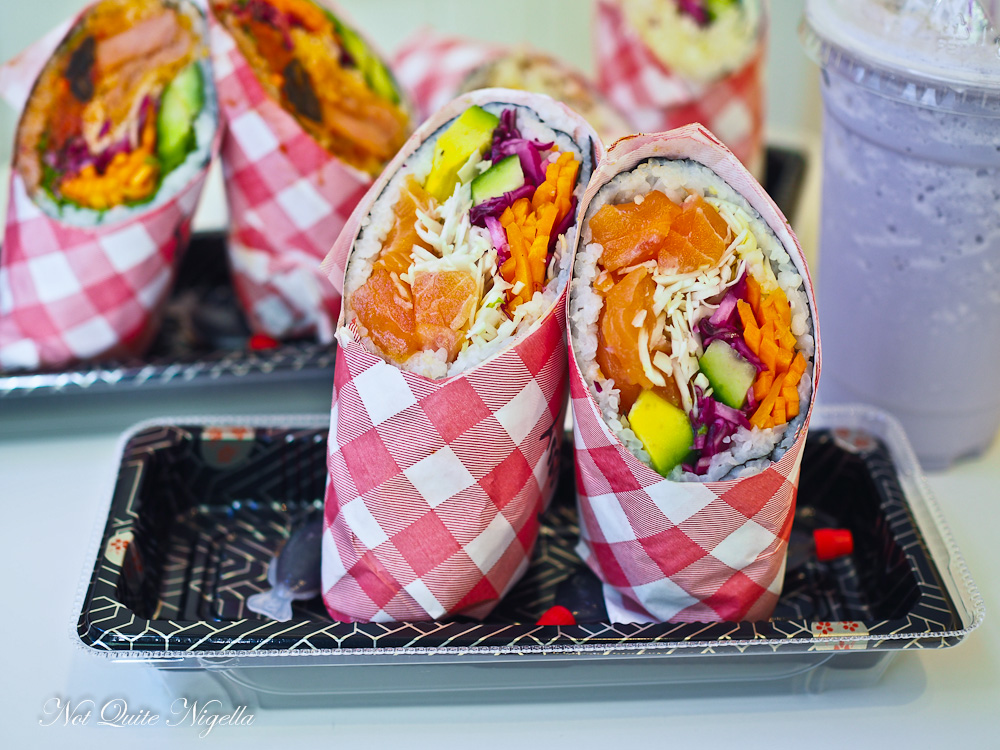 My first words of advice are to dispense with the notion of sushi burritos being sushi. While it is wrapped in rice and nori it isn't really like sushi. There's a lot of filling and it's mostly salad. So it's probably appealing for those looking for something healthy with the large amount of salad and modest amount of rice. 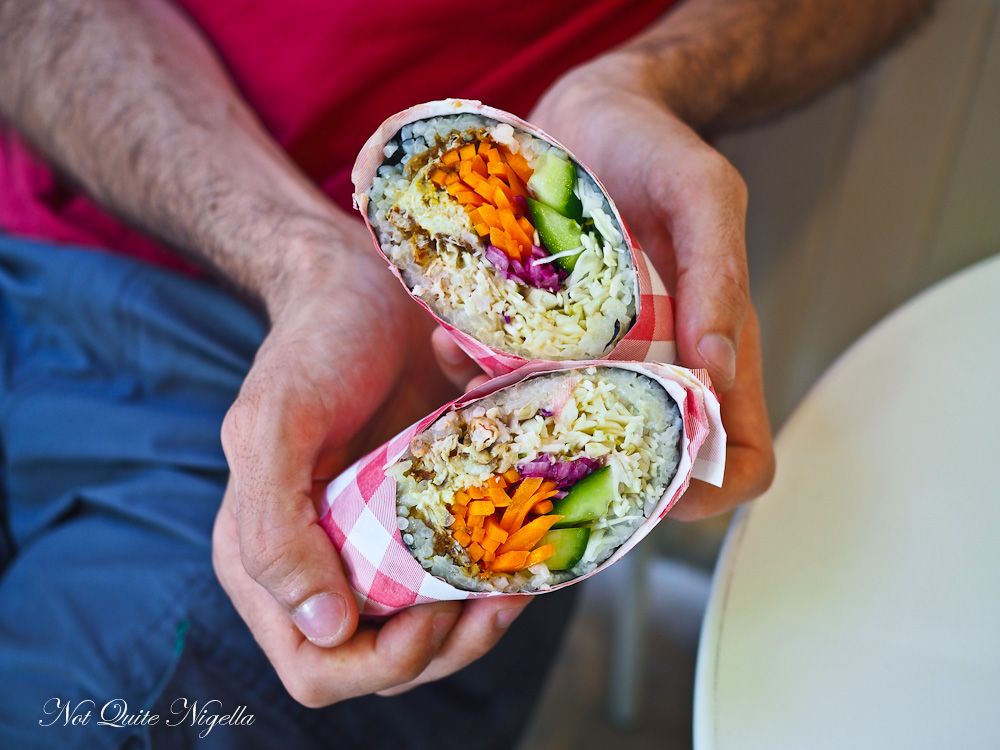 The pink crab sushirito is filled with deep fried soft shell crab, white cabbage, cucumber, pickled red cabbage, alfalfa sprouts and pink mayonnaise. There isn't a lot of soft shell crab in this, certainly it doesn't resemble the photo on the menu and I find it a bit messy to eat. Mr NQN gets the hang on this better than I do (maybe because he has a bigger mouth ;) ). 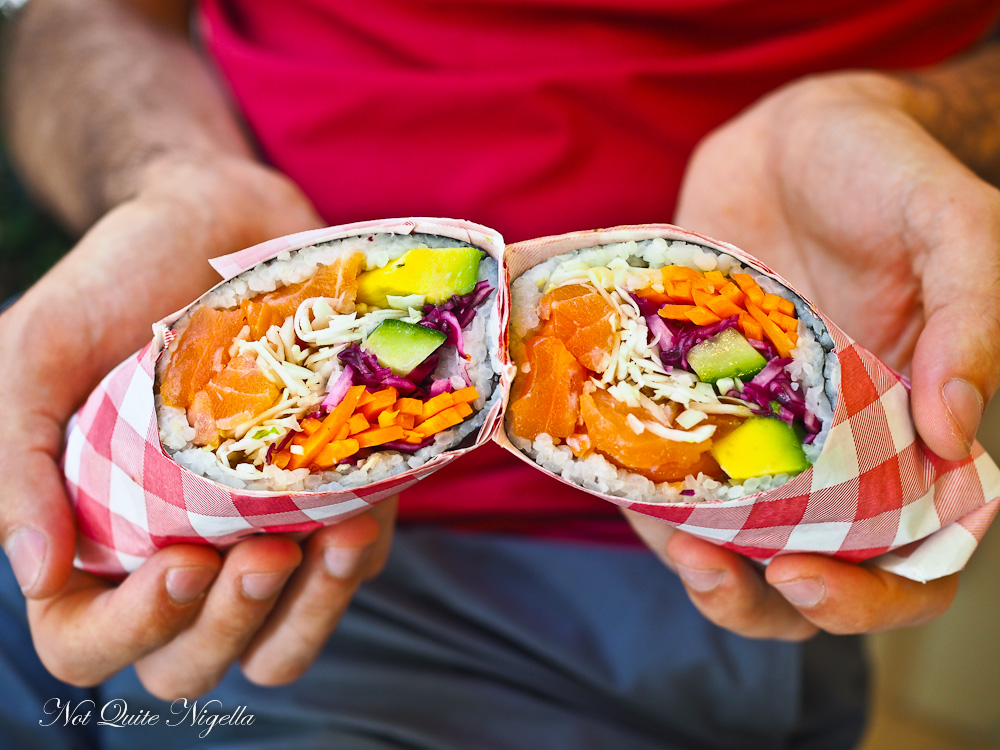 The Tasmanian sushirito is a bit dry. I think it needs mayonnaise. It is filled with sashimi salmon, avocado, white cabbage, cucumber, pickled red cabbage and pickled carrot. I mainly get a lot of white cabbage in this with a bit of salmon. 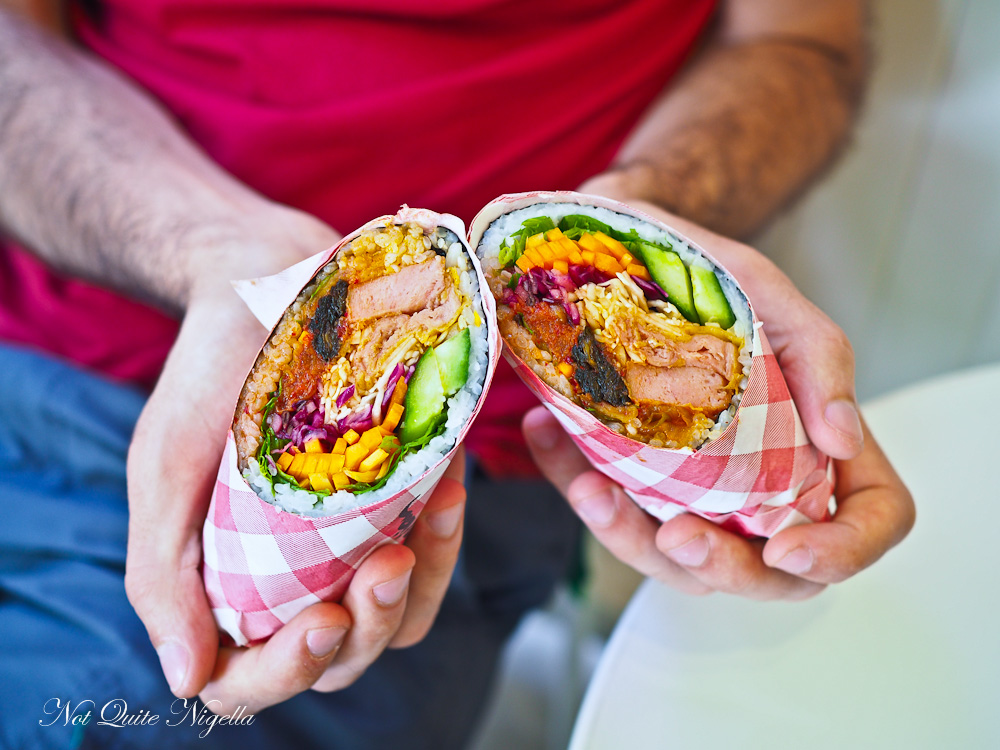 The one that we both liked is the Hawaiian one. If you've ever visited Hawaii you know how much they love their Spam musubis aka Spam on sushi rice. There's Spam, white cabbage, lettuce, cucumber, pickled carrot, egg omelette and stir fried kimchi. The kimchi adds a nice amount of spice to it and this feels a bit more balanced than the others that mainly taste of salad.

There's also Korean shaved ice desserts but the sushiritos pack quite a meal and there's no room for dessert. Oh the shame!

So tell me Dear Reader, would you try a sushirito? What do you think of hybrid foods? 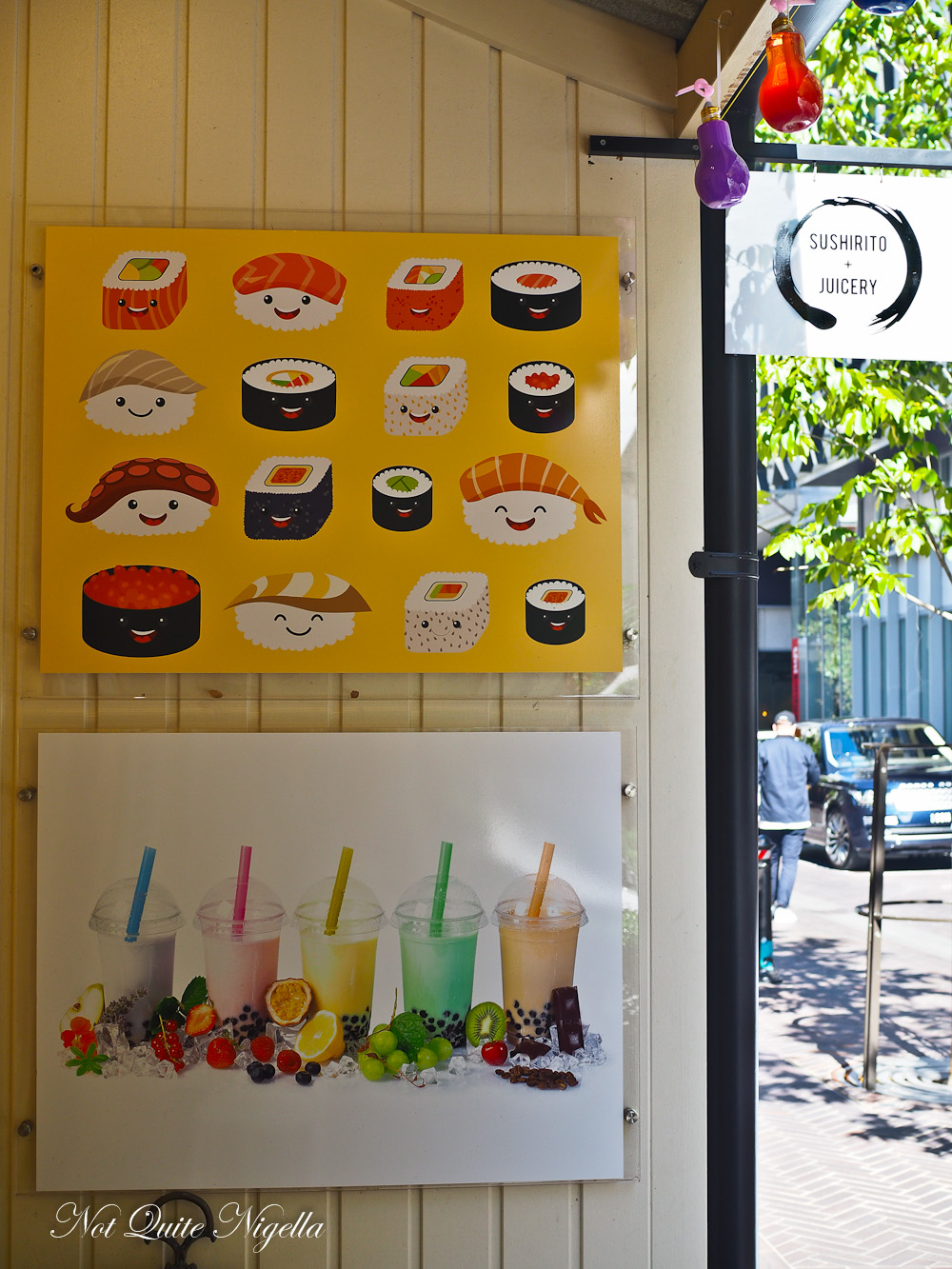